Zach and I worked hard on this party and I want to remember every little detail of it! Instead of taking the time in this post to describe how I made each thing or where I bought stuff from or recipes I used, you can click on any links and they will take you to posts on my sister blog where I go into more details about that kind of stuff!

The party theme was monkeys and I wanted to match Kye’s shirt so I went with primary colors (red, yellow, brown, and blue) Here are the noise makers and party hats (out of everything I made the party hats turned out the best I think!

I got the stickers from Etsy. Here are some similar stickers! 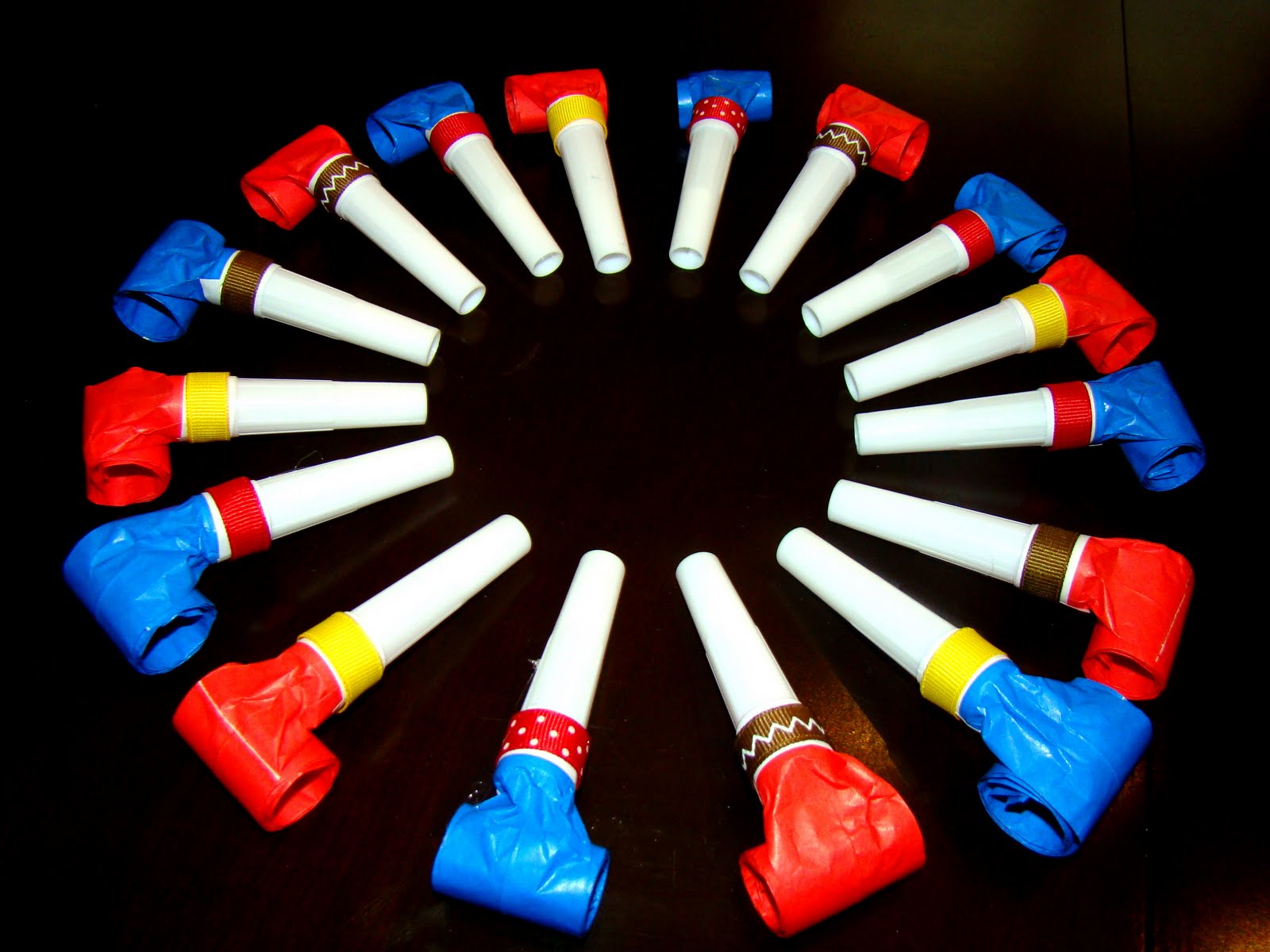 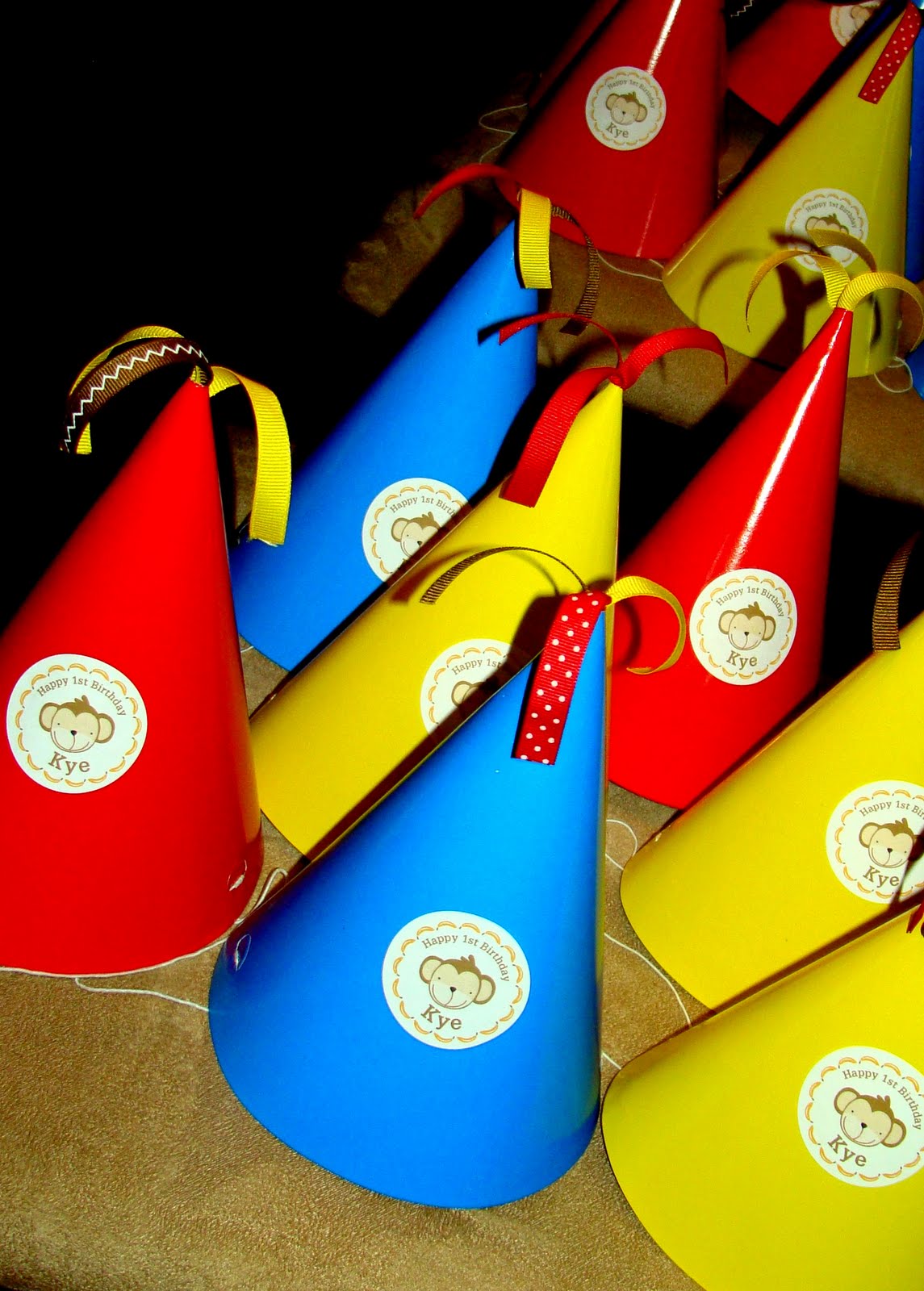 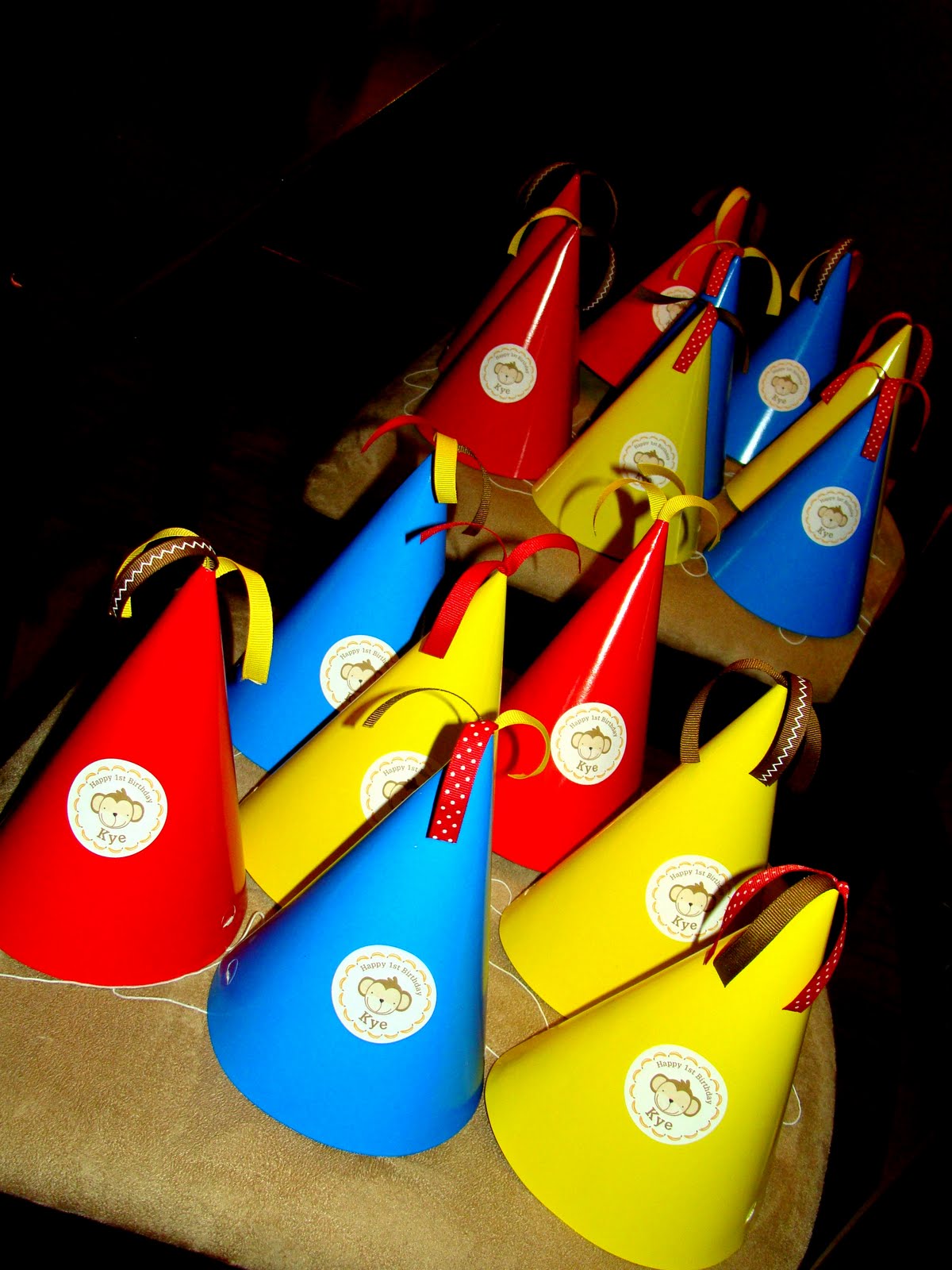 Instead of making goodie bags we decided to give out bananas! Isn’t that the cutest idea?

I’m not creative at all but I thought of the idea myself!

And they make very cheap favors as I bought almost 30 of them for around $10. I also got the tags made up from the same Etsy shop as the stickers on the hats! 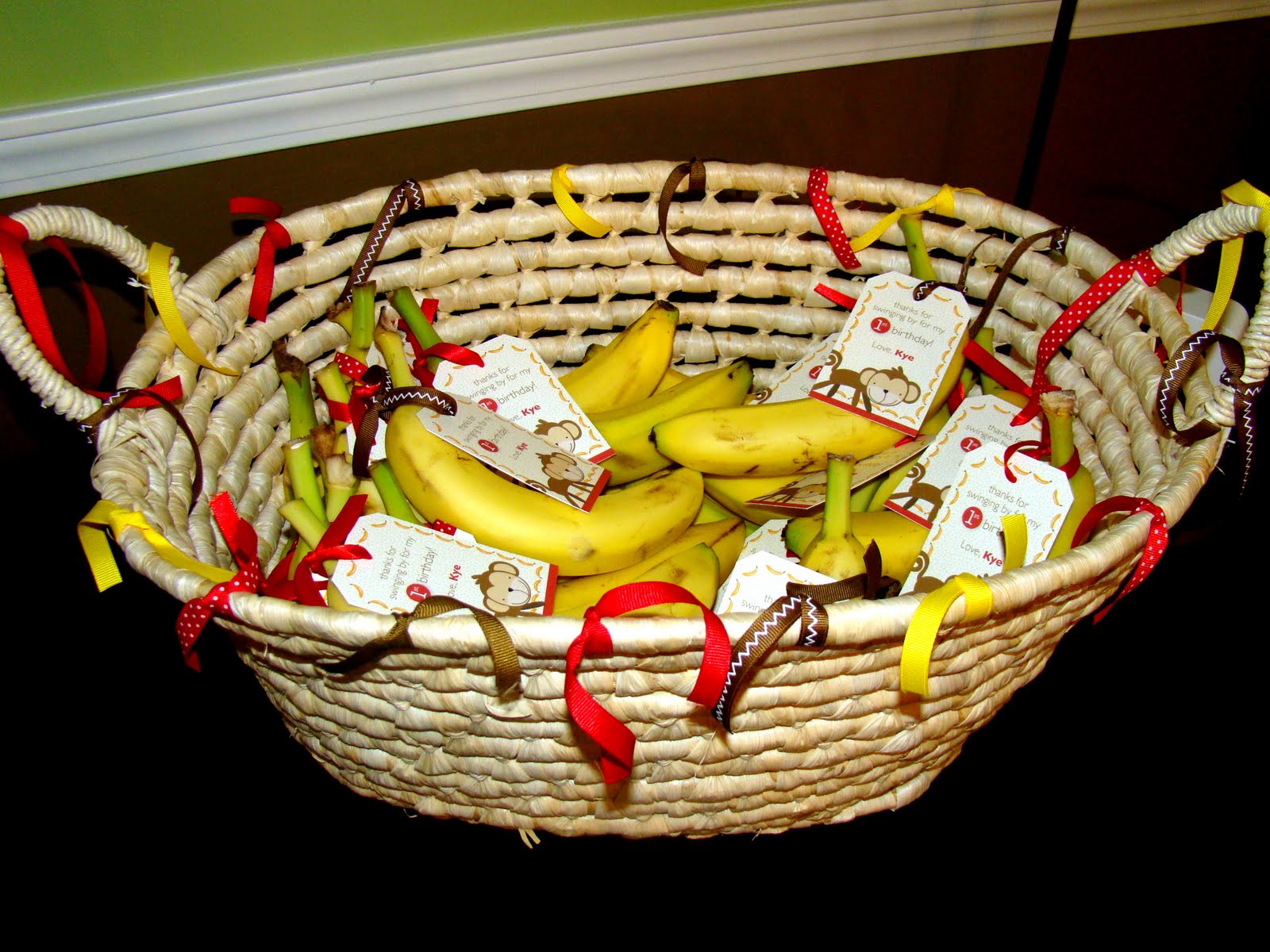 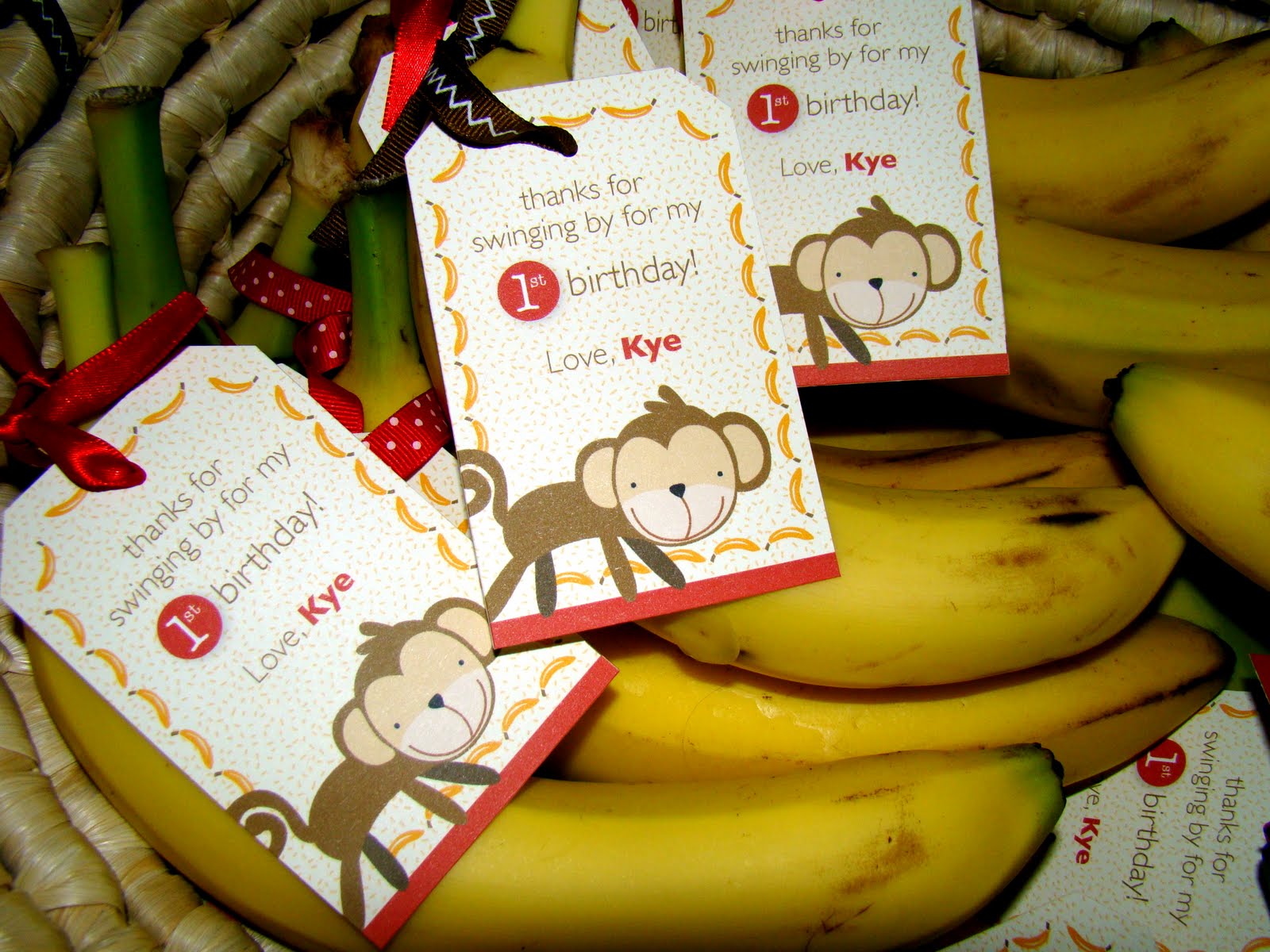 I was pumped to make Kye’s Happy Birthday banner as well as his high chair banner with his name on it.

Of course I’m sure you remember the nightmare nap day when Robyn basically cut out all the paper for the banners for me!

But I still did the letters, picked out the papers, and strung it all together so I can get a little credit for them right? I don’t even think any of the guests realized I made them!

The Happy Birthday one was great because it helped draw people into the living room (they always tend to stick near the food haha) but the one of his name was great too because it showed up in the pictures of him eating the cake (post to come!)

Seriously this was a VERY easy project that turned out pretty professional looking! 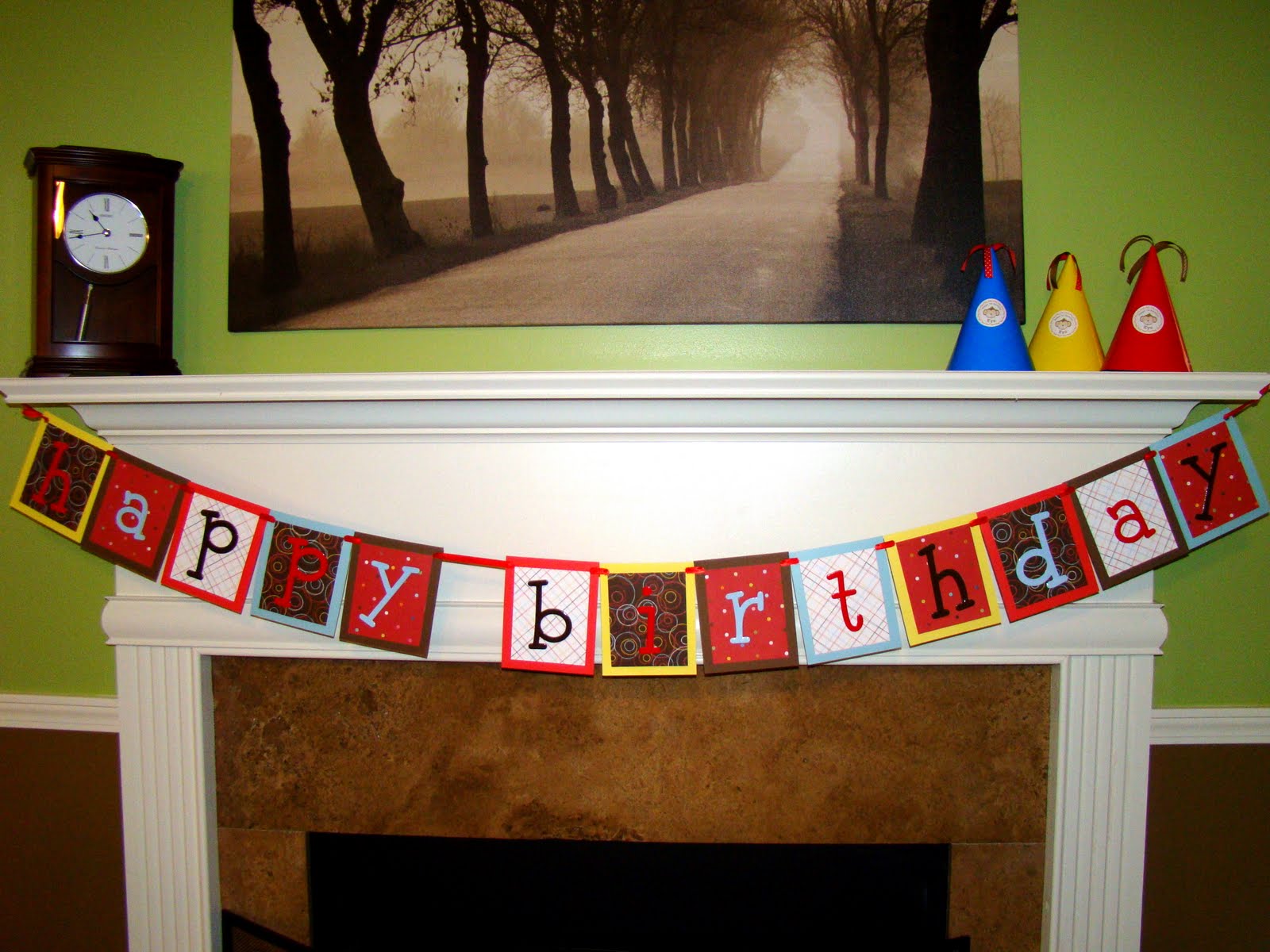 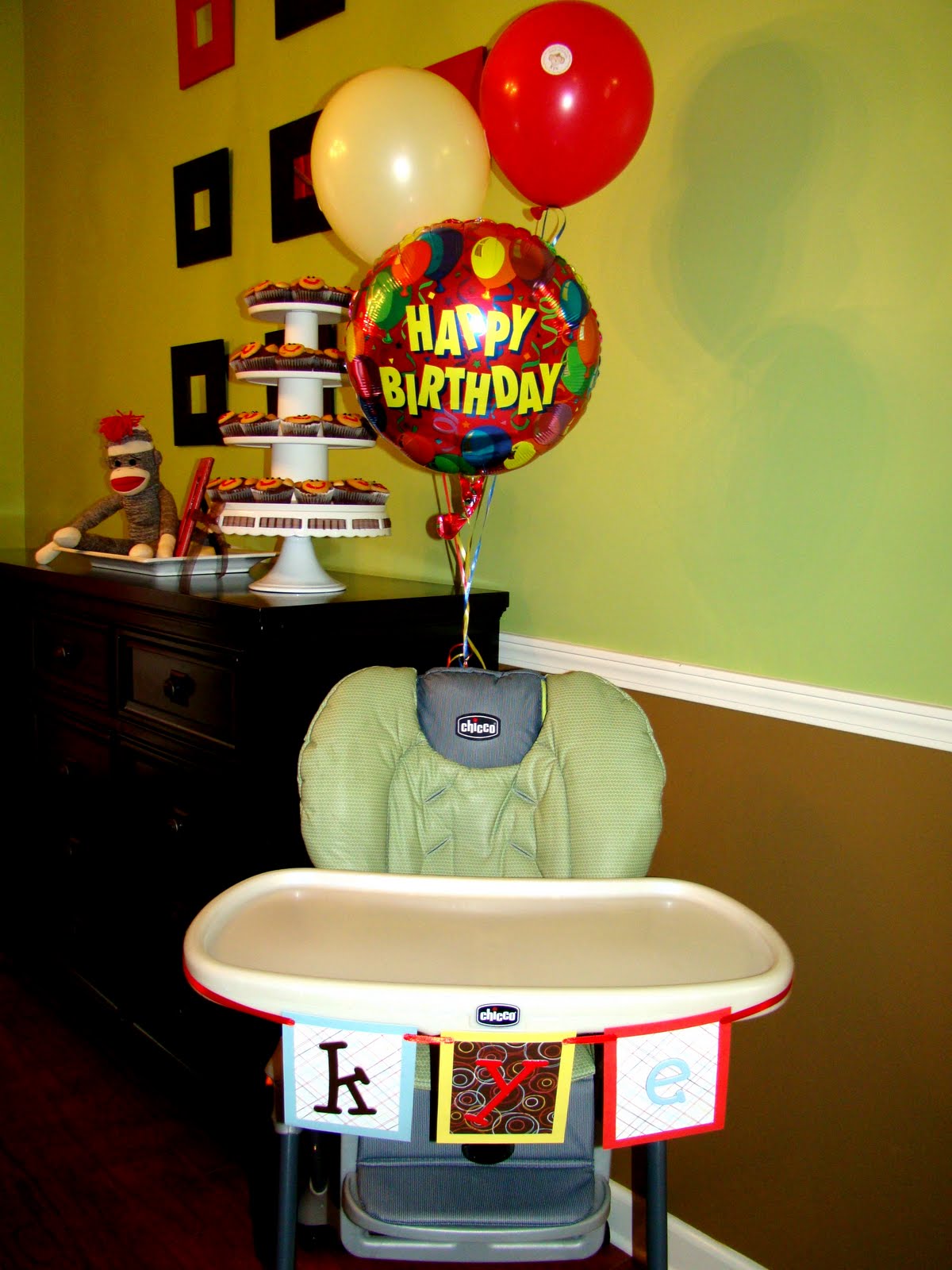 I cannot, however, take credit for the ADORABLE smash cake my mom made!

She made two of them to make sure there was a backup just in case so Zach and I ended up eating the extra one. Not only were they super cute but they tasted AMAZING! Can I have a monkey cake for my next birthday? 🙂 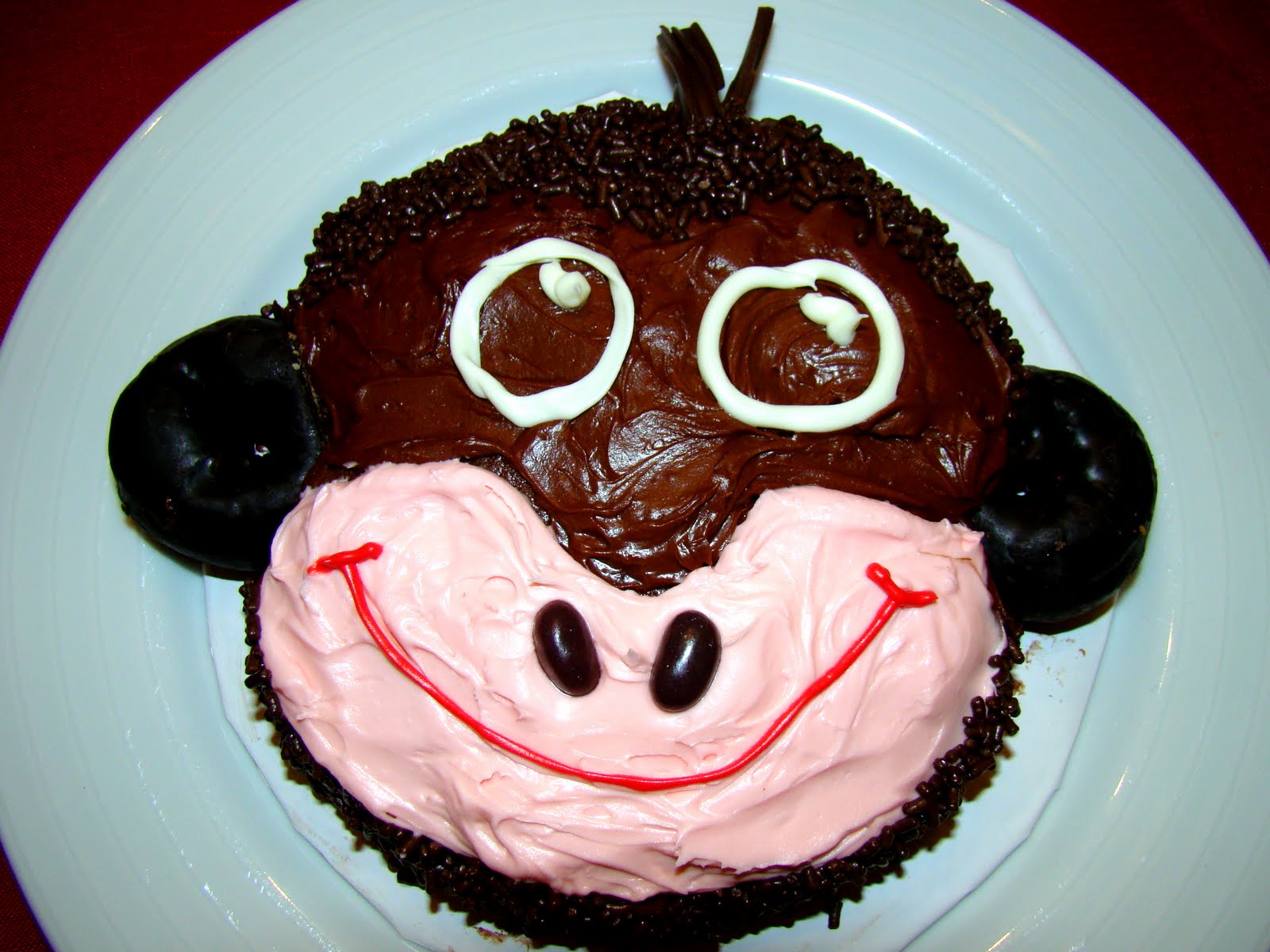 I CAN take credit for the Monkey Cupcakes though! I wasn’t sure how many to make so I did 48 just to make sure we had enough and we ended up with over 20 left over.

So sad for how hard I worked but they looked cute for the party and everyone said they were yummy (even the people who ate the left over ones at church, one kid ate THREE during our 9:30 bible study class…yuck!).

Special thanks to Ashley Troutman for the cute cupcake stand! I’ve borrowed it for three events now and Zach has finally said I can just buy one of my own! Yay! 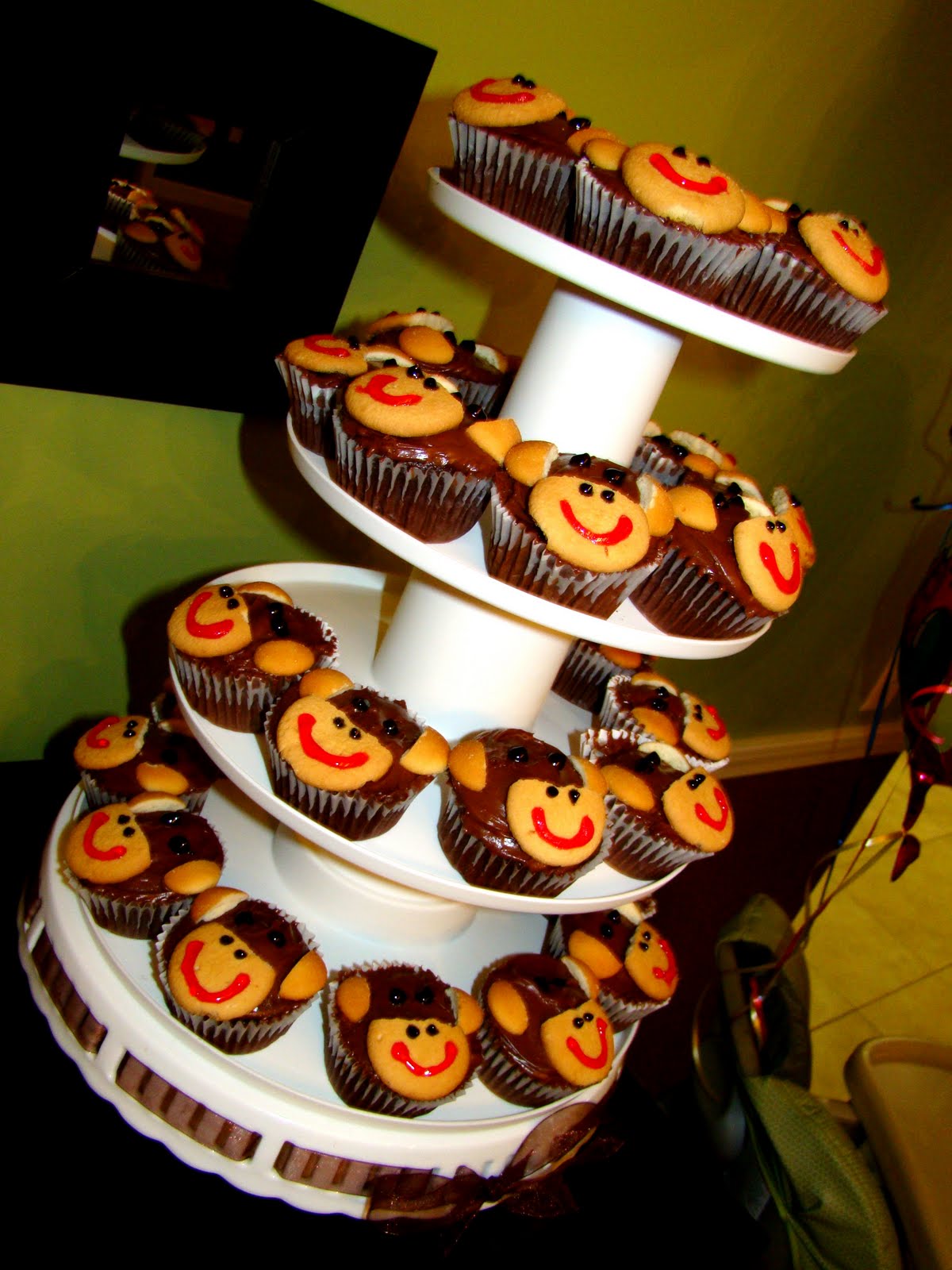 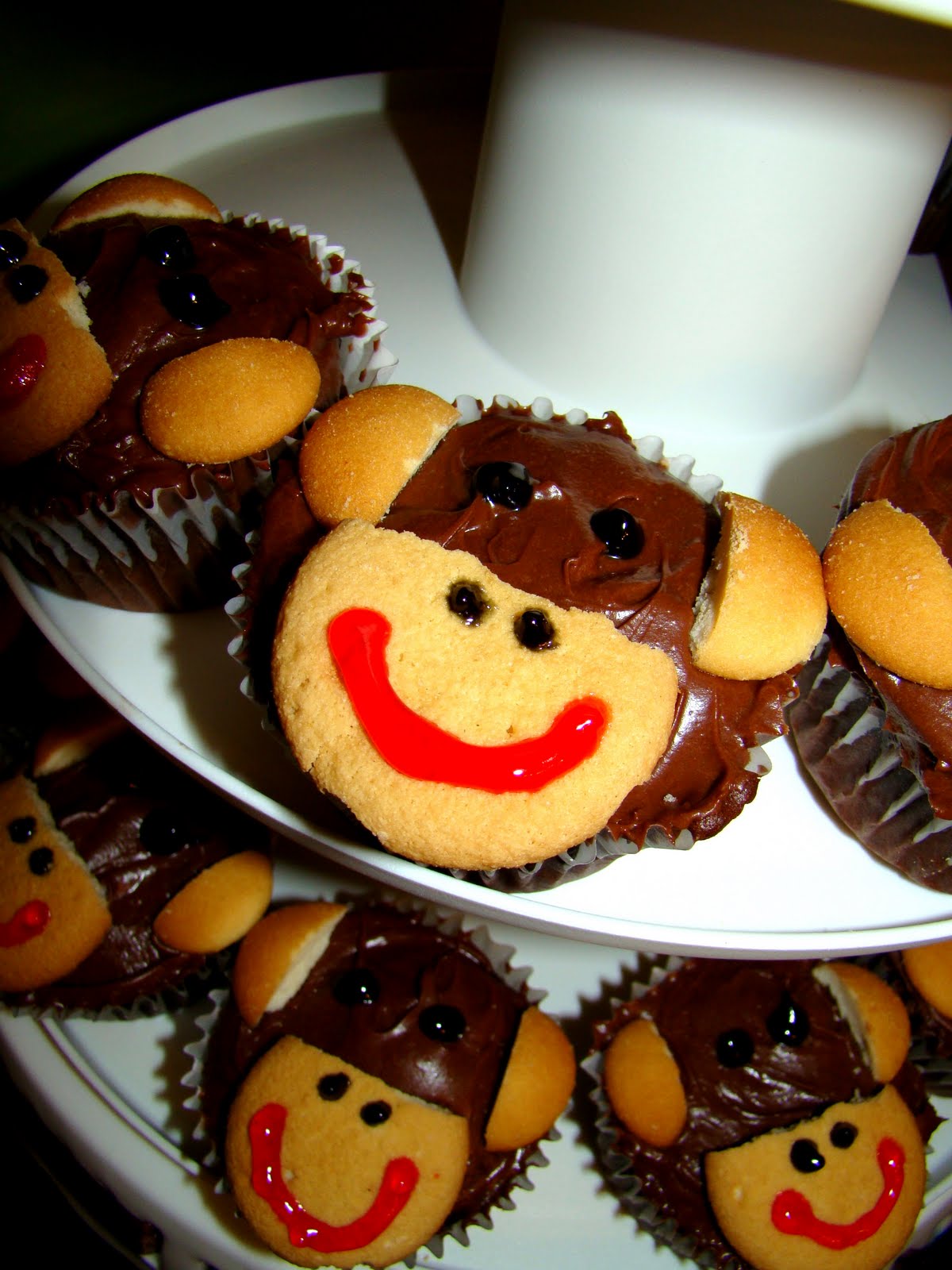 I worked my BUTT off on the slide-show that played on our tv throughout the party (I’ll be posting the slide-show for EVERYONE to see on Kye’s actual birthday so get excited haha).

While I think people could tell that the slide-show was a lot of work, I don’t know that too many people looked through the baby book.

This took me about 5 hours to complete in time for the party and it was a pain! It made me thankful over and over again that I have decided not to scrapbook anymore and do blog books instead 🙂 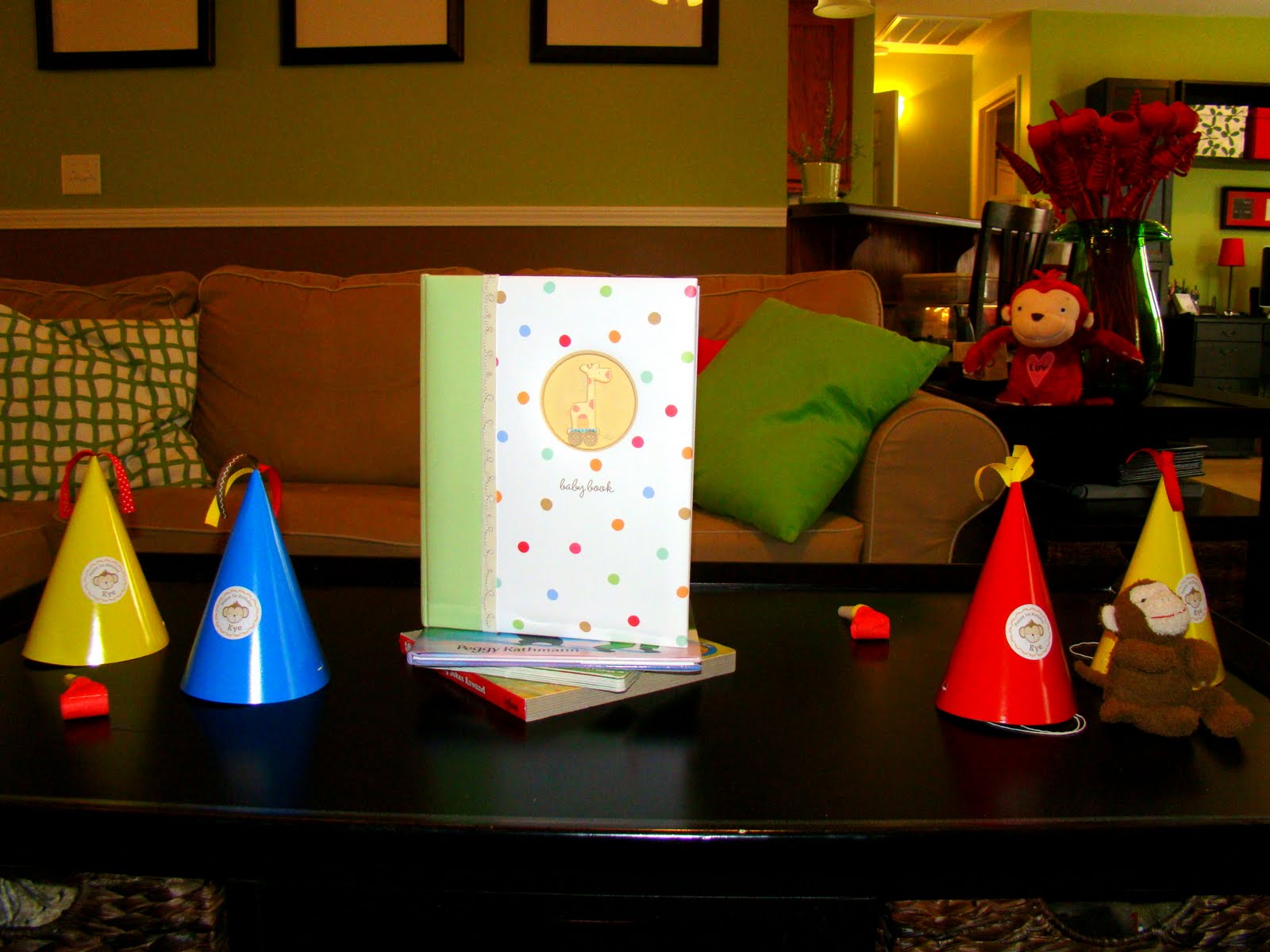 The dining room table was the spotlight of the party and I think it looked really cute! I framed a picture of Kye in his monkey shirt and also framed the picture of Kye with the REAL monkey from Cancun (I mean that was too awesome not to put out somehow!).

We used Kye’s monkey stuffed animals around the house as decorations as well as his monkey themed books and all the noisemakers and party hats.

My mom (such a school teacher! I LOVE it!) also came up with the idea to make a vine to go along with the theme. Zach and I worked hard on it and it’s hilarious how SO many people didn’t even notice it haha How can you miss this?!? 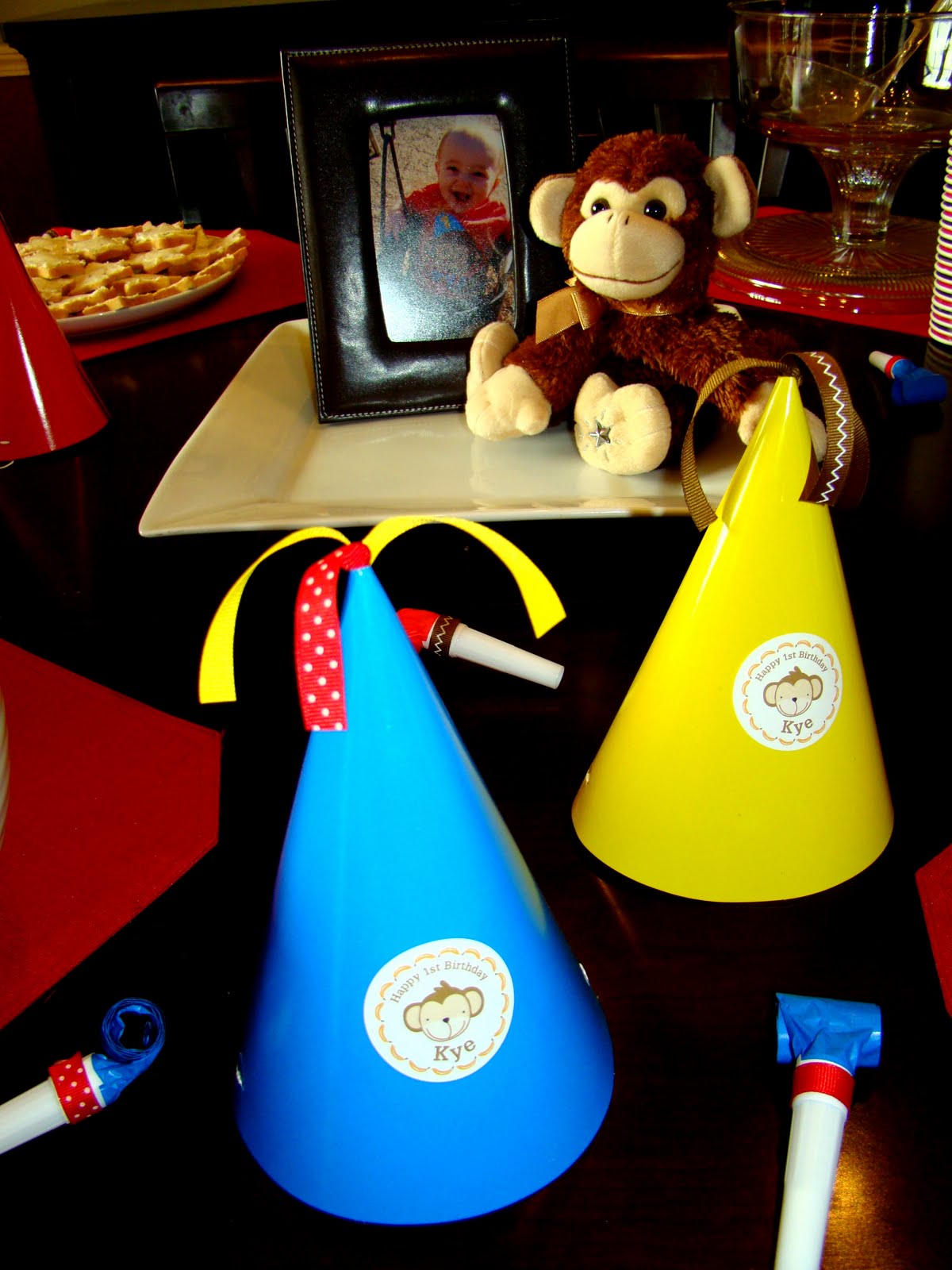 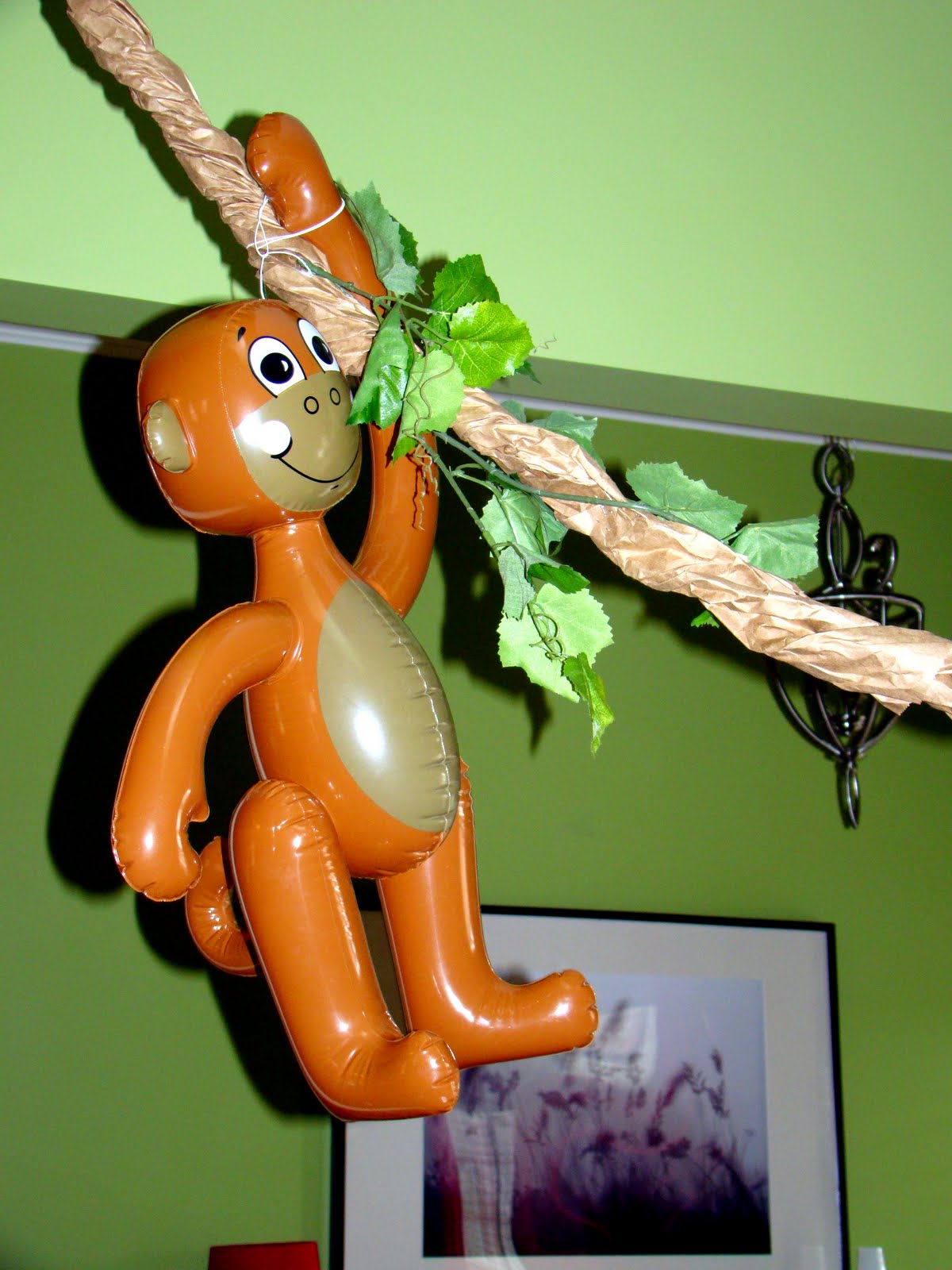 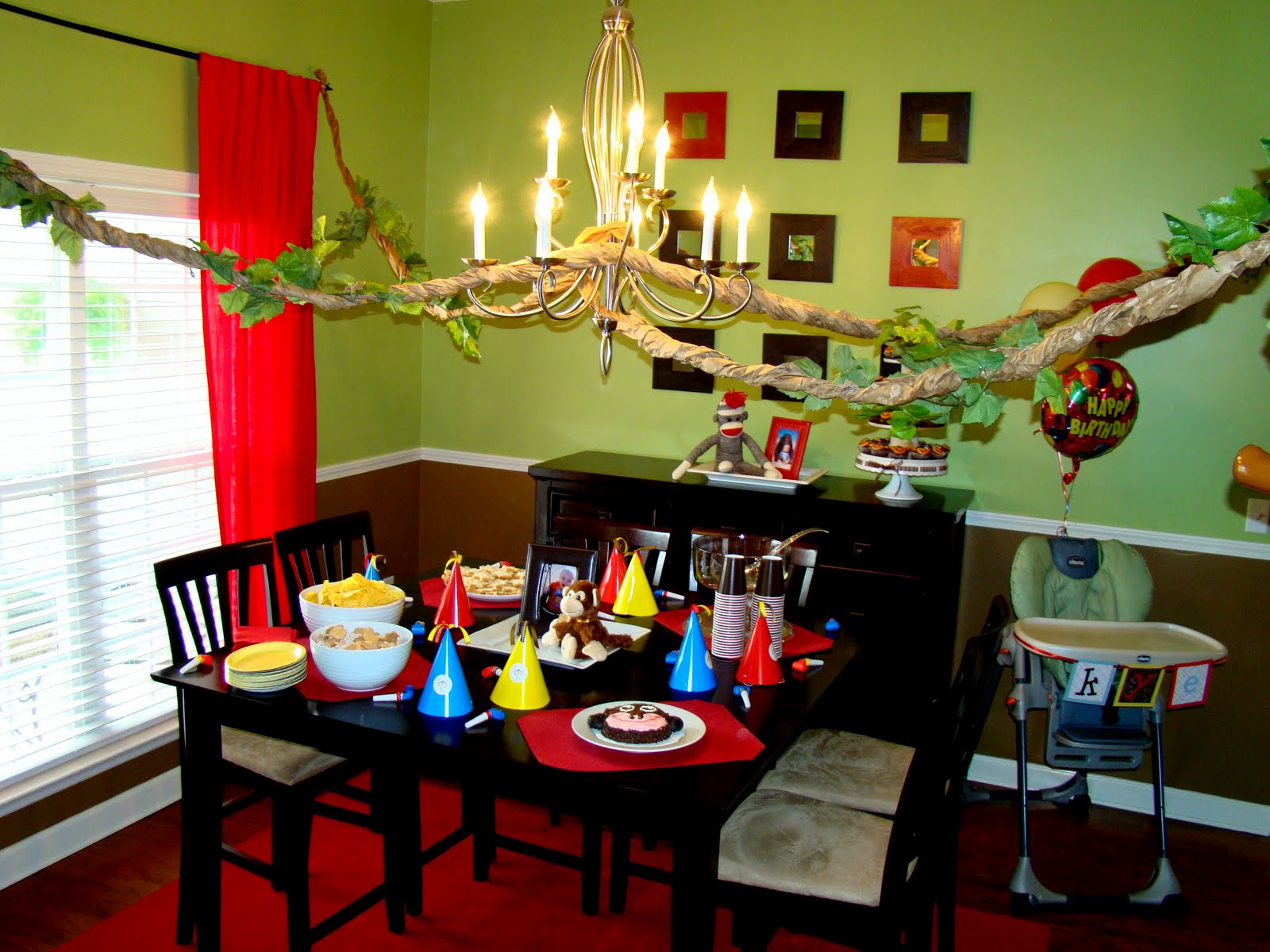 Even though the party was from 3:30-5:30 I still wanted to have a lot of food. I feel like the key to a successful party or shower is to have a TON of yummy food for people to snack on.

Everyone likes free food, especially YUMMY free food 🙂 I always try to have things that are easy, cheap, and tasty.

The number of people who went on and on about how good stuff was (especially Ashley’s boyfriend Garrett) made me feel like I succeeded in this area for sure!

We had animal crackers for the kids and to fit with the theme and I had chips to go with a buffalo chicken dip I put in the kitchen in the crock pot! 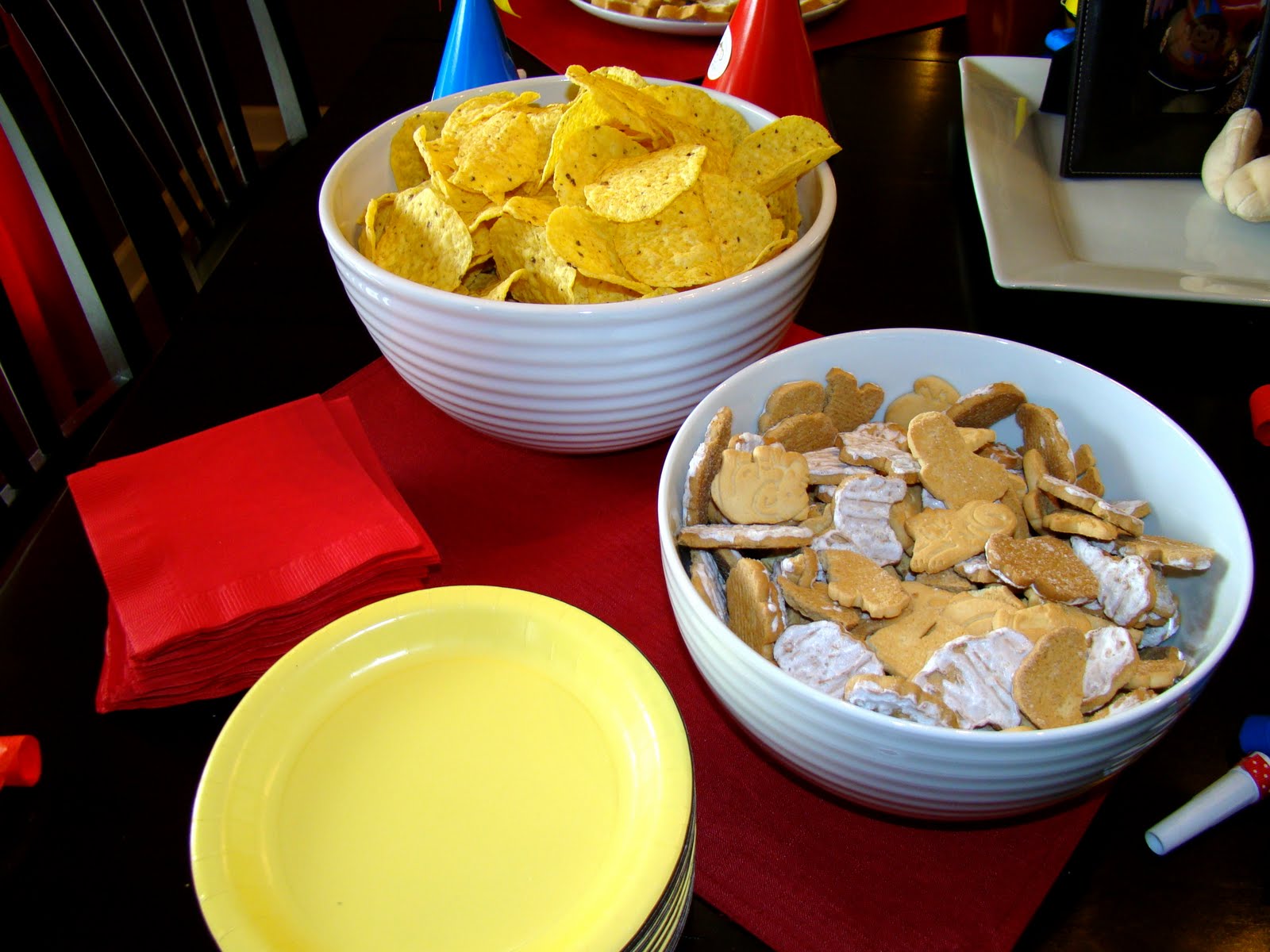 Of course I made my now famous Pampered Chef bread spread! 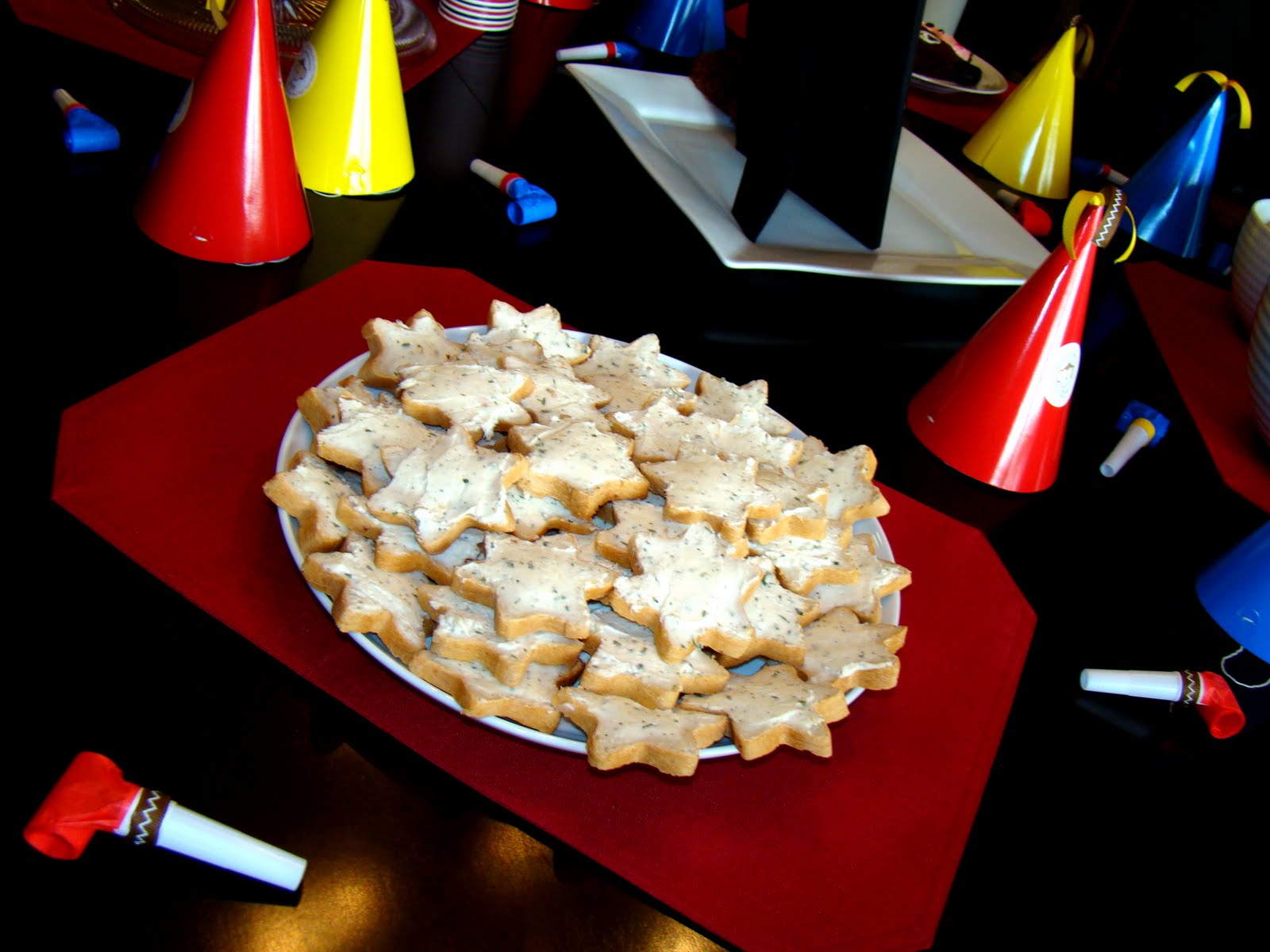 And I made this punch for the first time because the only punch recipe I know is a pink punch and duh, we couldn’t have pink at a BOYS birthday party! This was SO easy and SO yummy that I think it’s my new go-to punch for events! 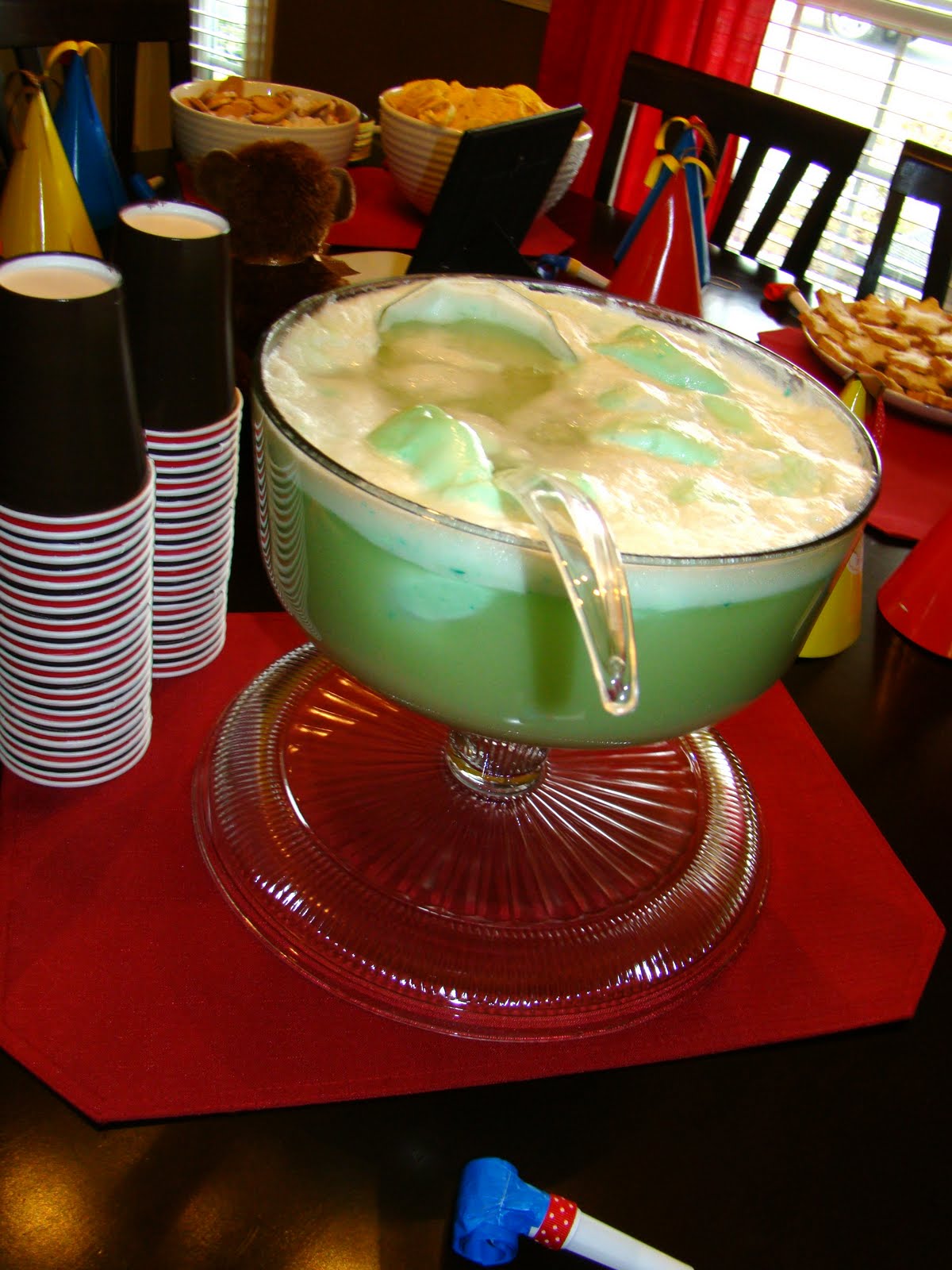 Mrs. Charlotte also helped me out and brought a fruit tray with dip and made some monkey bread!

I know it was a LOT of food but we really didn’t have too much left over which is always a good sign. You don’t want to have a TON left but you don’t want to run out either 🙂

I have always loved planning events and such and I really am proud of myself for how cute everything turned out for the party! I KNOW I worked harder than I should have and I know many of you are wondering how in the world I plan on being able to do this not just every year for Kye but for ALL my four children once we’re done having them.

It should be interesting for sure haha. Zach was a BIG help which was great as I think most men wouldn’t support going so overboard for a baby’s party! I think he was just happy that I did it all so cheaply 😉 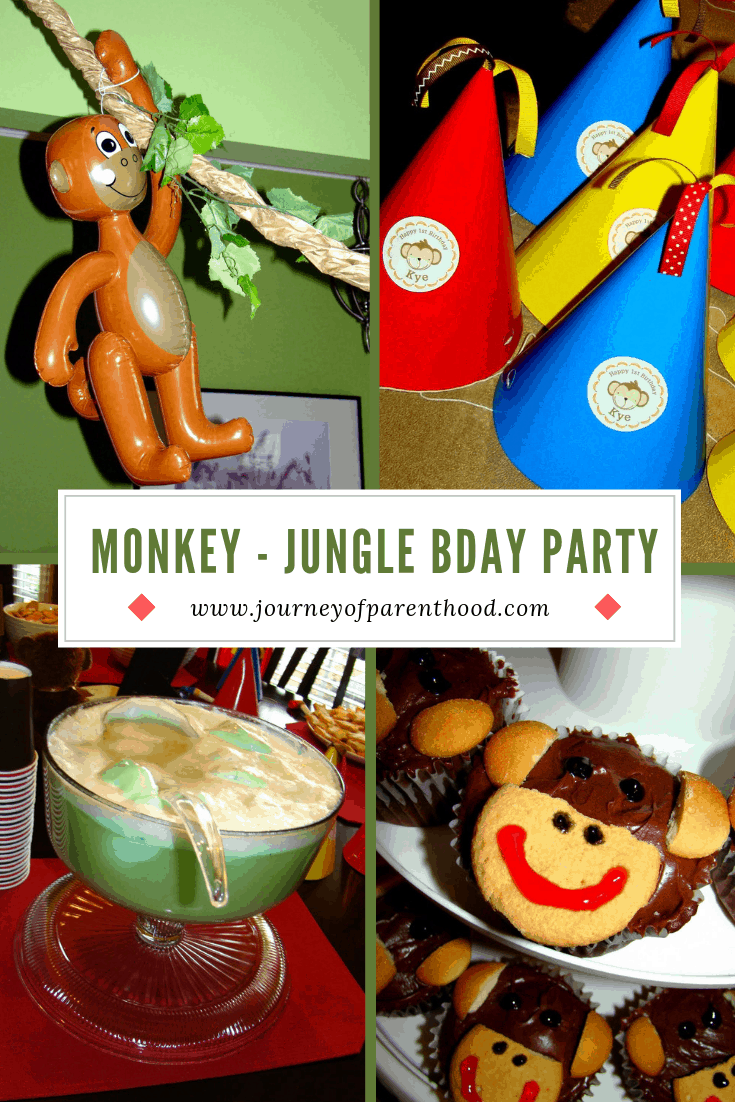 Looking for More Party Inspirations? Here’s All of The Parties I’ve Planned:

Looking for even more party planning tips and inspiration? Be sure to check out my Pinterest boards for ideas and you can also see over 35 of the best kids party ideas here! Happy Planning 🙂