I’m still waiting for the week to come when there isn’t something to say! Maybe kids never stop having interesting weeks? It seems like stuff is ALWAYS changing!!!

Doesn’t he look so much older? Turns out he’s bigger too!

He’s now wearing size 2-3 diapers (which I like b/c they have a wide range for weight so they fit him now while his 2s are too small and will continue to fit when the 3s fit him!) AND is wearing size 6 month clothes! I’m in the process of going through the 3 month stuff and deciding what to keep for the next boy someday. We also had several 3 month stuff that he never wore so I’m super glad I kept tags on because our Carter’s store will return no matter how long you’ve had it! Yay! 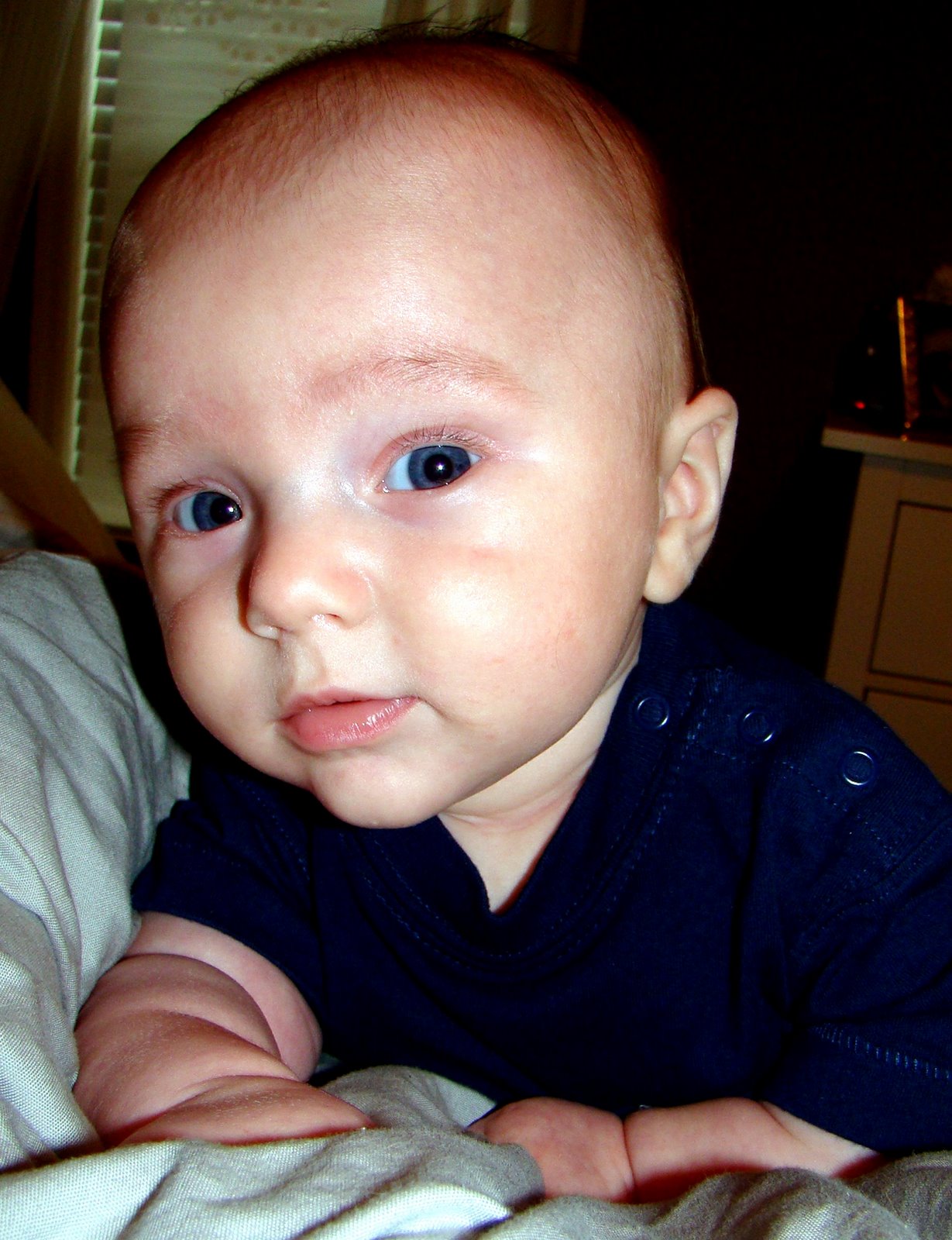 A couple weeks ago we dropped the night dose of the Zantac and I haven’t seen any side effects. I’ve been scared to drop the morning one just because I was worried he’d be in pain. Well, I did it! Goodbye Zantac! I stopped giving it to him yesterday morning and so far (aside from teething symptoms) so good. When he is fussy it’s not related to reflux b/c he’s not in pain when lying down. I’m so excited that he’s off of it because our insurance was DOUBLE what it should be because he was on it! YUCK! Plus no mother wants her kid to have to take a perscription everyday ya know? 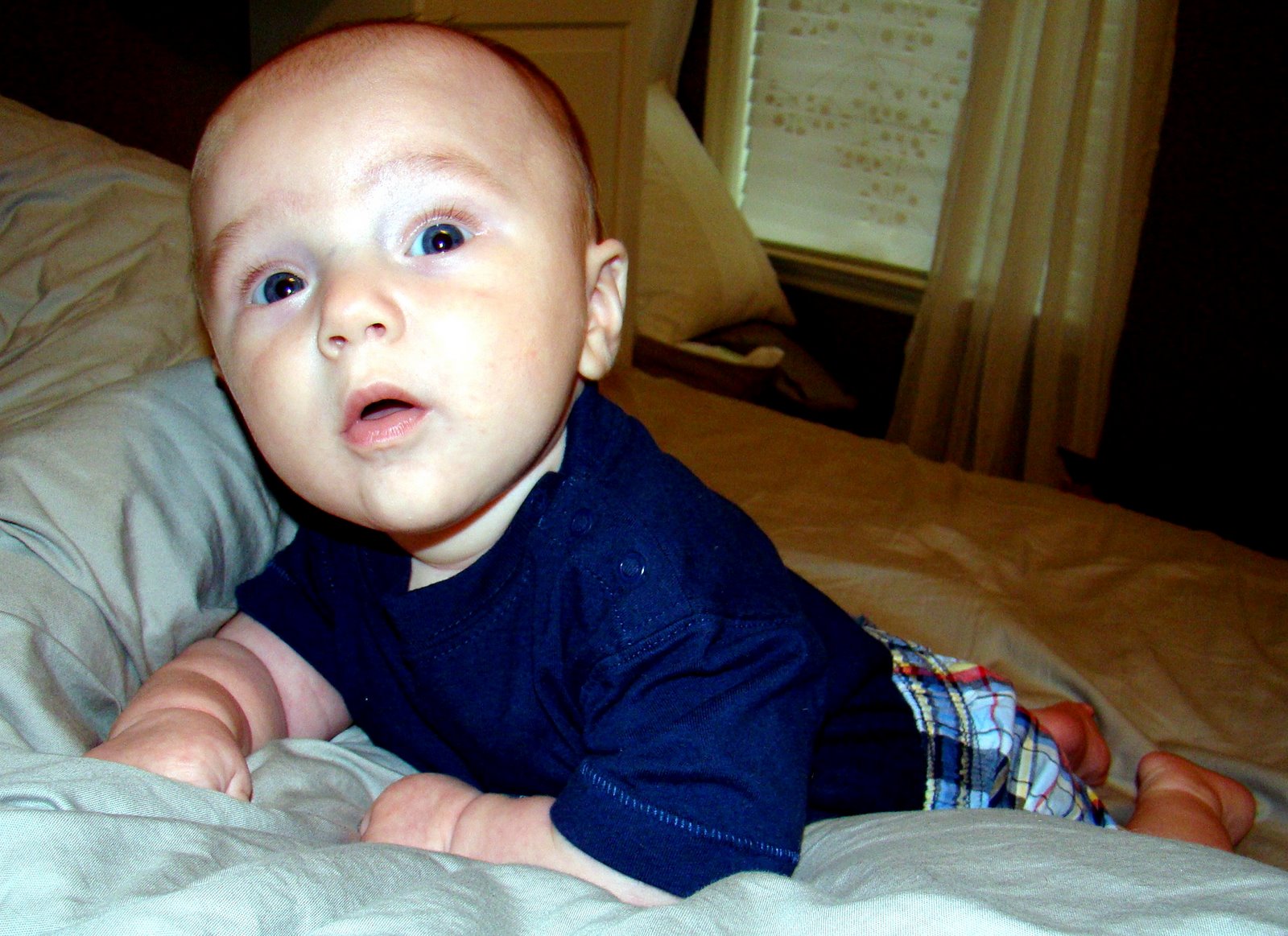 Rolling Over:
It’s baaaack! He’s back to rolling over and is now able to go from his belly to back on either side! He can roll both ways! Yay! I’m so glad he’s back to doing this as it makes tummy time so much more fun!
Poopy:
I know it’s normal for breastfed babies not to go #2 everyday but Kye has been like a mega-pooper since birth. Lately, though I was starting to be able to time his poops. Once in the morning and sometimes one in the late afternoon and they were HUGE ones. Well yesterday he didn’t poop at all! And no sign of poop today either! I know that the books say it’s normal but I’m a little worried…although we won’t be able to tell if anything is wrong with him until we can examine the junk haha so crazy! When it does happen again will it be a massive one I wonder? 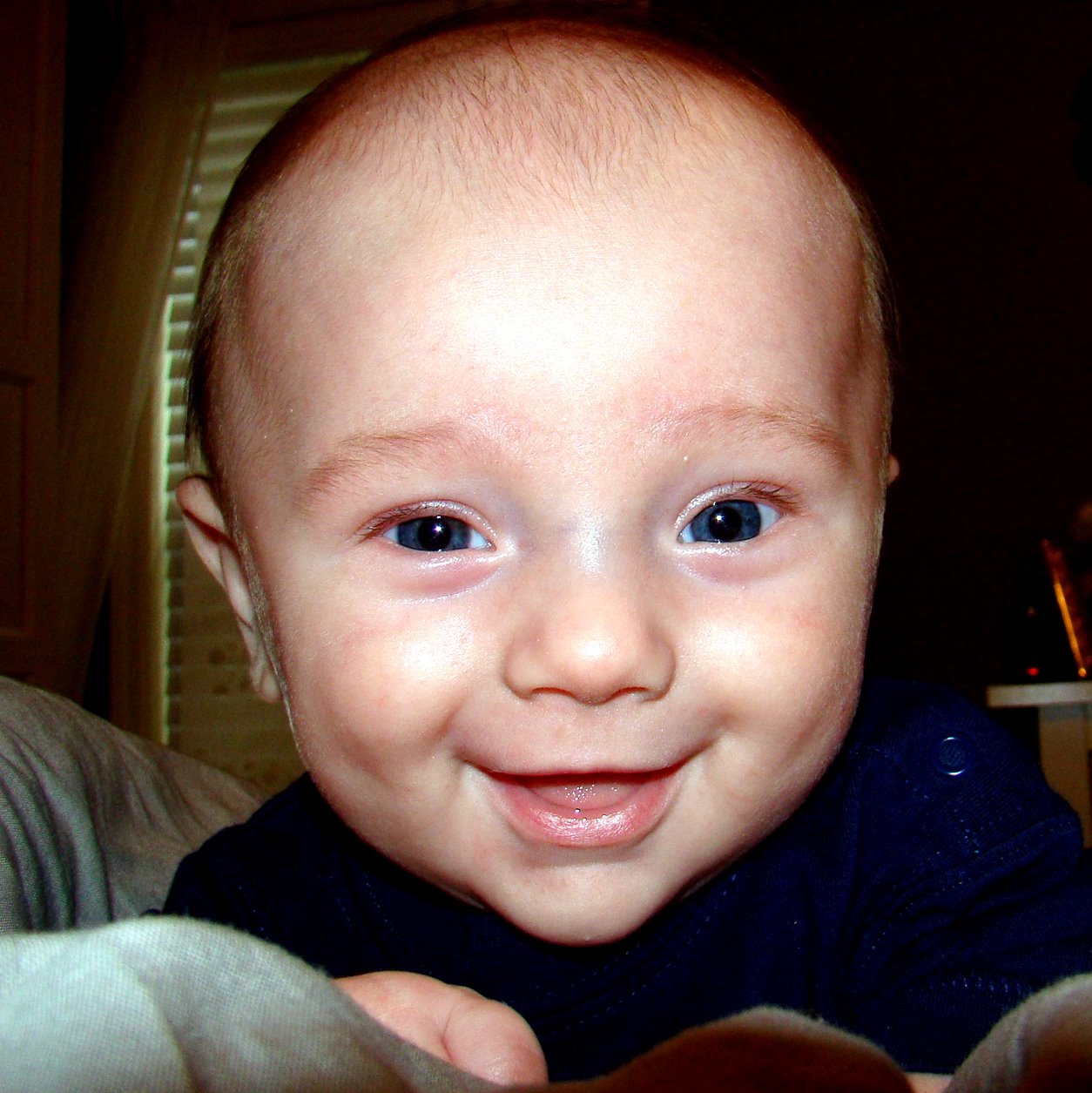 Mom watched him for us while Zach and I went on a little weekend getaway and she said he drank 2 8 oz bottles! The new “big” bottles we bought only go up to 8 oz so he better chill out! Mostly he’s still eating 6 but still! Will he ever end up eating more than 8 oz at a feeding? I guess once he starts in on the “real” food he won’t be needing as much to drink? It’s so complicated! I’m glad I breastfeed because figuring out formula all the time would be so confusing!

When I was going through his clothes I found a bunch of hats I forgot he even had them so I tried them on…doesn’t he look oriental???

He’s been sooooo gassy lately (wonder if it has to do with him not pooping?) and he LOVES it when I push his legs up to his belly then back down or do the bicycle thing with them. It really really helps with the gas too! He toots like crazy when I do it!!! And best of all he stops crying! 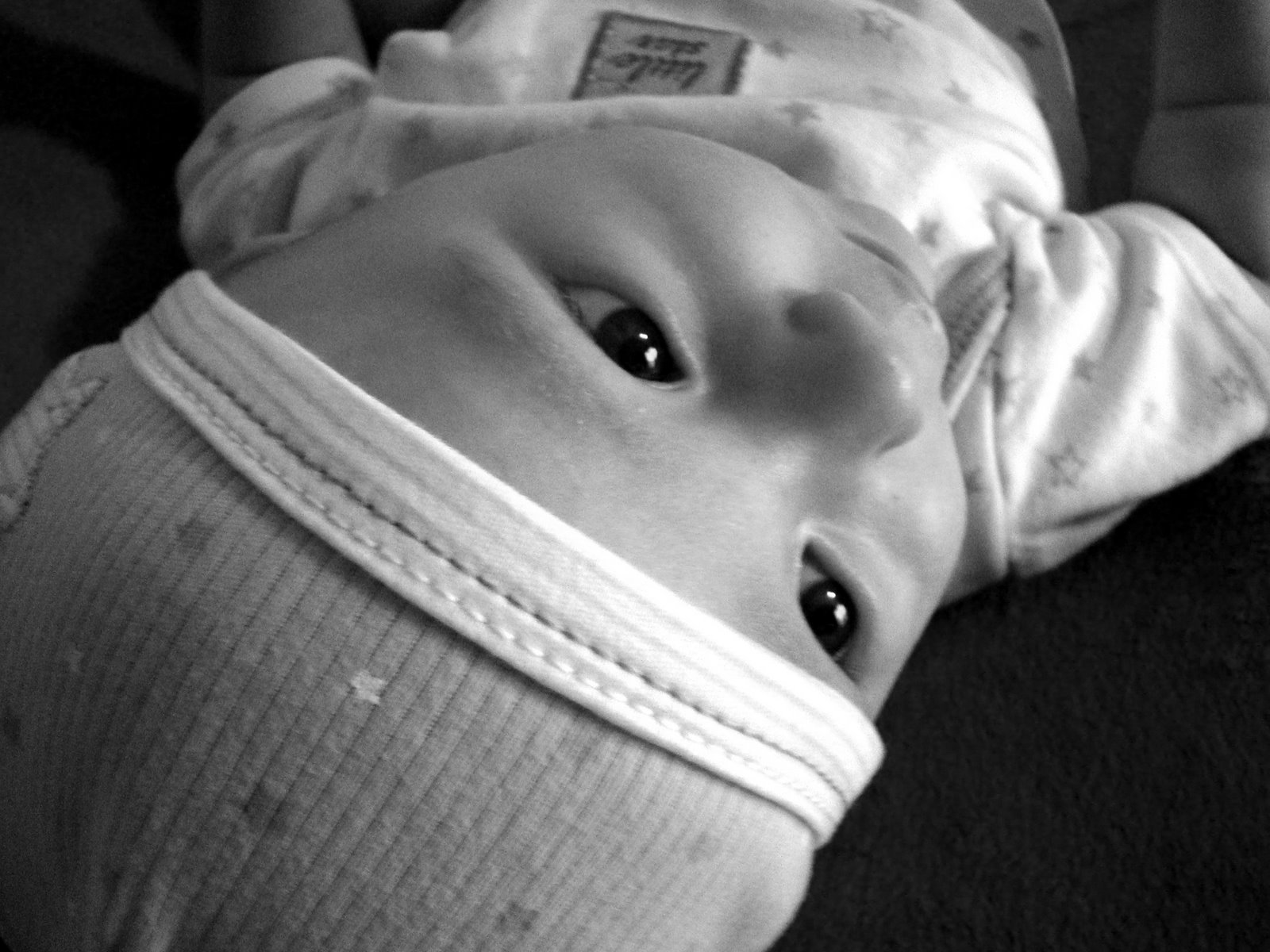 Yes, we’re 100% sure now that it’s happening! How long will this last? He’s still a very happy baby but he’ll randomly cry and I’m not used to that! It’s hard to see him in pain! We’ve discovered that sticking a paci in the freezer works wonders. He’s fussy so I give it to him and he sucks on it for like 2 min max and spits it out, happy as can be!

He’s drooling like crazy and is putting EVERYTHING in his mouth! He’s also constantly sticking out his tongue because I think it feels good to rub it over his gums. I’ve only had to give him Tylenol once and it was when he woke up from a nap screaming over and over and I could tell he was in pain. Yet I didn’t know about the frozen paci yet! He LOVES Tylenol but obviously it’s a last resort and I’m hoping now that I know about frozen paci that he’ll be okay from now on 🙂

Right now Kye’s favorite toy is….MOMMY! I’m loving the attention, who can blame me, and the many many smiles that have been coming my way! On the way down to Melbourne he was precious! He was awake in the car seat (rare!) and was being pretty vocal so I decide to climb back with him instead of having to keep reaching behind me all the time to push the frog’s eyes or grab his book that fell, etc. You could tell the child is NOT used to me being in the back seat with him! He smiled the most and biggest I’ve EVER seen! He was so shocked and happy! It makes my heart feel good to know I’m that loved that just seeing me makes his whole life happier 🙂

He’s also loving standing, as I mentioned in an earlier post. And he adores the dogs! This age is really neat because you can tell that before he didn’t “get it” and now he does. He is understanding that the dogs are animals and that they move and such and he gets so excited! Levi’s favorite spot is to sit on the back of my nursing chair so when Kye gets done eating he first thing wants to STAND (of course) then he sees Levi and wants to touch him! It’s precious! I try my best to CUDDLE after his eats because he’s not much of a cuddle baby and I figure I better make him do it while I still can! haha

Another thing I’m really enjoying that Kye loves is reading. I loved reading growing up and when we went to Mom’s she gave me a bunch of my old books. It’s so cool reading them to Kye because I do the same voices MY mom did! Isn’t that funny how we remember those kinds of things? I love laying on the floor next to him and reading a story together. He pays attention through the whole book and lately he’s been talking while I’m reading so it’s like he thinks he’s reading too haha too cute!

Here are the pics of when I went in the back seat with him:
Doesn’t he look shocked? 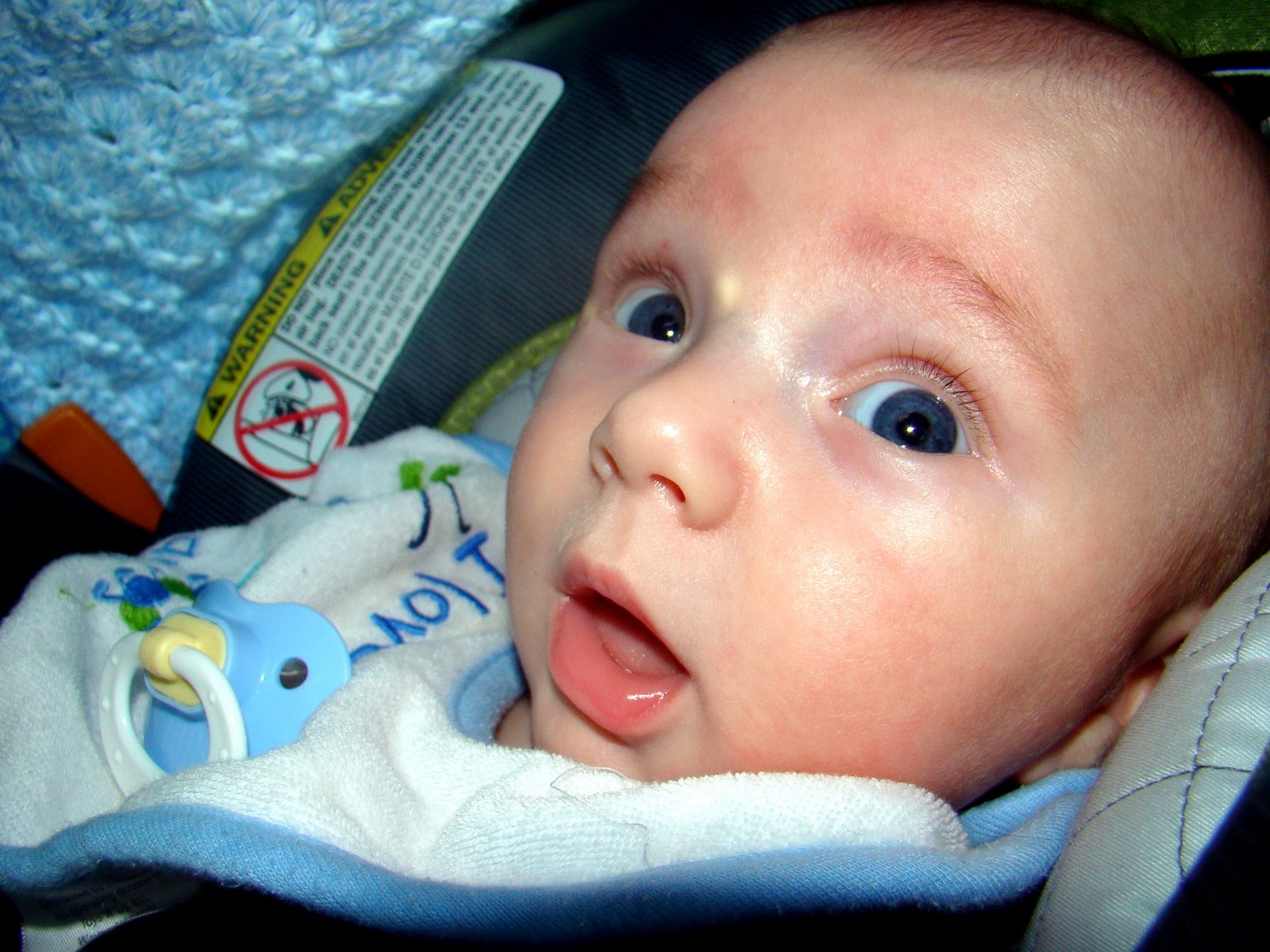 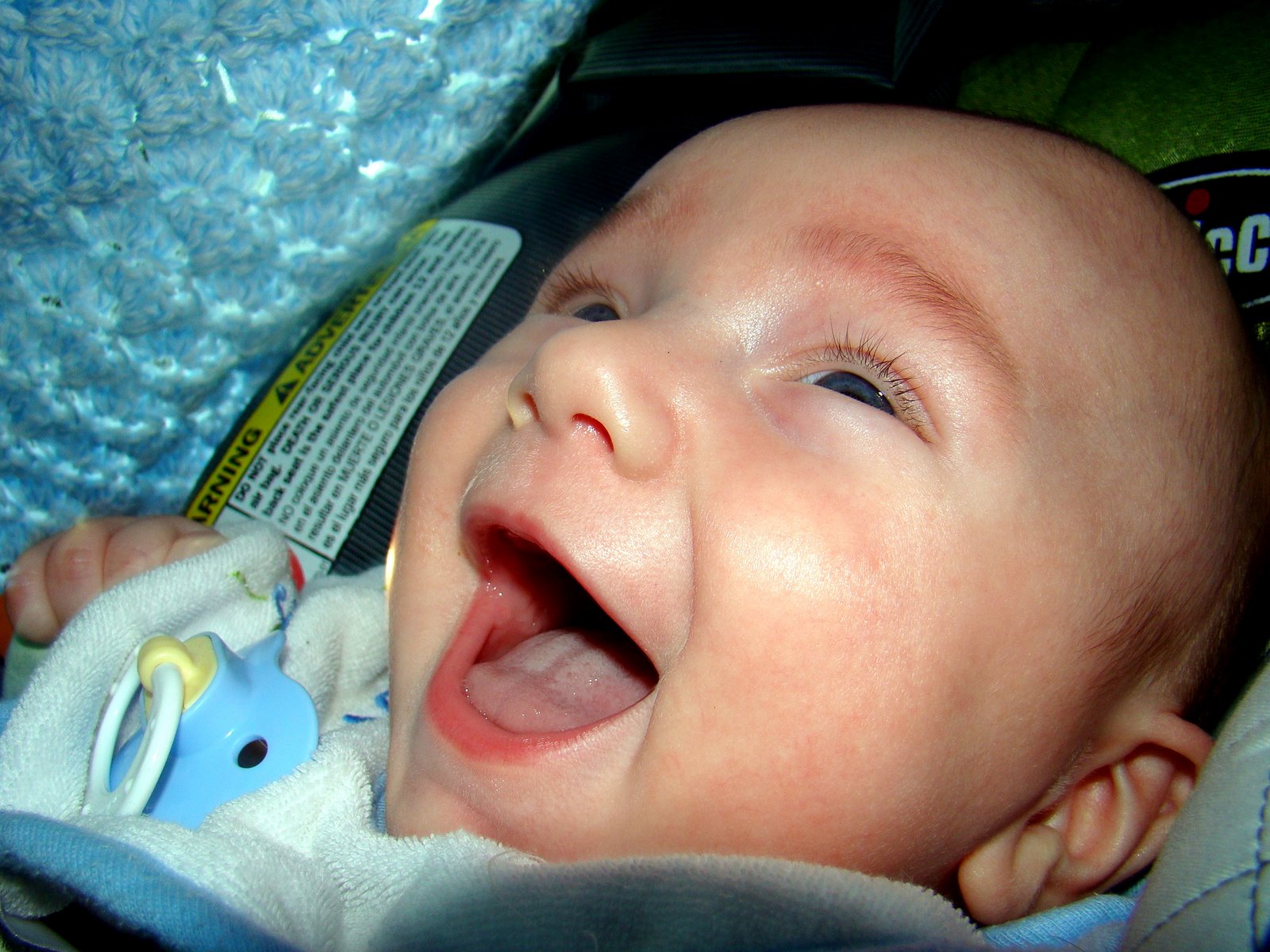 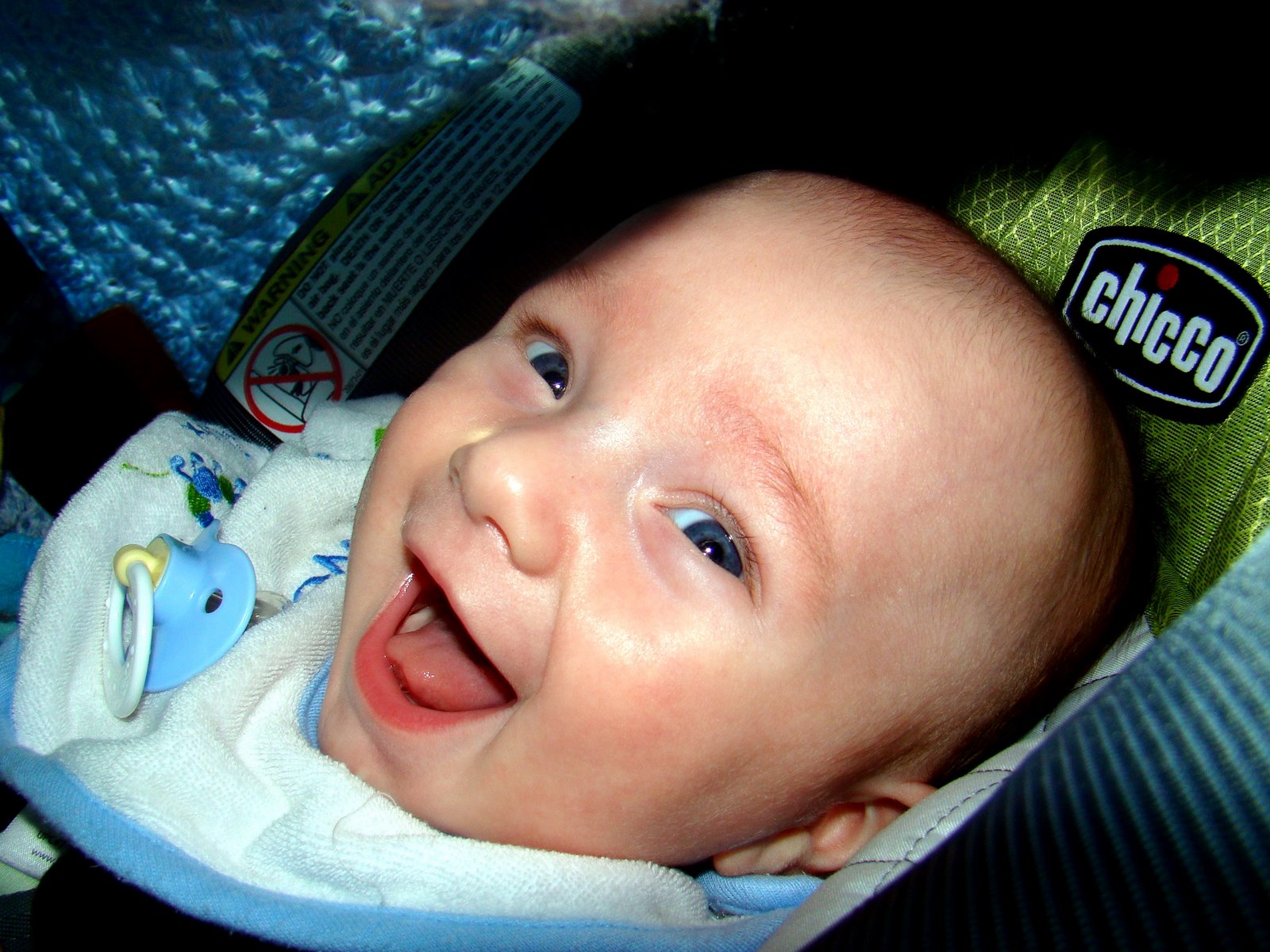 Me
Ugh..I gained 2 lb!!! Which is so dumb b/c I actually worked out this week! I did crunches almost everyday and did wiifit (hey it’s all I can manage..it’s tooooo hot outside) 4 days! I don’t get how I gained! I was even careful on vacation! It’s so frustrating but I’m “supposed” to be on my time-of-the-month right now (even though Aunt Flow ain’t visitin’) so maybe that’s why? I know back in the day I’d gain a whole pants size sometimes during PMS time! I’m hopeful that it’s just my wacked out hormones and that I’ll have some BIG weight loss next week! Trying to stay positive..not an easy thing for me 🙂