Mom left on Friday so Zach and I didn’t really know what to do with ourselves for the weekend! We rarely have weekends with no plans so it was kind of strange!

Saturday we decided to have a family day. Since Kye has been born we haven’t done much just the three of us and it was such a good time!

We colored eggs for Kye’s first Easter! Zach bought ones that came with face stickers so we made an egg representing each member of Zach’s family, it was pretty funny! Kye was awake for most of it which made the whole thing more fun, even though he’s clueless!

Zach was PUMPED about egg coloring 🙂 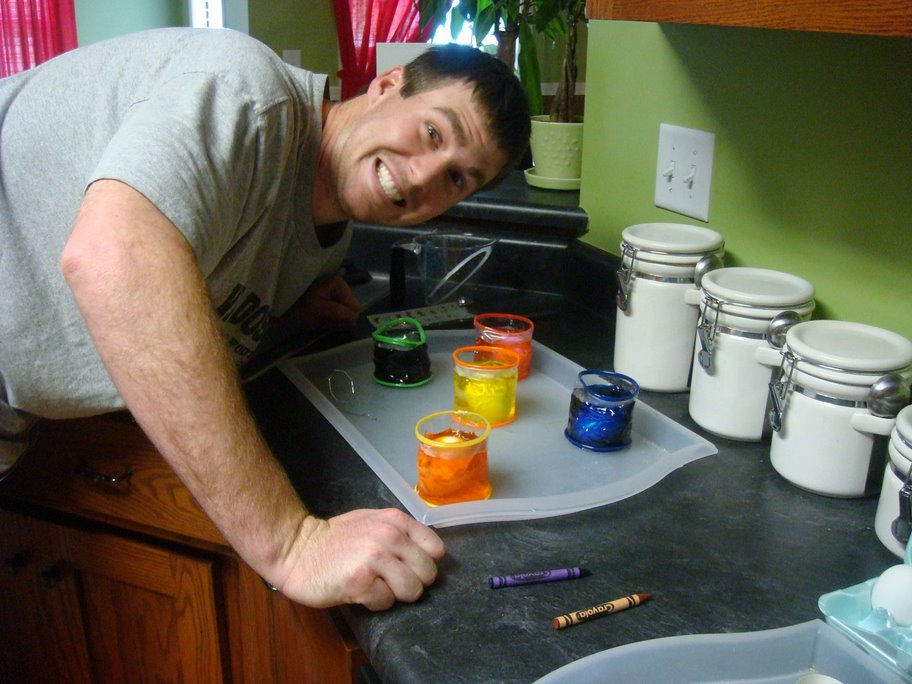 I think Kye is more interested in Mommy than he is the egg.. 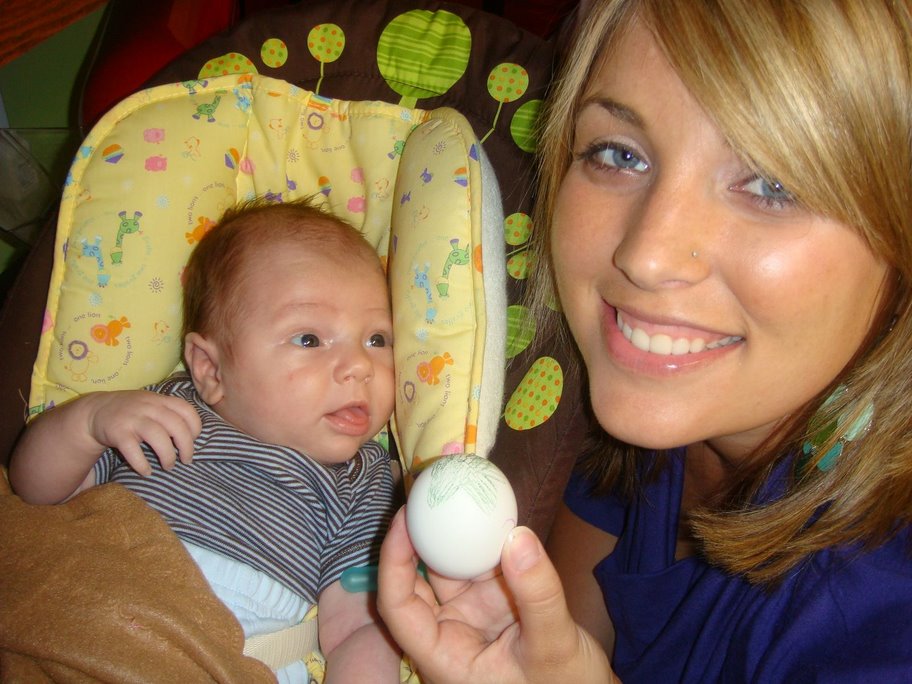 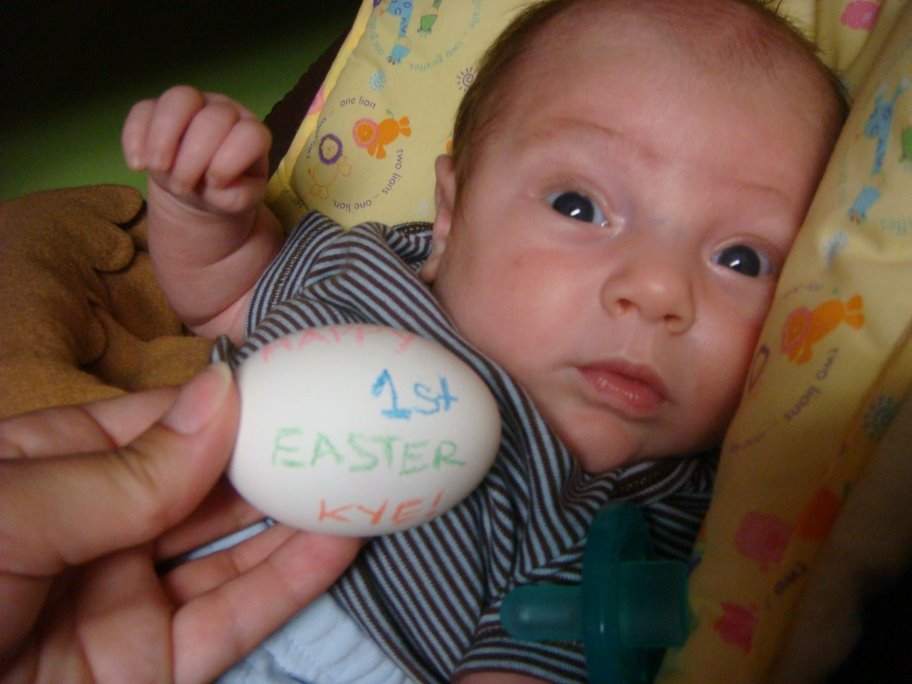 fter the decorating we went and ran some errands together then got Subway and had a picnic down at the park in our neighborhood. It was a BEAUTIFUL day and we wanted to take full advantage of it! Kye did sleep through most of the picnic but when we took him out of the car seat he was cute. We saw lots of little boys playing on the playground and it’s neat to think that one day that will be our little baby! 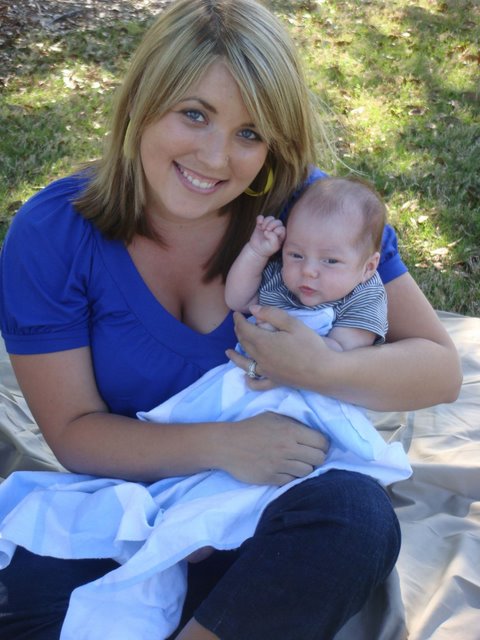 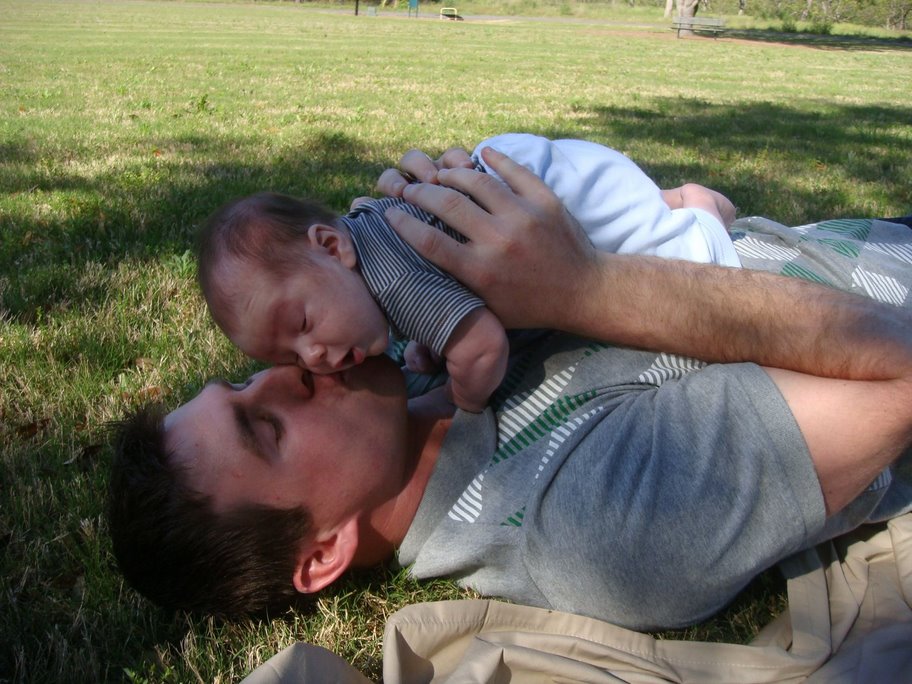 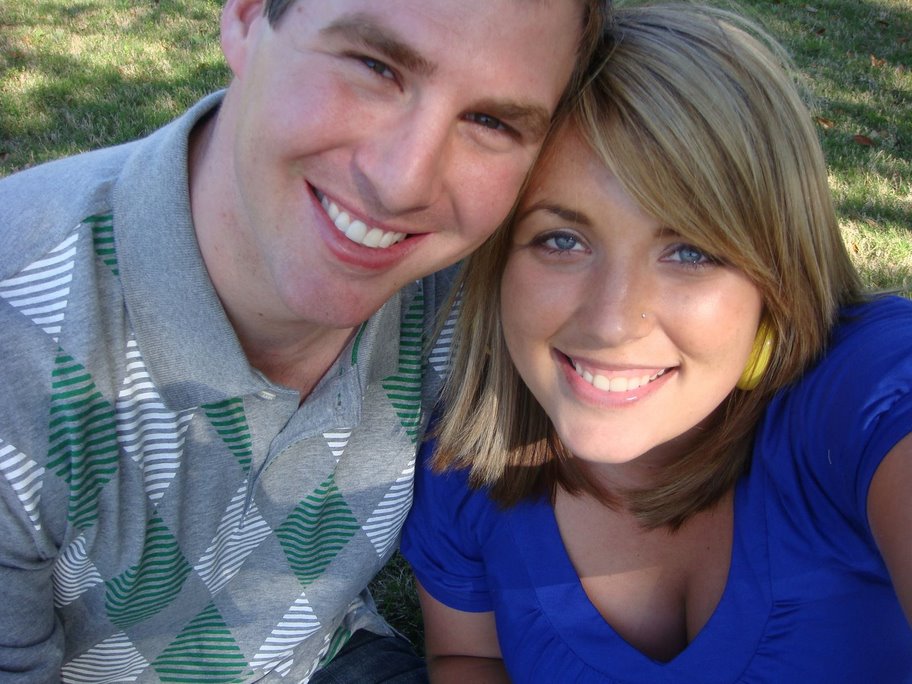 Once we got home Zach opened up the fold out couch in the living room and the three of us watched Slumdog Millionaire. It was really good and I’m so glad we finally got to see it! Kye slept on my chest the entire movie and I loved our little family just being together. It was SUCH a fun day and something I hope we can continue in the future! 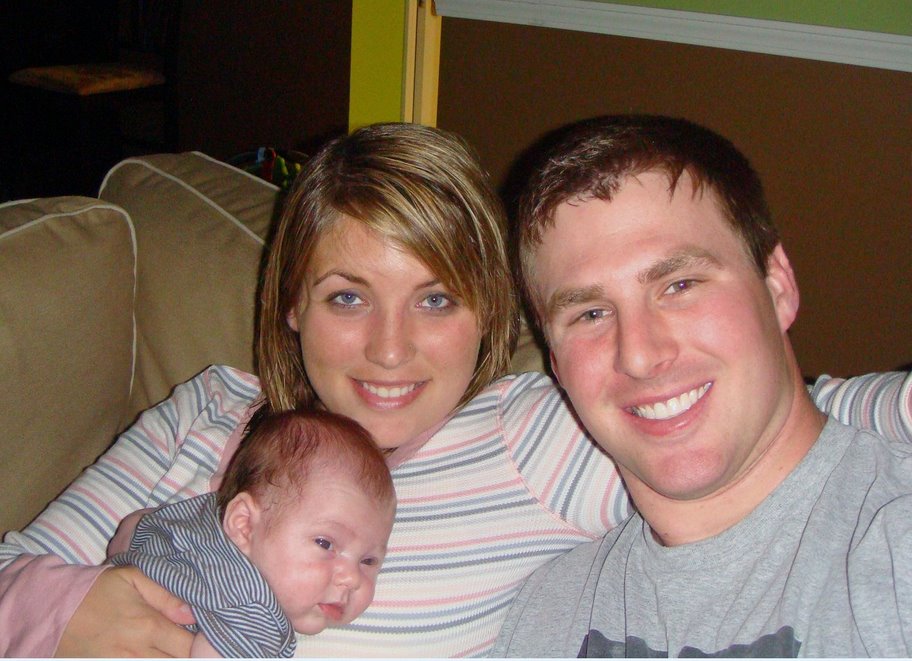 Easter Sunday wore me out! Rushing around to get ready for church then going to Zach’s grandma’s was just a LOT for me! Before we went to church we gave Kye his Easter Basket. I swore I wasn’t going to go overboard with holiday gifts for a baby so I got him a bathing suit outfit because he needed one anyway for the summer. I stuck the little stuffed rabbit Aunt Becky got him in his basket and I only bought him one actual gift, and it’s super awesome. 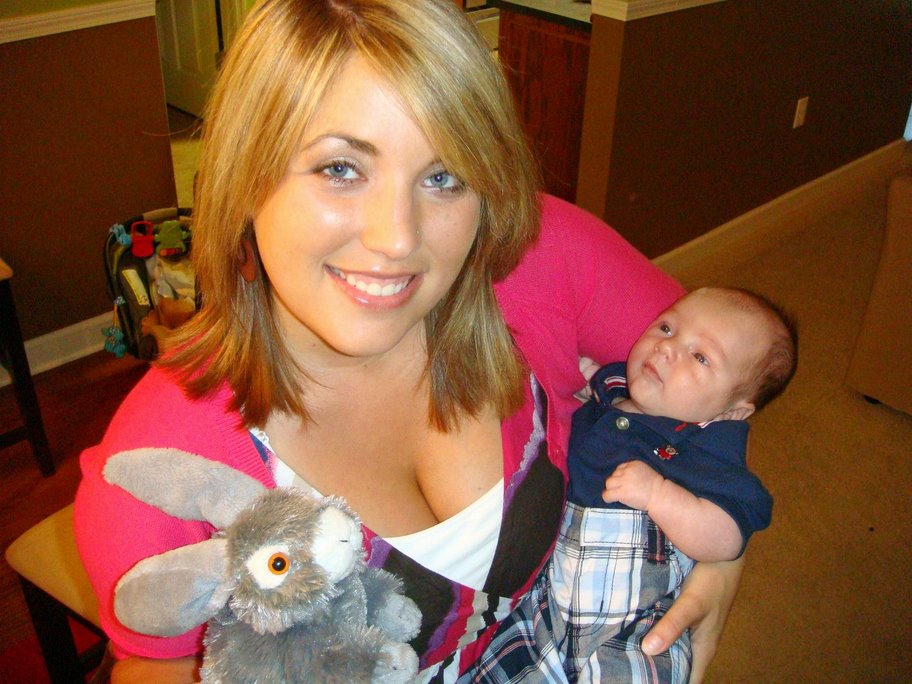 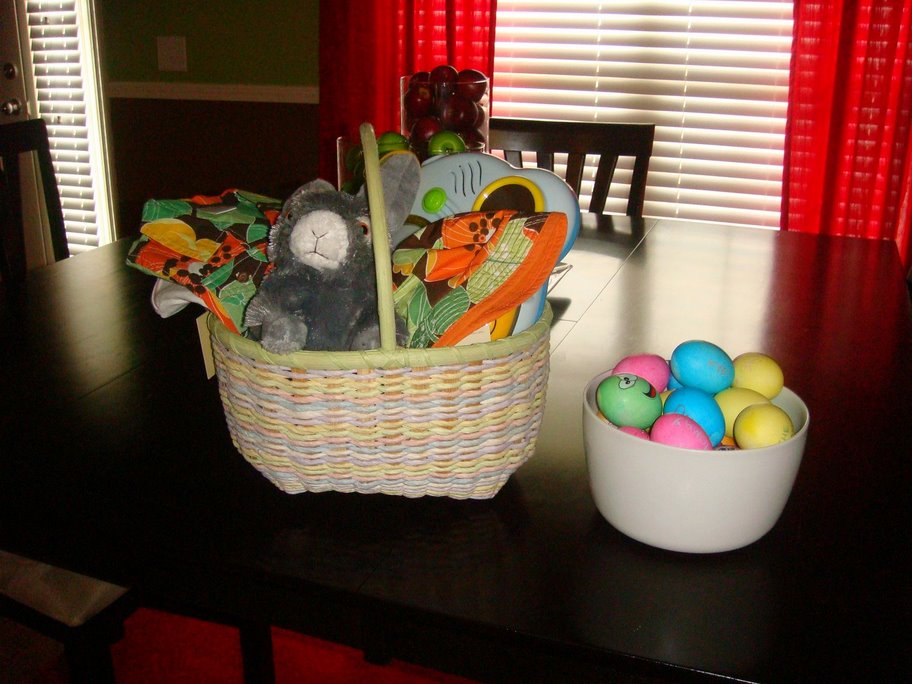 Hopefully someday the hat will fit!!! 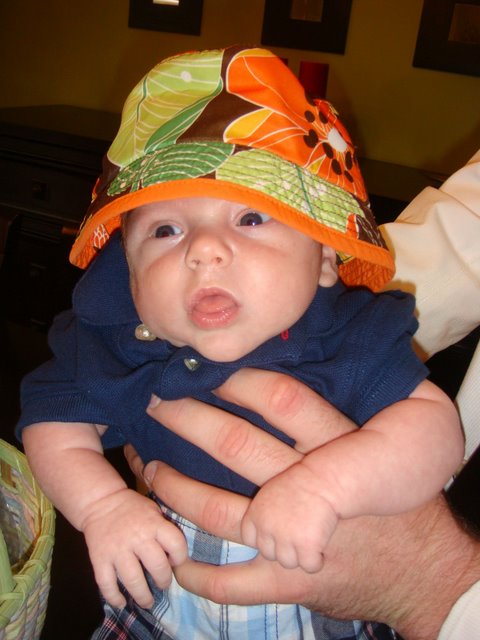 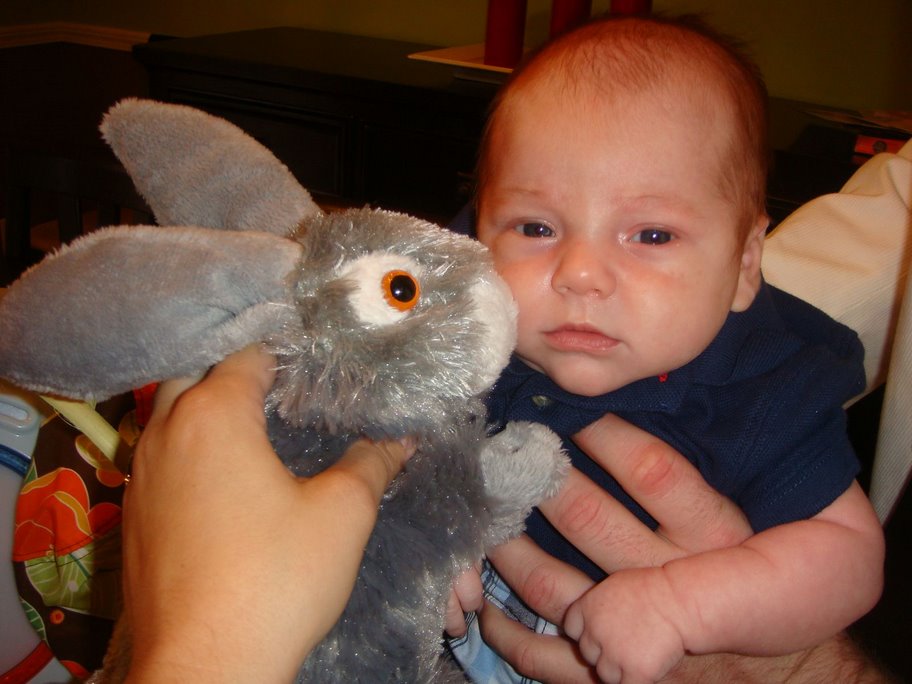 Kye loves lights and musical toys so I wanted to get him something that would do both and that would play music for a loooong time so I wouldn’t have to keep hitting the button to make it play again. I found this really cool Chicco thing that plays music for up to 10 min, is voice/sound activated and allows you to record your own voice! Duh, he loves it and I’ve even used it in his nursery to help him fall asleep! I like it because there are no soft parts on it either so I can leave it on the floor and don’t have to worry about Mr. Levi chewing it up 🙂 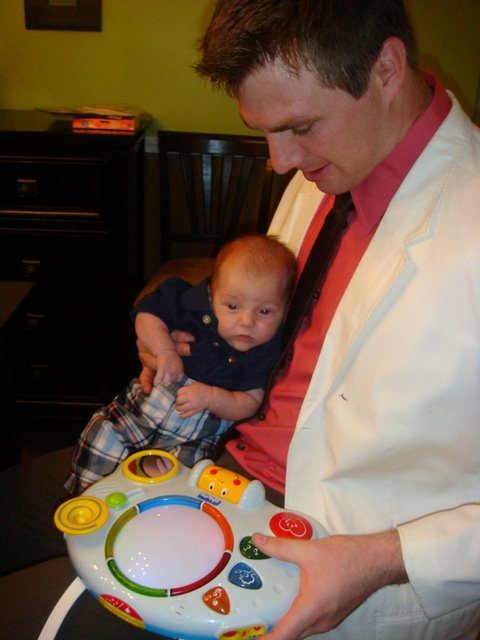 Easter also fell on Levi’s 2nd birthday! It’s hard to believe he’s already 2 years old! I’m so proud of how amazing he has been with the baby. I miss the days of Levi being my baby but he’s adjusted well and I truly think he and Kye will be best buddies one day 🙂 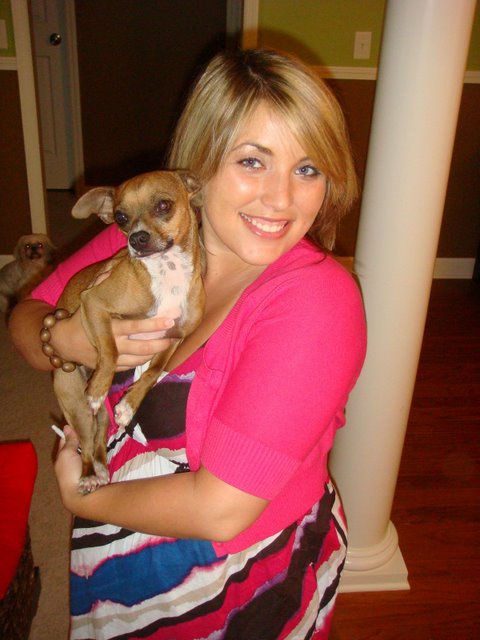 Getting b-day kisses from his best friend! 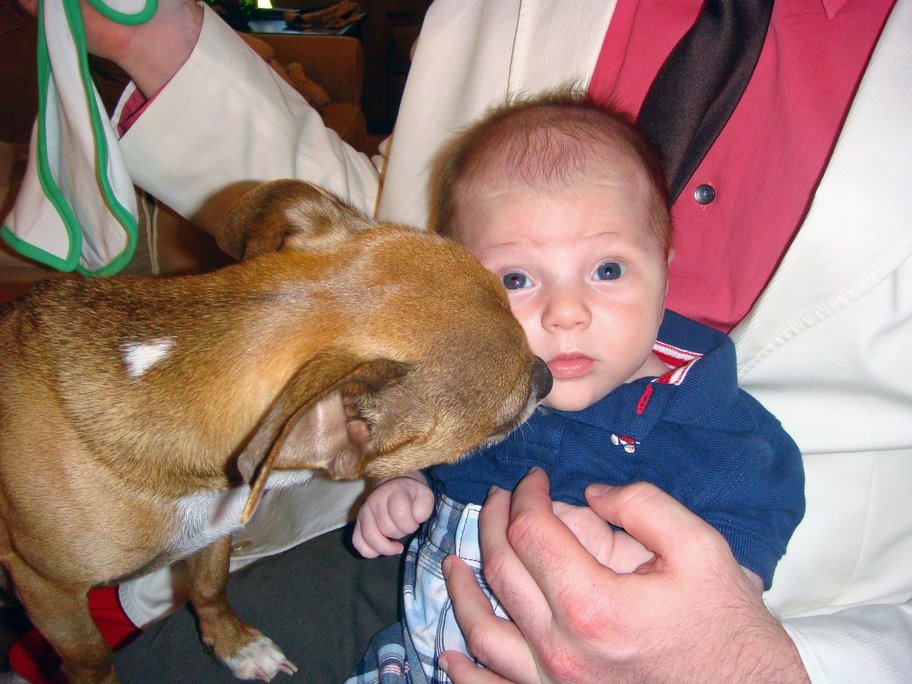 We went to our old church in Lakeland to visit since it was Easter. We were a little late but not too bad and Kye slept through the whole service. (I’m telling you this kid ADORES his car seat) Afterwards we went to Mema’s. All of Zach’s immediate family came as well as his cousins on that side of the family. It was nice to see everyone! We let Mrs. Charlotte give him his bottle because Mr. Rusty got to give it to him at the football game. It was Colt’s first Easter too and he’s waaaay more “with it” than Kye is right now! I didn’t bother making Kye hunt for eggs…what would be the point? He looked cute in his Easter outfit though and isn’t that all that matters? I really liked my dress and I promise it’s super flattering on me…it was windy as crap outside so I look huge in these pictures! 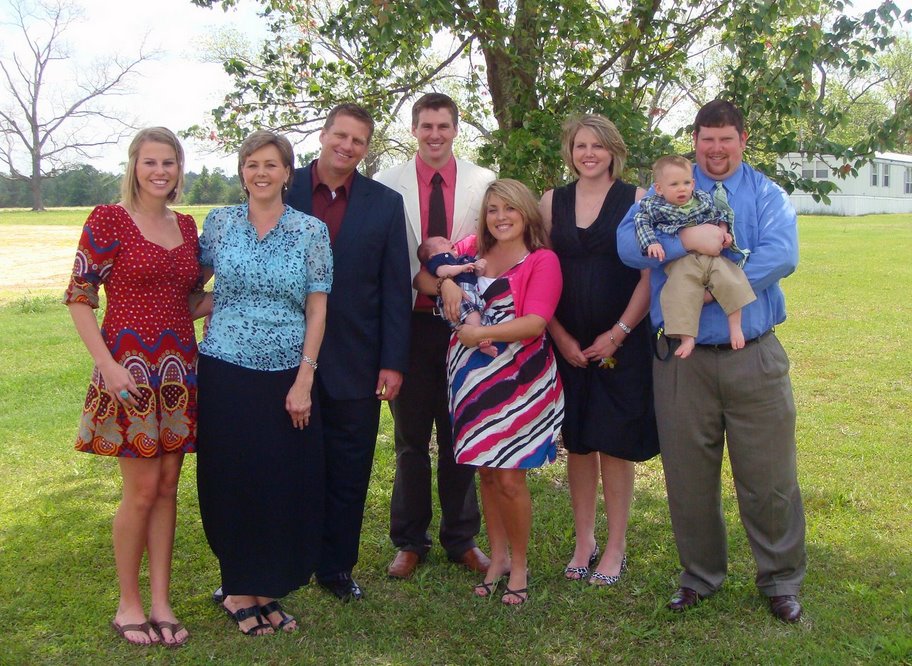 After we got home I had to pump for the missed feeding then I went to bed…at 4:00!!! I’m telling you I was GONE. This Easter was fun but I really can’t wait until next Easter when Kye will actually semi-understand the whole thing! 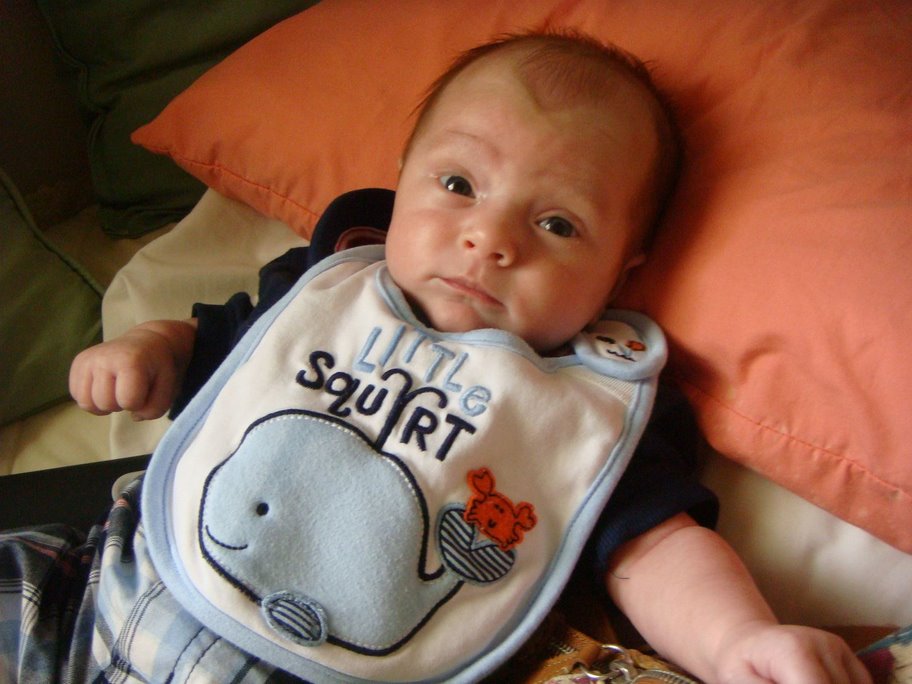