At five weeks old Babywise recommends moving Kye’s schedule again. It felt like we JUST got the hang of the eating every 3 hour schedule and now I had to move it on the poor kid. We started moving it last Monday and we have such an easy baby! He adjusts pretty quickly to whatever I throw at him.

I hunted around online for some help with this new schedule as I just felt like feeing him at 9 and THEN bathing him put us to bed too late and I really didn’t want to be having to stay up until after midnight to feed him again!

(I love the little outfit I got for Kye (I’m the apple of my daddy’s eye) so I wanted to get a few pics of him in it!) 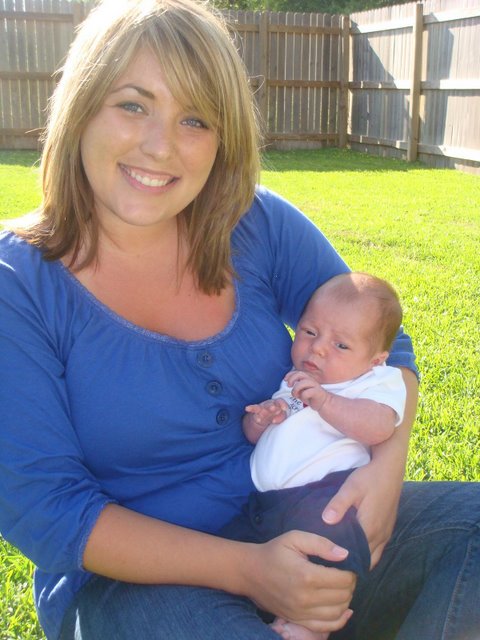 In my searching I found a GREAT source of info…a blog! Lots of people (more than I EVER imagined actually) have contacted me about how much my blog has been a help to them and now I’m glad to have found a blog that can help me out 🙂 For anyone else who needs help with Babywise or wants to start it, I highly recommend checking this blog out!

The biggest thing I have learned from this site so far came from this post.

I got frustrated with Zach and Mom both because they kept questioning me about Babywise and why he must eat, play then sleep. It was annoying because I didn’t even know myself! I’m the type of person who has a plan and sticks to the plan…do I care why? The book said so that’s why! But this really did clear things up for me and helped me shut up the millions of questions 🙂 I think I even turned both of them into supporters 🙂 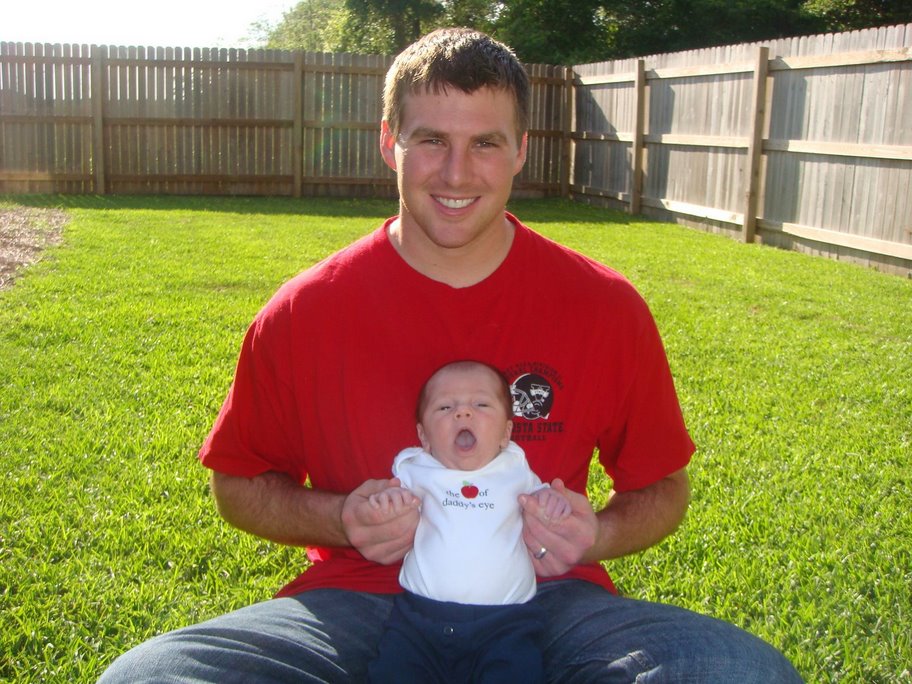 With the help of the Babywise Blog I’ve altered his schedule a bit and this is now Kye’s daily schedule and will stay this way for quite some time I think:

We bathe him after this feeding and change into night clothes

11:30 pm-midnight: I know it’s only 3 hours instead of 3 1/2 but I finally realized that it’s okay 🙂 We’ve been going to bed before this feeding and then setting an alarm to wake up for it. We leave the lights down low and no play time afterwards..straight to bed!

What should happen in a couple weeks is that he will drop the 4:30 am feeding and sleep through the night! Won’t that be wonderful? Already we’re getting around 7 hours, even though they are broken that’s still good for such a young baby!

We’ve moved his bassinet into his nursery and last night he slept in there for the first time. It’s nice to have our room to ourselves and he really doesn’t require Zach (yes, Zach gets up with him during the night if he’s fussy…aren’t I lucky?) to get up too often. Since he got diagnosed with GERD we have been having him sleep in his swing all the time, but it’s a habit I really don’t like so we found online a way to allow him to sleep in his bassinet.

Zach made a prop thing in his bassinet using rolled up towels then proped the whole thing up on a laundry basket! So far it’s working great! Since he is almost 6 weeks old I really want him to sleep in his crib so we ordered an incline wedge thing to go ontop of his matress, we’ll see if it works once it gets here.

During the day I’ve become more strict on his naptimes. Like I mentioned earlier the order is eat…play…sleep. So I feed him, hold him upright for 30 min (helps with the GERD), change his diaper, then play with him for about 30 minutes then start to put him to bed. Before I’d put him down for a nap an hour before his next feeding time but he was rarely falling asleep by then or he’d nod off 15 min before it was time to wake him up again! So now I start putting him down 2 hours before his next feeding time.

Putting him down for a nap is tricky. Babywise says to put him down awake so don’t rock him or anything until he falls asleep. I will turn lights off and rock him or talk softly too him until he gets tired but I always lay him down before his eyes actually get heavy enough to stay shut.

Reading to Kye before bed-time! 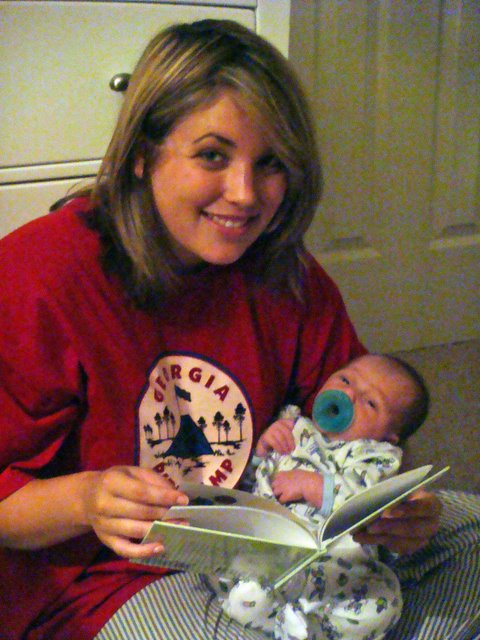 Babywise also promotes CIO (cry it out) which basically means letting him cry himself to sleep for up to 20 minutes! I believe this probably does work and it wouldn’t bother me to let him CIO but with his reflux issues it hurts him to cry too much so I don’t do it yet. I put in the paci and pretty much run back and forth to his room over and over putting the paci back in until he falls asleep. Usually I will just hold it in his mouth until his eyes get heavy (he is so cute because he will put his hands strongly against mine like to tell me I better not leave!) Then I’m lucky if he stays asleep for 40 min or so! He usually wakes up crying because he’s going to the bathroom and will usually fall back to sleep pretty quickly when he’s done. It’s a lot of work but it will all be worth it when he enjoys his bed and sleeps easier.

He likes to be able to feel the paci on his lips when he sleeps! Wherever Kye goes Levi is usually beside him 🙂 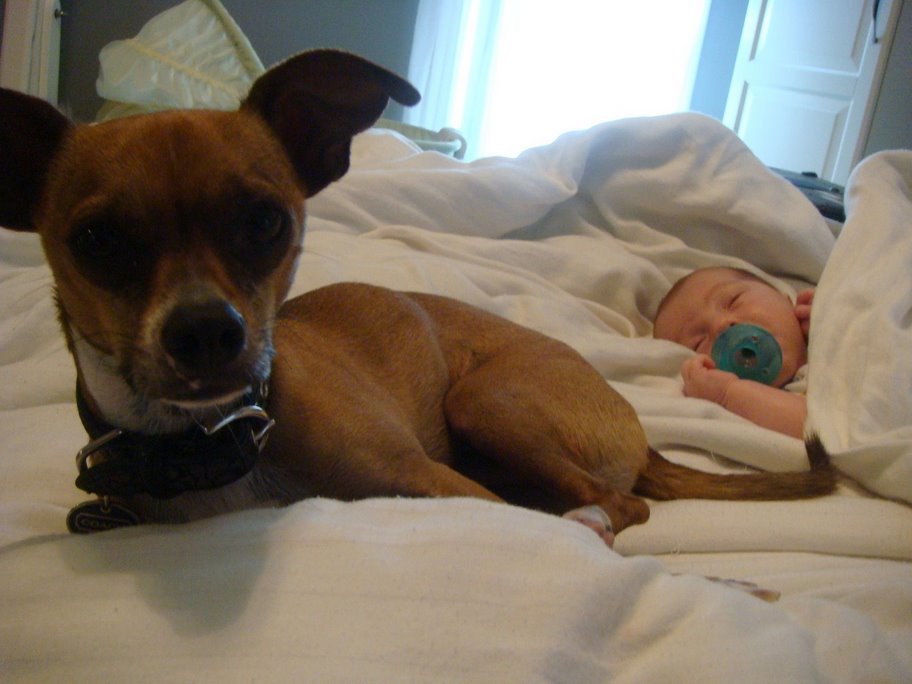