Yup, we’re off track again! They wanted us to come in the day after the the wedding but we knew that wasn’t possible so the next closest appointment date to Kye’s actual birthday was St. Patrick’s Day so we took it! The appointment was at 10:45 and he naps from 9-11 but it worked out fine. Lately he’s been in his crib talking from 10:30 to 11:00 so I just put him down dressed (I gave up dressing my kid all cute for the dr appt. They pretty much strip him down anyways so why not just let him be comfortable?!?) and got him up at 10:30 and left!

Zach came with us to this appointment because Kye would be getting shots and we ALL know I don’t do shots! It was a very short wait which was nice and it was nice to run into Kecia and her little family. Kecia and I went to high school together and were pregnant at the same time. Her son, Kale, is only a couple weeks older than Kye but was RUNNING around the waiting room!

The weighed Kye on the “big boy” scale for the first time which was pretty exciting (of course Daddy held his hands to make sure he didn’t fall!) 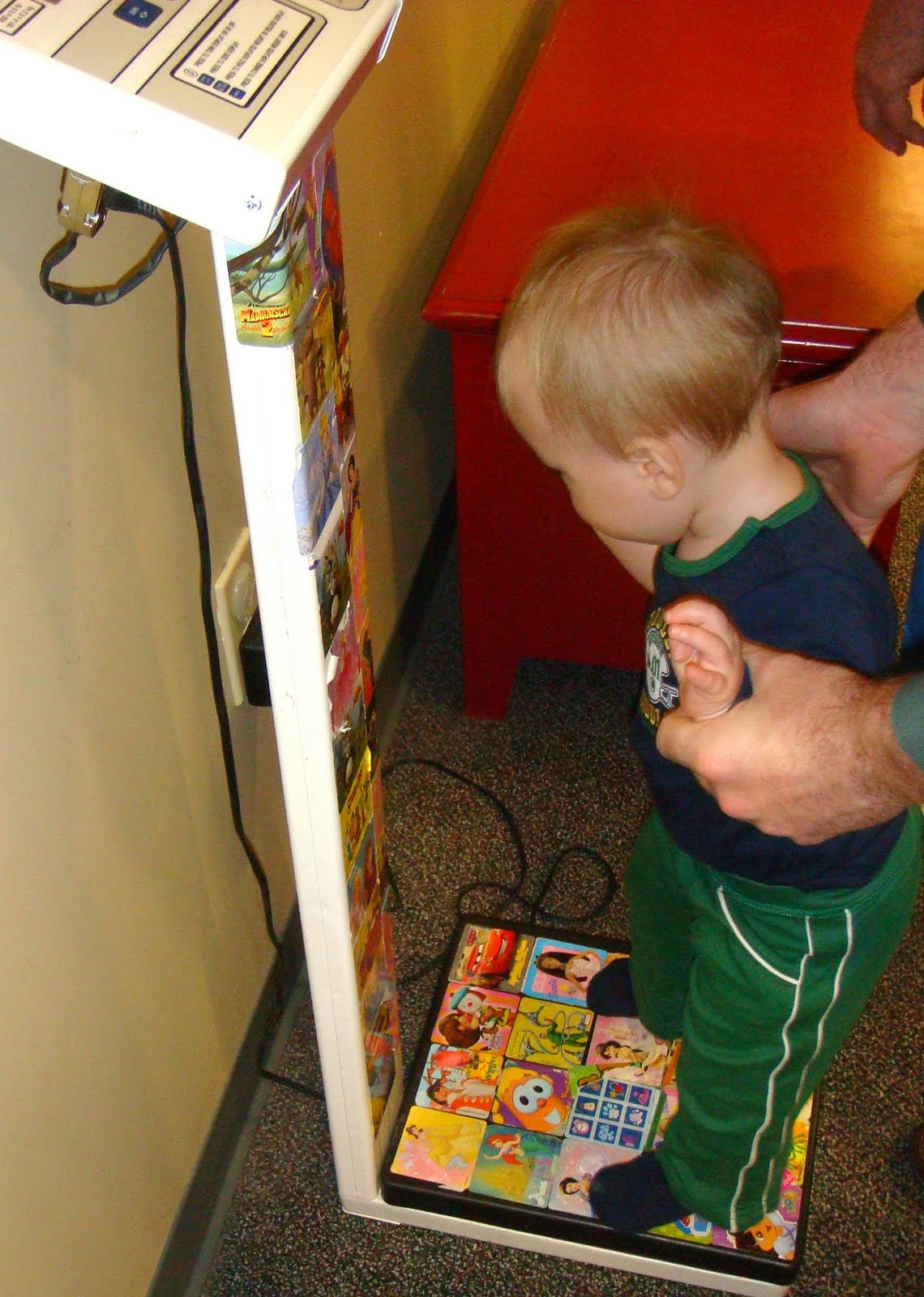 He did GREAT for the nurse when she did his exam. He just lay there and stared at her. I was very impressed with how well he behaved over all. He didn’t mind ANY of the poking or prodding, not even when they went in his mouth and ears! 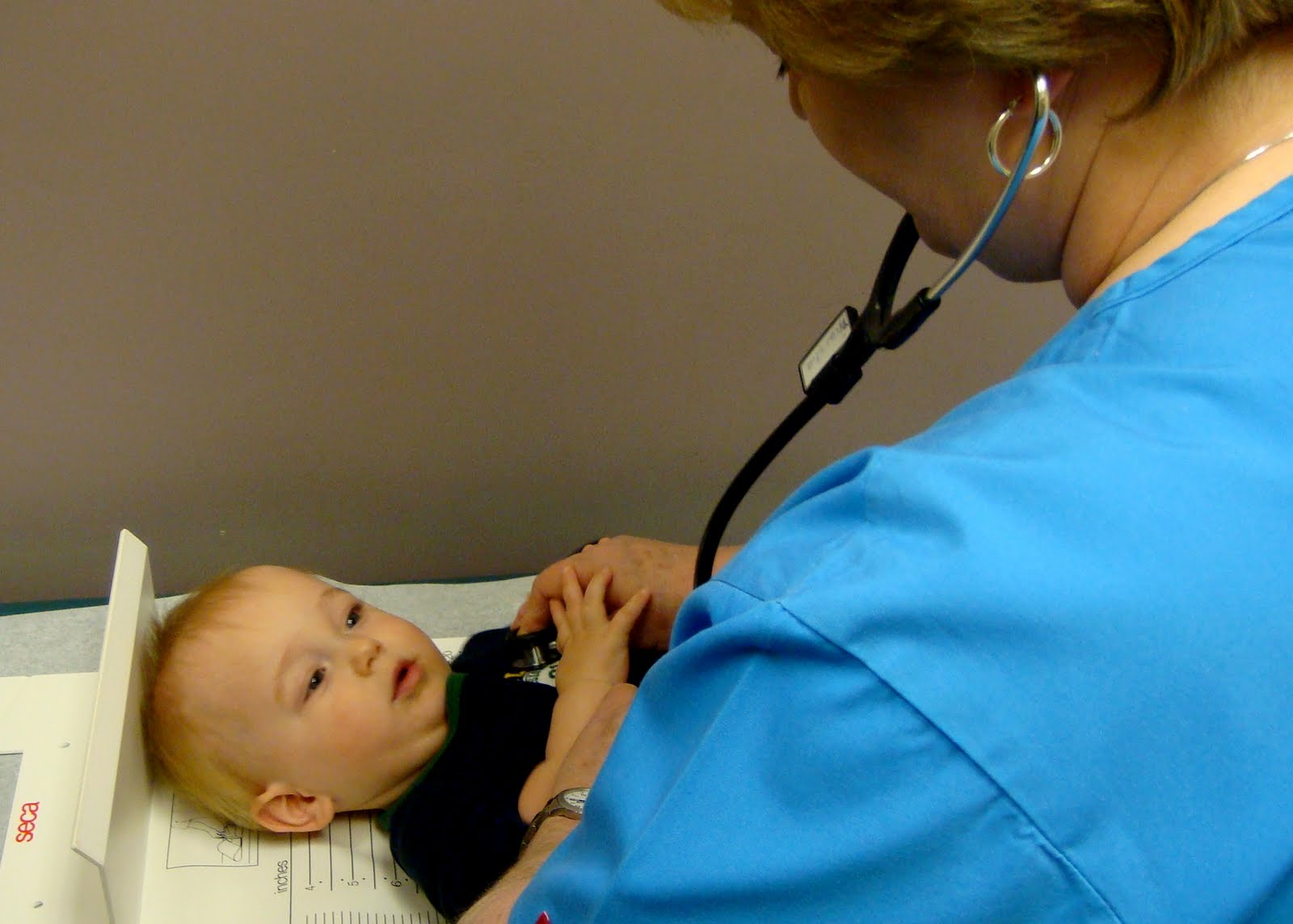 His stats at one year old are: 24 lb (75th percentile), 30 1/4 inches (75th percentile), and 18 3/4 inches head circumference (probably like 100th percentile haha but they didn’t tell me this one, just said his head is HUGE!). Did you notice anything??? YUP, he dropped from 90th percentile for height down to 75th! Daddy was not happy about that one. At the age of two you can double their height and that should be about how tall they will be when they grow up. Right now we at least know that Kye will be 5’1″ 🙂

We fed Kye his lunch and let him play on the floor while we waited for the dr. to come in. A baby was crying somewhere in the office and Kye laid down on the floor and tried to get through the door to help! So sweet! 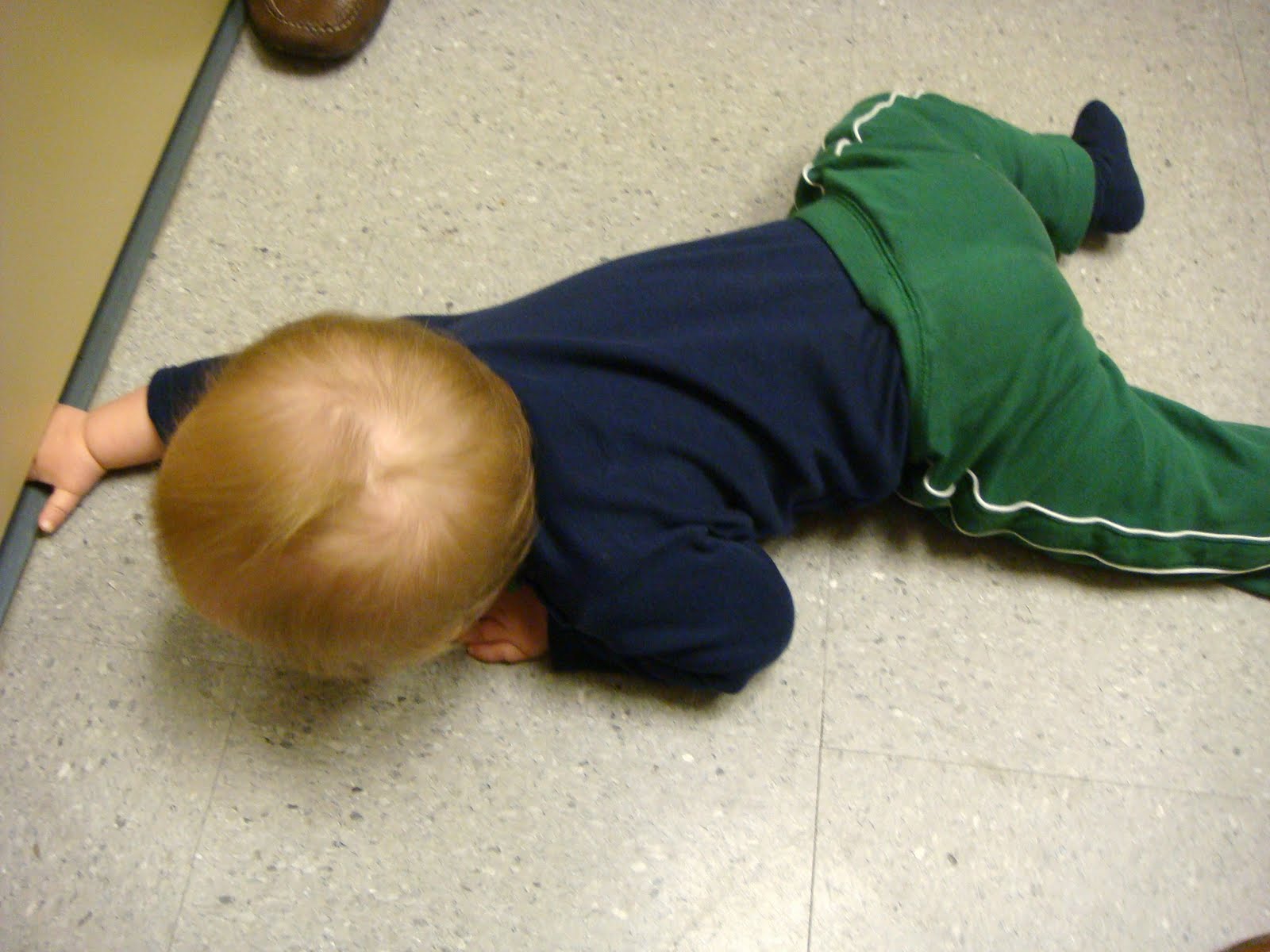 Yet again, we didn’t actually see Dr. Griner. This time we saw a guy (who simply said his name was Greg) who is doing an internship there. If my child had any problems this would bother me. And it does annoy me a bit but luckily Kye is perfectly healthy so I’m not overly concerned.

I brought a list of questions for us to go over and here are the answers I got:

1. Every night when we run the humidifier in his room (which is pretty much every night!) we have to lock Zeke (our cat) up with us and then open Kye’s door (the humidifier is a cool mist one and the directions say to open their door at night so it doesn’t get too moist in there or too cold). It’s very annoying. So I asked at what point is it “safe” for the cat to be in his room? Won’t Kye, at this age, wake up if the cat tried to suffocate him? Of course Greg (and even Stephanie when she came in just to make sure Greg did okay) didn’t want to say for SURE that it’s safe to leave the door open but he said he wouldn’t have a problem doing it if it were his own child. Like Zach said: a) doubtful the cat will want to jump in Kye’s crib b) very likely Kye would wake up just from the action of Zeke jumping c) extremely likely that Kye would hurt Zeke much more than Zeke would ever hurt him. So after the appointment if Zeke is easy to grab then I’ll lock him in our room but if not I haven’t worried with it too much!

2. Amount of whole milk Kye can drink? This annoys me. I like instructions to follow!!! But no, Greg’s response to this question was to tell me that my child is in perfect, flawless health (YAY me!) and that everything I’m doing is wonderful (yay!) and that I should just keep doing what I’m doing and follow my gut. Since most of you recommended 24 oz or less I’m now giving him an average of 24 oz or a little more. But should I give him other dairy too? Or is the milk intake enough to give him all his needed dairy a day?

3. Now that he’s one are there any foods still off limits? NO! That’s great news to me! He said if something is a new food to introduce it slowly but that he’s fine to eat fish, honey, nuts, strawberries, etc. I’d already given him pretty much all this stuff by now anyways but it was good to hear that I have the okay to do so. Zach and I have no food issues so it’s doubtful that Kye will either!

4. Stephanie “does Babywise” so I asked her about Kye’s 3:00 feeding and that now that he’s on whole milk if that should be just a snack of some food and water to cut back on his milk intake? She admitted she only did Babywise for about 6 months of her child’s life but that I could feed him “whatever” at three (I need to take time to look up this question but does anyone else know the answer?)

5. Kye’s been showing some baaddddd teething symptoms so I asked them to look in there and tell me if anything is about to pop through? NO! I can’t believe it! Greg said that he may be going to pop several in at once…should be funnnnn. He also said there is no concern about Kye only having 4 teeth right now.

6.  Does Kye need to visit a dentist now that he has teeth? A bunch of magazine articles have said YES but Stephanie told me (Greg didn’t want to answer this one) that no dentists around here will see them before age 3.

7. What’s Kye’s blood type? There is a spot in his baby book for it and I don’t know it! Does that make me a bad mother? Apparently not b/c they don’t know it either! They said that if he needs blood for something (God forbid) that the hospital ALWAYS checks the blood type anyway (even if it’s in the chart) so they don’t actually even know it right now!

8. When do we start having him use utensils himself? Greg said now! The sooner we let him start holding a spoon the sooner he’ll master it so Zach bought some Gerber spoons and we’ve let Kye (when we remember) “use” one when he eats. It mostly just sits there as he prefers his hands still but I’m sure as he gets older that will change.

9. Pacifier? I am so over the stupid paci but both Greg and Stephanie said that if he’s only using it in the crib then we’re WAY ahead of most people and that they recommend to wait until he’s 2 as that’s when the pediatrician recommends to get rid of it and at 2 he can better understand reasoning so when we say “big boys don’t use pacis” he’ll “get” it instead of just taking it away from him and him not understanding why. Blah. We’ll see…

10. Multivitamin? Greg said it wouldn’t hurt to give him one as it benefits all of us to take them (I take Women’s One-A-Day do you????). I went to Target as I remember seeing a pretty large children’s vitamin section and I got him Enfamil Poly-Vi-Sol with Iron liquid. I don’t feel comfortable with giving him a vitamin made for children as he’s still too young for that so this is made for infants and toddlers. I have to get in the routine of giving it to him but the first time we did he liked it and it’s packed FULL of vitamins and minerals and has 100% of his needed vitamin D and iron!

After talking with Greg and then Stephanie Kye got his shots (so I waited out in the waiting room!). This time he got a Varicella and PCV. Varicella is the chickenpox vaccine…isn’t that funny they give that now? I remember having the chicken pox and always thought of it as some right of passage or something but Kye will probably never have it! The nurse said that the Varicella one is the most painful of any shots he’s had so far but he did very well with it (he did not, however, do too great once we got home…post to come!). He also had his toe pricked to check his hemoglobin and again he was in the normal range but at the lowest end of the normal. I guess that’s fine though?

Overall it was a good visit. It was SO nice hearing over and over from Greg how perfect our child is and how everything I’m doing with him are the right things to do! A self-esteem booster for sure! The only “tough thing” was the way Greg responded when we told him Kye’s not walking yet. Once we said he’s cruising Greg felt better about it but it’s still hard telling people he’s not walking. It’s the FIRST time Kye’s not been “ahead” with stuff like that and so it’s tough when that’s the FIRST thing people ask now! It’s always “is he walking yet?” “no not yet…” “really? how old is he?” He still isn’t showing signs of being ready so we’re just patiently waiting and not pressuring him 🙂 He’ll walk eventually I’m sure!