Here’s an update on what’s new during Kye’s 13th week of life (making him 13 weeks old today!) Not much new, but some cute pics!

I took this after nursing him in Brunswick…see how FAT he looks right after eating? Fat and Happy! 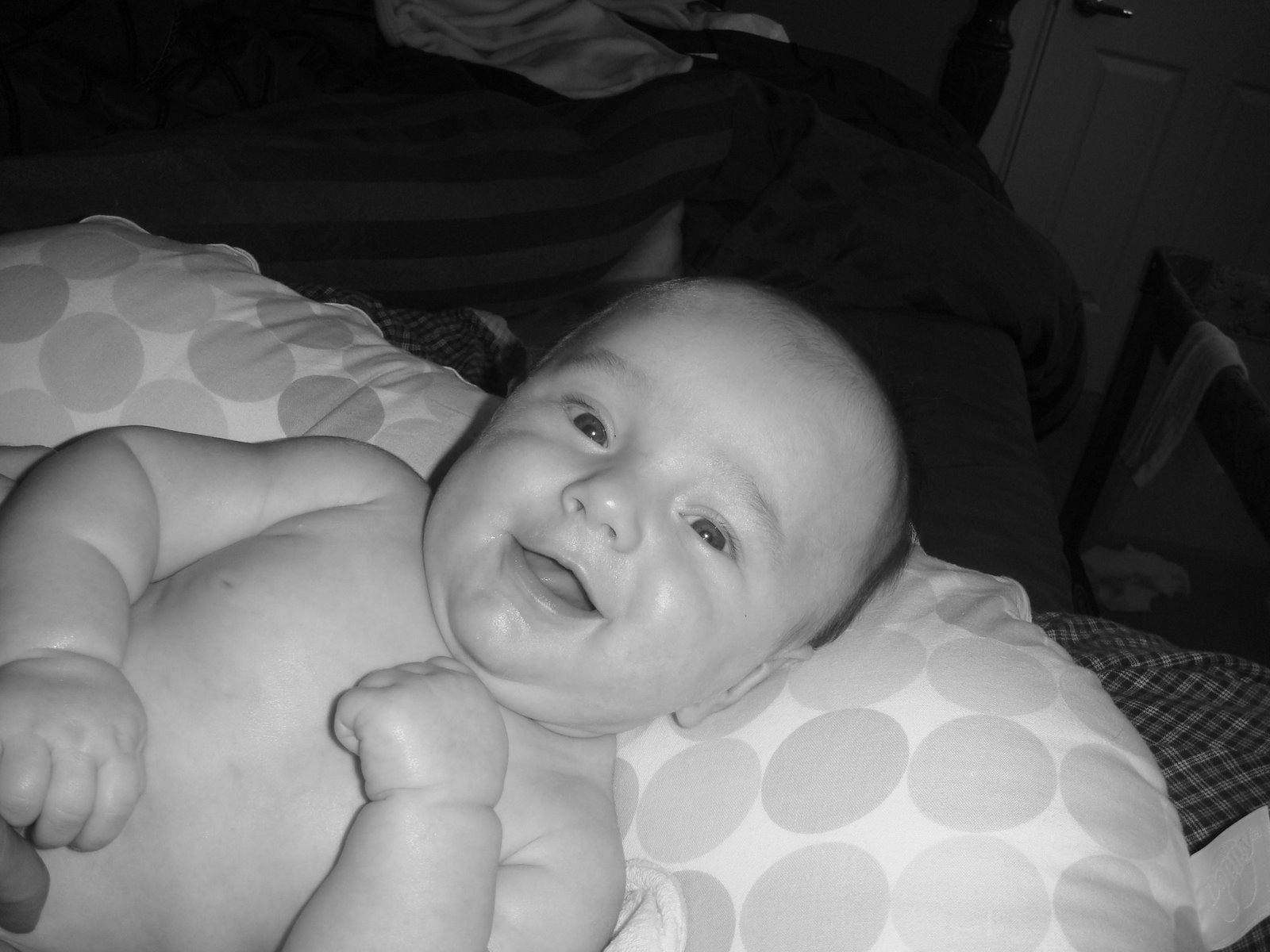 I knew Kye’s been losing hair but I didn’t really realize how much! I was using my new camera (expect WAY more pics thanks to that thing! I’m loving it) and I noticed in his crib that his sheet is COVERED in his hair! Gross! 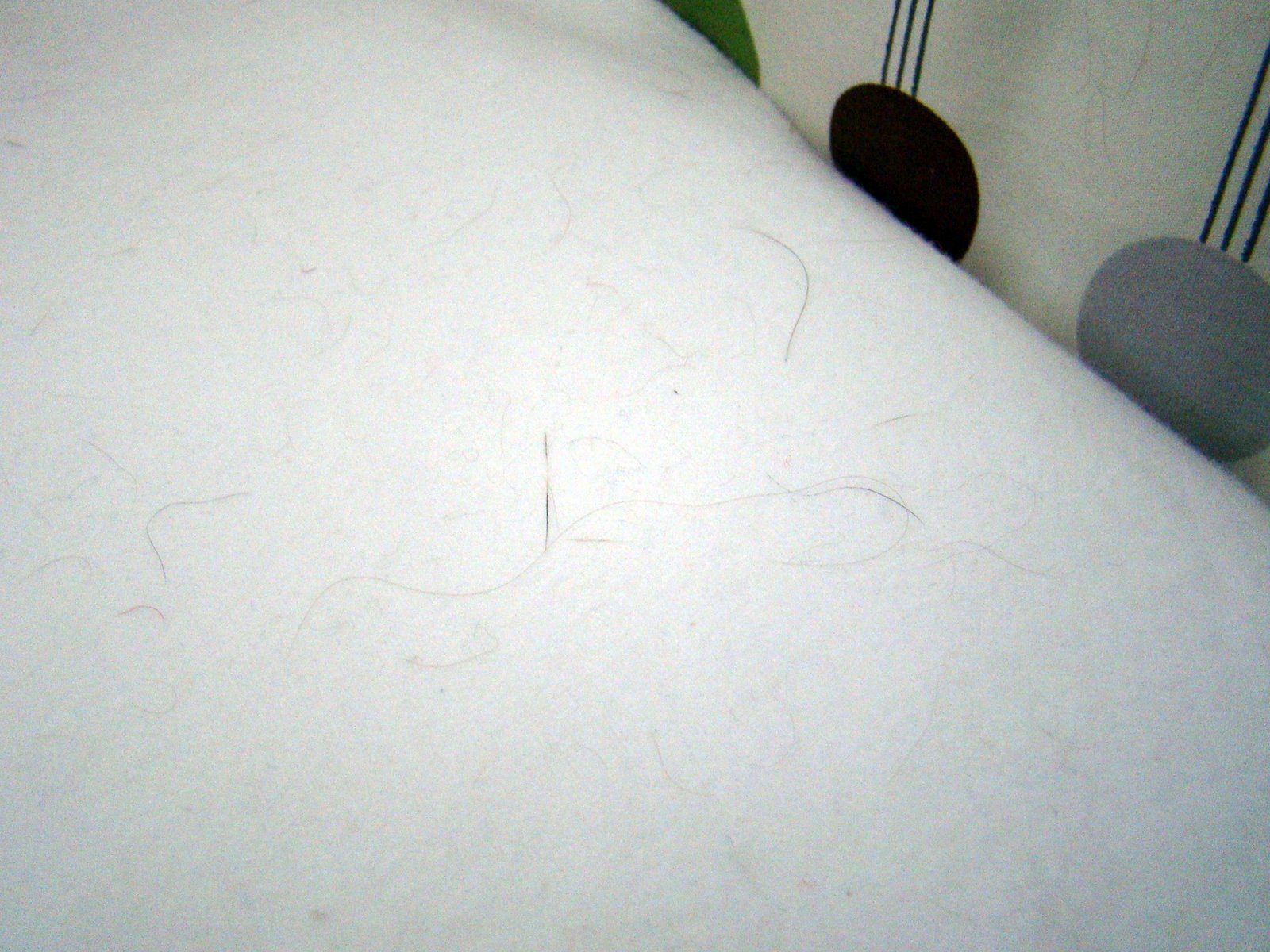 Poor Patches haha! He’s not just bald in the front, like you can see in all his pics, but he’s also lost a lot in he back. I know it’s normal and I know it’ll grow back so I’m not stressing! 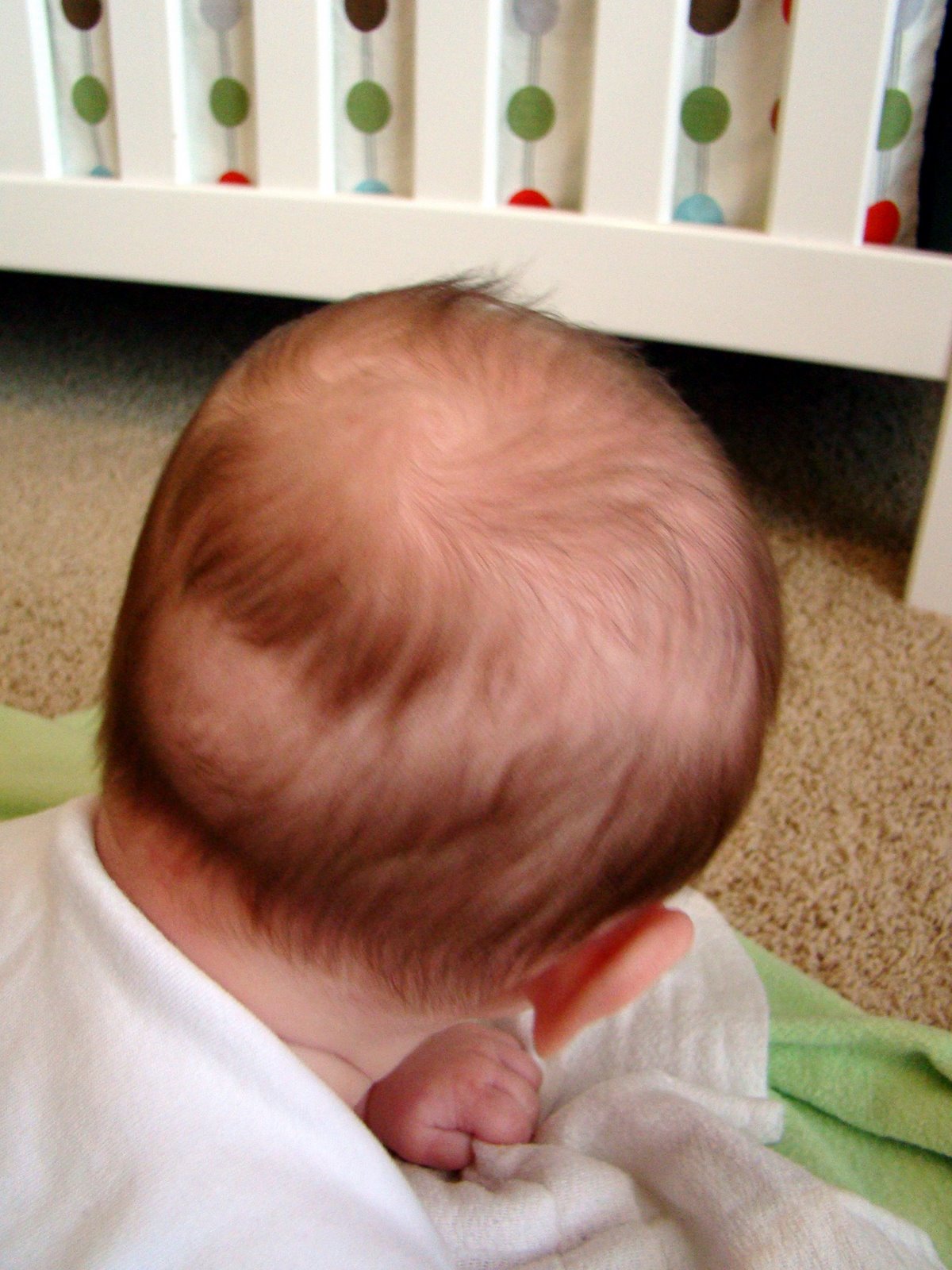 Doesn’t every mom think their child is sooo precious when sleeping? 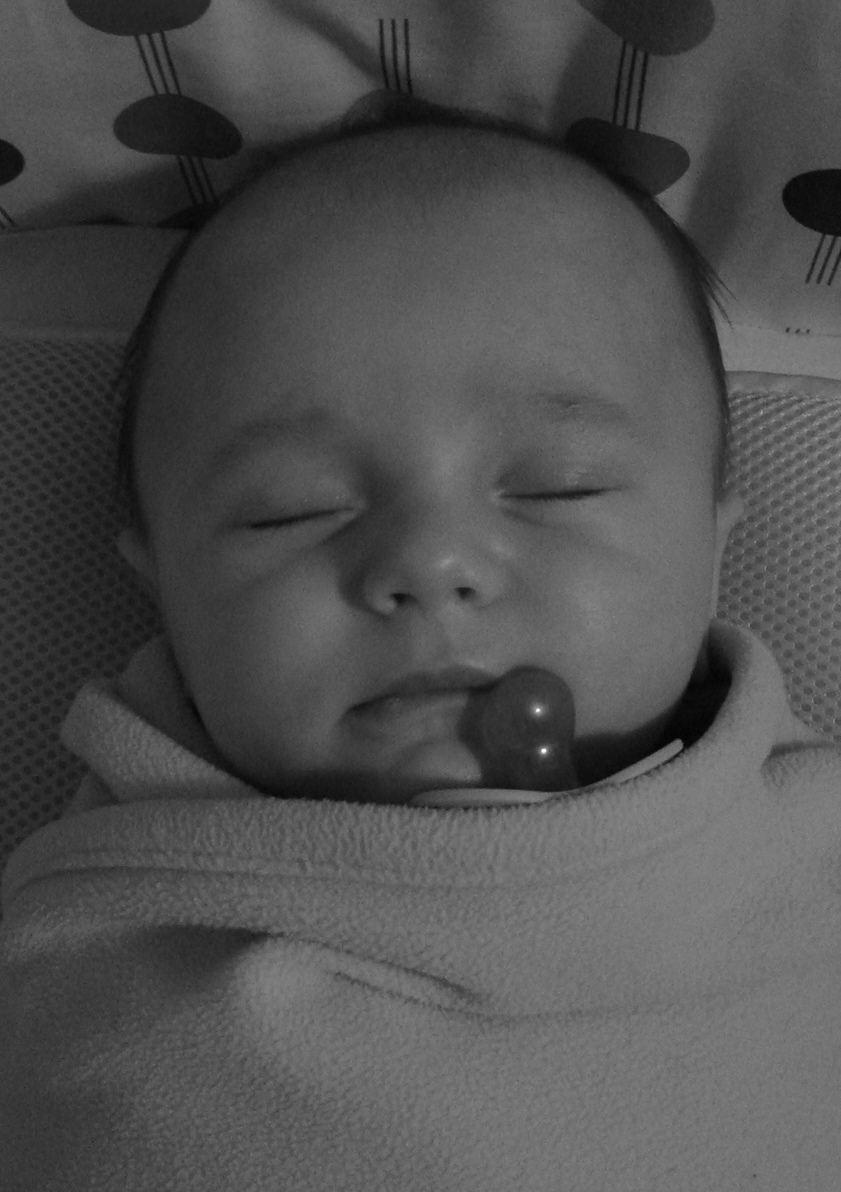 He’s been having some bottle eating issues this week which worried me. He would NOT take a full bottle while we were in Brunswick and would sometimes take an HOUR to finish it! So annoying! I started thinking of reasons why and realized the first time he used his new “big boy” bottles the new nipples to go with them were too fast of a flow so I switched them with his regular slow nipples. Well now when he nurses he finishes SUPER quick! Like 20 min total! So maybe he needed the faster flow nipple? I was right (as usual haha) and here he is trying it out! He still acted like he didn’t want the last ounce or so but Zach played with him for about 10 min and then he wanted to finish it! 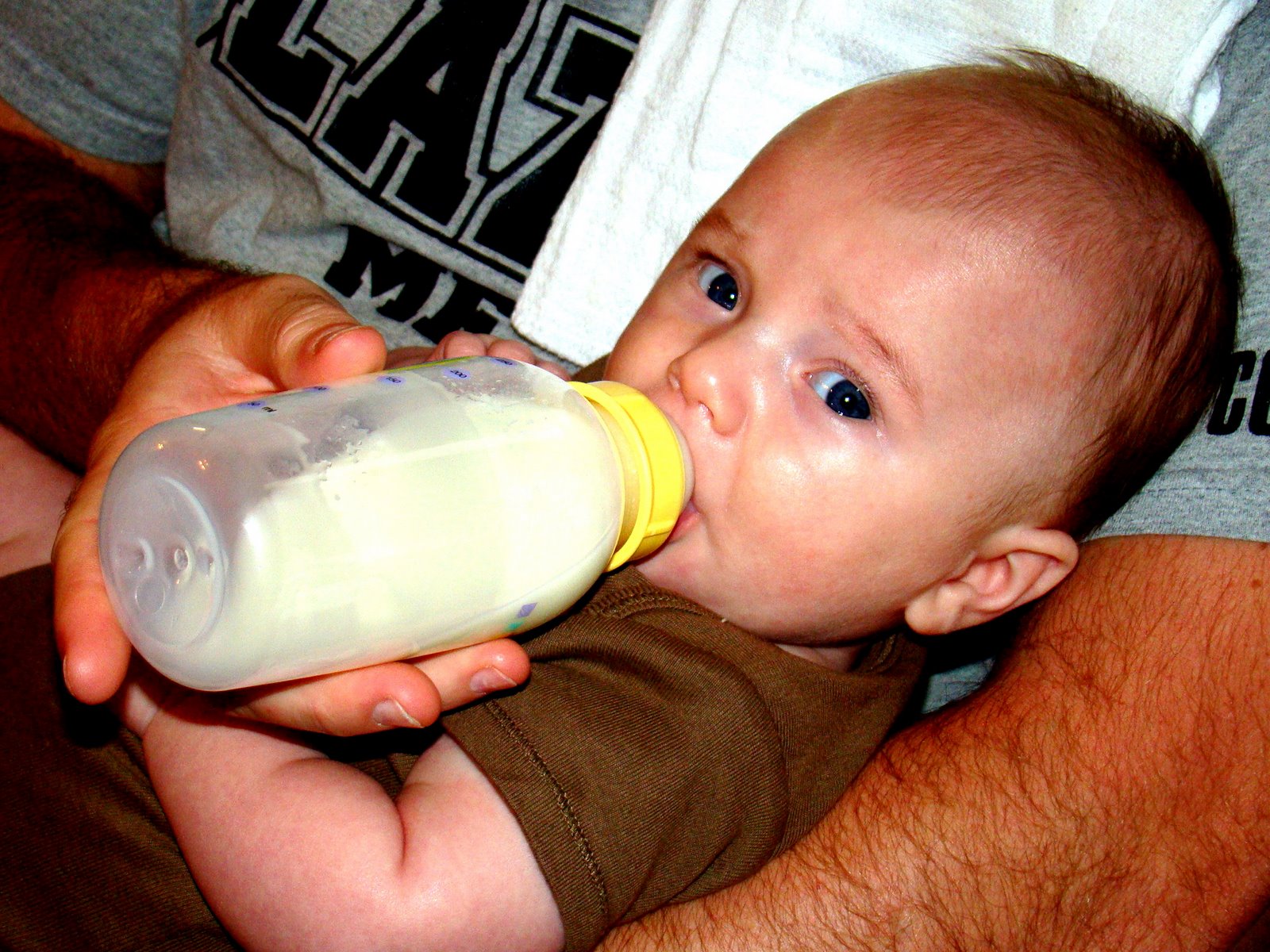 Another thing with his bottles have been his hands. He’s all into them now and will push them in front of his face which makes bottle feeding difficult. I’ve been reading Babywise II about when he goes in his high chair and how to start teaching him manners. It talks about not allowing children to play with their food (I totally agree with) and to teach them to keep their hands in their laps unless they are using their hands to eat. So we thought we’d go ahead and start kinda using the termnology we plan to use then. We decided “hands down” would mean for Kye to put his hands in his lap. So when he gets his hands in the way of the bottle we say “hands down” and put them down then will hold them down if we can! Not that he’s picking up on it or anything but “they” say the more you do those type things the quicker they will learn them! 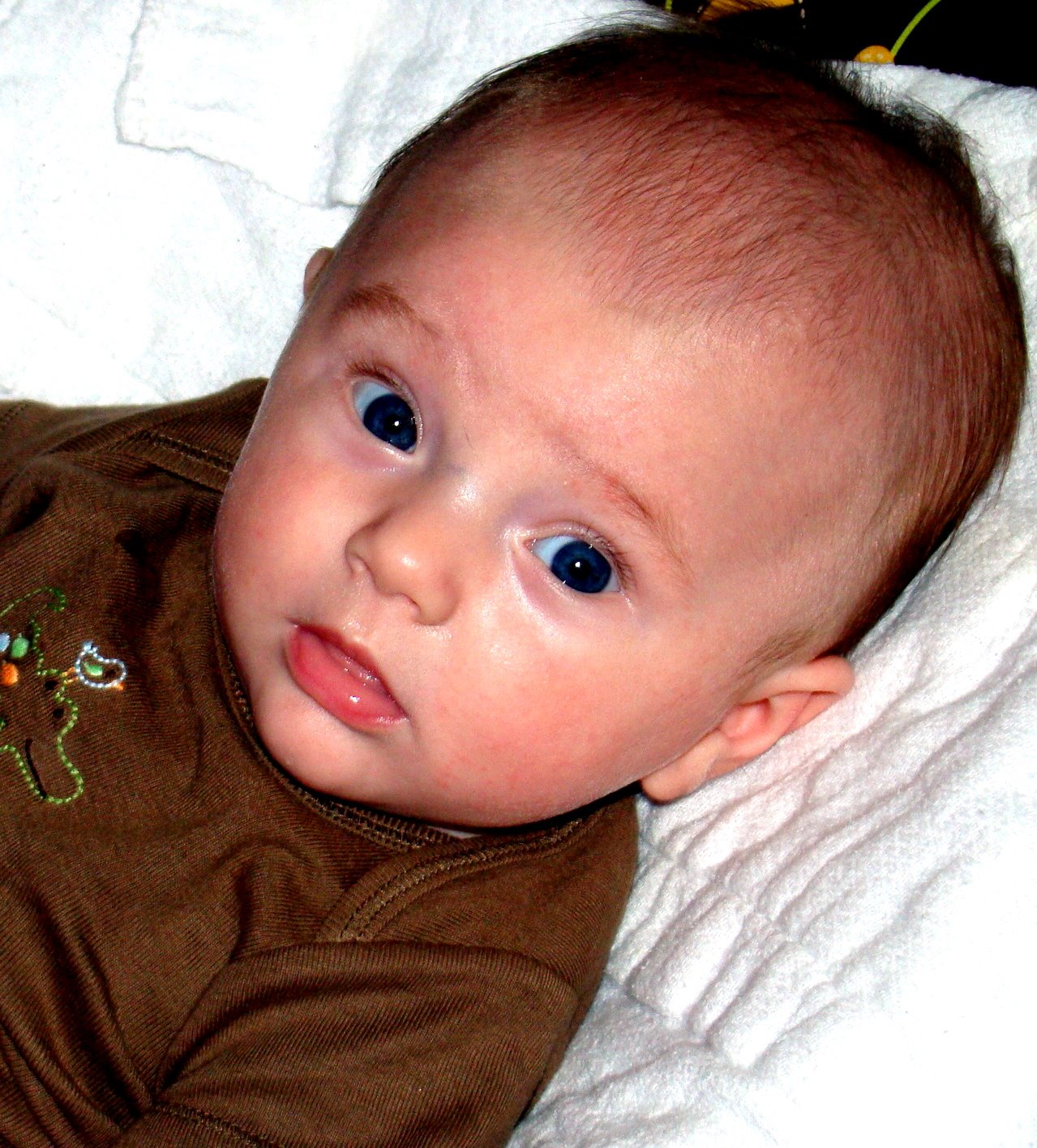 Well, we’ve only done it once but I LOVE it! I get up every morning at 7:00. No questions. It doesn’t matter what’s happening during the day Kye eats at 7:00 and starts his day then so I do as well! Often Zach will go back to sleep at 7:00 and stay in bed until he needs to for work or until 8ish. I know it shouldn’t matter but it often annoys the crap out of me!!! Again, something I need to work on!

We’ve wanted to start taking family walks for awhile now. We have a super pretty neighborhood and know the benefits of Kye getting outside often but it’s SO hot during the day and by the time Zach is home from working we have to eat dinner, do things around the house, and get Kye to bed. We really don’t have the time. Zach thought of a great idea and we went after Kye’s 7:00 feeding (so at like 7:30) it was PERFECT! Not hot, not too bright, and a GREAT way to start the day! I hope we keep it up 🙂 I love little family traditions! 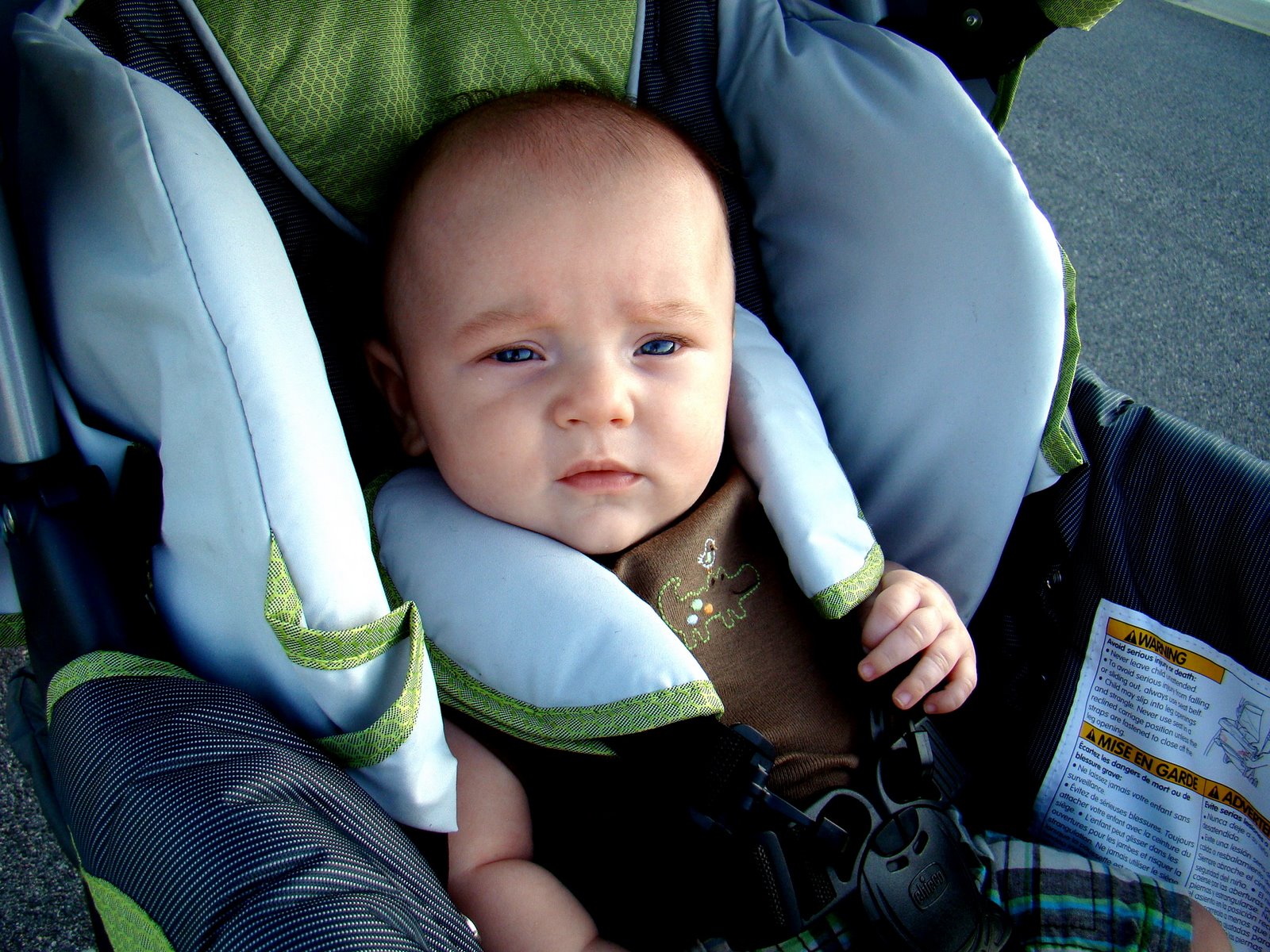 He looks like he’s saying “come on guys let’s go!” 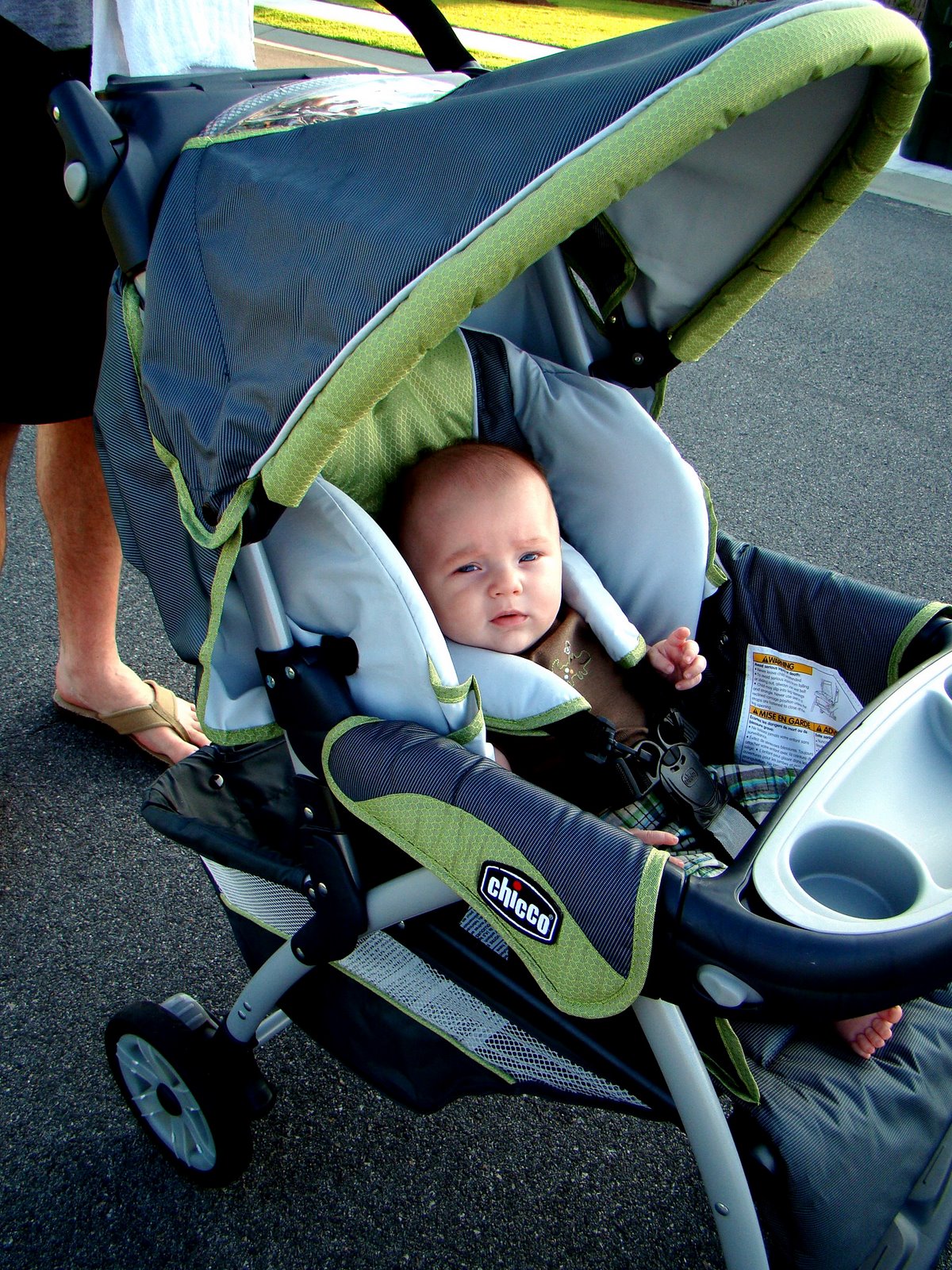 I’ve always said that I wish I could give birth to a two year old and skip the baby stage. I know most people say they LOVE this age and I always thought it’d be BORING. Well, I admit it! I was wrong! This week I realized I LOVE the age Kye is in right now! Before he was kinda (no offense son) boring but now he’s so much more fun! He’s eating quicker which means he gets to play longer and I love all our moments together. I do already have that feeling in my chest where I don’t want him to grow up! AND I get why people hurry up and have kids sooner b/c they miss the sweetness of this age…Kye doesn’t know how NOT to be sweet! I love it! 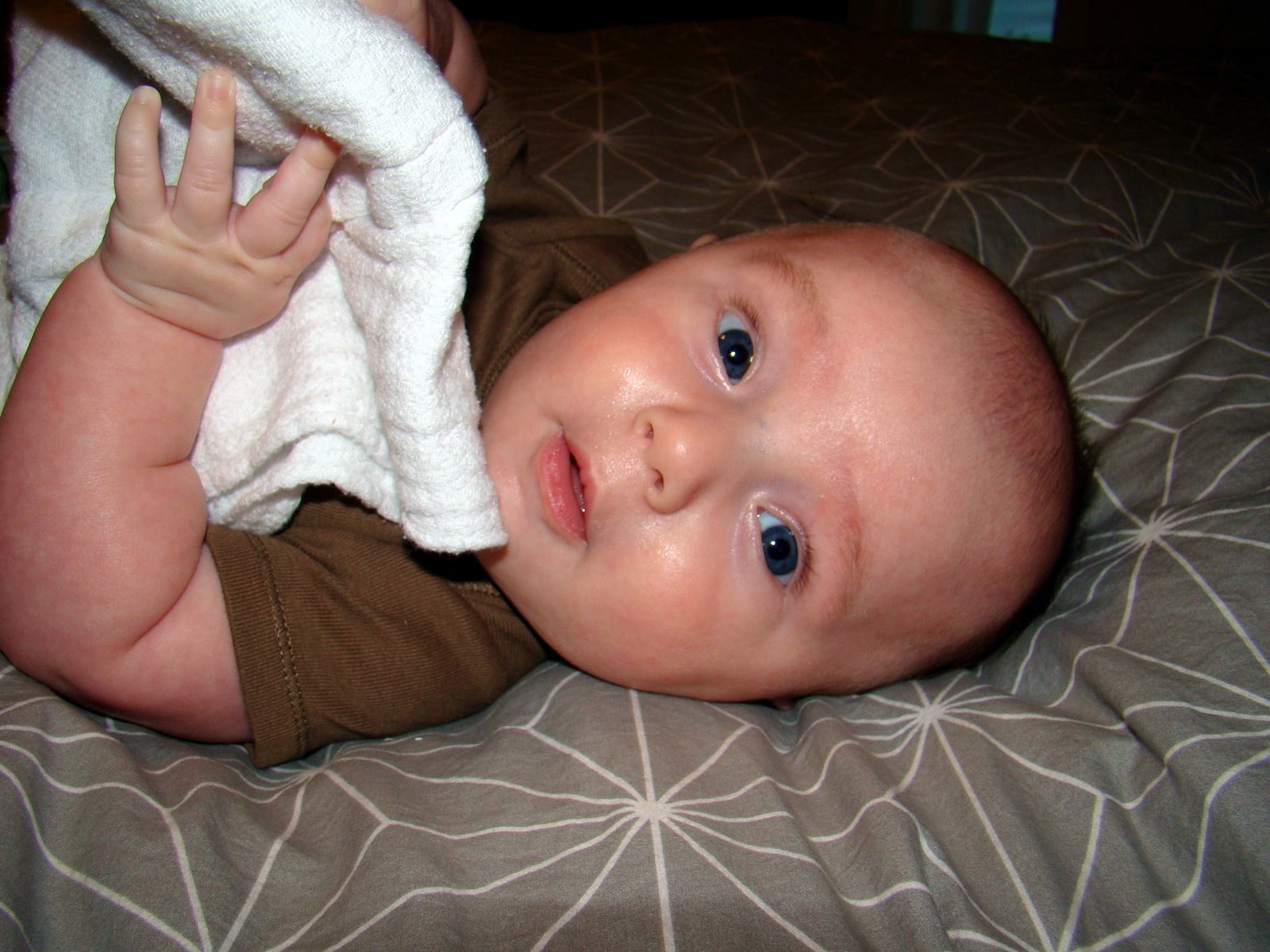 Even though it appears that Kye’s losing more hair by the minute it already looks like some new is growing in! Doesn’t it look like that here? I wonder what color it will be? Zach and I were both blonde kids (which I hear is called tow headed? what a strange name for it! I don’t get it!) so we kinda assume that’s what he’ll be but we’ll have to wait to find out 😉

Oh and btw…he’s rolled over once this week…not a record but at least we know he didn’t forget how! 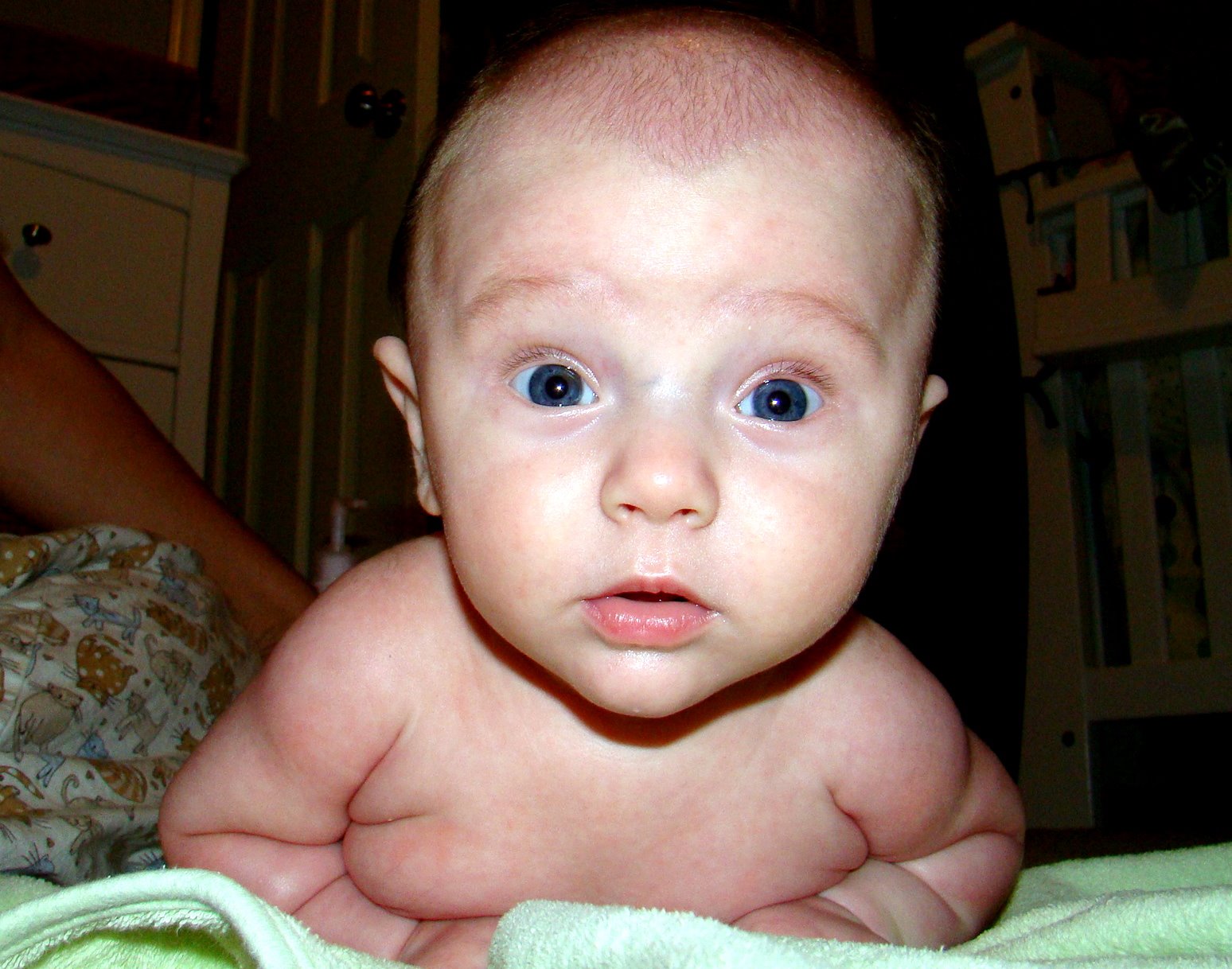 He’s “talking” more and more and more. He’s LOVING to use his mouth and especially that tongue! He has figured out how to blow air and loves blowing “rasberries” and making bubbles in general 🙂 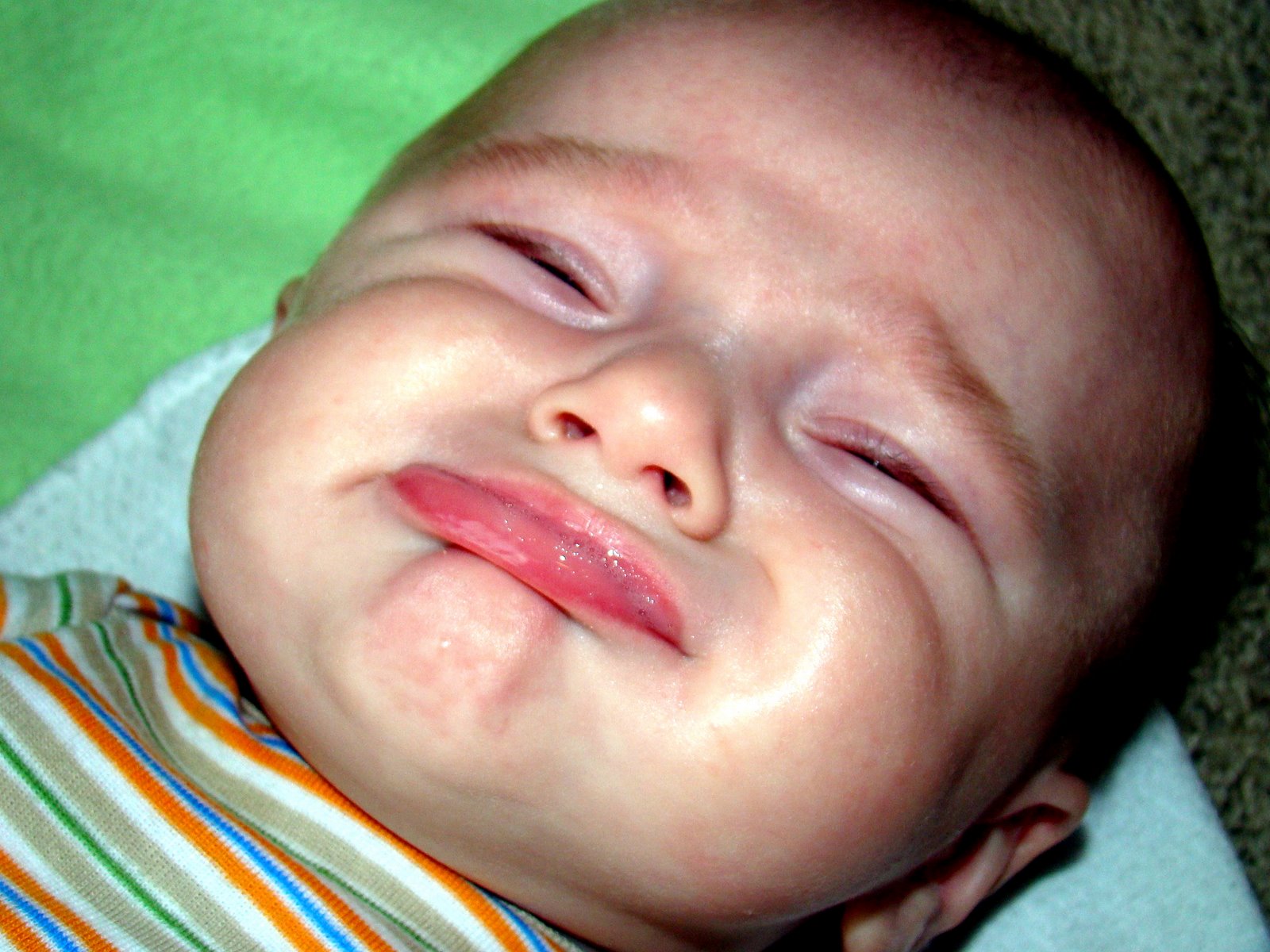 When he talks he makes the FUNNIEST faces! I love them! 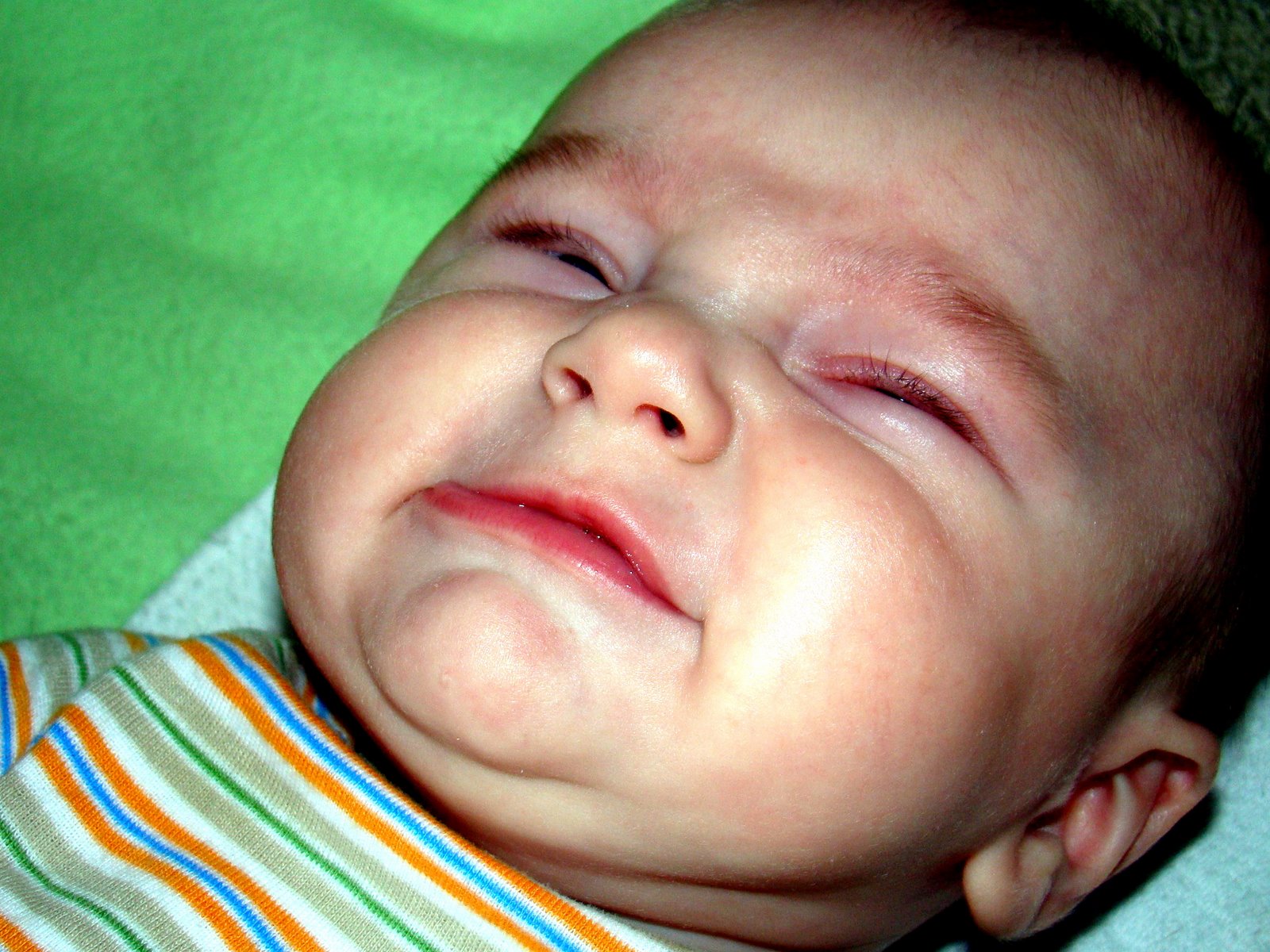 It’s official, we have a drooler! It’s gross but unavoidable and it mixes with his puke so it makes the puke look runny and less white. SO nasty! When do they grow out of that?

I know Sadie and Levi’s nails grow pretty fast but DANG! I literally have to trim and file Candler Kye’s nails once a week!!!! They get long and sharp very quickly, but at least he doesn’t mind me doing it! 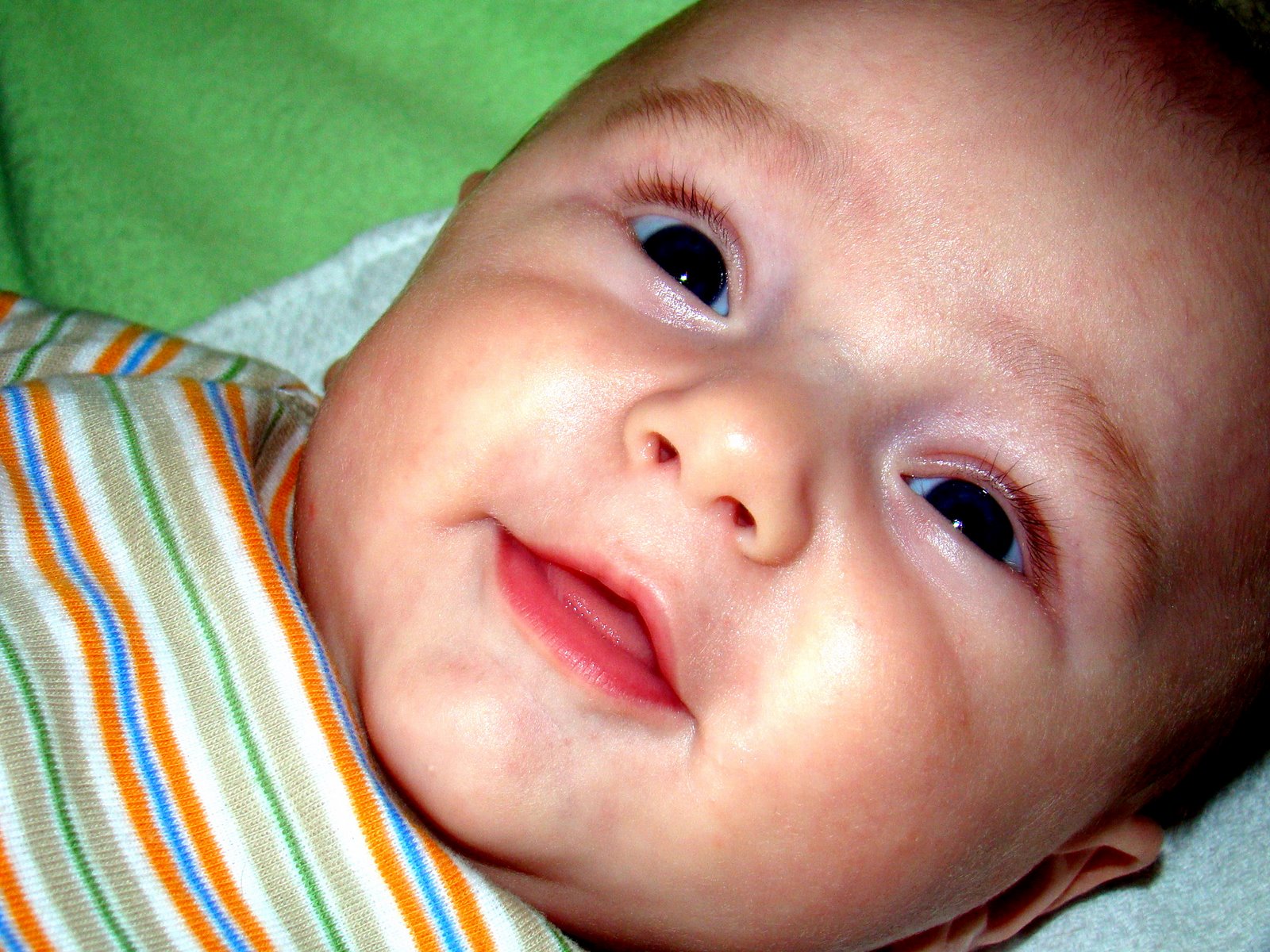 I lost 1 1/2 pounds this week! Yay me! I consider that a pretty big win seeing as we’ve been traveling and the Hiott’s had SO much GOOD food at their house! We’re traveling AGAIN this weekend so we’ll so how I do but I’m pretty proud of myself for sticking so strongly to this diet and I think it really will be a lifetime change for both Zach and I! 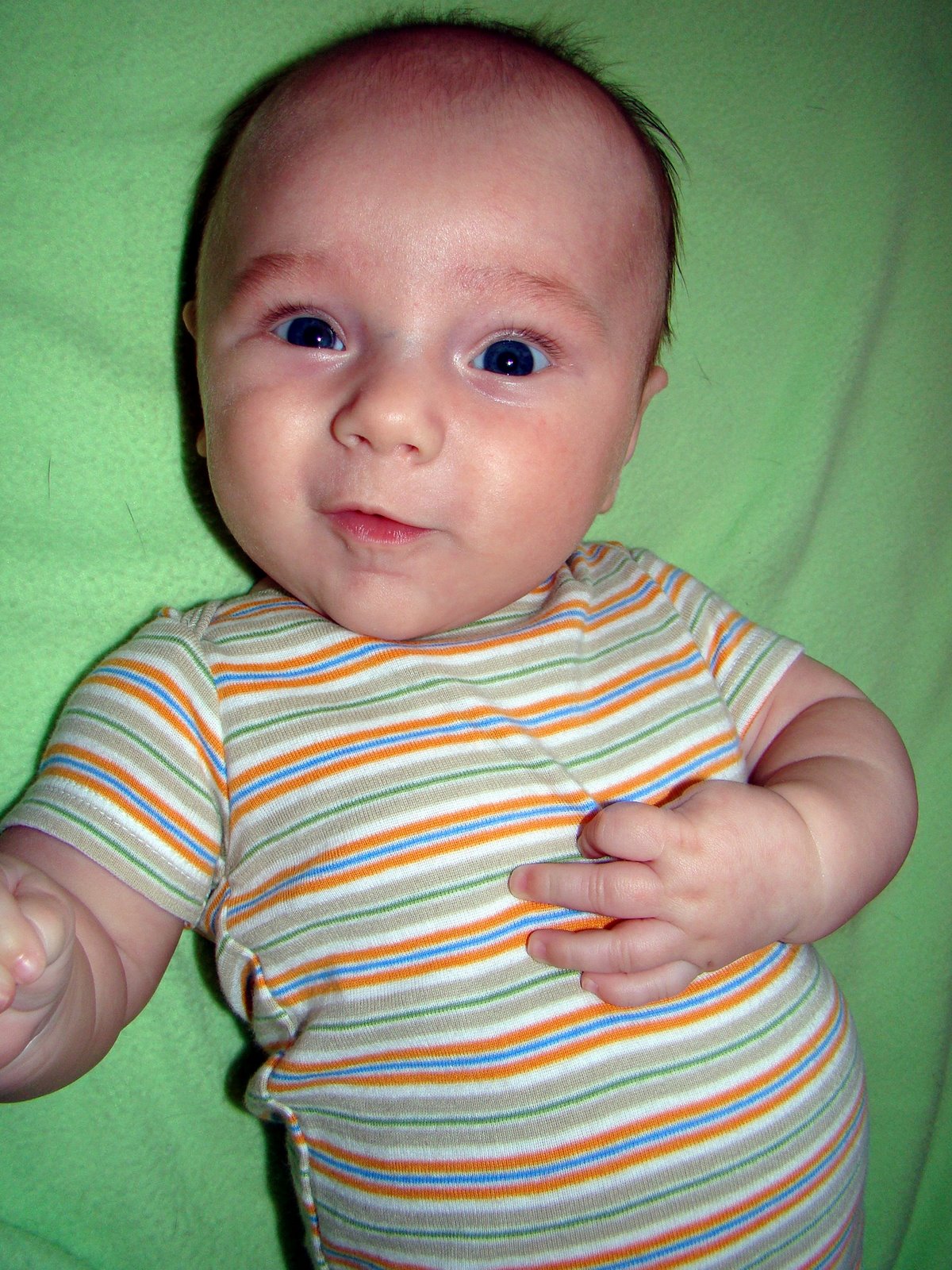