Tomorrow I will be 39 weeks pregnant! I usually don’t take pictures of my tummy every week but this week you can really tell a difference. If you compare these to the ones taken last week you can tell that the baby is lower for sure! 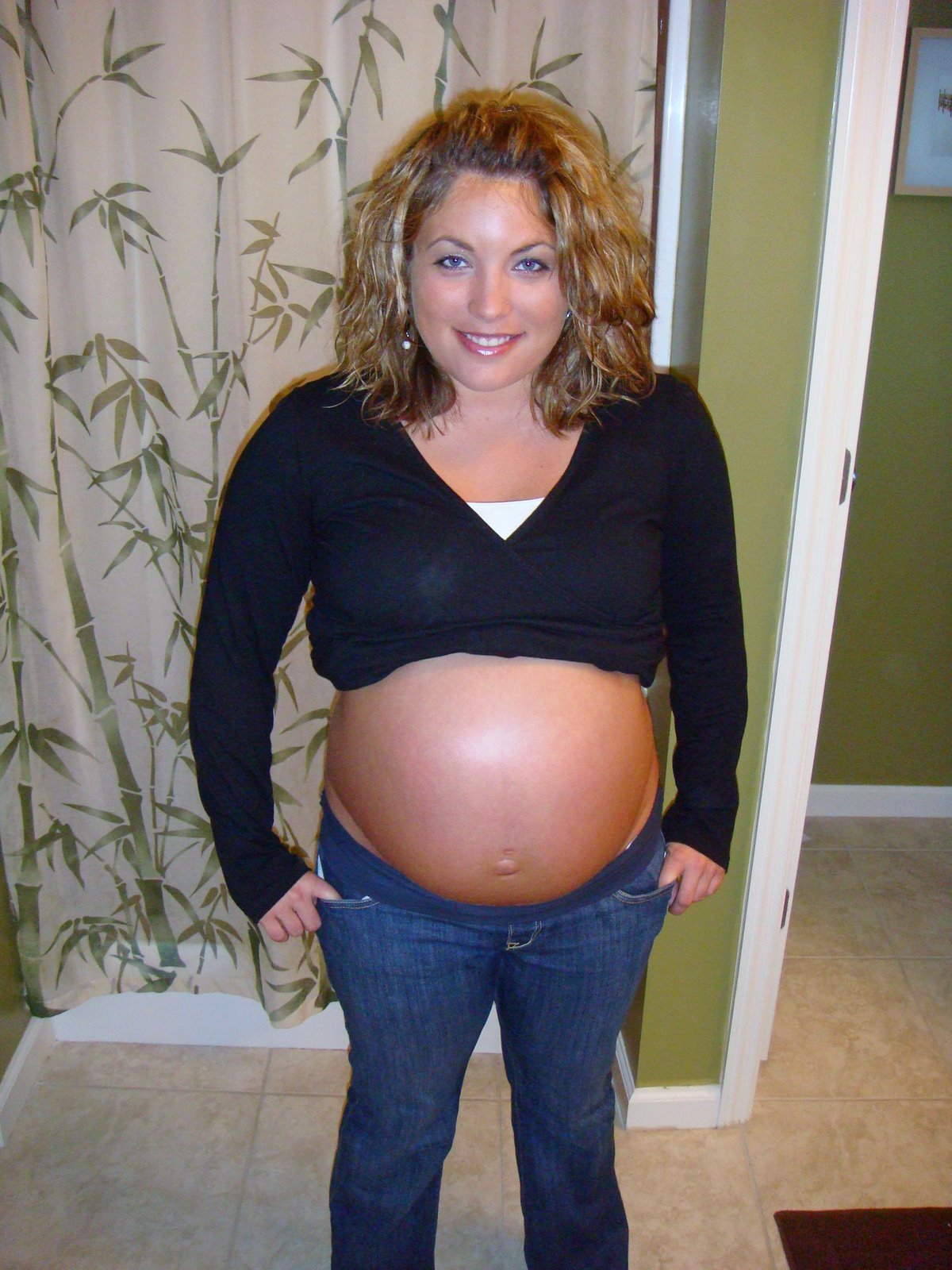 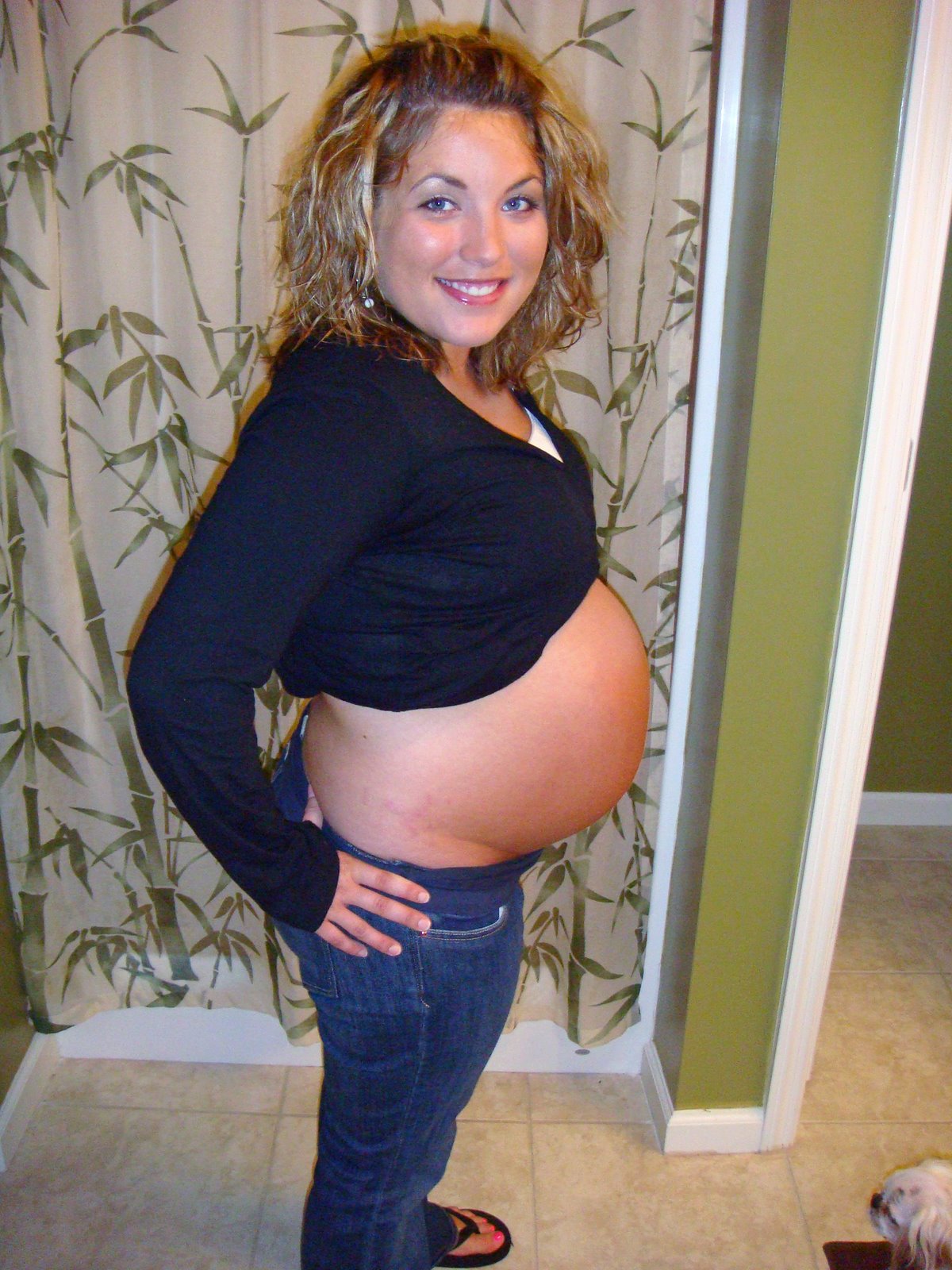 Some changes I have noticed this week:

This morning I had my 39 week check up. I saw Vickie because Stacy is out of town. I also went alone because Zach had a meeting he couldn’t miss for a potential new Aflac group. I’ve only been alone one other time…and it was my worst appointment ever (when the dr. got all mad at me for gaining 10 lb in one month). So I didn’t expect this one to go to wonderfully!

She did comment on how much leakage I have. She said it seemed like quite a bit and she ran a couple of tests, but they both came back negative so at least it’s not amniotic fluid. I also described the pains I’m having and she said that’s normal since the baby is so low and weighs around 7 1/2 pounds now so it’s putting a lot of pressure on my pelvis. She took the heartbeat and said that looks good (in the high 140’s) but it was interesting because they ALWAYS find the heartbeat on my right side and this morning it was on my left…

I pretty much begged her to do the membrane sweep thing and she said no. She asked if Stacy did it and I said “I want her to” haha so not really lying! But she said I can come back Monday and Stacy will probably do it for me then (I know she will).

She checked me. And. Nothing. Has. Changed. I put on a happy face but omg seriously? After ALL the stuff I did! While I didn’t necessarily think any of the “tricks” would put me into labor I did think they would HELP my body prepare a little more! And plus the baby HAS dropped more! So how in the WORLD can the station position thing still be -1? Very, very upsetting. To add to my heartbreak she said “You could go into labor tomorrow, or you could go a couple weeks late.” thanks lady.
I have an appointment with Stacy, thank the Lord, on Monday. Her earliest was 3:30 and I took it because I just need to see what SHE has to say! I think she’ll be surprised that I’m still pregnant when she gets back. We all thought I’d have this baby while she was out of town. We were wrong.

To say the least, I bawled the entire way home. I just have this bad feeling I’m going to go late. I mean most 1st time pregnancies do so that’s “normal.” What will I do with myself for 2-3 more WEEKS? I’m done trying crap to get Clover to come out. DONE. How much TV can I really watch? I am a person who travels A LOT and I have a desperate NEED to get out of Valdosta NOW. But I’m not allowed to. In between my tears I thought “Zach and I should just go away for the weekend that will make things better.” But we can’t go anywhere! I’m super tempted to break the rules on this. A mini-vacation would be Heaven for me right now. There is nothing I can do to fill my time and I’m a stay-busy type person. I’d love to go shopping but 1) we have no extra money and 2) what the crap would I buy? Not maternity clothes! And I can’t imagine buying stuff to wear after I lose the weight! And we don’t know the sex so no baby clothes either.

I really didn’t think it would get like this. I had a pretty smooth-sailing pregnancy for so long. I was able to still be ME while being pregnant and I never sacrificed doing the things I wanted to do. But here I am with NOTHING to do. Feeling Miserable! It makes me disappointed in myself for allowing myself to get this way, which only makes me feel more miserable and upset. I doubt I’m going to go to the Student Center tonight. Even though it’s free food I just can’t bear the thought of people making little comments. It’s so opposite! I am DYING to get OUT and DO SOMETHING but I just want to stay home too! So strange!