This morning I had my first weekly exam. After the interesting stuff I went through on Monday after Walmart, I was pretty curious to see what Stacy would say! Since Monday night I have still continued to have more wetness (a word? probably not) down there and (I’m graphic, deal with it as I want to be able to remember this kind of stuff for next time!) when I go to the bathroom it feels different when I wipe. It’s like when I wipe the toilet paper kinda slips “up” there more than it naturally should…it’s like “opps!” haha.

I’ve also been feeling more contractions, nothing regular but sometimes they will be pretty intense. Those started on Saturday when we went to BabiesRUs but I do still feel them off and on, at least a couple times a day.

I weighed myself and I shouldn’t have haha! I gained 3 lbs in ONE WEEK. Crazy! I’ve now officially gained 34 pounds total, yikes. I can gain one more pound and still be considered where I should be weight wise..I think I might just go over that don’t you?

Anyways, we listened to the heart and it sounded good, she said in the 140s-150s. Then we talked about how Stacy is going to be out of town from Feb 28th through March 7th. Gah I’m dreading that!!!

Then she did the internal. It was a great chance for me to practice some Bradley relaxation techniques as a) I heard that internals are horrible and b) I always always always clench up super bad during my yearly exams so I knew I’d do the same thing naturally this time too! And yay for me I did so great (I feel bad because Zach said he was trying to hold my hand but I didn’t see him..I was too focused on my task). I stayed relaxed and it wasn’t all that bad. She even applied pressure on my stomach with her finger “in there” and it didn’t bother me.

She acted shocked as soon as she started the exam! Stacy is a pretty serious person, which I like as I am too, but she acted out of character the way she responded. She said I’m still “tight” down there (which is a usual for me anyways) and only 1 cm dilated. But she said she could feel the head and that it’s so so so low! She also was shocked that I am already 80% effaced! I had no clue what she was talking about haha. She told me that it is measured from 0%-100% and it measures how thin the cervix is. We want it to be 100% at some point and she said most people at this point in pregnancy are lucky if they are 50%. Pretty awesome I guess! She also said “so basically it could be a couple of weeks or it could be tomorrow.” I kinda brushed this off but Zach said later “she didn’t say it could be a month!” haha I guess that’s good news!

I also told her about my experience the other night and she said I was right not to worry as it wasn’t my water breaking but that she does think it could have been my mucus plug. She said I would spot some today after the check-up and I have..my first time spotting the whole pregnancy 🙁

Once I got home I was all curious about this effacement stuff! Here’s a diagram: 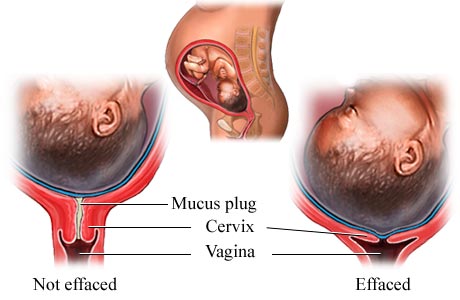 So since I’m so far along with the effacement, it makes sense that my mucus plug would be gone already! Also I had this little sheet that I’m supposed to keep on me at all times to take to the hospital when I go into labor and it has my stats on it. I noticed she wrote 1/80%/-1. I knew the 1 meant 1 cm dilated and the 80% was effacement but she didn’t mention the -1. Duh, I googled! The -1 is called the station and it rates how low the baby is! -3 is high, -2 lower, -1 lower and 0 starts the head in the birth canal then -1 is in the canal etc. So really the head is super low and almost where it needs to be for this junk to get going! She did say that the head shouldn’t move anymore which makes me feel great to know we won’t have a breach baby!

I am trying very very VERY hard not to get excited. I don’t want to sit and think that I could go into labor soon then be sitting here blogging about how frustrated I am 3 weeks from now. Crissy came over today (they are having another girl! I totally called it! I’m so pumped for them!) and brought me the hooter hider she made me (soooo cute I love it!). We chatted for an hour or so and I love talking to her! It’s so great to have someone who has been there done that and who knows so much about breastfeeding! She’s an AWESOME Mom and I adore Stevie! I really hope and pray we get closer once our baby gets here, I adore her and Seth both and so does Zach (and we all know couples are hard to find!)

Anyways we started talking and I told her how far I am and all and she said a bunch of her friends started doing the little tricks to self-induce at 38 weeks. I’ll be officially 37 weeks tomorrow and Stacy will be leaving for out of town during my 38th week. So do I start trying? Pretty tempting. Zach and I have a loooong list of things I want to get done before the baby is born so I am thinking we may knock it all out this weekend and then Monday maybe start doing some tricks. I know Stacy said before that those things may or may not work but even if they only start Braxton Hicks that even having those helps the cervix get ready for labor. Anyone have any advice here?

Here are the “tricks” I have heard of: sex, walking, pedicures, pressure points, caster oil, and primrose oil (I know nothing about this Crissy mentioned it to me). I’d love to hear anyone else tips that they used or that they heard worked! I talked to Zach about it and he agrees that we start trying early on next week as he has a gut feeling I’ll go into labor naturally on the 28th which is when Stacy is gone. Plus if my due date IS wrong then I’d really be due a couple weeks sooner anyways so in that case tomorrow would be the start of my 39th week…so it’s okay to mess with it right?