Last year Zach and Britt skipped out on the Father Daughter Dance (hello, she was like 2 months old haha) but still did a little photo shoot together which you can see here! This year the dance was on Saturday Feb 9th. I wasn’t sure if Zach would actually want to attend the legit dance or just do a little night of quality time with him and Britt. The tickets for the dance were $10 each which is pretty dang steep…but he surprised me and said he wanted to take her! Score 🙂

The early session of the dance started at 6 so we planned to feed her dinner early and bathe her early so they could go to the dance then get home and she could go straight to bed. With church the next morning we didn’t want her to be over-tired or anything! It was also a CRAZY day for Kye with two birthday parties and such so Zach stayed at the house with Britt to make sure she got her needed rest in order to be in the best mood possible for the dance 🙂

I didn’t go out and buy anything special for Britt to wear…I happened to have this dress that I got on sale. The Children’s Place has AWESOME deals on fancy dresses after major holidays. Best time to hit them up is after Easter and after Christmas! I buy dresses in future sizes. Even though it’s colder out right now I just threw on a cardigan and some tights and she was good to go 🙂

Our day was actually SO PACKED that we ended up not getting pictures of them together before the dance. Which I hate because she was in an AWESOME mood. Instead they wore the same outfits the next morning to church and we snapped a few before services. But…Sunday mornings Britt has to get up early for nap and we are in a rush so she was not nearly as fun as she had been prior to the dance the day before 🙁 Oh well! At least we have some pictures of them in their matching outfits and I’m sure next year will be even cuter! 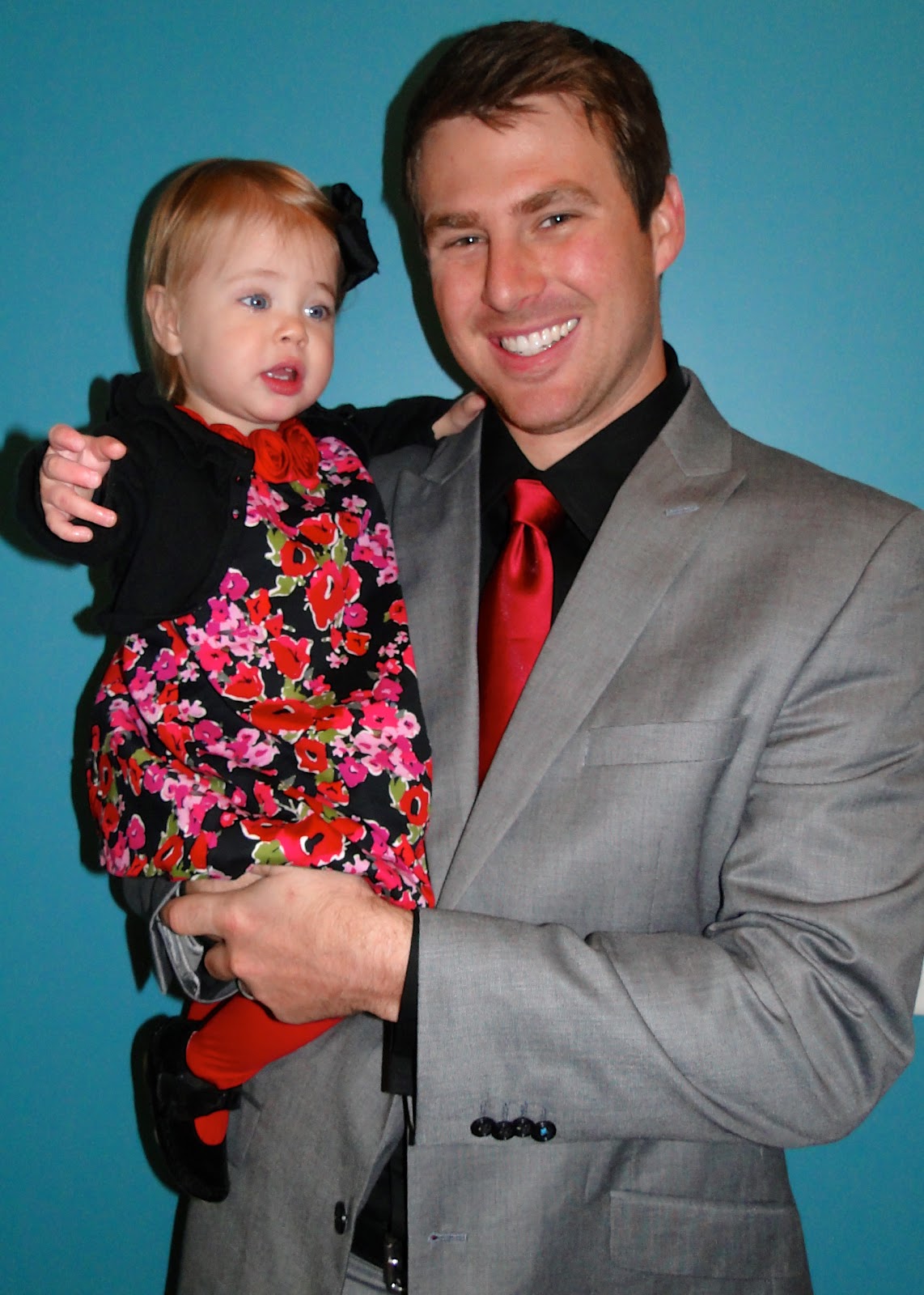 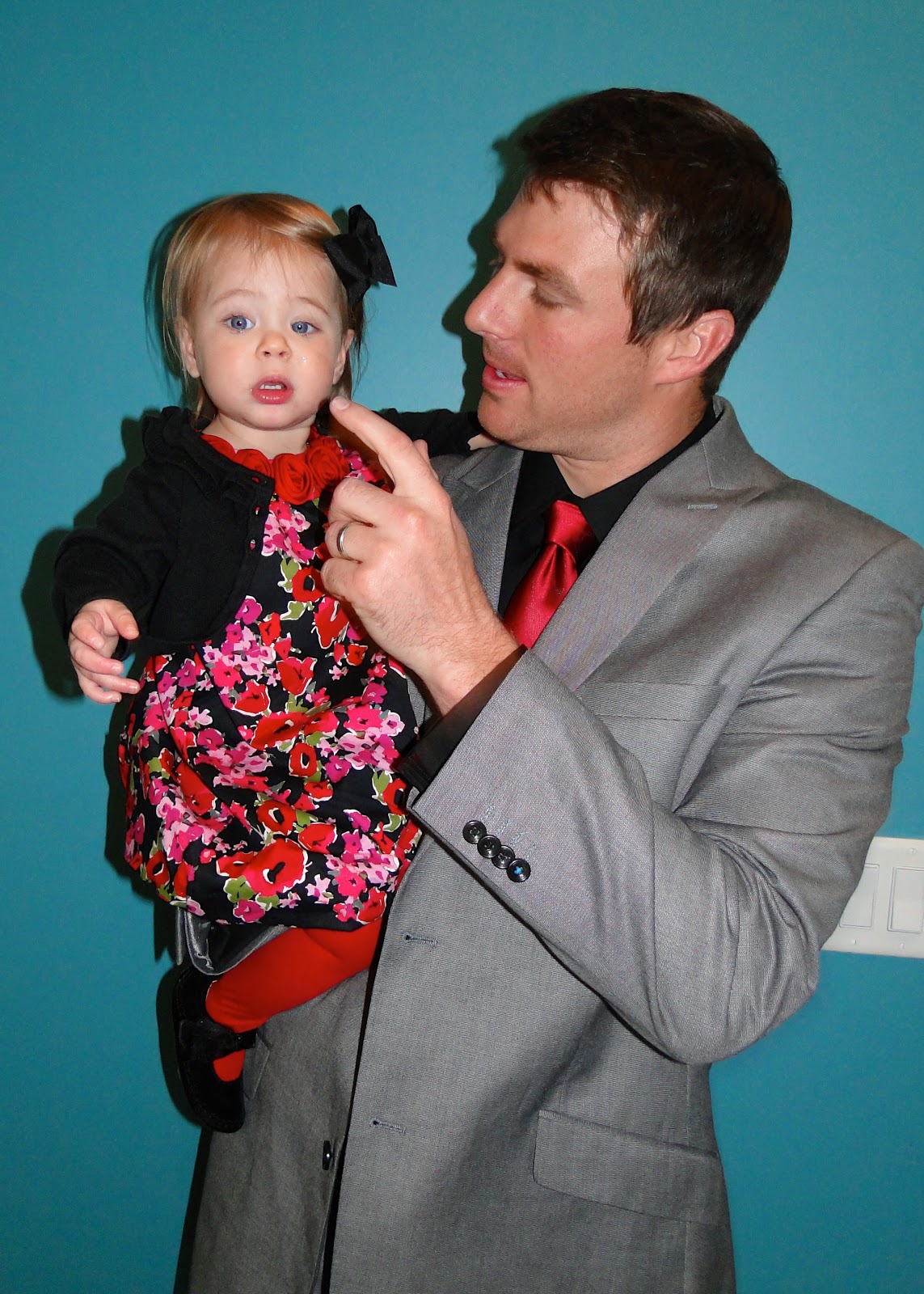 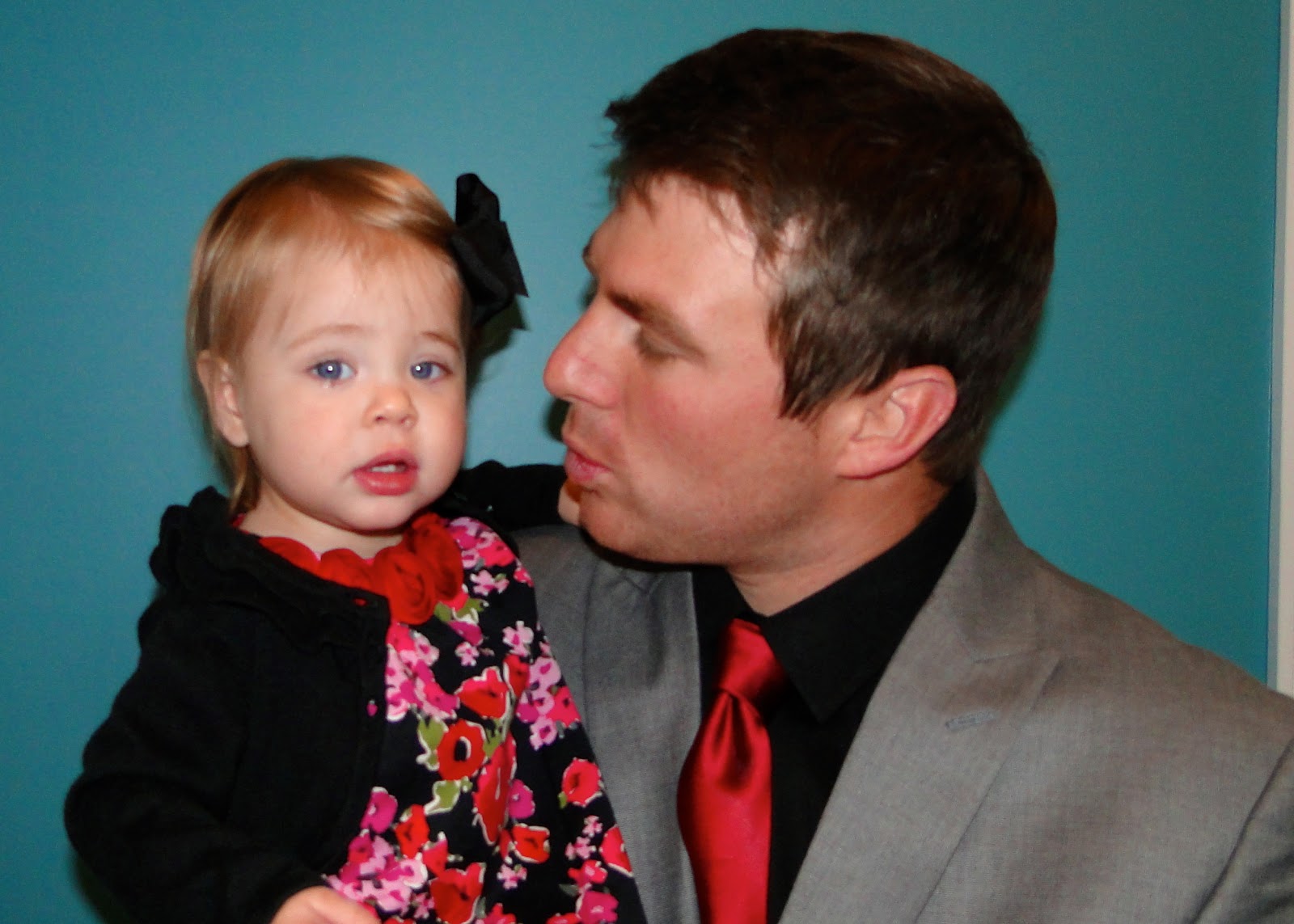 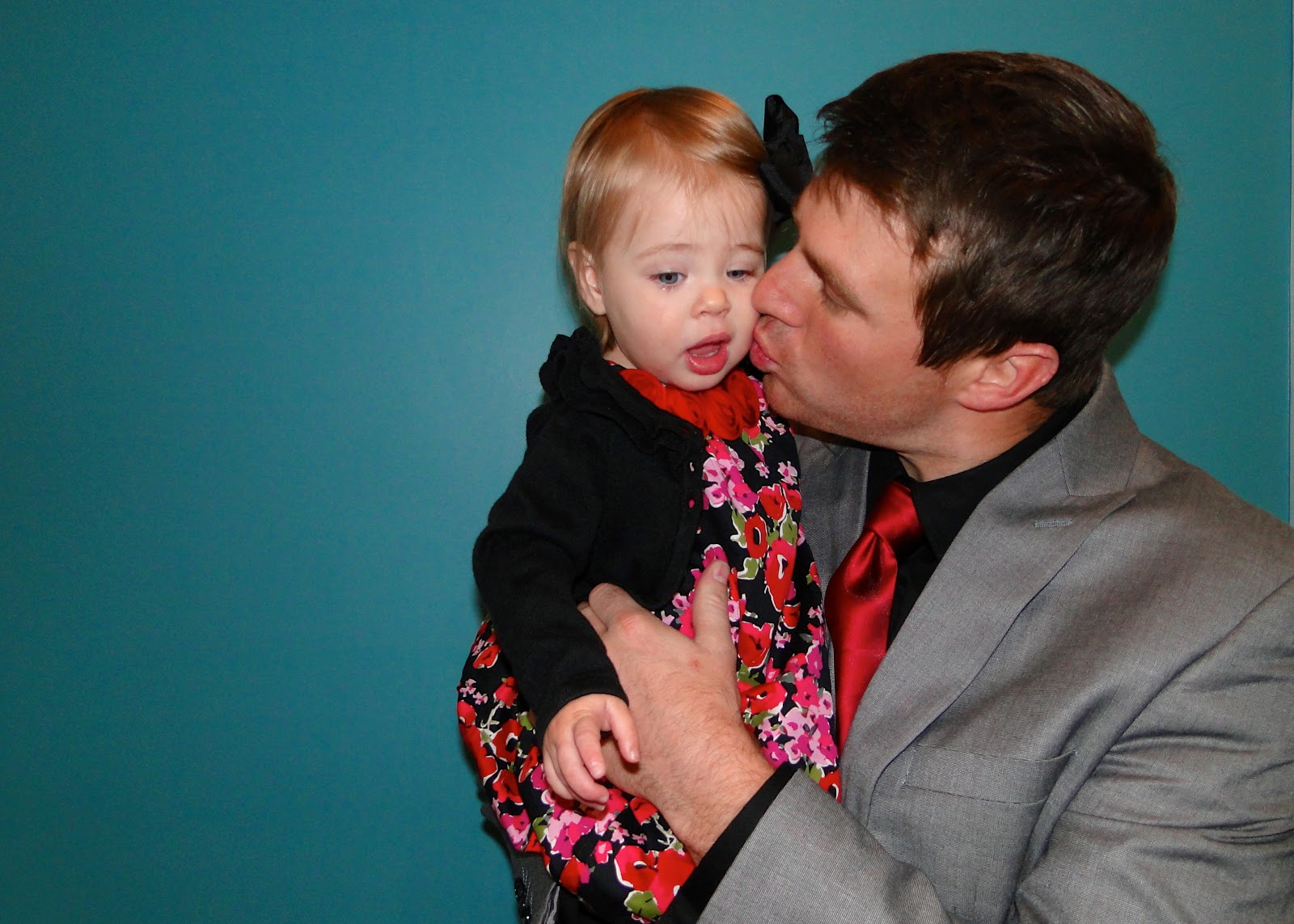 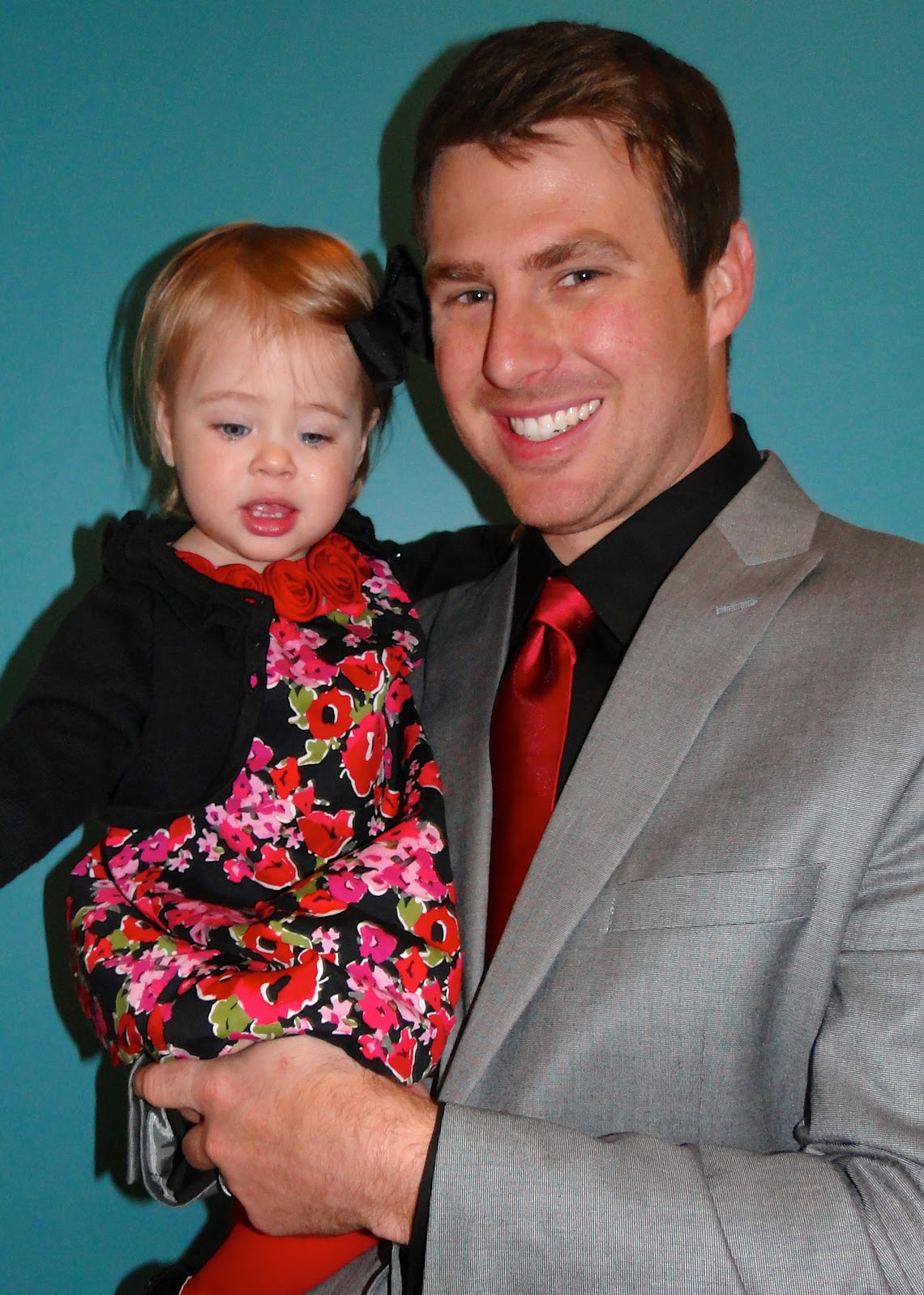 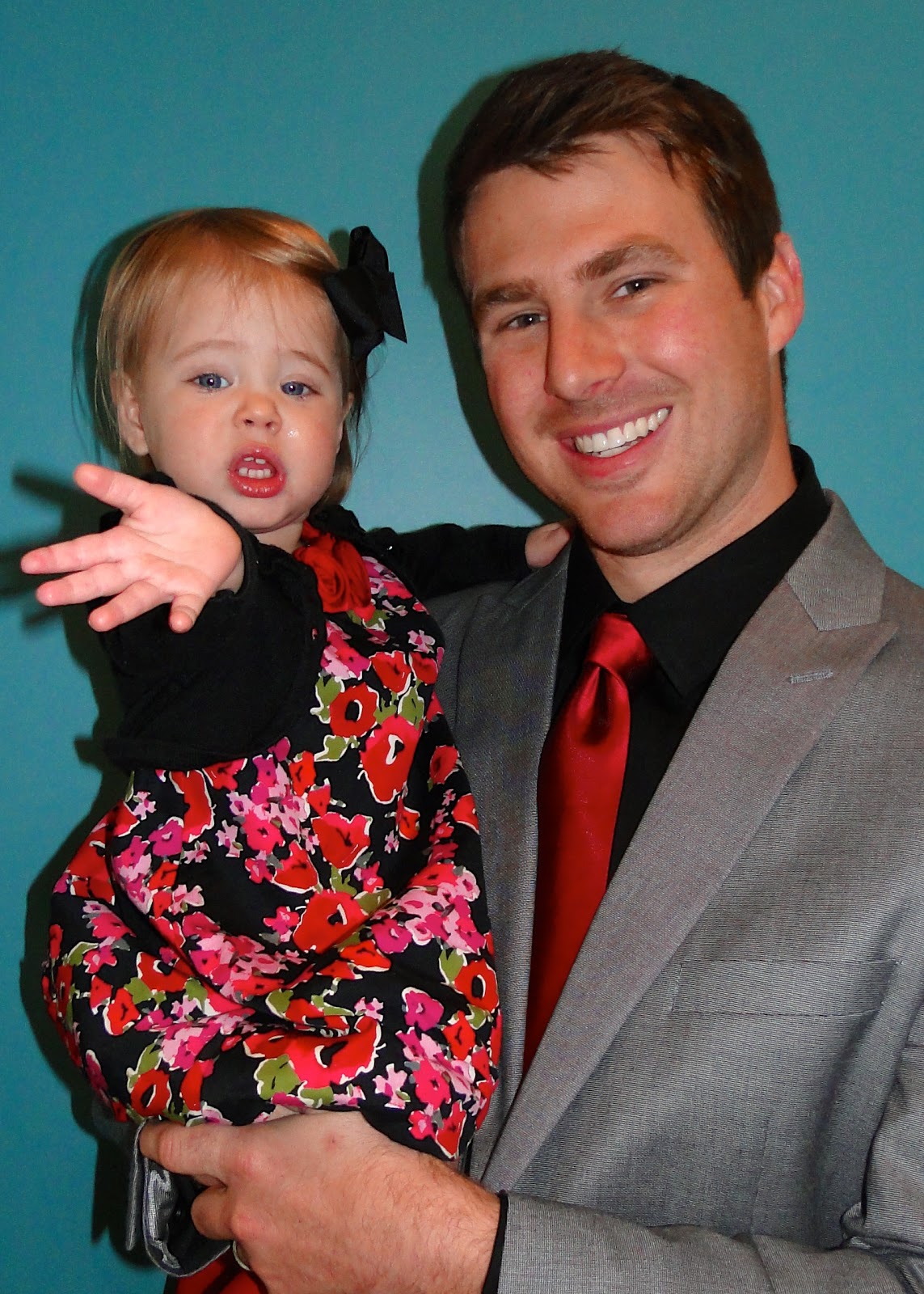 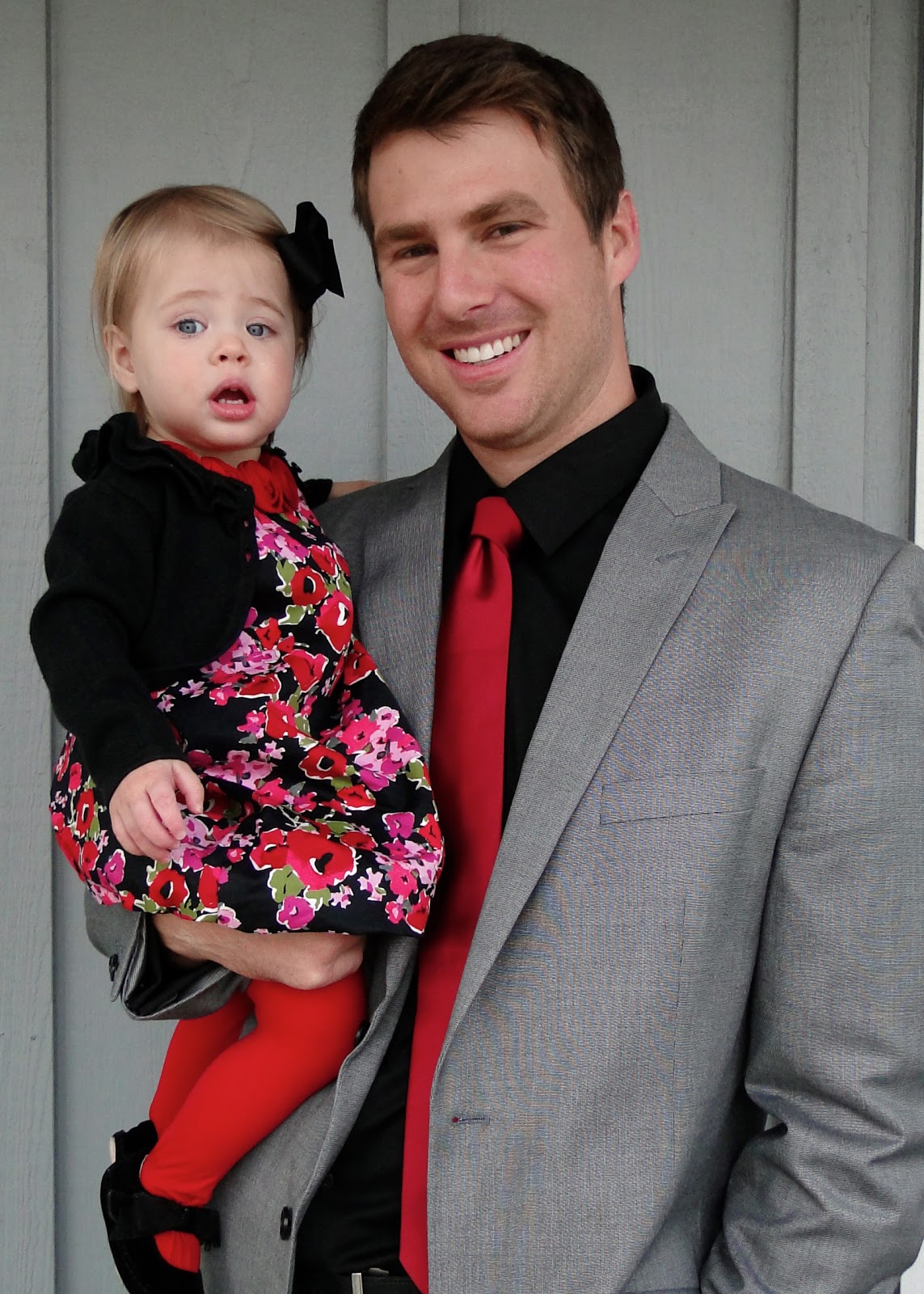 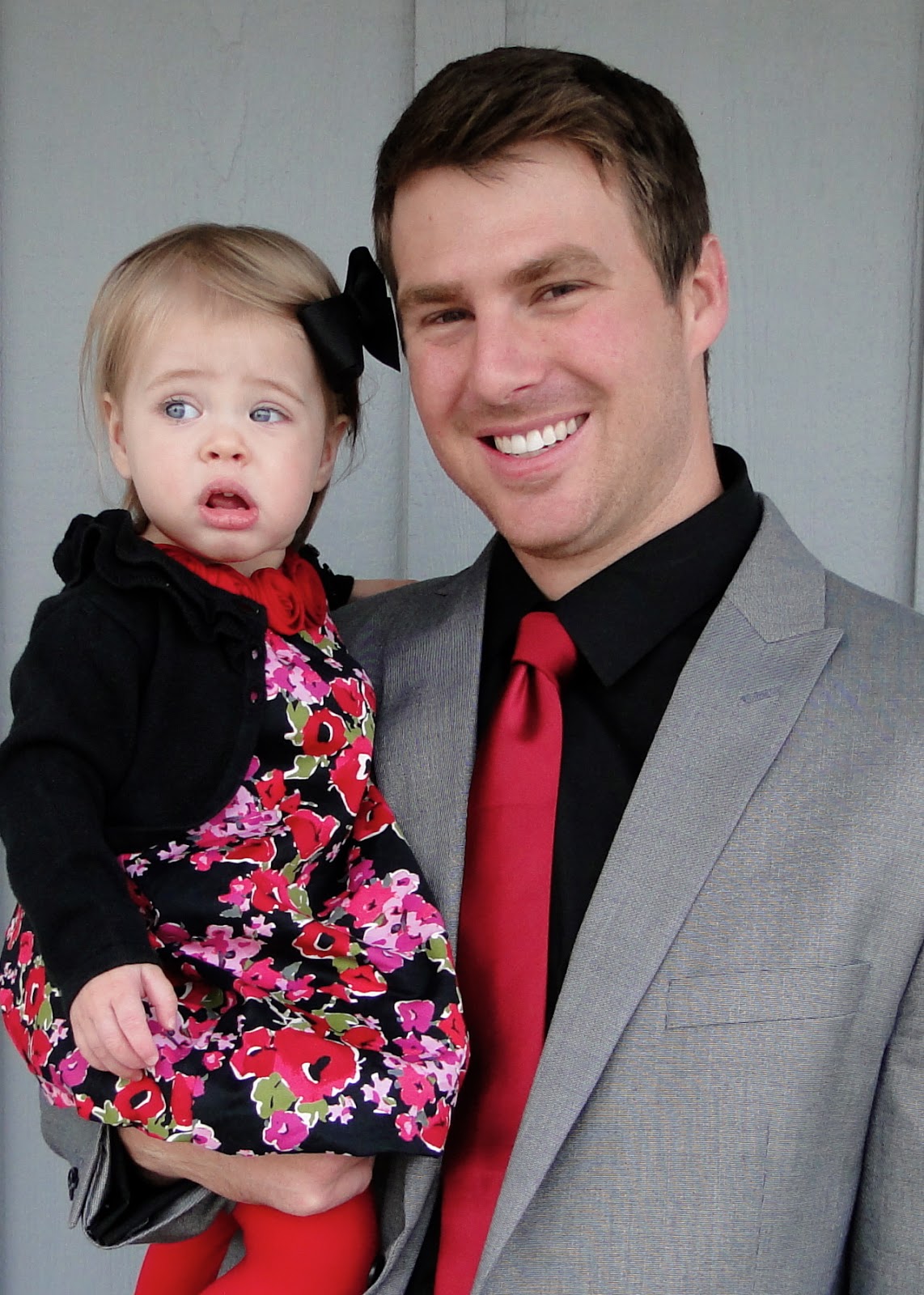 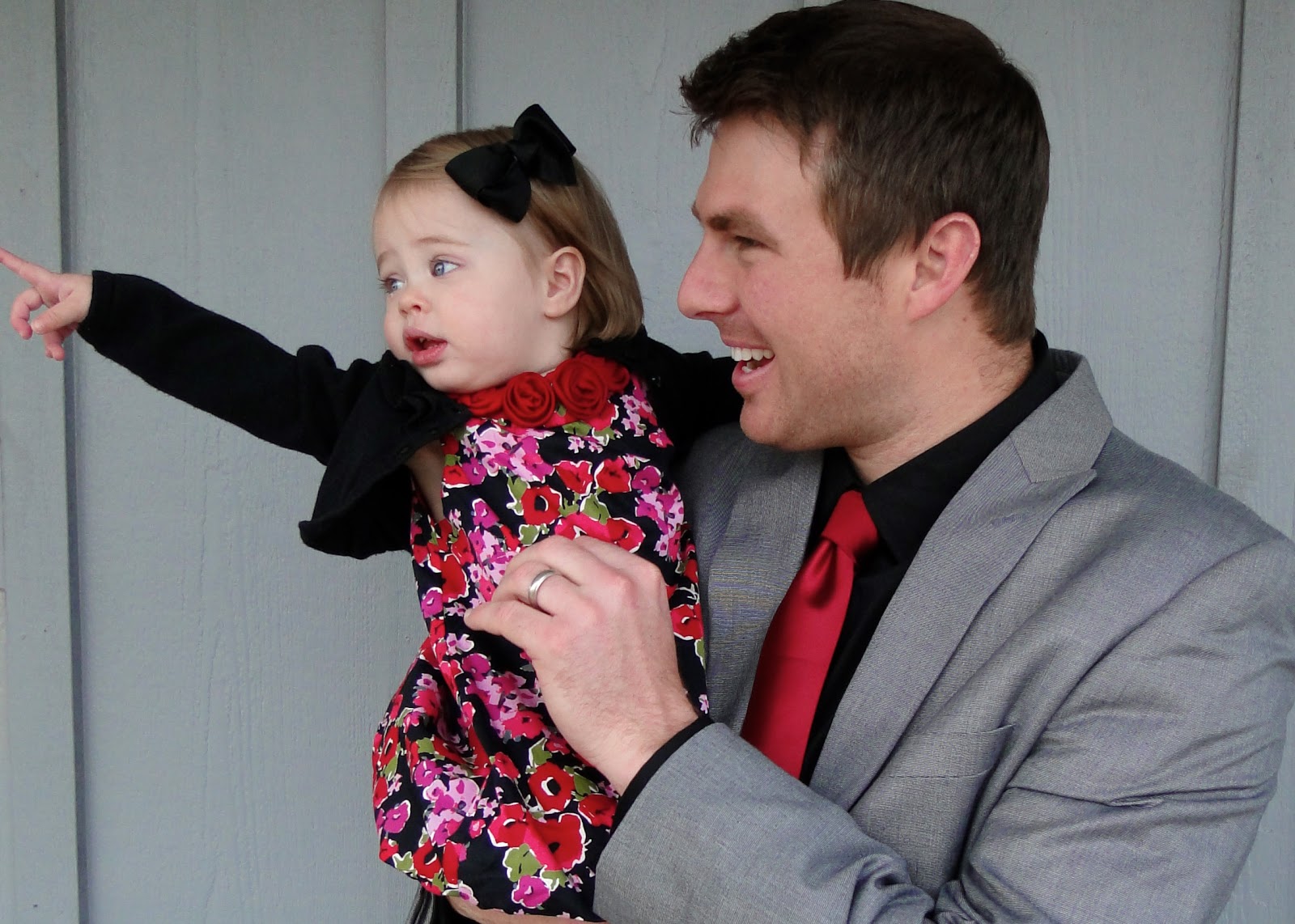 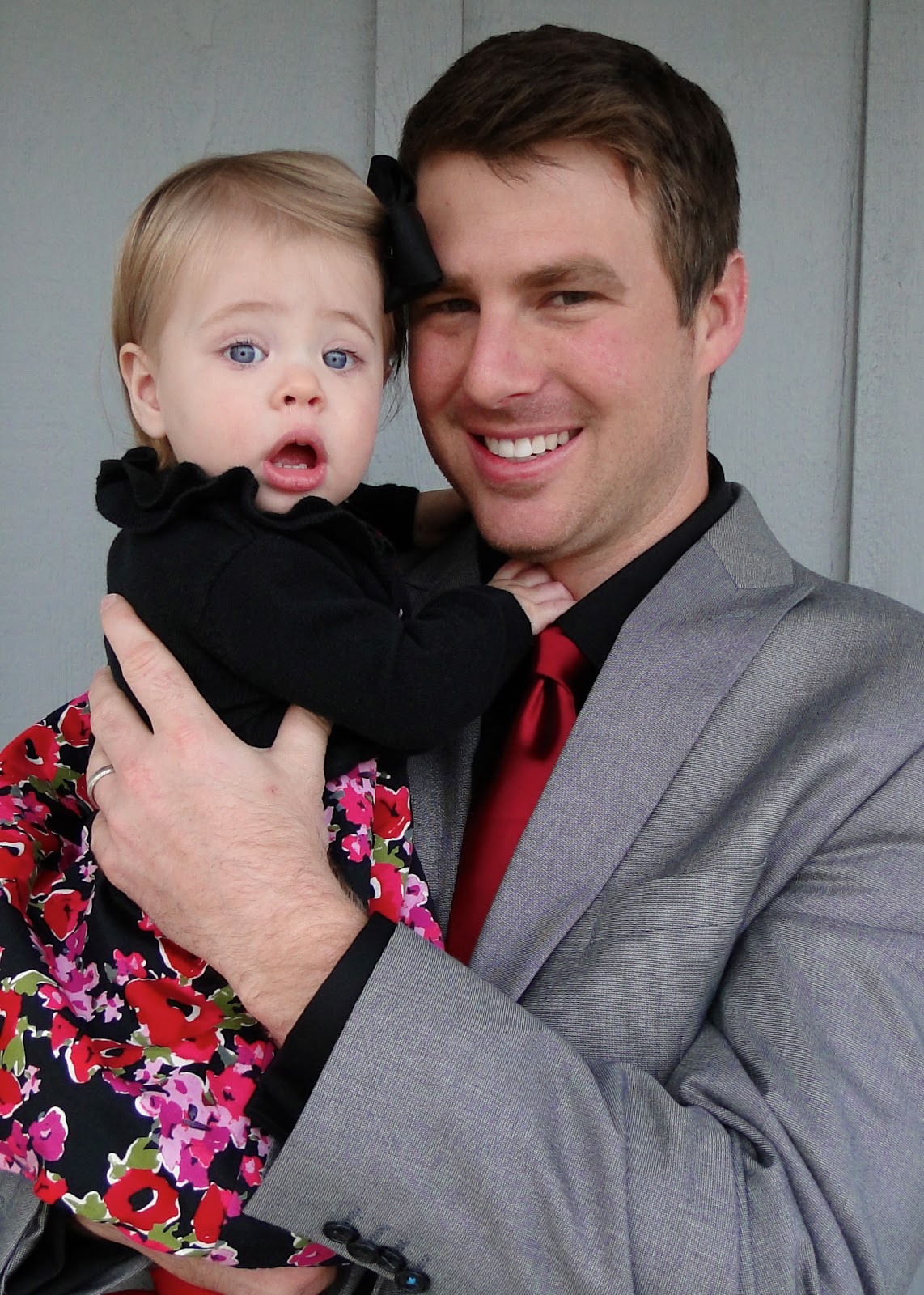 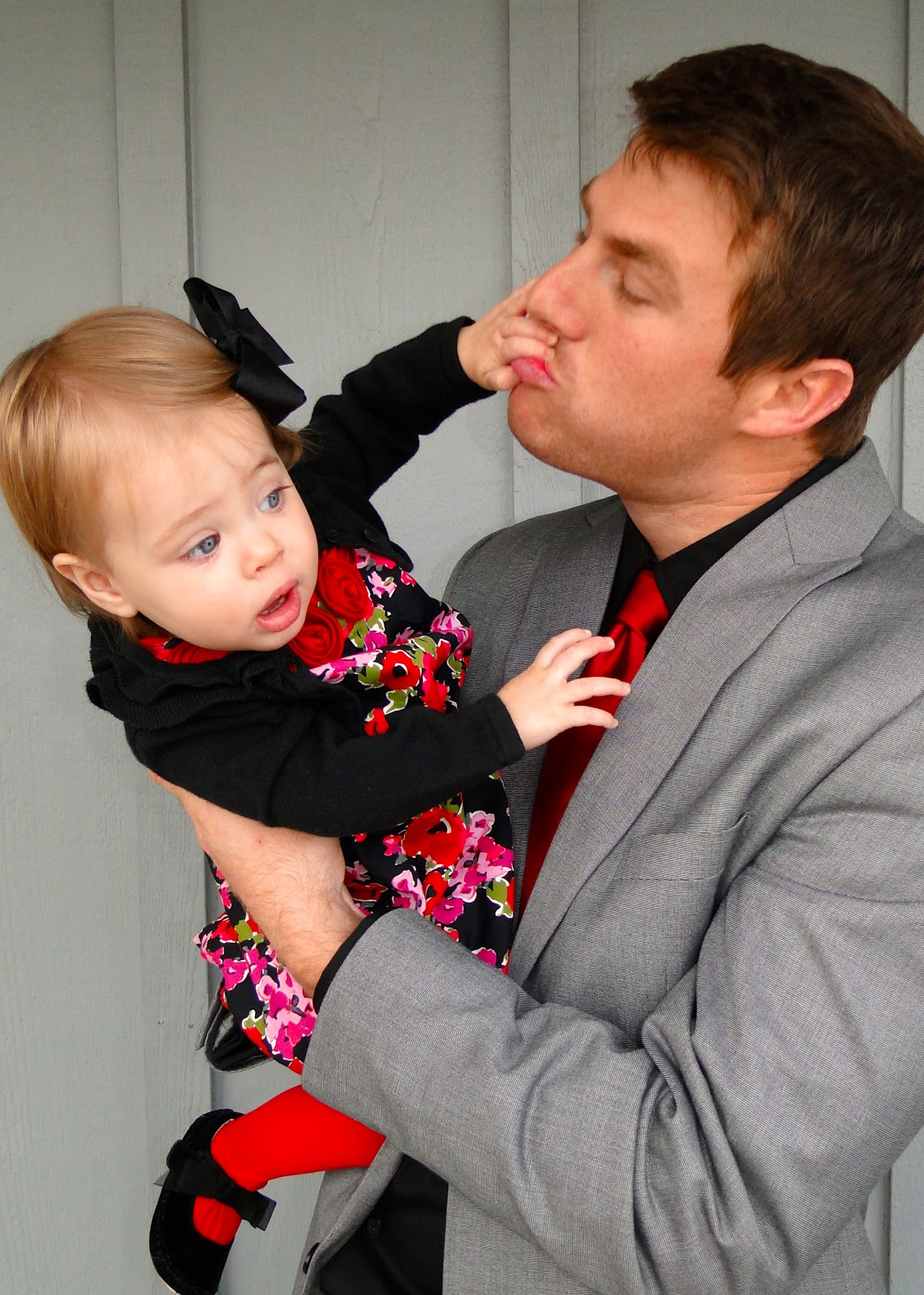 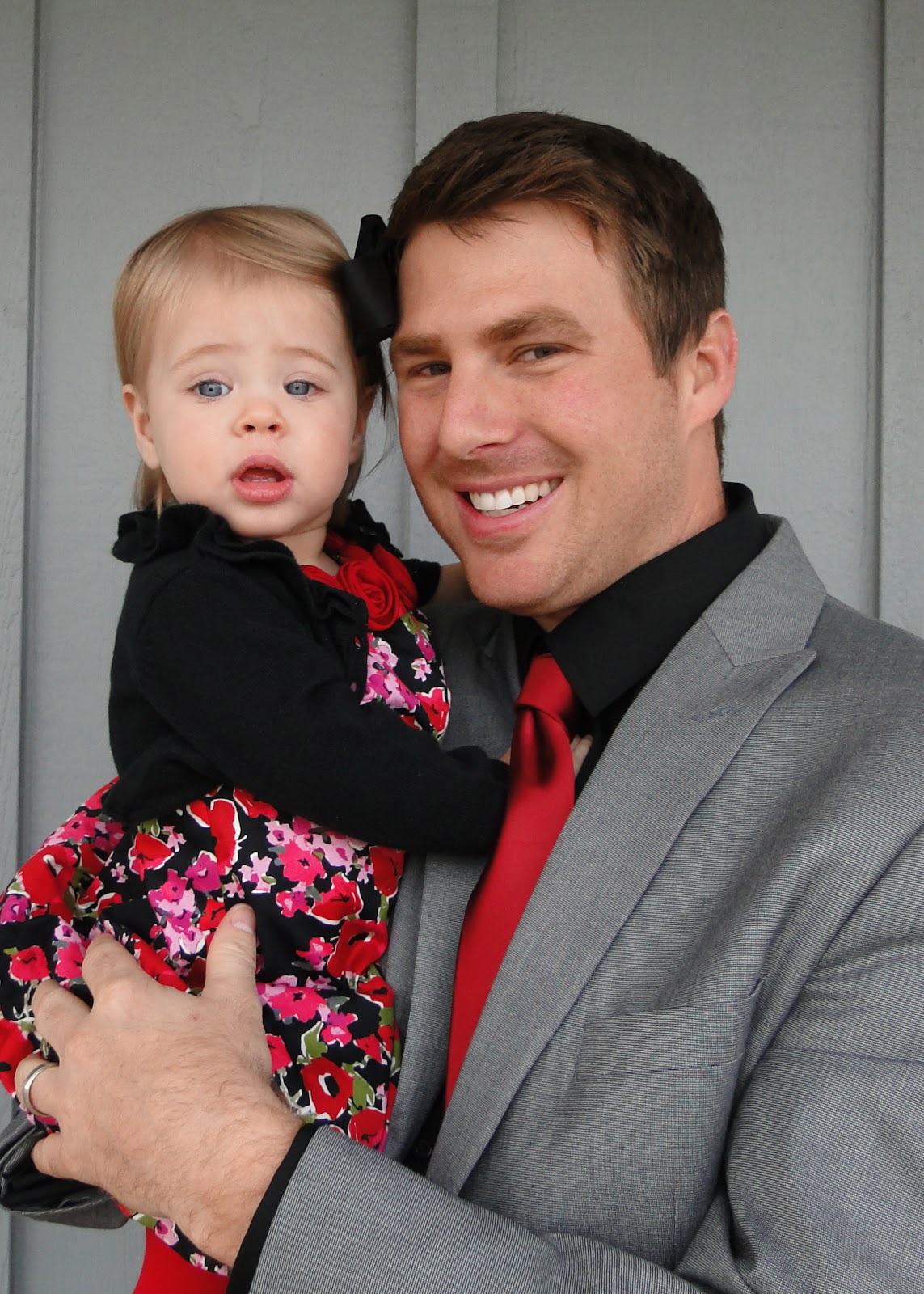 They had a good time at the dance. I mean they were only there for like 20 min but it was a great 20 min haha. Zach said that Britt was hardcore all about the goldfish snacks they had out (our kids just LOVE food) and that she did get into the music and dance some too. It was a lot for her and she got sleepy pretty quick and it was rather boring for Zach too. Which I don’t blame him, I’m sure it was! I’m still SO GLAD and THANKFUL he took her though. I don’t have many memories of stuff like that with my own dad growing up and I KNOW that Britt will love looking back at all the pictures through the years of that special night with her Daddy. Even though it’s over-priced, even though it might be kinda boring, it’s worth it for HER. And I’m thankful that I’m married to a man who gets that 🙂 He even took a few pics with his phone while at the dance which was so precious to me 🙂 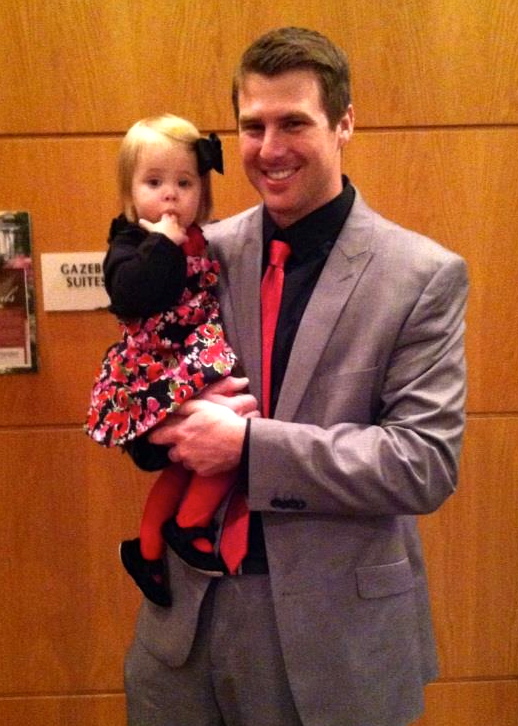 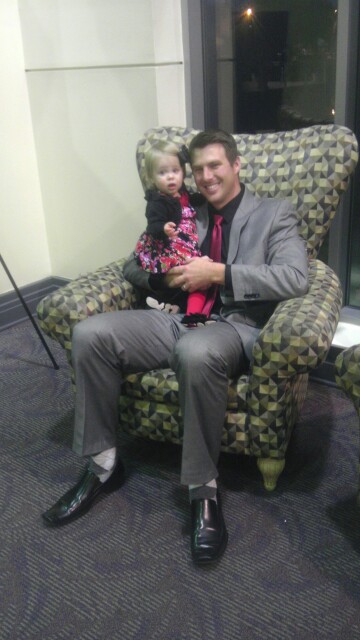 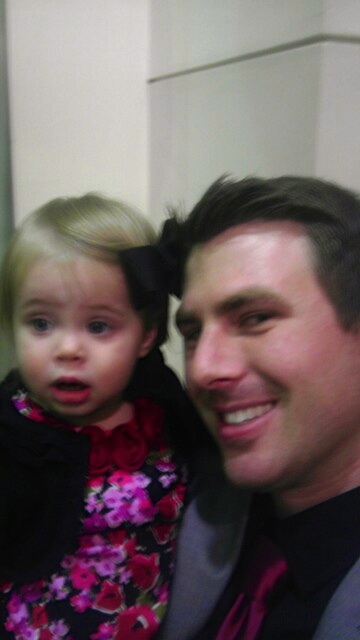 I loved how when I looked through the pics that both years I have some of Zach giving Britt kisses! Such a sweet Daddy!!! 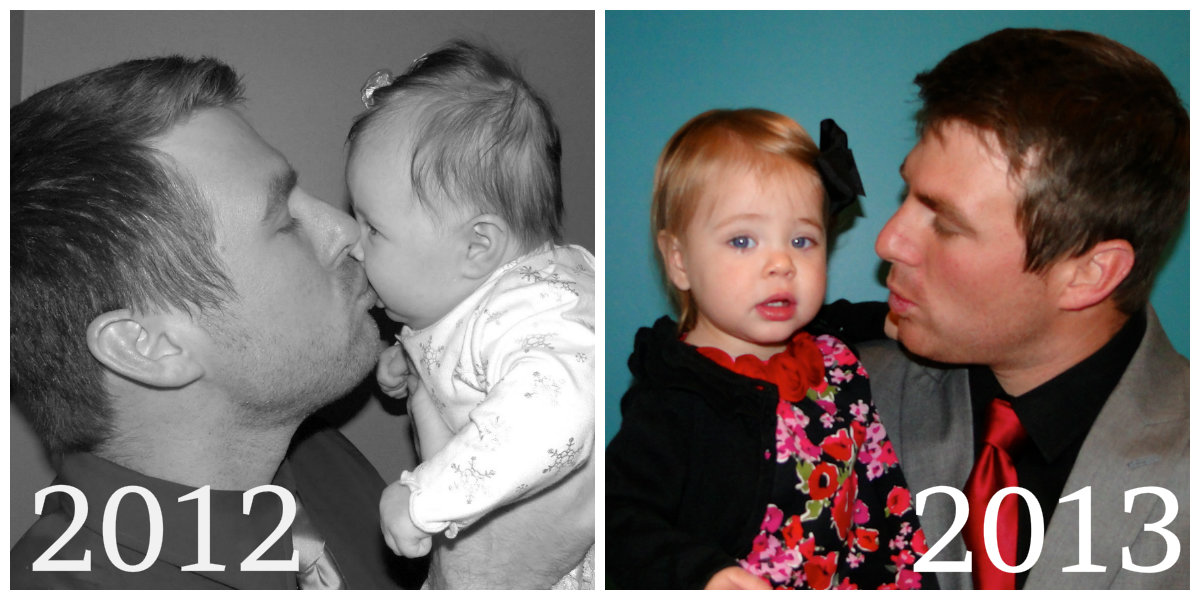 It’s def tough to come up with Father – Daughter ideas. Just like I often struggle with fun things for Kye and I to do together alone? It seems like there are so many easy ideas for Zach and Kye to enjoy since they are both guys and for Britt and I since we’re girls and just have more in common. What do YOU do with your opposite sex child??? I’d love some ideas!