Ok, so I’m an idiot. But I also think this whole age thing is confusing as crap! When we are born we are in our 1st year but then we turn 1 year old and when we are 1 year old we’re actually into our 2nd year! It works the same way with weeks. Kye’s first week he was actually 0, his second week he was 1 week old, etc. This whole time I’ve been doing it wrong. Since he turns 12 weeks old today this whole past week has actually been his 12th week, not his 11th! Confusing? Yes! But I’m going to go back and correct all the weeks that I’ve written about 🙂 Now, onto this past week…which is when Kye was 11 weeks old but was living his 12th week of life! haha

We’ve been battling it out with the naps and thought he may be ready to be done with the swaddle so I tried laying him down in a sleeper and when Zach checked on him he thought he was cold so he put a blanket on him. When I walked in and saw this it was too cute not to snap a picture but then we also had to have a little Mommy and Daddy talk about how babies, due to SIDS, are not supposed to have blankets on them. I looked it up and did you know that more babies die of SIDS between the ages of 6-12 months than 0-6 months? It says it’s because parents assume their child is old enough to be okay to sleep on the tummy, sleep with a blanket, or sleep with a cuddle animal…but they aren’t! Pretty scary stuff and I totally see why parents would think, even at 3 months, that the baby would be okay! Zach and I thought we were in the clear too! 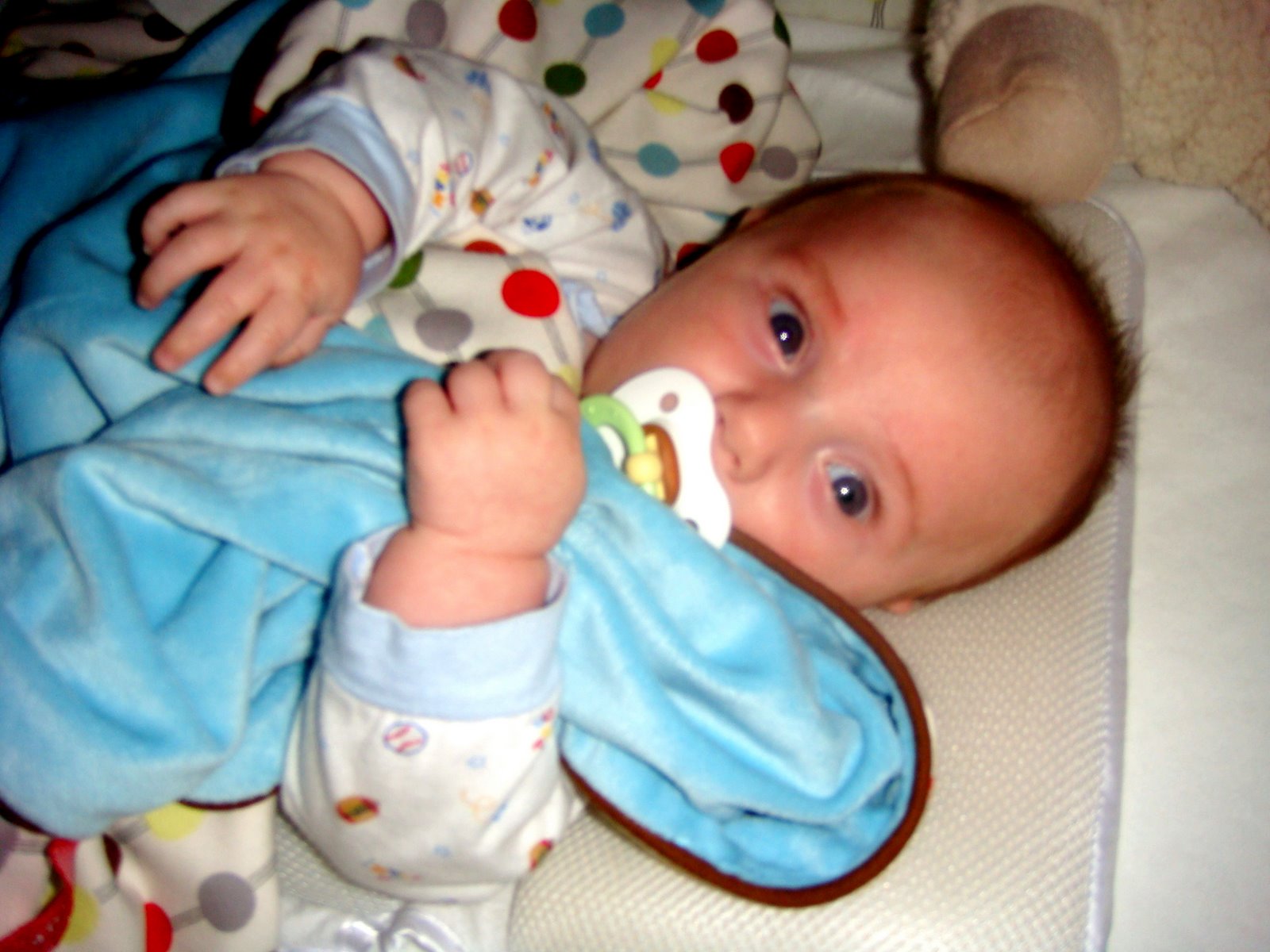 Like I said, we’ve experimented without the swaddle, and he still needs it. However, as seen in the Memorial Day post, he is breaking OUT of the swaddle a LOT! I have to go back in and reswaddle him all the time. He’ll get out one arm, both arms, one leg, both legs, or sometimes all four!

After the funeral this week we went over to Charlotte’s house for a couple hours to spend time with everyone. It totally messed with Kye’s schedule but sometimes that’s okay 🙂 (See I’m not that hardcore…right?) Anyway Kye is officially drinking 6 oz at each feeding! The bottles I’ve had this whole time were little and only went up to 5 oz so I ordered the Medela big bottles which go up to 8 oz. The nipples that came with them are still too fast of a flow so he’s using the nipples from the smaller bottles but is enjoying his big boy bottles! Mrs. Charlotte got to feed him his first one! 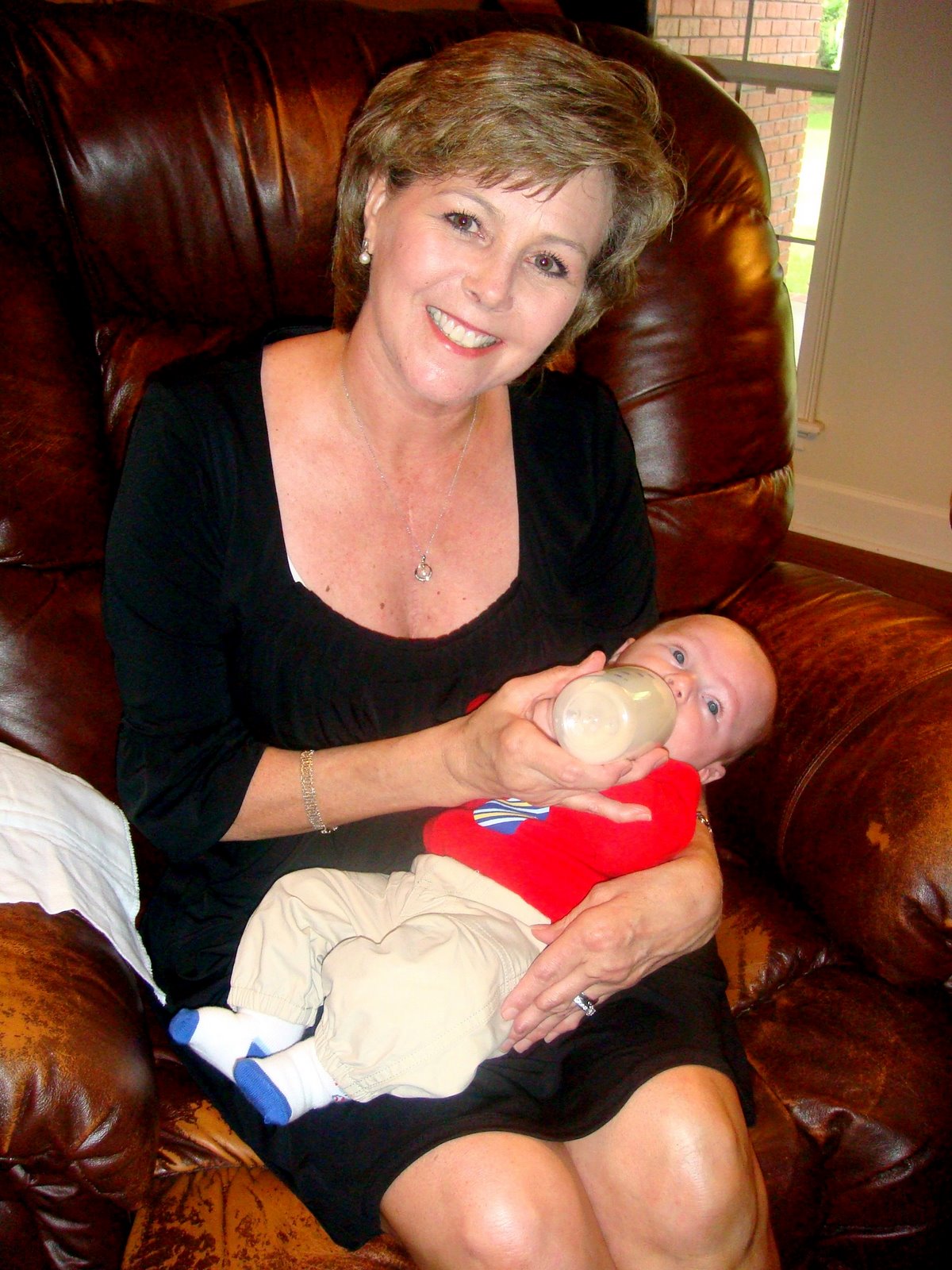 So we still aren’t seeing any rolling over! However, Kye has been enjoying standing up a lot. He will push his legs down and so we will hold him up and let his feet touch the ground. While he still doesn’t take baby steps like he “should” be doing, I’m glad he’s wanting to stand up more!

Here I am giving him his nightly baby massage! I don’t really know the benefits of it but he loves it and I think it helps keep his skin soft 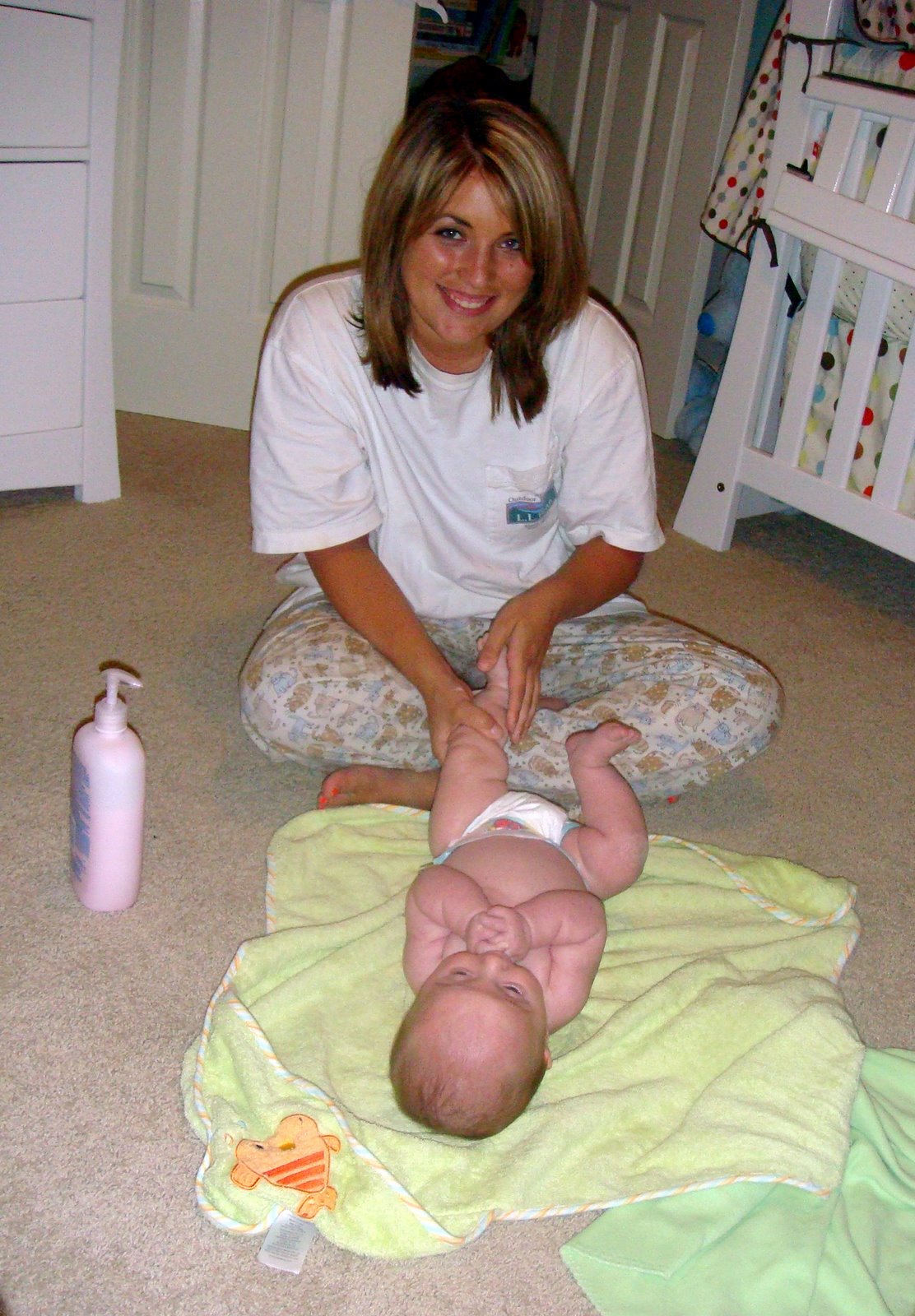 While at Mom’s over the weekend we noticed near his ears he has a dry patch of skin on both sides. It’s a little red and even peals! When we got home I noticed his ear felt dry too! Of course, I worried about eczema as no mother wants her child to suffer through that! But I’ve started putting baby lotion on it several times a day and it seems to be clearing up!

Kye has become more and more chatty. He talks constantly…at me, at the lights (especially the lights!), at the monkey on the changing table…whatever he’ll talk to it. I think he has it coming at him pretty honest though seeing as both his mom and dad are very social, talkative, people! Here’s a little taste of a conversation with Kye: 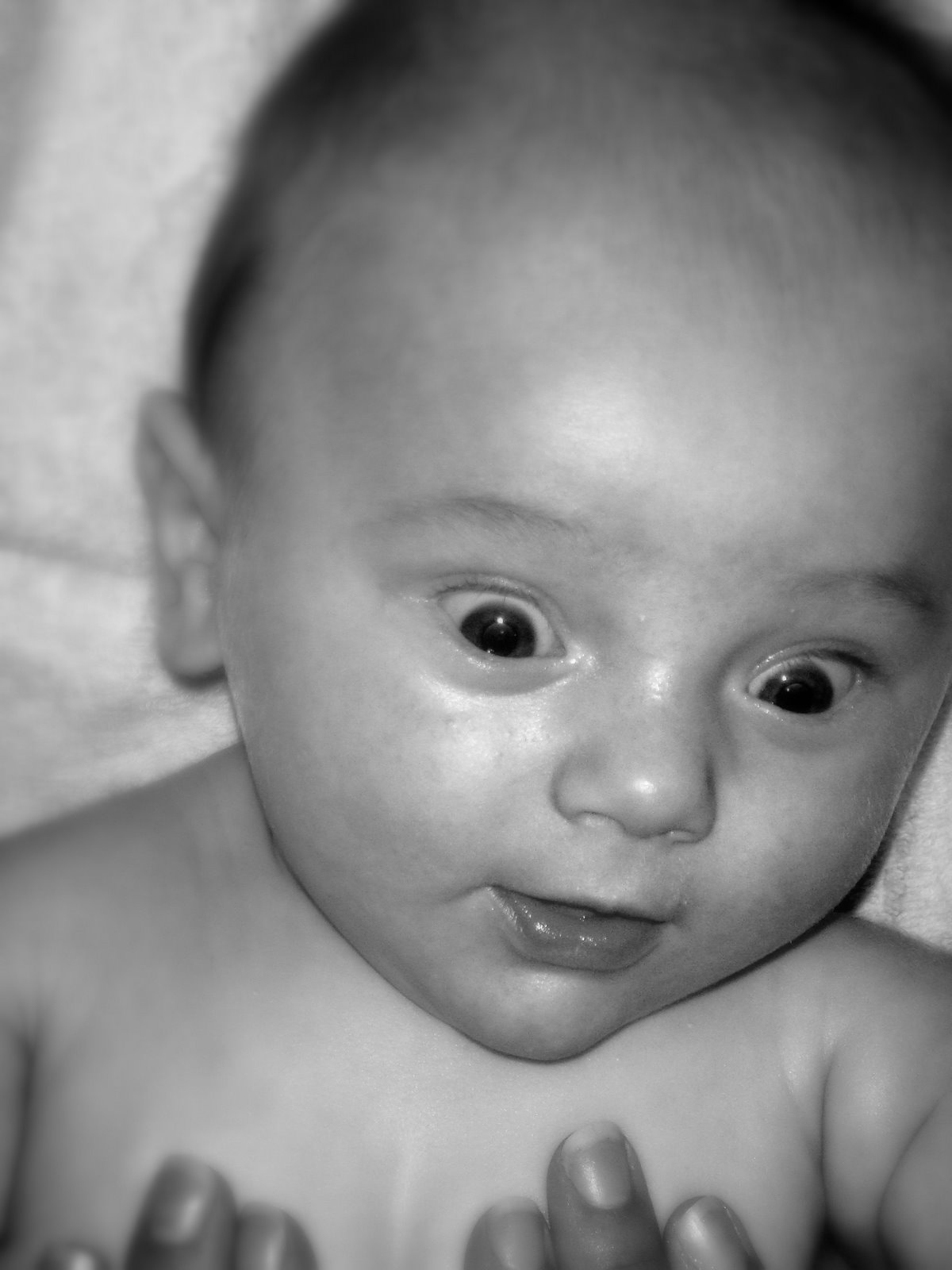 We really don’t feel like Kye was properly diagnosed when the dr. said he had GERD. He spits up a lot but he’s totally fine with it and I just have that motherly gut feeling that says he really doesn’t need the Zantac. Last Wednesday we dropped the nightly dose and he’s done fine without it! Tomorrow we will drop the morning dose and see how it does without it in his system at all! Hopefully we’ll be able to be med free! 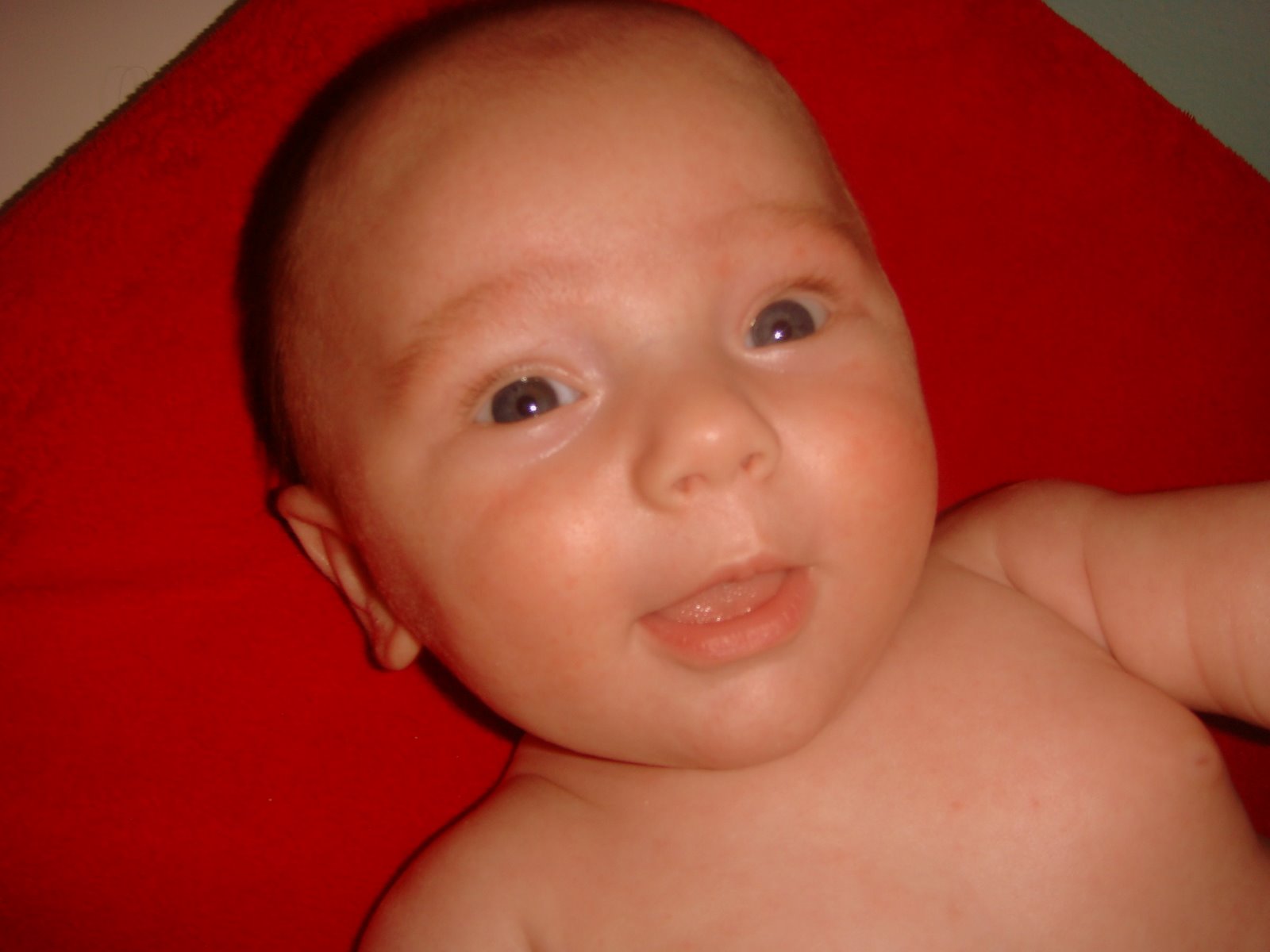 As Kye gets bigger and bigger things change! The biggest thing to change so far for me has been his nursing position. Since Day One I’ve liked the football hold, as I found it the easiest. It’s where the baby is laying in one arm like a football with the legs at my side and head beside my breast. Well he’s too big now for it! His little feet get all smushed up against the chair and it’s uncomfortable for him so now we do the cross-cradle hold which is where his feet are across my body with his head in front of the breast. It’s much easier for me and much more comfortable for him.

Also we realized that he’s too heavy for the bassinet part of the pack and play! The weight is up to 15 lb but with a full belly and potentially wet diaper he’s for sure that heavy! So now he uses the bottom part which is waaaay more of a pain because I have to bend over so low!

Kye is still loving to reach for everything, and now he can finally reach his car seat toy! Usually Zach and I have to reach back to the backseat and hit the frogs eyes for him to get the music going if he fusses but now he can do it himself! It was great that when we had to get back on the road from St Augustine that we stuck him in the car seat earlier than his naptime and he just entertained himself until he fell asleep! 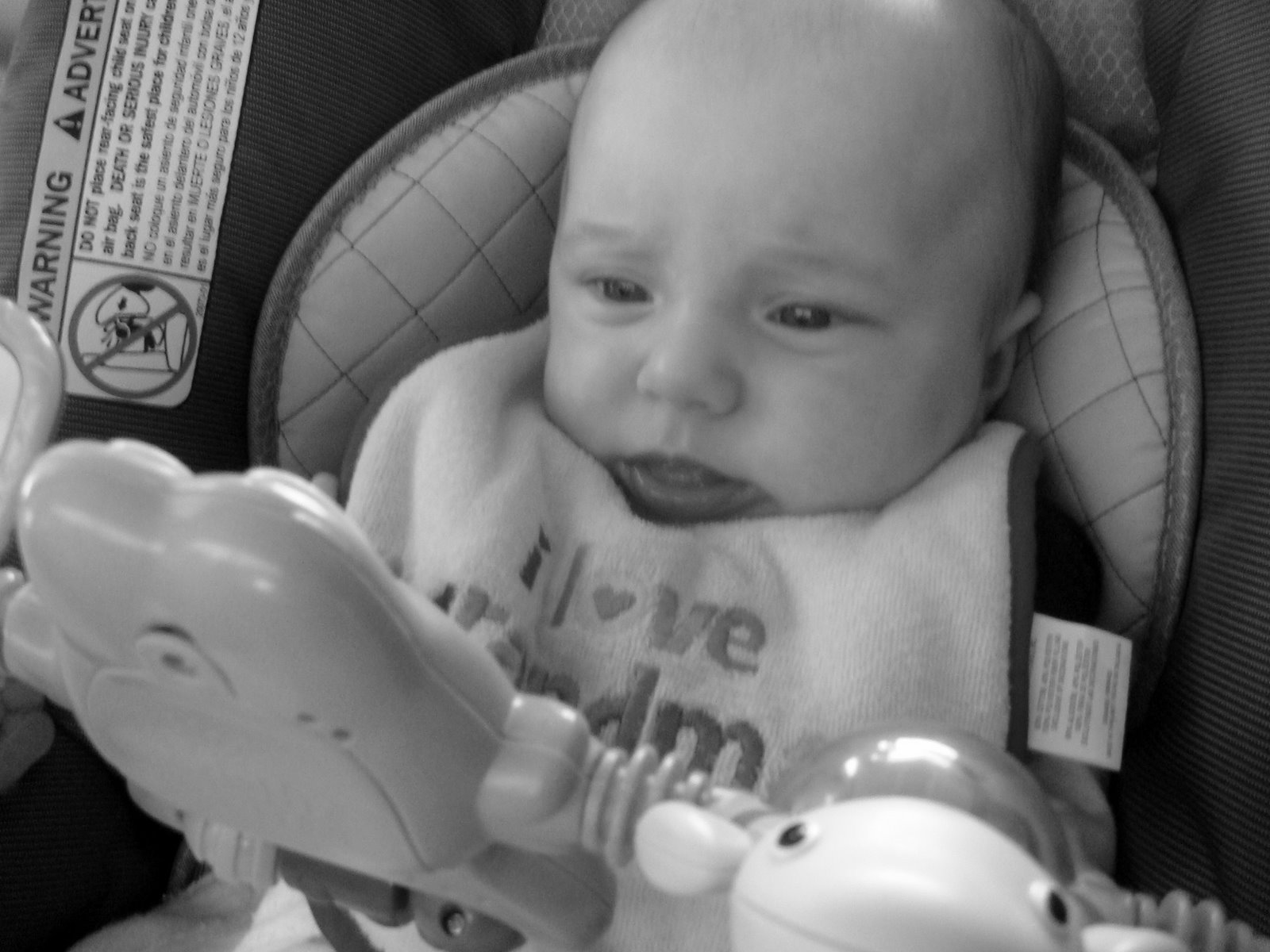 Playing with the frog! 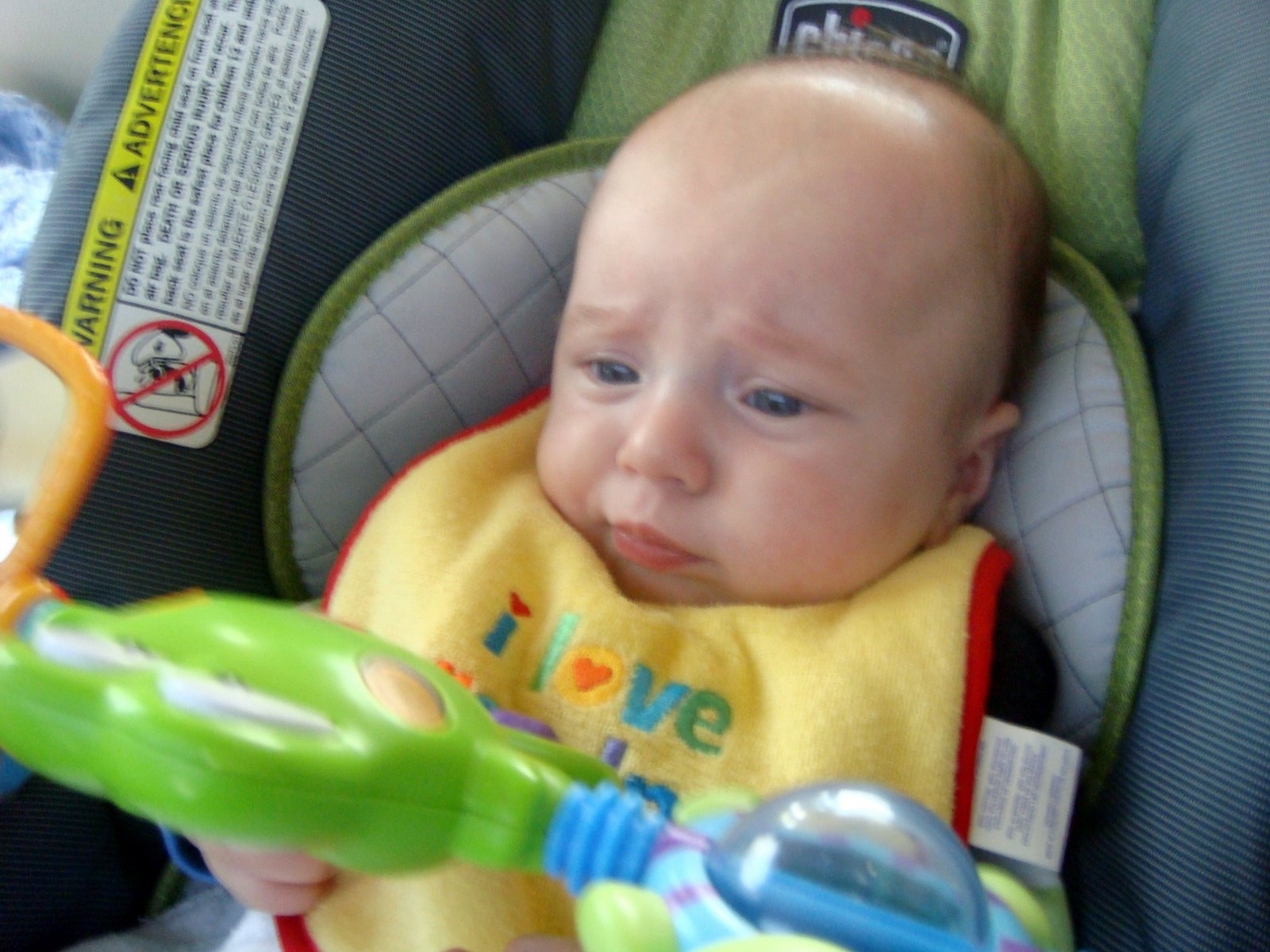 When we put the Monkey Sticker up above the changing table I thought it’d be a good thing for Clover to look at while he or she got diaper changes…and I was right! Kye ADORES the monkey! Sometimes if he’s fussy we’ll just go over to the monkey and he cheers right up. I took a little video of how much fun he has looking and talking to Mr. Monkey (notice we say Mr. for everything…I don’t really know why?) 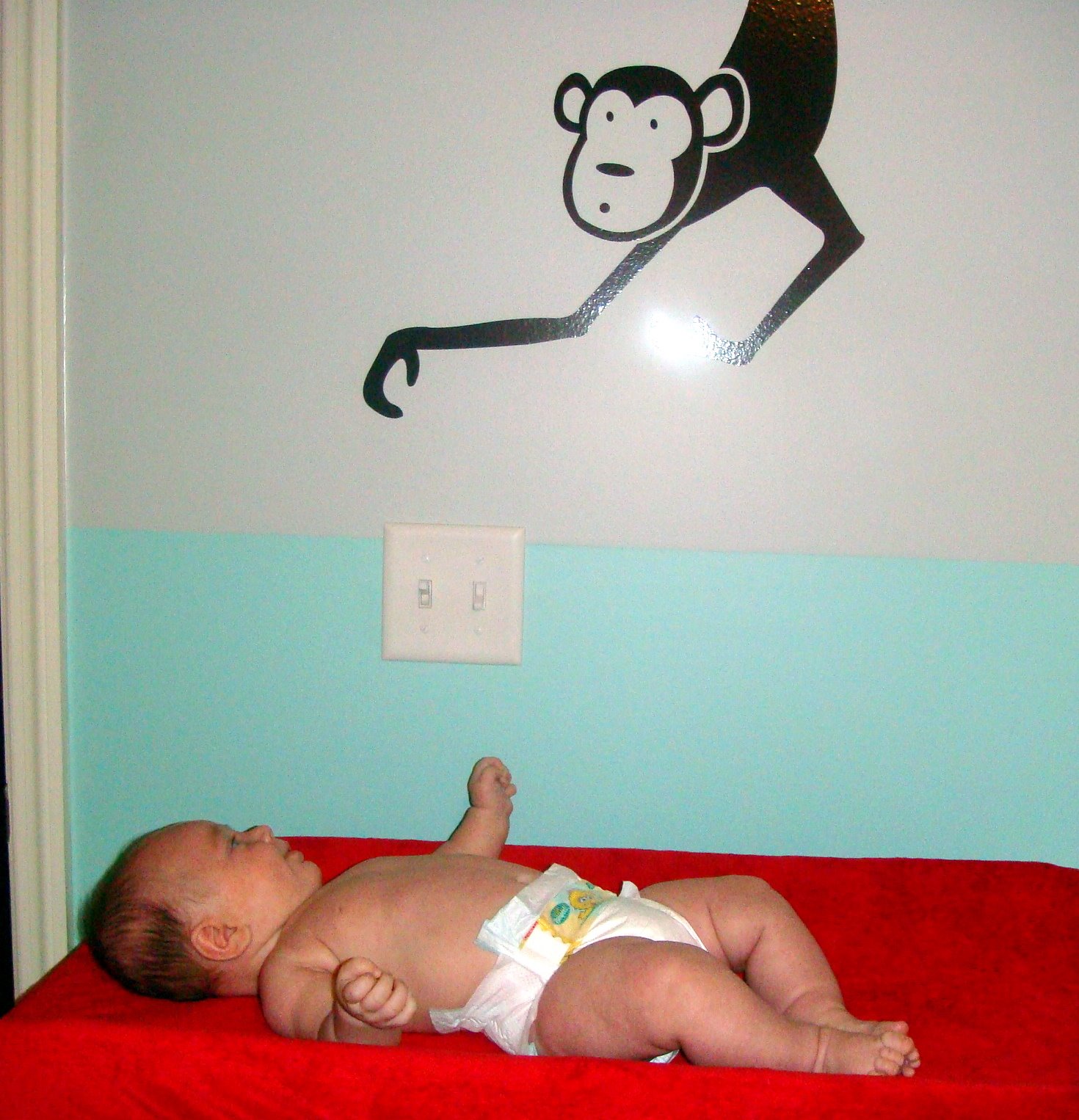 I think all babies do this at some point but Kye now understands what’s going on when it’s time for a diaper change. He’s much more helpful and puts his legs up in the air for us! 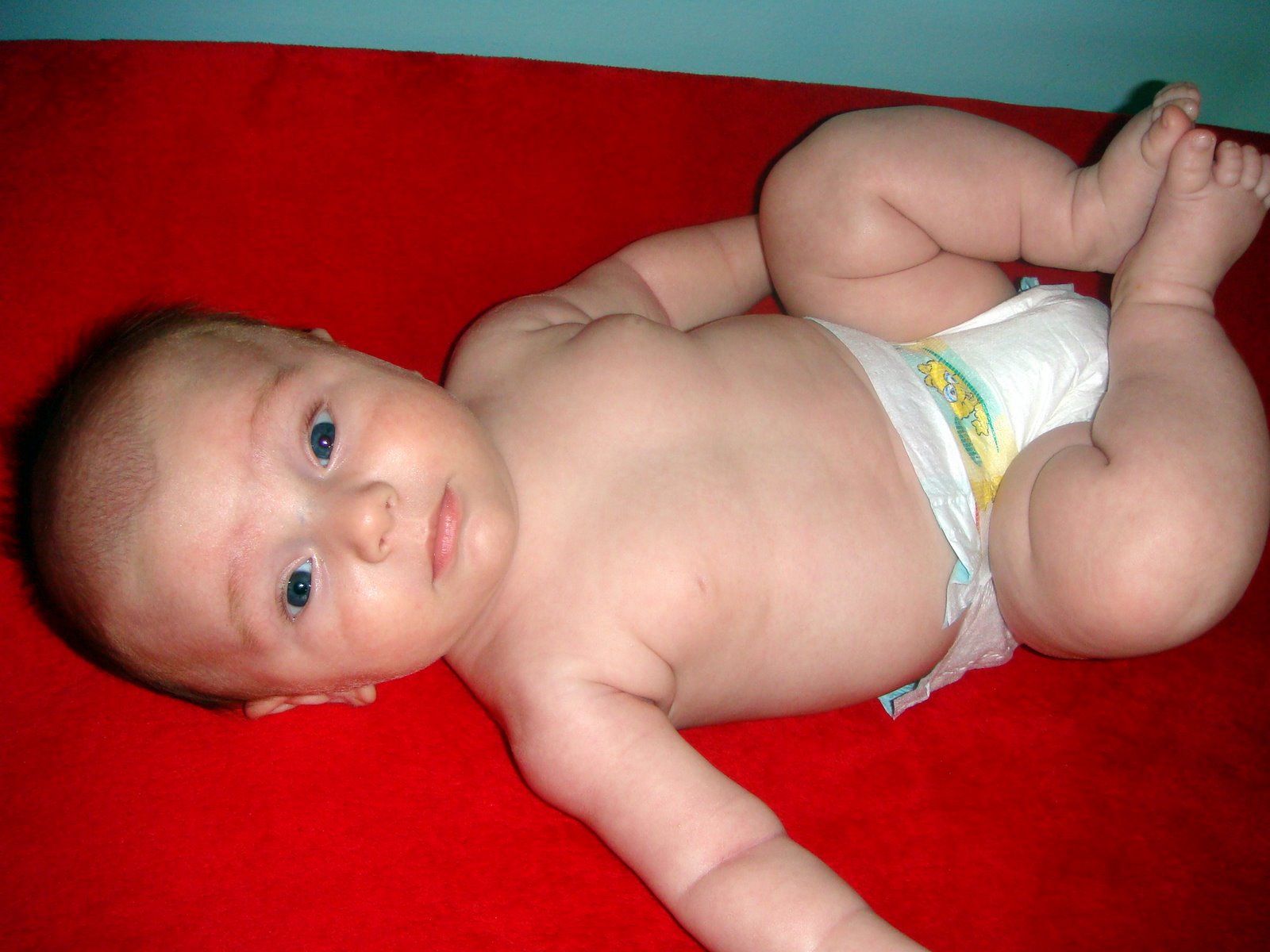 Kye has begun the typical I-put-everything-in-my-mouth thing. Of course right now the only things he really has access to are blankets, burp rags, and bibs but they all go right for the mouth! It’s pretty cute actually even if it means slobber on his stuff!

When I cry I bawl. Zach always teases me that I cry like Ron Burgundy from Anchorman when Baxter (his dog) got killed. I know I cry really, really hard. But I also turn so red! The whole side of my face turns red and stays that way long after I’m done crying. I’ve noticed that Kye cries similar to the way I do as when he really cries he will take AWHILE to get over it. He’ll be happy again but still doing the whole little bit of crying thing to get it over with. I’ve also noticed that he gets patchy red when he cries and that it stays there for awhile too. Notice his eyebrows!!! They turn BRIGHT red when he’s crying!!! 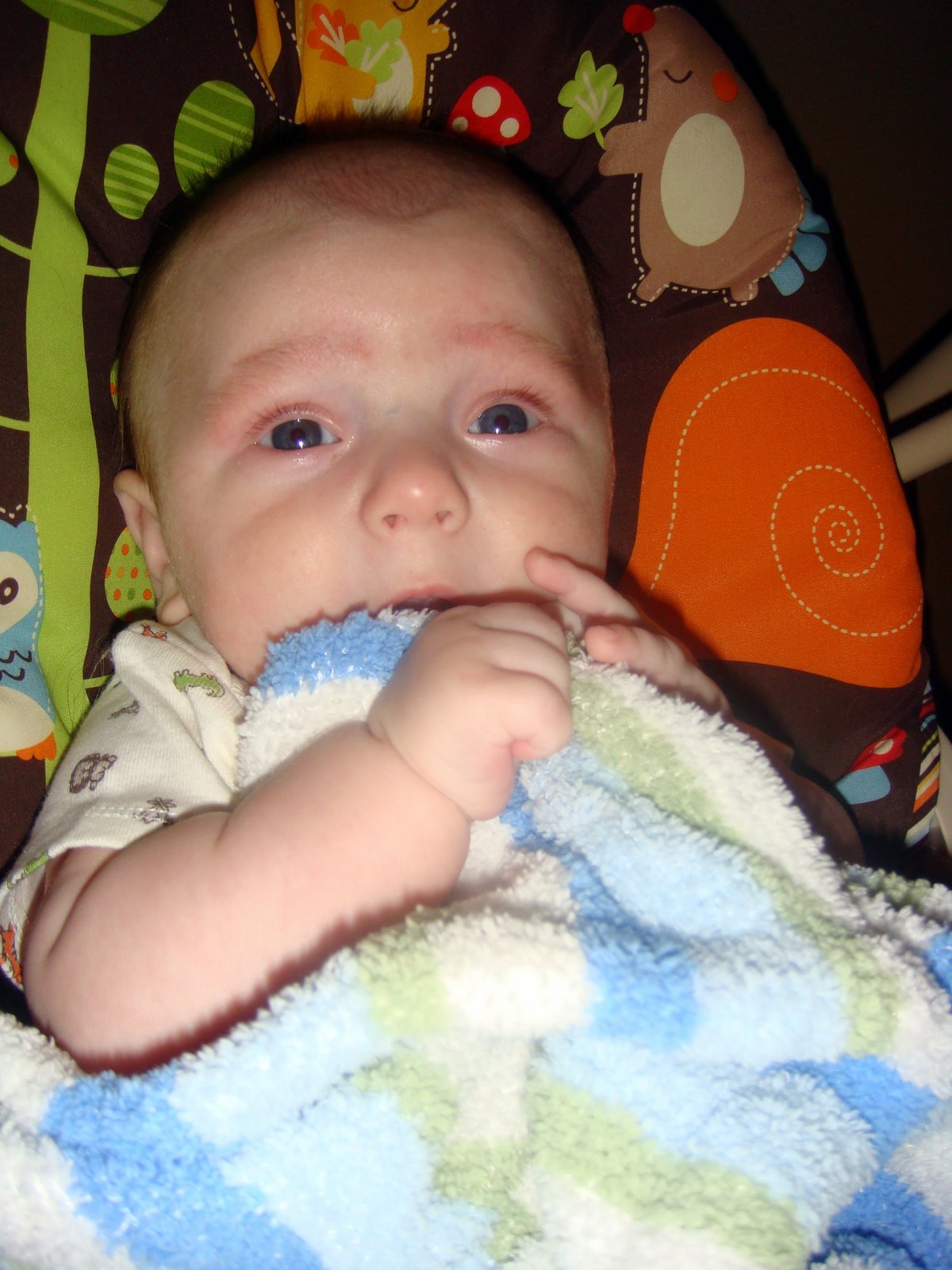 Before it was rare when Kye would reach for something with an open hand but this week it’s really changed. Now his hands are always open! I’ve heard it’s a myth that you can “train” them to be right-handed but I’m still trying to focus on that hand with things just in case. He’s really gotten down grabbing things and has mastered holding on to the hanging rattle on his playmat! 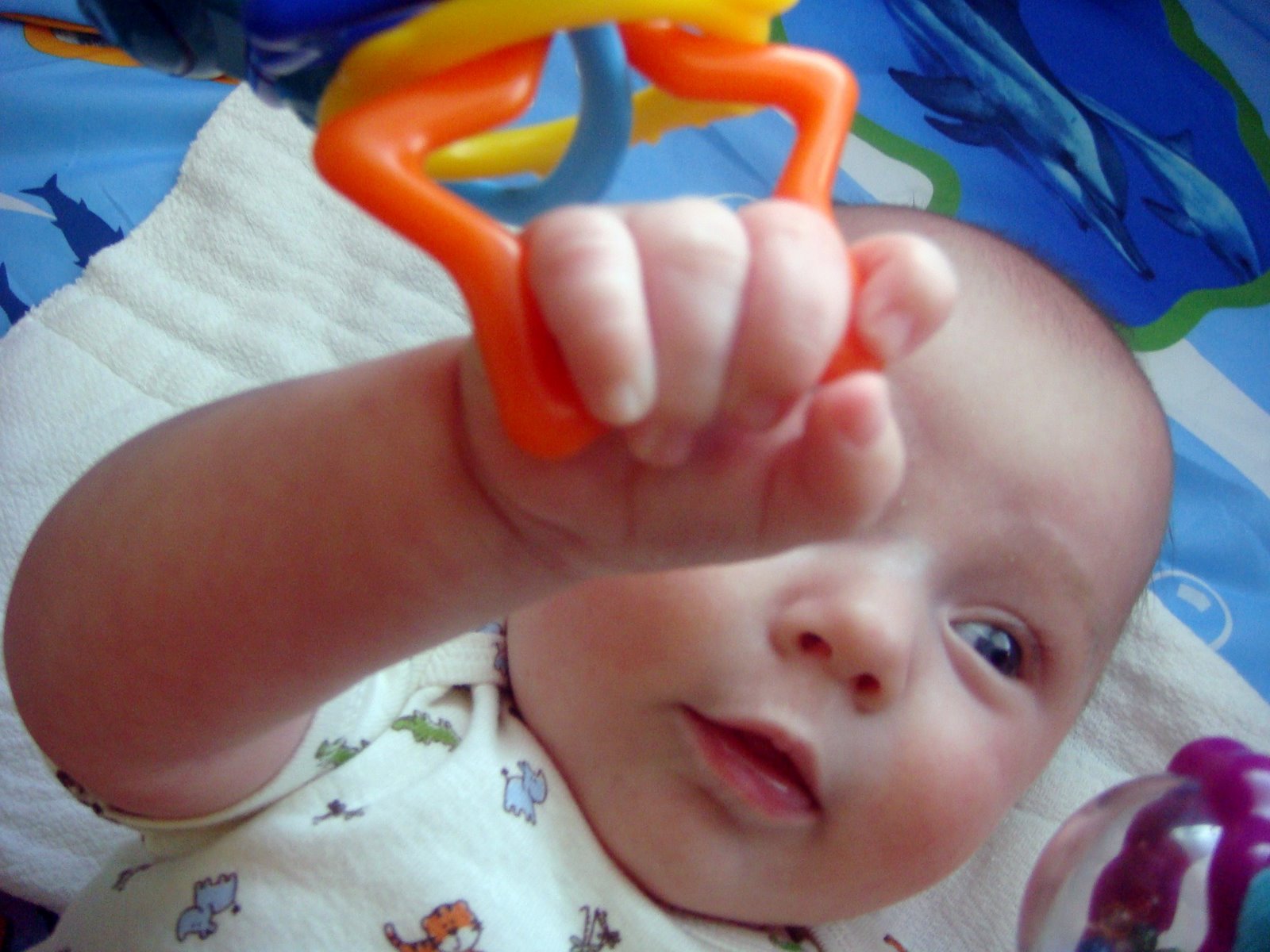 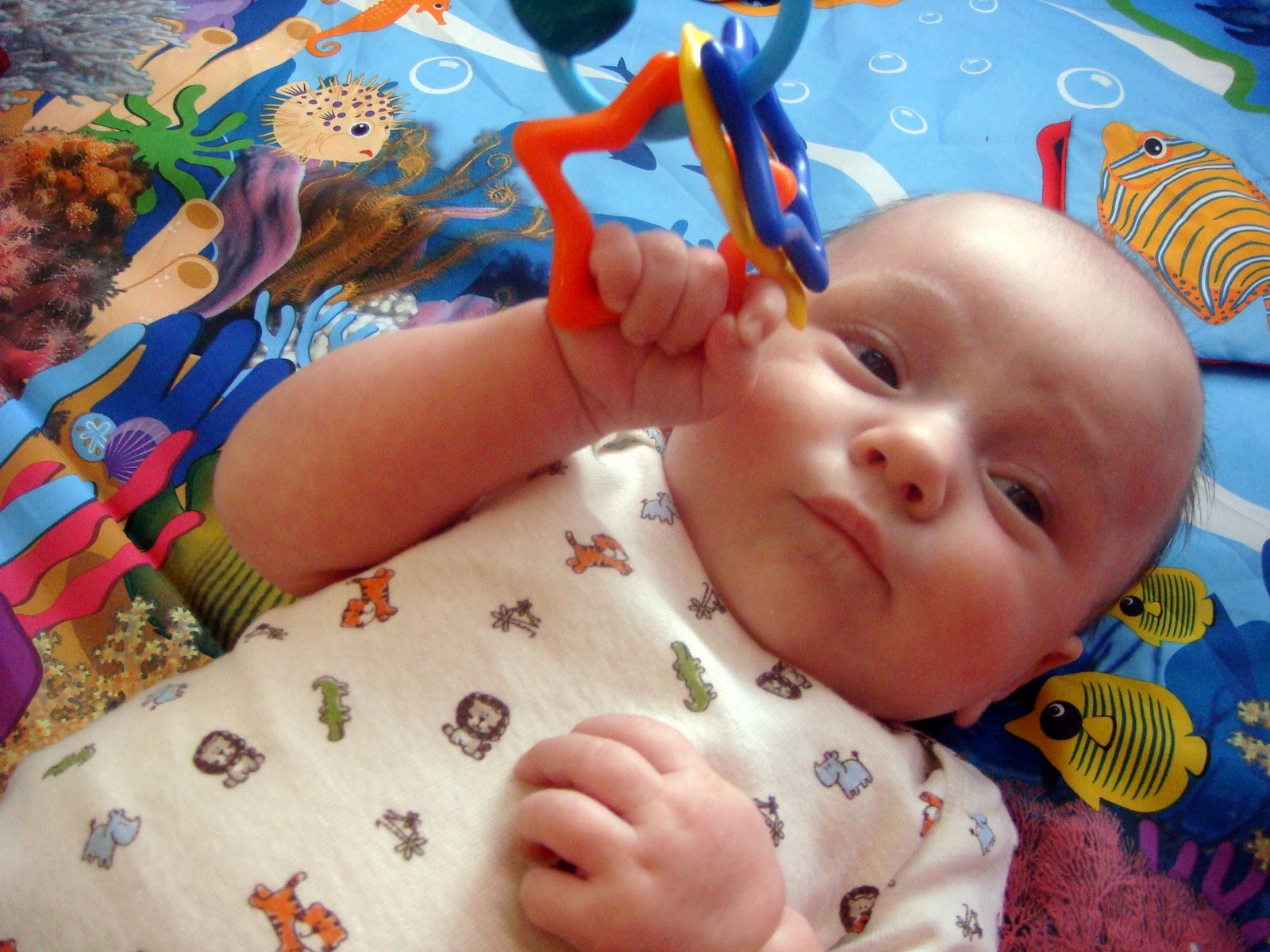 Kye is really enjoying finding his hands and exploring putting them in his mouth. His favorite thing is that left hand. He loves to play with it and to suck on it. He hasn’t mastered it enough for us to get rid of the pacifier but I can tell he’s starting to make connections and realizing it’s HIS hand that he’s sucking and that HE has control over it!

While, to date, Kye has never been sick…he does sneeze all the time! I was trying to capture him talking in this video but he started one of his sneezing fits and so I thought that’d be worth remembering too! I wonder if he’ll always have multiple sneezes each time for his whole life?

Feeling sooooo much better this week! I just weighed in this morning for my weekly Weight Watchers Weigh-In and I lost 2 1/2 more pounds! That’s a total of 10 1/2 pounds since April 29th! So less than a month!!!

While I don’t look 100% back to myself, I’m starting to see Emily again which makes me excited! Sure most of my pants still don’t fit but at least the clothes that do fit look better.

I’m down to only having 4.5 lb to be back to my pre-pregnancy weight and only 9.5 lb to be to my goal weight!

Weight Watchers did take down the points I’m allowed each day to eat. Since I’ve lost so much weight they dropped one point a day from my allowance. It’ll probably be a little adjustment but nothing major! I’m just so glad that I found something that WORKS!!!!

Zach is loving WW too and is seeing great results! We’re gonna be a mega hott couple in no time haha We both love it so much that we plan to stick with it forever. Why not? It’s super easy to follow and once we reach our goal weights they help you maintain it. It’s great for busy people like us and will be so easy to help teach our children proper nutrition and portion control!