I hate that we are so off on Kye’s appointments! This Wednesday Kye had his 4 month check-up, even though he’s more like 4 1/2 months. His 6 month check-up he’ll be a week shy of 7 months! They assured me that we will get back on track at his 9 month check-up though which is good!

I try hard to handle things that come up with Kye on my own by using the internet, friends, or books. I’m not one of those “omg call the dr.” type people. That being said, when I AM going to go to the dr. I come up with several questions to ask because I want to make sure I’m doing things as they would have me do them!

Why do we bother dressing Kye up all cute for the visits? He always ends up being naked anyway! Here he is with Daddy waiting for Stephanie to come in! This time the appointment fell at the end of his nap and during his feeding time so we had to feed him a bottle while we were waiting. It worked out well though because he was in a great mood for the doctor! 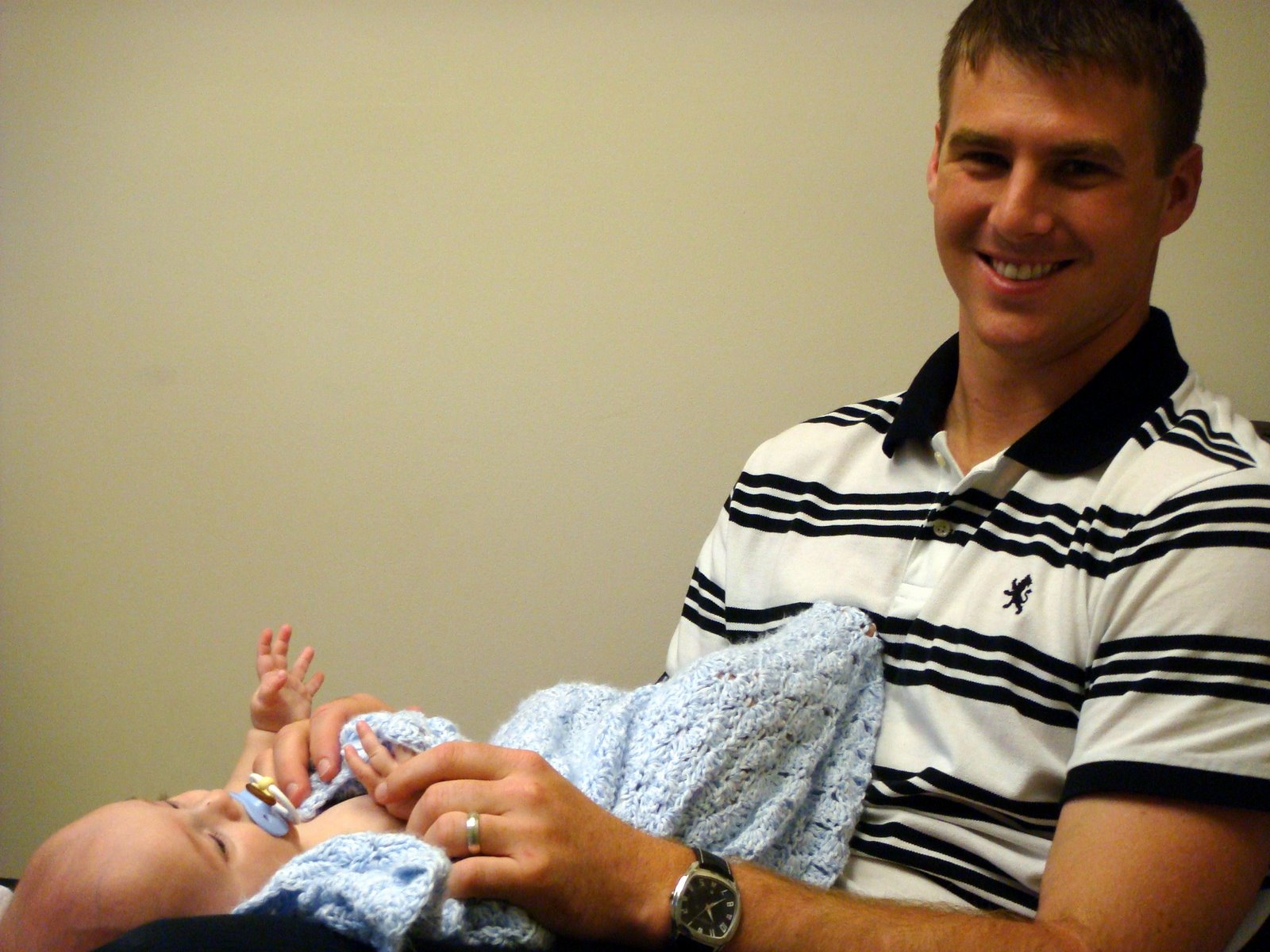 When we first got there they stripped him down and did his measurements. I was glad they did it before we fed him because I knew if they weighed him right after he ate that he’d weigh A LOT more! Here’s his latest stats:

Zach, of course, is THRILLED about the length! He texted his dad right away haha. I did ask if they can predict his overall height and she said no, but that at 2 years old he’ll be half his adult height. I guess we’ll see in a couple years what his height future will hold! 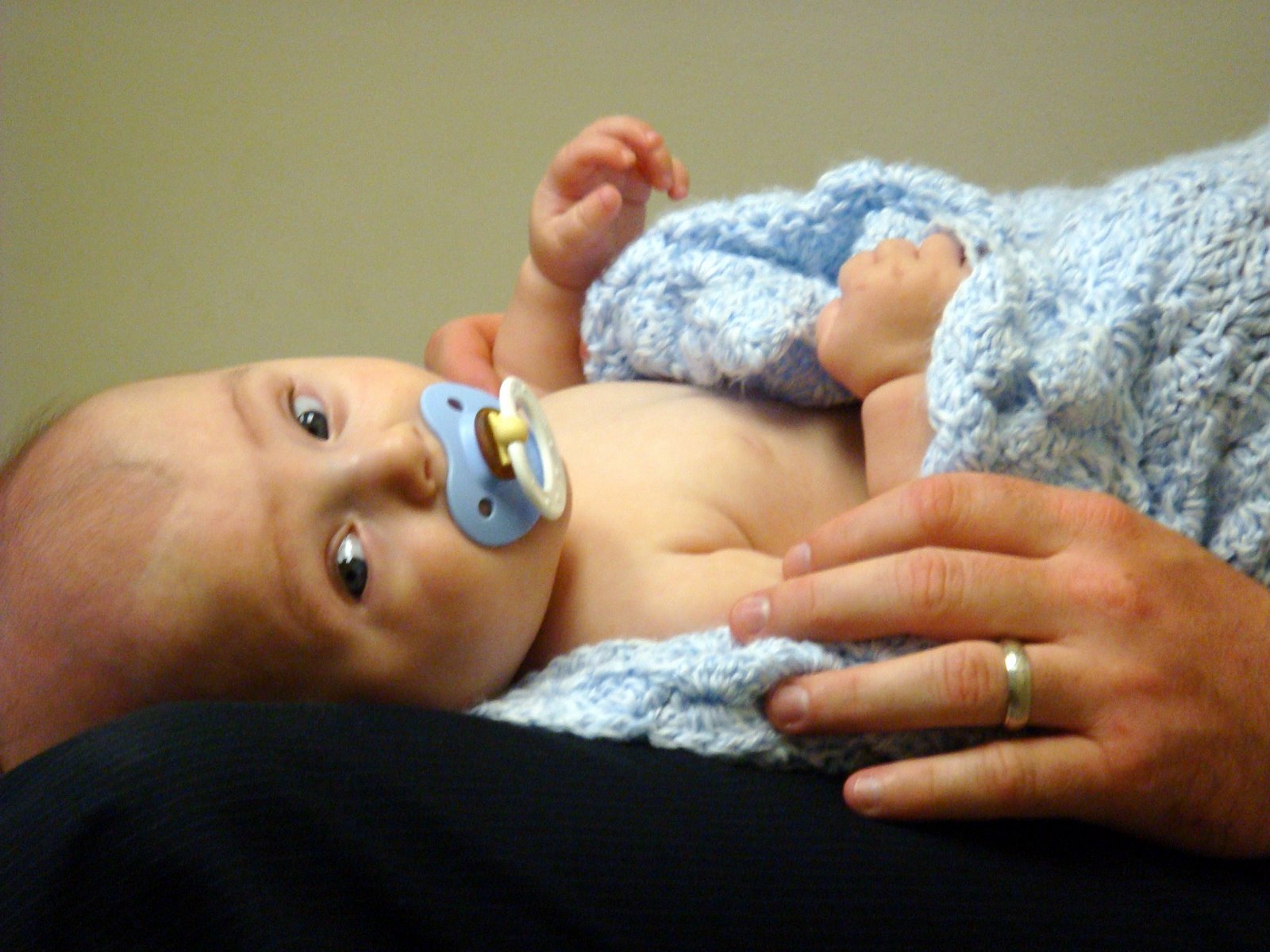 Since Kye hasn’t been sick (yet at least) and has been such an easy baby, most of my questions were rather vain ones:

His flathead? Bald Spot? She said the flathead is fine and normal and that the hair will grow back better once he is out of the swaddle because he most likely will start stomach sleeping
Inverted nipples? She said that’s normal if they are inverted and isn’t an issue at all
Eye Color? By 6 months his color will most likely stay whatever it is. She did look at his little brown spot and said that it’s just a pigment thing and doesn’t mean anything is wrong with his vision or anything like that.
Vein? Kye has a little vein on his nose and she said it’s VERY common for babies and that, while the vein is always there, it’ll be less and less noticable as he grows up
Birthmarks? I love birthmarks and think they are precious! She said the one on the back of his neck is a stork bite which is the most common birth mark. She said it’ll most likely go away. The one above his butt may stick around but since it’s so light she said it’ll most likely blend in with his skin 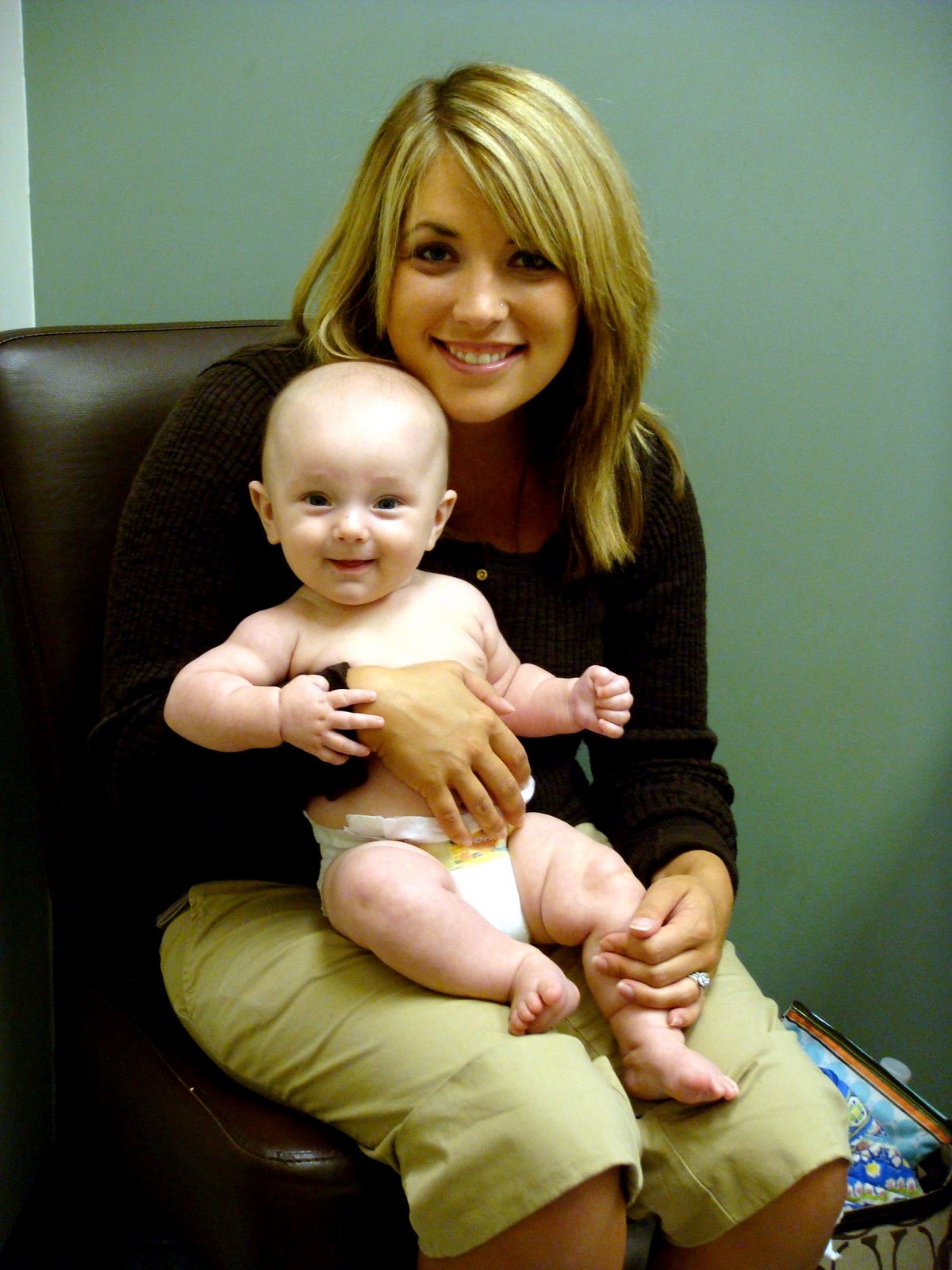 Other things we covered at this appointment included:

GERD: YUP! It’s officially off his chart! I told her we quit the Zantac about 6 weeks ago and that we’ve seen no side effects from it and so she said they will put in his chart that he no longer has GERD! Yay!
Teething: She said her son got 2 teeth at the same time around 8 months old and that there is no way to really predict when they will come in. I asked for some tricks and she said motrin (dosage is 0.6) is very safe for him as well as hurricane gel. I’m currently bidding on a Raz Berry Teether on Ebay (it’s a paci that has a raspberry looking thing on it that’s supposed to really feel good to him). So we’ll see!
Cows Milk: I told her I plan to keep on nursing but asked when he’s able to drink “real” milk. She said that he’ll probably start with cows milk around 10-11 months old.
Poop: I mentioned that he’s been pooping every 3 days and then lately more often like after each meal. She said with breastfeeding that it’ll be a lot of different times and ways until he really gets into baby food and it’ll eventually look more and more like “our” poop
Sunscreen/Pool: She okayed sunscreen! That was a relief to hear! I know he’s still under the 6 month mark but she said it’s fine! She also said it’s okay for him to go in a pool and that when we do either of them just to rinse him off and he’ll be good to go!
Swaddle: She said her son swaddled until about 6 months old and that I’ll just know when he’s finished. She said it’s not hurting his development being in it and just to let him decide when it’s time to move on.
Monkey: With the swaddle question I told her that the times he’s gotten sleepy he tends to put the burp rag, a blanket, his monkey, whatever over his face and I asked if he’s okay to sleep with any type of blanket because I know the whole SIDS scare thing they tell you not to. She said a Lovie is fine…and guess what? His monkey IS a Lovie! She said the size of them is perfect to insure the baby won’t suffocate and that it’s fine to give that to him once he’s done being swaddled! Yay! Good job on buying that Mom 🙂
Ear Wax: The child has his daddy’s ears and gets quite a bit of wax in them. I didn’t know how often I should clean them and if I should use q-tips etc. She said each night during his bath to just take the washcloth and kinda wipe them out. So Zach’s incorporated this into the nighttime bath ritual.

This appointment Kye had to have another round of shots. This time the cocktail included: Polio, Pneumococcal Disease, Diphtheria, Tetanus, Pertussis, Rotavirus (which is taken orally) and Hib. Again, Zach was there so I didn’t have to be in the room! 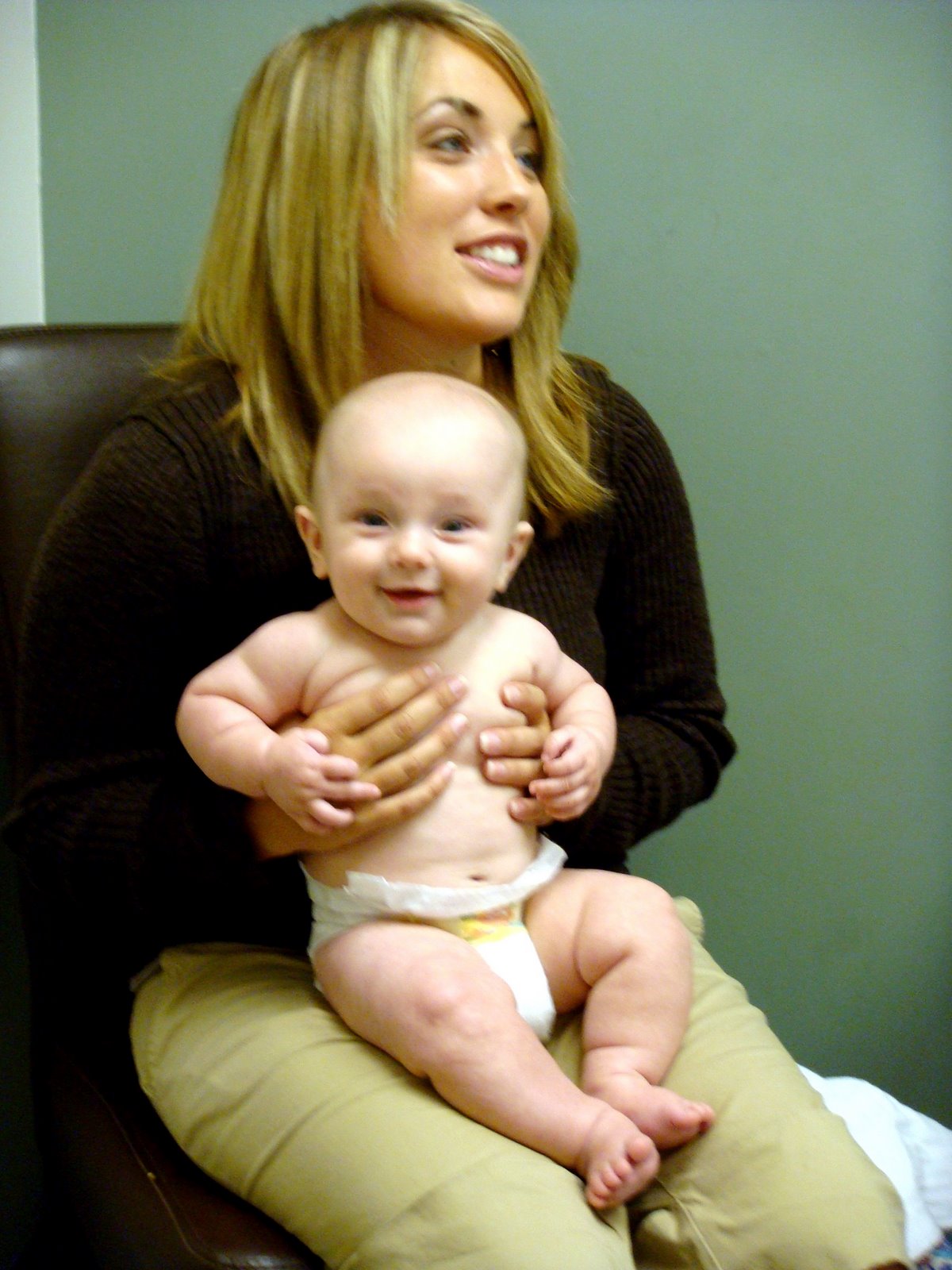 The biggest news of the appointment was the whole baby food talk. I’ve been seeing Kye showing signs that he’s “ready” but didn’t want to do it too soon since most people recommend waiting until they are 6 months old. I talked to the dr. and she said that with his weight he’s ready when I am. Don’t get me wrong, I think Stephanie is wonderful, but I am a person who follows directions so therefore…I NEED DIRECTIONS! She was not as informative as I needed for this whole food thing.

She told me that cereal is not a need but I can give it to him if I want. She said she mixes juice with her baby’s cereal (um sugar…no thanks!) and that she waited until her son was 5 1/2 months. She told me to start with any vegetable and give him the same one for 5 days giving him 1/2 jar twice day of the stage one type food. She said to do it at any time of the day and to do all the veges then start with fruits. We didn’t even discuss meat, I forgot. She also said it’s fine to start giving him diluted juice (1 oz mixed with water) as a snack.

I knew right off I’m not doing the juice thing. He doesn’t “need” it and it has a LOT of sugar so I don’t feel comfortable with that yet. When I left the dr. I had to go by Publix anyways so I got several things of food and started to consider my options on this whole baby food stage!

Overall it was a good appointment, especially the news on the length percentile haha. We don’t go back until the END of Sept and she did tell me that I should call up there when I have questions and not to feel like I’m bothering them. We’ll see…