5. Comment #5: “Forddygirl And I facebooked it :-)” CONGRATS TO KELLY FORD!!!! Thanks to everyone for entering…I was pretty shocked that it got 97 entries! Hopefully I’ll be doing another fun giveaway soon!~

Britt’s eighth week of life was from Jan 24 – Jan 30th. It was another tough one for several reasons…

Sleep: She started waking up at night again! This was a new thing for us as Kye never did that. She started waking up at 3, 4 or 5 each night and I’d feed her. I wasn’t sure if it was a growth spurt or what so I figured it was better to feed her, especially since it was always so far away from our morning wake up time. Plus my breasts literally ached hearing her cry as they were mega full. It just made sense to feed her and she’d typically only eat for 30 min or so (short for her!) and then be back to sleep. I had been SPOILED by her sleeping through the night. When the early wakings happened, it Killed me. I had a hard time staying awake throughout the day and literally felt more exhausted than I did when she was first born. Maybe my body had gotten used to solid sleep so it was harder for me to go back to not having it???

This week I also gave up looking for sleep cues. The child just doesn’t have any! If I waited for her to yawn, get fussy, or seem tired then she’d never nap! Instead I started to just go by the clock. When I’d feed her at 10:30 she’d be done at 11:30 so I’d put her down at noon. Her awake time lengths (including the time to eat) are 1 hour and 30 min. Typically if she’s even up a few minutes extra she does fine.

She started to wake mid-nap again and wouldn’t go back to sleep and, sure enough, it’s her second wonder week! Here‘s what was going on during this developmental leap. I did notice that she started to study things a lot more so it went along with this Wonder Week. I’d let her cry it out (cio) at the start of each nap, and she typically won’t get too worked up and falls asleep quickly. However, half way through the nap if she was upset I’d go in and help her. She would seriously stop crying and SMILE at me as soon as she saw me. Little trickster 🙂 I know she’s too young to manipulate but dannnng it felt like that’s what she was doing! I’ll walk in while she’s screaming  Then she instantly stops screaming when I pick her up and starts screaming again when I put her down. Most of the time the only way to get her back to sleep was to hold her (with as little stimulation as possible) then lay her back down once she was asleep. I hate doing this as it feels anti-babywise since I’m a “sleep prop” in getting her to sleep but at this age the most important thing is that she IS sleeping…and I do think that she’s a very, very social being and may just need Mama sometimes, especially during Wonder Weeks!

Schedule: Her schedule was the same as Week 6. The only thing that did occur out of the norm was that on Sunday night I accidentally slept through the 10:30 dream feed. Zach was hardcore asleep watching tv on the couch and my “nap” from 9:30-10:30 ended up lasting until more like 11:30 when Zach walked in and woke me up. It’s pretty obvious that you’re exhausted when your husband finds you dead to the world in the bed with your arm outstretched holding your cell phone. I guess, in my zombie state, I grabbed the phone and turned off the alarm?!? I have NO memory of any of this. Obviously we didn’t wake her to eat at 11;30 and just went to bed to see what would happen. Well…she woke at 5. Just like she had been doing. That’s when we realized it was a little snack she was craving and it was more a routine for her than a need in the middle of the night. A lot of other stuff was going on that week (see more below) so we didn’t mess with her and I went back to the dream feeding and waking up to do a snack for her when she’d wake up.

Other Stuff Going On This Week:

We made our first batch of cookies with Brittlynn as the big helper! 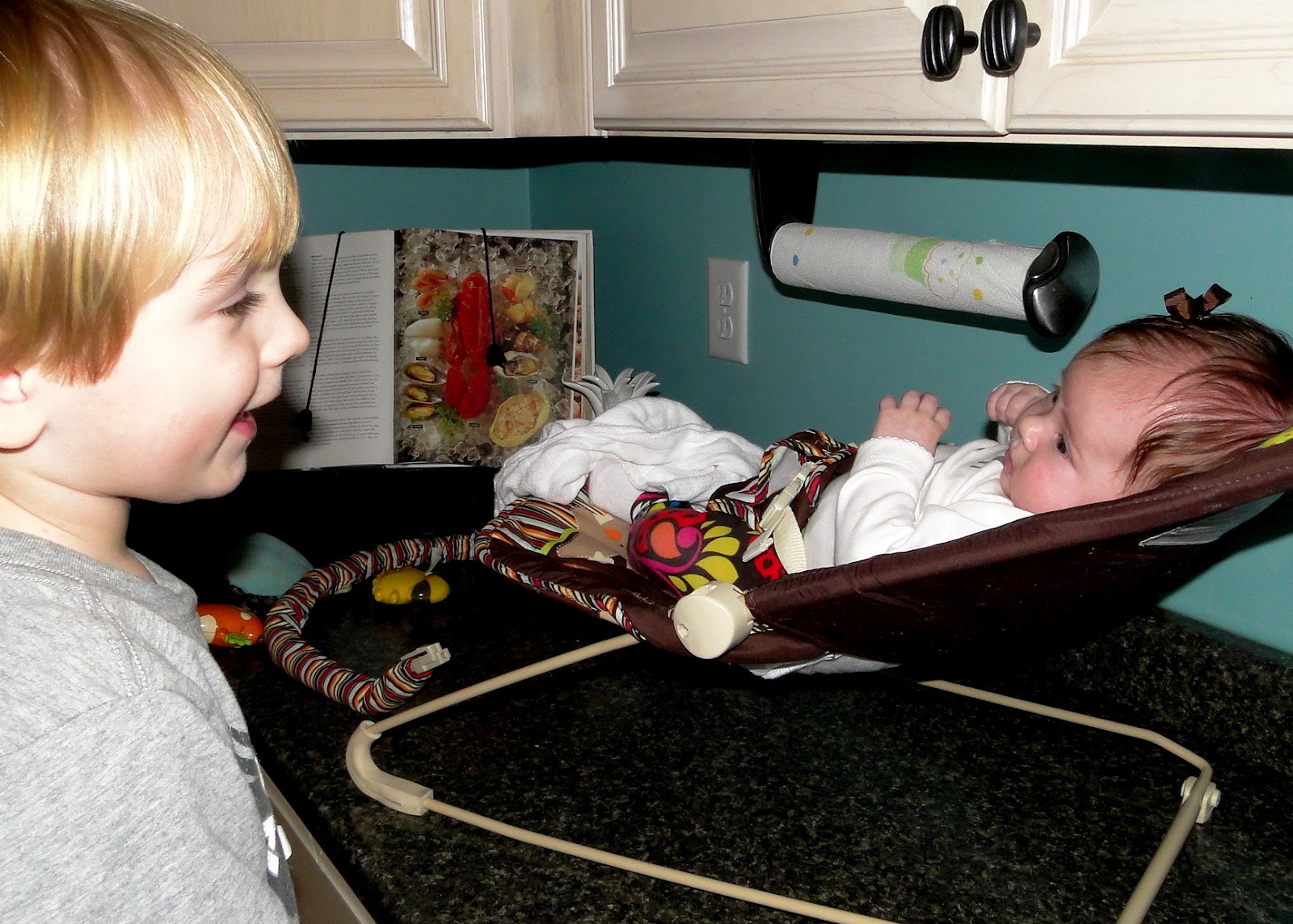 She enjoyed watching Kye as he kept her well entertained 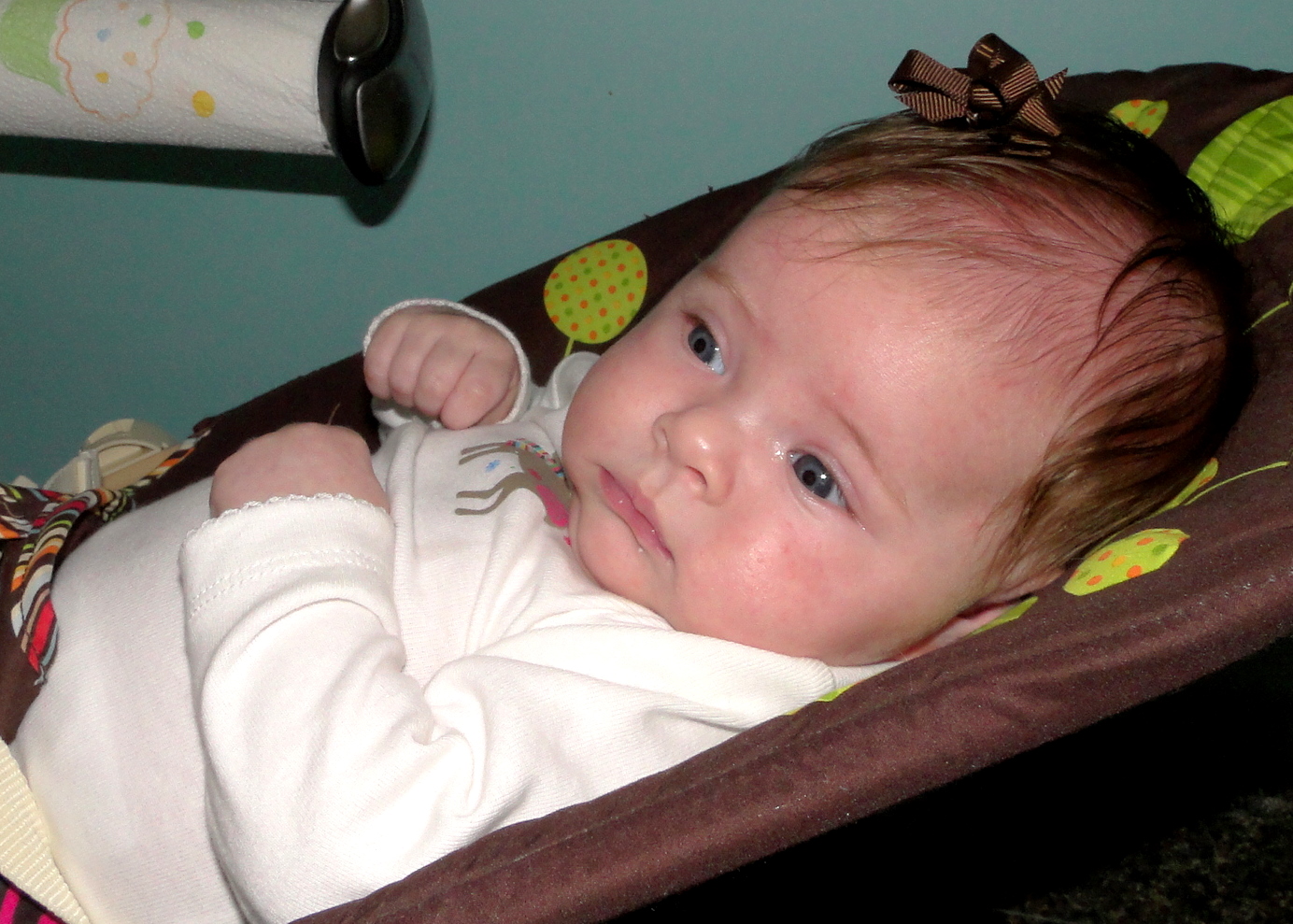 She loves to stare and stare 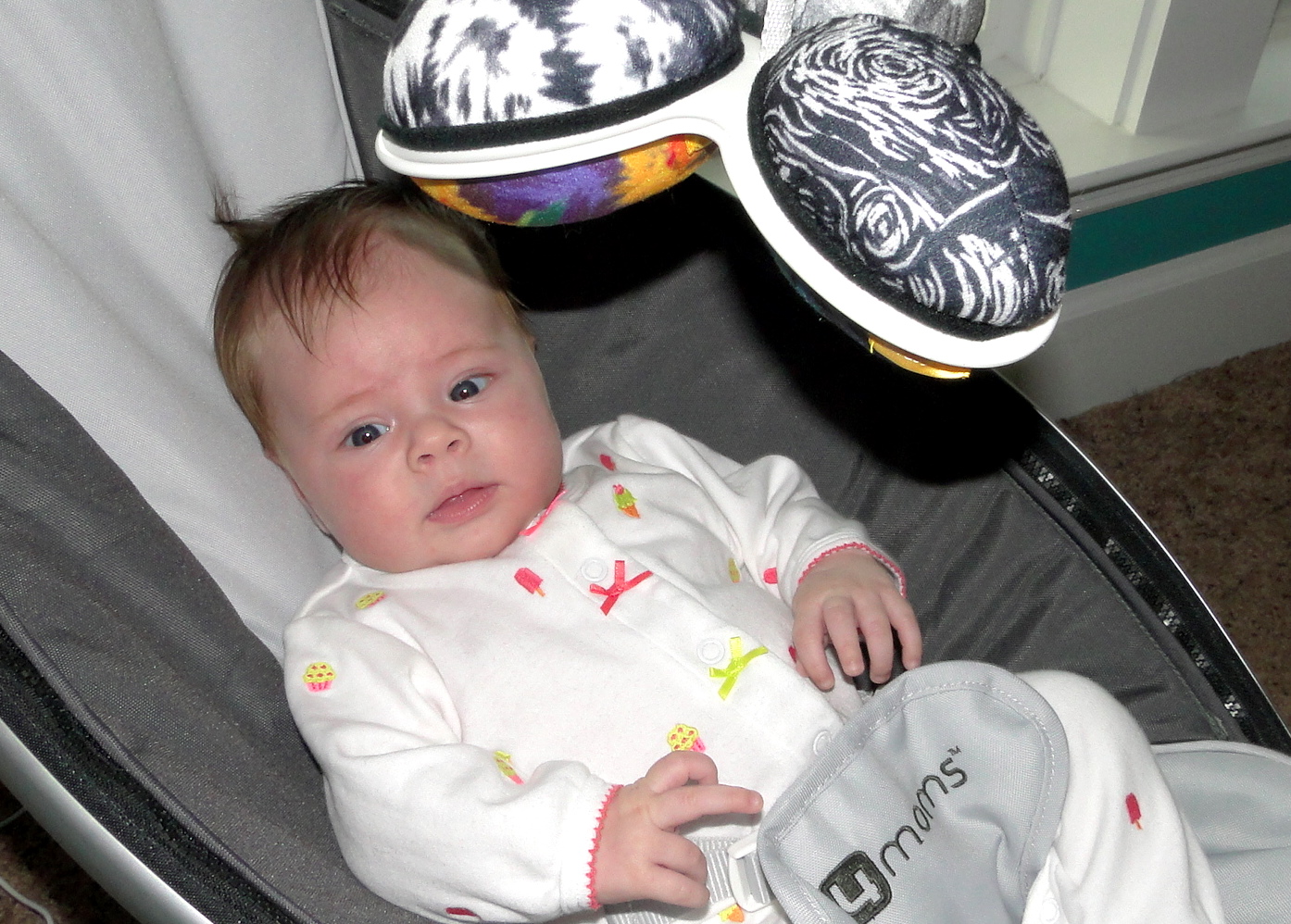 Here’s a video of her enjoying her Mamaroo swing! 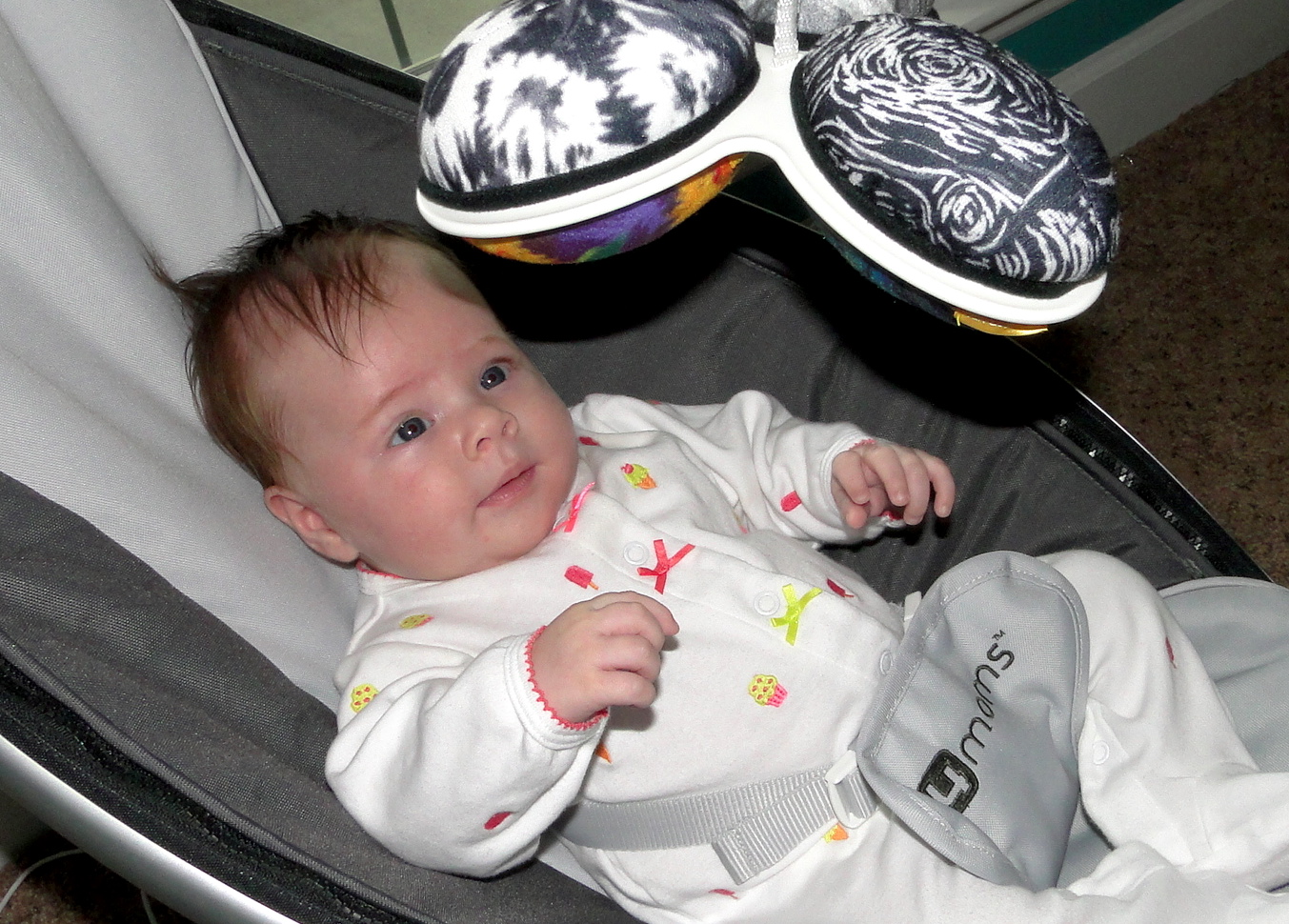 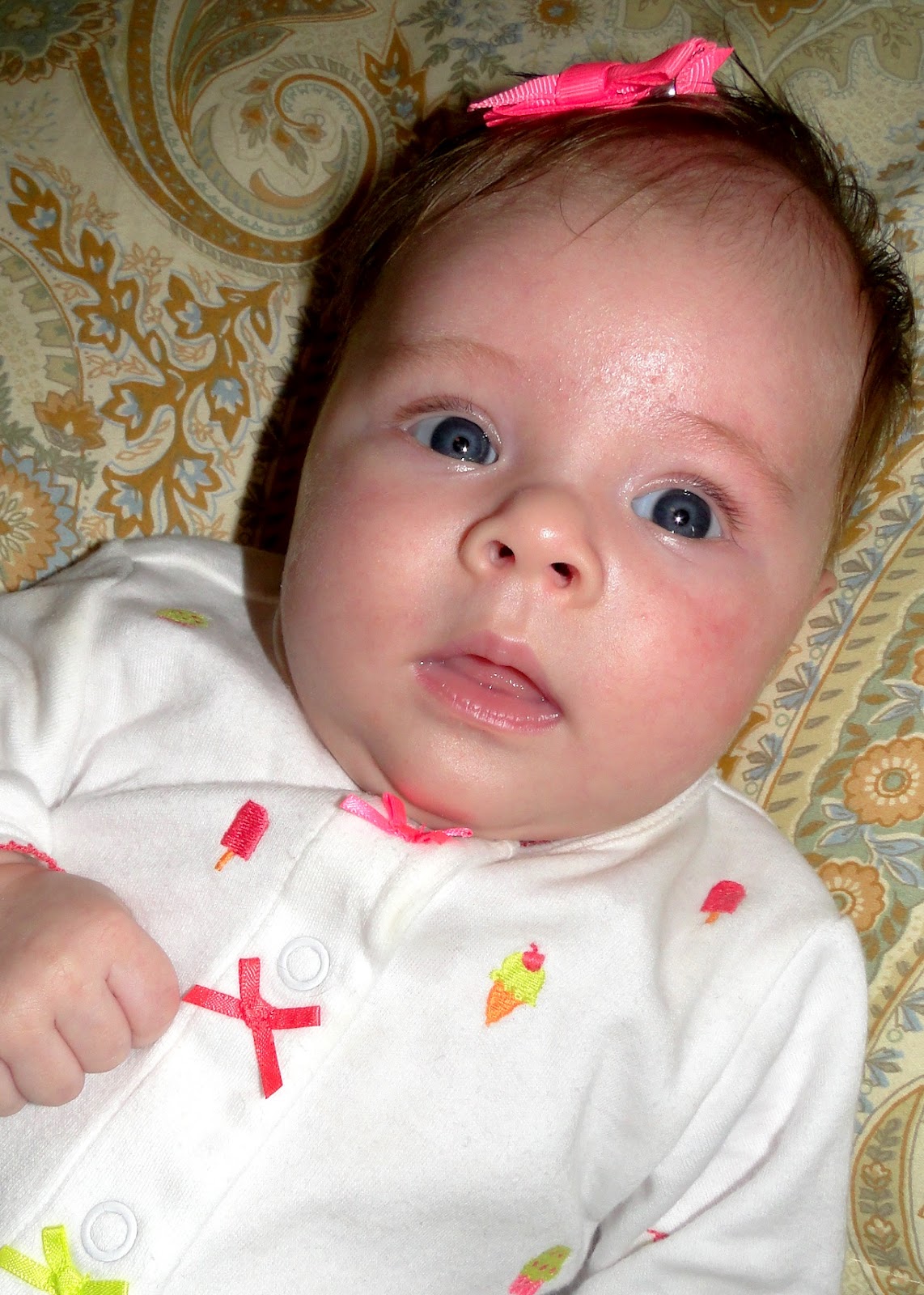 My view from the dinner table every night!!! Daddy across from my and my sweet kids beside me! 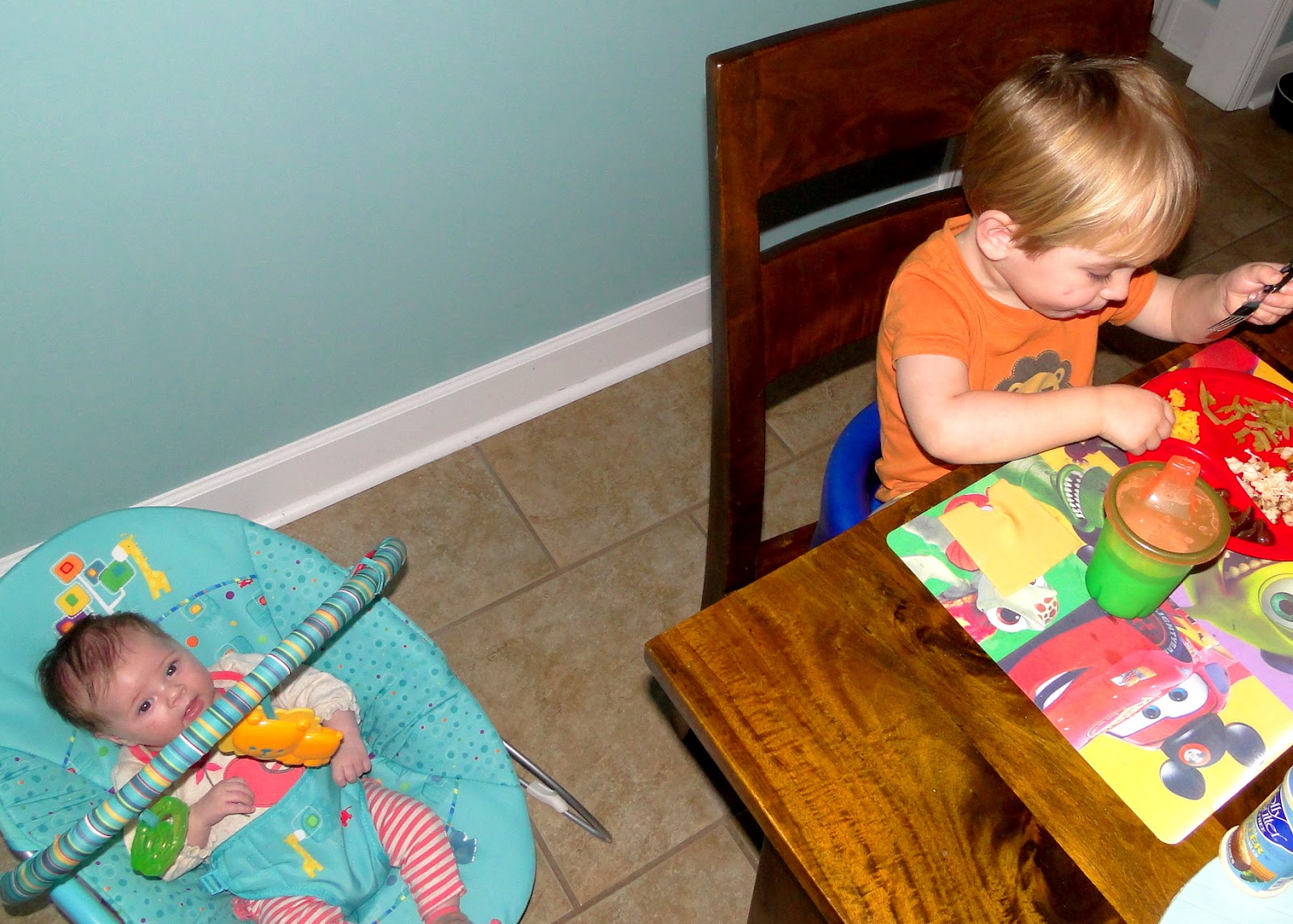 Zach and I have a new ritual for date nights…every monday night we watch The Bachelor together! I love it!!! Seriously, the show SUCKS without Zach. We have to be together to watch it because we love critiquing everything that happens and making fun of it the whole time. Our town recently got an Olive Garden and, since Valdostians are OBSESSED with it, it’s been mega crazy busy. Not that we’ve been able to go on a real date anyways! But still! Zach went and picked us up a meal to go and it was nice! 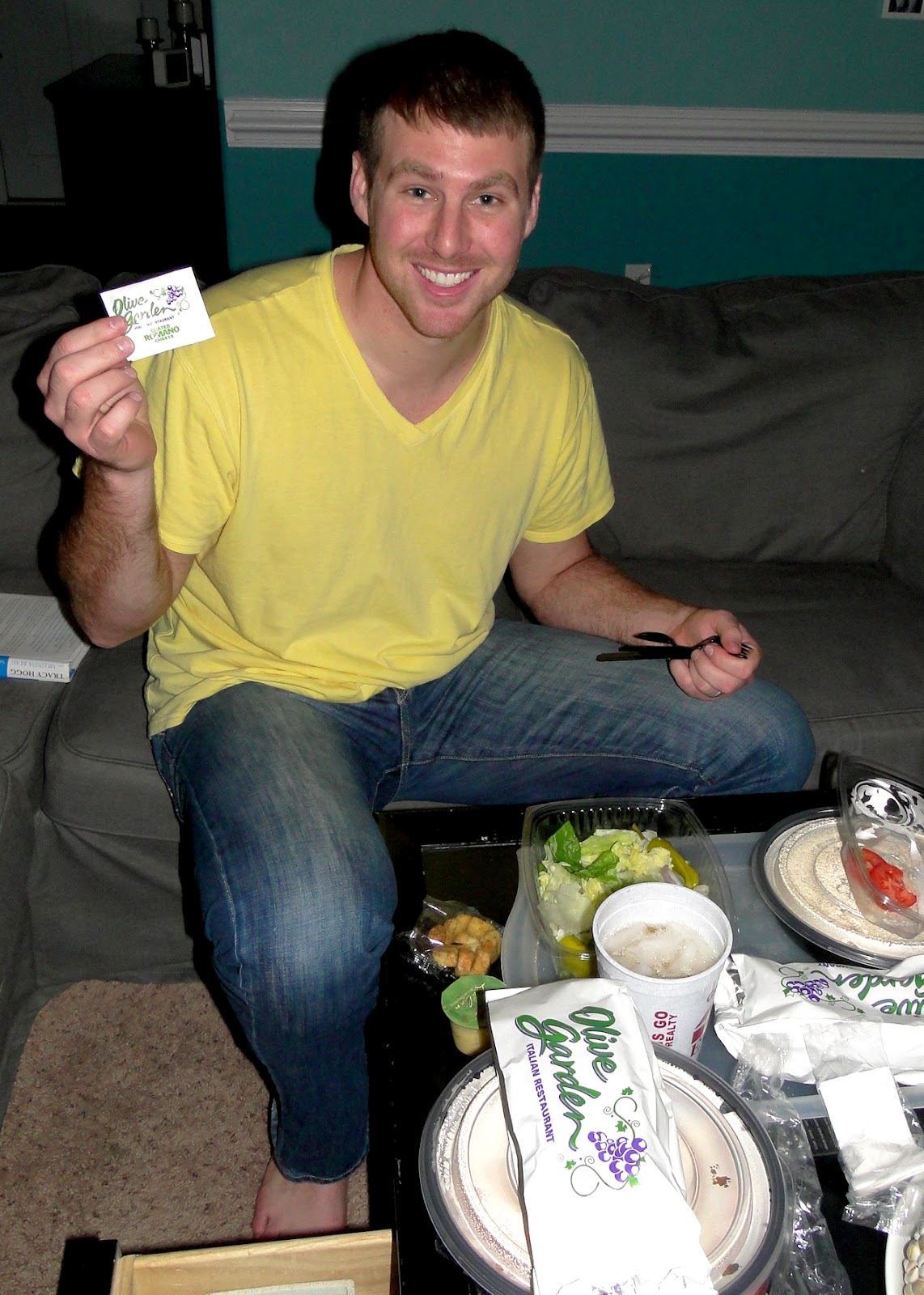 We did this deal where you get three course for $12.99. It was pretty good but the dessert was like three bites haha! 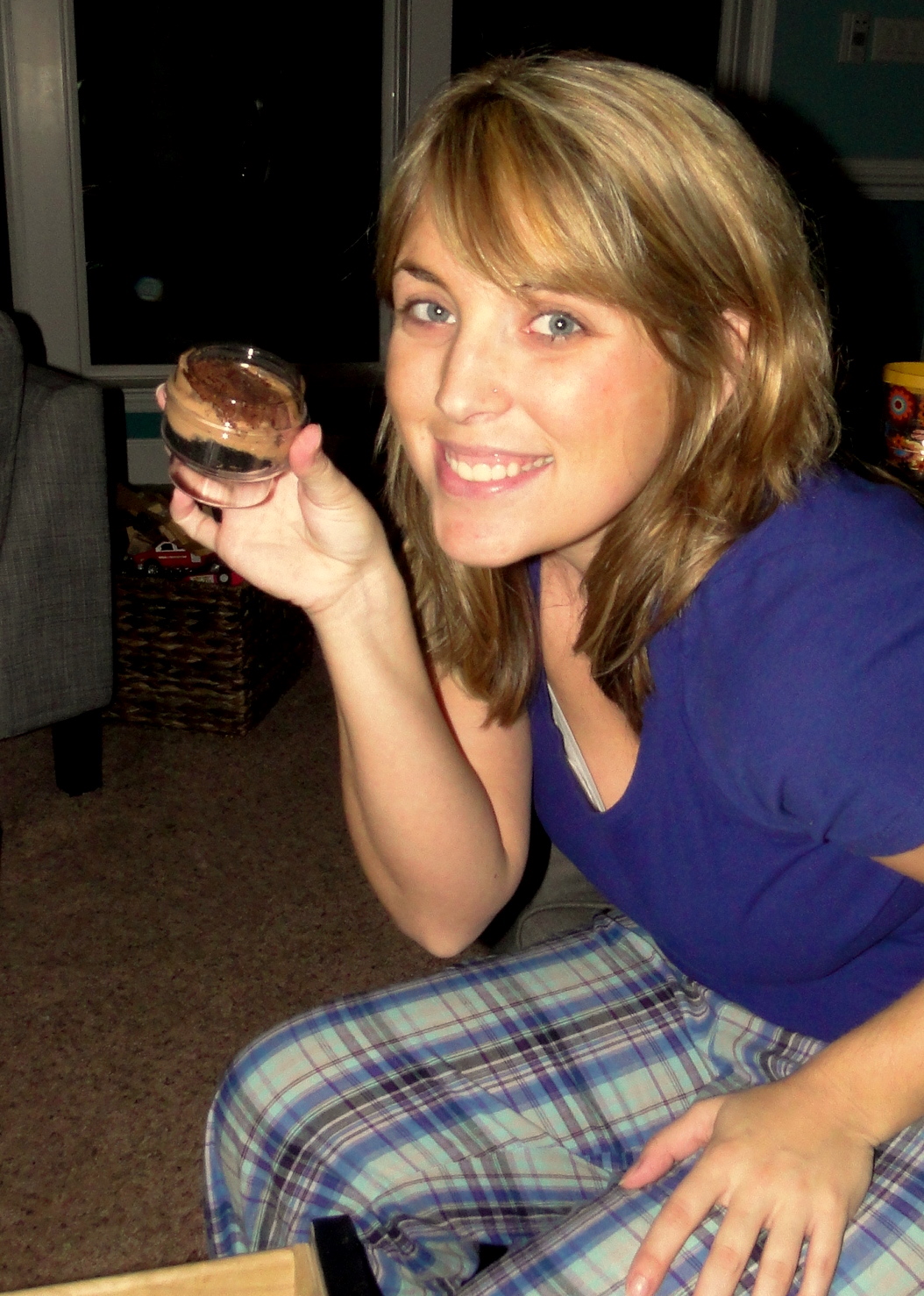 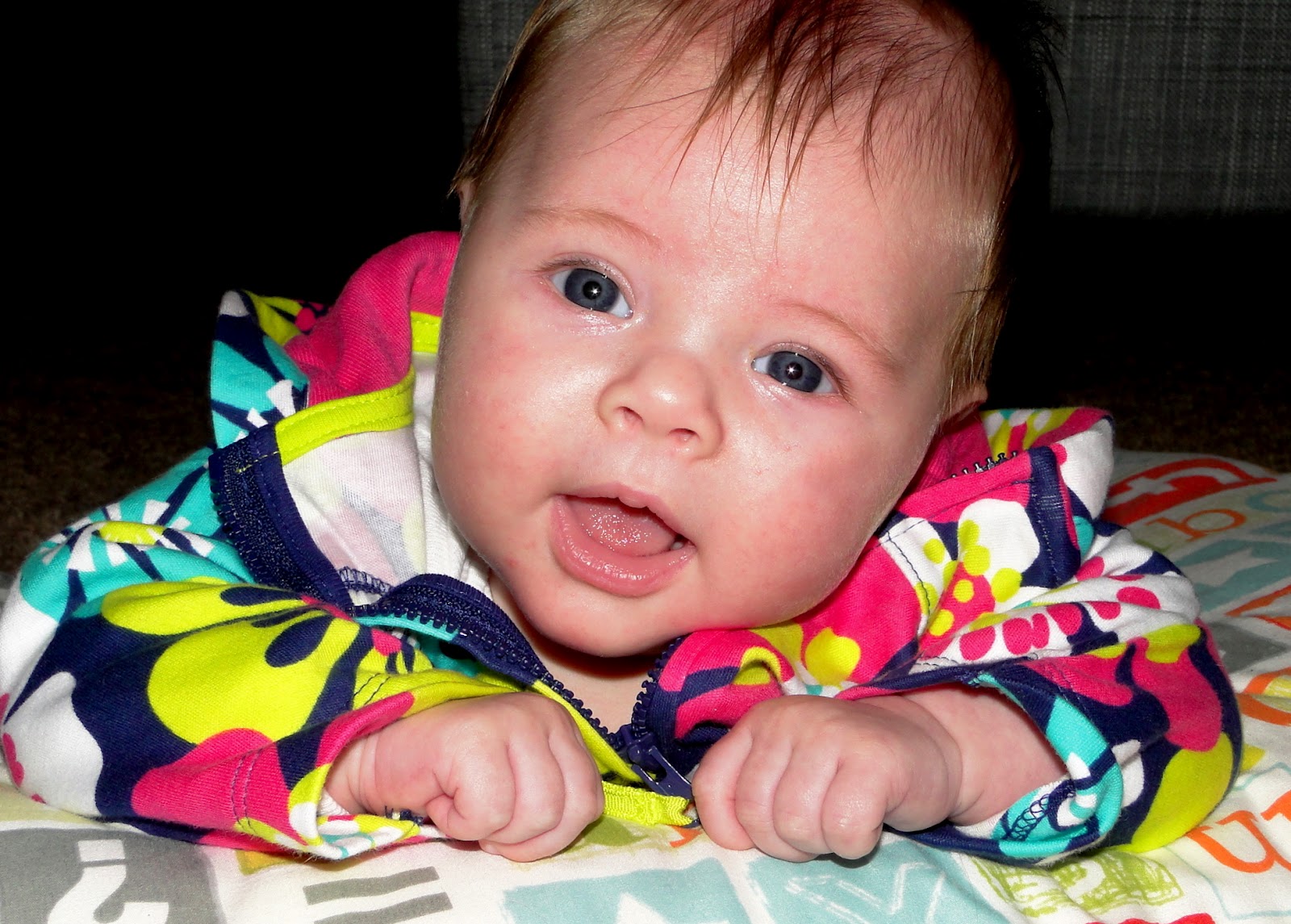 I LOVE that she still has her hair, even if it is crazy 😉 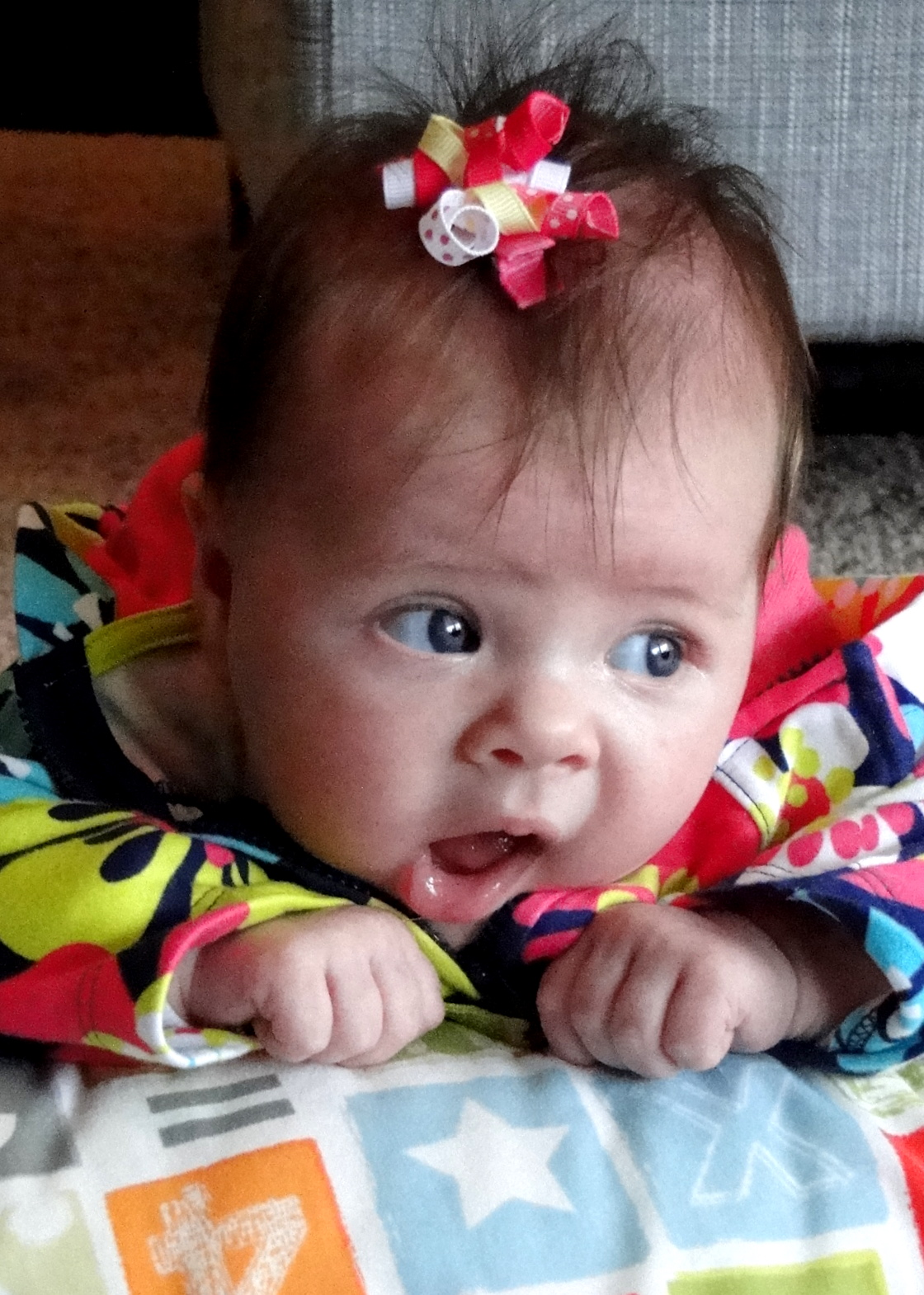 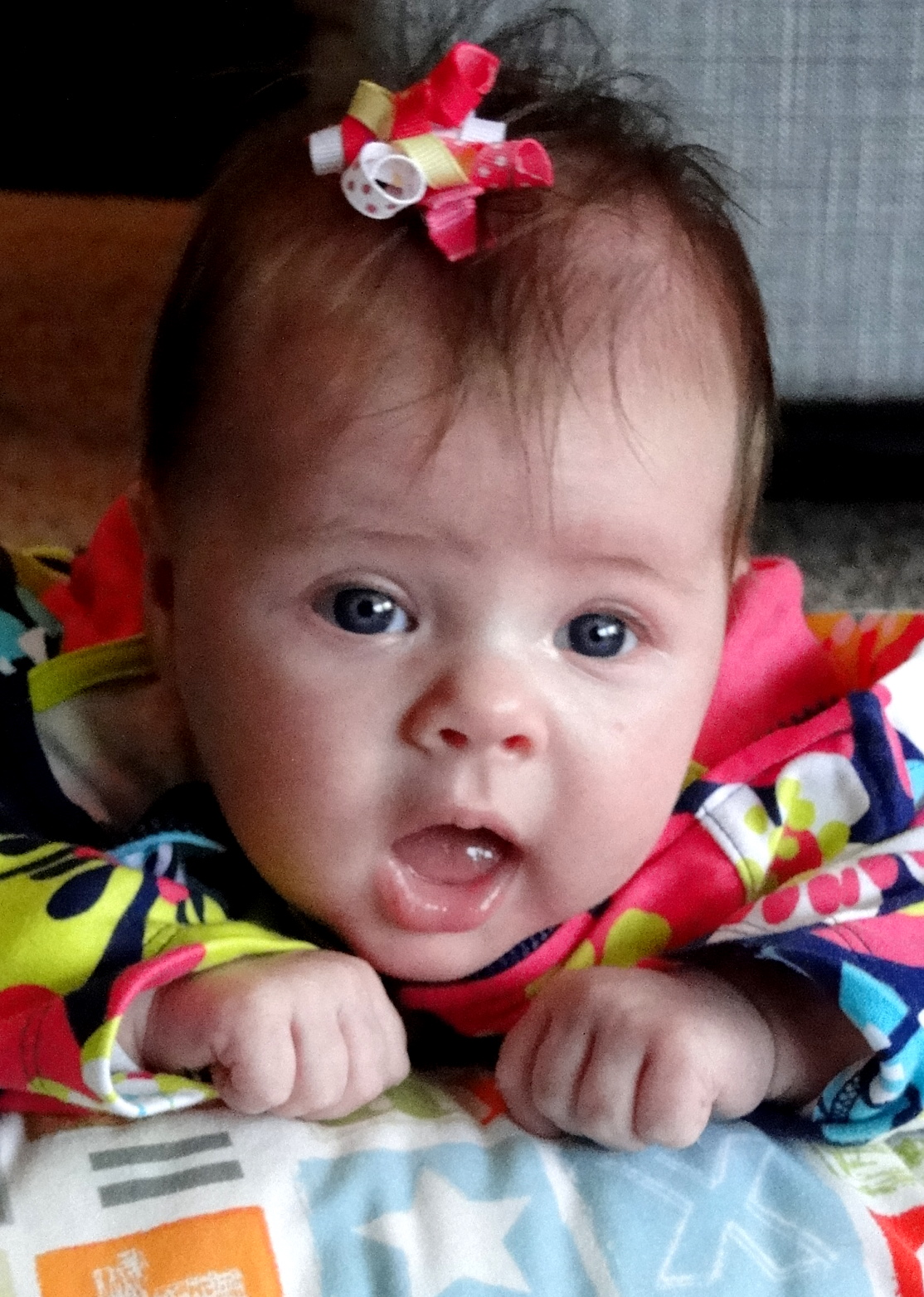 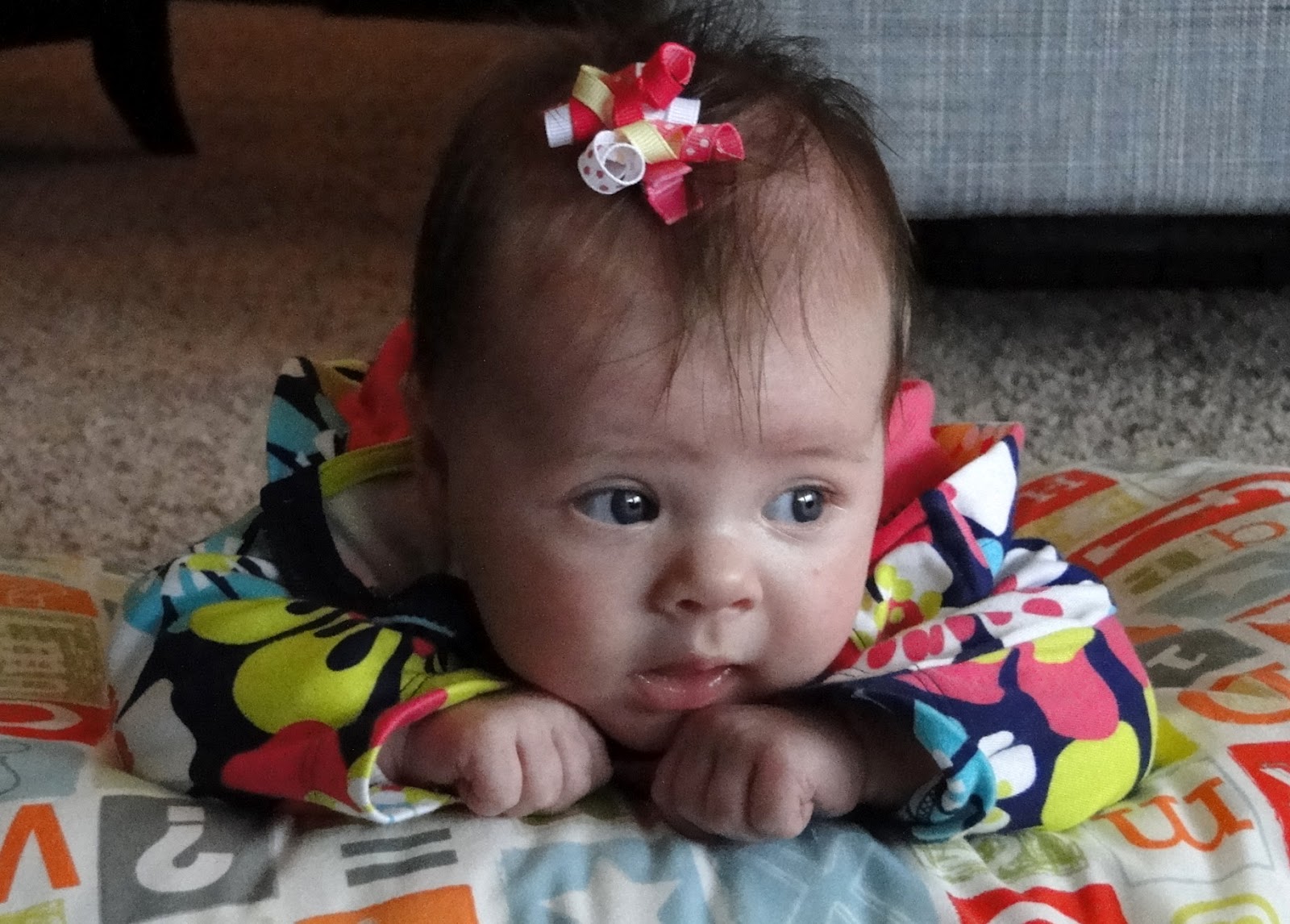 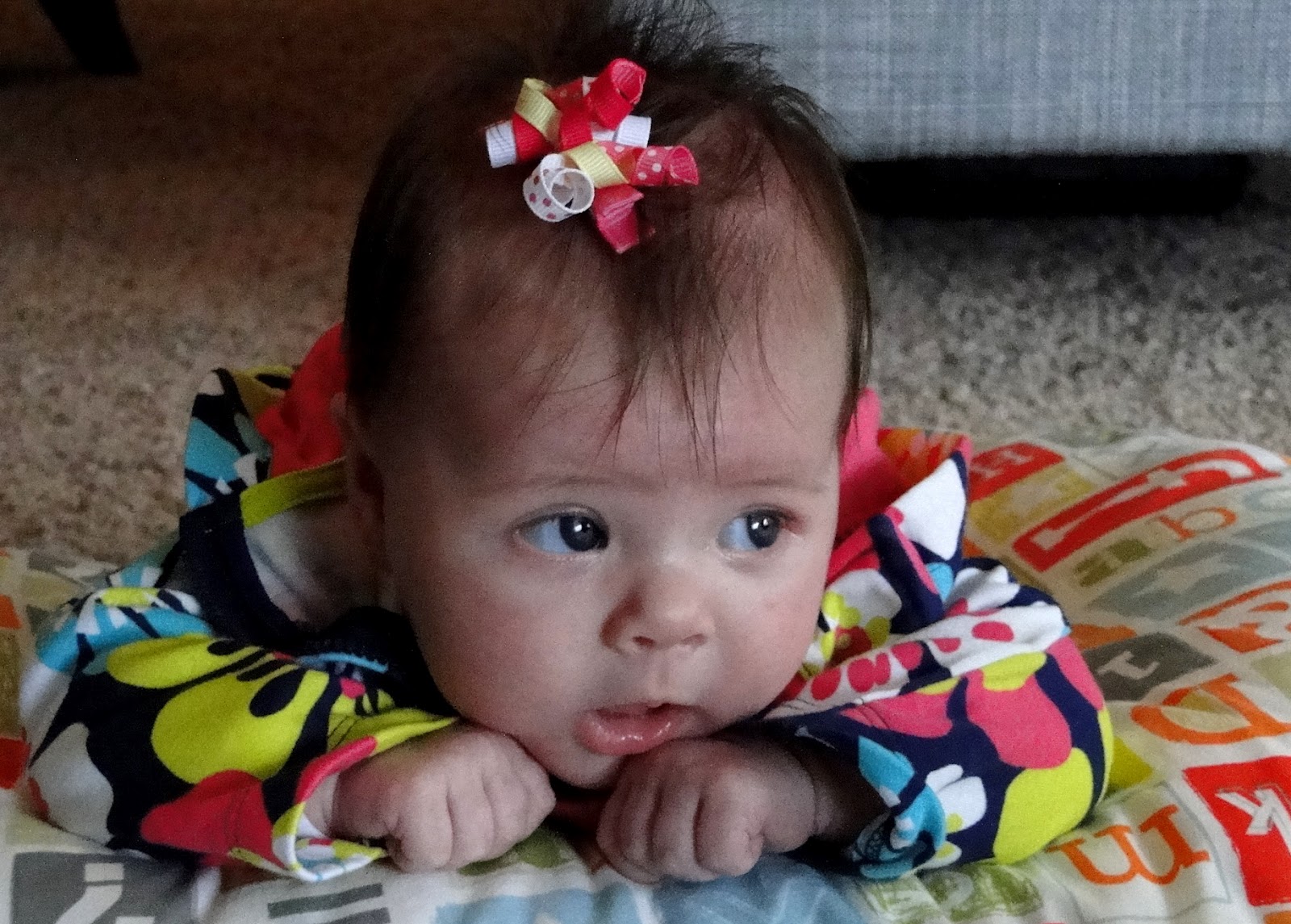 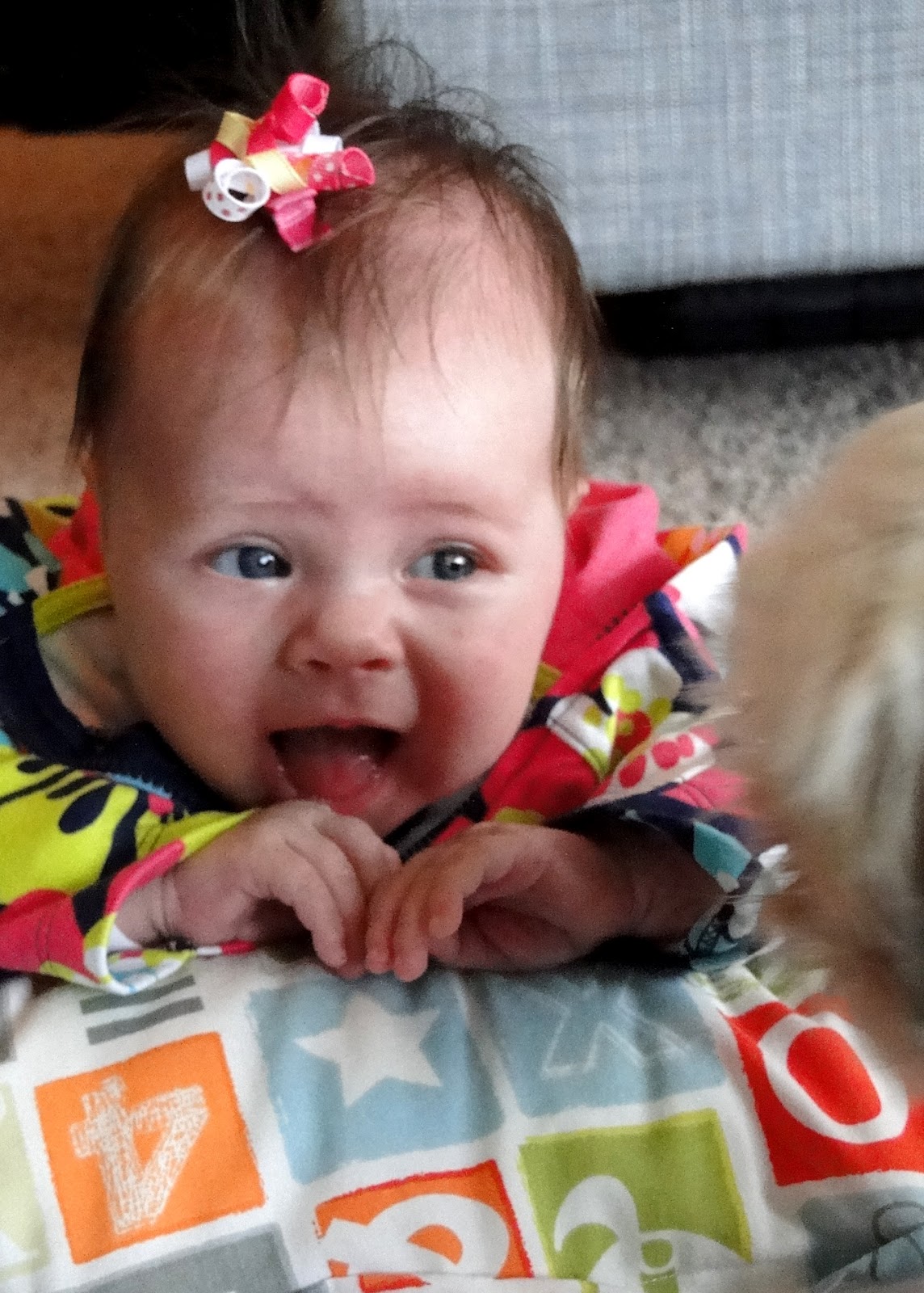 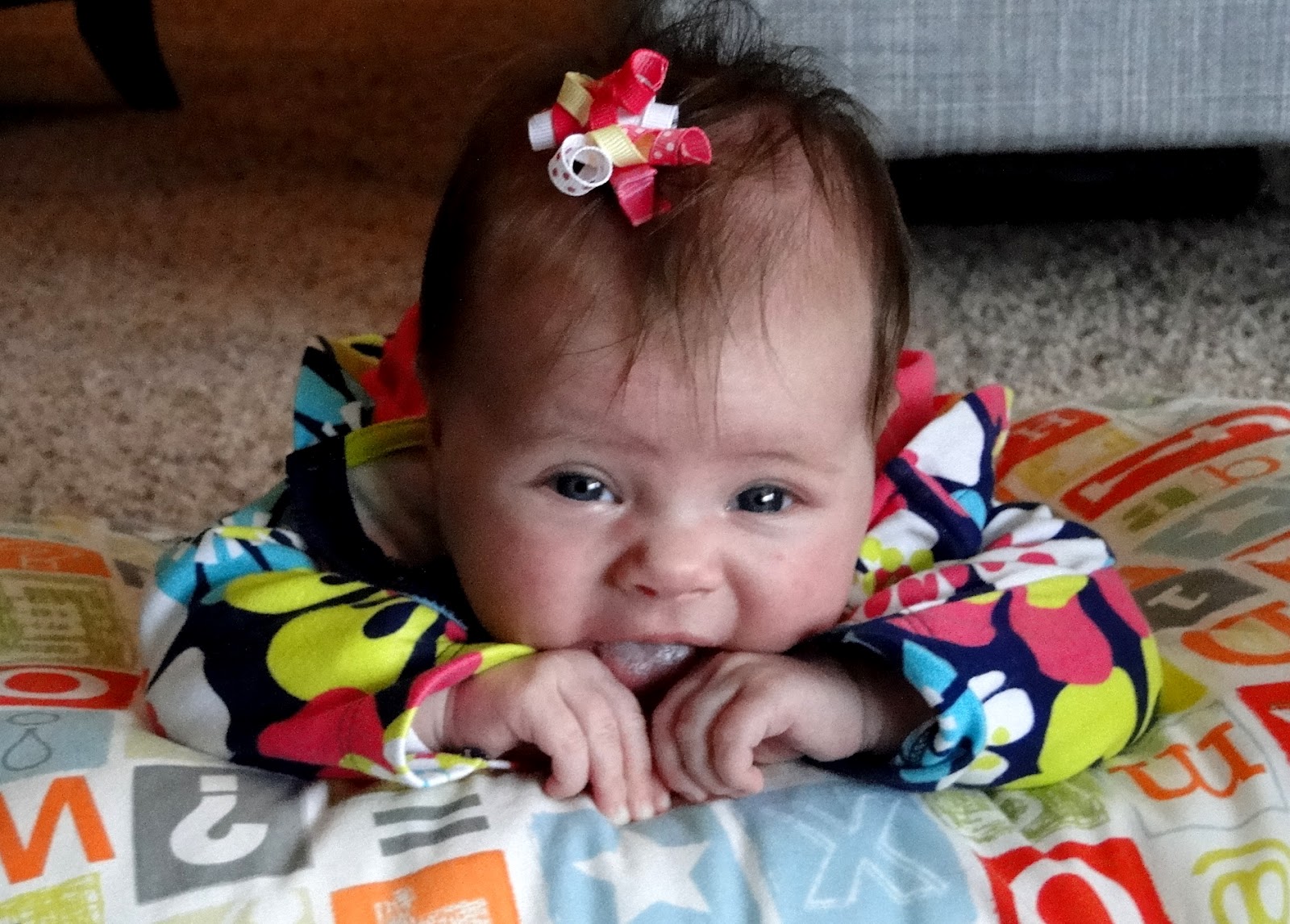 Postpartum Update: Well this was a ROUGH week. Very rough. Really it was partially during her eight week and partially during her ninth week so you’ll hear more whining from me in the next weekly summary post 🙂 I FINALLY stopped bleeding, or at least it went to light spotting, and I had my “six” week postpartum checkup. I got to see Stacy (yay!) on Wed Jan 25th when I was actually seven weeks postpartum. Kye was at school and actually went home with Mrs. Charlotte for his nap that day. I was able to go to my appointment, go home and nurse Britt, then go get my hair done. It worked out nicely!

My appointment went smoothly. I was able to see Teresa too and I’m glad she enjoyed my thank you card (and massage!) I sent her. Stacy checked me out and it hurt. Thankfully she didn’t have to check out my butt…with Kye I was cut then ripped allllll the way so she had to check out that hole at my postpartum check up (you can read about that visit here). It’s funny that the check up this time was more painful than the one last time when I didn’t have nearly as much ripping/cutting this time around. She said I was STILL not fully healed!!! One stitch was still lingering and I still had a tender/red spot. 🙁 That means I did not get the “all clear” for sex. Very disappointing and she said I needed to wait another couple of weeks to let the stitch fall out and the area heal. She also said it’s important to get lubrication b/c nursing causes dryness. Great. I was pretty bummed 🙁 She did get me a refill on my prenatal vitamins and got me a prescription for birth control. It’s a type that is safe to use when nursing and I need it since I get my period so quickly after giving birth…even when exclusively breastfeeding!!! It was great getting to catch up with her and crazy that I won’t be back in there for a YEAR!

The day after my visit I started bleeding again, heavy. It was all very strange. I felt like something wasn’t right and that I shouldn’t still be needed thick pads after this long of a time period. I was also more tired than I had been right after I’d had her. Like falling asleep while nursing her during the day exhausted. I could barely function and just didn’t feel like myself. I also got mega intense headaches that made focusing on my parental/wife/household duties even tougher. I was pretty scared that something was seriously wrong with me. I was supposed to go to Atlanta for the day on Saturday for some of Casey’s wedding showers and I couldn’t do it. SO not like me. But the night before I knew I was just too tired to try to make that drive.

I started to get worried, as did Zach. He was so sweet how concerned he was. I, stupidly, googled my symptoms and read all about new moms who had a piece of the placenta still inside of them and how it caused the extended bleeding and other things to happen. These women ended up having to get a dnc in order to get completely cleaned out. I texted all my go-to prayer mamas and asked for prayers with what I was going through and how concerned I was. It was a crazy week for the “down there” areas…I was still bleeding, Britt was having green poop that worried me, and Kye was dealing with his uti. Not fun!!! Week eight was a rough one on me and sadly week nine only got tougher…so glad I have such adorable children and a hot husband to keep me smiling huh? 😉

If you want to see what Kye was up to at this age, here is his week eight summary! It’s so great that at this age Babywise efforts really start to pay off, Kye was just as happy as Britt is!!!