This past weekend we went to Melbourne to celebrate my cousin, Susi’s, graduation from high school. We left Friday (May 14th) afternoon and it was one of the worst car rides we’ve had in a LONG time. Kye wouldn’t sleep for his nap and he literally tried to get out of his car seat (a first!). It was quite a struggle and we were thankful when we pulled into Mom’s driveway so he could get out.

It was crazy because right when we got him out he started walking!!! Now he’s taken some steps here and there but hasn’t started to walk more than crawl until now! It was so neat that he officially started walking for Gramma…I think she needed the boost and I know it made her weekend to see him walk like that. The three of us just sat in her living room for an hour watching him run all over the place. Sure, he fell a LOT but he just kept getting back up and going for it some more. It was a Crazy Boy Kye afternoon for sure and we loved every second of it!

I know this is mean but doesn’t he look like a blind man with a cane? 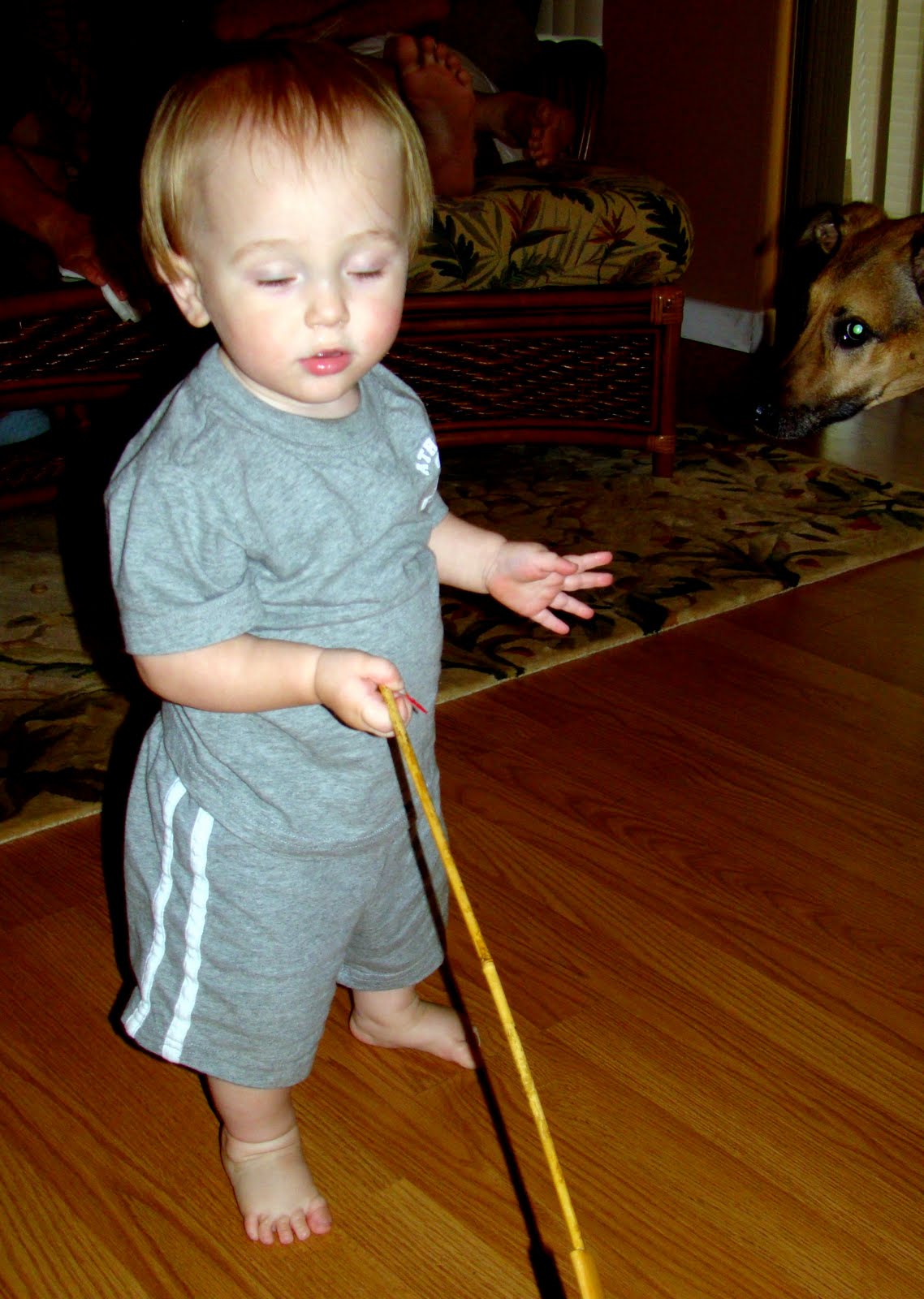 being Crazy Boy Kye and climbing on the chair 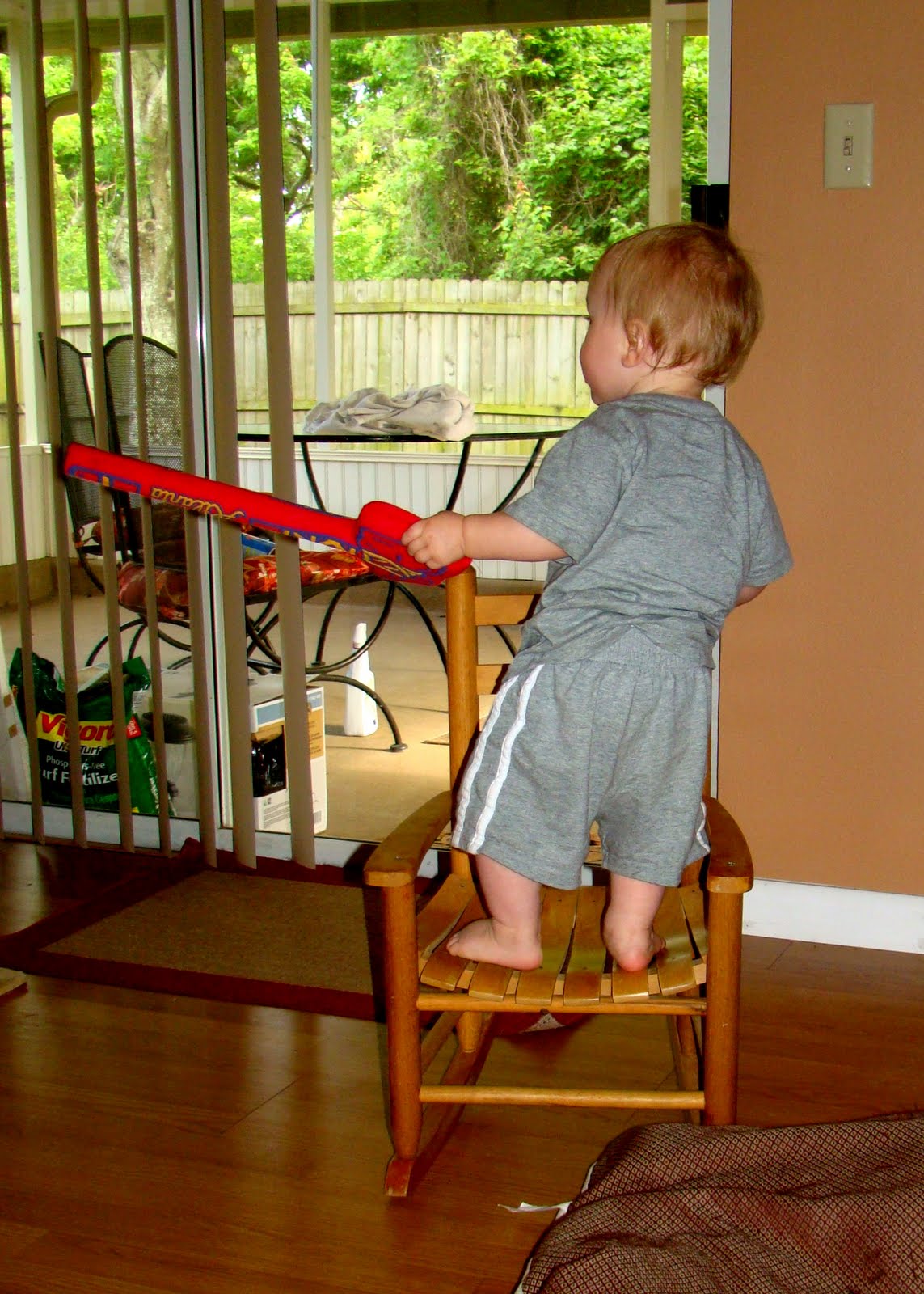 Throughout the weekend his walking only got better and better and he crawled less and less often. I took a LOT of videos (as walking is something you can’t really capture in pictures) so here they are!

so cute playing with MY old rocking chair 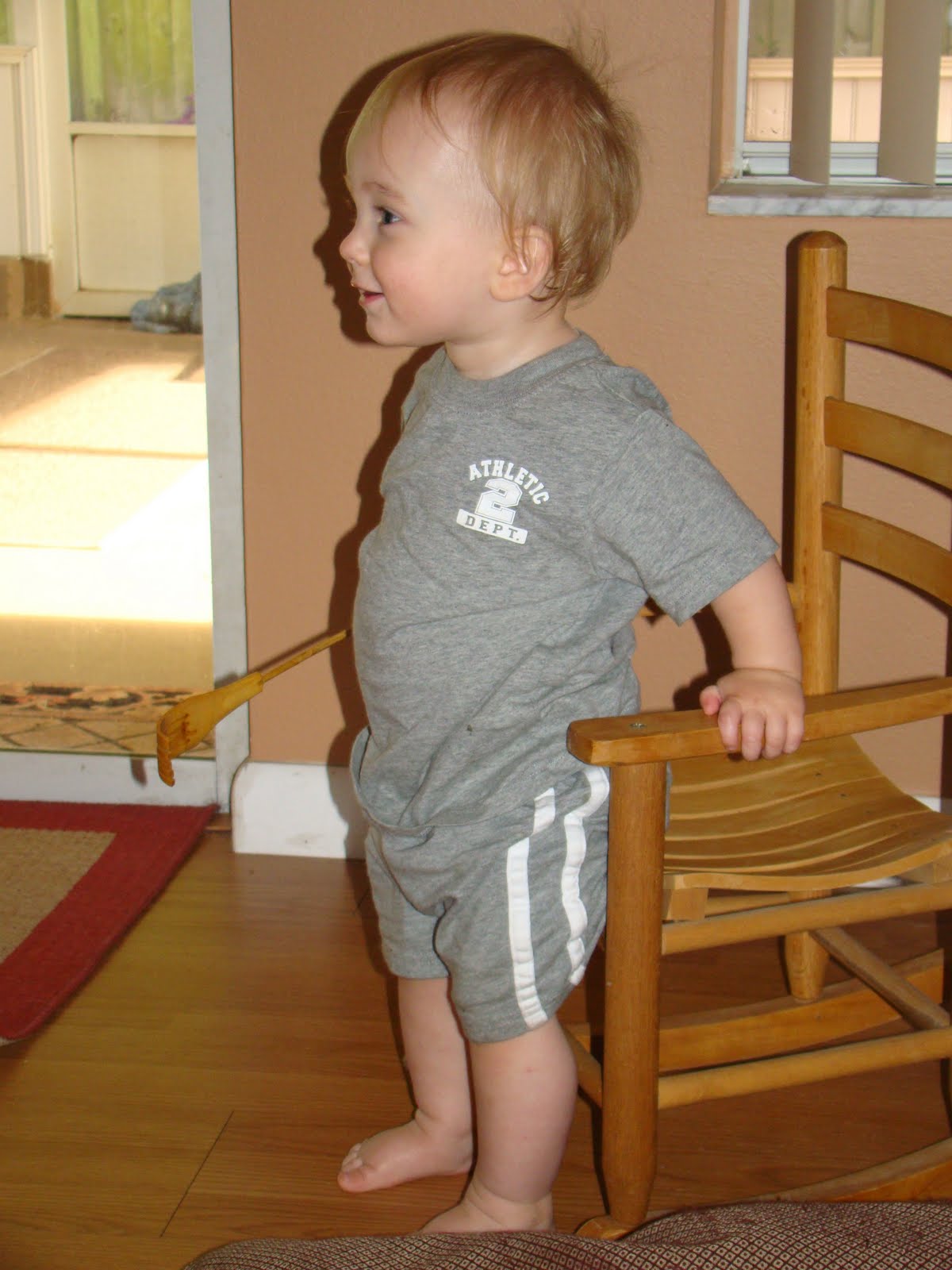 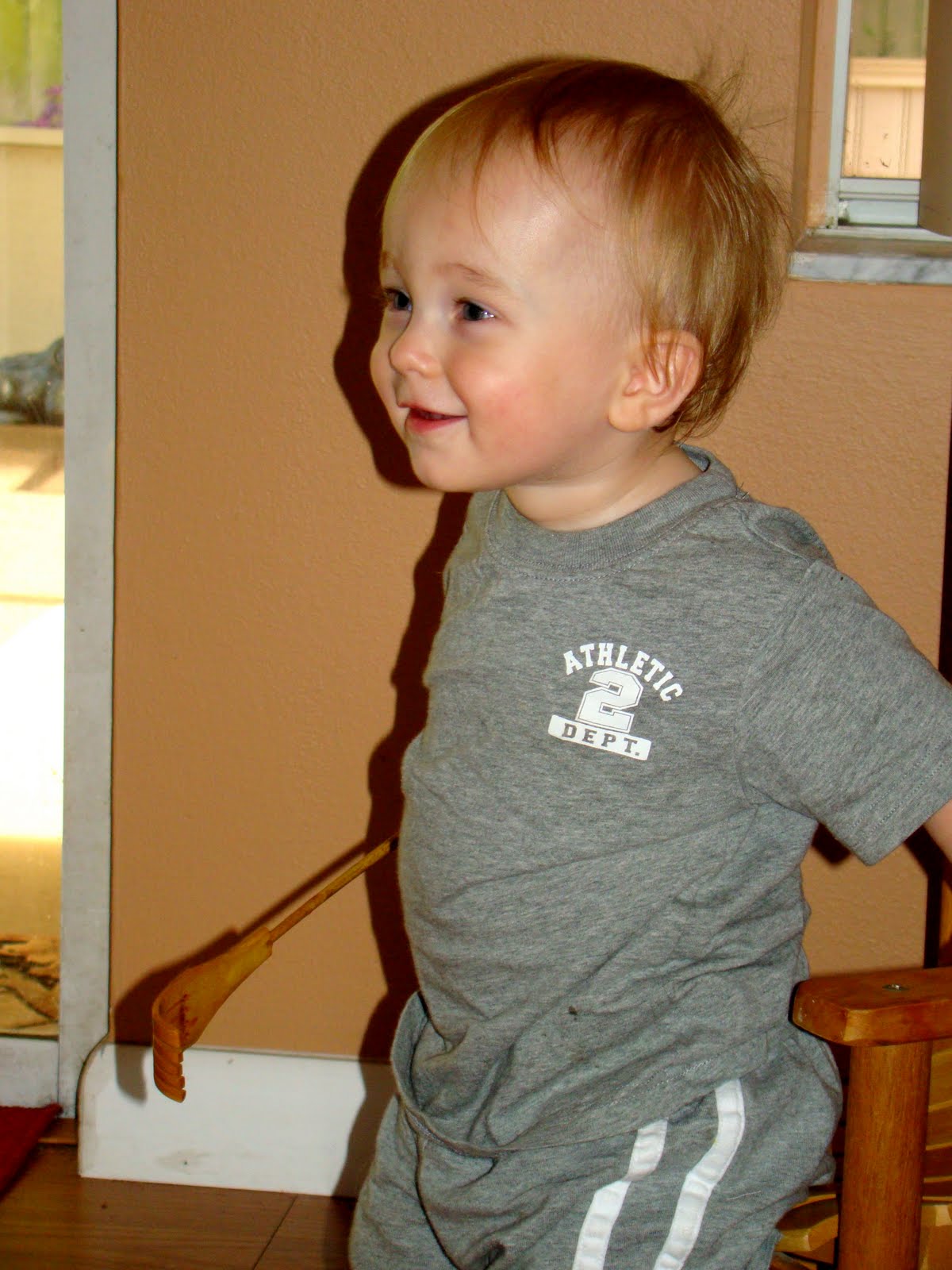 He spent most of the weekend just having a BLAST walking and walking and walking. Daddy took him outside to try out his skills and I guess we need to invest in some new play shoes. Right now I have him in some I got from a used kids sale and the bottom of them is wearing off so he got his first official scraped knee thanks to them!!!  He’s for sure a big boy now with a big boy boo-boo to prove it! 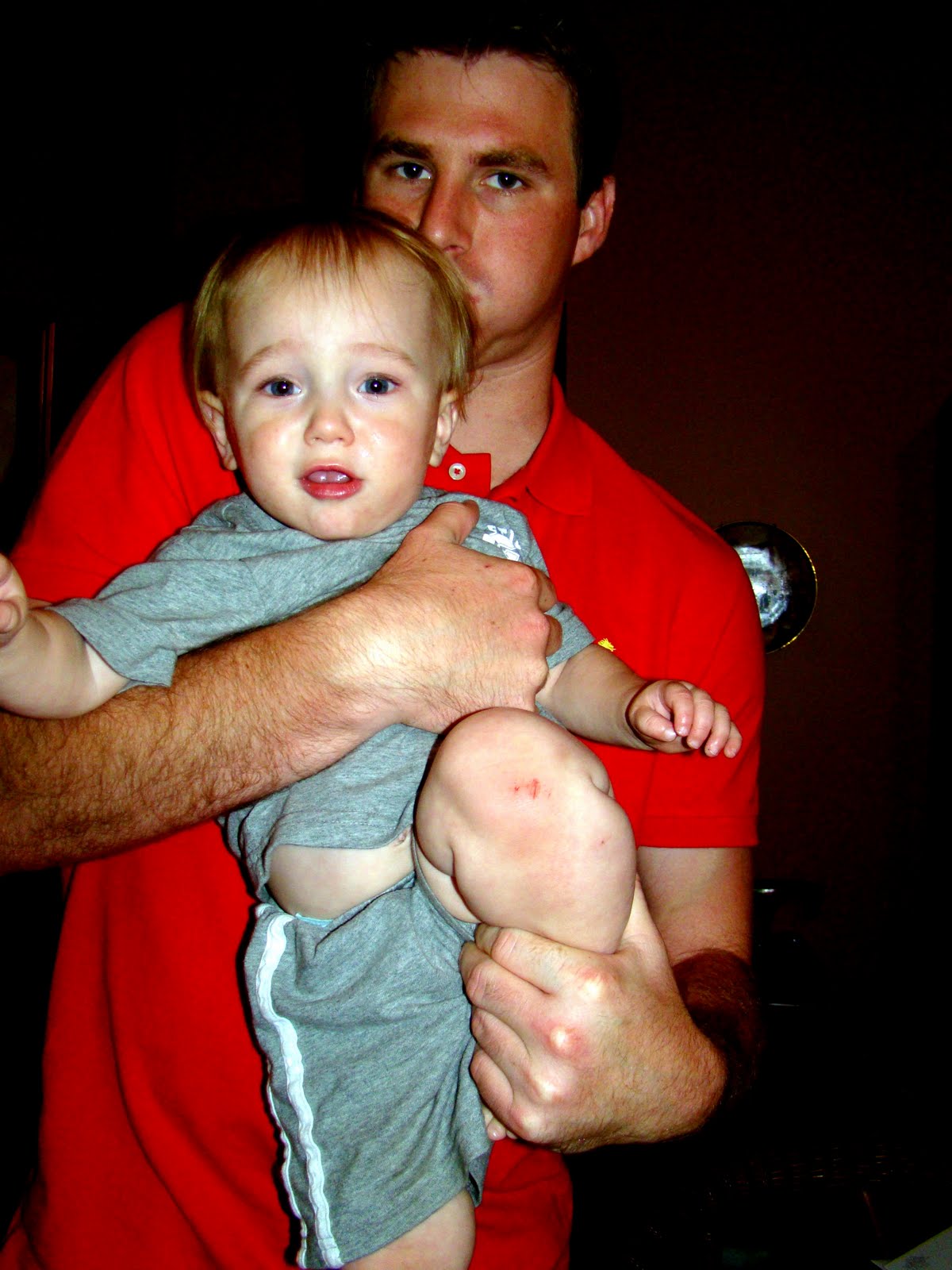 During the weekend we still had him do his roomtime in the room Mom has set up for him. She even bought him a cute new crib and he slept GREAT in it! During roomtime he played really well and I could hear him fussing a little bit over the monitor. I said to Zach that I had a feeling he was stuck in this jumper thing she has and Zach said that no, he’s sure he wasn’t stuck. So I waited a little longer and I kept hearing the fussing and kept thinking he was stuck. I finally got up (we were semi-napping) and said I had to go check on him b/c I just knew he was stuck. Zach said he was SURE he wasn’t b/c he’d be crying if he was stuck, not just fussing. When I walked in the room what did I find?!? Kye was STUCK in the jumper! He had one leg down the leg holes and one straight up in the air. I died laughing! I guess moms really do have an intuition huh?

enjoying his new crib at Gramma’s 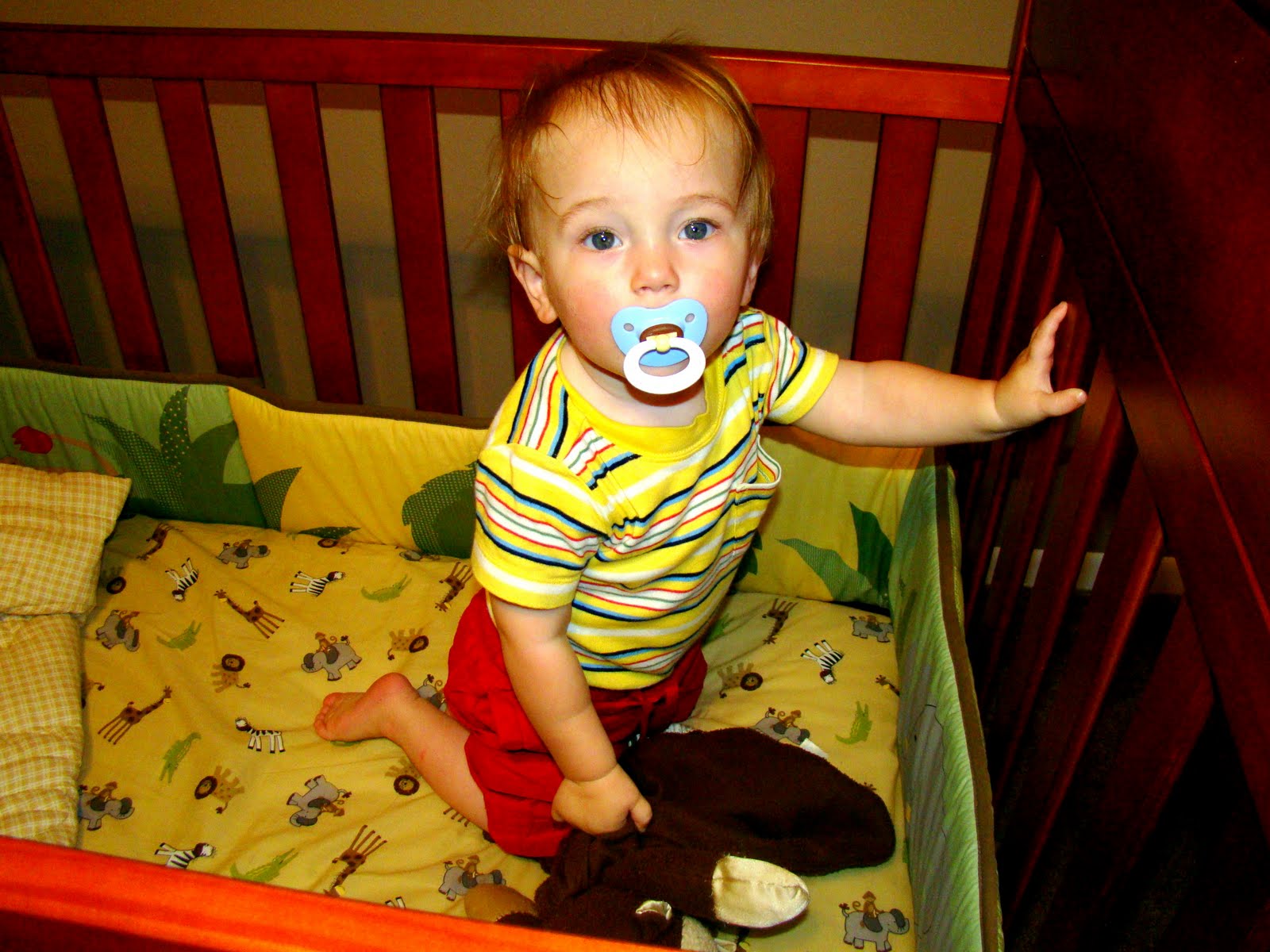 this is another time he got stuck! he loved climbing into that thing! 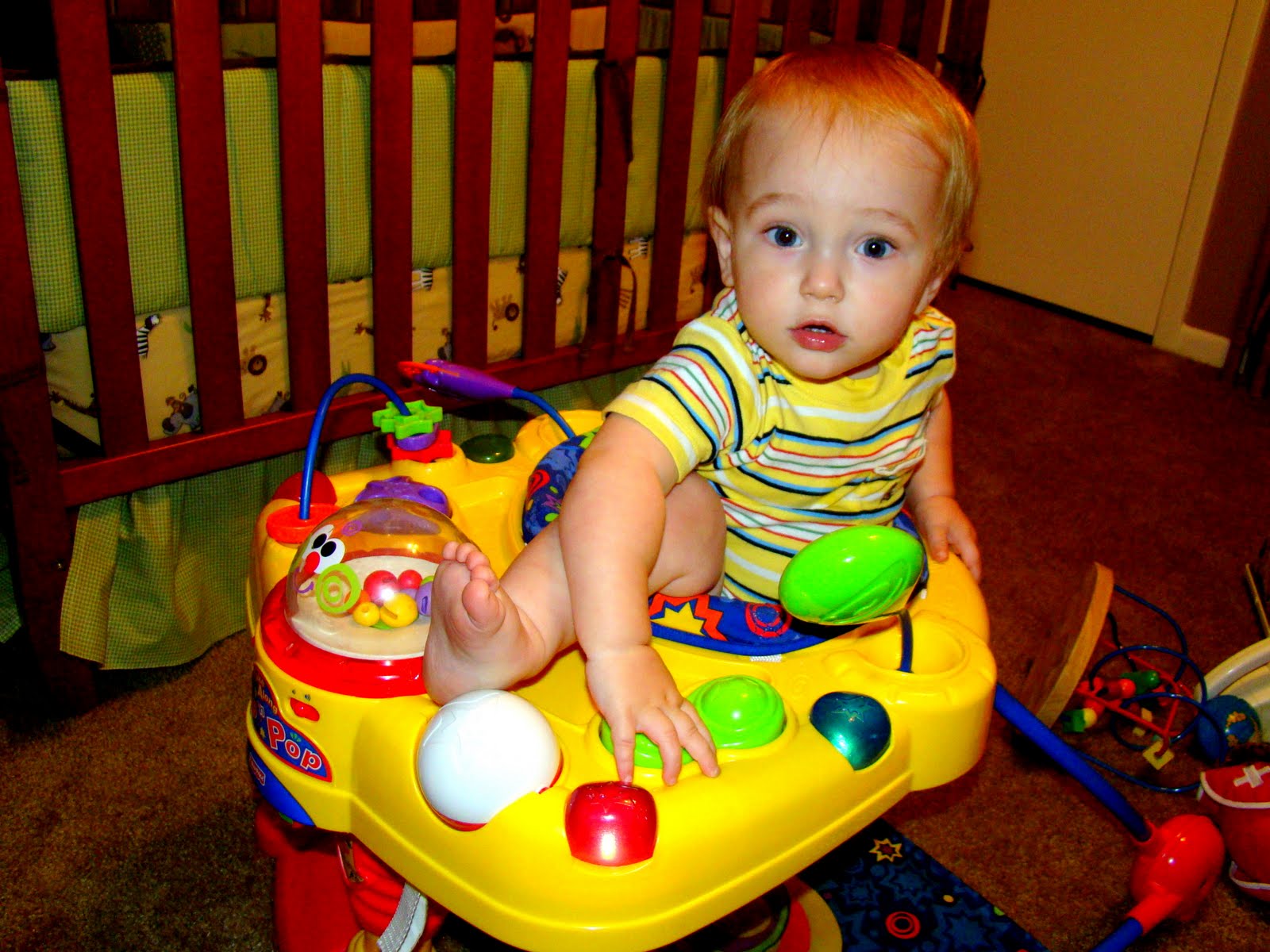 On Sunday morning we met up with my family at a little place for breakfast and Kye pigged out! Obviously this whole walking thing is burning up some calories! He drank 8 oz of milk, 1/2 a tortilla with 2 pieces of turkey and 1 slice of cheese on it, 1 silver dollar pancake (no syrup), 2 sausage links, 1/2 a scrambled egg, 1/2 box of raisins, and drank a bunch of water. He was just chowing down! After he was done he wanted to get down and walk. Zach and I can’t STAND to see kids running around restaurants so Zach took him outside and let him walk out there…looks like eating out may become more interesting now!

being sweet with Uncle Jeff 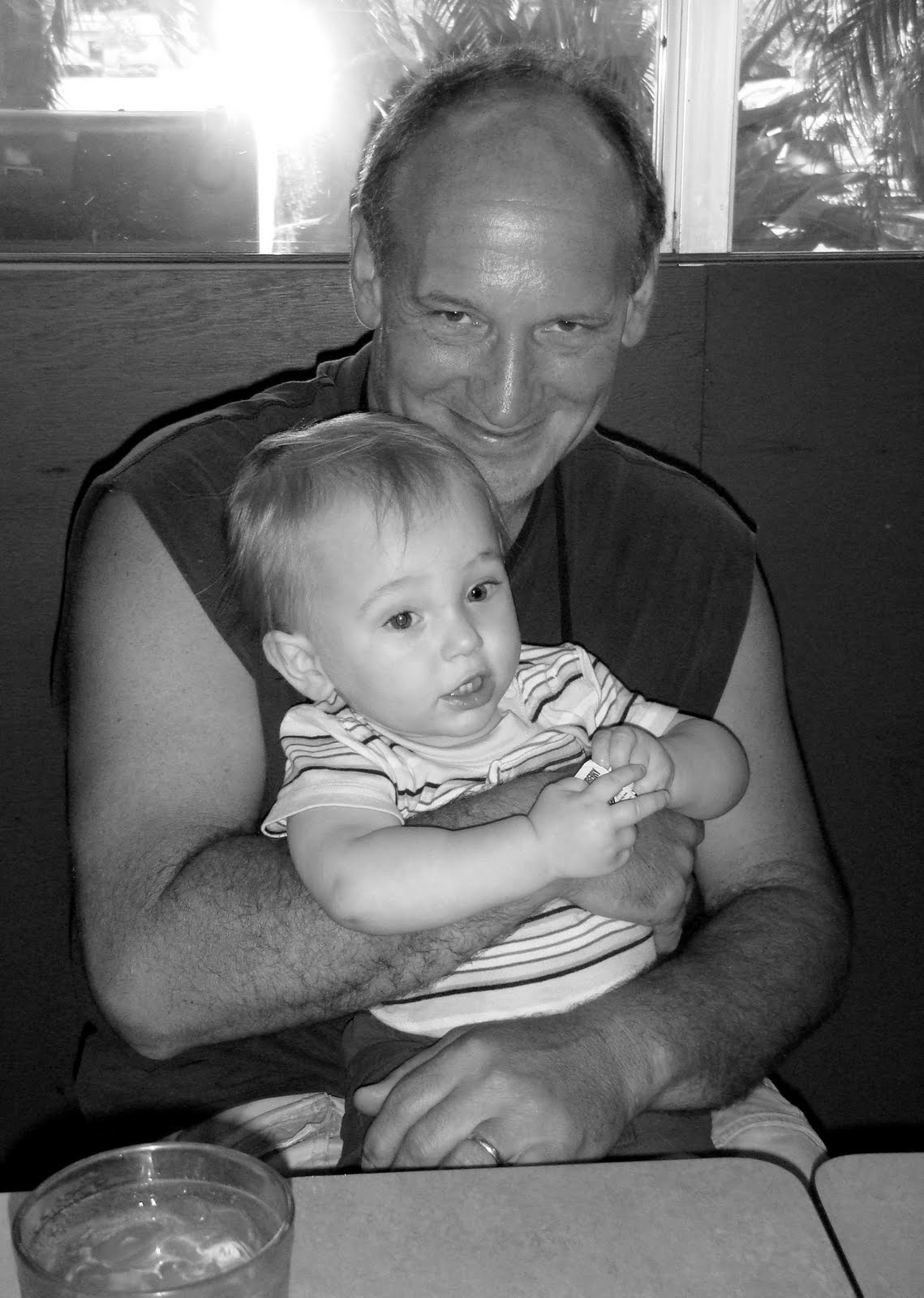 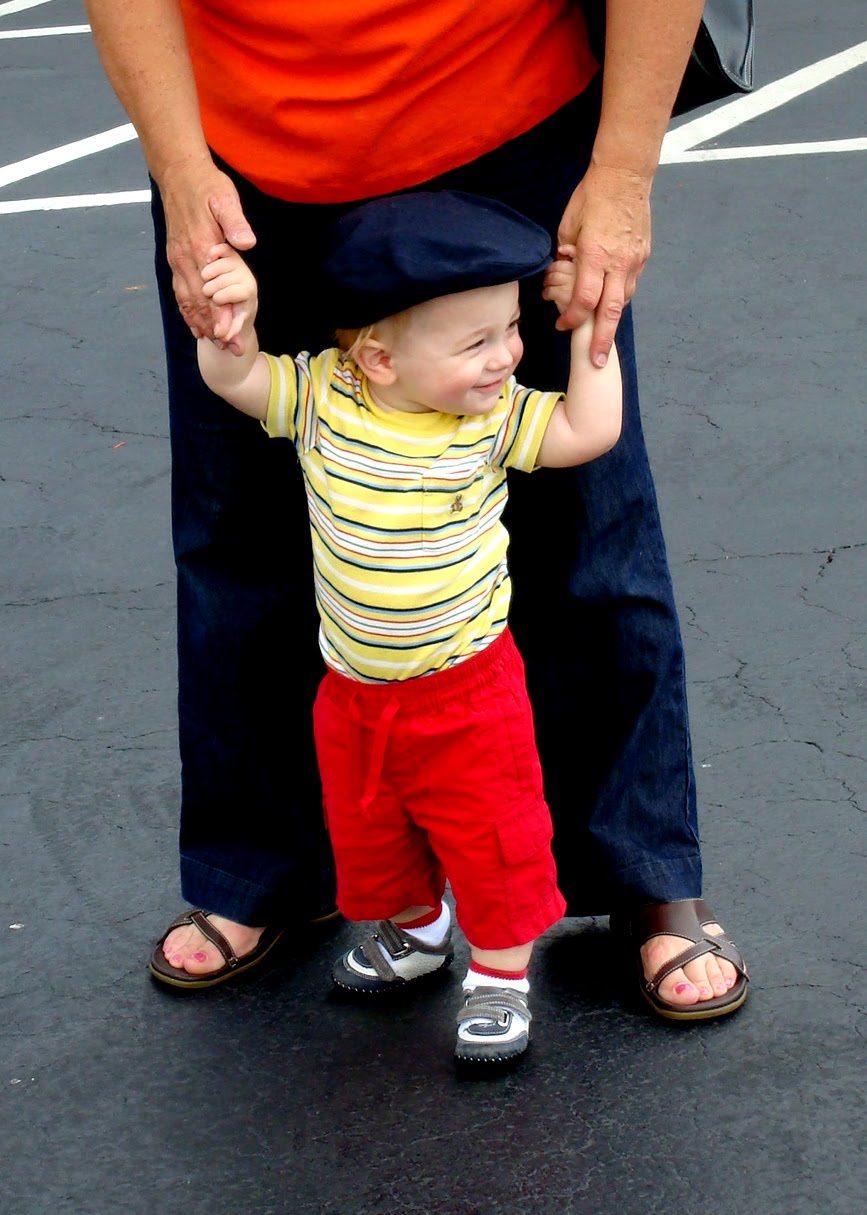 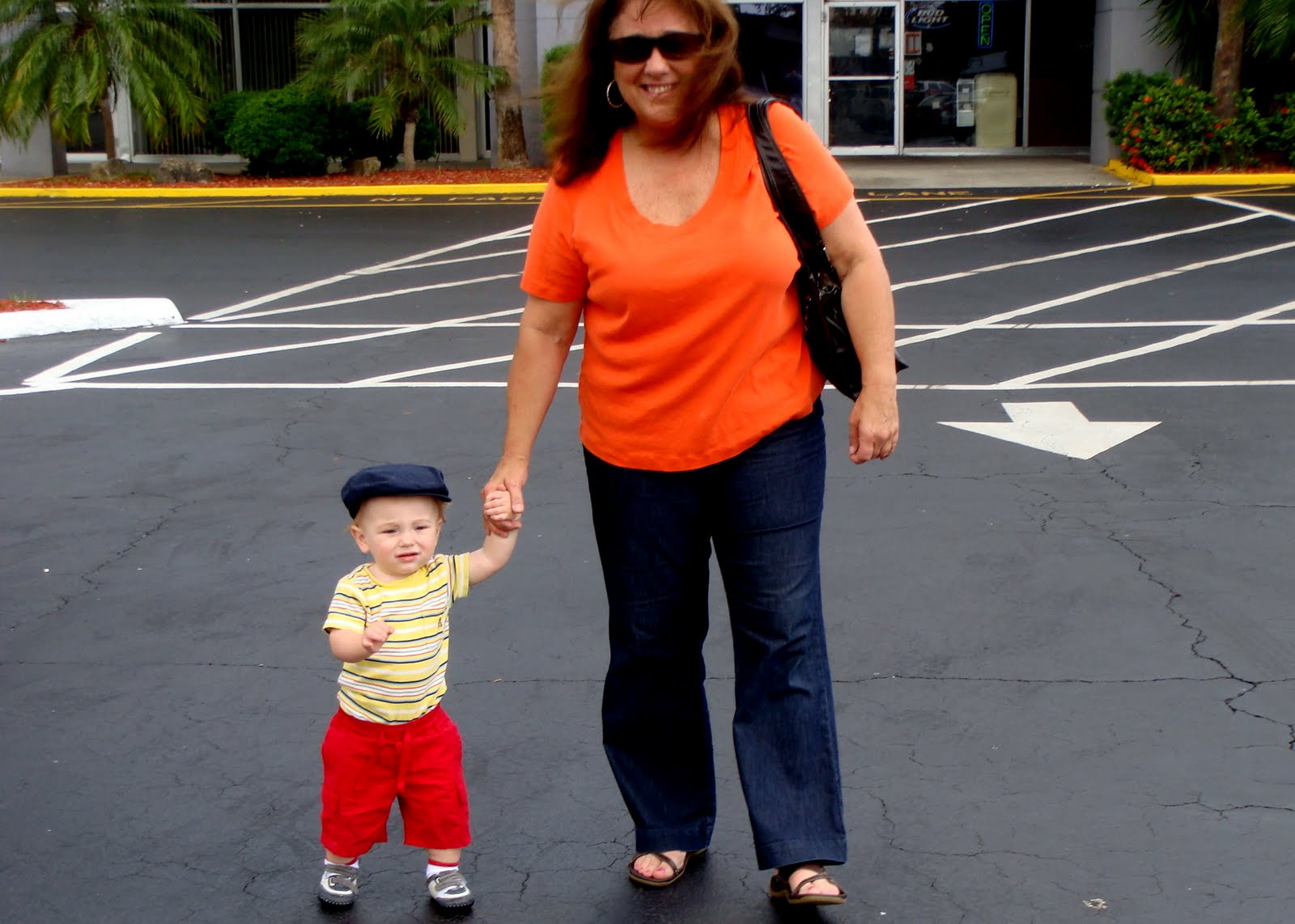 It was a really fun, relaxing weekend and I’m SO thankful for the timing of Kye’s walking. How much more perfect could that have been? It’s tough for my mom being so far away from him but it seems like things have always worked out where she’s gotten to be there for so many special firsts in his life! I’m so happy about that as I know she is too!