This morning was Kye’s 2 month well visit to Dr. Griner’s office. It was also the day I’ve been dreading…shots! We waited for a time when Zach would be able to go because I am very very afraid of needles (worst part of labor? the iv!) and I know the baby can sense that from me so I don’t want him to be afraid of them too. When I take Levi and Sadie to the vet I always leave the room so duh I’ll do the same with my child!

We gave him Tylenol about an hour before his appointment because it’s supposed to help. Of course the box said “ask dr.” for the dosage so I googled it and we gave him 0.4 ml which ends up being half of what we should have given him based on his weight. Poor thing!

He was cuddled up to Daddy before the nurses came in (of course the appointment fell during nap time). 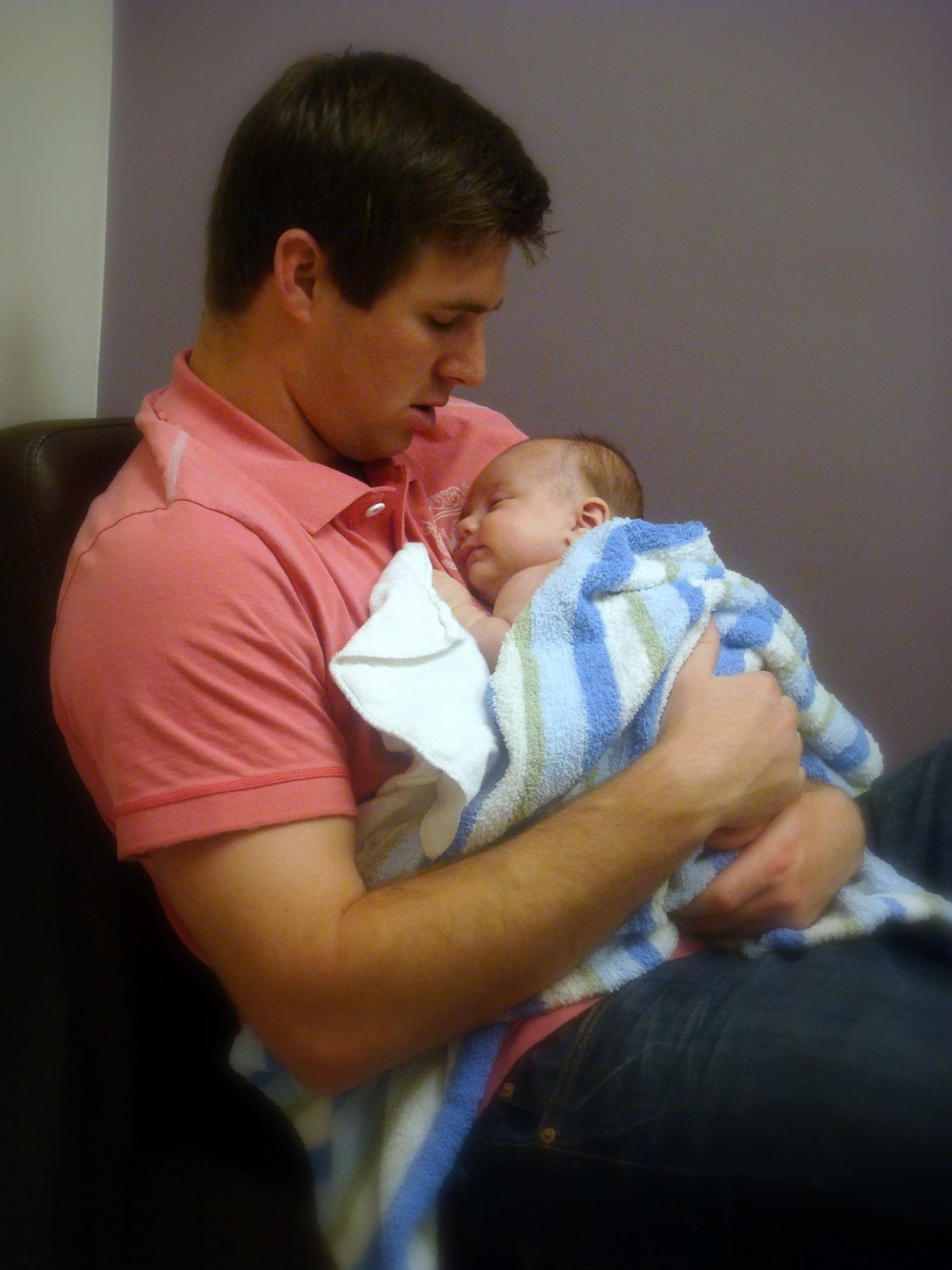 We didn’t see Dr. Griner this time, we saw Stephanie again and she’s super nice. She said with my milk situation that I may want to pump every feeding and just bottle feed. I don’t really agree with this as your body makes the milk you tell it you need to make and if I pump every feeding session won’t I just keep making the same amount of milk? I’ve been having him eat from one breast only then from the other one the next feeding and I think it’s helping. He’s spitting up less and when I do my pump session (I have one a day scheduled to keep saving milk) I only get 7 oz…it’s better than 10! She did say that all his “happy spitting up” is fine for him, just a pain for us!

She did say that if we think my milk has been his issues (and not GERD) that we can start by just giving him the Zantac once a day for a week and see how he does then, if he does well, we can take it away totally and his next visit they will update his chart saying he doesn’t have it.

I heard with breastfeeding that we should be giving him a Vitamin D supplement but she said that she gave it to her son and it’s a disaster because it’s super nasty and they hate it. So she recommended going on walks so he can get Vitamin D from the sun. And yes, babies still get the vitamins even if you take them out and cover their stroller 🙂

This week Kye’s been having some diarrhea which worried me a little bit, but she said it’s fine because it’s probably due to something I ate (coughFETACHEESEcough). 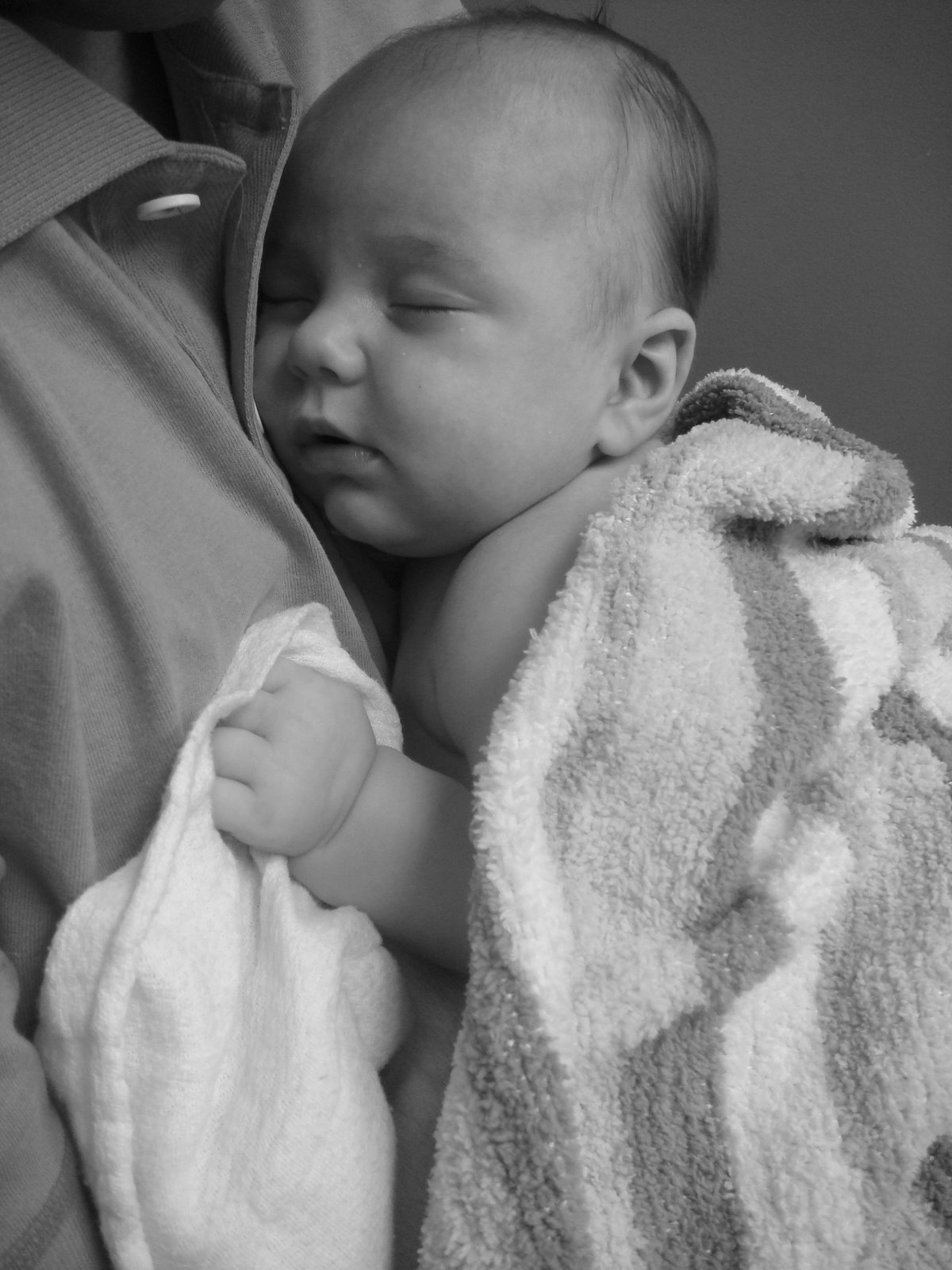 Zach has heard from a lot of people to mix rice cereal in with his bottle so he’ll sleep better at night and he wanted to ask Stephanie about it. Kye’s been sleeping through the night for a little while now but he will often wake up around 5ish fussy so she said it’s totally fine. I think Zach wants to start mixing it in a bottle for his 11:30 feeding (she said to only mix in 3 tsp per 5 oz)then Zach will give him that bottle while I pump for the missed feeding. We may try it and see how it works!

I was worried about Kye’s head becoming flat since he lays on his back so much (and I’ve kept up with Macy and her head issues). Stephanie said his head looks fine and that he should be okay to continue on his back. She also said to expect his hair to keep falling out..yuck!

I left the room for the shots and could hear him crying. I think I would have cried myself if I had been in there! He got the following immunizations: hep b (second dose, had first one at hospital when he was born), polio, pneumococcal disease, diphtheria, tetanus, pertussis, rotavirus and hib. Luckily for him that boiled down to three shots and one liquid medicine!

Zach gave him his paci RIGHT after the stuck him and he seemed so much more content. He’s been a little fussy since but nothing major and they told me to give him the 0.8ml of Tylenol every 4-6 hours for the next 24 hours as a lot of babies get fevers after their shots.

I’m proud of my little boy for being tough! And for myself for not losing it haha! The dr. did say that he could start teething at any time now so I’m sooo pumped for that! 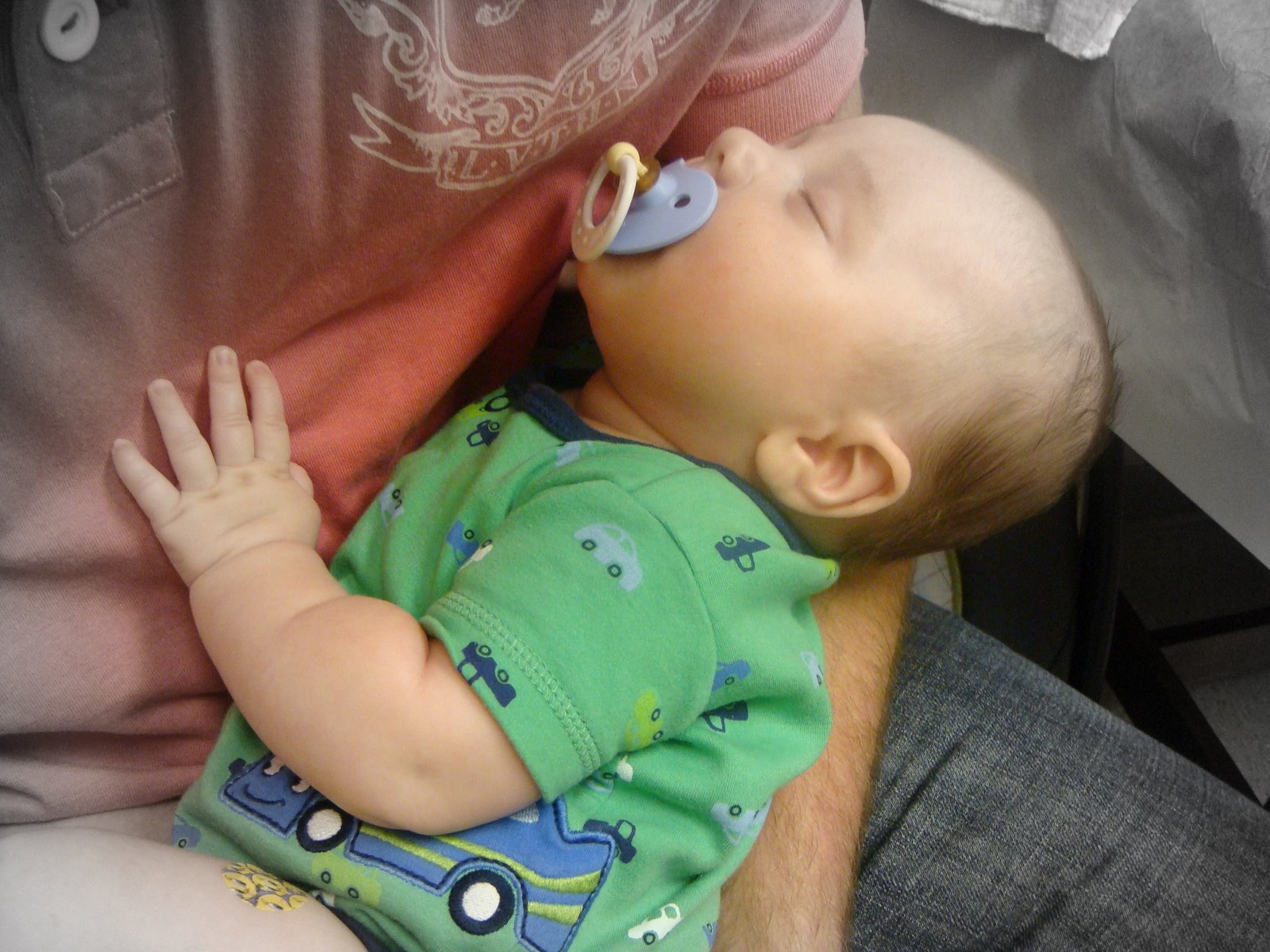