Sorry for the slack attack on the blogging. Yesterday I cleaned my house for the first time since Britt’s bday party (which was on Dec 7th). Yes, it was gross. And it wore me out! But I had to have it cleaned for the big game last night…and then today I had to sleep during naps b/c I didn’t get any sleep last night!!! Totally worth being EXHAUSTED for though: GO NOLES 🙂

A letter came home with Kye saying that his class were all going to be Indians for the play and that I needed to make him an outfit. It also suggested buying a white t-shirt and then tea staining it. Um. Tea staining? What the heck is that? Yall I STRESSED about this outfit. I googled and hunted for info on tea staining. Then I spent hours doing it and it still came out pretty much white!!! I ended up asking for help form the school and the director of the entire preschool called me about it. Embarrassing! I guess I’m one of “those moms” but seriously this little project took me straight back to when I was in school. I am a stickler for some instruction following and since the instructions on this weren’t mega clear, I freaked. I didn’t want my kid to have the worst costume, ya know? Thankfully sweet Autumn (who was Kye’s teacher a couple years ago and took all our delivery photos for Kye and Britt!) saw my distress via Facebook and offered to have me and another friend of ours come over to her house to decorate the costumes together. We let the kids go to town with them and Kye was VERY proud of how it turned out. And I was VERY thankful to Autumn for her help and her ability to help me take a chill pill about it 😉

I found out I was pregnant just a couple days before the big feast day. That very morning I had my foot appointment. So I was a bit frazzled during it all. I even had to step out for a minute before we got our food so I could make a phone call (Mrs. Charlotte thought I was calling the foot dr but I was actually answering the phone from my OB about my spotting…).

I got there and met up with Mrs. Charlotte and Casey in the parking lot. The kids came in as we were walking up and Kye was so excited to see all of us! It was adorable!!! He takes school very seriously and this little play was no different! 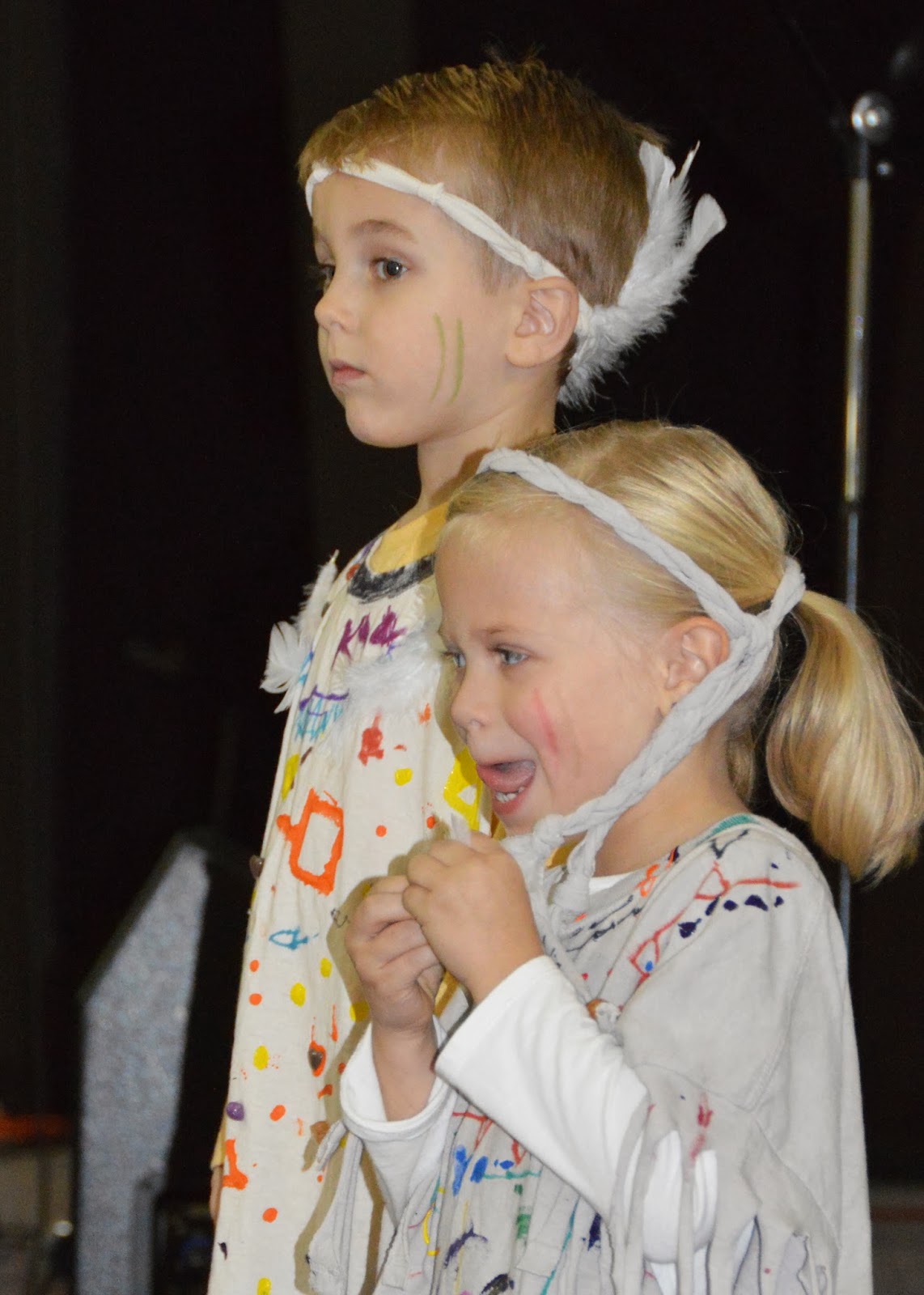 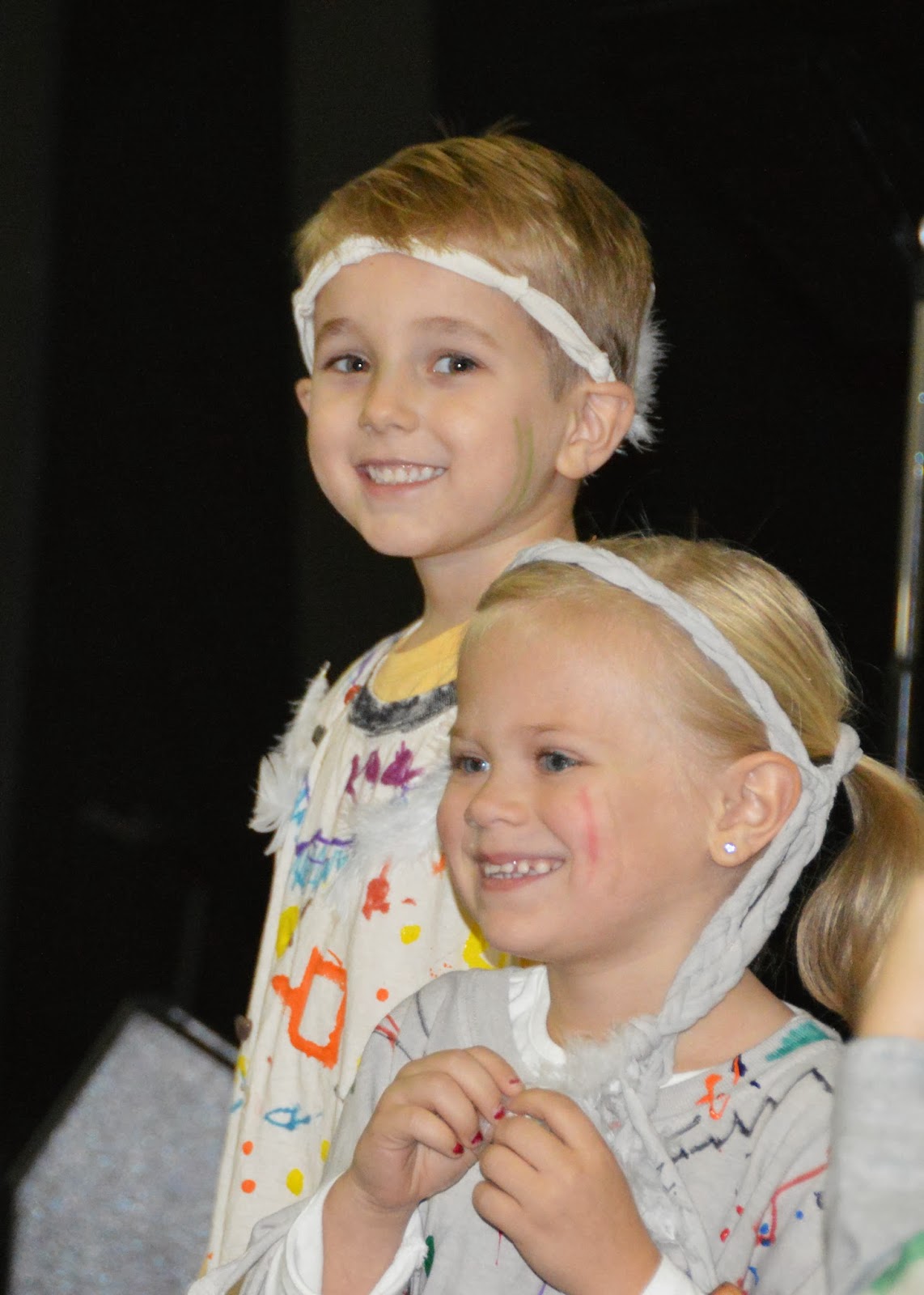 We all got a little program to keep and I thought it was hilarious that the three kids chosen to have individual speaking parts were Kye, Payton, and Kailyn! Kye wouldn’t practice with me AT ALL and I had no clue what his speaking part was going to be. I knew he had one but up until I got there that day I didn’t know if all the kids had a part (because I also knew Payton had one so I thought maybe it was everyone?) or what the situation was. 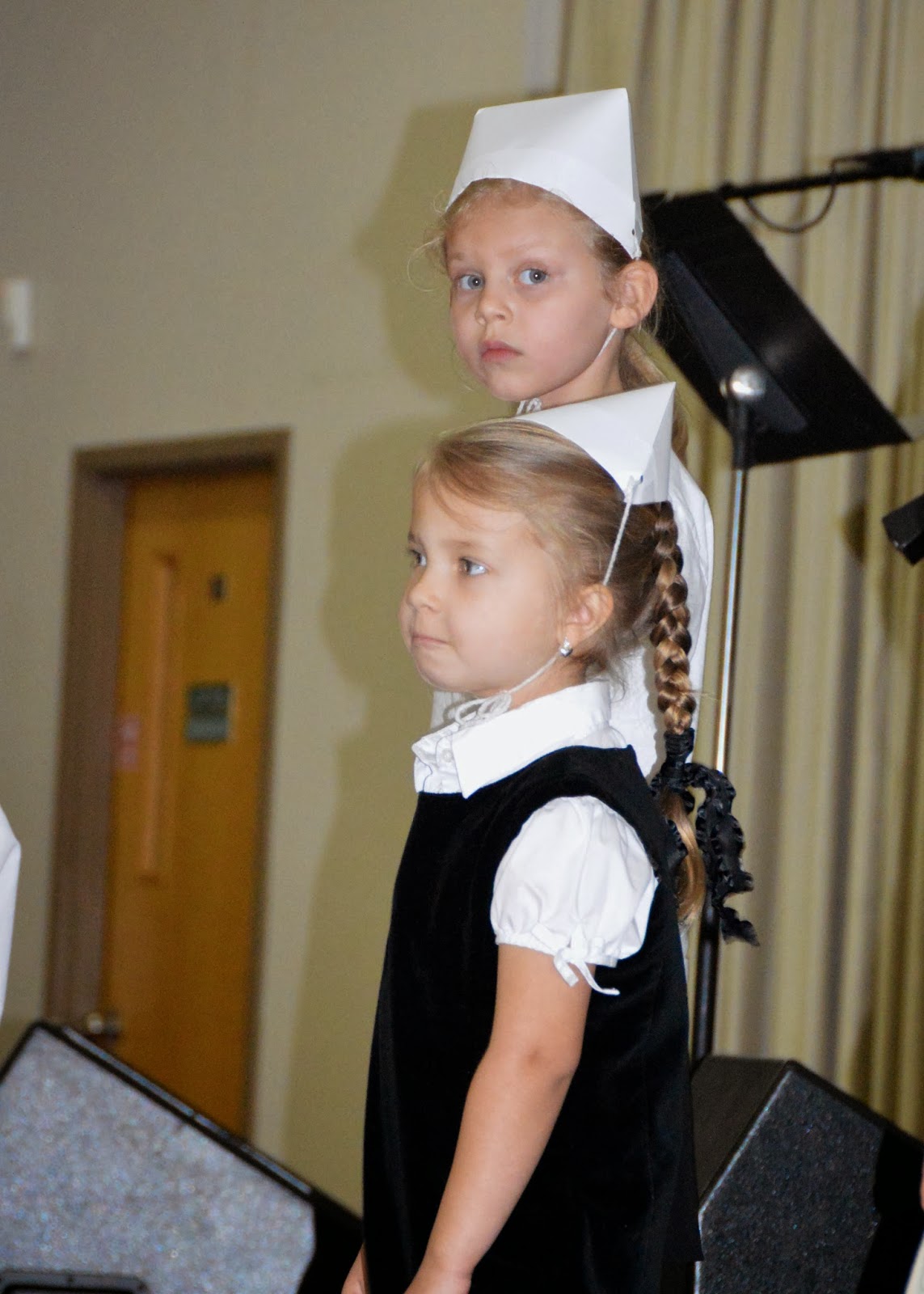 Saying the pledge (next to one of his besties…Emerson who I think is PRECIOUS!) 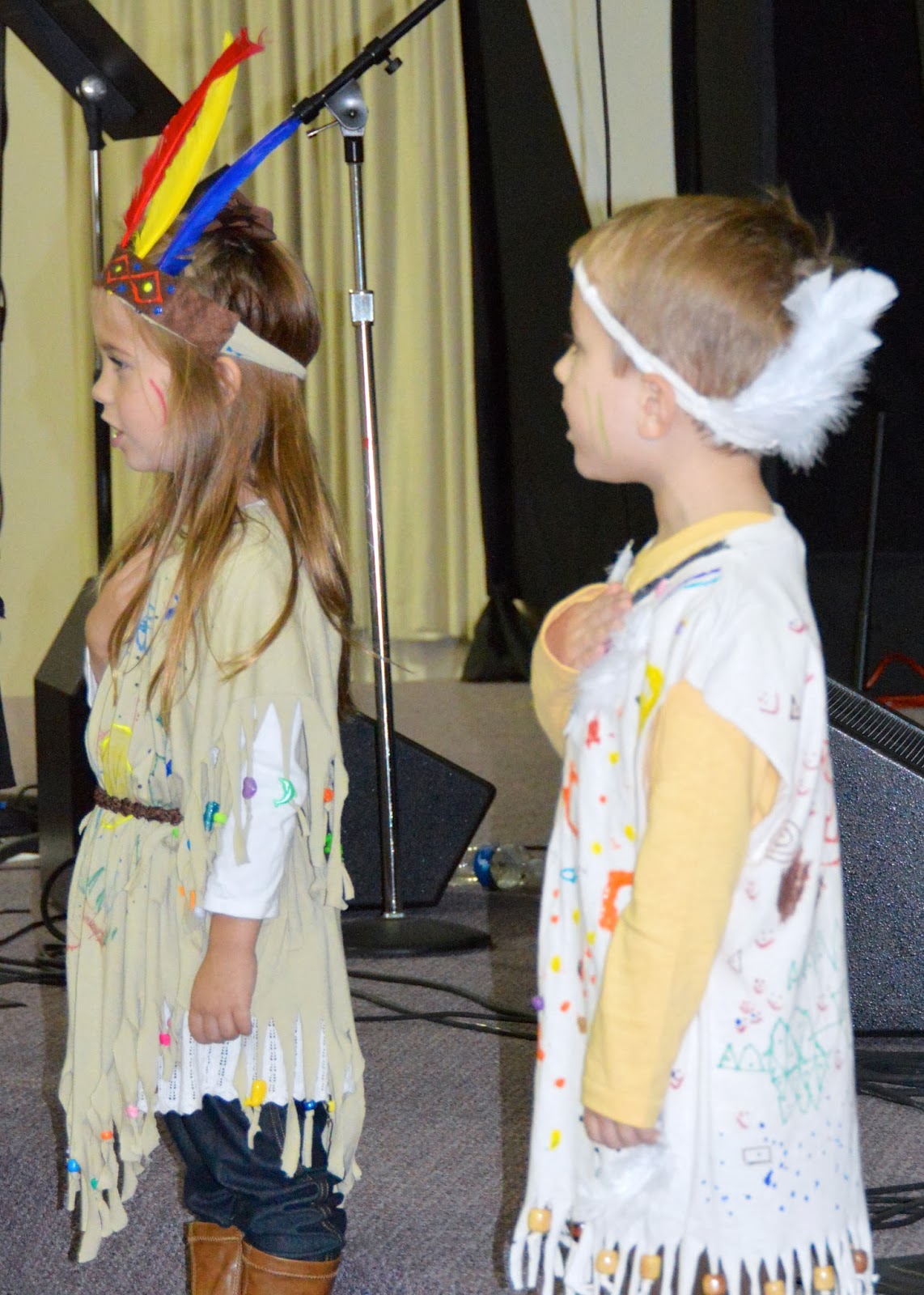 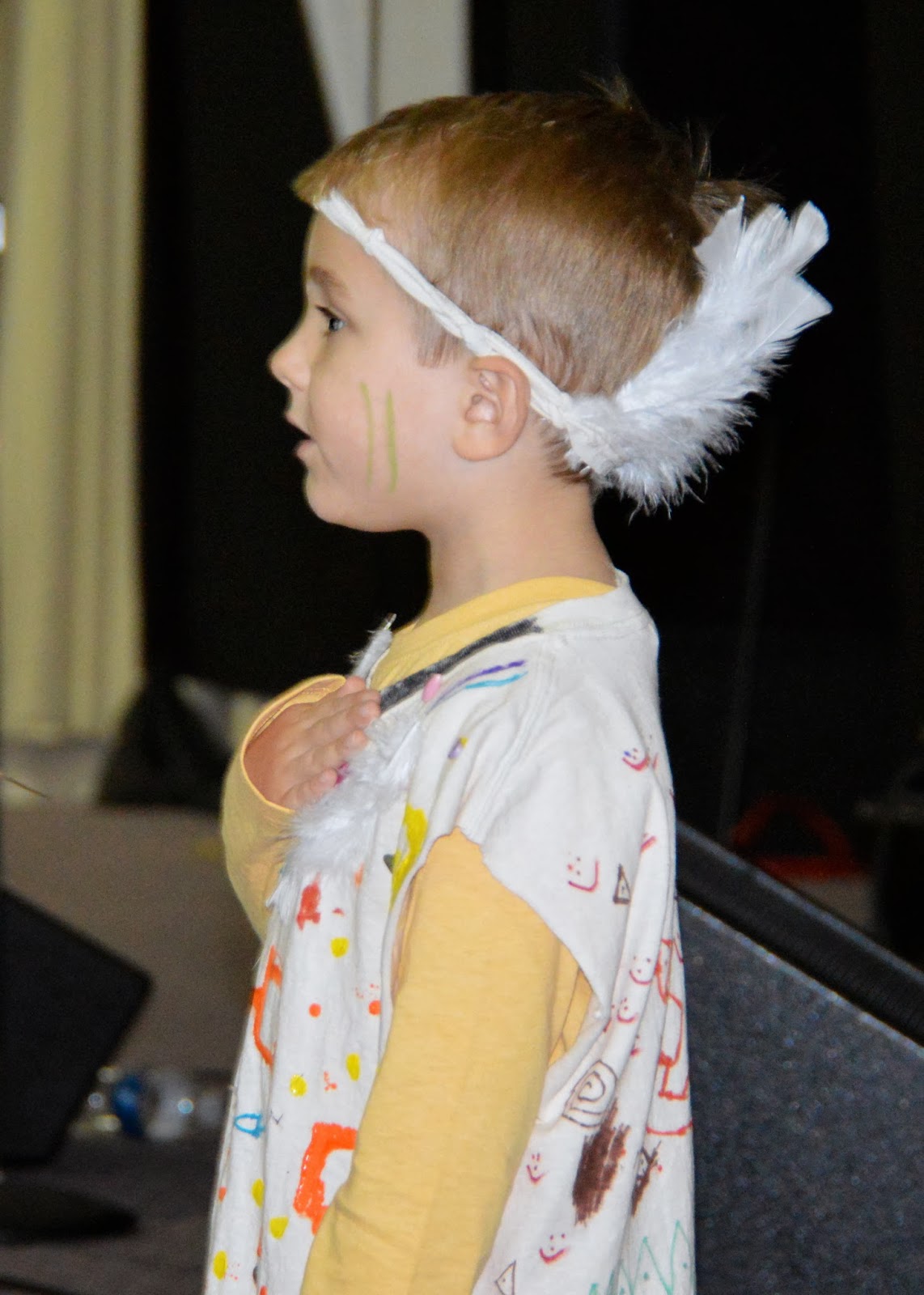 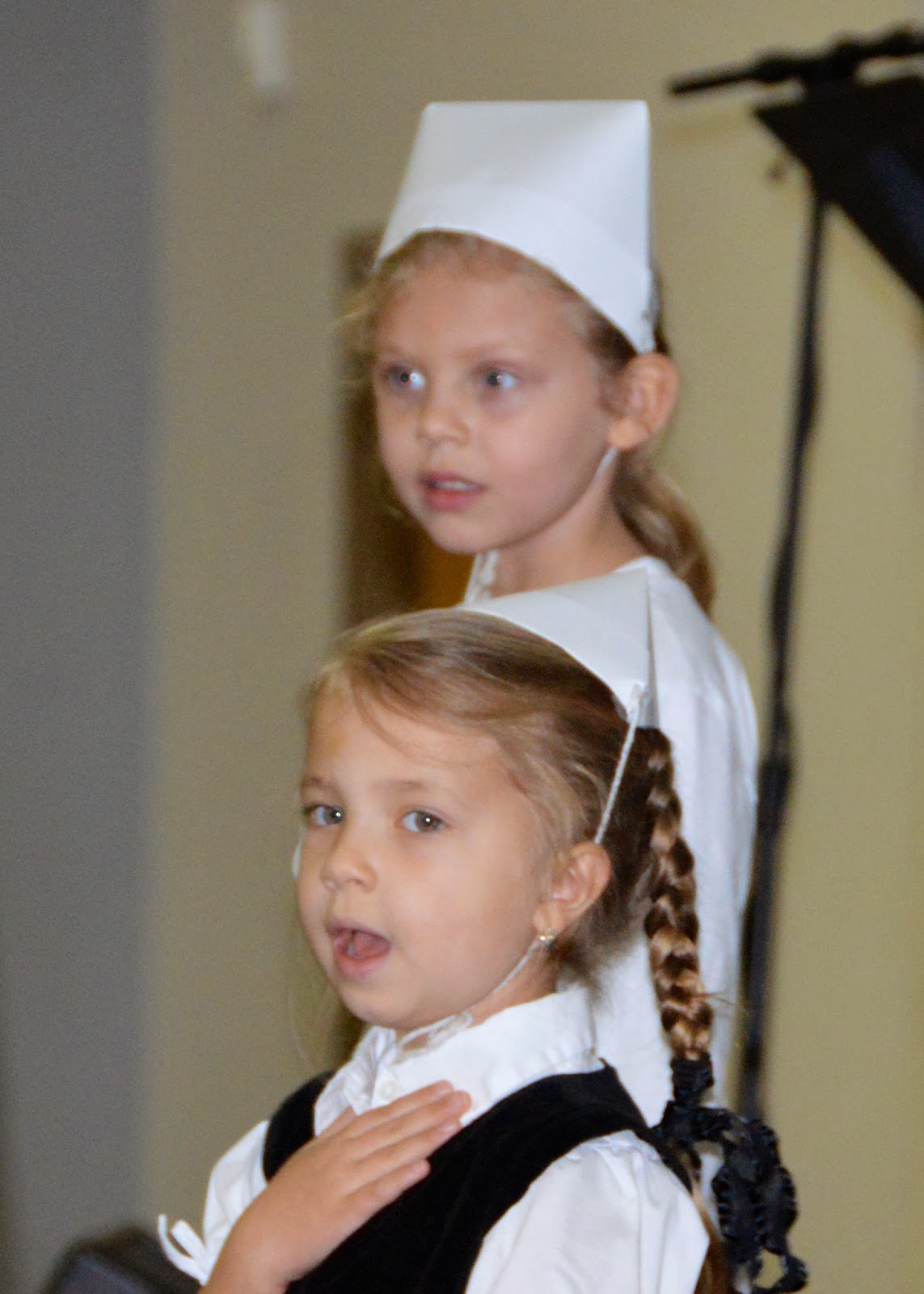 I took two videos of the stuff they did but with the new camera I didn’t know I had to focus it when recording (not used to that b/c of my old camera) so they aren’t so great of quality. But luckily my friend, Ashleigh, had also recorded it and her daughter, Adia, was standing with Kye so it worked out great!!!

My Video of all the kids speaking parts and poems

My Video of the song

Ashleigh’s video of the song

I love how LOUDLY Kye spoke his part! I also thought it was funny that he messed up and said “pilgrim” instead of “indian” and that the didn’t even realize it. So cute 🙂 Mrs. Charlotte and I were both thrown off by the song just because we don’t have any musical instruments or clapping (or arm raising) at church so hearing worship type songs with it makes us a little uncomfortable! I LOVE how you can really hear Kye though and how he was hardcore about those hand motions. So proud of my boy!!! 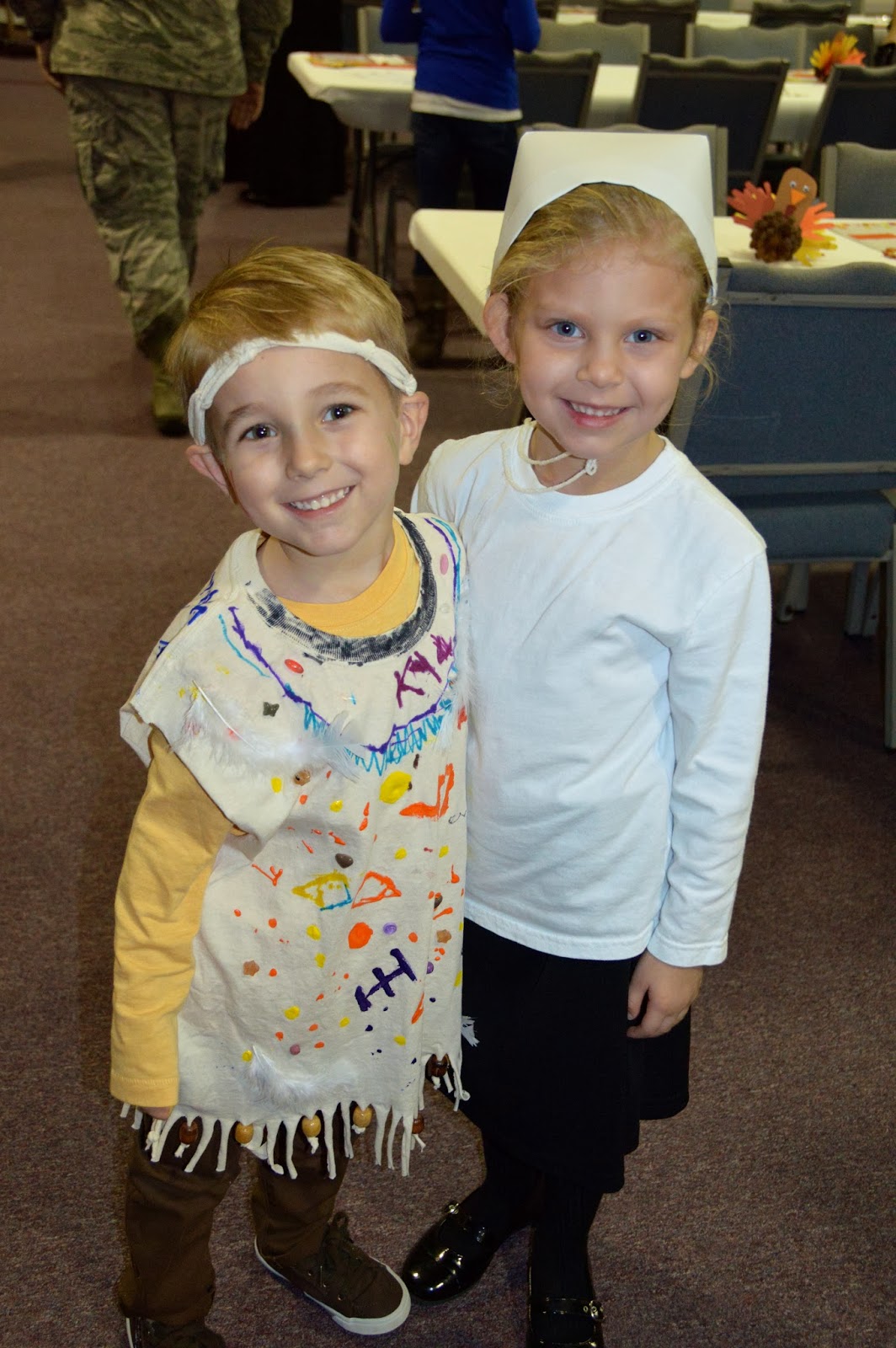 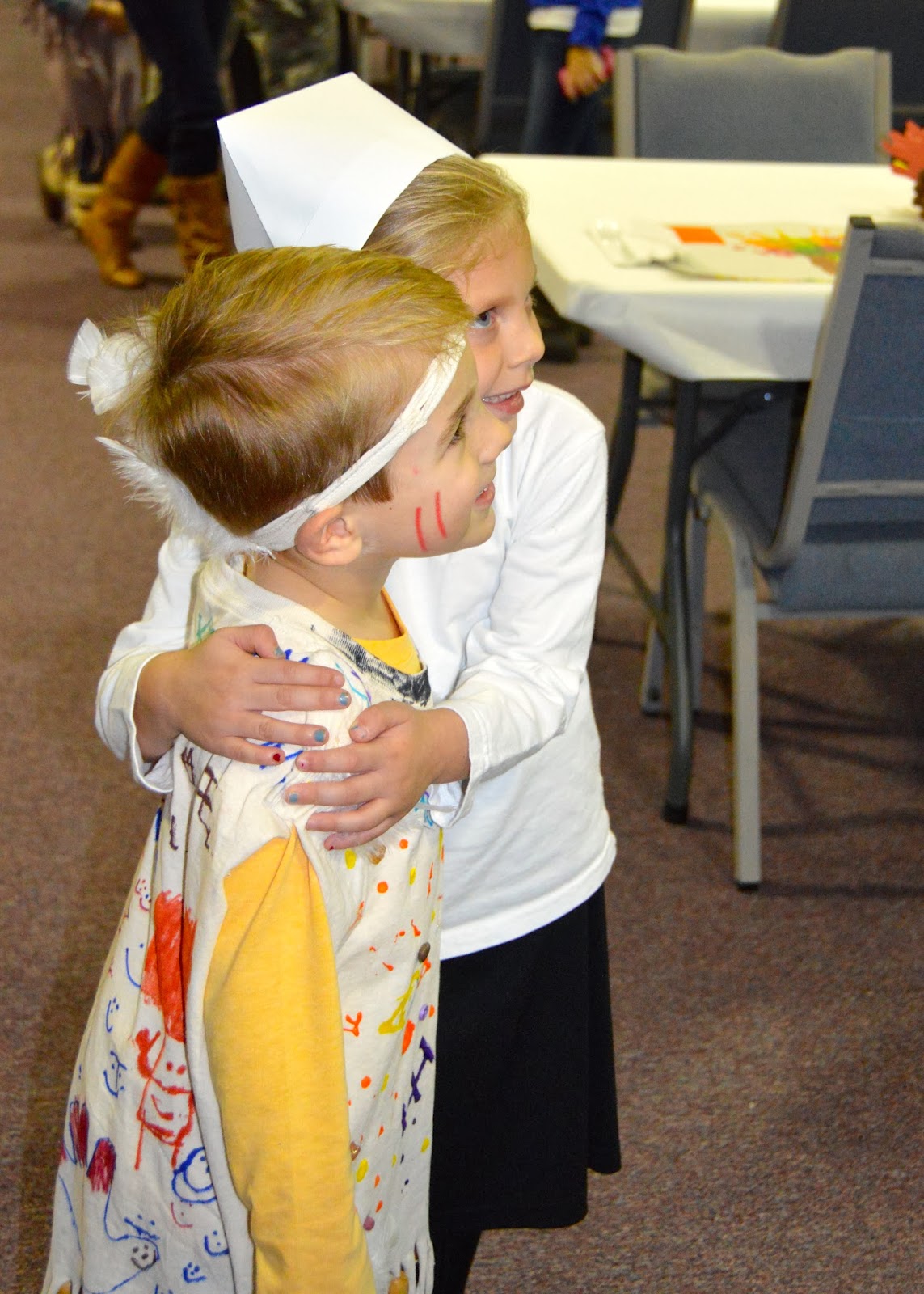 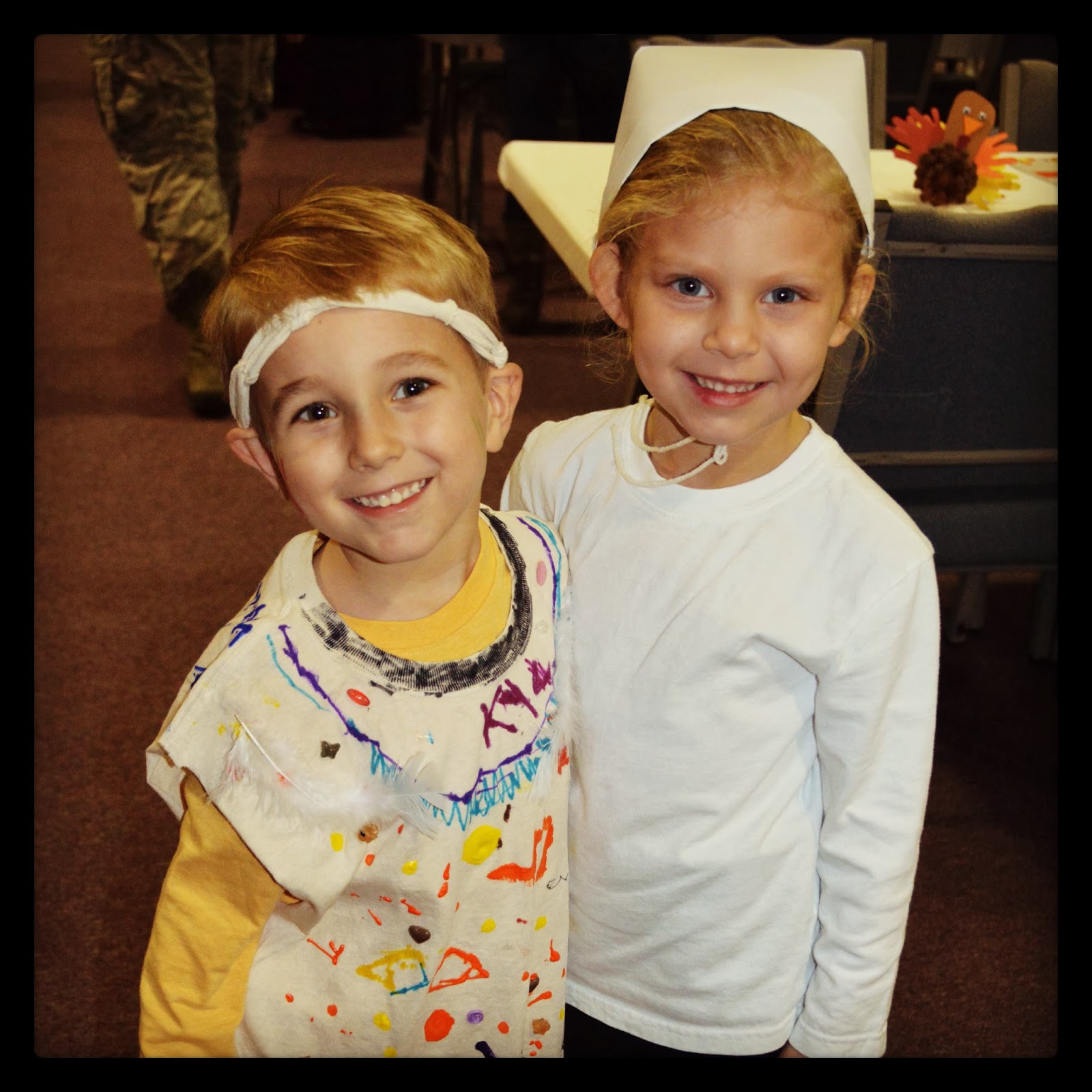 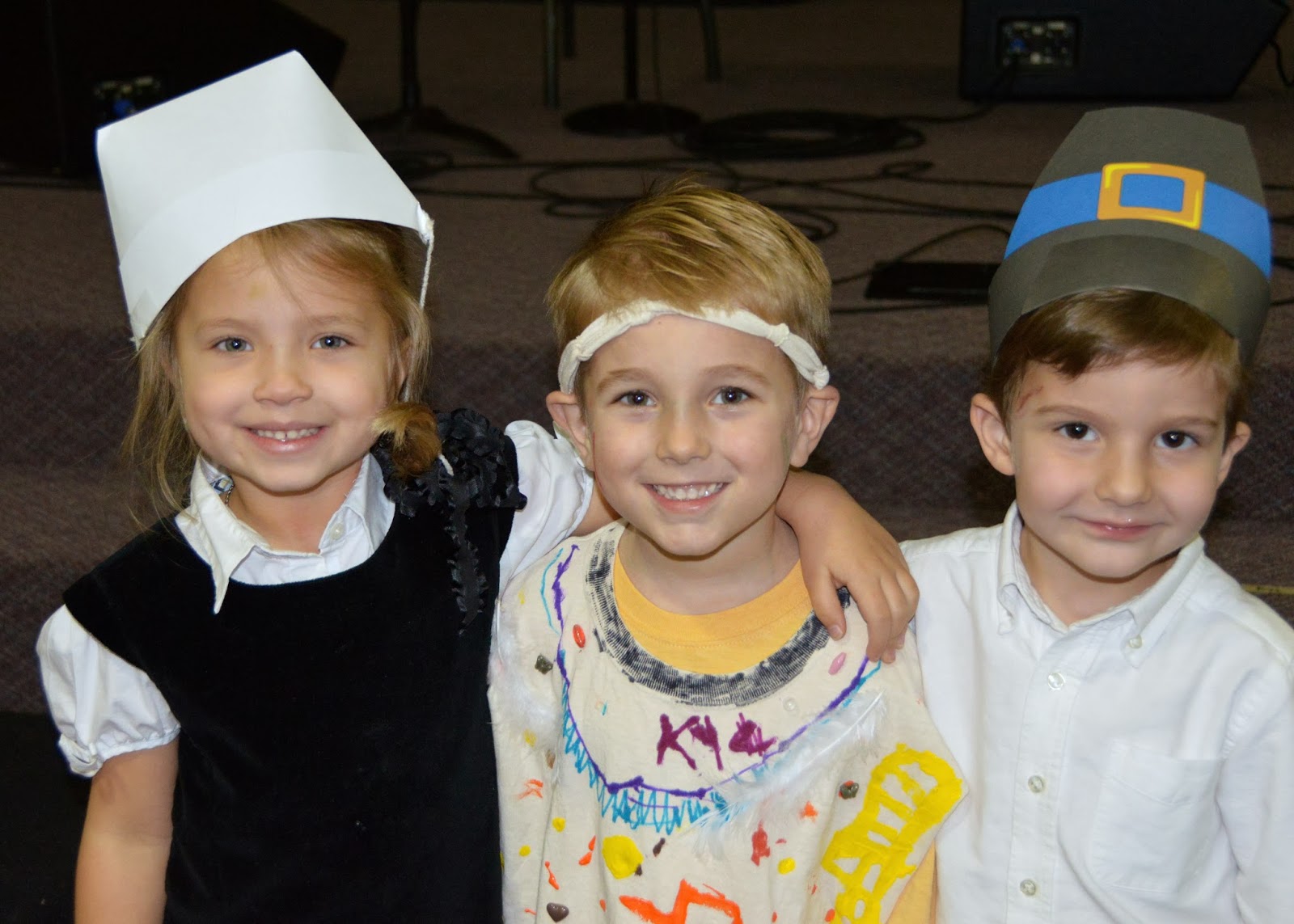 At school they have to put their name at the top of every worksheet they do…Kye takes that very literally and puts his name on top of everything. Including his indian costume 🙂 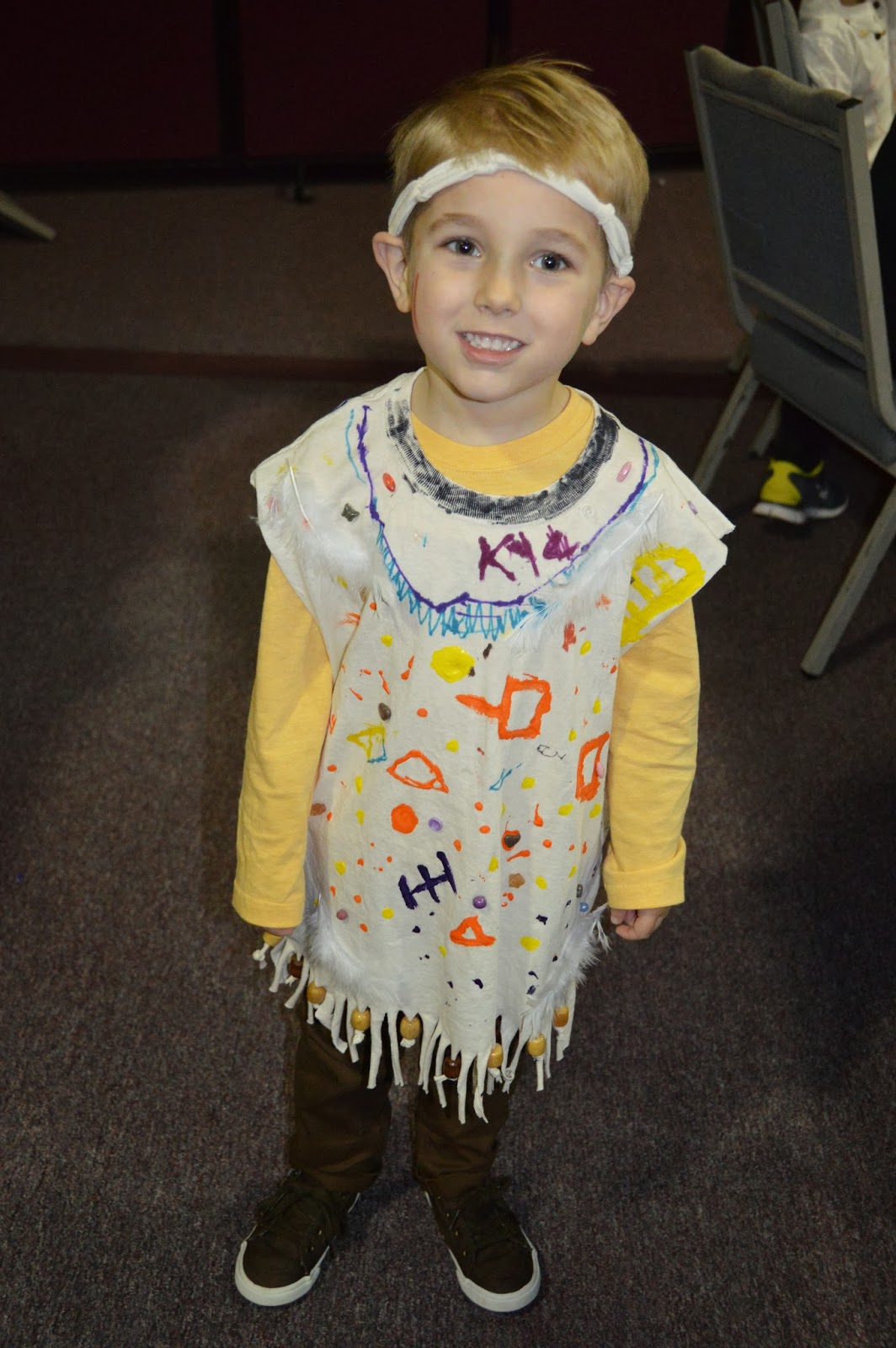 Mom Fail: headband is too low and it’s pushing on his ears haha 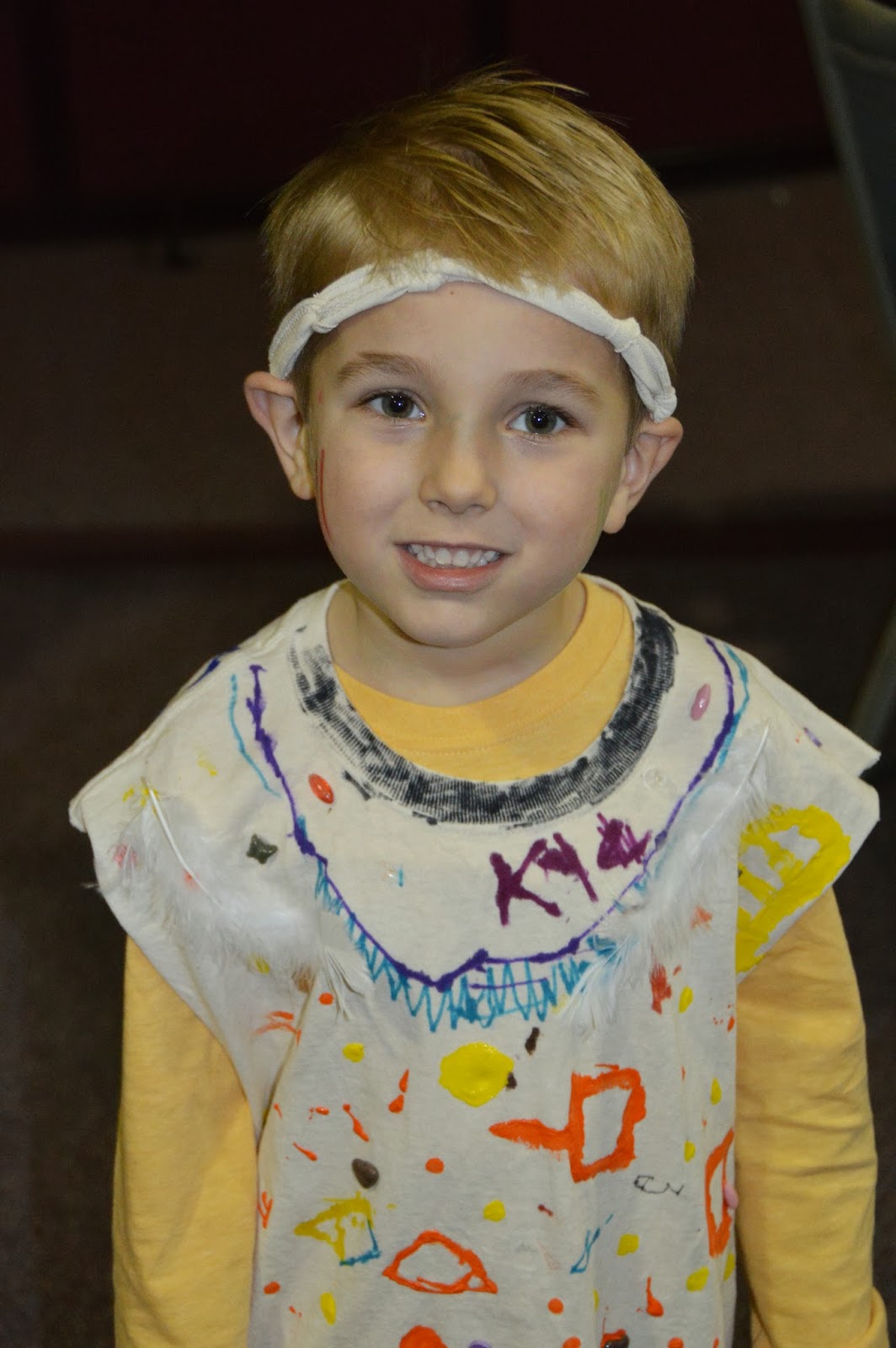 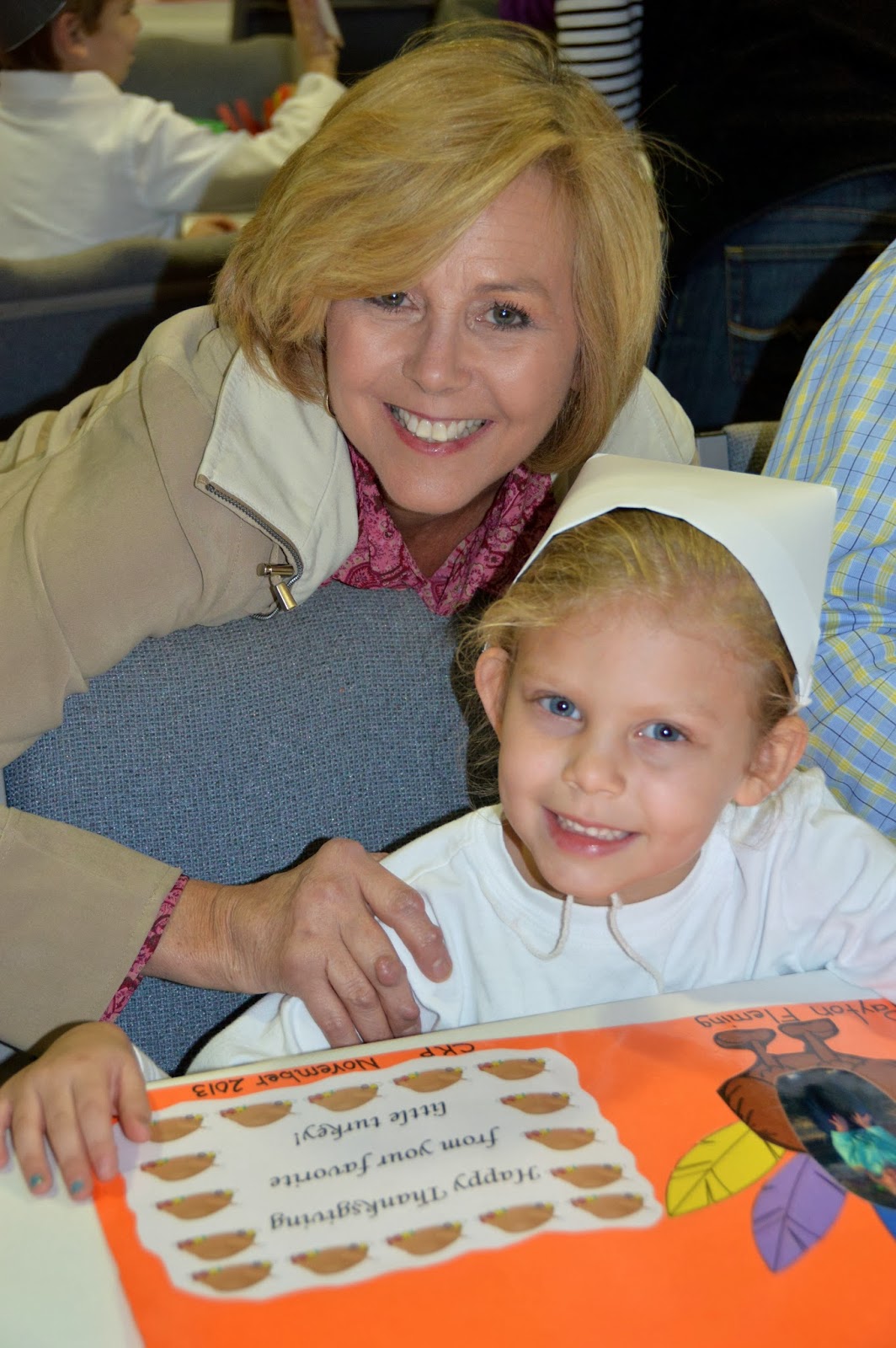 So great that Brad could be there!!! He’s recently started to work with Aflac and one of the many reasons Aflac is SUCH a great career is that the hours are so flexible!!! Payton was SO PROUD to have her Daddy there with her!!! 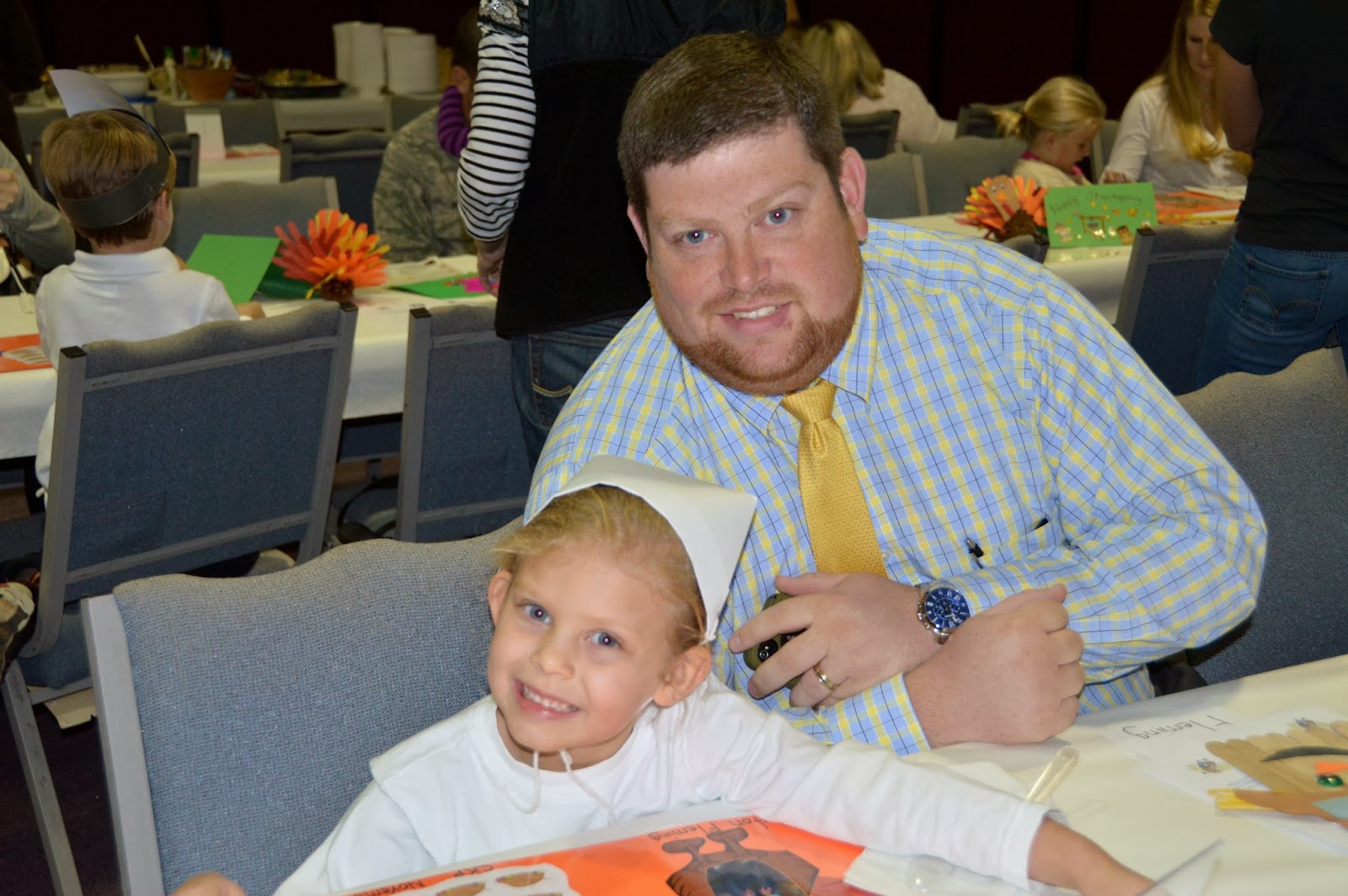 My sweet girl!!! Love me some Payton 🙂 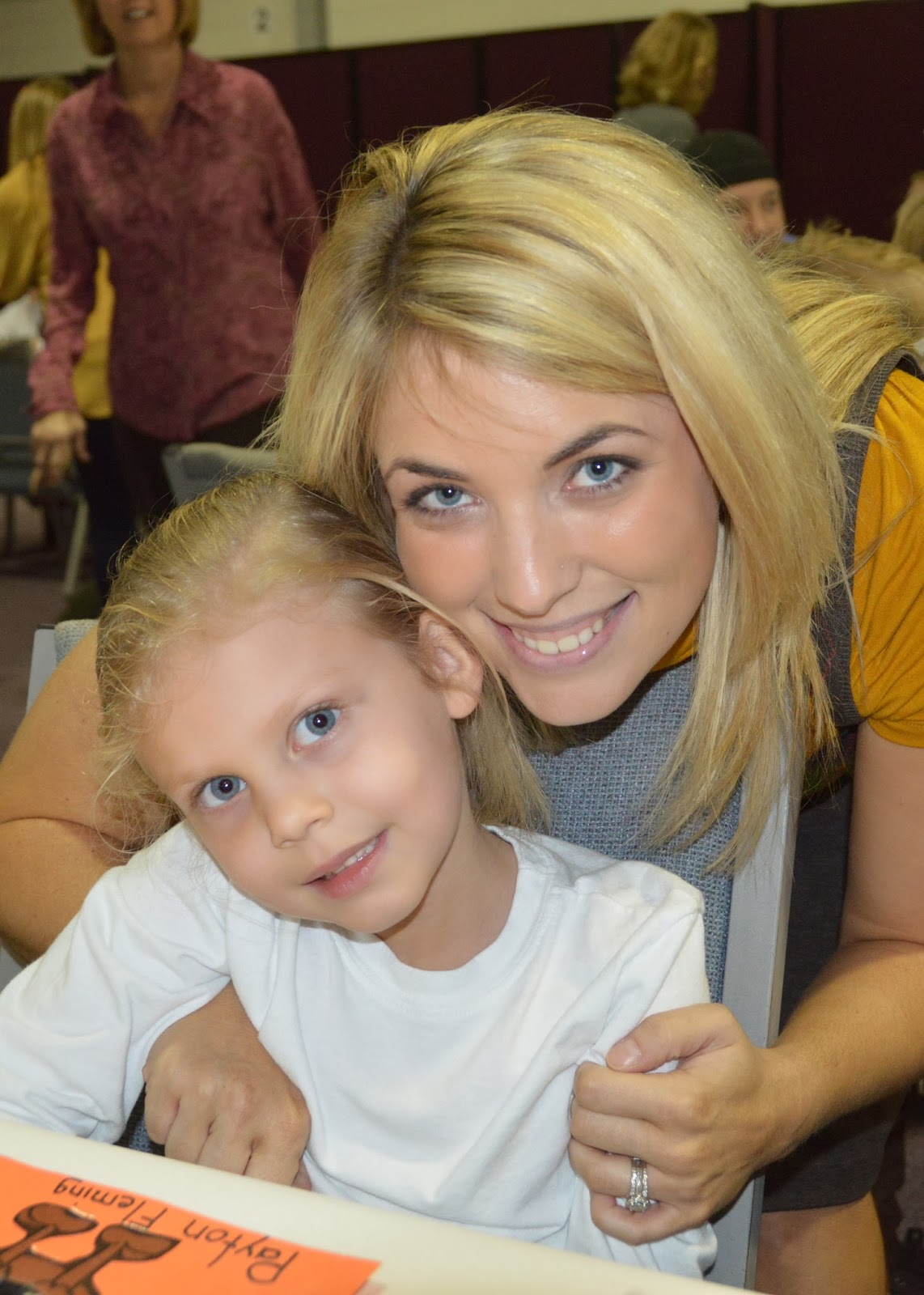 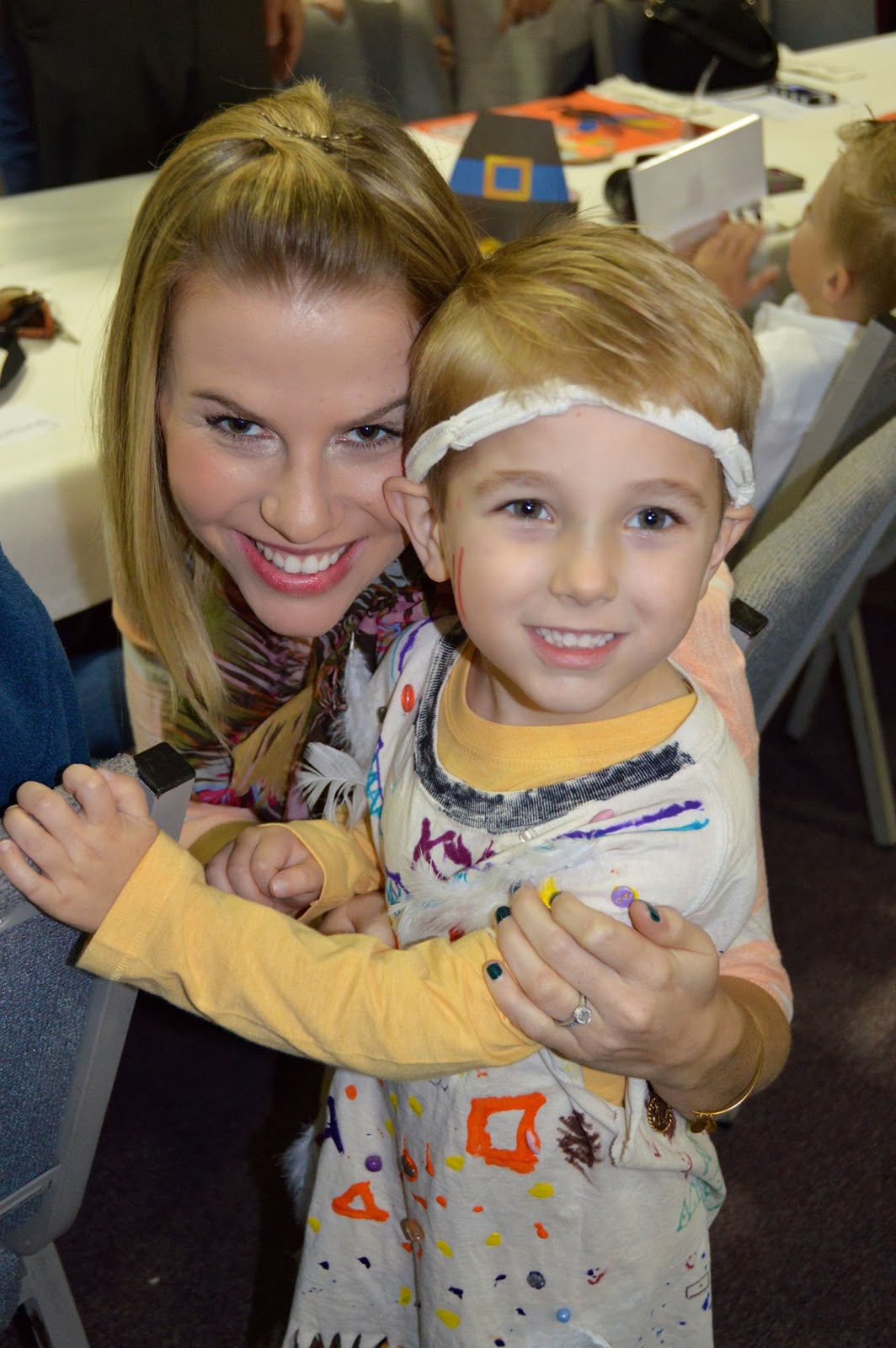 G-Mama got to come in Zach’s place since he was out of town!

(big thanks to Mema for keeping Britt!) 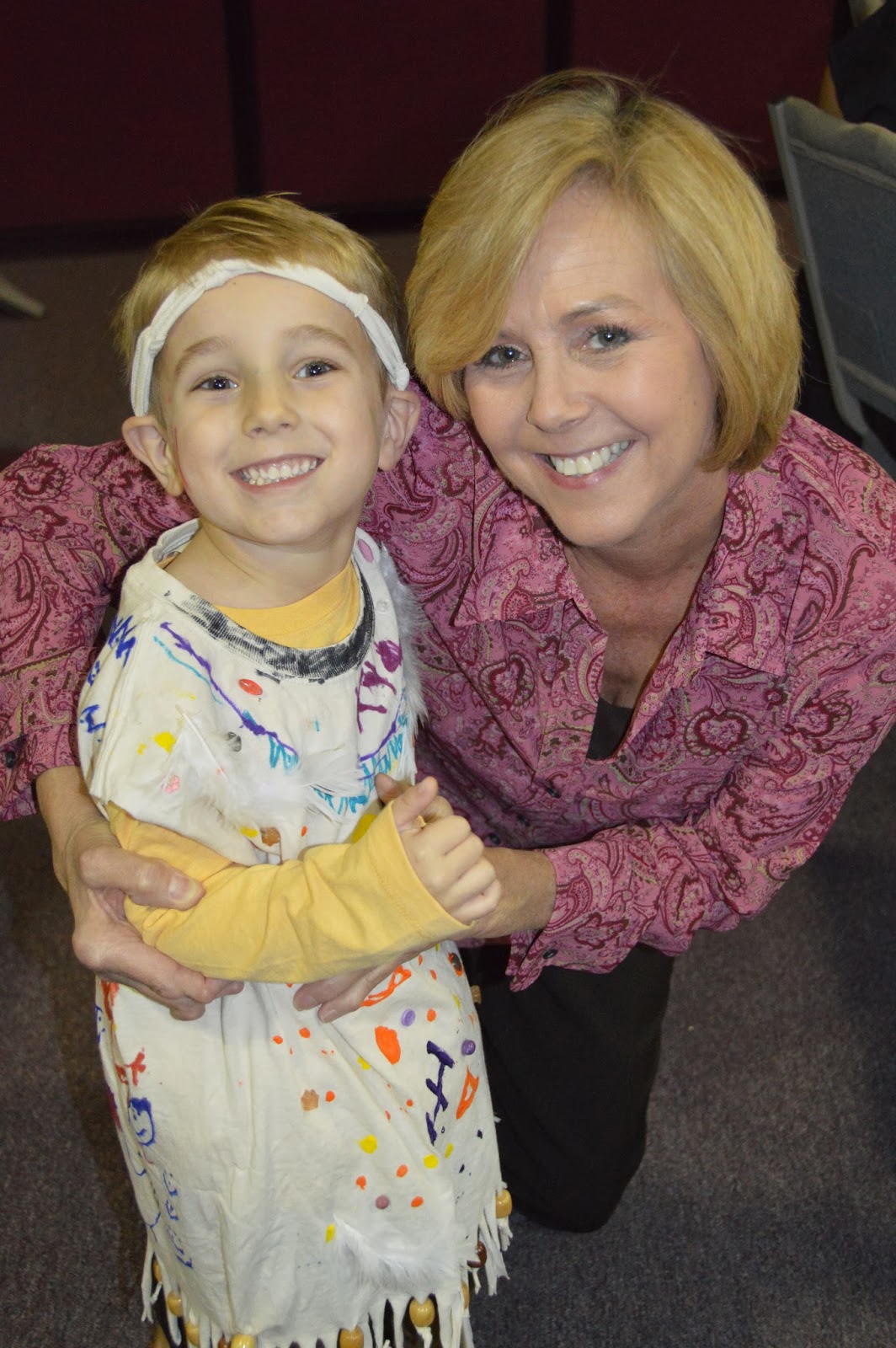 SO proud of my little indian! 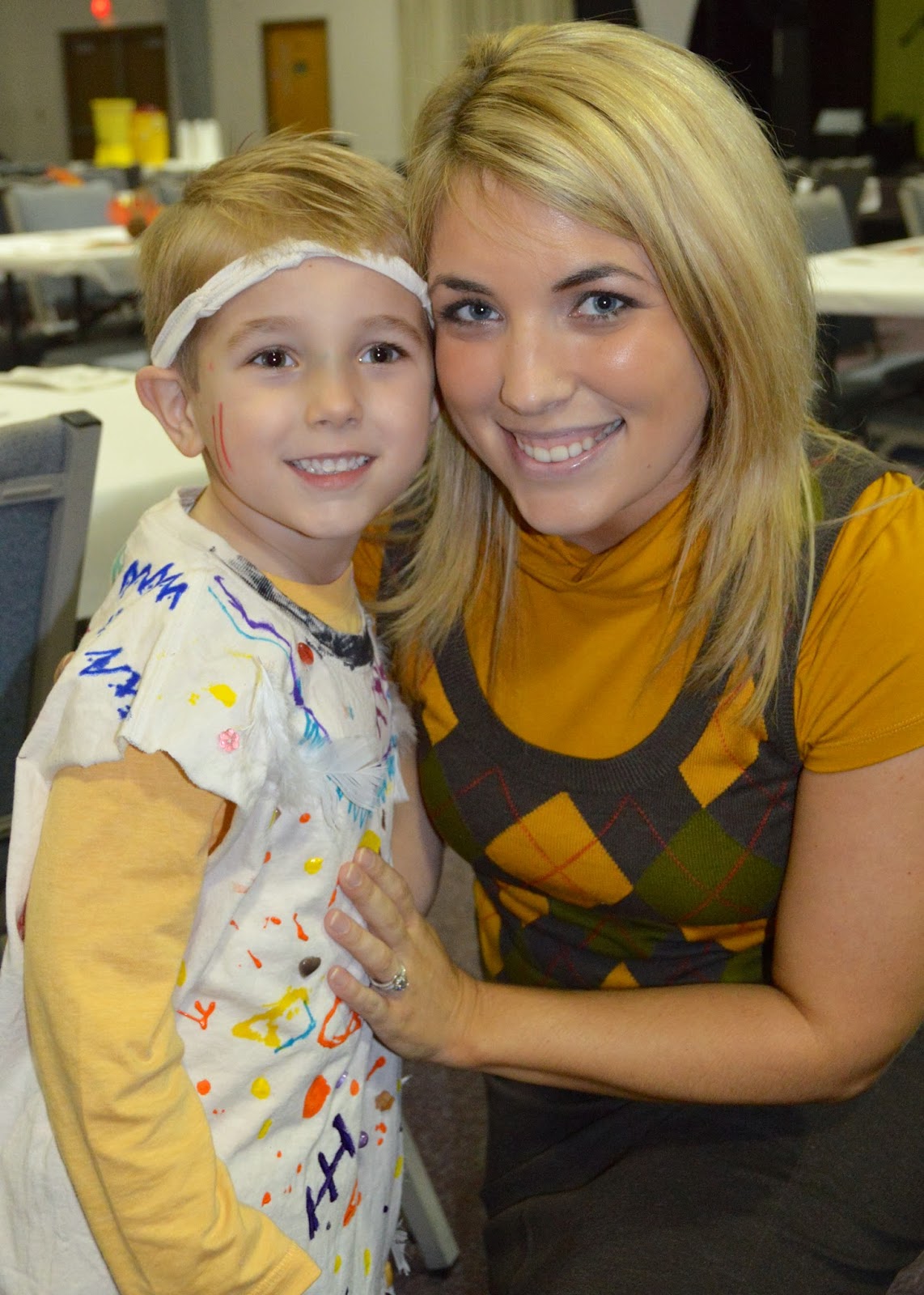 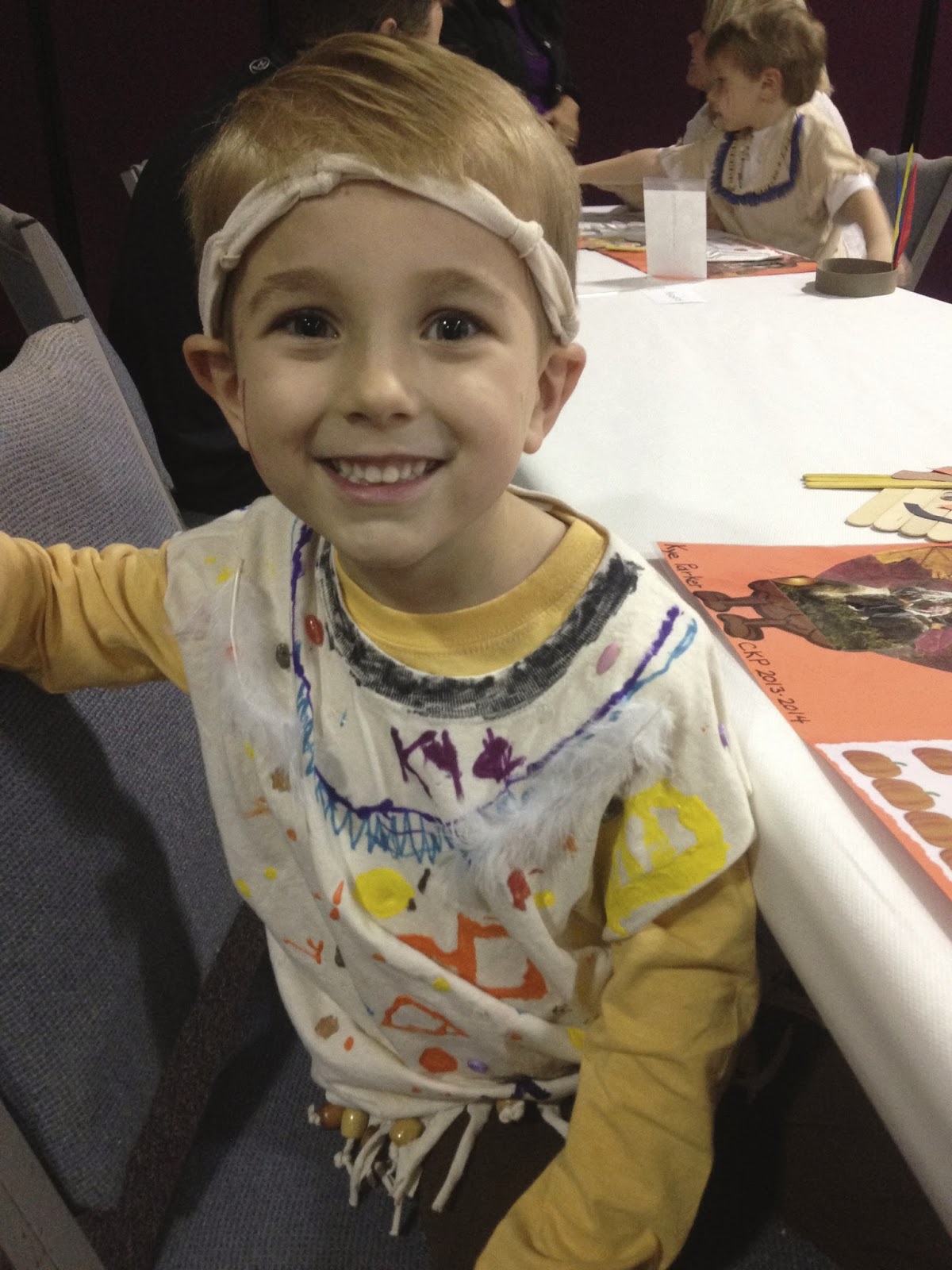 This year Kye had a placemat with his picture on it and a framed picture! Since they did SO much work on their program I don’t think they focused as much on the crafts. I missed seeing the funny things that he was thankful for in years past 😉 I did tell Zach that next year he will HAVE to come because we’ll have both of our kids there!!! 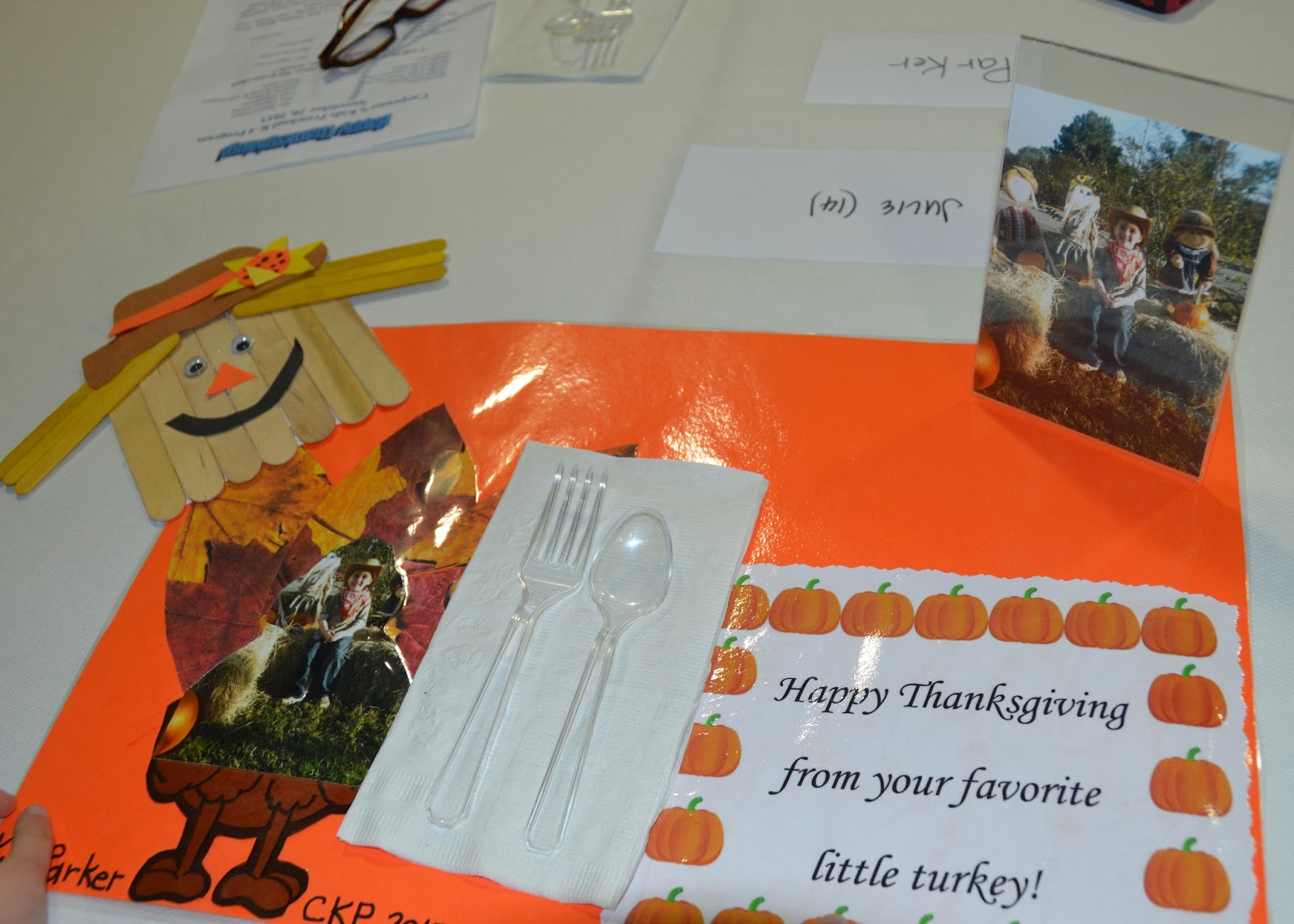 Kye and I enjoyed visiting with G-Mama during our feast lunch! As things started to die down other kids were running and playing and I just didn’t think that was appropriate. I mean I wouldn’t allow him to run around at a restaurant so why would I at school? We took that as our cue to go ahead and head out and he got a little upset but I needed to go pick up Britt anyway! When I got to Mrs. Charlotte’s house to get her both Mema and Big Daddy were there and it was adorable to see them with her. We are so blessed that our children know their great-grandparents!!! Special memories and I love that Britt got that special alone time while I was getting some special Kye time!!!

You can look back at Kye’s past Thanksgiving Feast Days here: