I took a MILLION pictures while on the trip but won’t put them all here, facebook will have most of the pictures on it eventually!

VERY sleepy and glad to get to see our room! It was TINY but the bed was sooo comfortable! 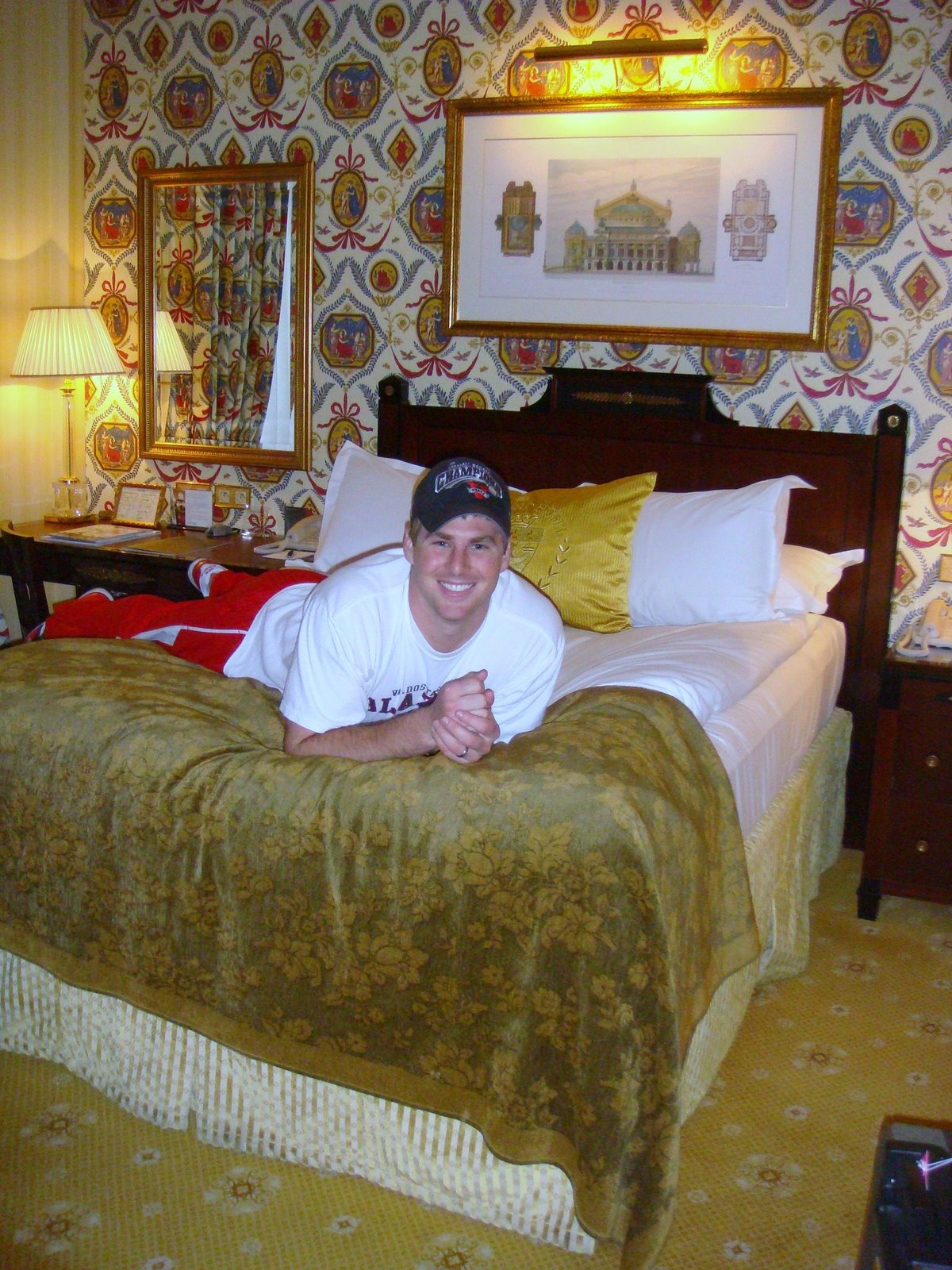 From now on we decided that any Aflac trip we take that changes time zones we will come a day early, get a cheap hotel room for that night, and just SLEEP.

When we went to San Diego we slept the whole first day and felt very rested, but we were in PARIS and didn’t want to waste time sleeping!

We so should have though b/c we were exhausted the rest of the trip.

Once we got a short, 2 hour, nap in we went exploring the city!

Our hotel was right next to Opera Garnier where the Phantom did his haunting! We never went inside, but the outside was beautiful! 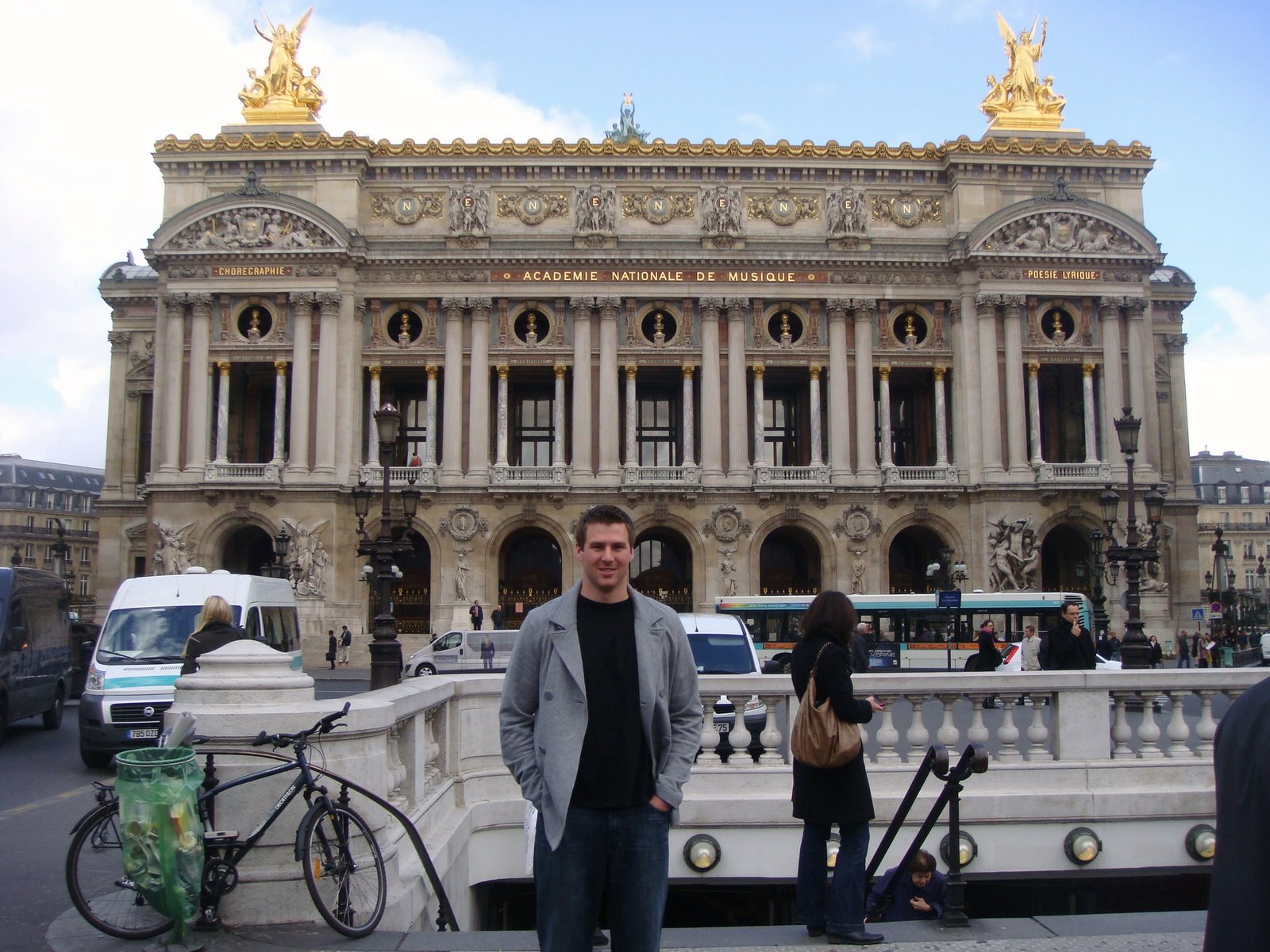 We stayed at InterContinental Le Grand Hotel. It was super nice and in a great location in the heart of the city! Made traveling to different spots so easy! 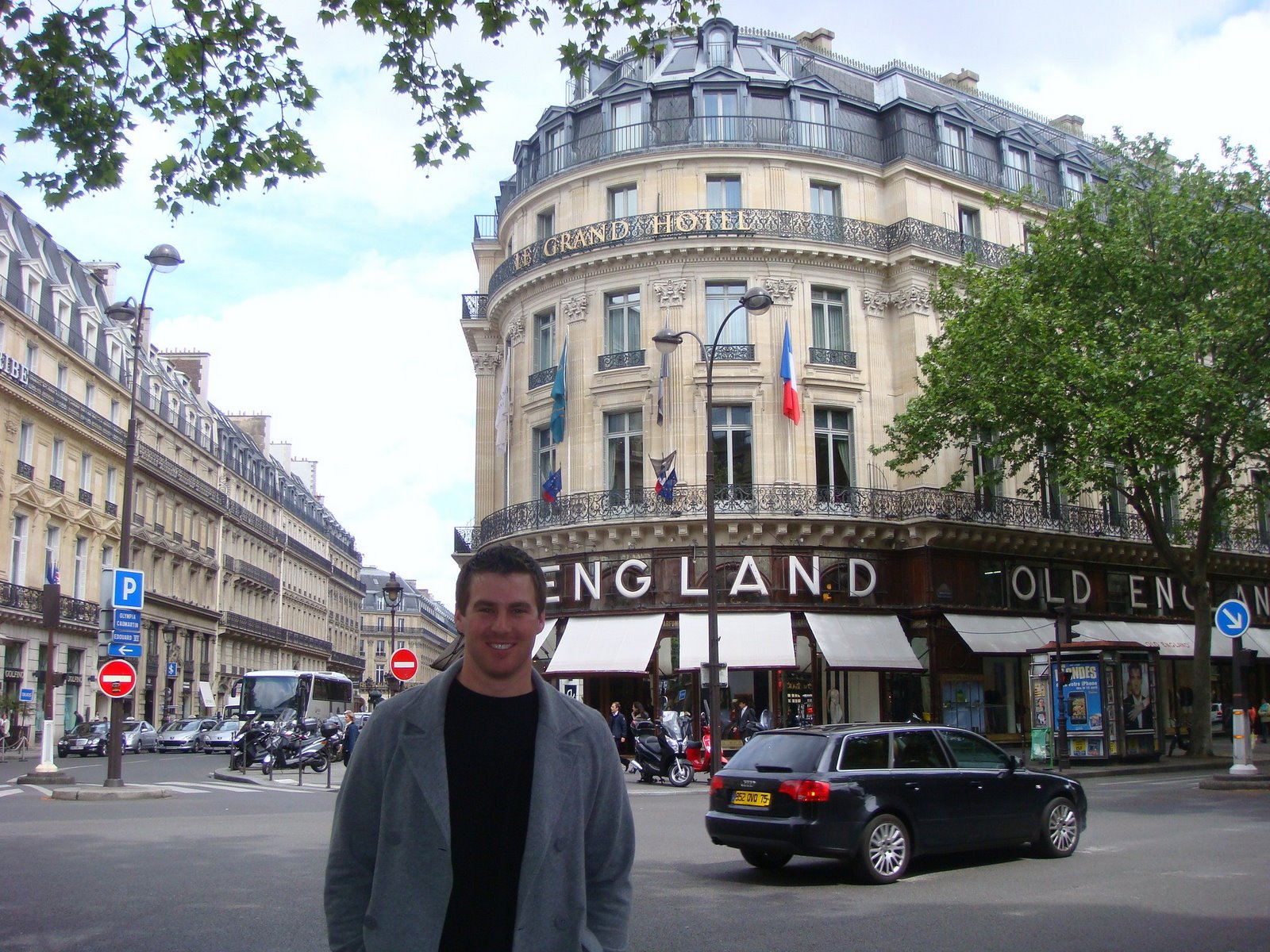 Aflac provided us a lunch the first day and after eating we went to see Notre Dame.

It was incredible. So huge and pretty! Zach hadn’t ever been to a city like Paris and he was amazed at all the architecture! 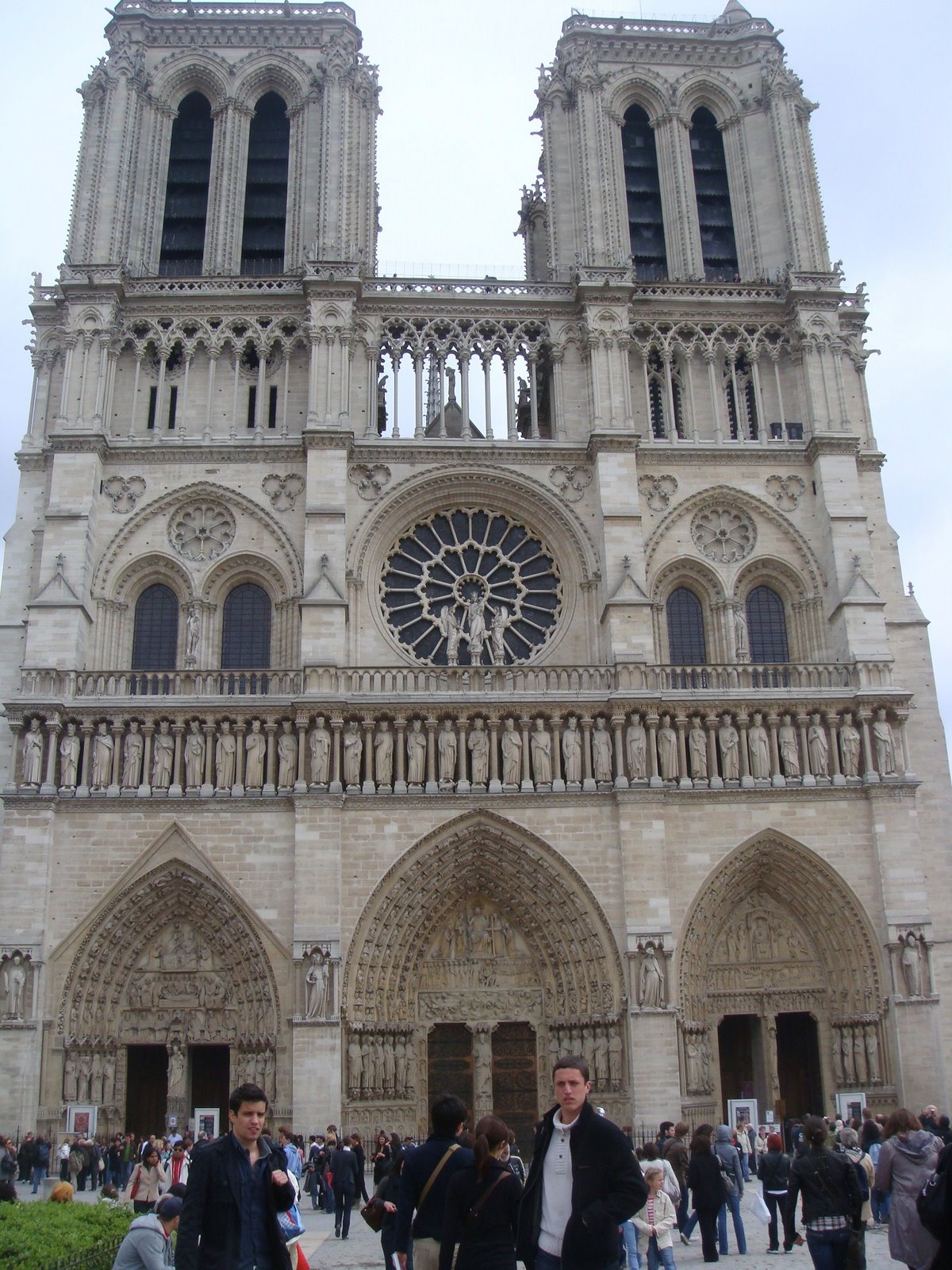 We checked out the whole place as well as the bathrooms but decided not to pay the 8 Euros apiece to climb the tours.

Instead, we walked back to the hotel…which took us about an hour and a half but gave us a great feel for the city. We even had a snack, we shared our first crepe! 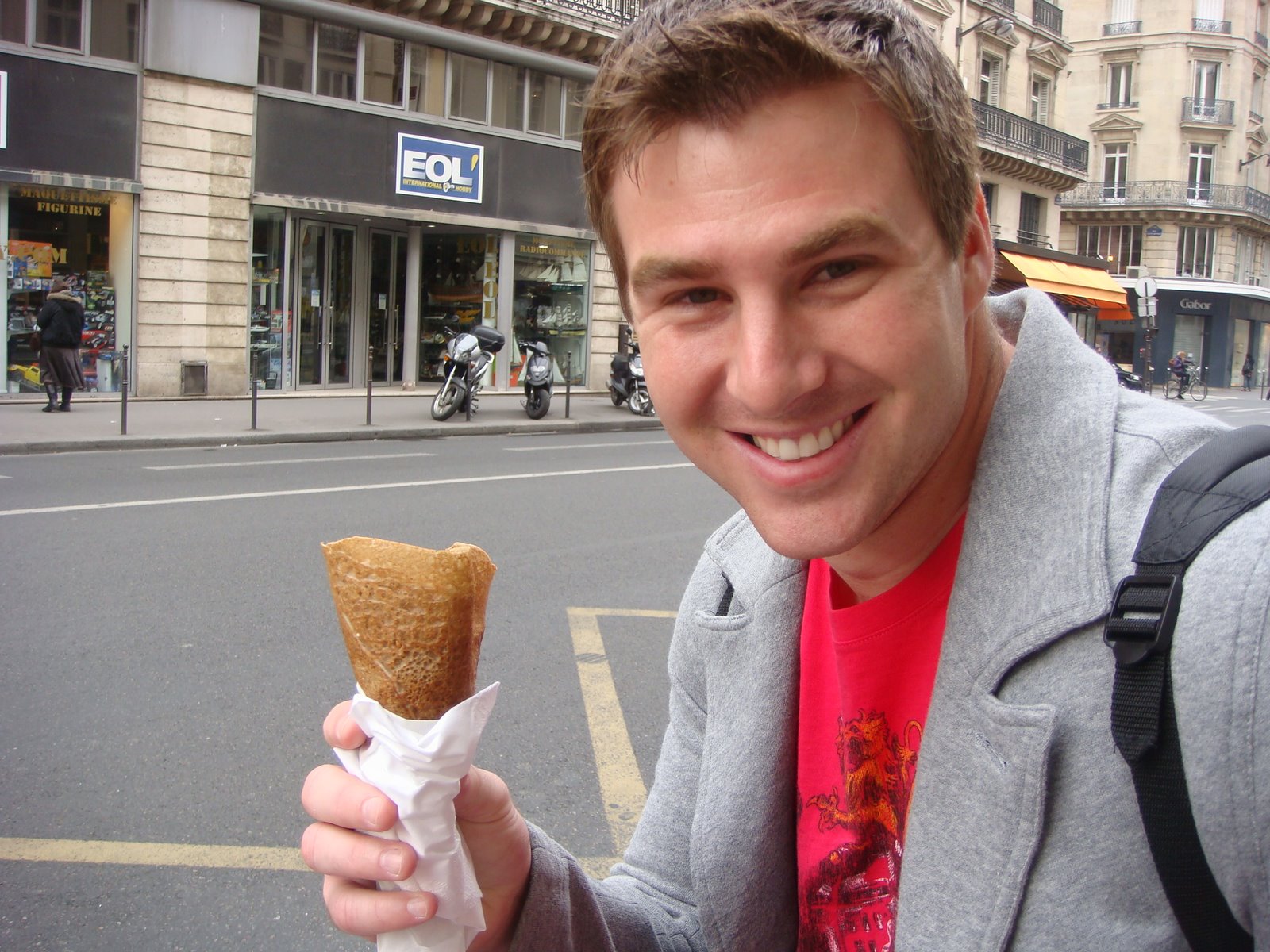 Here’s the guy making the crepe…we got an all cheese one but it was the first of MANY that we’d enjoy while in Paris! So so so good and waaaay better than the ones IHop sells! 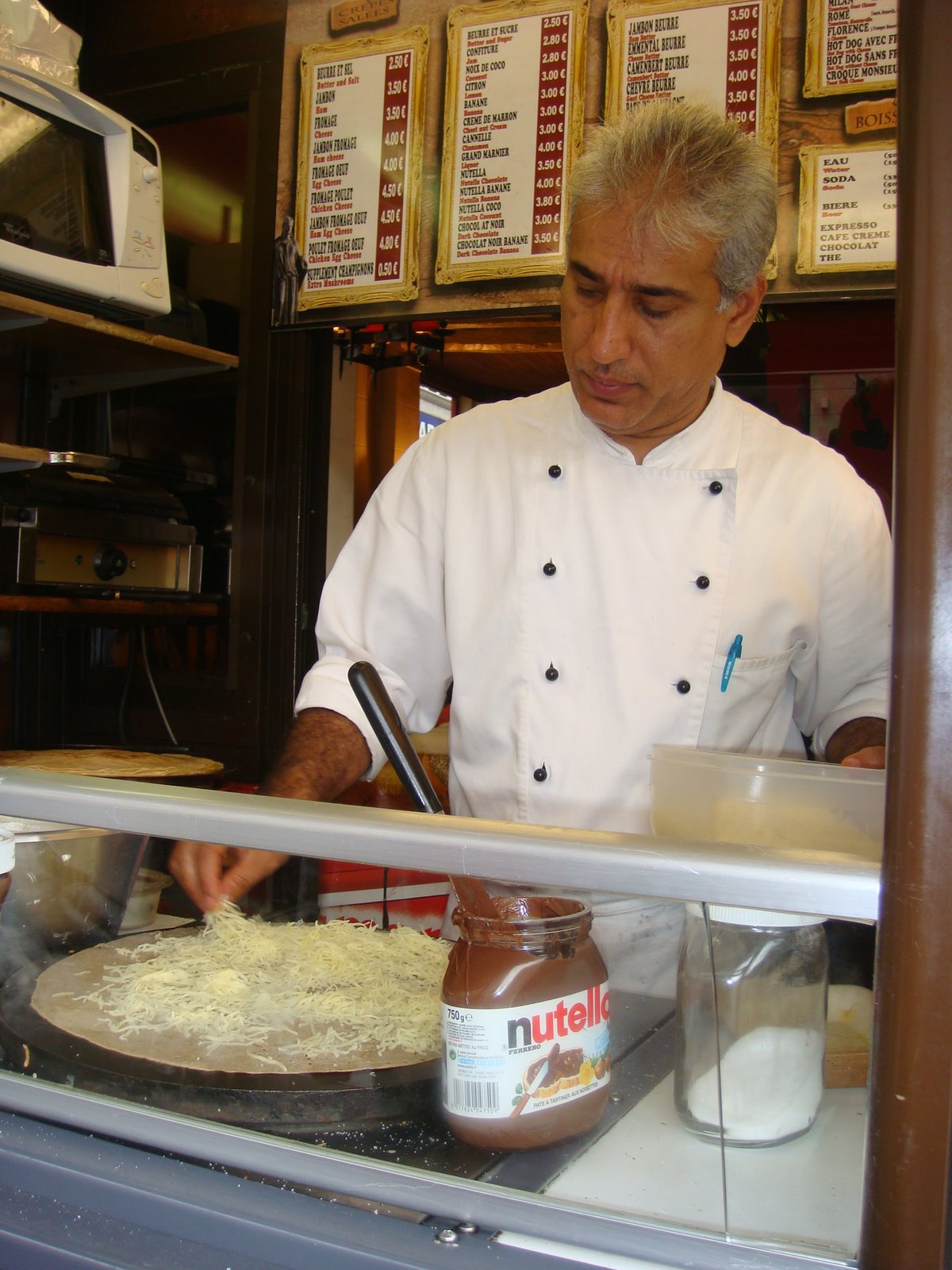 Once we got back to the room we got ready and loaded up on the buses with the Aflac group for dinner. They took us to the last village in Paris called Montmartre.

Some of the world’s most famous artists lived there and painted there! It was all cobblestone streets so I was glad I packed my tennis shoes 🙂

Dinner was okay, they were cooking for SO many people that our steaks were waaaaaay under cooked. Like bloody. I felt bad but we did send them back. Probably got spit in, but oh well!

The best part of the night was that Aflac paid to have artists come to our tables and draw us!

It was so neat to see the guy draw us in like 5 minutes and our pictures turned out pretty good! He made a LOT of the people look goofy and I was thankful he didn’t do that to me 🙂 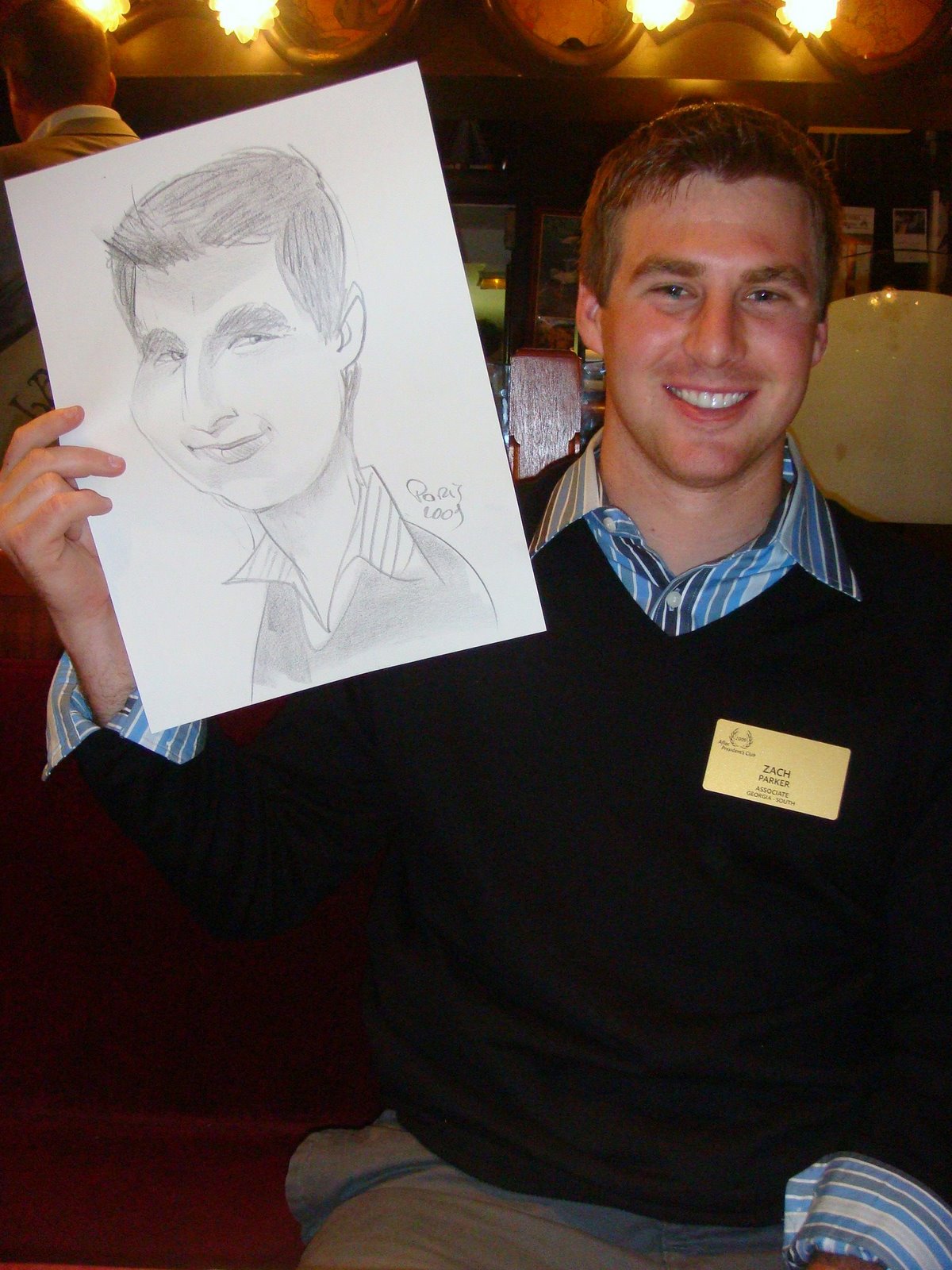 Aflac provided us breakfast each morning and gave us use of the internet for free, so instead of calling Mom all the time to check in on Kye I decided to email her each morning and see how things were going.

After emailing we set out on the cooler hunt then came back to the room to pump and headed over to the Louvre.

We had the public bus drop us off at the garden in front of the Louvre and we bought lunch…yes, another crepe!

This time ham and cheese! Super yummy and they are pretty cheap which worked out well because Aflac gave us $185 for lunches and I think we spent even less than that on all the lunches the whole trip!

Paris is known for it’s beautiful streets and this arc aligned with the Arc de Triomphe, so pretty! It also served as the entrance to the Louvre! 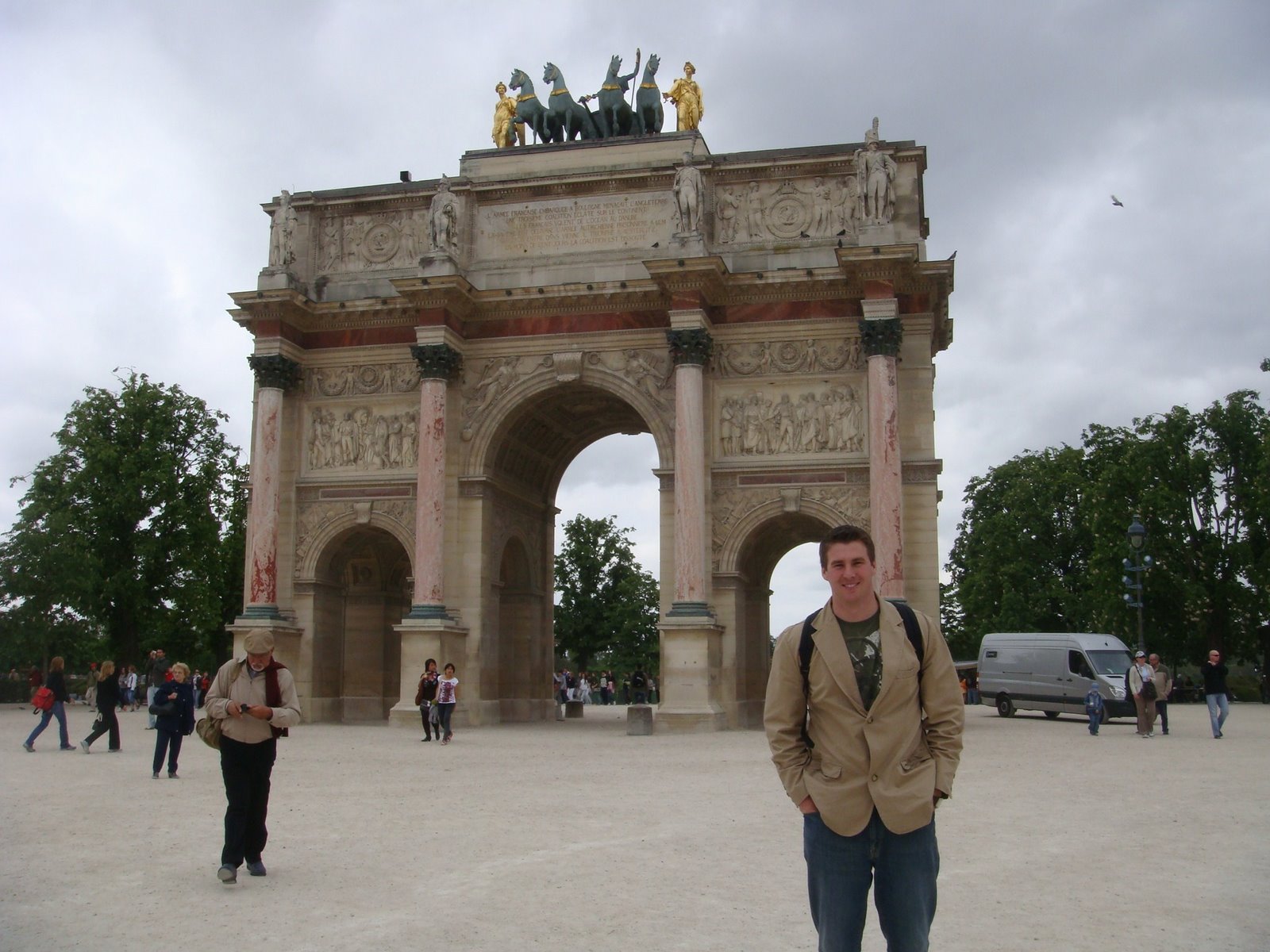 Had to get a pic in front of the famous pyramid!

It was built in 1989 as the entrance to the museum because the museum itself was once the world’s largest royal palace and when they turned it into a museum they had to make it easily accessible to people so they connected all the wings underground.

In order to not feel claustrophobic, the pyramid was made so the underground tunnel felt open to the visitors. Of course we just know it from the movie the Davinci Code! 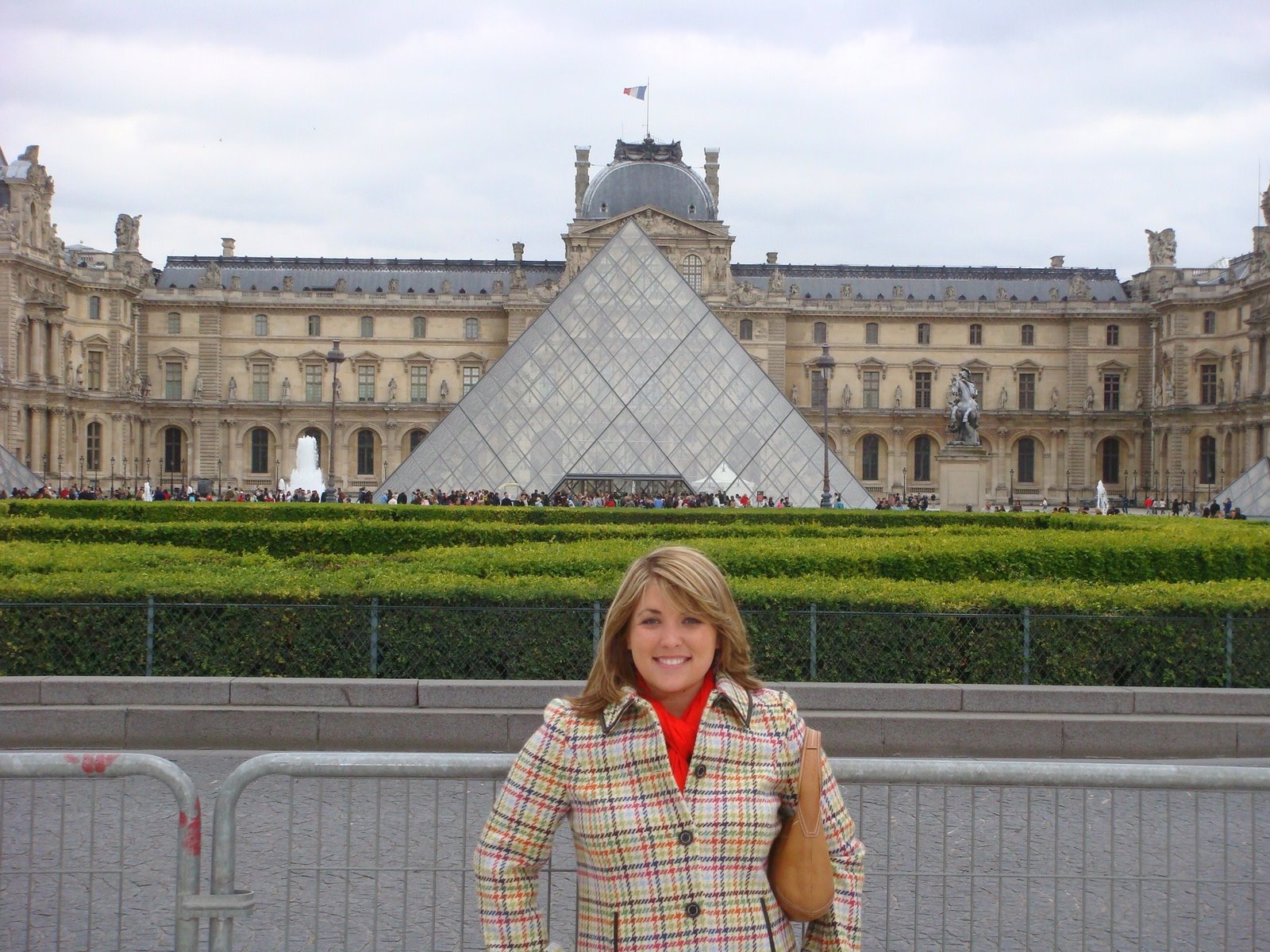 Before leaving for the trip I invested in a $12 Frommer’s book all about Paris…we had one for the New York trip we took on our honeymoon and it was super handy.

This book was great as well as it mapped out the Louvre for us and told us what were the most important pieces to see.

We were told that if you looked at each piece of artwork for one minute, 8 hours a day, 5 days a week that it would take you 10 years to see each piece in the museum!

Obviously we didn’t have that kind of time so we were able to crunch it all in in about 3 hours!

I think seeing Venus de Milo was my favorite thing. She was so beautiful! 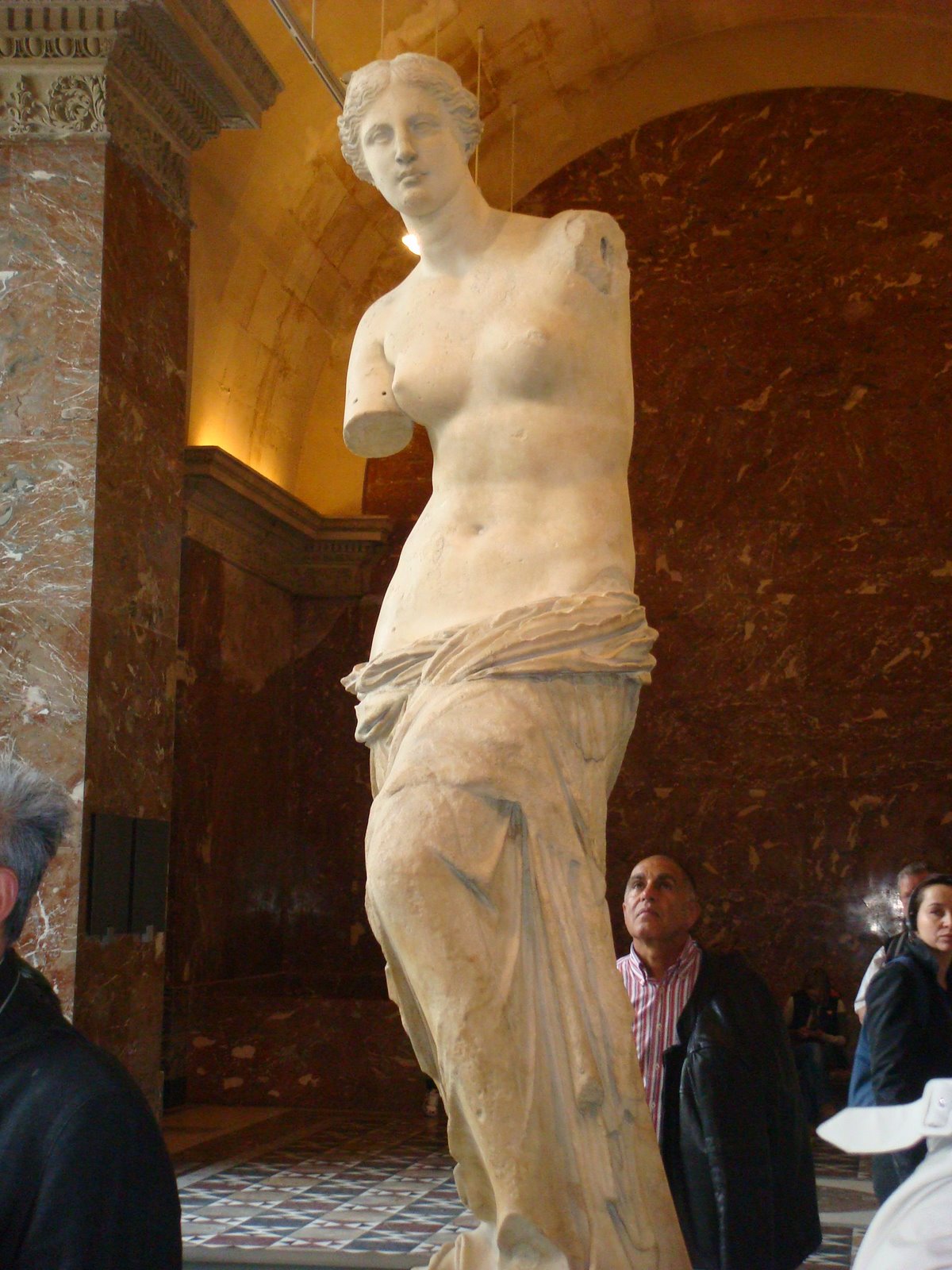 Statues are way cooler than paintings to me so Zach and I also enjoyed seeing the Winged Victory of Samothrace. It dates back to around 200 BC! 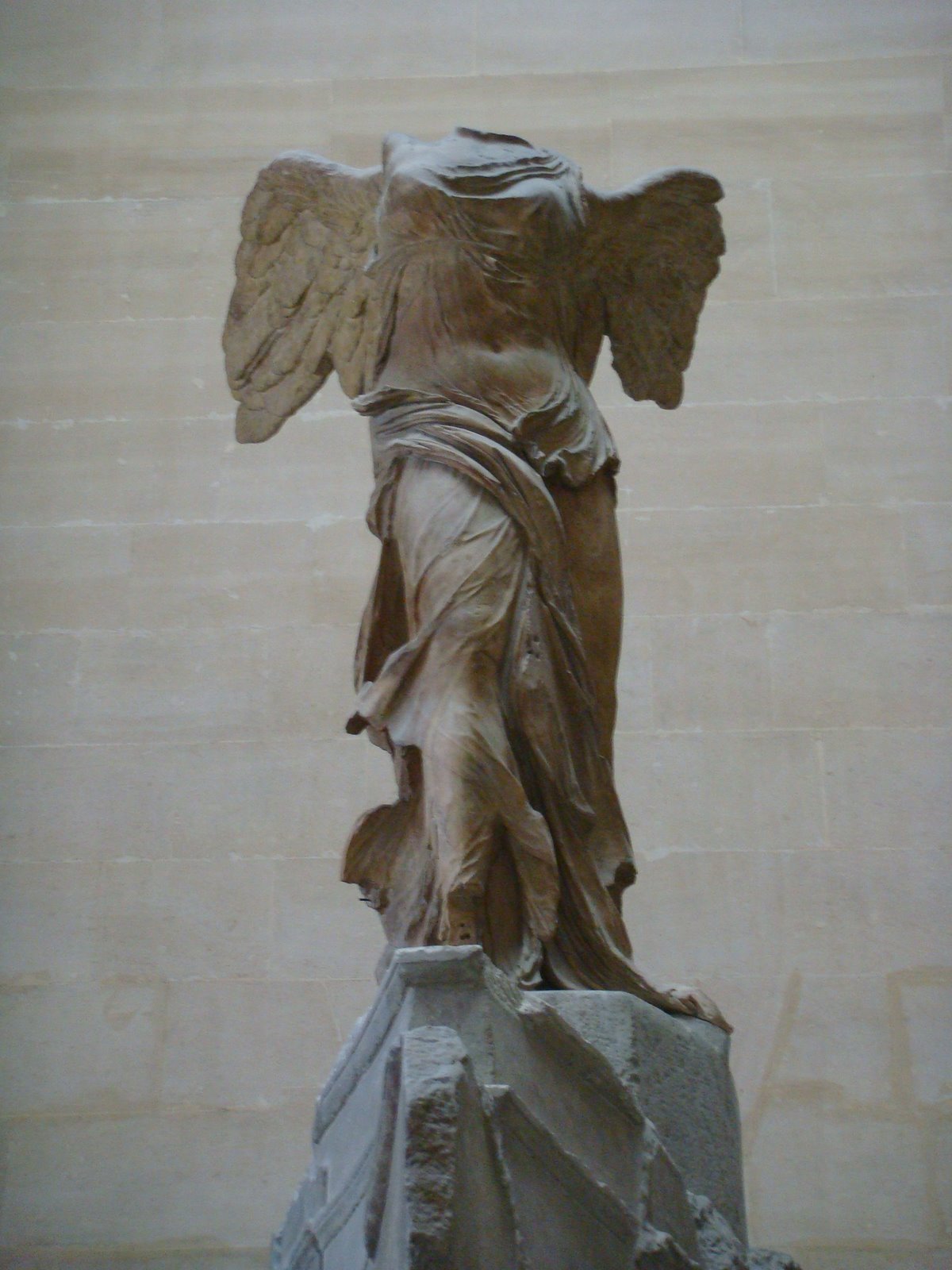 Our book gave us 7 of the top things to make sure we saw while there (yes, 7 things and it took us 3 hours).

I was a sweaty mess walking up down and around to locate each item.

I was LIVID when we got to the Turkish Bath, Card Sharper, and Lacemaker…as they were ALL gone.

I asked some lady and she said they were on exhibition in Japan! Bad timing!

So we did all the walking to see 7 things but only actually saw 4 of them. I asked her if the Mona Lisa was still here and she said, “Oh she never leaves.”

We took pics in front of the missing artwork! All that walking for nothing! 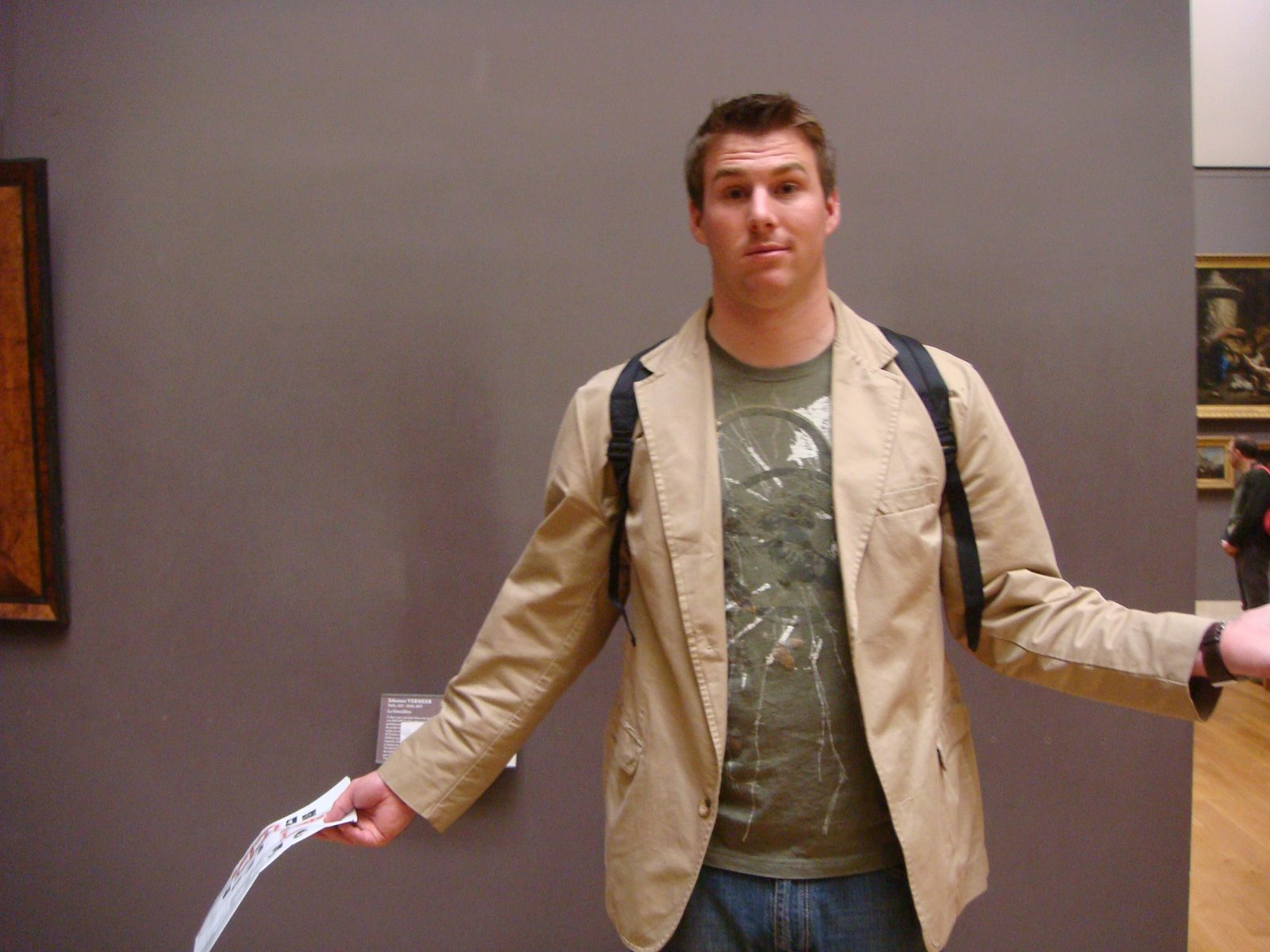 Even though it was a mad rush to hunt down the stuff we needed to see, we still took time out to look at other stuff on our way. Had to take a picture of this! It’s of Jesus getting circumcised!!! 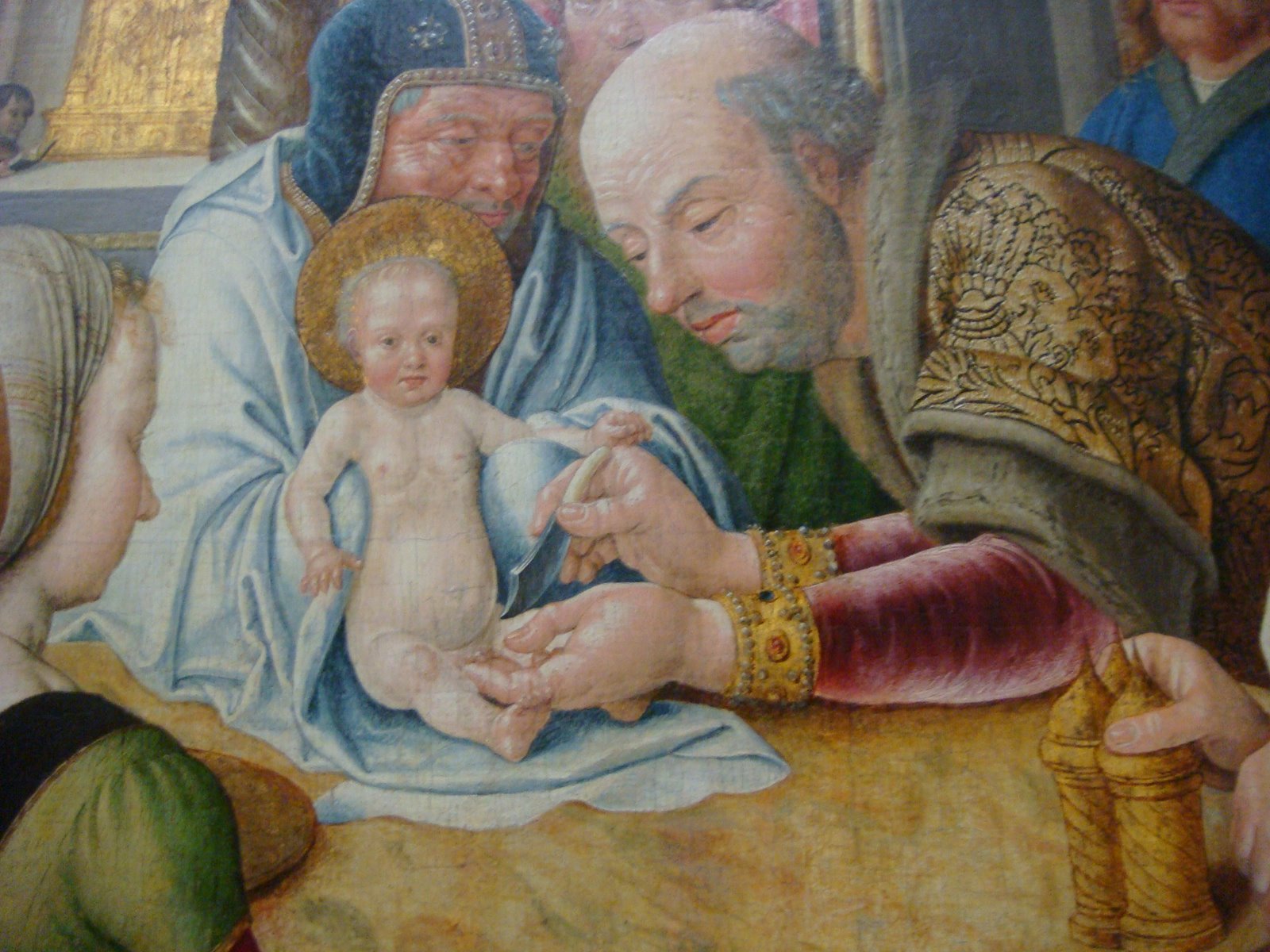 You can see why the stairs wore me out, look how HIGH all the ceilings were!

And pretty much every room looked like this…so so beautiful.

We did enjoy the Louvre but we decided we actually like the Biltmore House in North Carolina better haha!

The Louvre used to be a palace and we wish they would have just kept it all decorated as it was when the kings lived in it.

Biltmore is more fun because it’s set up like it was when people lived there, the Lourve is just room after room after room of art which gets pretty boring pretty quickly! 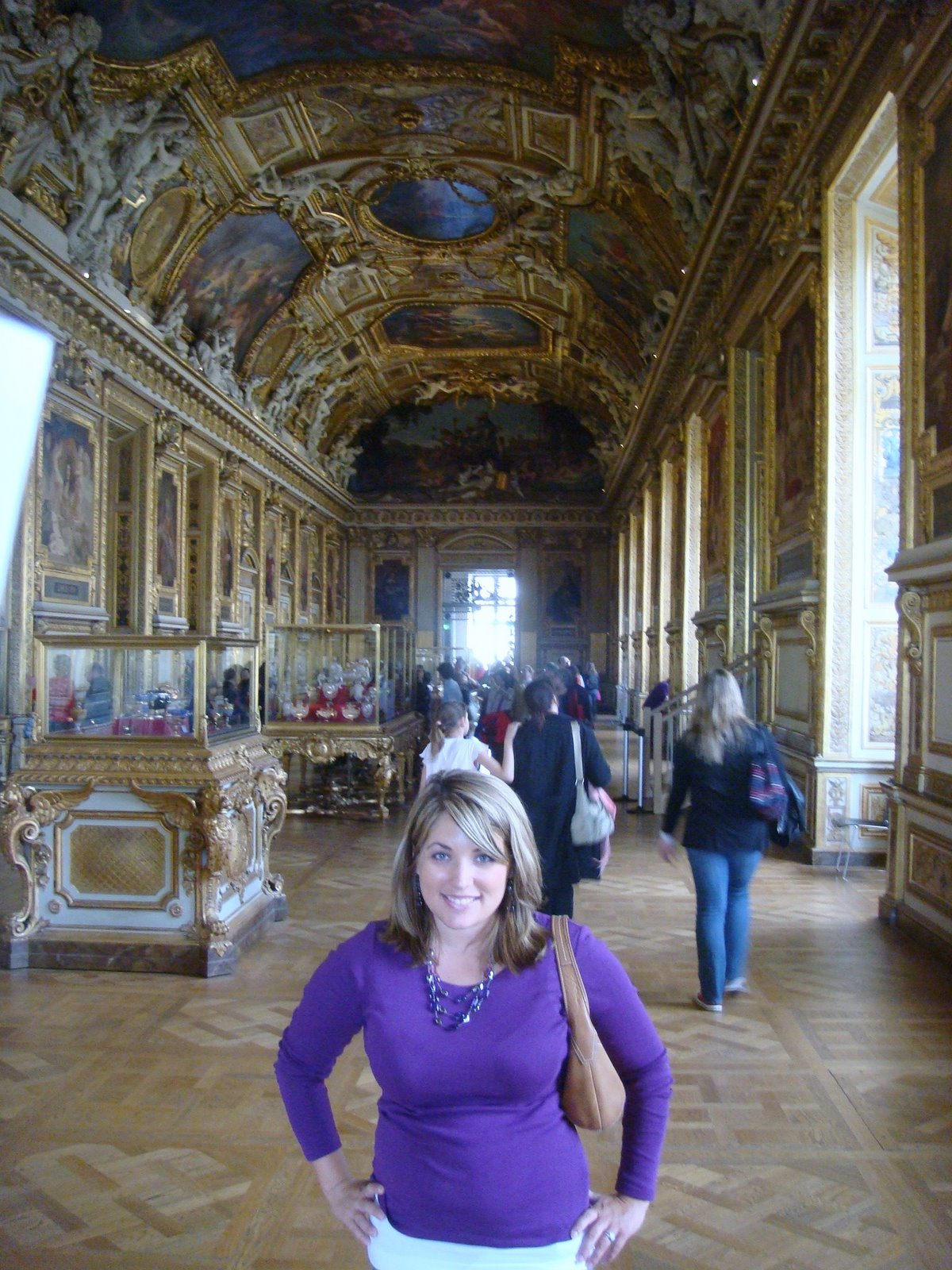 When we heard we were going to Paris we really only thought of the Eiffel Tower…I didn’t even know the Mona Lisa was in Paris!

The painting is very small but so cool to get to see in person. It did give me chills. We got lucky that it wasn’t too crowded and we were able to get right up front pretty quickly! 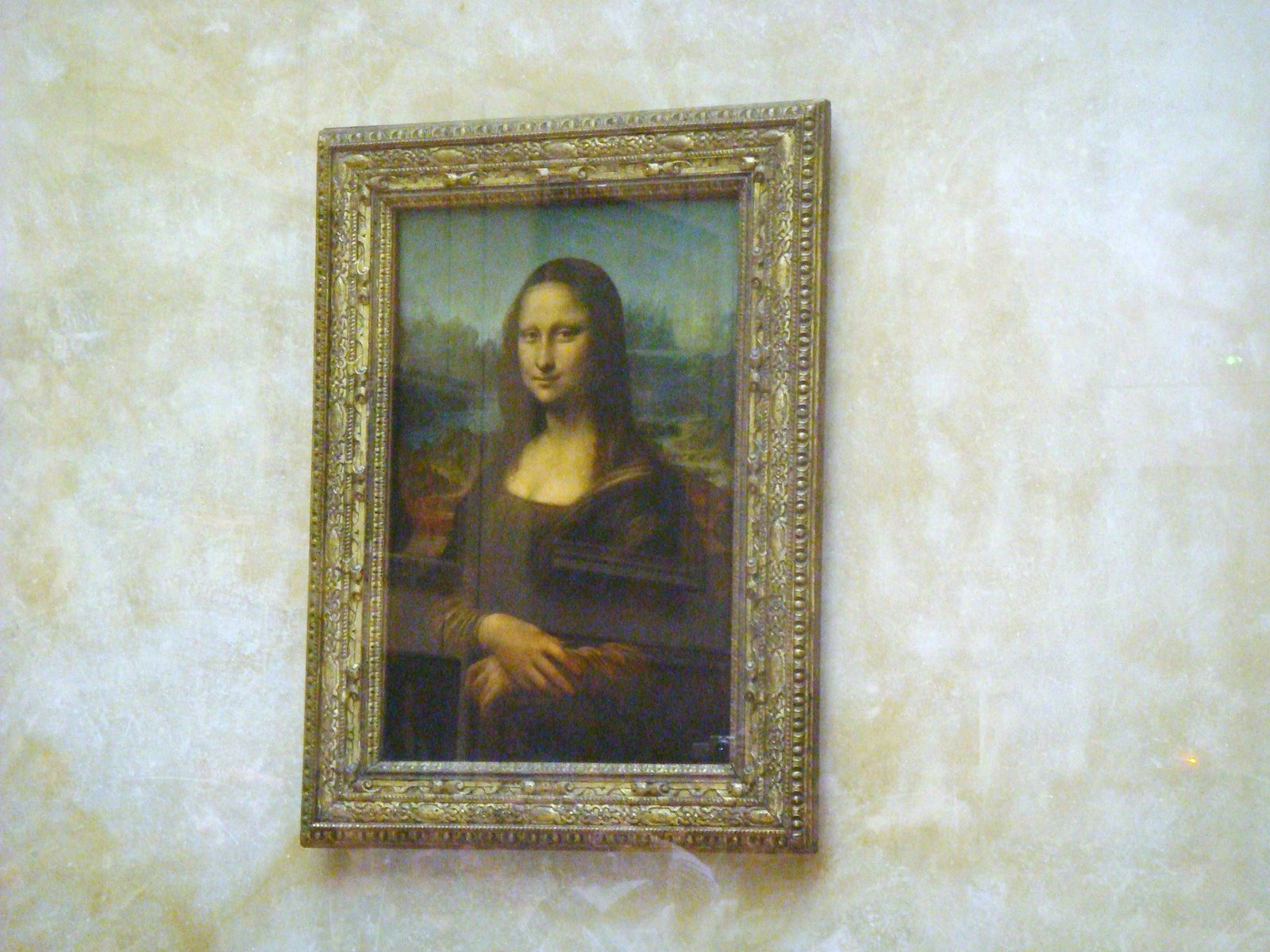 Zach loves to tell people that it took over 300 years to complete the Louvre…pretty amazing building! It’s for sure a one-time-visit type thing but so worth visiting! 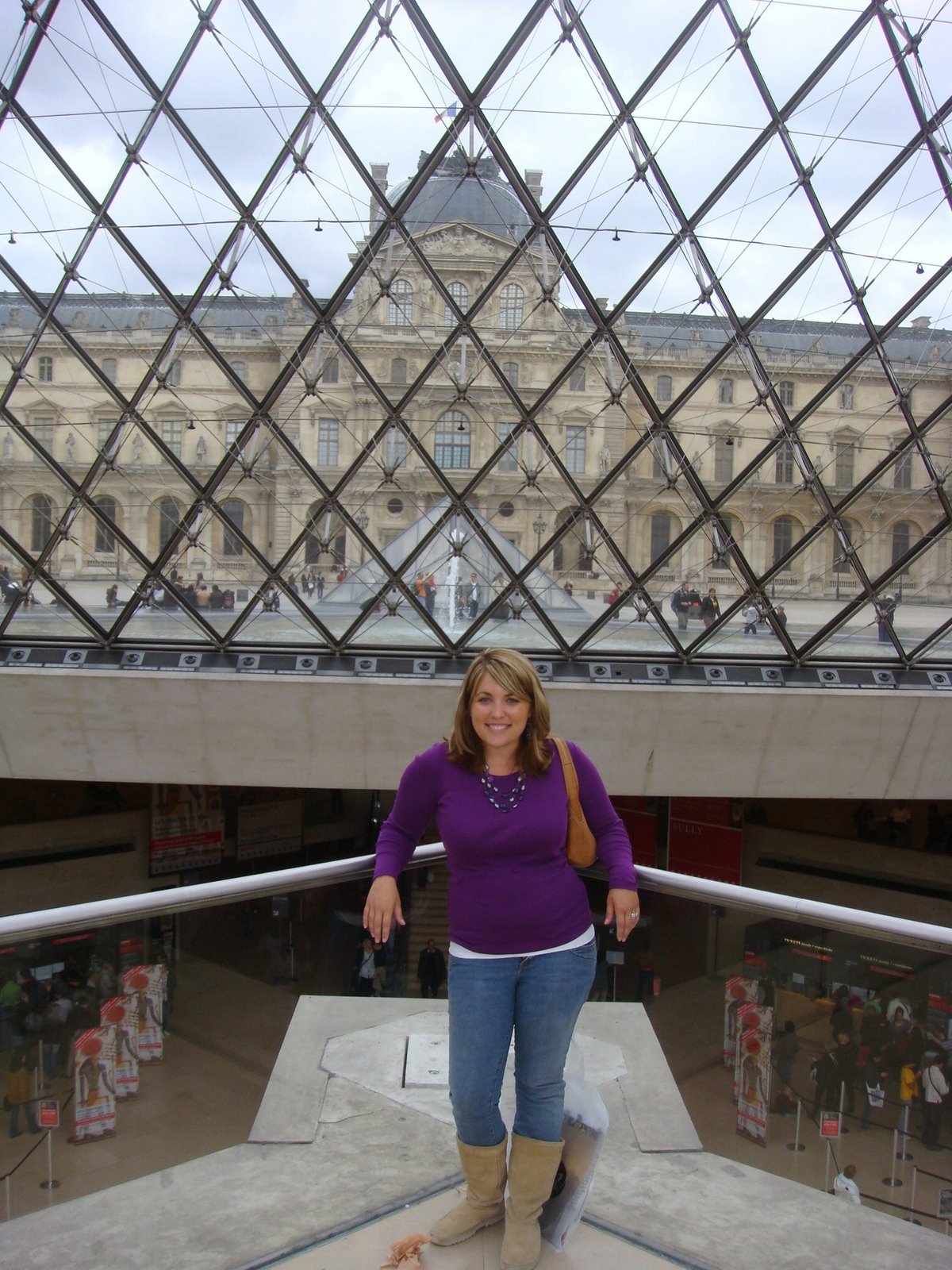 Out of all the things Aflac did for us while on the trip, I was the most excited about going to the Moulin Rouge.

I loved the movie and think it’s awesome that we got to not just see the building, but watch a show!!! 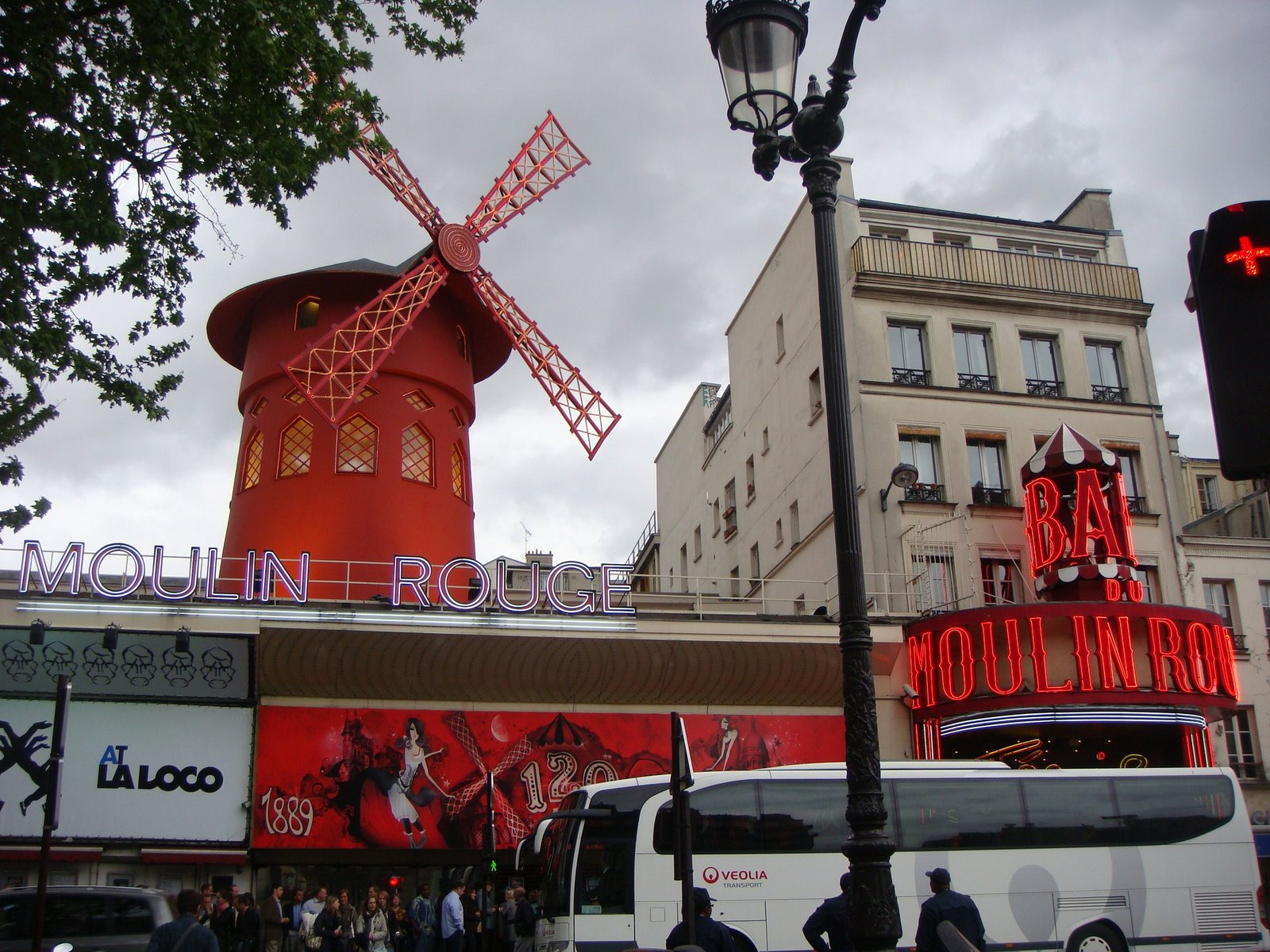 The Moulin Rouge (which literally means “red windmill”) started the whole can-can dance thing and they still do it today.

The dancers only make like $100 a night and they change shows, and dancers, out every four years.

They didn’t allow us to take pictures inside…but I got a couple!

And got caught doing it! I couldn’t post them because you can see some boobies!

Everyone knows Zach and I are very conservative but I honestly thought the topless dancing was done very tastefully. The girls were so pretty!

One annoying thing? The guys had AWFUL outfits and seriously wore turtlenecks…so we see practically naked women but fully clothed men? Not fair!

The show was awesome but the intermissions in between acts were even better!

The first one a guy juggled SEVEN little post things! I’ve never seen such a juggling act, he was awesome.

Then a girl swam in a glass tank with three anacondas! And they had an awesome ventriloquist and a super skinny girl who, among other things, stood on top of a cane!!! 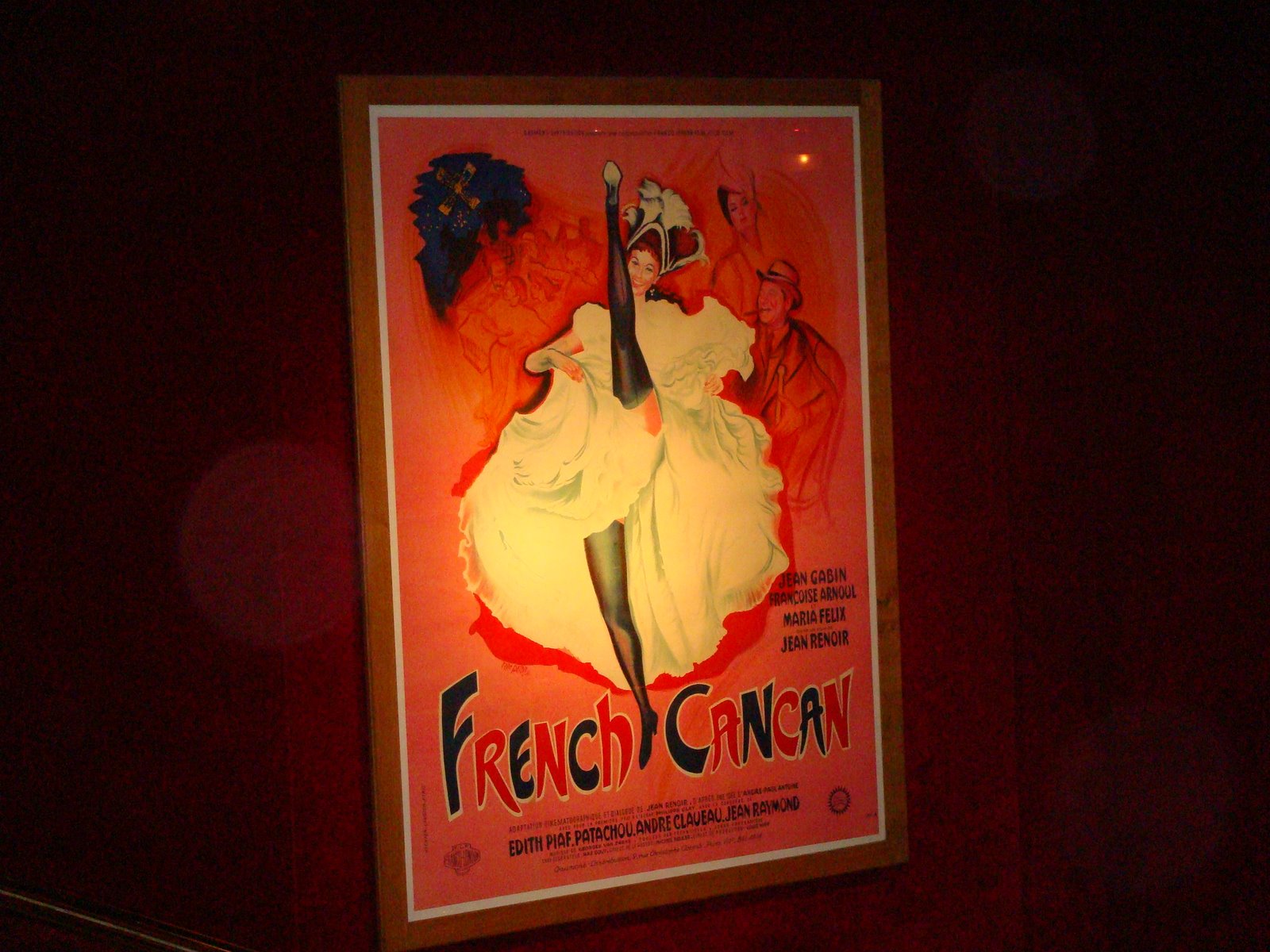 We agreed before the trip that we’d try just to spend close to the amount of money that Aflac gave us but that we did want a couple of souvenirs.

Since we travel SO much we think it’ll be a neat tradition to get a Christmas ornament everywhere we go.

I can just picture our little family decorating the tree every year and remembering fun moments from our trips. We got this cool ornament at the Moulin Rouge with a working windmill! 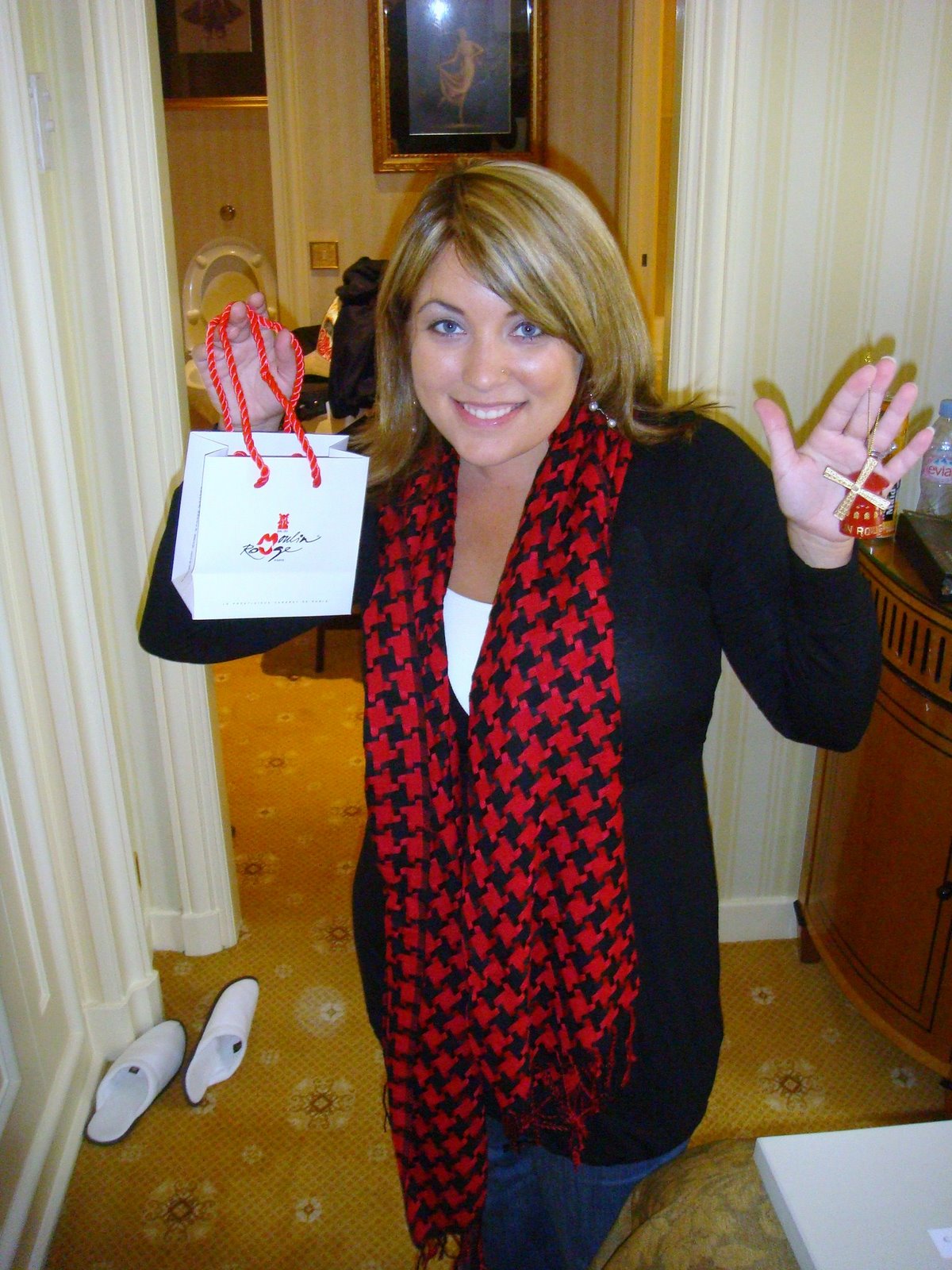 It was a super fun night and although we didn’t get to bed until super late it was worth it! The show was probably one of my favorite things that we did on the whole trip!

You can read Part 2 of our trip here

And about my pumping experience during this trip here!