We went to San Diego for Zach’s first Aflac National Convention! It was great because Aflac flew us out of Valdosta so the travel was pretty easy and free so we couldn’t complain about it! We’ve been stuck in Valdosta for awhile now and I was really in need of a vacation!

Since there is a 3 hour time change I was out of it when we arrived so all day Wednesday we just slept and relaxed before dinner. We got hooked up with a great room at the Manchester Grand Hyatt! Check out our view!!! 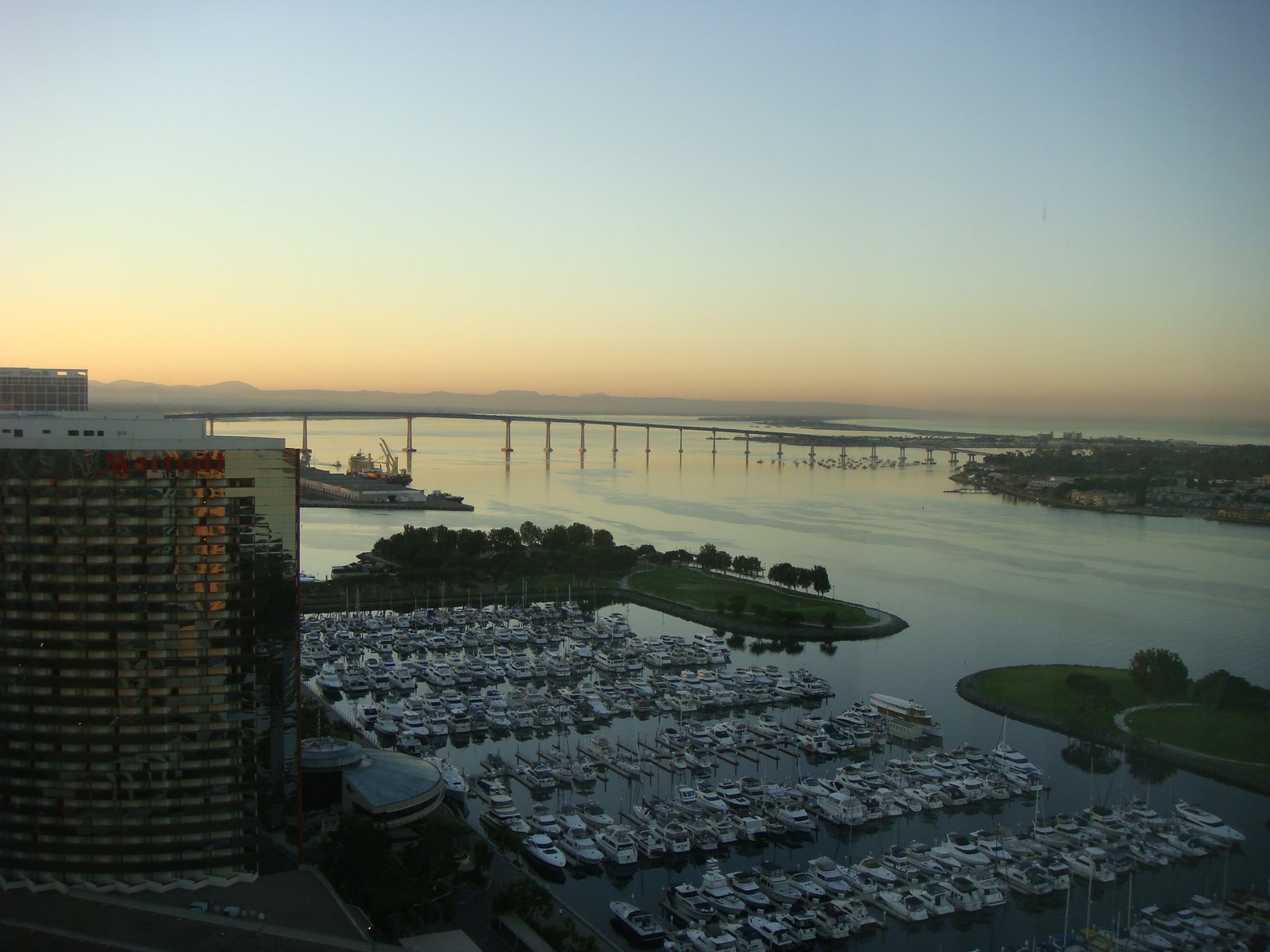 The first night we got to eat aboard the USS Midway. The food wasn’t as awesome as some of the other meals but it was neat to be aboard such a huge aircraft carrier! One thing about Aflac trips is that everyone gets totally wasted at everything because they not only provide free food, they also have unlimited alcohol. It makes it hard for Zach and I to have a good time when so many people are totally wasted but we got lucky at the table we sat at and made friends with an older couple and a girl from my town, Boston! 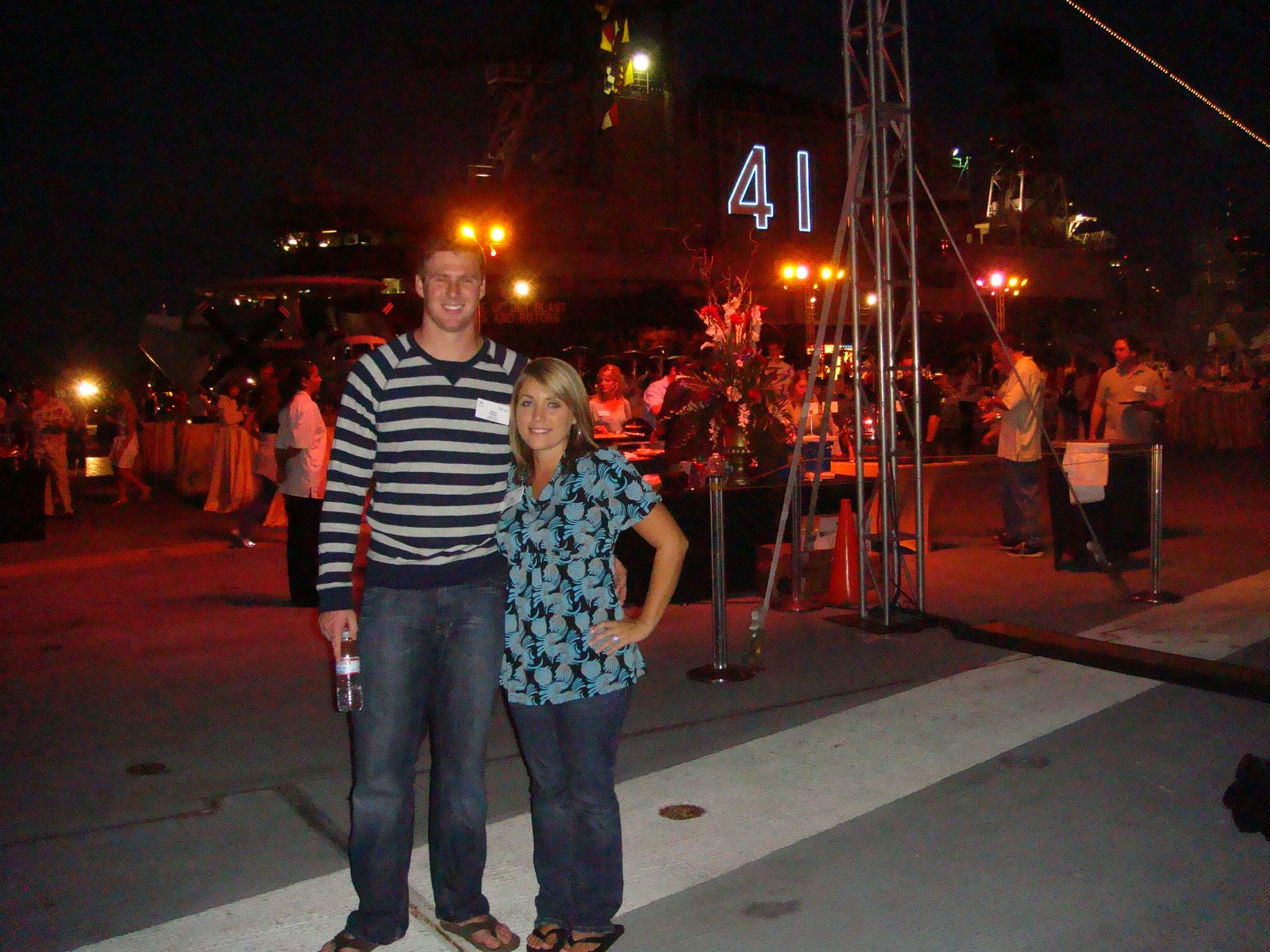 Aflac “only” provided flight, hotel, meals, extra meal money and tickets to the zoo so we had 2 free days to fill! Since I haven’t been to San Diego since I was nine I didn’t really know what all we could do and we really didn’t want to spend the money on a taxi (and nothing was near by the hotel!). We got lucky and right outside the hotel was this little village filled with shops and a beautiful boardwalk so we spent the day shopping and walking around! 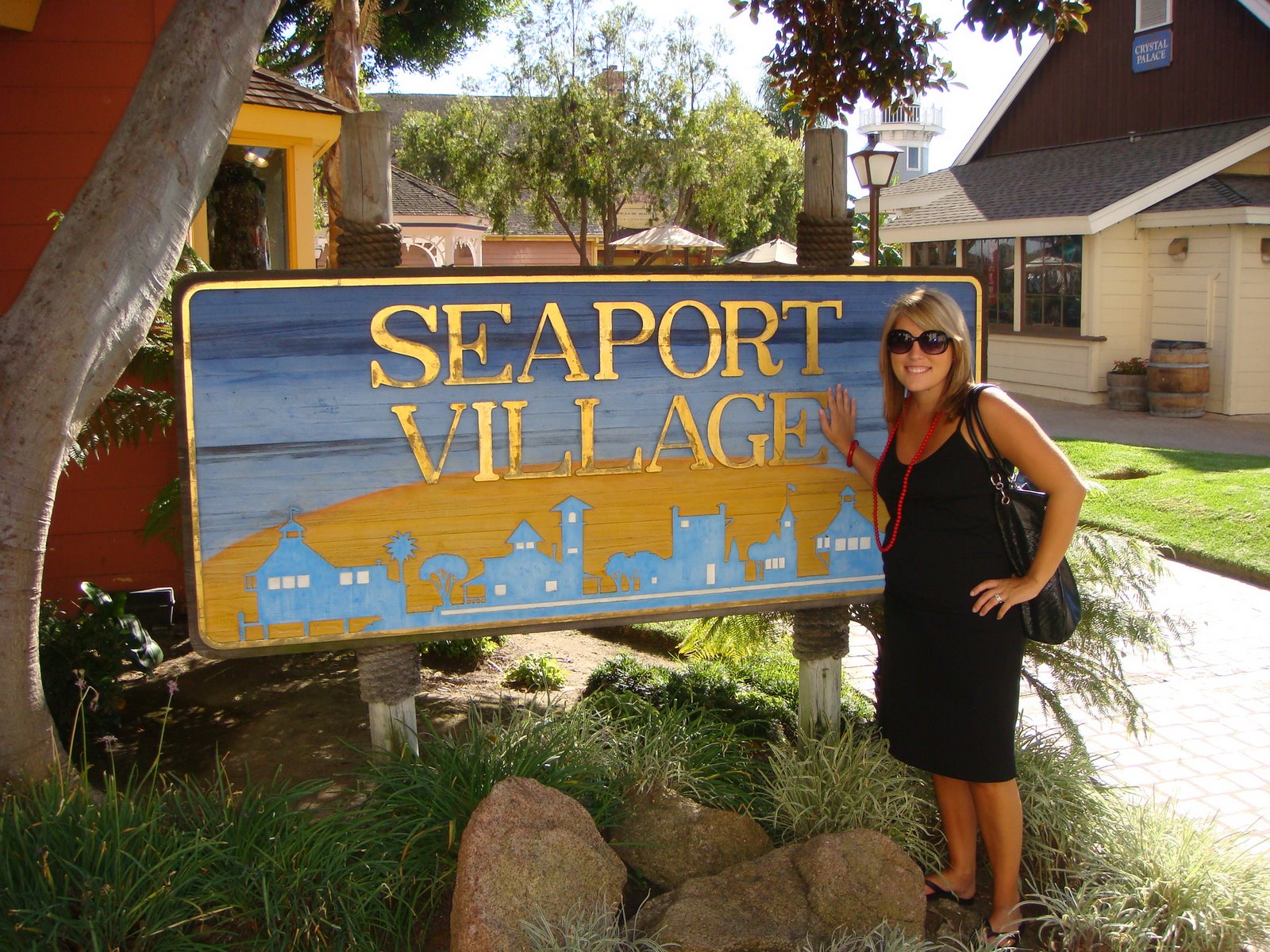 The next day was a ton of walking! We went with the Aflac gang to the San Diego Zoo! This picture is the same picture I took when I was nine and went with my dad in front of the hippos so I had to do a repeat 🙂

By the way…how do you like the hair? My hair lady taught me how to do it wavy and I’m testing it out and practicing so it will look good for when I go to the delivery room! haha! 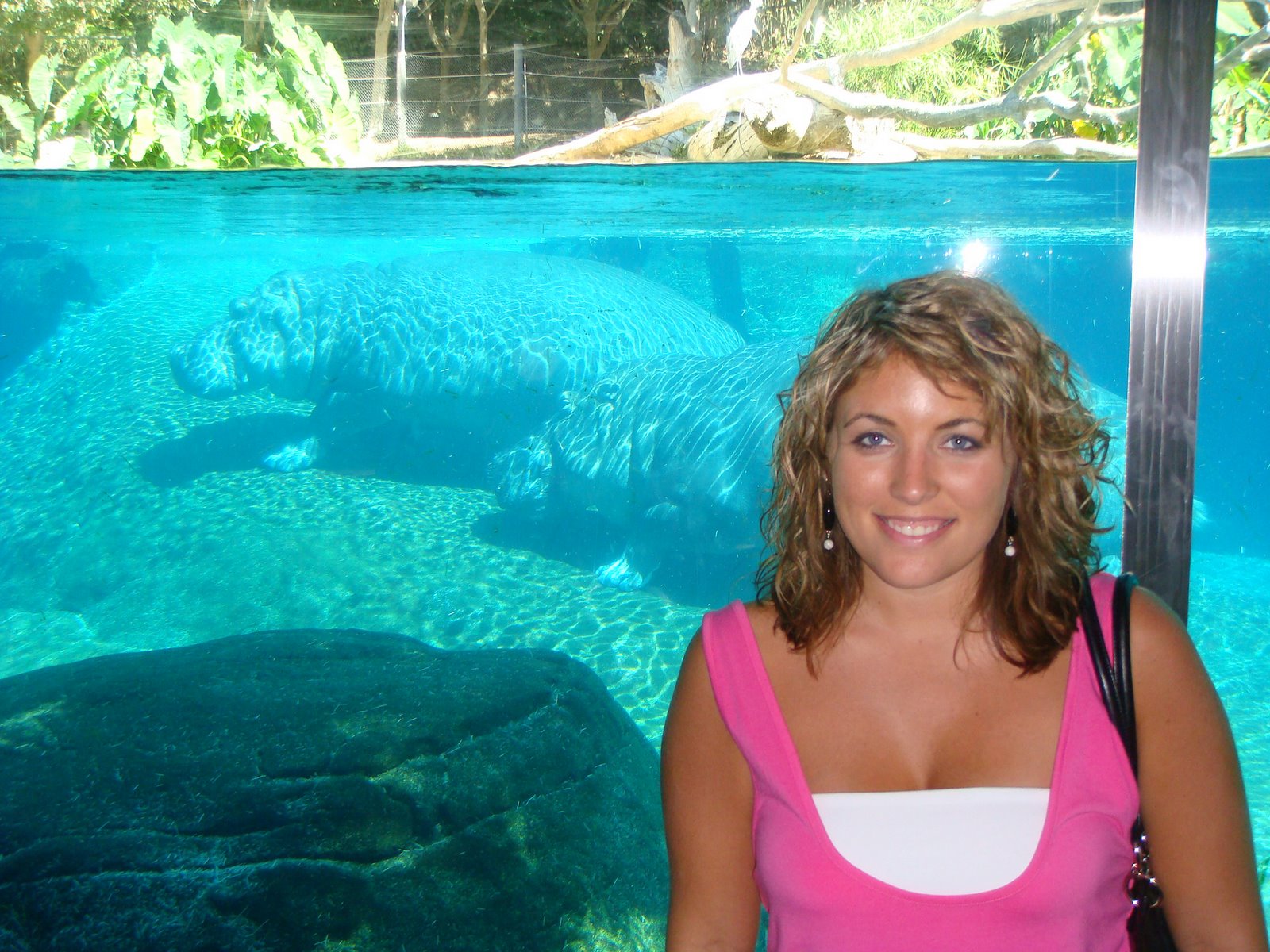 We really got some great pictures of the animals! The gorillas were the most active, we saw two get in a fight! 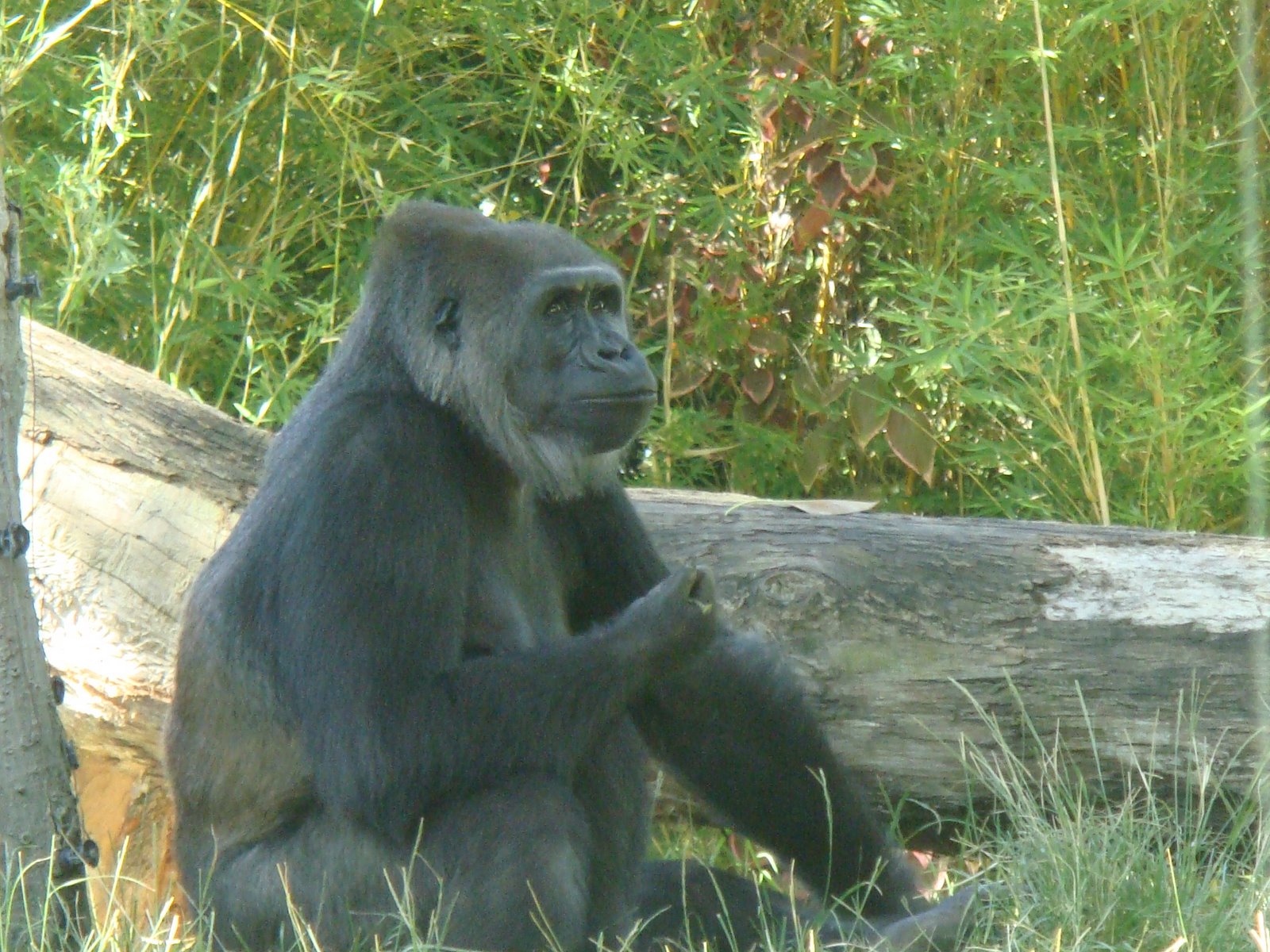 Zach has always been anti-zoos. He has said since we started dating that he’d never take his kids to a zoo! I’m so glad we went because right when we got there we met a lady with her three kids and we sat with them on the tour bus, then saw them at the reptile house, then happened to sit with them at the sealion show. Interacting with them was so neat because they were so excited by everything! Zach said he still doesn’t love zoos but that he had fun and that he will for sure go with us with the kids (or kid until we have another one haha)! So it was a very successful day for me 🙂 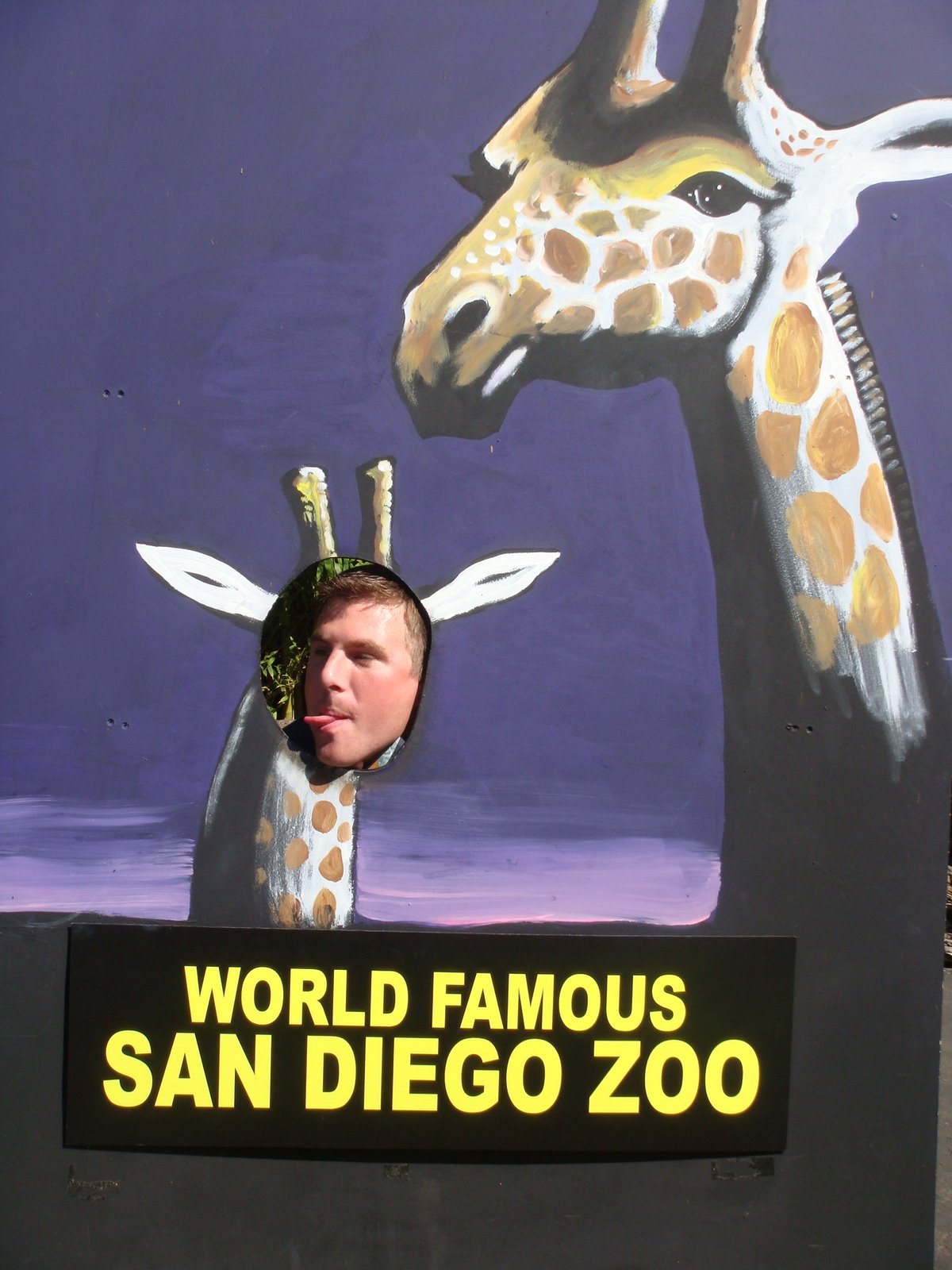 It was nice having money from Aflac so we could eat when we wanted to! We got a yummy yummy snow cone! Of course it was kids get in free month so the place was CRAWLING with horrible behaving hispanic children but we still had a great day together! We even stayed later than the Aflac buses and caught a taxi back to the hotel to get ready for our date night at the pier 🙂 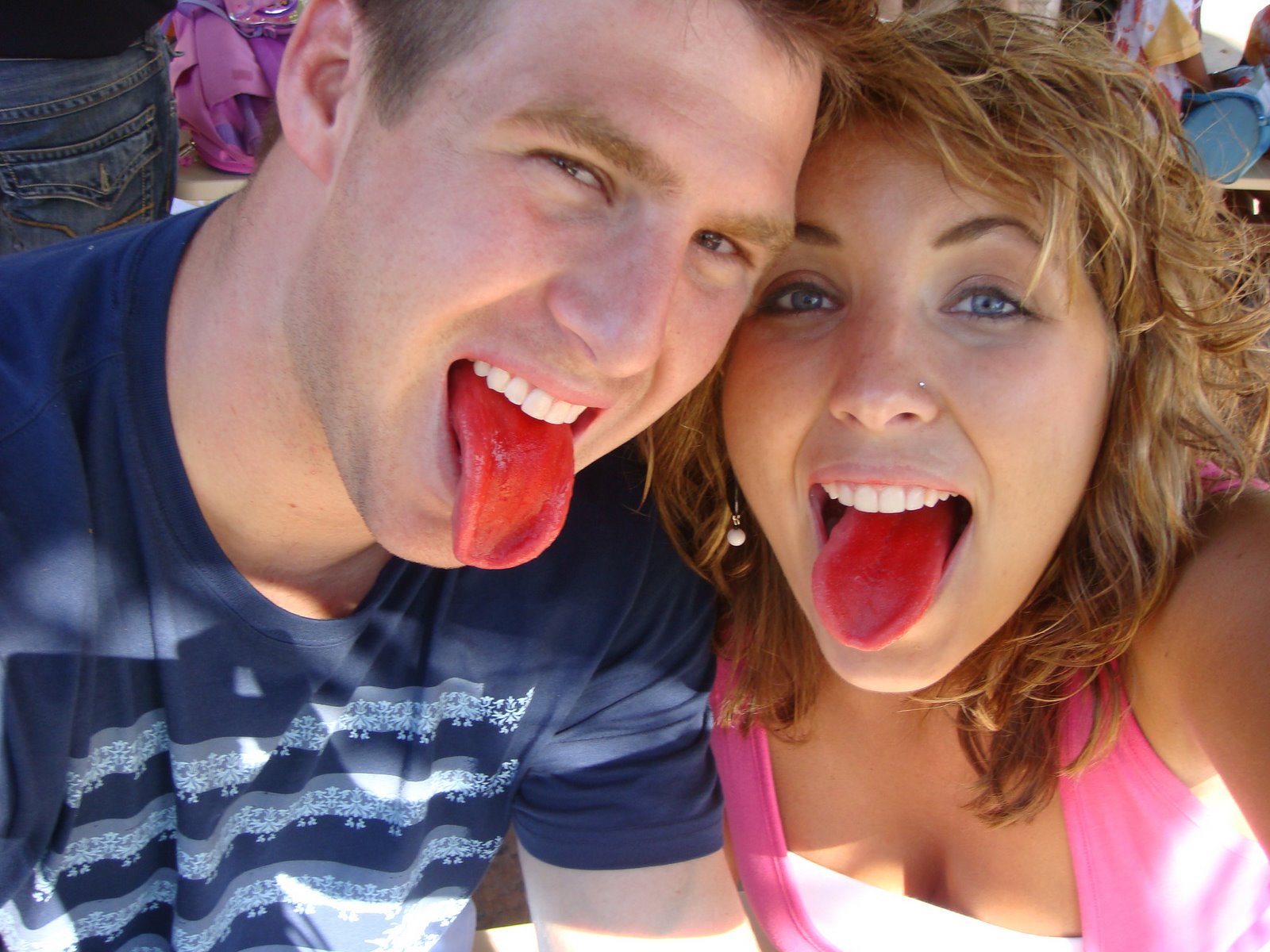 Aflac had some wonderful speakers! Kirk Cameron was the best (more on him in another blog entry) but Zach really enjoyed the Political Breakfast. This married couple spoke and they have complete opposite political views! 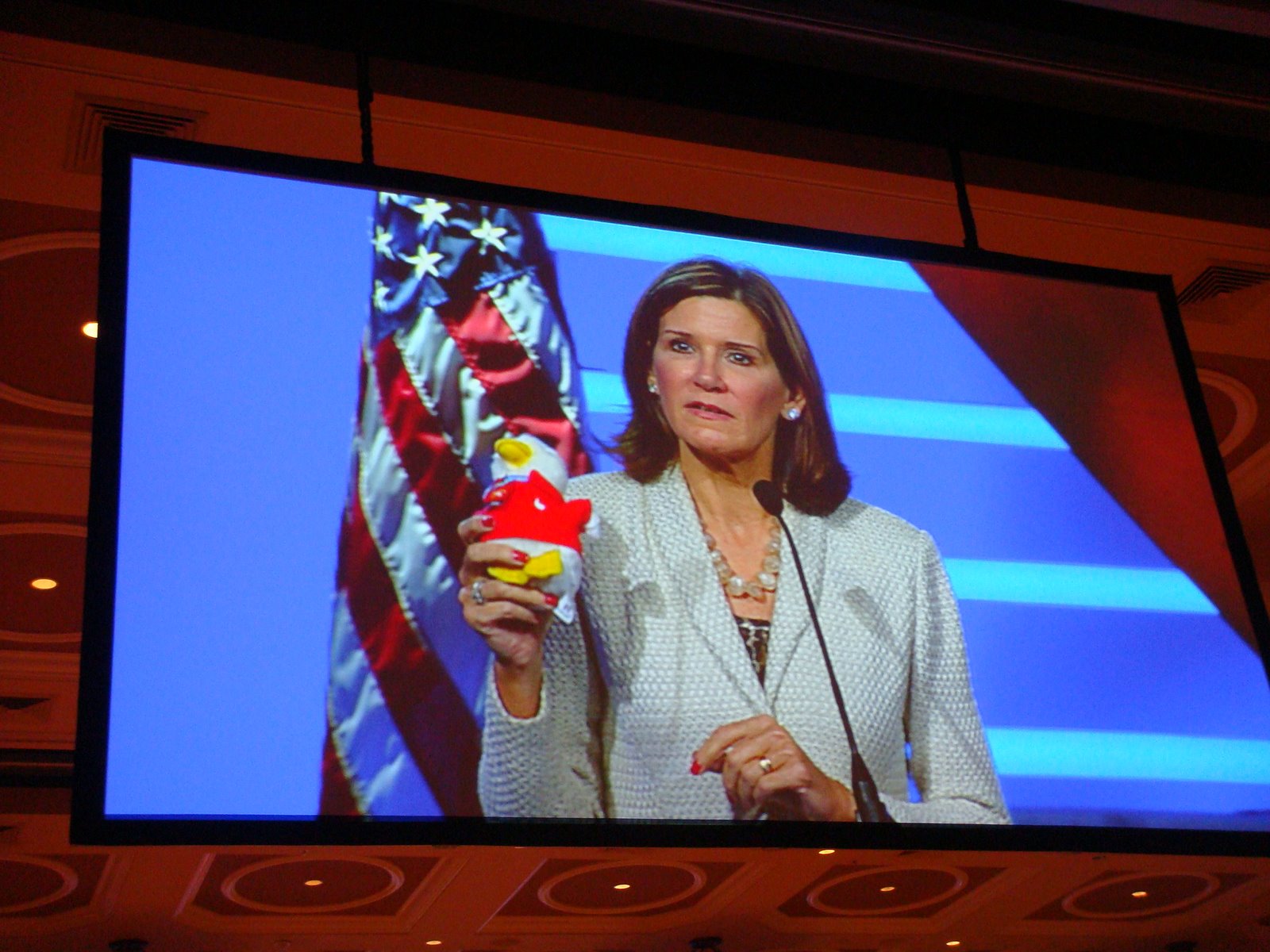 This is Mary Matalin and she is a McCain fan! We each got a republican duck and a democratic one to take home with us (Levi is enjoying his new democrat duck as a toy…haha! While the republican one will have a home in the baby’s room!). 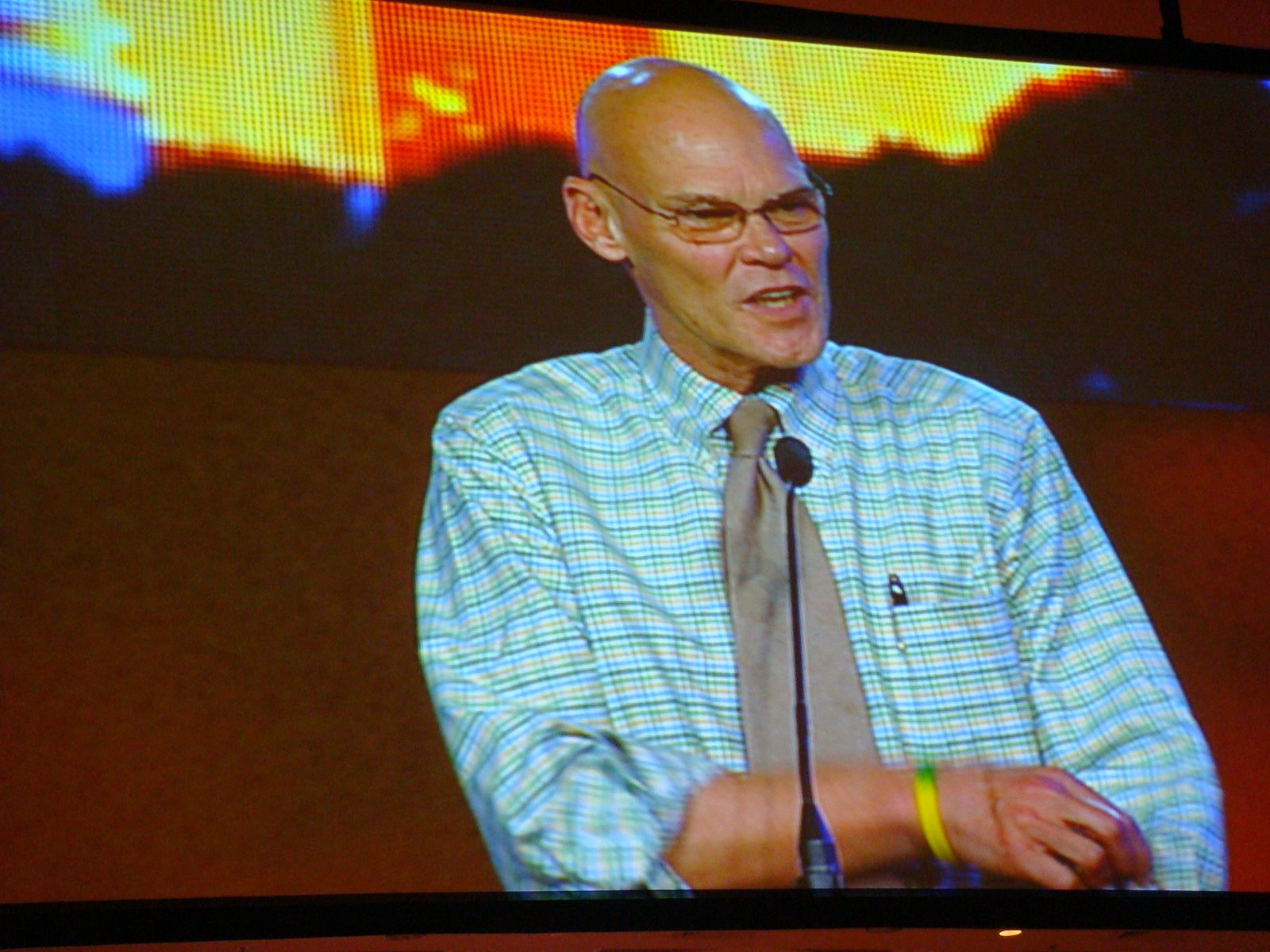 Her husband, James Carville, also spoke and he’s an Obama Man. It was very interesting to hear from both of them as they have both worked with several presidents during their careers! I can’t imagine them being married but they teased each other and laughed about their different views! I’m not that into politics but it was fun and Zach loved it!

The rest of the day was another free time so we rode the San Diego Trolley and went to Old Town. It wasn’t as cool as St Augustine’s downtown area but we had such a fun day together being silly and making jokes! I fell in love with a blue necklace but Zach just isn’t as awesome as a gift giver as I am (just kidding baby! haha). I think we both agree that even though the day’s events weren’t that awesome that our time together made it one of the best days of the whole trip (I know I’m a little cheesy!) 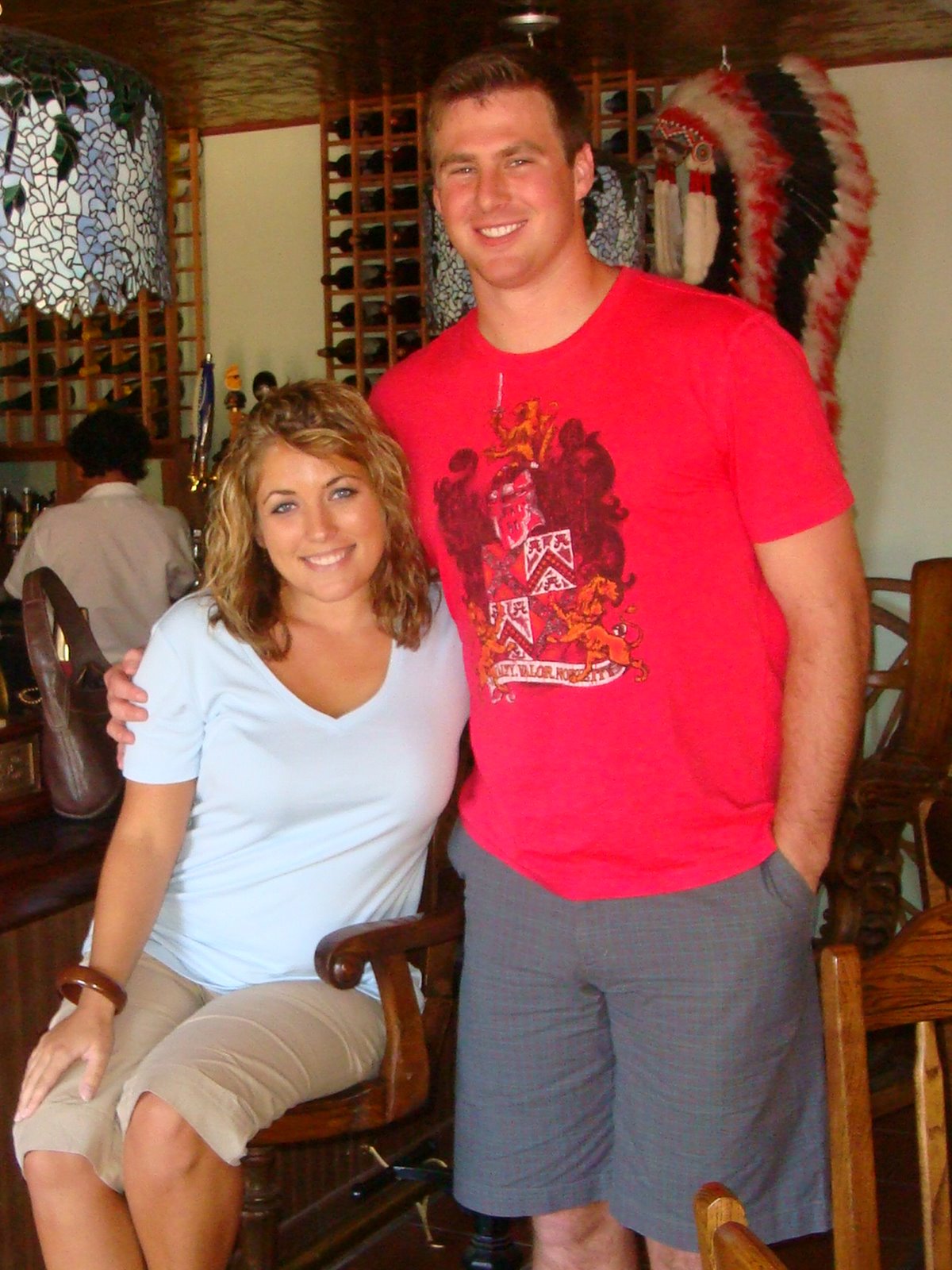 After going on our first big Aflac trip we know how to work it now! From now one we’ll be bringing an extra suitcase because at every meal they give away the centerpieces! We won (or got someone to give us) ALL of them!!! I was pumped but Zach didn’t have fun trying to pack all this stuff! 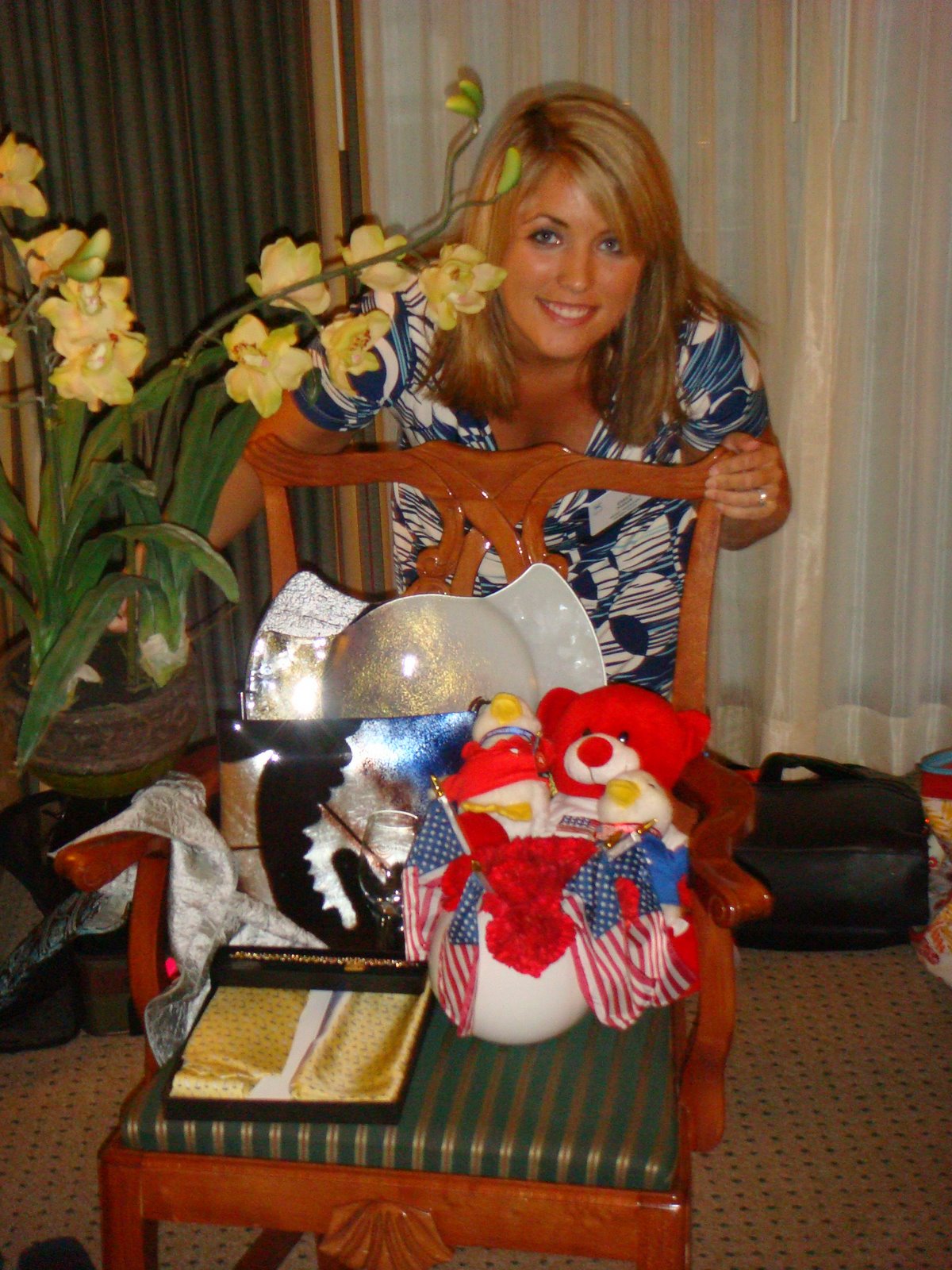 The last night we ate a farewell dinner and the centerpiece was the coolest one of the whole trip. I wanted it so bad but some drunk chick at our table won it 🙁 When I went to use the bathroom all the women were talking about how great the centerpieces were so I joined in and went on and on about how much I wanted it! Some girl whispered to me that she may not want hers and asked for my table number and by the end of the night she brought it over to me! I’m so lucky!!

And yes, all the centerpieces made it home safely 🙂 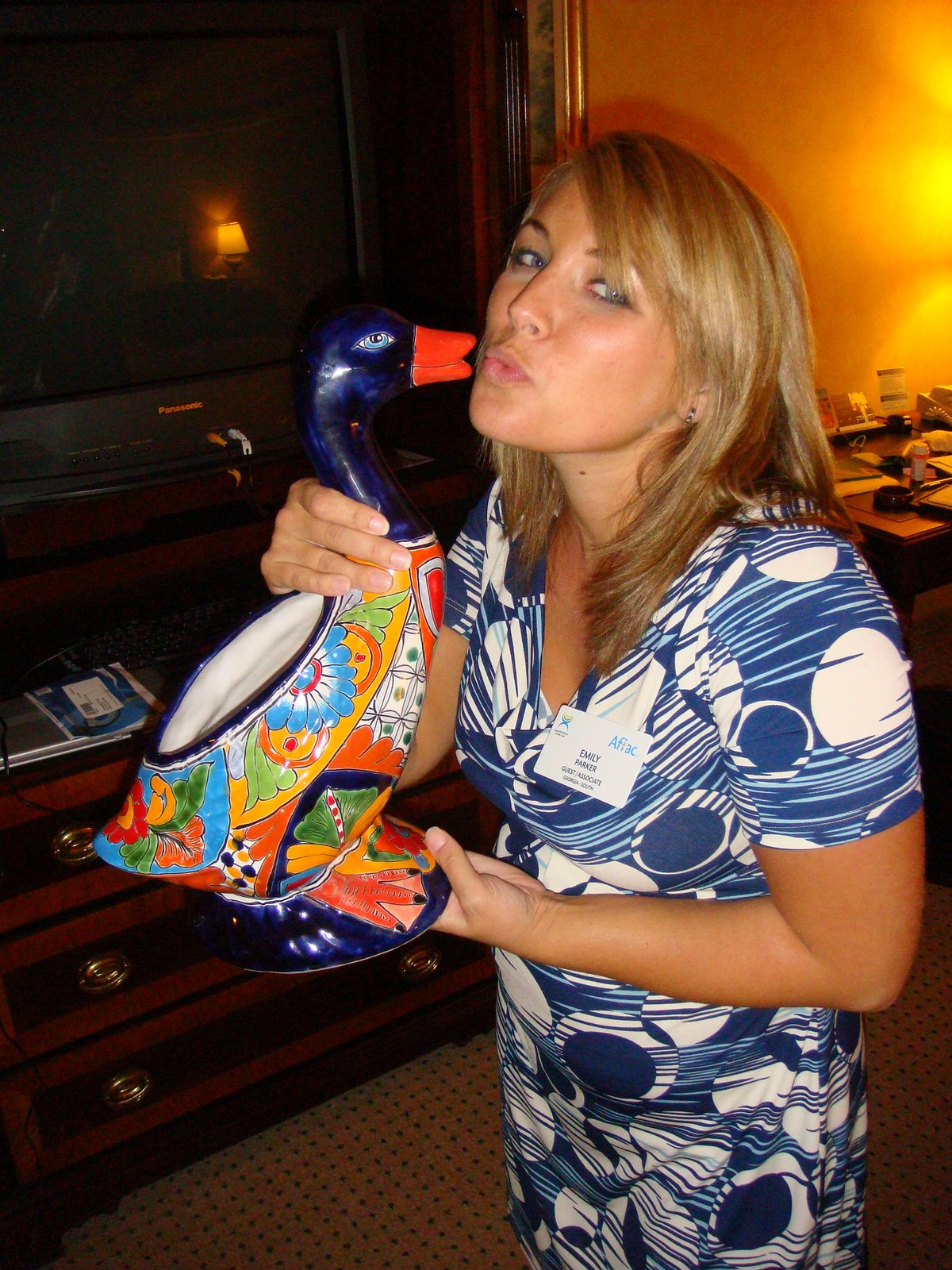 At the Fairwell Dinner we made good friends with an older couple who have kids our age. The “mom” was so sweet! They asked us our baby names and since we won’t ever see them again we told them! It was so awesome getting to tell someone! And they liked them which felt nice! We met another elderly couple at the airport in Atlanta and told them too haha they liked them too and even helped us decide on the spelling for one of them!

Overall San Diego is a great town! We didn’t have any really rude people. We even had a stranger on the street give us $5 when we asked him if he had change. Everywhere we went we met nice people…we even made friends with a couple from New York when we were on the trolley. Surprisingly the town was not as liberal as we thought it would be…there were even two men outside our hotel quoting Romans and saying to keep marriage sacred. We were both impressed with the town, the people, and the awesomeness of Aflac! Can’t wait for New York next year!