After the late night of the Moulin Rouge we were BEAT.

The lack of sleep was catching up to us!

I realized too that when you are home with a baby all day every day you don’t really realize how tired you are.

You have a job to do and you do it!

But being on a vacation away from the baby allowed my tired body to catch up with me.

The whole trip my back hurt worse than ever and I was TOTALLY out of it (more on that in another post…).

So we were tired and decided that while we wanted to see all we could while on the trip that our ENJOYING the trip was more important so we slept the first half of the day on Tuesday.

We walked and got lunch at a little fast food place called Quick then came back to the room to meet up with our tour for our free Aflac activity, a tour of Paris.

We went by the nicest hotel in Paris, the Ritz, which is also where Princess Di stayed when she got in that horrible accident. We also drove through the tunnel where she died…creepy! 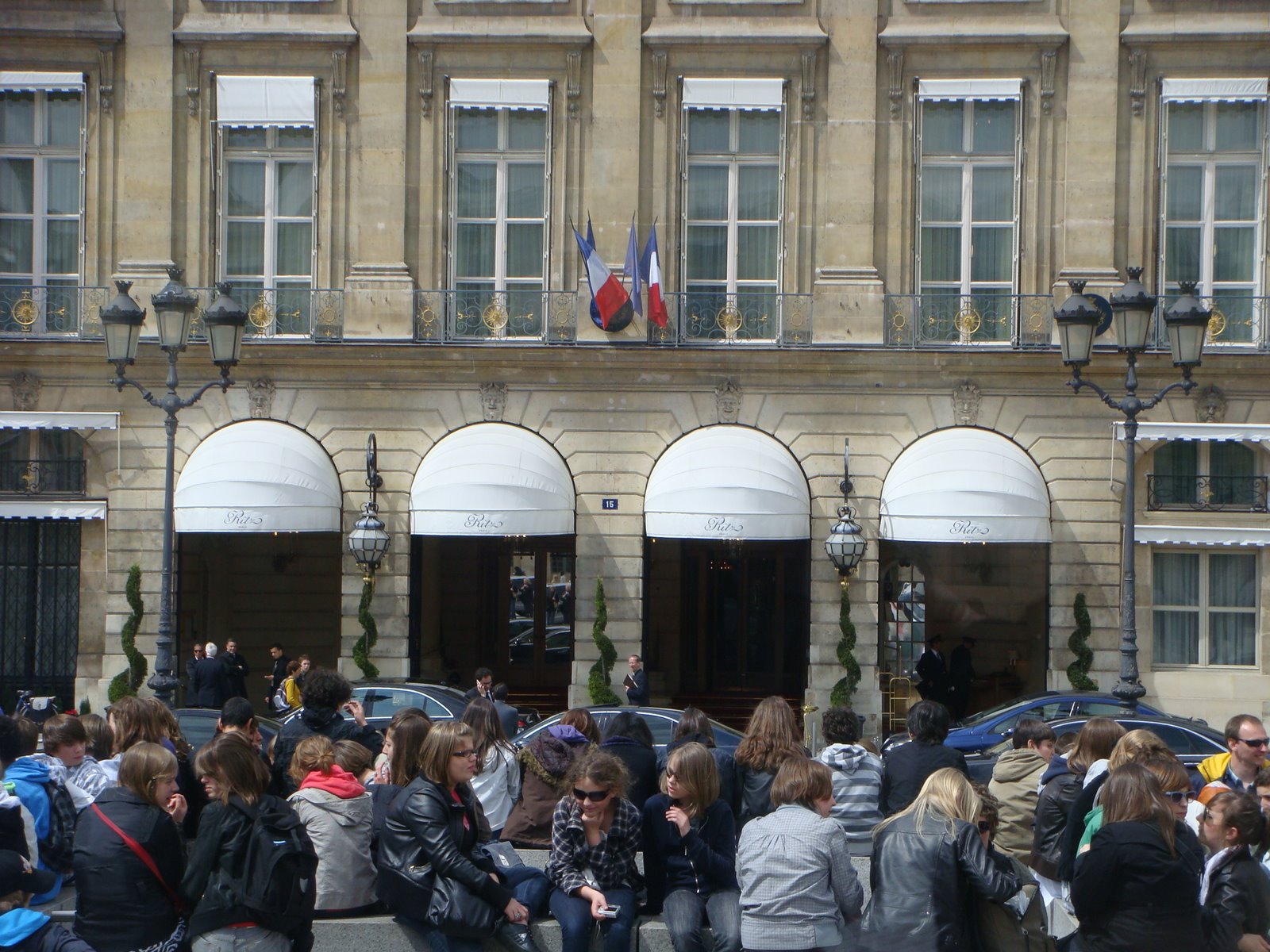 We did learn that all the students in France get to go to college for free and that they throw protests when things happen that they don’t like.

Our bus got caught in the middle of the protest!

The students were on strike and they made it impossible for anyone to take classes so the whole school shuts down…it’s been like that for around 2 years now! 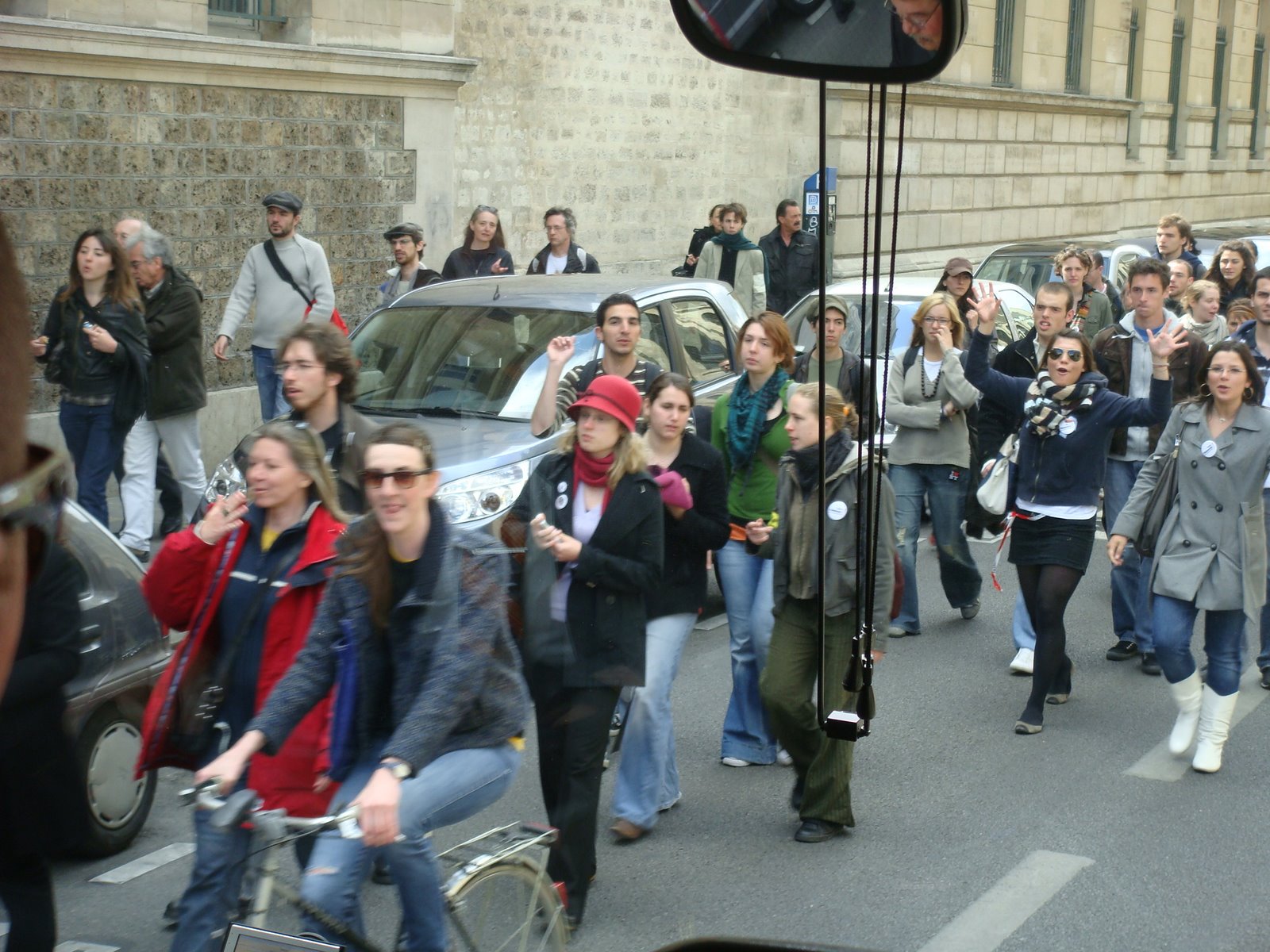 When the students passed our bus they beat on it and everything!

Overall though they seemed pretty peaceful and it was funny that soooo many armed cops were everywhere! 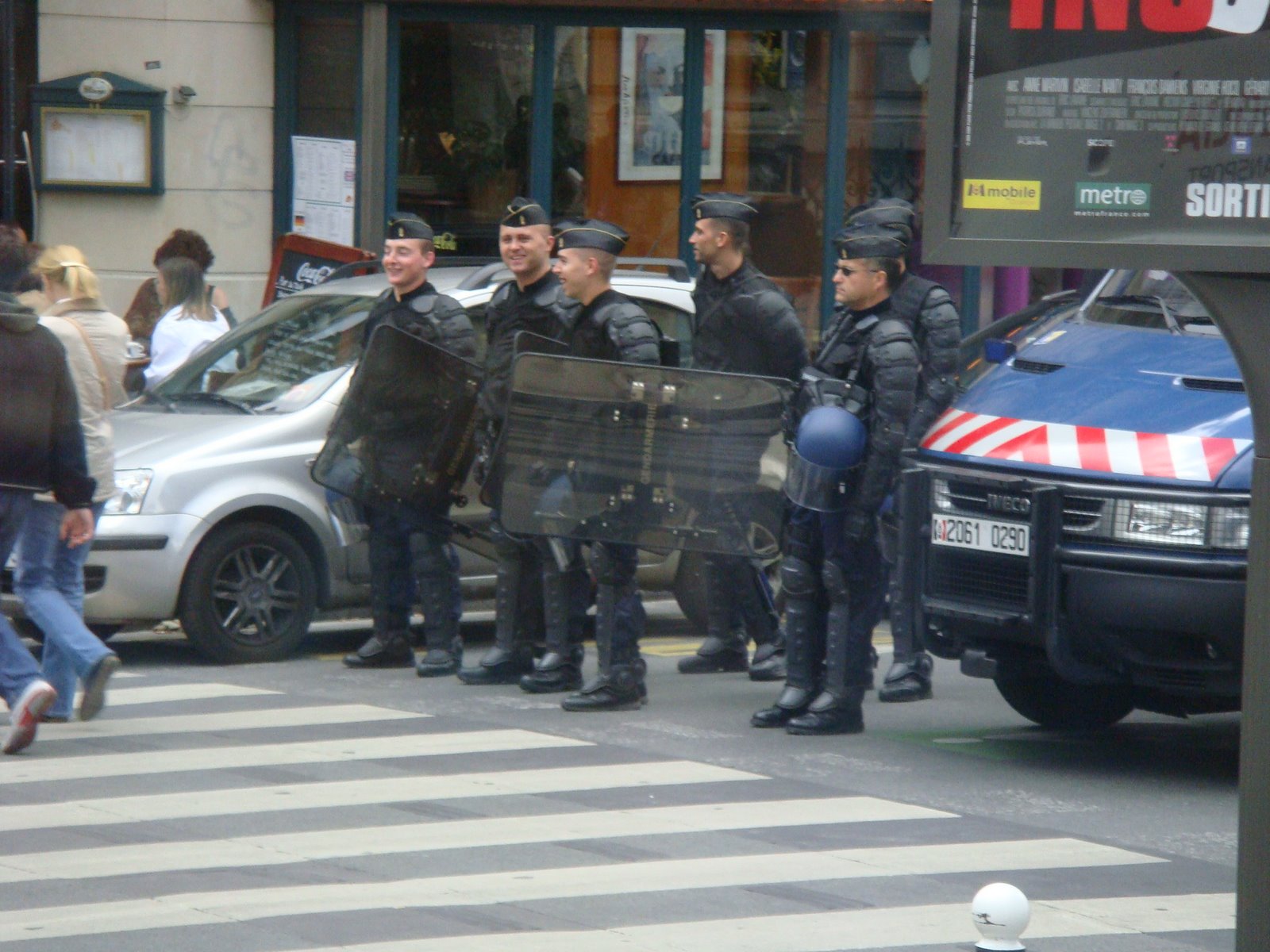 Our tour did take us to a couple good spots to be able to see the Eiffel Tower.

When we went to NYC we were VERY disappointed with how small the Statue of Liberty is…they make it look HUGE on tv and in movies but it’s TINY.

The Eiffel Tower, however, is a MILLION times bigger than we expected! A nice surprise! 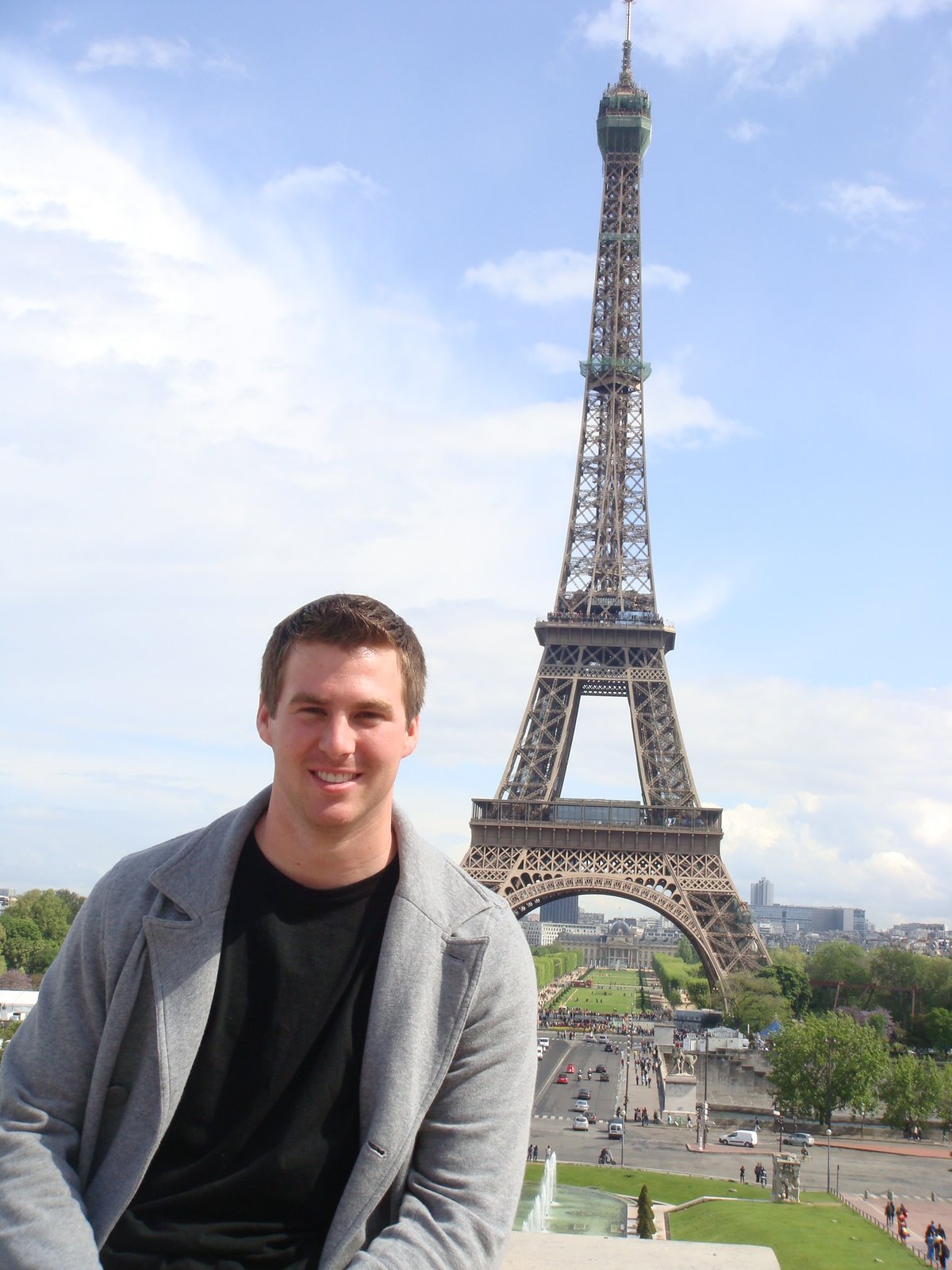 We also learned some stuff about the Eiffel Tower!

It was actually meant to be temporary by the same guy who did the framework for the Statue of Liberty.

It weighs 7,000 tons but only exerts the same amount of pressure on the ground as an average size person sitting in a chair! 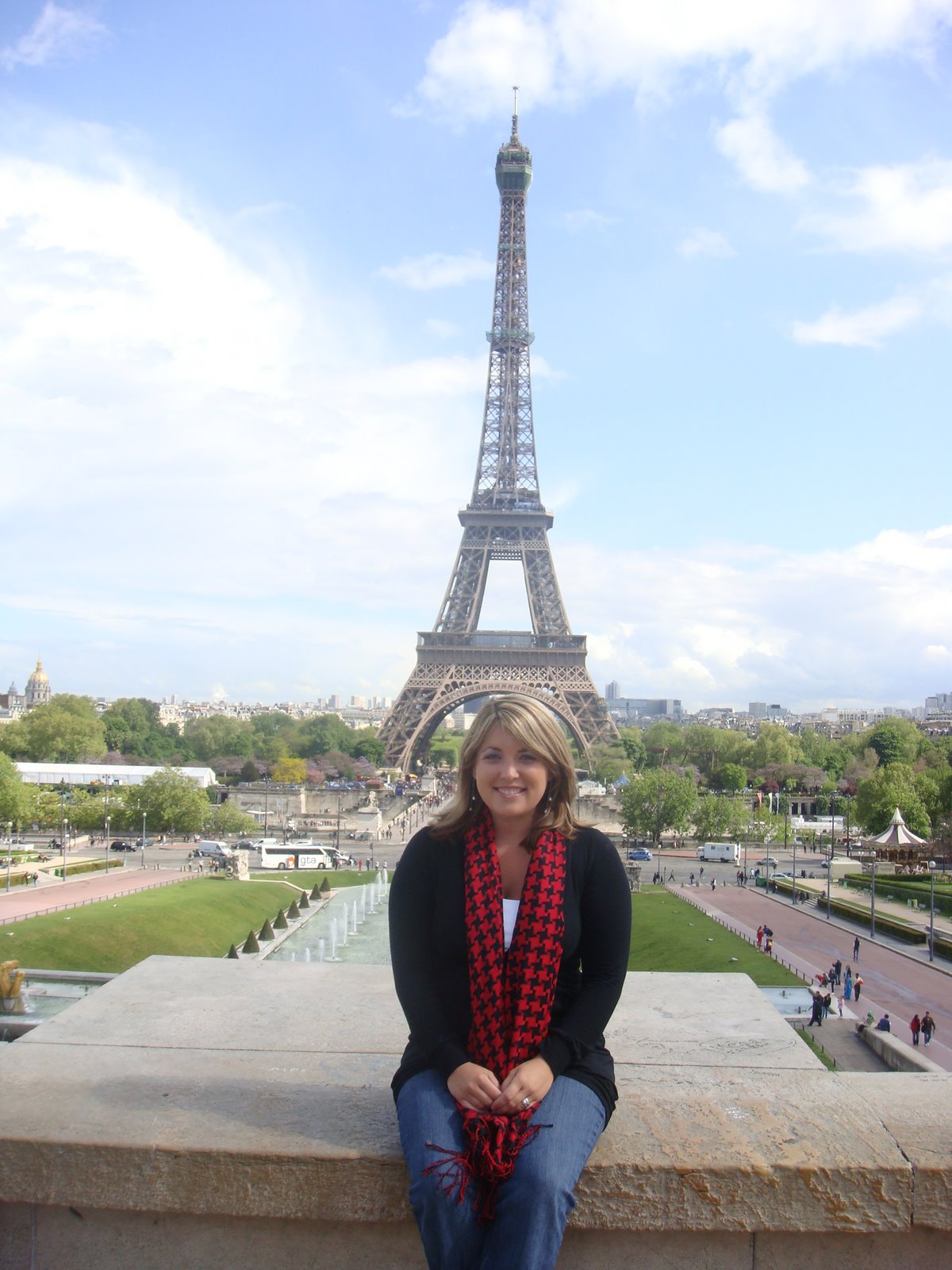 That night we went on our dinner cruise, which was awesome.

Up until that point Zach and I did not feel that Paris is the world’s most romantic city.

There is too much rush rush rush to see it all! I personally think a trip to the beach (coming up in June yay!) is much more our style for a romantic get-away.

However, the night on the dinner cruise down the Seine River was romantic.

If we could have been alone at night and taken walks through the streets we probably would have left thinking it WAS a romantic city!

We got to see so many sights from the water which was neat.

We had some of the best seats on the boat and were able to experience the sparkles of the Eiffel Tower 3 times! (It only lasts for 5 min. each time and I think we figured out that they do it about every 30 min). 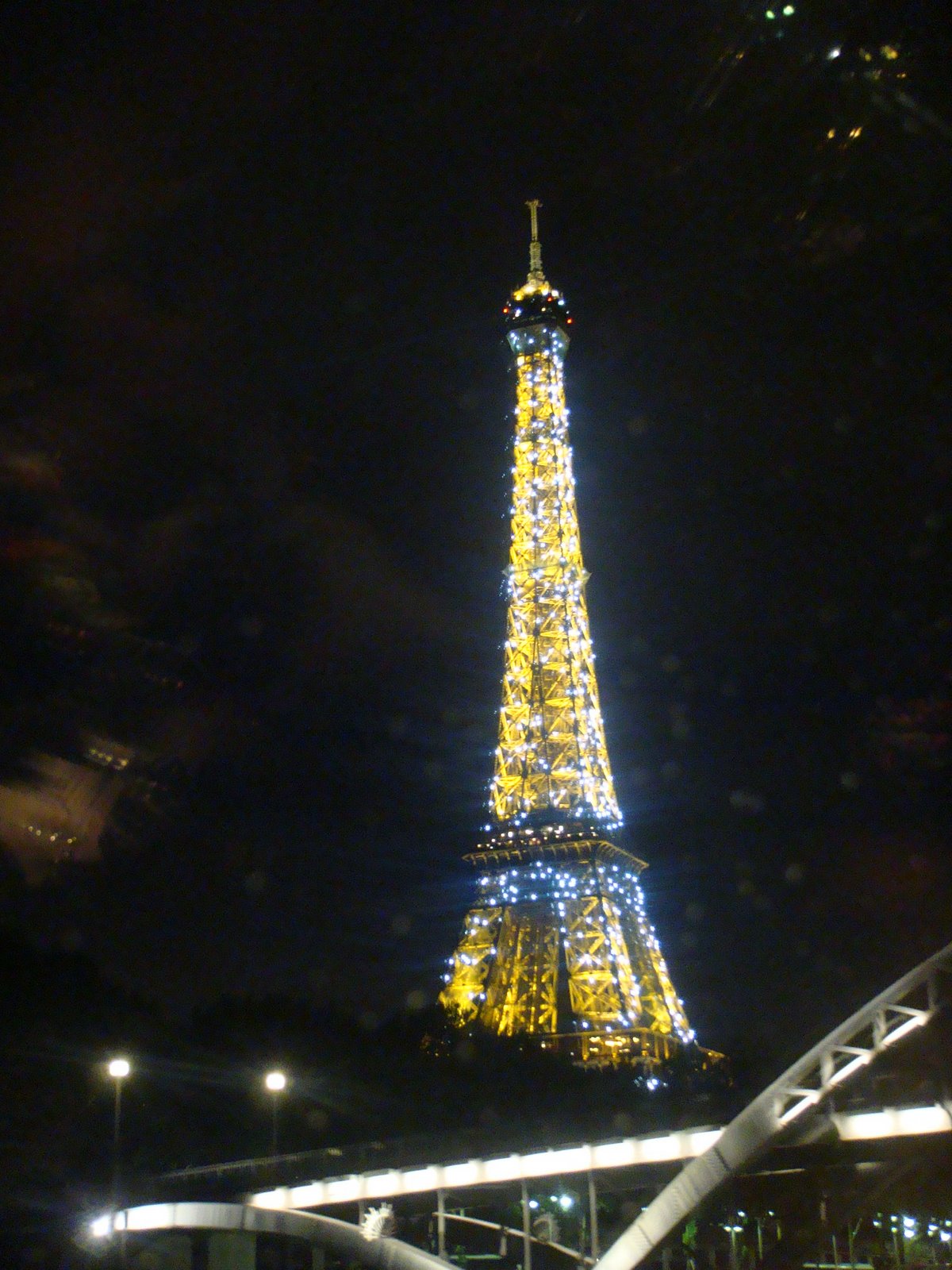 It was so neat to see the Statue of Liberty as well. It was given to Paris in 1885 and it faces towards it’s sister, the original, in NYC! 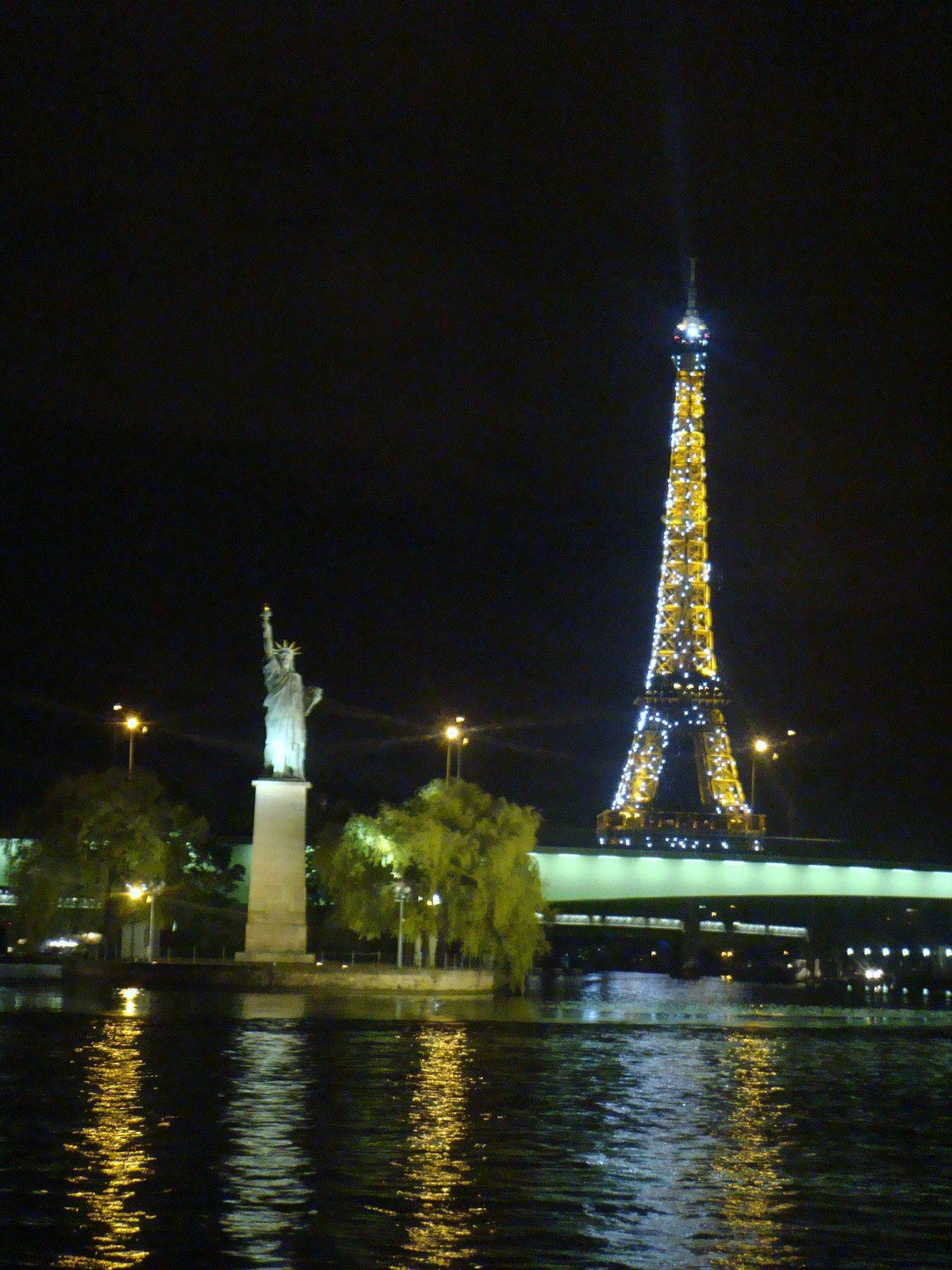 Pictures don’t do it all justice so I took a quick video!

Since we spent Monday morning shopping and Tuesday morning sleeping we had a TON to do on Wednesday!

It was our last full day and we still had the majority of things left of our list to cover.

We mapped out our entire day using the Metro and it felt like we were back at our honeymoon!

We had exactly 24 hours during our honeymoon that we were in NYC so I managed to map out the entire city and we did it ALL!

That’s how our last day in Paris was 🙂 Sometimes I think days like that are the most fun because it’s an adventure!

First stop: the Arc de Triomphe. It was built by Napoleon in 1806 and is home to the Tomb of the Unknown Soldier.

The most interesting thing about it was probably the traffic!

There are 12 roads that lead to the circle and there is no real organization or rules.

Basically, if you wreck, it’s a 50/50 split of fault no matter what happens!

We had to get to the arc through an underground tunnel! 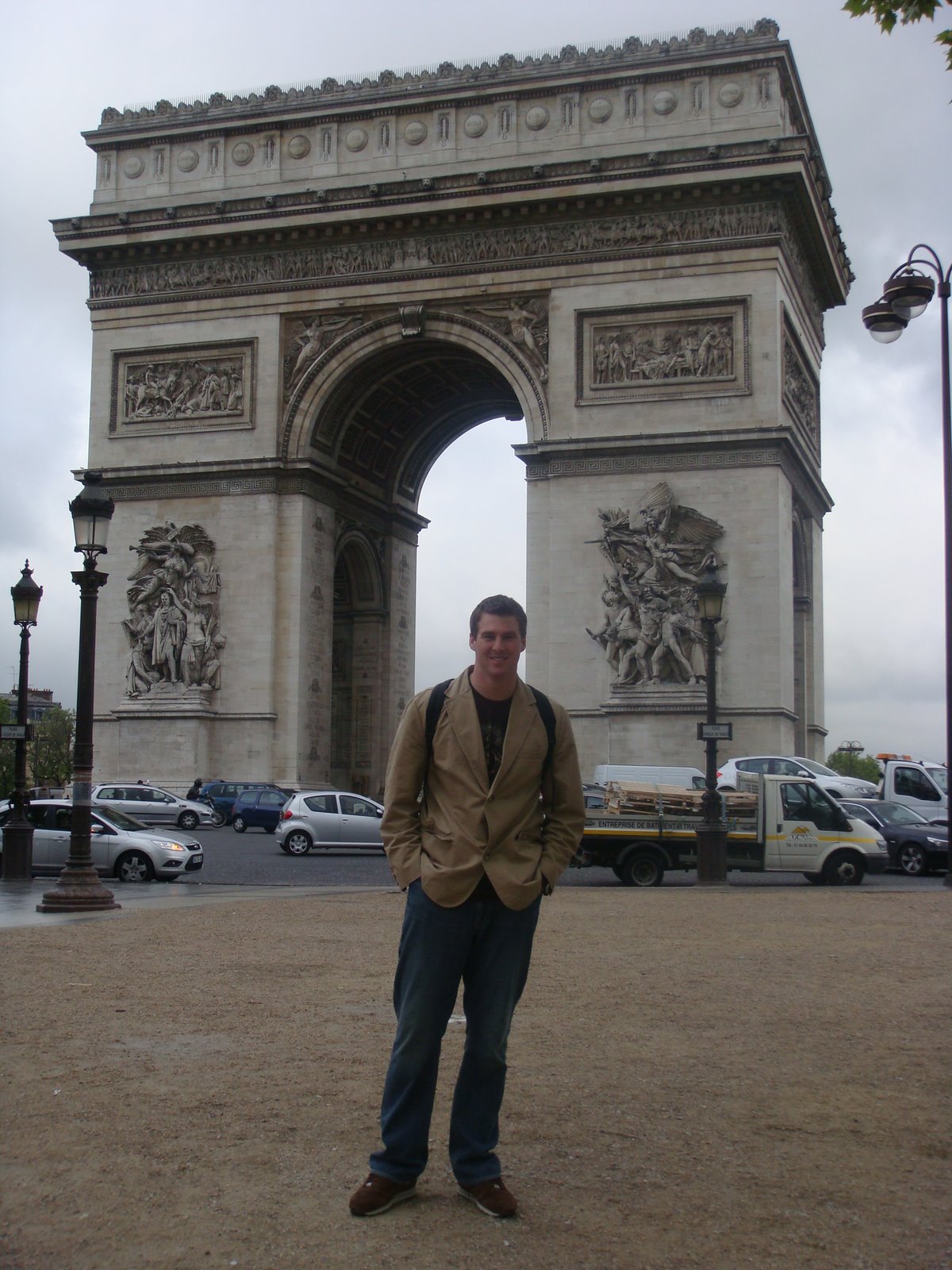 One thing we are SO glad we did is pay the extra 2 Euros apiece to buy our Eiffel tickets from the hotel.

We still waited in line for about 30 minutes, but if we hadn’t had the tickets in advance we would have waited 3 hours…and we got there 30 minutes after it opened!

Here we are at the top of the Eiffel Tower! So Awesome! 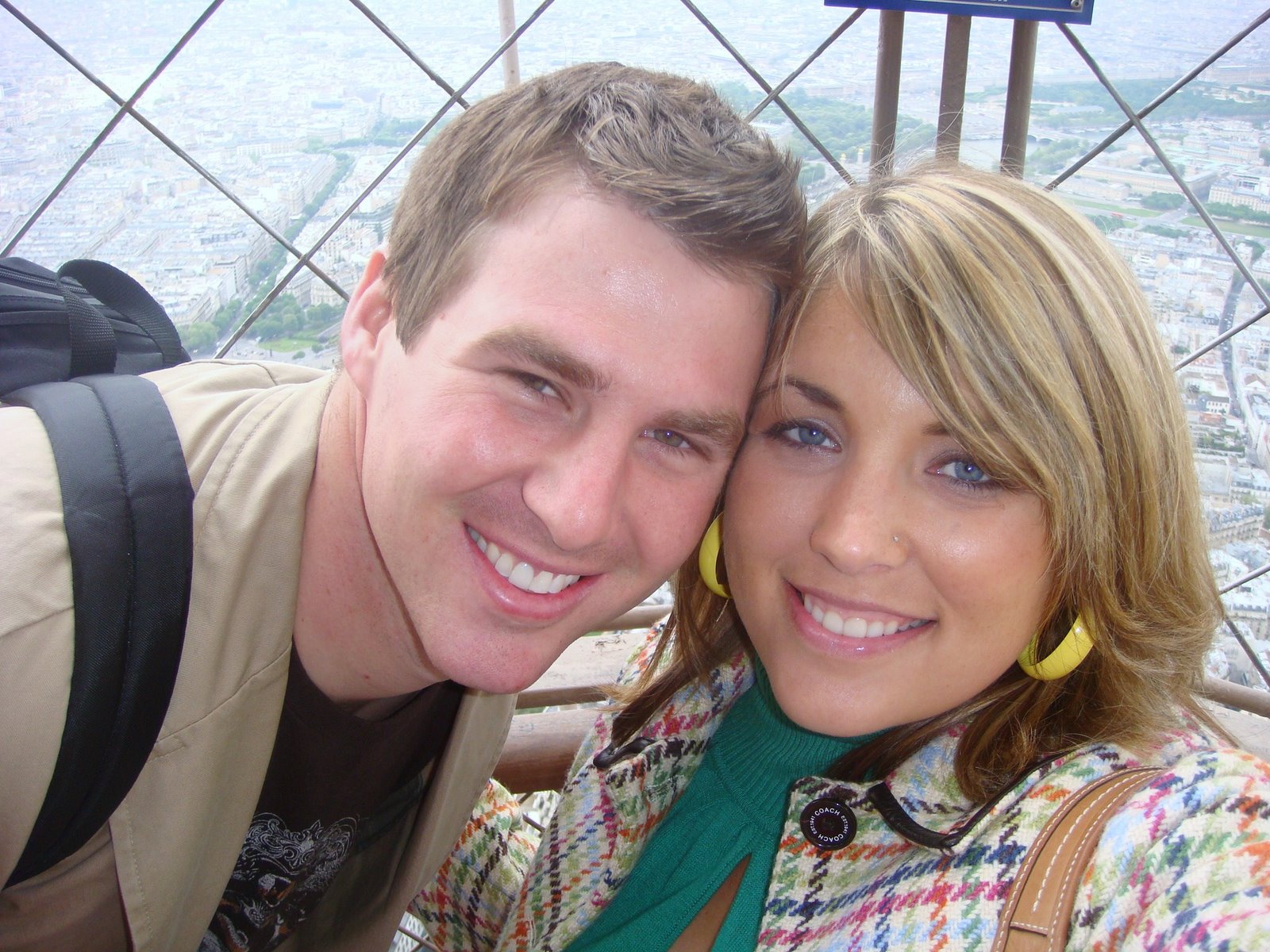 This is a few of the place we had been standing for our pictures the day before! It looks soo tiny! 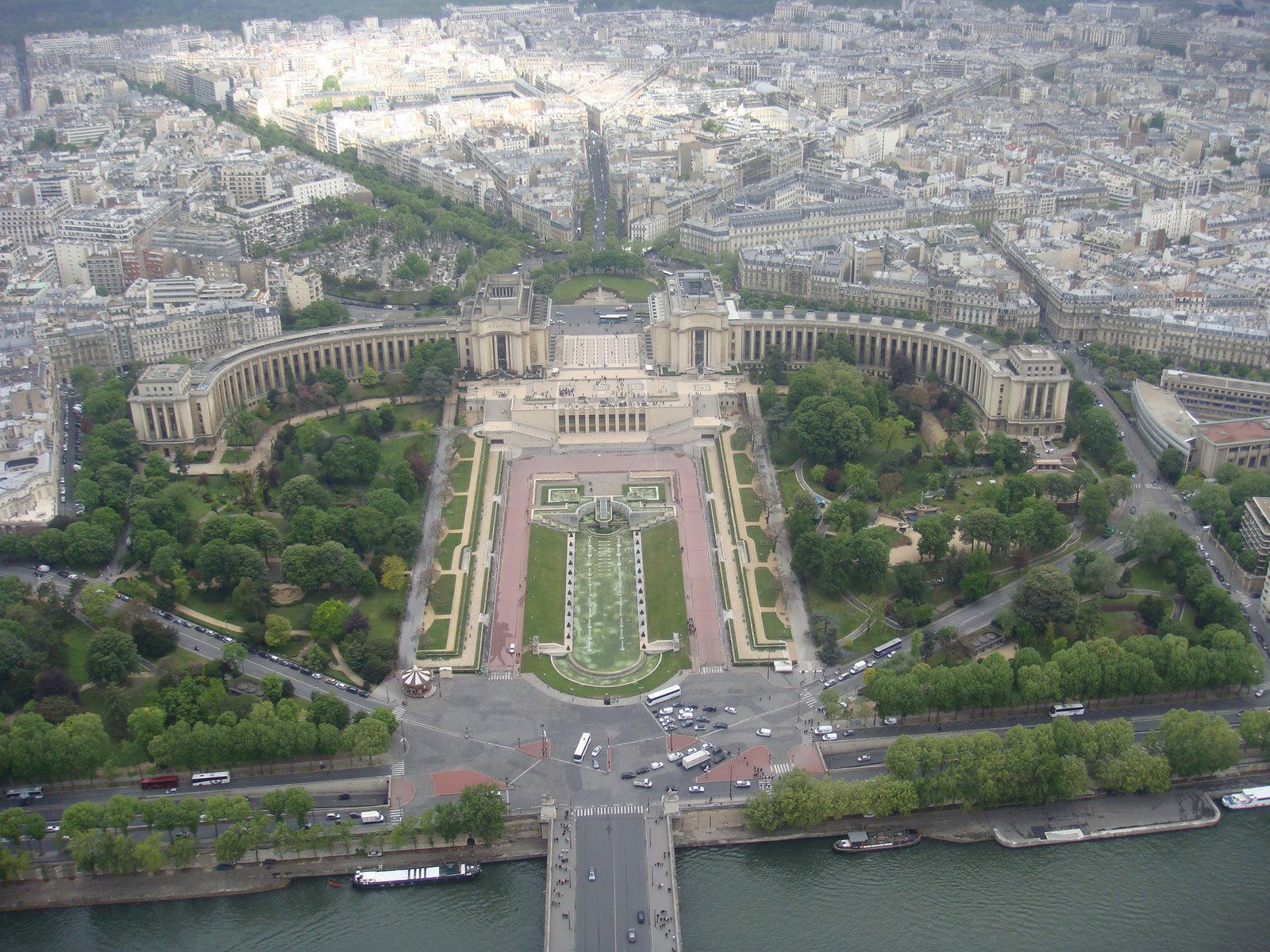 Next we decided to walk to the Hotel des Invalides to see Napoleon’s Tomb. The building was built by Louis XIV in 1670 as a military hospital. 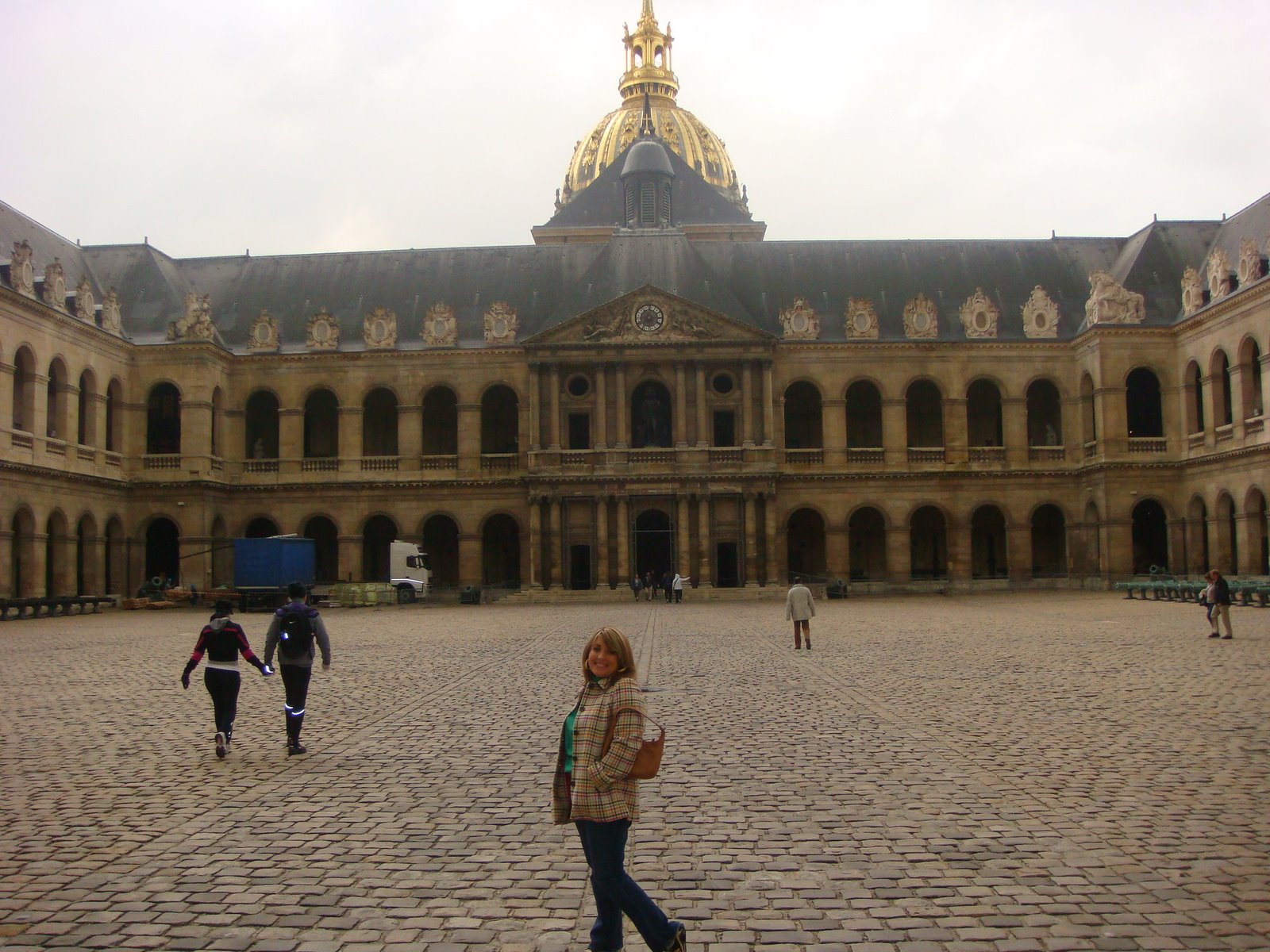 The tomb was AWESOME to see in person. We all know Napoleon was a small man but his tomb is HUGE (It’s behind Zach).

His brother’s tomb is also there…and his dead body was given to France as a gift from Hitler! 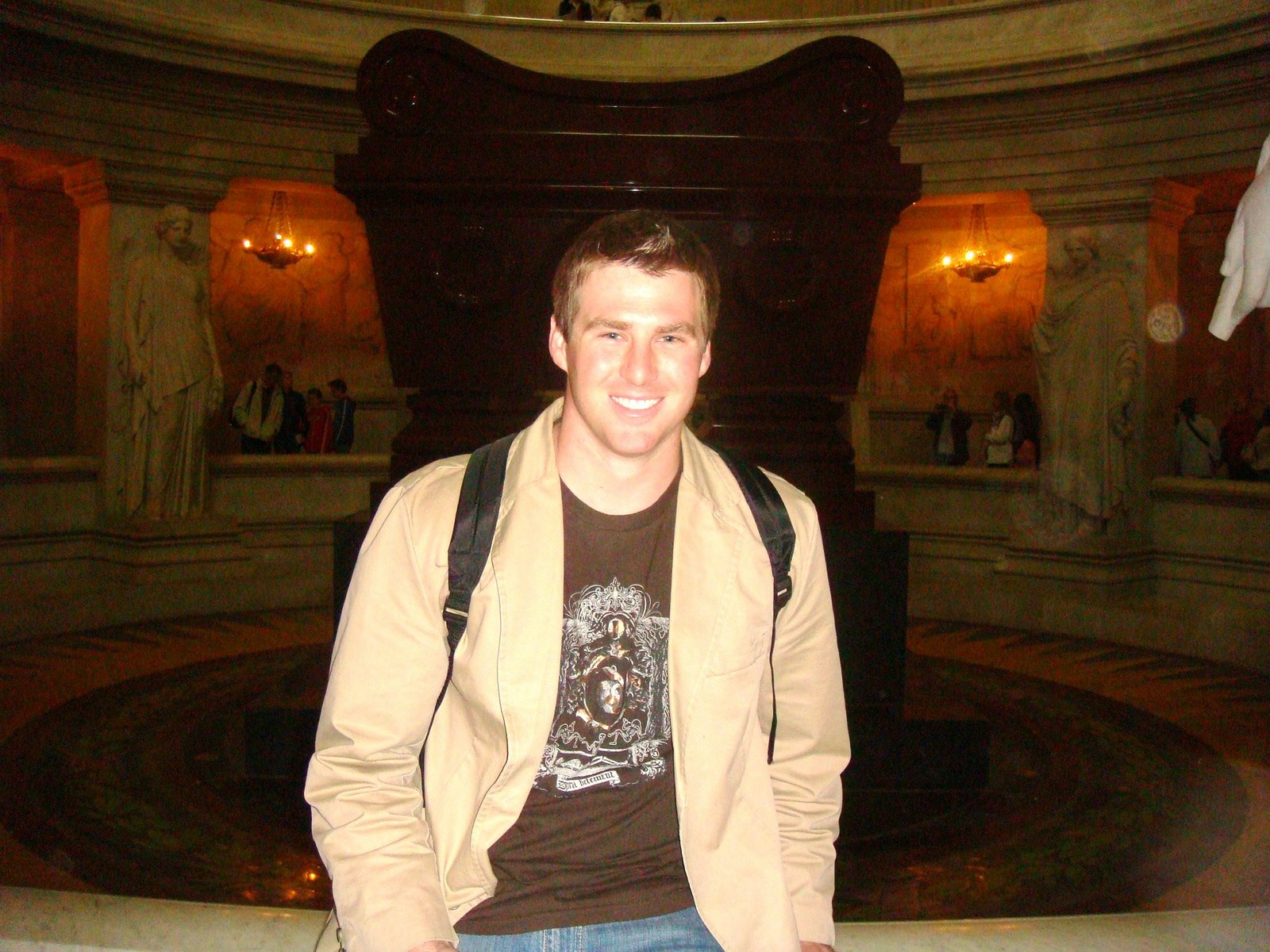 I was glad to be back on the Metro after our looong walk.

Even with the language barrier we were able to get the thing down pretty quickly.

You’d be surprised how NICE people in France are! Most of them can speak English!

We greeted everyone with a “Bonjour!” then asked if they spoke English and usually they would be able to speak a little and would help us.

The only rude people? Bus drivers, bathroom workers, and waiters…but isn’t that how it often is in the US too? 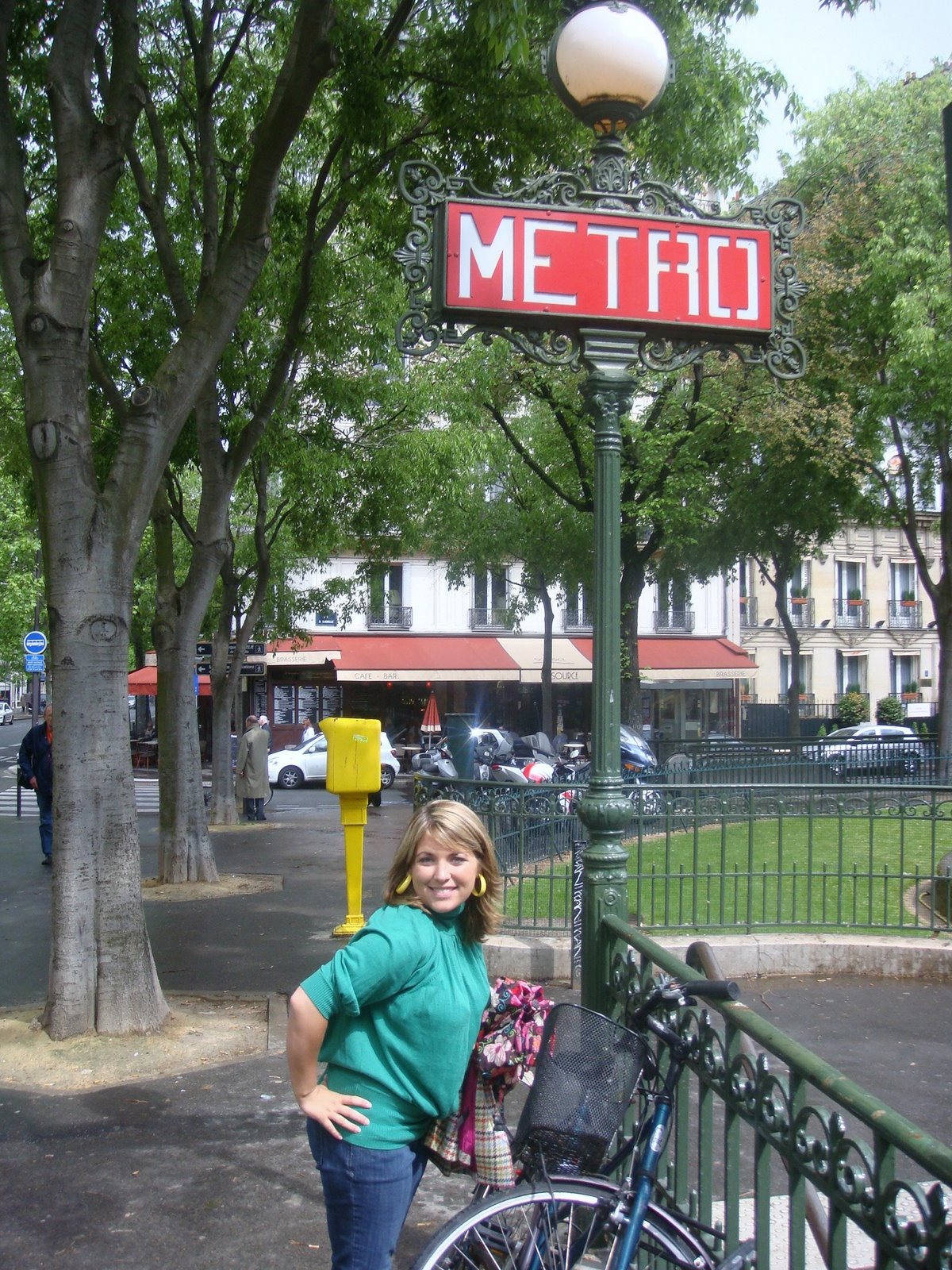 Before going on any trip I always research on Trip Advisor the best things to do wherever we are going. One of the things it suggested was to go visit the Catacombs.

It’s a series of underground tunnels with the walls lined with human bones and skulls!

Back in the 1700’s cemeteries were being uncovered by rain and such and so they decided to give the bones a new home in the catacombs!

Creepy creepy, but kinda cool to get to see dead bodies I guess…

I’m pretty claustrophobic so I was more nervous about the stairs leading down into the tunnel than I was the actual dead people! 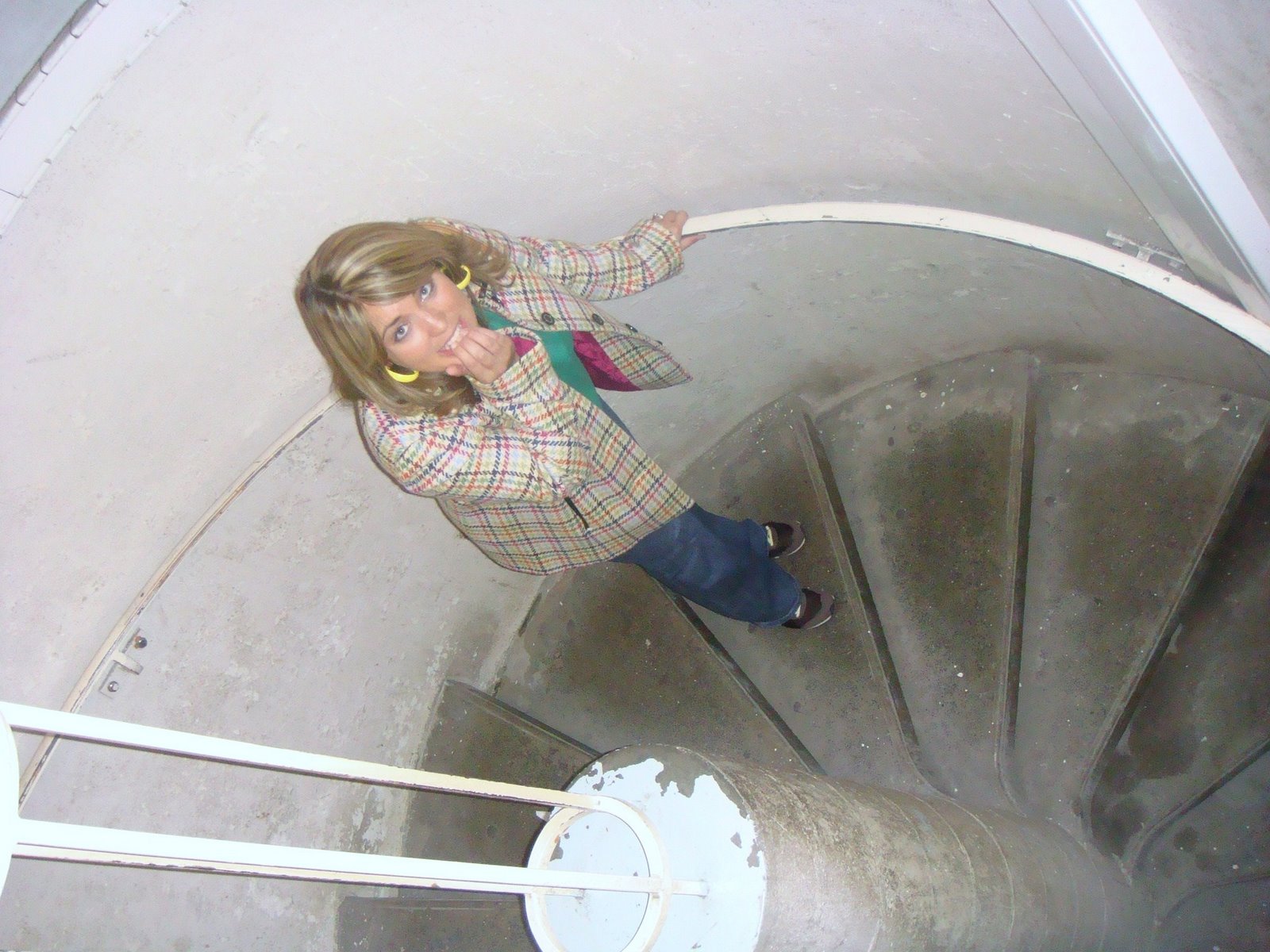 And Zach’s biggest issue was that the ceilings were SO low! 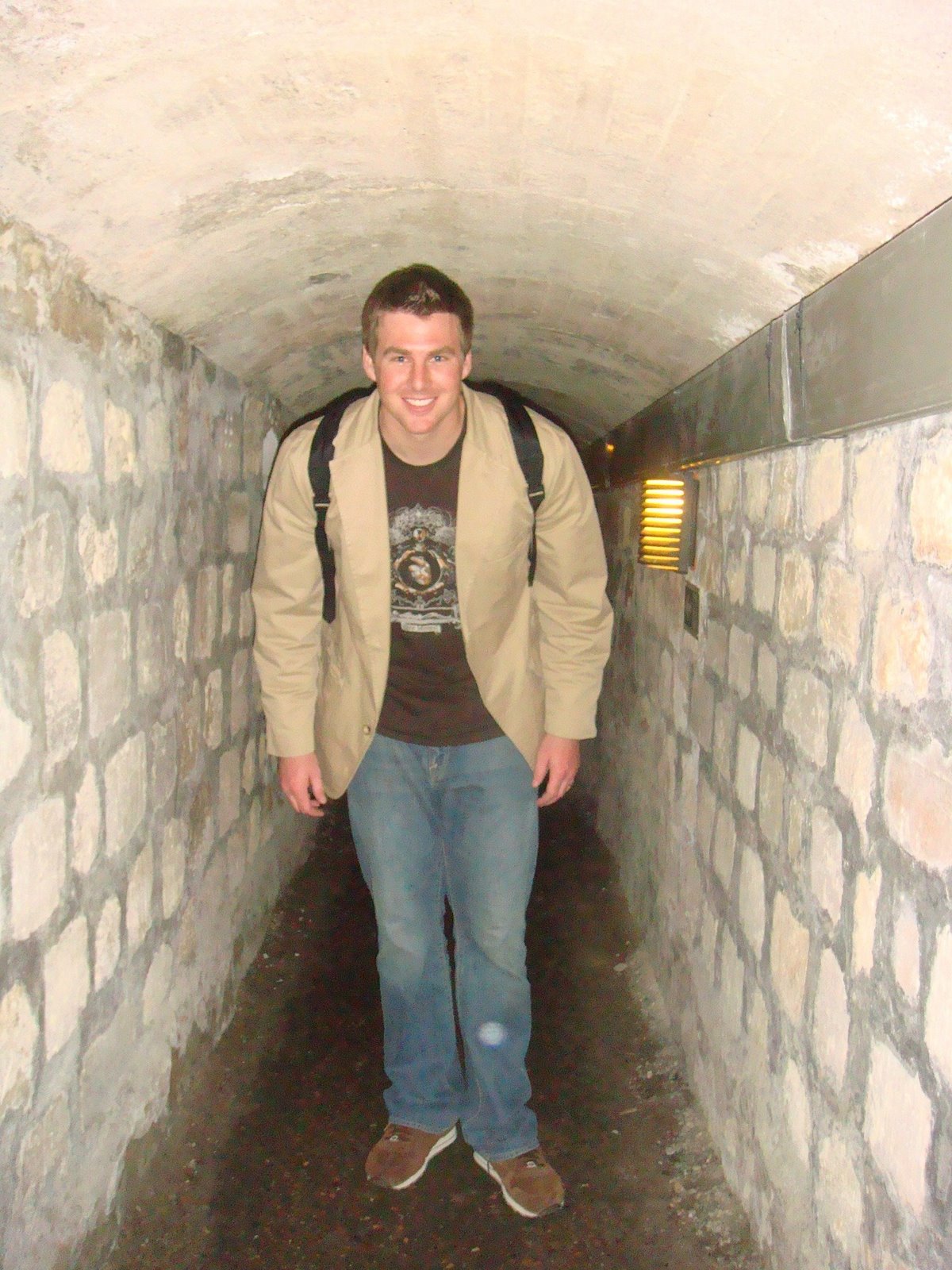 It only took us about an hour and a half to walk through the whole thing, I think what made it so fast for us everywhere is that we don’t know any French!

None of the little fact things were in English anywhere! So even if we wanted to know more about something we couldn’t, this was true everywhere we went and it shows that France is not really all about tourists.

Their stores even close at like 6 and NOTHING is open on Sundays!

Me with the dead people! 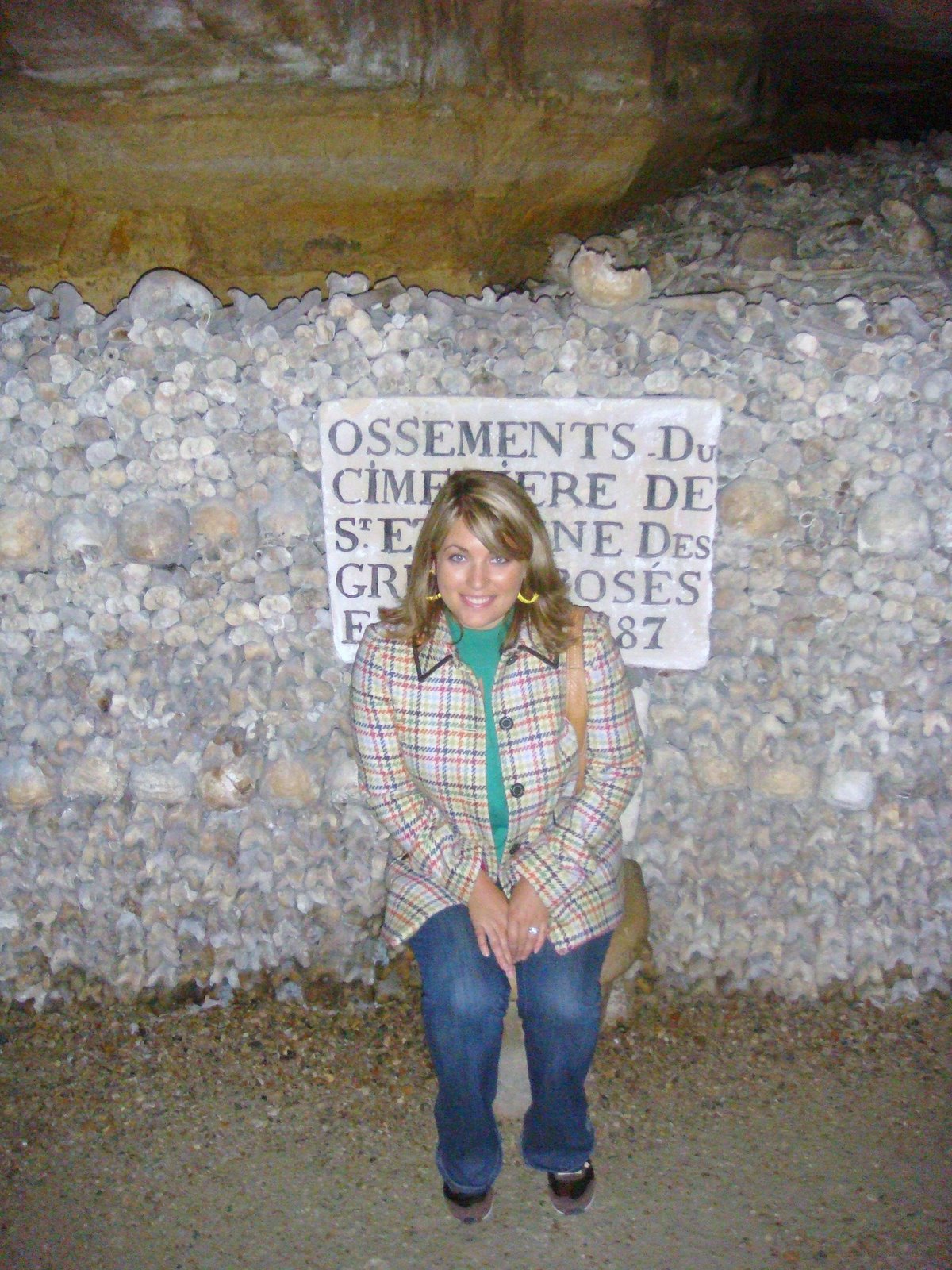 To end our day we headed back to Notre Dame, planning to climb the towers, but decided against it. We wanted to be able to just walk around a little bit and pick up some souvenirs (Z got a shirt, we got a magnet for our fridge, got Kye a plastic plate to use someday, and I got three summer scarves that everyone was wearing over there).

We did stop for some ice cream that was supposed to be the “world’s best” but I wasn’t impressed. I’ll stick to my American Ice Cream thank you! 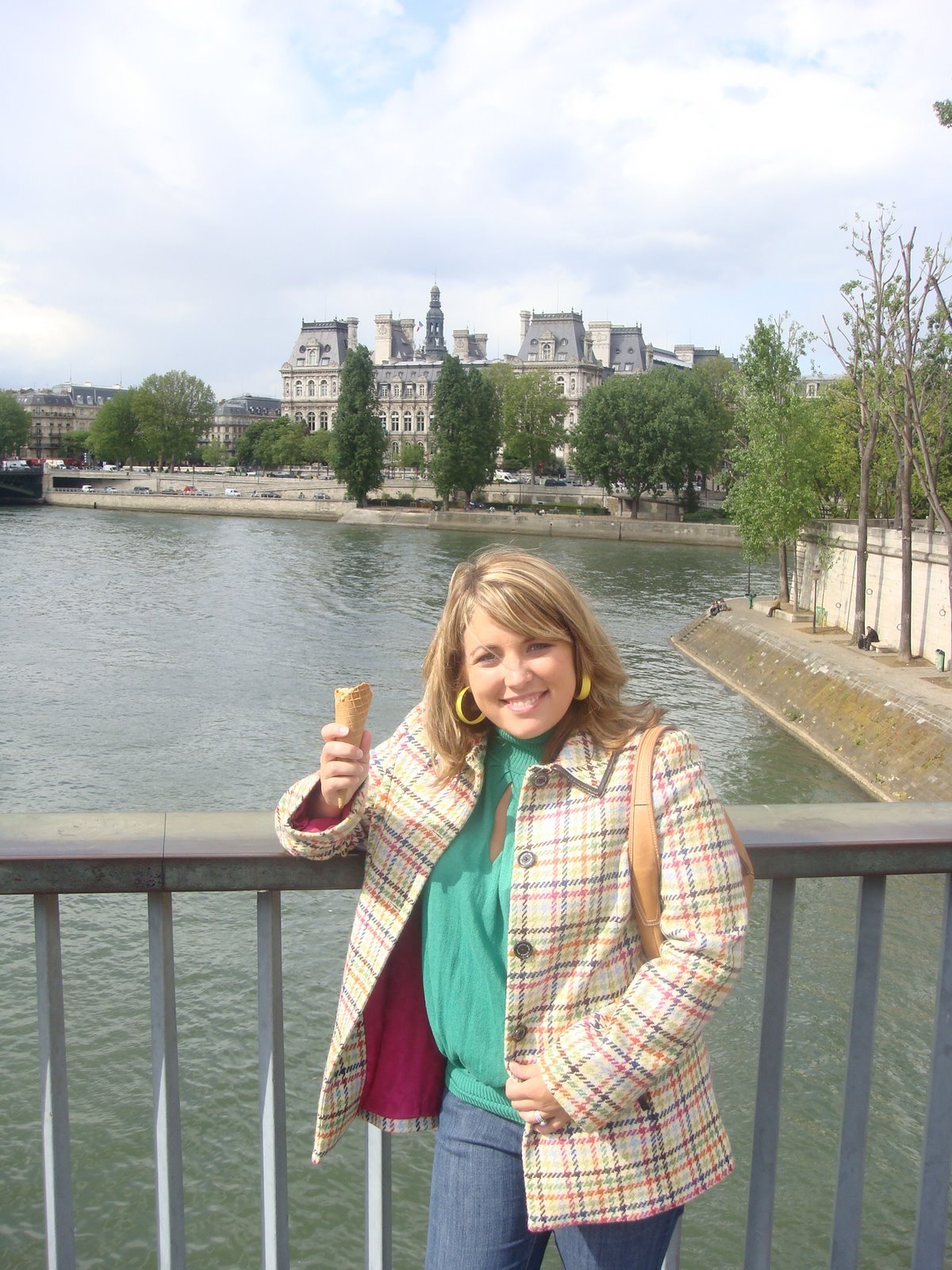 Our last night was the Aflac Awards Dinner and it was nice for Zach to be honored as one of the top 85 associates in the nation!!!

I’m so proud of him and I think this awesome trip motivated him to make top 85 again in the future!

This year’s trip is a cruise so it’s okay if he doesn’t make it, I know with a new baby and this rough economy he probably won’t but maybe next year 🙂

Overall we enjoyed Paris…will we go back? Probably not.

We saw all we really needed to see in one trip but we did decide the next time we go to Europe with Aflac that we will save up a bunch of money so we can hop from one country to the next and we will go back to France to be able to visit Versailles as we just didn’t have enough time!