From the beginning the swaddle has been a wonderful sleep tool for our family! Kye LOVED it and it really helped him to be able to sleep. I don’t know what we would have done without our Swaddlemes! The first couple of weeks of Kye’s life he was too small to use the size Small ones we had and it was tough to swaddle him the old fashioned way with blankets. He did great once the Smalls fit and then came the day when he fit into the biggest size they have. I bought 2 cotton ones and one fleece one thinking that we’d mostly use the cotton ones and guess what? Kye only liked the fleece one! The poor kid would be SO sweaty but hey he slept great! 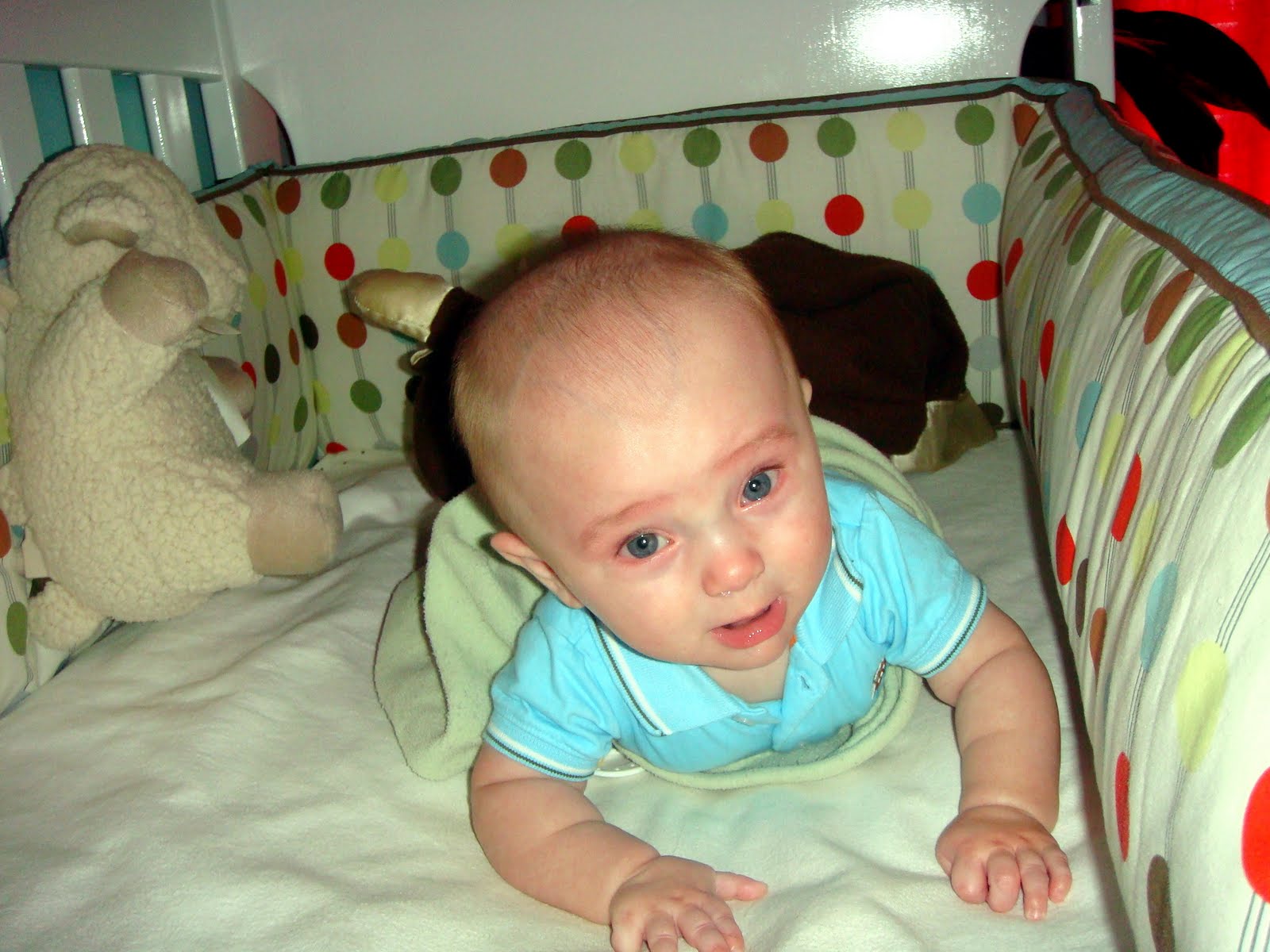 For the last month or so my gut has been telling me that it’s time to get rid of the swaddle but I’ve been too afraid to let it go. I worried that he wouldn’t be able to sleep without it! So instead I spent his entire second half of each nap going in and out of his room to re-swaddle him because he kept breaking free. I thought that since he was breaking out of it that it meant he wasn’t ready to be without it because he would stay awake once he broke out instead of going to sleep. I now realize that he was awake BECAUSE he was swaddled and he wanted to be free so he worked and worked to bust out and then was all hyper and couldn’t settle back into sleep.

(First time in a sleeper to go to sleep!) 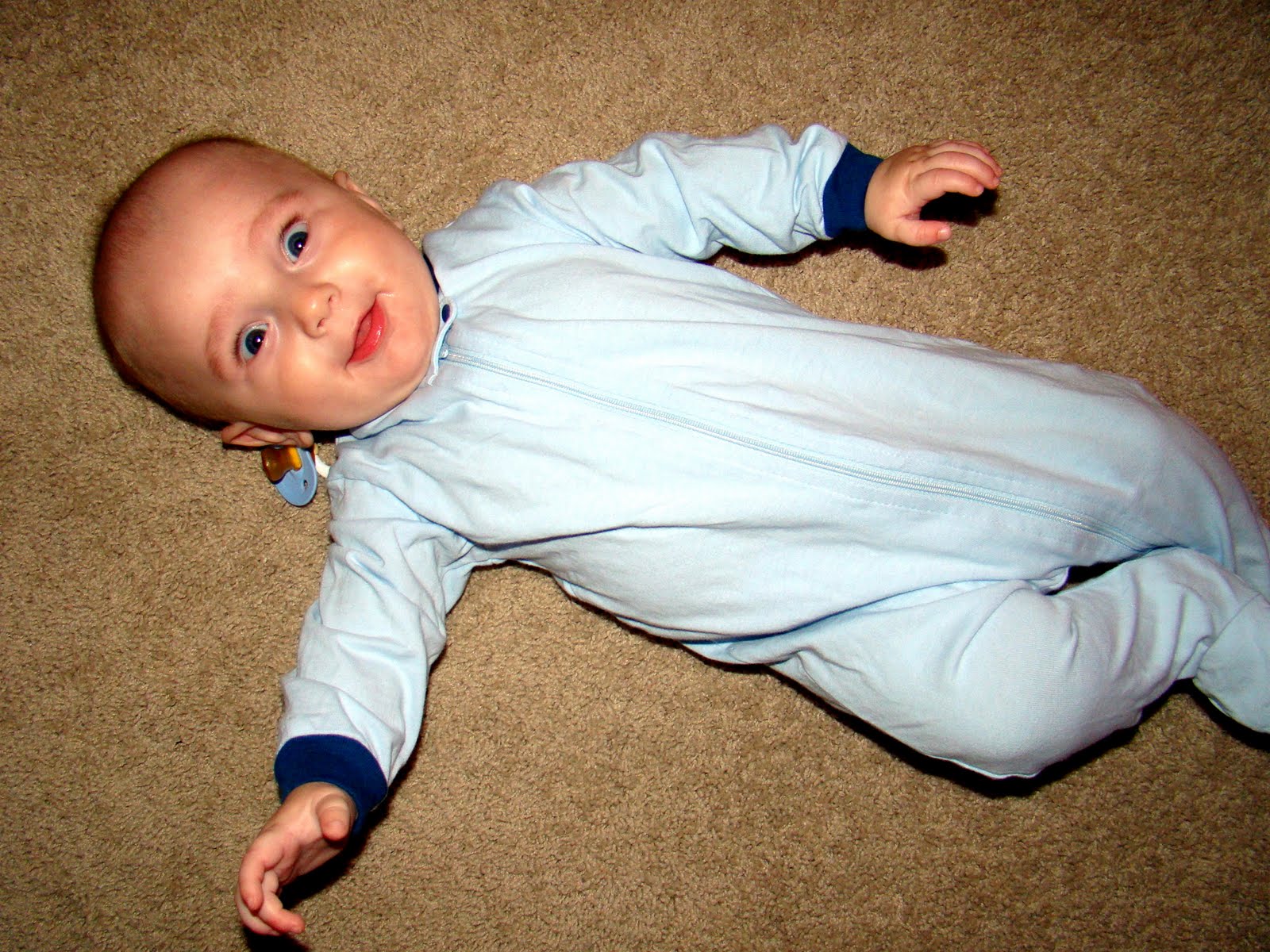 Zach and I decided to try him with one arm out for awhile and see how that would go. It worked great and I read in Parents magazine that after a couple of days with one arm out that you should go ahead and take away the whole thing! Well we’d been doing one arm out for over a week! The moment came on Thursday morning last week when I looked at Kye’s sleep positioner and saw that instead of being white that it had turned a nasty brown color. Since Kye would only sleep with the positioner and the fleece swaddle there wasn’t enough time between naps to wash them so they were NASTY. 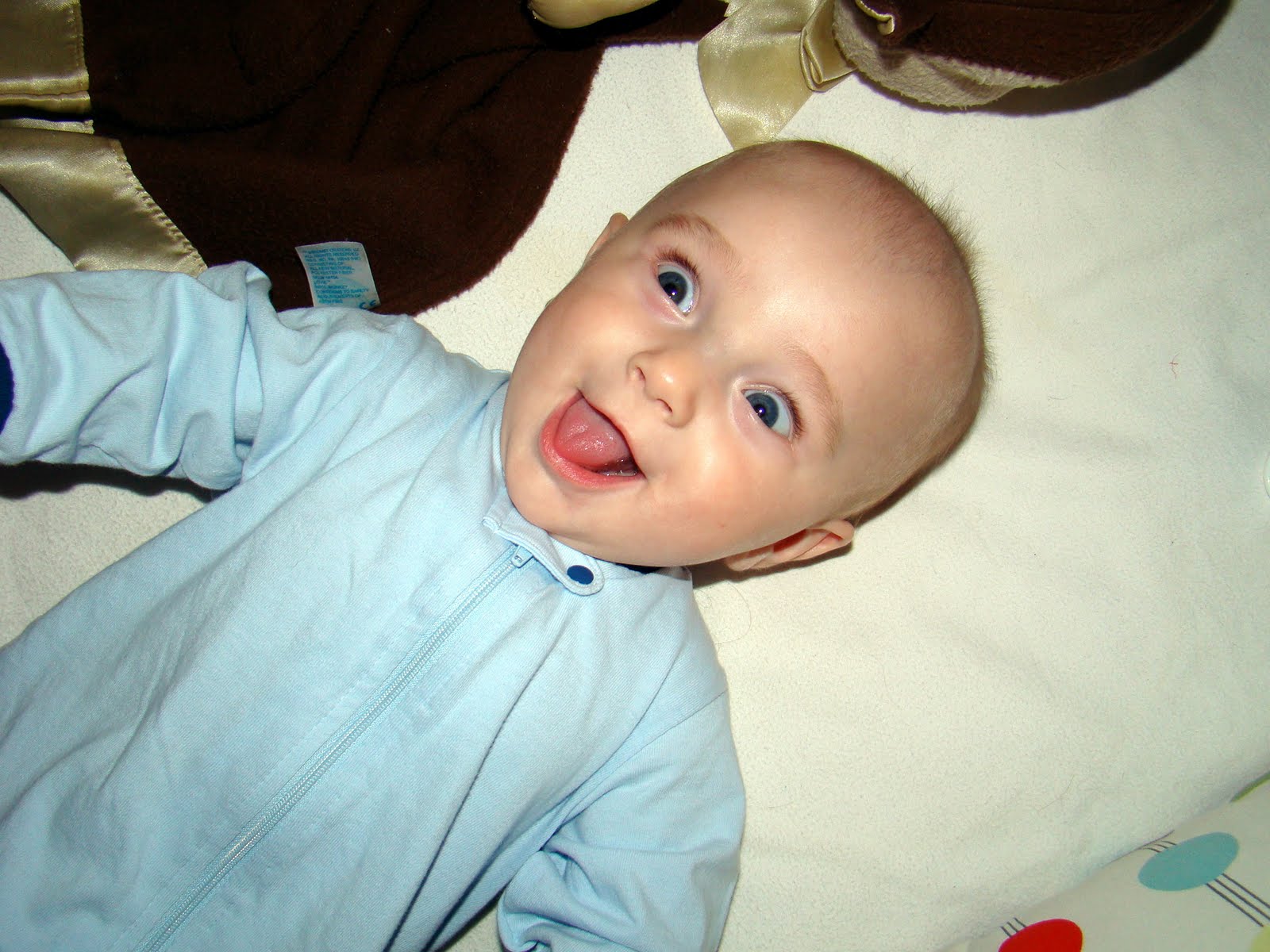 I decided to put him in zippered sleepers for his naps and at night as it keeps the routine the same as when we swaddled him and it’ll keep him warm. I was a little nervous putting him down for his first nap without it, but it went great!!! He loves to cover his face when he sleeps so we decided to give him his monkey. I was worried about SIDS issues so I called the manufacturer and they said it’s the safest baby blanket on the market and that a baby can’t get suffocated by it. I put it up to my face and yup it’s breathable! My mom is a pretty smart woman buying that for her grandson 🙂 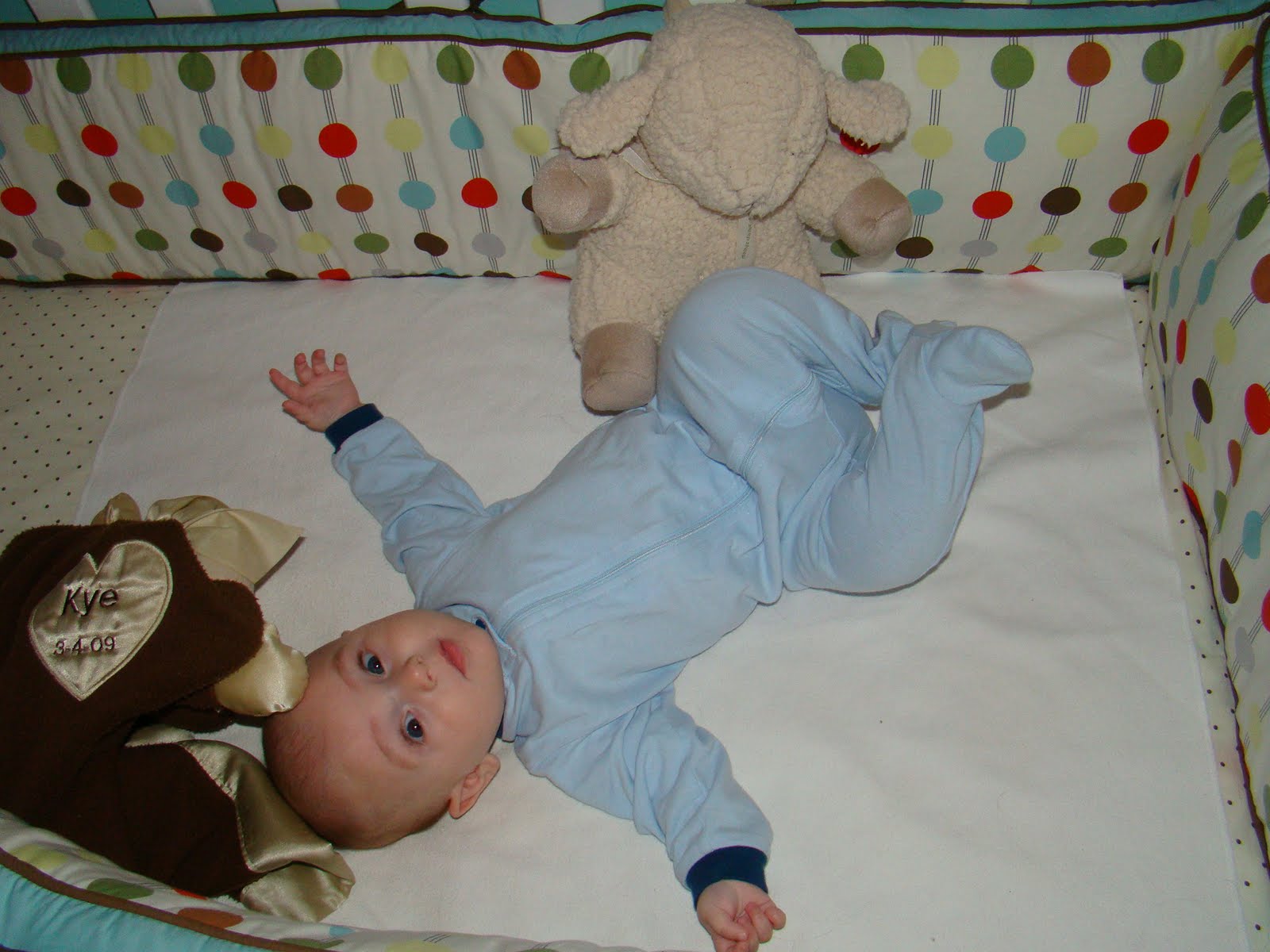 During his first swaddle-free nap I washed the swaddle and the positioner. I plan to keep all of Kye’s swaddles for baby #2 someday but that fleece one is going in Kye’s keepsake box b/c that thing is so gross haha! Kye did wonderful his first night without the swaddle and it’s been smooth sailing every since! 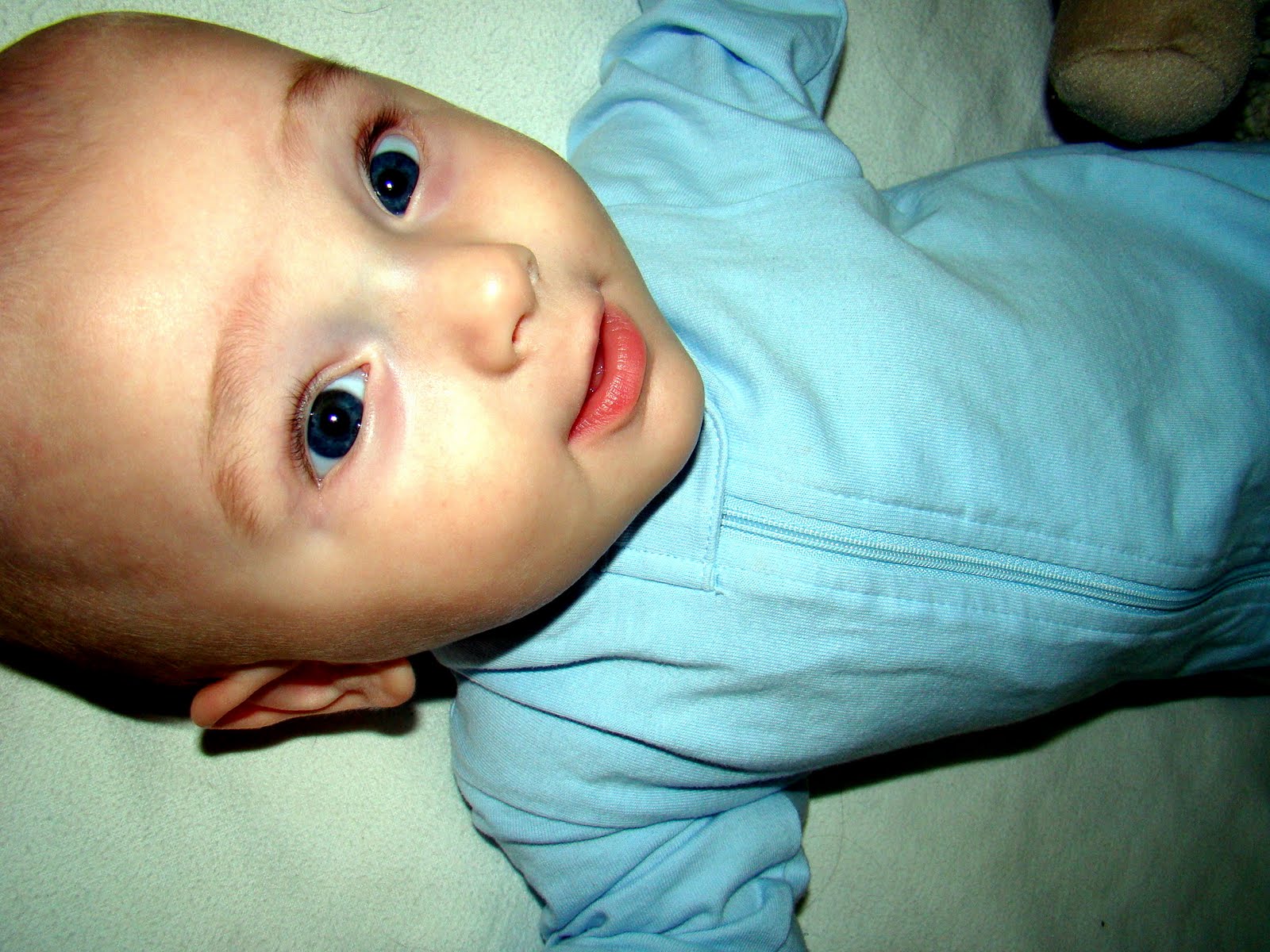 I honestly think he sleeps better now that he doesn’t have it and I wish I would have taken it away a few weeks sooner as I’m sure he was ready. I was worried that it would make it difficult with the paci situation but so far it hasn’t been too bad! He actually wakes up LESS during his naps than he used to and sleeps much better at night too! He will wake up occasionally needing the paci or needing to be put back on his back but overall I think the process of breaking out of the swaddle kept him awake more and now he’s able to be more peaceful.

I love, love, love the way he looks in the little sleepers…SO CUDDLY!!! I think he likes them too and a couple of times when I’ve gotten him up I’ve noticed that the feet are wet from him chewing on them, too cute!

Along with being more cuddly he just looks so much cuter now when he’s sleeping. No positioner all around him and no swaddle up to his nose! He slept for over 2 hours for his nap yesterday and I felt so bad waking him up that I fed him almost 30 min late! I had to get a video of the sweet sleeping boy! 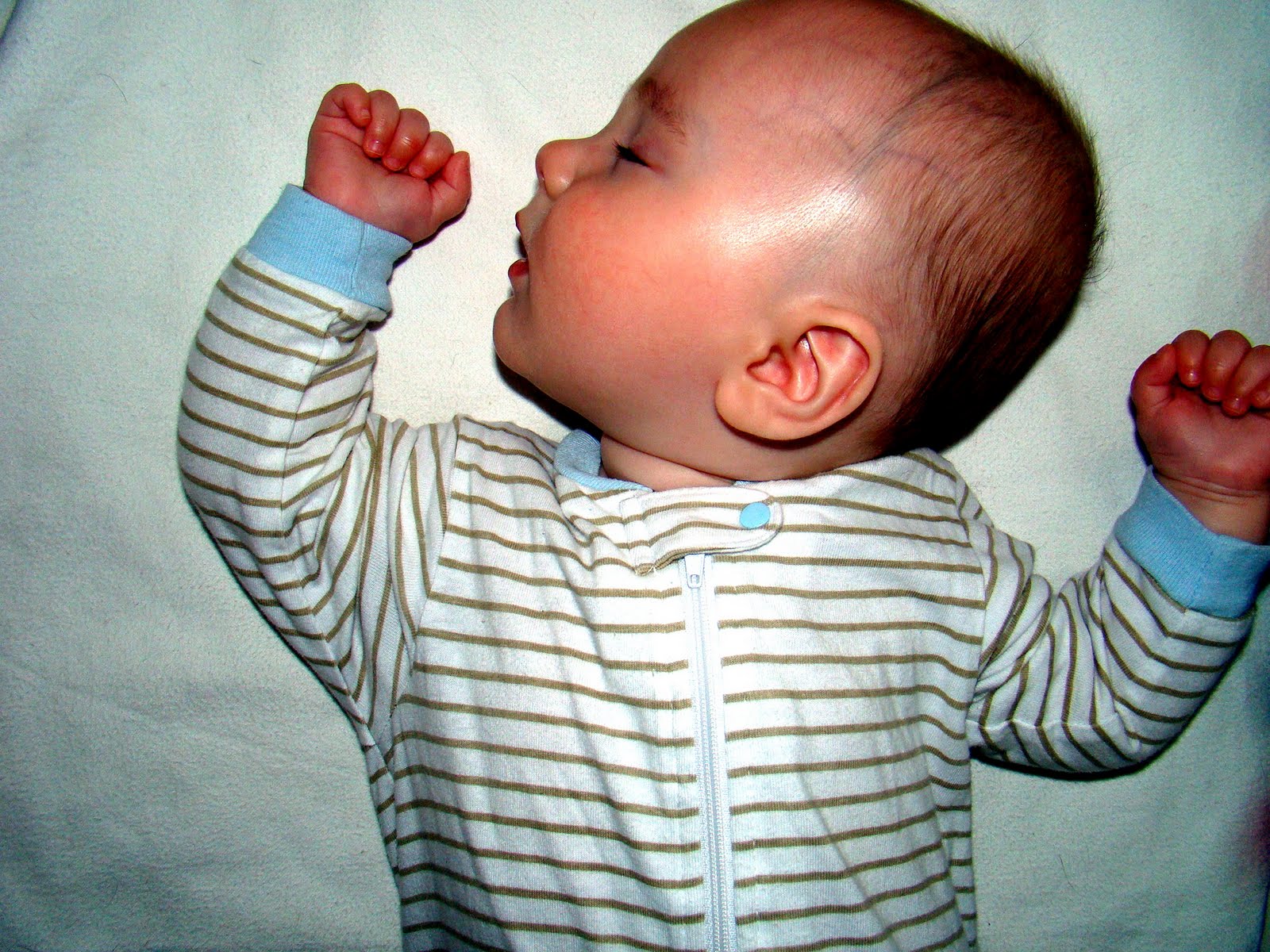