Hollywood Studios has a section set up for Lightning McQueen and Mater! Kye was very excited and the wait was very short since the parade had just ended. At first he was shy to meet them (they are HUGE which is probably a little shocking when he’s only used to a matchbox sized toy car!) but once he got over to Lightning he didn’t want to leave. He actually got pretty upset because he couldn’t climb into the car and drive it!!! 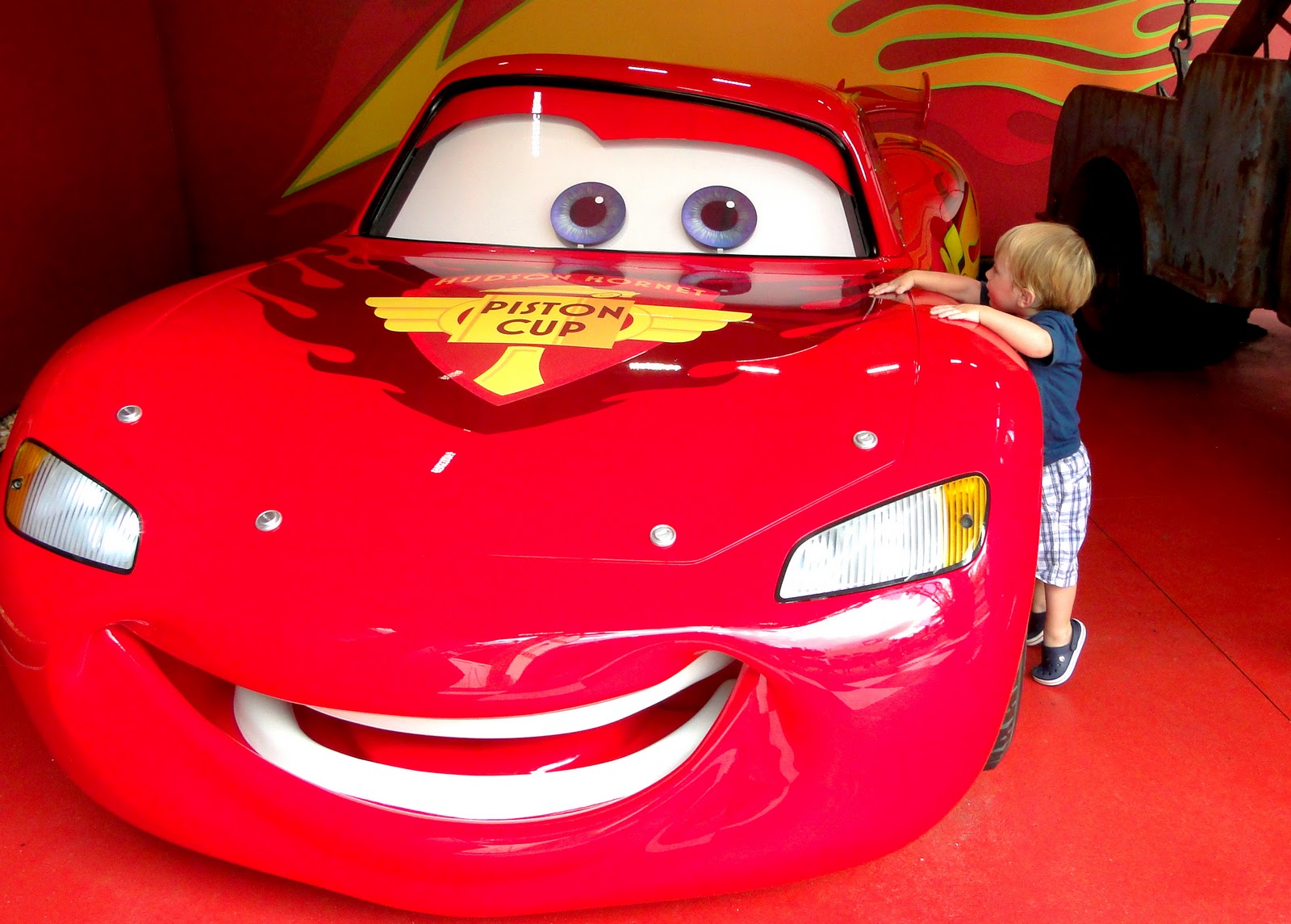 We could NOT get him to look away for a single picture! 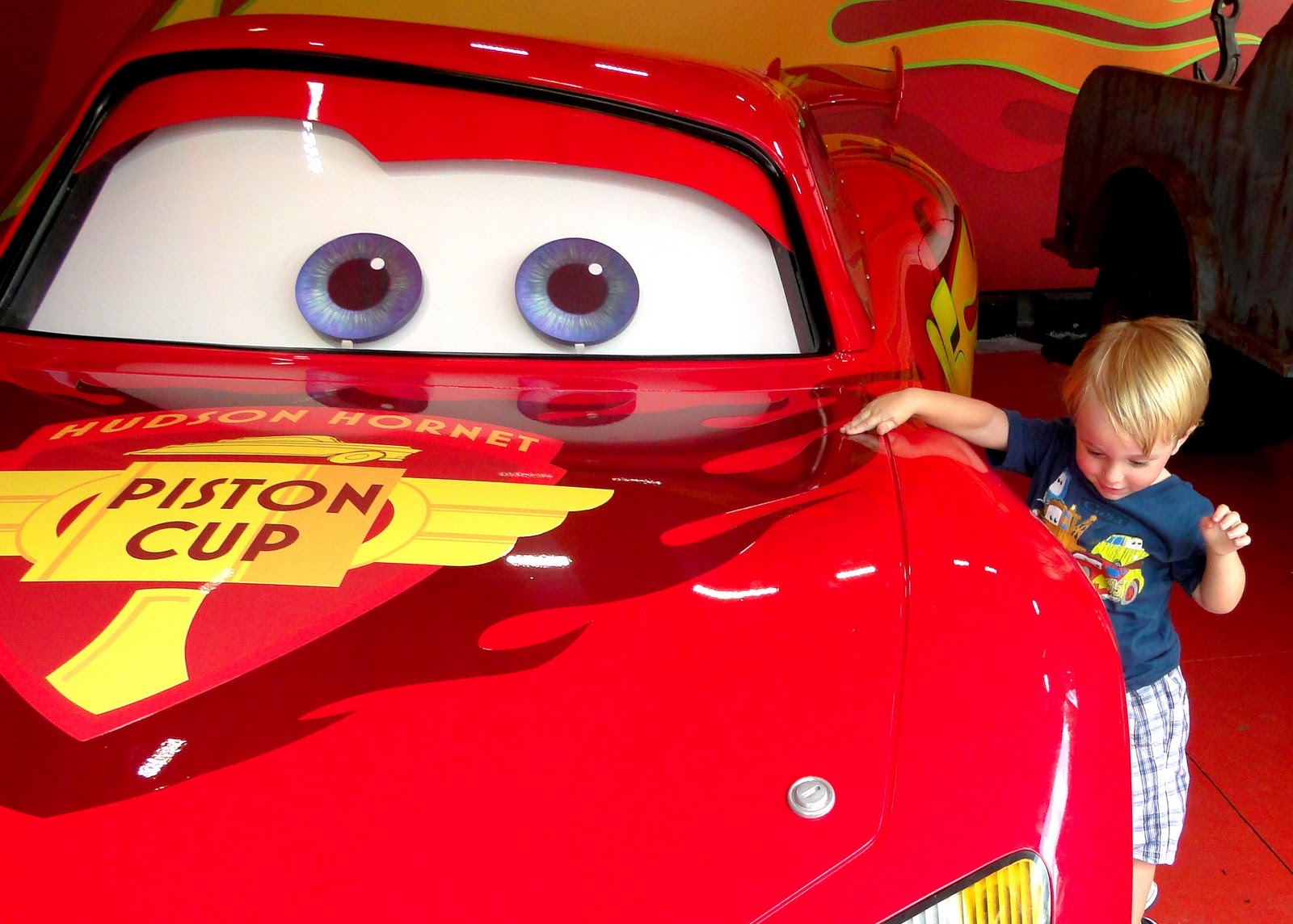 Zach literally had to pry him off of Lightning to let someone else have a turn! 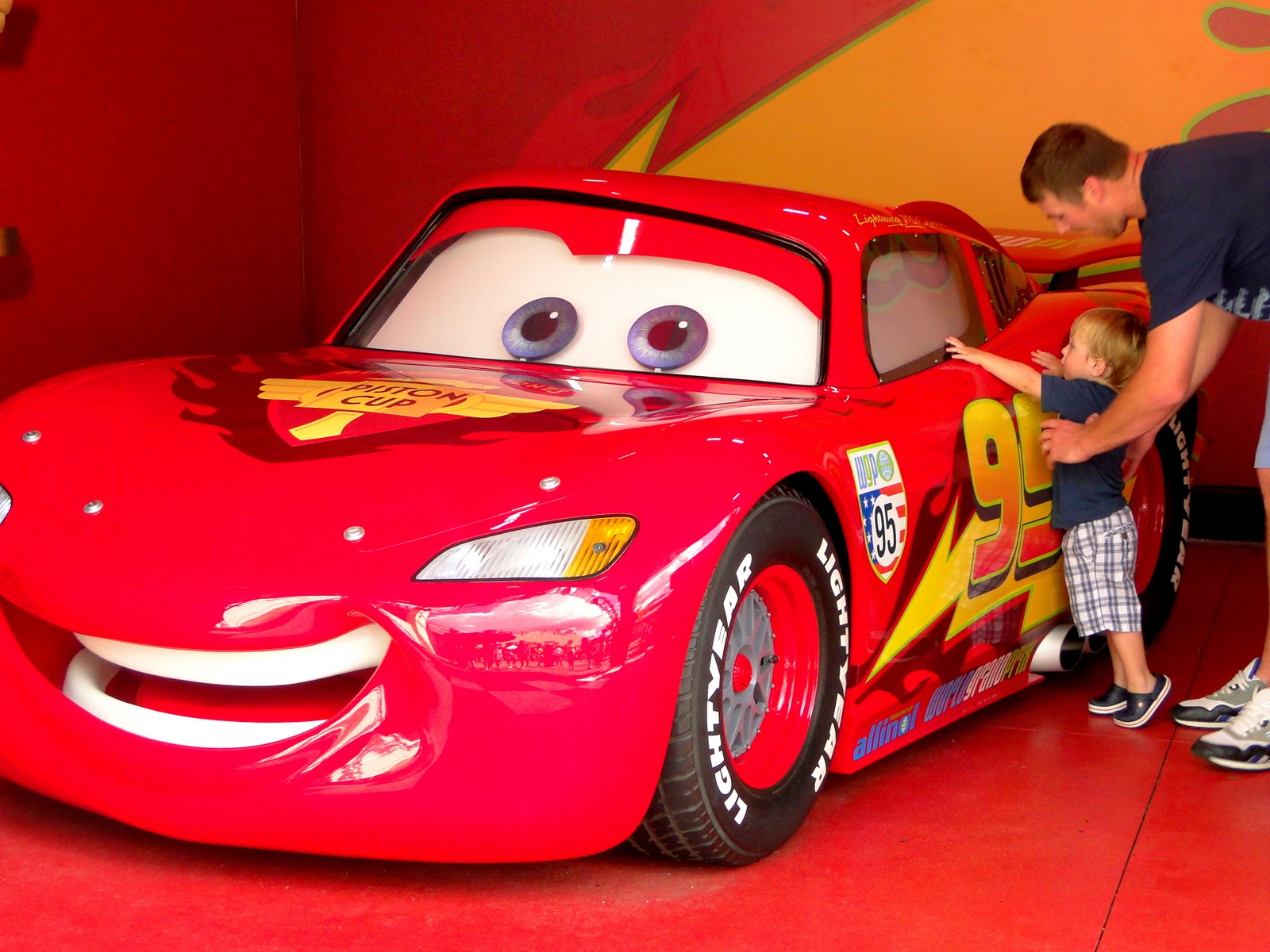 He didn’t even go see Mater because he took up so much time with Lightning! 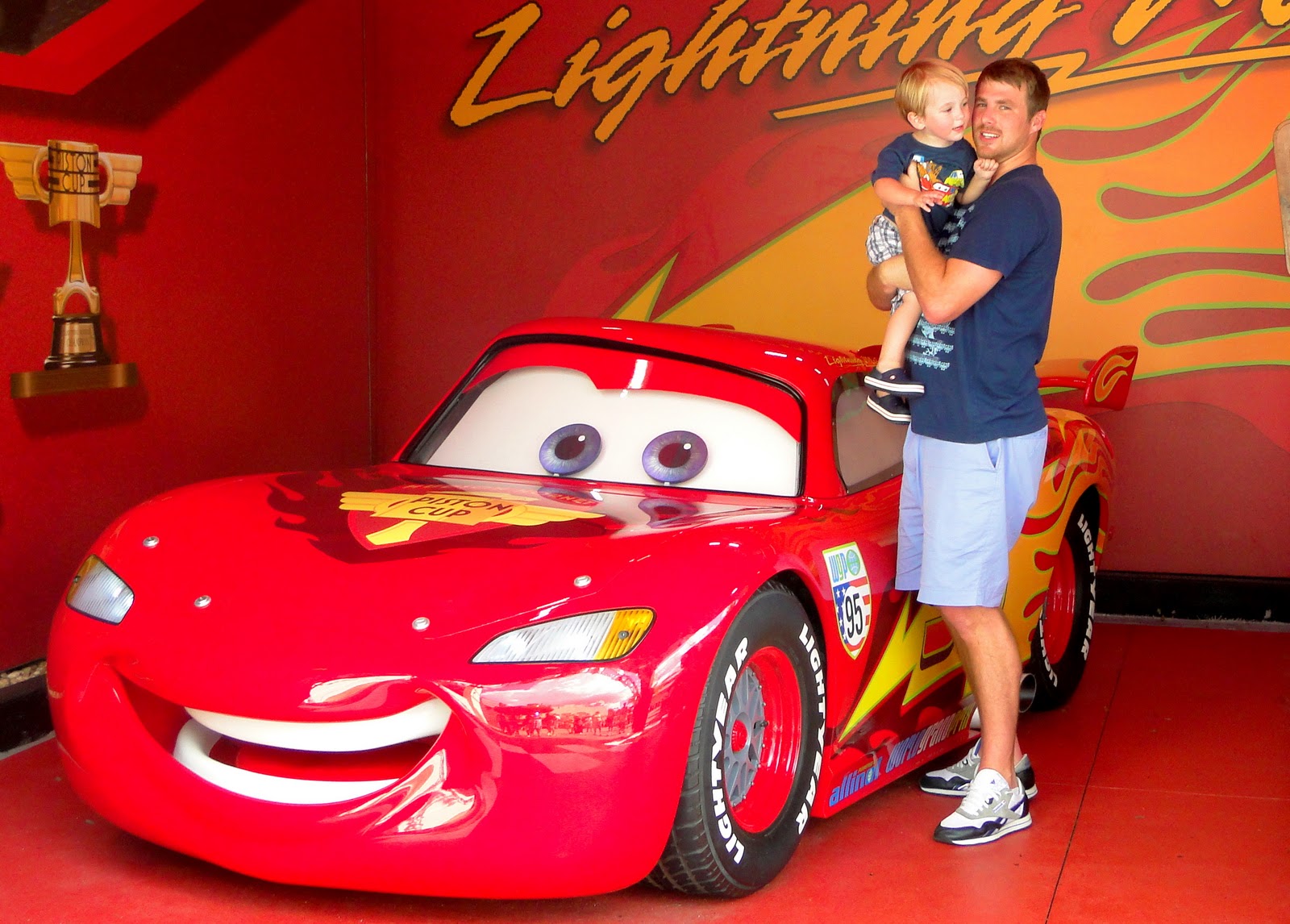 He talked a lot about how Lightning McQueen didn’t have doors and how he wanted to drive him. Us adults said we wished they’d had it set up more so the kids could pretend to drive them…but that doesn’t make sense! In the movie they don’t  have doors either and how would he ride in Lightning? Kinda morbid! I guess they did the best they could with the set up…but the cars didn’t even talk to you or anything. They just sat there making revving sounds. While we were in line we got to talking about how it will be with two kids at the parks and how convenient it’d be if Blitzen is a boy. Hard to imagine waiting in the boyish character lines and the princess ones!

Kye cried leaving Lightning McQueen…have you noticed a little pattern developing? I think at Lion King he realized that once we left a show/ride/character we didn’t get to see them again and I think it was harder for him to leave them knowing this. You don’t want to see your kid upset, but at the same time you know he REALLY loved it if he’s crying over leaving it! So it was a good way to judge what his favorite things were 😉

None of his tears ever lasted for more than a few minutes and were just sweet, sad tears – no crazy wild fits or anything. After we left Lightning we decided the kid was in need of a RIDE. So we popped into Muppets 3d. Um, not a ride. And not funny. And not even remotely cool…even 3D glasses couldn’t make it cool! Total waste of our time, but at least it was air conditioned and got Kye’s mind off Lightning!

Like the other parks, there were many things we decided to skip out on at Disney Hollywood Studios. Kye was too young for Tower of Terror, Star Tours, and Rockin’ Rollercoaster. Sounds Dangerous starring Drew Carey was closed as was the Studio Backlot tour (Tip you can expect rides to be closed during non-peak seasons for repairs and such!). We skipped Honey, I Shrunk the Kids, Lights, Motors and Action Show, Indiana Jones and American Idol because I’d read in the guidebook that they were all rather boring for Kye’s age group. Plus who wants to see random people pretending to audition for American Idol, a show we don’t even watch?!? No thanks!

I would have enjoyed Walt Disney: One Man’s Dream and if Zach and I ever go just the two of us we’ll for sure watch that. Same with The Great Movie Ride. I read that both are long and rather boring but it’d be something I’d enjoy doing probably! I’d also like to take Kye to eat at the Sci-Fi Dine-in Theater Restaurant. They were booked solid when I called to make reservations so it’s something we’ll do next time!

We headed back over to Pixar Place and had some time to kill before Disney Junior – Live on Stage! started so we hoped in line to meet Buzz and Woody! They have a GREAT set up where you can see Buzz and Woody from the street out front and the inside is like a scene out of Andy’s room (goes well with the Toy Story Mania ride). Since we were right next to Toy Story Mania, Mom and I waited in line and let Zach, Mrs Charlotte and Kye go ride Toy Story Mania again. While they enjoyed it, I actually wish Kye could have seen all the neat things in the line! There were lots of spots to play and take pictures, it was fun seeing all the little kids!

Mom and I were up next to meet the characters when Zach, Kye and Mrs Charlotte showed back up! Right on time! They came in a back door and were ready to meet them! Kye ran straight to Woody 😉 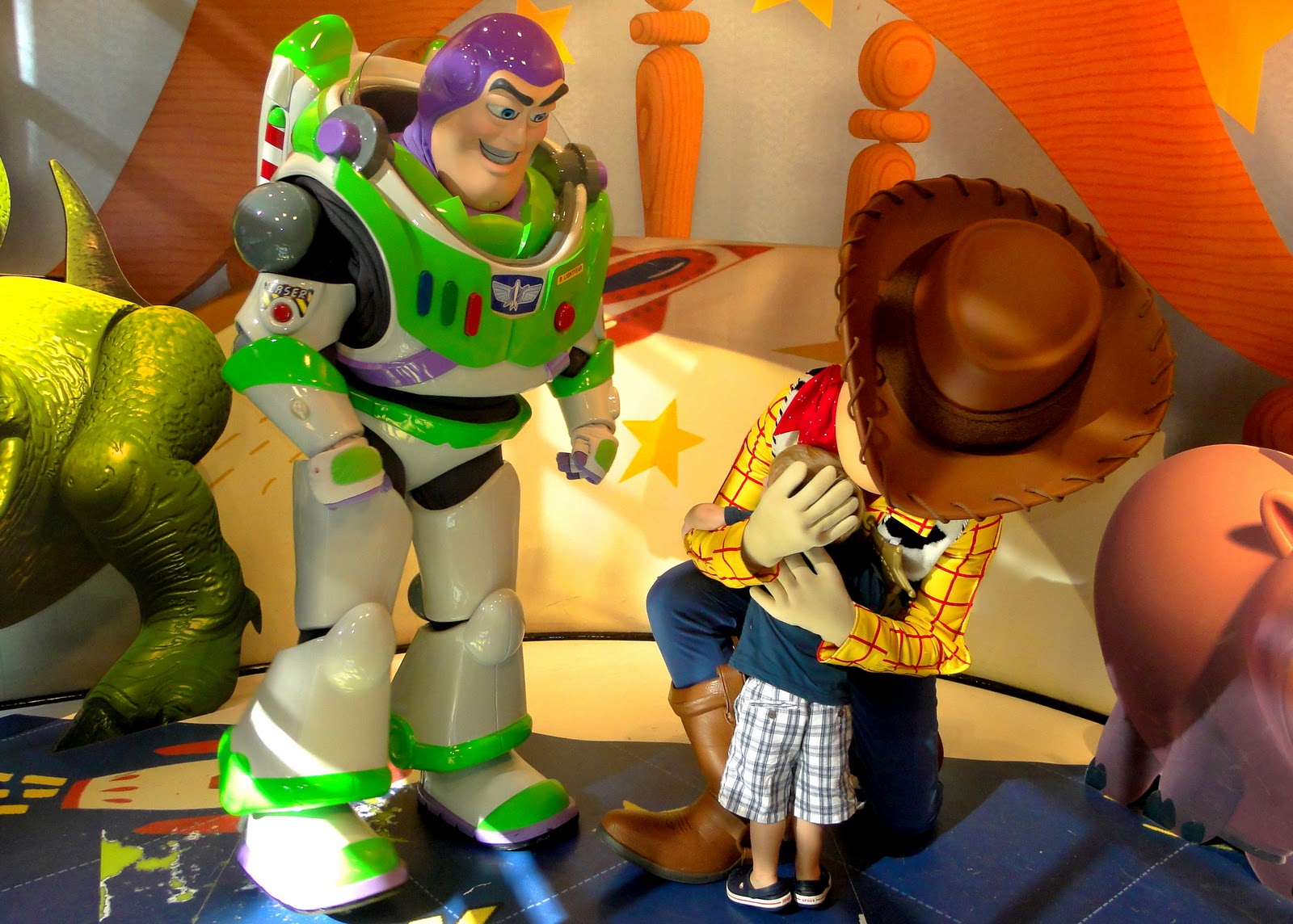 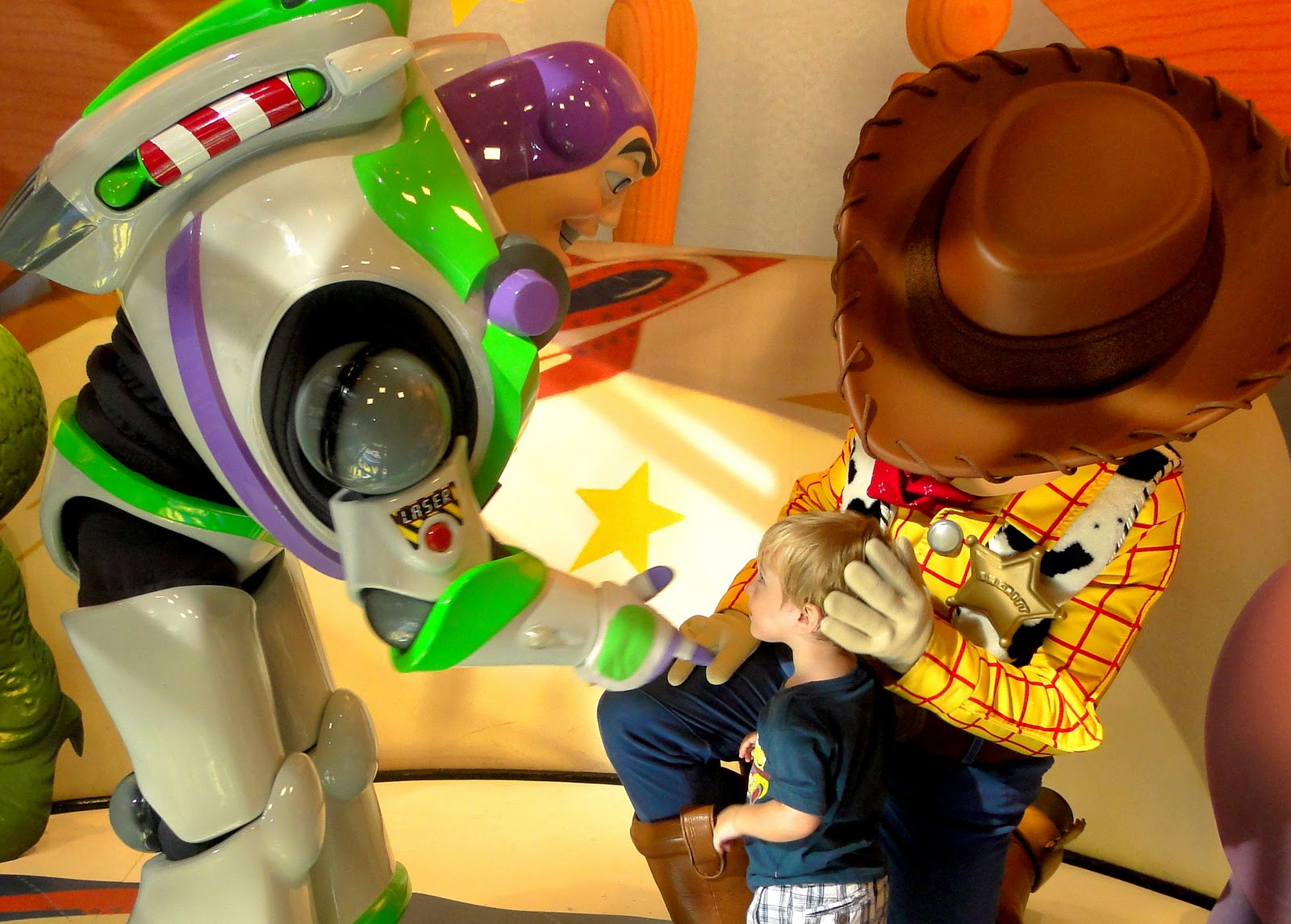 Same proud smile as when he met Woody and Jesse huh? 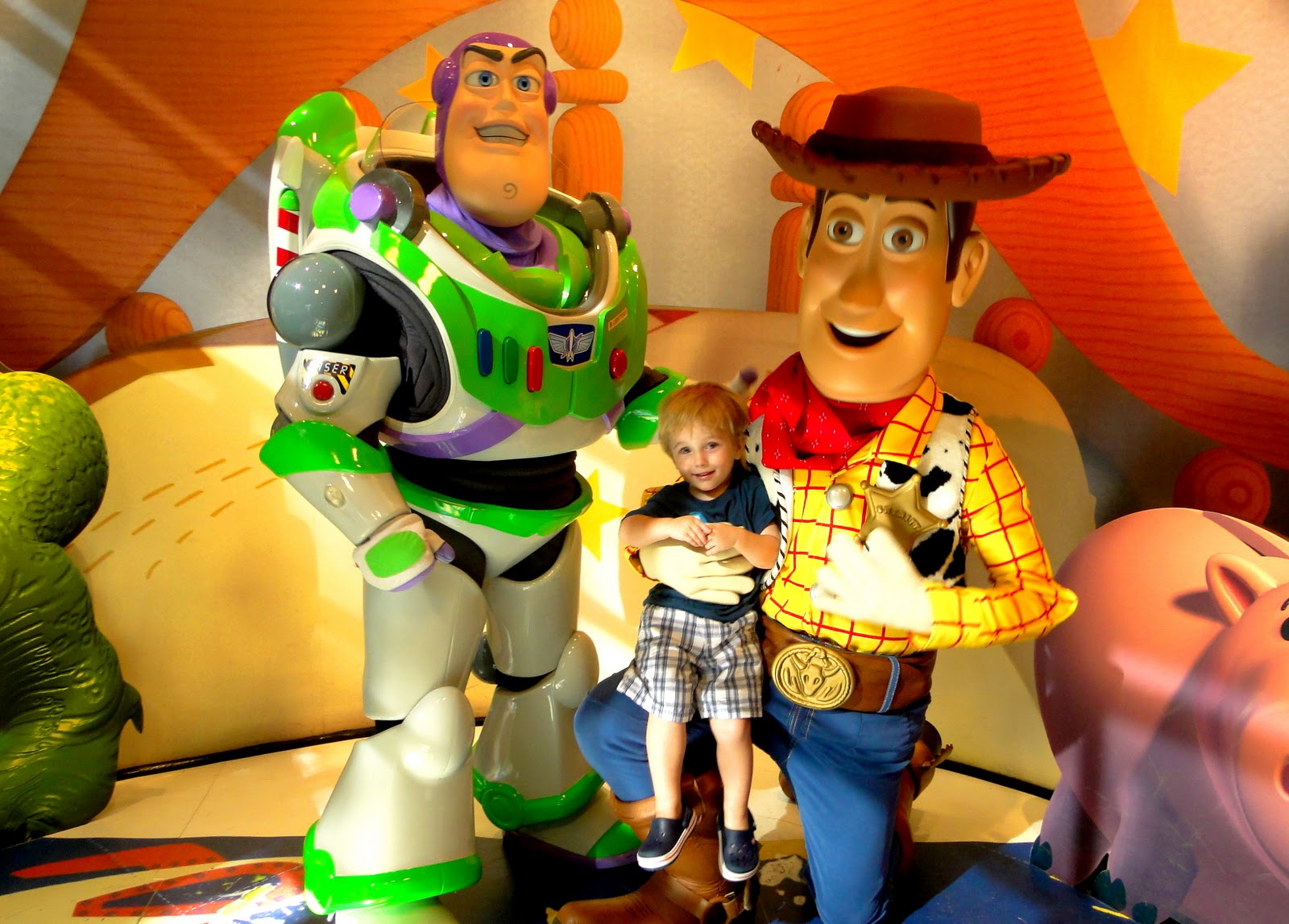 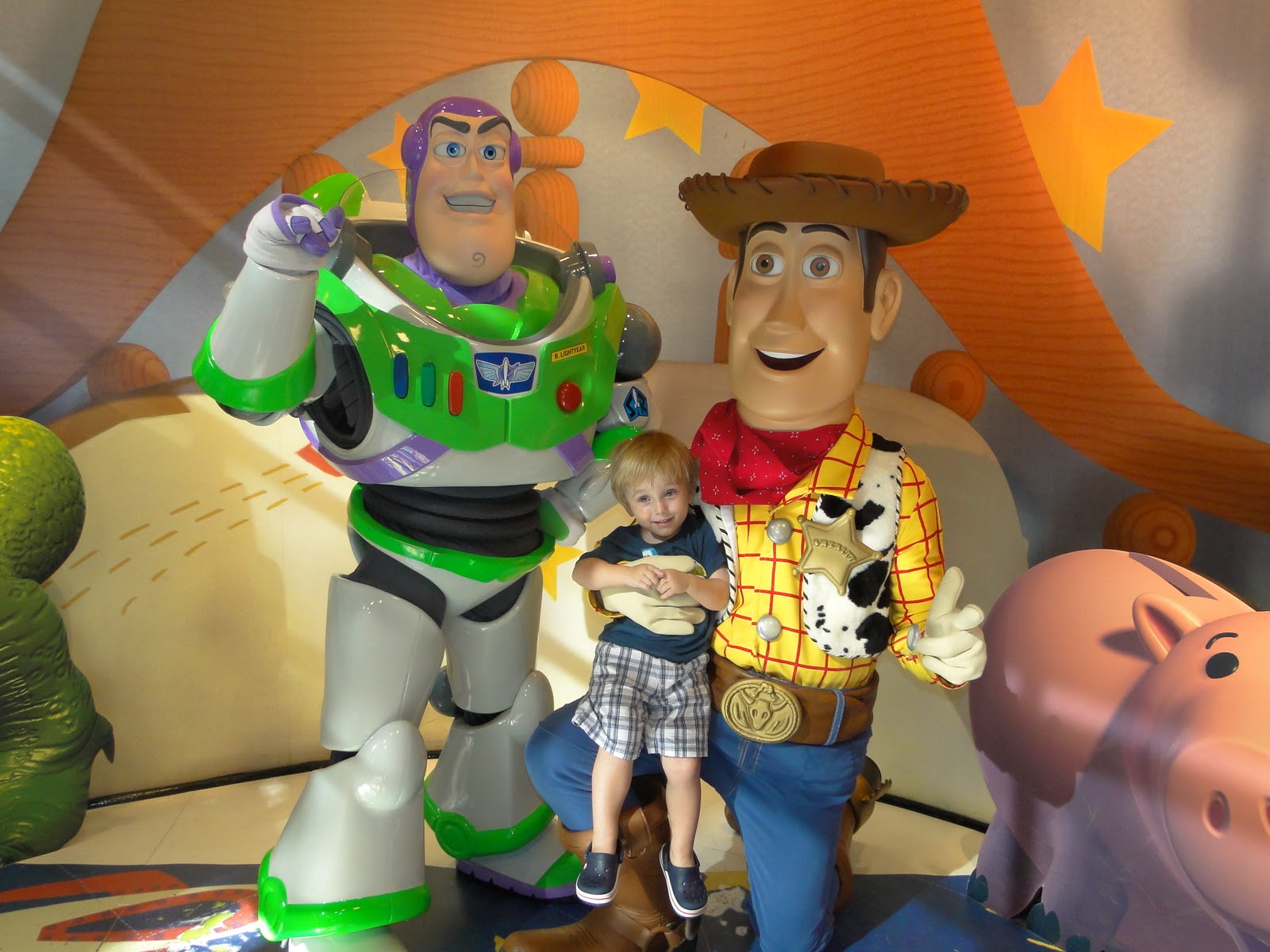 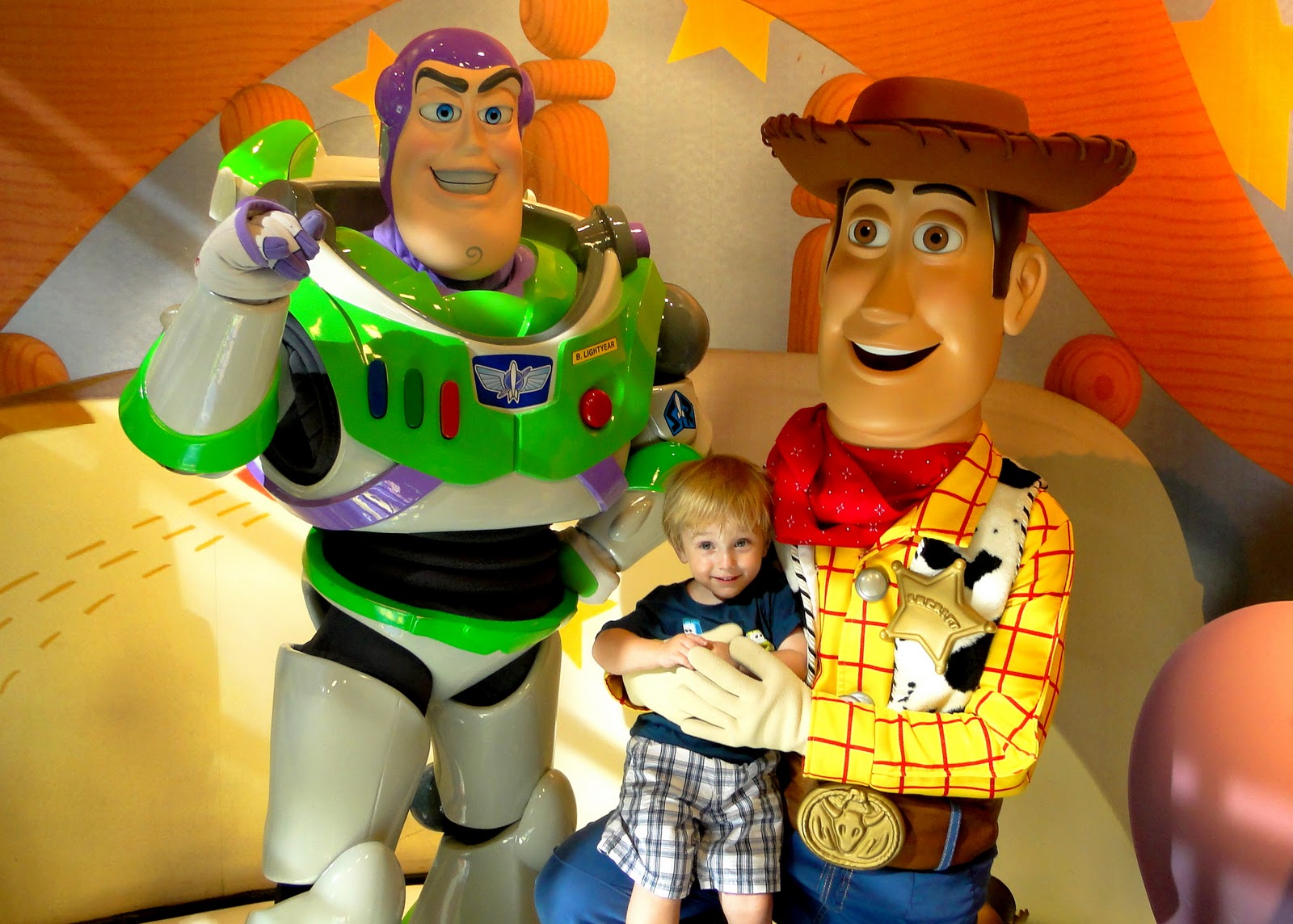 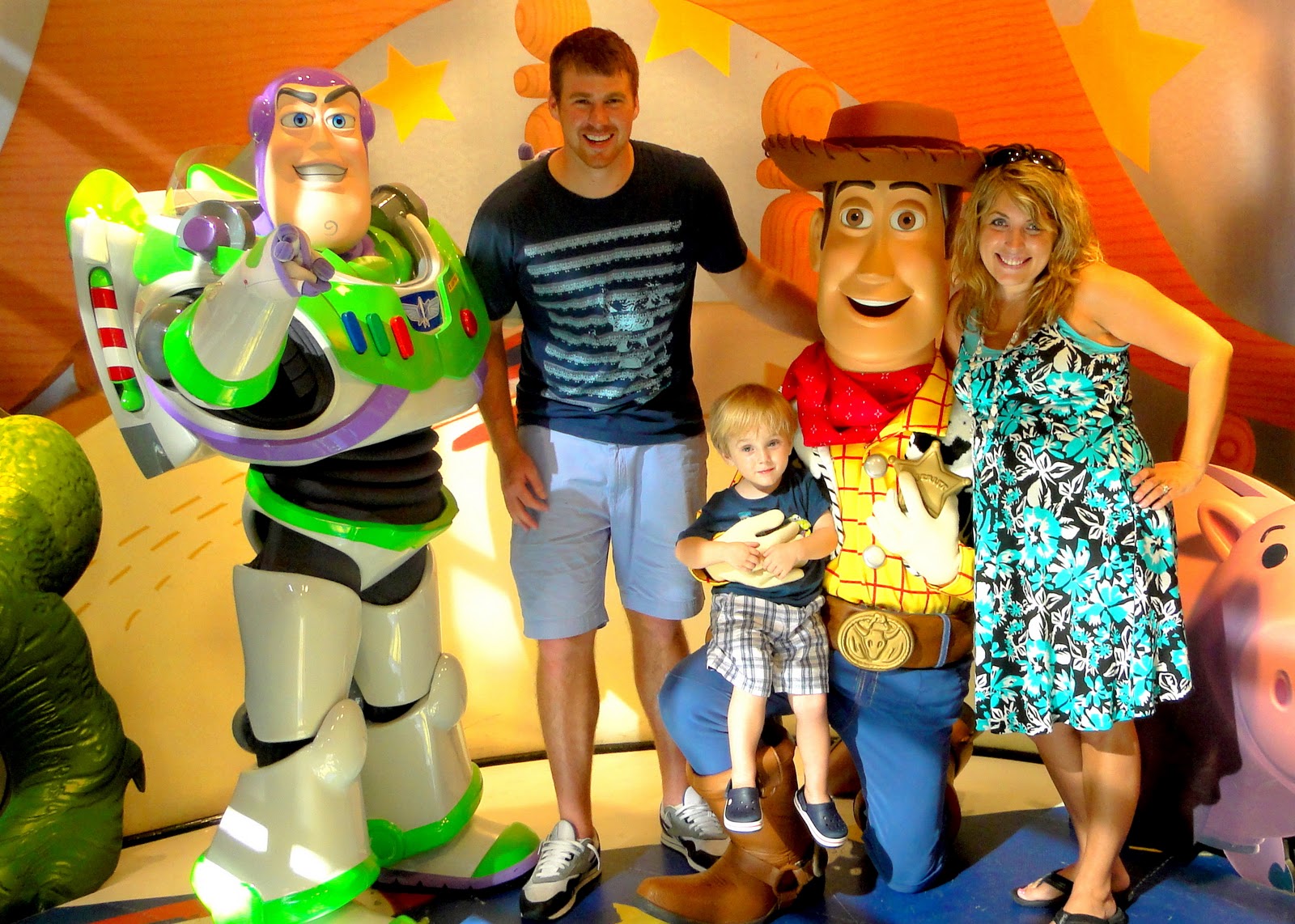 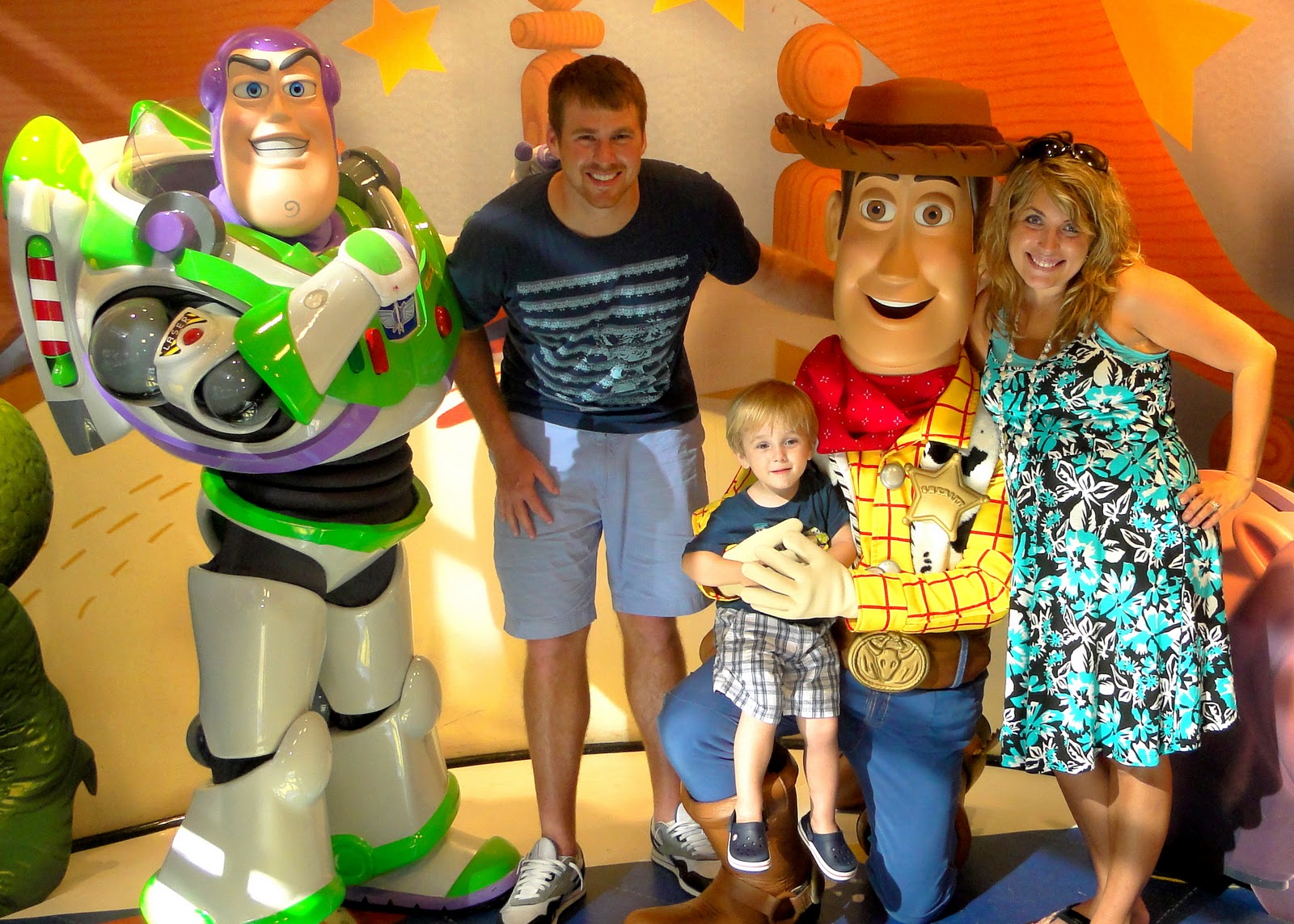 Kye REALLY enjoyed meeting them..but Buzz was a jerk!!! He was not very friendly at all and it must be that the outfit is uncomfortable?!? He did NOT want us to touch him. Very strange. Woody was the exact opposite and was so hands on and friendly. When we left even Kye said “Buzz was mean.” Didn’t he even LOOK kinda mean?!?! The Woody and Jesse experience was much better but I’m still thankful he got to meet Buzz and see Woody again too!!!

After the meet and greet we headed over to wait for the next showing of Disney Junior – Live on Stage! This is a must do if you have preschool age kids! Kye’s never seen any of the shows they featured but one of them has the main 5 characters in it (Mickey, Minnie, Pluto, Goofy and Donald) so it was well worth it to see them! Plus another show has some pirate characters and Kye loves him some pirates now 😉

Waiting in line with G-Mama and I love these faces!!! 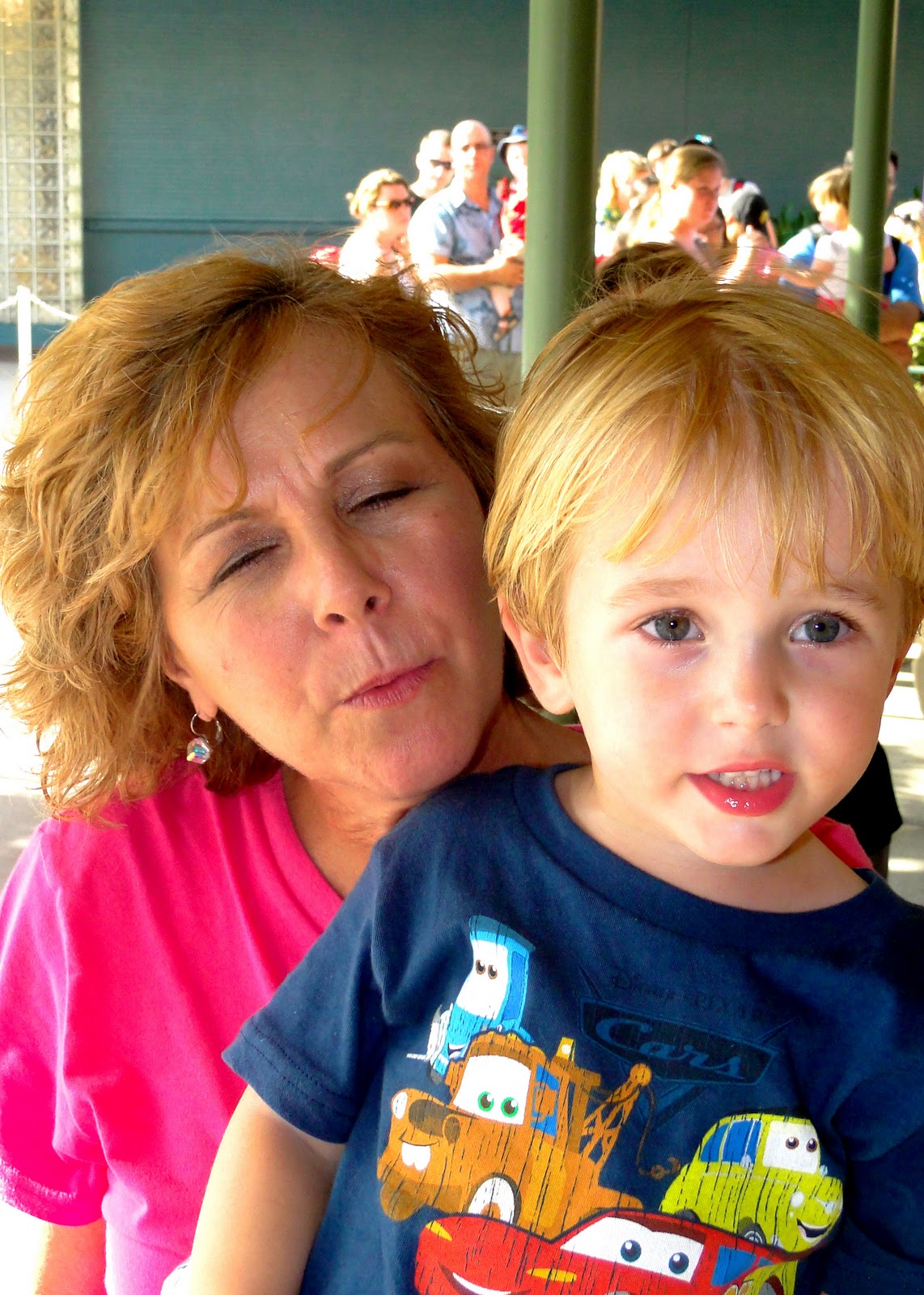 Either a roar or a yawn, I can’t tell which! much better of them both 😉 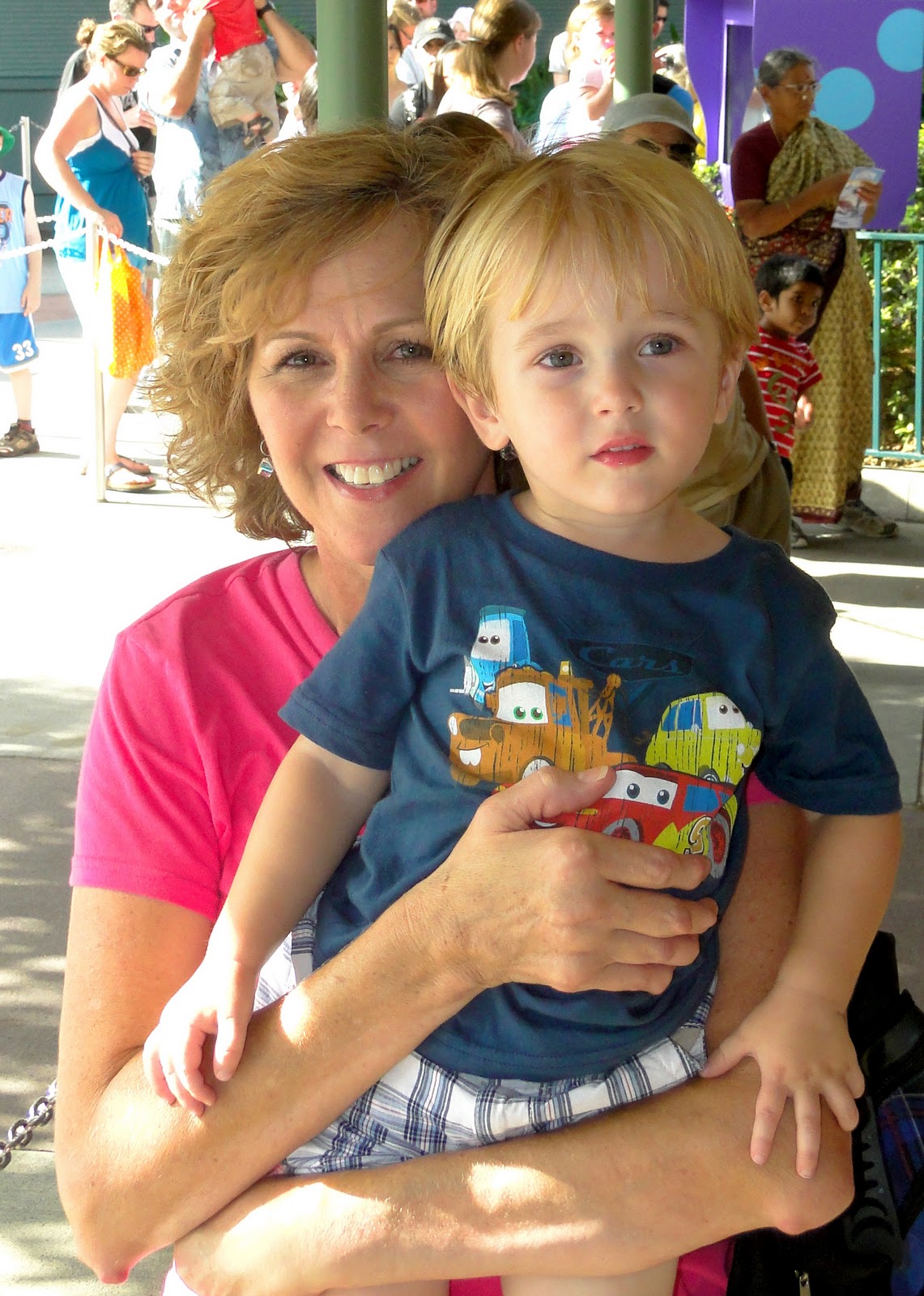 You sit on the floor for this show which was fun and something different. We happened to sit with a family who was there for a Make a Wish trip. Their son is 3 1/2 years old and is a dwarf with multiple health issues. He was PRECIOUS and his favorite show is Mickey’s Clubhouse so he was THRILLED to be there. He captured all of our hearts with his dancing and being silly while we waited for the show to start. It was one of those situations where you can’t help but to think about how truly blessed we are.

The show was pretty boring for us adults (we ended up talking through most of it haha) but Kye really enjoyed seeing all the characters and participated the whole time! 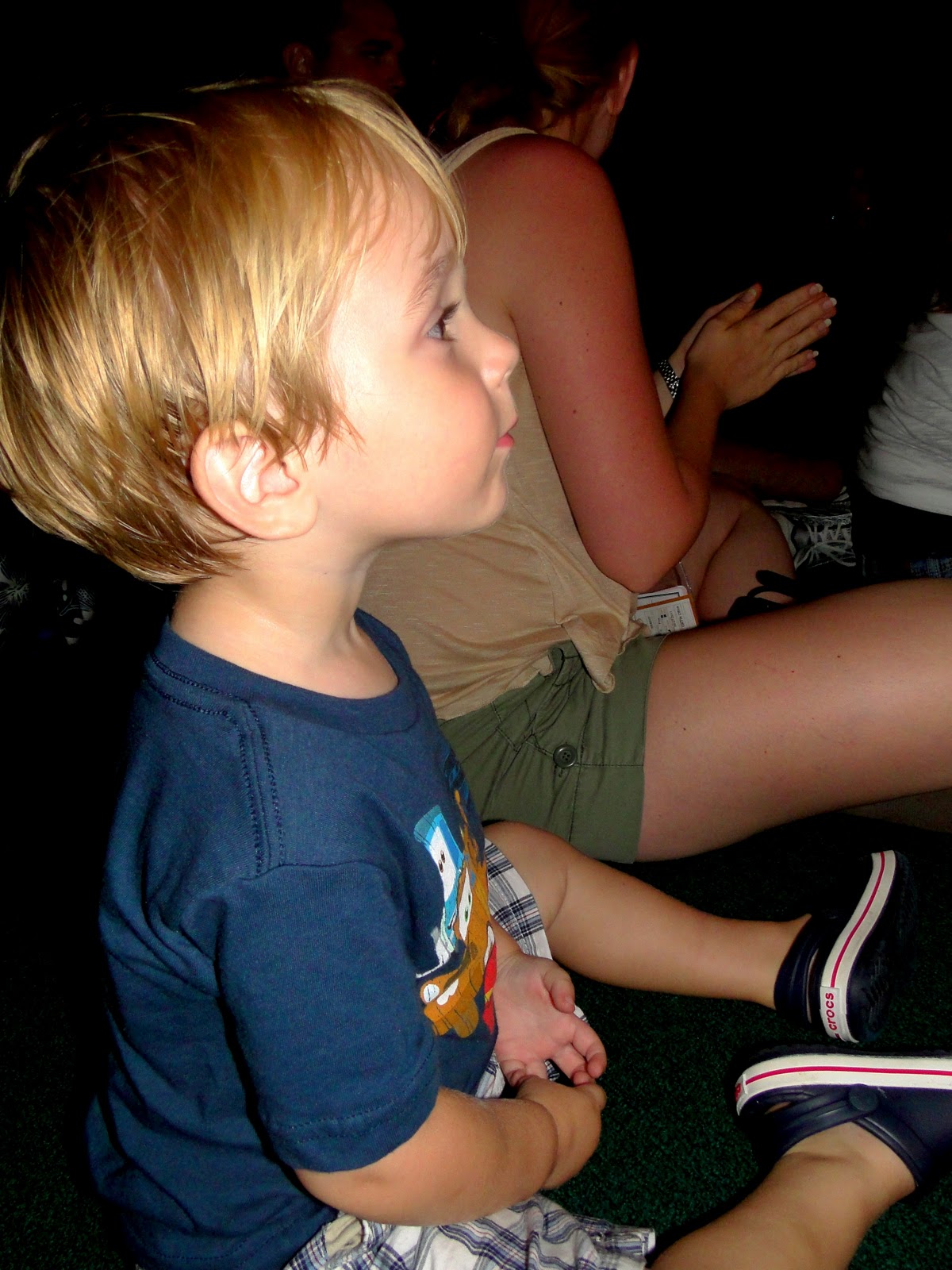 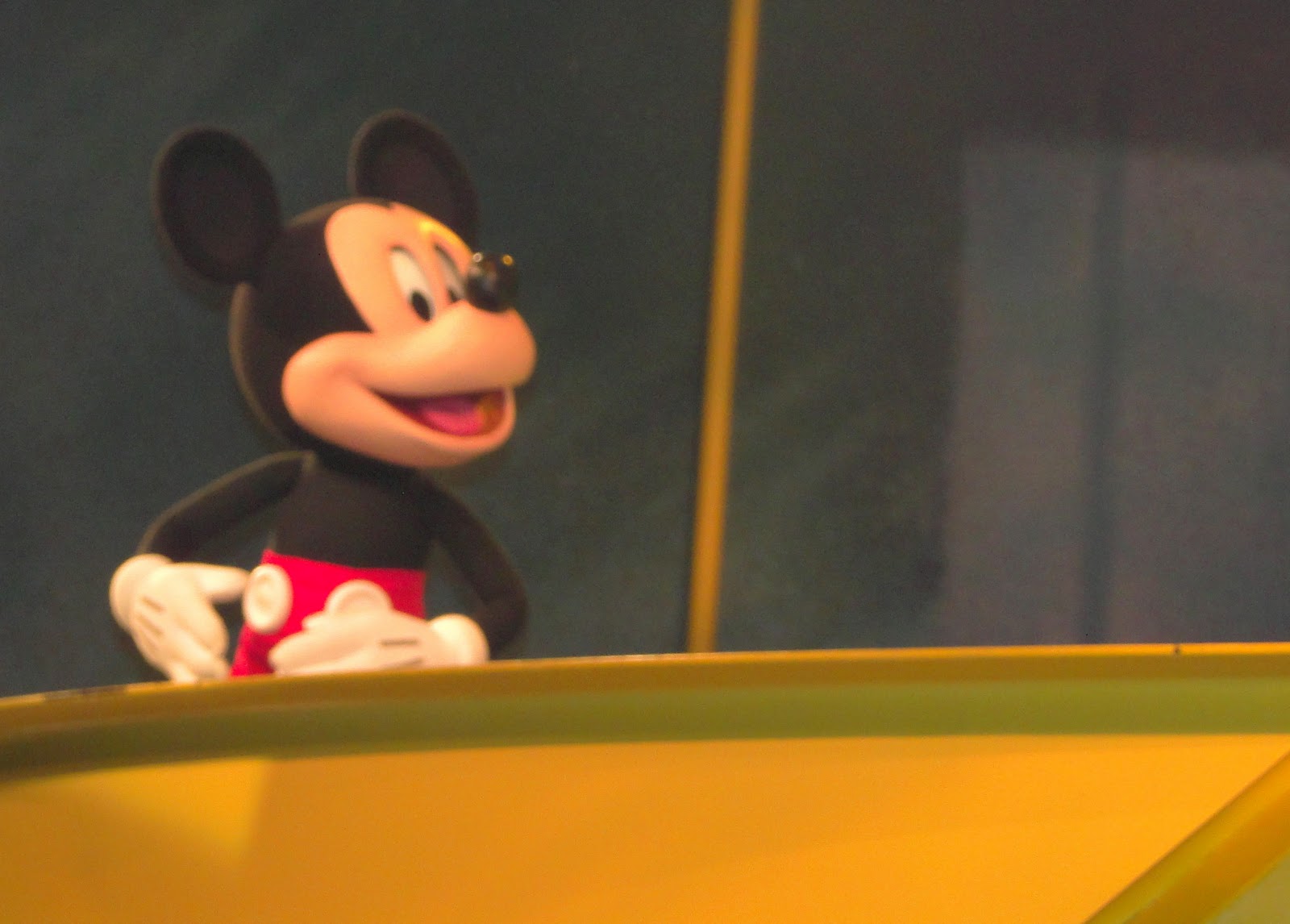 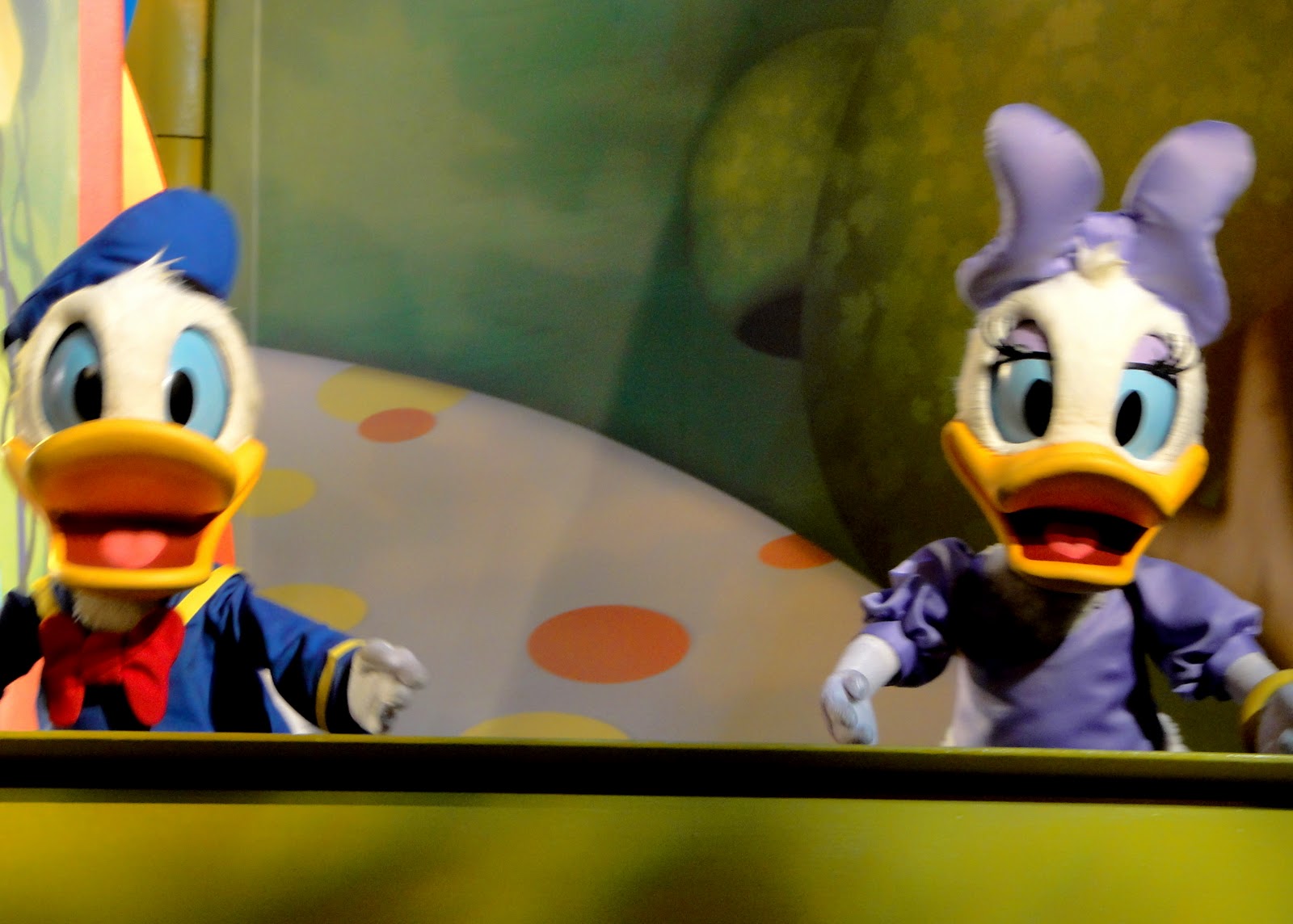 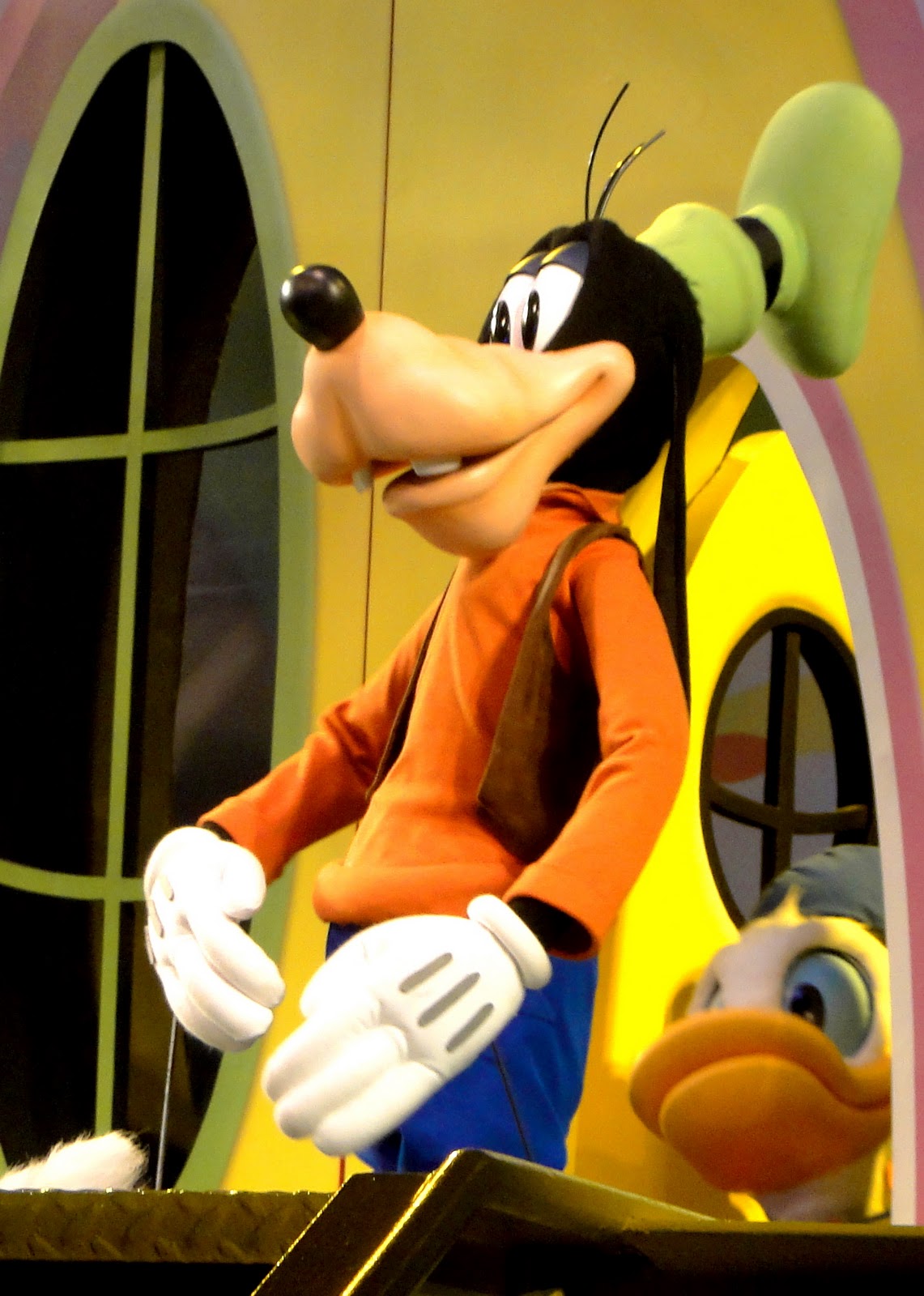 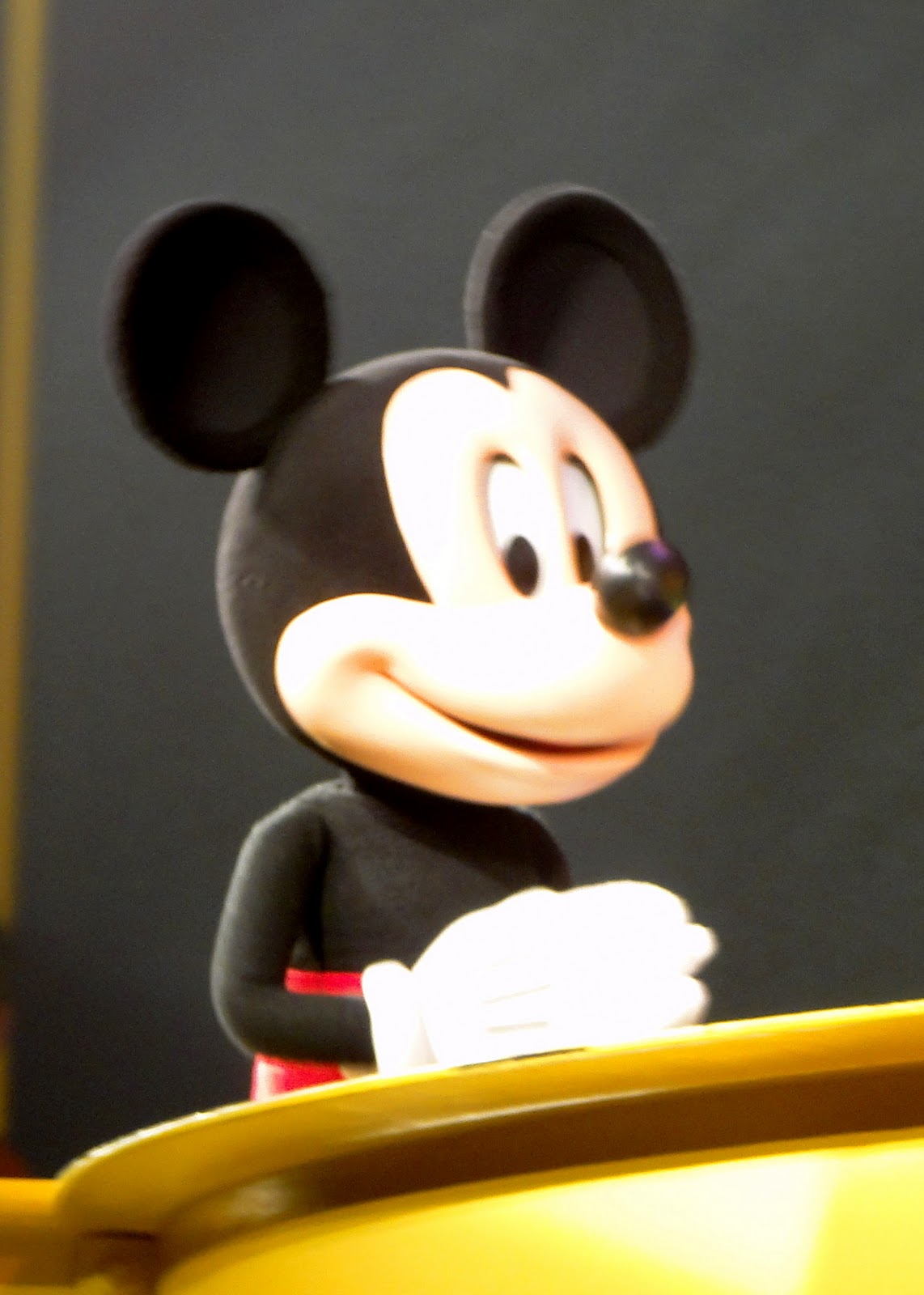 the pirate (I think his name was Jake?!?) 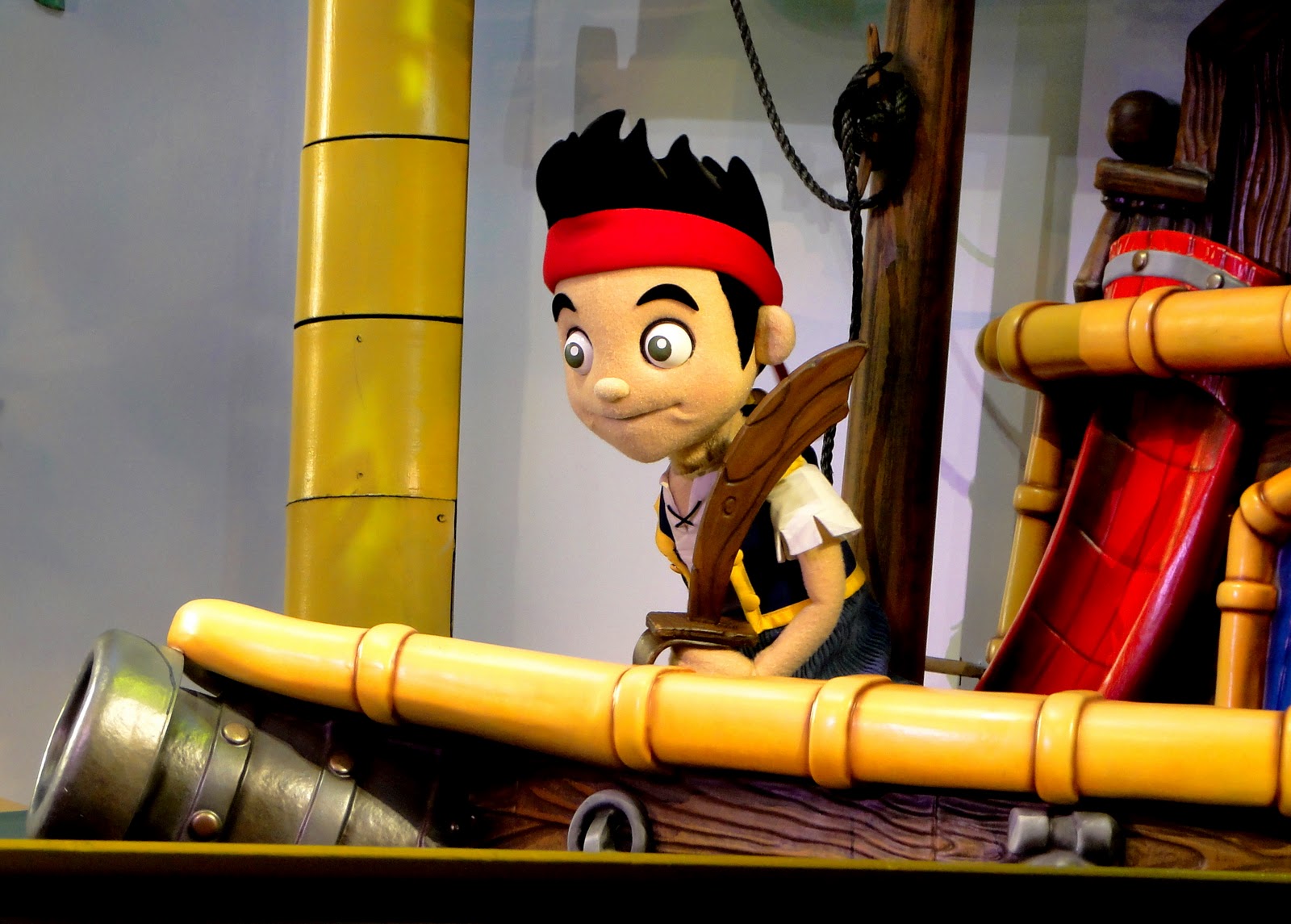 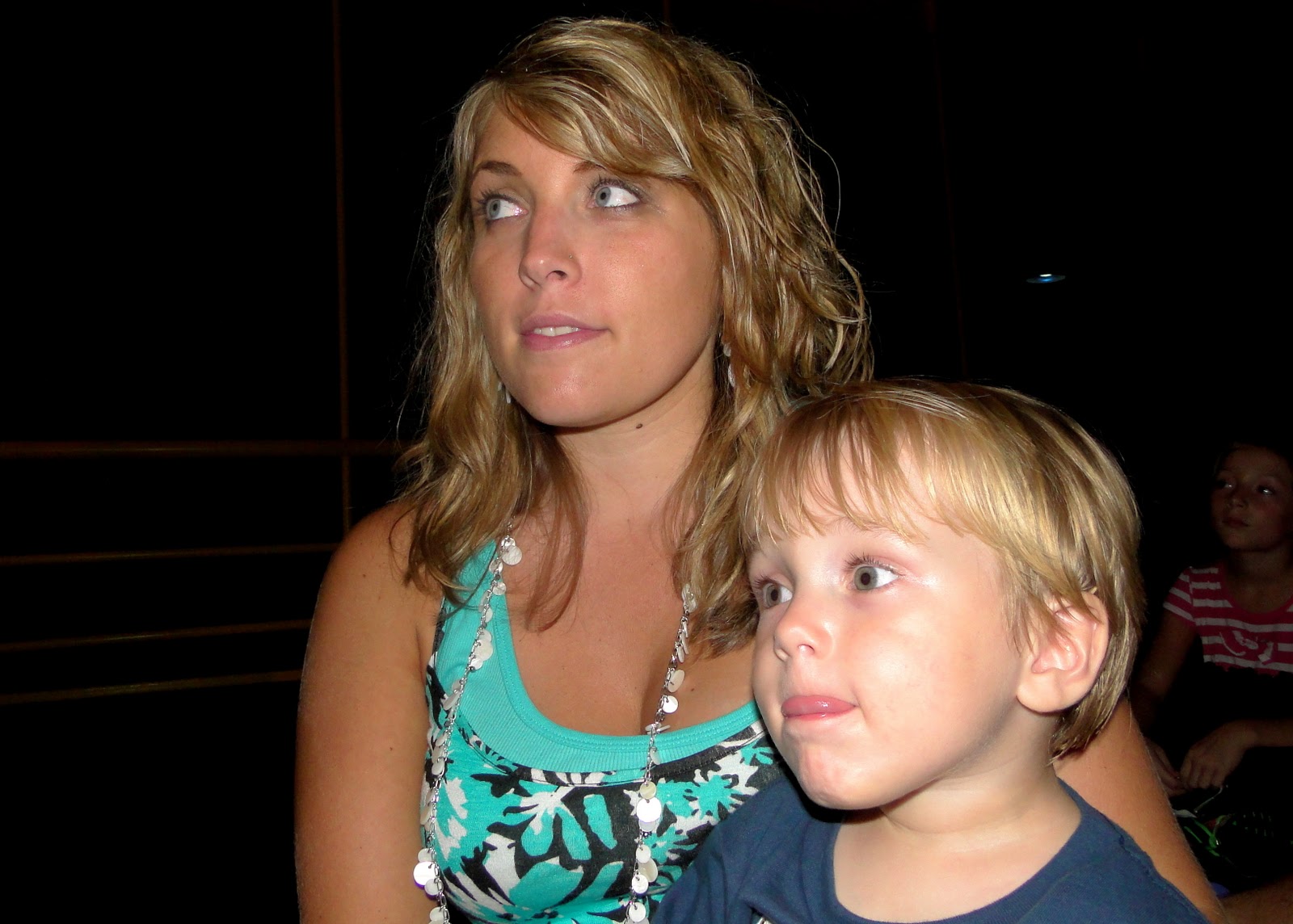 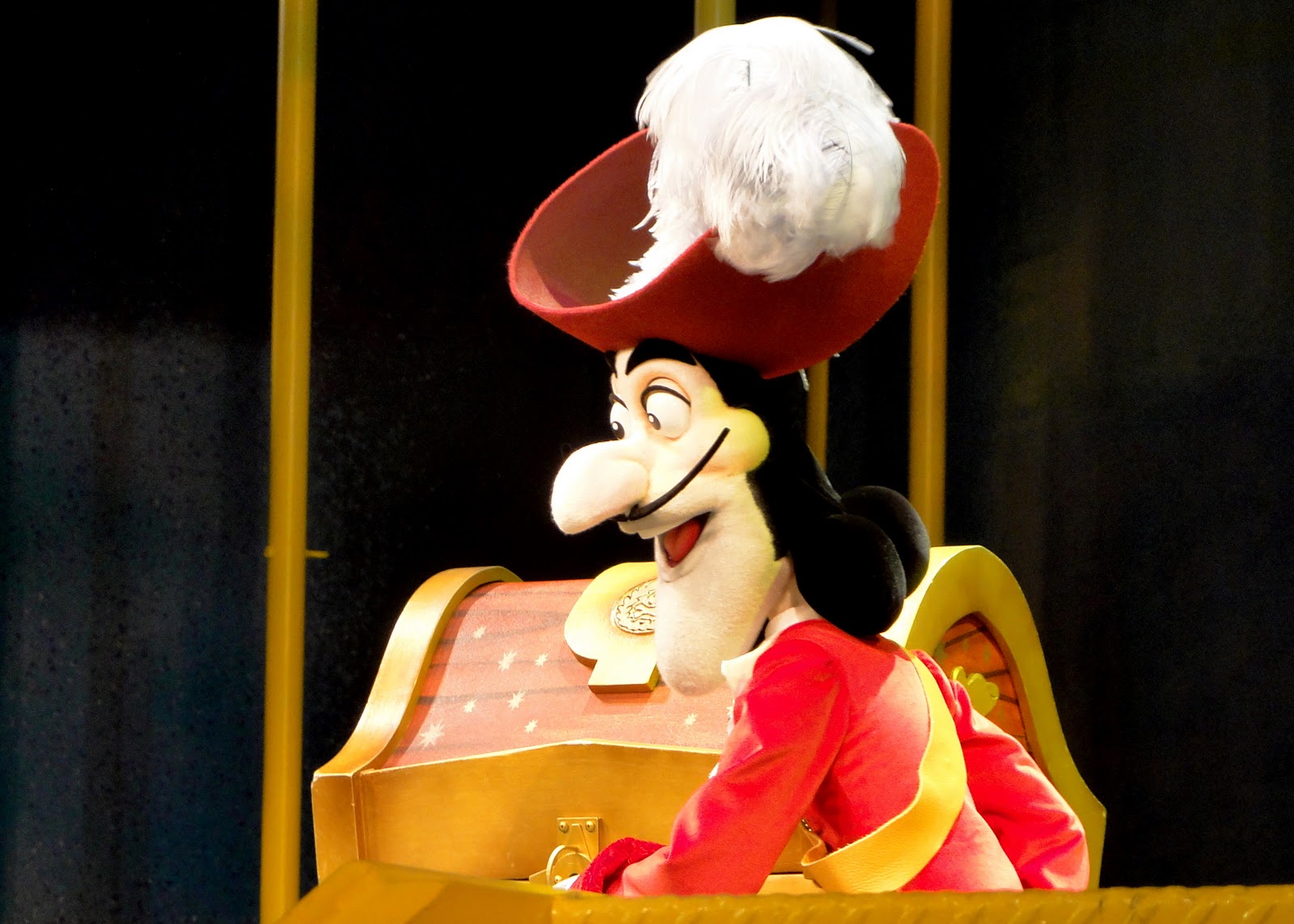 watching with my sweet boy 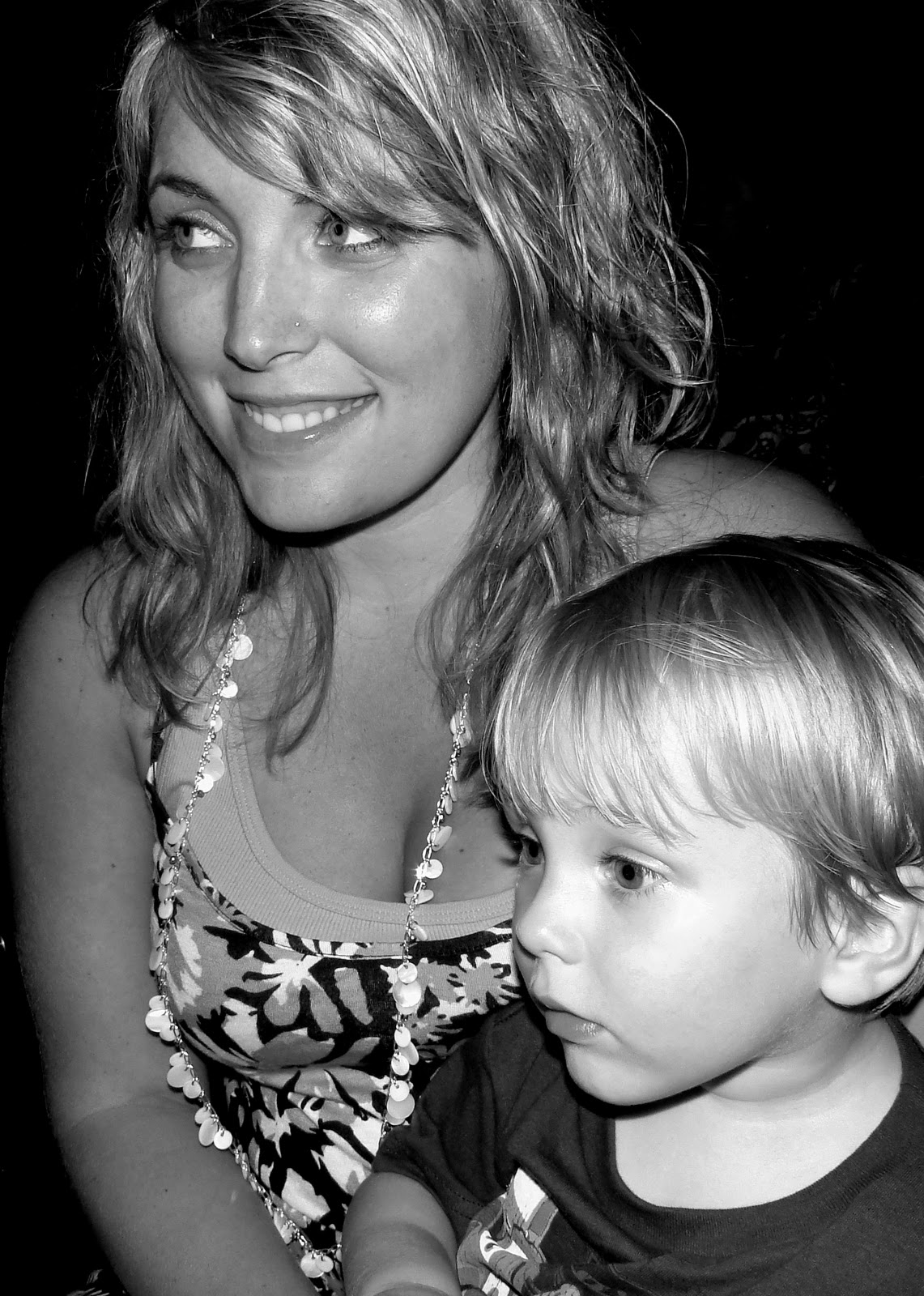 It was neat that they had the kids involved with a lot of the show. Bubbles and “treasure” came down from the sky and the kids had to help solve problems. Kye enjoyed the storyline about Minnie’s birthday party and helping plan the party. He kept saying he wanted some of her cake 😉

We couldn’t believe how much we’d accomplished in one afternoon at the park! I thought we’d only get to do part of it and would have to come back the next day to finish it up but it wasn’t even 5:00 yet and we only had one more thing to see that was on our list of things to do at Hollywood Studios and that was see The Little Mermaid. It ended up being our only glitch as the showtimes changed and it wouldn’t be shown again until 6. We decided to take a break right outside the theater and eat. We took turns using the bathroom and all ate the snacks and dinner stuff we had packed. Kye was pretty tired and hot so he wasn’t thrilled about the wait but food helped him get through, as did the promise of seeing Ariel. Since The Little Mermaid is my personal favorite Disney movie, it’s no surprise that Kye really likes Ariel. But it’s funny because he totally likes her in a guy liking a girl way…he thinks she’s pretty 🙂

We were mildly annoyed that the show was at 6 but once we got inside we had to wait another 20 min or so. Kye was content in playing with his Minnie and Mickey car but I don’t know if Daddy was thinking that Ariel was worth all this hassle 😉 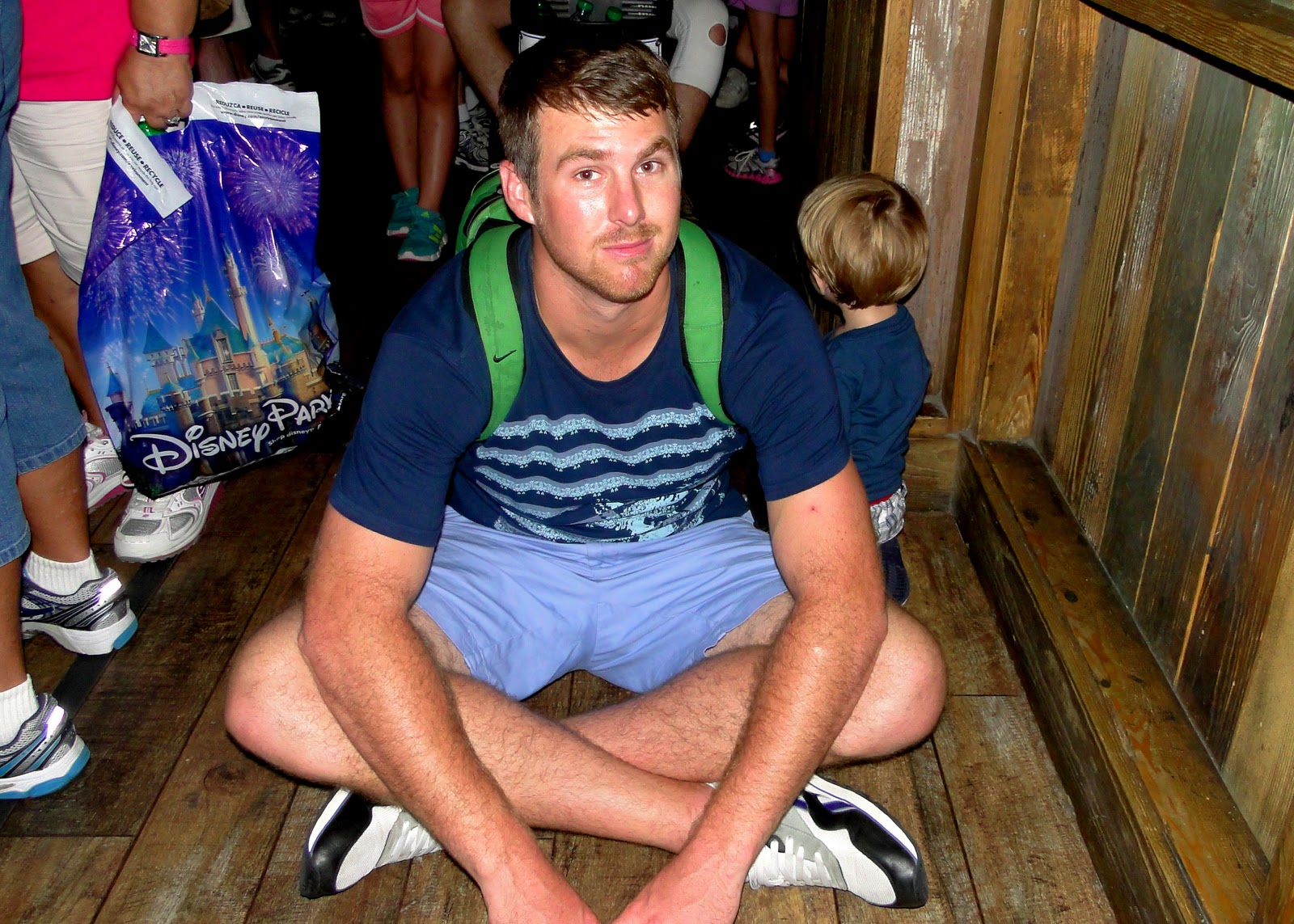 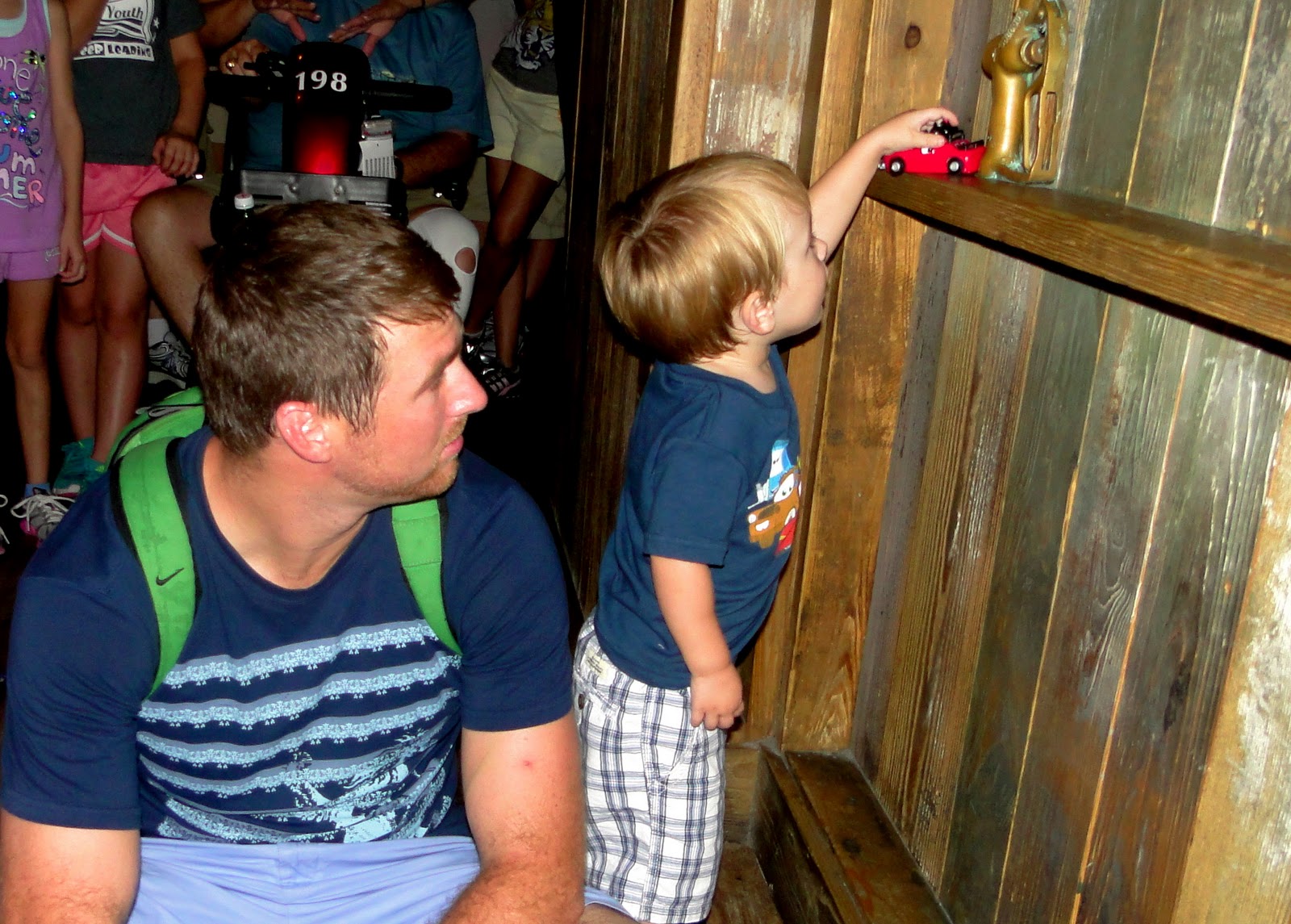 The show was neat (not my favorite or anything but it was cool!) and Kye enjoyed it. I’m glad we stayed for it and it was a good way to end the day! We headed back right when it ended and put Kye down for bed as quickly as possible. We all weren’t too far behind him 😉 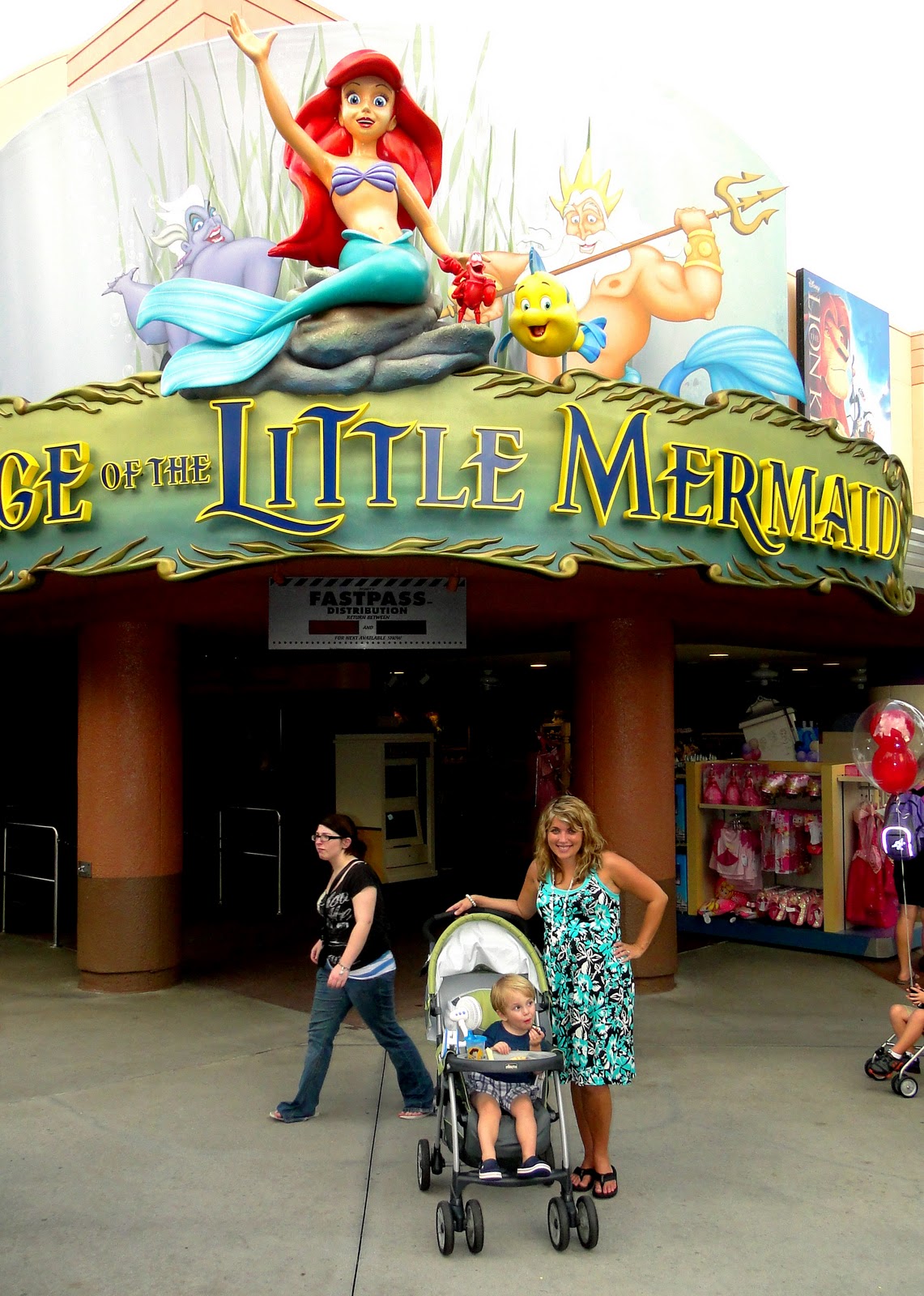 Our last day at the parks is coming up next!