This evening we had Leo’s 4D ultrasound! I really debated about when to schedule this one…for Kye’s we did it at around 27 weeks and Britt’s was around 29 weeks. I didn’t like how Britt’s turned out so I thought we’d try going earlier…so we scheduled Leo’s for 26 weeks!

This time around we tried out a new place! It’s called The Bump and it was much more affordable than our last ones and the room they use is WAY bigger to allow for more people. We invited Mr. Rusty, Mrs Charlotte, Little Mama, Big Daddy and Mema. Only Mr. Rusty and Mrs. Charlotte were able to make it but I LOVED having a HUGE room with plenty of comfortable seating for everyone! The girl who did the ultrasound was super nice as well and the kids did WONDERFUL!!!

They told me in order to get the best pictures to drink at least a gallon of water for each of the three days leading up to my appointment. I chugged water like a crazy person all day Sunday with our traveling so that worked out well. They also said to drink a glass of OJ about an hour before the appointment. Our appointment was at 6 so I brought some OJ with me to CFA and drank it before we ate dinner. With the appointment that late I figured it’d be good for the kids to get a treat for dinner and burn off some energy in the playground.

Both Kye and Britt made it easy on us for their 4d photos. Leo…notsomuch. BUT this baby did AWESOME for the 18 week ultrasound so I’m def not complaining! Right when I laid down the tech said “the baby is currently facing your spine” Perfect haha. Once he or she did move enough so we could see, Leo had both hands over his or her face! Stubborn already! 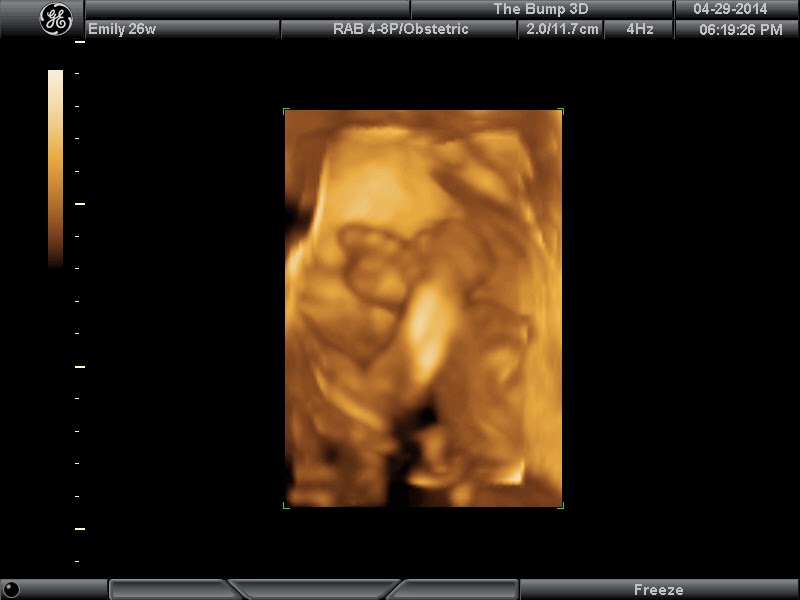 She went ahead and found the heartbeat while we waited, and hoped, for some change in position. I have to say…while I LOVED seeing the baby…I especially loved watching Kye and Britt during the experience. Britt was obsessed with hearing the heartbeat. She got so excited and kept asking to hear it again and again! The tech said she’s never seen a sibling as excited as Britt was! It really was adorable. And Kye reminded me so much of how he acted when we went to first see Britt’s ultrasound with him. He climbed up on the side of the seat he was sitting in so he could be up right beside me and kept touching me and even kissing on me the whole time. He was so protective and loving of his mama…I remember during Britt’s ultrasound he actually wanted to sit on the table with me the entire time. My precious boy! They were both so thrilled about seeing (and hearing) their sibling and it was truly one of the sweetest moments of this pregnancy so far! 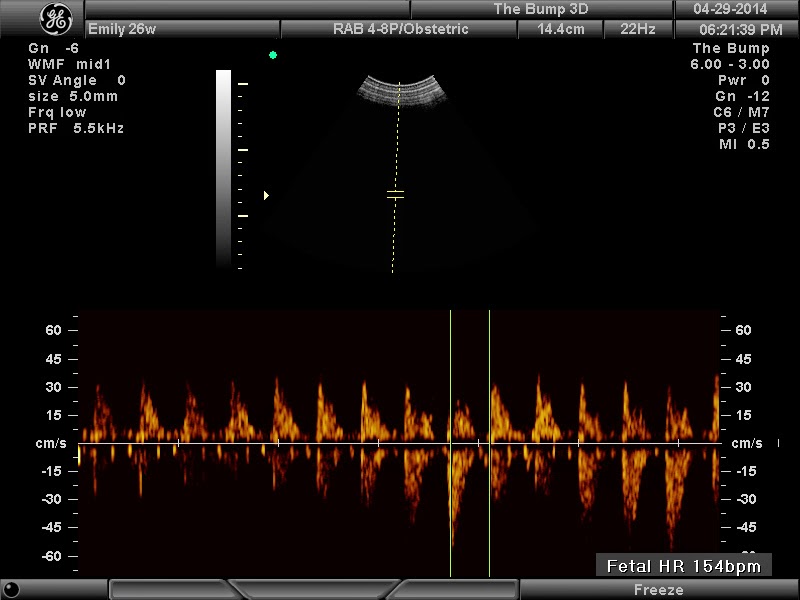 Elbow/arm in front of the face 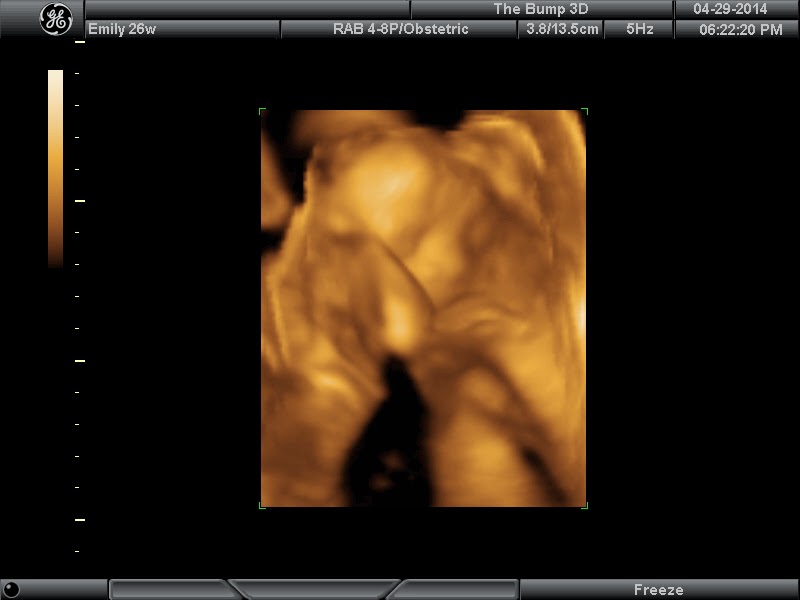 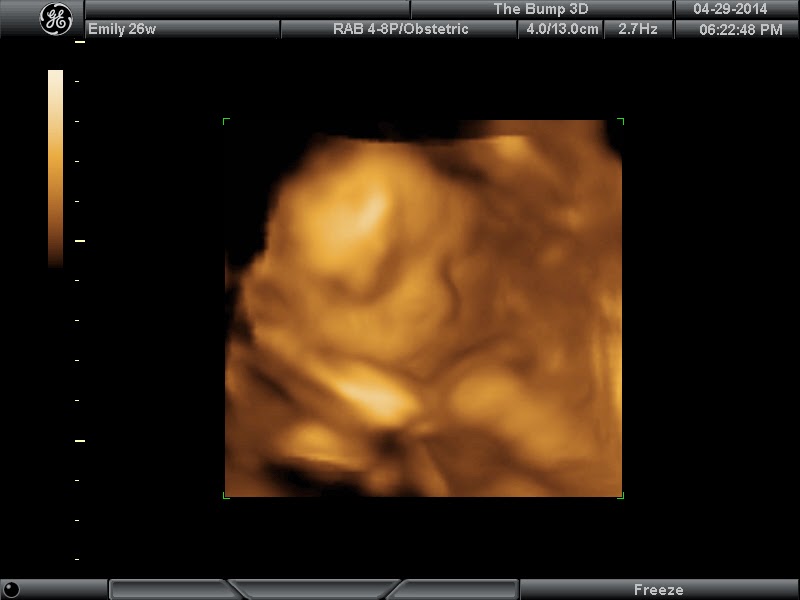 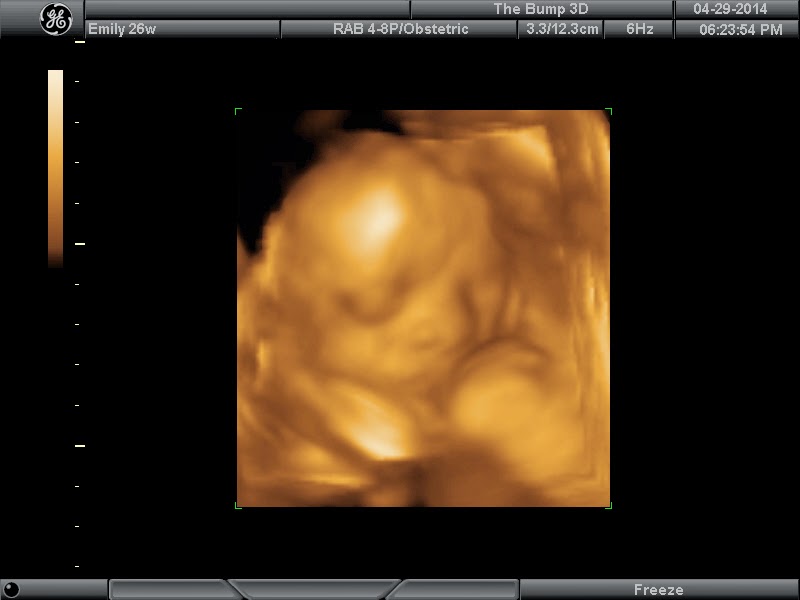 A little peak at the lips! 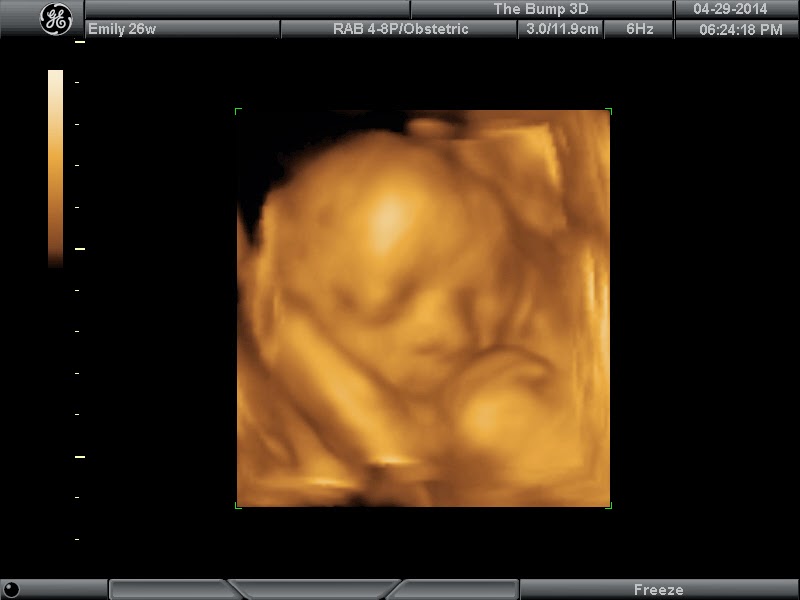 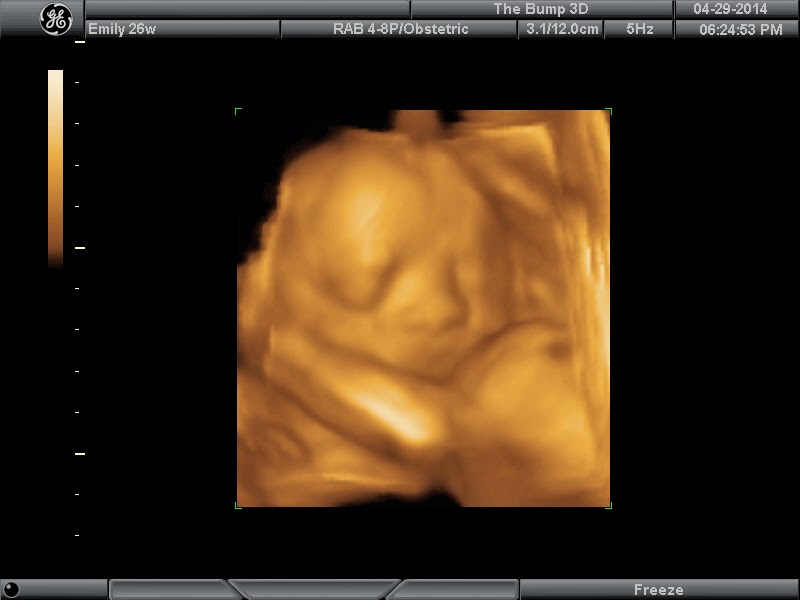 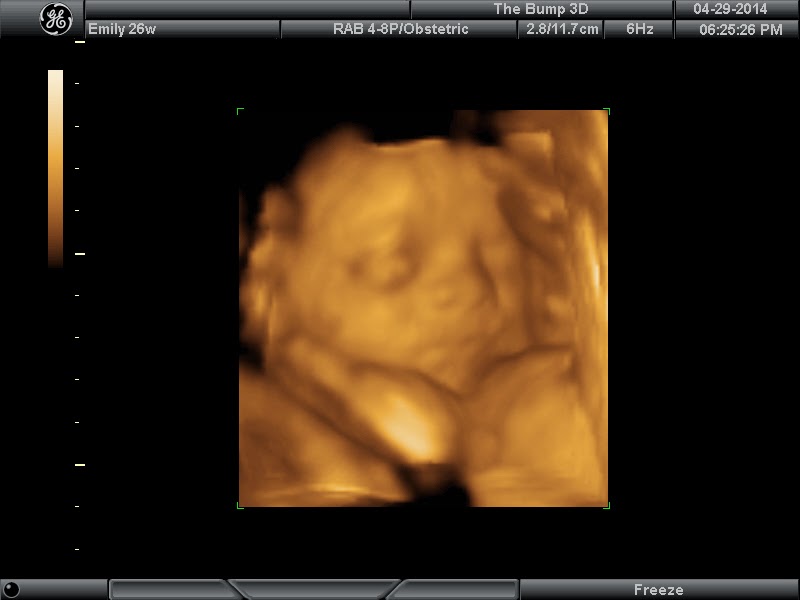 Big yawns! We kept joking about how Leo must be jet lagged from our travels! 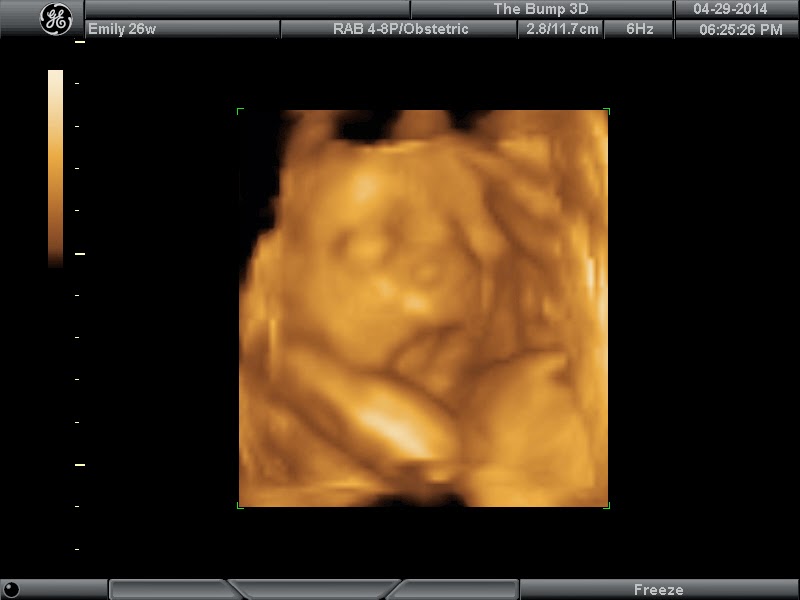 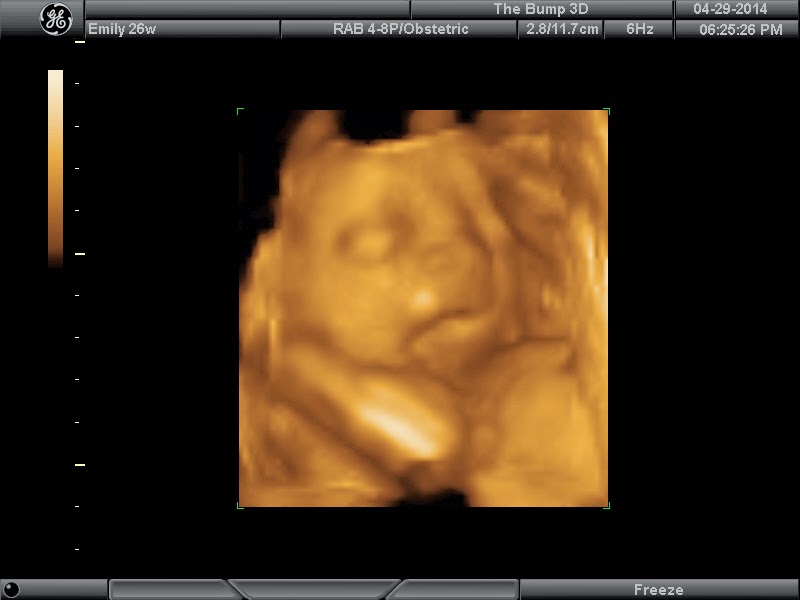 It’s cool to see the side shot of the yawning…very odd looking! 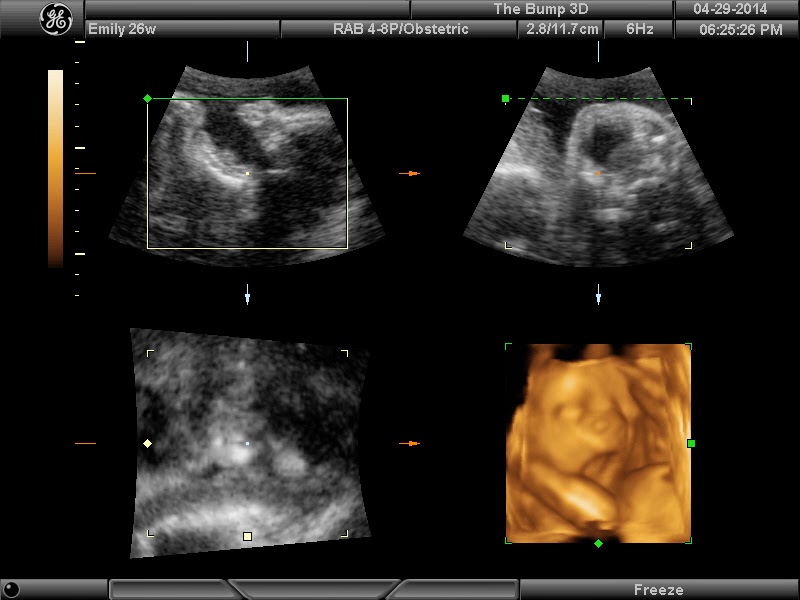 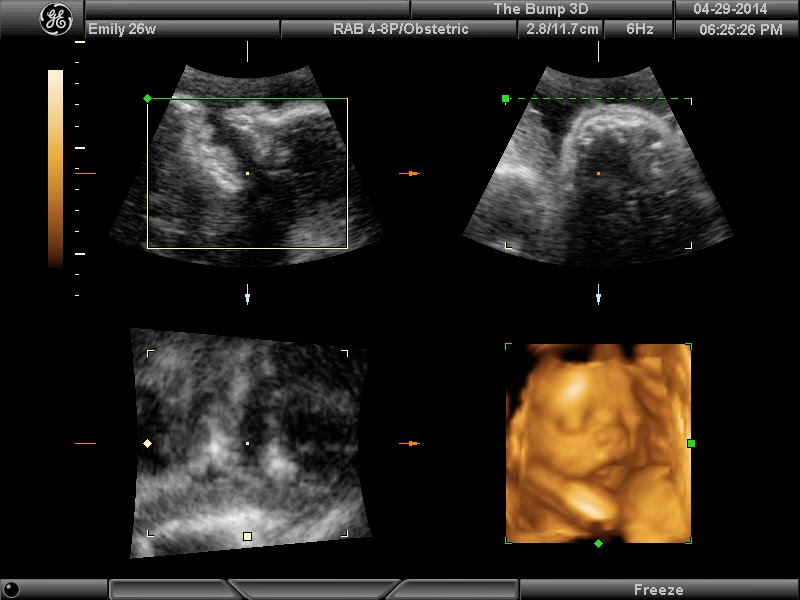 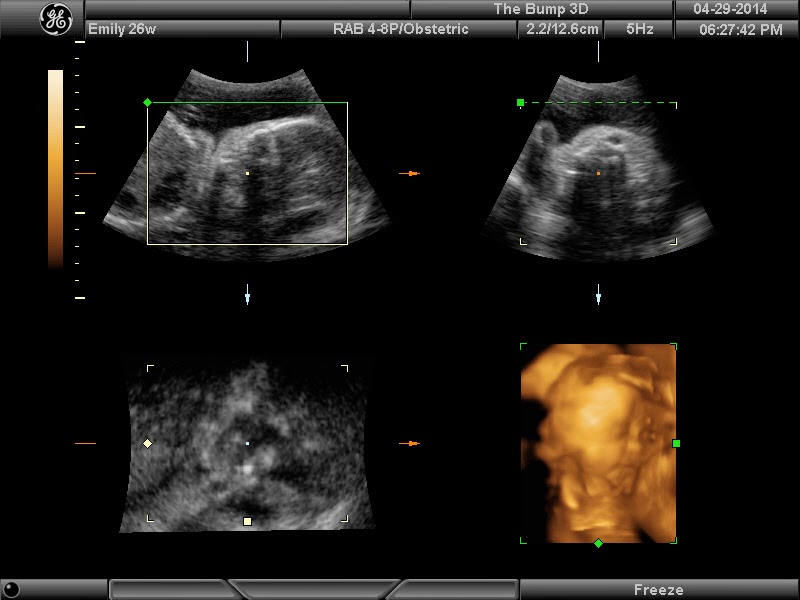 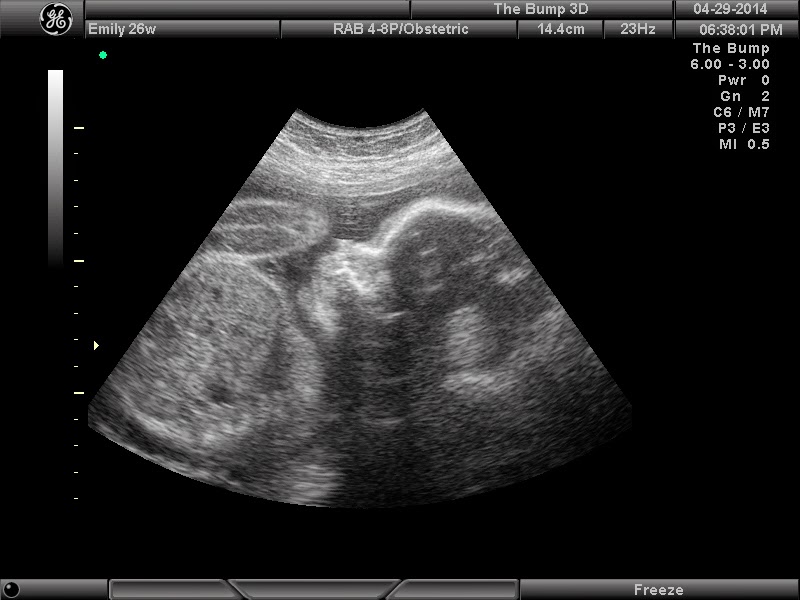 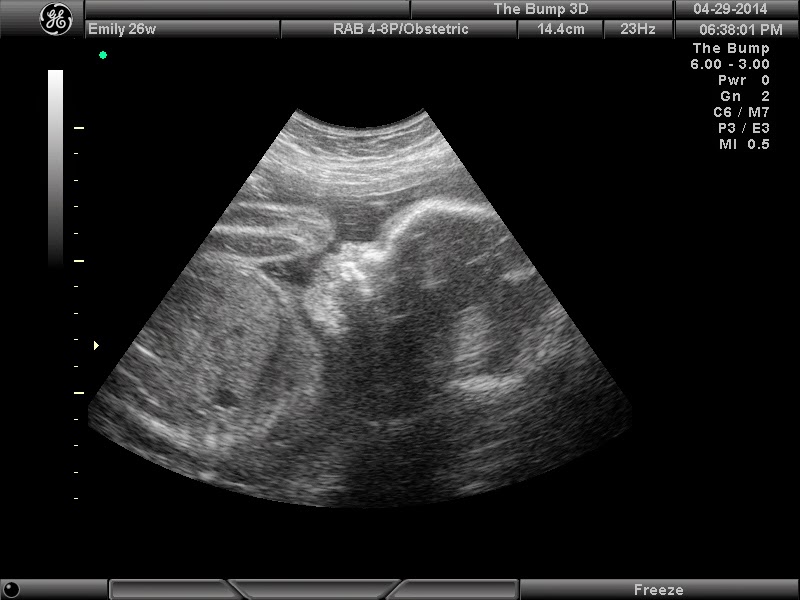 She said she could actually see that Leo was playing with the umbilical cord and that is why when we did get to see the lips that they did look somewhat distorted. Which also explains why Britt’s lips looked similar in her 4d! We tried taking a break and I drank some coke (which I hate…yuck!) and bounced on a ball in hopes that we’d get some better shots…but Leo wasn’t really having it! You can see the hand above the head! 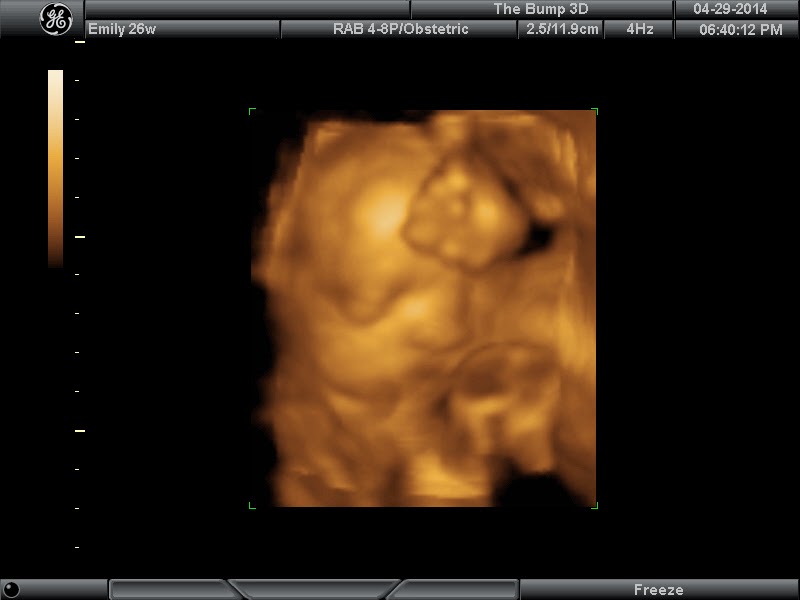 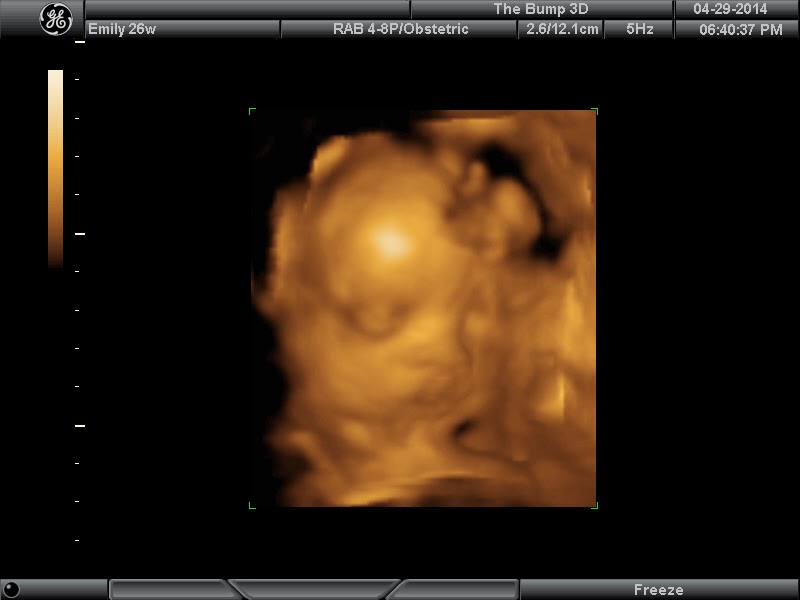 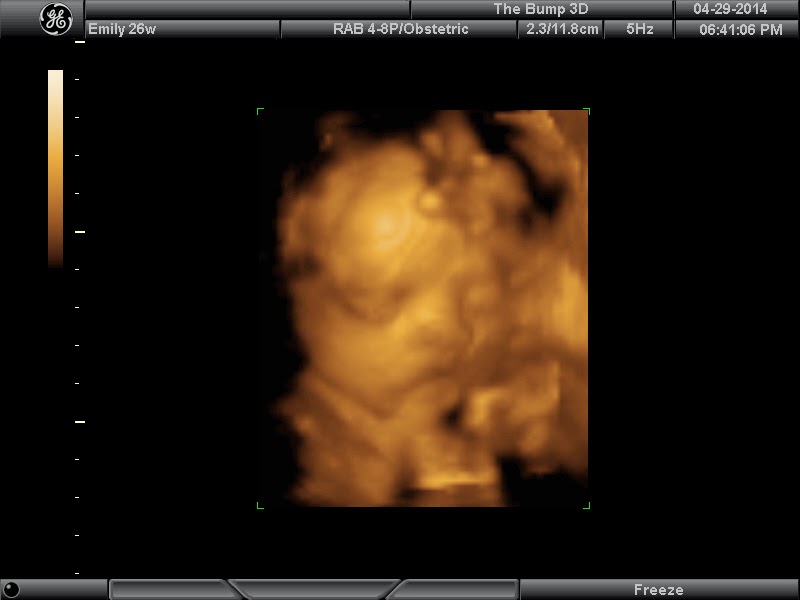 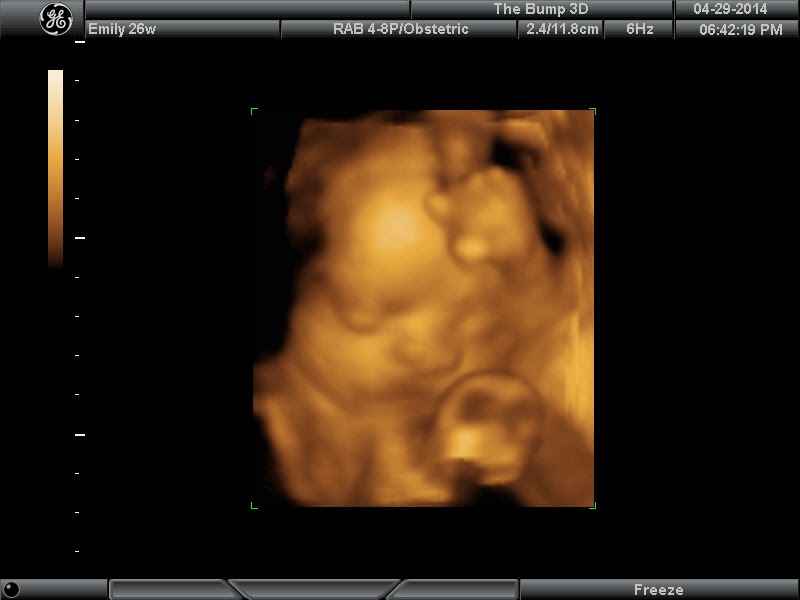 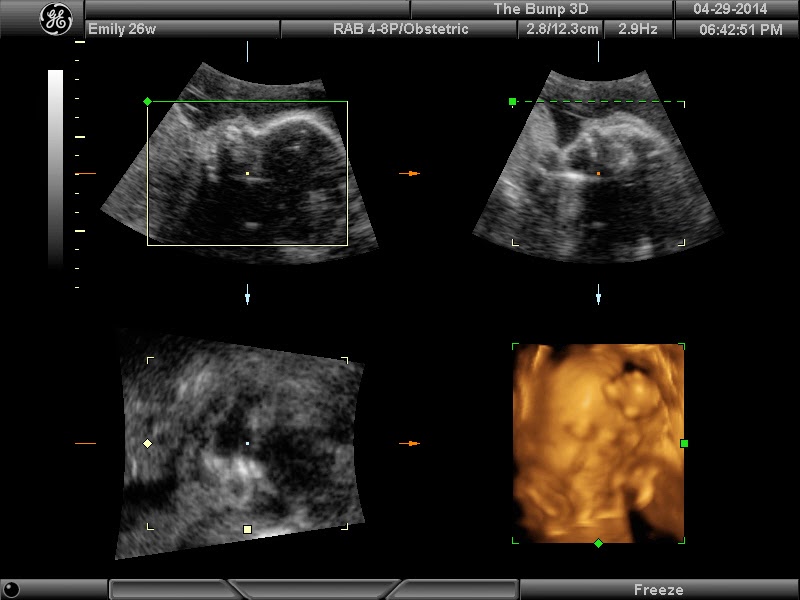 At the end she checked to see about any hair and you can see the fuzz on the far right side of this shot. She said this baby def has hair! 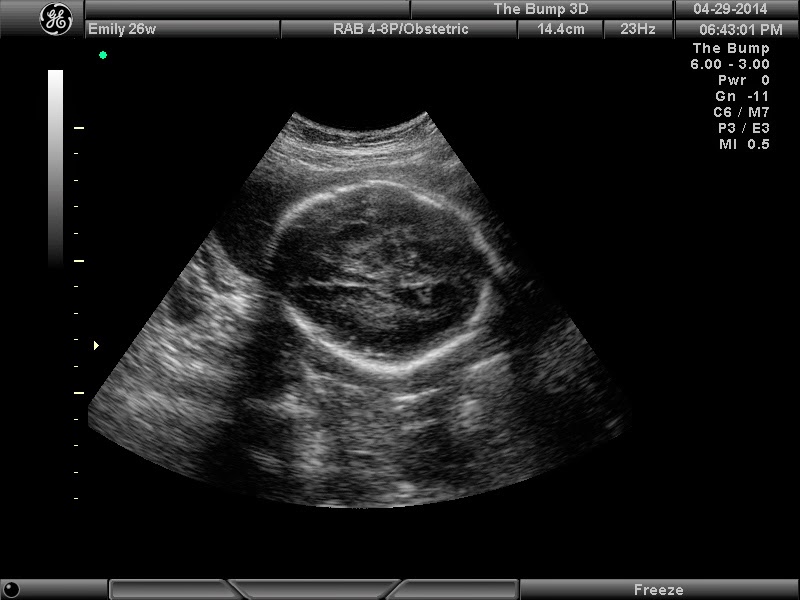 Britt asked to hear the heartbeat and I think we heard it 5 or 6 times total. It was too cute! And I never get tired of hearing that sound. So much so that we did go ahead and buy the stuffed animal they were selling. They recorded the heartbeat and put it inside the animal (we chose a Lion, of course, for our Leo!) and now we can all hear it anytime we want. The kids both LOVE it and know that it isn’t theirs…it’s Leo’s special stuffed animal and he or she is letting them share it for now. Kye took SUCH special care of it. It was raining when we left and he put it up under his shirt to protect it 🙂 And we listened to it like 1,000 times on the way home too.

Kye said he thinks it’s defiantly a boy and that it looks just like him. Britt says it’s a girl and that he name is going to be Charlotte 😉 I was super, mega impressed with both of their behavior and how truly interested they were in the whole process!

Even though Leo wasn’t super cooperative I am still glad we did it. I think it helped the kids to feel more attached to the baby and understand how real it all is (especially for Britt since she’s a little young to “get it” that I have a legit baby in my belly). When we got home Britt stuck out her belly and told me to listen to her baby’s heartbeat 🙂 Zach said he really enjoyed getting to see it all too and Mrs. Charlotte cried in the parking lot talking about how truly blessed she is with all these grand babies. 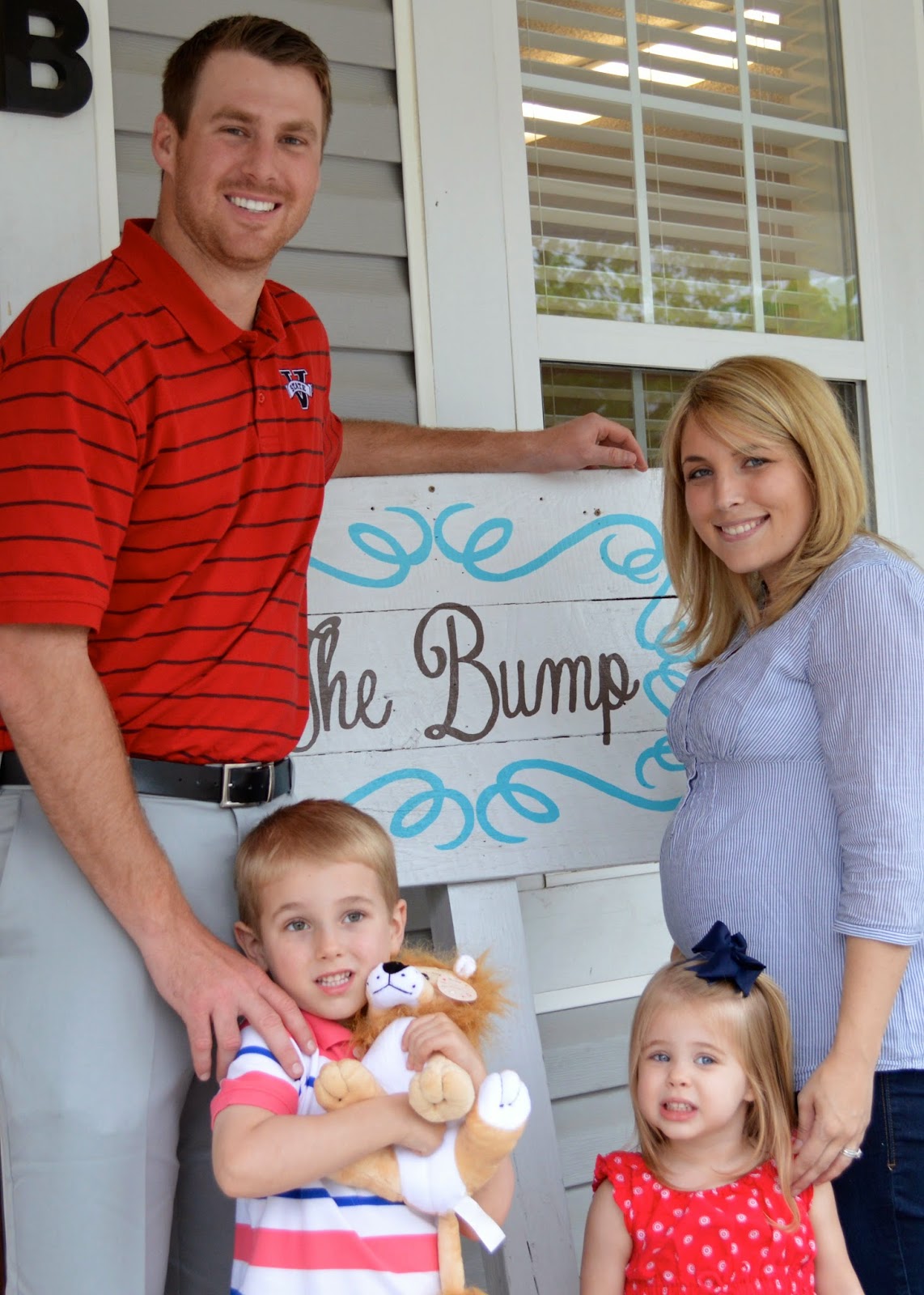 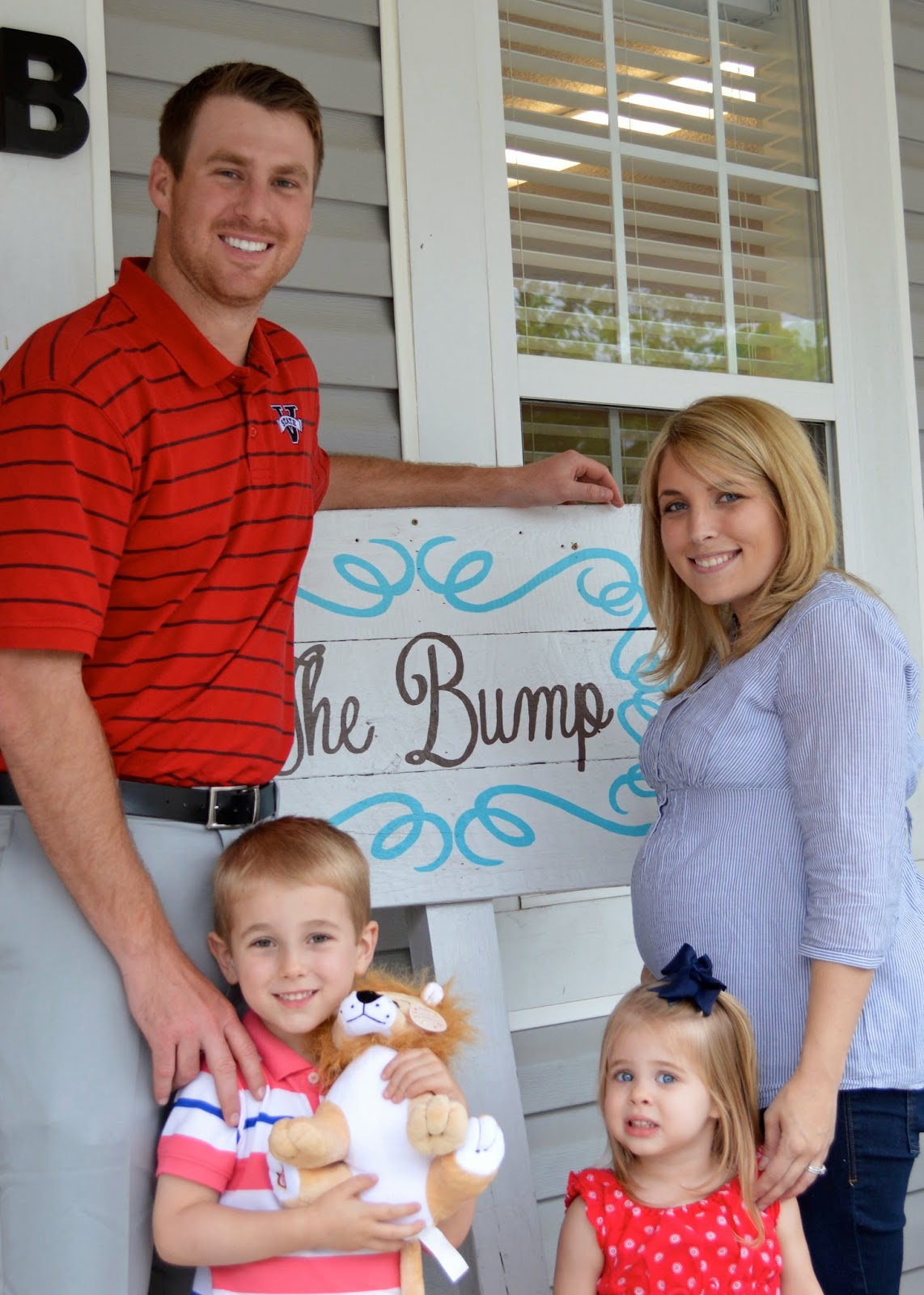 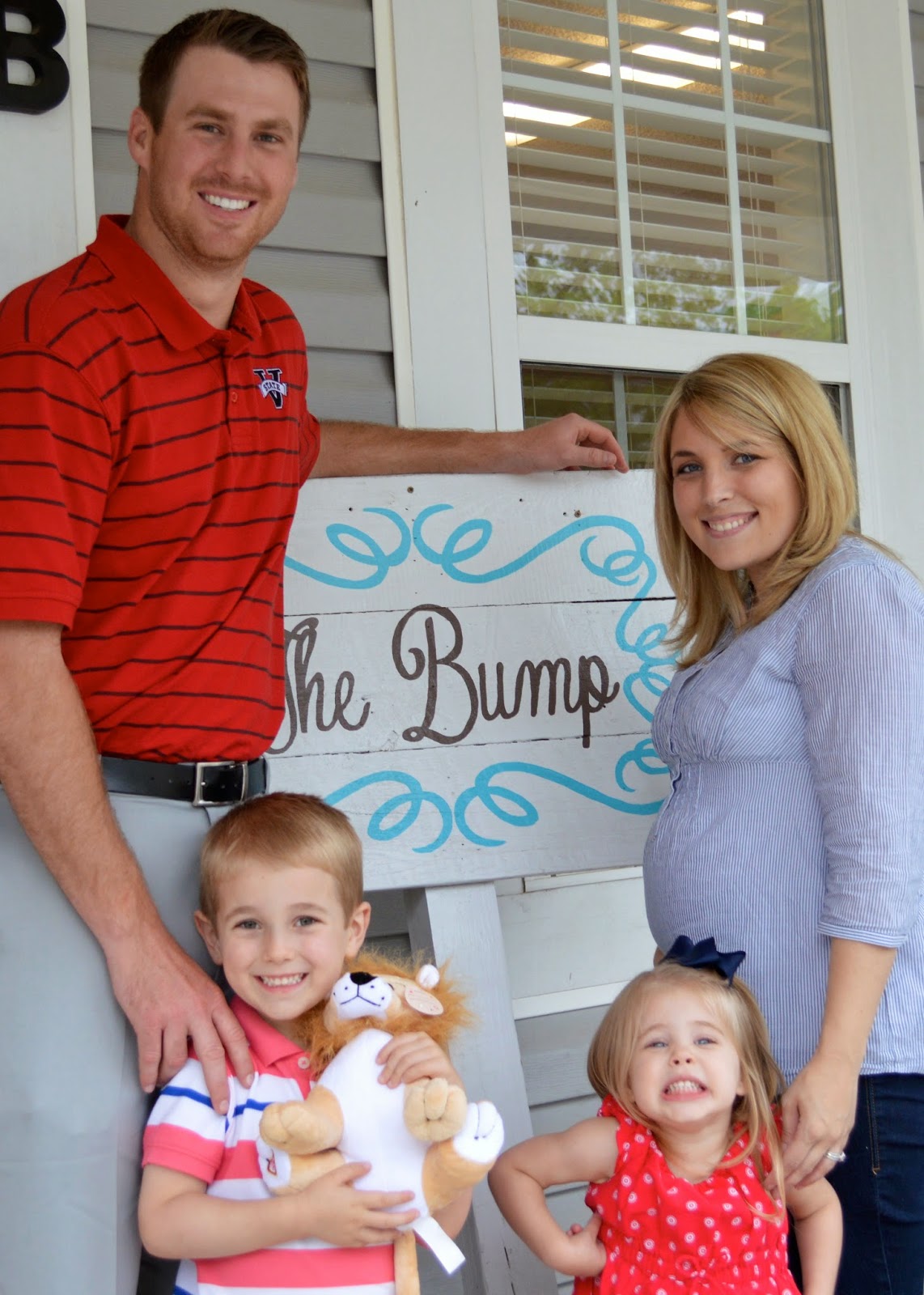 I’m so thankful Mr. Rusty and Mrs. Charlotte came with us! Mr. Rusty isn’t really into all the ultrasound stuff so it was sweet of him to come. I think they are both glad they were there and it’s crazy to think about how soon we will get to see Leo in REAL life!!! 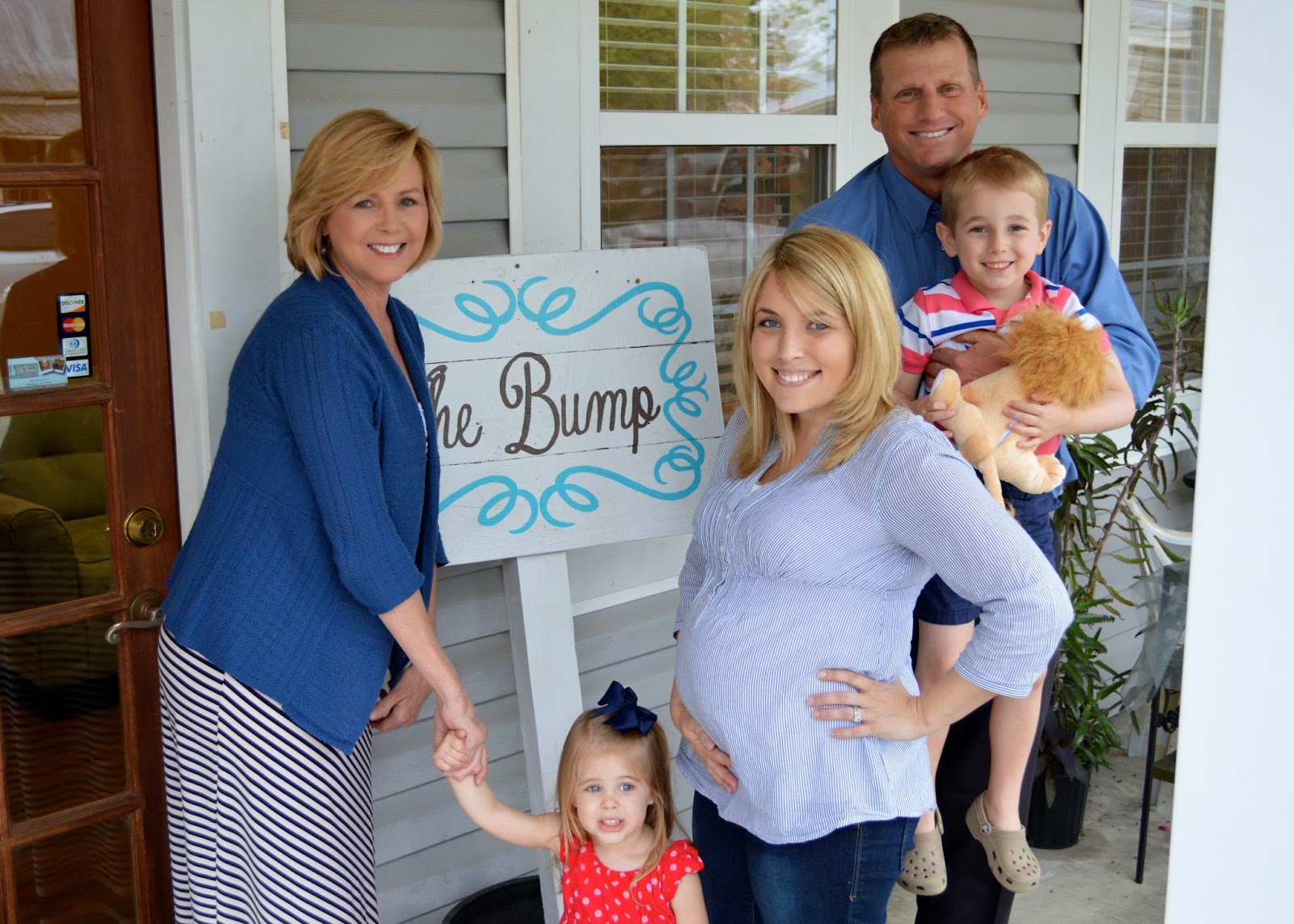 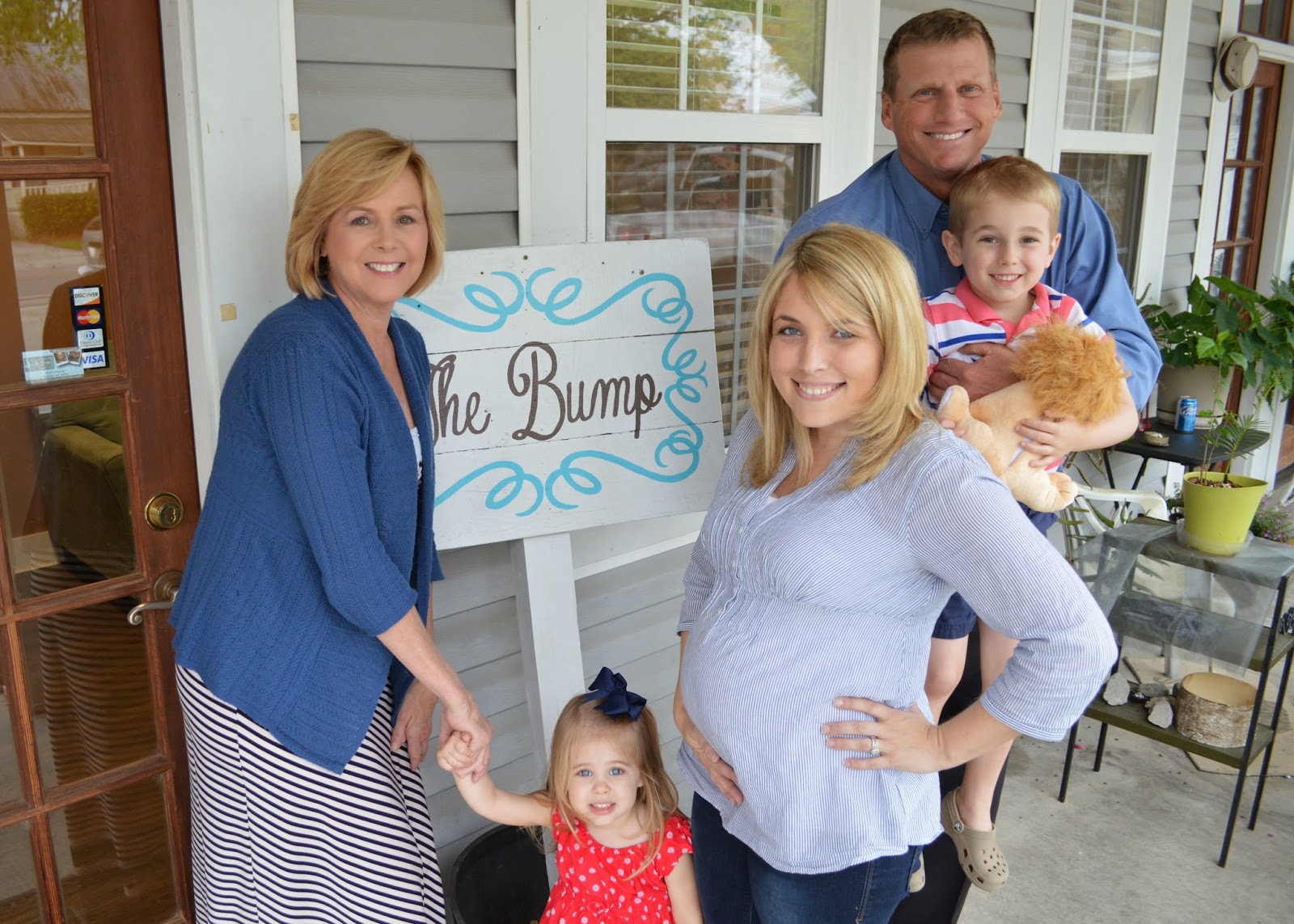 Before going to the ultrasound I pulled out my blog books and showed the kids their pictures from their 4D ultrasounds. During the experience we all thought Leo looked SO MUCH like Kye did in the womb. From Britt’s all I remember were those LIPS and she just really, really looked like a GIRL. Zach and I both thought Leo looked more masculine than feminine…at least if it’s a girl it’s not as obvious of one as Britt was. When we left Britt’s 4D we said it was either going to be a girl or a really pretty boy haha. Those lips just didn’t look boyish at ALL! I remembered how “serious” Kye looked and thought Leo looked the same way. And the eyes reminded me of Kye’s too in the way they were set and size and also the lips being smaller. However, now that I’m home I do think Leo looks more like Britt?!?! Maybe it’s just because they both had the umbilical cord up by their faces? Based on these, Leo is def the most “chubby” of the three with those big cheeks! I for sure see more of Britt’s nose than Kye’s nose, don’t you? These were all taken at different weeks in pregnancy too so I know that does make a difference. Leo may look chubbier due to that! I def thought his or her hands looked much chunkier than either Kye’s or Britt’s did during theirs! 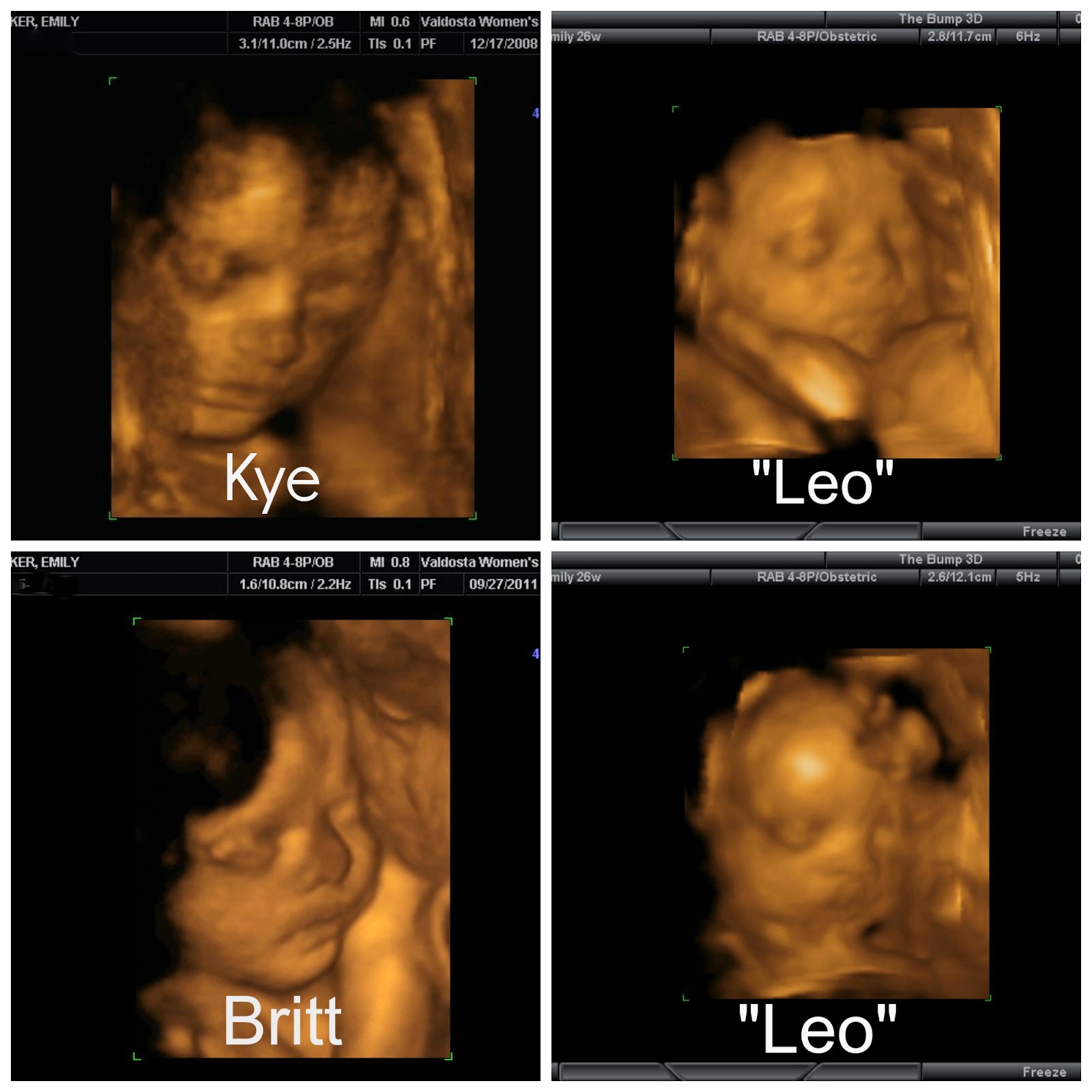 I hate we didn’t get some super amazing shots of this baby, but I still enjoyed the experience and really thought The Bump was a great place! I loved the space, how laid back it all was, and that we didn’t have a limit on who we could invite. We didn’t get some big fancy package, but I thought it was just enough and especially LOVE the stuffed animal!!! Can’t wait to see who you think Leo favors more…it’s so hard for me to decide?!?! You can look back at Kye’s full 4D ultrasound here and Britt’s here!