The sippy cup has been somewhat of a struggle for us. I started when Kye was a little over 6 months old to offer him some water in a Nuby sippy with handles. He took to it pretty well and even drank breast milk from it occasionally without much issues. My problem with the transition was actually my breastfeeding. Since Kye only had bottles a couple times a week it was hard to get him used to drinking from the sippy. Especially since the only time he did get bottles was when we were going places that would be too hard to have him try the sippy first like church, restaurants, and such.

I kinda of gave up on the sippy thing for awhile and just offered it to him after he ate solids with some water in it. He would drink from it, but he mostly just played with it. When I went to introduce formula I was tempted to introduce it in a sippy and not a bottle but I knew he’d have a hard enough time getting used to drinking something other than breast milk so I didn’t want to push my luck on that one!

Now that Kye is 9 months old I feel like it’s time to be done with the bottles. I decided to wait until I was done nursing him at his night feeding and that I would just give him the sippy without any other option. No more of the sippy first followed by a bottle if needed thing. He KNEW he’d be getting the bottle so he’d just fuss until he got it.

I also changed up the type of sippy I was using. Mrs. Charlotte actually told me that she’d try the Take and Toss Sippy. It doesn’t have handles so it’s more like the bottle in that he can hold it the same way. It made a lot of sense to me!!! Yeah the “nipple” is hard plastic instead of soft like the Nuby one but I started giving it to him with water after his solids and he did awesome with it. He learned how to tilt it back and could just handle it so much easier. Plus these are mega cheap so I’m all about that!

Once Kye started holding the bottle on his own last week and feeding himself I decided it was time. I had already planned on dropping the 7:00 pm nursing session so it worked out great! I thought I’d just do it the same way I did the formula introduction! I am so thankful that I didn’t 100% follow Babywise on his solid schedule. The book says to feed him solids at his 7, 11, and 3 feedings and I instead to them at the 7, 11, and 7 feedings. This has been great for us and made it even easier when transitioning to both formula and the sippy cup.

What I did is probably considered a little on the unorthodox side but whatever. It works and I’m sure I’ll do it again. I waited until 3:45 to feed him as I knew he’d be more hungry by then (his 3:00 feeding is actually more of a 3:30 feeding now) and I offered him his formula in the sippy. He didn’t like it. Just like he didn’t like it when I first introduced the formula at this feeding. With the formula though he was polite about not wanting it and pushed it away and cried. It was SO tempting to just cave in and give him the bottle but I didn’t. Zach helped me to entertain him and I felt so bad because I could tell he was pretty hungry but I continued to offer it to him and he wouldn’t drink it. When it was time for his 7:00 feeding (which is actually now a 6:15 feeding) I heated up the breast milk and put it in the sippy and gave it to him and he drank it all! 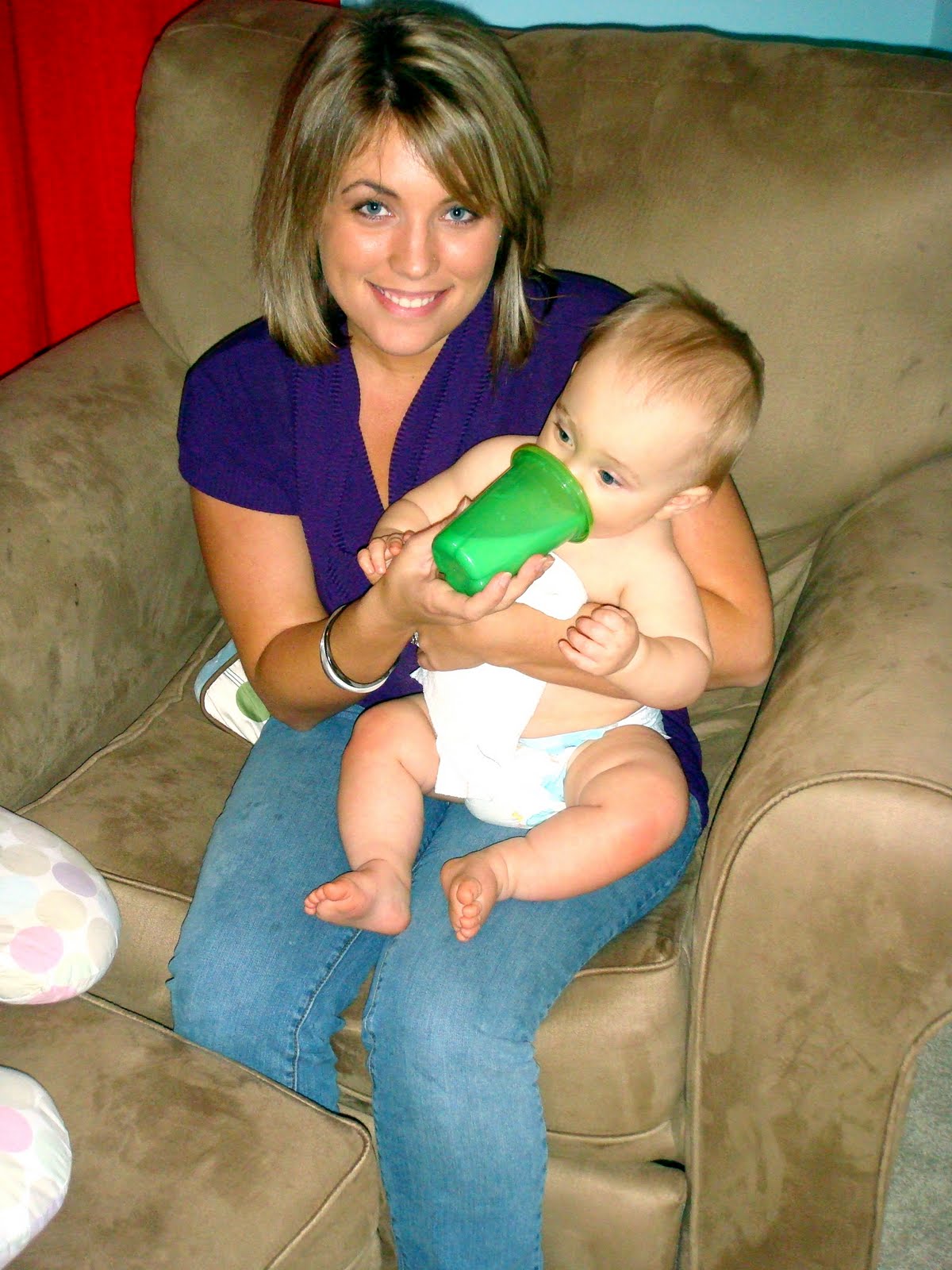 That was on Thursday and we haven’t looked back! I nursed him that next morning as usual (I’m just not ready to let go of that morning feeding yet…he’s so sweet for it!) and then I offered his other liquid feedings in the sippy. He honestly wasn’t very happy about it at all. He was pretty fussy and would push it away but he’d drink it! Yesterday was the first day that he seemed to be 100% fine with the sippy. I still heat up his milk in the bottle and transfer it over so that’s a little stressful because I have to make sure he doesn’t see the bottle but he’s doing much better! I know a lot of people probably think it’s bad parenting to let him go hungry but I really don’t know of any other way to do it.

I tried the idea of letting him drink as much as he would from the sippy then going to the bottle but he figured it out that he’d be getting the bottle if he was fussy. I honestly think that was a big mistake! I think he would have been MUCH sweeter about the whole thing if he didn’t think that he could have a bottle if he fussed about the sippy enough! Next baby I will probably do the same thing I did this time. At 6 months I’ll introduce the sippy with water after eating solids then at around 9 months I’ll just switch to the sippy 100%.

He still hasn’t figured out that he can hold the sippy yet so I’m basically giving it to him like a bottle but I think he’ll catch on pretty soon. I’m just glad I set a goal to accomplish this month and that we did it! Right in time for the holidays and I’m so glad to be packing up my bottle drying rack, nipple dishwasher holder thing, and all the little bottles! Our next big move is saying goodbye to baby food!!!