I had my first OBGYN appointment on Wednesday Dec 4th. That is the most annoying part of finding out you’re pregnant: the waiting! It was the soonest they could get me in with Stacy so I took the appointment even though it was at 10:40 and I have to pick Kye up at school at noon.

My lies continued as I told Mrs. Charlotte I had a foot appointment so she could keep Britt. I knew the first appointment included lab work and there is no way I could handle her and not freak out about the labs. Since the appointment was so late I got there really early…they told me if I got there early I could hopefully get in early so I did it!

Prior to my appointment the office called to go over ALL of my medical history with me. They asked about my prior deliveries and said my notes said I HAD DRUGS in my IV. Um no. I got crunk about it and told them I better not have had drugs in my iv or there was gonna be a lawsuit! She put me on hold and did further research on my charts and came back and said that whoever did the report she had been reading just checked “yes” to drugs probably b/c everyone usually gets them but that my records don’t show any were administered. Whew 😉 I knew they didn’t give me any b/c I got the itemized bills at the hospital and I wasn’t charged for any but still I was a little nervous!!!

When I got there I waited 90 minutes. Legit. When I finally got called back I had 10 minutes (literally) before I had to leave to get Kye. I HATED that it was so rushed but I had no other choice. Problems with a third pregnancy right? You have two other kids to be worrying about too 😉

Zach didn’t go to the first appointment b/c I looked back and he didn’t go to Britt’s first one either and he really needed to work. I’m so glad he didn’t come b/c he would NOT have done well with the waiting!!! I ran into several people I know and just said “ugh, getting my lovely yearly check up (eye roll for effect)”

While I didn’t have long Stacy and I covered quite a few things at the appointment!

When we were done I had to BOLT out. Like I didn’t have time to pay or make my next appointment or get my labs done. Nothing. I was RACING to get to Kye’s school (I was late). It was tricky b/c I had told Mrs. Charlotte I had been at the foot dr and they are NEVER late so I had to lie lie lie some more. So thankful all this lying is behind me 😉

My second OBGYN appointment was on Friday December 20th. For an ultrasound!!! Yay! Since I didn’t have one with Britt until like 18 weeks, I was SO excited! I was very, very sick that day and was eager to see my baby and make sure everything was okay.

Due to me being sick and some insurance issues we didn’t do the lab work at that appointment either. I actually just went up there today (Dec 27th) and got it done finally!!! They told me my hemoglobin looks good…no clue what that is or what exactly the labs even check for but I’m glad it was good 😉

Casey and Jordan had an appointment Friday morning as well so they took the kids for us after they got done with their visit so we could see the baby just the two of us! Since I am so early they had to do an internal ultrasound, which I’ve never had before. The wand they use is MEGA intimidating but it wasn’t painful at all! The lady who did the ultrasound was very, very nice and lives in our neighborhood (I was MEGA out of it and totally didn’t realize I’ve even been to her house before for a game night haha).

Up until that point it all wasn’t feeling very real to me yet. I either didn’t feel like I was pregnant (like to the point of being in denial about it and having to leave the positive pregnancy test out on the bathroom counter so I could look at it all the time to remind myself) or I felt like something was wrong with the baby (that devil will try to steal joy!!!). Seeing the baby pop up on the screen didn’t give me that ah-ha moment. I mean it’s a little blob right now 😉 But when we could see it’s little heart pumping and hear it…it became REAL. I told Zach “It’s gettin’ real now!” And I meant it! It was so, so, so, amazing and awesome and perfect.

The baby is on its side so it’s a profile view. If it had been a front view she said we would have been able to see limbs! Dangit! I wish we could have seen that but I’m just happy to see what we got to see!!! The black hole is actually the brain! It’s so neat to me how this early on there isn’t even an umbilical cord yet. Our little baby is just floating around in there hanging out 😉 The heartbeat was 167 which is so strong and made me feel teary eyed and I was measuring exactly correct on my due date of August 1st! 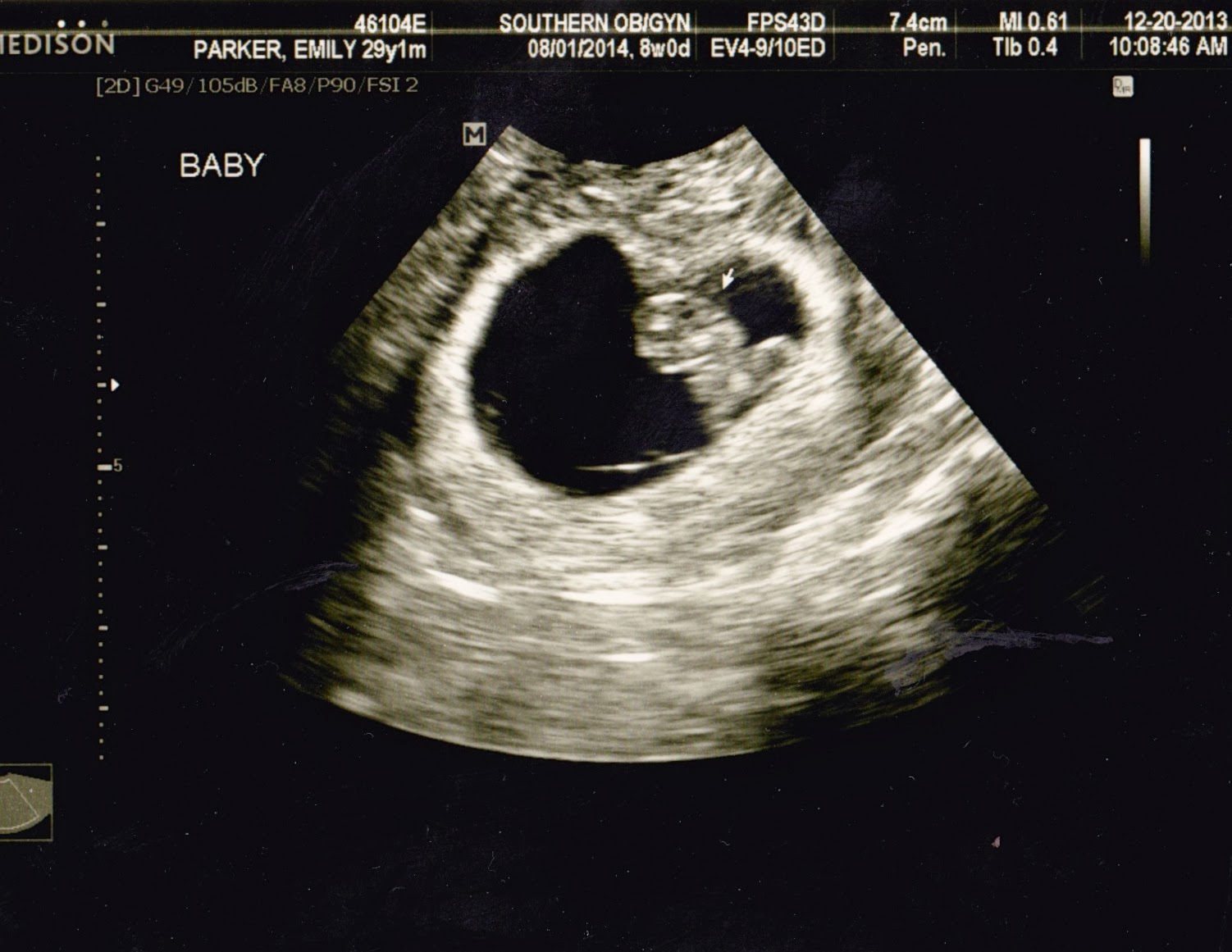 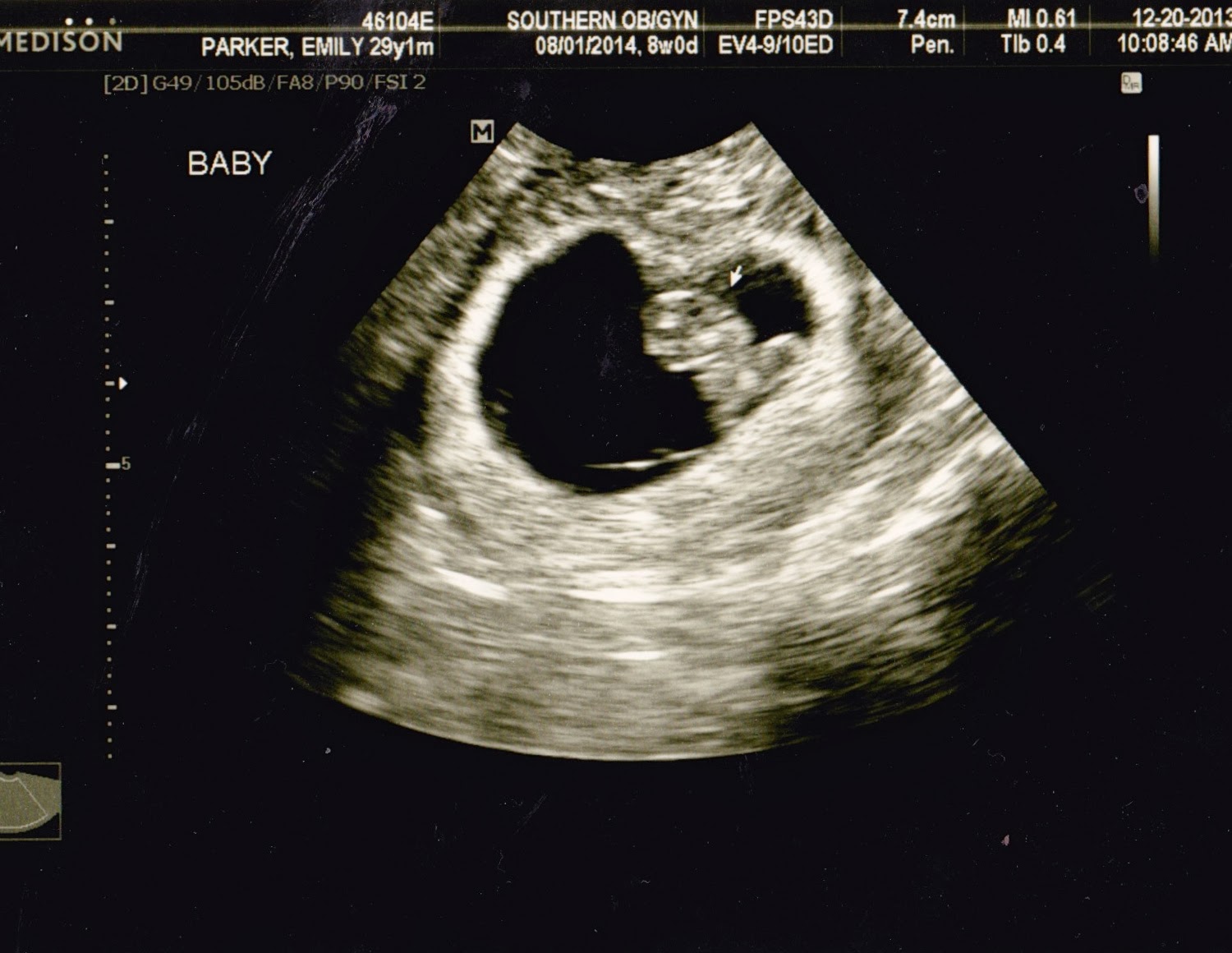 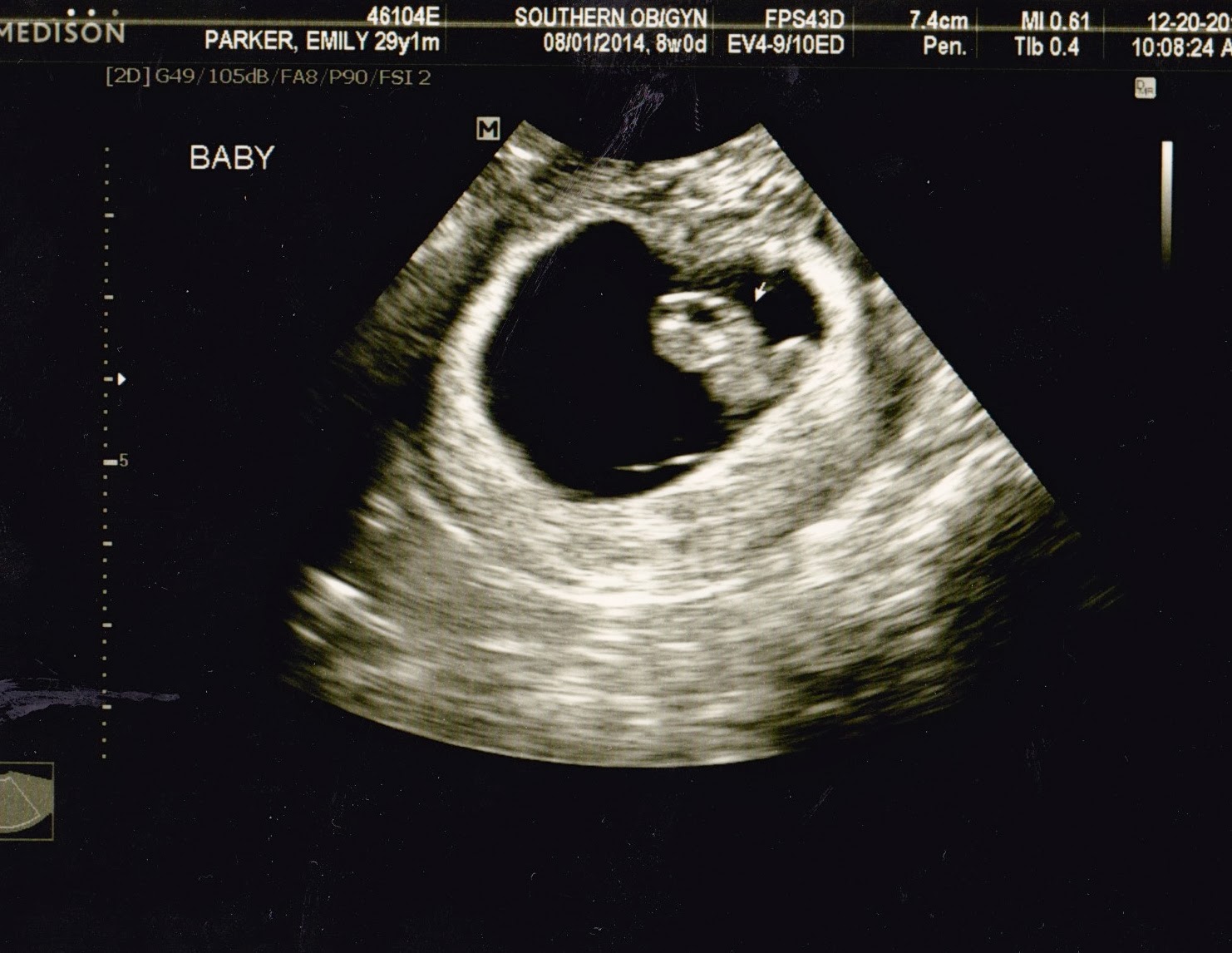 With all my early strong symptoms I had actually done some “signs of twins” googling haha. Usually Zach is the one who questions whether it’s one or two but this time I was the one questioning it! He is pretty overwhelmed at the thought of having three kids and couldn’t even begin to wrap his head around the idea of four right away! Thankfully, it’s just the one baby 🙂 No twins for us!!!

Once we got back to a room Stacy walked in and said “ultrasound looks perfect!” right away which made me SO happy. After having that fever and the spotting issues it felt SO amazing to hear that our baby is perfect!!!

We didn’t have many questions and it was a quick appointment. But I did ask again about my back since it’s really bothering me and Zach had suggested epsom salt baths. Stacy said it’s worth a try! Also in my state of sickness misery I noticed a LOT of discharge “down there.” TMI but my junk has it’s own weather system normally anyways. Pretty much every time I get an OB check they do cultures to see if I have a bacteria infection b/c there is so much going on downstairs. This discharge though was a lot. Like I was standing up naked in my bathroom and a gush came down my leg (gross, I know, trust me I lived it!). I was concerned it could be amniotic fluid or something??? So she went ahead and checked me and ran labs on it to check everything out. She said no call was good news and I never heard from her so I guess it was fine! Now that I’m doing better with my sickness all that mess has calmed down too so it was probably a reaction to antibiotic or something!

I don’t go back until Jan 17th and I don’t think I get to see the baby again until 18 weeks but I will just be happy to hear that heartbeat again. Best sound ever!!!

Here is my first ultrasound with Britt (17 weeks) and my first one with Kye (which we thought was 8ish weeks but was actually 11 weeks!)

Seeing our sweet baby made it even more exciting to get to tell the family Christmas morning and made me more confident about announcing our news to the world!!!