First off I owe everyone an apology! I know I’ve made a lot of people nervous about this ultrasound since I didn’t post this sooner and I didn’t update facebook…life is busy!

We left St Augustine at 8 (after I slammed my fingers in Zach’s car door so hard that the door actually shut on them! Mega painful!) and I got out my ultrasound instructions in the car…if you haven’t noticed I’m pretty big about rule following so I did exactly what it said. I drank 32 oz of water and finished drinking it all at least an hour before my scheduled appointment time. I started drinking at 8:30 and finished at about 10. When we pulled up to our house at 10:15 I was DYING. Like bent over in pain I had to pee SOOOO badly!!! I raced in the house to get myself and Kye ready to leave for the appointment and walked in the door to a loud meowing sound. Turns out Zeke, our cat, somehow got locked in the nursery the whole time we were gone. We were gone for 4 nights people! I’m thankful he was alive, but I wasn’t so pumped about dealing with the cat pee in the room. I had to pee so badly myself that I couldn’t even process the cat situation…I ended up peeing 3 different times before we left the house. I just let out a little trickle in hopes that it would give me a small bit of relief. Um nope.

We drove two cars to the appointment because I was going straight from there to the grocery store. On the way to the appointment I could barely drive I had to go SO BAD. I realized my body wasn’t physically going to hold it anymore so I grabbed a handful of napkins, stuffed ’em in my panties, and went for it. Yup. I wet my pants! When I got to the office I RACED in the door – pants fully unzipped – and ran to the check in desk. I told her I wet my pants and couldn’t hold it anymore so she told  me just to go and I could replenish my water intake. I was just SO worried about the baby being healthy and that if I didn’t have the full bladder that the ultrasound wouldn’t work. I took it a little too seriously huh?

When we got in the ultrasound room I immediately told the girl that we don’t want to know the sex. And that we didn’t even want her (or Stacy or anyone else) to know. Kye was pretty fussy (we kept him up the latest he’s EVER been up the night before to see the fireworks so we weren’t surprised) so we accepted the sucker she offered him. It really helped!

The first thing the tech said was “Oh my! Your bladder is SO FULL!” haha. Told ya I went overboard. There is officially ONLY a Blitzen (not twins! just the one!) and he or she is healthy!!! YAY!!!! SUCH a huge relief for us for sure. On the way home that morning Zach asked how I was feeling and I told him that I just really felt that something was wrong. That everything going on around me was God’s way of helping prepare me to handle the news that we were going to hear. Finding out that Blitzen is healthy was actually a surprise for me. Even after seeing him or her I still felt this overwhelming emotion. I actually almost cried when I was talking to Stacy!

Kye thought it was really neat to see the baby on “tv” and kept looking back and forth from my stomach to the monitor. He also gave the baby kisses once we got the pictures printed off and told Mom (when she came by to see them that night) that it was the baby and it’s a sister. Blitzen is measuring big at 9 oz (my due date showed up at Dec 3rd rather than Dec 9th – meaning at the appointment I was measuring 18 weeks 3 days pregnant instead of 17 weeks 4 days) but they won’t change my due date so I’m even more thinking that I’ll have this baby early (are you keep notes to enter your guesses soon?). The heartbeat was the lowest I’ve ever had a baby have…only 134! It’s still perfectly healthy, just low. If you’re also keeping notes to guess the gender…supposedly a high heartbeat is a girl, low is a boy (however Kye’s was ALWAYS high).

She had to do measurements of the feet so she told us to look away just in case she accidentally saw the sex. She didn’t stop and look at it (just scanned over it to get to the feet) but she did say out loud that in her sweep she couldn’t tell the gender. I was glad! Zach, of course, assumes it means “girl” because with Kye she could tell right away (but with Kye we also had her LOOK to see IF she could tell, this time we told her NOT to look).

We have a dvd of the whole ultrasound and I’m going to try to get it up on youtube if I can figure out how,  if I’m able to do it I’ll re-direct you back here to watch 🙂 It was neat to see him or her scratch his or her little face. 🙂

She took a bunch of pictures for Stacy to review but gave us three of them to enjoy and share with you! I didn’t want to ask her too many questions about the health of the baby because I know if something was wrong that she couldn’t be the one to tell us but she did say that everything looked great 🙂  I wish my nerves hadn’t been all over the place (and that my body wasn’t reminding me non-stop how badly I needed to hit up the bathroom) because I would have pushed for some better pictures. Guess it’ll give us more to look forward to at the 4d ultrasound! The big thing we noticed was that Blitzen has a MUCH smaller nose than Kye did 🙂 You can see Kye’s 18 week ultrasound here. Now re-looking at Kyes I appreciate how GREAT these turned out!

is it just me or are the skull pictures super creepy?﻿ 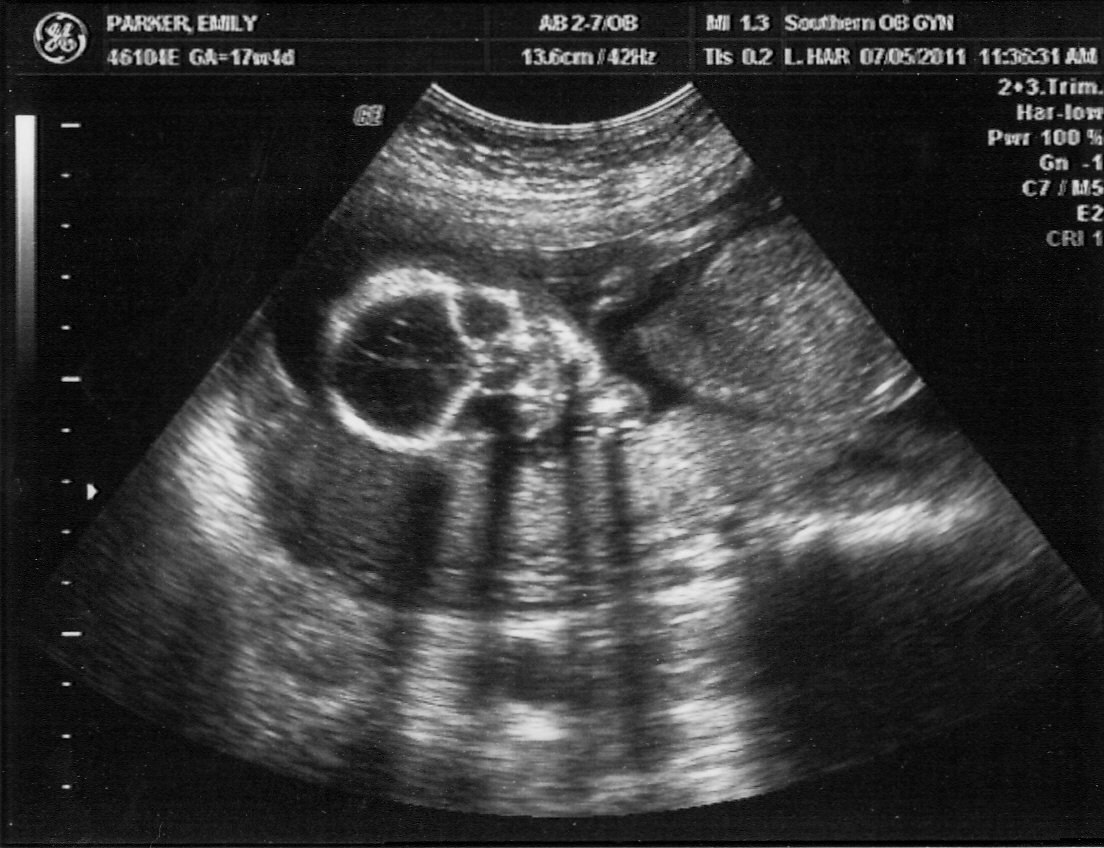 ﻿love how scrunched up he or she is where you can kinda make out the toes! 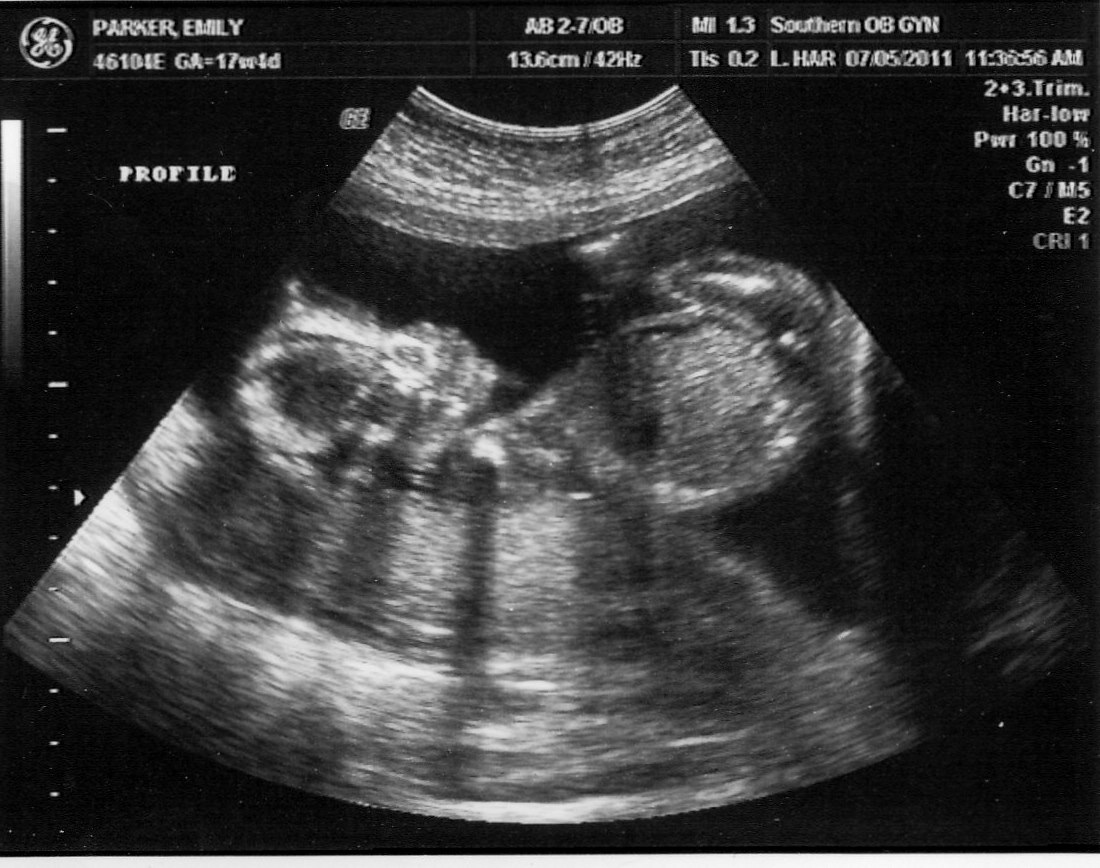 this is my favorite, the least skeleton looking 🙂 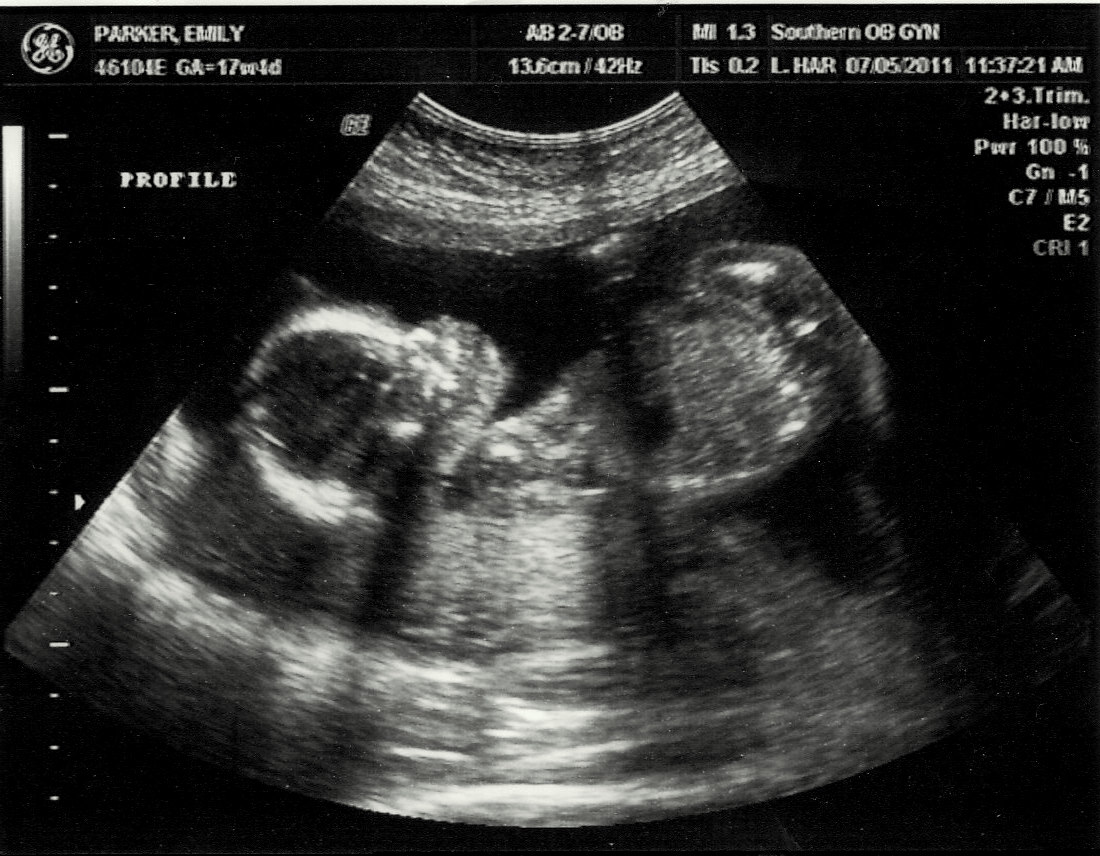 Zach went ahead and left with Kye to head home right after the ultrasound and I went to meet with Stacy. Only a couple more visits with her before she leaves to have her baby 🙁 We went over every picture of the ultrasound and she reassured me that Blitzen is totally healthy. I saw all the chambers of the heart, both kidneys, umbilical cord, etc. She could tell how worried I was and I told her that even if I know the EXACT minute I conceive my next child that I will NOT be telling them b/c I simply can’t wait this long for an ultrasound again. Sure, hearing the heartbeat is nice at each appointment…but it’s just not the same as SEEING your baby and KNOWING they are healthy!!!

She told me the reason I felt like I was having twins (due to all the crazy, strong movement) is due to the location of my placenta. It’s towards the front or something and that means I feel the movement better than if it was towards the back. I guess with Kye it must have been towards the back because I had a hard time feeling him move! (Ok…it’s the exact opposite! My placenta this time is posterior which means it’s towards the back and that’s why I can feel it more! Glad Stacy’s a blog reader so she could help me out on that one haha). She also said I’ve gained a total of 6 lb…at home I’m still at -1. I think that FULL bladder skewed my weight, for sure.

My only real question was about the probiotics and she said it wouldn’t probably  help the baby much since it would give the benefits to me, but that it would probably be beneficial (at least on some level) to do while nursing if I want to. She also answered my intimacy question, and what I was wondering about is totally fine to do! We also decided that Zach and I need to come up with our birth plan by the next appointment so we can start going over it since I’ll only see her 2-3 more times.

This was the appointment where I had to decide if I wanted the testing for down syndrome and other things…and again I opted out. I was VERY tempted to do it. However, usually if it comes back positive then it’s a false positive and it’s rare that you’d have a perfectly healthy ultrasound then have any of those health issues. Why cause myself any extra worry? Especially if I were to get a false positive??? Zach and I know, without a doubt, that no matter what this is OUR baby and a baby God created so even if something is wrong, we’d be having this baby regardless!

I had to get some blood work done to test for iron or something and I freak about that kind of thing. I always have a nurse distract me and while we were talking it hit me…my cat PEED in the NURSERY! haha. I guess my needing to pee myself and my concern for Blitzen trumped the whole cat-locked-in-a-room-for-5-days thing. Luckiily, Zeke has a better bladder than I do and Zach said he didn’t poop at all and the pee was easy to get out (I couldn’t clean it b/c you can’t touch that junk when pregnant!)

I’m so thankful that everything looks good so far for Blitzen and I plan to go into the next ultrasound (which I think will be the 4d one!) EXCITED instead of worried! Again, I’m sorry for those of you that I worried…I really appreciate all your concerns and I’m sorry I didn’t have a chance to at least update facebook until now. Last night I was crazy busy unpacking then repacking for our trip today (we were in St Augustine yesterday and today we’re in Atlanta!) so it’s been a little nuts to say the least 🙂

I thought it’d be cute to get a first picture of Kye with his little brother or sister…it didn’t go as planned as Kye was NOT in the mood! 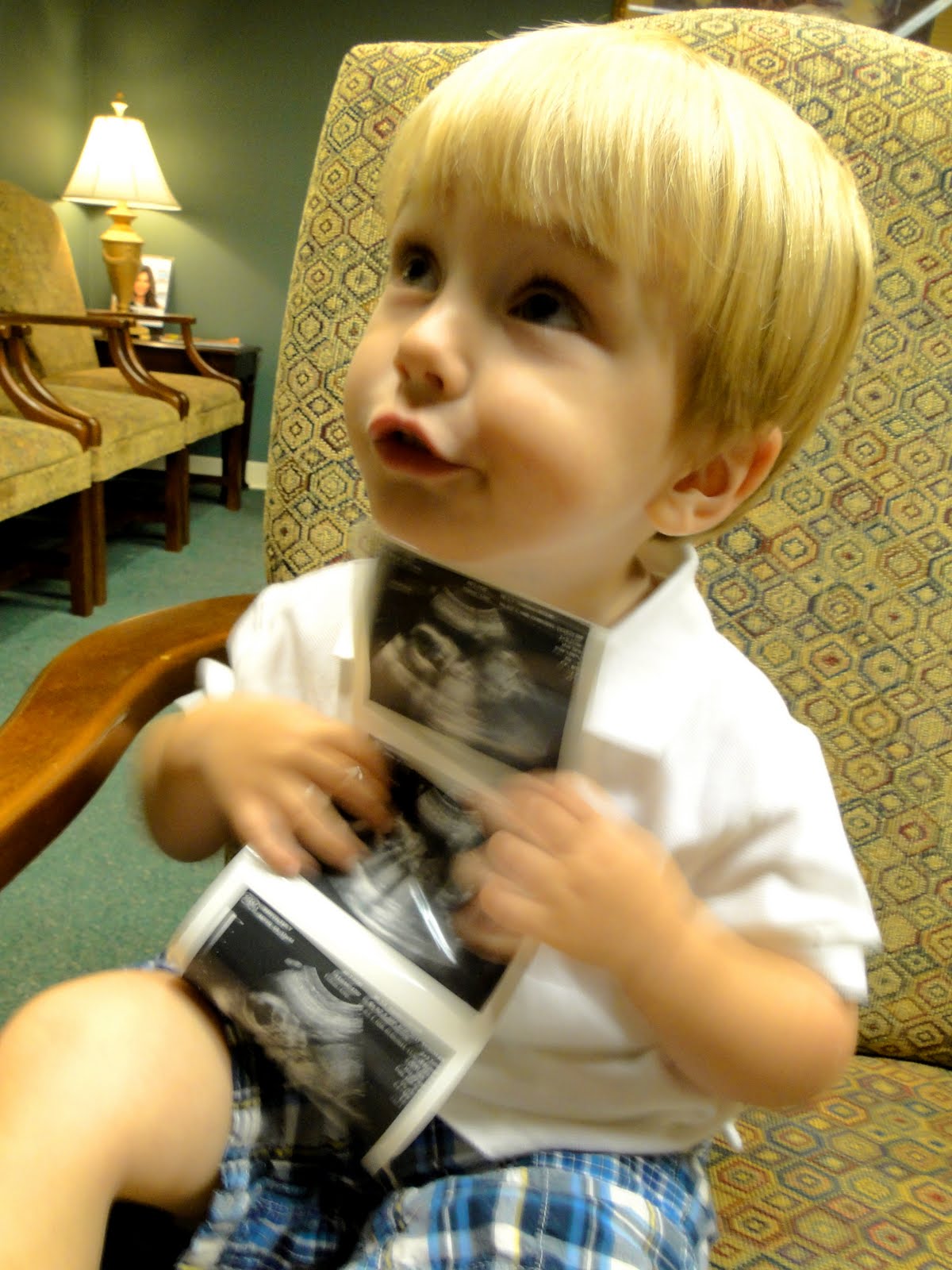 I tried again at home, and another fail! 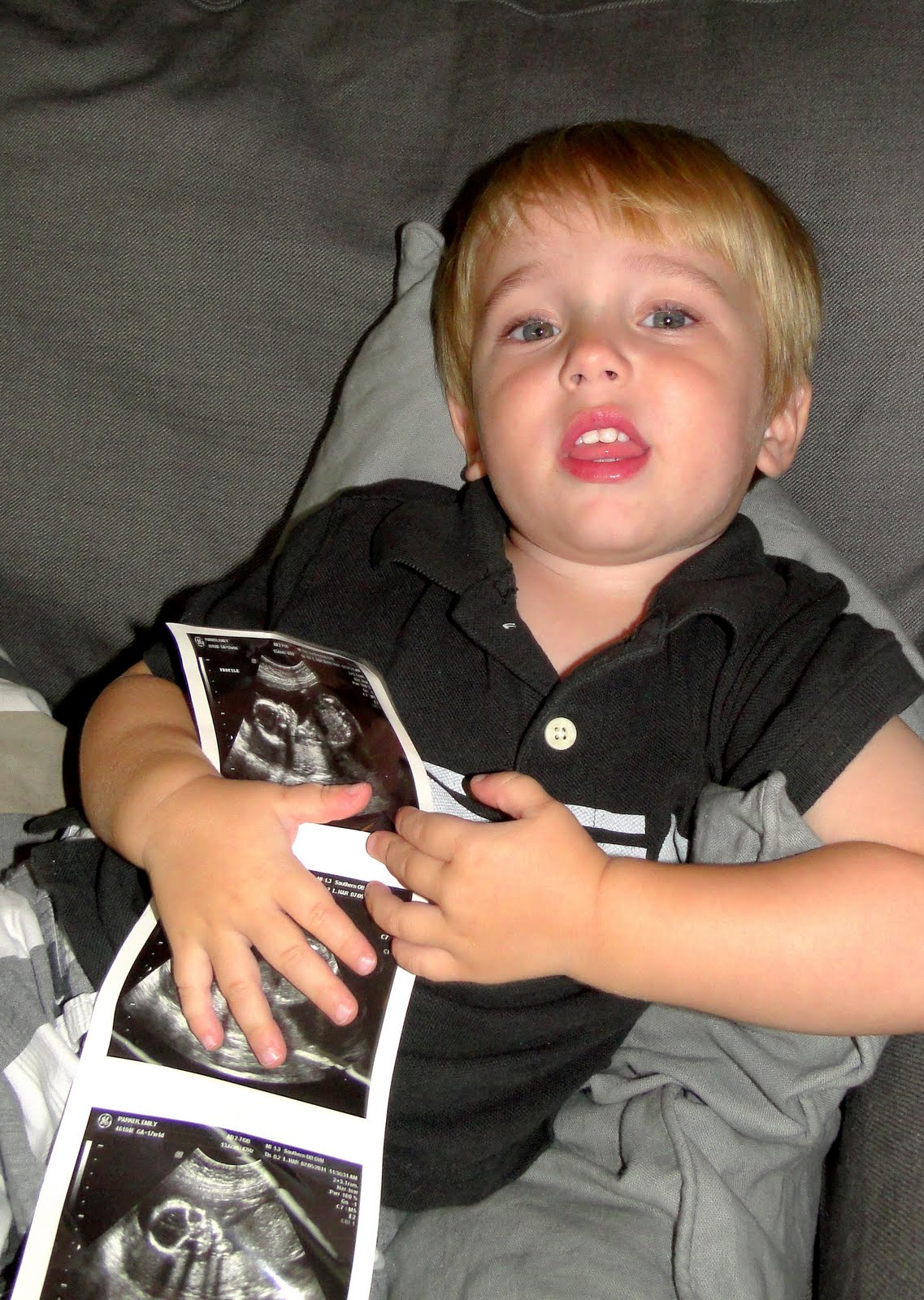 I said “show Mommy the baby” and this is what I get! 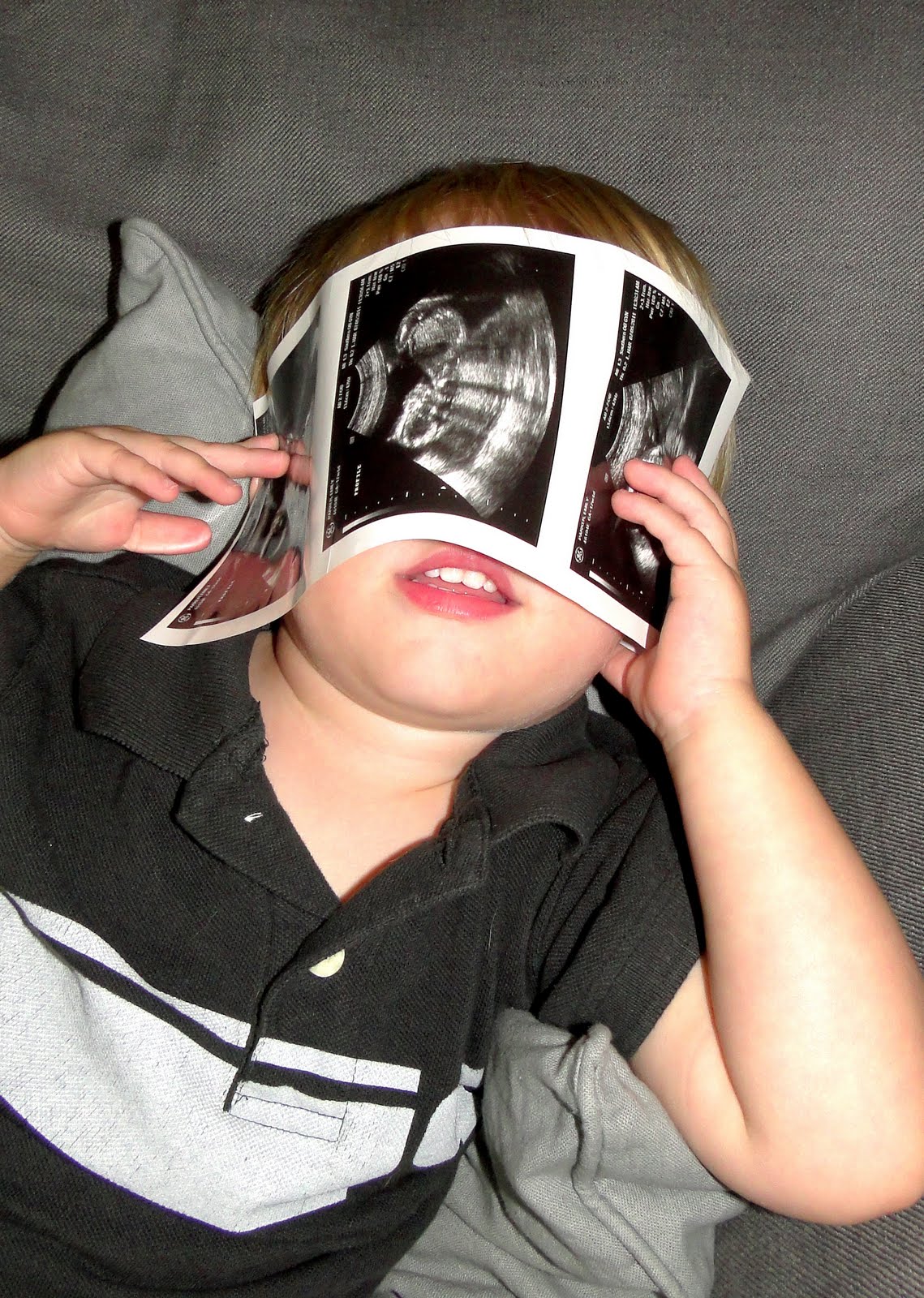 it’s okay Blitzen we all still love you 🙂 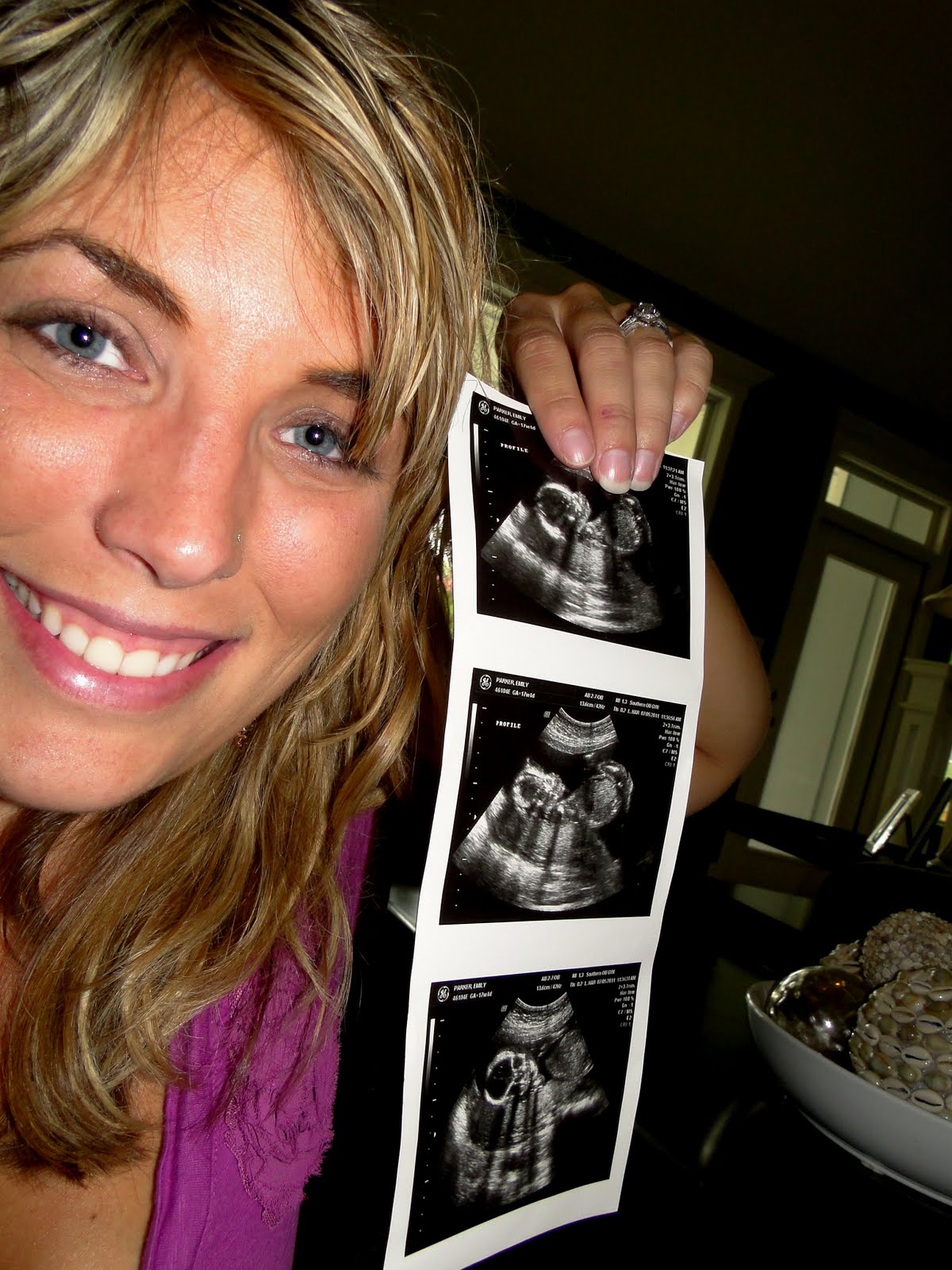