I have been putting off blogging about Zach’s back for two reasons: 1) we STILL don’t have closure from the guy’s insurance who is at fault for the back issues and 2) I kept holding out hope to be able to have a positive blog post after he was pain free.

But here I am…

In May 2014 (yes, two years ago) Zach was sitting at a stop light in town, completely at a stop. A huge truck ran into the back of his car without even breaking (turns out driver was on drugs). Zach went to the emergency room and they told him he’d be needing an MRI on his back (his car was also totaled). This wasn’t Zach’s first rodeo with back issues. He had back surgery in 2010 but was COMPLETELY pain free and it’s been so disheartening for him to have to have back pain all over again (but in a different area of his back this time due to the wreck).

Following the wreck we’ve spent a LOT of money hoping to solve the back issues. An mri revealed a bulging disc. This has really affected Zach’s quality of life.  His prior injury was more painful while standing but this one is worse while sitting. Which is TERRIBLE when you drive a lot and sit in businesses selling insurance for a living. His “me time” is also sports related. He loves to golf and play basketball and hasn’t been able to do either in a very long time. So he hurts while working and then can’t even get some relaxation time because he can’t play any sports! He can’t get down and wrestle with the kids which breaks his heart.  I’m having to do a lot more of the heavy lifting around here which also really bothers Zach as he takes pride in taking care of our family. It’s been tough on him but he’s tried to push through with a smile on his face and has tried to manage the pain the best he can (physical therapy, mega ibprophen, chiropractor, ice, heating pad, cushion when sitting, back brace, etc). He was told he’ll need an epidural every 3 months for life. Pretty disheartening when you’re 31 years old to hear that kind of diagnosis!

Over the past few weeks the pain has gotten worse and worse and over this last weekend it became unbearable. The most walking he’s able to do is from the bed to the bathroom. He needs help to make it to the car and has to be driven to dr. appointments (where they have a wheelchair waiting for him). He said if the pain he felt those months leading up to his 2010 back surgery was a 10 on the pain scale then this is a solid 12. My husband is one of those “manly men” so seeing him in this kind of pain (and scared the way he is) is so, so hard for me emotionally. It’s also hard because he’s self employed. Don’t work…don’t get paid. On top of the pain he’s feeling he’s also SO stressed and worried about how he’s going to provide for his family.

His dr has been AMAZING. He was able to get us in to see him and ordered an emergency MRI for Zach. We went yesterday (Wednesday) and reviewed the MRI results with him. As he predicted, Zach needs surgery. His disc (same one injured in the wreck) has ruptured. Zach and his dr feel confident that the surgery will be a success and will result in his ability to walk again and hopefully be pain free. The downside? Other than the fact that his last back surgery cost us over $10,000 out of pocket and that we’re already over $15,000 in the hole from this dang wreck issues (that the person at fault’s insurance still hasn’t paid…) and we’ll be out the income from the 2 ½- 3 weeks Zach will be missing in work they also couldn’t get Zach on the schedule until WEDNESDAY. That’s an entire WEEK from his appointment yesterday. An entire WEEK of agonizing pain.

I needed a GOOD cry yesterday but really didn’t have time for it 😉 I’ve made up a spreadsheet for him so we can keep track of his medicine. I honestly wanted them to admit him in the hospital. He dehydrates very easily which scares me and all these hardcore pain meds he’s on (valium, percocet, as well as a steroid) make me SO nervous. It’s pretty impossible for me to provide him with the care he really needs, especially while still caring for 3 kids. Basically right now I feel like a MEGA crappy wife and an even crappier mom. I’m pretty sure Zach is feeling pretty much the same way I am. He can’t interact much with the kids and is confined to our bed or our recliner (which is located about an inch or two from our bed) or our bathtub.

All the worry and stress aside…it’s so awesome to see how God prepares us for rougher times in life. My foot issues were SO random but have really been beneficial to me in my ability right now to feel empathy for Zach. While my pain was nothing compared to his, I can empathize with feeling helpless and frustrated and worried. While his surgery recovery should be easier than mine was I do know how to help him heal because I know the things that helped me. Plus it makes me EXTRA thankful that God lead me to physical therapy b/c my lack of foot pain now helps me better able to care for Zach and our family during this time!

I also see how God has prepared our marriage for this rocky time. We have been working SO HARD on our marriage bond and I think God put that on our hearts as a priority because He knows the future and He knew the hardships we’d soon be facing. Zach 2010 back issues were THE hardest time on our marriage (aside from the back issues we were living with my mom and building our house so it was a lot at once). While in some ways life is easier now (no moving or family members living with us) we do have 3 kids instead of just 1 which adds a good bit of stress to the mix (if Tess wasn’t cutting her dang 2 year molars it’d be a lot better for sure ha!)! Of course as his back has gotten worse I’ve feared for our marriage. I never ever want to go back to that phase of our lives and I have been nervous that his back issues will mean marriage issues too. But God has helped us grow and I know that HE will keep us united and strong and that we will weather this storm together!

While there is never a “good time” to need surgery, I’m thankful it didn’t happen when we had some major trips planned or anything. We’re moving Mother’s Day and I will just go and do with the kids the next couple weeks as much as possible so Zach can rest peacefully at home 🙂 Once I find my silver linings I am better able to function. I was pretty overwhelmed with fear and anxiety yesterday but today I feel like I am getting the hang of all this solo parent/nurse stuff and I’m sure in the next couple of days we’ll have a solid routine in place and the next couple of weeks will fly on by!

Please keep Zach in your prayers. I wish more than anything that he could have surgery today so he can be released from this constant pain. I pray that he is able to find comfort and the ability to sleep (even those hardcore pain meds aren’t helping much…he was hurting so badly he couldn’t get the MRI and had to come back after taking a double dose of pain meds) during these next several days. I pray that the surgery is smooth and successful. I’m so nervous about him being so young and having a second back surgery. I pray that following the surgery he gets the proper post-procedure care. That he makes the necessary life adjustments to protect his back and prevent further issues from happening (of course you can’t be prepared for a guy to rear end you…). I pray that the insurance company works it all out with us so this won’t hurt our family financially and that this back issue becomes a distant memory soon. Kye asks constantly when he can go play golf again with Daddy and it breaks our hearts that he’s running to help his dad walk down the hallway when he’s only 7 years old. I pray Zach will be back to his active self soon and that he is able to stay POSITIVE through this tough time.

Smiling through the pain 🙂 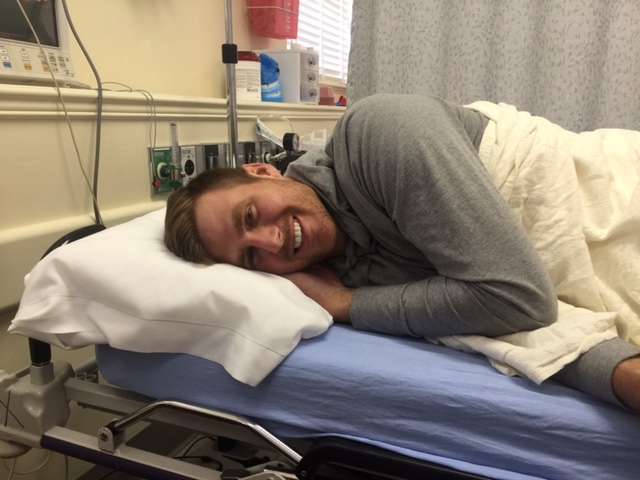