For the past year or so I’ve been blessed beyond measure to be part of an AWESOME women’s bible study on Wednesday night at my church (locals…come visit with us at Central Avenue Church of Christ Wednesday nights at 7 – we’d love to have you!). Mrs. Myra gave an amazing lesson one Wednesday night about a modern spin on the Proverbs 31 Woman.

If you’re like me, then reading Proverbs 31 totally makes you feel like a complete failure of a woman. I mean that chick makes us all look bad, am I right? Hearing Mrs. Myra’s lesson completely changed my view of Proverbs 31. It brought a new light to this woman and to the characteristics I DO share with her. It really stuck with me so I asked Mrs. Myra to please share it with all of you! I hope this lesson brings as much joy to your lives as it has to mine and gives us all a fresh look at this woman we all share qualities with 🙂

Mrs. Myra is actually teaching our class now each week and we’re going over material the SHE wrote about women of the bible. It is SO awesome and is something I hope some of you can be part of with us! 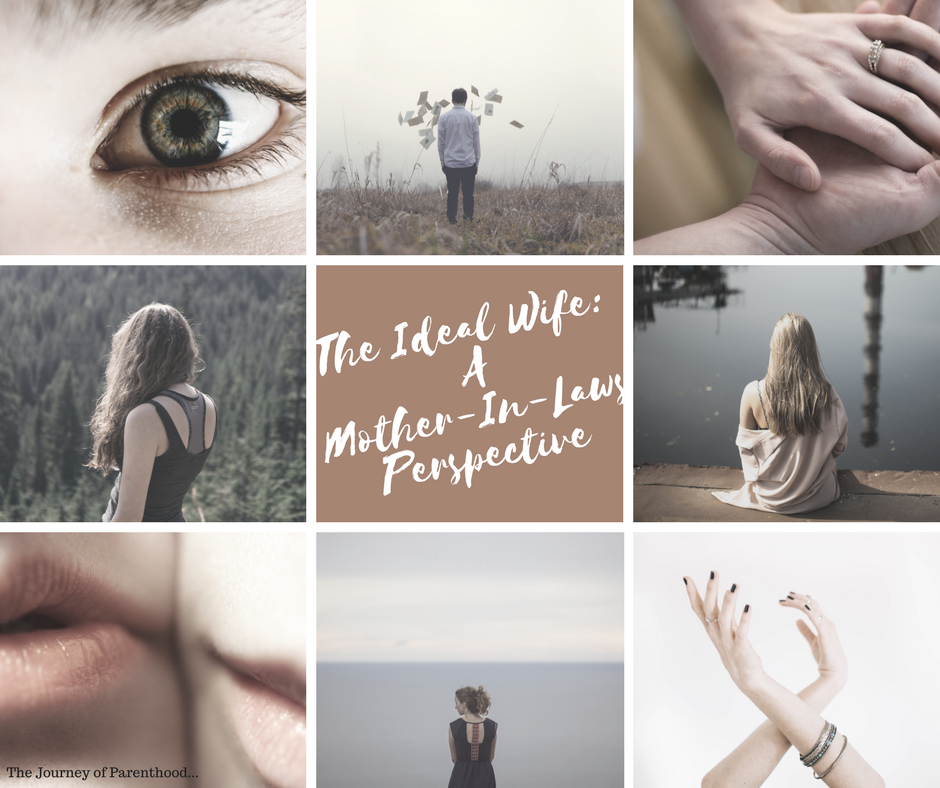 The Ideal Wife – from a
Mother-in-Law’s Perspective

Proverbs 31 is a passage that many women have resented
because it’s often presented as a guaranteed guilt trip for women.  However, it wasn’t originally presented to
women at all!  The mother of young king
Lemuel, identified as Solomon by many scholars, taught him the qualities he
should be seeking in a wife.  We have no
evidence that Solomon ever followed the advice, but it was good advice just the
same!   If Lemuel was really Solomon,
then Bathsheba was the human author of this description, which improves our
estimation of her considerably.

Proverbs 31:10-31 describes an ideal wife in terms of the
culture of ancient Israel; but we can generalize the ideas to describe similar
behavior applicable to our own culture.
The passage is so relevant to an understanding of a wife’s role as
manager of her household that we will consider it verse by verse.  The passage describes the characteristic
qualities of a “strong woman.”
10 An excellent wife, who can find? For her worth is far above
jewels.  The word translated
“excellent” in the New American Standard version or
“virtuous” in the King James Version, is the same word that is
translated “strength” in verse 3 of the same chapter.  “Her worth” refers to the price a man
would pay for his bride.

She seeks out and enjoys profitable work.  13 She looks for wool and flax, and works
with her hands in delight.  She
doesn’t limit her thinking to local opportunities. 14 She is like merchant
ships; she brings her food from afar.
She runs her life and manages her household in an organized way.  15 She rises also while it is still night,
and gives food to her household, and portions to her maidens.  She understands investments and makes them
wisely.  16 She considers a field and
buys it; from her earnings she plants a vineyard.  She is confident of her own abilities.  17 She girds herself with strength, and
makes her arms strong. 18a She senses that her gain is good. 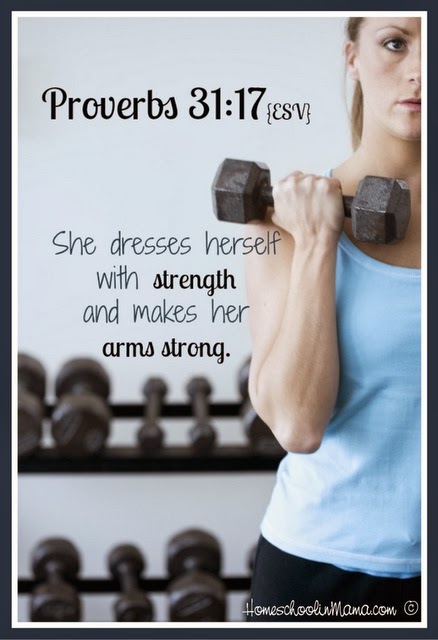 In today’s terms, she plans well, and her household runs
smoothly.  In Old Testament terms, her
lamp doesn’t run out of oil and go out during the night, which would have been
a serious problem in a house with no electricity and no matches! 18b her
lamp does not go out at night.  She
develops marketable skills; she doesn’t disdain to do menial tasks.  19 She stretches out her hands to the
distaff, and her hands grasp the spindle.

She manages her family’s resources well.  She generously shares with the less
fortunate.  20 She extends her hand to
the poor; and she stretches out her hands to the needy.  She plans

ahead so that her family’s
needs are met during predictable changes.
21 She is not afraid of the snow for her household, for all her
household are clothed with scarlet.
She doesn’t neglect herself and her own needs.  22 She makes coverings for herself; her
clothing is fine linen and purple. 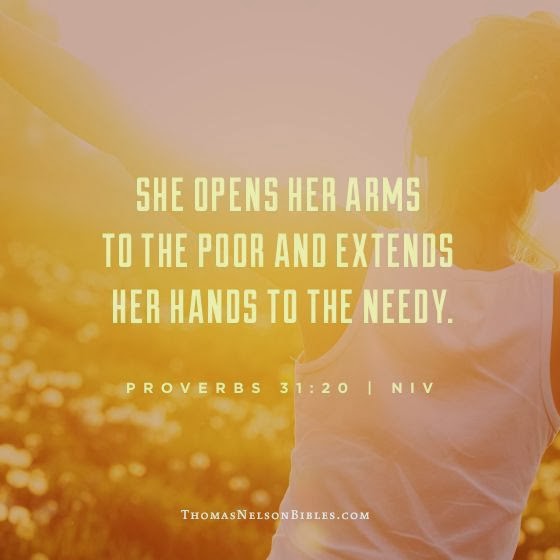 She and her family have a good reputation in the
community.  Her husband is respected for
his good judgment.  After all, he was
smart enough to marry her!  23 Her
husband is known in the gates, when he sits among the elders of the land.  Her work is recognized for its high
quality.  24 She makes linen garments
and sells them, and supplies belts to the tradesmen.  People think of her as strong and
dignified.  25a Strength and dignity
are her clothing.  How does she
establish that sort of reputation?  She
acts strong and dignified, even when she doesn’t feel that way, and she
respects the dignity of others.

She is secure.
25b and she smiles at the future.
Will she have troubles?  Yes, of
course; and she knows that she will.  She
also knows that God will provide the strength she will need to overcome or to
live through whatever happens.   She is
socially secure, because she knows what to say and how to say it.  26 She opens her mouth in wisdom, and the
teaching of kindness is on her tongue.
Her family is secure, because she manages well and works hard.  27 She looks well to the ways of her
household, and does not eat the bread of idleness. 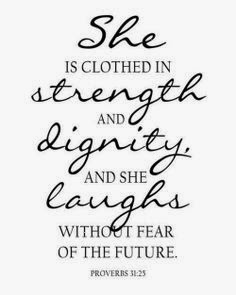 The strong woman gets wonderful rewards.  Her family loves her.  28 Her children rise up and bless her; her
husband also, and he praises her, saying: 29 “Many daughters have done
nobly, but you excel them all.”
People continue to respect her after her youthful beauty is gone.  30 Charm is deceitful and beauty is vain,
but a woman who fears the LORD, she shall be praised.  She has a sense of personal
accomplishment.  31 Give her the
product of her hands, and let her works praise her in the gates. 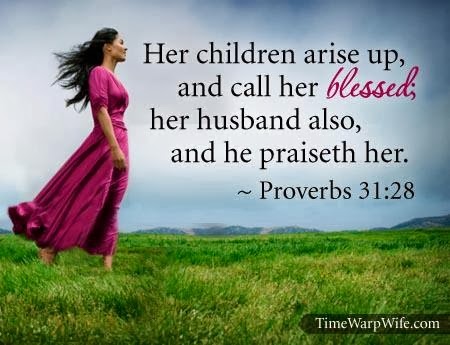 The basis of the strong woman’s strength, the foundation
of the way she manages her life, the central fact of her character is that she
“fears the Lord.”  The meaning
of fear in this

context means “hold in
reverence.”   Her relationship with
God is her first priority and determines the personal philosophy that causes
her to serve her family so well.

Note:  Quotations from the Bible are from the New
American Standard version and are in italics to set them apart from the
explanatory text.


Wouldn’t we ALL want our sons to marry a woman like the Proverbs 31 woman? And isn’t she someone we all aspire to be? I don’t know about you but after Mrs. Myra’s lesson I felt so much hope about myself and my abilities to BE that woman. I felt inspired and able to see her in a totally new way.  And as a mama I totally do see how another mother would describe her hopes for a daughter-in-law in such a way. I pray that I am that daughter-in-law for my husbands mama and that my son (and future potential sons someday) do marry women like her as well and that my daughter (and future potential daughters someday too) will also be such women for their husbands!