It was SUCH a blessing to have ZERO concerns about Kye or Britt this year. I felt super comfortable with Kye’s school this year and am thankful we went through all that transition last year so we could get it out of the way and be settled this one. I LOVE the preschool where our kids attend so I wasn’t really overly nervous about Tess going to school, I was just more anxious about my little tiny baby who just turned 2 8 days prior being in a classroom setting.

Out of our three kids Tess is the “roughest.” Which makes sense being that she has two older siblings. Kye and Britt have gotten really into rough housing the past 6 months or so. I tell them I don’t care as long as they know WHEN they get hurt (bc c’mon it’ll be a WHEN) that they can’t come crying to me about it haha. While it’s been fine, it has made TESS want to wrestle more. It’s also transitioned into a hitting situation with Tess. She’ll walk up and just BAM hit someone. She says sorry after (and it’s adorable so of course we instantly forgive her) but it’s getting her to STOP hitting that’s the issue.

All that to say, I was pretty confident that Tess would be our first “trouble maker” in a school setting. She’s so sweet and adorable and straight spoiled at home that surely she’d be the one to act out and get clips pulled in class. But nope! She’s shocked me and they’ve YET to send home anything about her hitting anyone! Maybe she just saves it for her siblings haha. I really wish I could be a fly on the wall in both girls’ classrooms. Kye I can TELL how he acts at school. But Britt and Tess? No. Clue.

At Open House we visited Britt’s class first as we thought it’d help ease Tess into the idea. When we walked into Tess’s class she SHOCKED ME and ran right over and played! She had no concerns what-so-ever about it!

I have met her teacher (she helped some in Britt’s class last year) but none of our kids have had her. I also met her “helper teacher” over the summer (and talked about it in this post…she was adopted and was part of a BIG “God moment” for me!). She’s new on staff but seems great! While I don’t know either teacher super well, you can just tell with some people that they are great with kids and both of these ladies give off that vibe. It was pretty crazy in Tess’s class but I did want to talk to her teacher about the potty.

Tess, at this point, was on the VERGE of being 100% trusted in panties but she’d still have the occasional accident. I’d say of the occasional accidents she’d have 99% of them were in the car but I still often had her wear a pull up over her panties in public because #lazy and I didn’t want to risk an accident out and about. Since none of the other kids in her class were in underwear at all I didn’t want to cause stress for her teachers. I can’t imagine watching 10 2 year olds for 4 hours…let alone having to remember to take one kid to the potty every 90 min!

We decided I’d send Tess in panties with a pull up over them until they got into a good rhythm with everything. We’re around 9 weeks in now and she just goes in panties at this point. 🙂 The potty was really my main concern and discussion point with her teacher and I felt a lot better after meeting and going over it together! 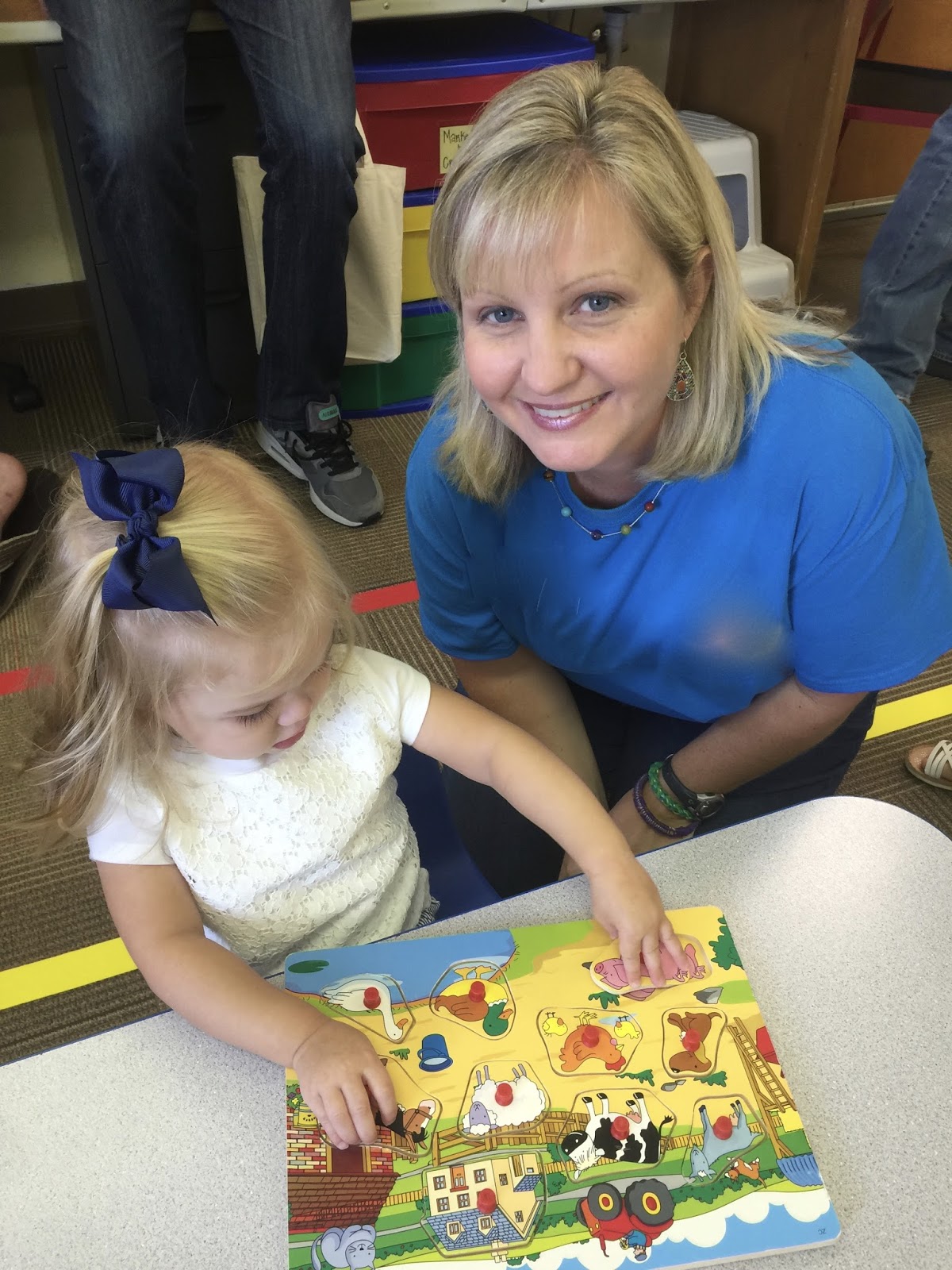 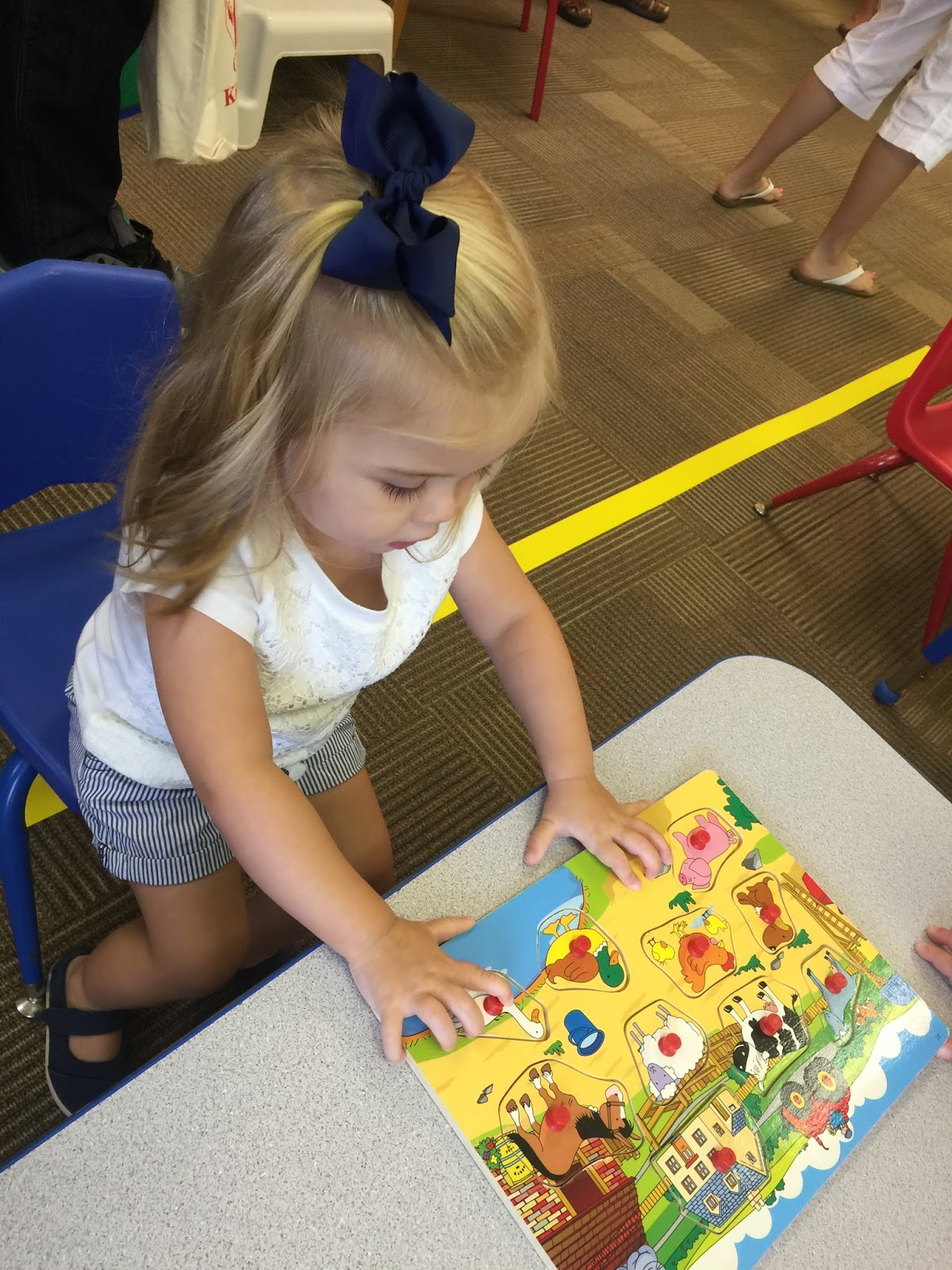 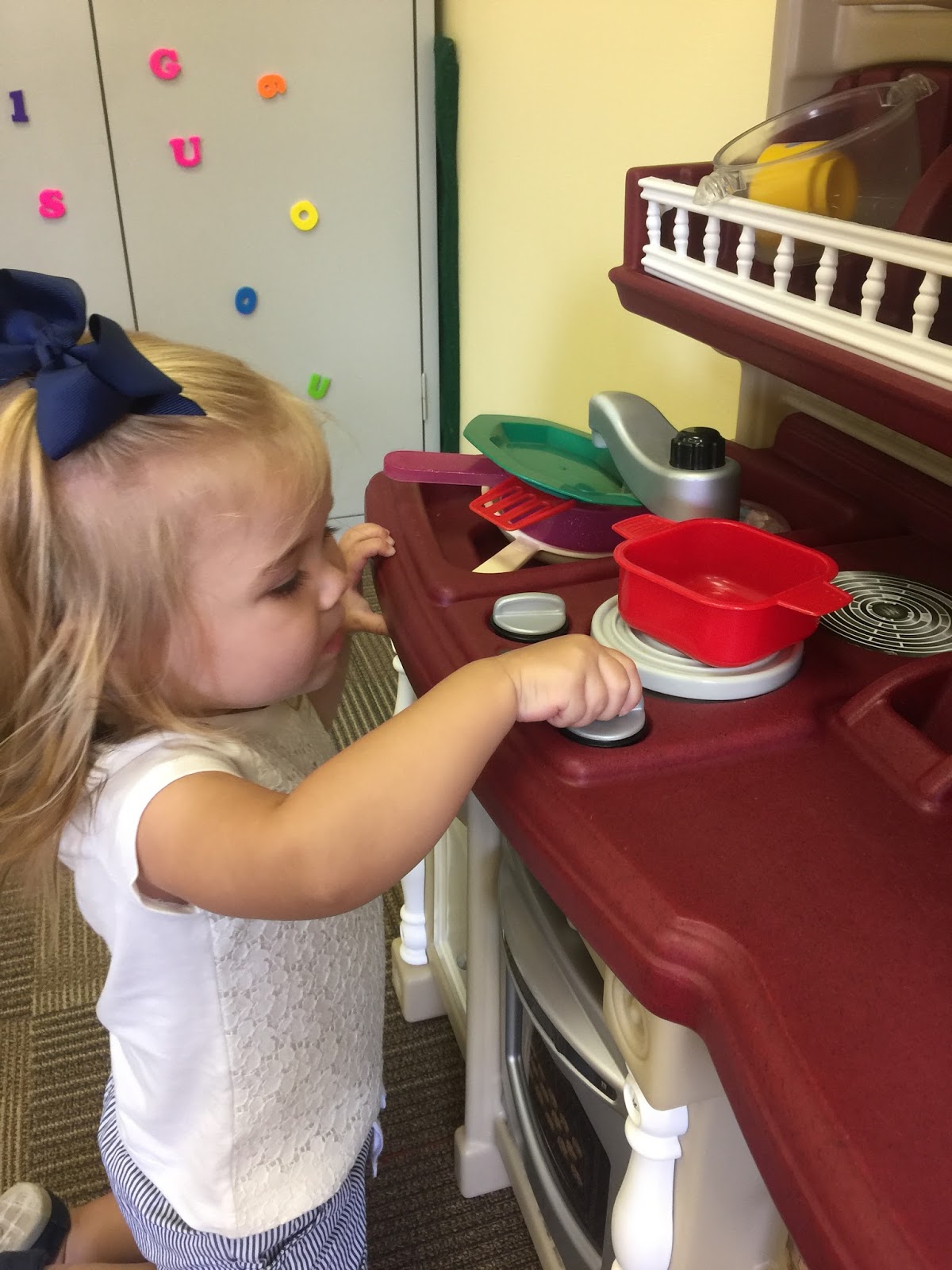 The girls at Open House! Britt and I got Tess’s first day of school outfit from Gymboree outlet at the same time we bought Britt’s dress. I wanted them to coordinate, at least for the first day (although sometimes they do other days as well!). I know technically it’s strawberries on her dress, but let’s pretend they are apples for back to school haha Her shoes are Gap and I’m obsessed with them! We lost one of her gold sandals in CVS (so frustrating) so I bought these thinking they were gold. They ended up being yellow but it’s a soft enough color that they go with a TON of stuff she owns! Wish I had them in my size!!! 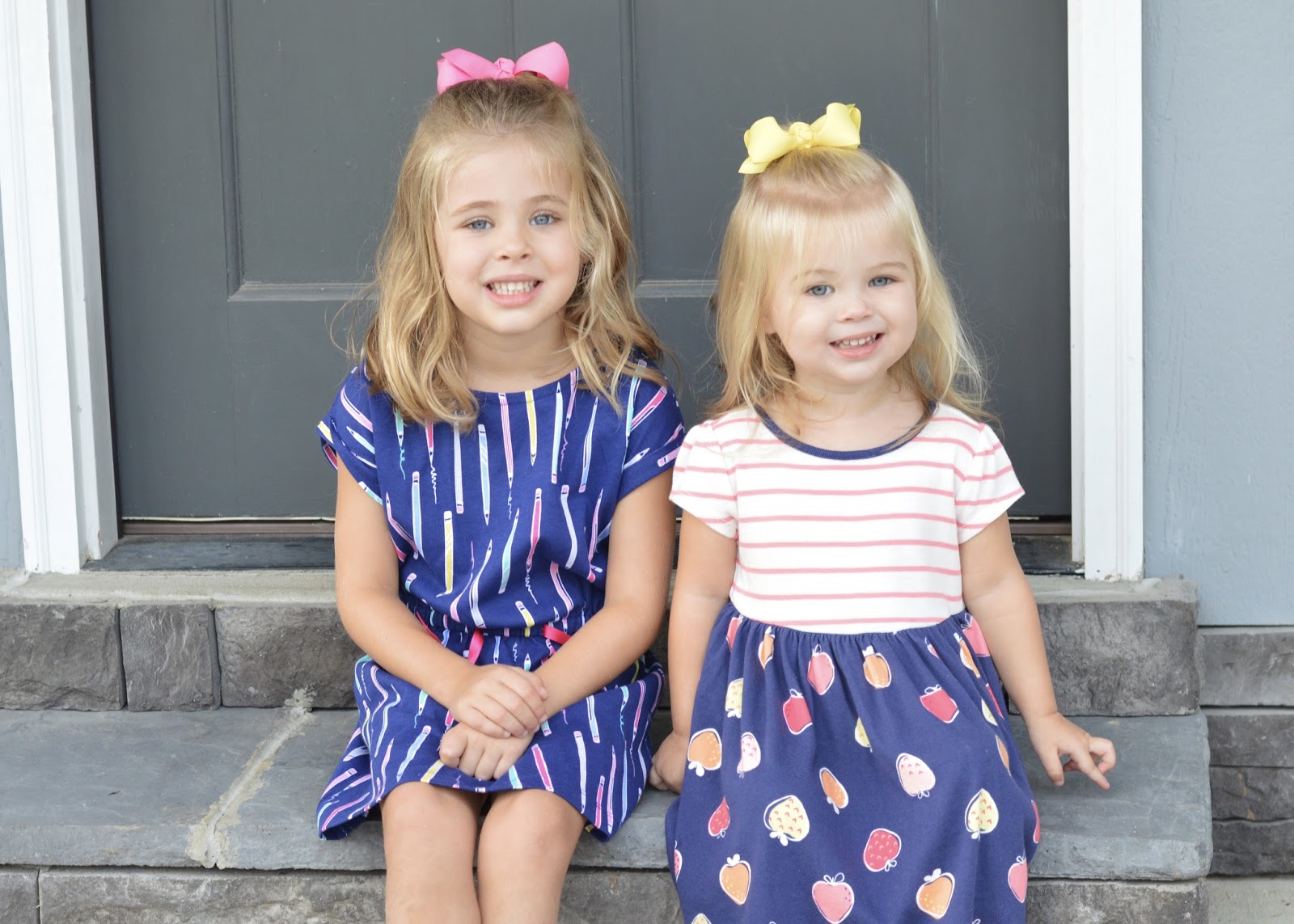 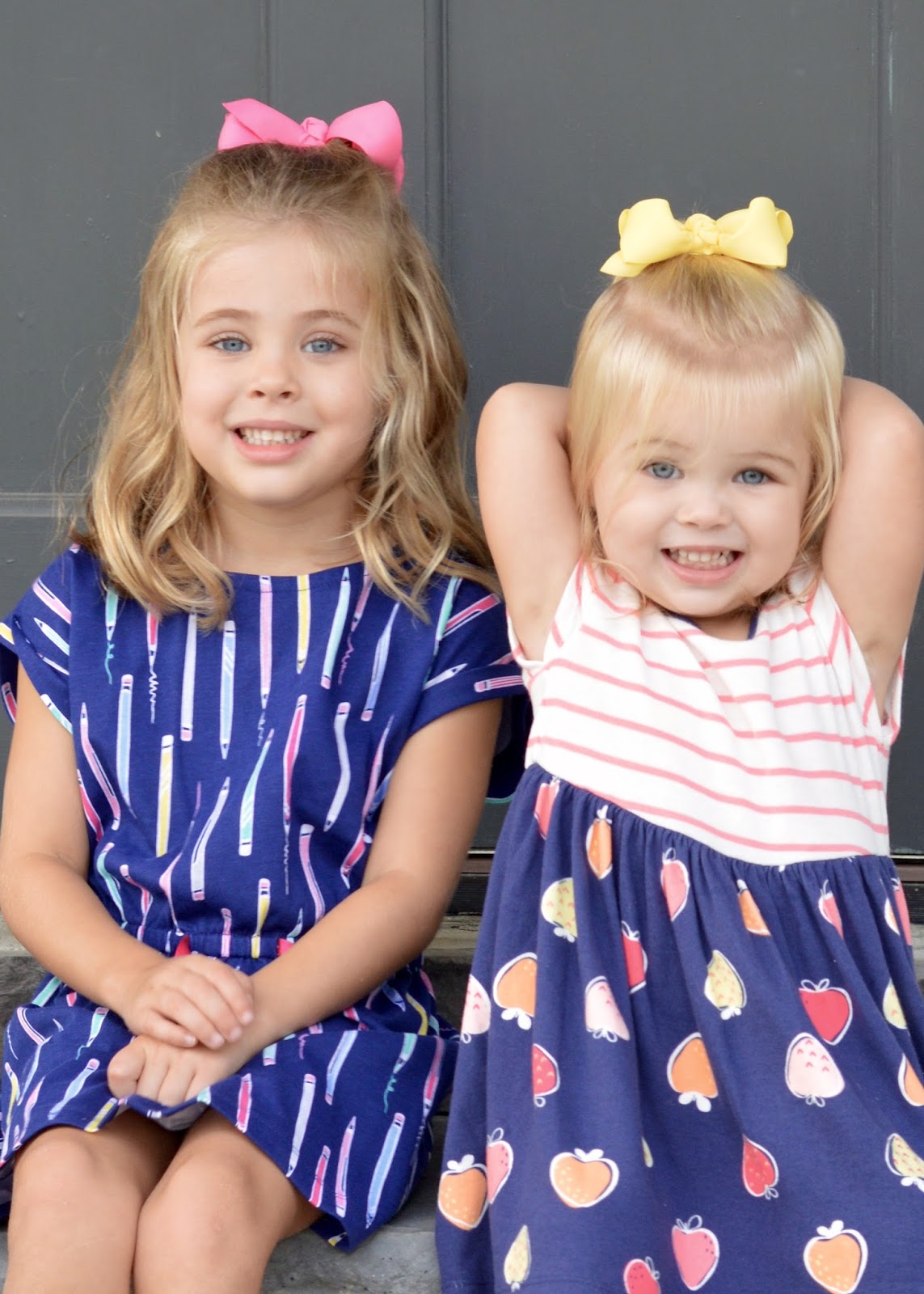 I can’t even handle it! 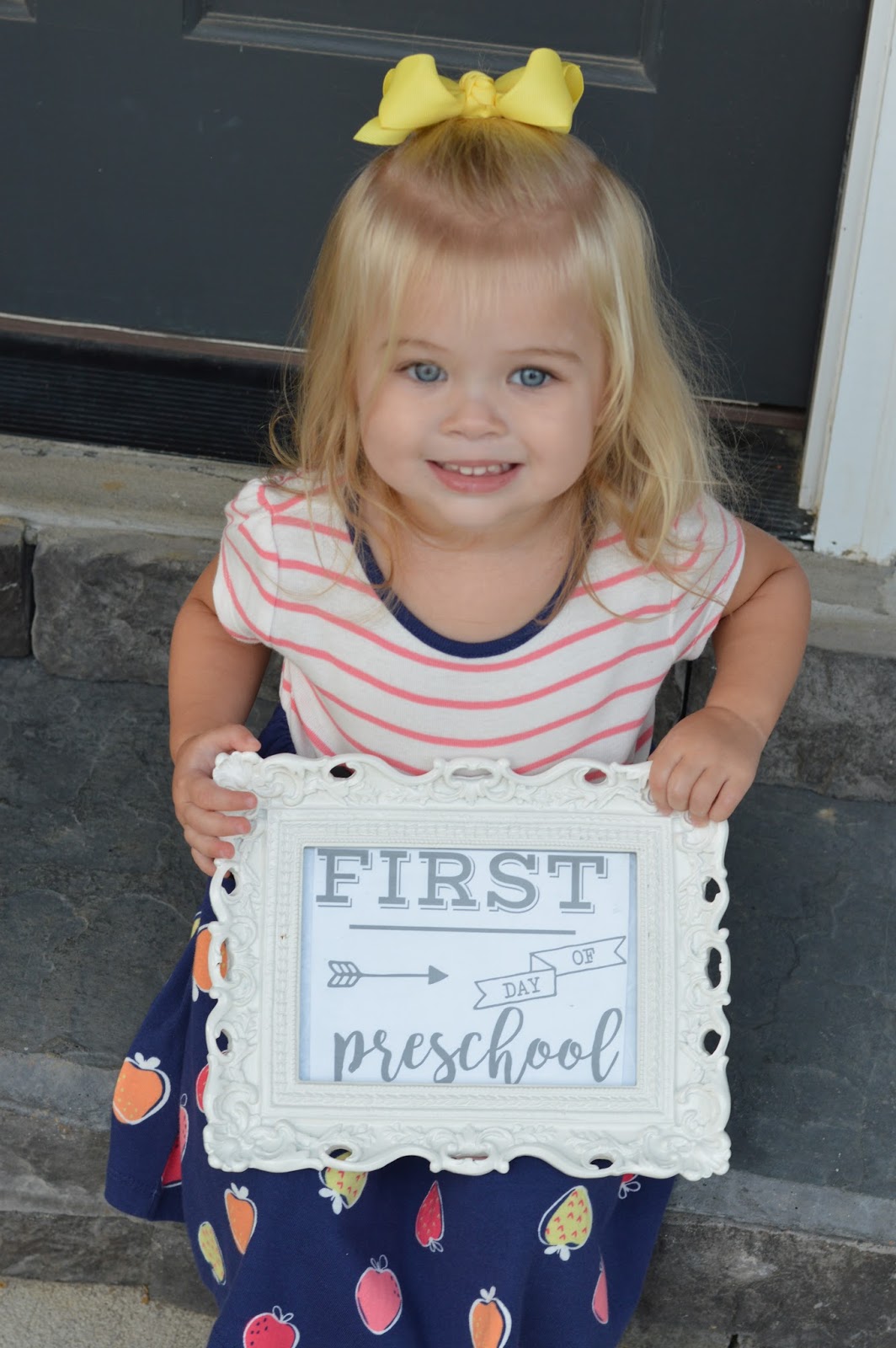 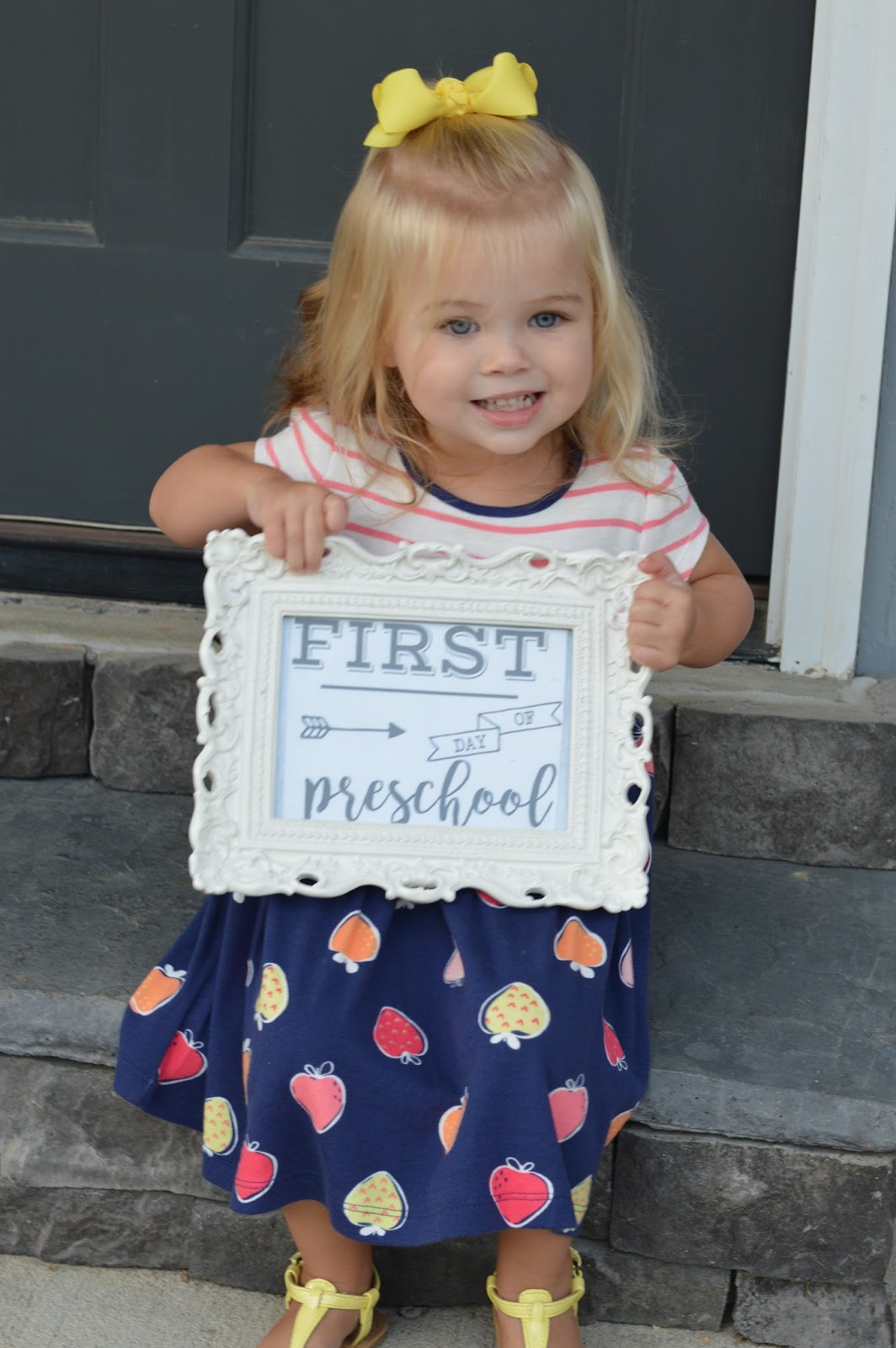 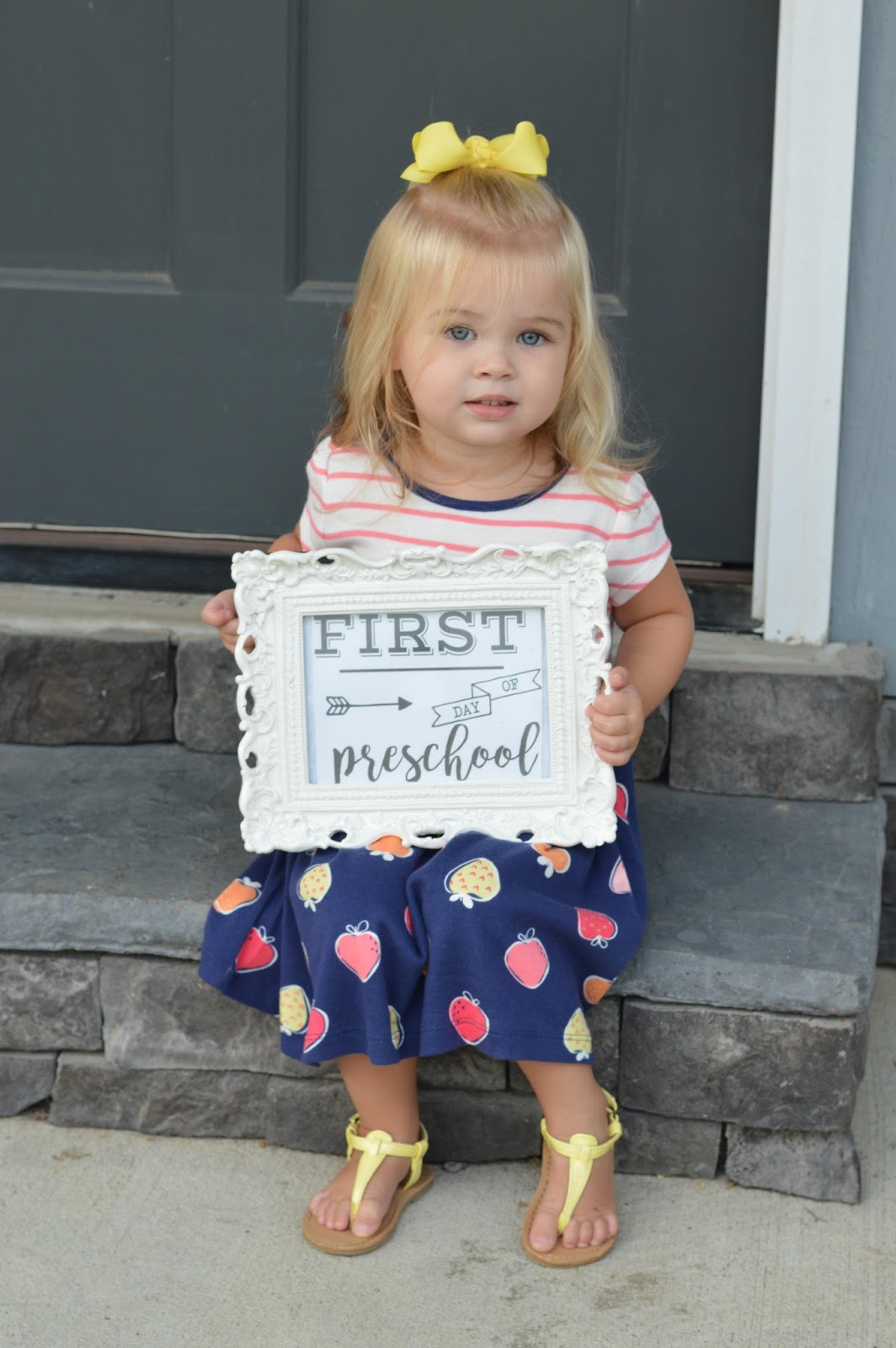 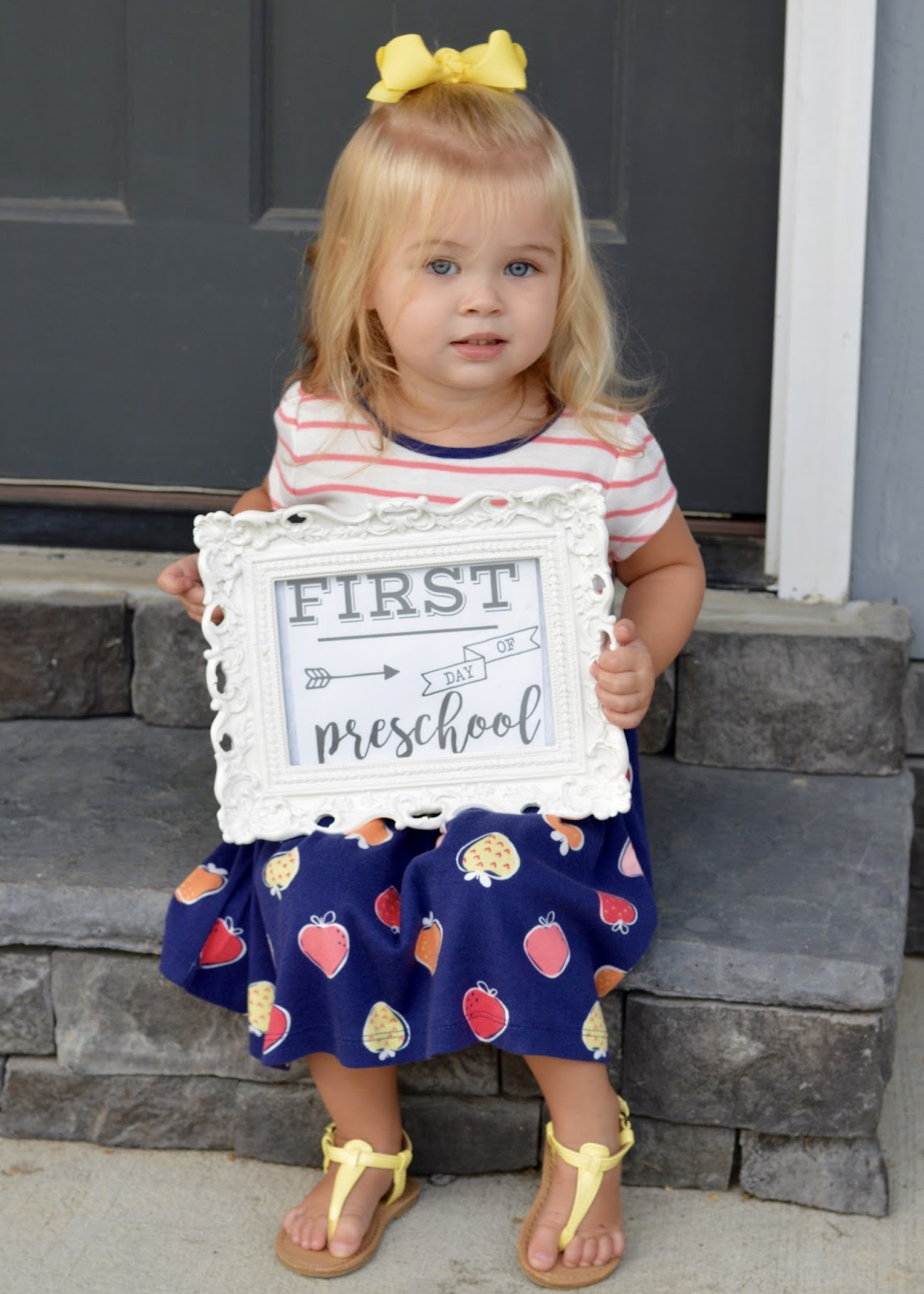 I felt bad for Britt because she got a plain boring tote while the other kids got cool book bags. I bought Tess the cheapest PBK one they had and lucked out and it’s flamingos 🙂 It is the smaller size bag but looks MASSIVE on her!!! She’s so itty bitty!!! 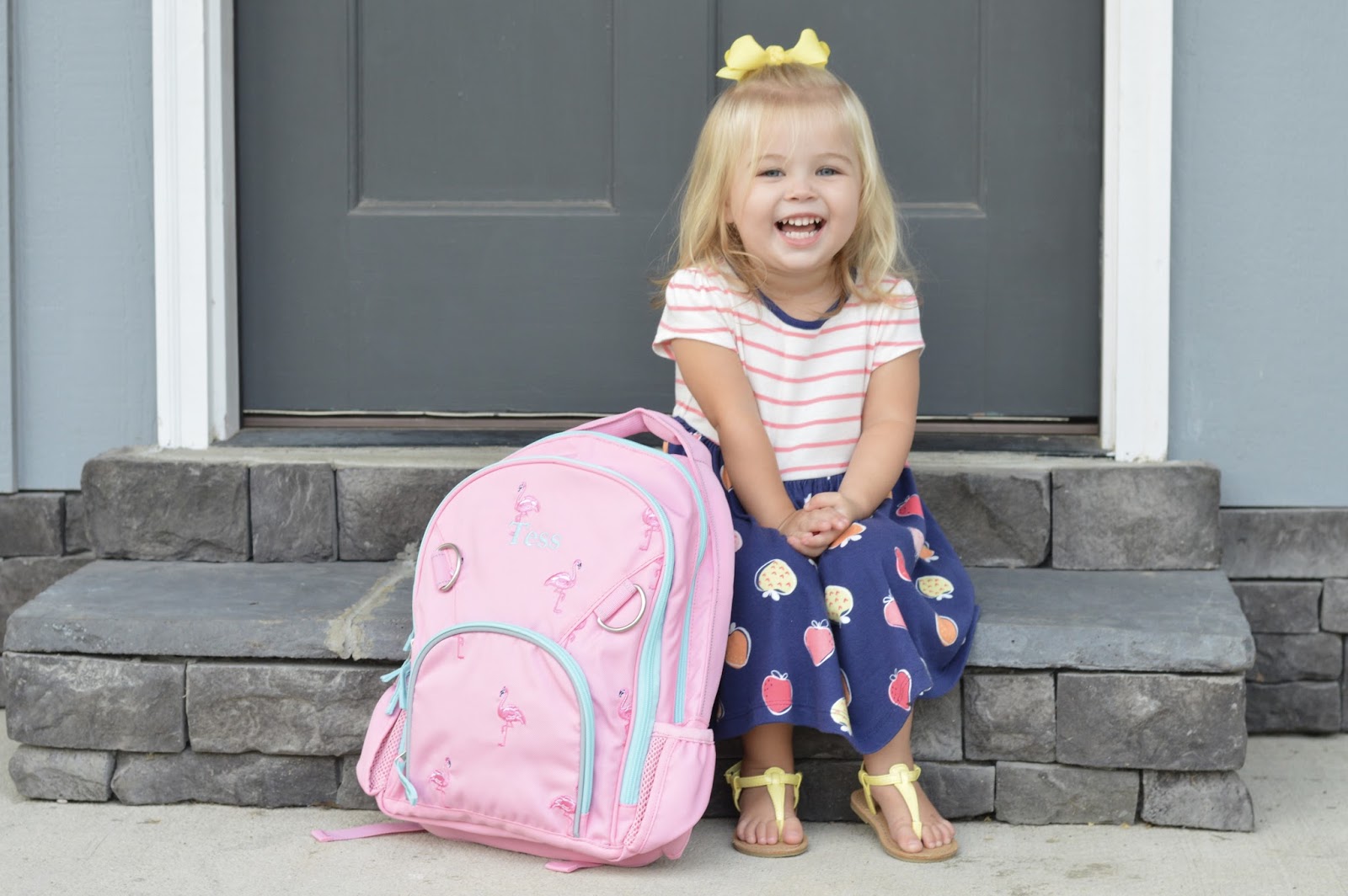 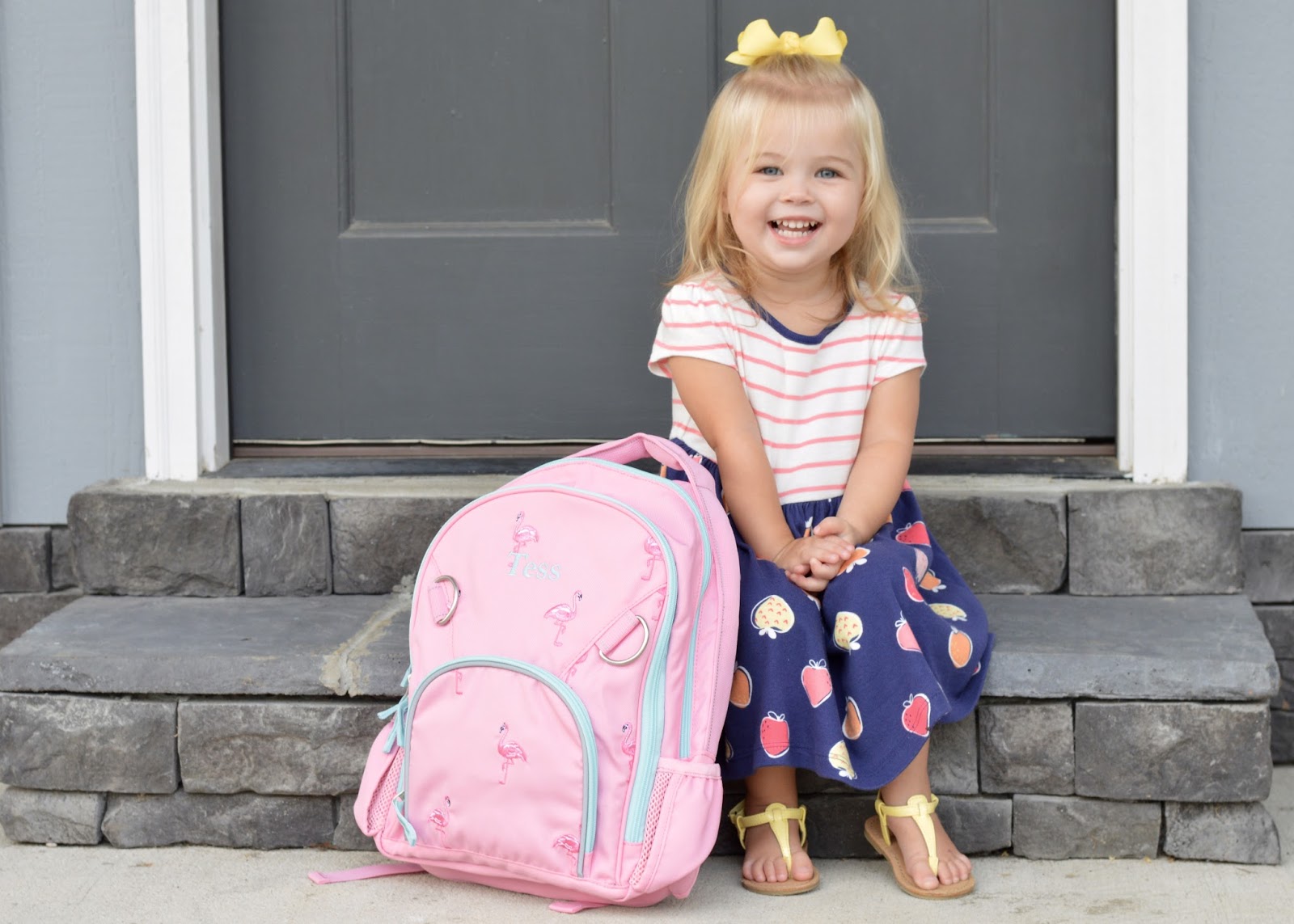 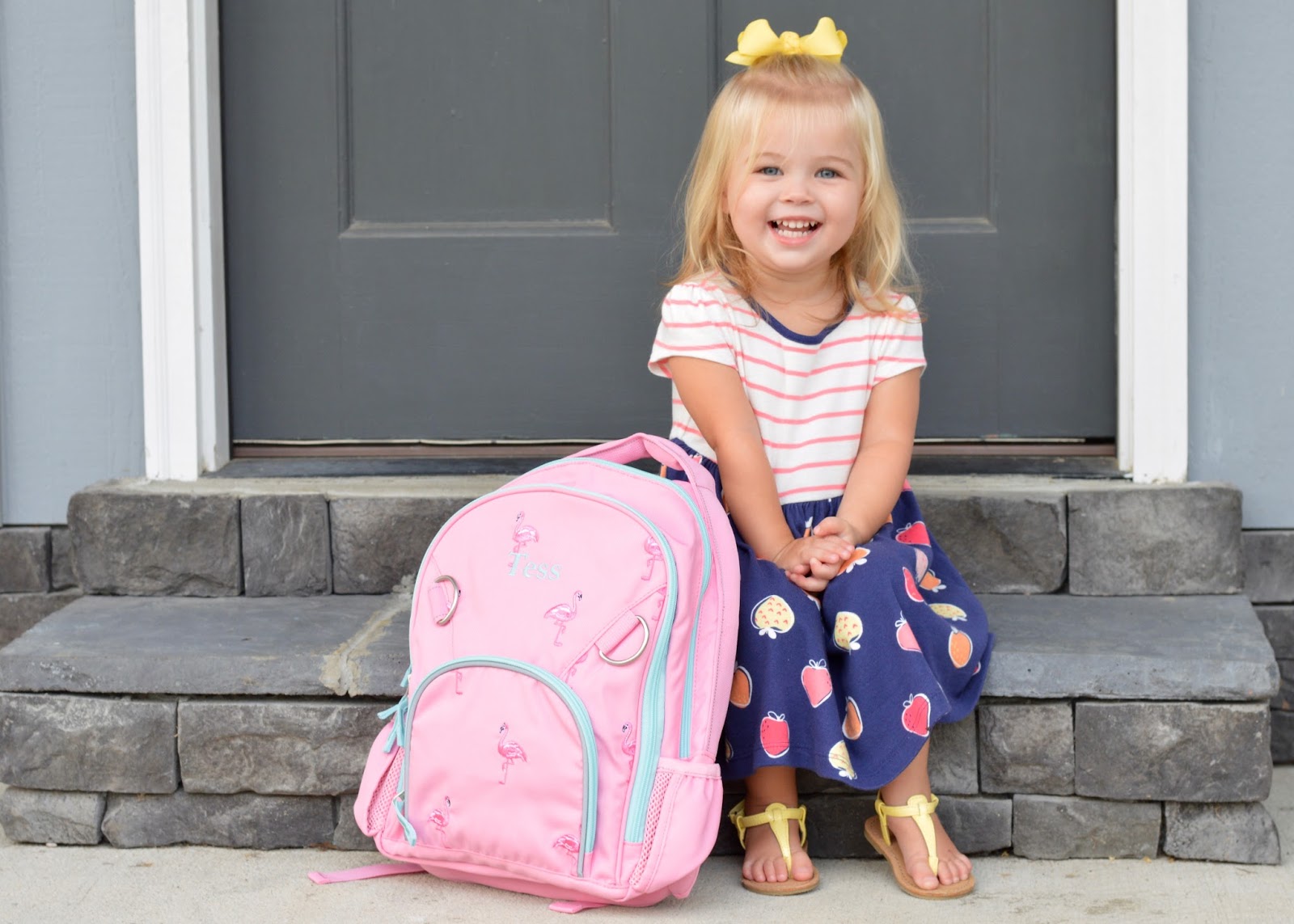 On the first day she literally had no clue what was happening. She was super pumped to carry her book bag and to walk with Britt to school and we just tried to talk up the whole big girl thing 😉 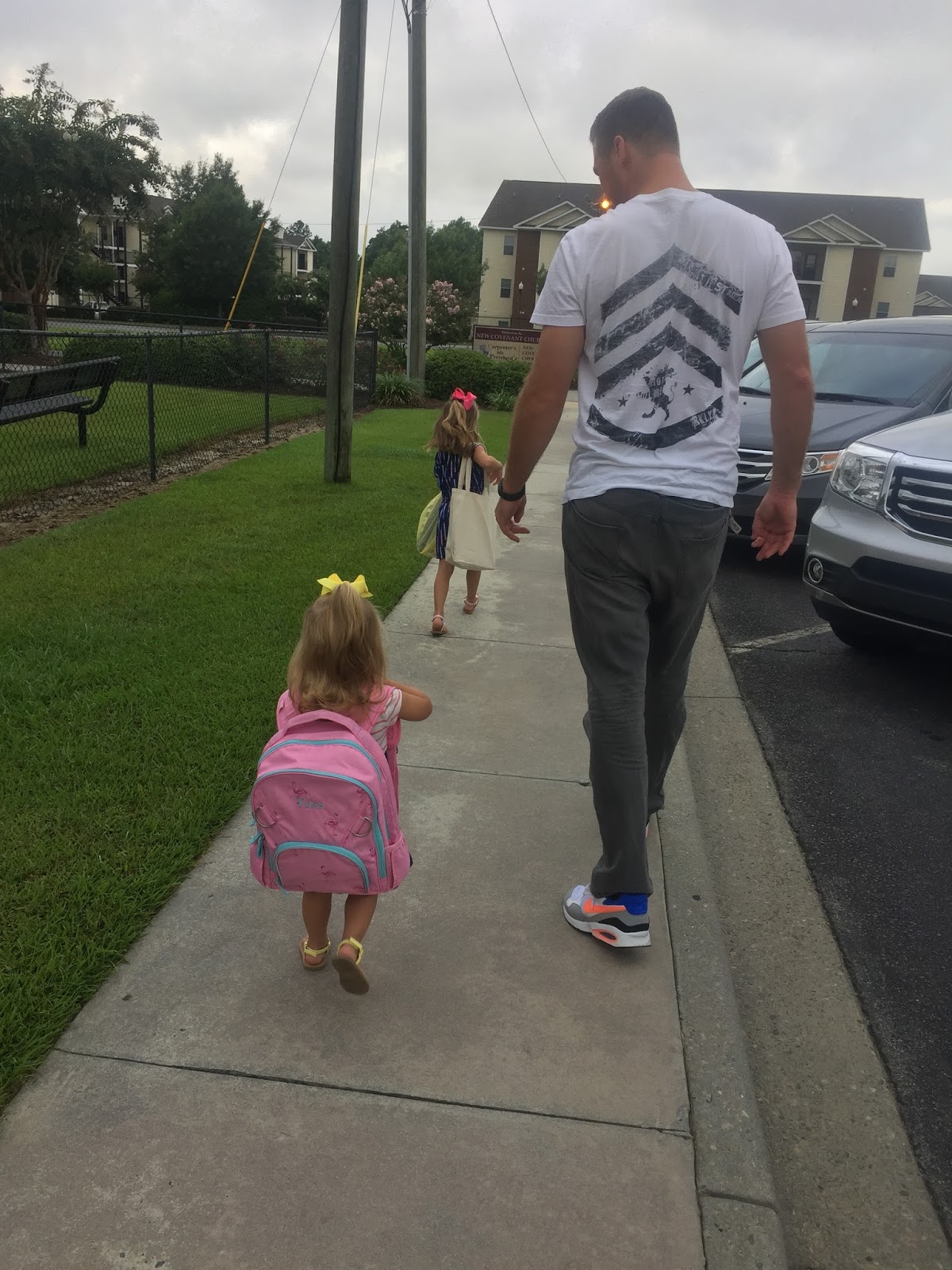 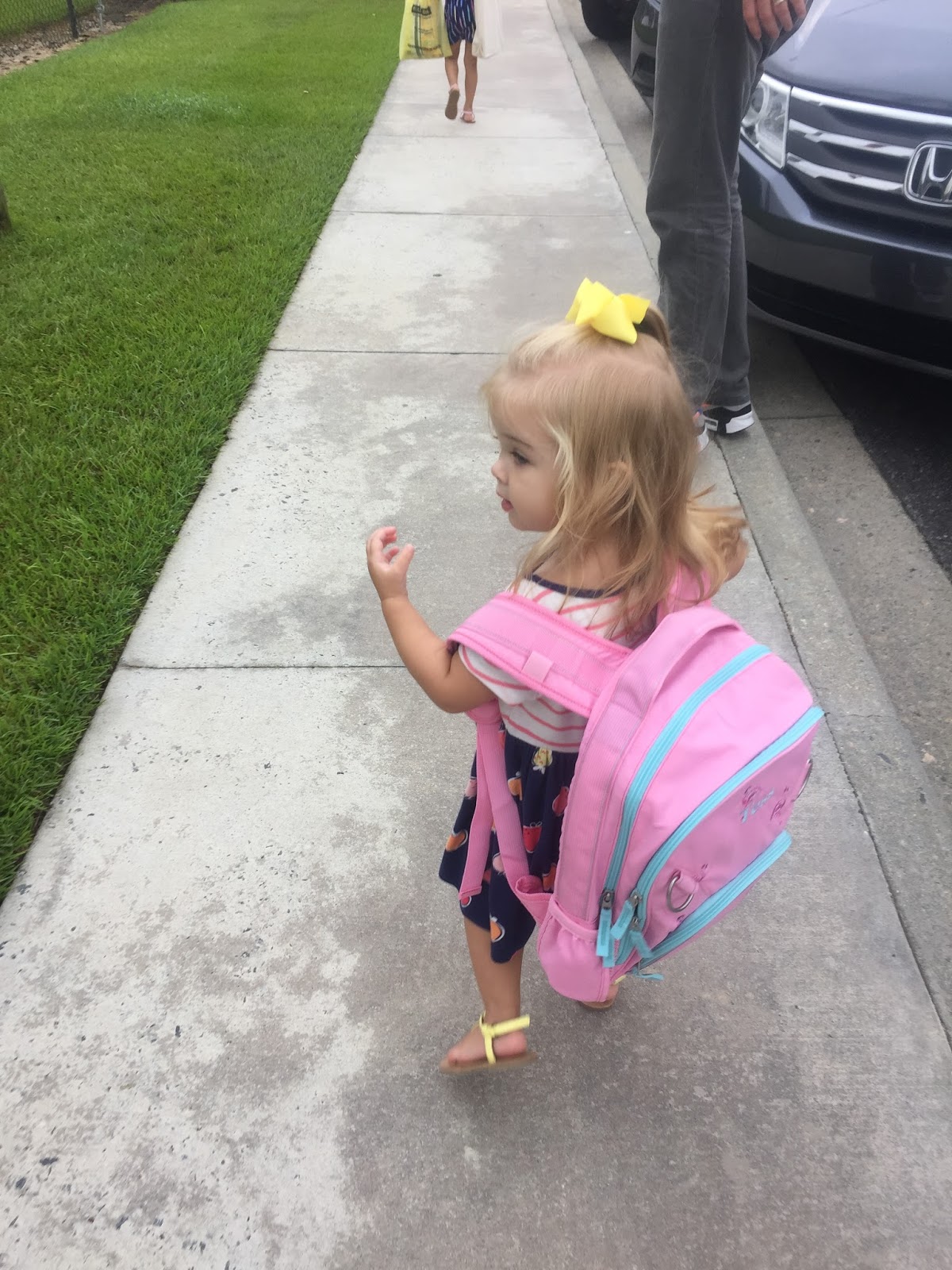 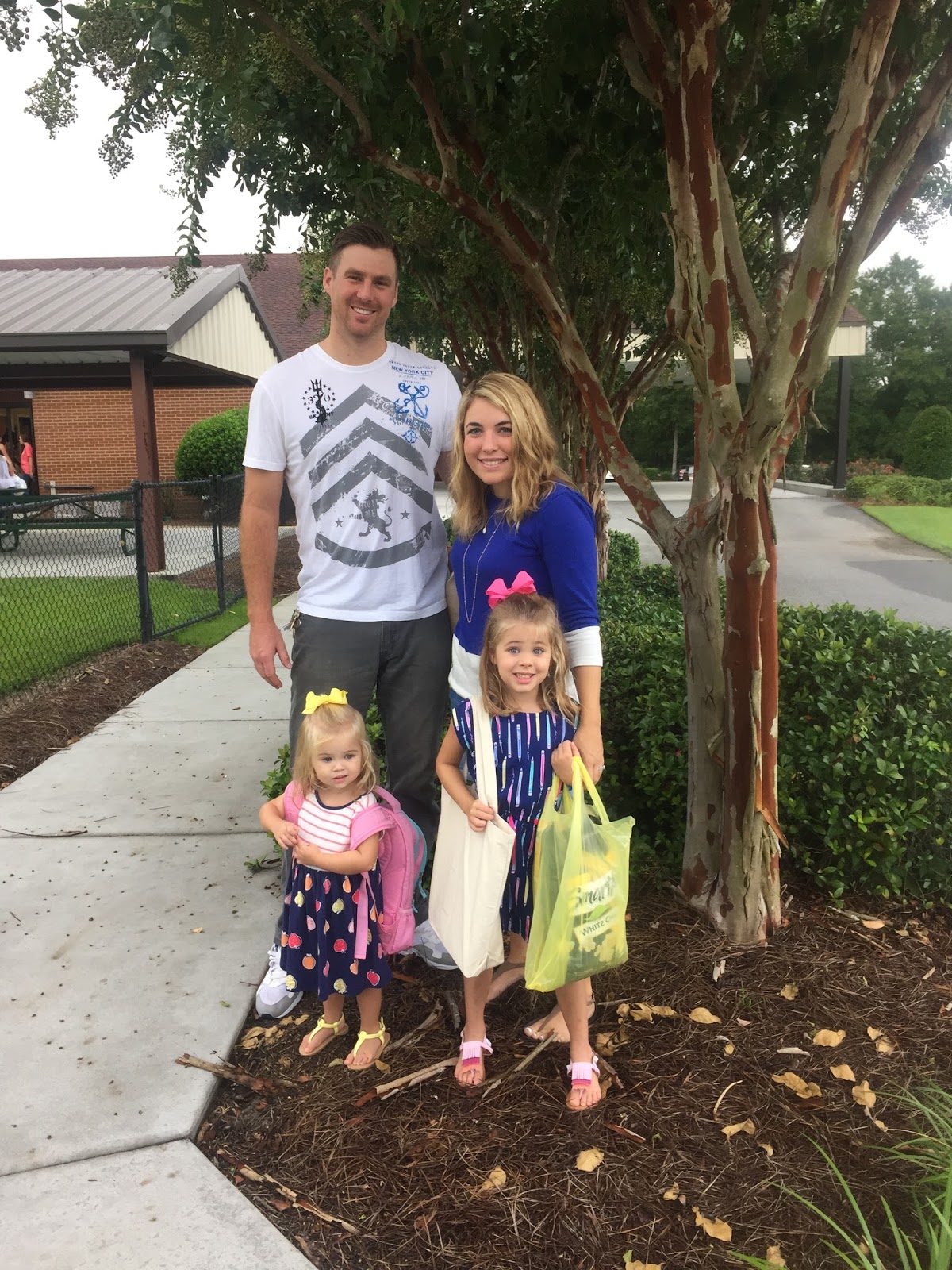 We dropped Britt off first. Again, hoping it’d help Tess ease into things. She was SO ADORABLE walking the halls y’all. She wanted to walk on her own but insisted on carrying the book bag and she was struggling not to fall over. I took two videos (one and two). So stinking cute.

Ugh it makes me wanna cry! I feel like she was JUST a one week old when we brought her to school for her first outing to take Kye and Britt on their first days. Now she’s going there too!!! Ahhhhh. 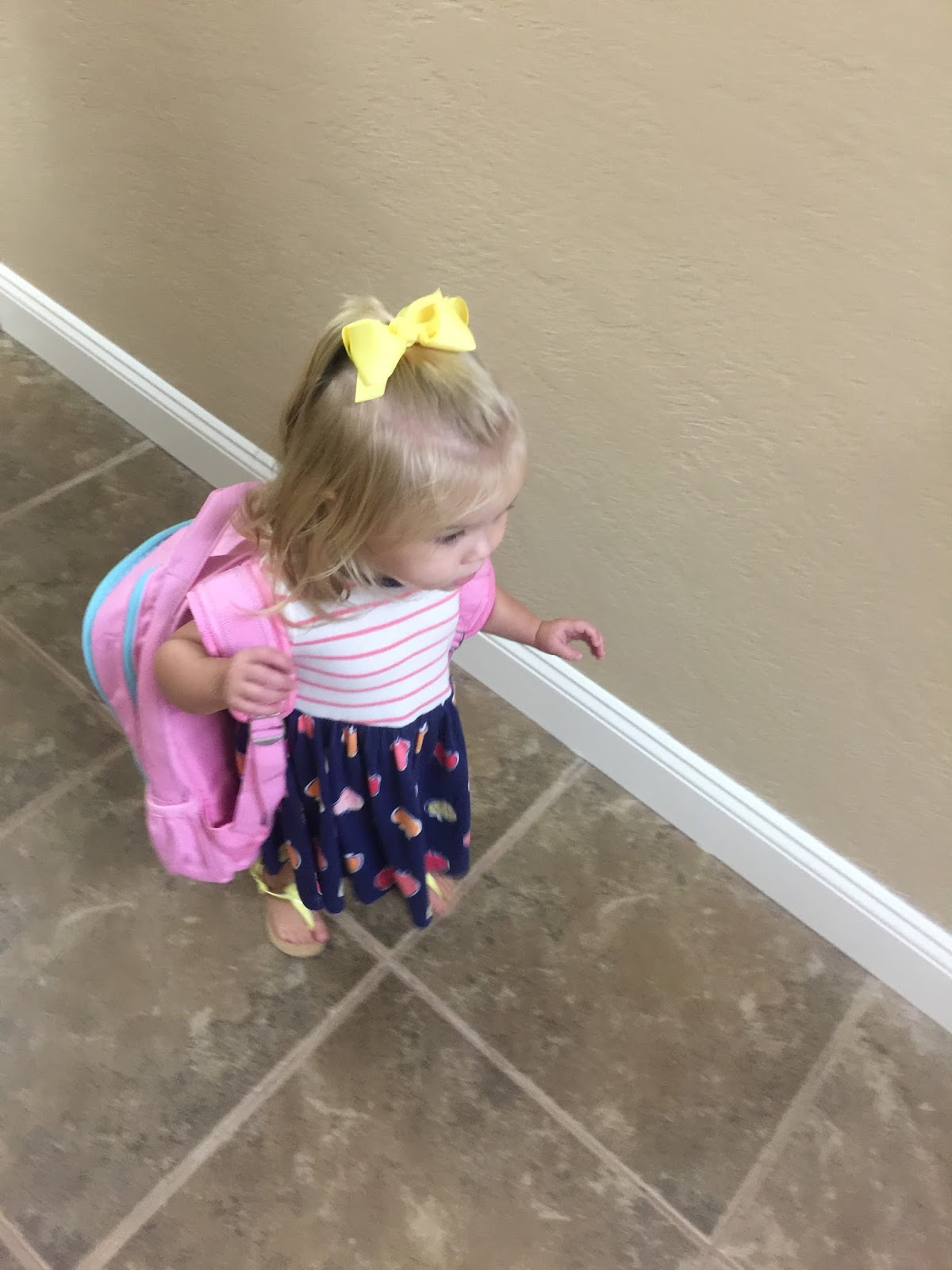 When we dropped Kye and Britt off on their first day they both did really well but I was prepared for a LOT of crying and a LOT of clinging from Tess. My goal was to not hold her at all and have her walk herself into class thinking that’d make it easier to leave. I love that Zach snapped this pic. She looks so nervous and I look so proud 😉 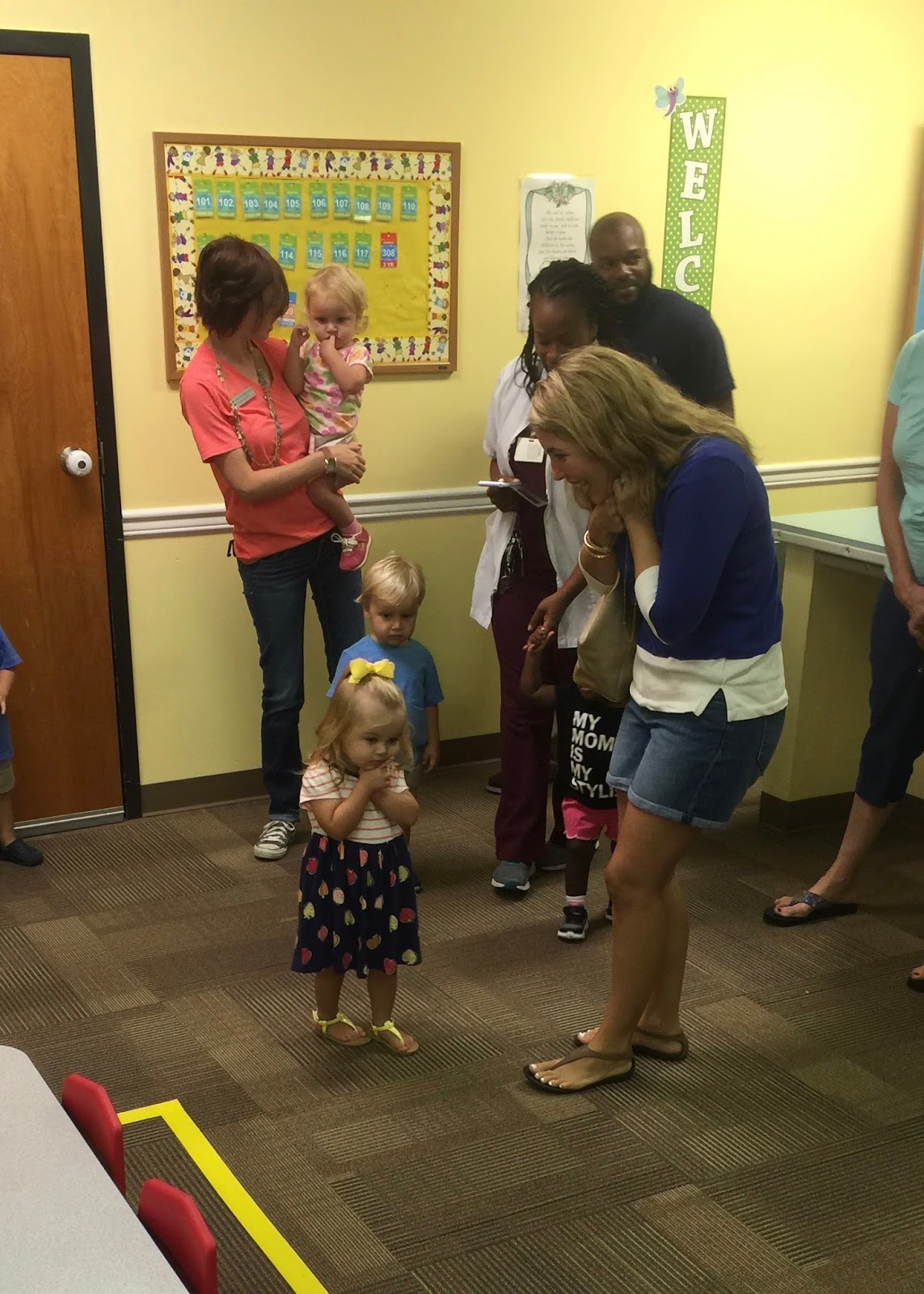 There were a LOT of kids and a LOT of parents and a LOT of toys and Tess jumped right into it all which surprised me. She usually doesn’t do well in large crowds especially in new environments. I think the toys helped 😉 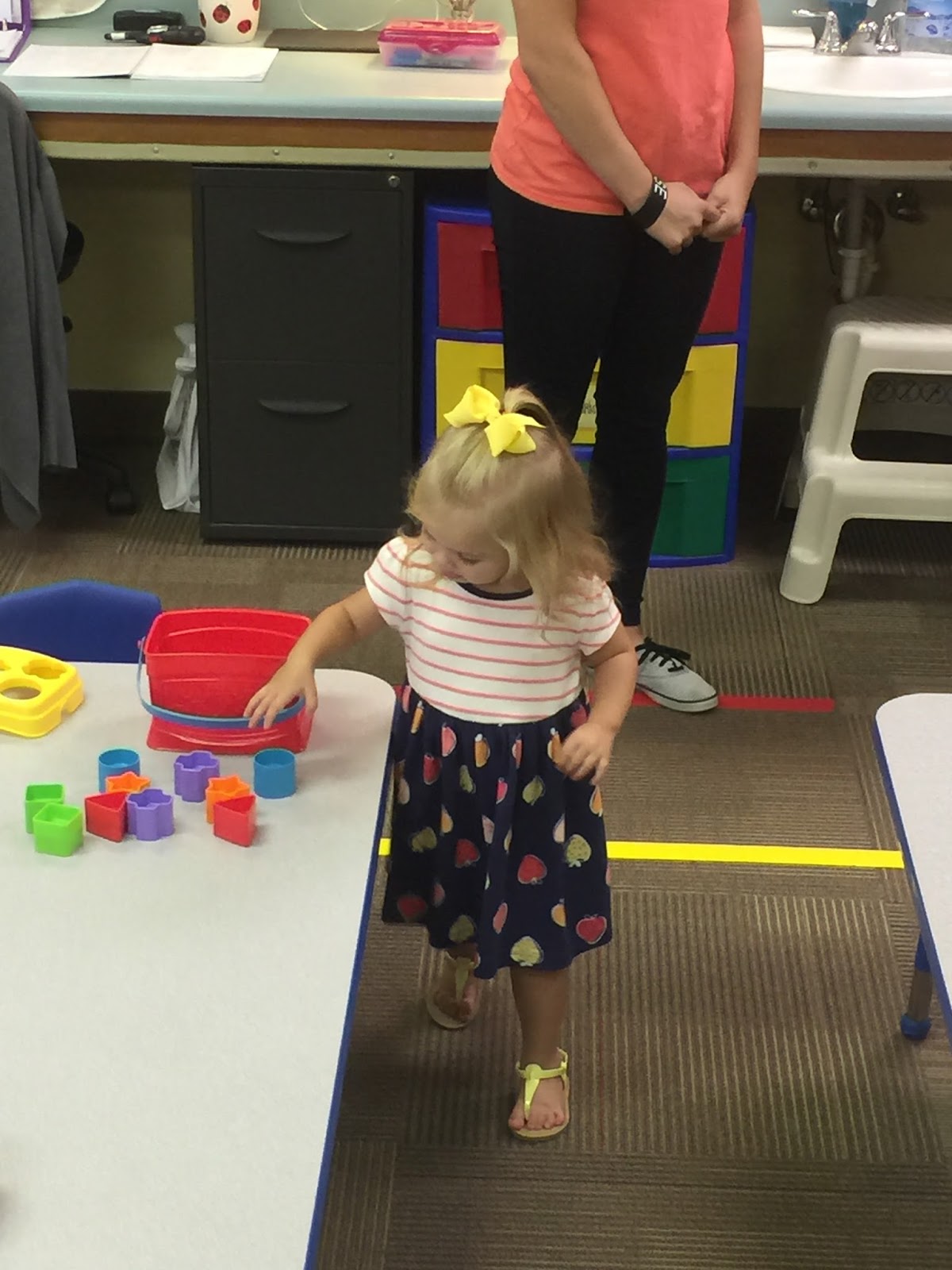 We found out that friends of ours have their son at the same school and he’s in Tess’s class too! He’s the oldest in the class and I believe she’s the youngest haha plus he’s super tall for his age anyway (his daddy is Zach’s height!) so they look like such opposites playing together! I’m glad he’s there to look out for her 😉 When we went to leave they were playing together. We snuck out. Which I know people say not to do but when you have a kid that clings you have to sneak out! It’s the only way to survive! She cried. My heart broke. But I kept on walking and knew she’d have fun once we were gone! 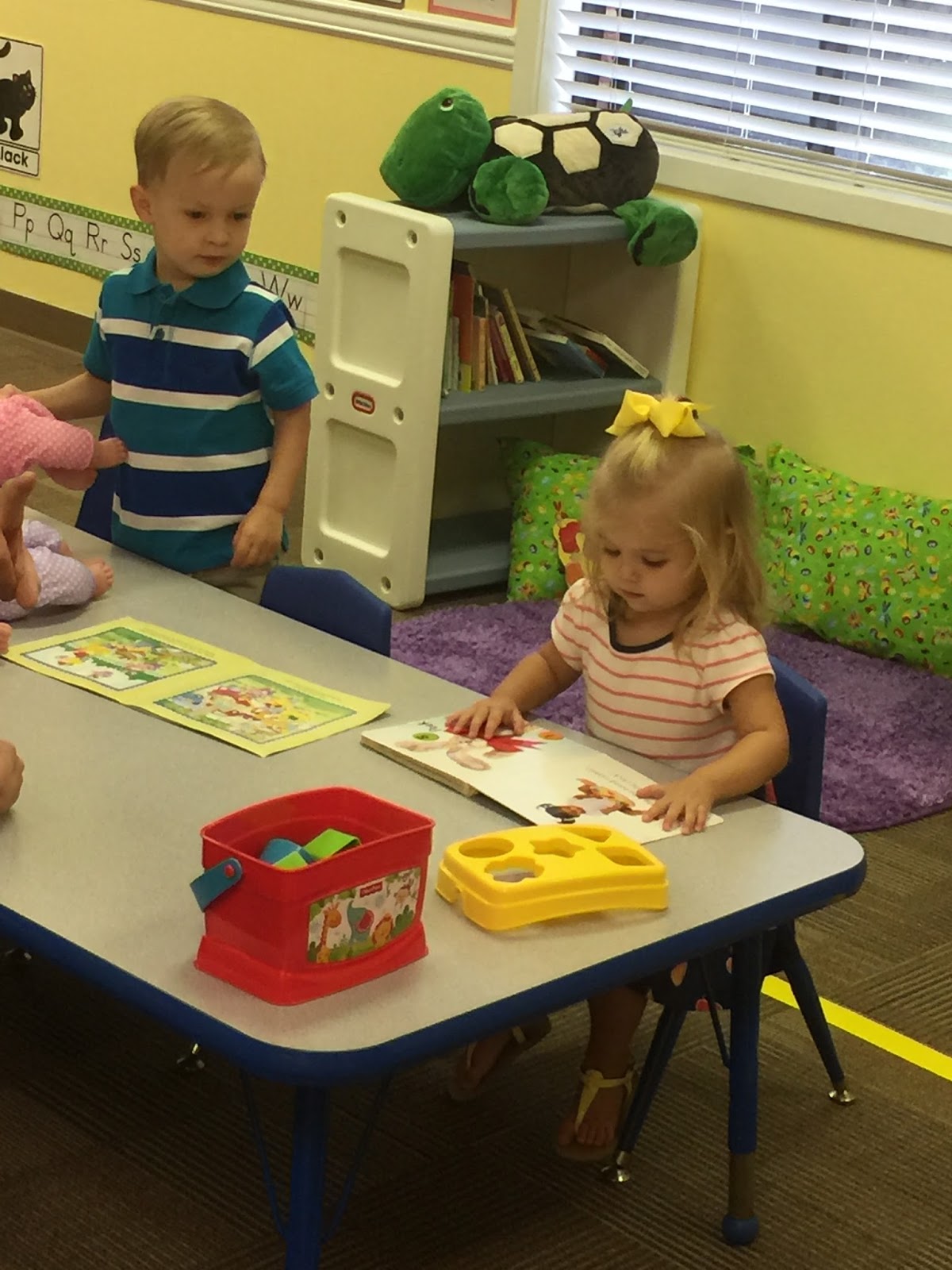 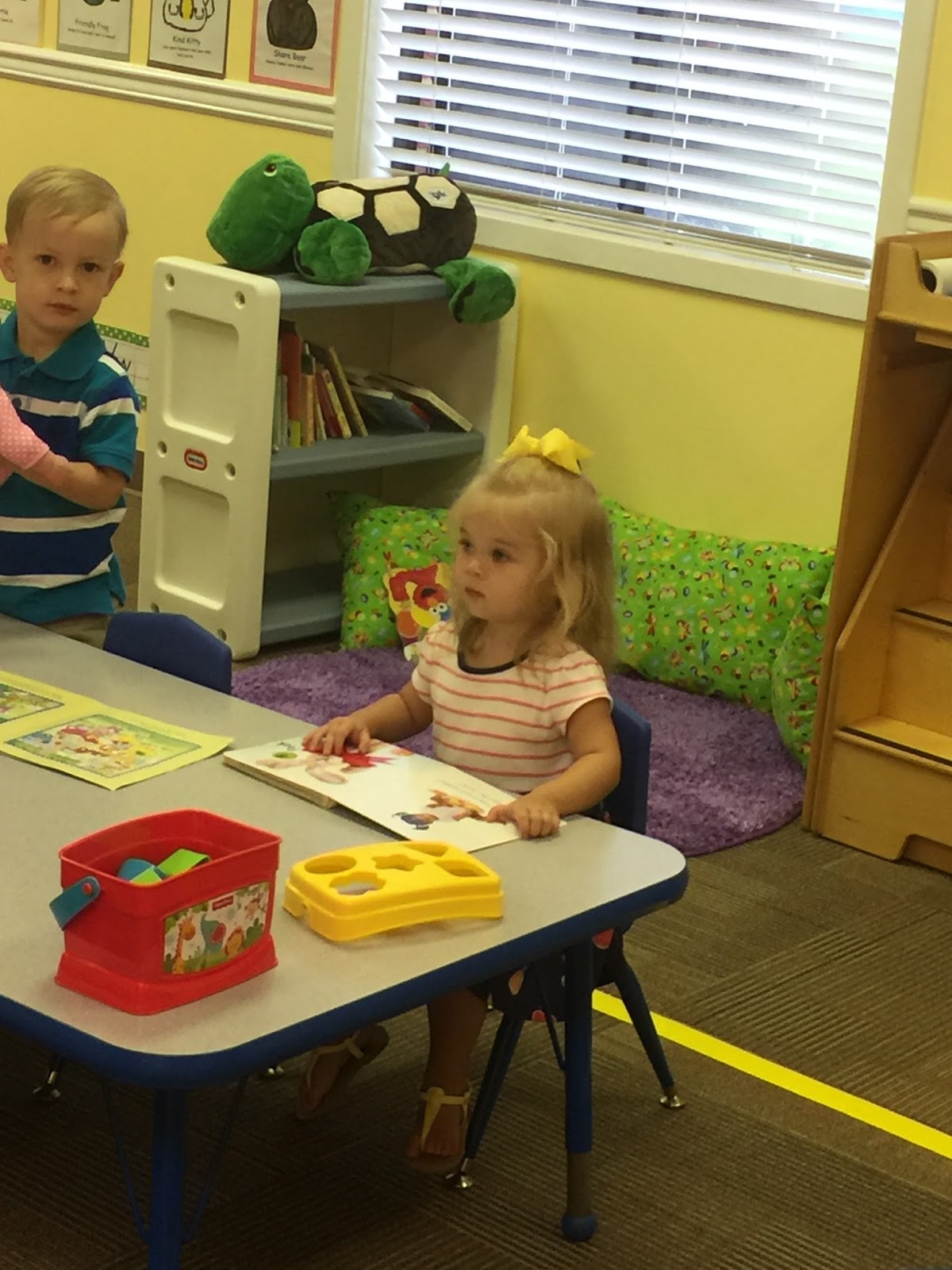 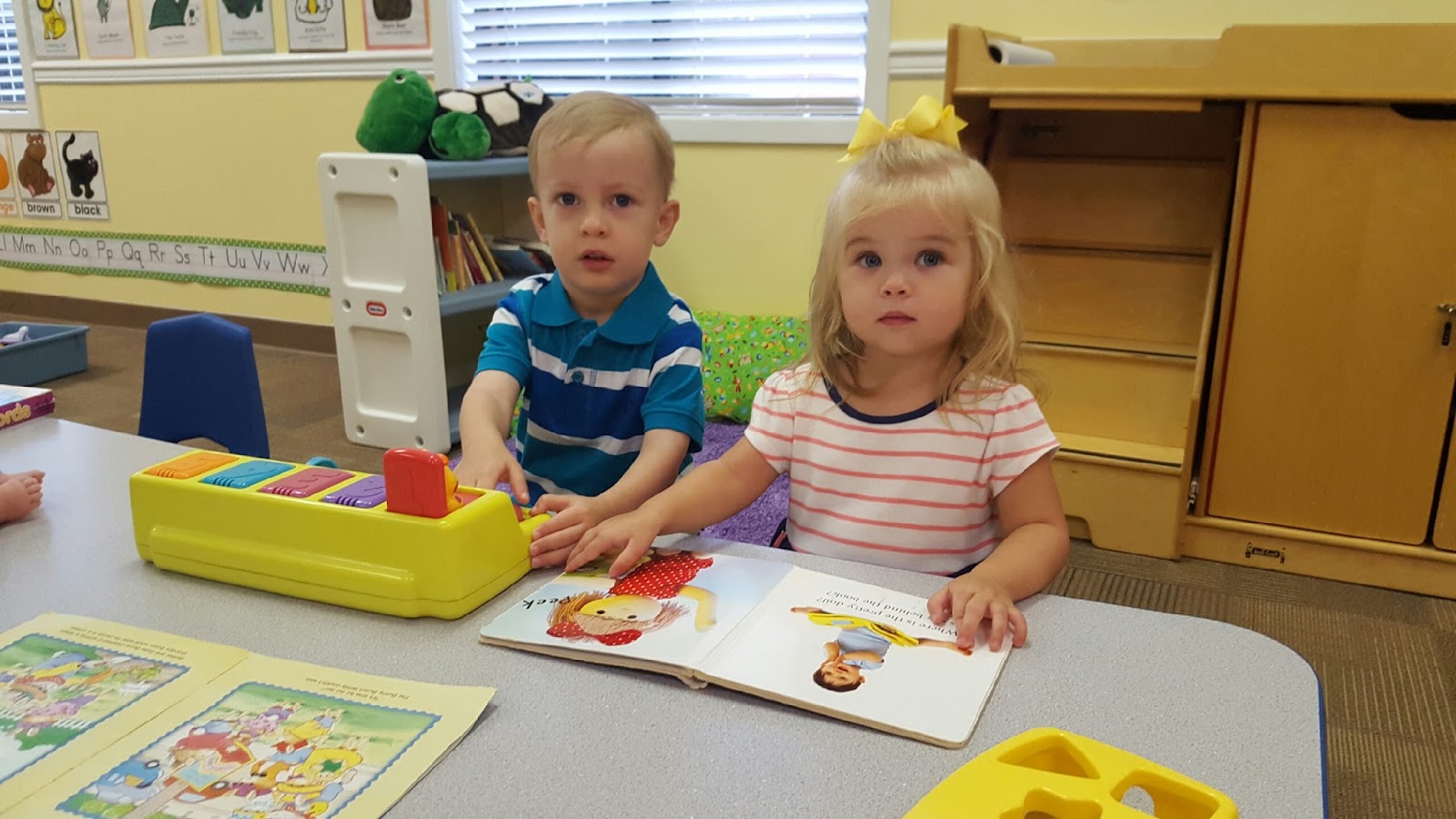 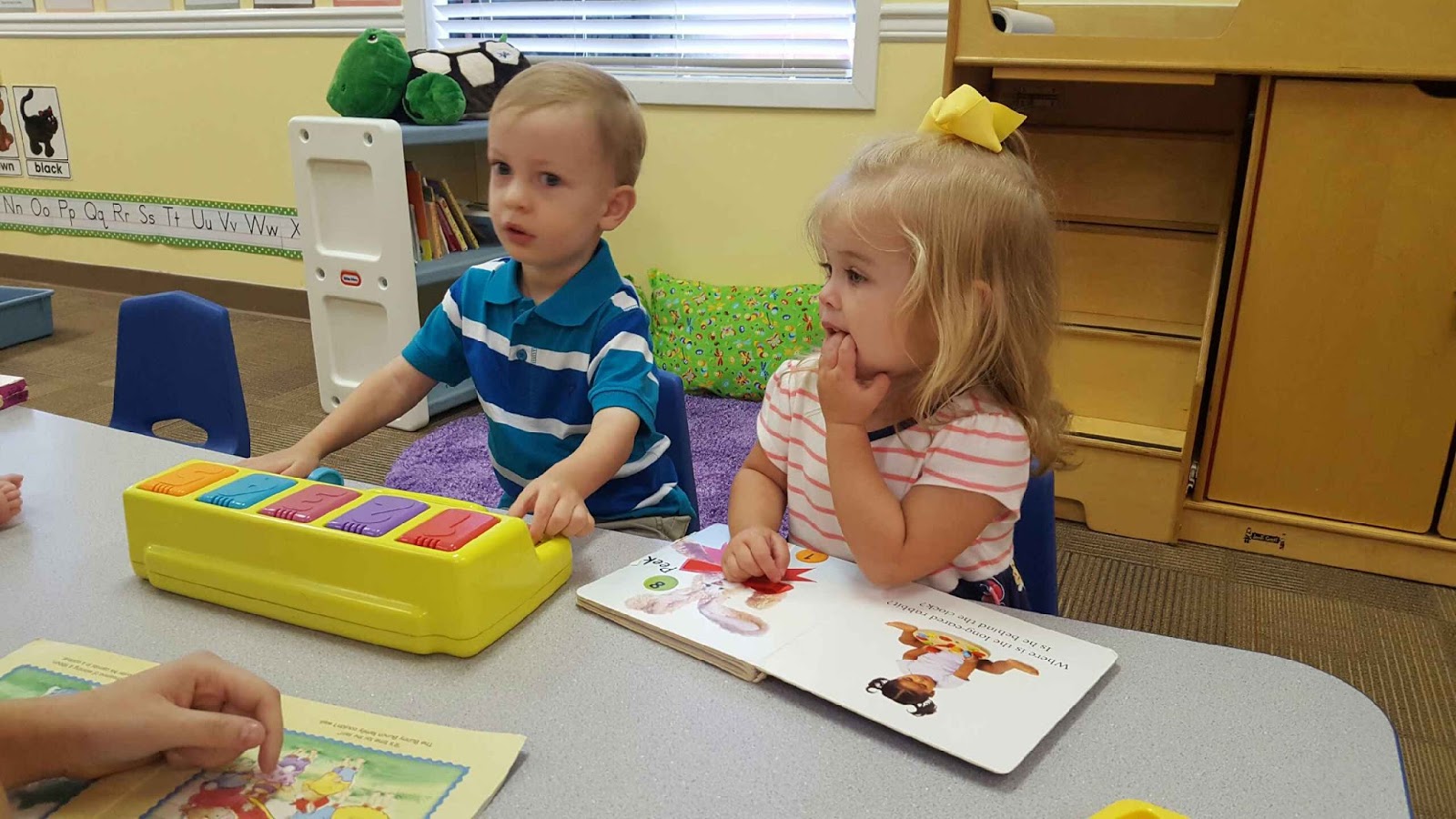 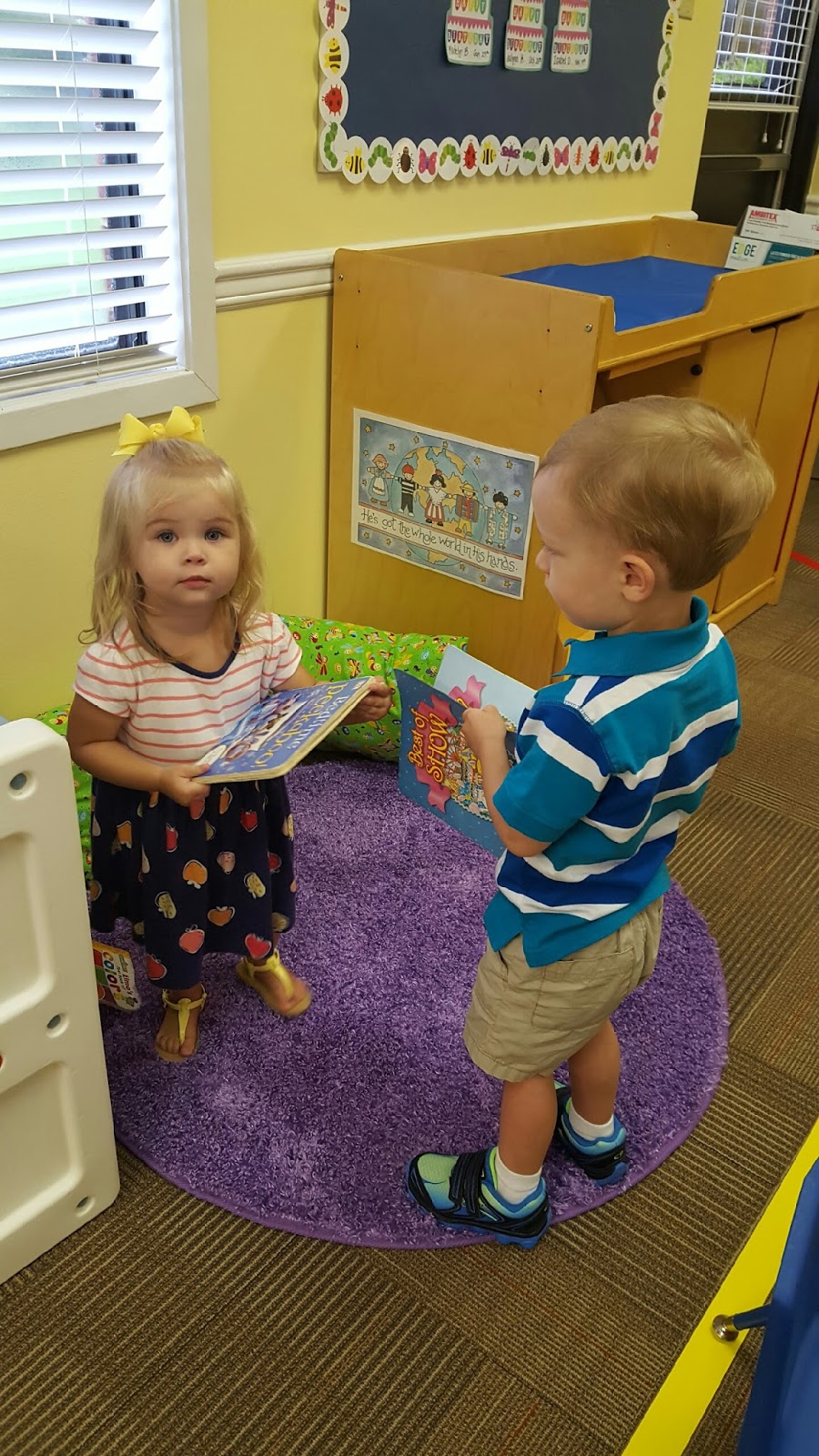 For the first time since Kye’s first day of preschool I have ALONE TIME. And really even when Kye started school, I was pregnant with Britt and only had that alone time for a couple months before she was born. This is my first time not being pregnant and having solo time during the day since Zach and I got married…so 9 years 😉

I knew it’d make me sad to be home alone so the first day of school Zach and I did a bunch of home study stuff for the adoption together. It made the time fly by and was FUN be kidless. The next time she had school I ran errands. I was in Hobby Lobby waiting to do returns from Tess’s party (super smart not to have kids with me for that) and a pregnant mom was in front of me with her toddler. She was bribing him to sit still and be quiet and I instantly started crying. I’m always that mom. The one with the kids or the pregnant belly. The one hoping my kids behave so I can finish up my errand. The one older ladies look at and smile because they “remember when.” I’m NOT ready to be the other mom. The one with kids all in school and the one who is thin b/c she’s done having babies. Legit I went into the bathroom and BAWLED about it. I love this phase of life and I’m in no hurry for it to be over. So thankful we have Tab coming someday in the future, because I’m def not ready to be done with babies in our home or in my shopping cart 🙂

Once I dried it up and started shopping I felt better and I saw a bunch of kids misbehaving and did smile and think how nice it was to get errands done so quickly. It’s only two mornings a week! I will survive! I def think it’s been a tougher thing on me than on her. I get a lump in my throat when I leave her and I truly MISS her when she’s gone and am SO eager to see her when I pick her up.

She’s doing GREAT though! I mean it’s tough to know her perspective on things but I can tell she’s learning colors and she enjoys snack time haha. Her teacher has only had positive things to say and she no longer cries when I drop her off in the mornings. It’s been a good fit and it’s been nice having the few hours a couple days a week to get things done too 🙂 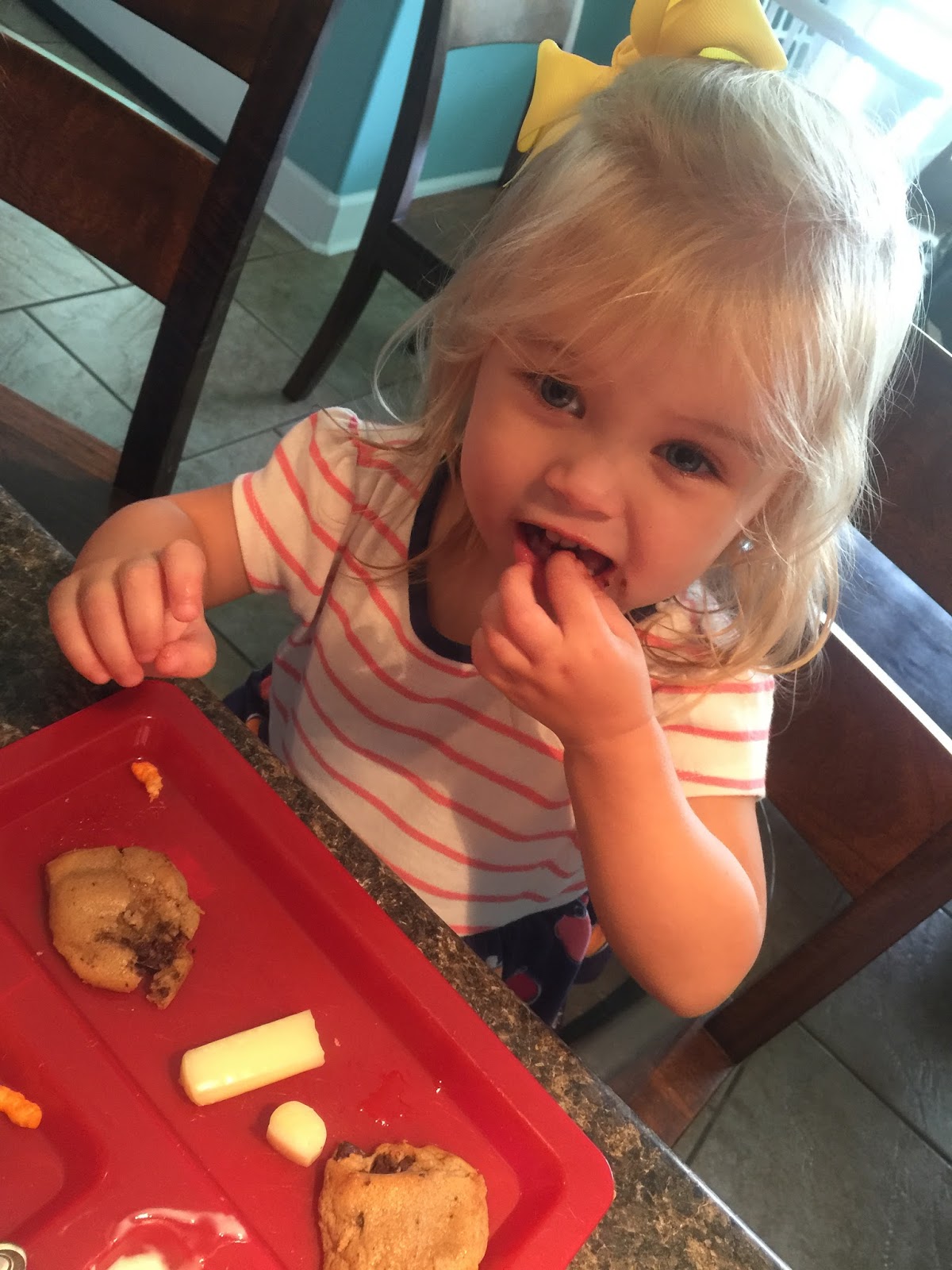