Zach introduced me to St. Augustine back when we were in our early dating days and somehow it became our tradition to go there every year for the 4th of July. When we were engaged and had to figure out which family would get what holiday (a total complete nightmare chore for sure…) we decided that the 4th would be the one holiday we’d set aside for just our family to do together and we decided to spend it every year in St. Augustine!

Typically our trip is rather short. We always do things on the cheap side and St. Augustine is not a cheap place so we will usually only stay one night, if even that. Last year was fun as it was our first trip there with Kye but it was also a mess because we were there for one day and totally skipped all his naps (our first and only time doing that!) and he was miserable. This time we wanted to do it right and we decided to re-visit the hotel we stayed at for Brandon and Chrissy’s wedding (The Inn at Camachee Harbor). We picked this location again because they allow dogs, are centrally located near both the beach and Old Town, the rooms have refridgerators and microwaves, and we knew the pack and play would fit (last year we had him in the shower remember?). The lady was SUPER nice and worked out a good deal with us since we stayed there back in March. She also let me pay on our balance a little each month so we could spread out the cost. We went down Friday morning and stayed through Monday! It was WONDERFUL actually getting to stay more than 24 hours and to get to feel like a real vacation!

After such little sleep Thursday night Zach and I were both dragging on Friday but still rushed to leave as quickly as we could. I wanted to get down and checked in before Kye’s nap at 12:30 (as we’ve been dropping his morning nap). I was hoping he’d stay awake the whole time on the ride down then go to sleep when we checked in. Well, it didn’t quite work out that way.

the little hallway/cubby hole perfect for a pack and play 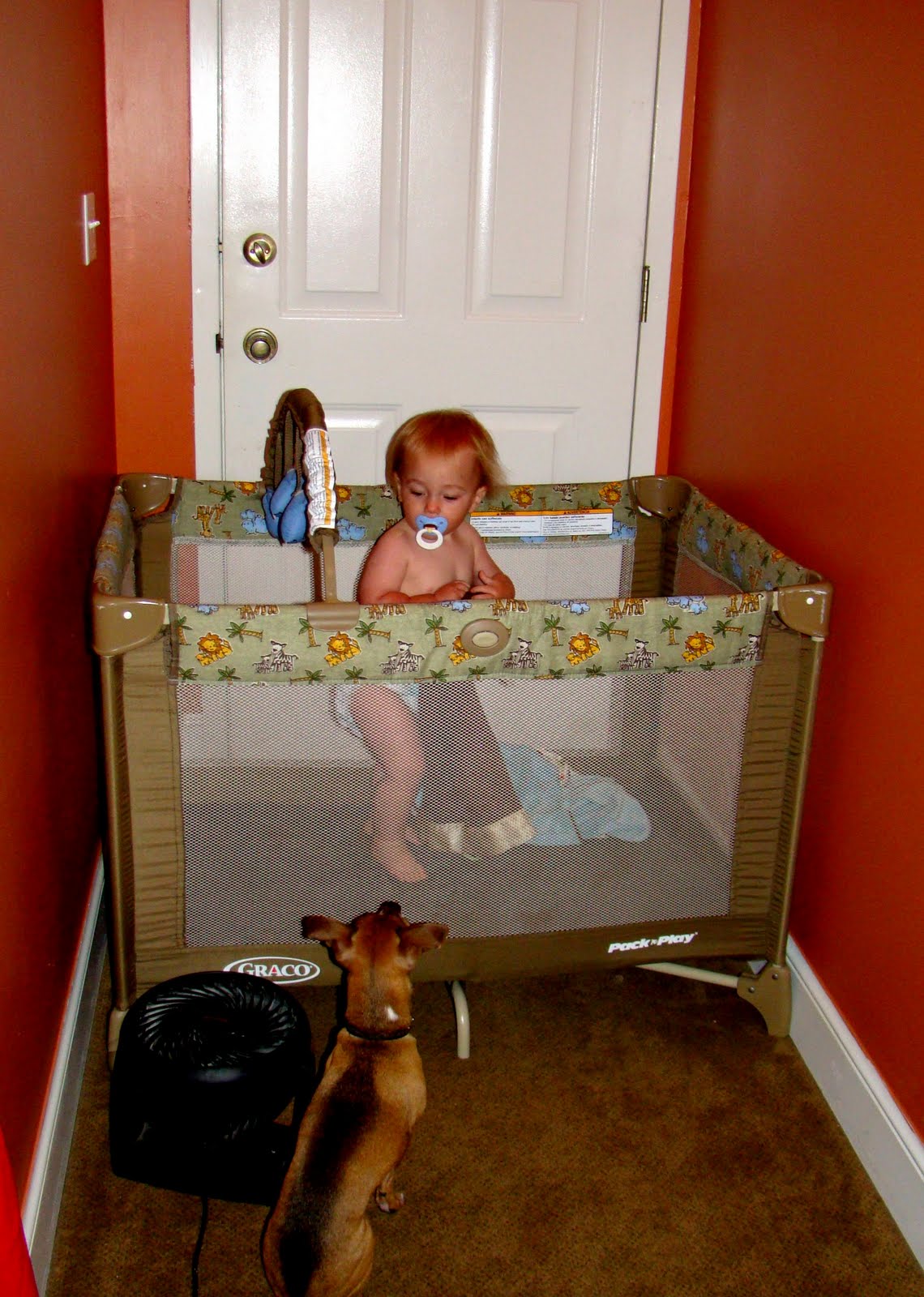 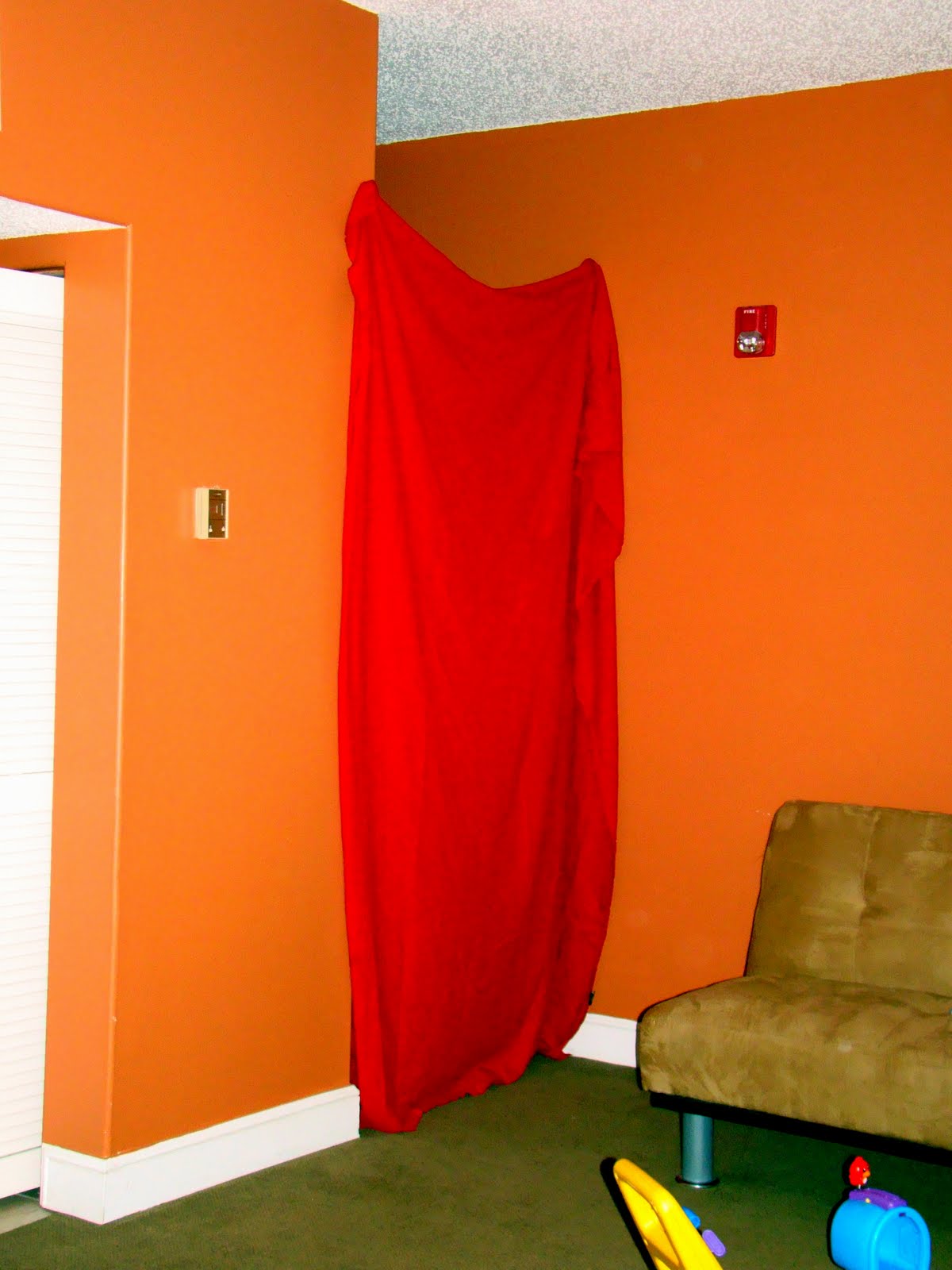 While Kye was tired he wouldn’t go to sleep. It was rough but we ended up just getting him out of the bed after an hour and a half of him whining and NOT sleeping. Boo!

While Kye “napped” we ate Subway! 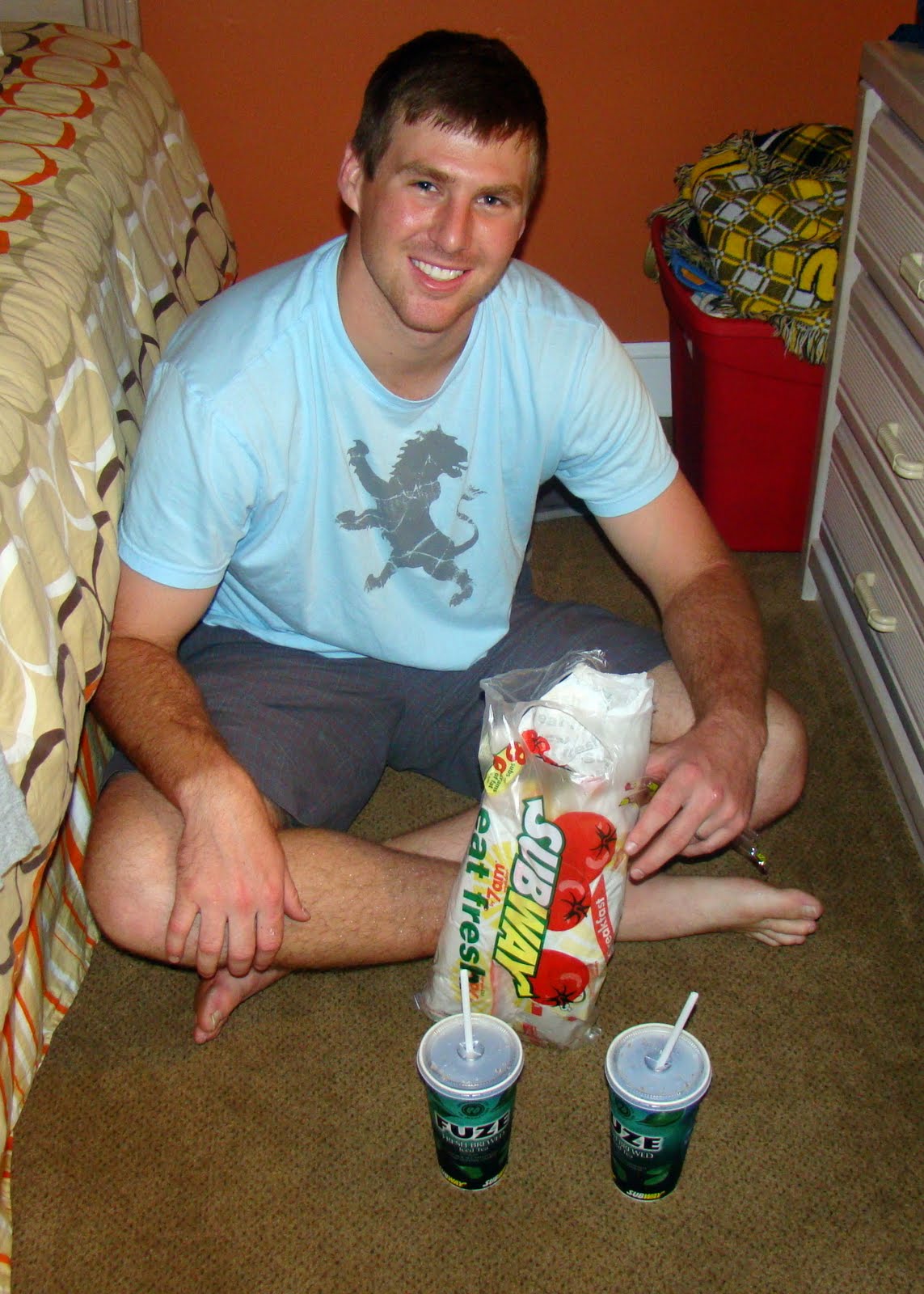 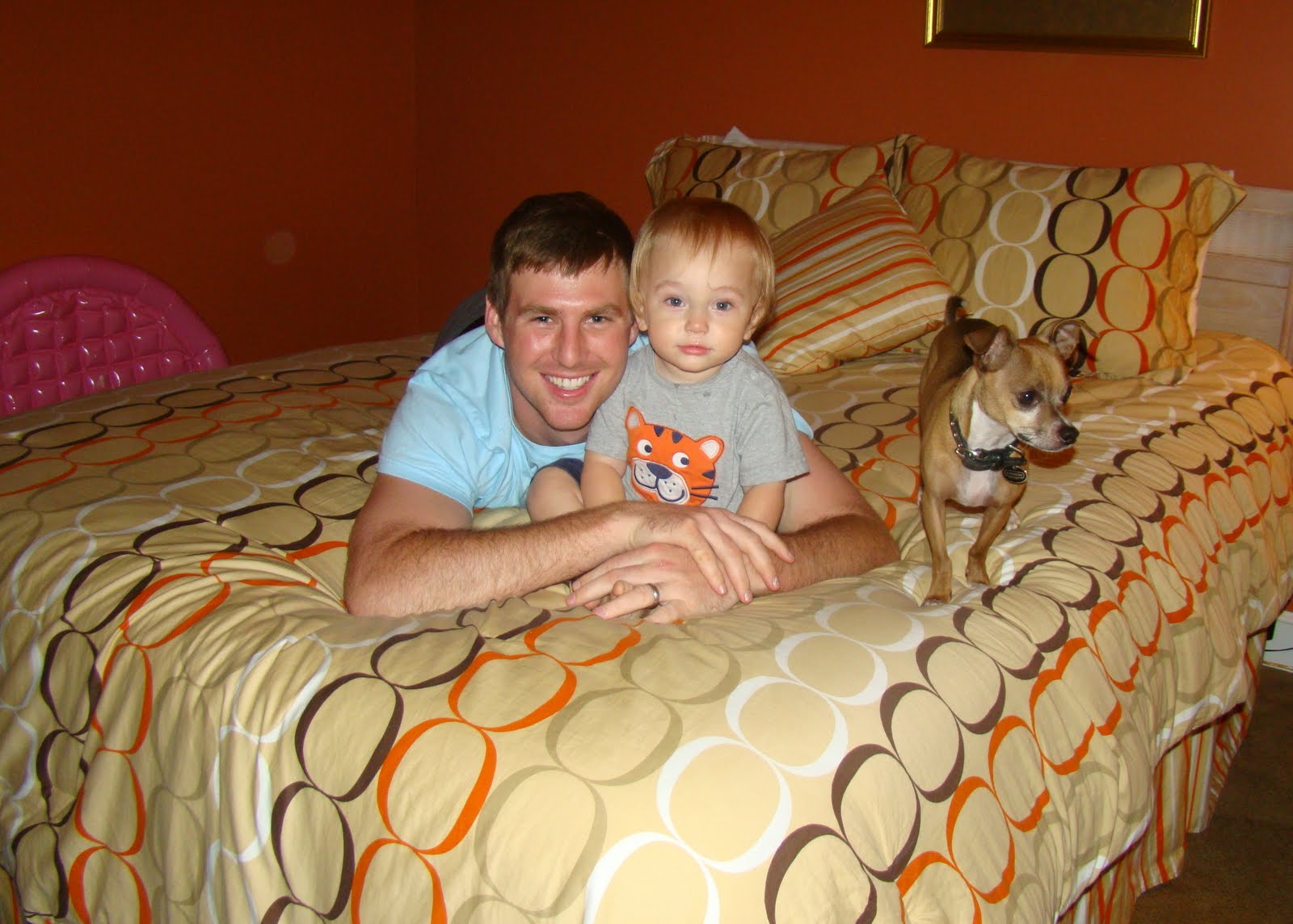 Once Kye was officially up we headed to Old Town. The weather did not look promising for the weekend and we wanted to make sure we got to explore Old Town as it’s a St. Augustine must! ALL of us were EXHAUSTED but somehow we survived it and still had a good time 🙂 We decided last year that every trip we take to St. Augustine that we’d get pictures on one of the cannons. Kye was too tired for the pictures to turn out half as cute as last years but we tried our best! 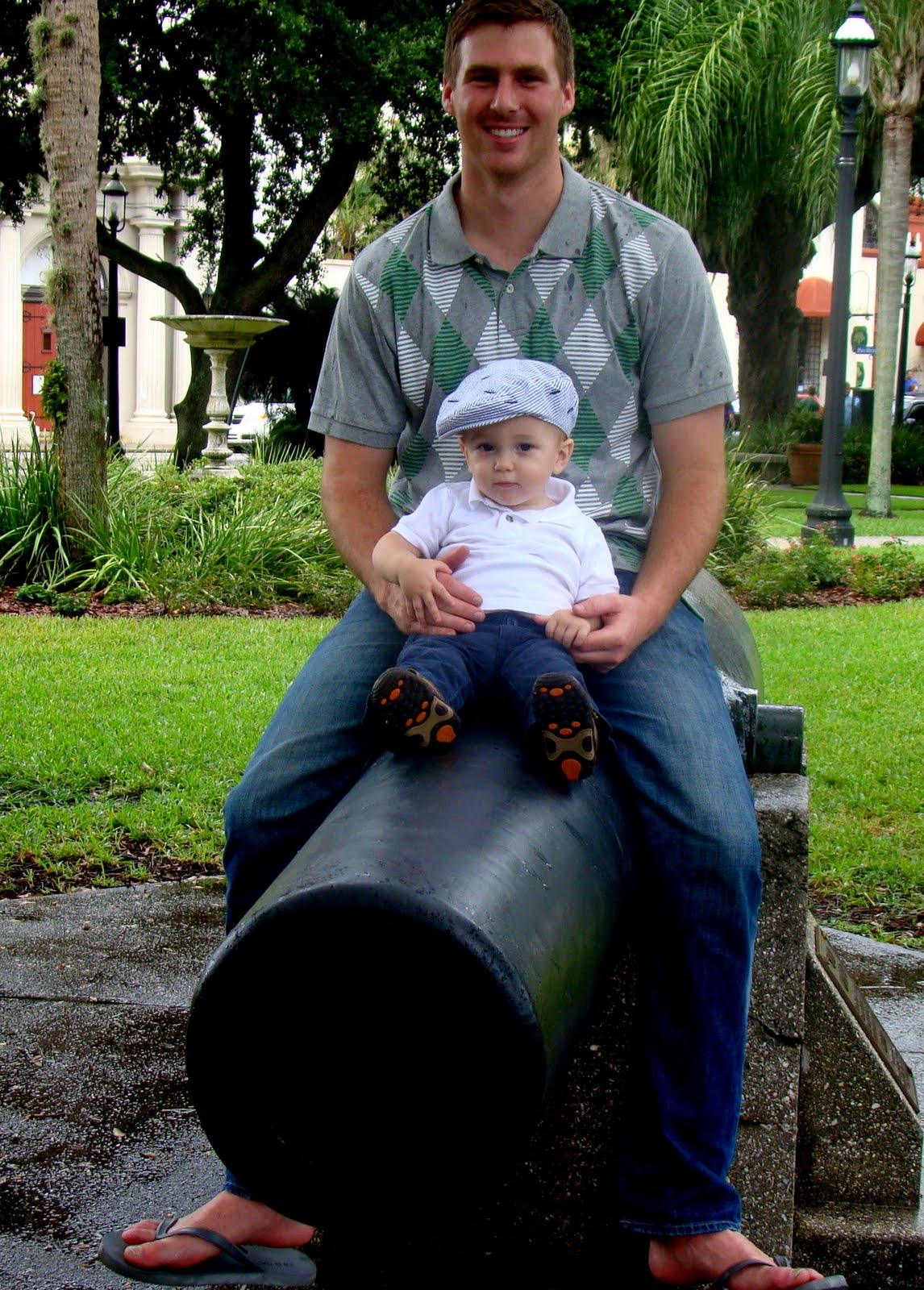 too sleepy for pictures 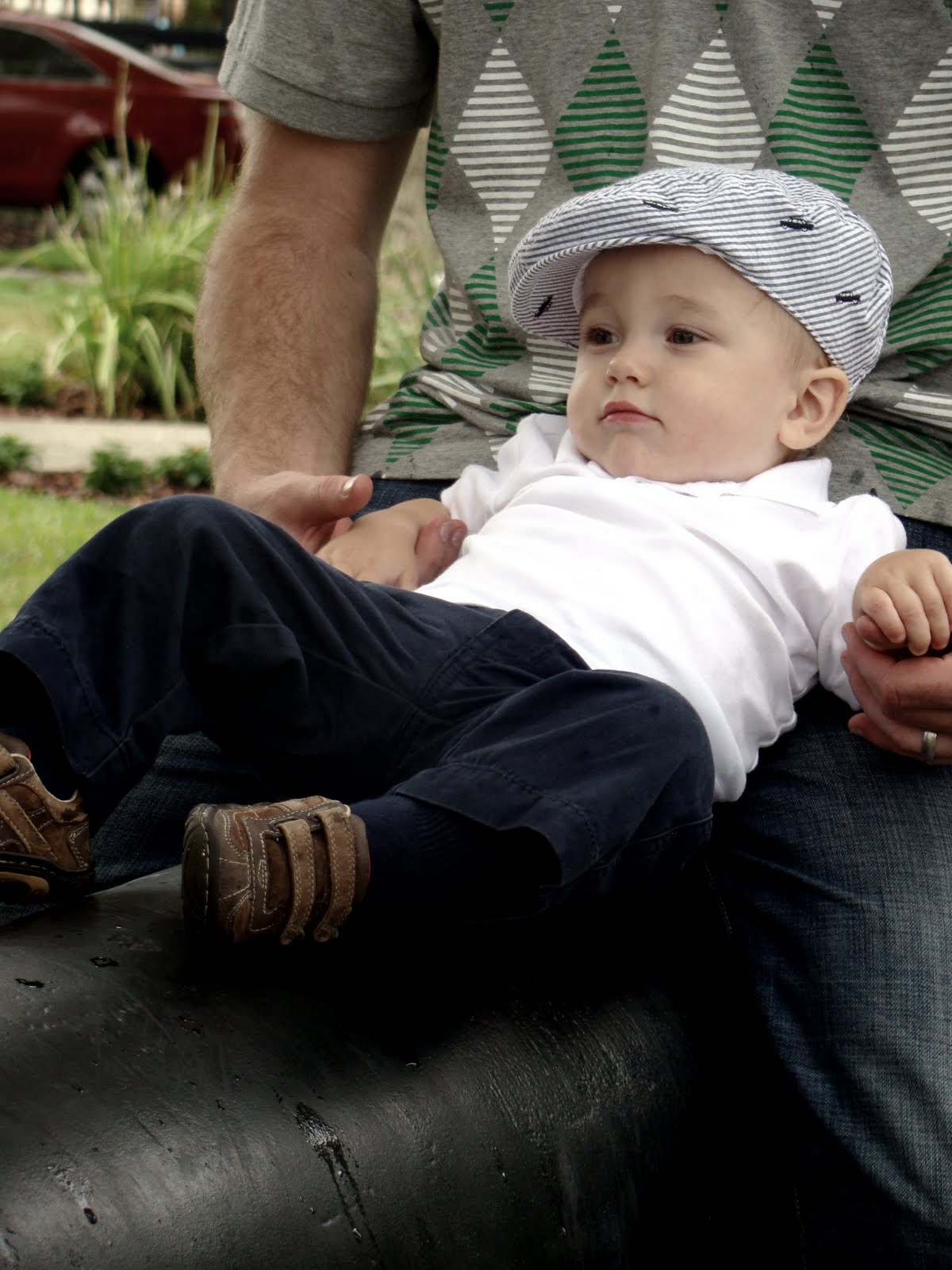 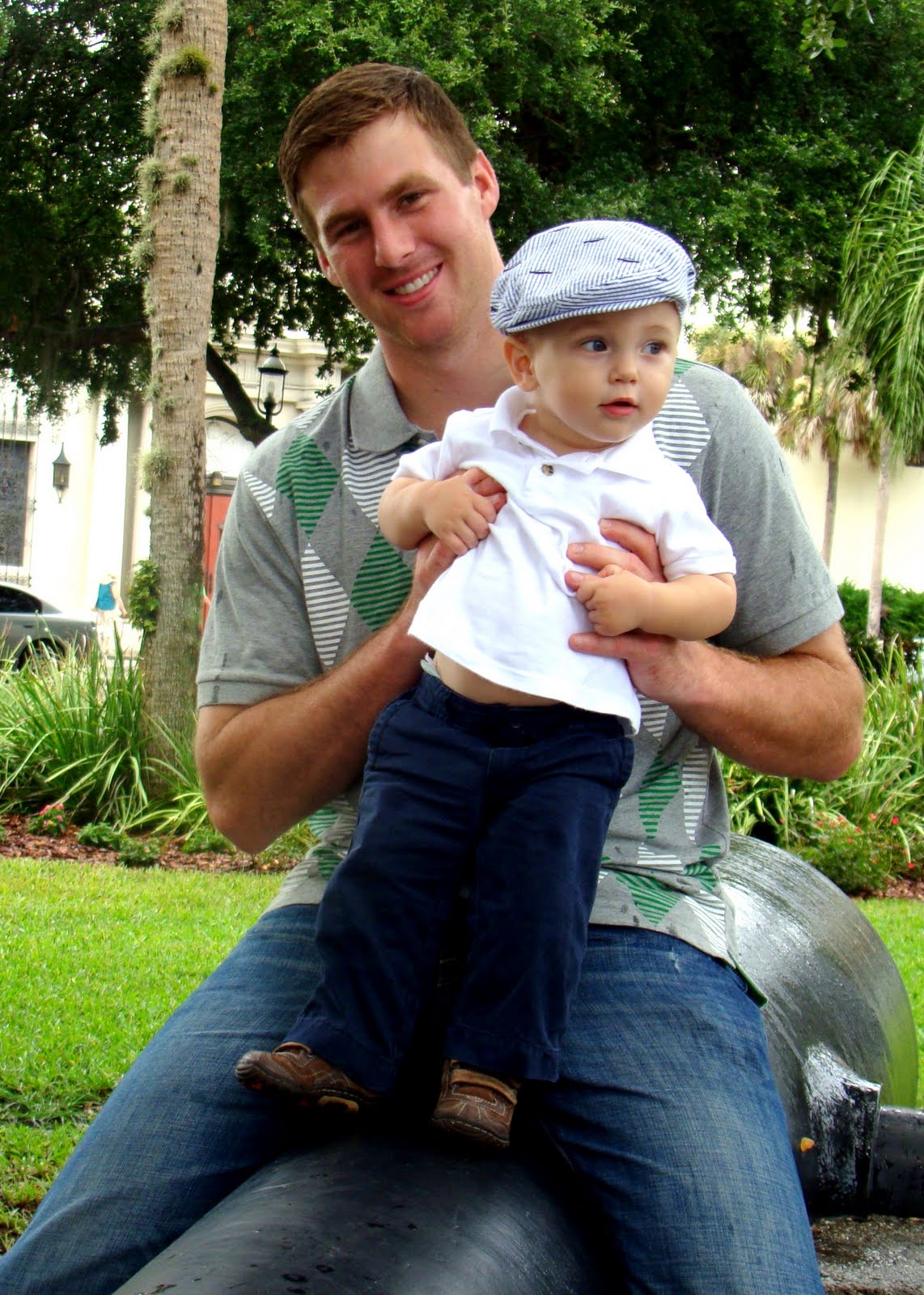 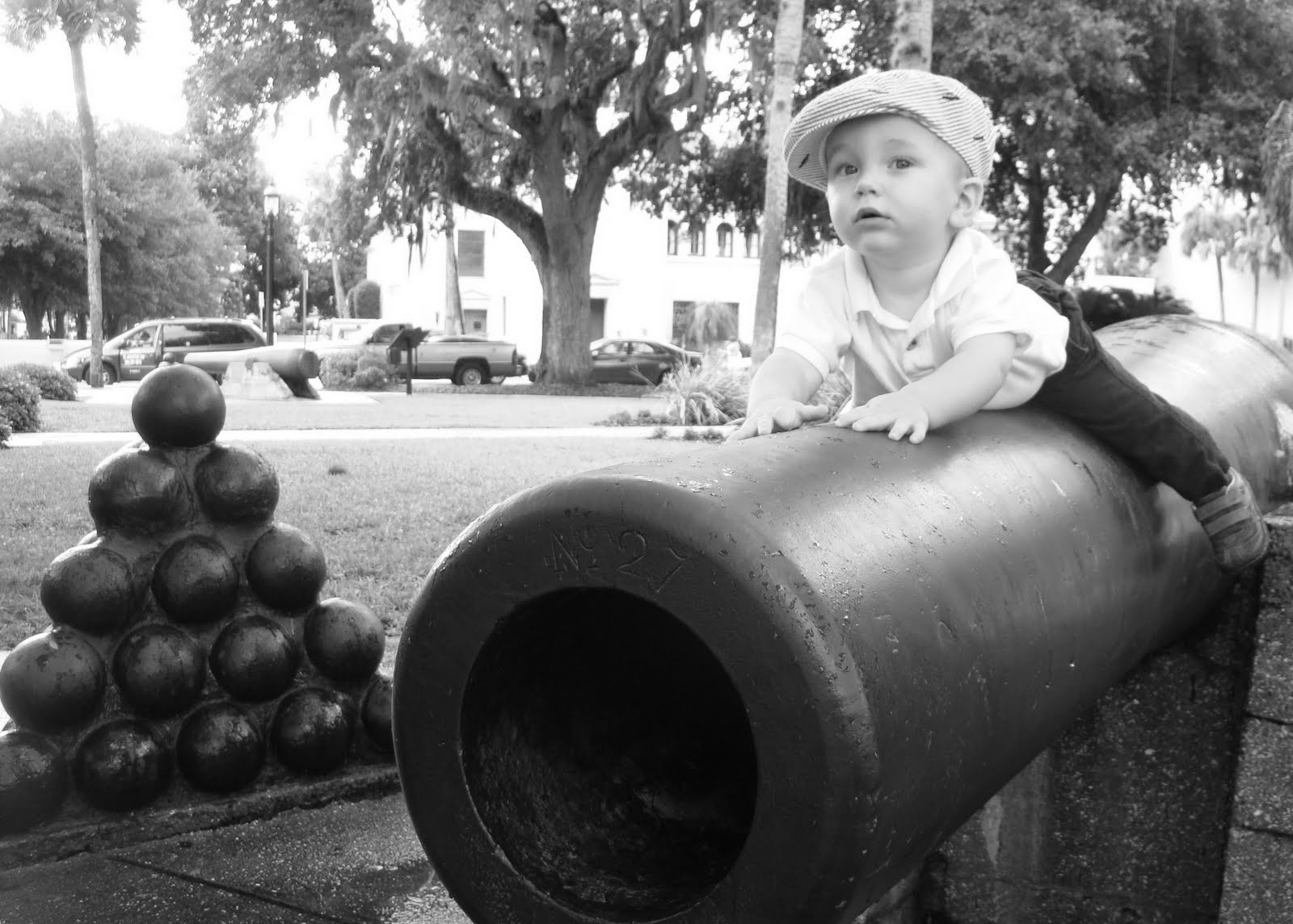 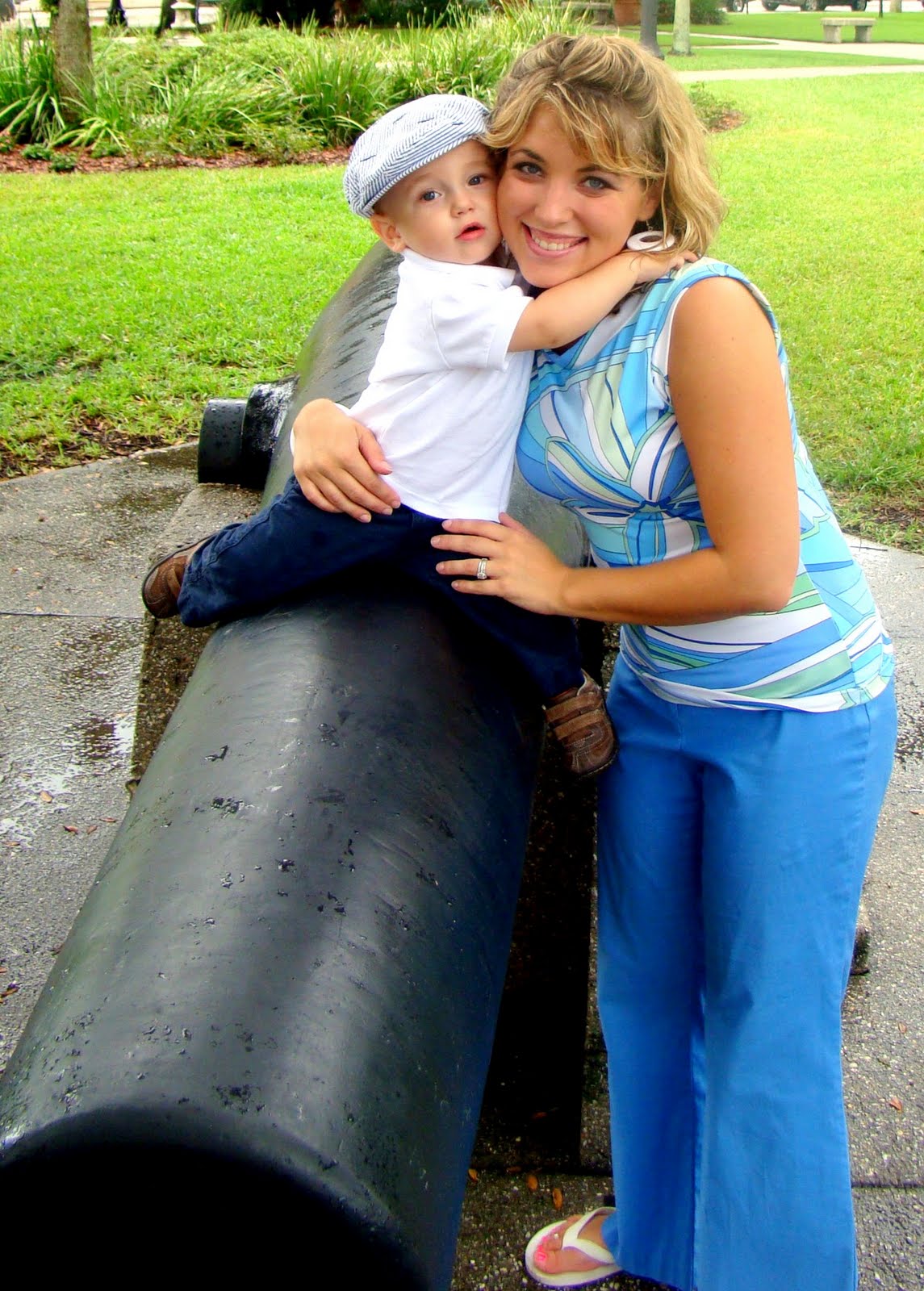 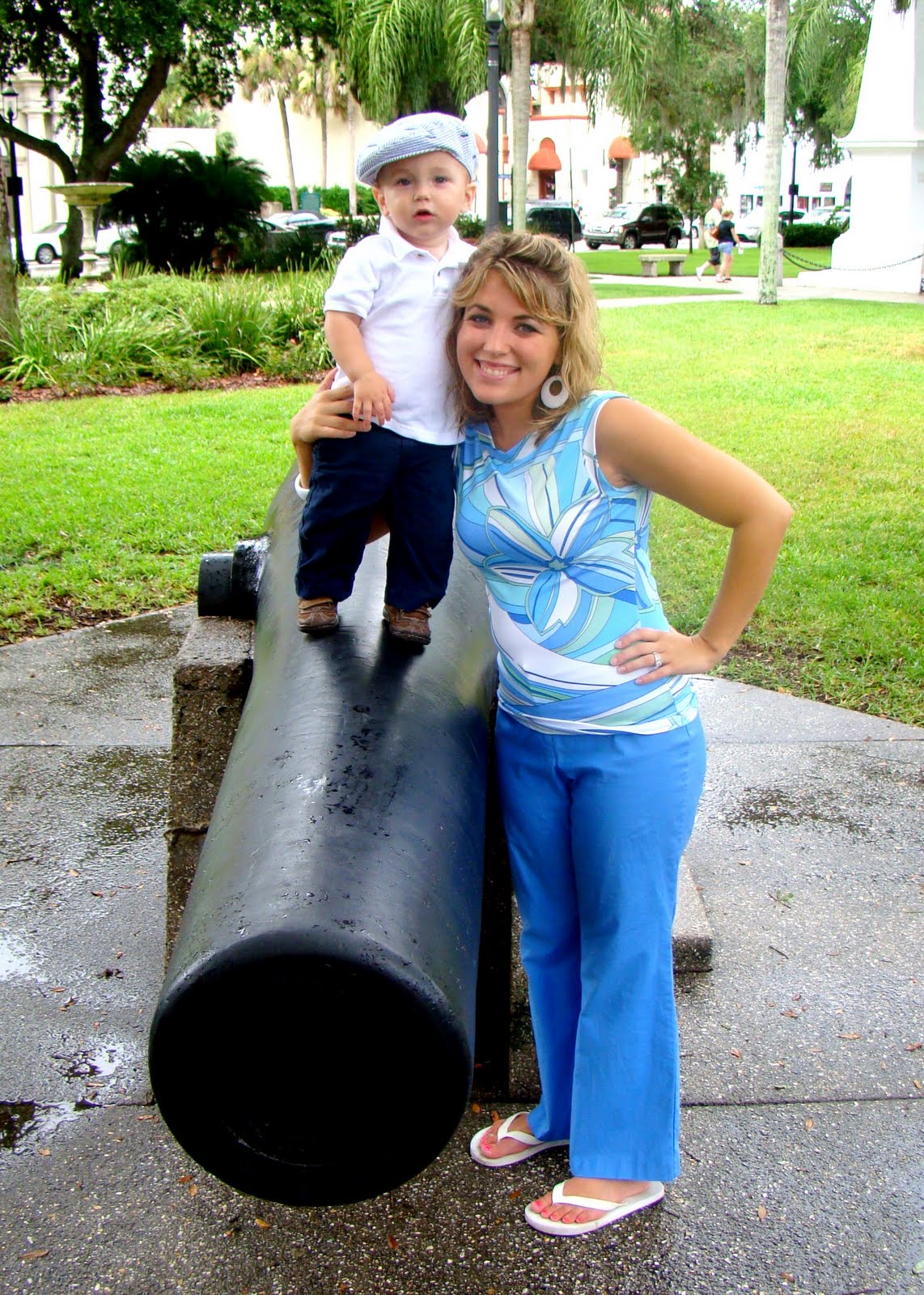 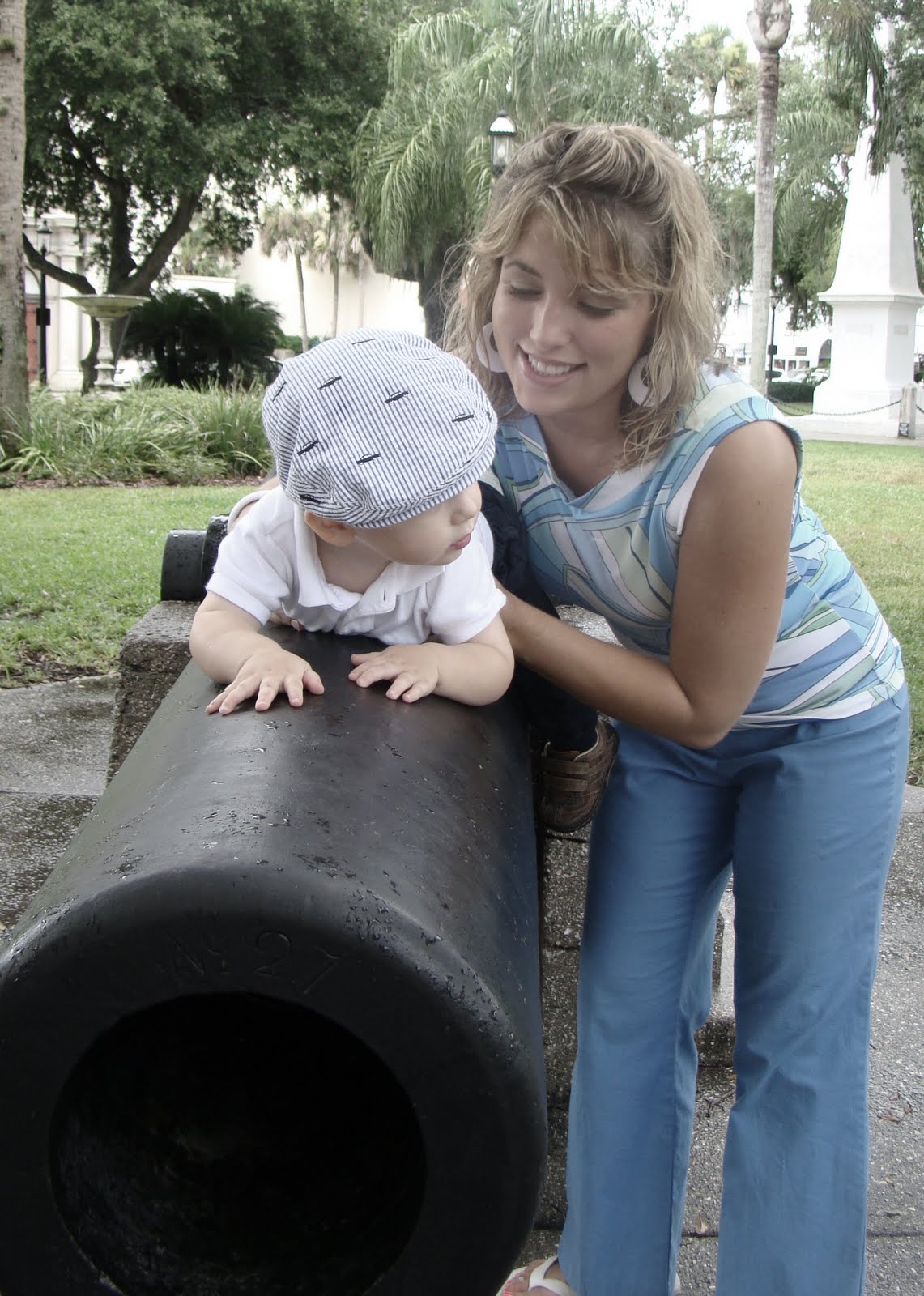 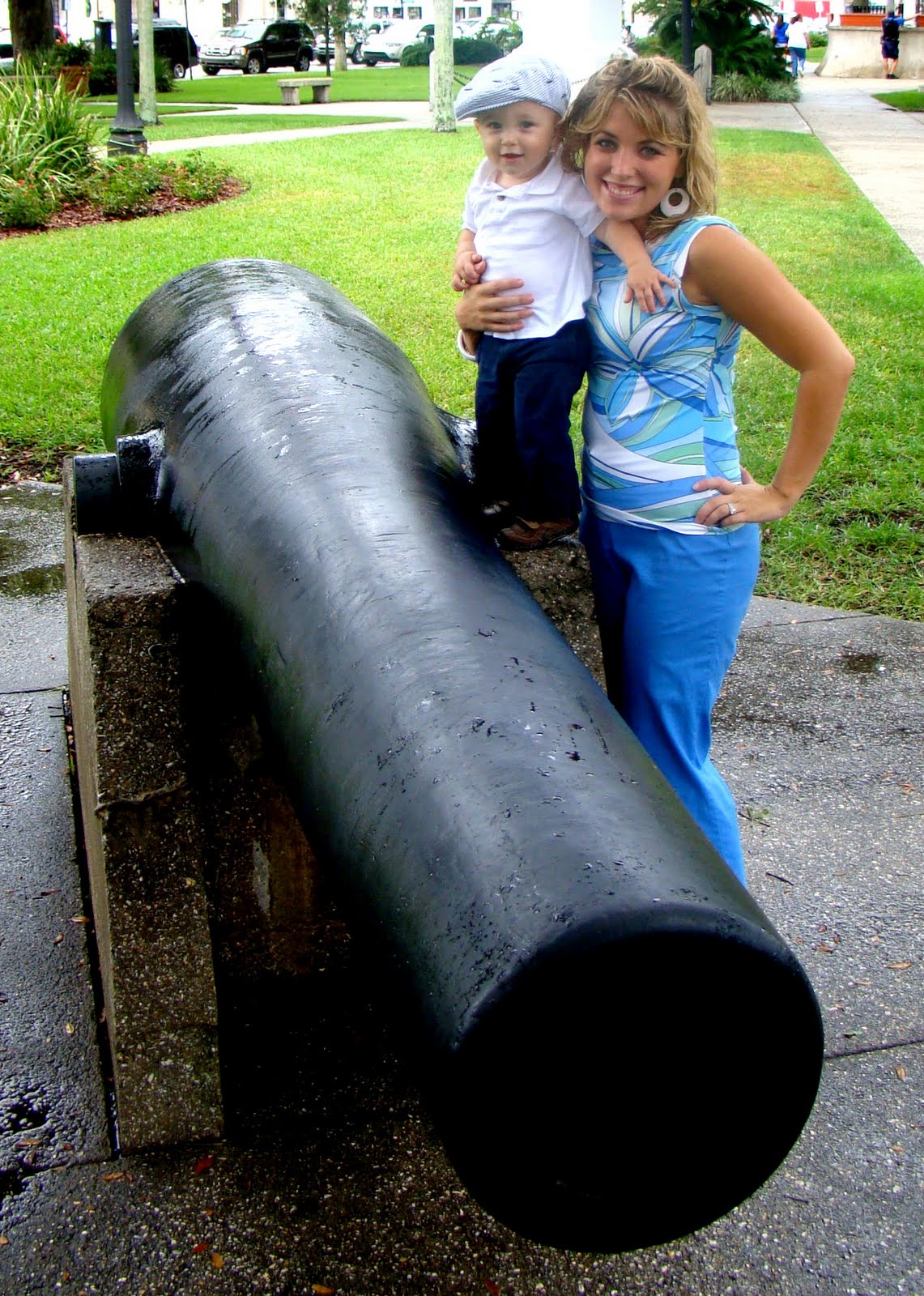 After our semi-failed attempt at a cannon picture we explored more of Old Town before dinner. We got some free samples of ice cream, bought our Christmas ornament to remember our trip, and watched a magic show at the Magic Shop. We even let Kye out of the stroller to run around the practically empty streets (I don’t know if it was due to the weather or the economy but the place was pretty vacant!). 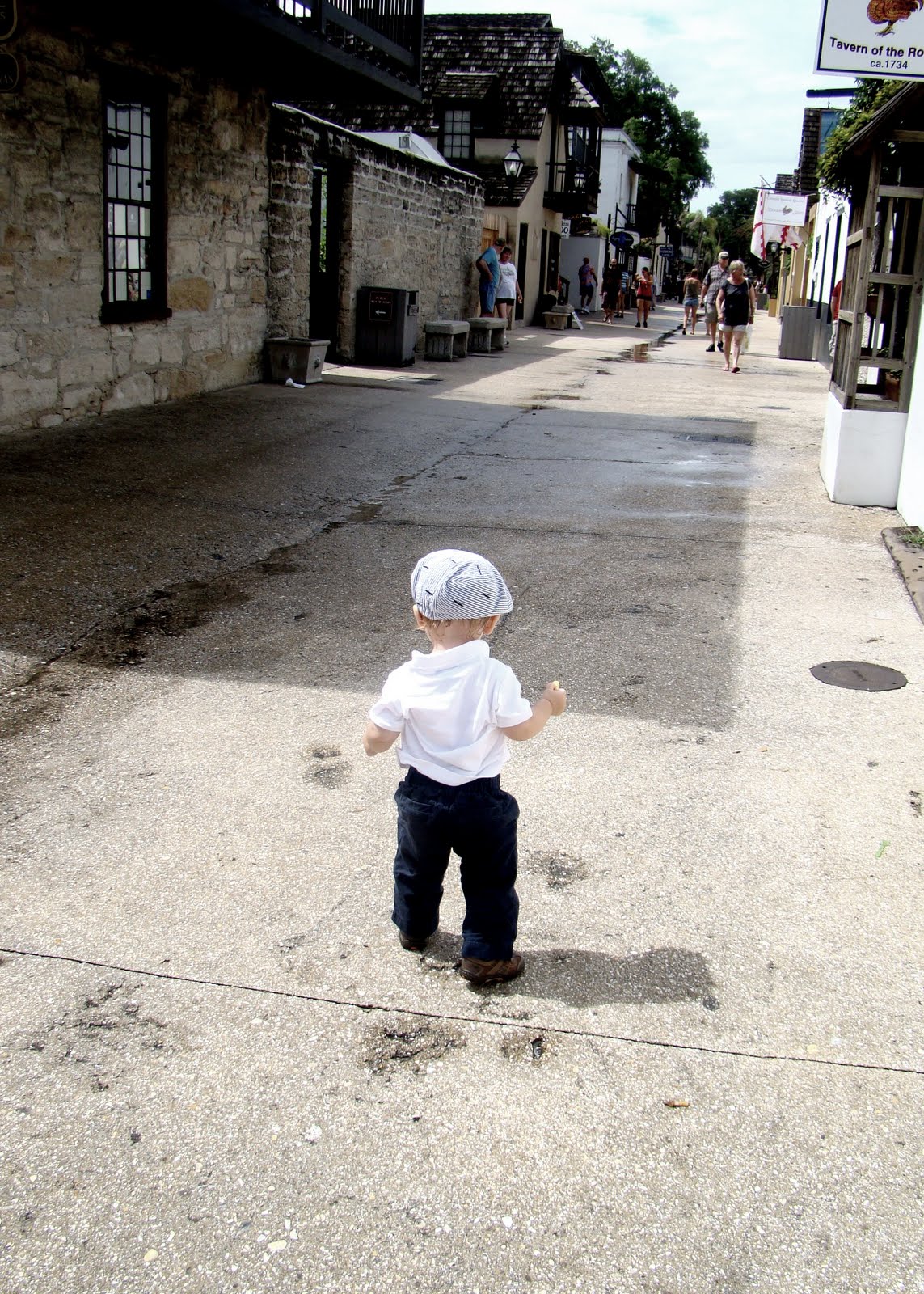 can you tell my guys are tired? 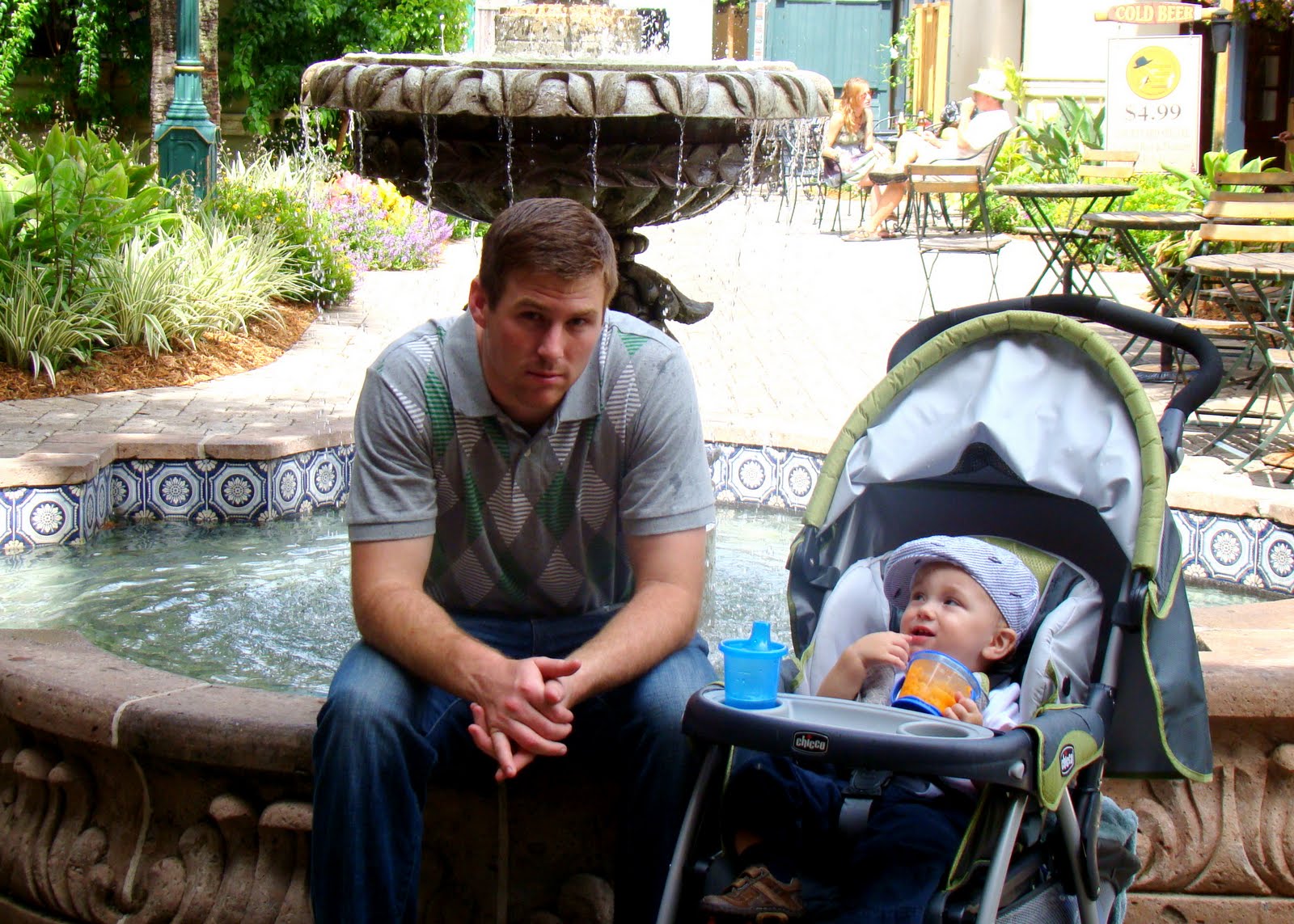 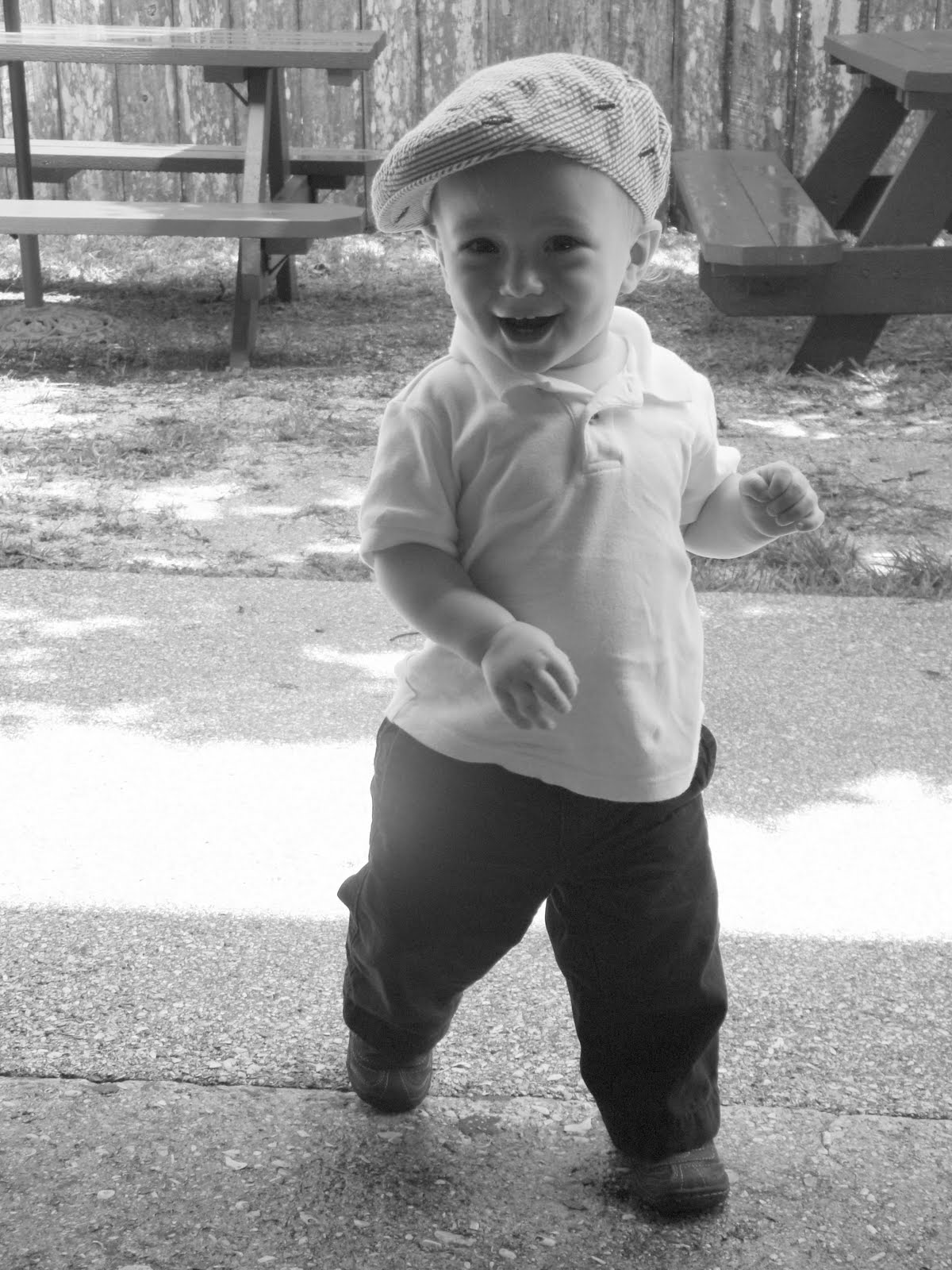 Since we’re broke we obviously weren’t going to do any shopping so Old Town got pretty old pretty quickly…and we still had time to kill before dinner. We decided it’d be fun to go over by the fort and let Kye run wild. Zach and I have SO many fun memories together in St. Augustine and I love going to all the spots where we had our engagement pictures taken, and the fort was one of those treasured spots 🙂 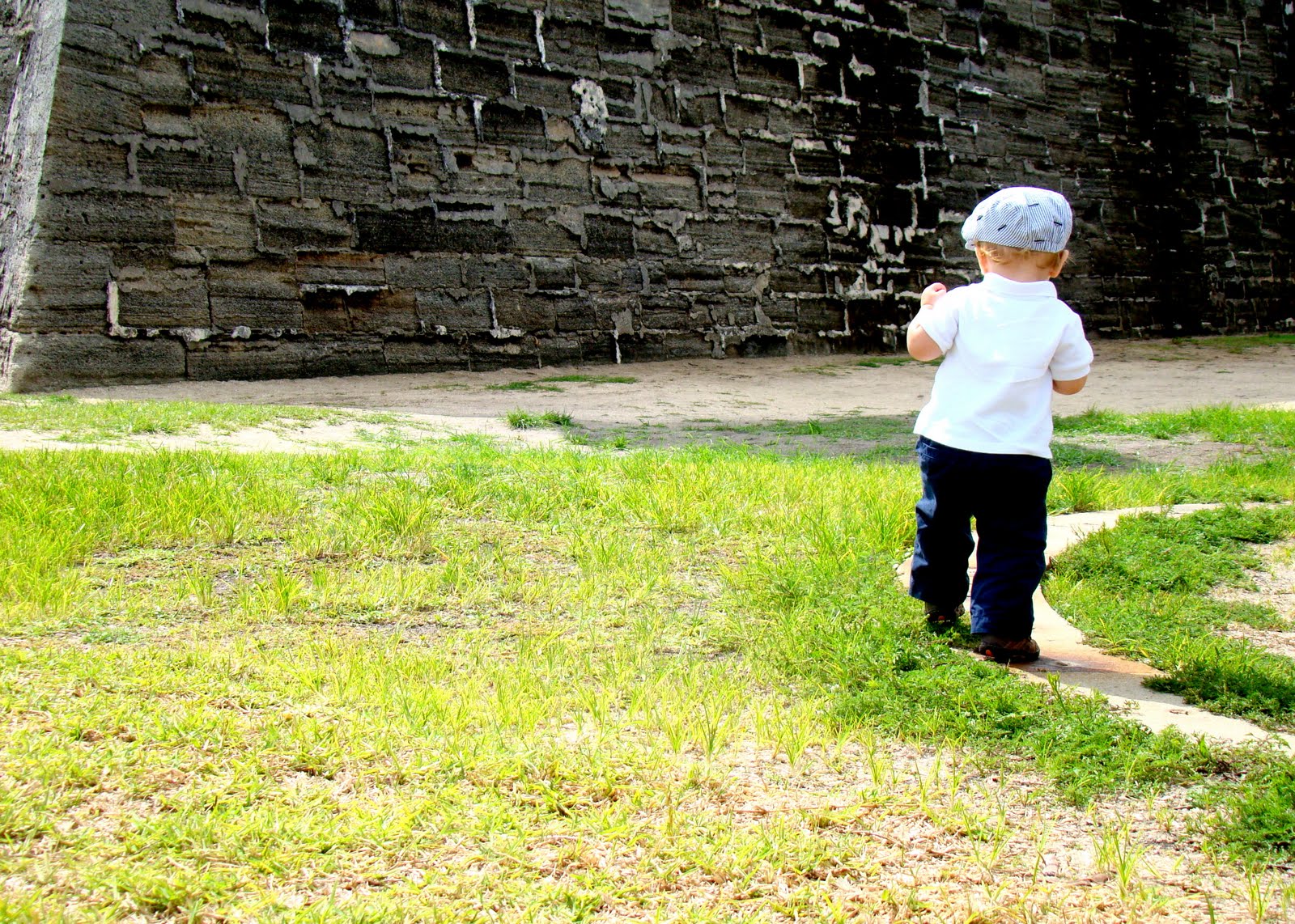 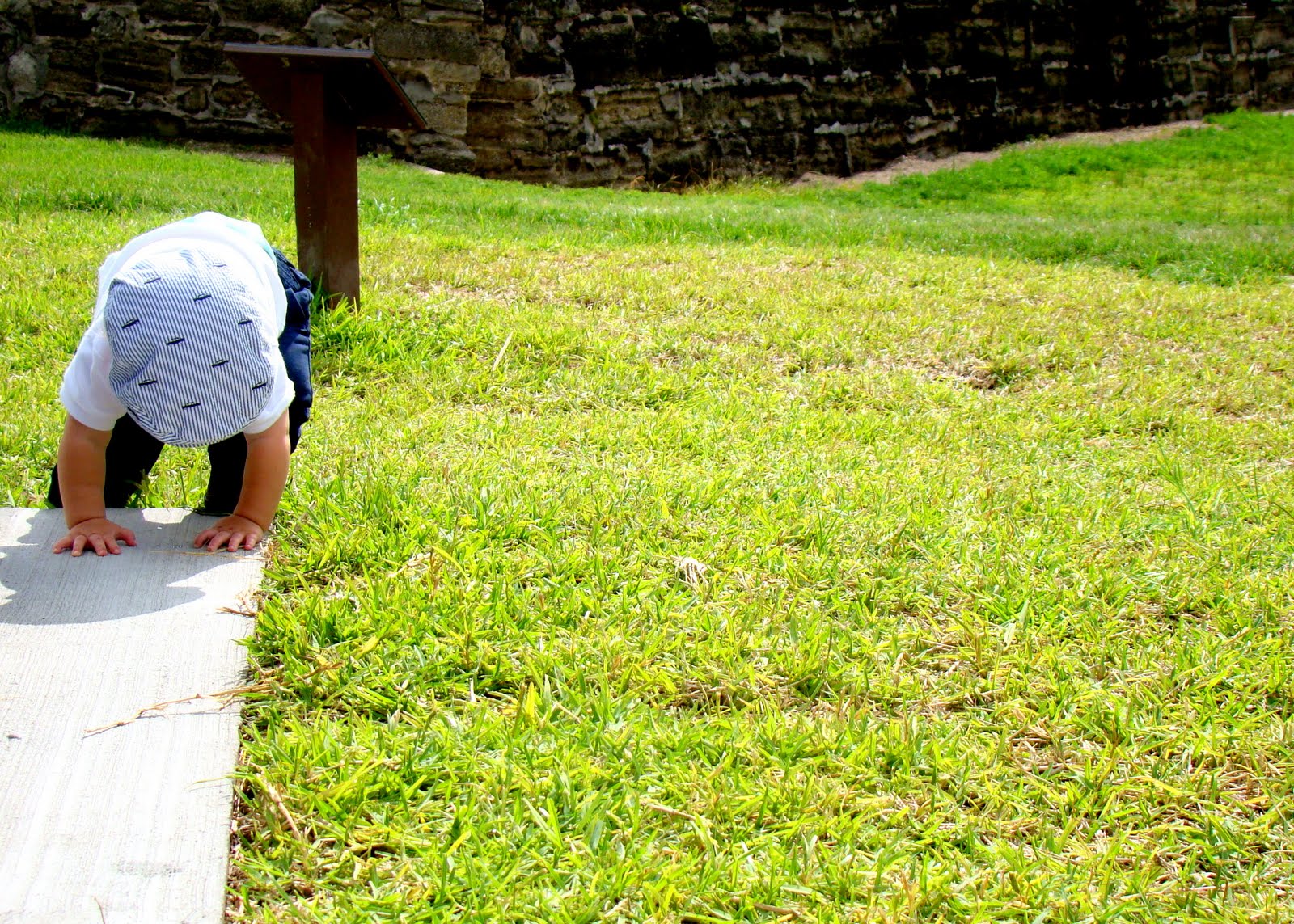 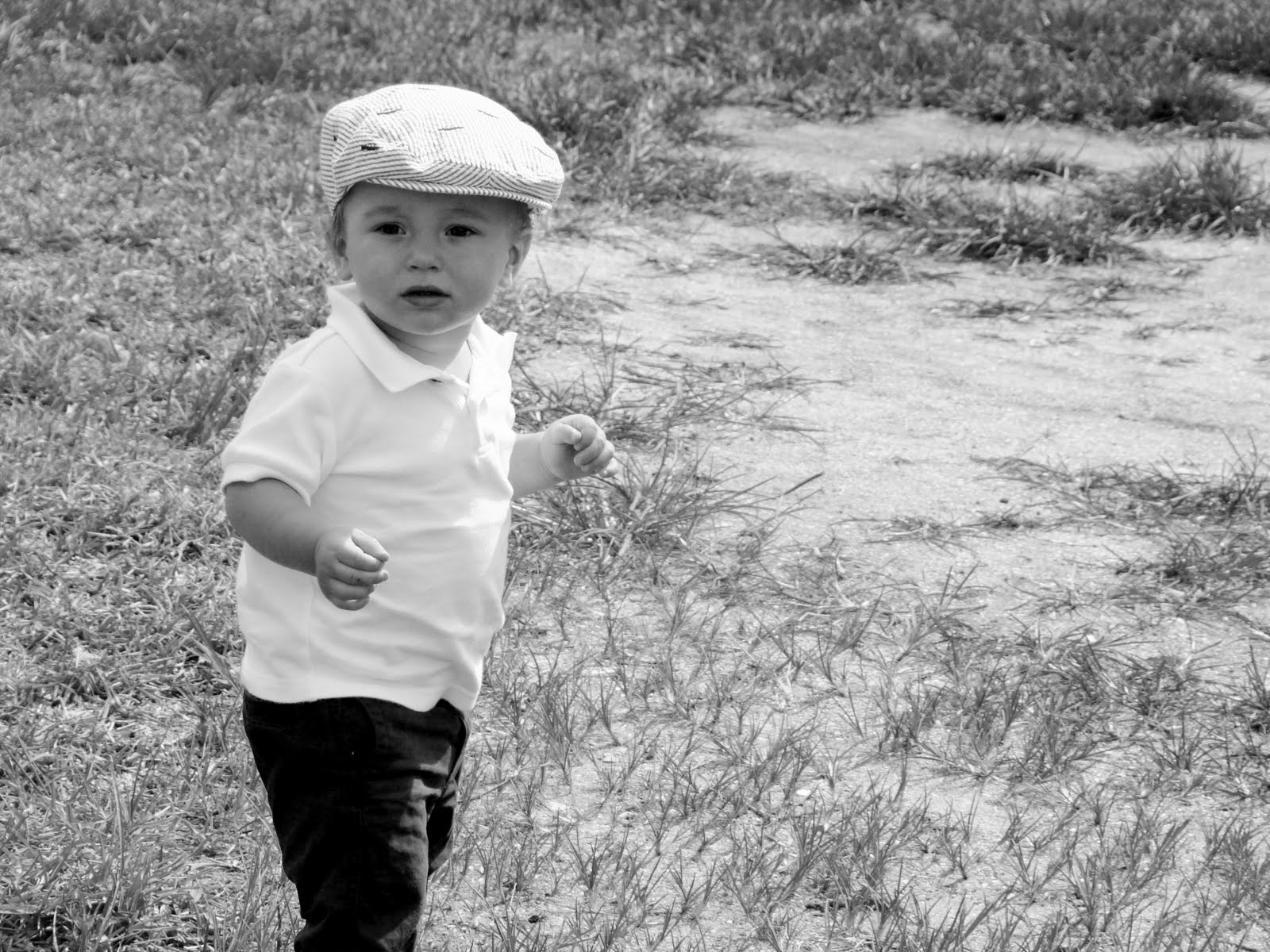 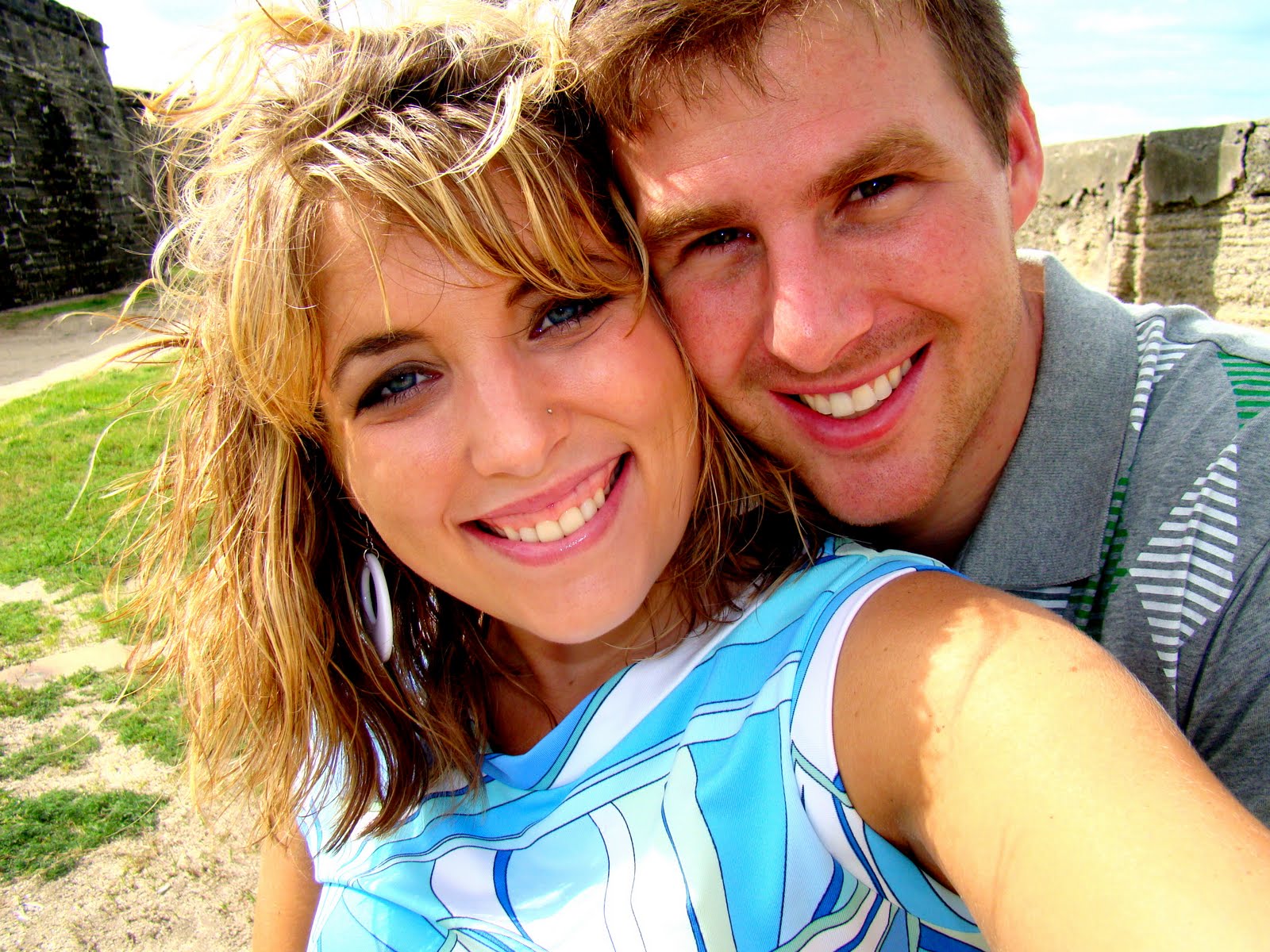 his own cannon shot 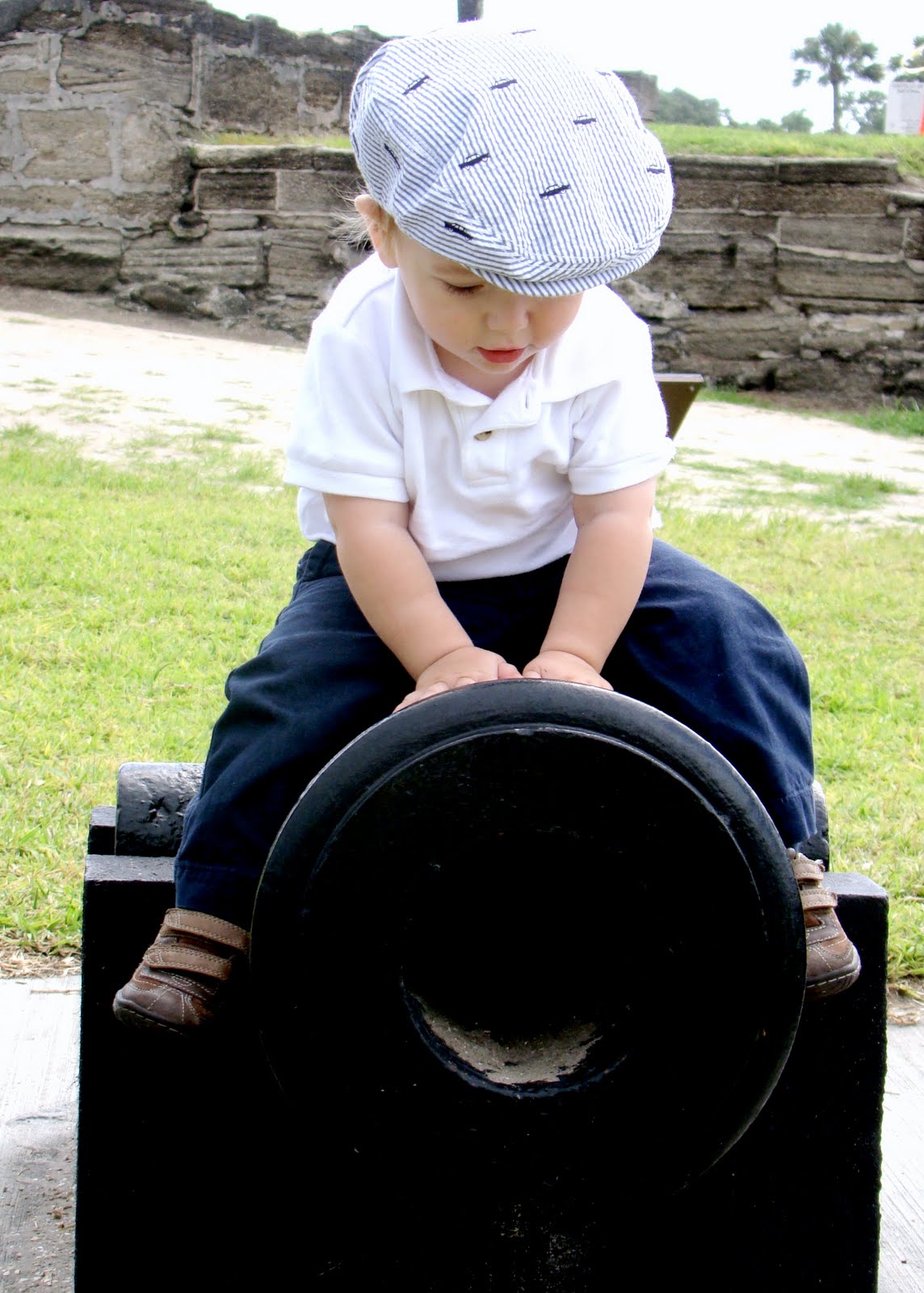 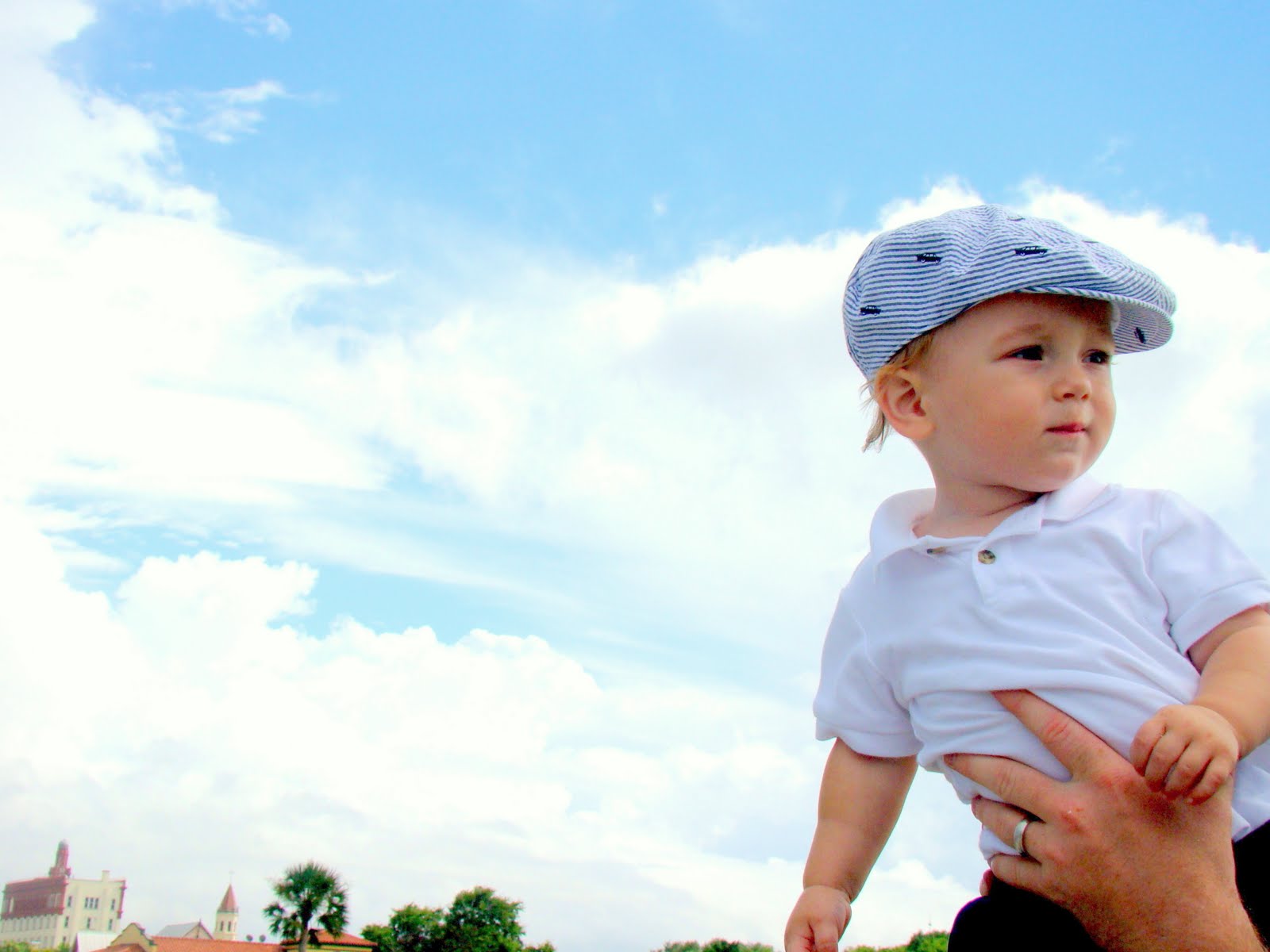 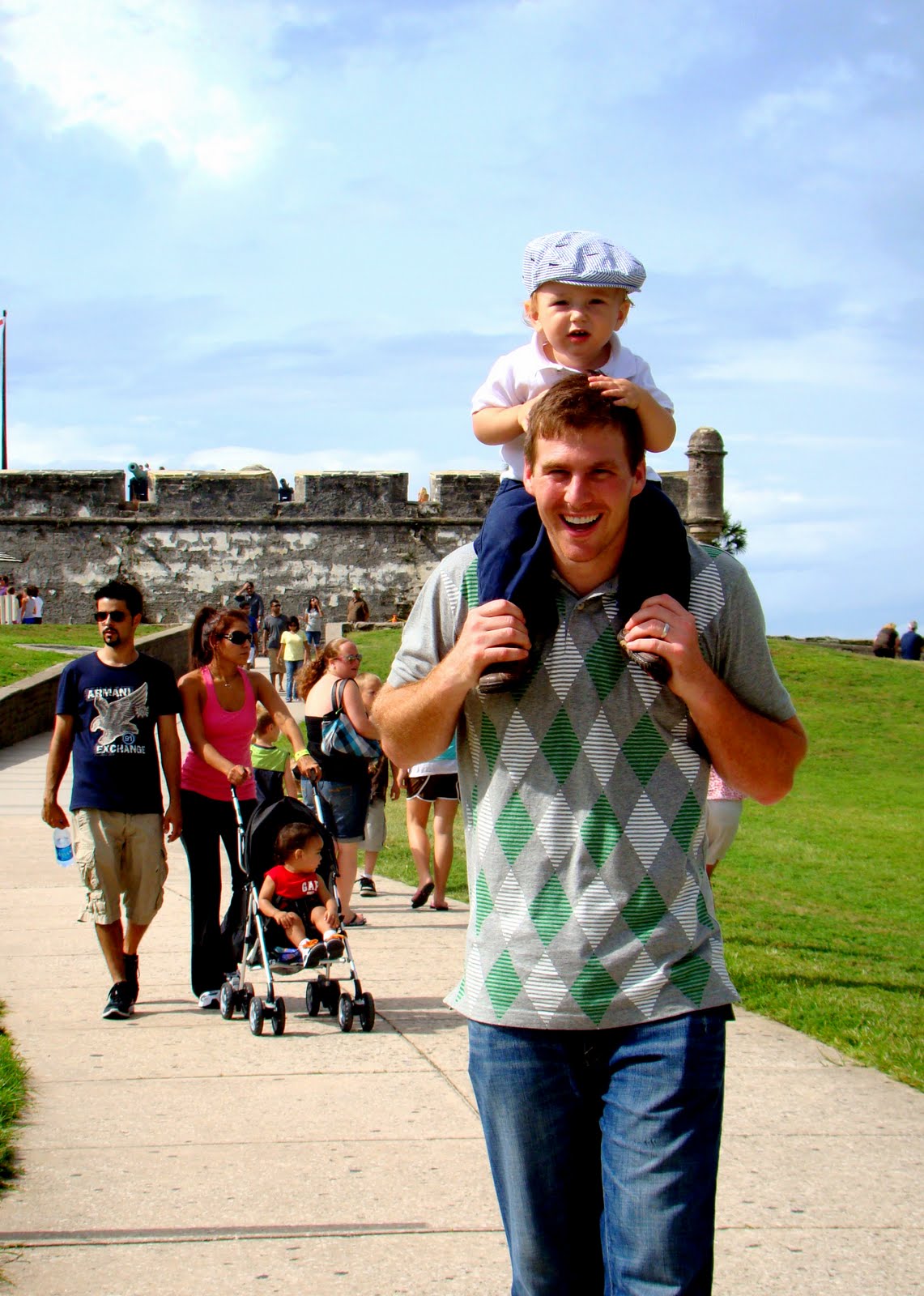 The ONE place we make sure to eat at each visit to St. Augustine is Pizzalley’s. BEST pizza EVER! We were excited to eat there again but even though it was time for Kye to eat…we were still full from our Subway lunch 🙁 We ordered like we usually would though and assumed we’d be hungry by the time the food got there. I also assumed that Kye would be a disaster since he pretty much had no nap all day. I was wrong on both accounts! Kye was an ANGEL and we got so many compliments from the people around us (and they also complimented what a good Daddy he has too!) and he did great! They brought him his own “big boy” cup and straw and he went to town. I hadn’t really given him a straw much before but he knows how to drink out of one for sure! The bread sticks were also a hit and he gnawed on one the whole night. 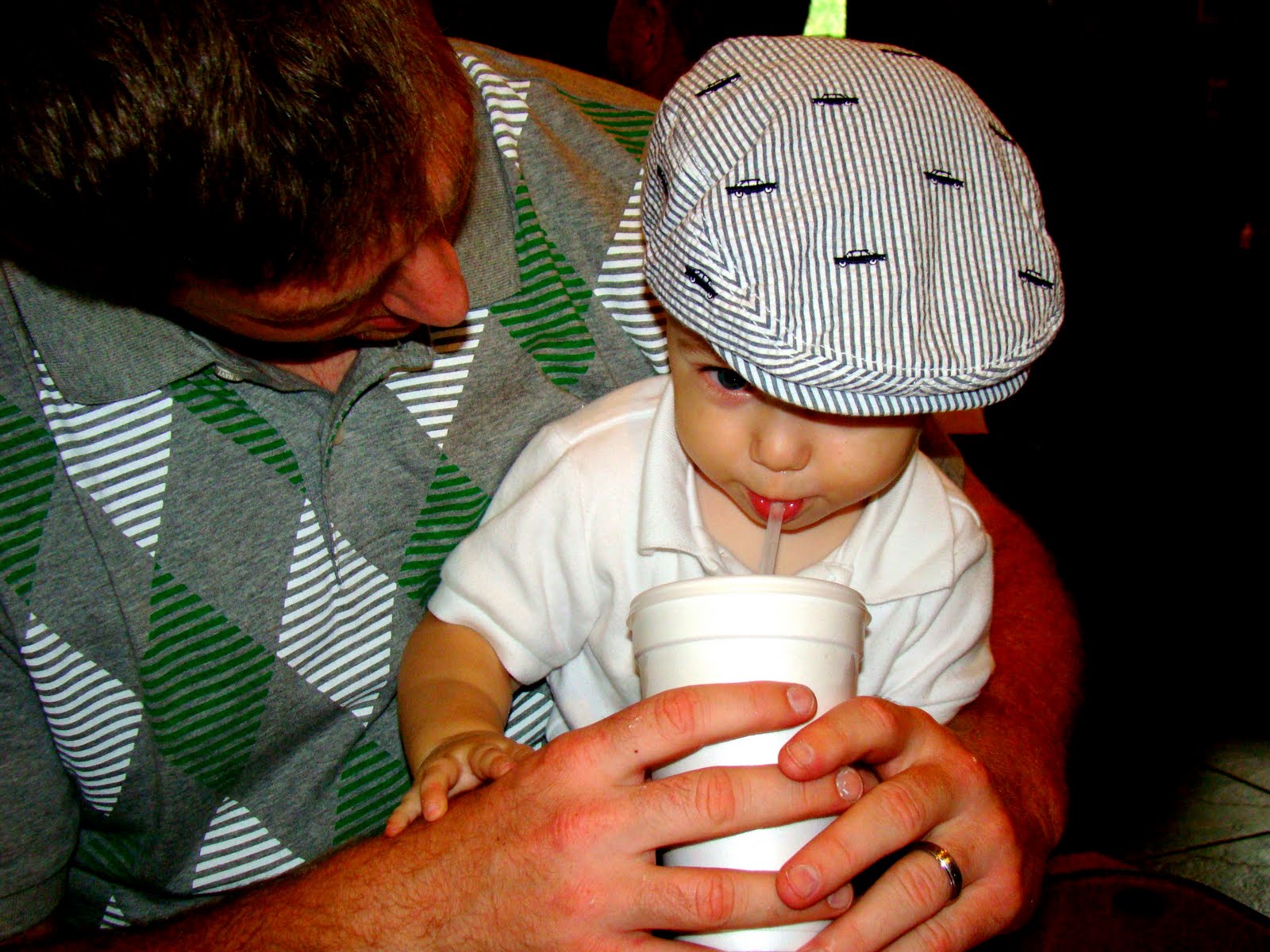 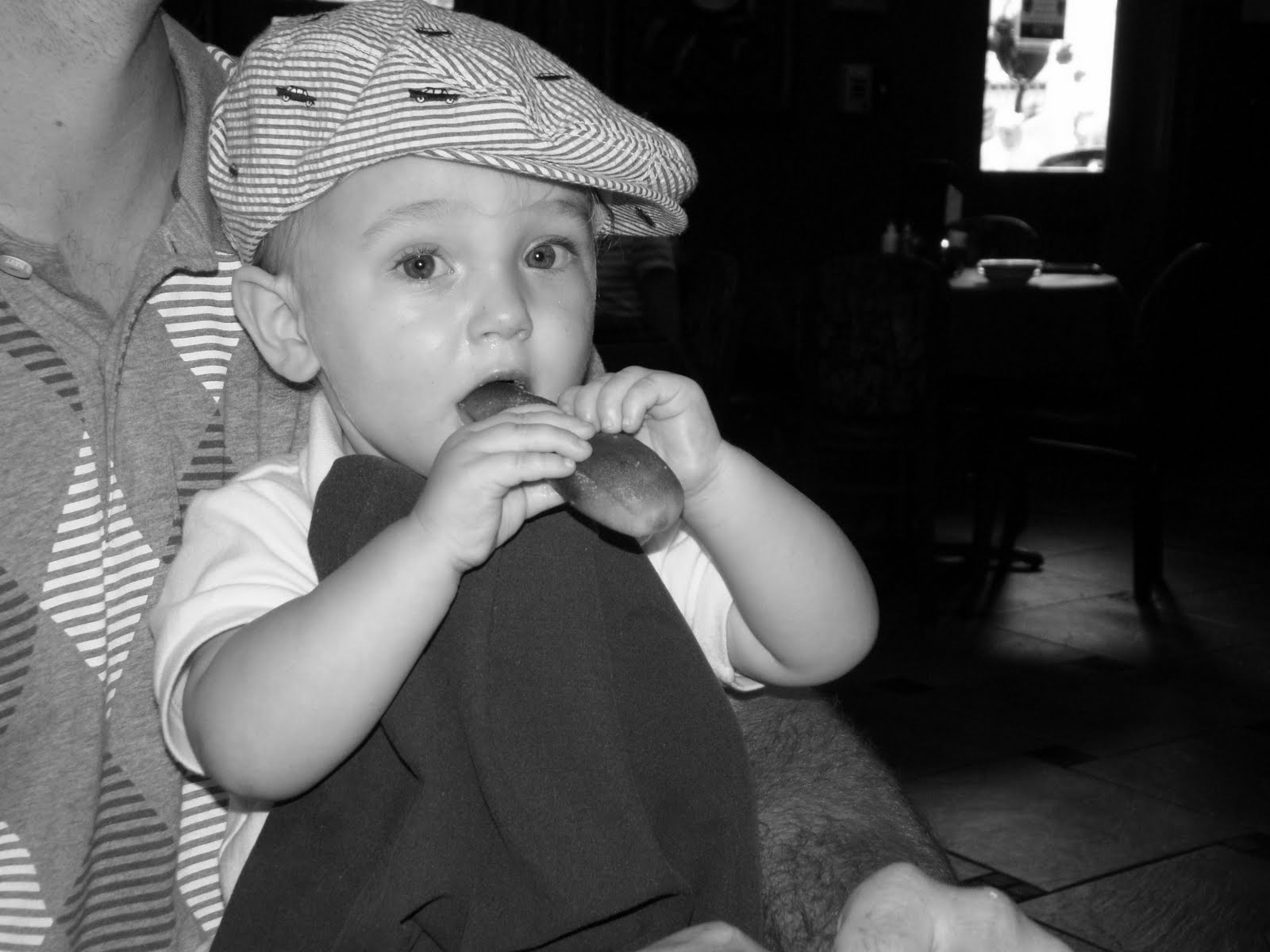 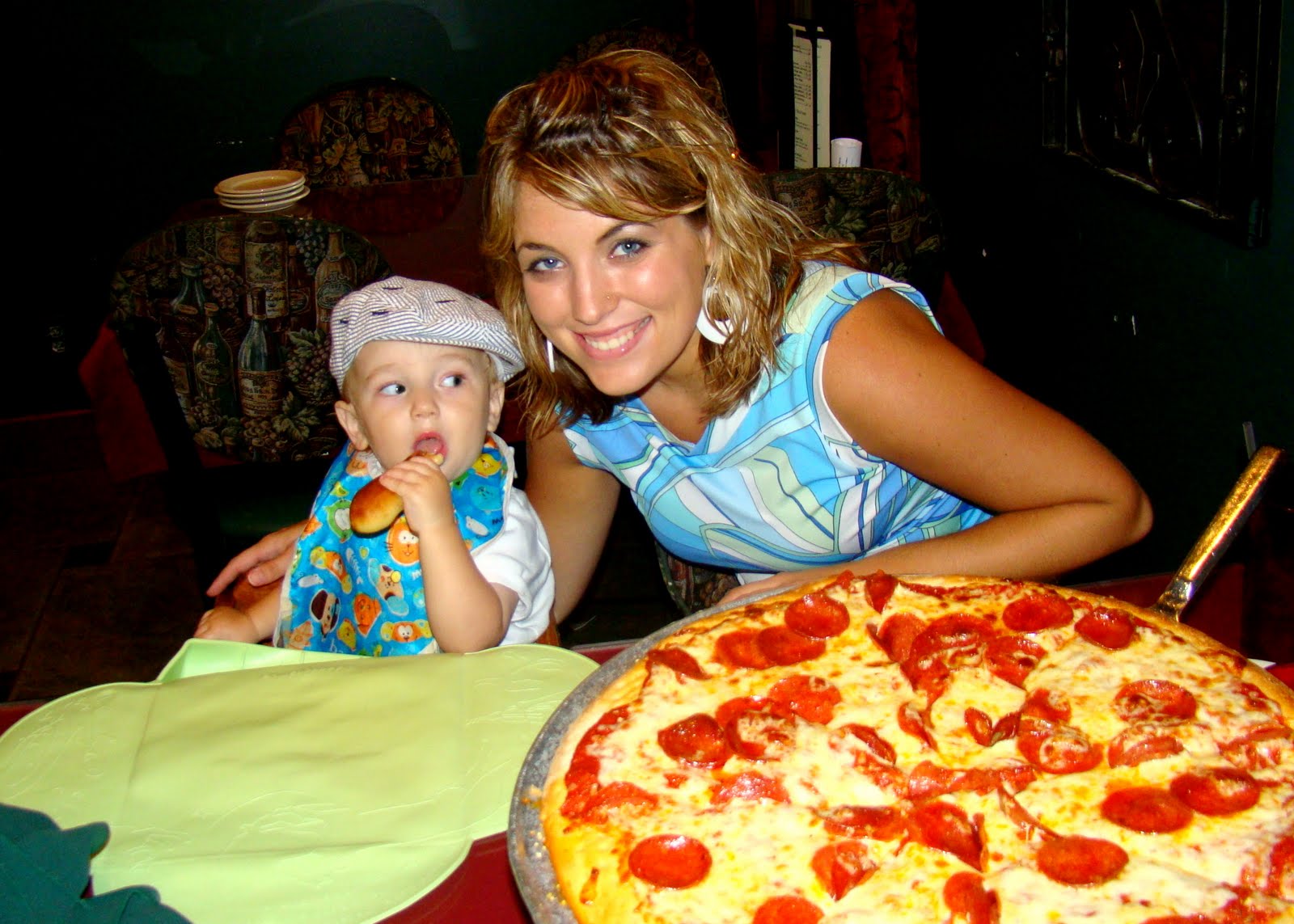 This goes down in the history books for SURE! I didn’t eat a single piece and Zach only had ONE slice (no worries we finished it off for lunches while on the trip)!!! 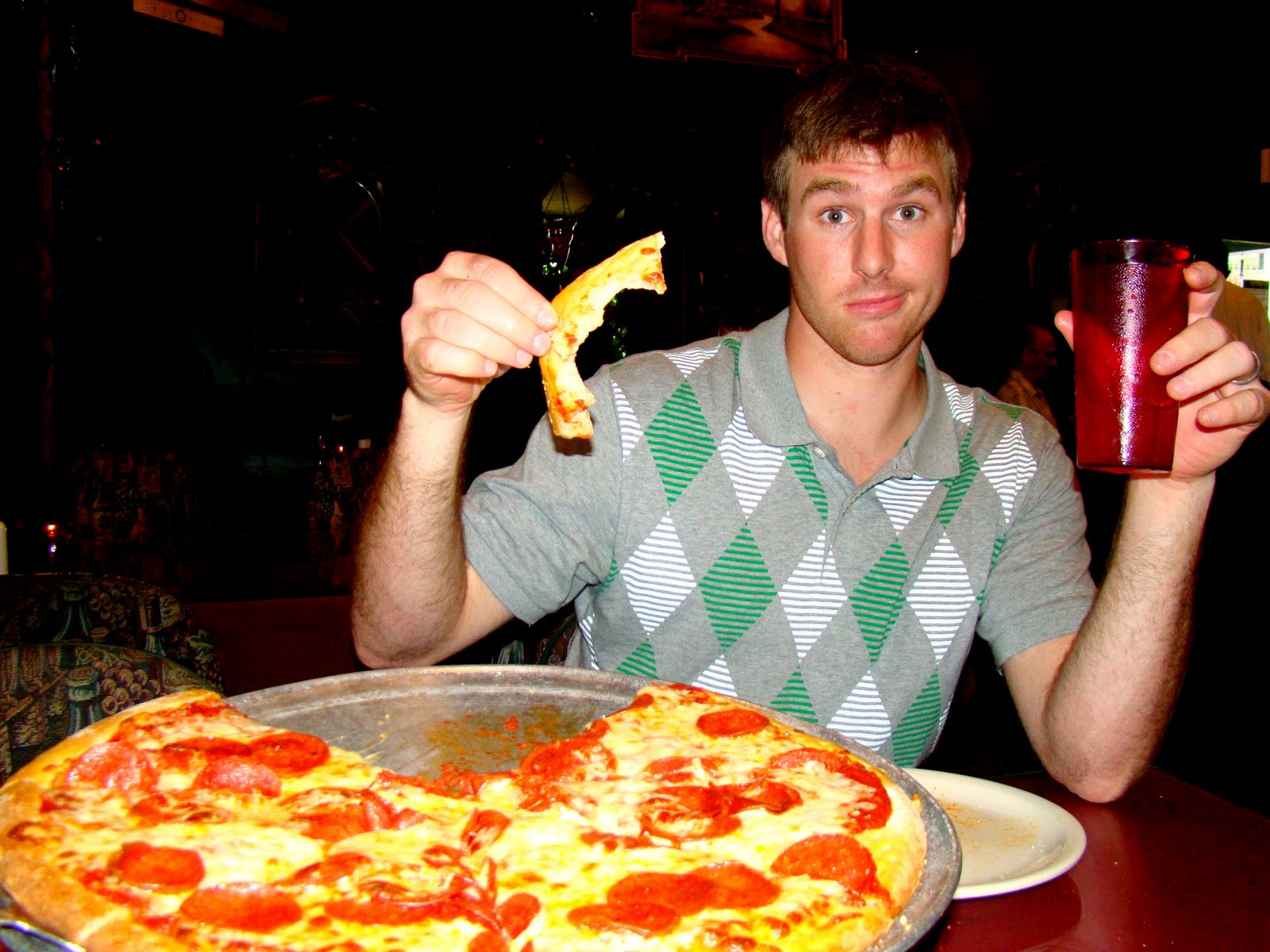 We got done eating earlier than we expected and so we walked down to Kilwin’s for some ice cream. They have the BEST ice cream EVER (and if you know my love of ice cream you know I don’t say that lightly). Since we were on vacation I wanted Kye to get to have some special things. We plan to be strict about rules at home but we both agree that vacations are about FUN and some of that fun is getting to “break” rules. Growing up, for example, we were NEVER allowed to jump on beds at home but we could at hotels. It always made vacations extra fun knowing that we’d get to jump on the beds haha. I guess our thing is getting to get special desserts because each night we got ice cream together as a family. I think Kye gets his hunger for some ice cream from his Mama…what do you think? Here’s a video of him chowing down. 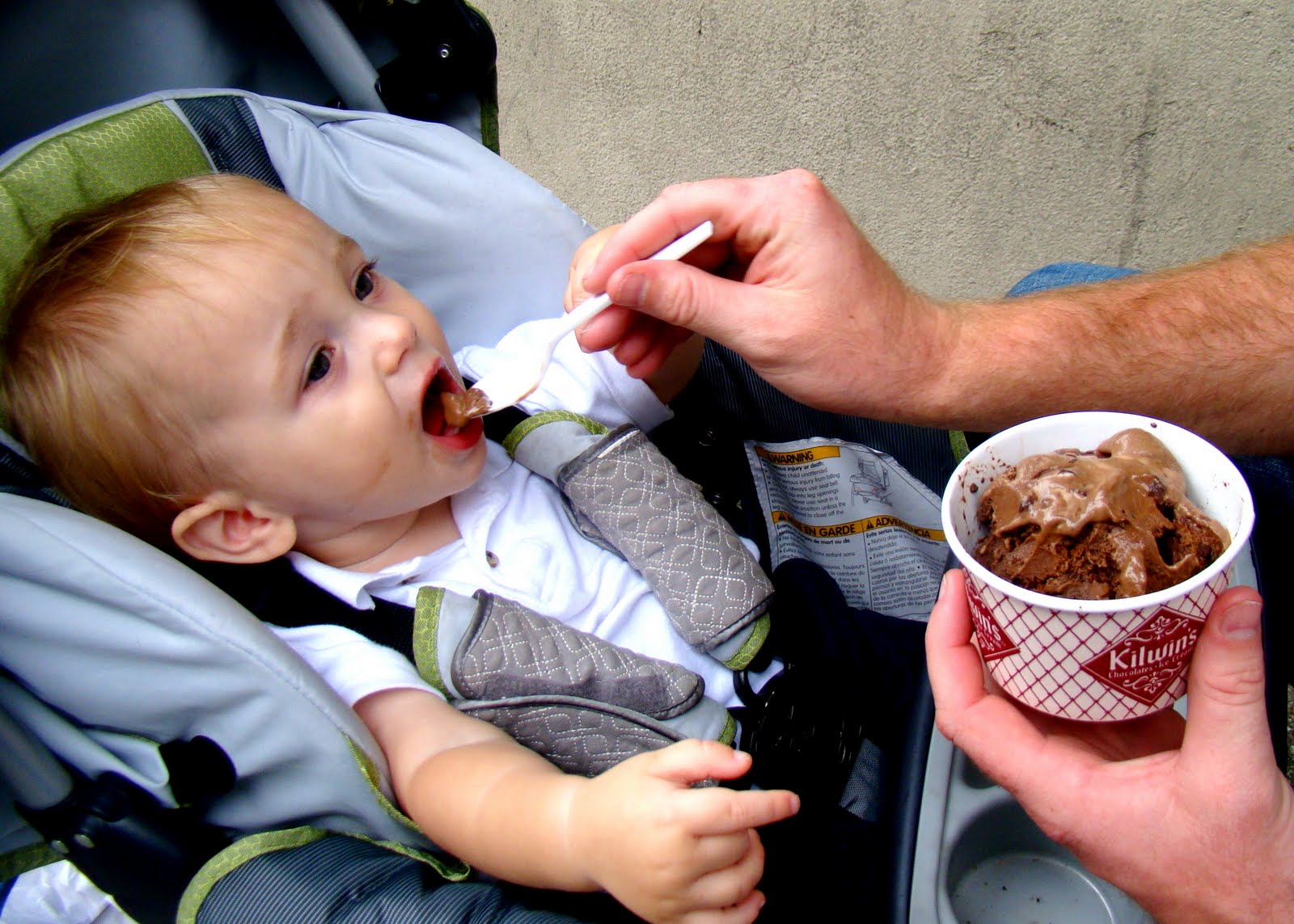 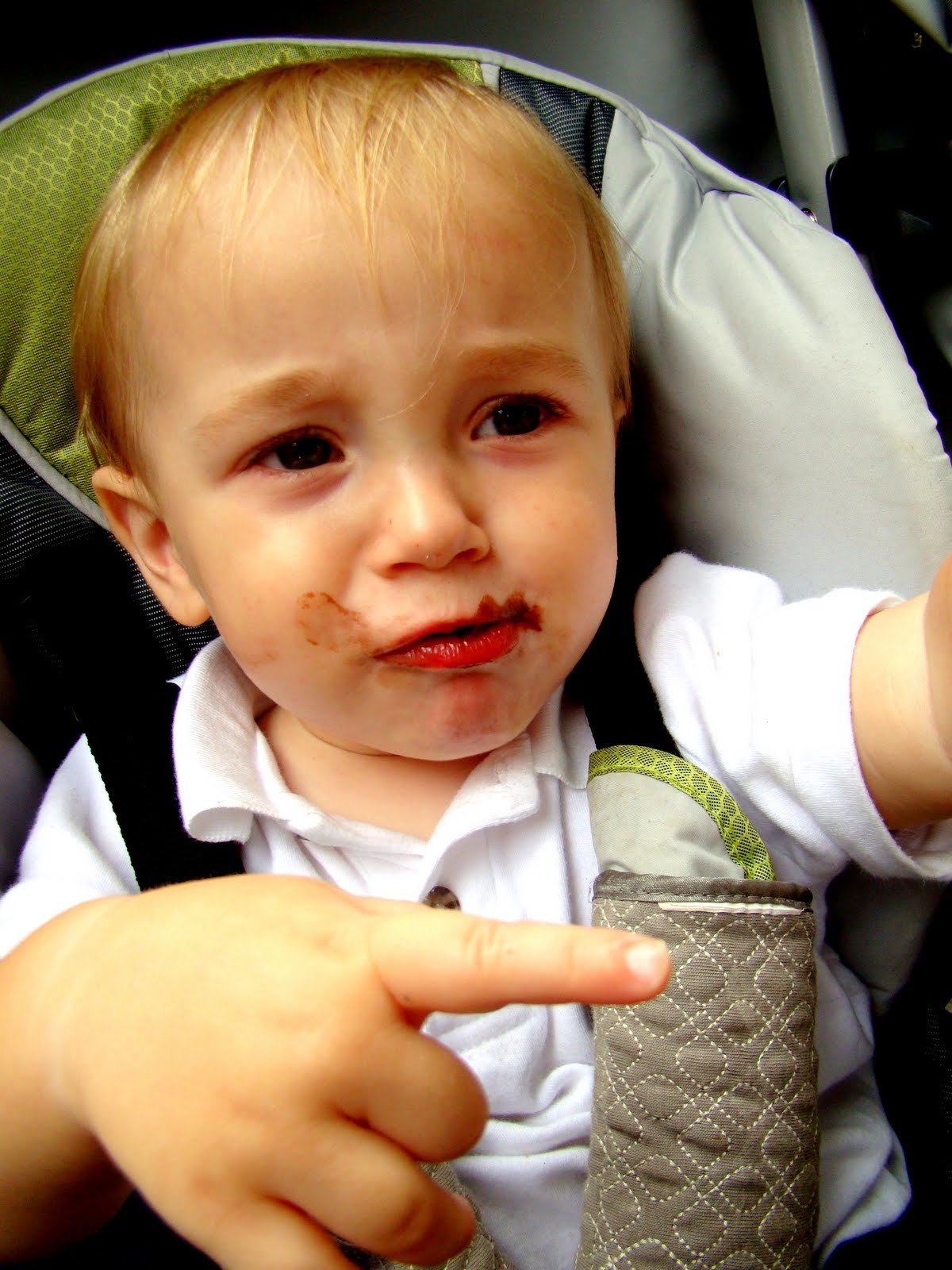 After our fun day none of us wanted it to end (although we ALL needed the sleep!). We had fun in the hotel room playing before bed time and Kye enjoyed getting to play with the phone from the room. We never allow him to play with our home phones or cell phones but this hotel room phone was so old school it looks nothing like anything he’s ever seen. Here’s a video of him talking on the phone. While he was playing (naked from his bath) we were unpacking from the day and I noticed a HUGE turd on the floor. Both of us assumed it was one of the dogs. They don’t have accidents often but we were in a new place and they’d been in their crates for awhile. But neither of them acted guilty (and they always act guilty!) and I looked at it closer and even said “it looks human.” It seriously took us several minutes to put the blame on our child! Zach said “check Kye’s butt” and I did and BAM poop leftovers. My child pooped on the floor!!! It was hilarious and especially funny that it took us so long to realize it haha We put a diaper on him pronto 😉 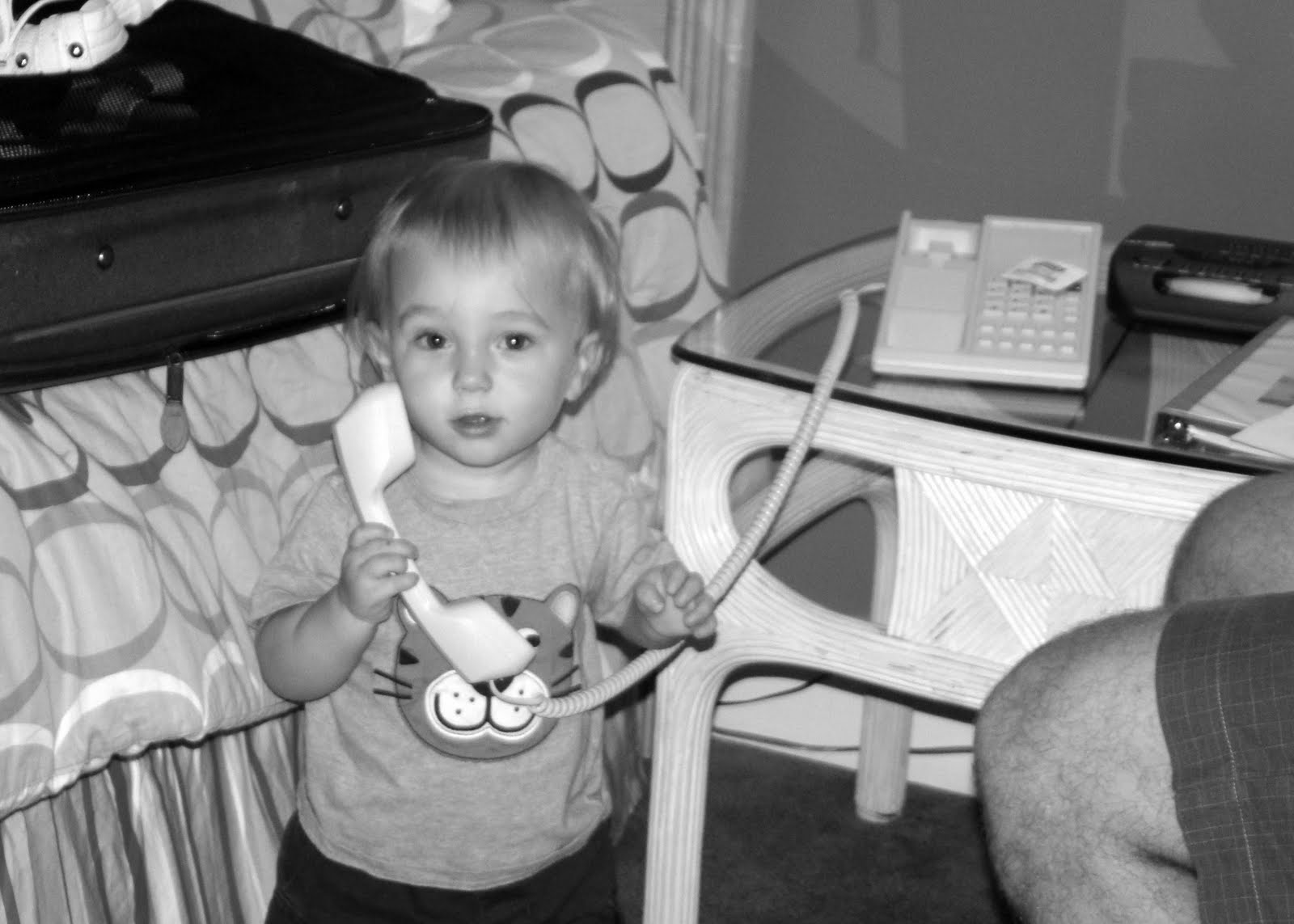