Since Mr. Kye is officially 6 months old it’s time to start him on the sippy cup! I read up about it on the Babywise Blog and decided to start it right when he wakes up from his catnap at about 5:30. It’s the hardest awake time because he goes to sleep at 4:45ish wakes up at 5:30, doesn’t eat until 7 then doesn’t go back to sleep until 8! I thought that the “snack” of the sippy cup then would be helpful to hold him over.

I bought Nuby cups as Robyn told me they have the soft nipple to help with his nose and so it wouldn’t hurt when he bit down on it. I was interested to see how it’d go as it was a lot of firsts thrown at him at once. First time in his high chair not during a feeding time, first time with the sippy cup, first time “feeding” himself anything, and his first time EVER having water!!! I didn’t want to do milk because I didn’t want to waste my precious breast milk and I didn’t want it to be too much of a snack where he wouldn’t be hungry at 7. 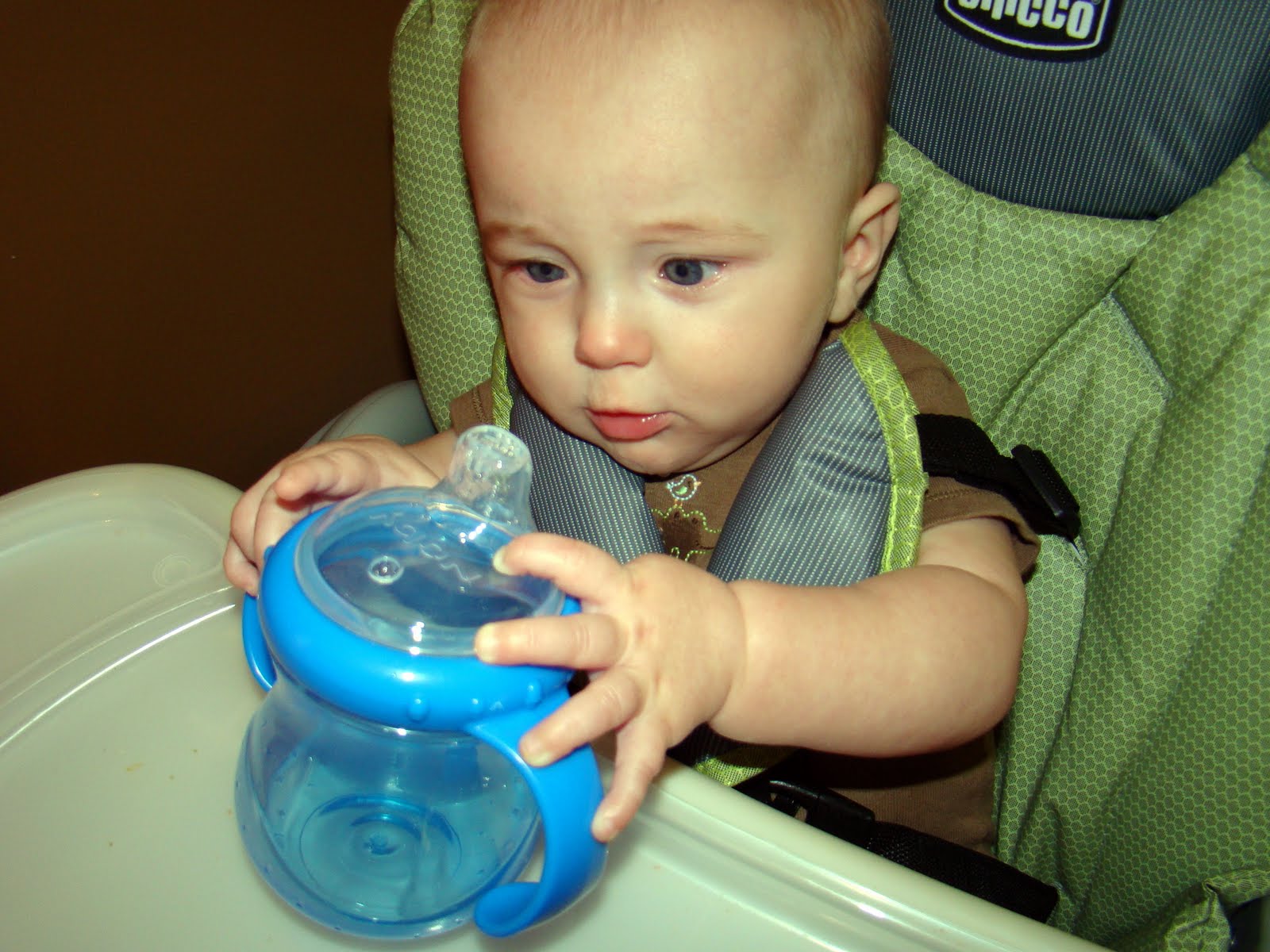 Figured out how it works pretty quickly! 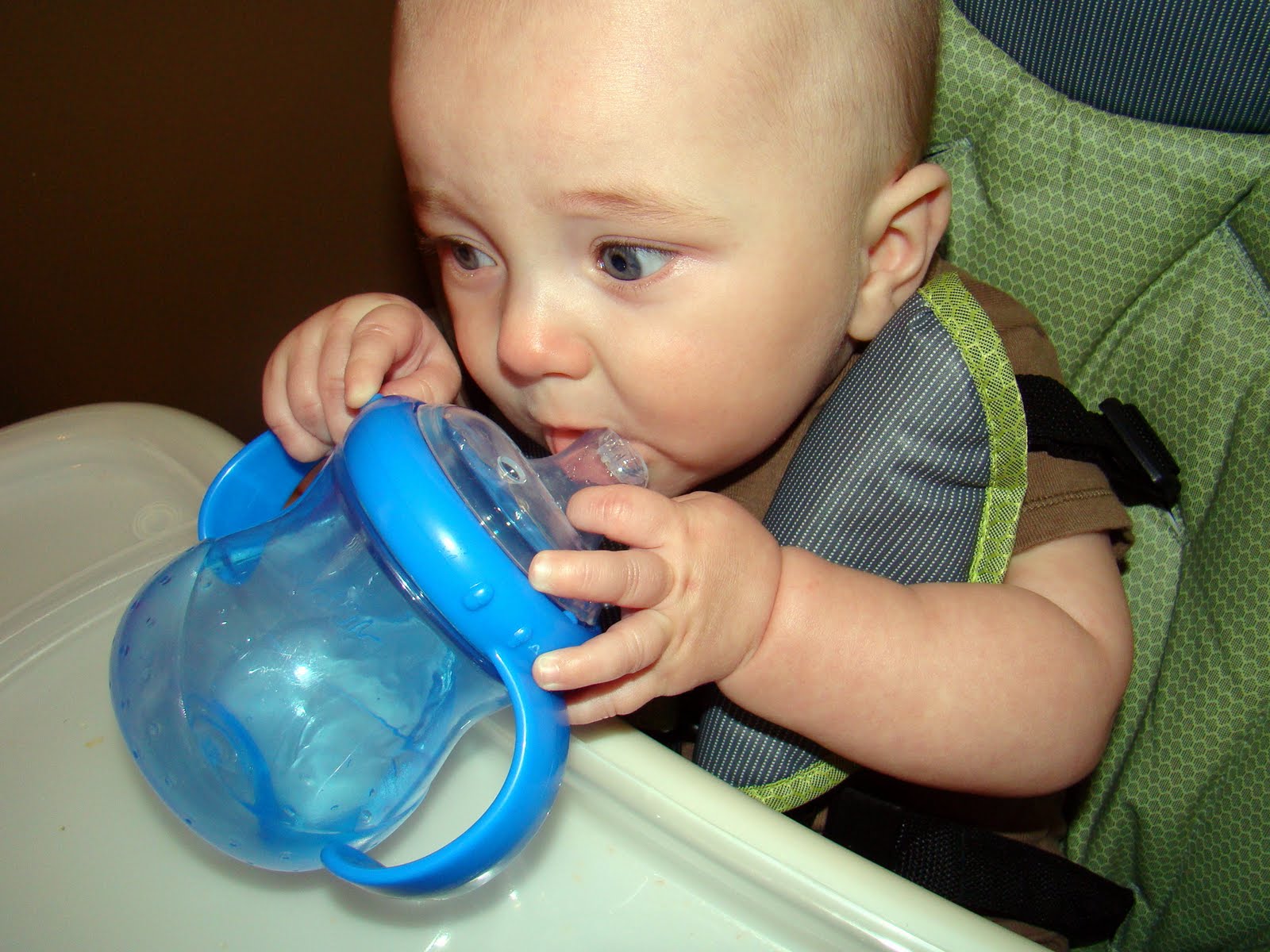 Going for the mouth 🙂 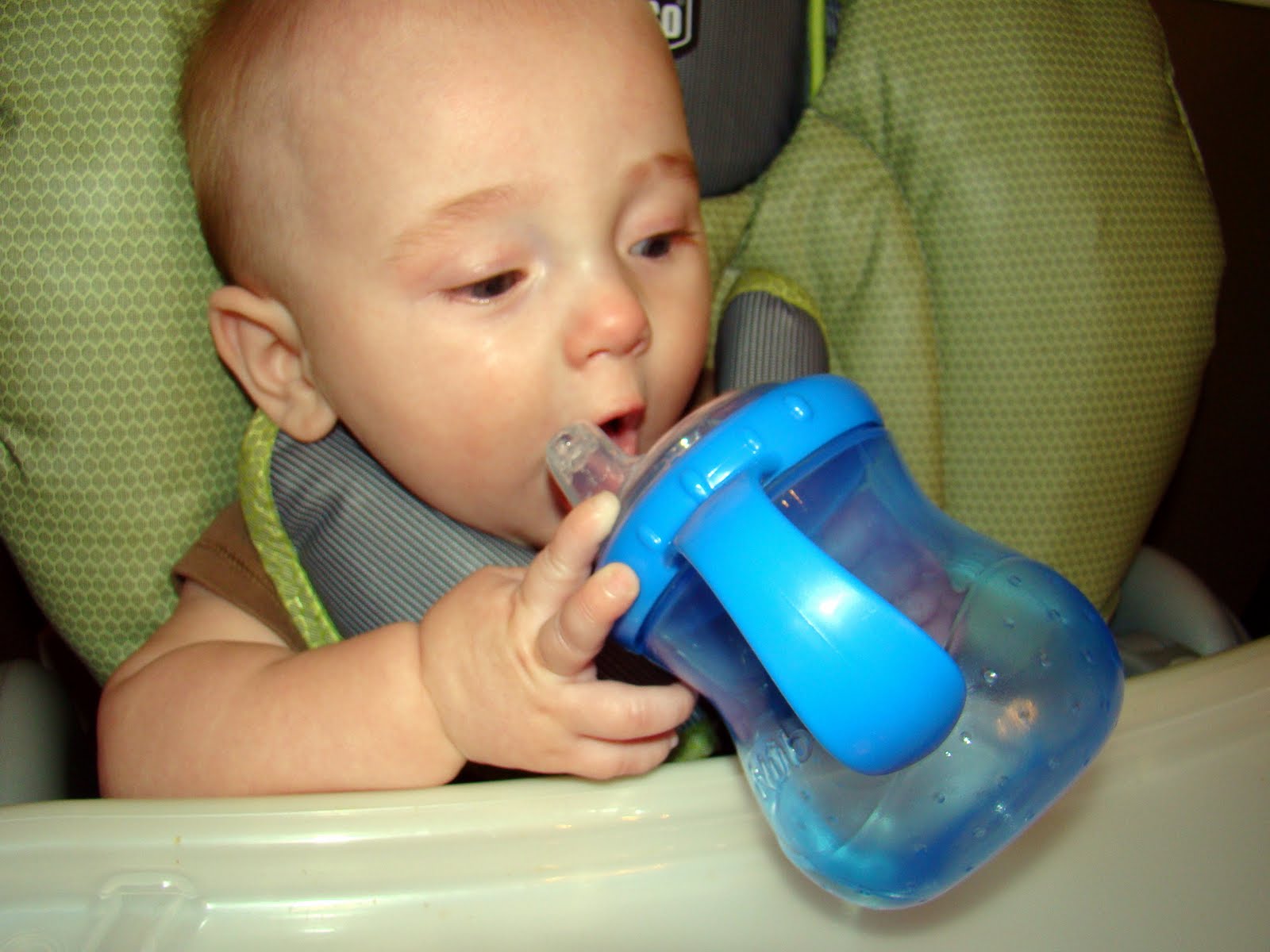 I had to help him. I realized that I did a dumb thing and bought a 10 oz cup thinking it’d have enough room once he drinks his bottle (when I pump) from it but not thinking that it may be too big and therefore he’d have to tilt his head WAY back to get the little bit of water I put in it! Oops. 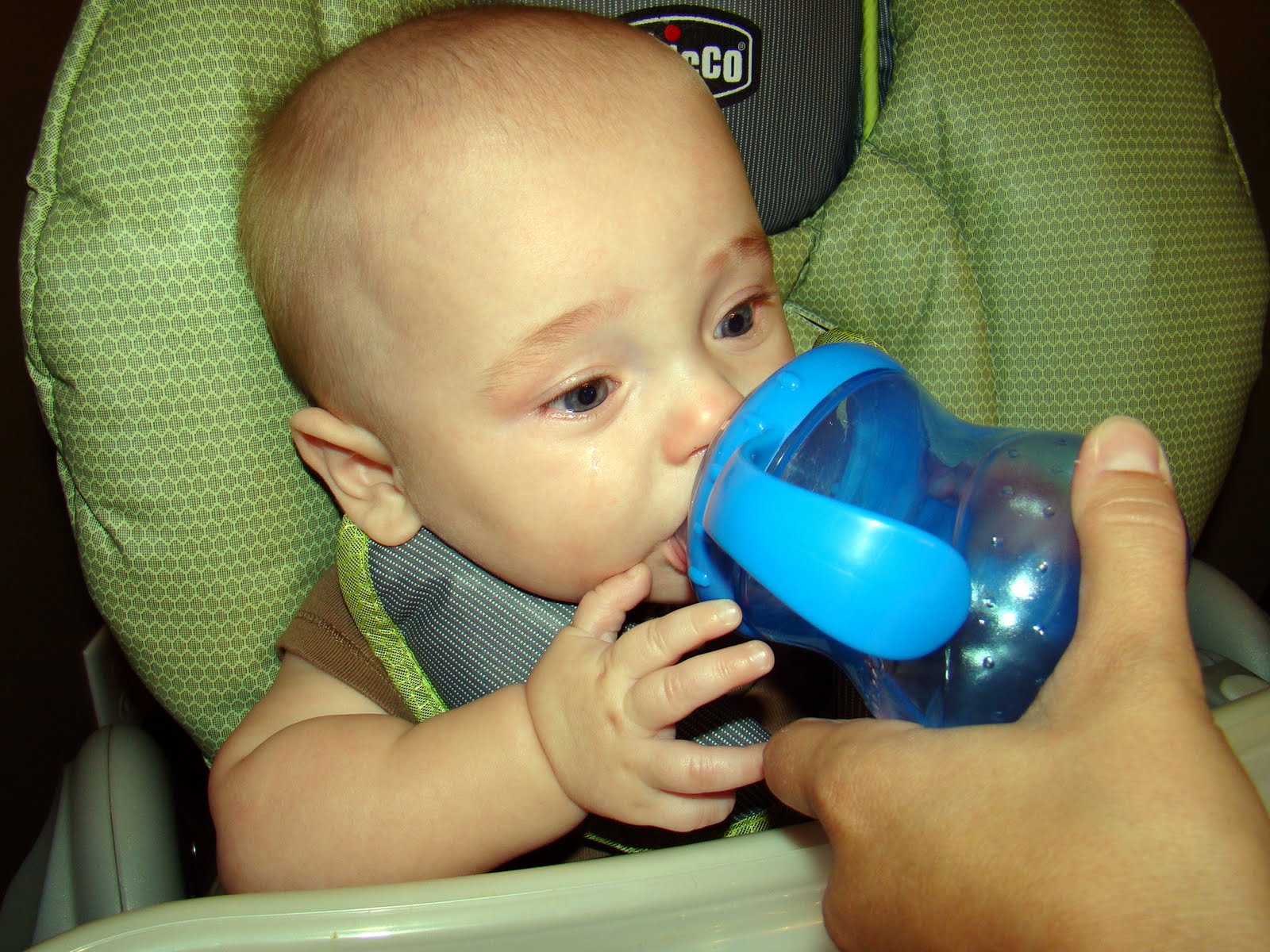 First taste of a liquid other than Mommy’s milk 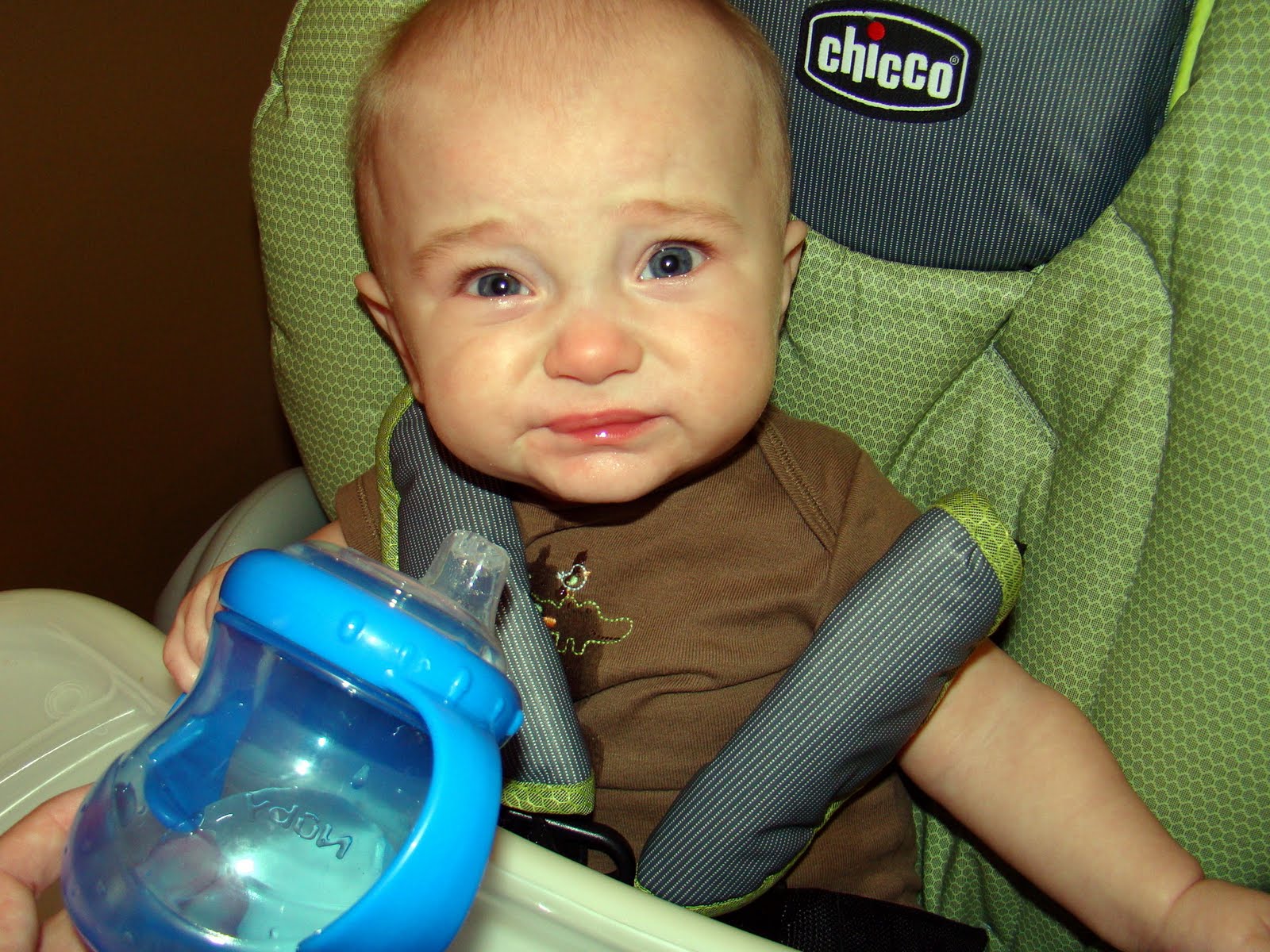 The end result was one SOAKED kid!!! The cup didn’t leak, my baby did! He didn’t swallow it down very well haha 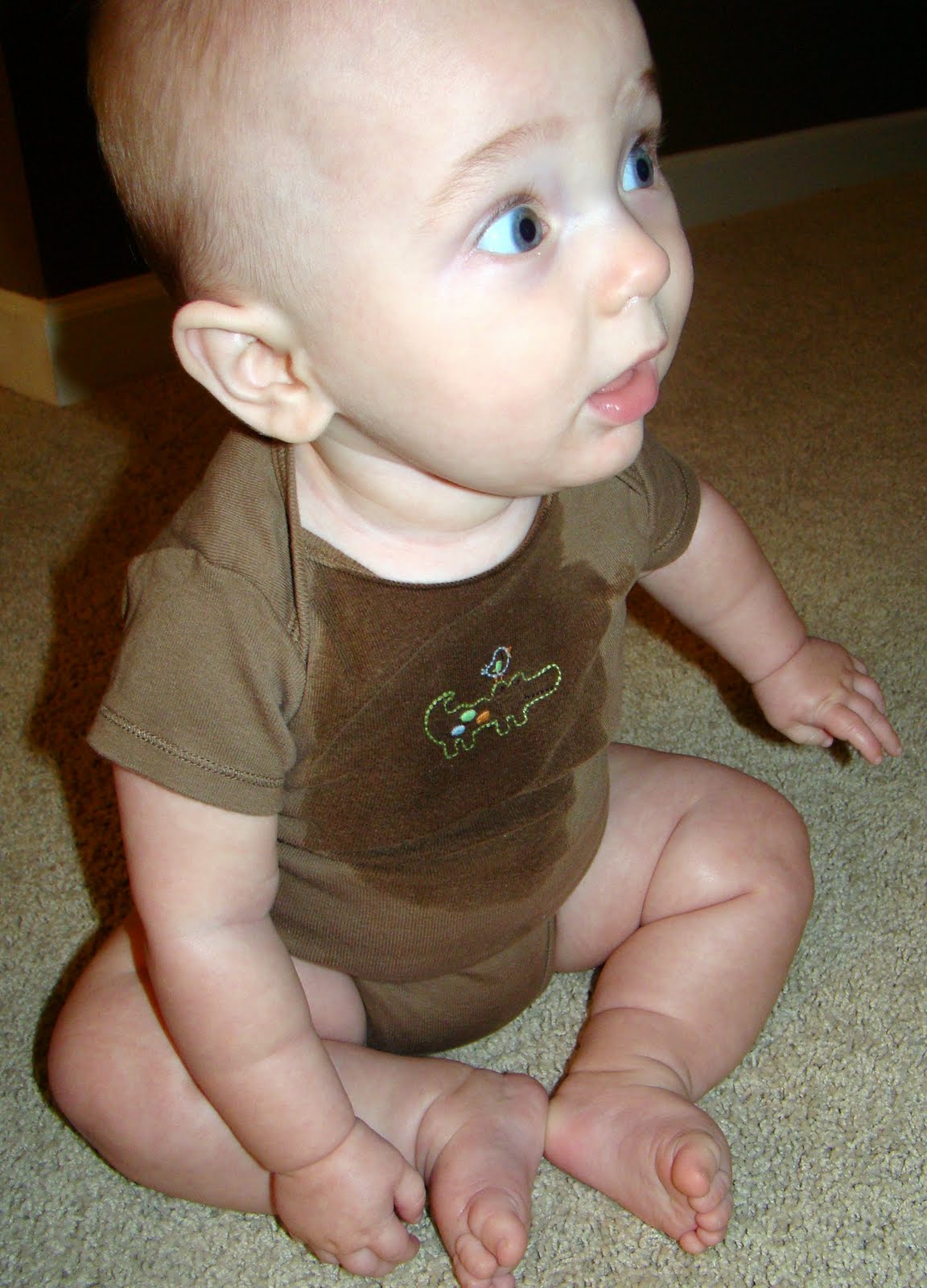 The next day I decided to try it in the Bumbo seat instead. I feel like the high chair confused him and it’s SO big that I thought he’d be able to focus better in the Bumbo. And this time I put on a bib 🙂 He really gets excited to see the cup and likes holding it and putting it in his mouth. He’s not so crazy about the water though. I think he’ll get used to it. I know the ultimate goal is for him to drink milk out of it anyway so once he adjusts to drinking from it I plan to go ahead and start using it the times I pump. The Babywise Blog says to put a couple ounces in it then do the rest from a bottle so he’ll slowly adjust. I plan to do that but typically when I give him a bottle we’re out and about and I feel like I should do that at home first so I’ll probably wait until Zach is here and I can pump for the missed feeding. 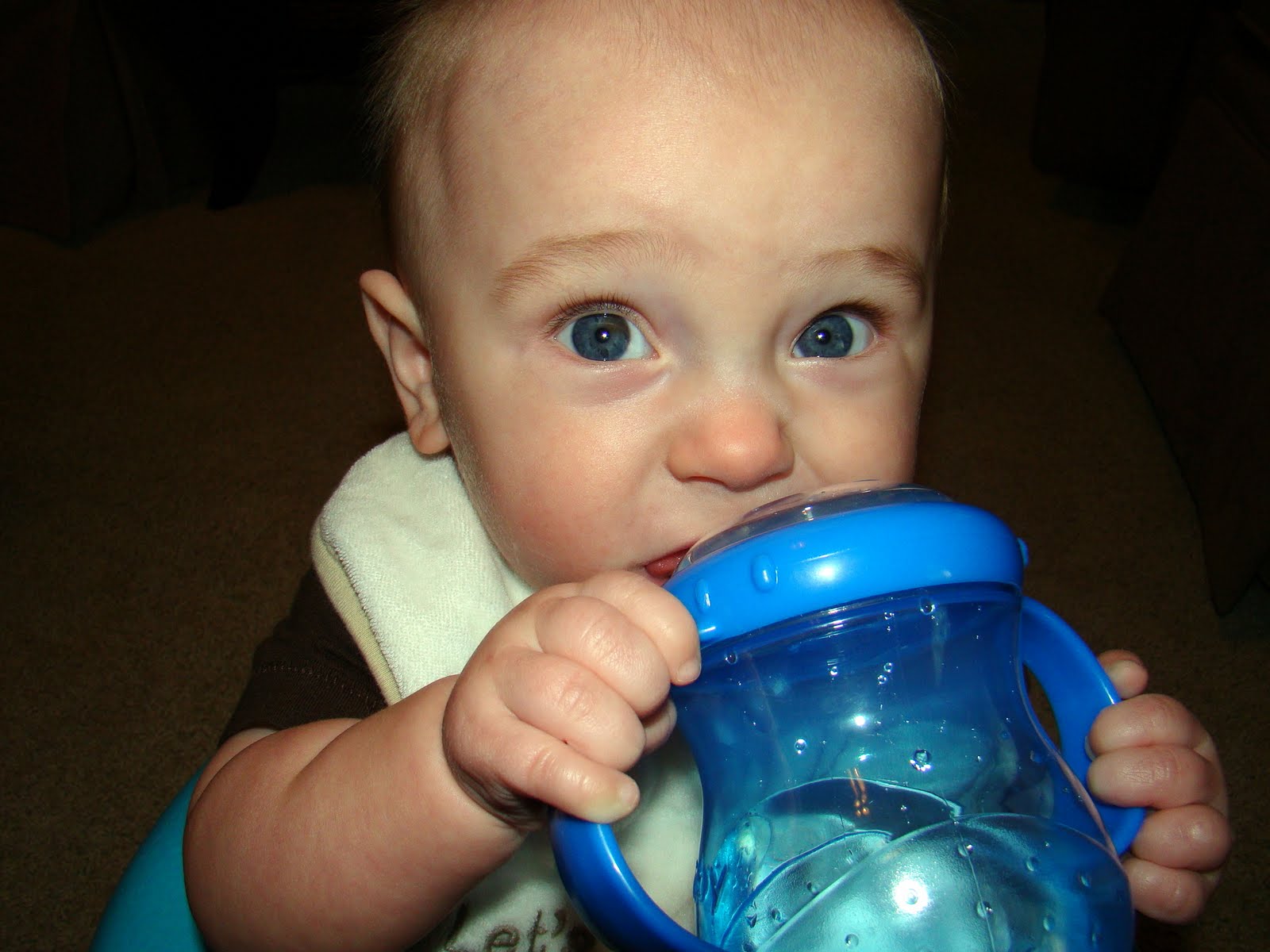 I also changed when I give him the sippy. I re-read some of Babywise II and it talks about how snacking shouldn’t be an everyday thing and that we don’t want to start a “schedule” where the baby is eating more than 3 times a day! Makes so much sense. So I started giving him the Sippy right after his 3:00 feeding. It’s the only feeding of the day where he doesn’t get solids so it’s a good time to do it. It’s also the time we typically leave to go out of town so we can always do the sippy in the car if needed. 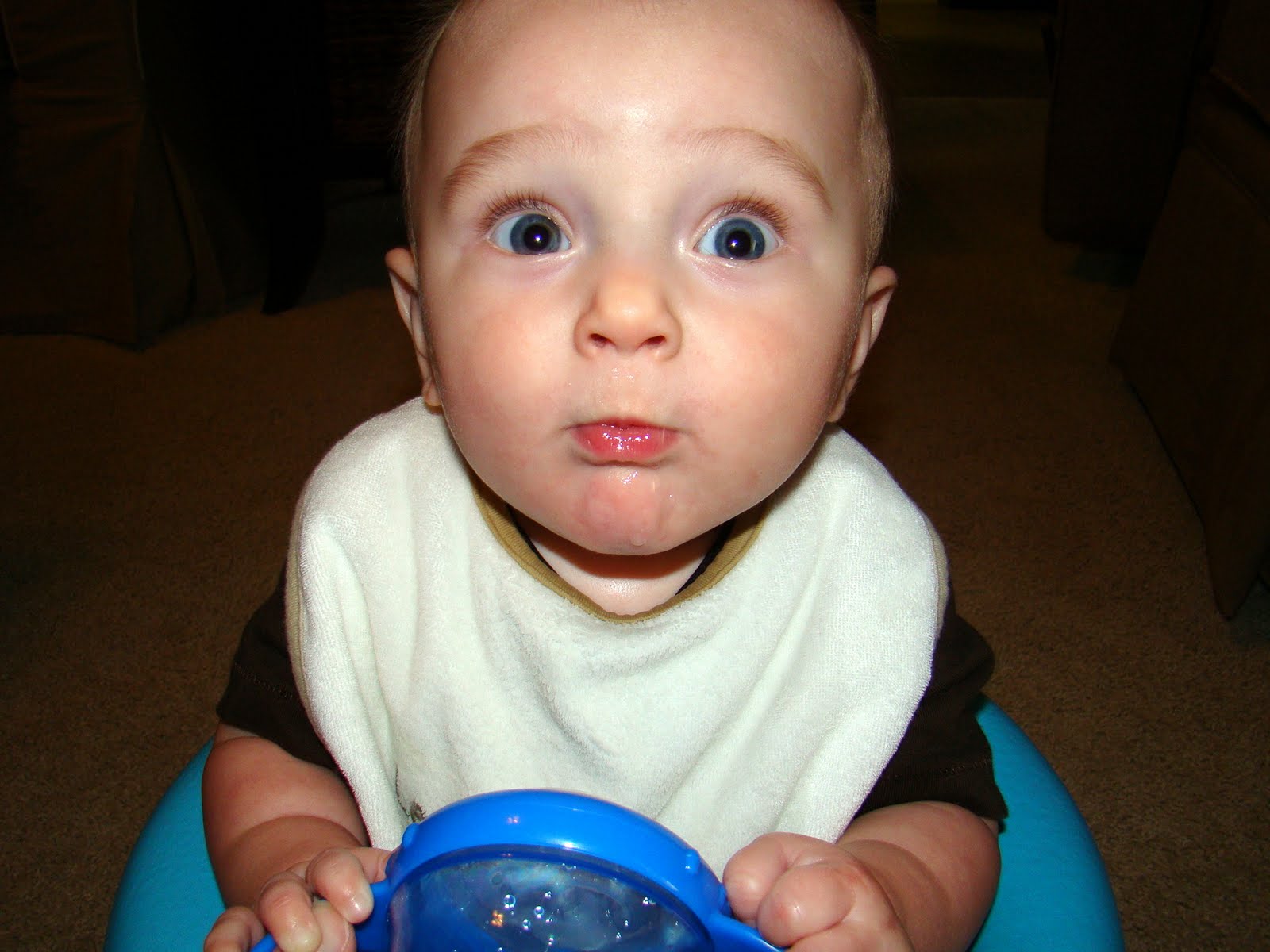 He’s really starting to get the hang of it and enjoys the water a little more each day! I know I could put juice in it but I feel like water is so good overall for life why give him juice? I know I’ll eventually do juice but I don’t see ANY benefits of it this young.

Zach went tonight to Walmart and got him the same Nuby sippy but that holds 7 oz instead of 10. I’m hoping it’ll help make it easier for him to tilt it and drink it but I did realize something else today. He ALWAYS drinks laying DOWN! So on top of all the other firsts I’m also expecting the kid to figure out how to drink sitting up! Today I laid him on the Boppy so his head was elevated some but that he was in a more comfortable position. I think it helped, he had a bad teething day so it’s hard to tell, but I think it’s how I’ll do it for awhile to help him adjust. It’ll be an awesome day when we say goodbye to all the bottles and he drinks from only a sippy cup! I guess we’ll probably be done nursing then too…so maybe it won’t be that awesome of a day haha 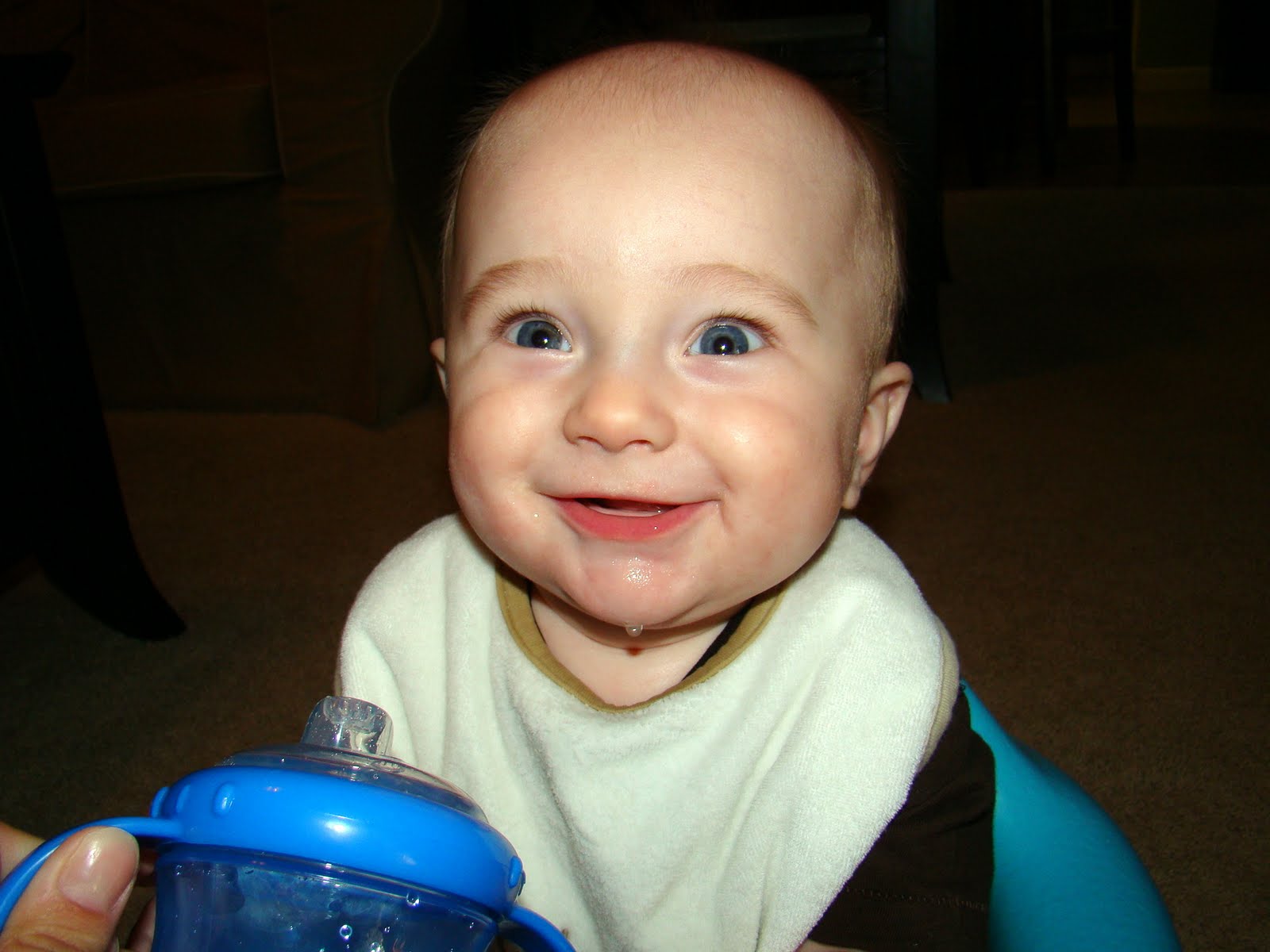