At the end of our tour, the bus took us to the Aloha Tower area where we had a complimentary lunch. It was pretty good food and I enjoyed getting to SIT DOWN! 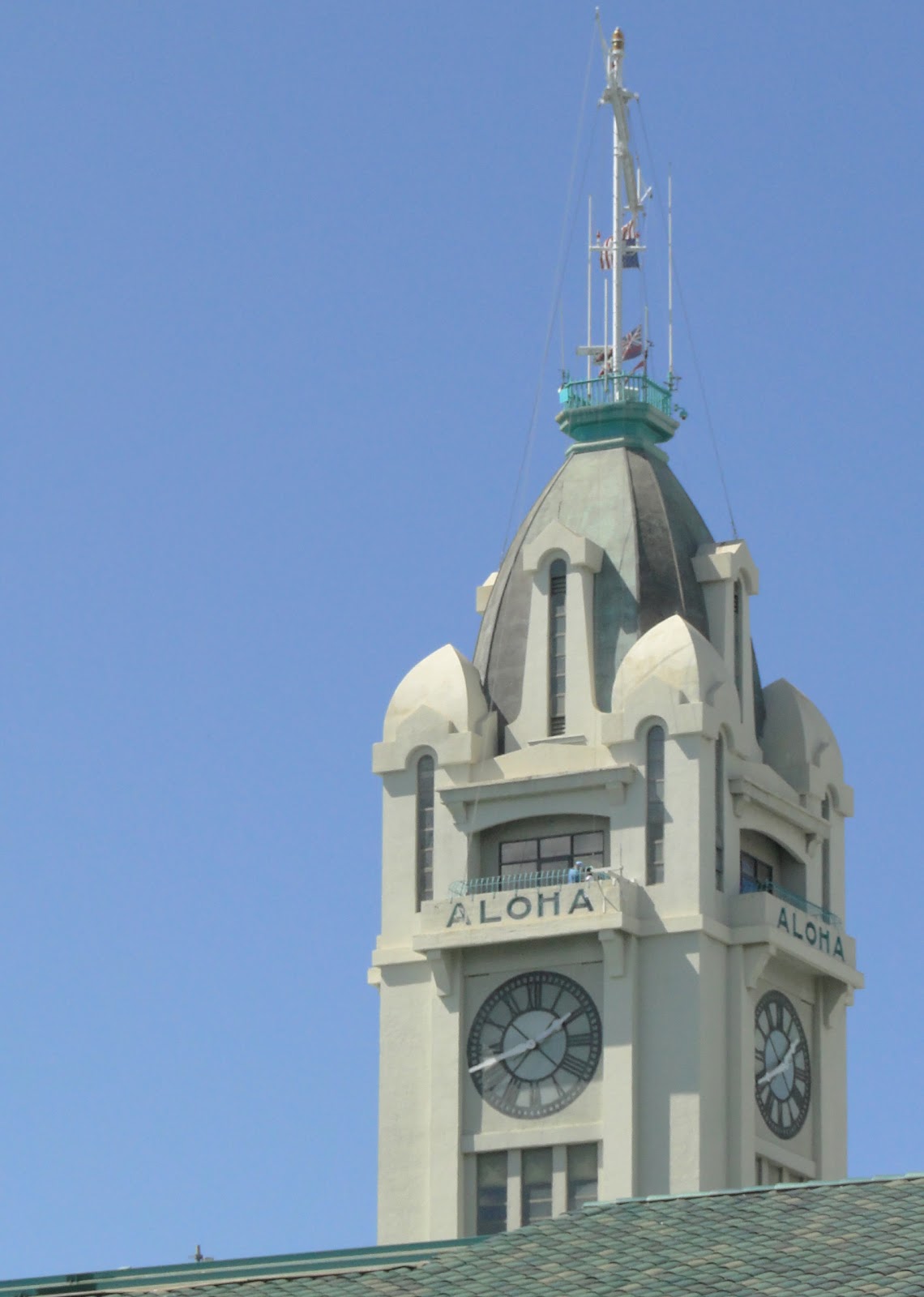 When we left we saw TONS of fish right off the side of a bridge! It’s so beautiful to see such clear waters. We saw all different types of fish in so many colors and several people were buying fish food to feed them. It was really neat! 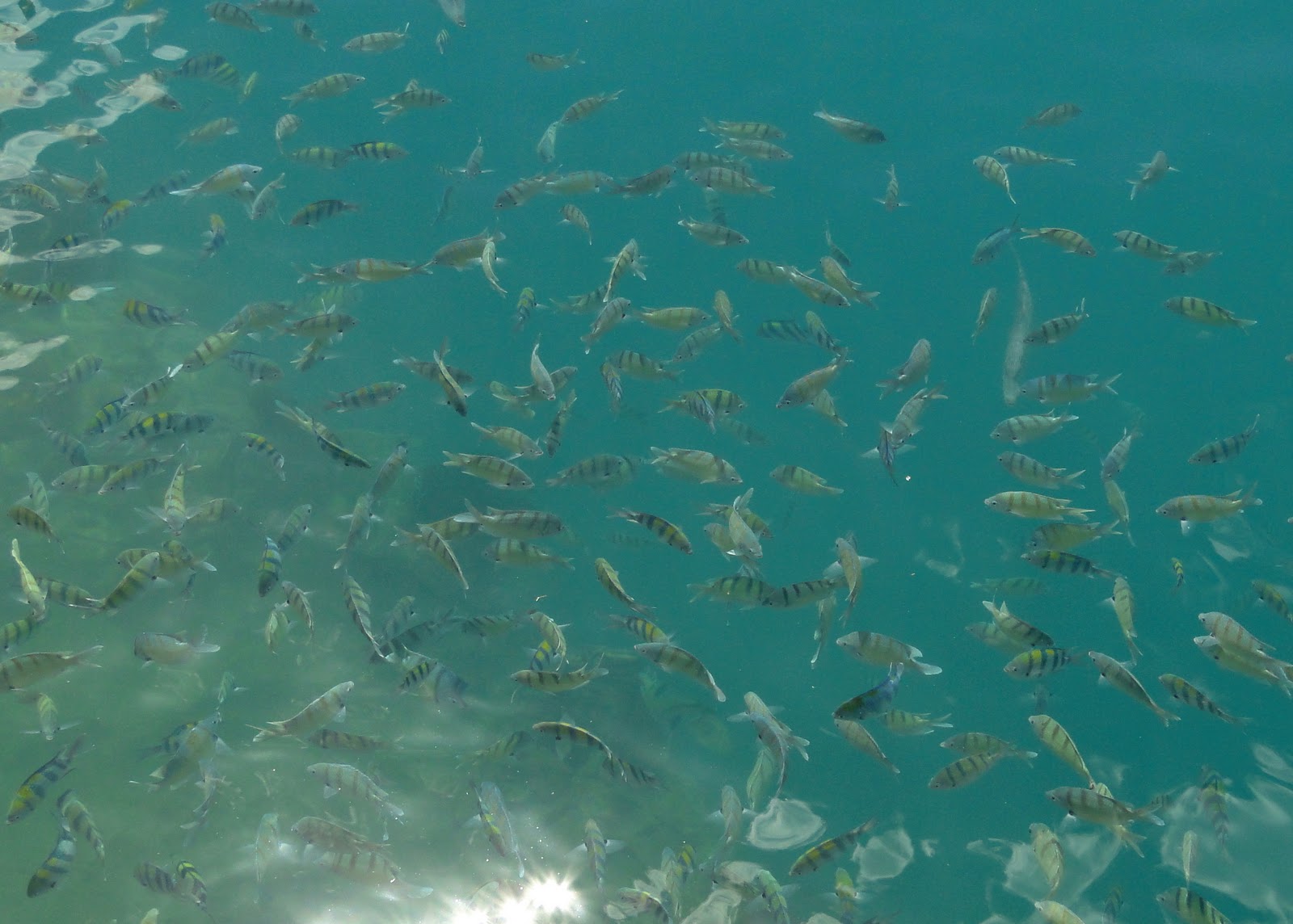 more of the fish 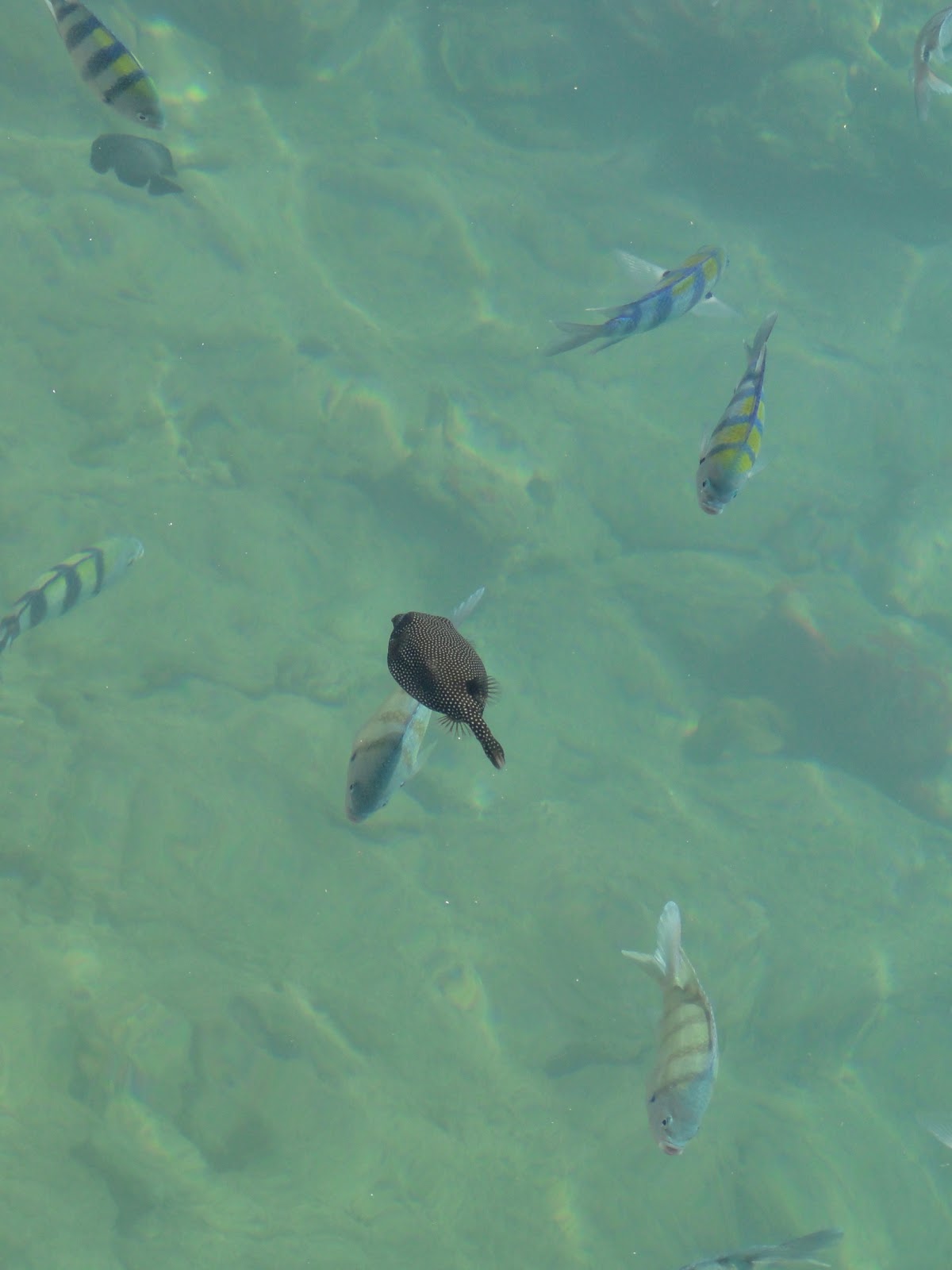 I am a HUGE fan of Hawaii. I LOVED it both times I went in high school, and that love has only grown. Every single little shop we saw I told Zach I’d love anything from there. I just love every single part of Hawaii. The weather, the scenery, the language, the people, but most of all the overall culture. It’s just a HAPPY place with an overall positive vibe. Everyone I’ve ever met is nice and friendly and has an upbeat personality. I mean their license plates have a rainbow on them…can you get any happier? I seriously would LIVE in Hawaii if I could. It’s one of the few places where I visit and could see myself staying forever.

Aloha means both hello and goodbye 😉 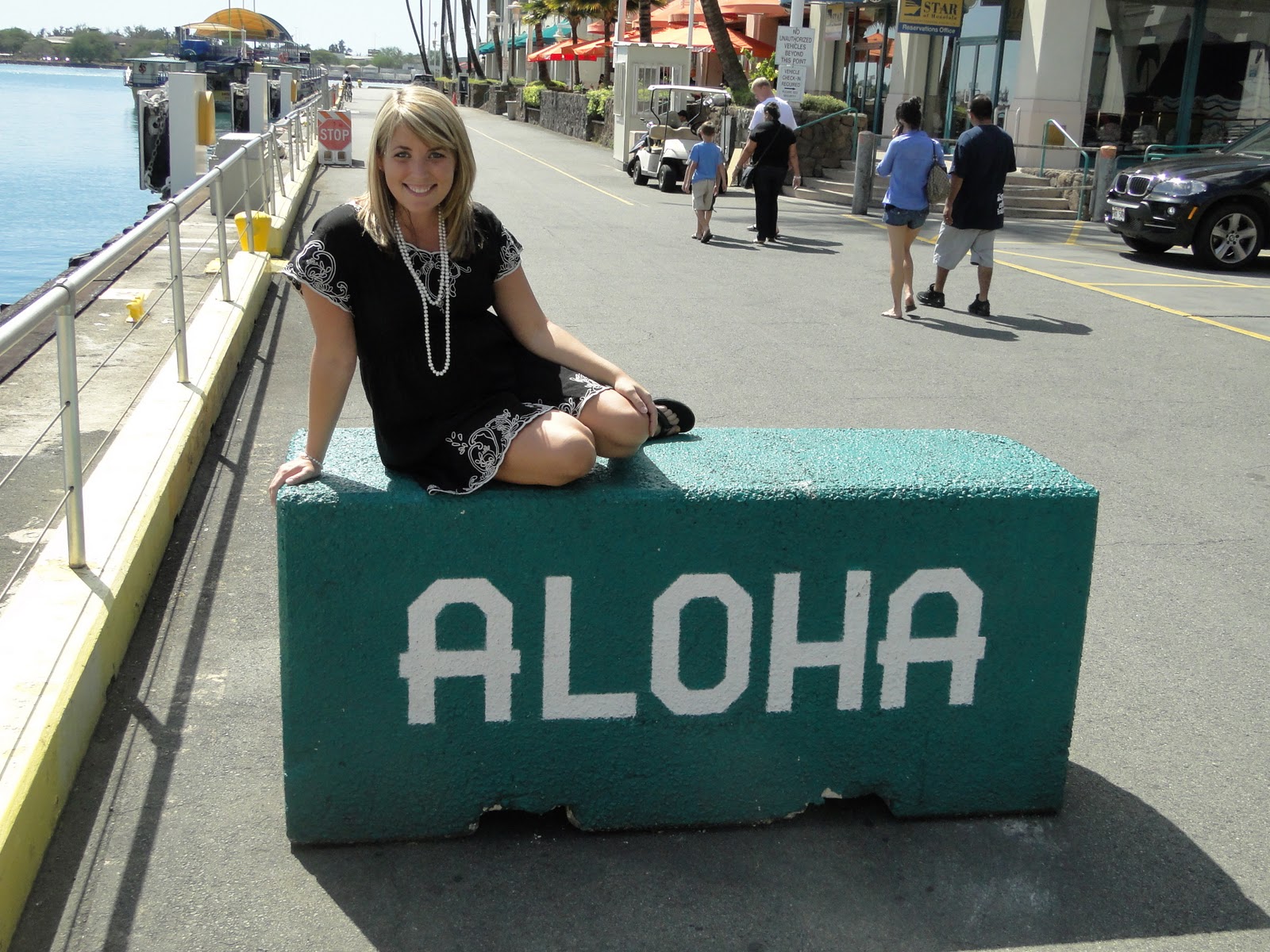 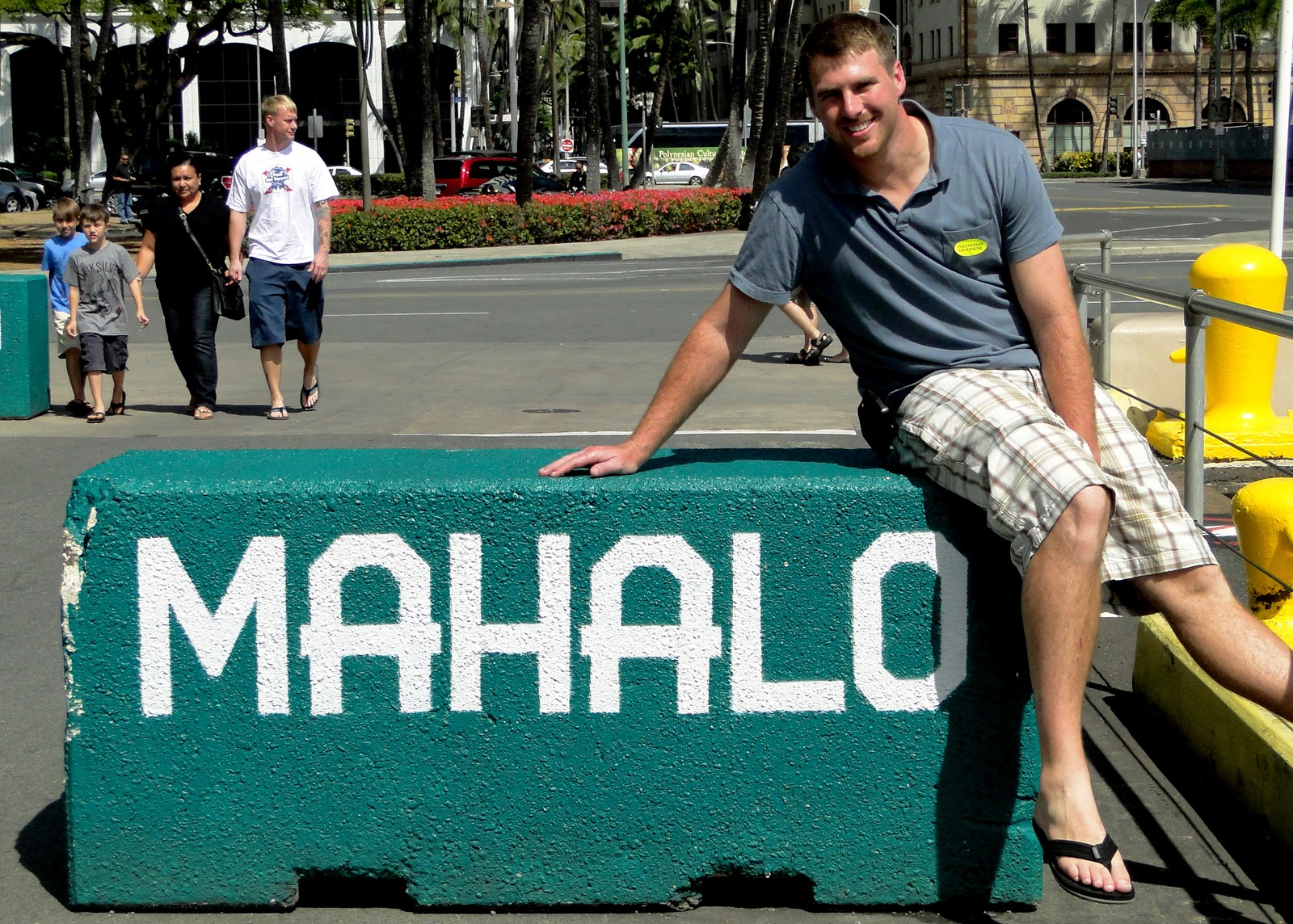 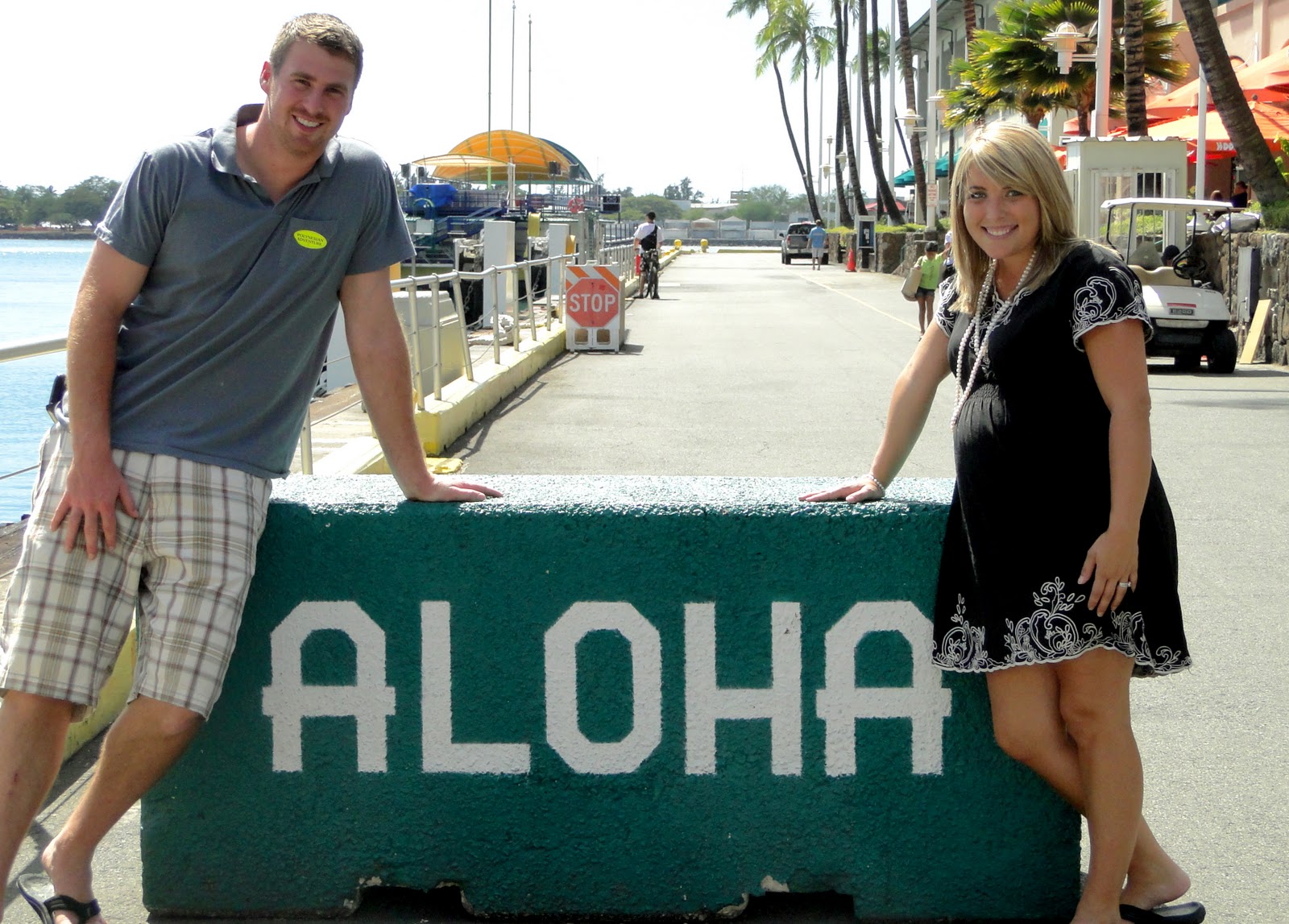 We waited on our bus for over 30 min for a couple who were late. So annoying! We all finally got the bus driver to just leave them haha! We originally planned on meeting up with Zach’s parents after their activity and going to Hanauma Bay. If you EVER visit Hawaii..it’s a MUST see. It is the best snorkeling on the island! We got back so late though from our tour and the bay closed at 4 so there wasn’t time that day. We ended up not being able to go at all 🙁 The day we planned to go (Tuesday) was the only day of the week that they are closed! I really wanted Zach to get to swim with the sea turtles and snorkel together but it’s something that we can look forward to doing on our next visit!

back at the hotel 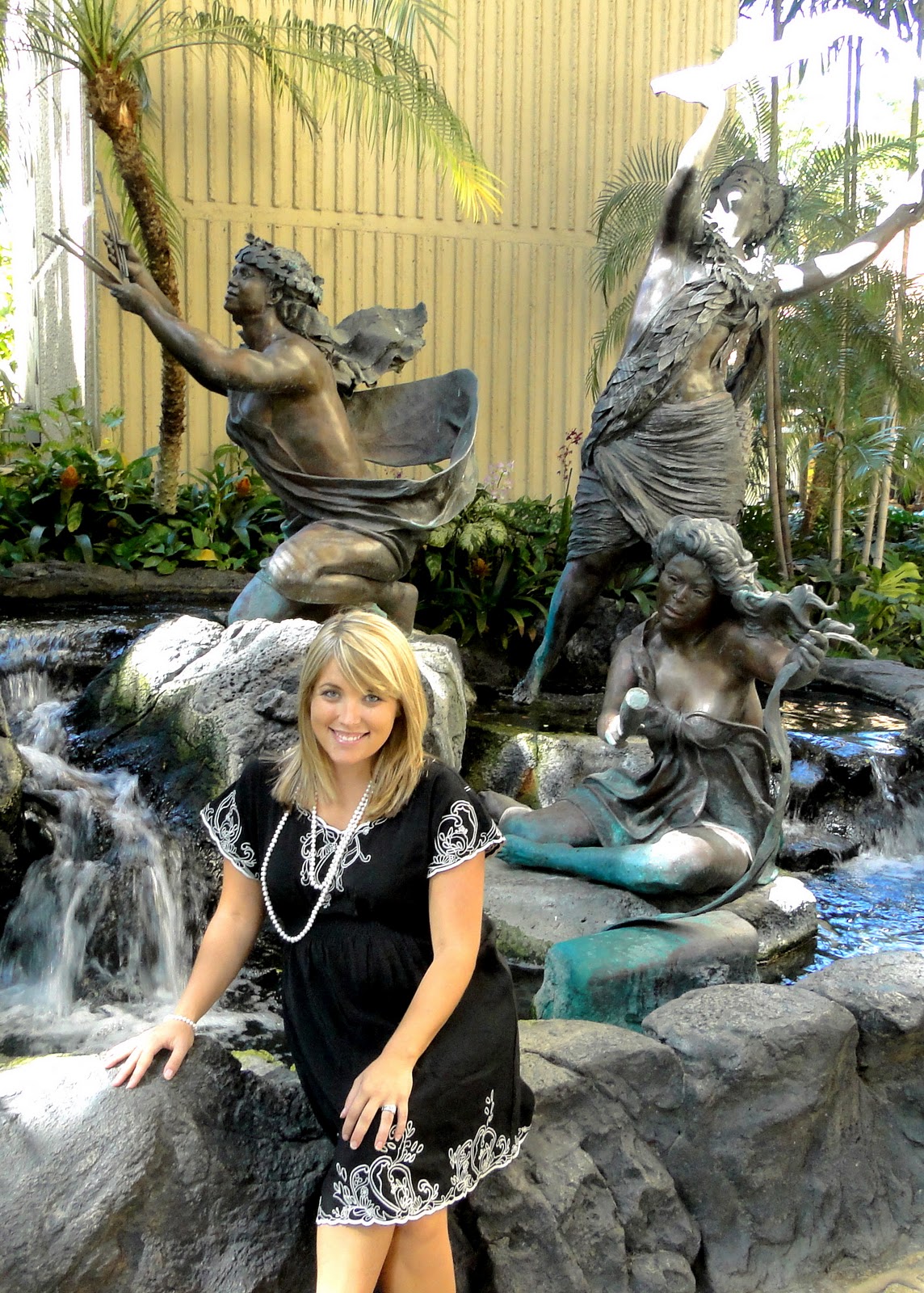 Once we got back to the room we spent some time just RESTING! I love the beds at Hilton hotels…always so comfy! Mr. Rusty and Mrs. Charlotte came to our room so we could have worship services and it was really neat. Right after we got done worshiping a white dove flew onto our balcony (on the 30th story!) and watched us through the door. It felt like God was telling us we made Him happy 😉

Sunday night was our only night without an Aflac dinner. When Zach first started with Aflac he made several short-term and long-term goals for himself. One of the longer term goals was to write a certain amount of business in one year. Earlier this year someone at a meeting or something made a comment that Zach would never reach that goal. I’m SO glad that person said that b/c that made Zach determined more than ever! In his 4th year with the company, in only the 10th month of the year, Zach reached that long term goal! In one week he both had his biggest day with the company ever (in the amount of business he wrote) and hit the overall amount for the year that has been his goal! I couldn’t be more proud of him!!!! I told him awhile back that when he hit that marker we HAD to celebrate! What better place to celebrate than Hawaii right?!?!

I booked us a fancy date night out to eat at Top of Waikiki. I remembered eating there with my dad and thinking it was such pretty views. Usually I wouldn’t book us a place that one of us had already been to, but a dinner date with your dad is much different than one with your husband am I right?!? We were both looking forward to a special date night to celebrate Zach’s big achievement!

I know you probably believe me that I was exhausted and worn out but just to prove it to you…we paid $10 to take a taxi from the hotel to dinner and it was less than a 10 min walk. I was in THAT much pain! 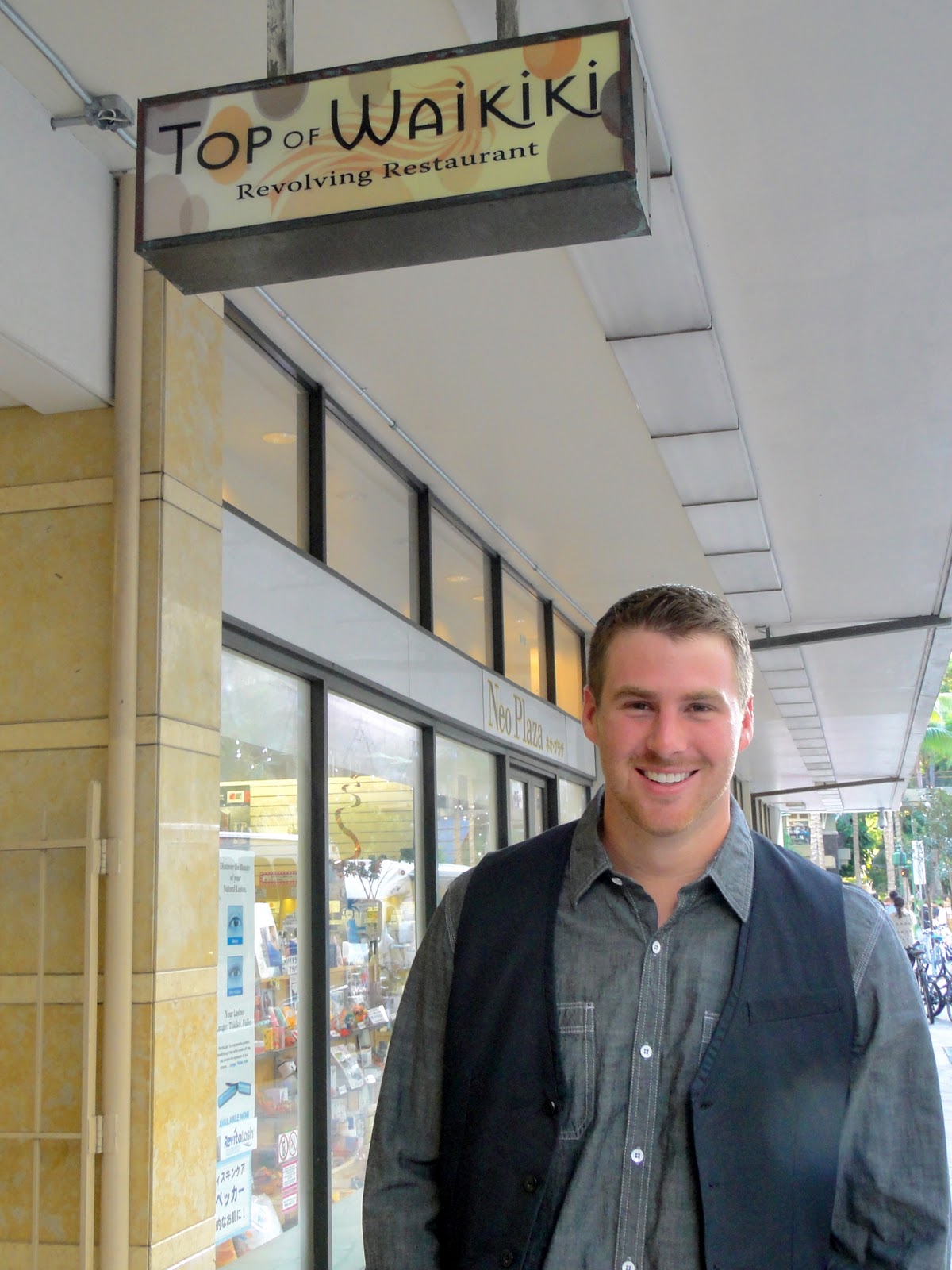 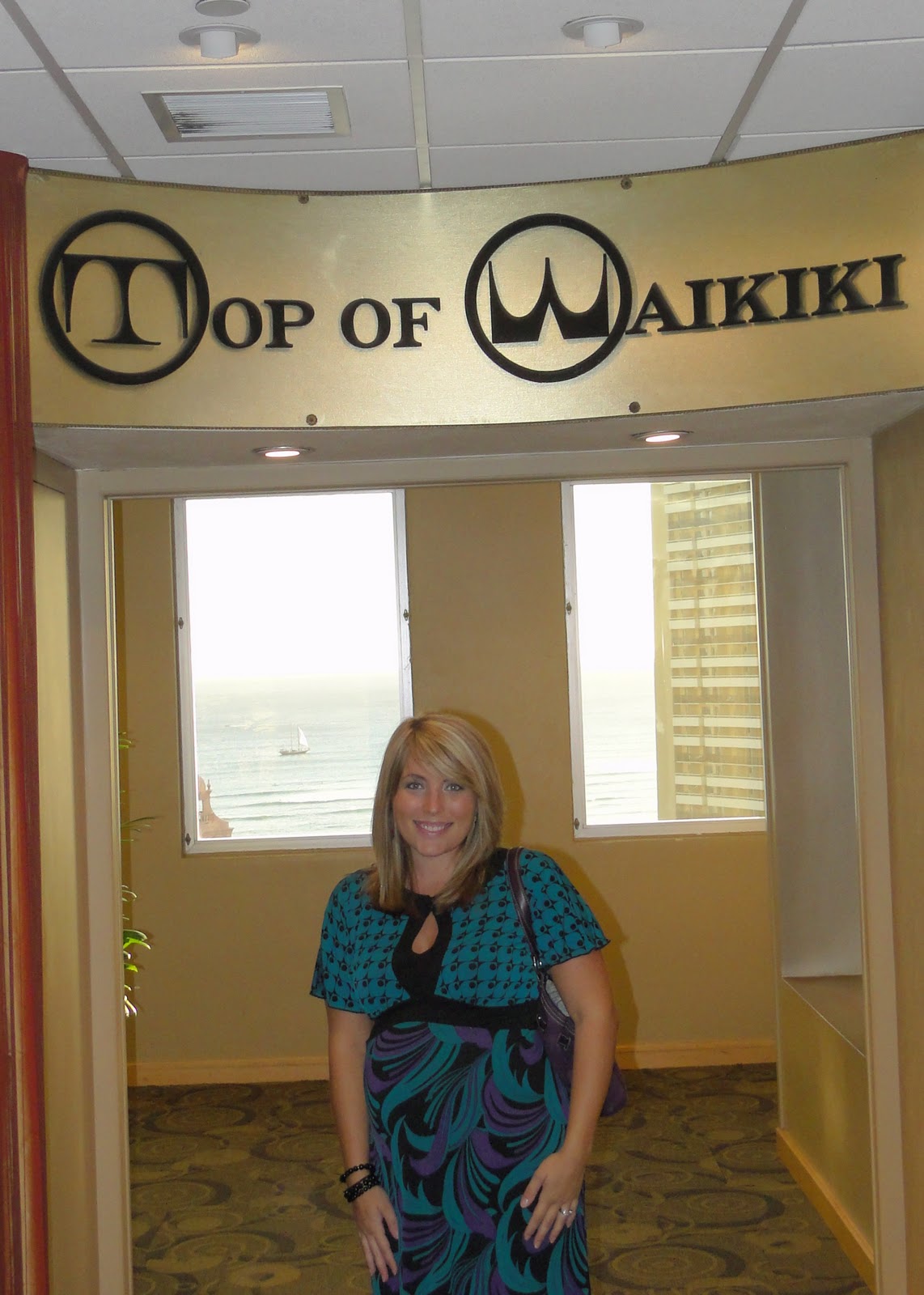 I was nervous about how the food would be. I’m not a big food person (I can’t smell remember? So that really affects my sense of taste) so I didn’t remember if the food was good or not. We knew going into the night that it was going to be expensive and we decided up front not to worry about it or discuss it. We were gonna live it UP! We shared a salad and it was very yummy! 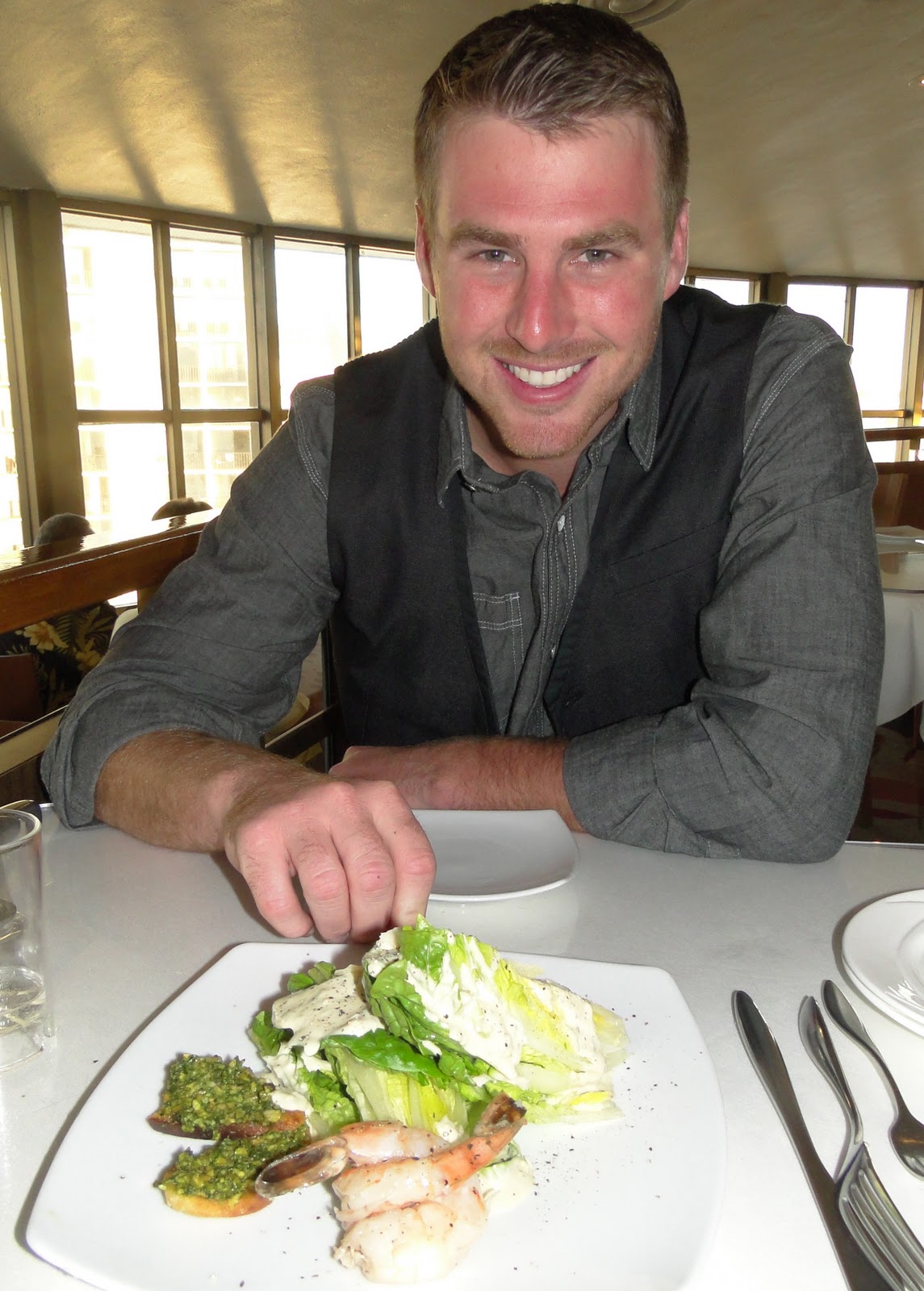 The cool thing about the restaurant is that it’s revolving…like The Sun Dial in Atlanta. You get to see amazing views that continually change throughout your meal. Zach had never been to a restaurant like it before and I thought he’d really enjoy the experience (he did so we totally have to go to Sun Dial sometime when we’re up that way!). I timed our reservations just right so we were able to see sunset and it was so beautiful! 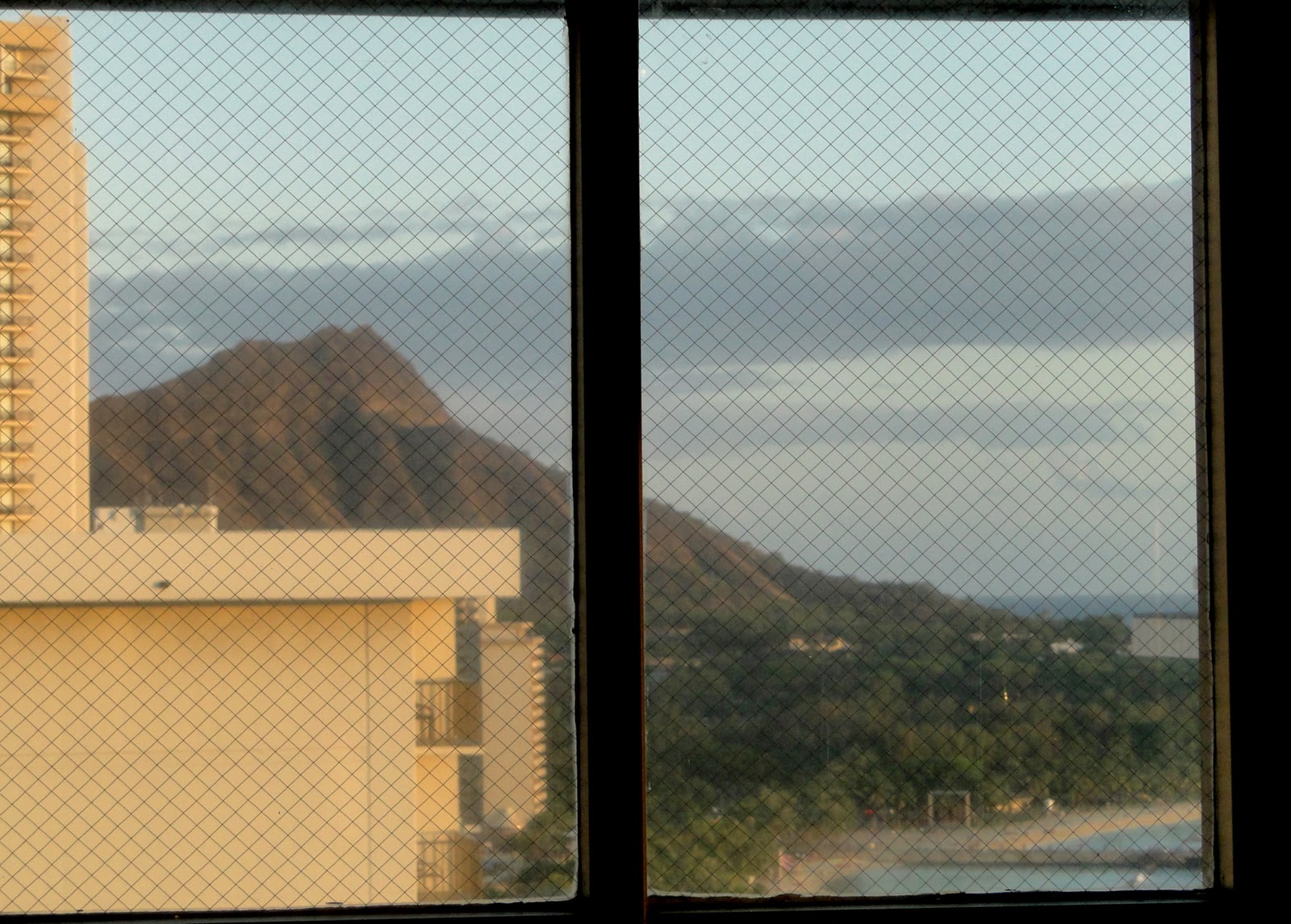 For dinner we each got steaks. Zach said his was THE BEST steak he’s ever had!!! Made me so happy! 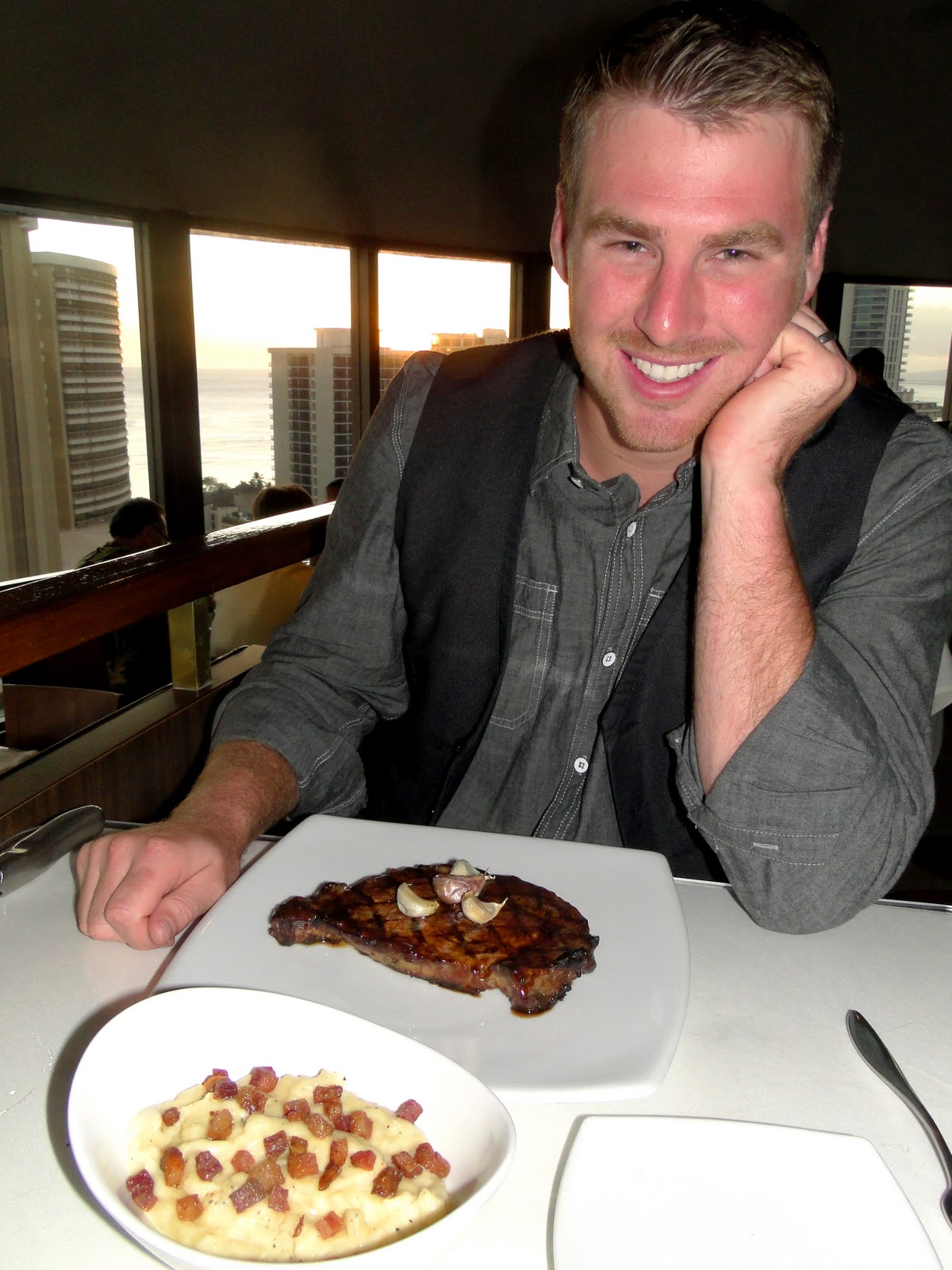 Mine was also delicious and I seriously ate the whole thing in like under 10 min haha. 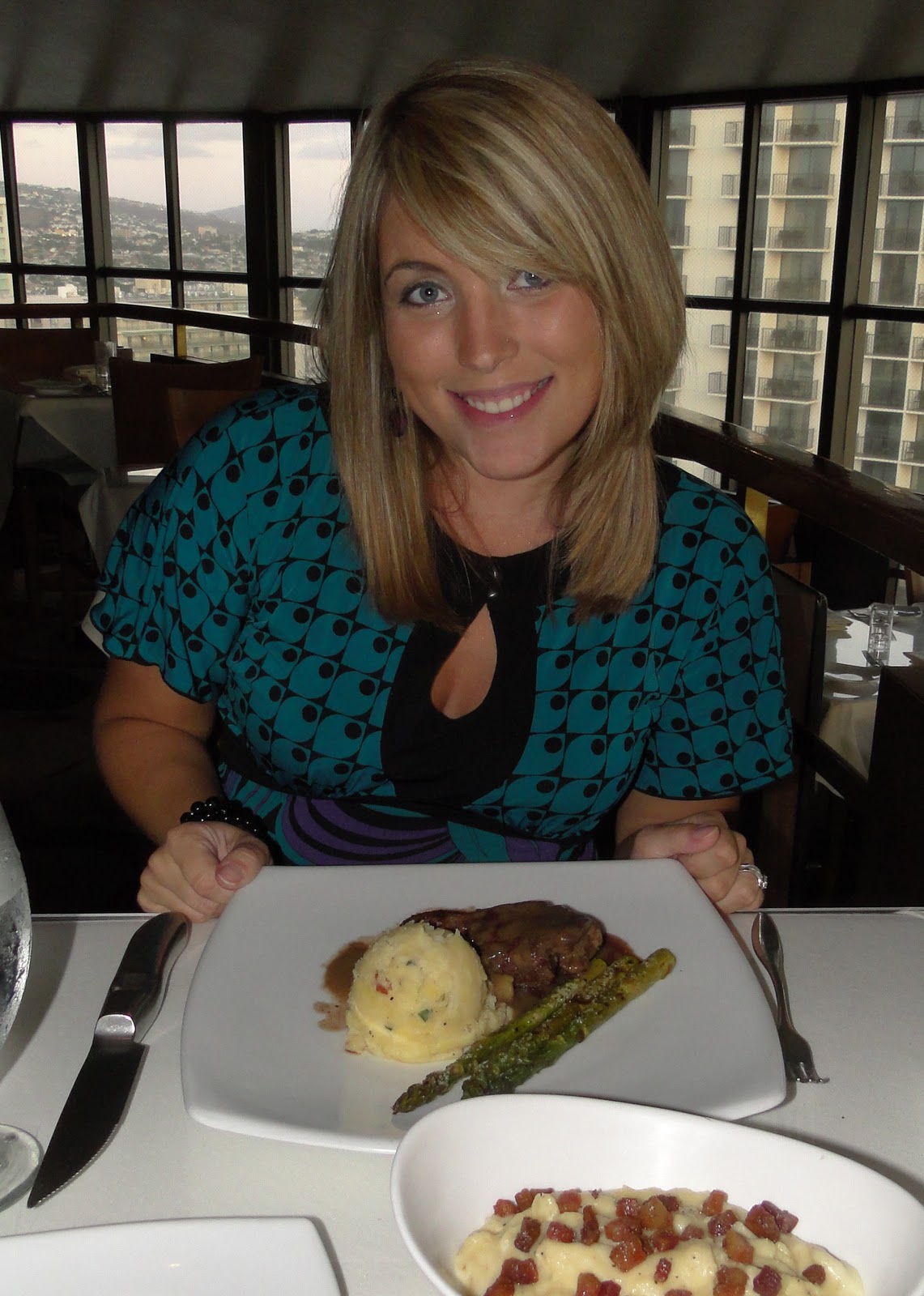 We even decided to get dessert! We debated about going somewhere else to get something but they had chocolate fondue and were able to trade out some stuff so Zach could have a TON of pound cake with it so we went with that. It was SO good!!! 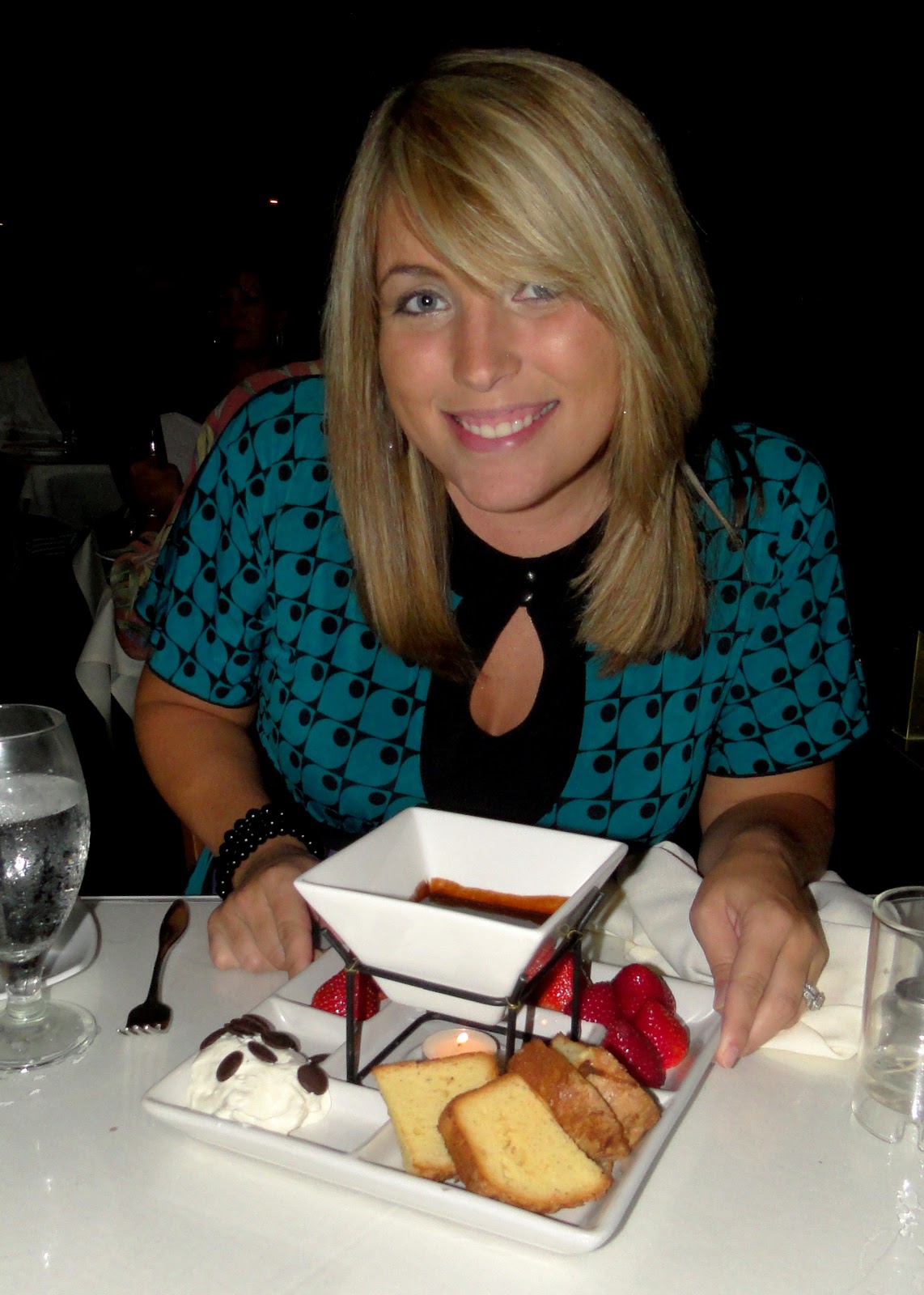 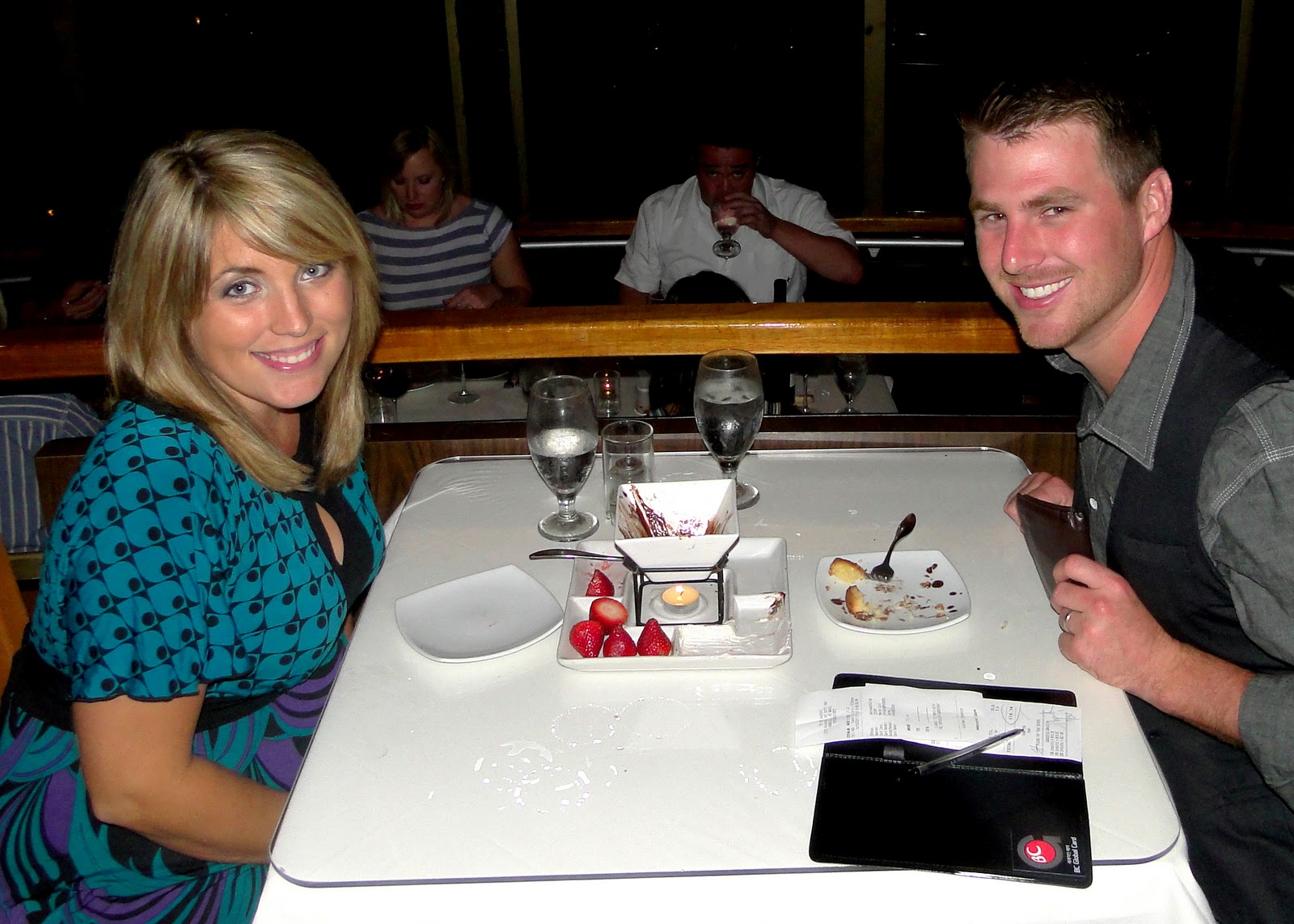 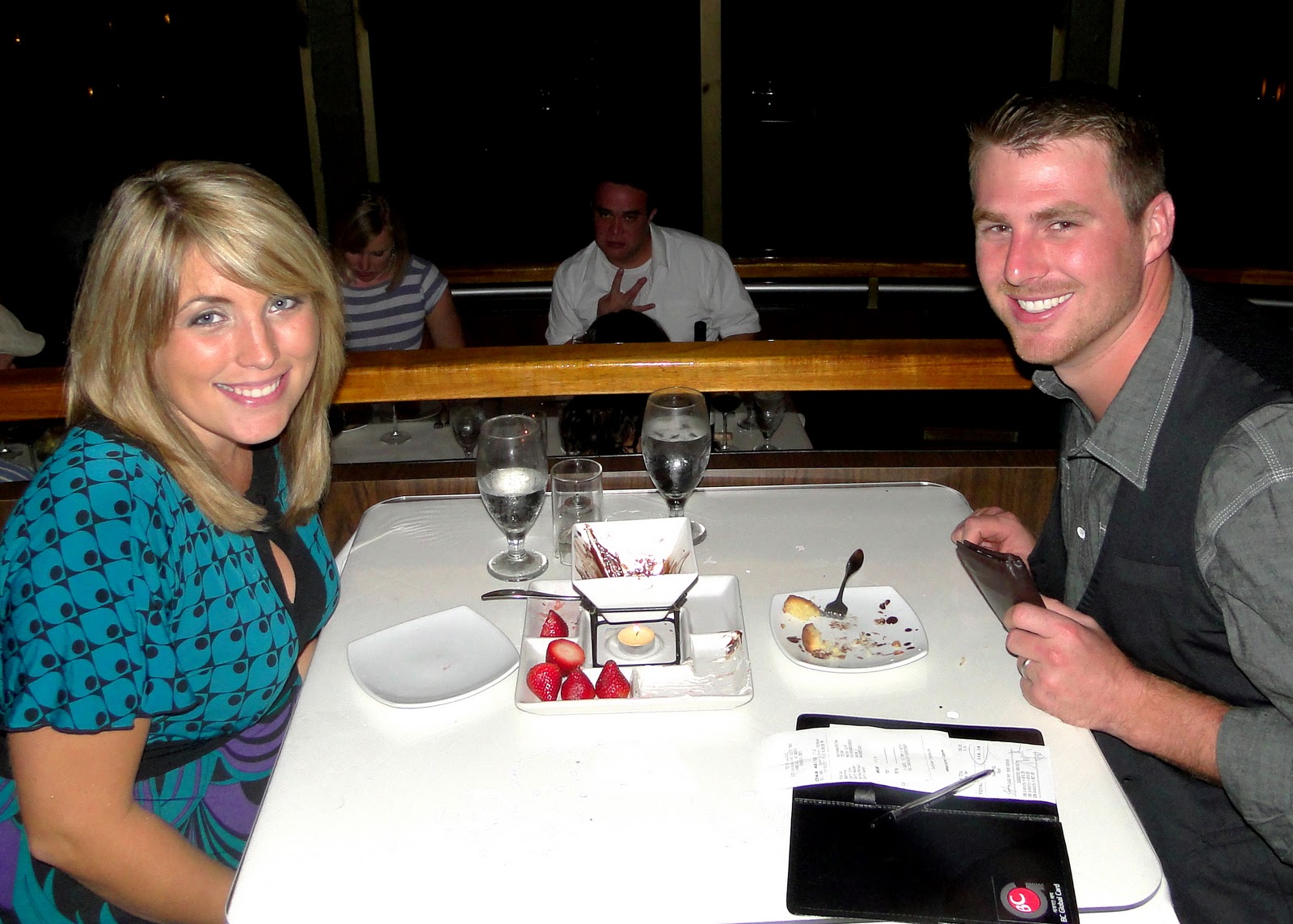 We ended up walking back to the hotel and took a route where we could walk on the beach. I regretted that choice! Zach is very hardcore about getting where he’s going so I ended up chasing him half the way there and could barely keep up. Walking in sand is SUPER hard especially when you could already barely move. It was funny b/c I was (struggling) climbing up a sandy hill from the beach and heard my name! Mrs. Charlotte and Mr. Rusty were eating dinner at a place we walked by and saw me! Small world, even in Hawaii 😉

We went to bed pretty quickly that night because we had another big day ahead of us the next day! It was a (long and tiring) successful 2nd day!