My second trimester has NOT been fun so far. I have always had bad headaches but had them under control using IBProfin (like 6 of them if needed). I really thought once I got pregnant the headaches would go away because they did for my mom! Well instead they are MORE intense and I can’t take anything but Tylenol for them. I am so nervous about taking Tylenol that I wait as long as possible then only take ONE if I really need it which basically does no good at all for me.

It has been awful dealing with them. Both last Tuesday and this Tuesday I had such bad ones that I literally couldn’t move from the couch, I just kept my head pressed against one pillow and used my other arm to press against the other side of my face. Last Tuesday I watched 7 HOURS of tv due to the headache! I usuallly go to a women’s bible study Tuesday mornings at 10:30 but I have to keep missing it 🙁

I was looking forward to Tuesday ending and Wednesday beginning because I’ve never had a migraine last more than 24 hours. Well yesterday hit and great no headache…but instead my heart was RACING like CRAZY! 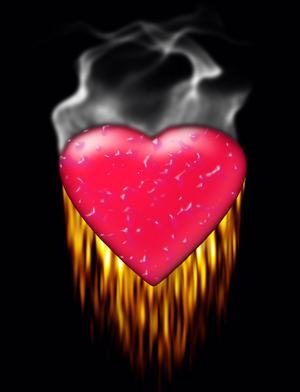 I cannot handle caffeine very well and if I drink coffee (a VERY RARE occassion) I will be up all night (even if I drank the cup in the morning) and my heart will be beating like crazy. This is how my heart felt yesterday morning, but I hadn’t had any caffeine at all.

I thought it would go away after a little bit but it didn’t. It made me feel light headed and like I needed to slow down my breathing or something. I googled it (I seriously haven’t opened my What To Expect book b/c why waste time with a book when Google is soo much easier) and people who had similar symptoms said they only happened when they had exercised and usually went away after resting.

Of course that made me nervous so I called the dr. They take FOREVER to get back to you! So annoying! Once she finally called I had already gone to Walmart b/c I gave up waiting. She said that she’s pregnant too and gets that feeling sometimes and that what is happening is my heart is having to work extra hard to pump blood for two people instead of just one.

She said while it was normal that if it was bothersome, didn’t stop, and if I had shortness of breath (whatever that means) that I should go to the E.R. Now does anyone know me to be the type to run to the E.R? My last name may be Parker but I’m not a true ER-loving-Parker at all!

So I toughed it out and while I still feel it a little bit today it’s not half as bad and I figure I’ll get used to it. I just know my body very well and probably the slightest difference in my heart beat and I notice it haha Even though it has been an annoying couple of days, it is a reminder that I am actually pregnant because everywhere I go no one believes me 🙁

It’s a compliment that people think I can’t be really pregnant b/c I guess I don’t look it but still WHEN will I get a REAL belly? The little pouch I have now gives NOTHING away and just looks like chub. I’m ready to be a true pregnant chick 🙂