One of my favorite home movies to watch is one when my little brother was a baby and I was about 3 or 4. My mom was trying to bathe Brandon and I was being annoying (trying to get the attention obviously). I was pretending to be a dog and kept crawling around on my hands and knees barking. Mom got annoyed (my dad was one of those who just kept the camera rolling haha) so she finally snapped at me and said, “Emily if you don’t stop it then the dog is going to have to go outside.” haha

I think of that video often when I watch Kye. He has always LOVED the dogs and now that he’s mobile he also LOVES their stuff. When he’s allowed the freedom to crawl about and ALWAYS finds one of their toys. Here’s a video of him trying to reach the toy through the gate.  He also loves to open and close their crates. It’s too cute!

He’s crawl around with a Kong in each hand 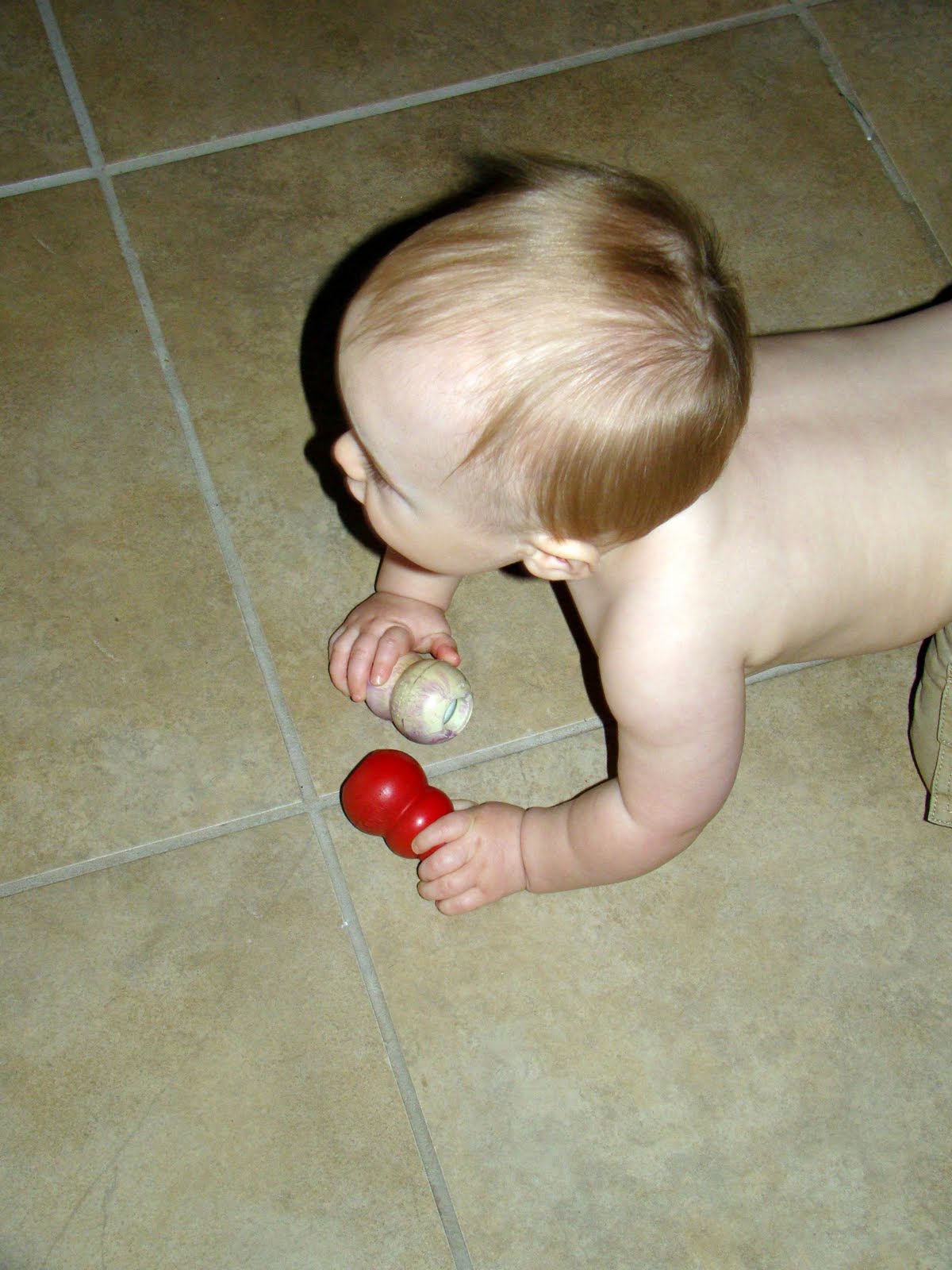 I’ve learned Rachael’s saying: “NOT IN THE MOUTH!” 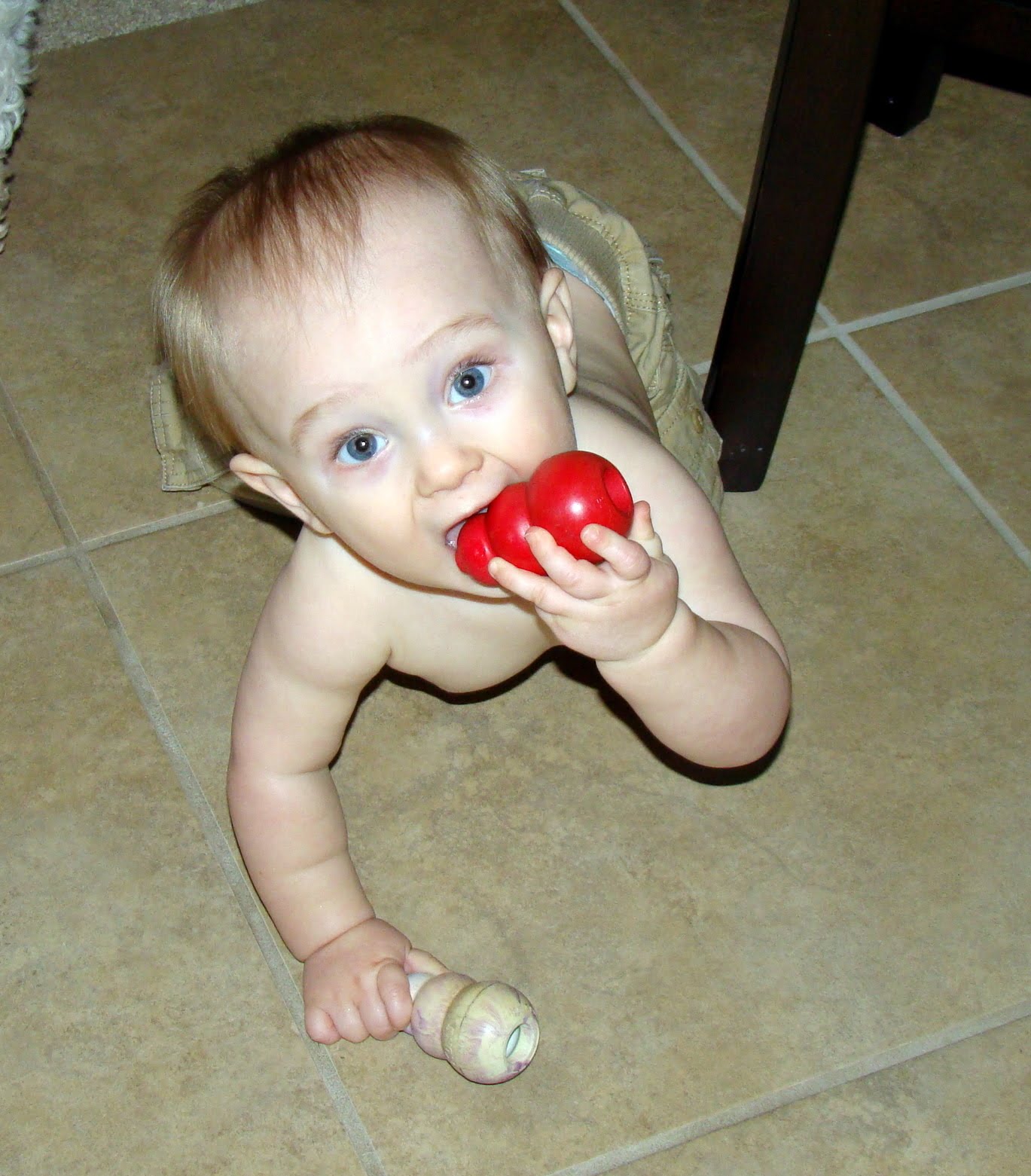 he knows right where to put their toys! 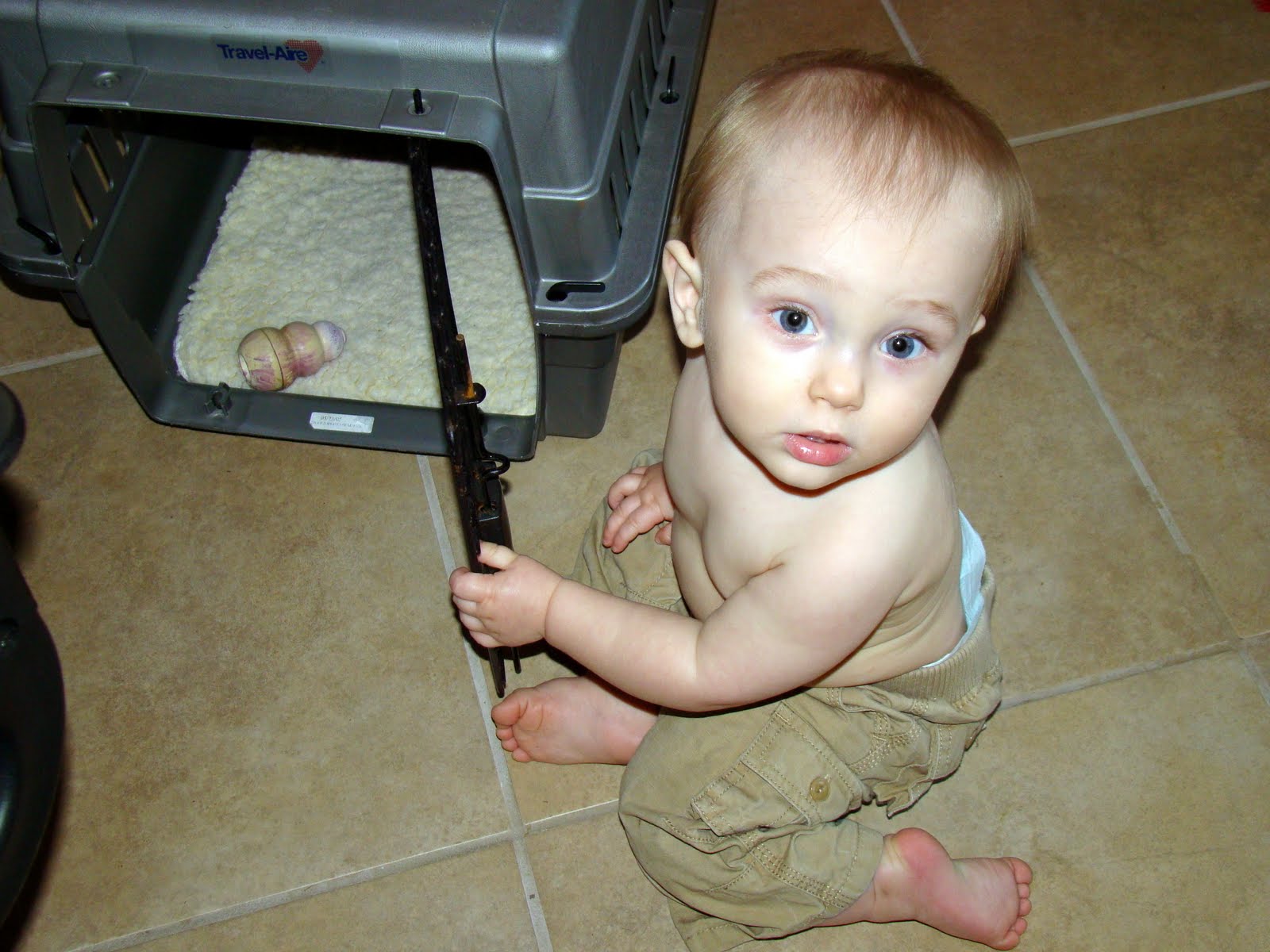 commanding Levi to get in his crate 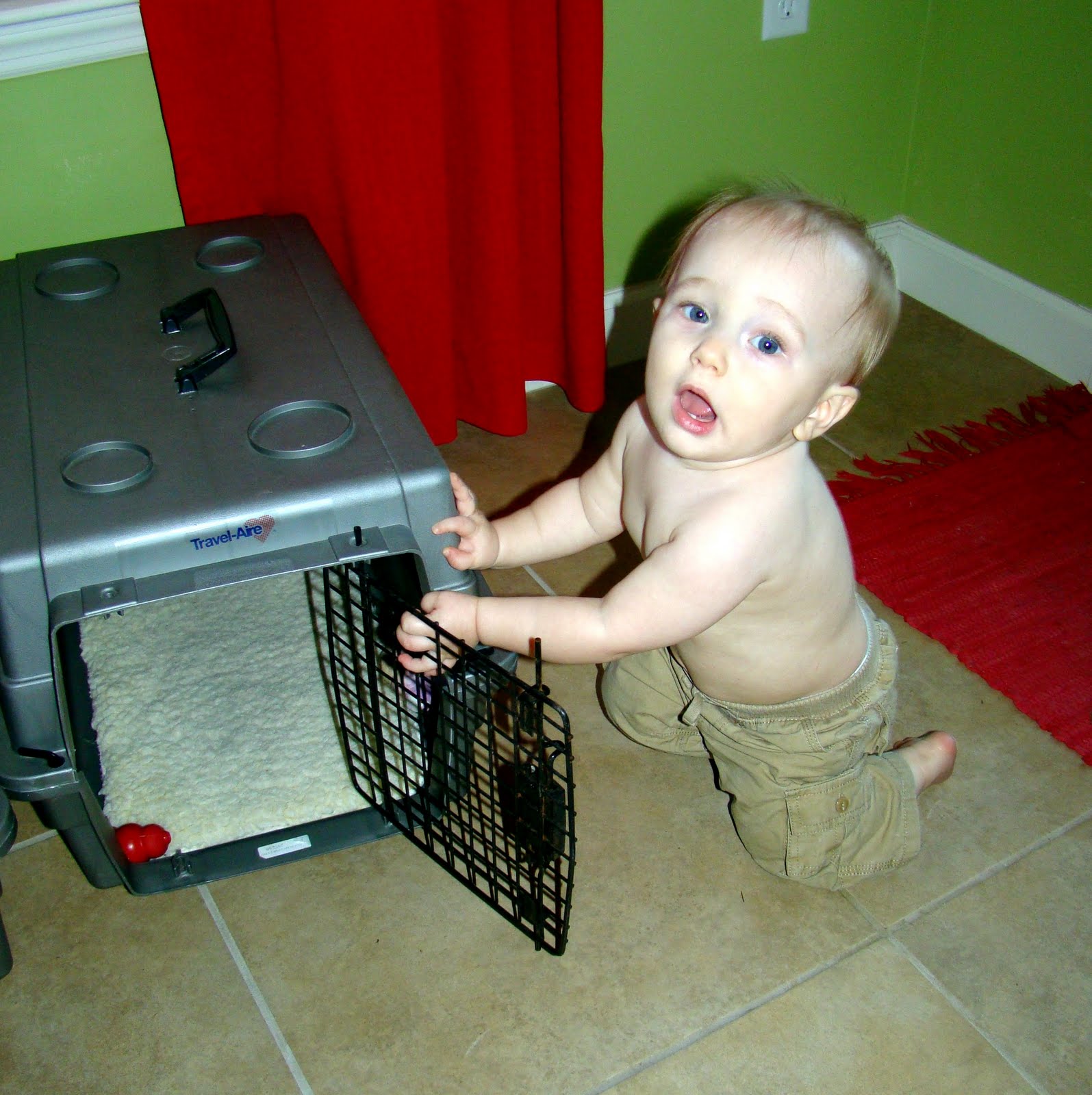 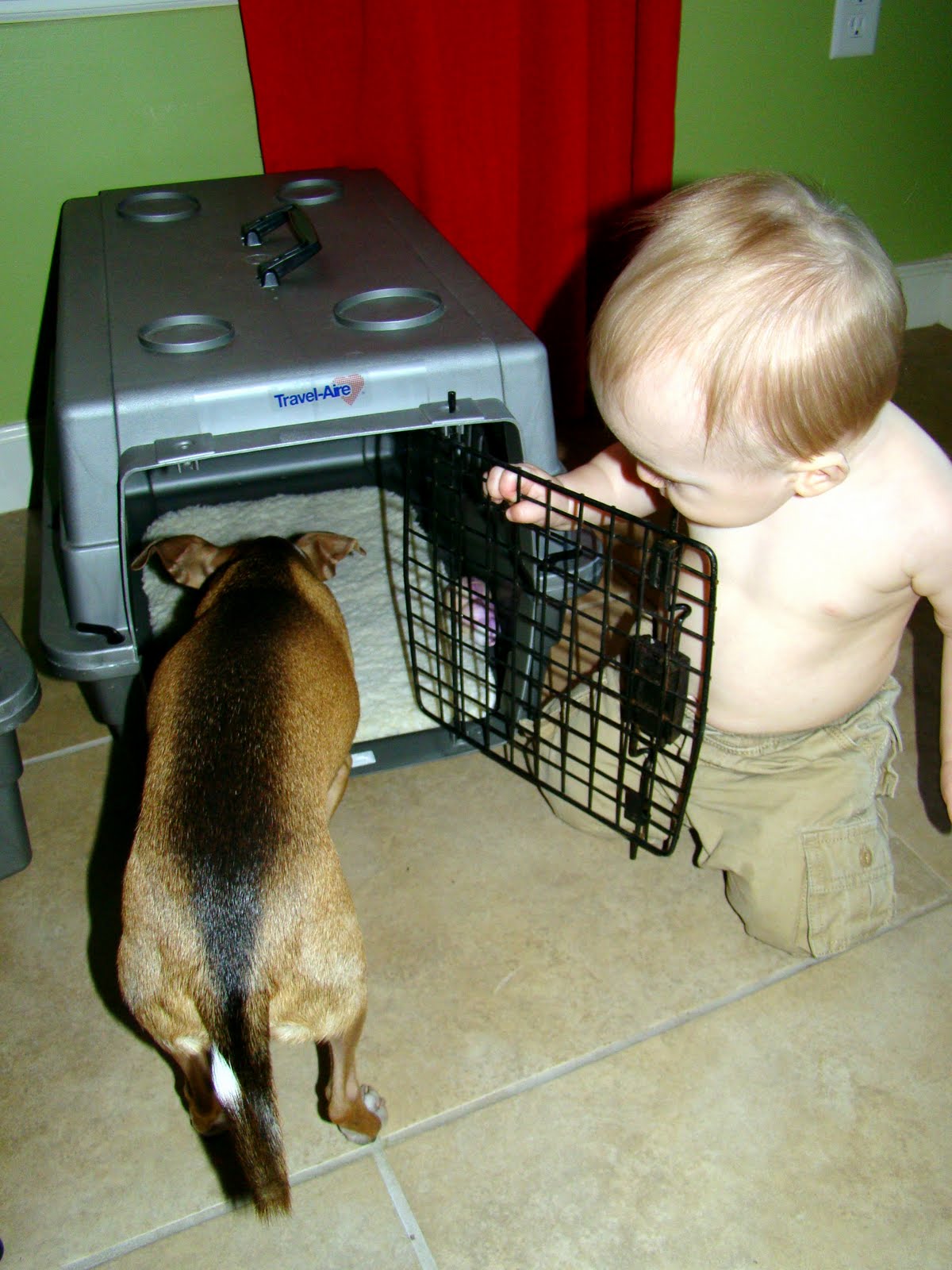 When Kye has his sippy (in my lap in his chair in his room) Levi usually sits with us on the back of the chair. Kye just adores taking breaks from drinking to look at Levi and laugh at him. I seriously wish I could get him to laugh like the dogs can by just sitting there! He’s finally starting to learn to be gentle when he pets them and always does it with an open hand now (whereas in the past he’d grab a fist full of fur any chance he got…). Even though he’s being sweet he’s like his daddy and has a heavy hand because his “sweet and gentle” pats are more like beatings haha. No biting yet though so hopefully that’s a good sign! 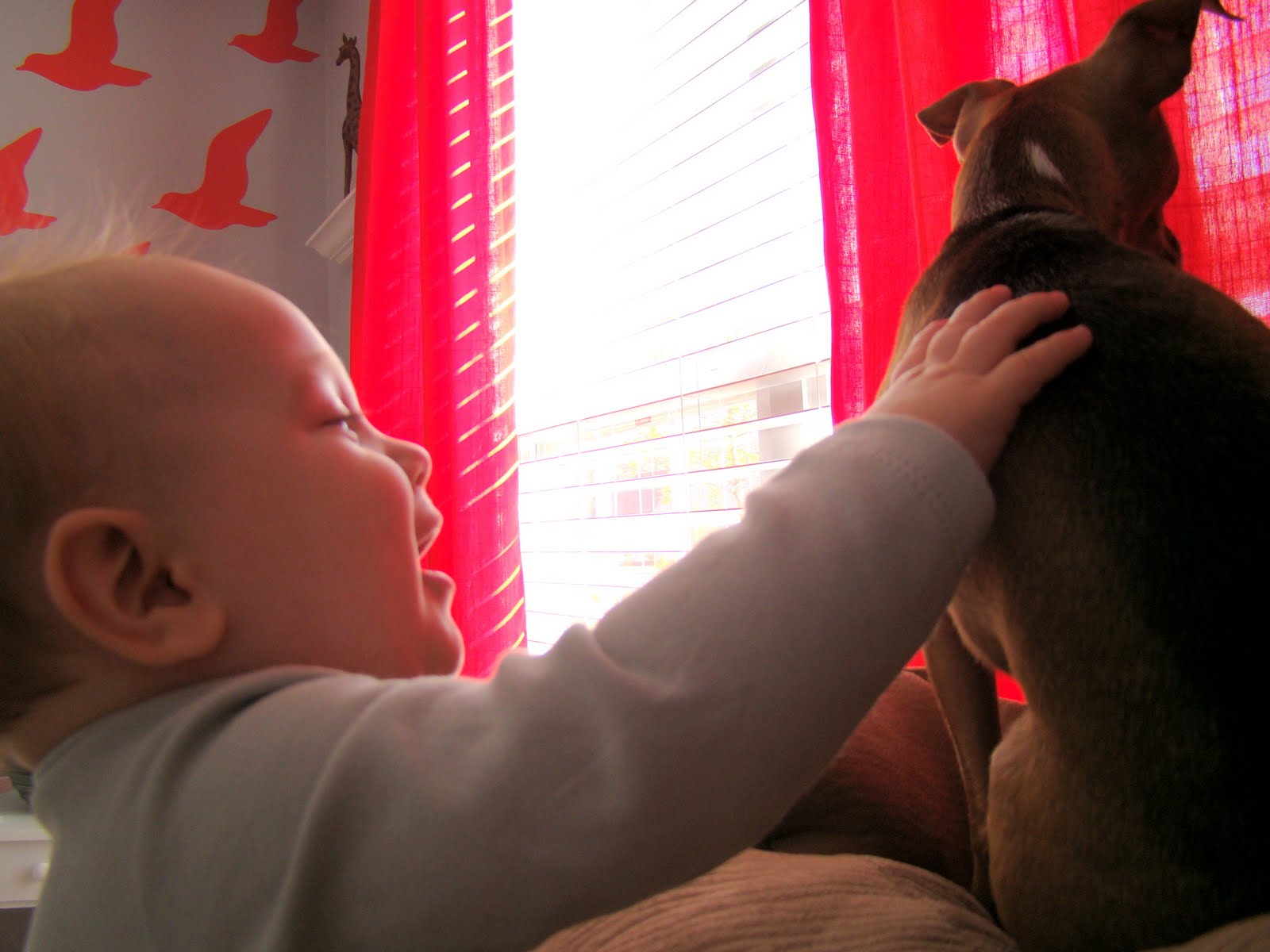 how could someone NOT want a pet dog??? 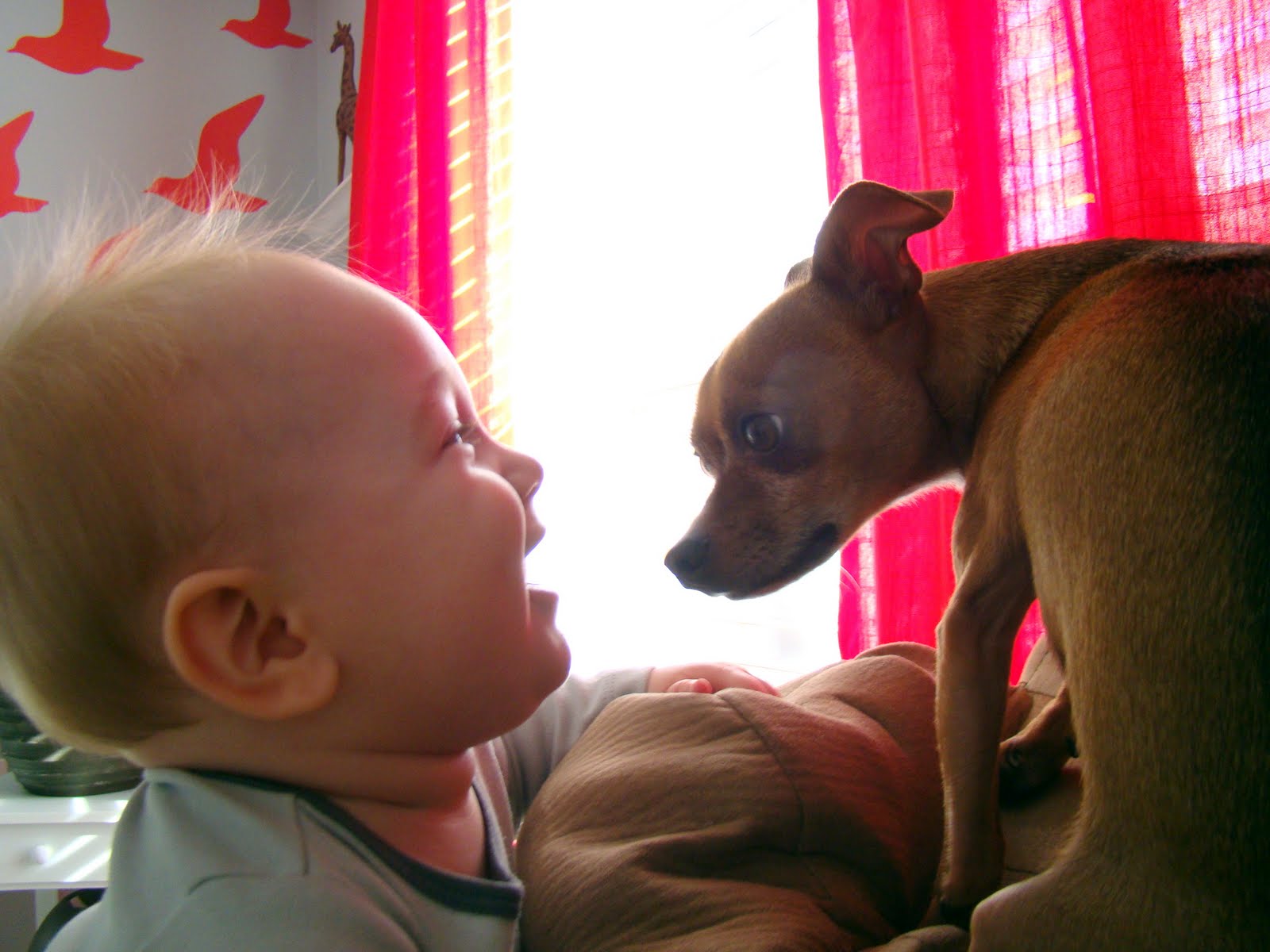 He loves them so much that when we go play outside he can’t focus. Levi and Sadie are inside barking at us so instead of playing he crawls up on the porch to get to the window to see them. They are his best friends!!! 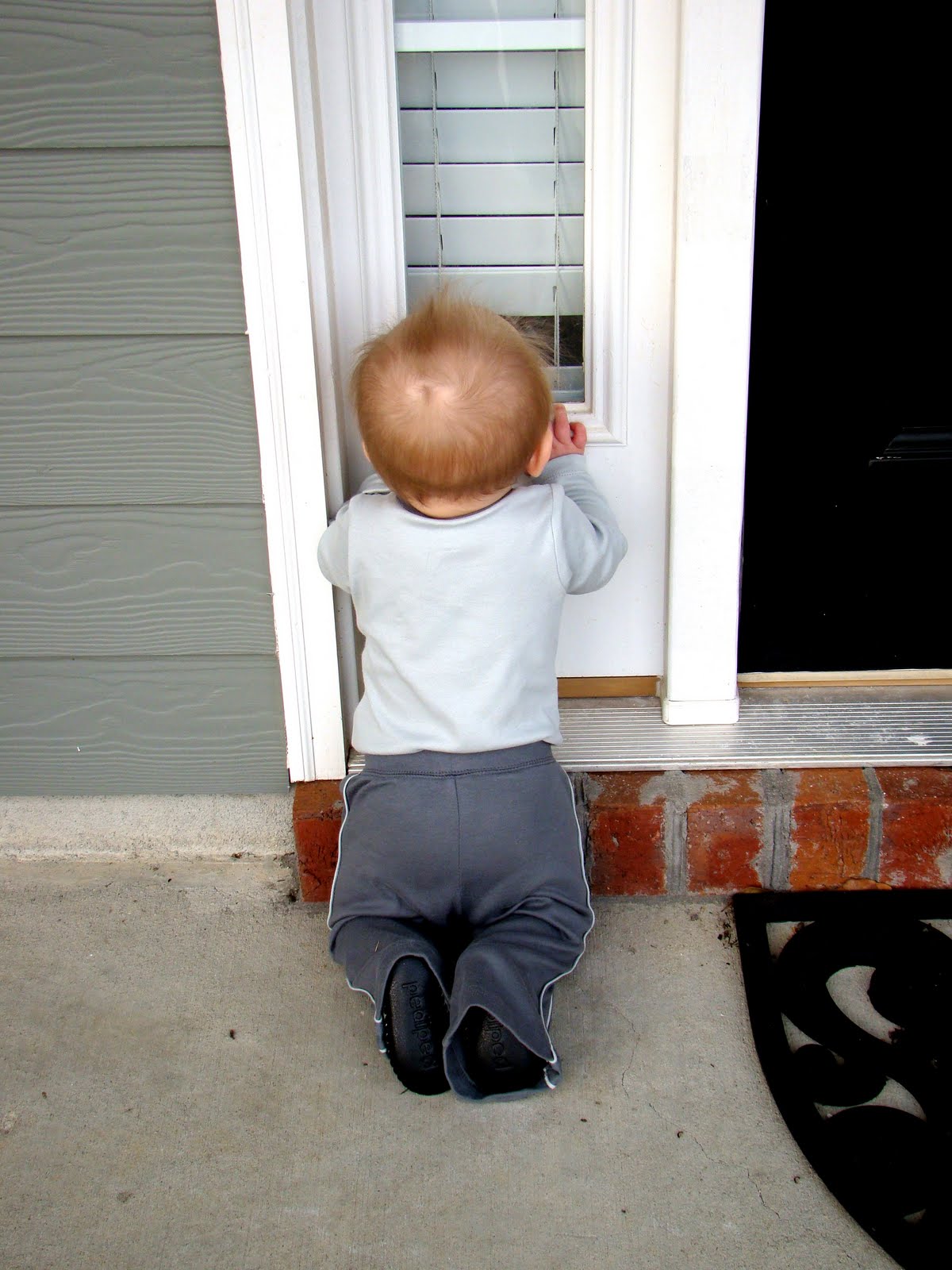 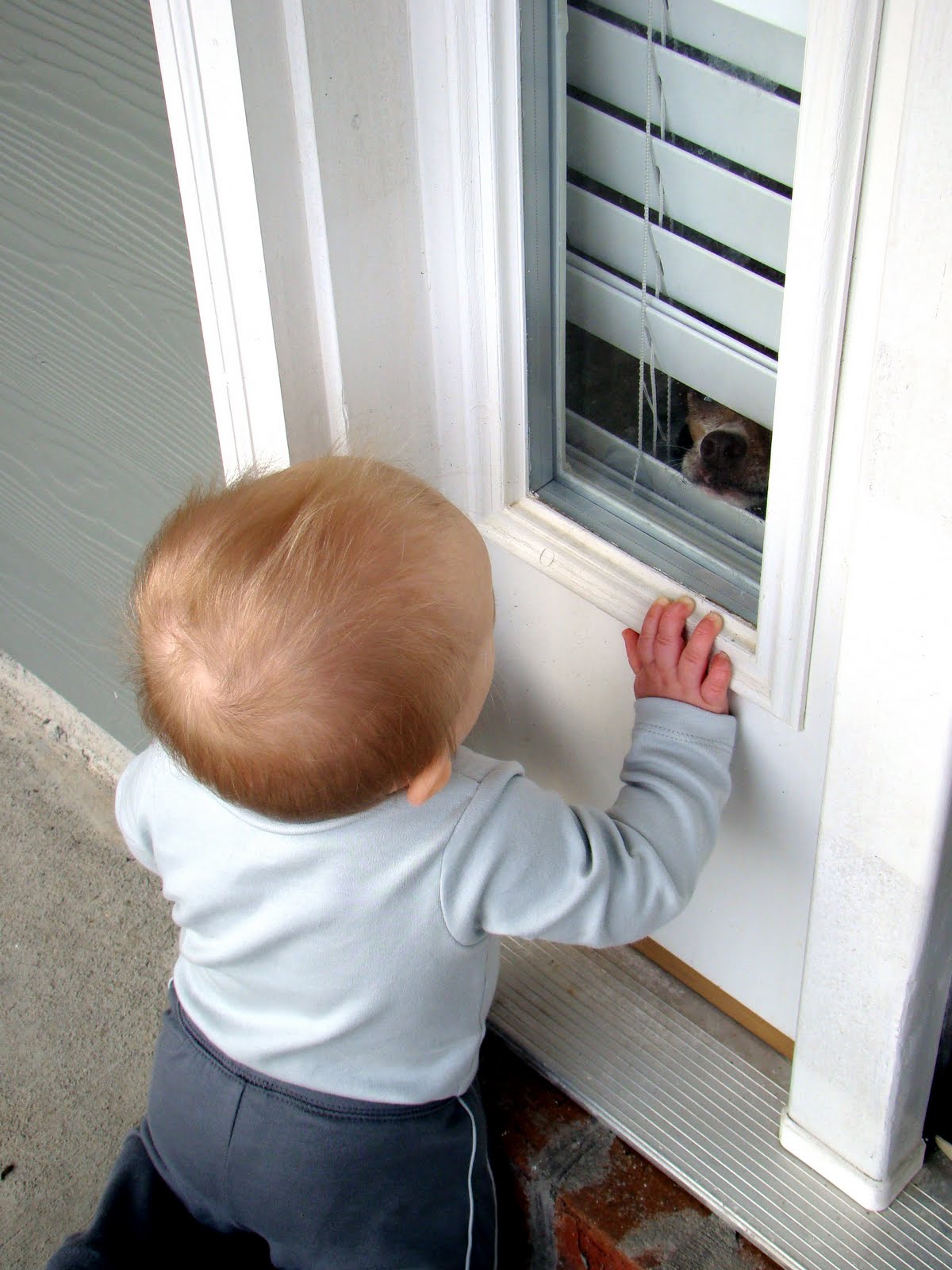 While this post may appear like Levi is the favorite, Sadie is more tolerable of Kye and will allow him to pet her more than Levi does. I feel bad that I didn’t have any pictures of them together to post but Sadie has a BAD ear infection (turns out if you NEVER get your dog professionally groomed that their ear hair will grow so long that it gather all the dirt and gunk and get infected, mega gross). She’s on meds (twice a day) and we can’t bathe her until she’s done with them (14 days!) so she’s NASTY and I know she’d be embarrassed to be seen like that!

Kye loves BOTH Sadie and Levi and I think it’s especially great to have both of them as since birth watching the two dogs interact has been a great source of entertainment for Kye. He will just sit and watch them and crack up when they play fight. My favorite thing though is that now Kye joins in on the fun! He will play fetch with Levi (throws a tennis ball for Levi to go get!) and he will play with both of them with their toys! Here is a video. I love the idea that Kye will be all boy and have adventures with his dogs and I think that’s in our future for sure!