Kye turned one month old on Saturday! Most people would say “I can’t believe it’s already been a month.” But for Zach and I we can’t believe it’s ONLY been a month! It feels like this has been my life for so much longer than that! When I look at Kye and his birth pictures it is hard to believe how much he has changed. It’s so neat that babies grow and develop so quickly!

Already weighs as much as Levi… 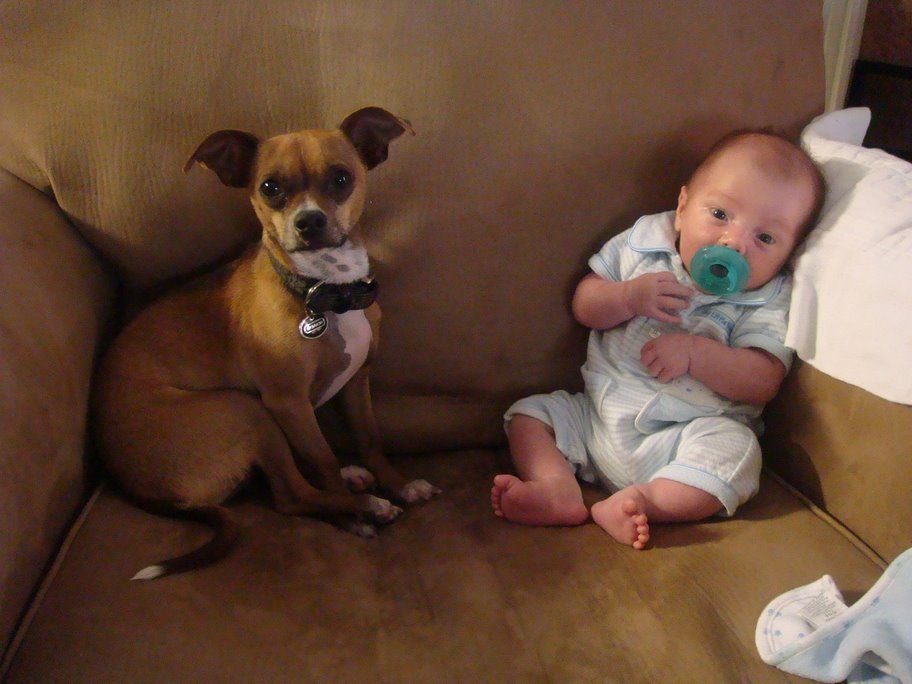 I’m using the What to Expect the First Year book as a guideline to see if he’s “on track” or not with his development. Personally, I don’t put a lot of stock in this kind of stuff. If he’s behind so what? It doesn’t mean something is wrong with him! And if he’s ahead it doesn’t mean he’s gifted either!

Of the things it says he: will probably be, may possibly be, or may even be able to do he can:

1. lift head 90 degrees when on stomach
2. hold head steady when upright
3. smile spontaneously
4. smile in response to my smile
5. vocalize in ways other than crying
6. respond to sounds in some way
7. focus on a face

The only thing he can’t do is bring both hands together, or at least I haven’t noticed him doing it yet.
Some of my favorite things that he does at this stage include:
1. Staring up at the light. I don’t know if he can even see it or not but he will just stare and stare at any light for like ever. 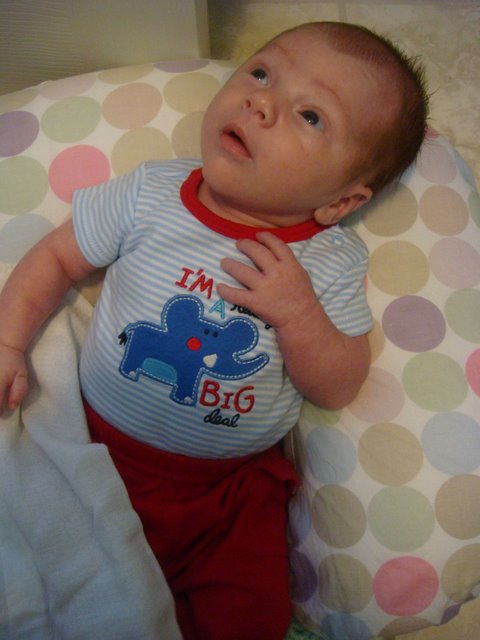 2. Smiling. He has the cutest little grin..and so many variations of a smile! It feels like such a PRIZE when I can get him to do it and even if I’m frustrated or upset it instantly makes me happier. Thing I do to make him smile: give him kisses, kiss/tickle his neck and cheeks, and dangle my hair in his face (the dogs love that too haha) 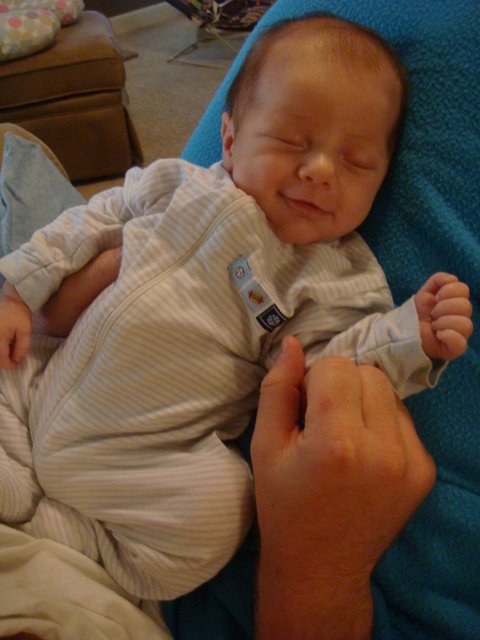 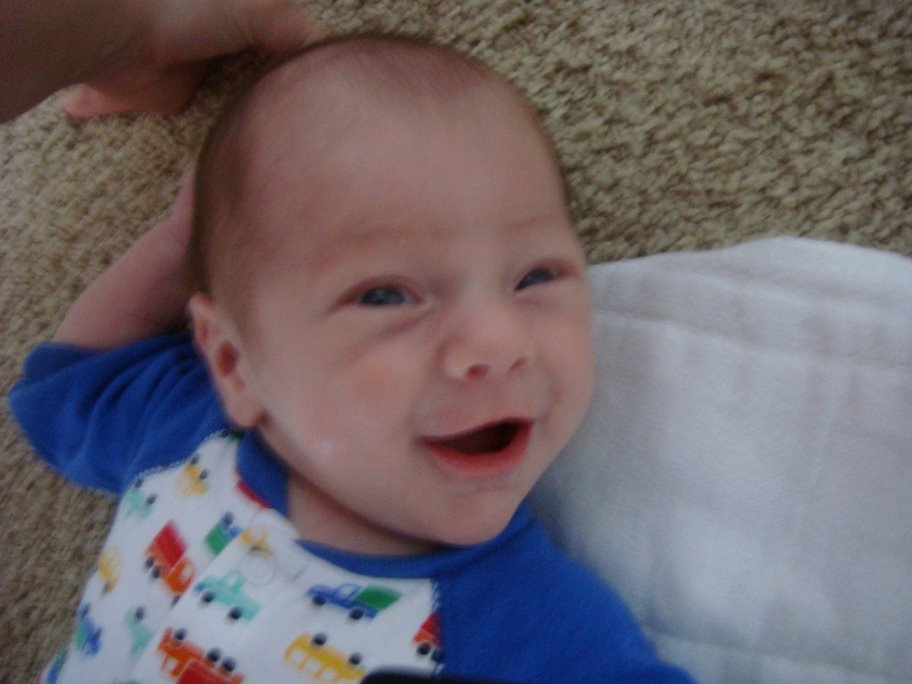 3. His discovery face. He puts his mouth in a little round oval shape whenever he’s discovering something new or focusing on something. It’s not that cute of a face but it’s a happy face. The one I don’t like is when he pushes his chin down and has a HUGE double chin!!! Yuck! 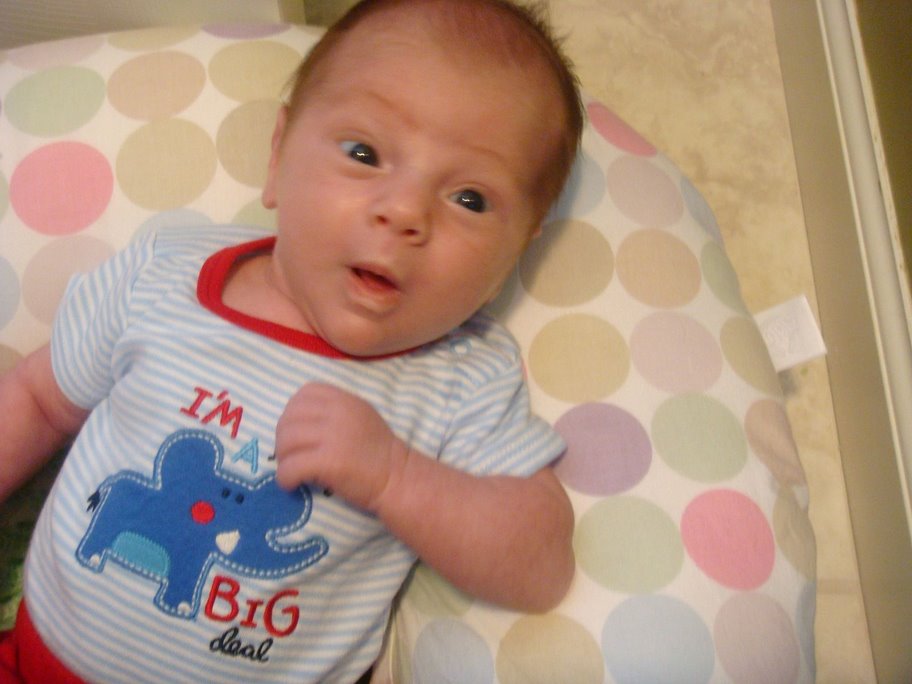 4. Cooing. He JUST started this yesterday and it’s PRECIOUS.


5. One eye. He used to do this every time he ate but not it’s more random. But he’ll just open ONE eye and leave the other one closed…so funny.


6. Bath time. He LOVES baths and is adorable when taking them. He acts like he could just lay there forever. Bath time is usually a thing he and Zach do so some nights I give him a baby massage and he adores that too. I think he takes after his mom and just likes to be naked haha 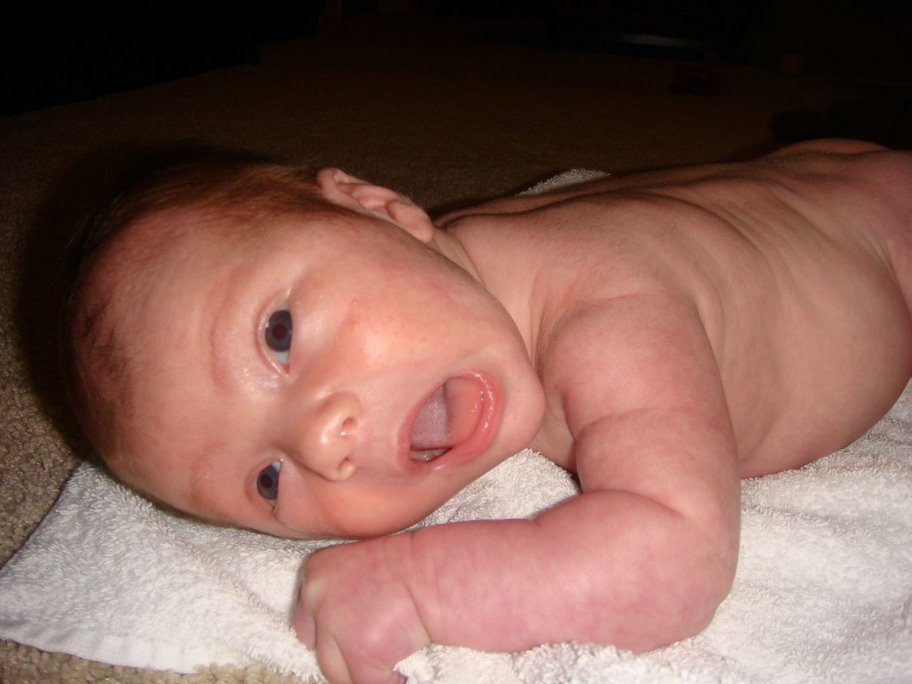 7. Tummy Time. We’ve had to do less of the tummy time recently because the reflux but I love when he gets frustrated on his tummy. I will move a toy to the opposite side that he’s facing and he will grunt and squirm but will eventually lift his head and move it to the side so he can see whatever toy it is. I like that he’s learning independence at a young age! I don’t help him at all but do congratulate him once he does it 🙂 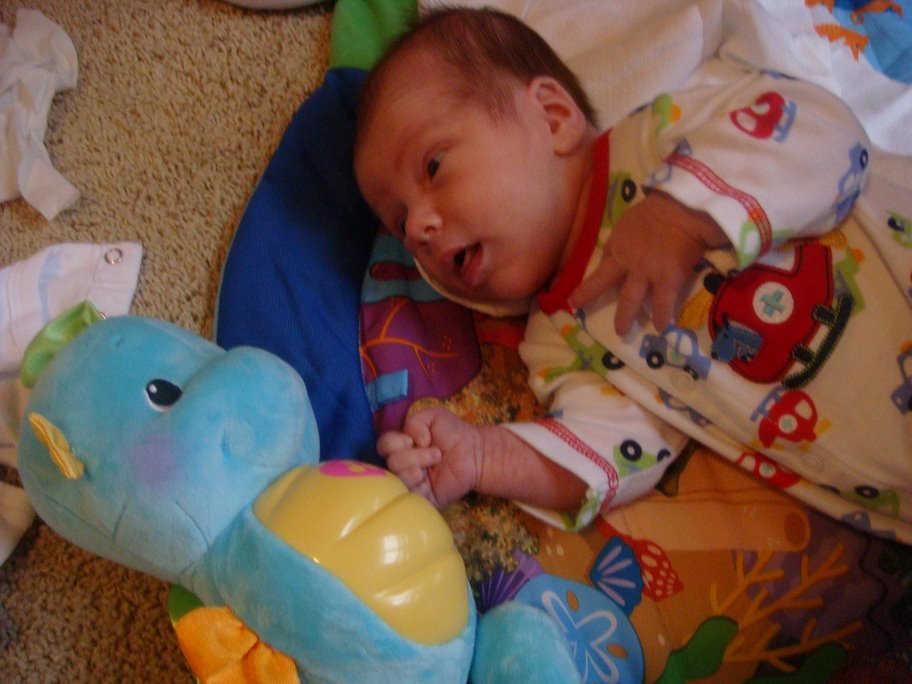 8. His belly button is also starting to go in which is a good sign!


9. Birth mark. I was kinda hoping our baby would have a little cute birthmark somewhere. I have a pretty big one on my side but it’s never bothered me (I think b/c my mom did a good job of always calling it a “beauty mark”) and Kye has one! It’s so little and right above his butt. It may go away but I hope not! 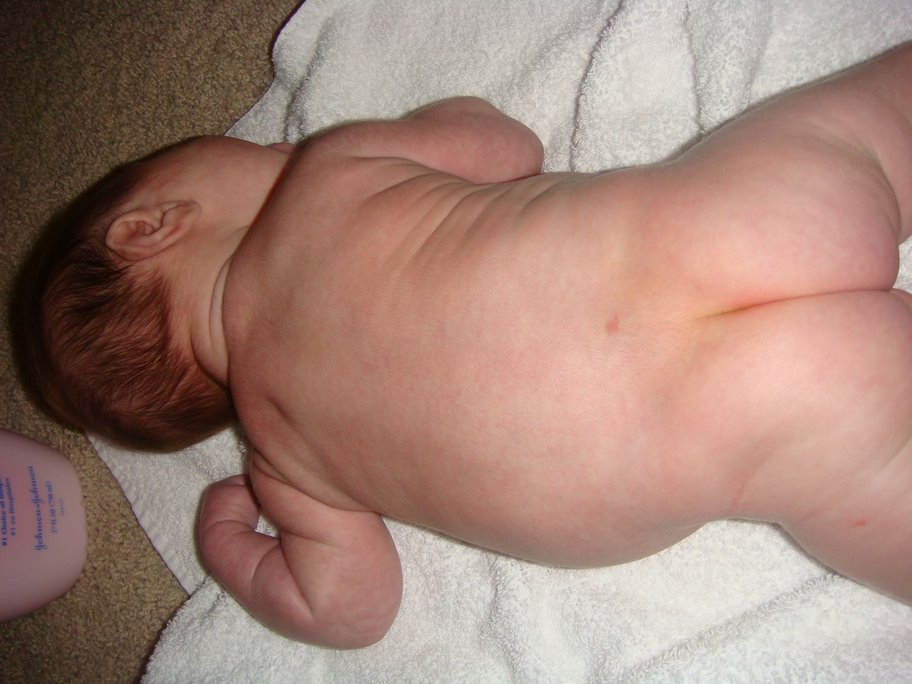 One thing we don’t like is that he has baby acne! Luckily, you can’t really see it too much unless he has a lot of light on him but it’s pretty bad! Little white heads and everything…but everything I read says not to mess with them so we haven’t!

He still has the hair on his ears and back but it’s become a lot lighter which is good!

We think it’s dumb to celebrate each month that he’s been alive so we didn’t do anything special to recognize the day. But I got to have some MUCH NEEDED ME TIME! Zach took Kye to his first football game! It was VSU’s Spring Game and Zach met Mr. Rusty up there with Kye to watch it. So Ashley came over and we got to lay out! I’m not confident enough yet to lay out at her pool so my backyard was where it was at. It was so nice not having to worry about Kye every second and just to relax with a good friend.

One thing that is great about having a boy is that I will get more alone time because Zach wants to take Kye to do things that he wouldn’t take a girl to do! Would he have been super pumped about taking our daughter to the Spring Game? Probably not! Zach had such a good time which is so precious to me and I know Mr. Rusty loved getting to be with his newest grandson too! 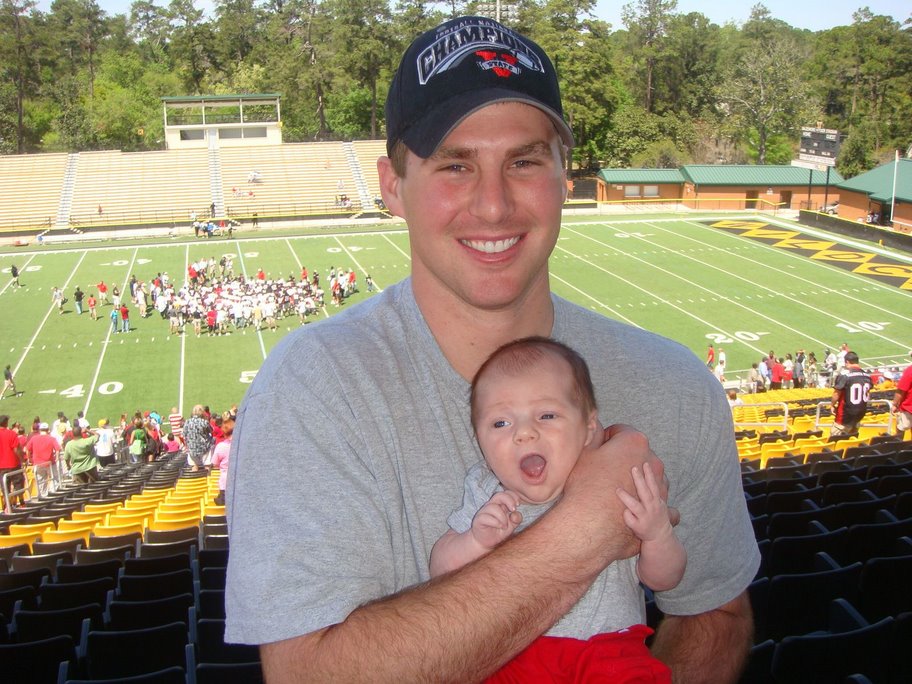 Mr. Rusty even got to give him his second bottle! (Zach was supposed to get pictures of him eating the bottle but of course he took a bunch of him at the football game instead haha) 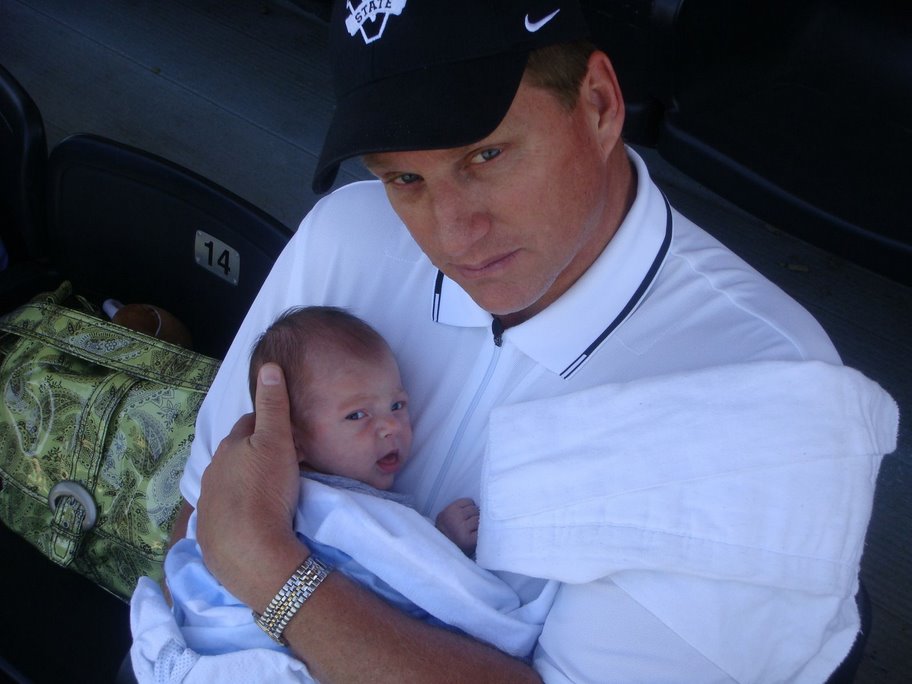 Getting to spend time with his cousin! Brad’s first time meeting Kye too! 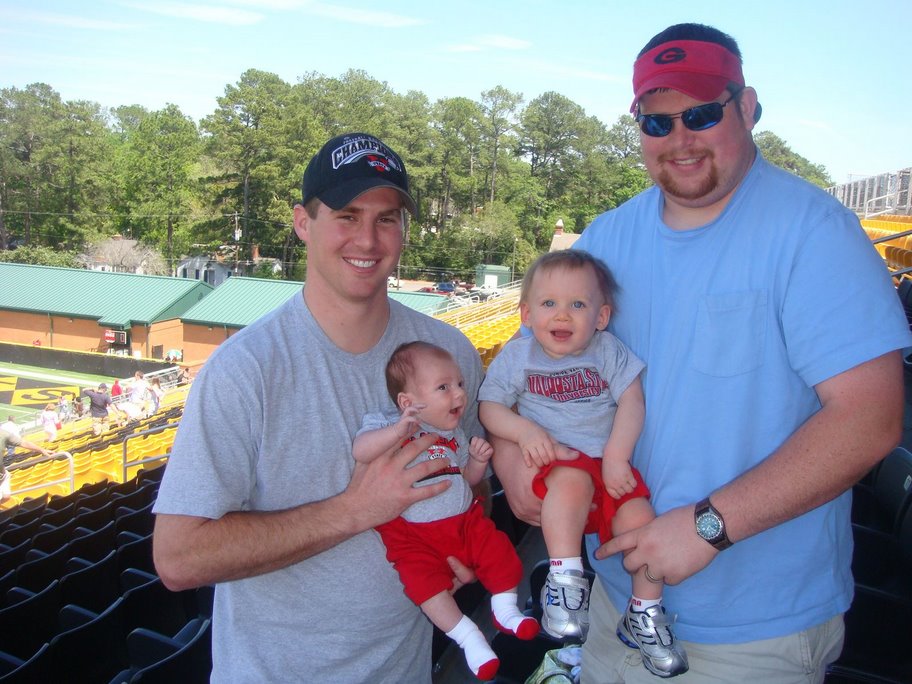