I wonder how well I’ll do with monthly summaries for Kye and weekly ones for the newborn? I did weekly updates for Kye for a loooong time then did two monthly posts each month covering his milestones and developments. LOTS to live up to for Blitzen huh?

Here’s what Kye was up to in October!

Big Helper: Kye has become a HUGE help around the house! Like I mentioned last month, he loves helping and I try my best to be patient with him and ask for his help. I know it’s important for him to learn to do things on his own and to have a servant heart. He is especially helpful with laundry. He will help me put the clothes into the washer, move them to the dryer, and sort them when they are clean. The sorting is his favorite part. It may take us 30 min or so to get the whole load sorted but we have fun doing it! I hand him an item and he puts it in Daddy’s bin, Mommy’s bin or Kye’s bin! Here’s a video! 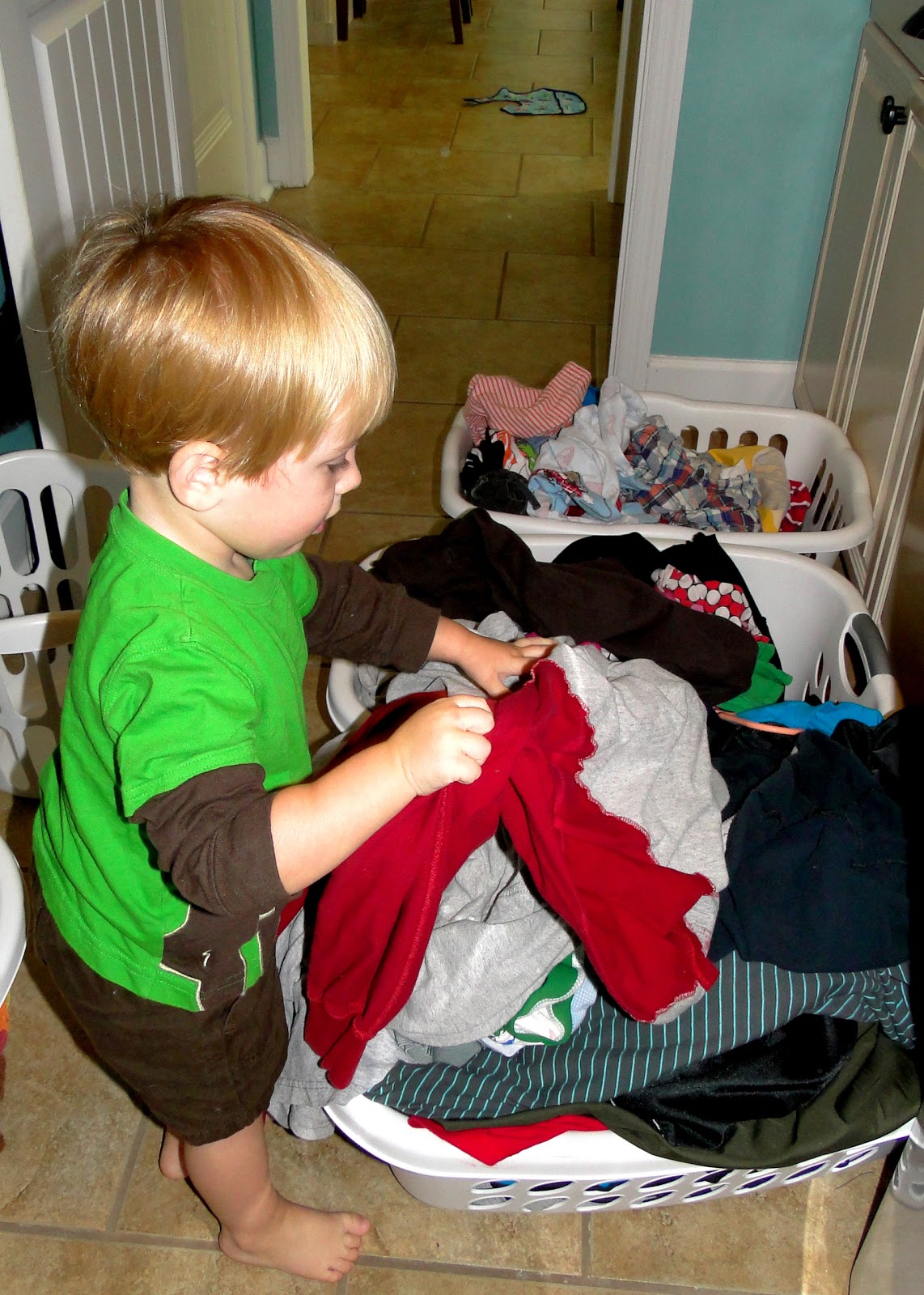 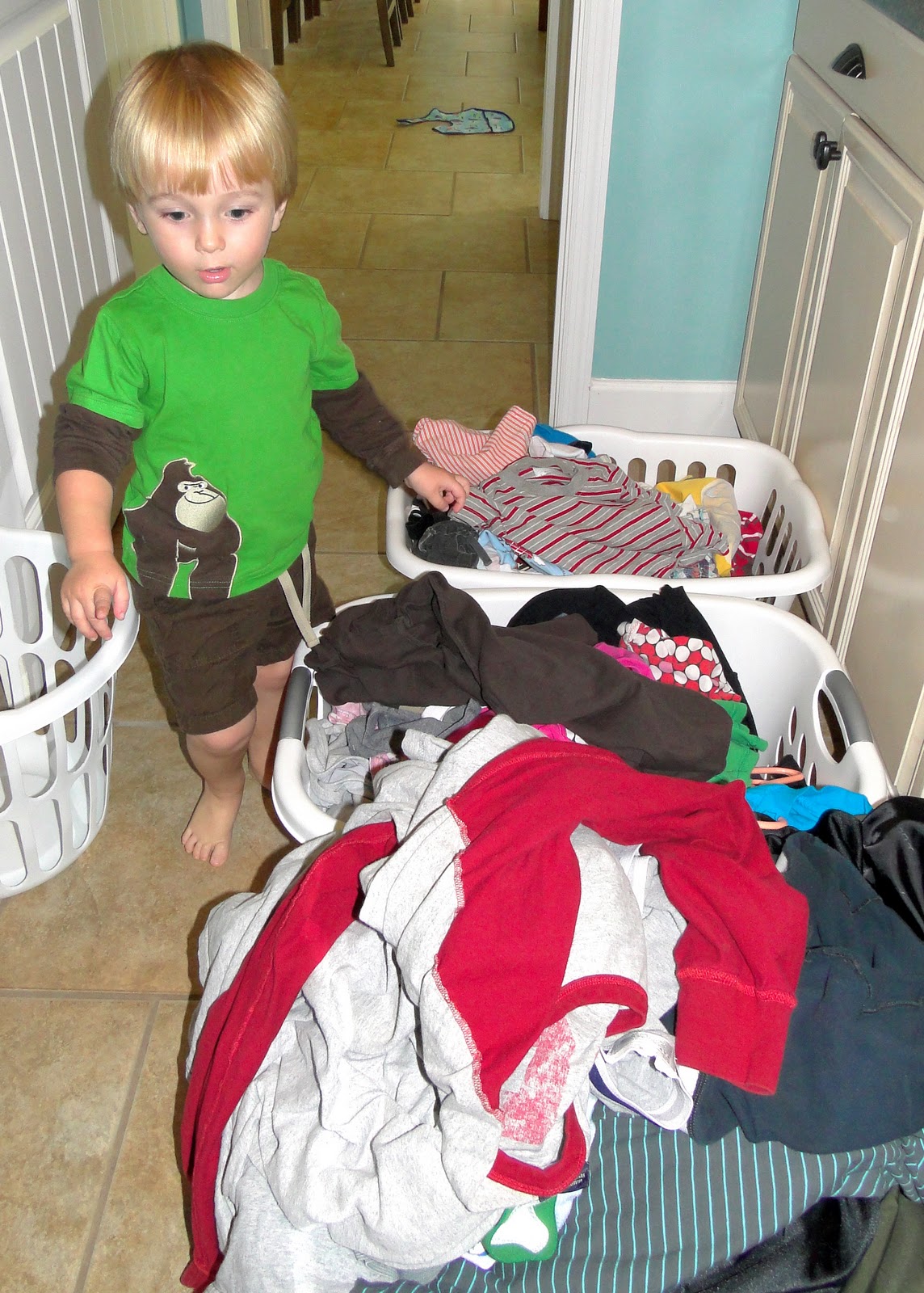 Since I’ve been working like crazy to make a bunch of frozen meals for us, Kye’s also become a HUGE help in the kitchen. He enjoys stirring things and pouring things. He is a big help when keeping count on how many scoops of such and such we need to add too! Here we were making some Sneaky Chef cookies and he was helpful in licking the bowl 😉 In this video he is sorta helping me getting ready to make some cookies…but he’s also singing his ABC’s and showing off a pretty impressive tennis swing! 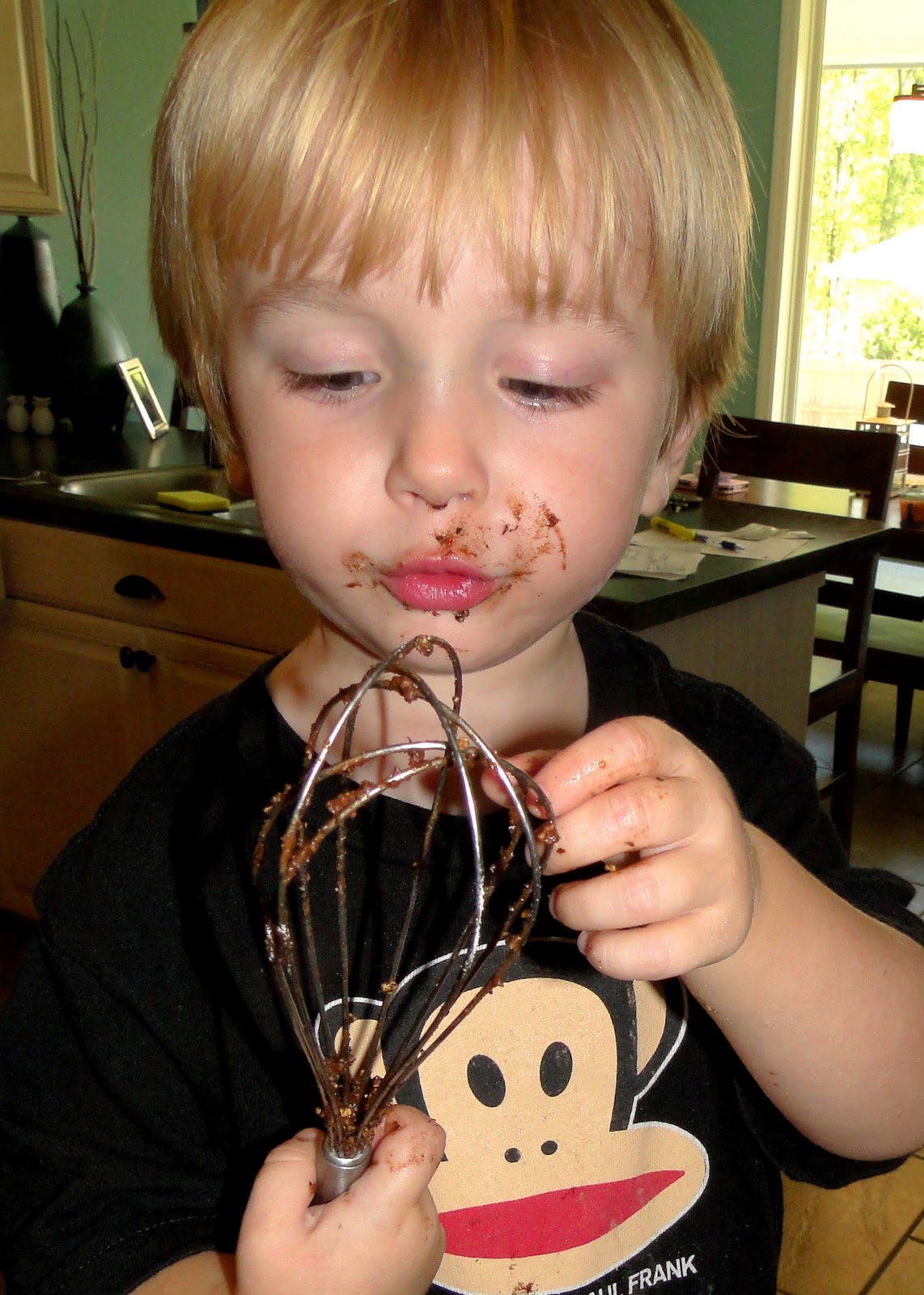 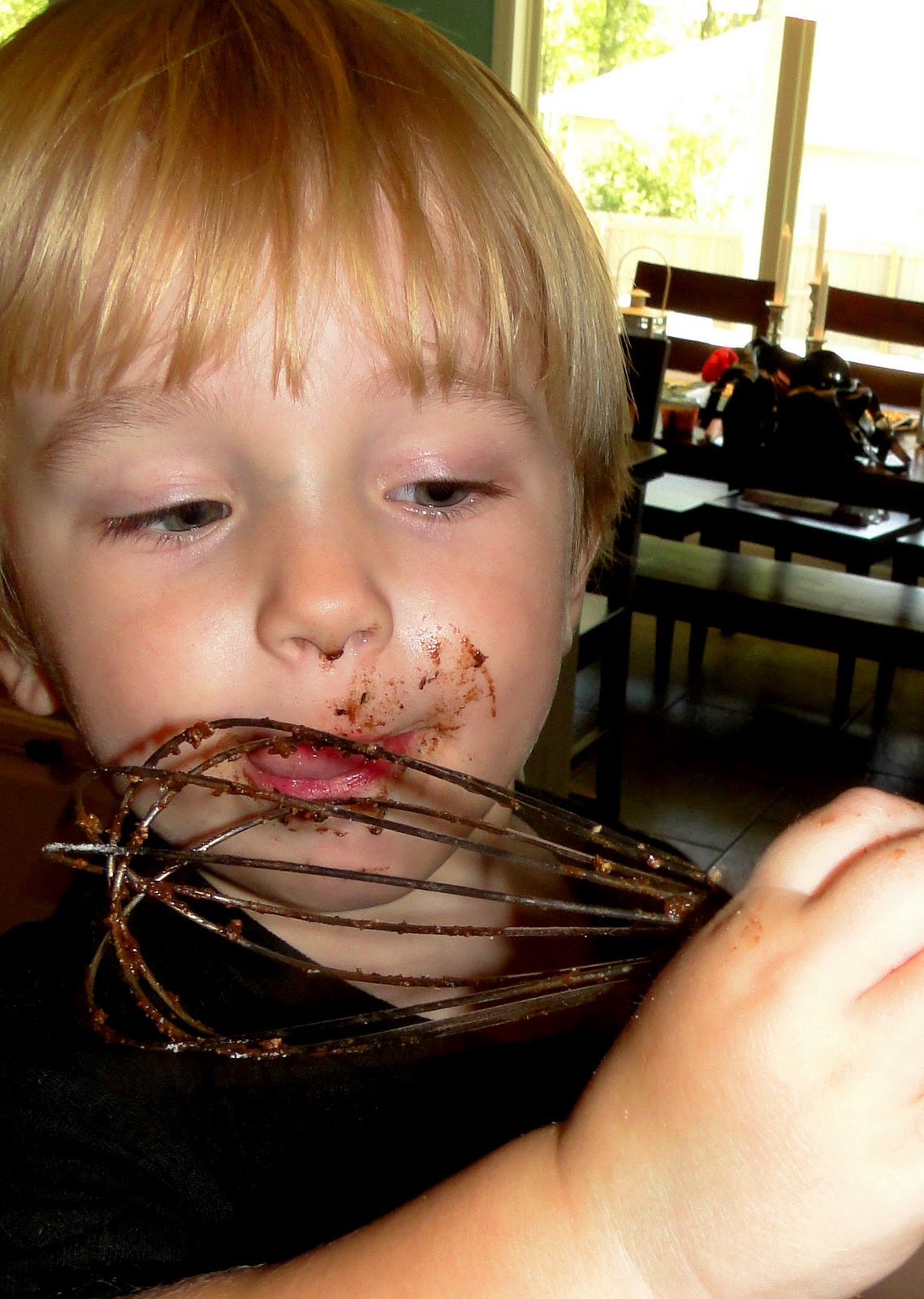 Boys/Girls: Kye surprised me one day by telling me EVERY SINGLE person in our family and their sex without missing one. Including our pets! He knew all the boys and all the girls! I took this video of him and wanted him to do it for me again and, of course, he got silly getting them wrong on purpose. It’s still so precious to me though that he’s developed a sense of humor and will say things wrong on purpose to get a laugh!

Hiding: Oh how Kye loves to hide! I think he’s always loved it and the older he gets the better of a hider he becomes. He will count to ten (and say “amen” once we reaches 10 which is hilarious) and come find us and he’ll also run and hide (often in some good spots) when we count. Can you even see him in this picture???? Here’s a video of him rolling around and playing with his “friends.” You can tell he’s all boy!!! 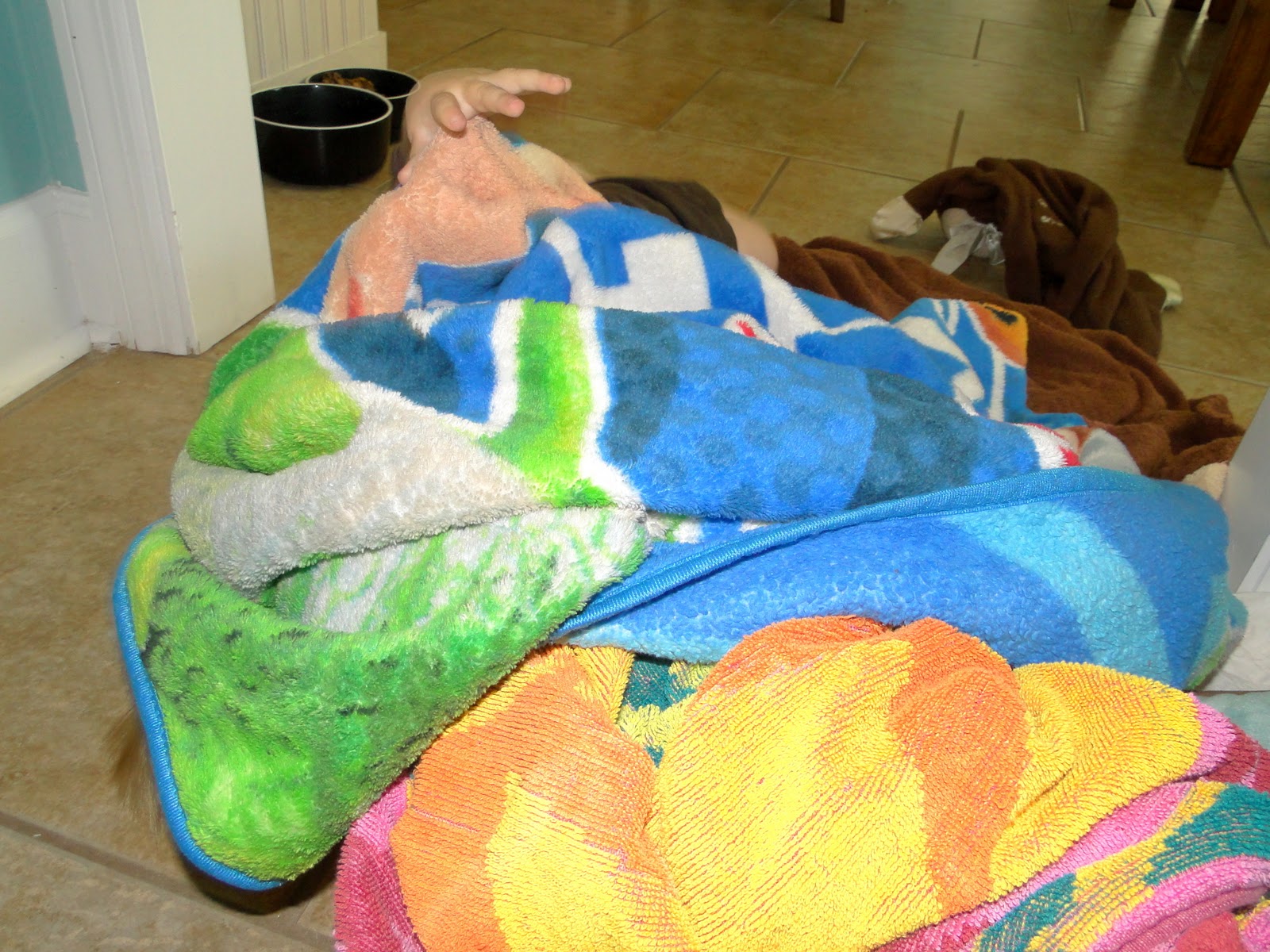 Prayers: I think we ALL have a “go to” prayer we’ll often say and it can become routine to say the same thing over and over again. Kye’s gotten in the routine of always saying the following prayer: “thanks Mommy, thanks food, thanks beach, thanks pool AMEN!” Pretty much every time I try to then tell him to talk to Jesus some more and say more prayers as I want him to understand that it’s a relationship not just a one way little speech you say. Here’s a video of him saying some prayers (and yes, Crissy, you get mentioned again!) He also prayed about a “Christian Flag” and I had no clue what he was talking about until I visited the chapel at his school and they actually recite a type of anthem thing to some Christian flag?? I’m not a big fan of that…

“I want”: A phrase I’m hearing quite often now is “I want.” It aggravates me to no end! I have NEVER bought him anything at a store so I don’t know where he even got it from? Plus we don’t watch ANY tv so he doesn’t even see commercials!!! Ever! I’m thankful for Santa as my response (yes, even back in Oct) is simply “okay we’ll be sure to ask Santa for that.” It works just fine and he’s never pitched a fit or anything over something he wants and doesn’t get. He also loves looking through catalogs that come in the mail and will literally point to every. single. item. and say “I want that…I want that…” etc. 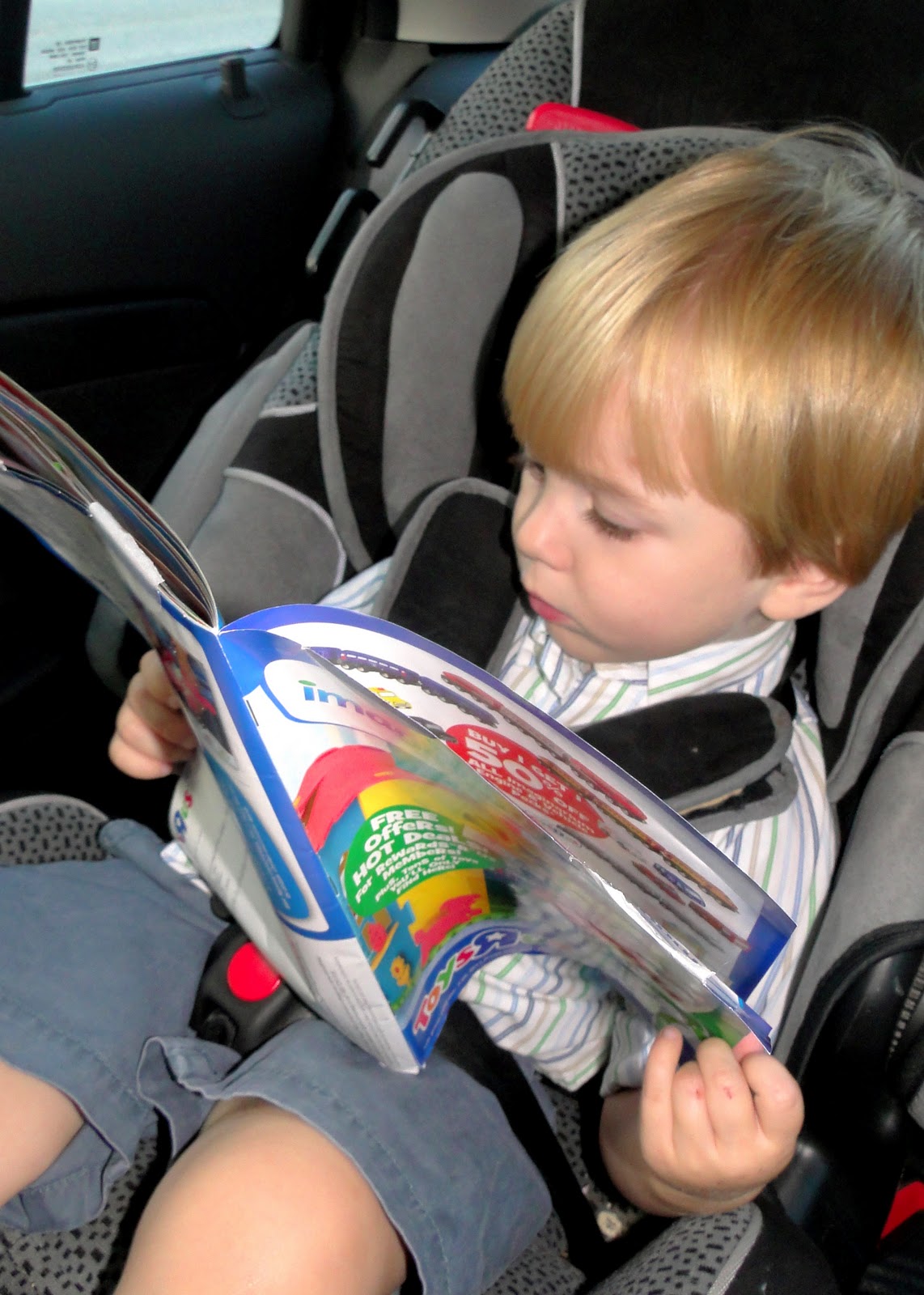 Pout Faces: As he gets older, it’s natural for Kye to have more opinions and to be more upset when he doesn’t see eye to eye with us on things. He is mastering a pout face/evil eye and a lot of the time an action will follow that ends with him having to get a spanking. He’s at that age where he isn’t quite sure how to express his feelings without acting out. I’m working with him on talking through things but it’s hard for him to understand that concept right now so often it’s an evil look, a poor choice, a spanking, an apology and we move on. 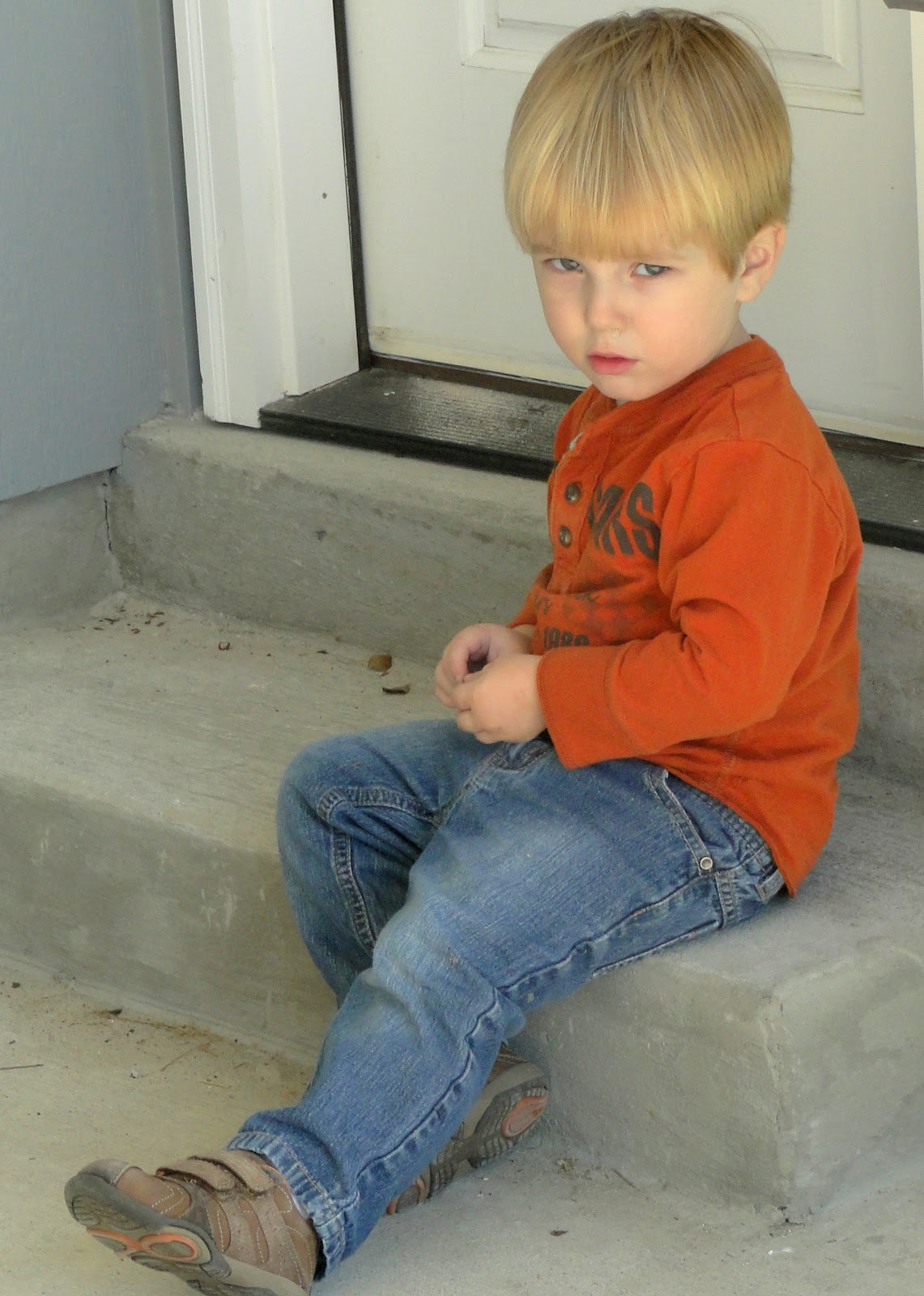 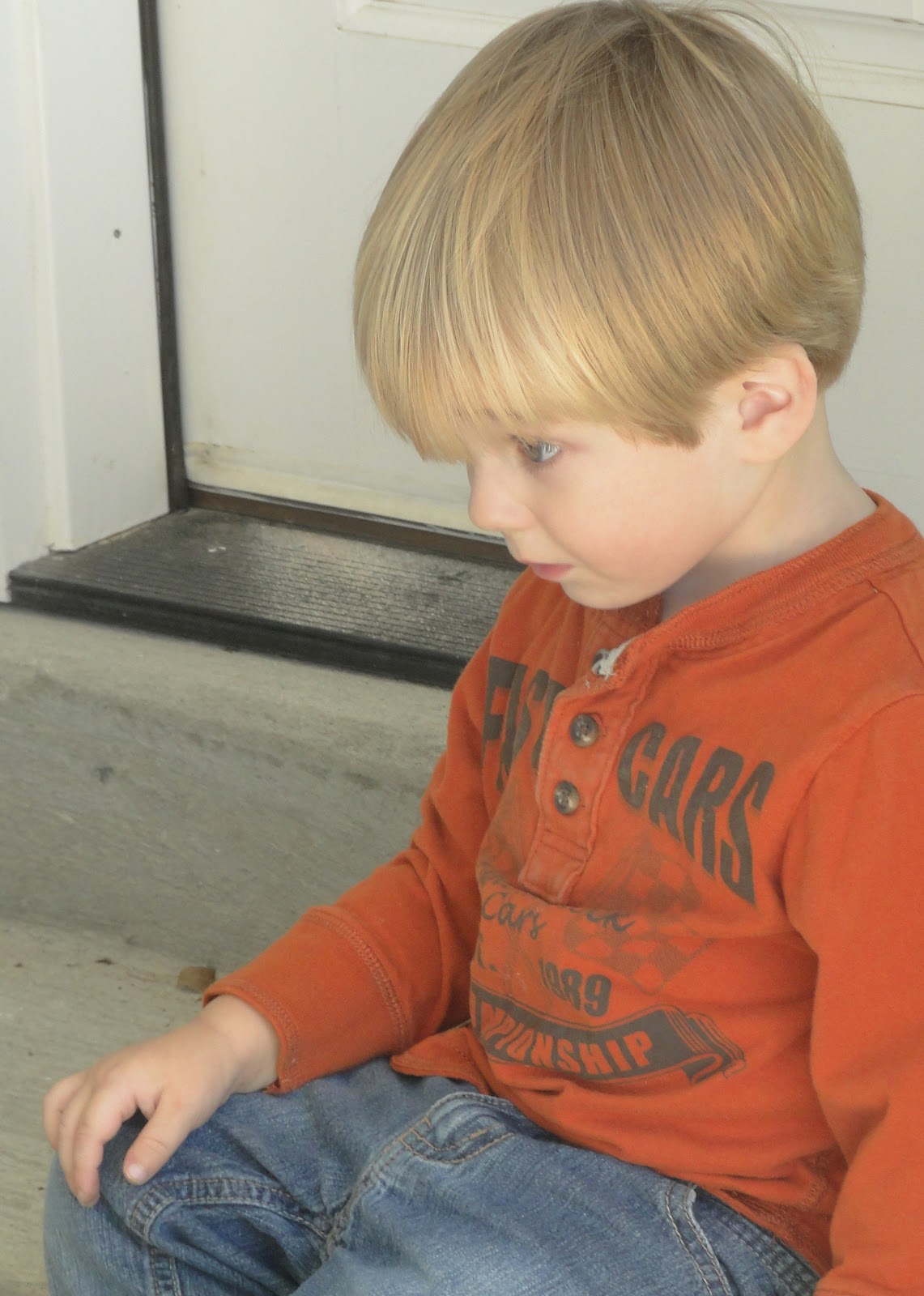 Independance: Zach has been working with Kye in the bath tub about bathing himself. Here’s a video of that (no worries, privates are not in it!). We have also been working with him about going to the potty on his own. Once he moves up to the 3 year old class at school next year he will have to be able to pull down his pants, pull down his underwear, use the bathroom, then pull it all back up on his OWN. Isn’t that kinda crazy? We’re trying to start teaching him now so the transition will be easier for him and I’m so proud of how well he’s been doing with it!!! He’s actually pulled up his own pants a few times which is a big deal!

Waiting by the Door: One night we had Lorelai and Robyn come over and I told Kye Lorelai was coming so he literally sat in front of the door and waited for over 20 min for her to get here!!! He’s done this several times since and it really is so sweet. Here’s a video of when he waited for Lorelai! 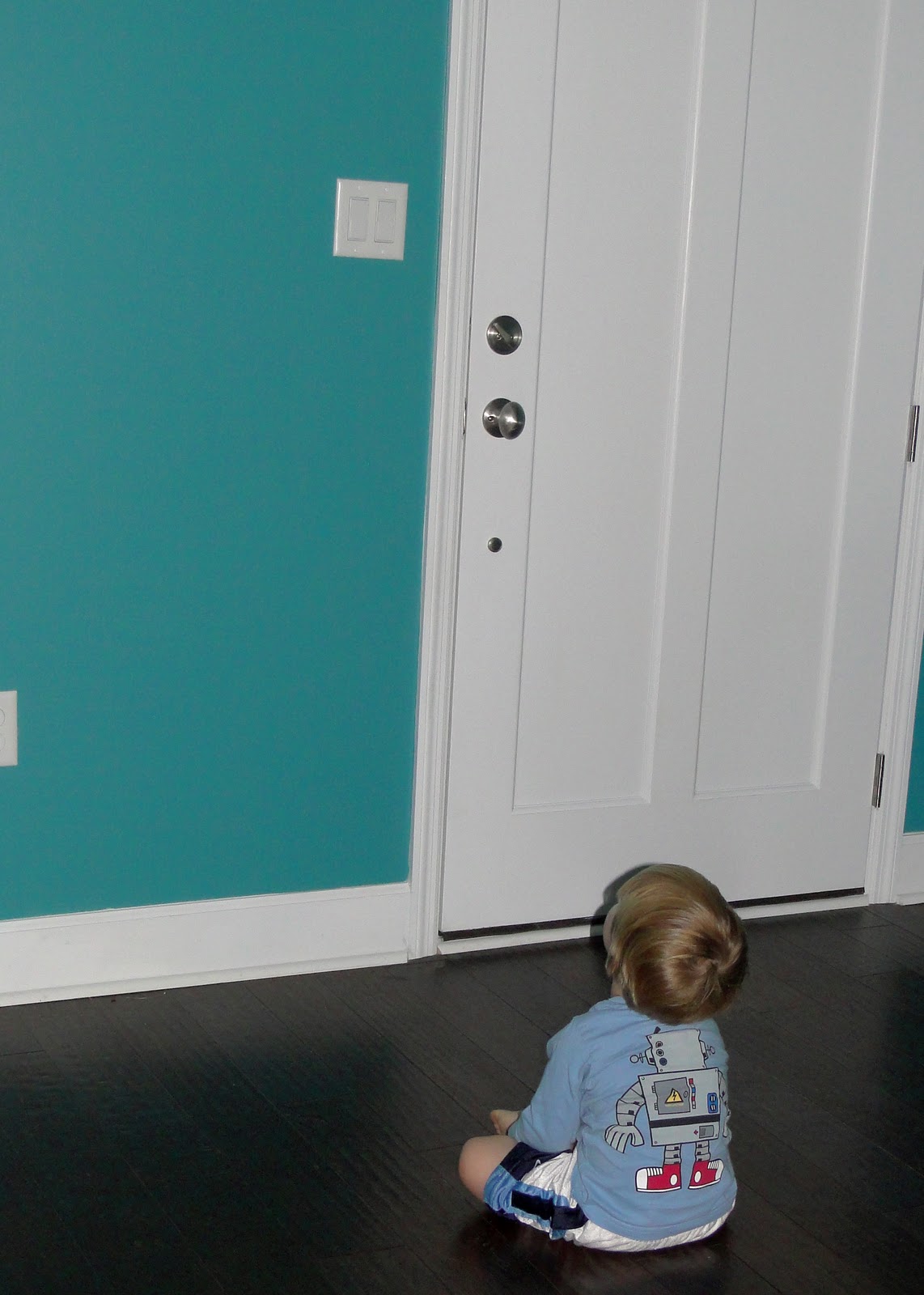 Pretend: Kye is now the king of pretending. It’s great to see his little imagination at work. He will tell us long stories that are in no way true. A man climbed a tree and it fell over (sometimes an alligator or a lion or a bear climbs it too) and there are lots of stories about sharks. We often pretend that a shark is chasing us when we are in the car and he’ll want me to make shark sounds and we have to whisper so the shark won’t hear us. He also will make everything come to life. Meals take much longer because his fork now talks, along with his milk and often his food too! It’s cute to hear him make all of his toys talk as there is usually common themes in his playtime stories…toys will misbehave and need spankings, they all LOVE Chick-Fil-A, they attend church services quite frequently, and they are often missing their sons and have to find them.

With this toy he asked if he could bring it down after roomtime and I said sure…and the rest of the day he pretended to be eating the food out of it. Throughout his whole movie time and everything. 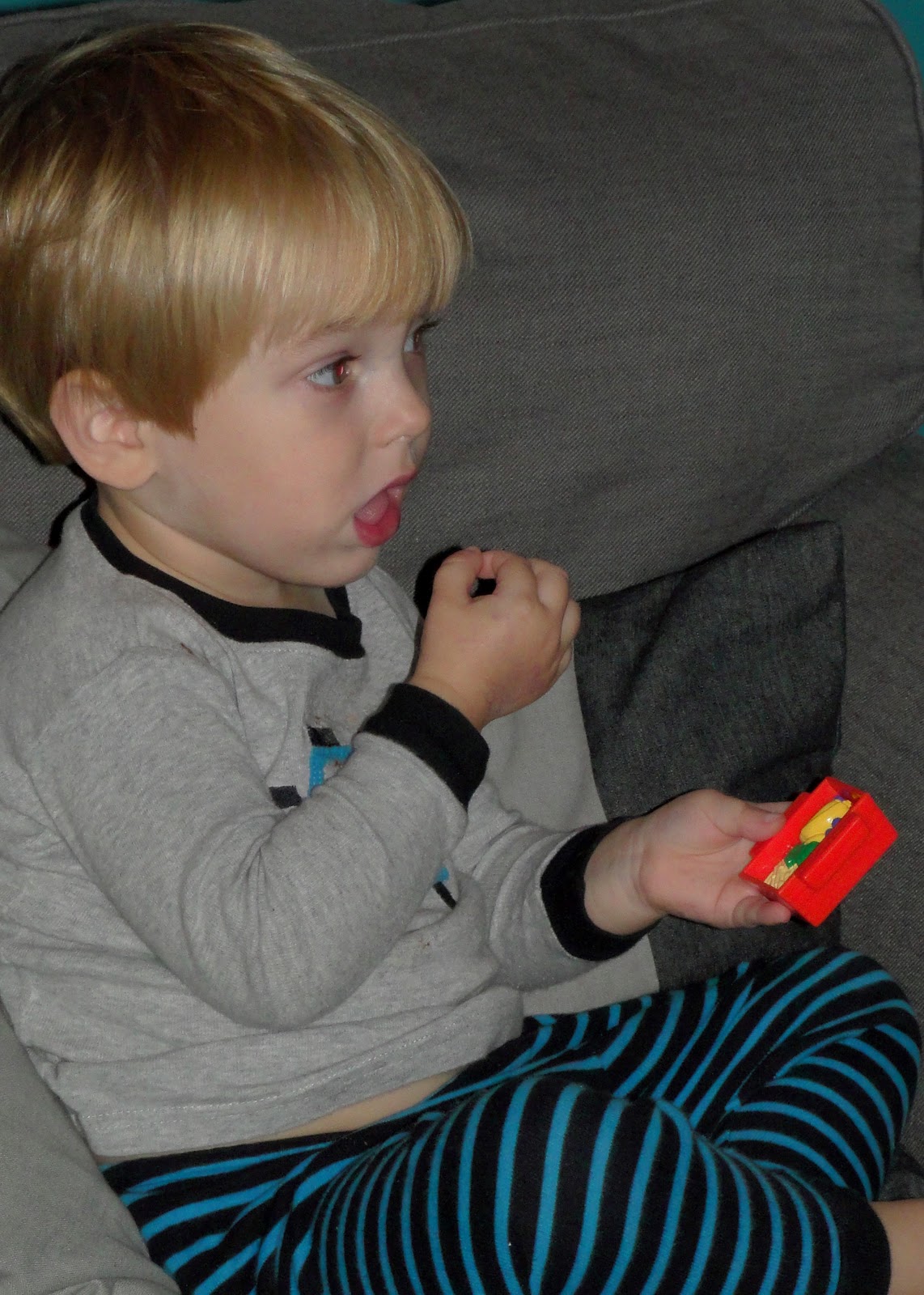 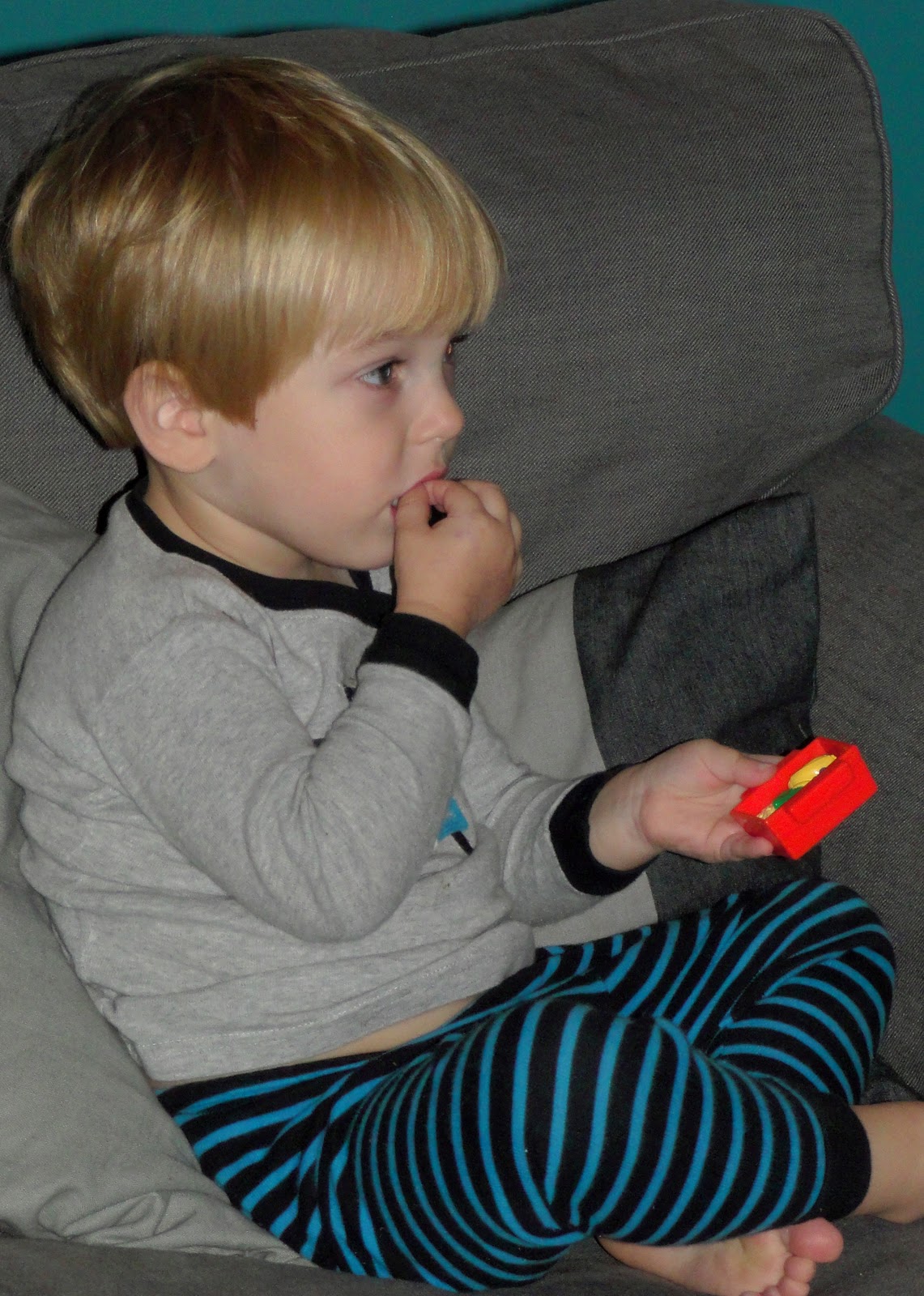 Here’s a video of him talking to his little Brio people (which were actually mine as a kid!!!) 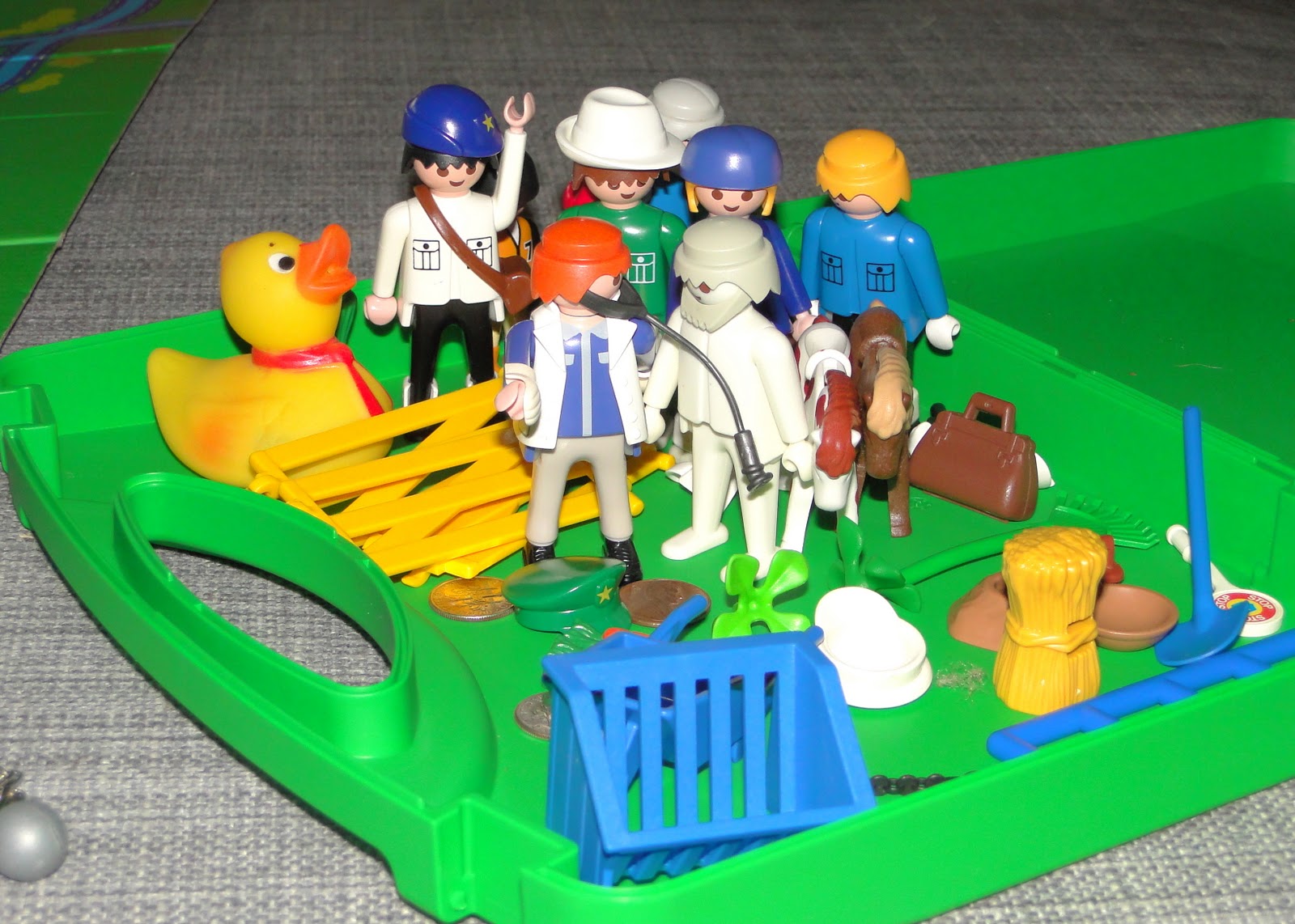 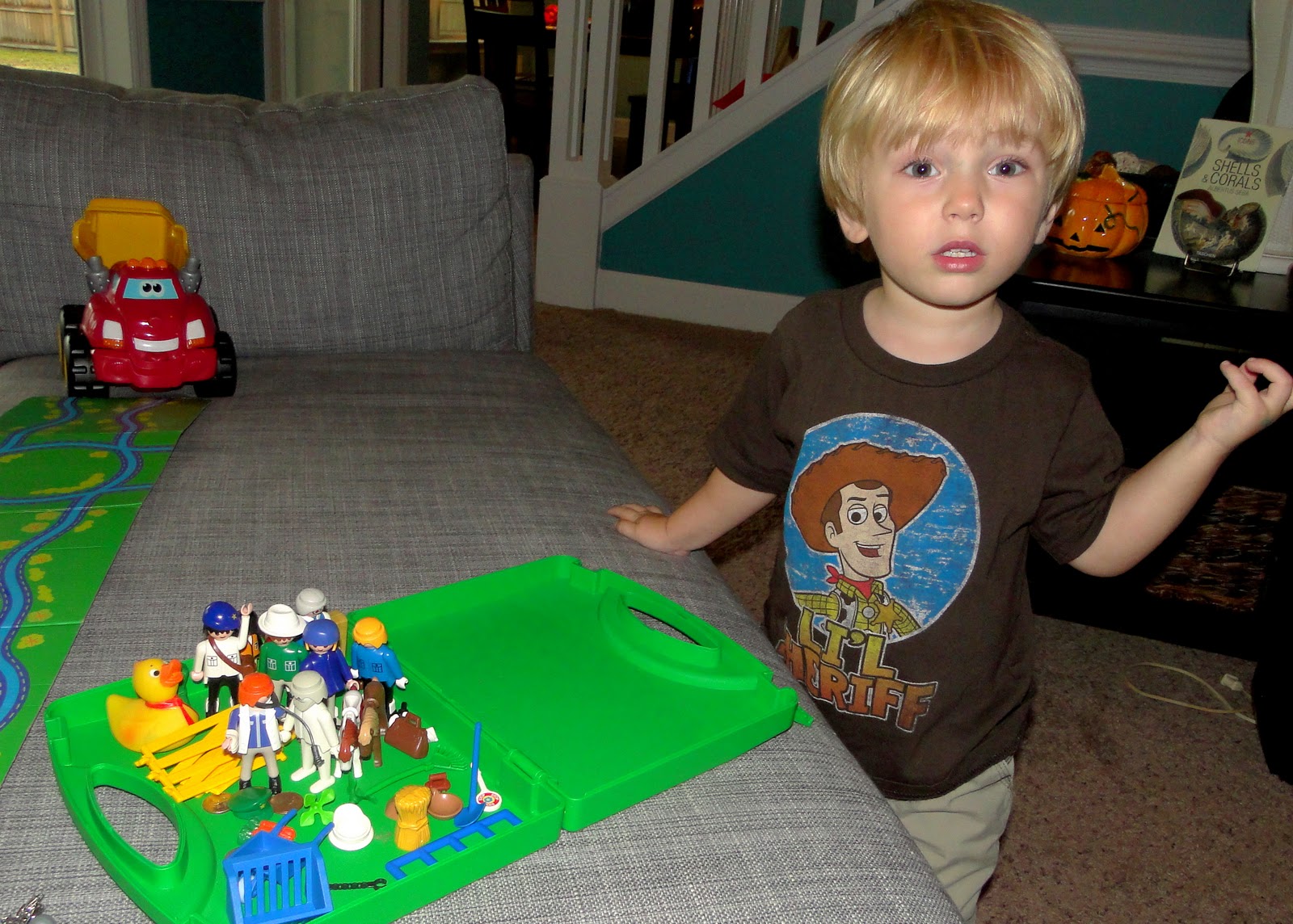 Getting Ready to be a BIG BROTHER: I continue to be impressed with Kye’s excitement over Blitzen/Isis. He LOVES to play in the nursery and to pretend his stuffed animals are babies. Now that more of the baby things are in the nursery he spends even more time in there. It’s good for him, I think, to be exposed to all the baby things and learn his boundaries with them. Here he wanted to put his baby monkey “night night” in the swing! 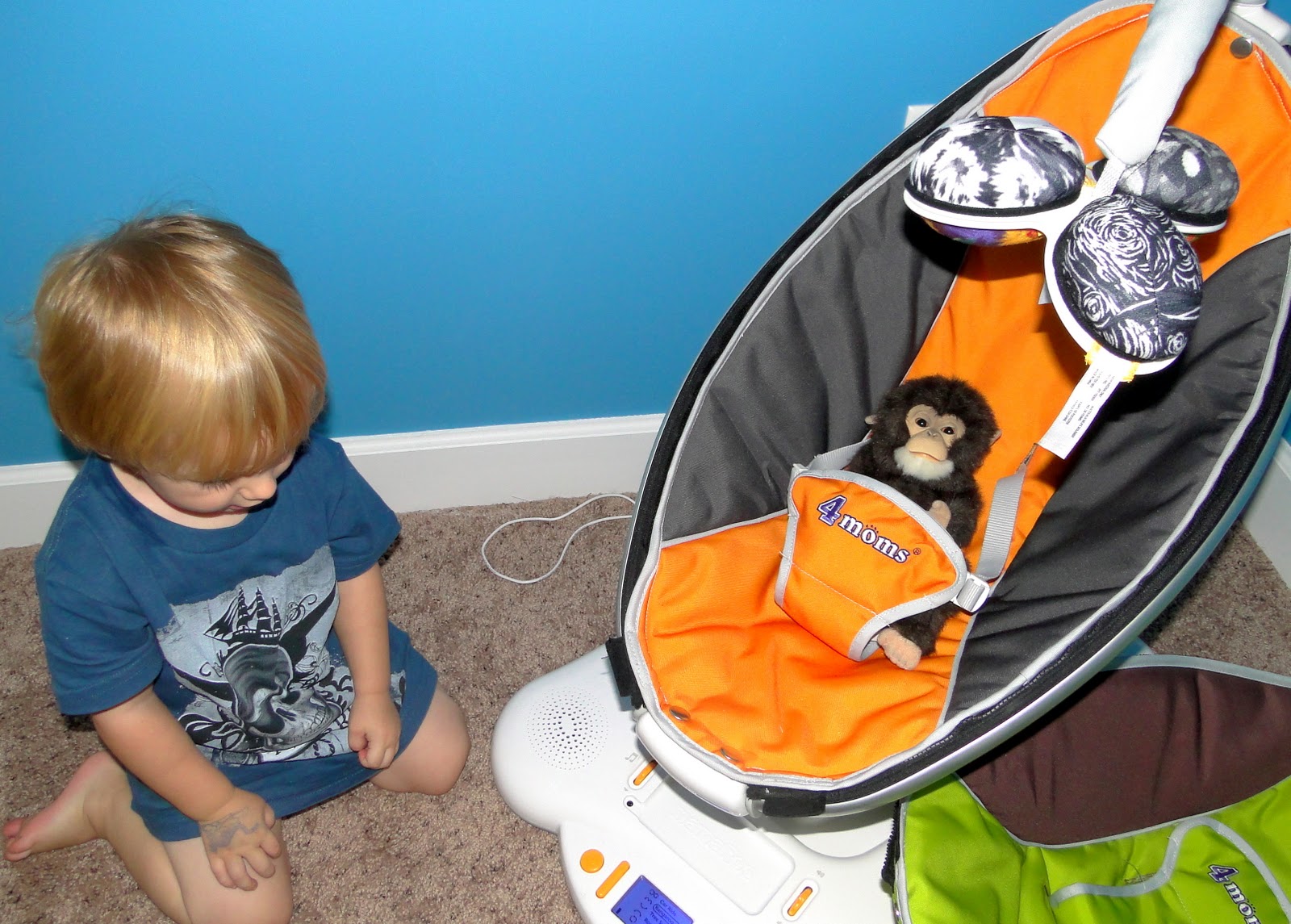 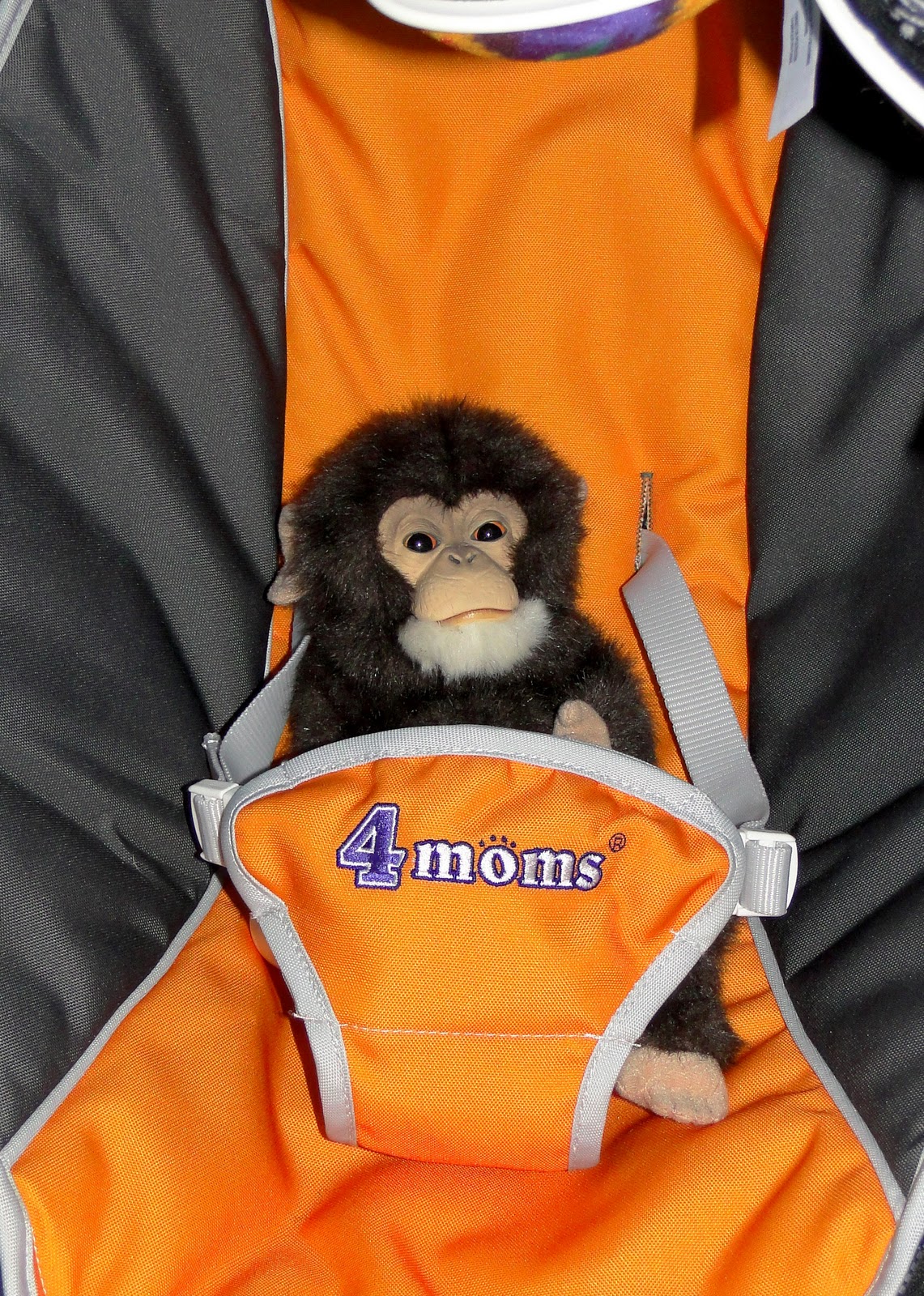 Football Team: Down here football is KING. People make a HUGE deal about the high school teams and it’s legit rivalry. Like when they play each other there will be like 30,000 people in the stands. No joke. To me, it’s a bit ridiculous and I wish the town would put more support into our great college football program. I remember sitting in the stands watching a 2-time National Championship team and having next to no one in the stands with us. When Kye’s school had spirit day to wear their favorite team shirt (meaning either one of the high schools) I put Kye in a VSU shirt to support the Blazers 🙂 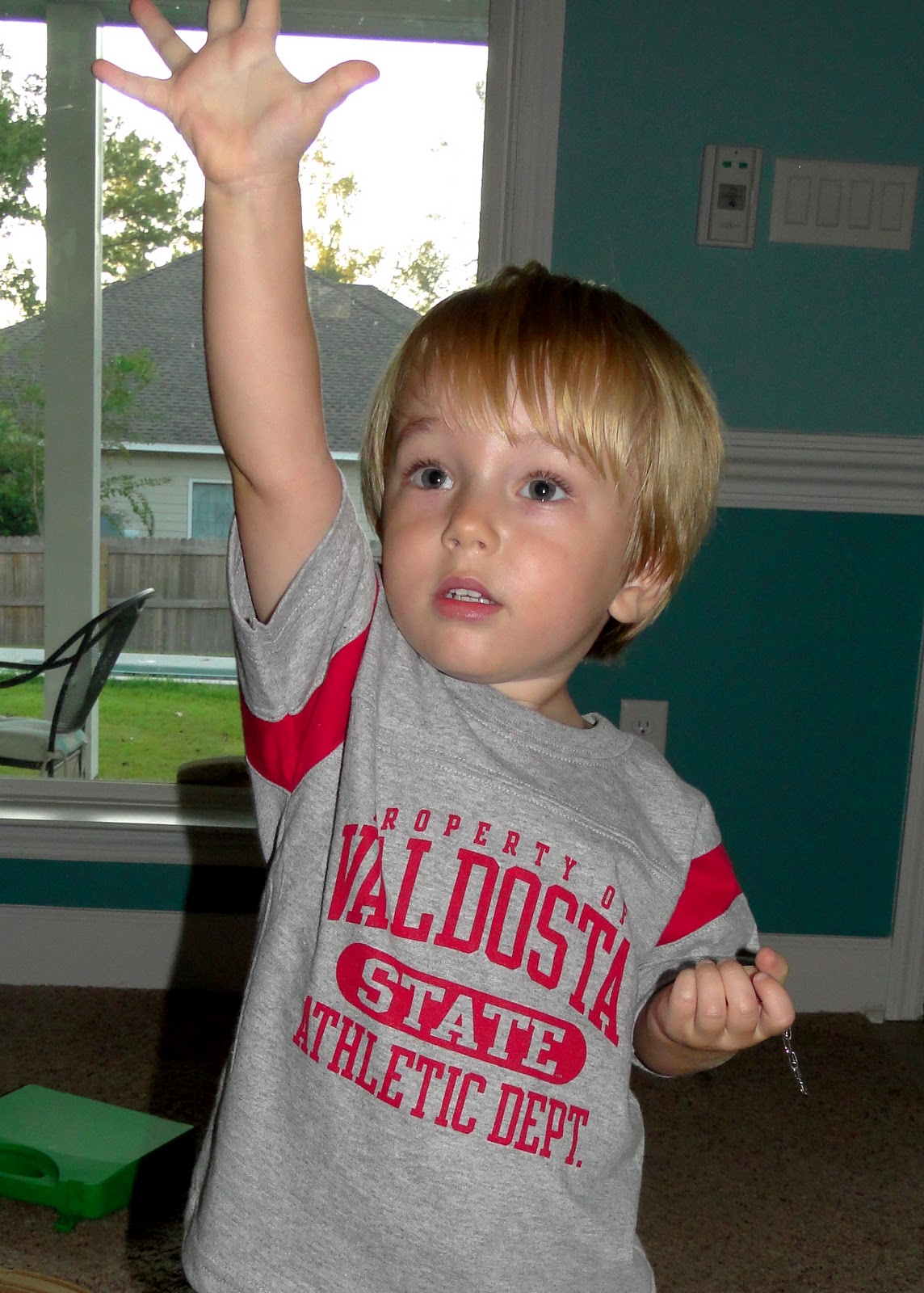 Muscles: I LOVE that Kye’s school teaches Bible stories and thought it was the CUTEST thing when they learned about Samson and his big muscles. Kye got in the car and was SO proud of his “muscles.” He did NOT want to take them off! Wasn’t this an adorable idea??? 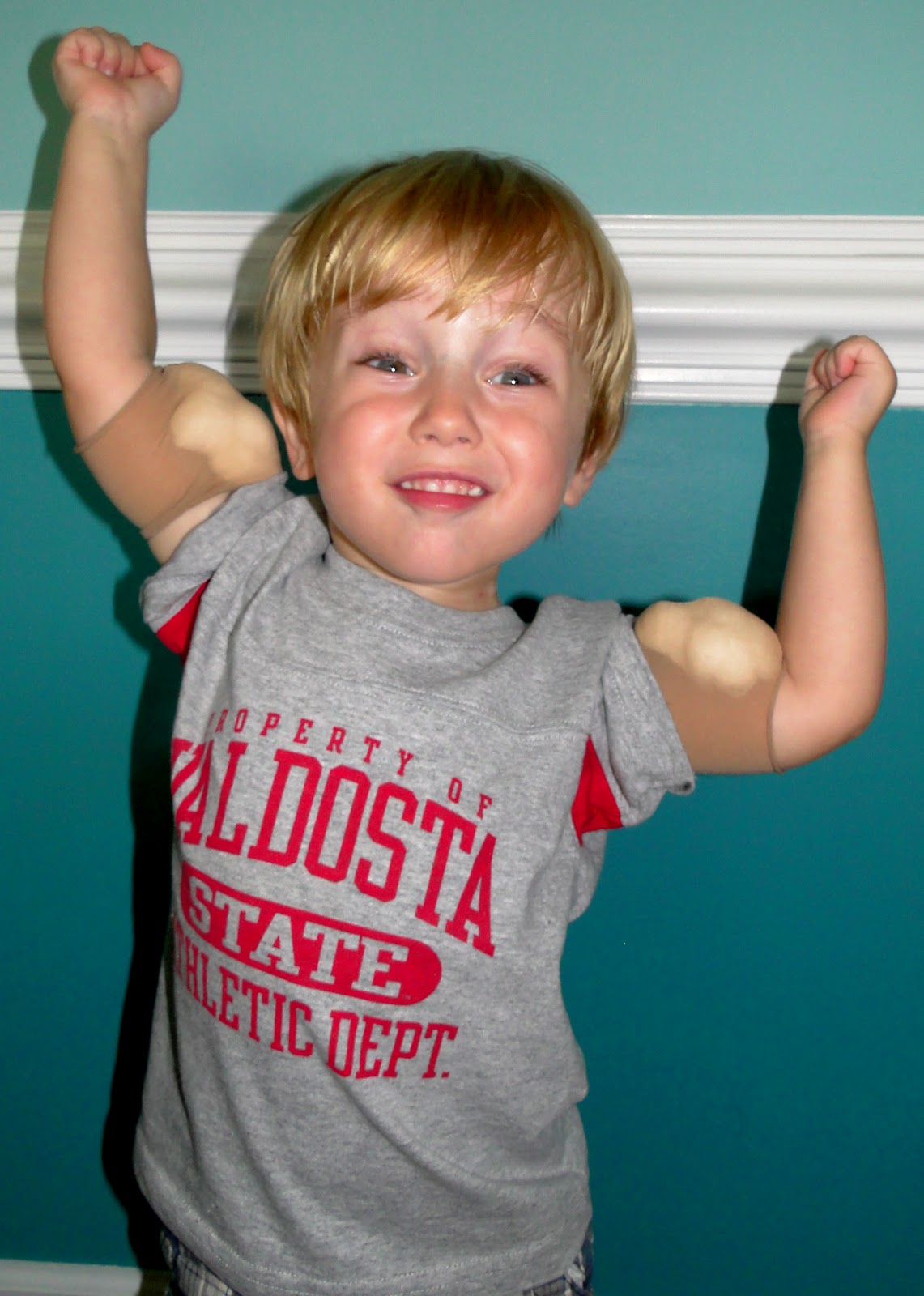 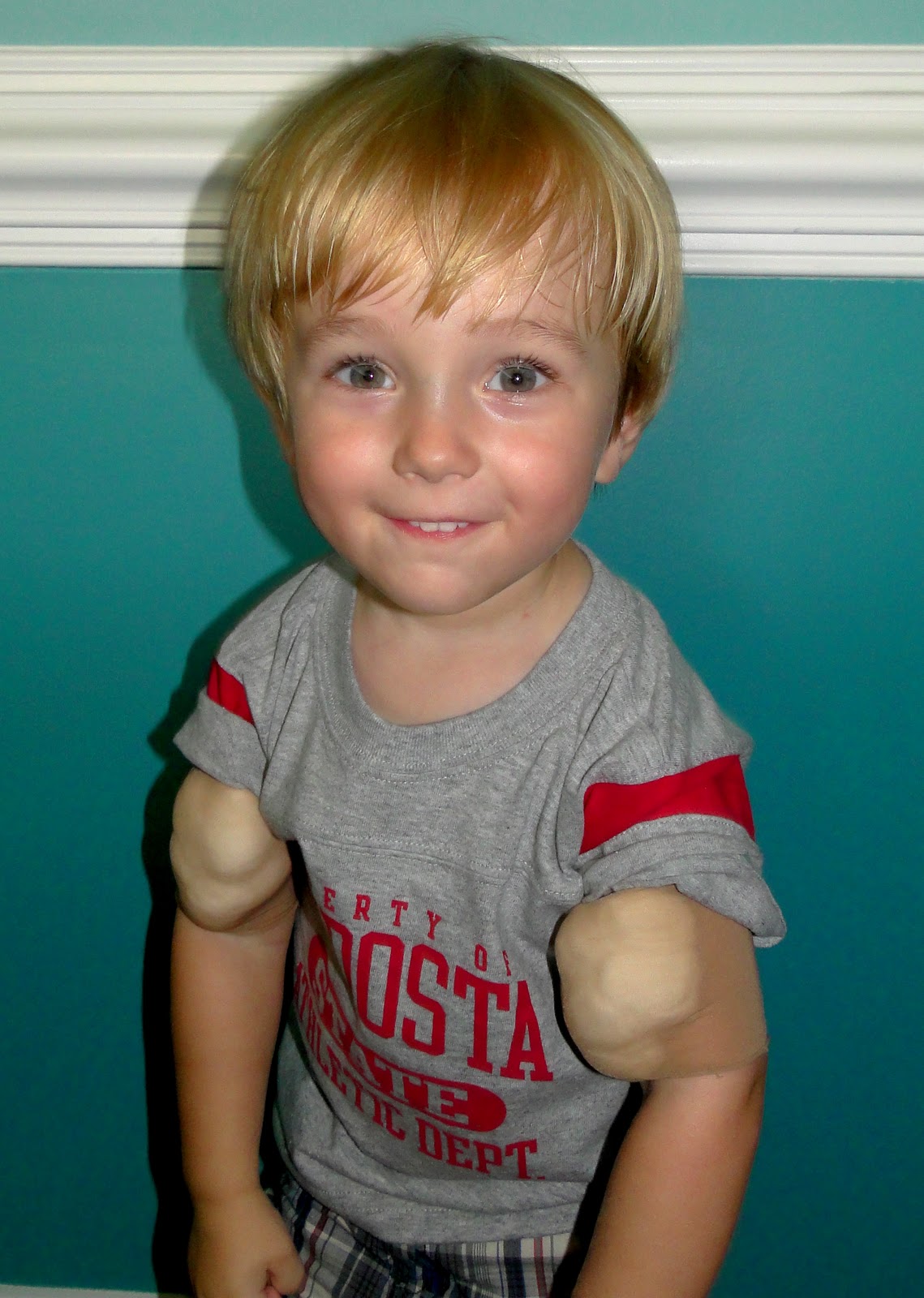 Play Food: During roomtime right now Kye’s favorite thing is playing with the play food from his grill set. He LOVES “cooking” for Mommy and will want me to stay up there and play with him when roomtime ends! Here’s a video of Kye with his food. 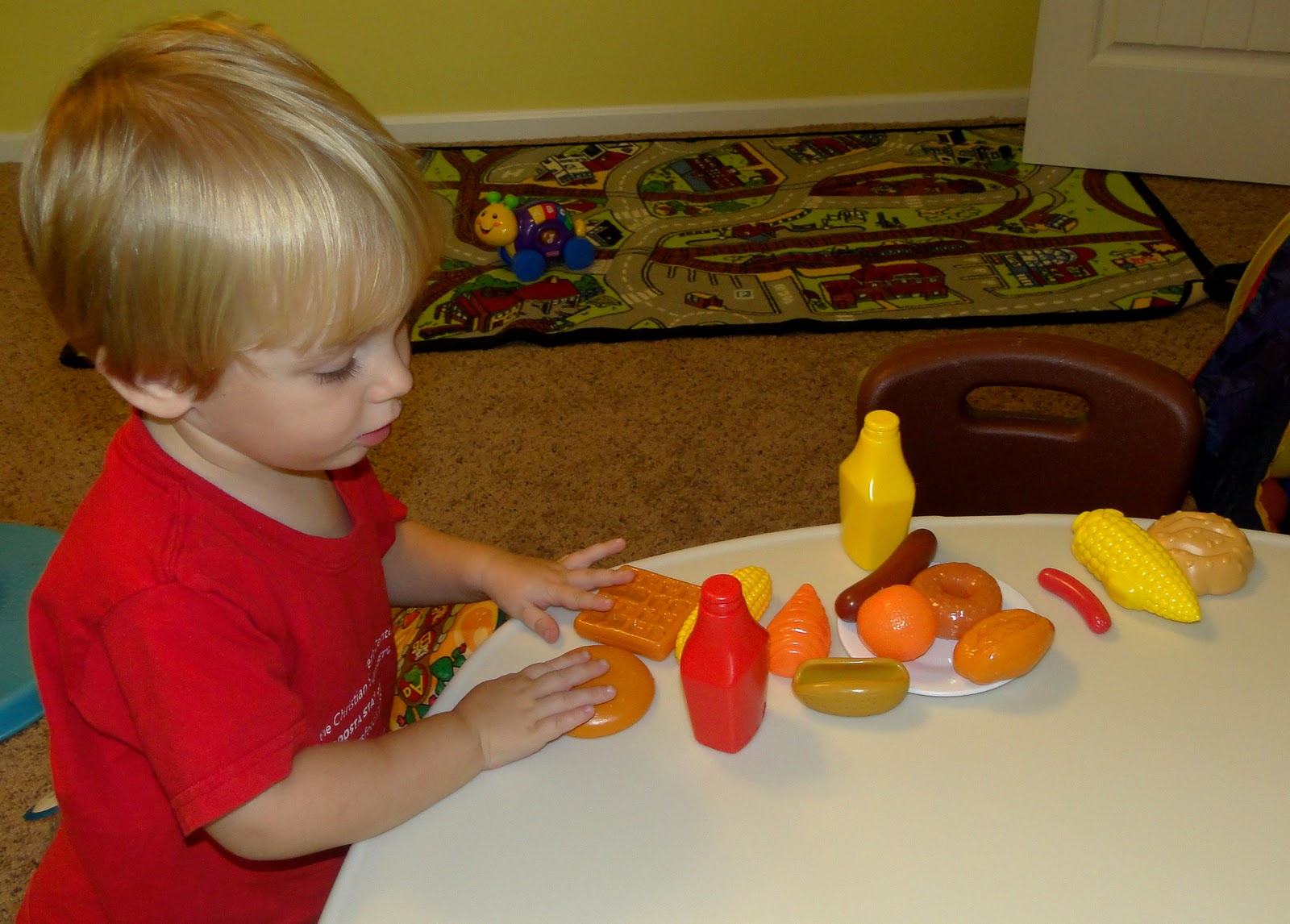 Smiling for Camera: I’m SO SO SO happy that Kye will no only look at the camera when I tell him to but he’ll also SMILE for me AND often ask to have a picture taken! Um, I’m in HEAVEN! Sure, his smile isn’t always the cutest one ever but it’s such an improvement of having to do everything in our power to get his attention our way! He also enjoys having videos taken of himself and especially enjoys watching them! This video shows Kye reciting his first memory verse! In this video he wanted to do it again so he could watch it. And AGAIN in this video!

Kye got new pirate pjs and actually asked me to take pictures of him in them! I’m loving this for sure 🙂 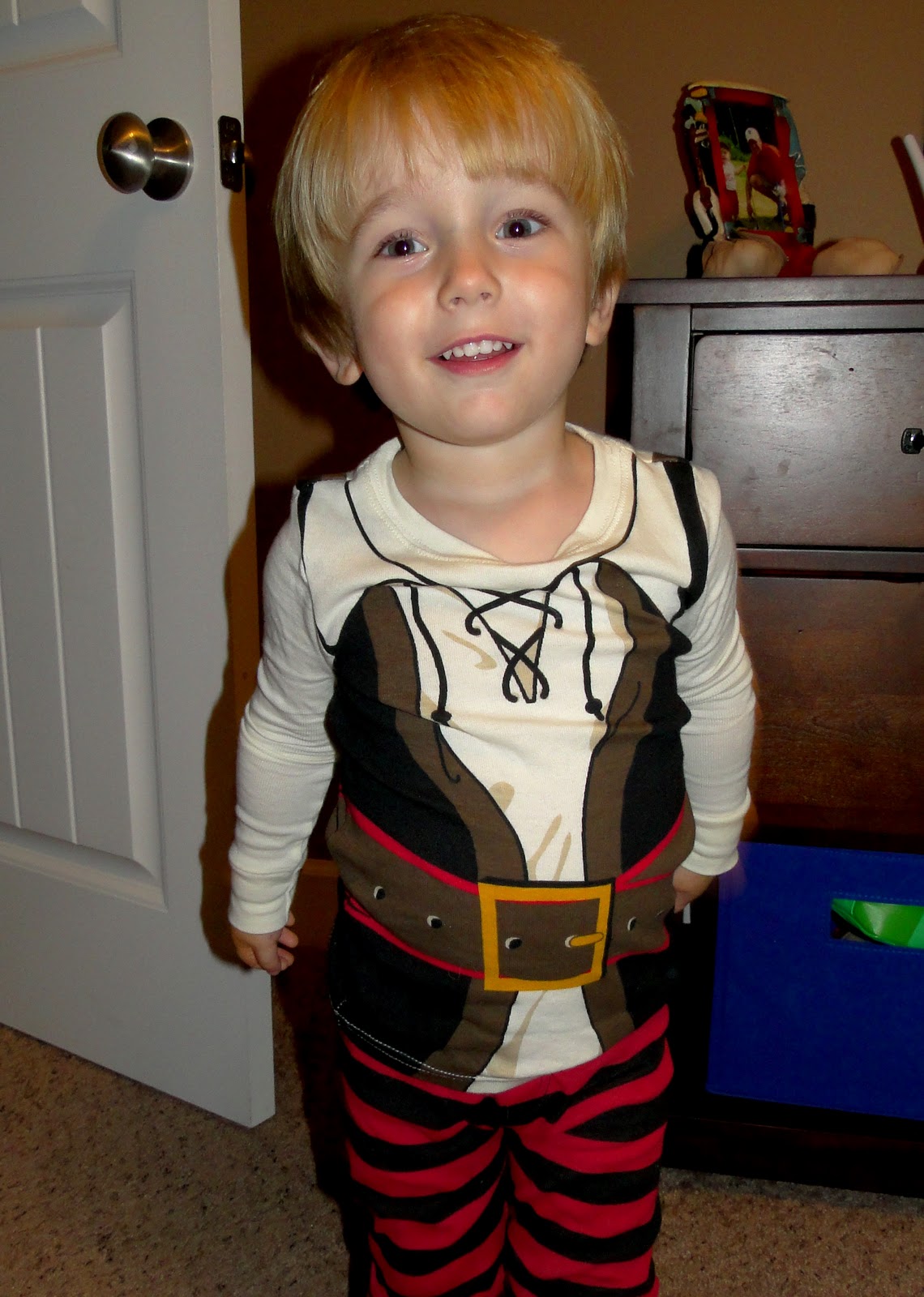 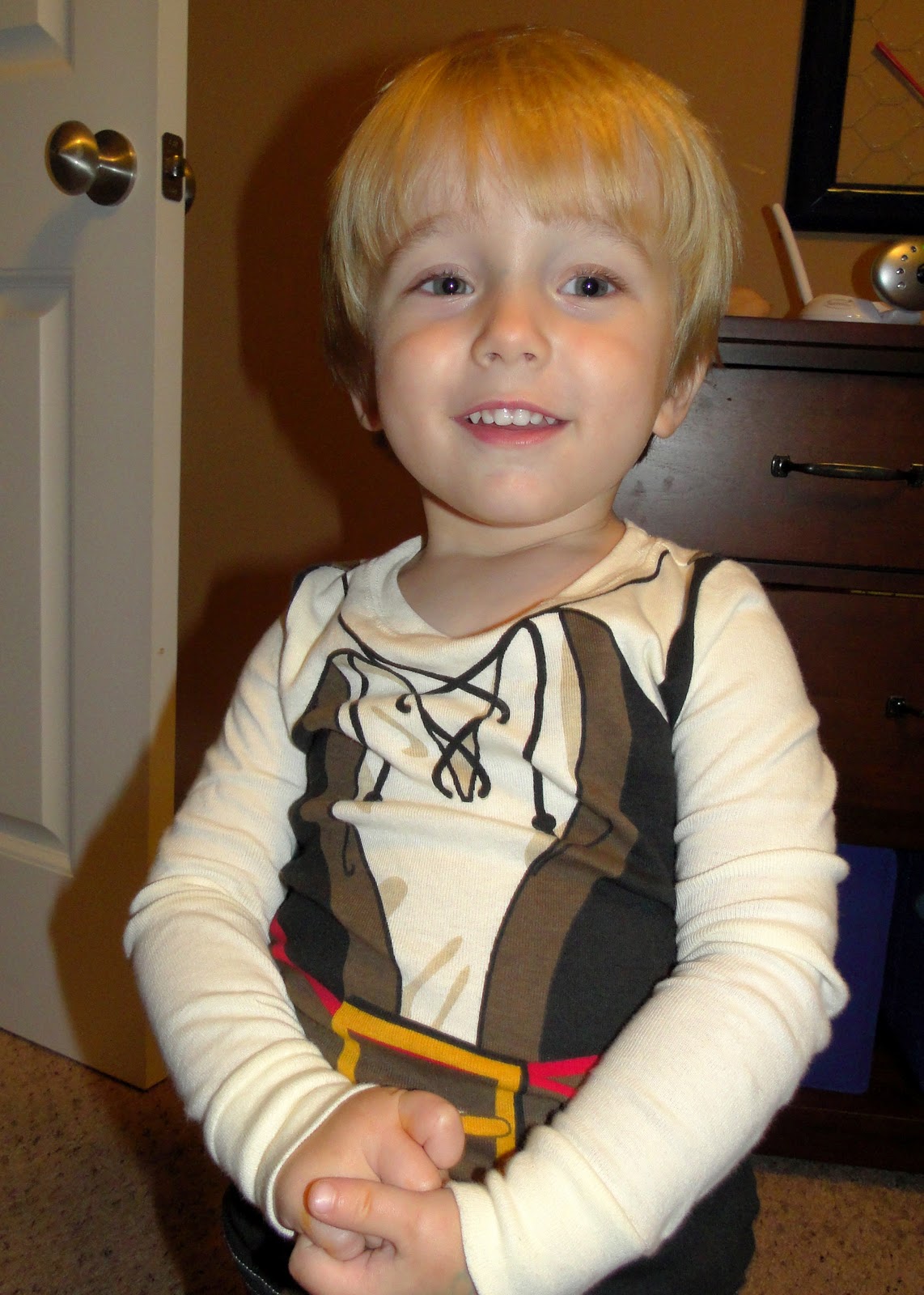 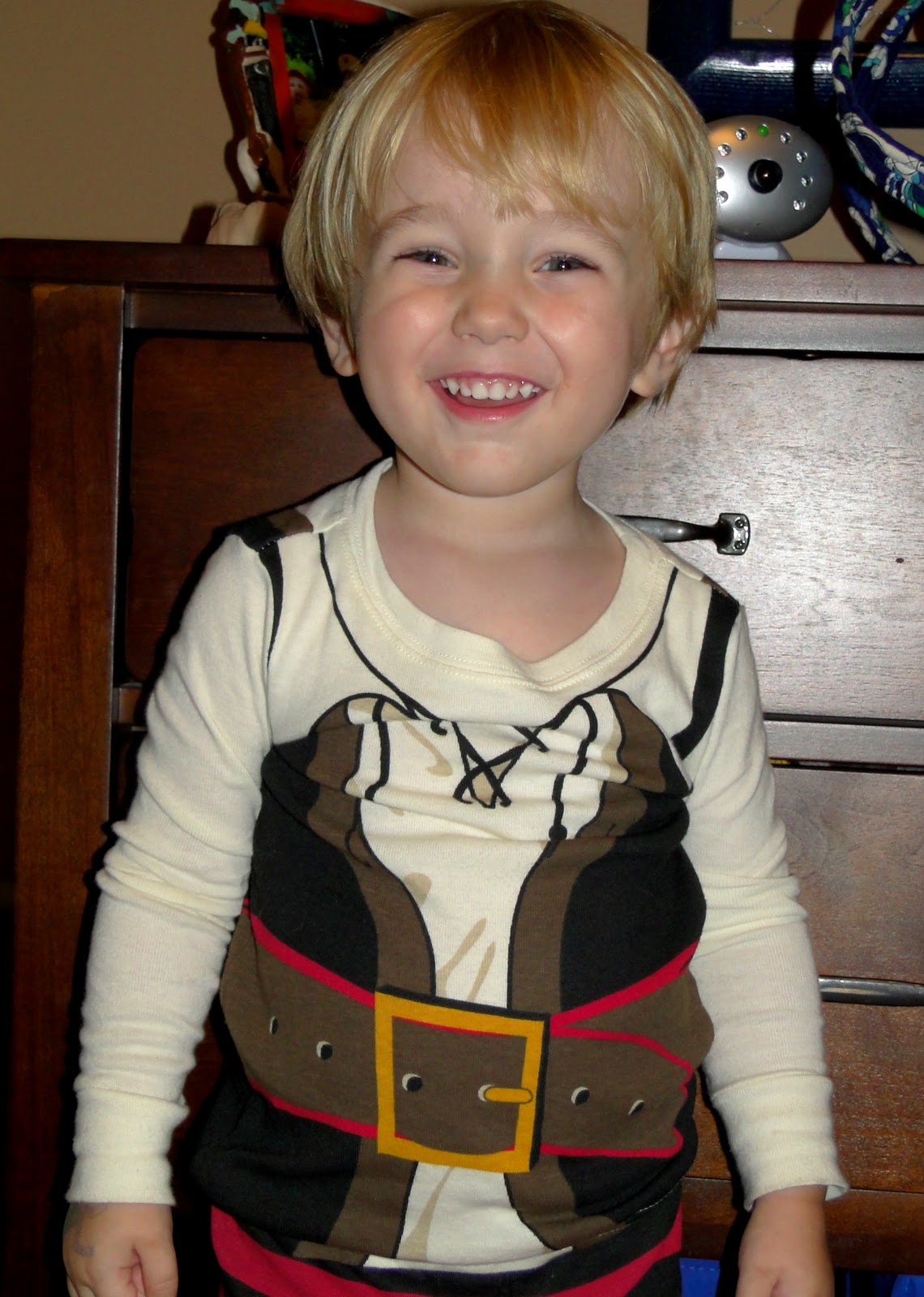 Other Monthly Moments for October: