I got home from Memphis at 2 am on a Saturday morning (June 22nd if anyone was wondering just how far behind I am!). Thankfully my sweet husband let me sleep a little later than our usual 7 am wake up time. Even though I was tired, I was itching to see the kids! Zach took them down to the golf course to hit some balls (and, yes, he dressed them too…) and then we agreed I’d meet up with them at Lowe’s for Build and Grow! 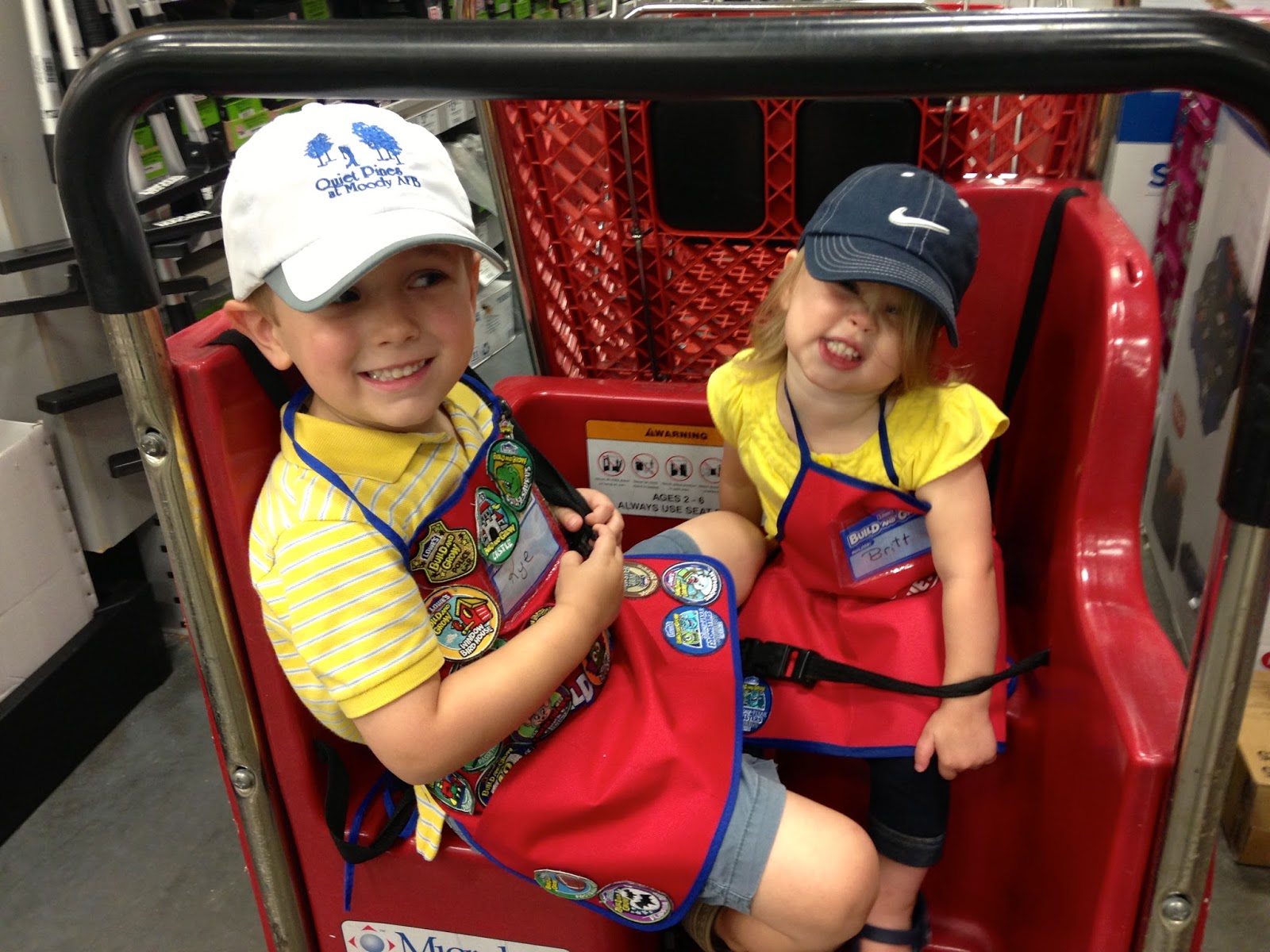 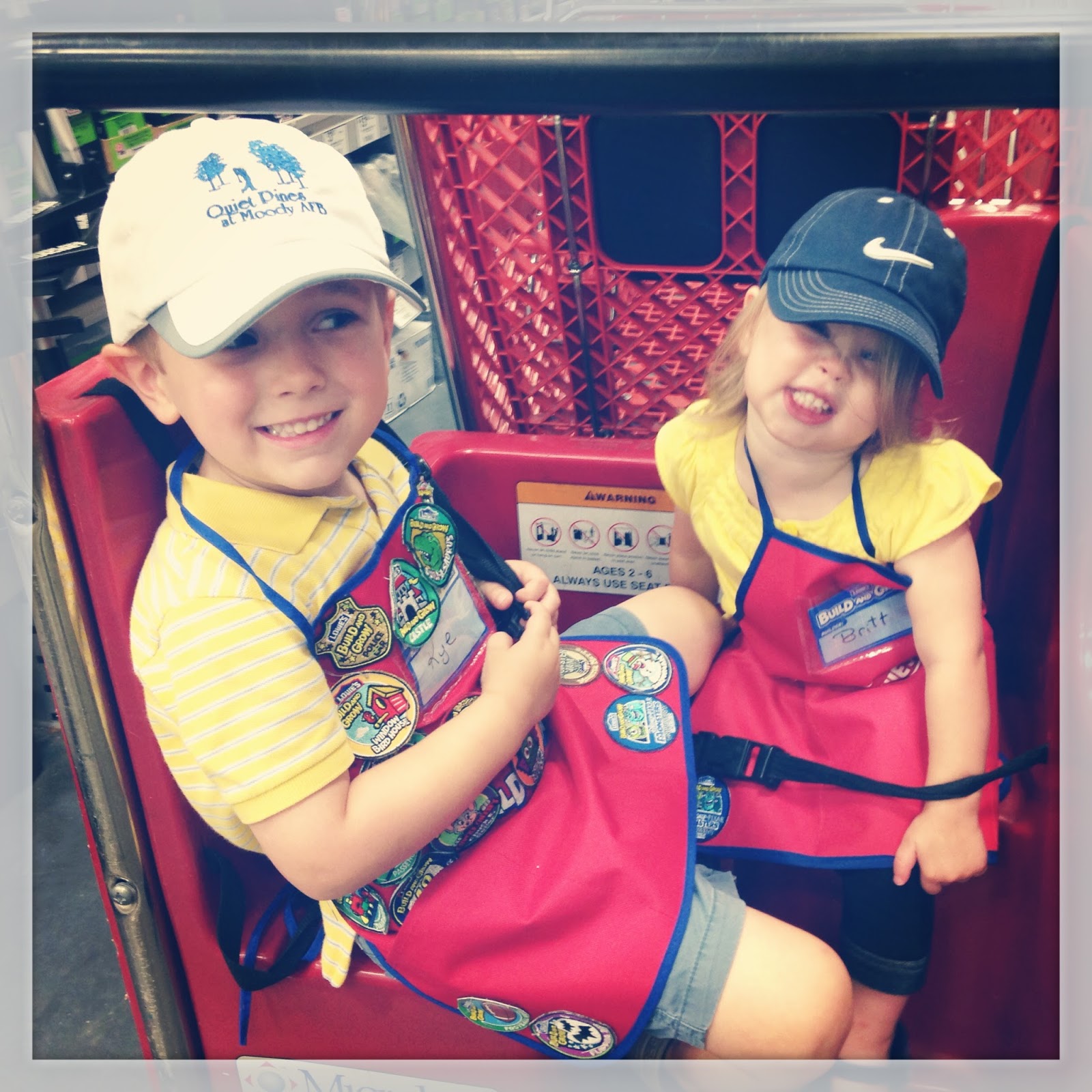 That weekend was when the new Disney Pixar movie, Monsters University, came out in theaters. Zach and I planned on having to kids participate in the Monsters themed Build and Grow and then surprise them that afternoon with going to the movie! Good plan huh? 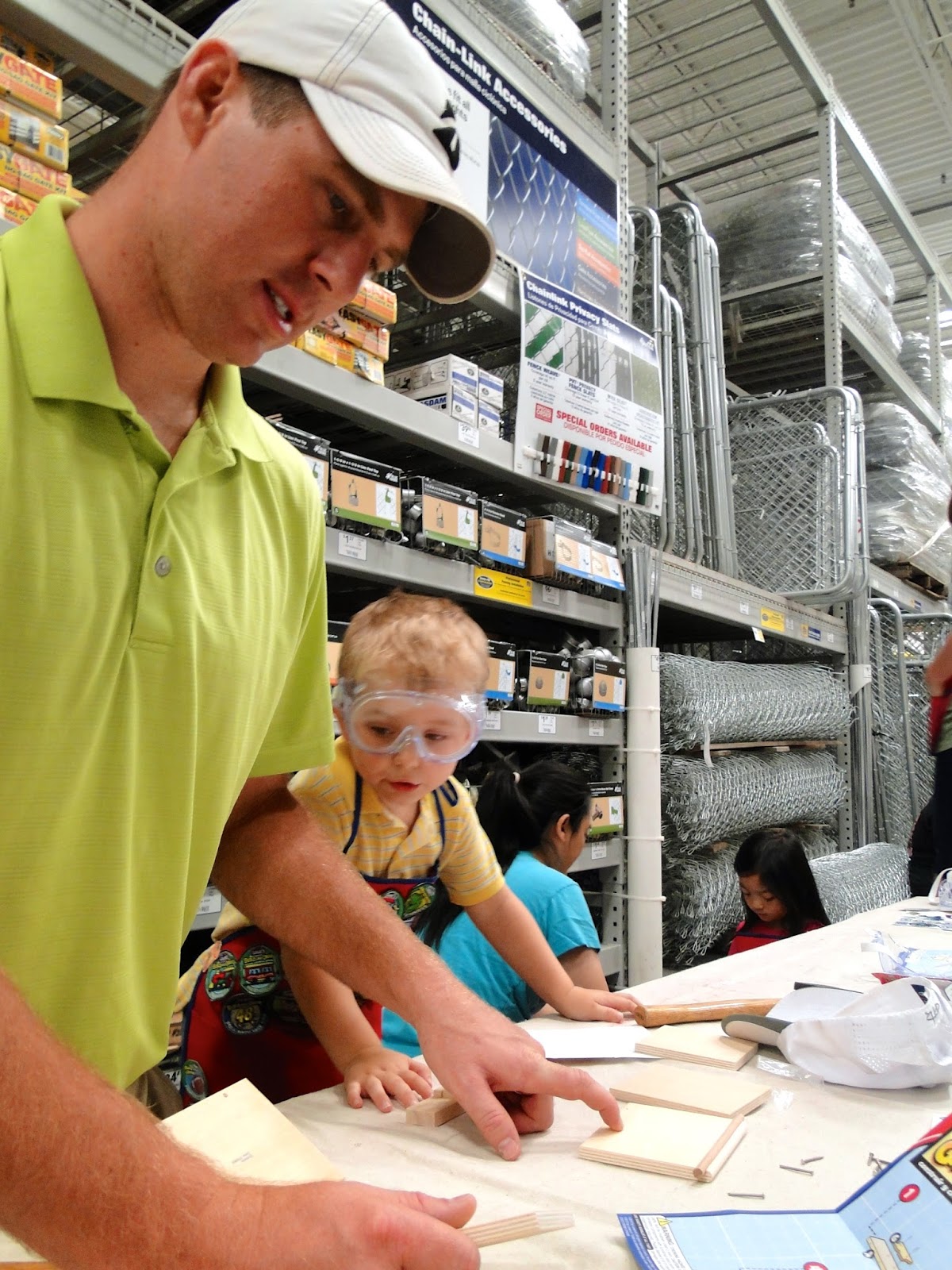 Britt was more into “reading” the directions than actually building. 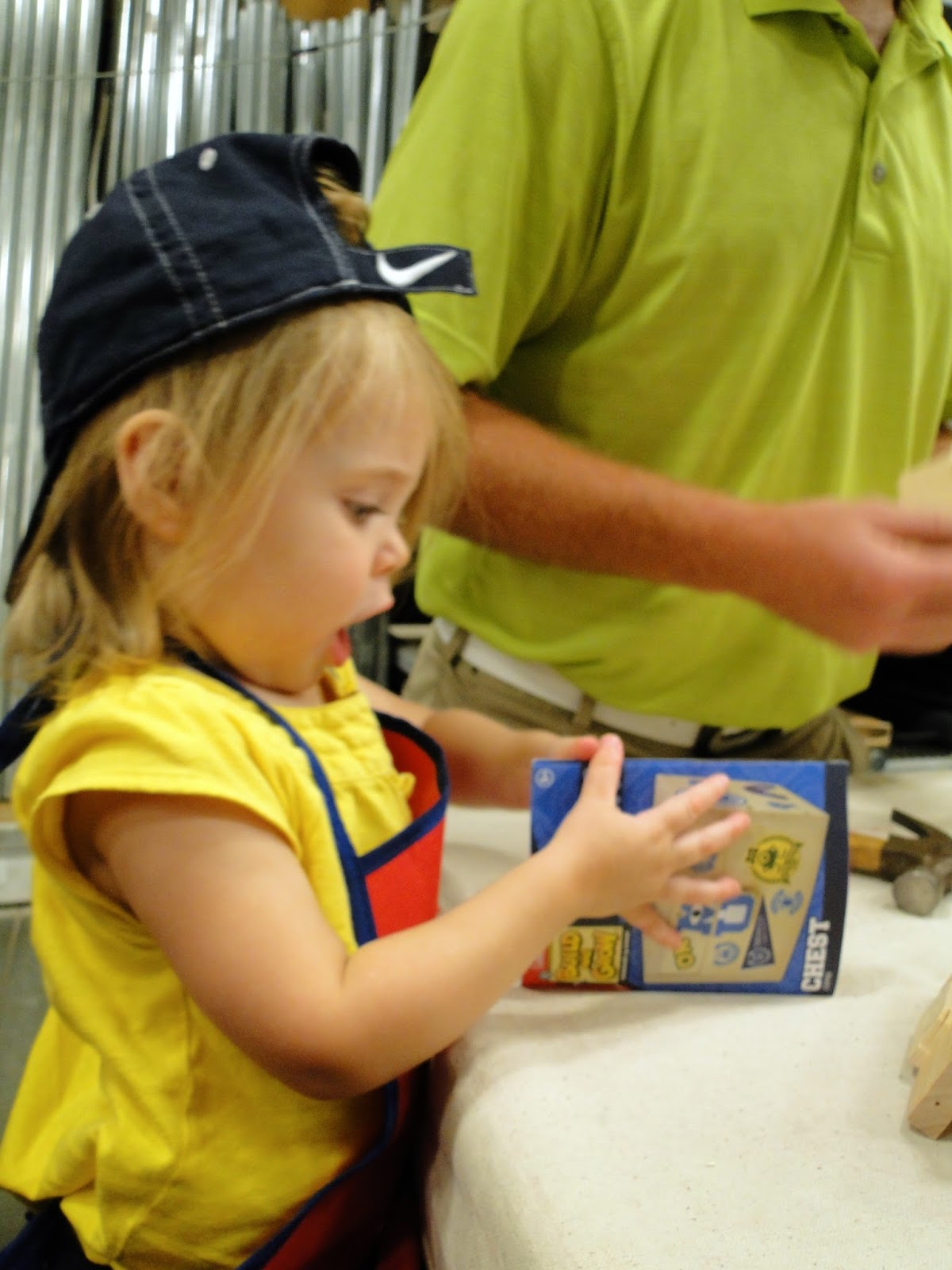 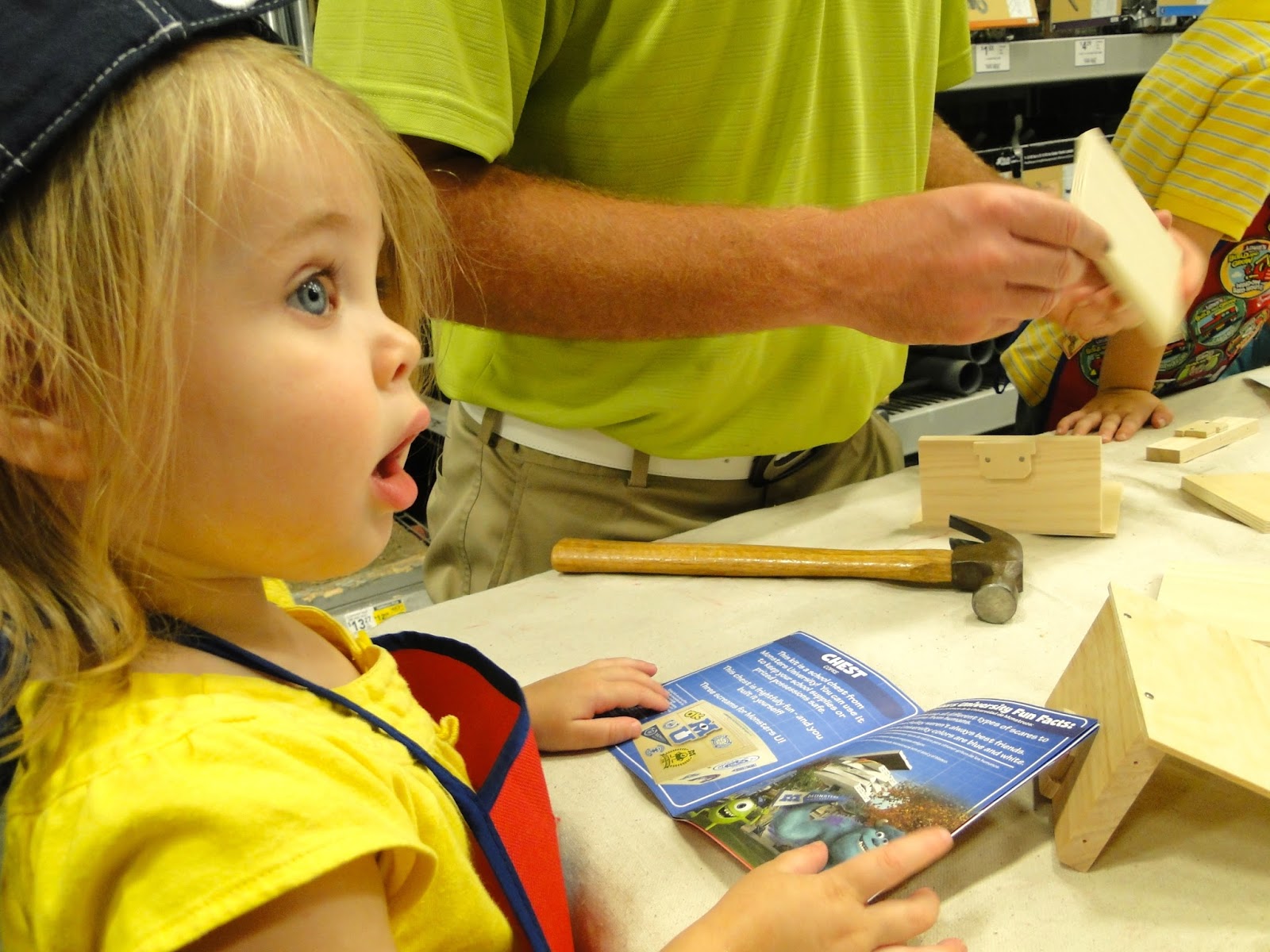 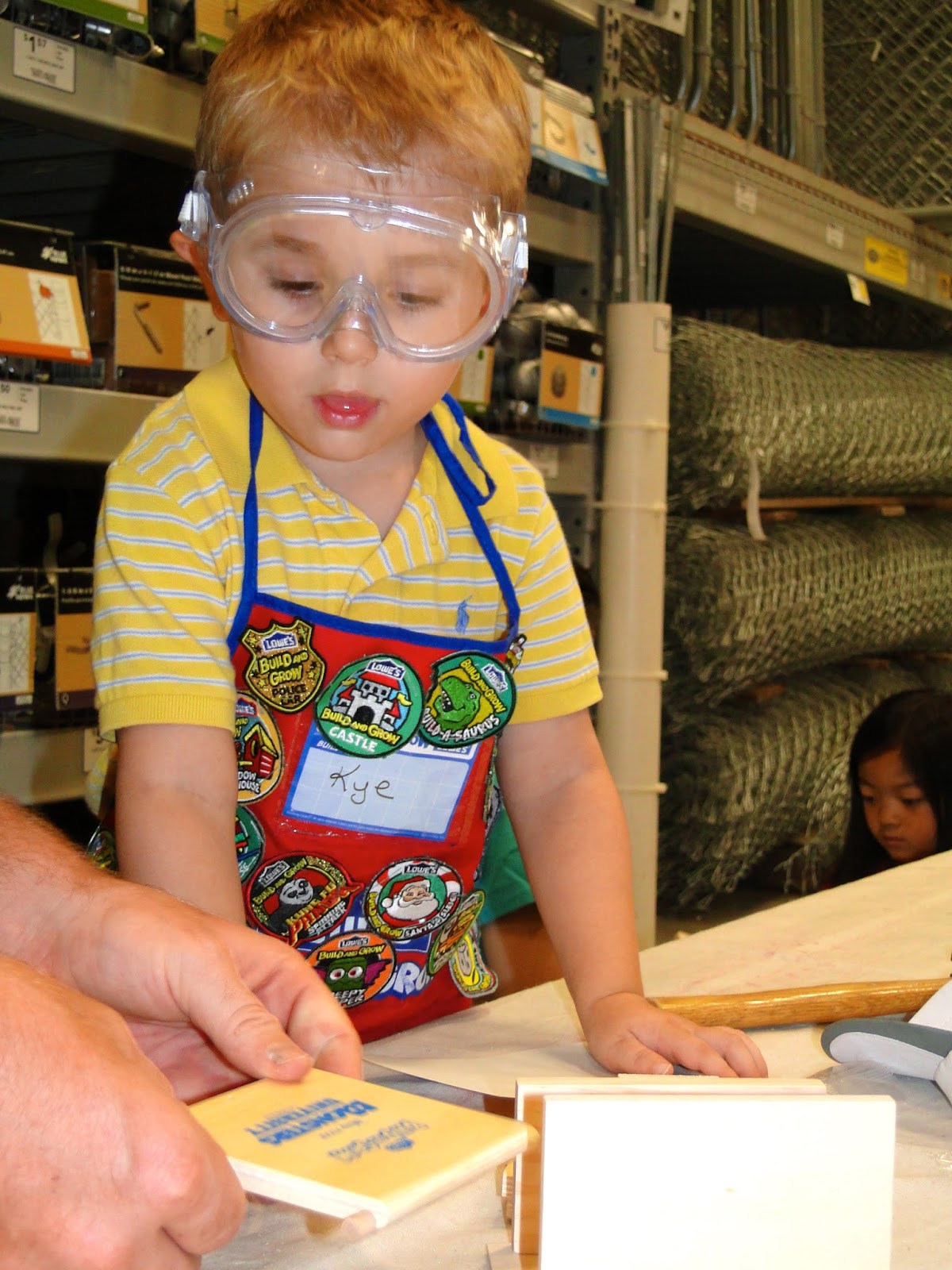 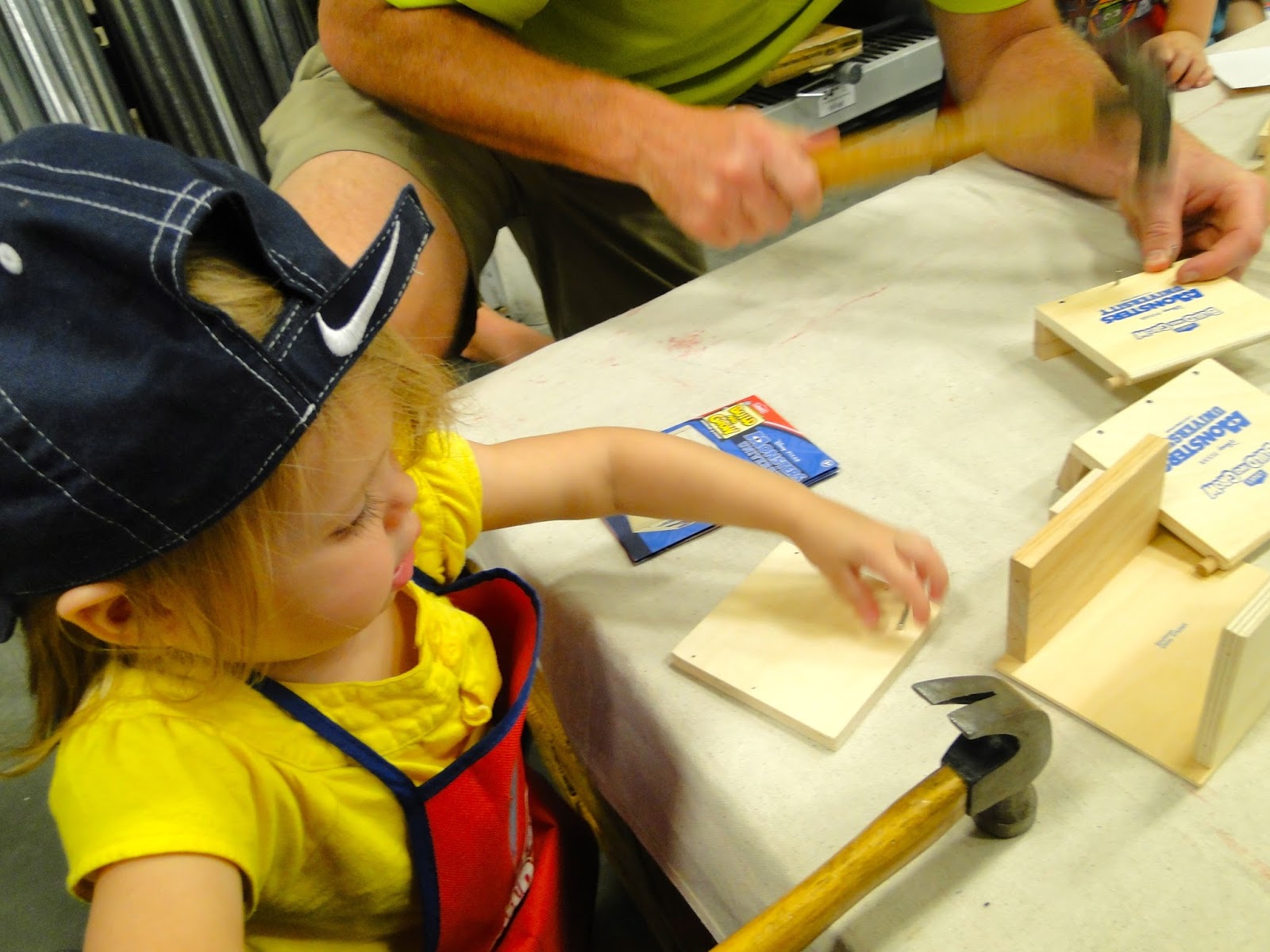 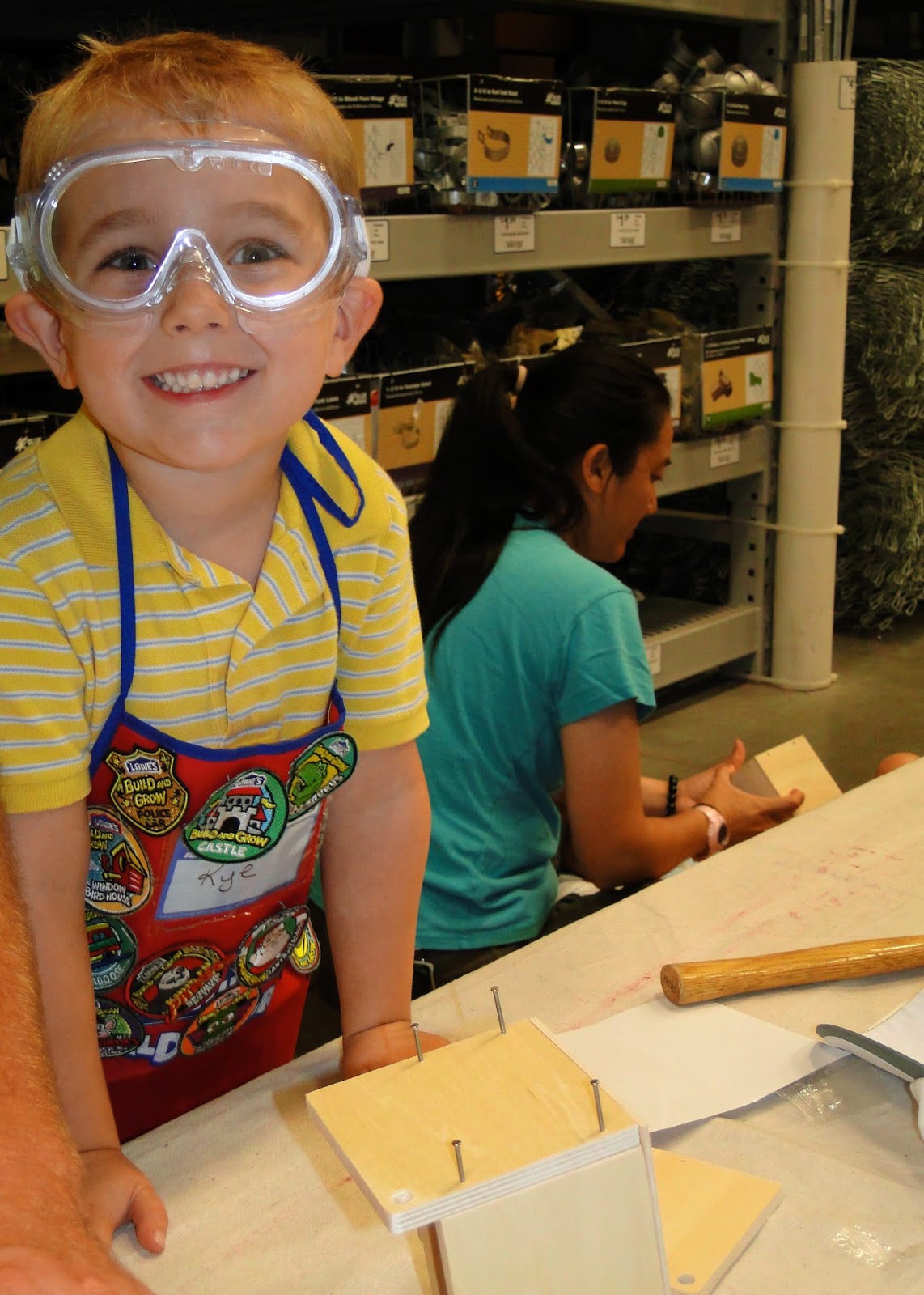 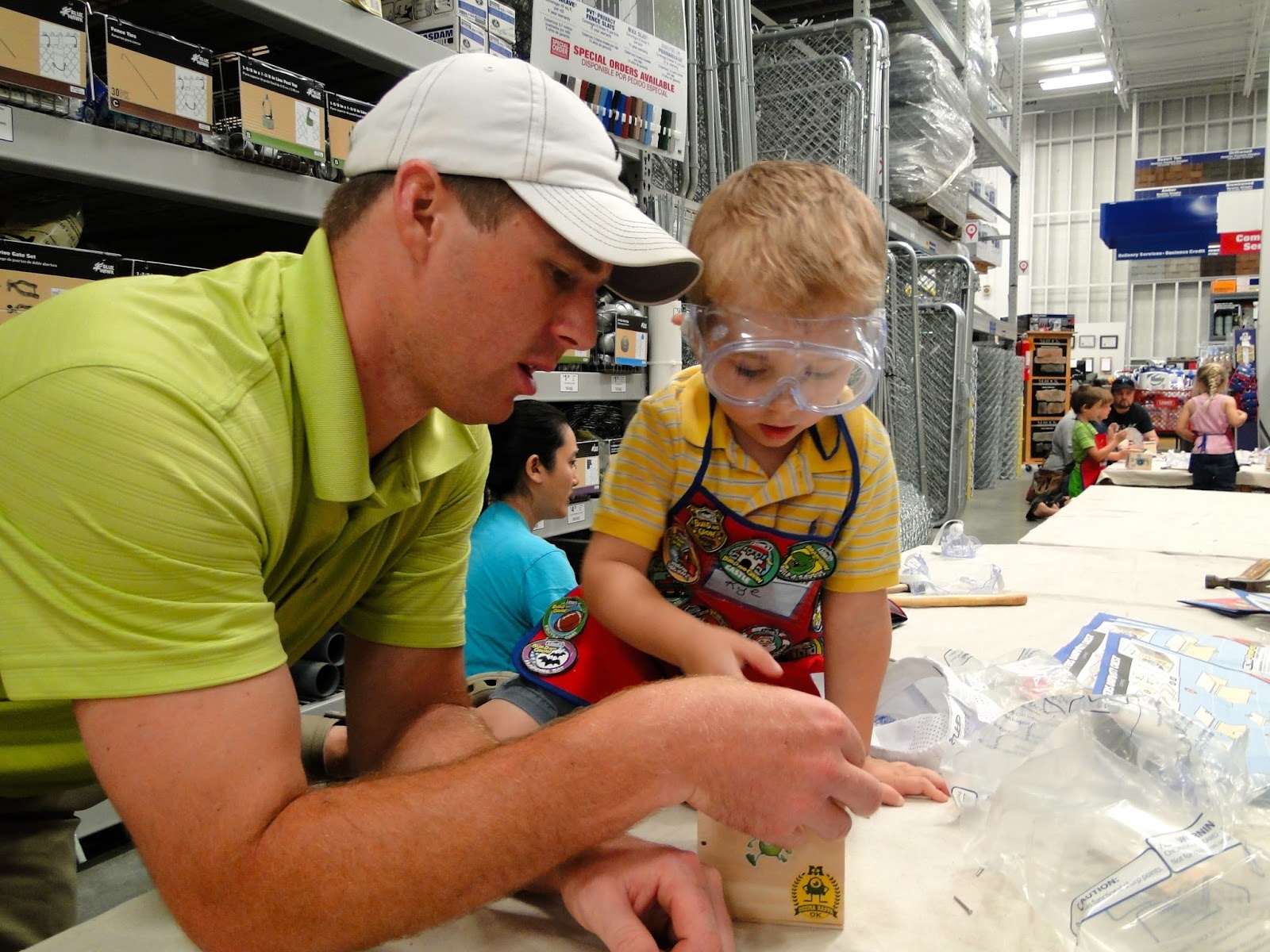 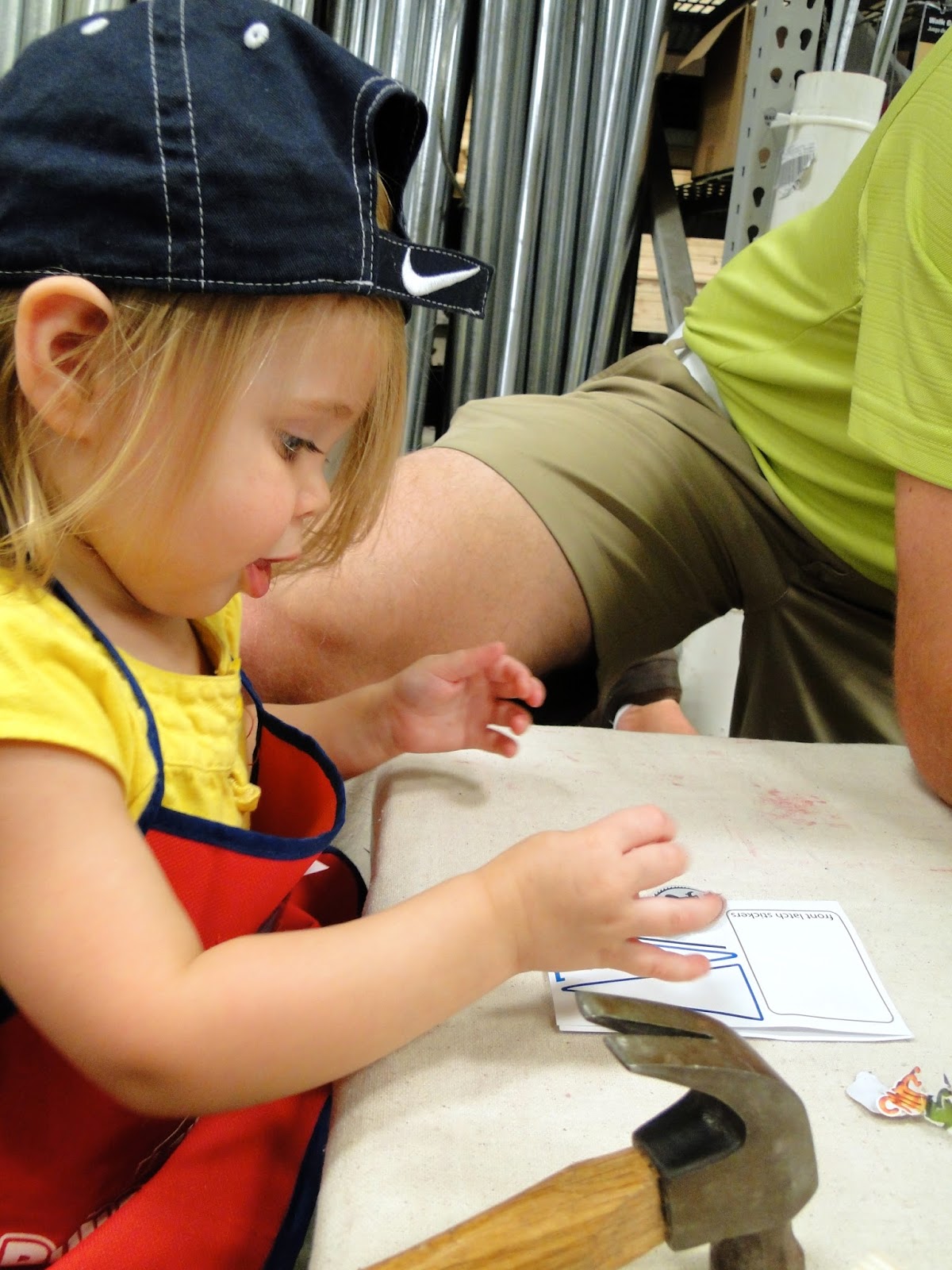 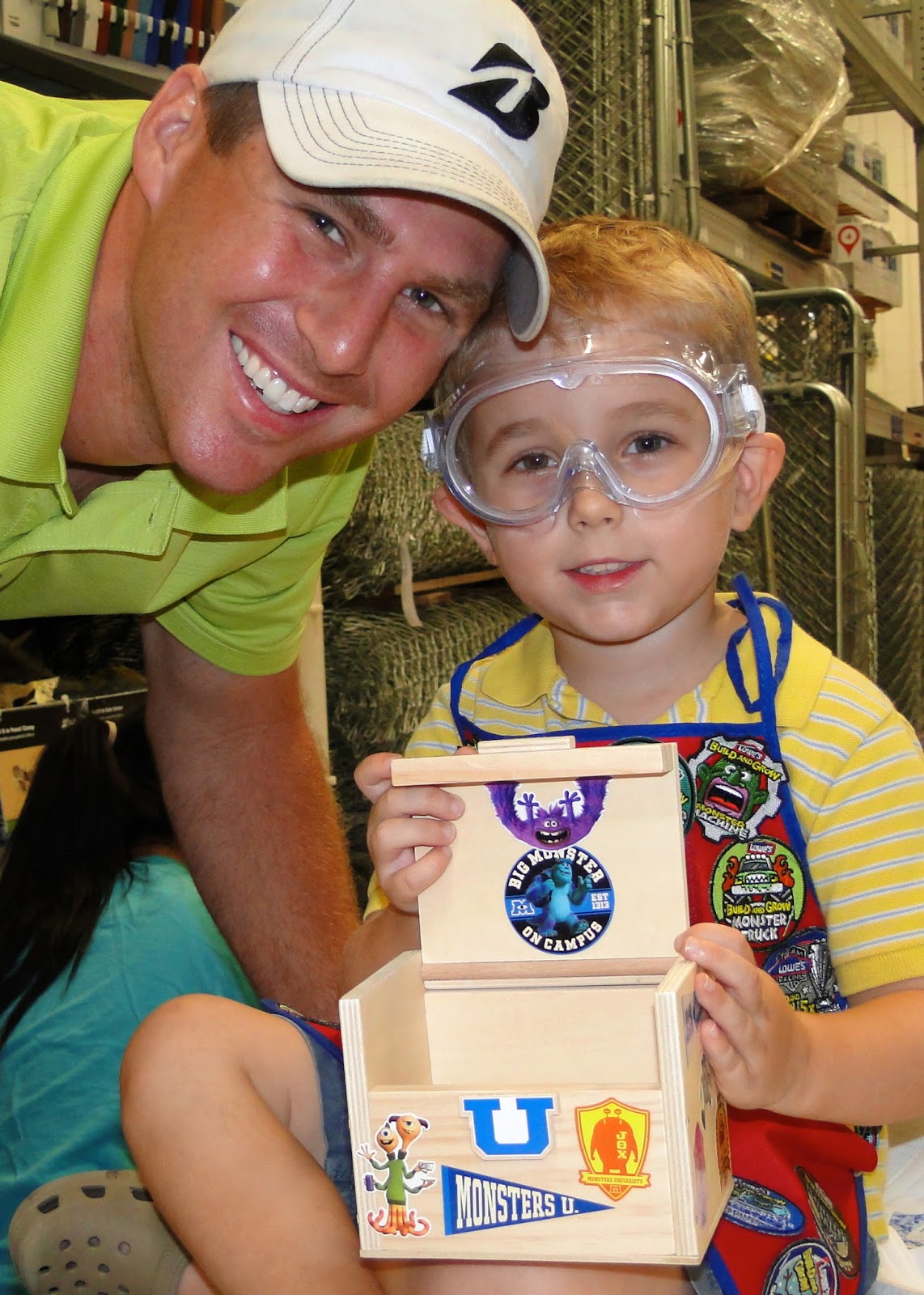 Yes, I wore the exact same outfit as the day prior. Don’t judge 😉 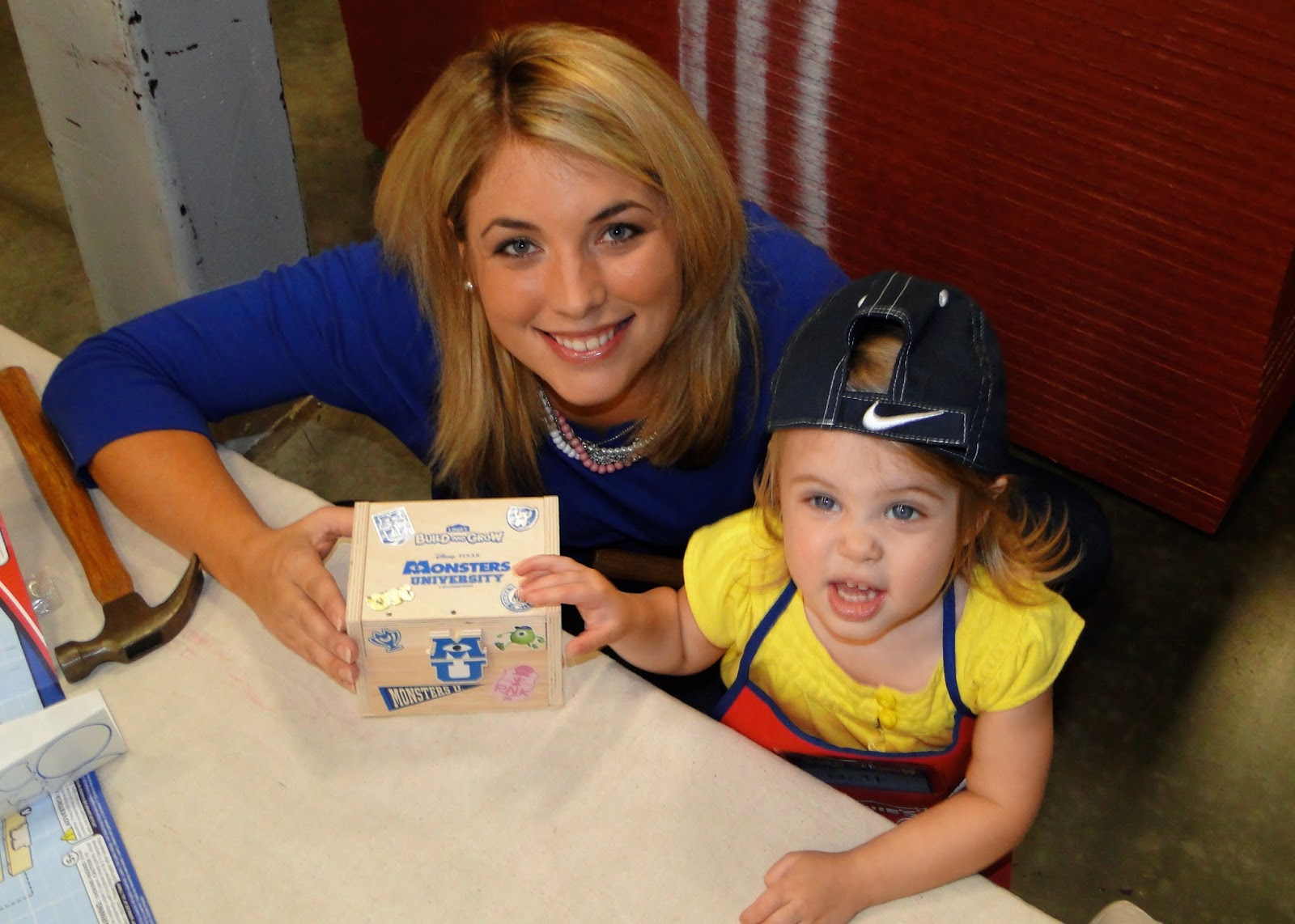 The movie was playing at 4 which worked out great for their schedules. We got them up from naps and headed to the theater! I snuck in their dinners to give them something to do while watching and hoped that Britt would be quiet enough during the movie. Our first family movie experience was at the dollar theater and it went GREAT but this was an entirely different game. Mega popular movie on the weekend it was first released AND at the “new” theater. The place was packed full of people and it did not go as smoothly as our first movie experience!

Britt struggled sitting still and being quiet during the movie. Zach actually took her out multiple times. And she yelled out several times too. She kept saying random words SUPER loud. She wasn’t fussy really, just LOUD. Like she would say “Papa papa papa!” even though Mr Rusty wasn’t there with us. I was mortified. I know it was very expensive for our family to do such an outing and that everyone else in the theater spent good money to be there as well so we did our best to keep her as quiet as possible!

Luckily no one said anything to us about it and there were a TON of kids there too so I’m sure she wasn’t the only one being disruptive (it just feels like that sometimes though doesn’t it? Like at church if she’s fussy I feel like EVERYONE is staring at us haha). She did keep rubbing the guy’s head who was sitting in front of us and it was so funny! She’s def not shy at all!

The movie was FABULOUS. I really, really have a hatred for Cars 2. We were SO disappointed with it and I was nervous about Monsters University as well. It being set in college I knew there was potential for a lot of inappropriate adult humor. Partying scenes. Drinking. Etc. Basically what society often views as “the college experience.” I did my homework before we went so I’d be prepared as to what we’d be seeing. I like to go into a movie we haven’t seen before prepared to talk to the kids about anything they see that isn’t okay or doesn’t follow our value system for our family. I wish I had done the same thing before we saw Cars 2 but that was a good lesson for me and now I ALWAYS check out the site pluggedin before letting the kids see a movie I haven’t already seen myself!

Zach and I both REALLY enjoyed the movie. It had a great storyline that kept us all watching (well…not so much Britt but I mean she’s not even two yet haha) and wanting more. I can already bet that both this movie as well as Wreck-It Ralph will be under the Christmas tree this year!

After the movie Kye wanted a picture in front of some of the movie posters at the theater. I let him get one in front of this Turbo poster even though he will not be seeing the movie. I mean we are Disney people to the core and I’m not about to spend money on a non-Disney movie. Duh 🙂 I mean it’s just a knock-off of the Cars franchise anyway right? 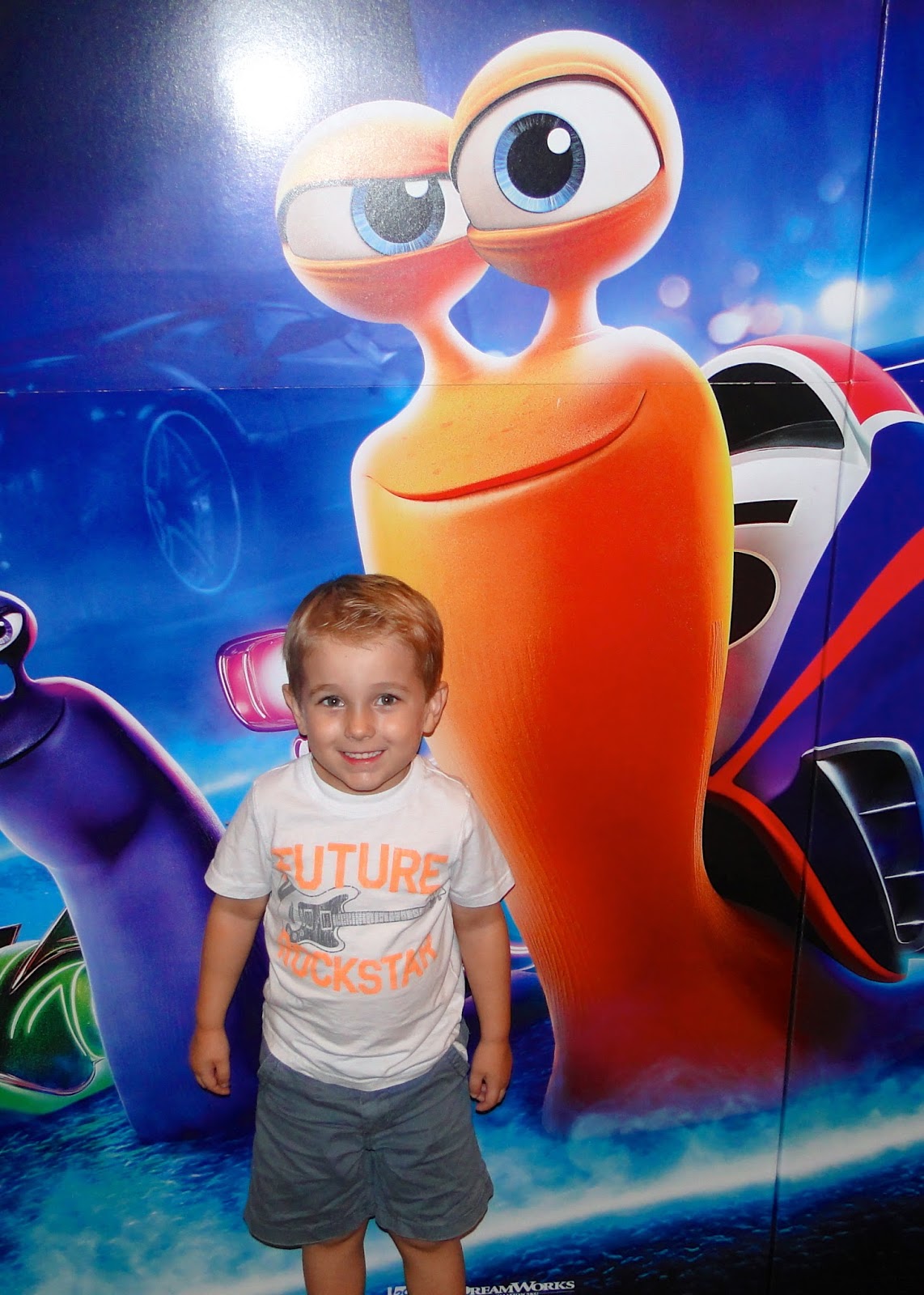 Roaring like a monster which is our new favorite “animal sound” around here! 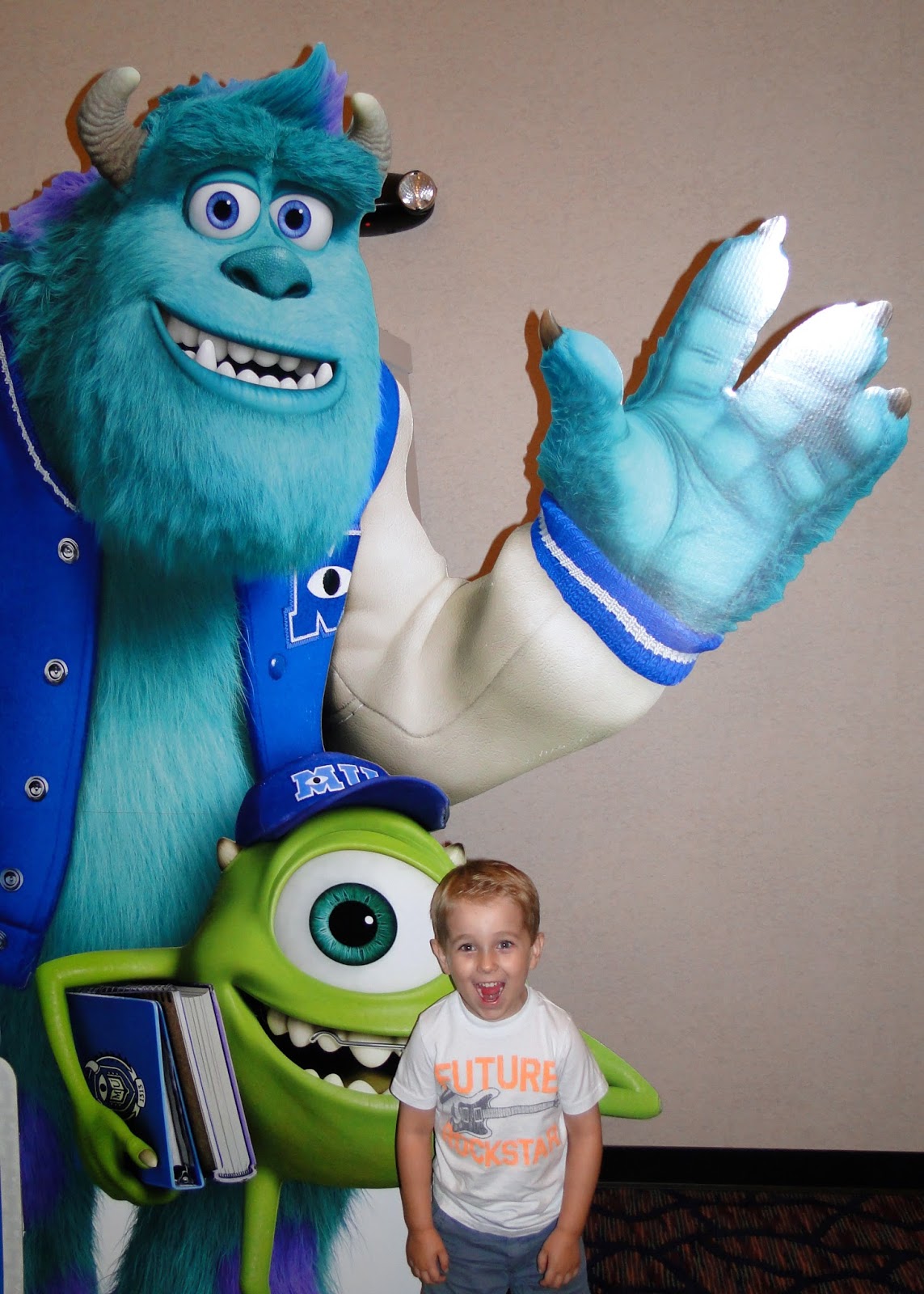 If your family hasn’t seen Monsters University yet then I HIGHLY recommend it! Very family friendly. Not the least bit scary at ALL and a solid storyline that any age can pretty much follow 🙂