Two nights ago our kitchen light suddenly went out. Yesterday Zach bought new bulbs for it but they didn’t fix the problem either so he thought he’d go up in the attic and make sure it wasn’t an issue with the electrical work. As he was up there we were talking through the kitchen ceiling and he said “I better be careful not to fall through.” I just had a bad feeling about it. Zach’s a pretty big dude. Well I was fixing dinner and heard the sound that meant my kitchen ceiling may never be the same. Zach’s foot was dangling down through the big hole. I immediately was upset. I said “I KNEW IT I KNEW IT” over and over again. Zach didn’t say a word, I just saw the foot slowly go back up into the ceiling. 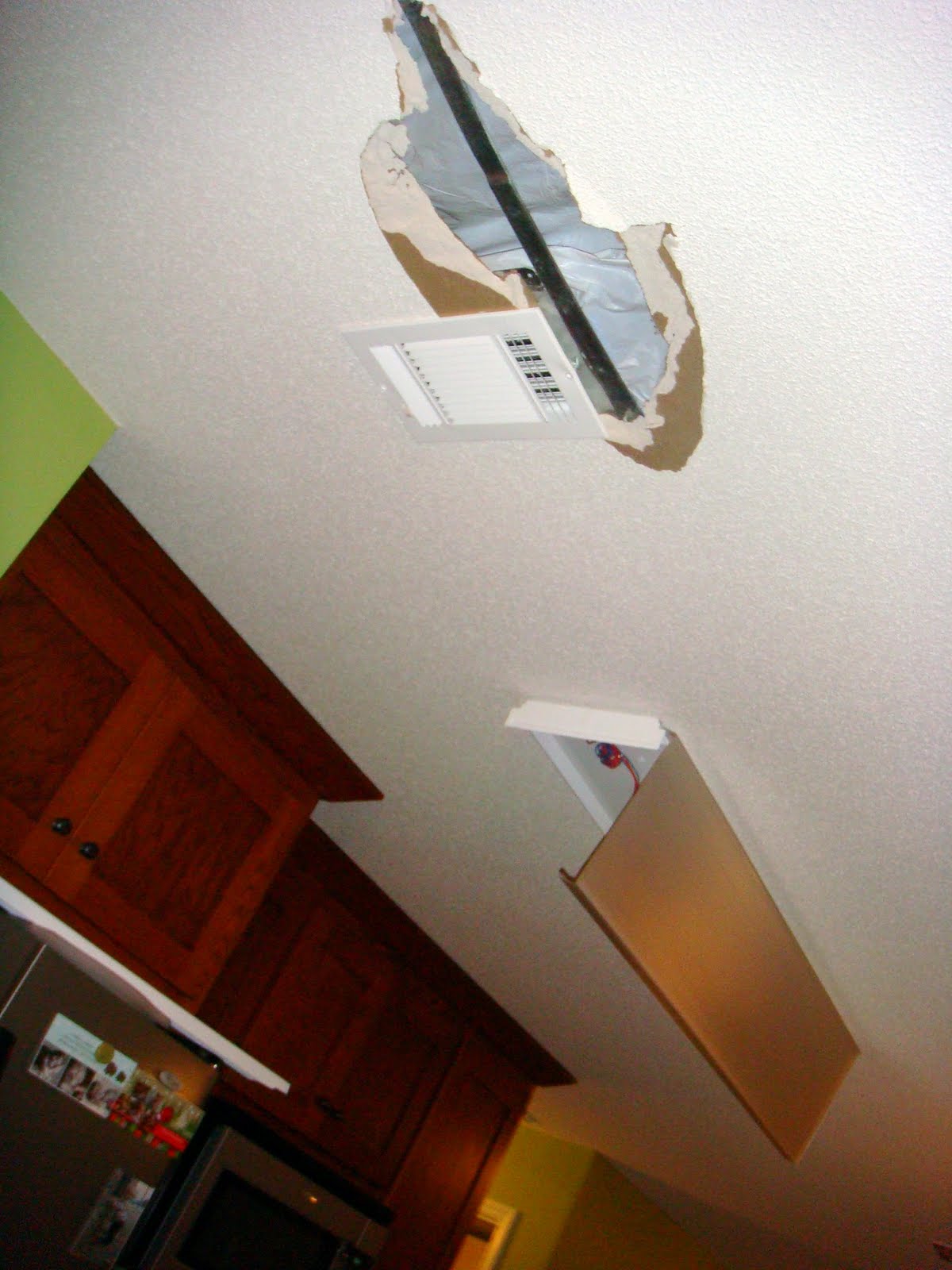 I know as a child my dad actually fell through the attic right over my head in my bed room while I was sleeping and the spot never looked right. I was so upset because it’s so important for our kitchen ceiling to look as it should! Plus we were having company over and that’s embarrassing!!! Zach felt so bad about it. Obviously he didn’t mean to do it. But I was mad about it anyway! Lately I’ve been the one screwing up (forgetting things left and right) and he’s been irritated with me so much about the dumb stuff I’ve done so I enjoyed my chance to finally be annoyed with him haha! I thought that now things were even and I didn’t have to feel as guilty about my dumb things because his one thing was worse than my million little forgetful ones added up! 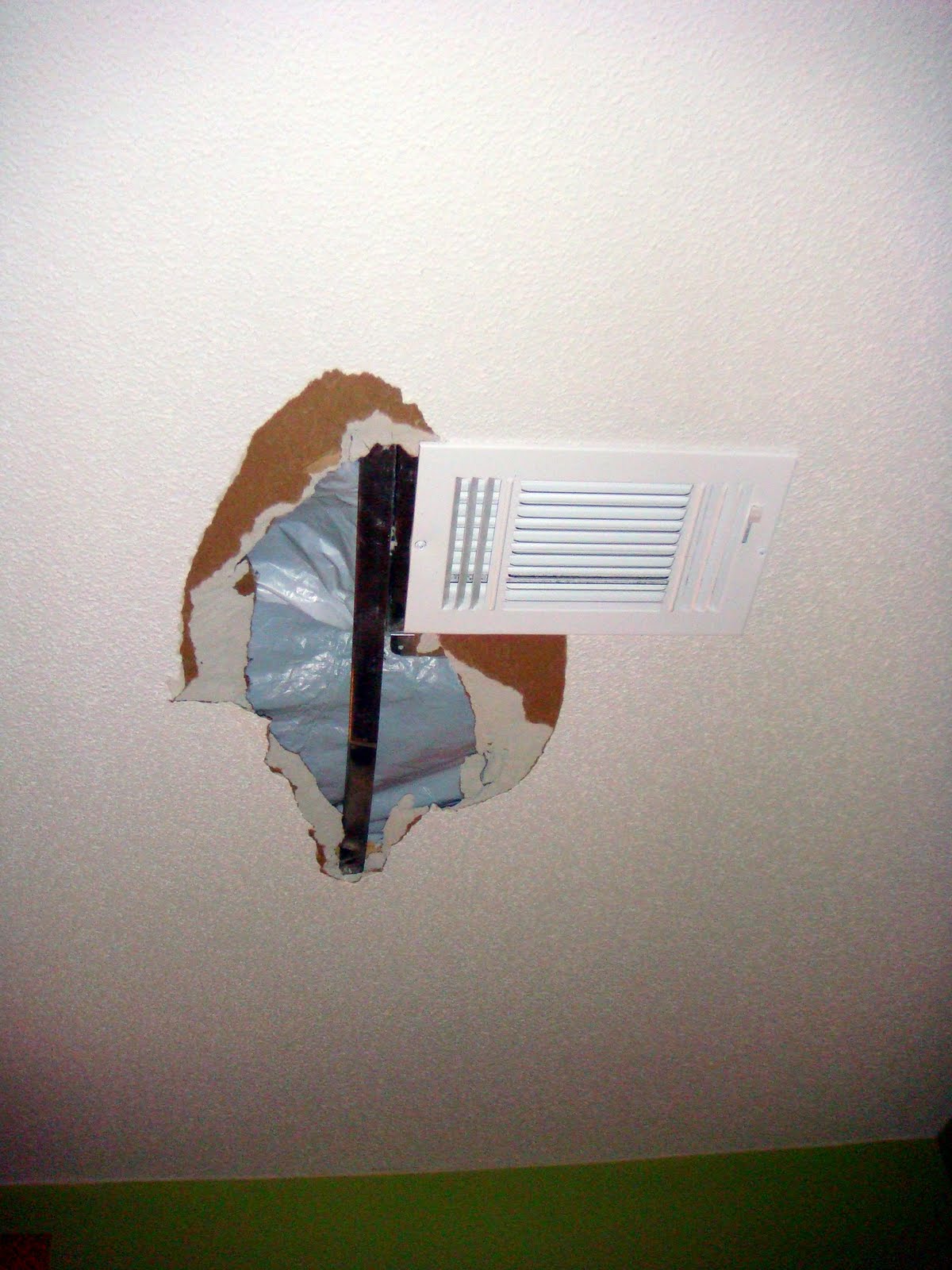 Our even-ness didn’t last for long though 🙁 I was so upset about the ceiling (by the way, I keep saying I was upset but I think I did a decent job of not being really all that mean about it. I knew it was an accident and that he felt so so bad!!!) that Zach went to Home Depot right away to see what he could do about it. I took over his duties with Kye for the evening and gave Kye a bath and put him to bed. Once Zach got home we heard a sound over the baby monitor that let us know Levi was in Kye’s room. Zach snuck in there to get him out and asked me if I had put Baby Vicks on Kye. I said no and then he sat on the couch with Levi and said that Levi reaked of diaper rash cream.

I guess I’d left the Desitin sitting out or it fell of the dresser when I put Kye to bed. Zach snuck back into Kye’s room and found the tube under his crib 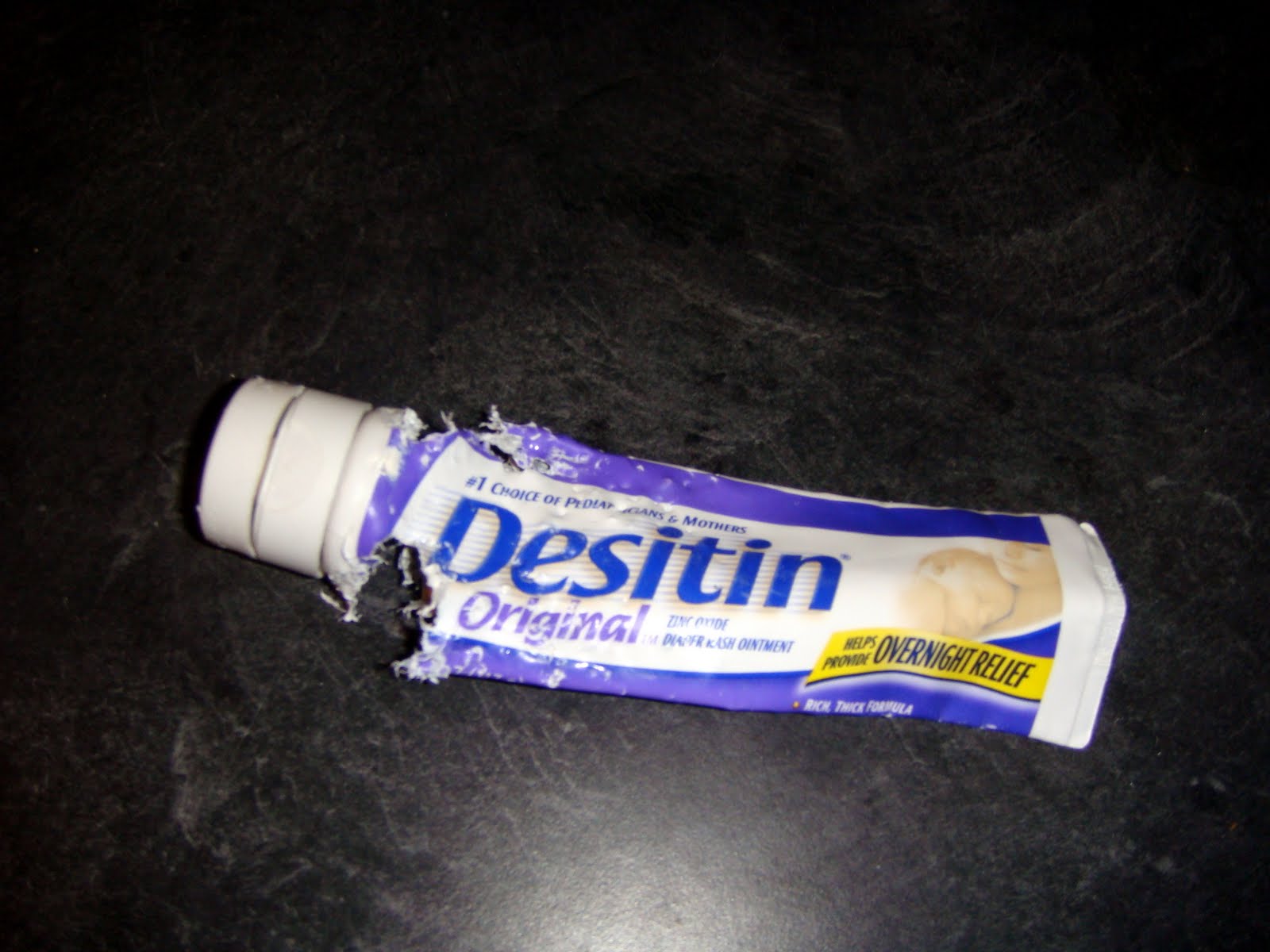 It was chewed all the way through and pretty much empty. Luckily, it was about 2/3 empty anyway. We decided to Google it to see if it would cause a problem for Levi and yup, it’s a poison. Awesome. Chocolate episode round 2!!! This time we did a better job of handling it. At first I wasn’t going to do anything. Levi was acting fine. But then the more I Googled the more I saw that people said it could cause some mega issues (I did find it funny that so many dogs get a hold of this stuff!). I ended up calling the vet (Azalea City Animal Hospital) after hours and spoke to our actual vet. I didn’t tell him our name because I was embarrassed that after the chocolate incident that it happened again!

Give some pepto bismal to help them feel better

He was super nice about it and said he would even meet us at his office during the night if things got worse. I apologized for calling but he said that diaper rash cream has a pretty high level of Zinc in it and that the animal will seem fine but then 24-48 hours later their red blood cells will be gone and they will die. Glad I Googled!

We did the treatment and this time we were smart enough to take Levi outside for him to puke. It was mega chunky white nastiness but the poor thing got it all out. It’s handy to have a medicine syringe thing for the baby because we’ve honestly use it more for the dogs! He was pretty weak all night but did drink some water and ate a little. He’s fine today which I’m thankful for! I had a hard time falling asleep last night because I was so worried!

When the hole in the ceiling happened I thought I’d never laugh about it. But when Levi had his second brush with death the hole in the ceiling became super funny. Haha. I say we still call it even on the stupid mistakes and I’m gonna take me some Omega 3 supplements (thanks to Kelly!) So hopefully I’ll get back to my smart-self soon 🙂

PS: I know Kye is now 10 months old. I know I’m overdue for a monthly summary. I’m kinda in denial that my son is this old already! I’ll do it next week, promise 🙂 TONS of videos I’m slowly uploading!!!