A few weeks ago we visited The Bump to see Leo in 3D/4D (I don’t get which is which?). You can look back at those images here! Soon after I posted that blog post I happened to run into one of the owners of The Bump and she also happens to read the blog 🙂 She was SUPER sweet and said that she wanted me to go back up there a couple weeks later to see if we could get some even better images of our sweet baby. Duh, I was PUMPED!!!

I think one of the best things about The Bump is that they do some evening appointments. With Zach’s work schedule it really is nice that he’s able to work a full day and then we can go up there after he’s done. They told me to be sure to drink a gallon of water each day for the four days leading up to my appointment and then to drink a glass of OJ about an hour before my appointment time. I followed all the instructions and had my appointment last night (29 weeks and 5 days pregnant). 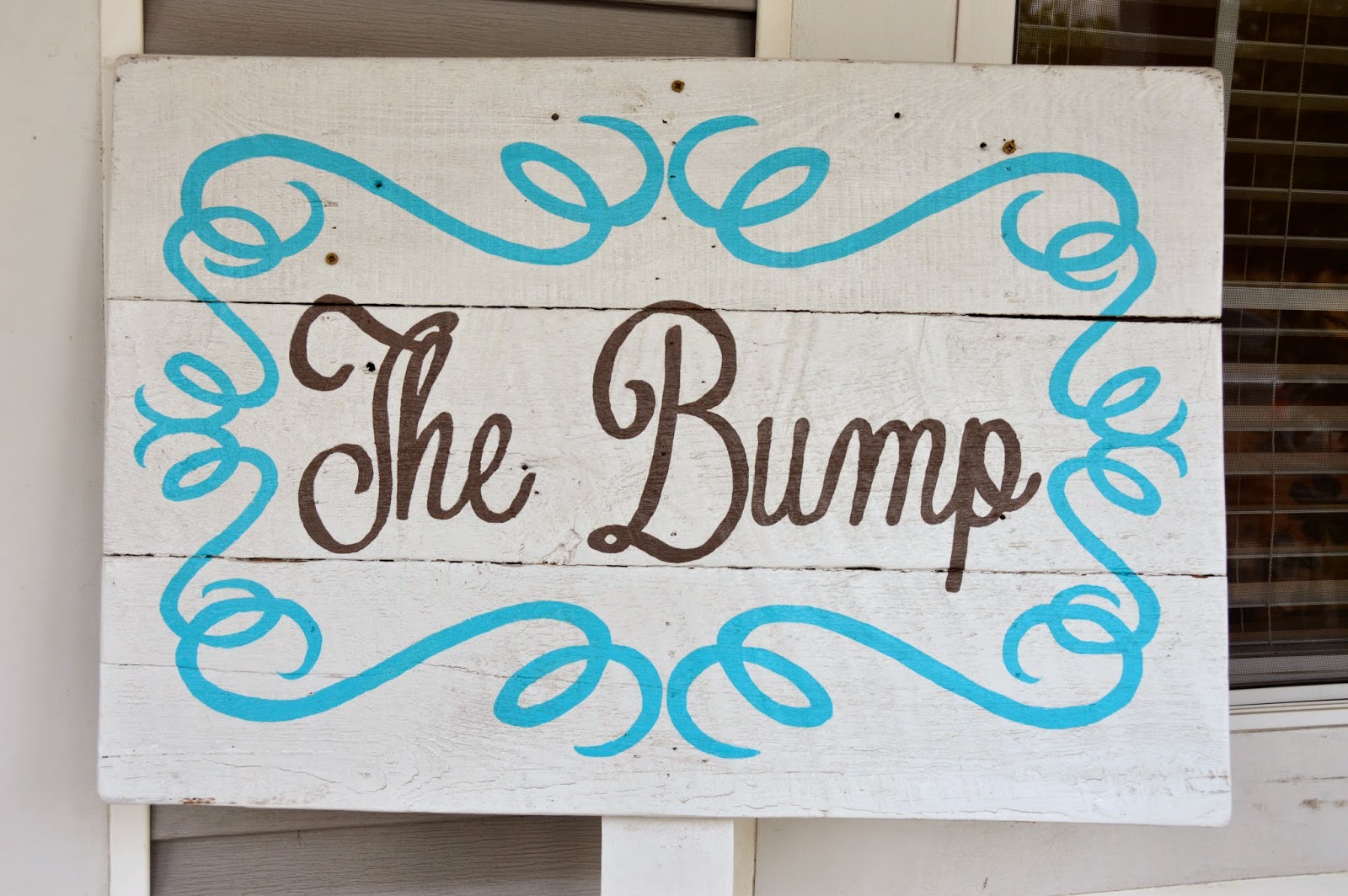 Zach was in a car wreck a week ago and the guy who hit him just now finally got the insurance going. So we had to go pick up Zach’s rental car prior to the appointment. We dropped him off then headed over! They have a beautiful waiting area so we relaxed and looked at pictures of other babies while we waited. Britt ended up getting fussy and I didn’t want her to interrupt the other session going on so we took our crew outside! Luckily it was a beautiful afternoon! 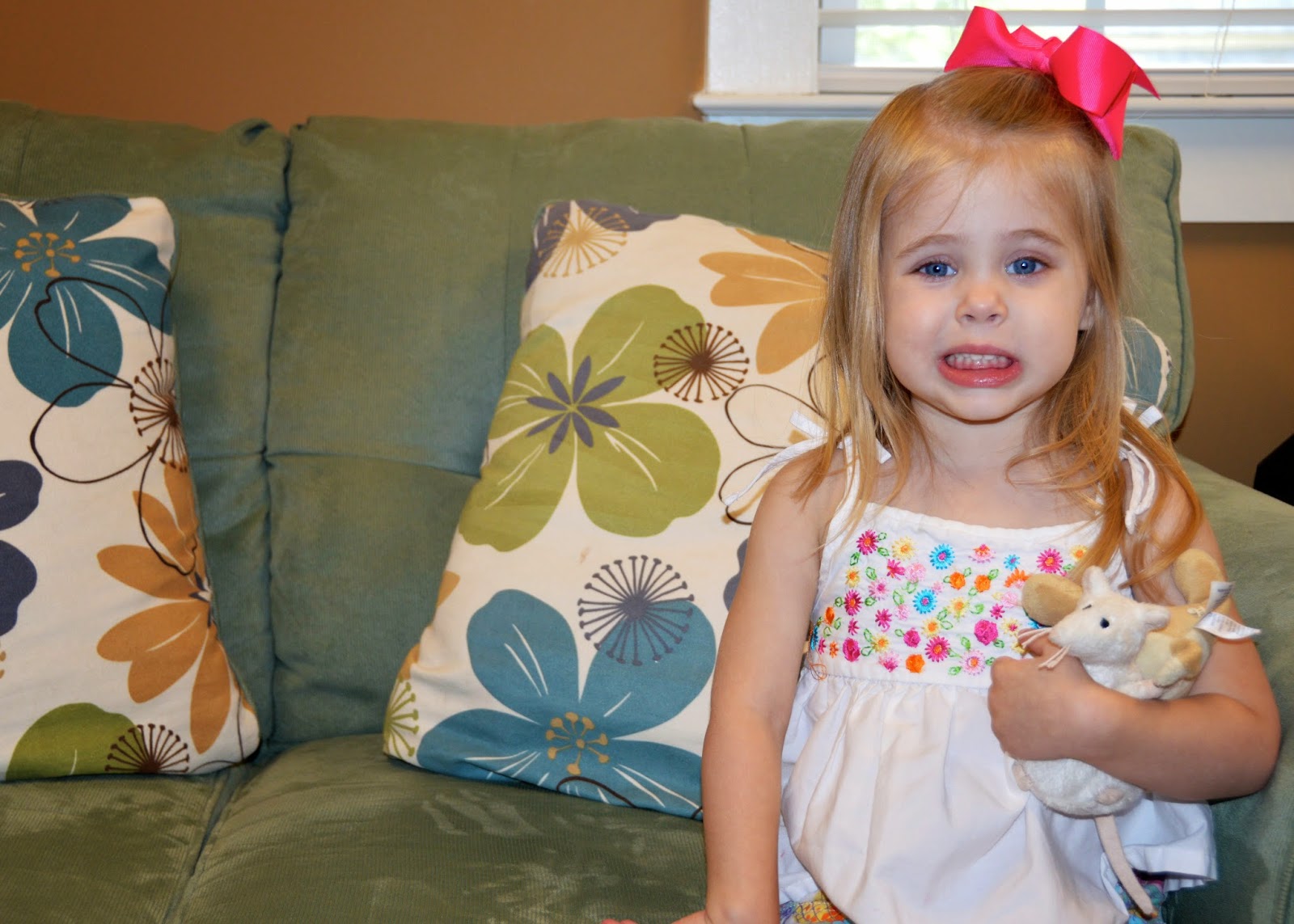 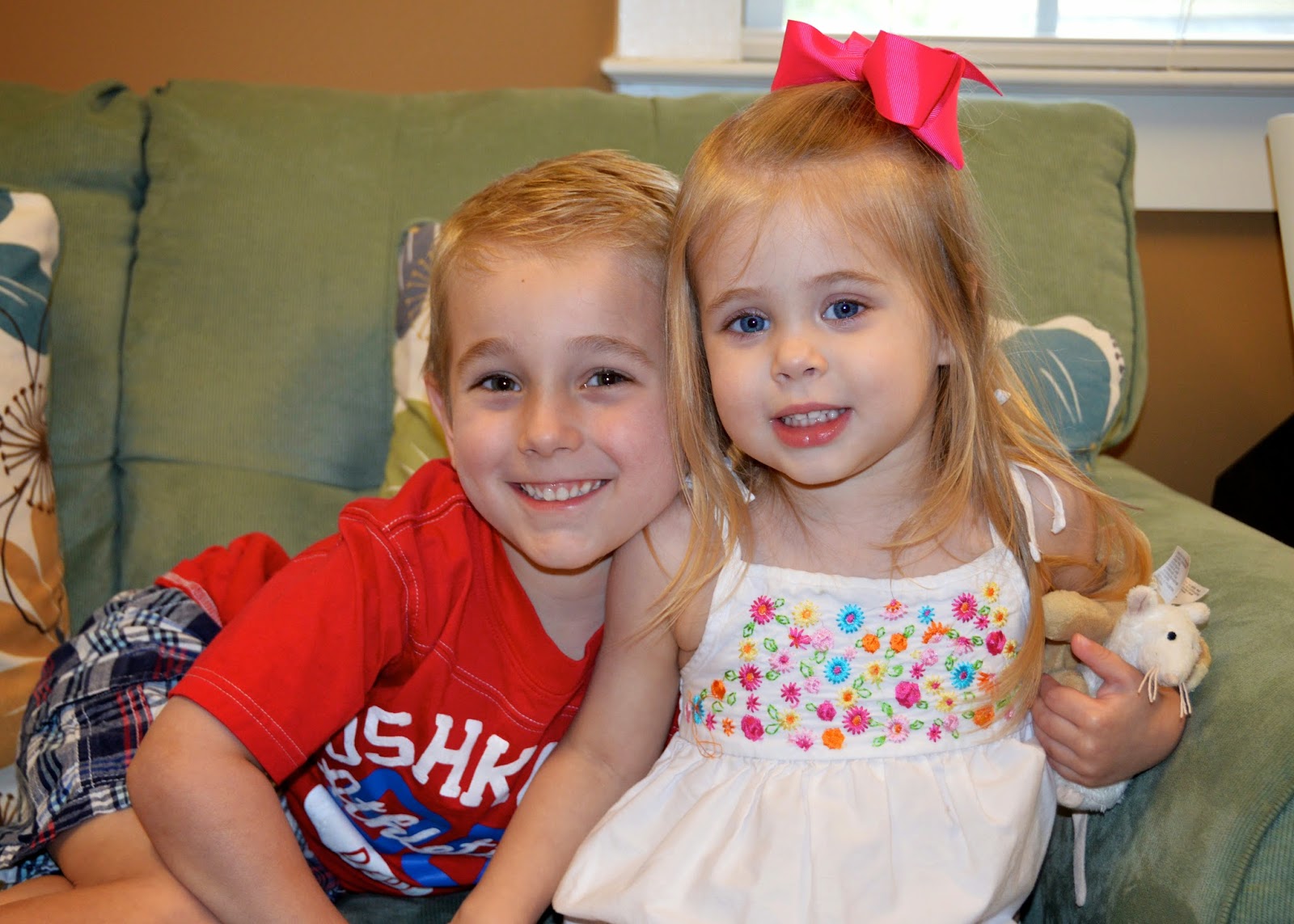 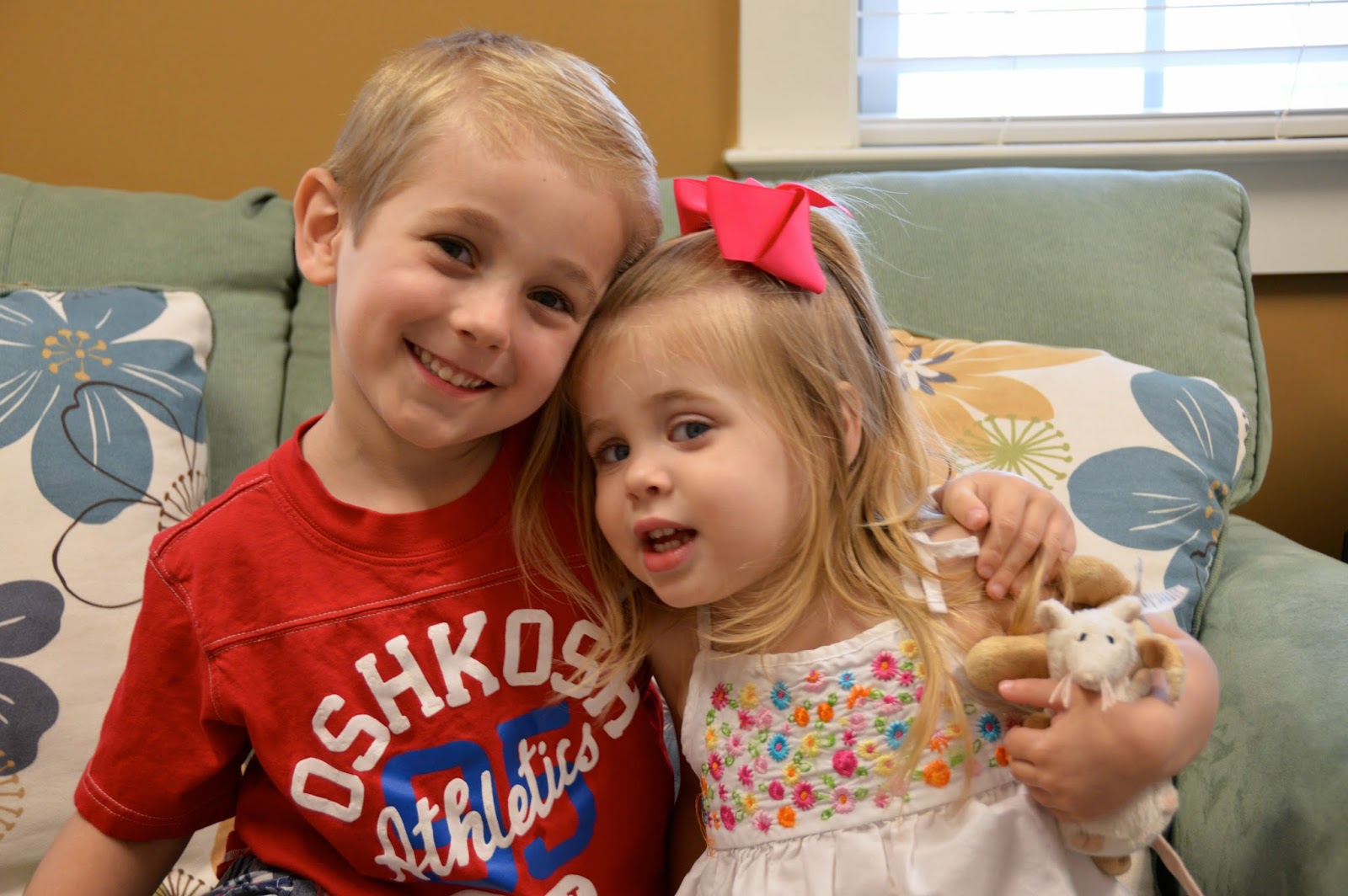 You can tell Zach was pretty much over Britt’s fussiness 😉 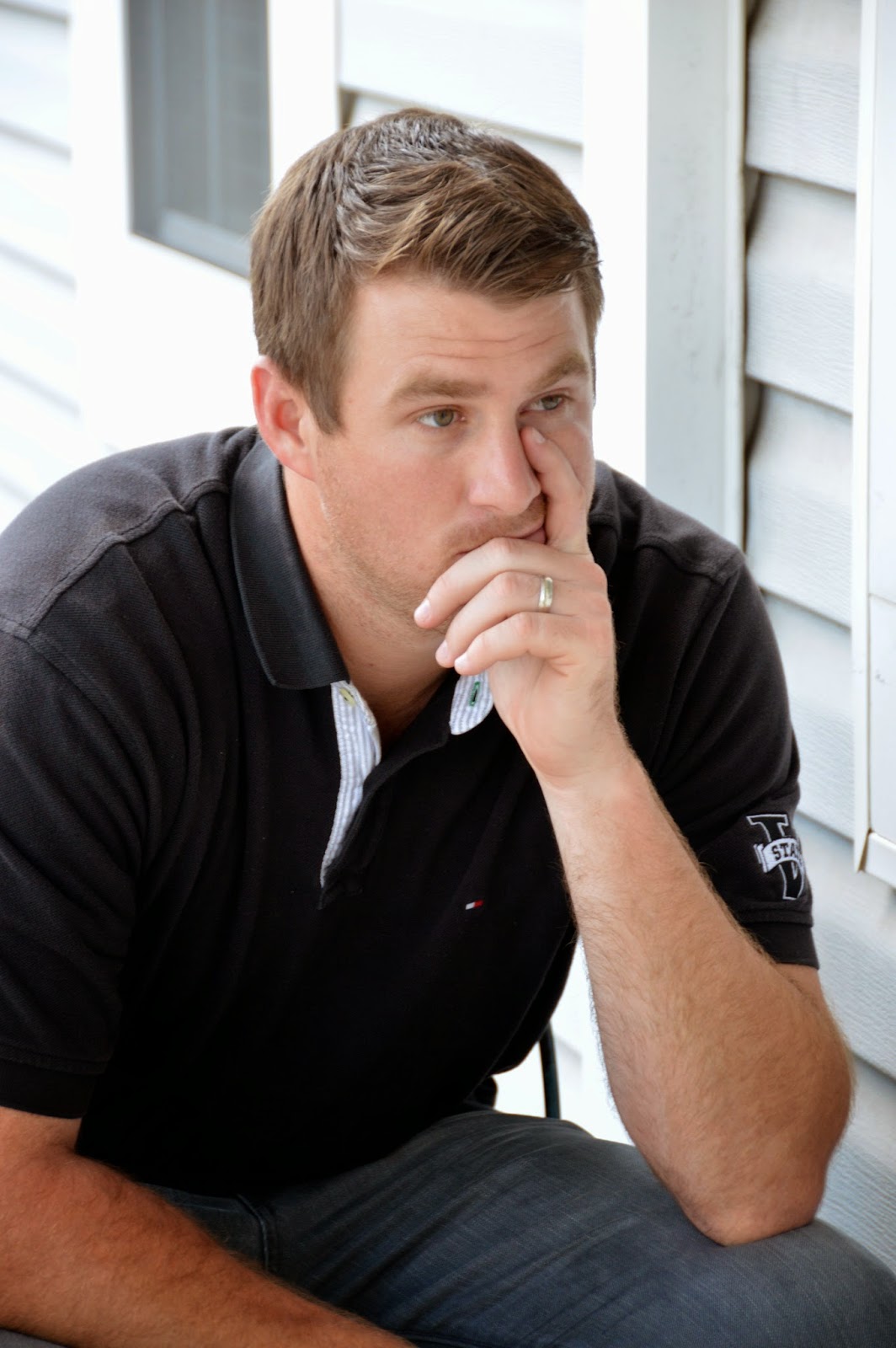 At our last visit Leo was facing my spine so it was tough to get him or her moving around so we could get some pictures. This time was the same way! Child must just really love that position! He or she wasn’t as lazy this time, thankfully and we were able to get Leo to move very quickly to where he or she needed to be for the best pictures!

Britt’s favorite part is hearing the heartbeat…it was only in the 130s! 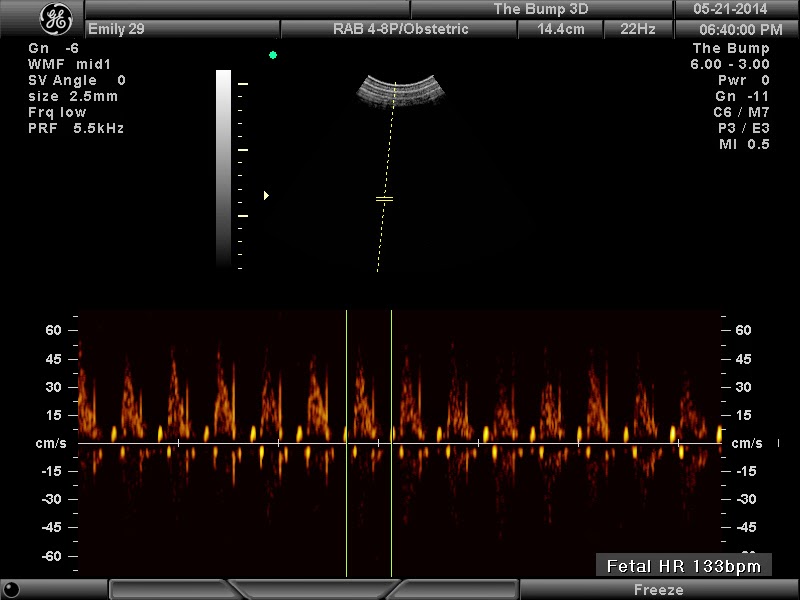 If you are scheduling a 3D/4D ultrasound then I FOR SURE recommend scheduling it between 29-30 weeks. I scheduled it earlier this time because Britt’s was later and I didn’t like how they turned out, but I think this time around this was the perfect time to see our sweet baby! I’m SUPER appreciative to have the opportunity!

When we first started going thank the LORD she remembered we don’t find out the sex! Zach and I both completely forgot to remind her about it and she happened to remember at just the right moment!!!

Here’s our pictures of sweet baby #3! 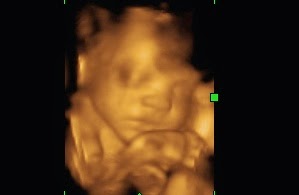 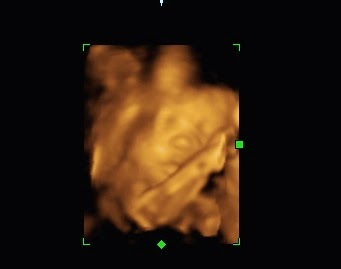 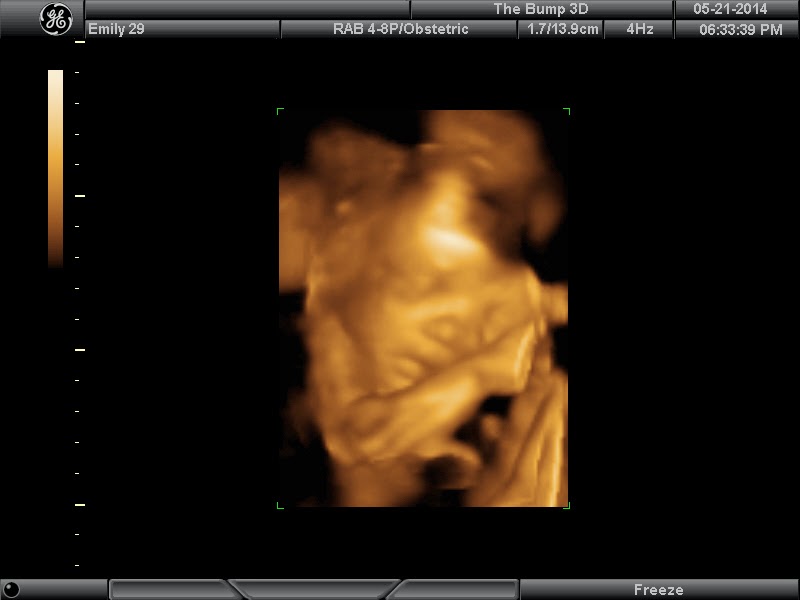 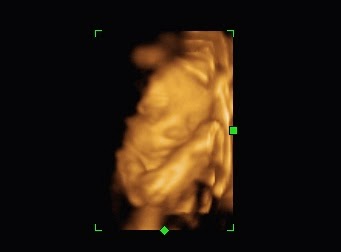 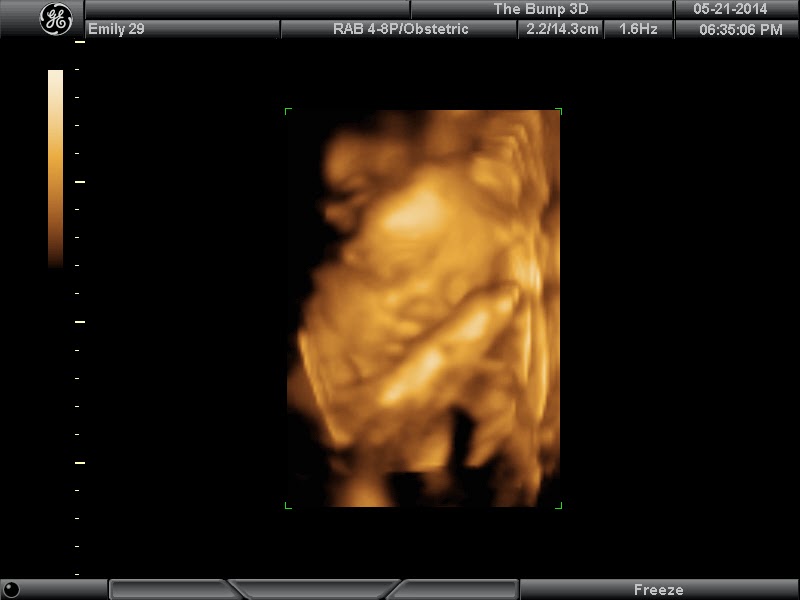 I LOVE how clearly you can see the facial features in so many of them! 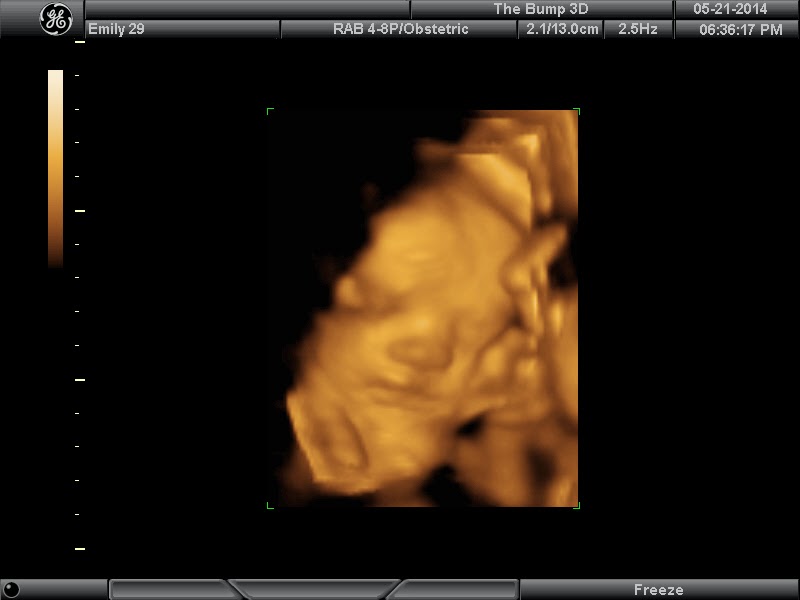 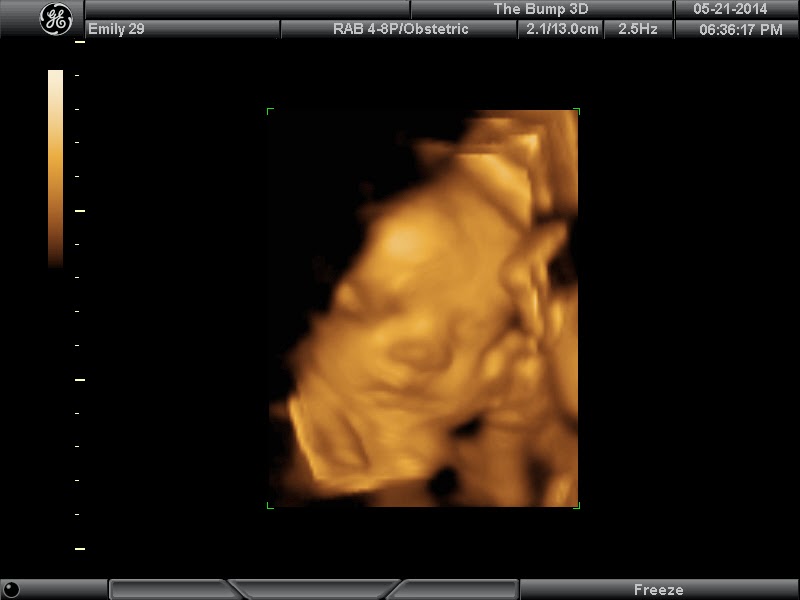 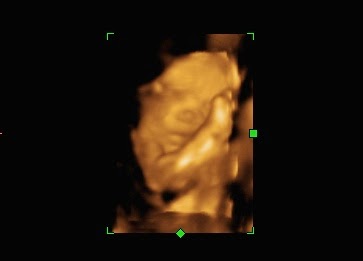 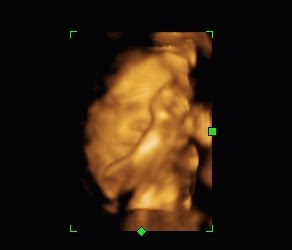 The big blob is actually a KNEE! Child was completely in a ball…which I think happens often with him or her b/c it HURTS when I feel kicks and I bet that’s why! 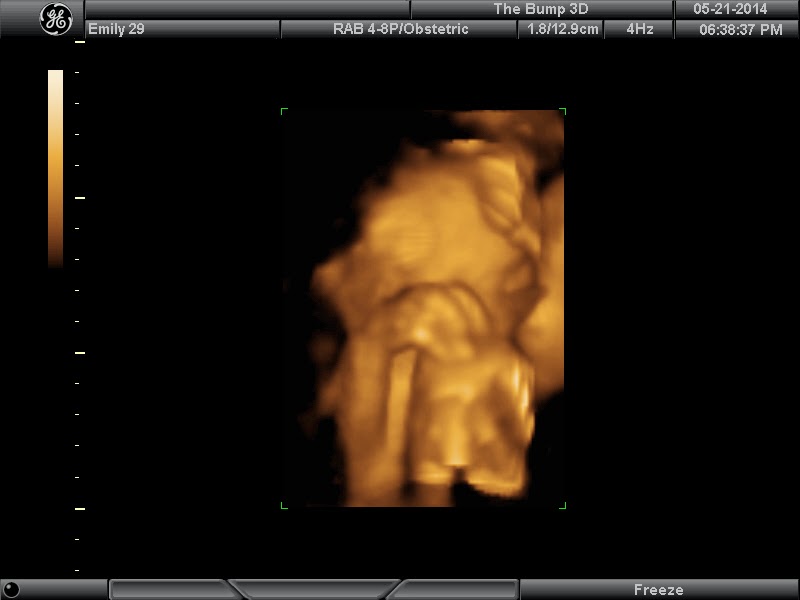 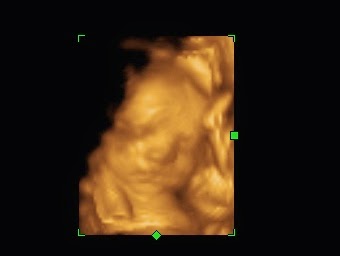 I can’t get over the cute little nose and that FULL bottom lip! It looks so much like Zach’s lips to me with Britt’s nose! 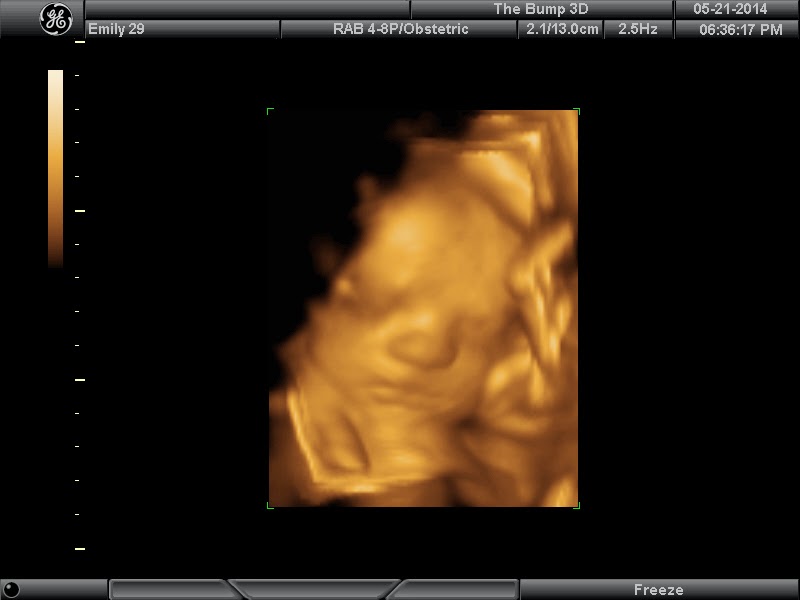 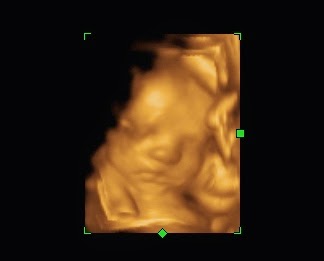 My favorite! The cheeks don’t look NEALRY as chubby as they did last time…I LOVE the jaw line! 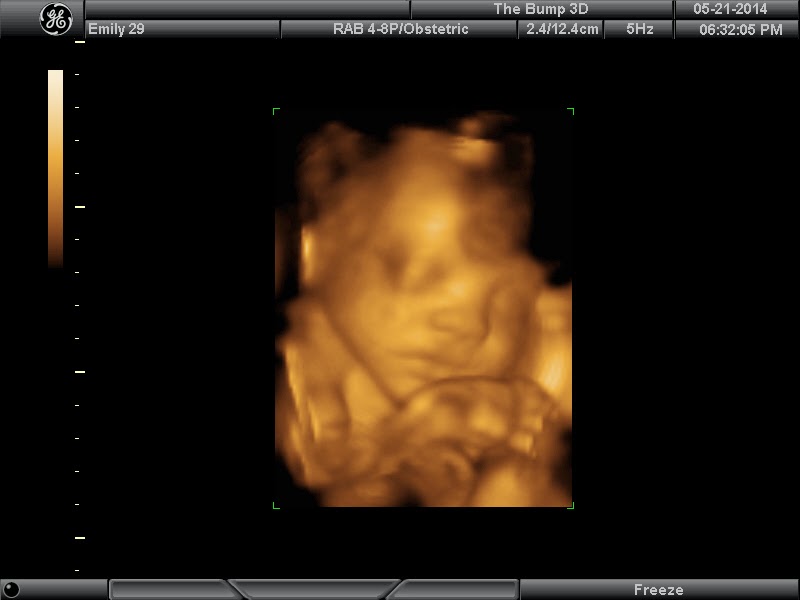 I am so, so thankful we were able to see our baby again. I’m not sure why exactly but seeing Leo this time has made me SO emotional. I couldn’t stop thinking about it all night. Maybe because the pictures were SO clear? Like I can picture in my mind exactly what he or she is going to look like at birth after seeing these! I feel so many different things. On the one hand it makes me SO EAGER to hurry up and hold my baby. To see if it’s a “he” or “she” and to get to cuddle with him or her! On the other hand it was like a realization that pregnancy is coming to an end. There is a real possibility that I will only get to be pregnant one more time after this so I want to savor these days and those sweet baby kicks as much as possible!

I am beyond appreciative to The Bump for having us back and I HIGHLY recommend them to anyone in the area! They have several different packages to choose from. The people who were there before us were finding out the gender and the people after us said they did a three session package where they got to see their baby three different times during pregnancy. We just did a very basic package but did add on the heartbeat stuffed animal which has been a HUGE hit around here! Both kids LOVE to hear the baby’s heartbeat and I think it’ll be neat to see how the baby likes it? 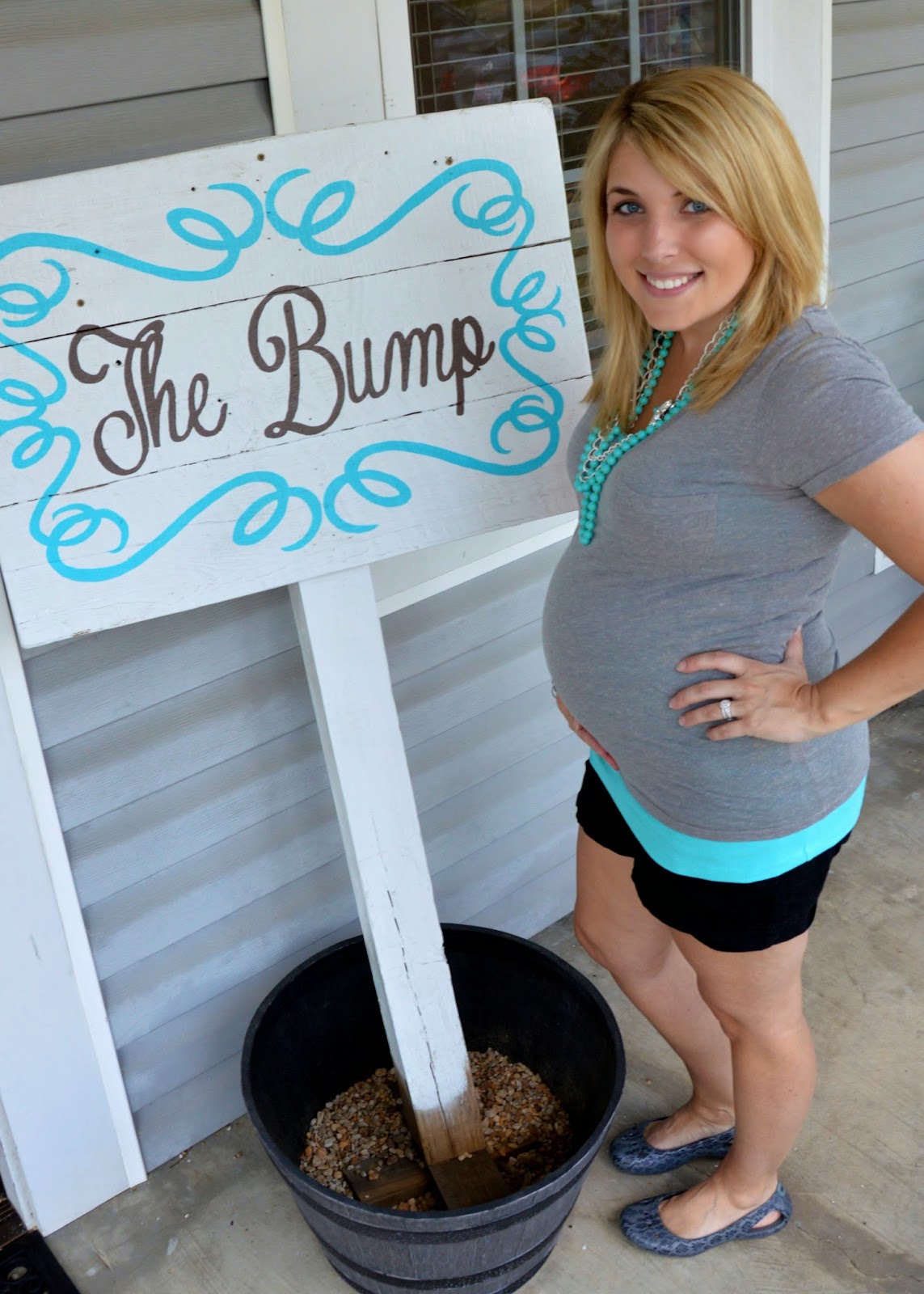 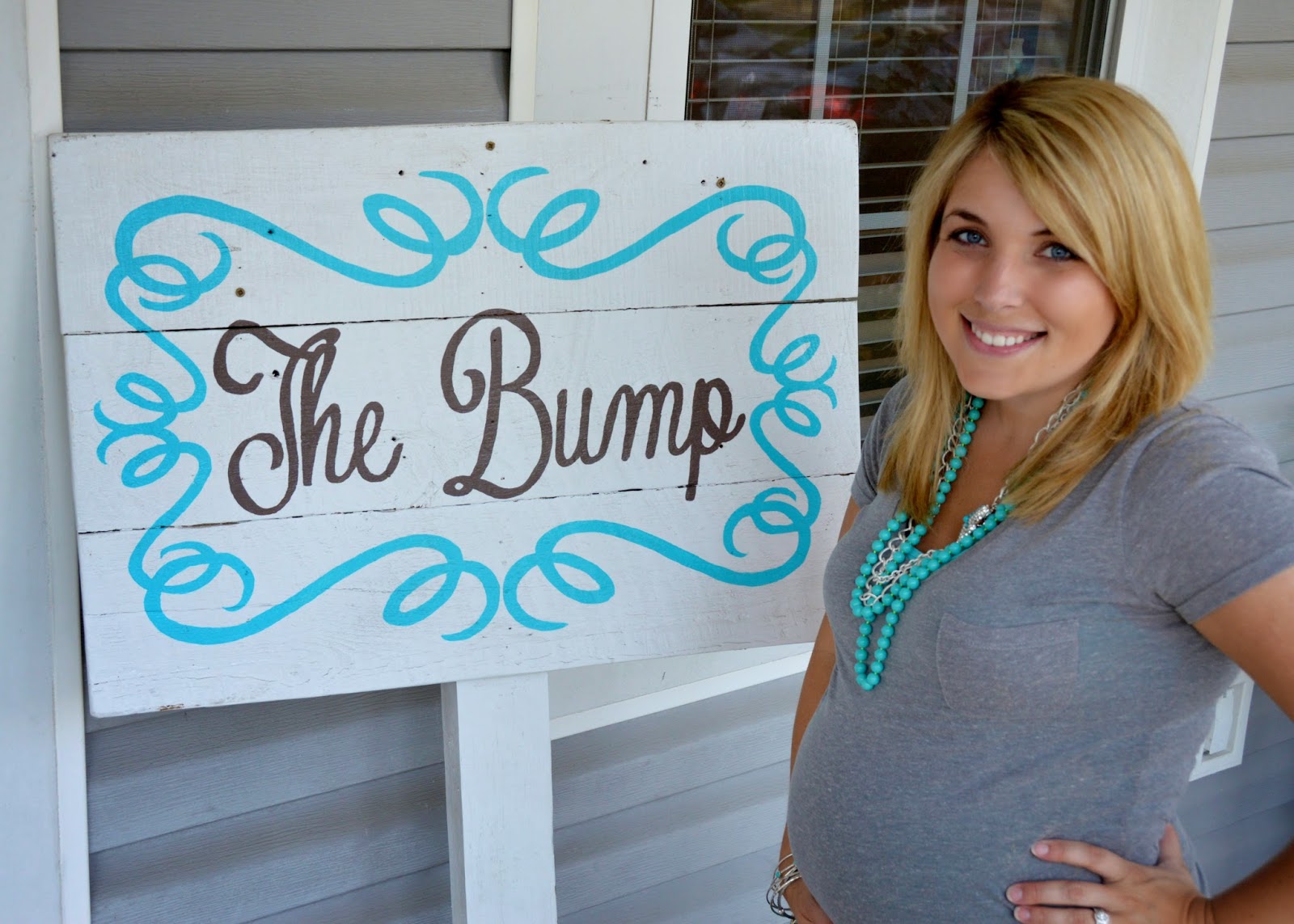 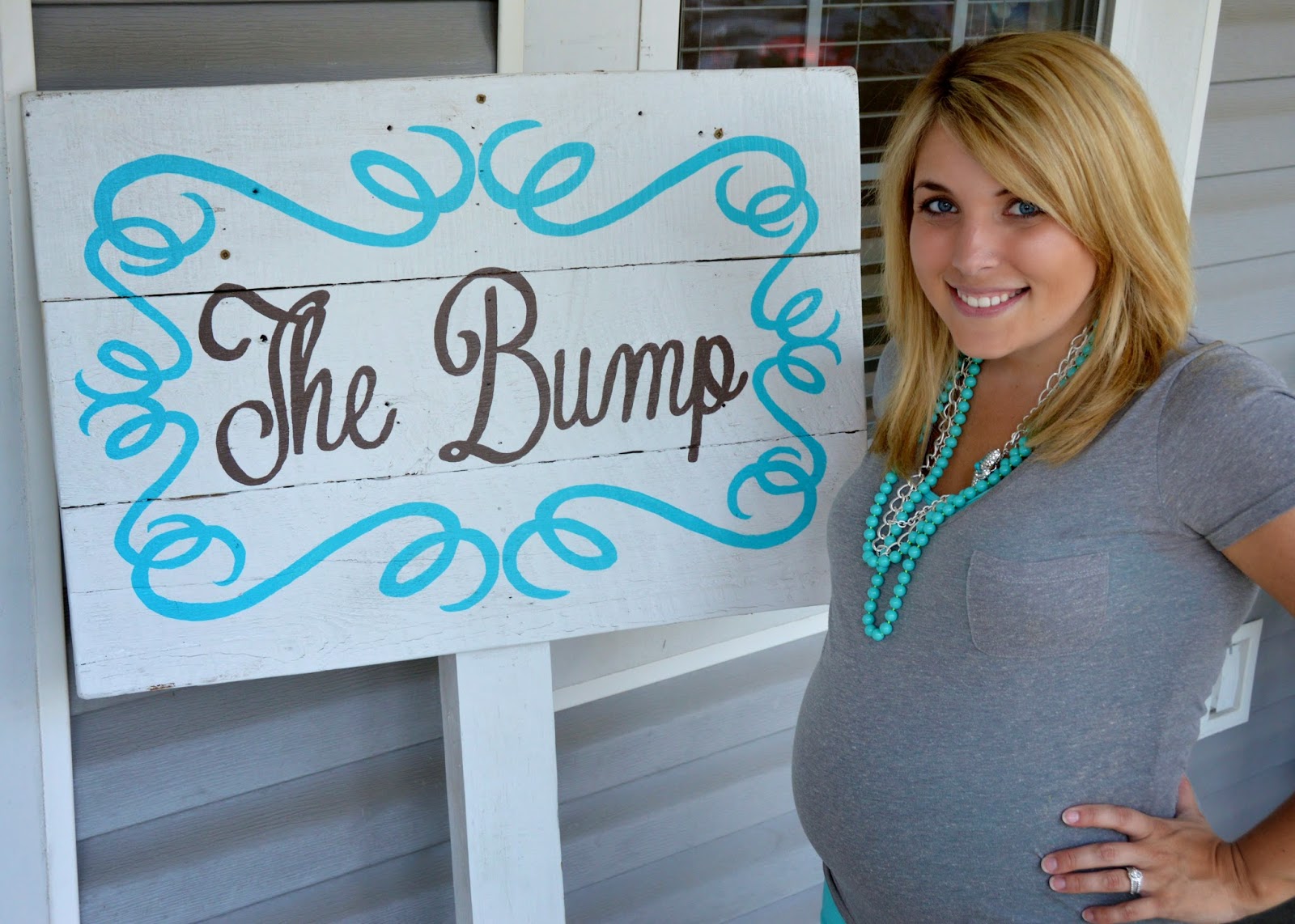 So you know I had to do it! Gotta have another comparison picture to see who Leo looks more like!!! Zach and Kye both think Leo looks like a boy. I took the pictures to church after our appointment and showed them to a couple friends of mine in my bible class and one said instantly that Leo looks exactly like Britt and the other one said that Leo looks like a boy 😉 So we have mixed reviews! I see a combo of both Kye and Britt…Zach says he thinks Leo is a boy who is going to favor him more (whereas Kye does look more like me than Zach). Maybe he just has wishful thinking? I honestly can’t tell if I think it’s a boy or a girl by the images? Britt looked SUPER feminine in her ultrasound pics but I think Leo could go either way? I do see Britt’s nose and I do think those lips look like Zach’s (smaller upper lip and VERY full bottom lip). Can’t wait to hear your thoughts!!! 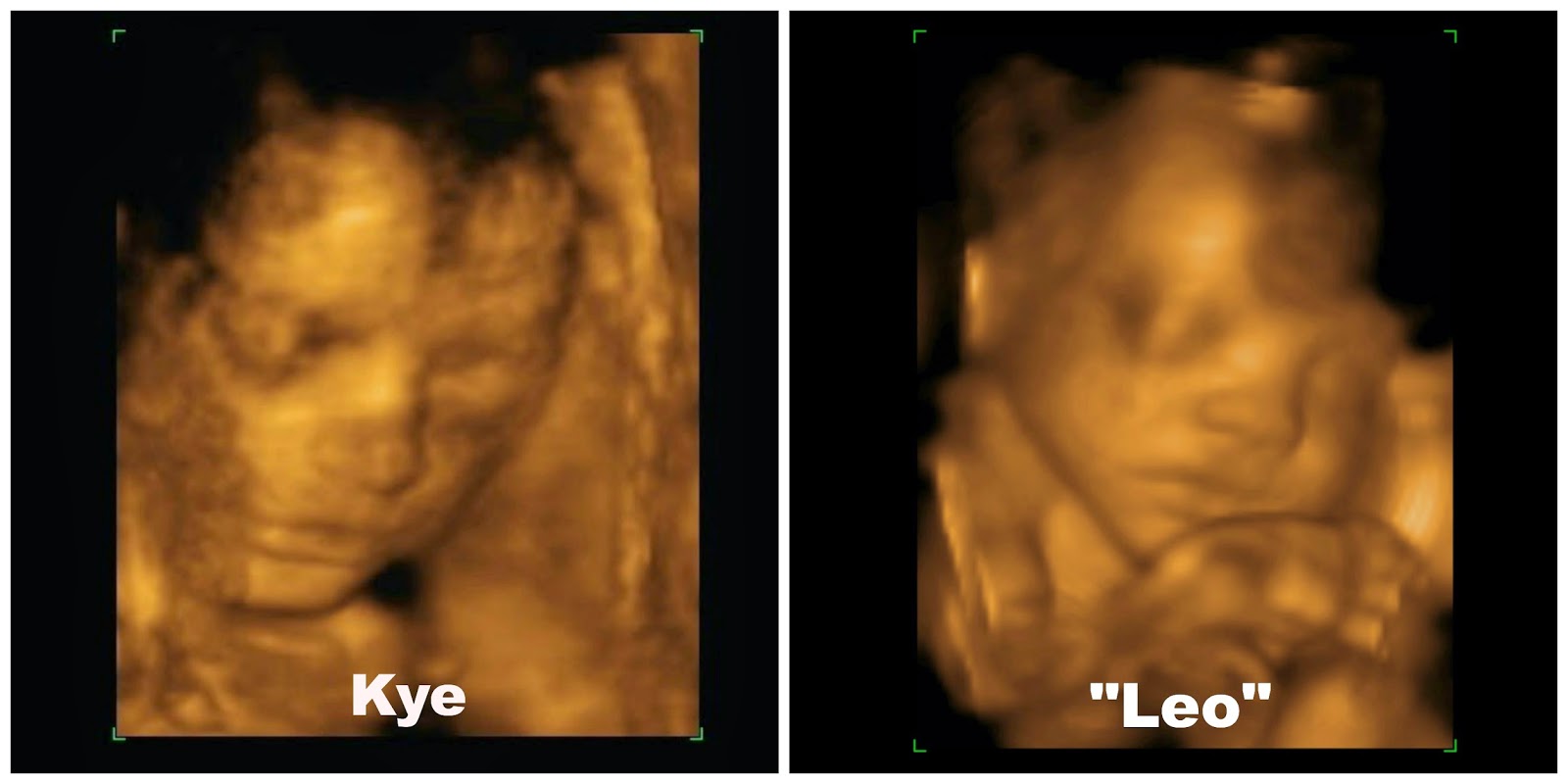 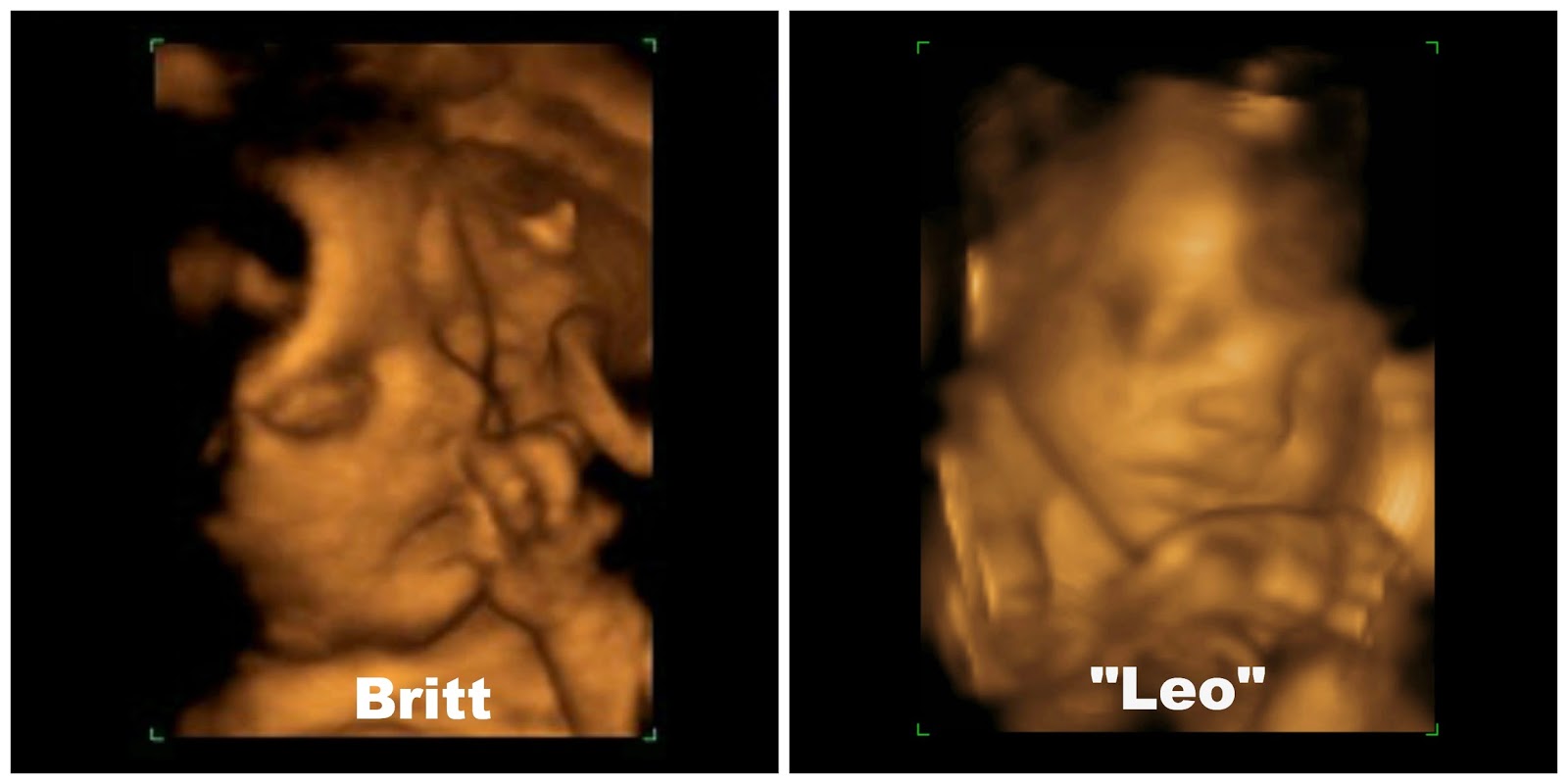 Thanks SO MUCH again to The Bump for a great experience and awesome pictures of our newest blessing!