This whole food thing has been a little tough for me. First it was hard to figure out how to even begin, then it was a tough choice on when to start. Kye is still young to be eating baby food. Most books recommend to wait until they are 6 months old and Kye is only 4 1/2 months old! However, he is a big boy and he showed all the signs of being “ready.” So I knew it was what is best for him, however, it was still tough!!! Eating solids is a big step for a baby! It’s the first step to being done with nursing. It’s also the first time that I will really start to be responsible for how he handles himself. Even though it made me a little emotional (no actual tears fell, but they were super close) I knew I needed to just do it so I decided to start with the rice cereal on Friday morning.

I didn’t buy rice cereal when I had gone to Publix but luckily we had some from awhile ago when they gave it out free and we used it once or twice in a bottle (which Kye hated). I decided for the first time eating it I’d mix it with breast milk and I did 1 TBL of cereal and 4 TBL of milk. It was SUPER liquidy so I added a little bit extra of the cereal. 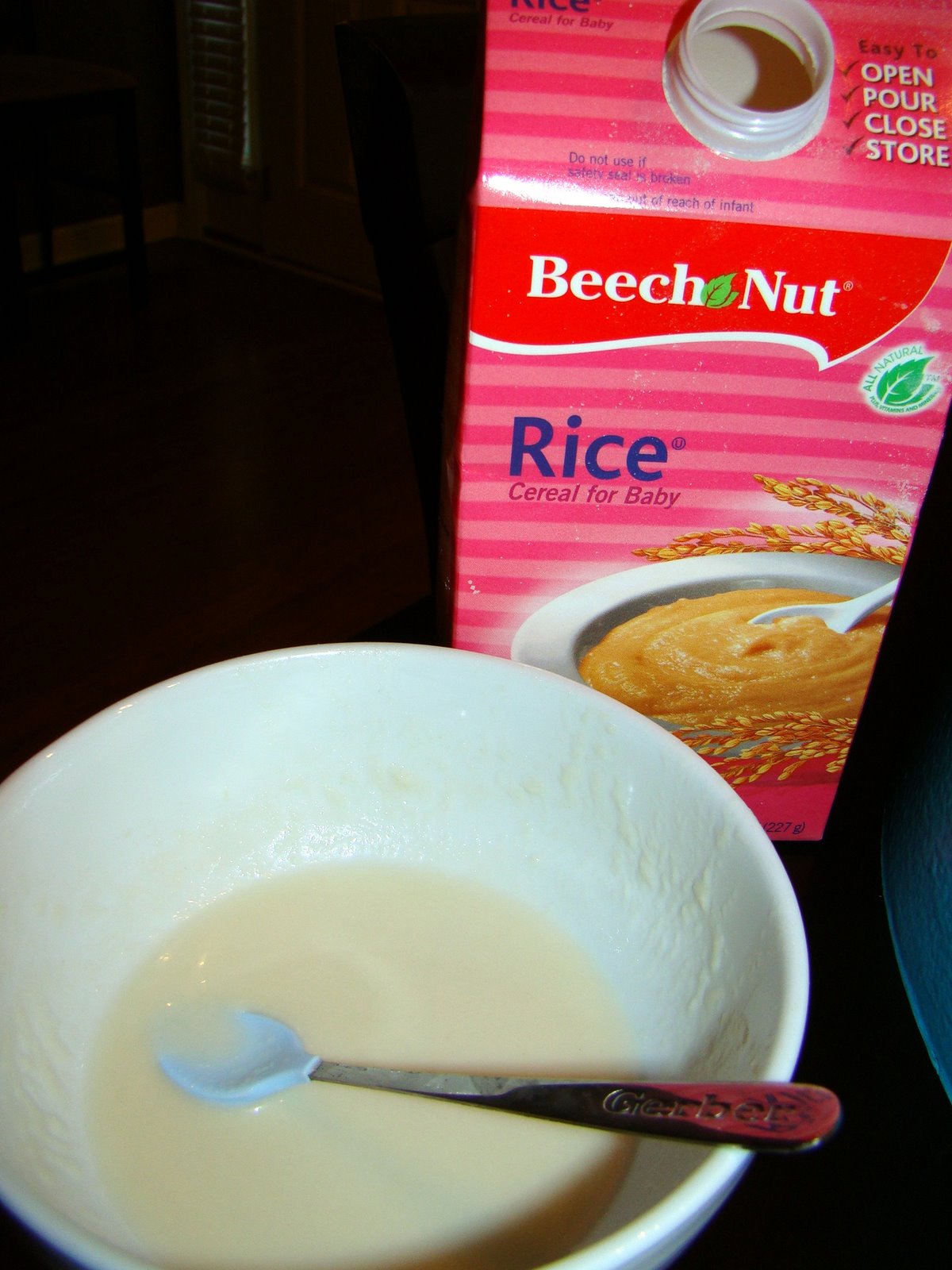 I was pretty pumped to use the feeding bibs and the cute little spoons! Doesn’t Kye look excited? I think he really did know that it was finally HIS turn to eat! 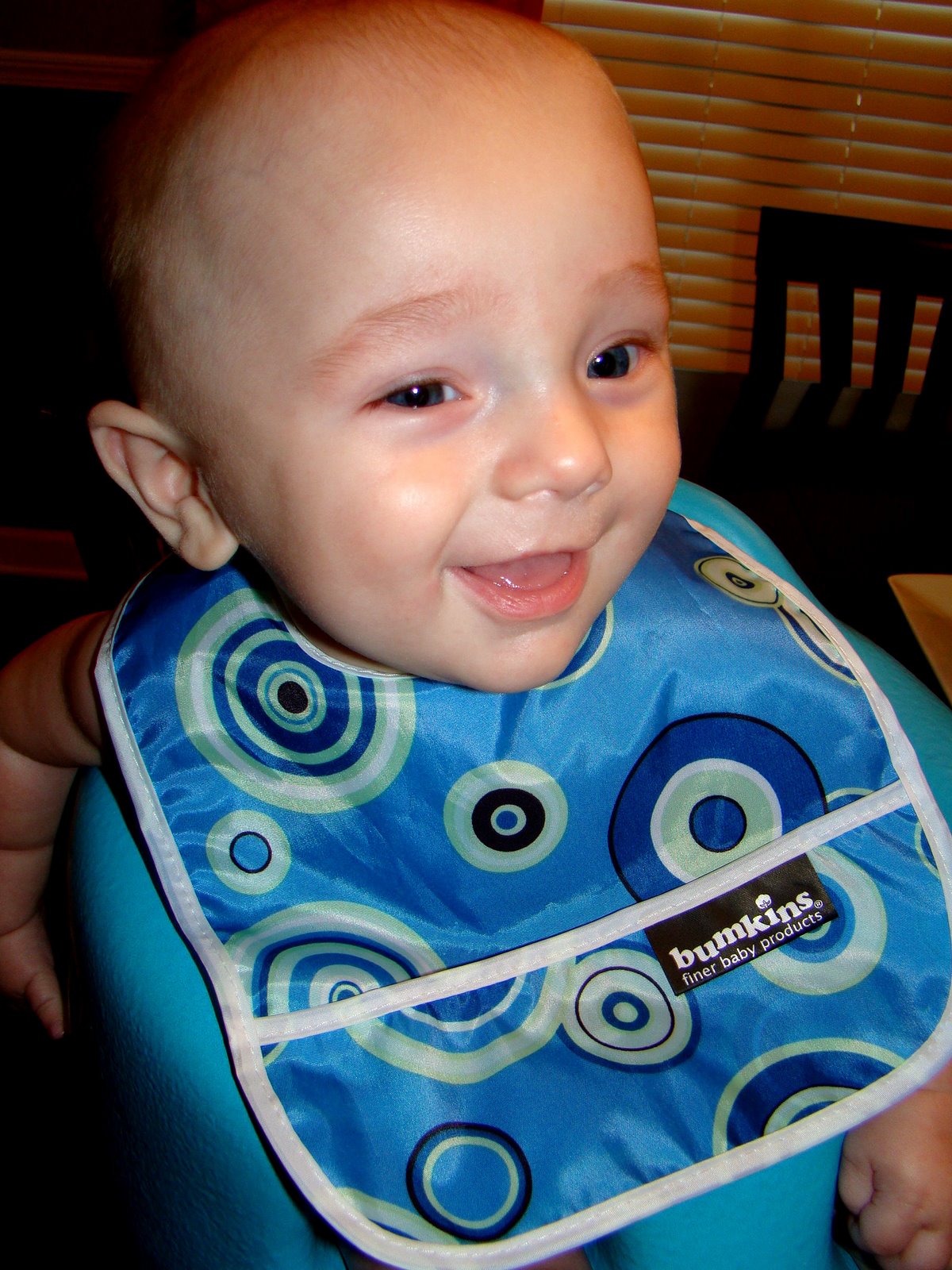 Eating the bib he was so pumped! 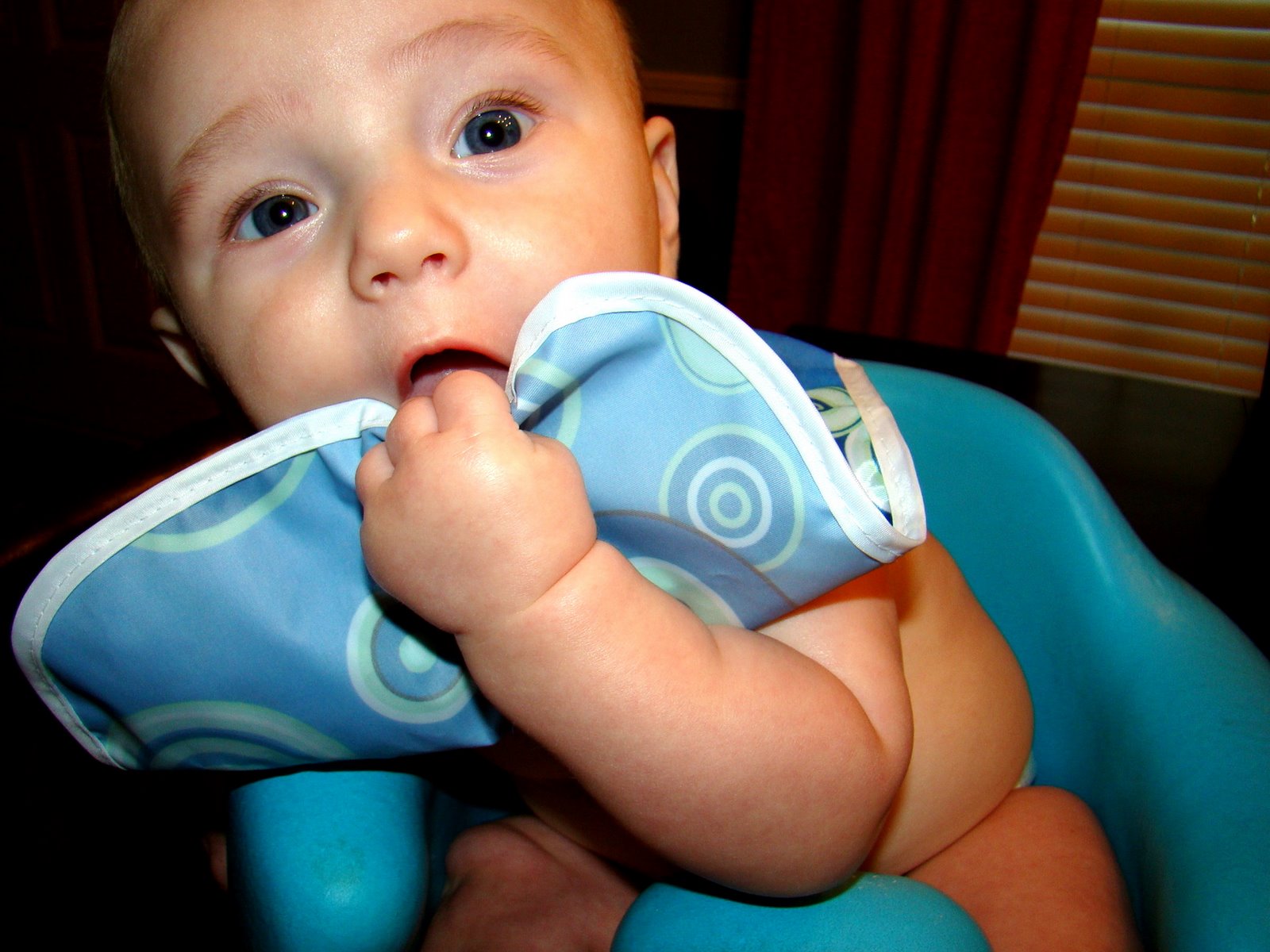 I got him up at 7 and nursed him like usual but didn’t have the typical 25 min or so playtime in my lap. Instead I got him up and going for the big boy food! Here’s his very first bite! 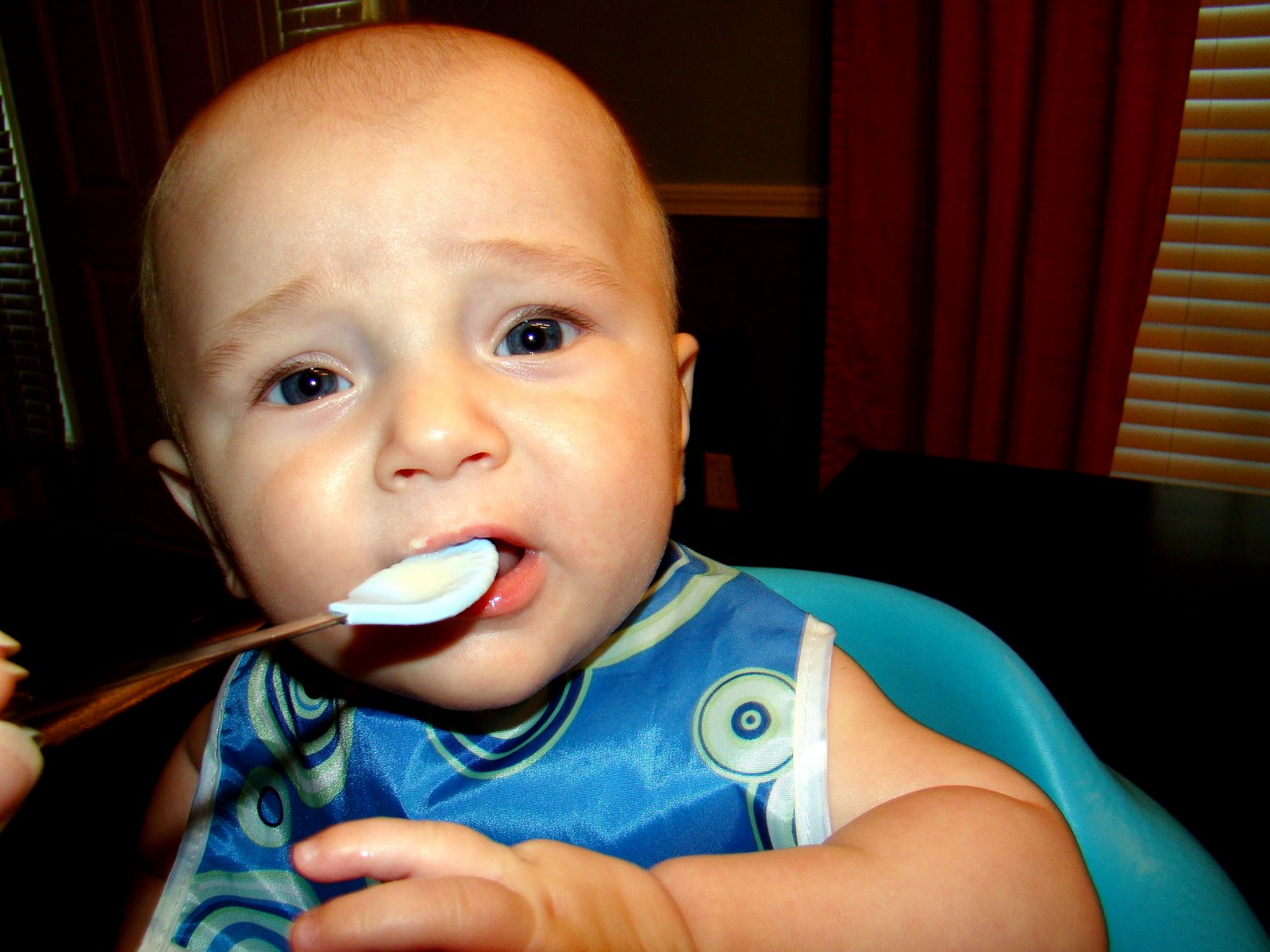 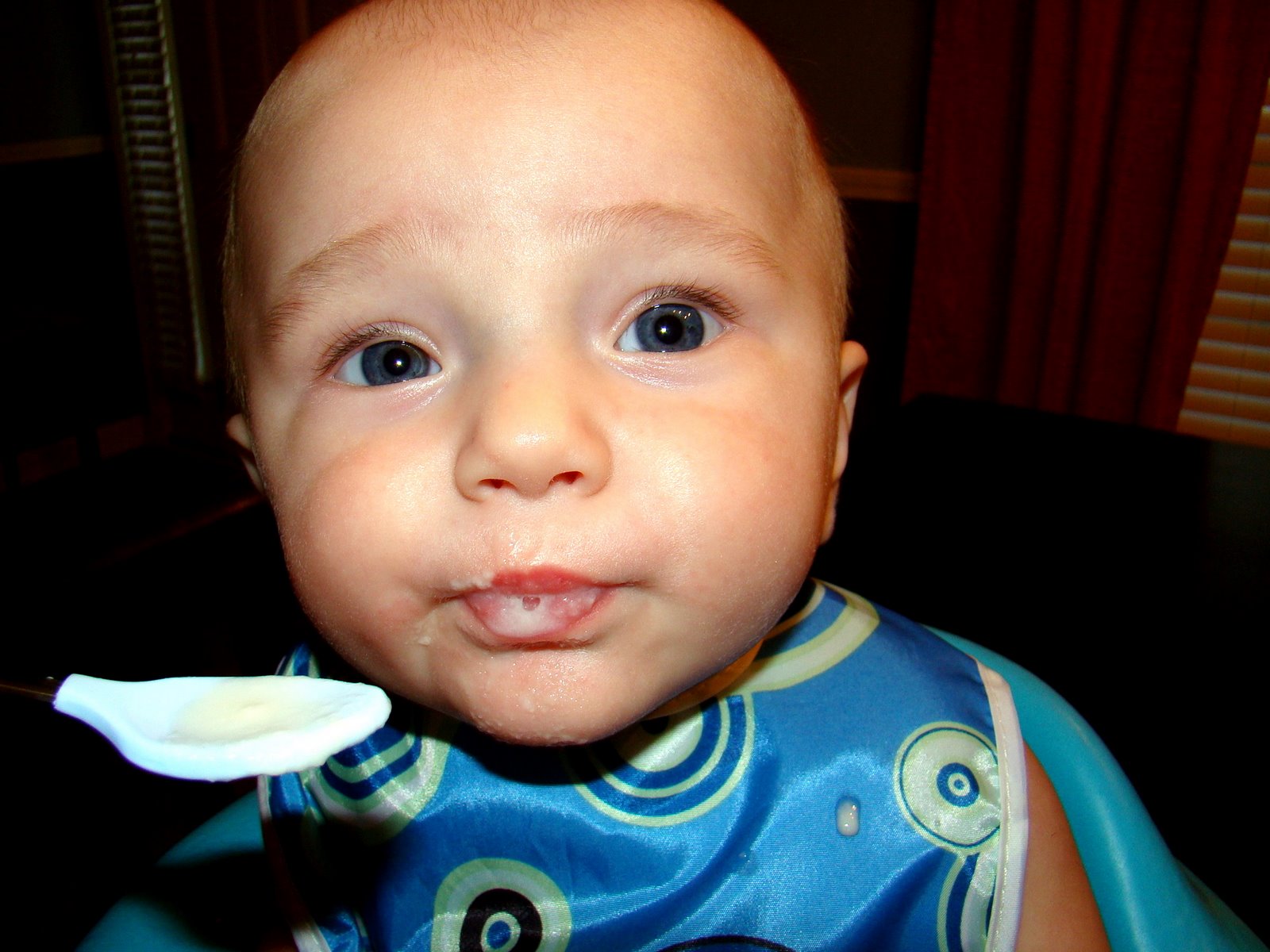 I was really impressed because I thought it’d be a HUGE mess and surprisingly most of it made it into his mouth! He for sure is past the push-out reflex as he did well with the spoon and quickly understood how the whole thing worked. 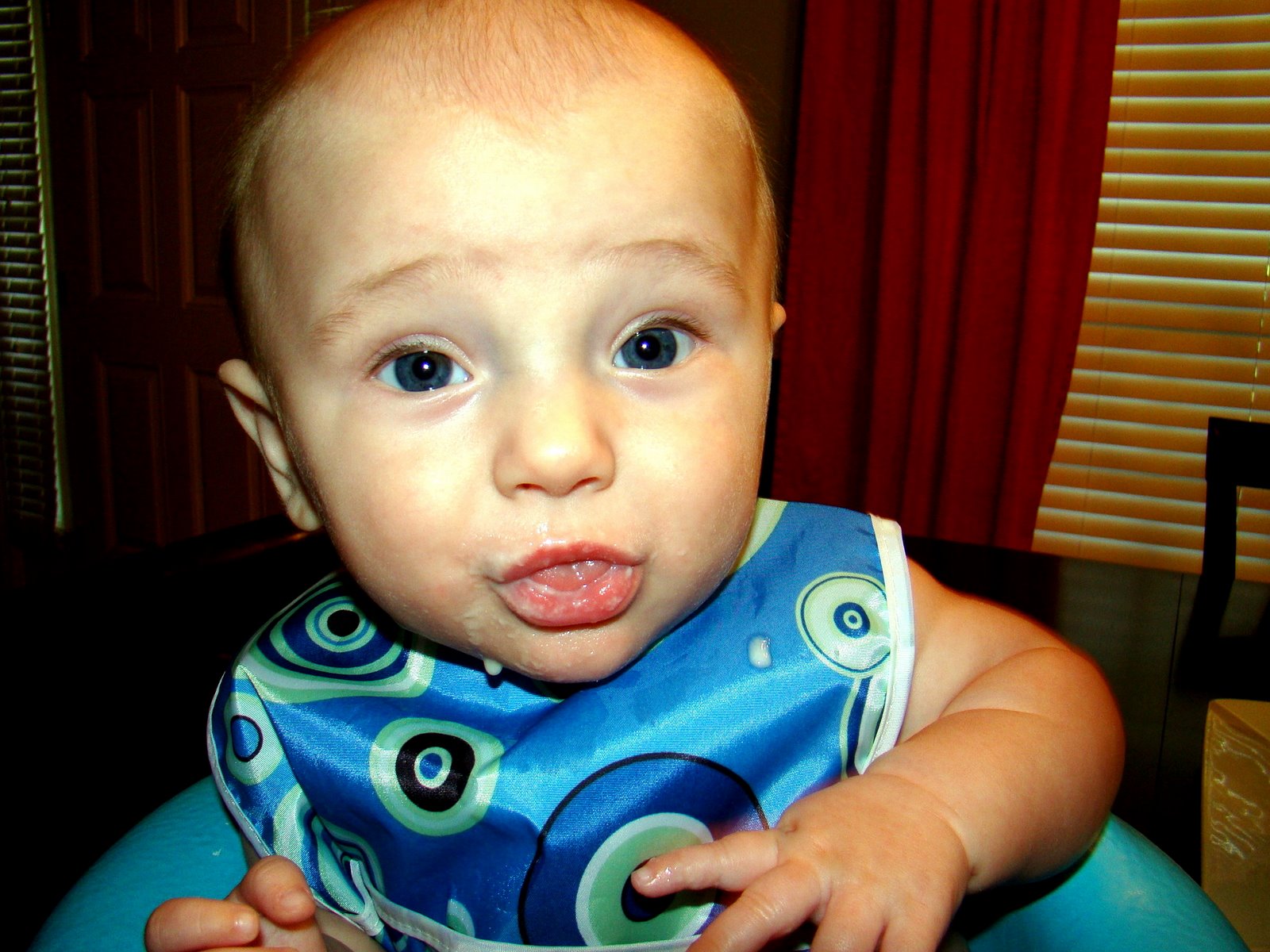 He wanted to help Mommy! 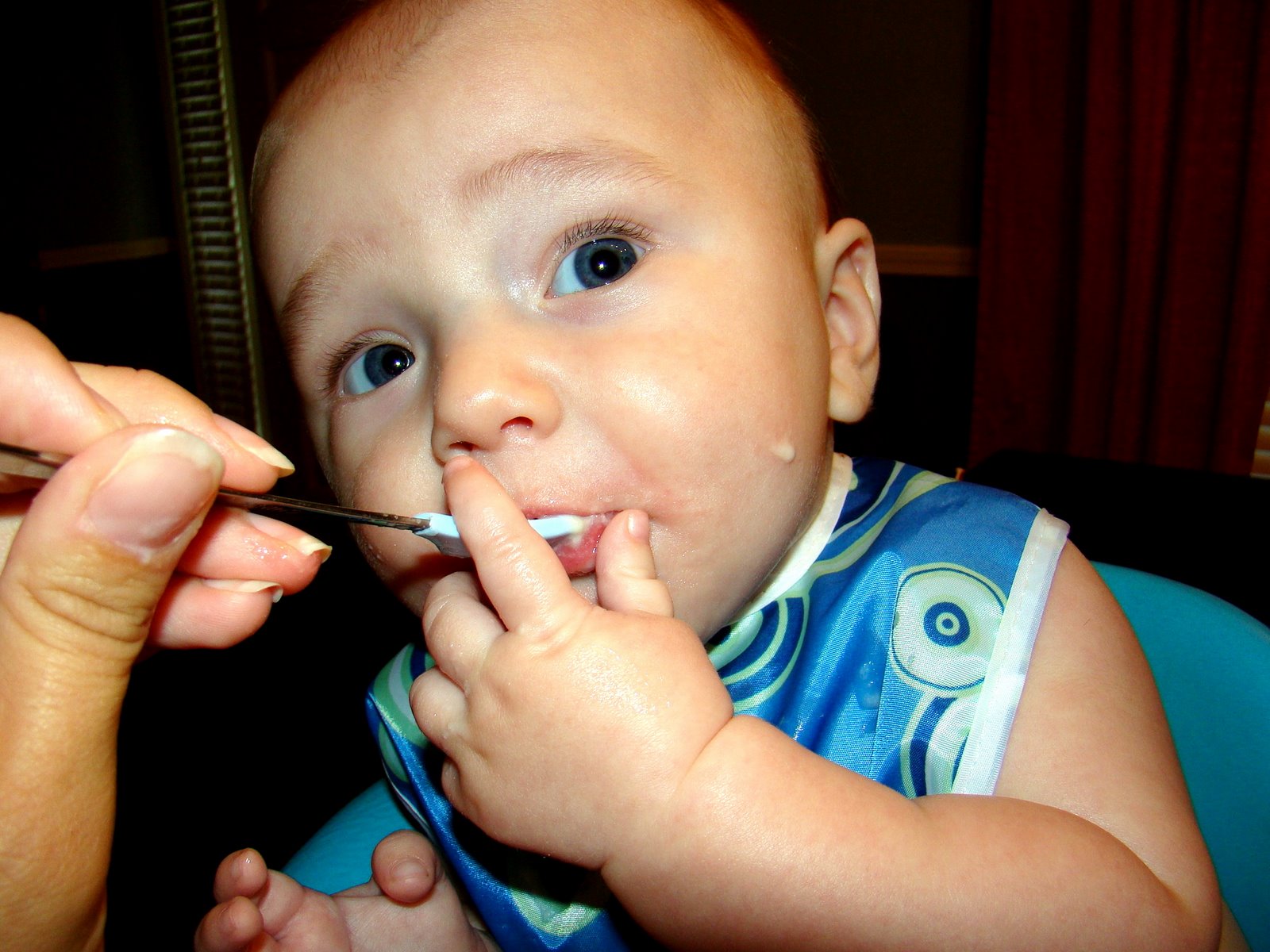 Babywise II talks all about how the “highchair” (Bumbo for now!) is the first place you start to teach your child how to properly behave. You decide the rules and then you have to enforce them. Well when I fed him I hadn’t read that yet! I read it that day and have decided I will not allow: his hands up in his face/grabbing the bowl, spoon, etc, intentionally “playing” with his food by making raspberries with it, and holding the spoon himself. At first I thought holding the spoon would be okay because won’t it teach him to hold it on his own eventually? But I am a big supporter in the idea of parenting not re-parenting (I’ll be writing an entire post on this idea eventually) and I can see him taking the spoon from me being an issue so why let him start now?
I’m kinda glad I hadn’t read that yet because I snapped some pics of him breaking the rules before they were set haha 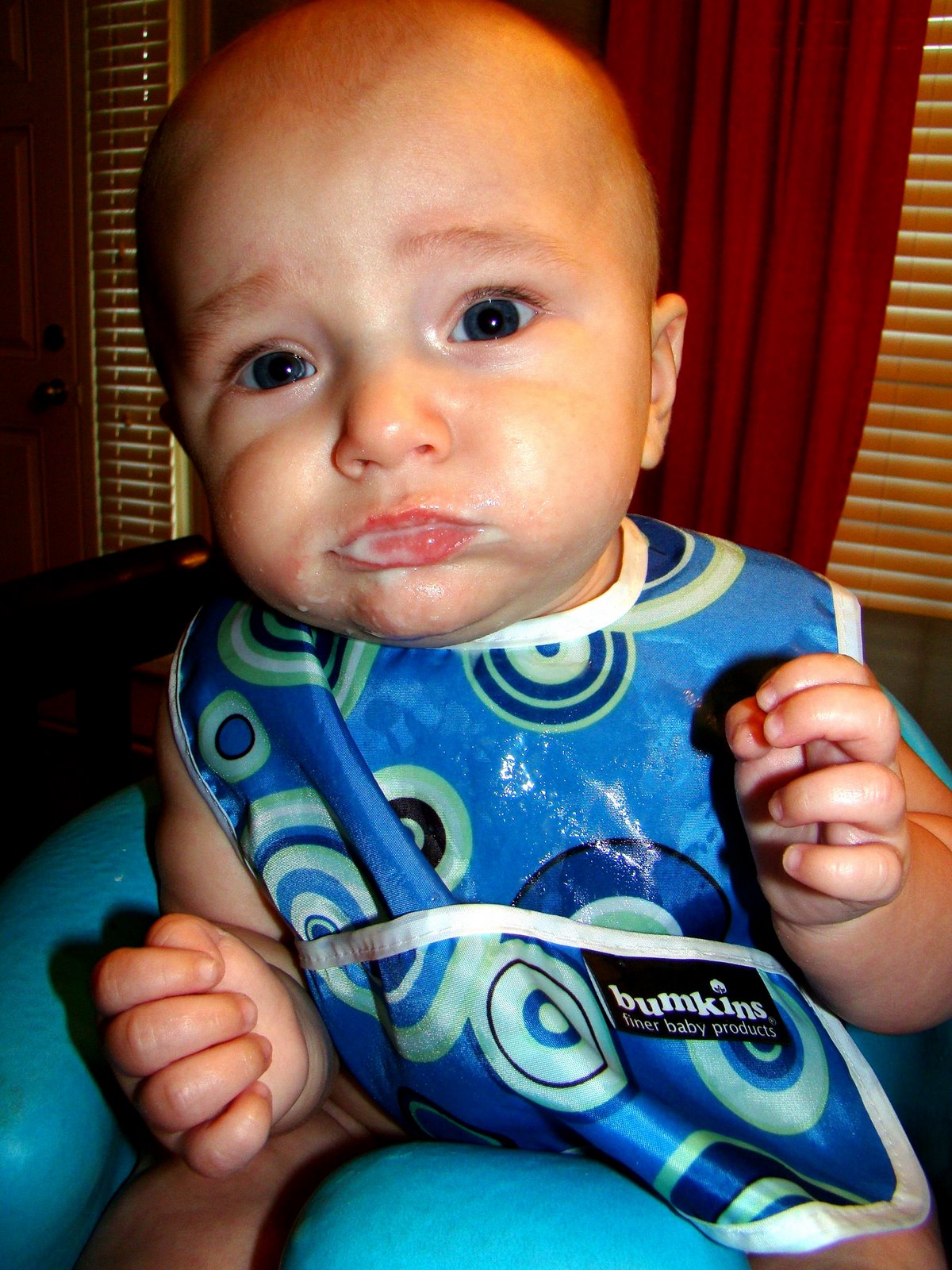 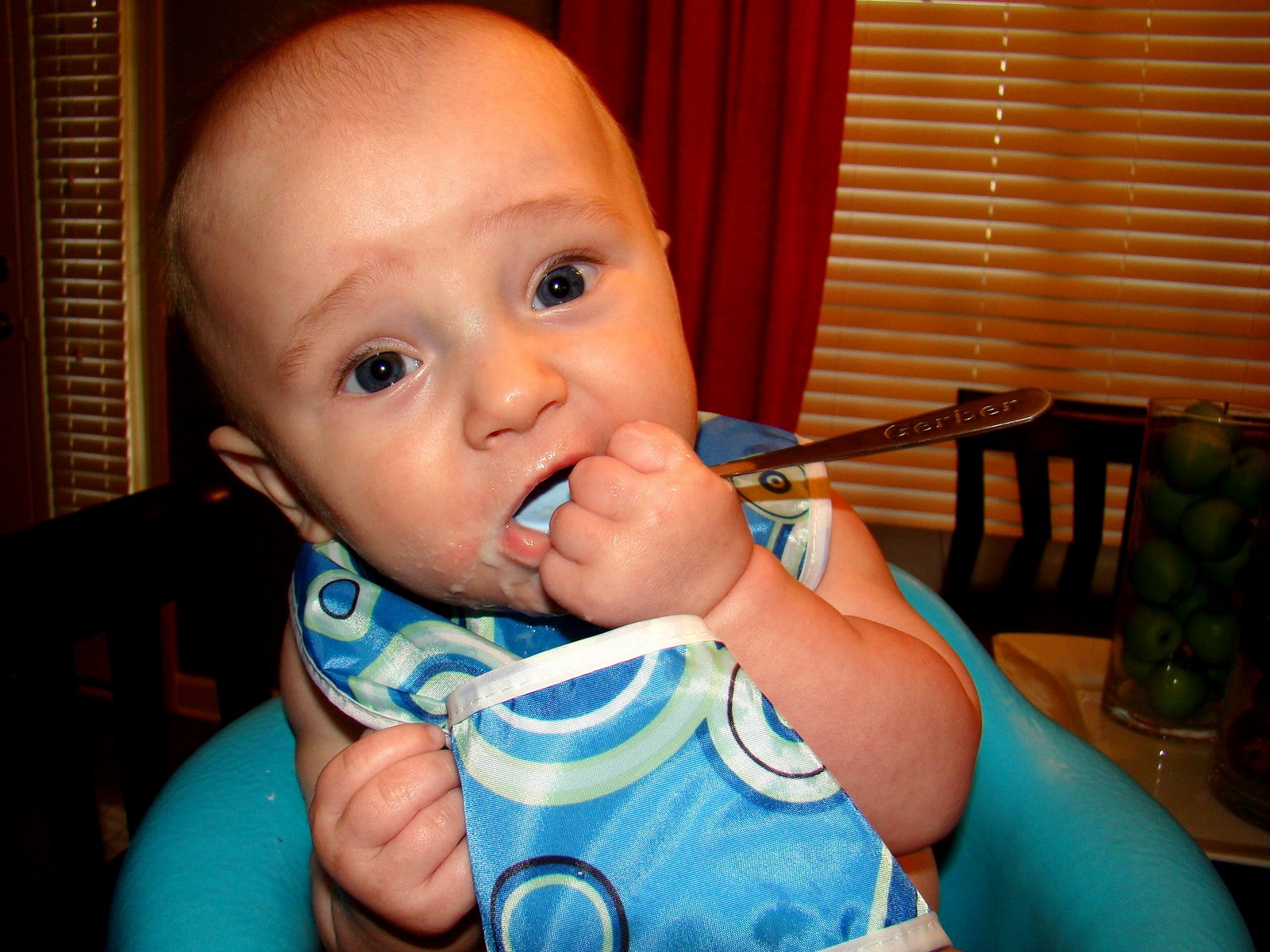 I also really like how Babywise talks about not making eating time into a fun time. It’s not playtime, it’s a time to eat and that’s it. We all think of feeding babies as the time to do “airplane” or whatever while feeding them but what is that really teaching? It’s saying to the child, “Hey! Food time is FUN time and playing with food is fun!” I don’t plan on allowing Kye to play with his food and if he does he will get in trouble. 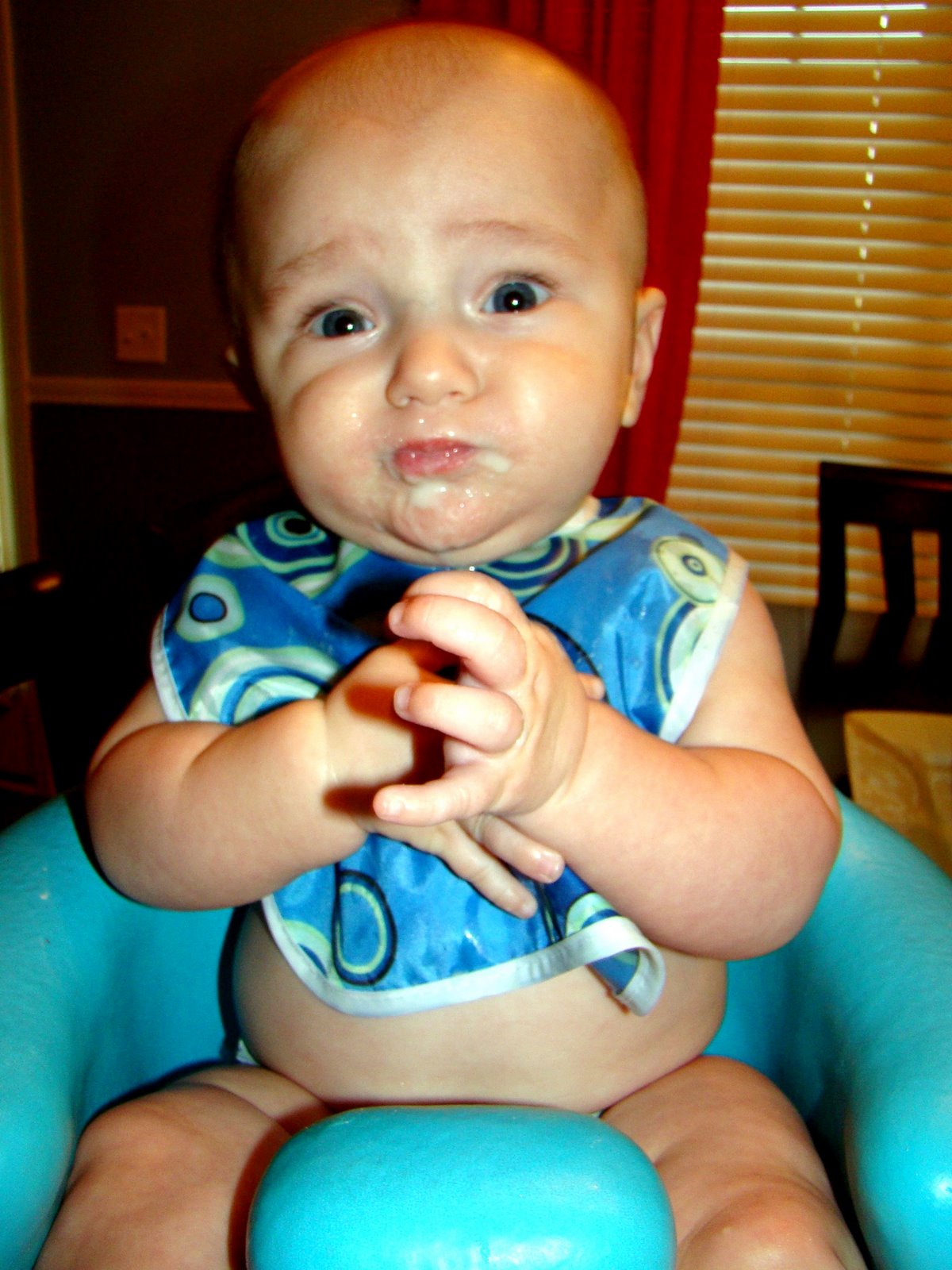 Again, the feeding time brings about changes! With setting rules comes punishment and while Kye is too young to know better right now, I still am going to “punish.” When he puts his hands up in my way I say “hands down” then hold his hands down while I feed him. If he does raspberries with the food (he hasn’t done this yet though) I will push the food back in with my finger and say “no sir we eat our food.” As he gets older I will say these things and if he does it again I will take him away from the table into his crib, etc because if he’s playing then he must be done eating! Ugh…having to teach is so much more responsibility than just playing and having fun like we’ve gotten to do together the past 4 months but I guess this is what parenting is all about huh? 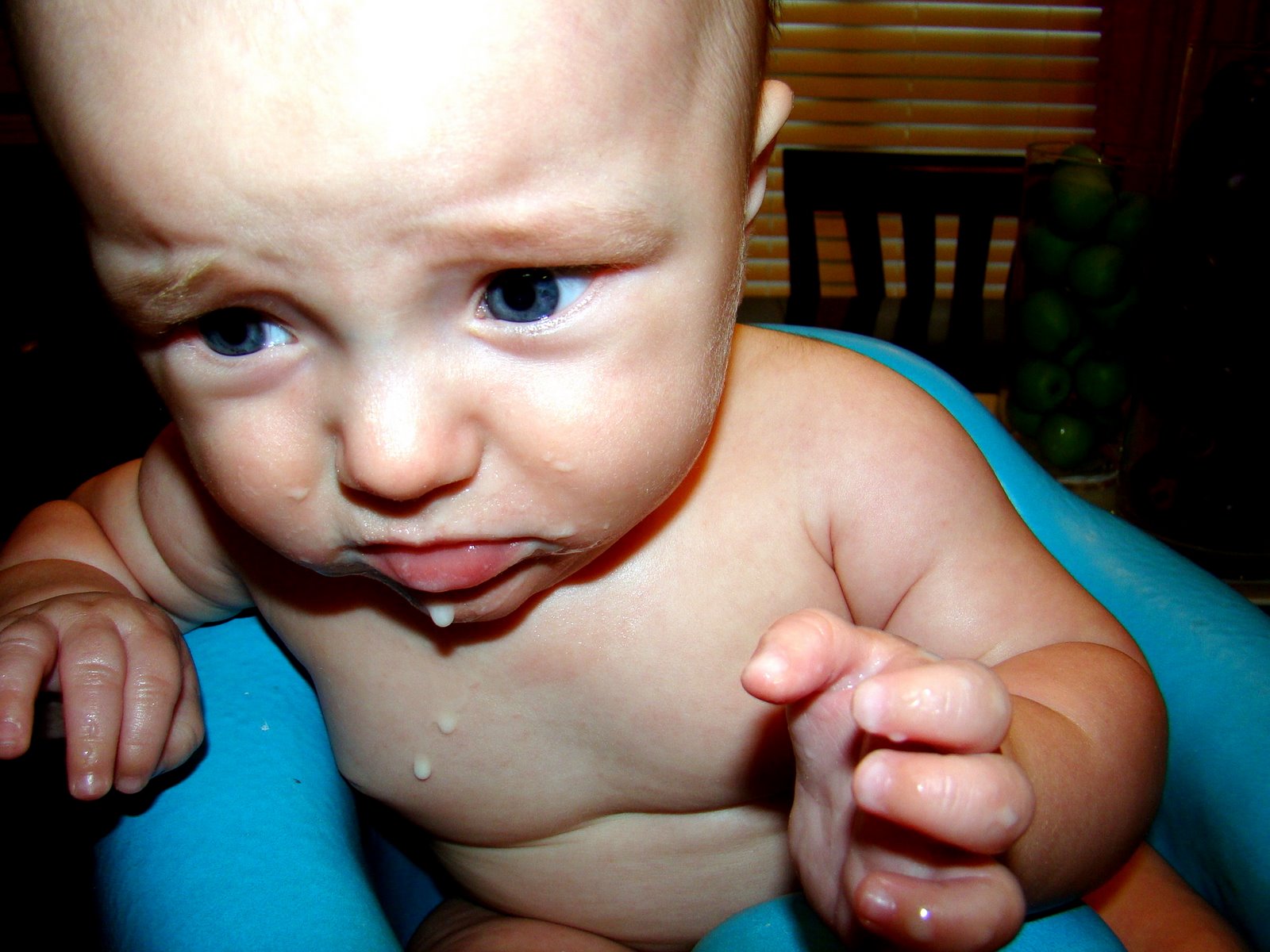 The one thing no book mentioned (and no one told me either) is how to do you tell when they are done eating? I had NO CLUE! So since I’ve started this whole adventure I just feed him until he gets fussy. Is that a good way to tell? But like this morning he was fussy the whole time so I didn’t know when to stop! With the breast he’ll turn his head and simply won’t open his mouth if it’s offered again but I don’t know what signs to look for with the spoon! 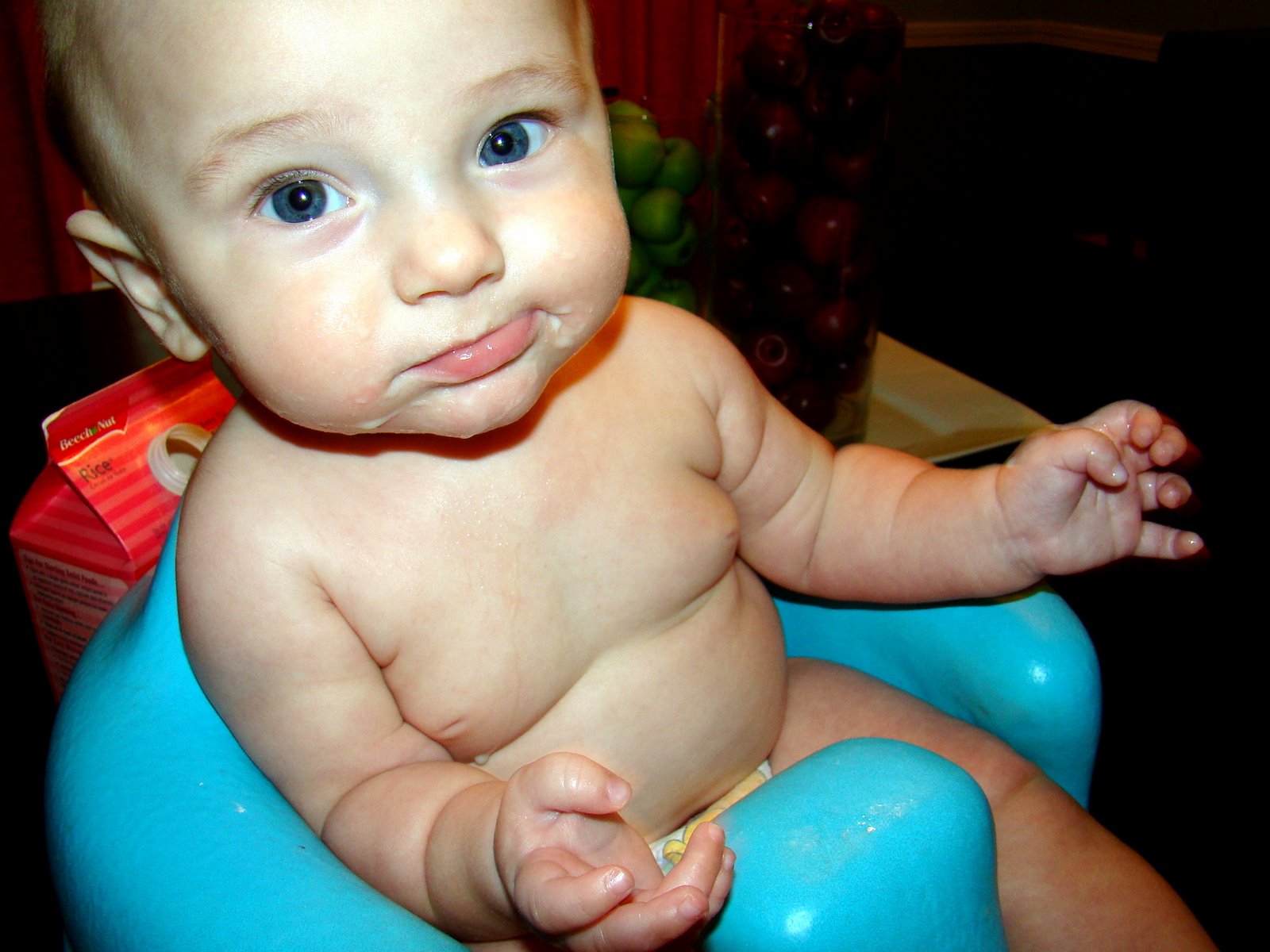 Saturday we tried mixing the cereal with water and he didn’t have an awesome response so I tried breast milk again. He just isn’t overly happy while eating…but why would he be? I think that’s pretty normal…it’s SO much new stuff for him to take in that he has a lot to concentrate on and those are the kinds of faces he makes while eating. Not happy, not upset, just very focused. 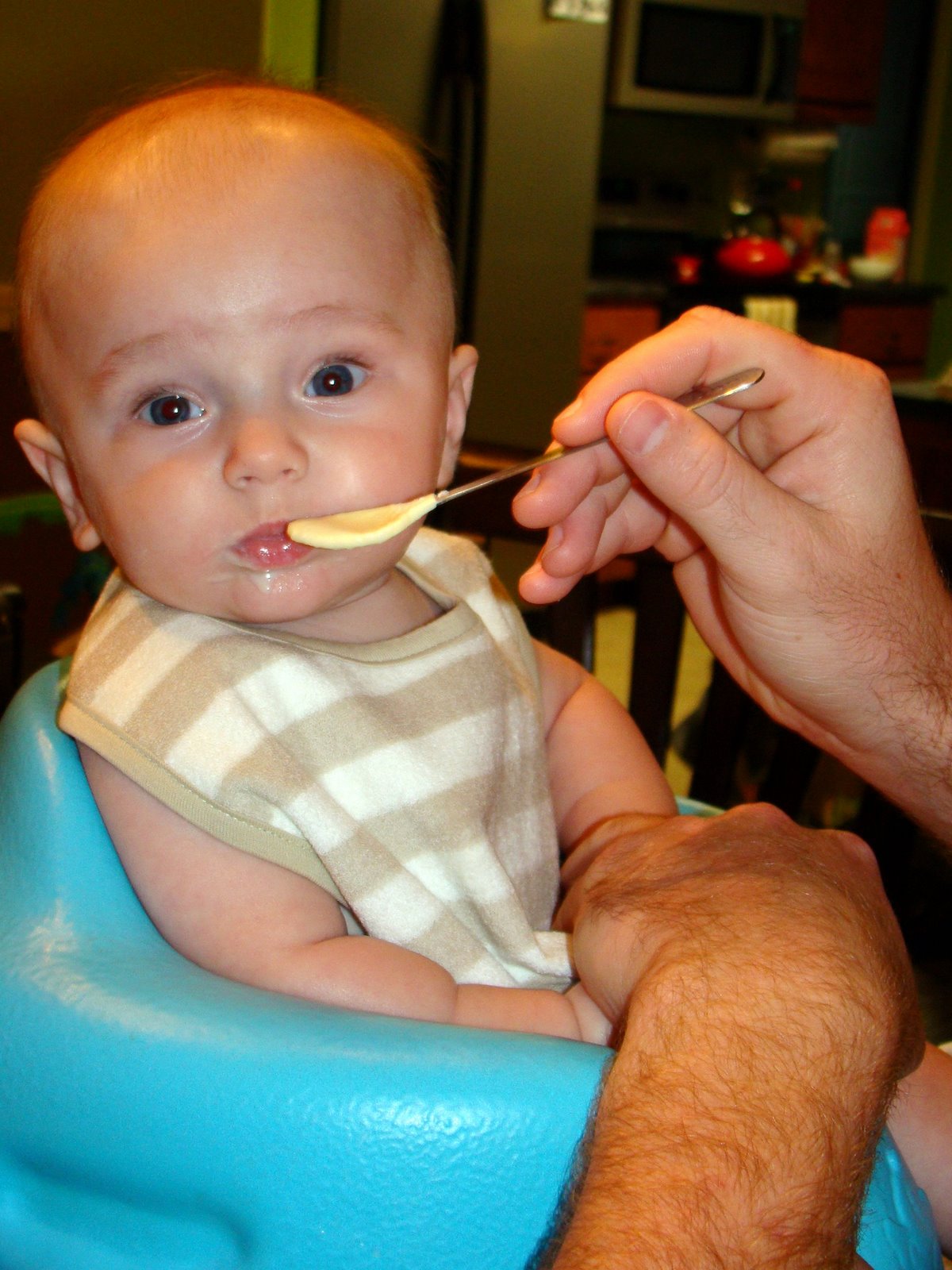 Today was day 3 and we did it with water and I heated it up a little bit. Didn’t seem to make it any “better” to him and today he fussed the whole time. Of course I had an “oops” moment..I used TAP water and you’re supposed to get some special Nursery bottled water for babies because our tap water has bad stuff in it I guess? Luckily Mrs. Charlotte had some when we were at her house and she gave me some to use until I can get to the store.

Daddy’s first time feeding him! I love how we both open OUR mouths when we go to feed him..I think we think if we open wide then he will too 🙂 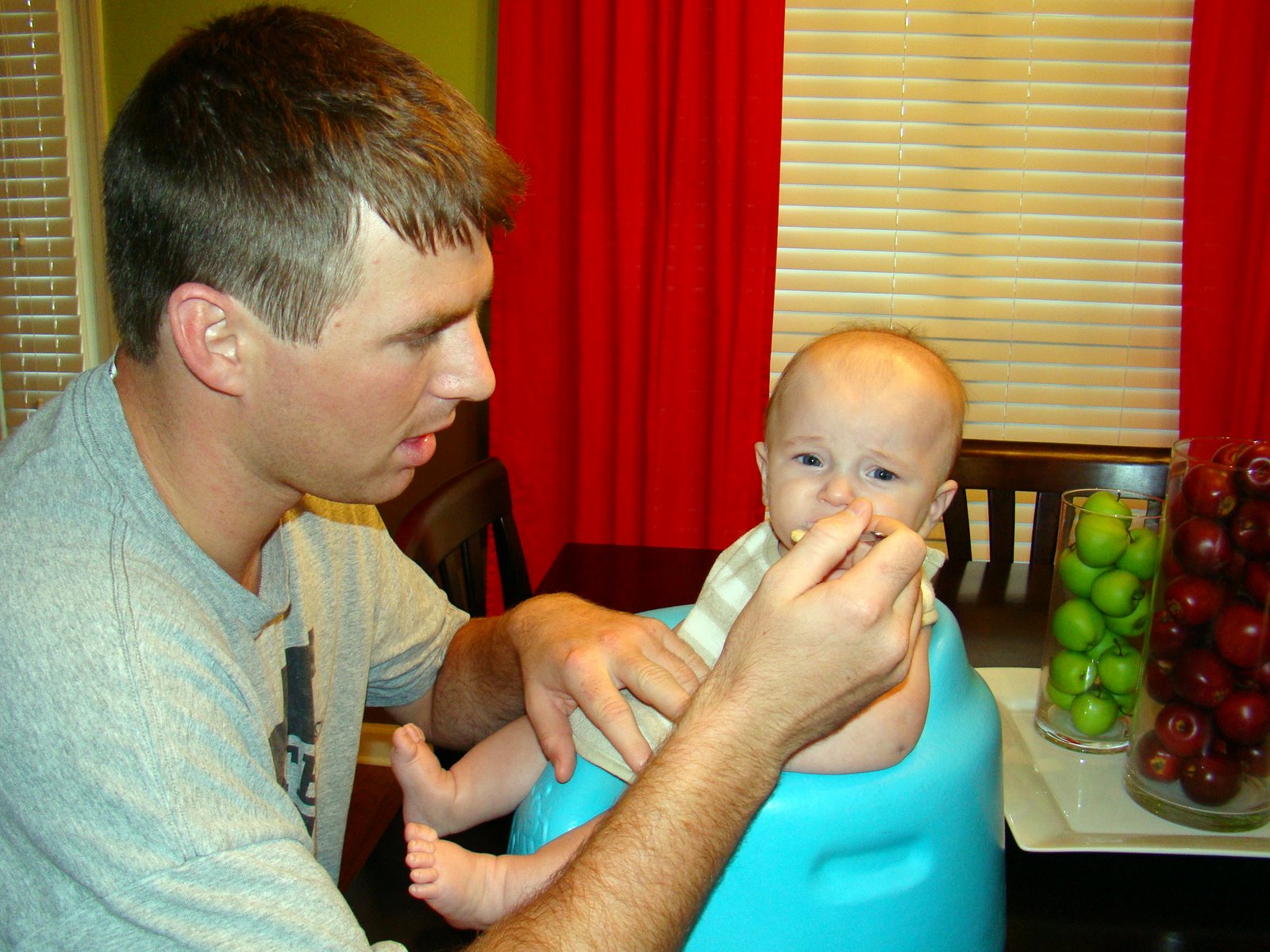 I know, I know. I feel like I’ve been throwing the kid through a bunch of loops because I keep changing things up on him with this cereal! I’ve decided to for sure use the Nursery water to mix it with and will probably not heat it up as I heard the cold will actually feel good to his teething gums. My plan is to stick with rice cereal just in the morning time then do it all three meal times sometime next week. After 2 weeks of that I’ll go for the REAL DEAL…probably carrots?

While it’s a lot to figure out and a lot of trial and error it is exciting too because it makes me feel MORE like a Mommy! Sitting around playing with him all day is wonderful but I don’t feel like I’m really teaching him much. Now with this whole feeding thing I know he’s learning so much and I feel like I’m helping him in ways that will affect him the rest of his life (I know I’ve already been doing that but it just hasn’t FELT like I have!). Pretty fun stuff! 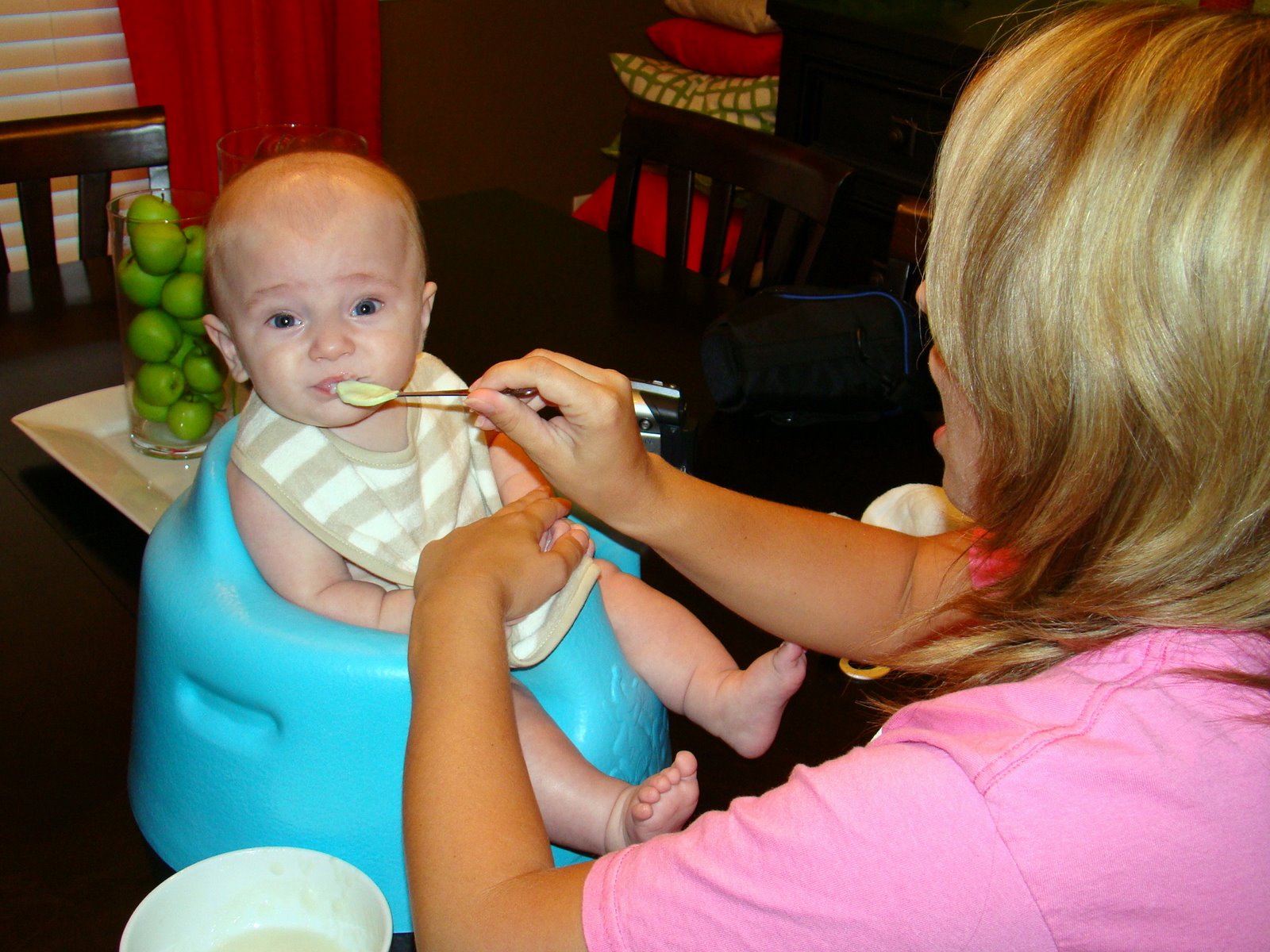 Babywise says that by 6 months we should be eating about the same times he does so we can eat as a family because it will teach him how to behave at the table and will be valuable time as a family. I think this is VERY important as I’m big on table manners and I’ve always thought it was important to have family meals. Zach and I are going to start eating breakfast a 7 (right now I do it at 9 while Kye’s napping) and I’ll try to move my lunch to 11 (so early though!) then eat dinner as a family at 7. Babywise II also talks about the importance of prayer and how you should pray with your baby before each meal. I keep forgetting to do this with him but I know it’s SUPER important and swear I’ll remember to start tomorrow 😉