I soaked Kye UP during the month of June! It was W-O-N-D-E-R-F-U-L having him home with me everyday during the summer 🙂

Eating: Kye has been eating great! He’s getting more adventurous with what he will try and his appetite has def picked up a lot! This month he started to show more preferences with how he eats. He asked to eat with a “grown up” plate (our dinner plates) and I was surprised that he didn’t mind his food touching! Also since Mother’s Day Kye LOVES to use chop sticks. I totally have it on the “Christmas gift idea” list for him for Christmas. Do they make kids plastic ones? B/c the wooden ones we got from the restaurant are a beast to clean! 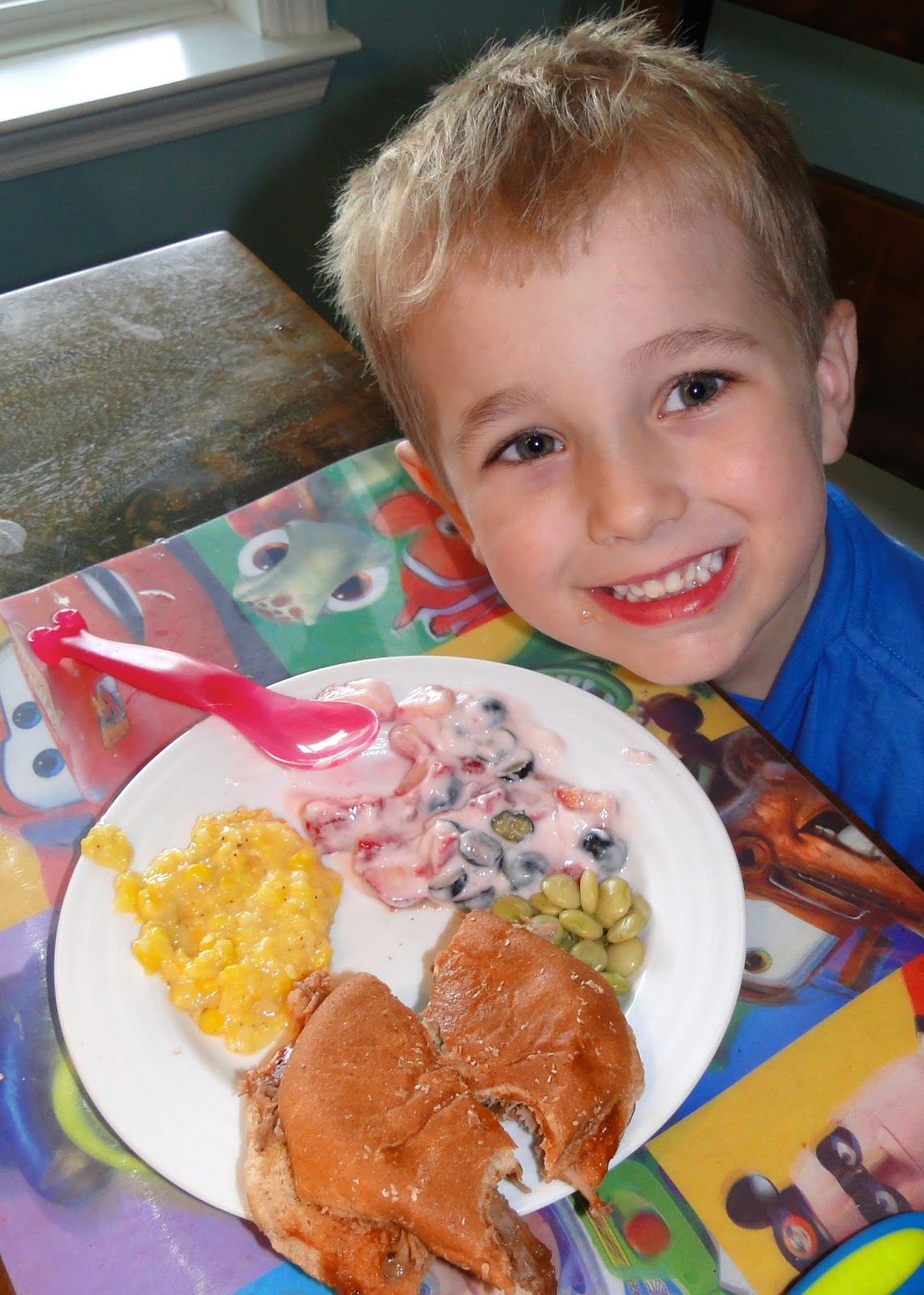 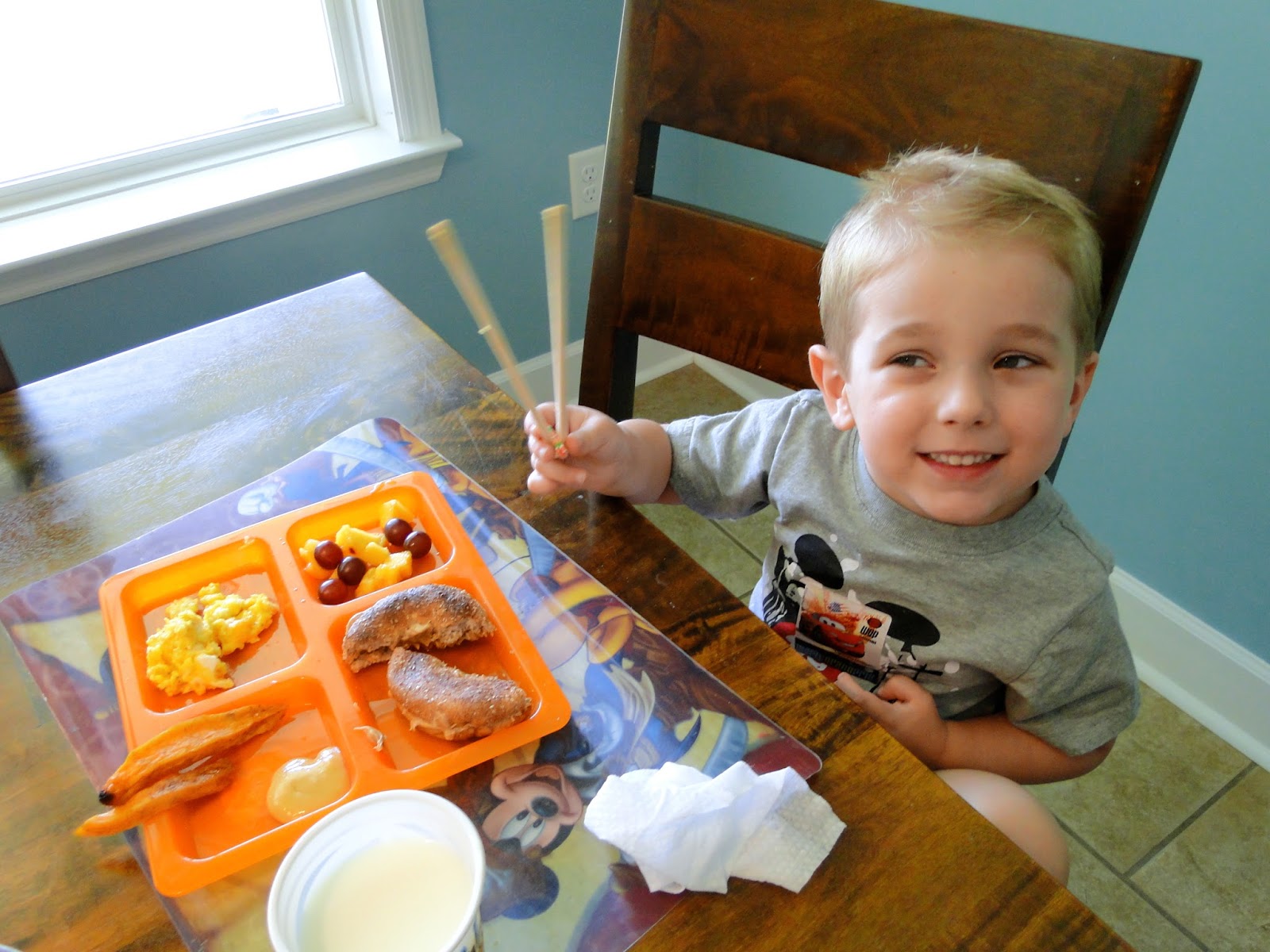 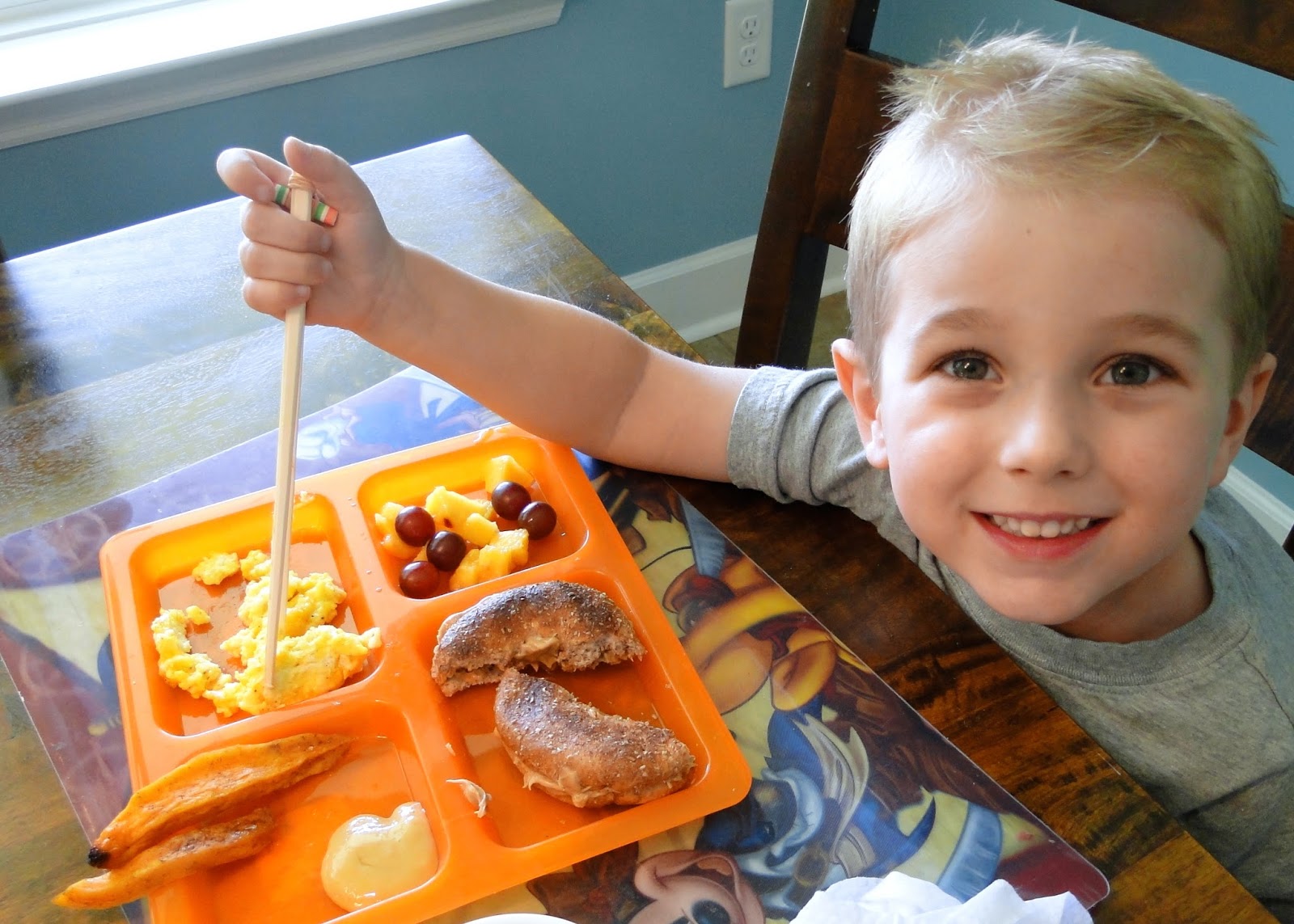 Kye asks for smoothies for breakfast all the time and I enjoyed making the kids a breakfast smoothie during our relaxing summer days!!! I mixed in some of a Meal Replacement Shake to give them that added boost along with frozen berries and even some sneaky vegetables 😉 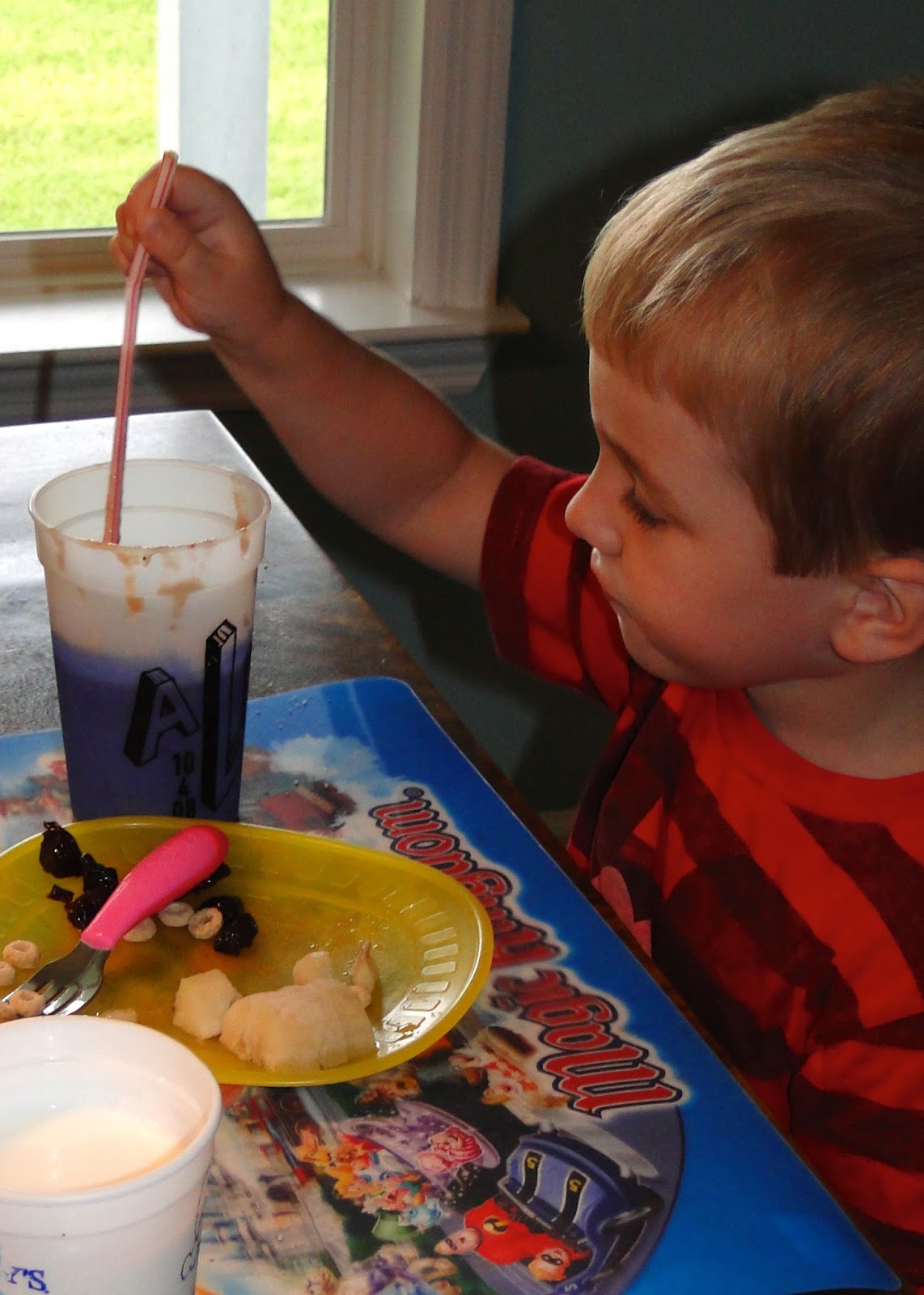 Helper: Kye truly has a servant heart. I wish I had such a natural love of helping others the way he does! He enjoys cleaning and will ask me to let him help clean the house!!! He also this month helped me frost cupcakes for the first time…he did a GREAT job. He takes a lot of pride in doing things well and I love that he is such a hard worker at anything he does! I love his help but goodness it can take a LONG time!!! Here’s a video showing how long it takes for two kids to clean up a mess 🙂 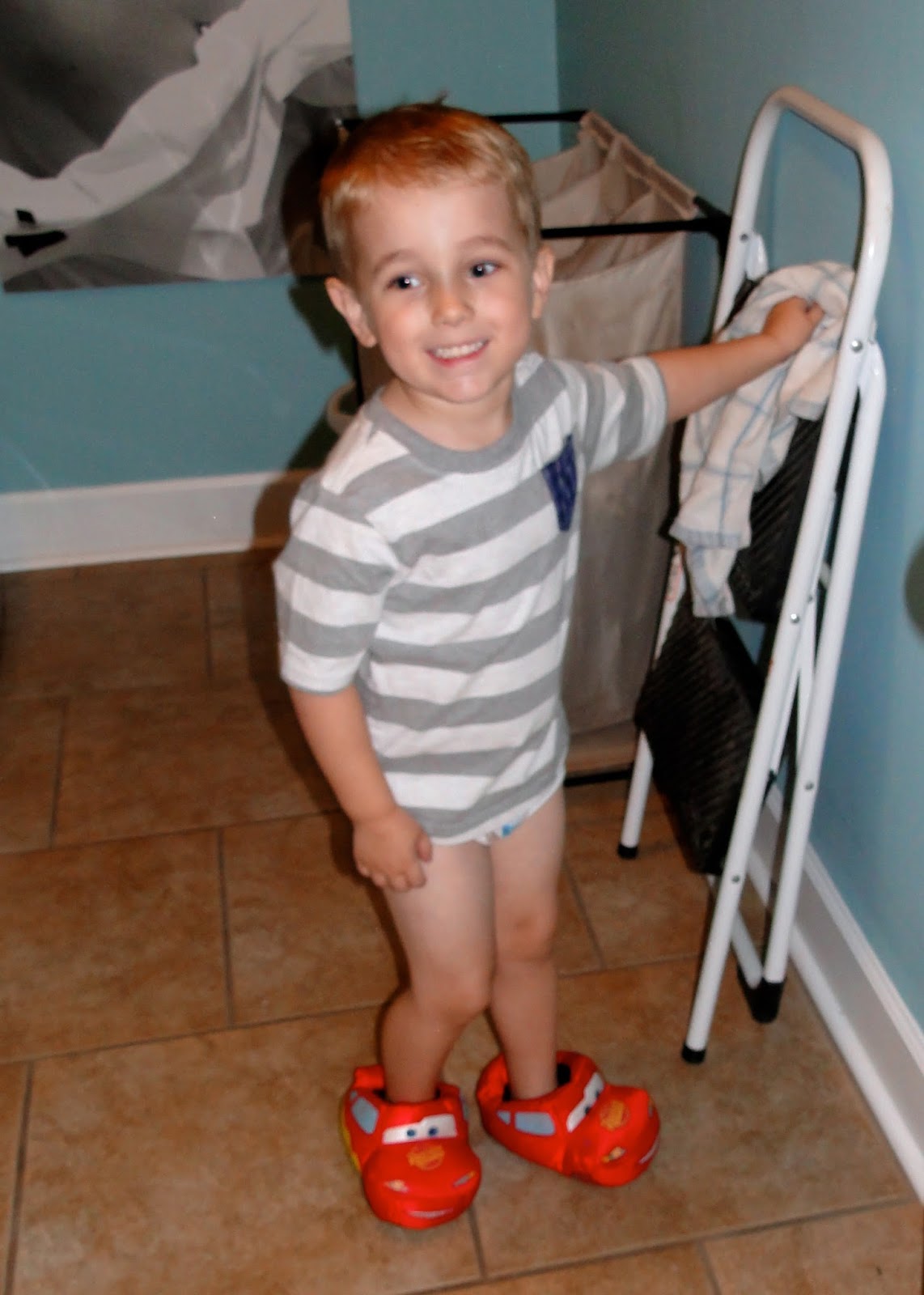 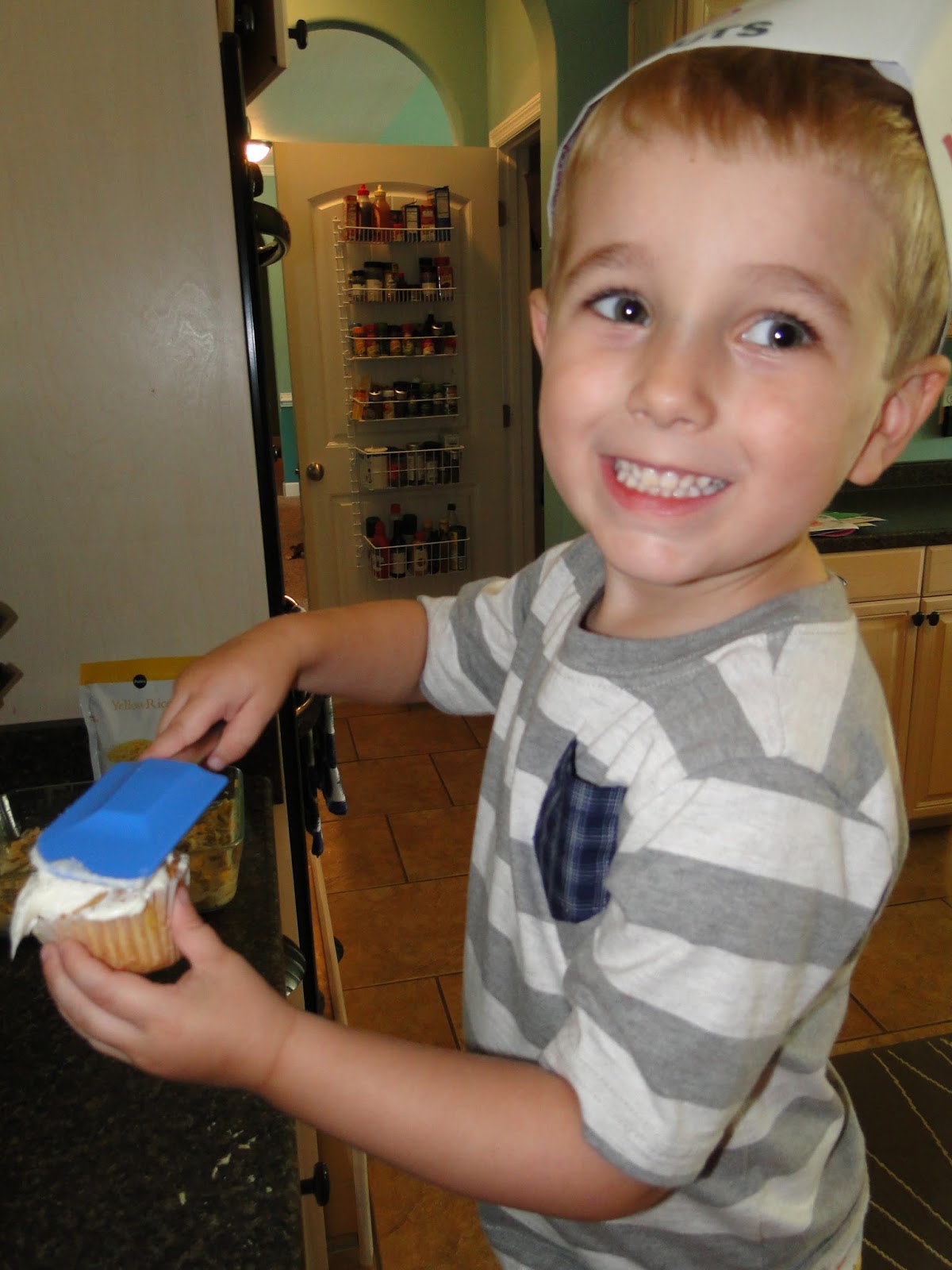 Coloring: I don’t know a lot of kids Kye’s age but check out those coloring skills! He legit always stays in the lines!!! It shocks me at his coloring abilities as I feel like he should still be scribbling all over the place right?!?! 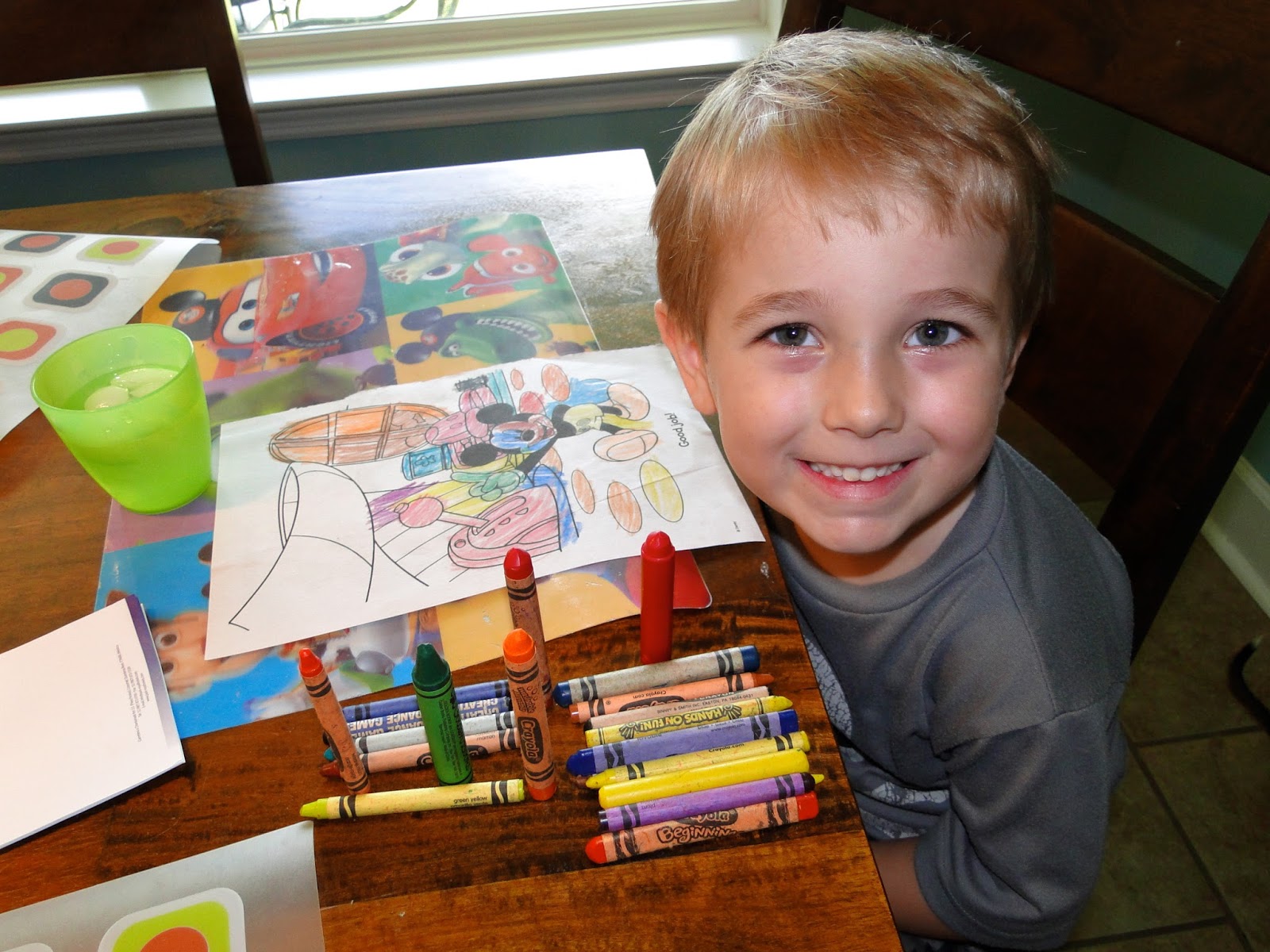 Table Time: Kye has always enjoyed sitting quietly and working on a task. His attention span has always been pretty good about stuff like that and it’s very nice that he’s old enough to get things out himself to keep himself busy! He really enjoys stickers and, of course, making play dough snakes! 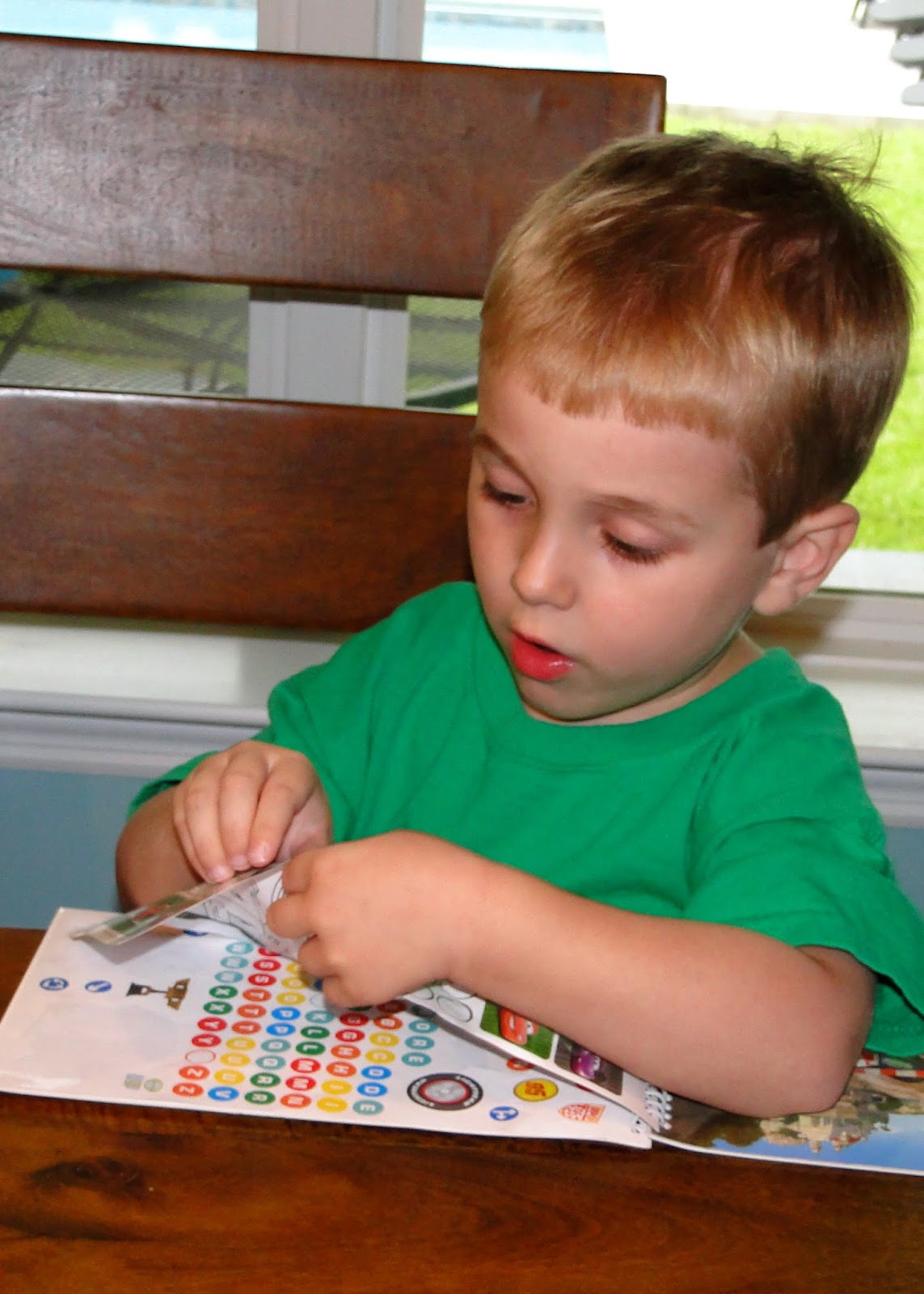 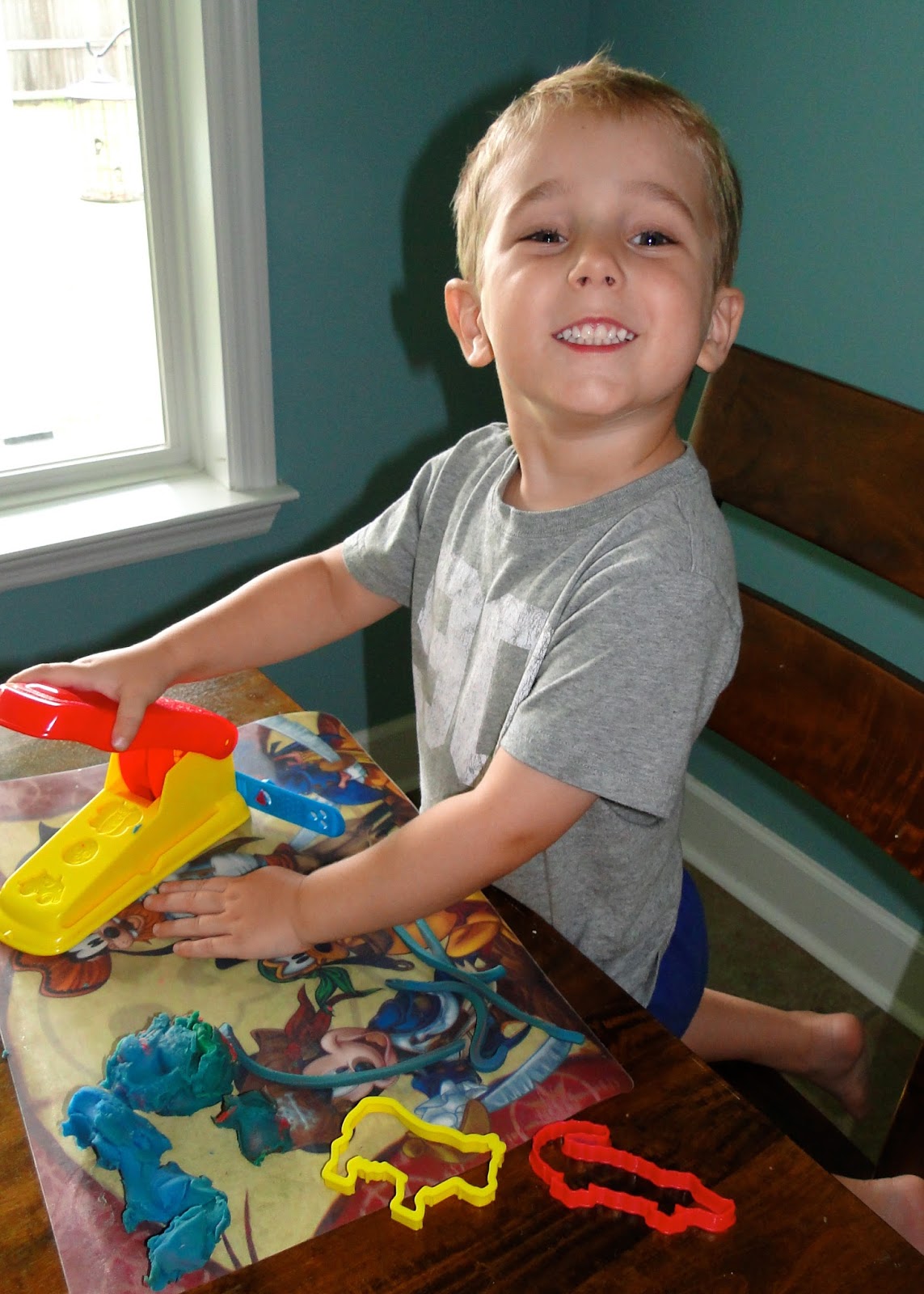 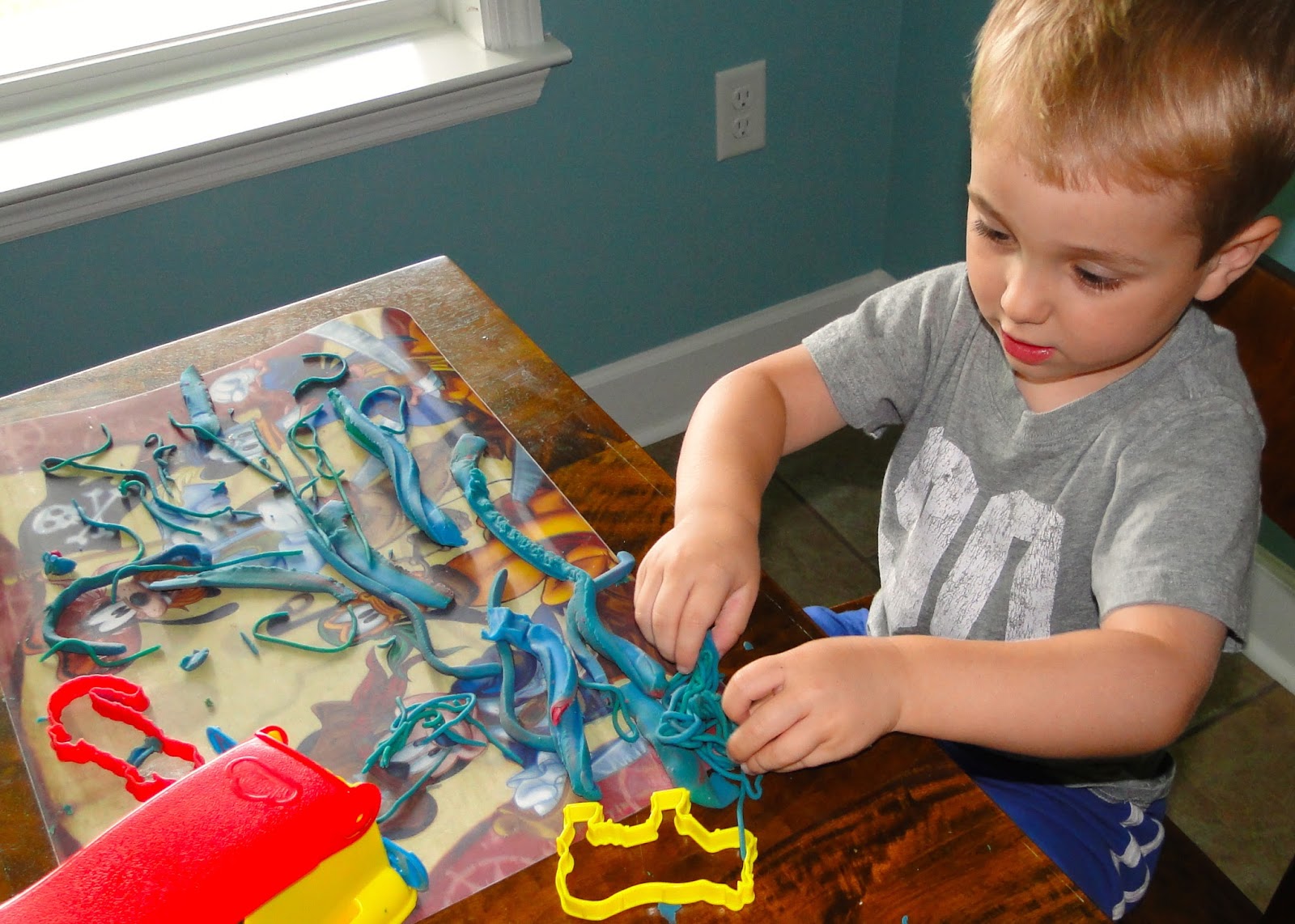 Cuddle Kid: Kye is also in a VERY loving stage. I had always heard that boys love their mamas and I def see how that’s true now. He will cuddle and hug and be sweet all day 🙂 I love it! He enjoys getting all of his “friends” out to cuddle with him during his awake times (he’s only allowed to sleep with two friends). He also enjoys picking out different friends to sit with him during movie time and is the typical guy who completely zones out whenever a movie is on. Best of luck to his future wife someday when dealing with that 😉 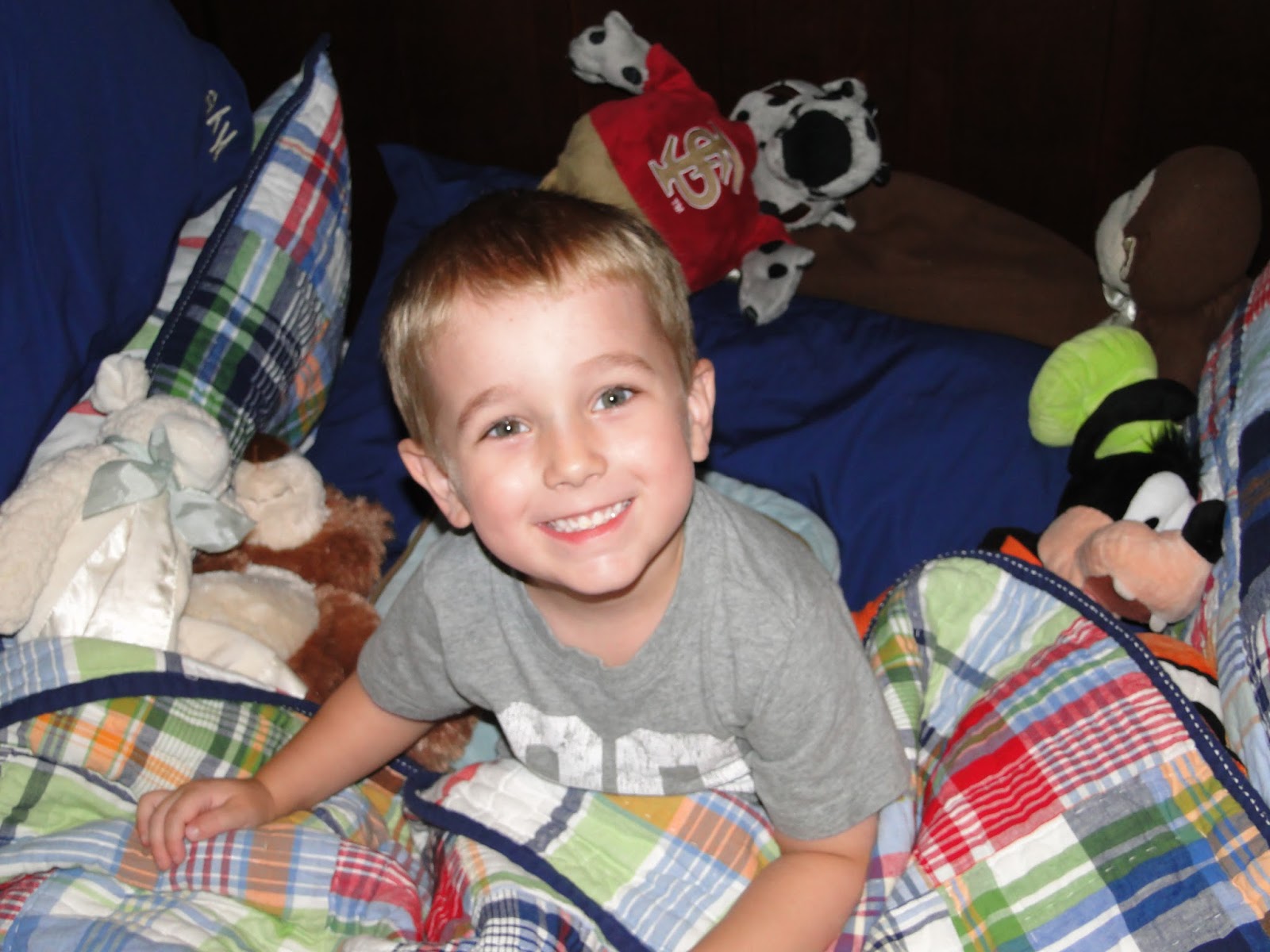 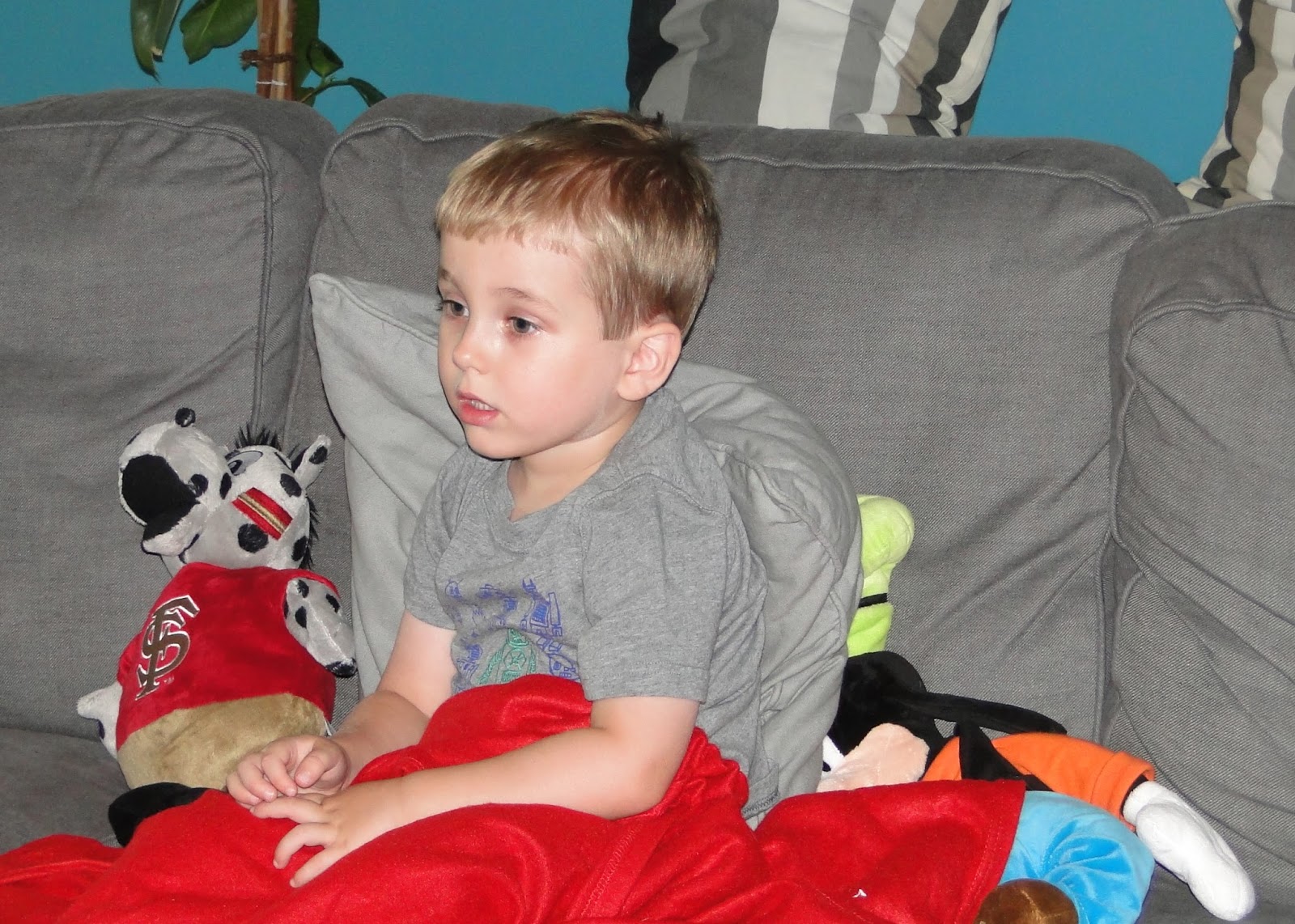 Cuddle time with Daddy watching FSU on the Ipad 🙂 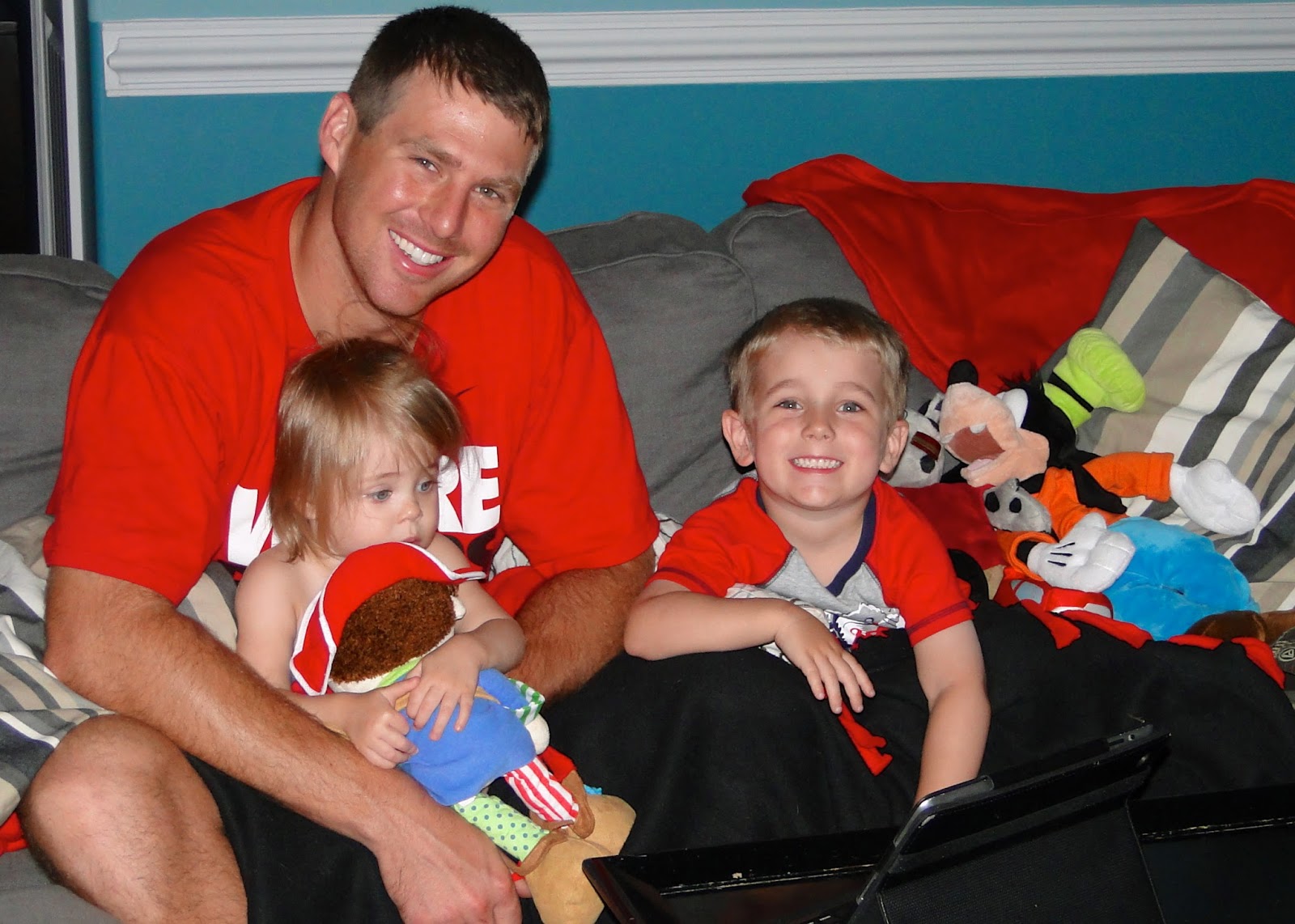 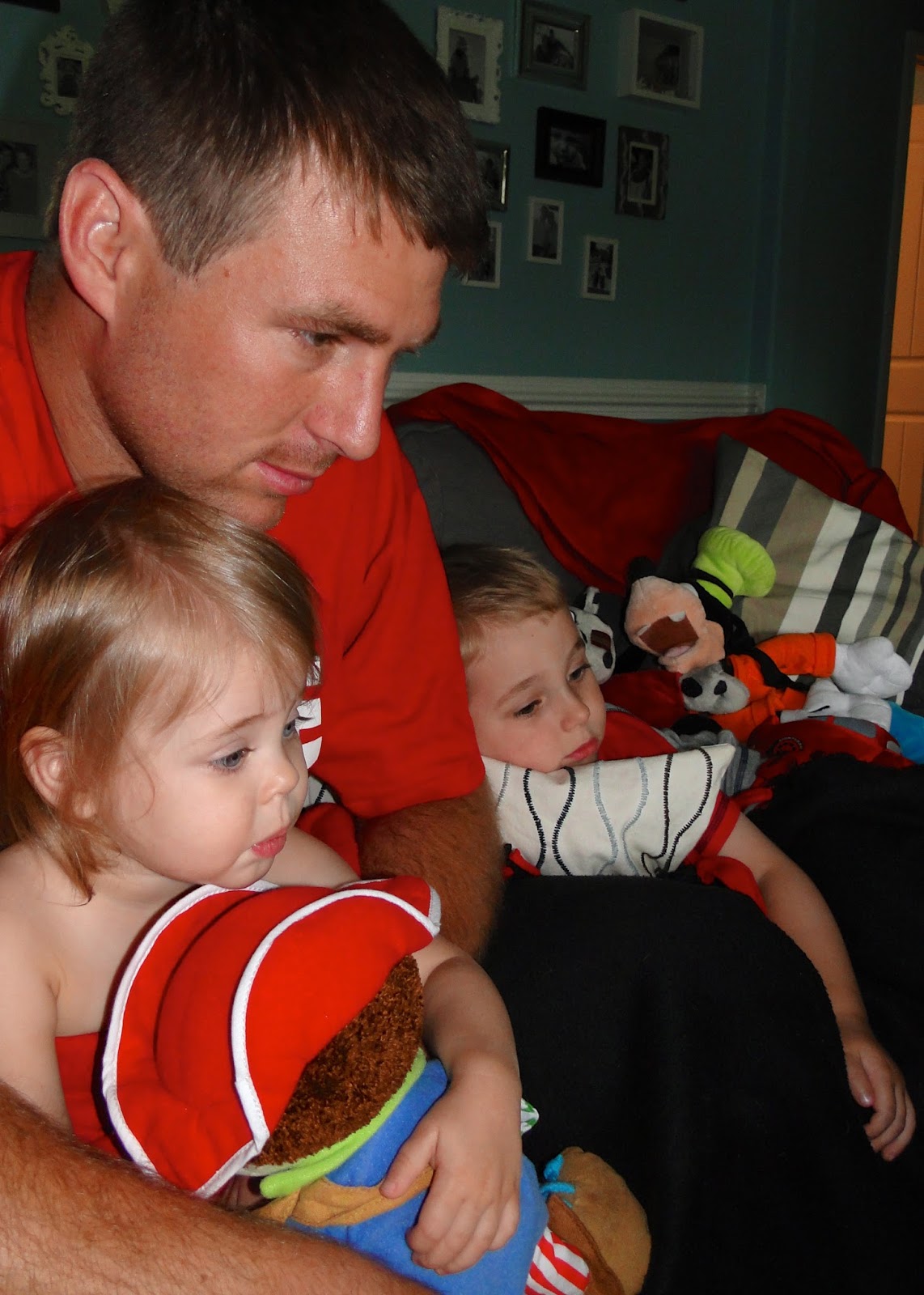 Bubbles! I try to limit the amount of bubble baths Britt gets (like they are FEW and FAR between for sure) as it’s not good for girls to sit in bubble baths. I feel bad for Kye though b/c that means that he also very rarely gets to enjoy bubbles since they bathe together! Whenever things work out where they do end up bathing separately, I like to let Kye have some bubble fun!!! On this particular day he thought it was hilarious to eat them?!?!? 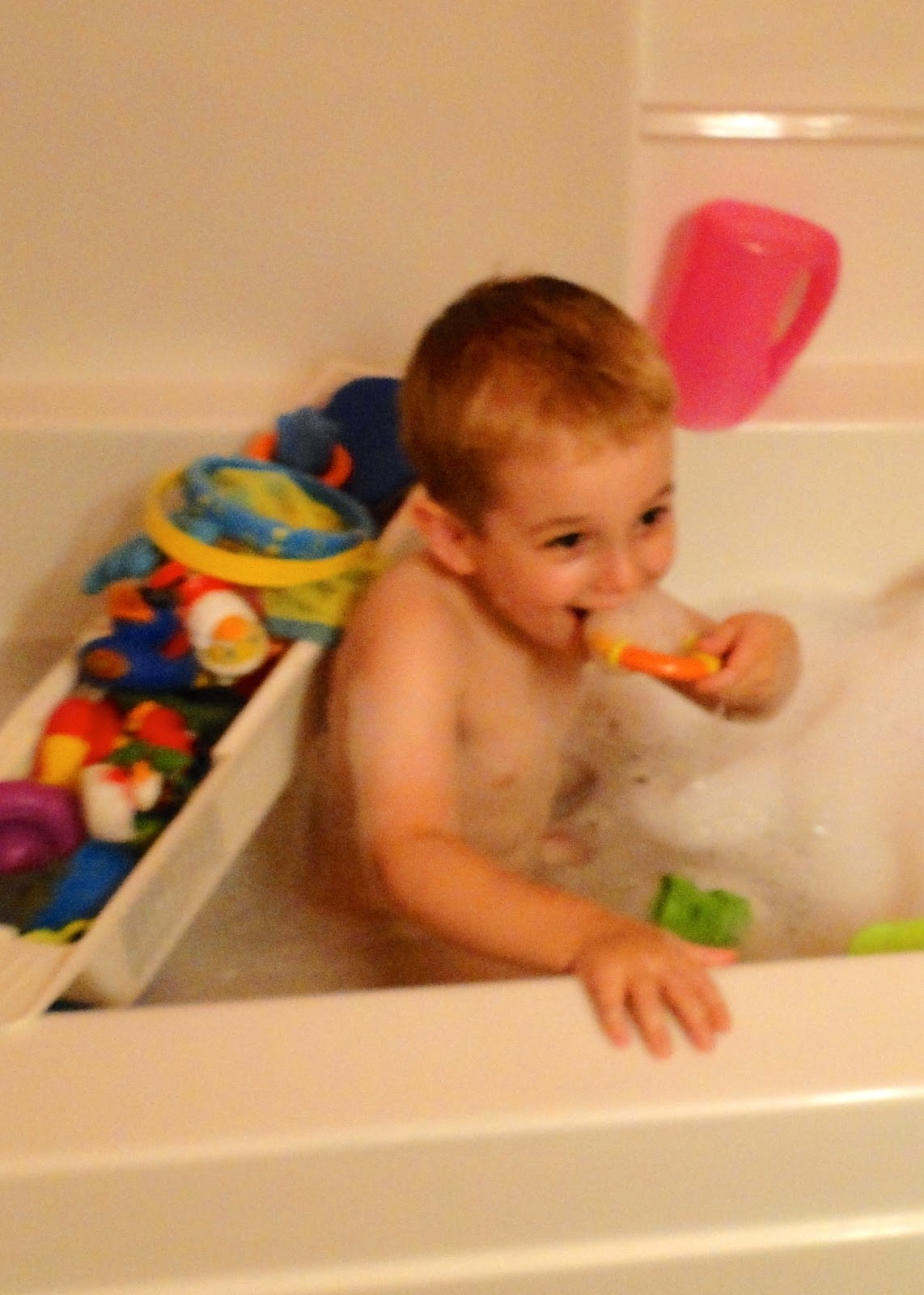 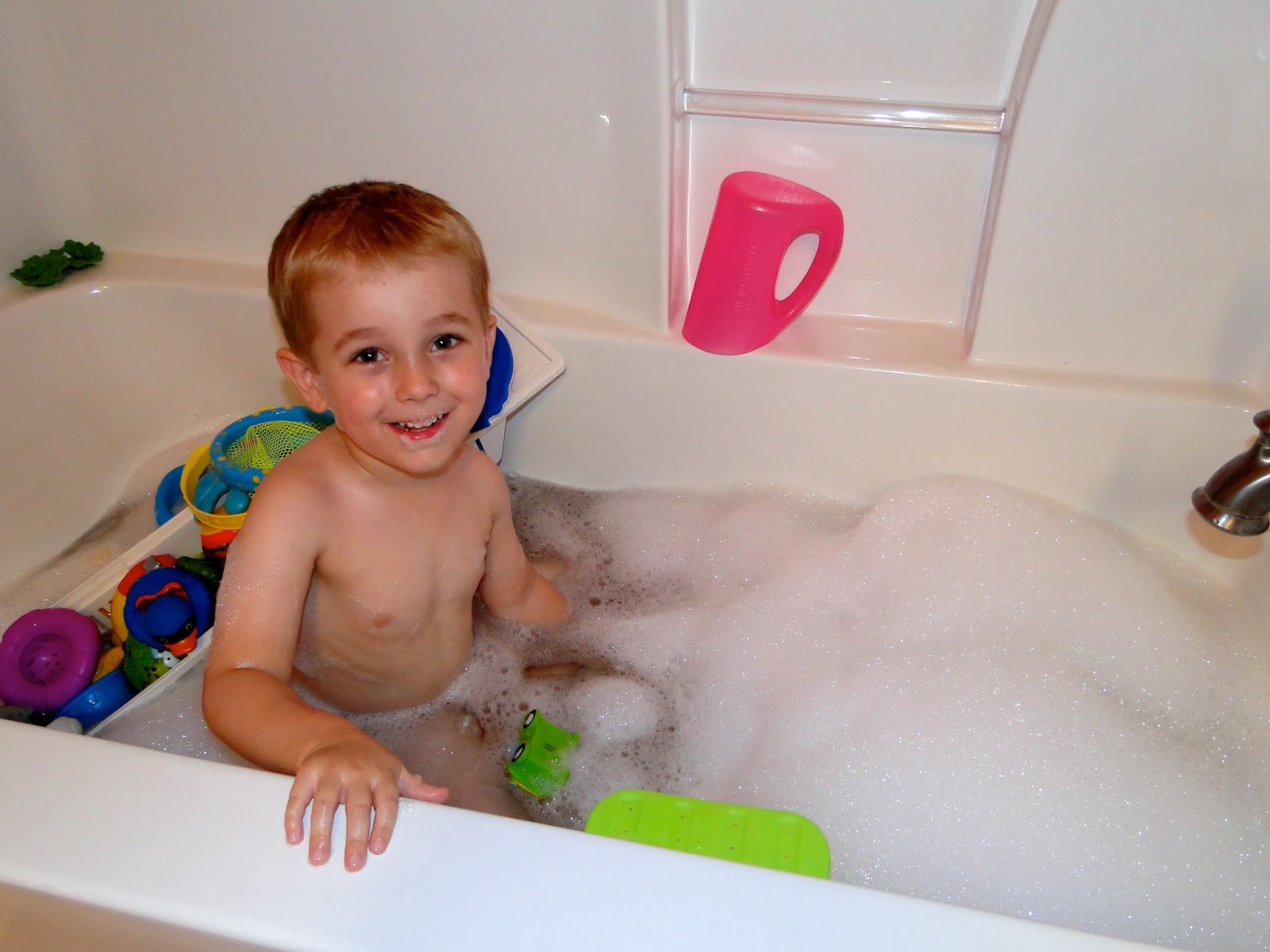 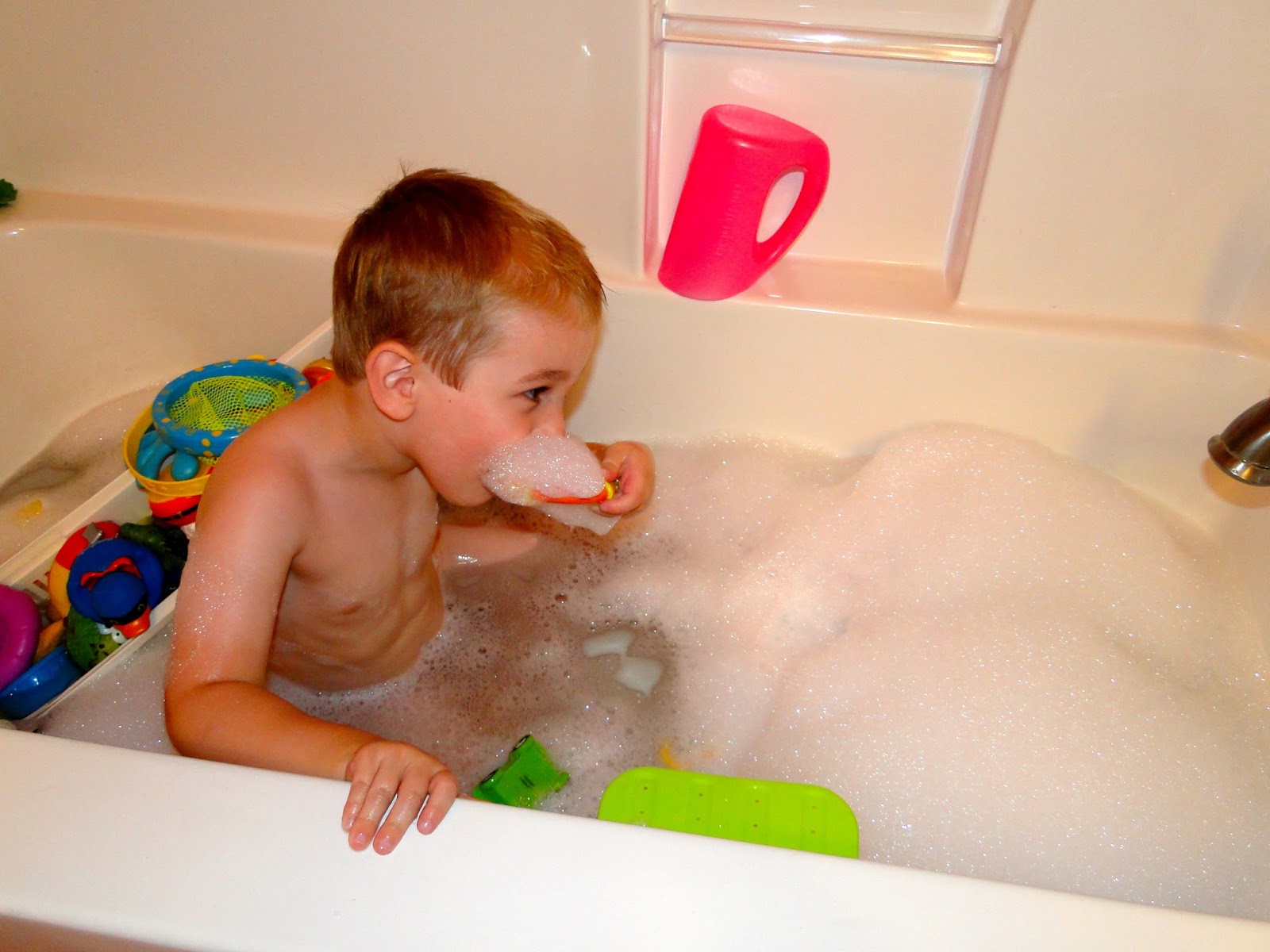 Like Daddy: Kye asked if he could have a toothpick like Daddy so I let him. It was SUCH a reminder to us that he literally is watching EVERYTHING we do and whatever we do, he will want to copy us! Not that using a toothpick is bad, but it’s such a small thing that I don’t even notice Zach does. Whenever we eat out (which is rare) Zach always grabs a toothpick and sticks it in his mouth. Kye thought he was SUCH a big boy when I let him have the toothpick. We sent Daddy this picture 🙂 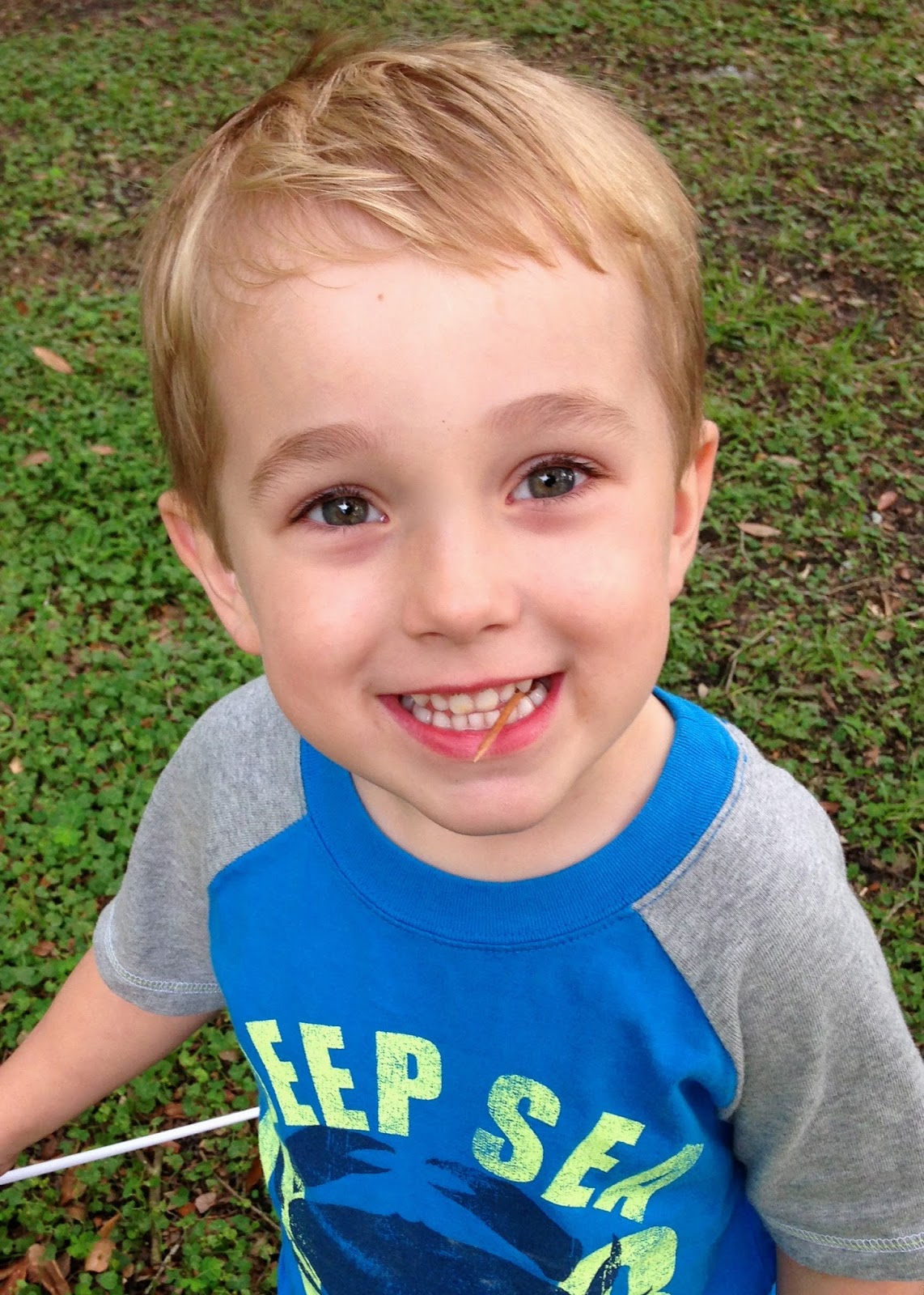 Silly: As you saw in the post with all of Kye’s school work: he’s in a silly stage for sure. He will come out of his room in all kinds of silly get ups and it cracks me up! I know soon he will be “too cool” for dress up and playing silly games so I soak it up as much as I can 🙂 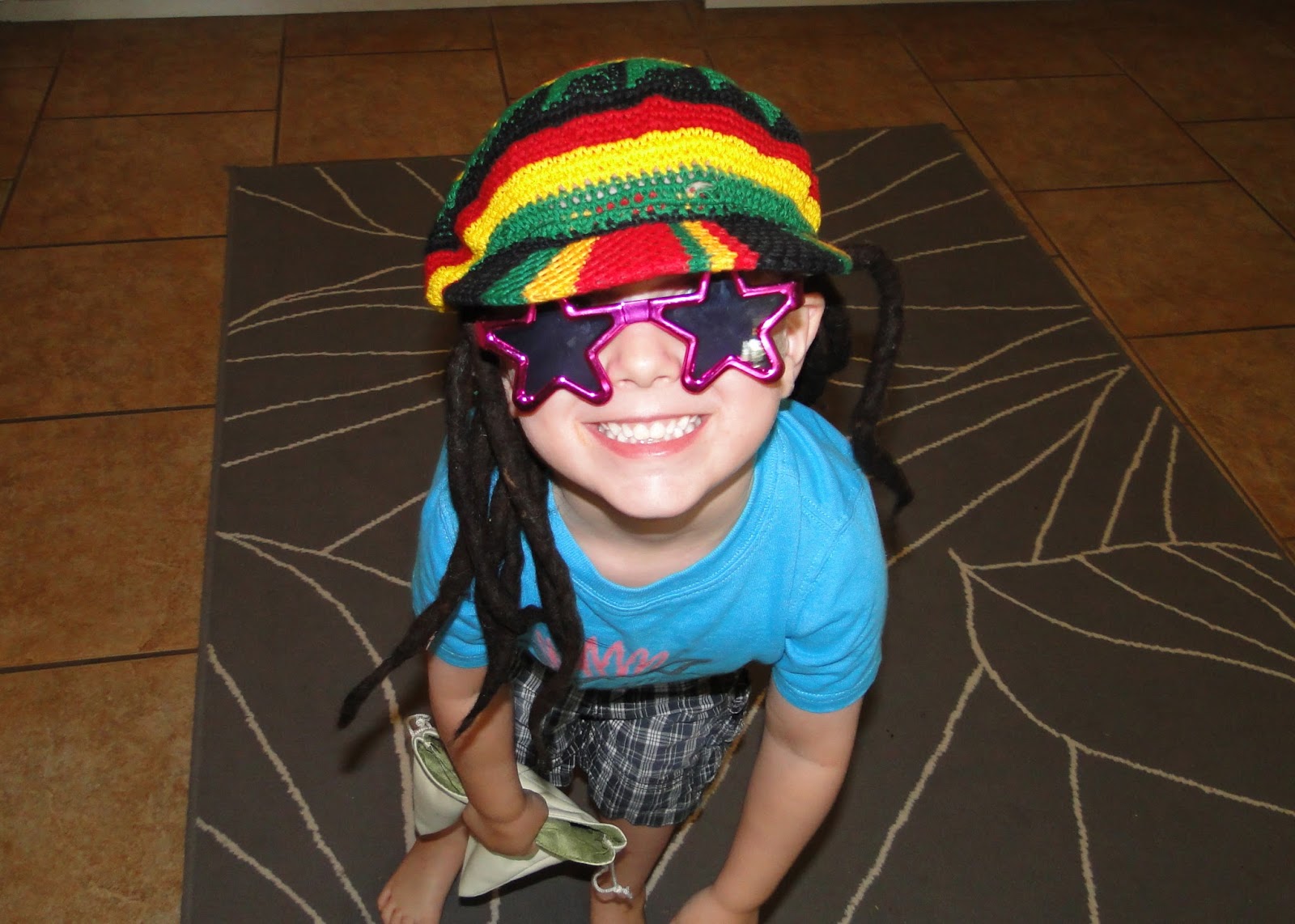 G-Mama Time: There’s been some tougher stuff going on in our lives for awhile and I’m VERY appreciative to Mrs. Charlotte. She has stepped up her game big time…not just with showing me support but especially in her role as “G-Mama.” This month she started to take Kye on little dates just the two of them. I think it’s so important for him to get that one on one special time with her and he had a BLAST. She sent me this picture of him at his favorite place (CFA, DUH!) chowing down on dessert 🙂 You know she spoils him on those dates for sure! 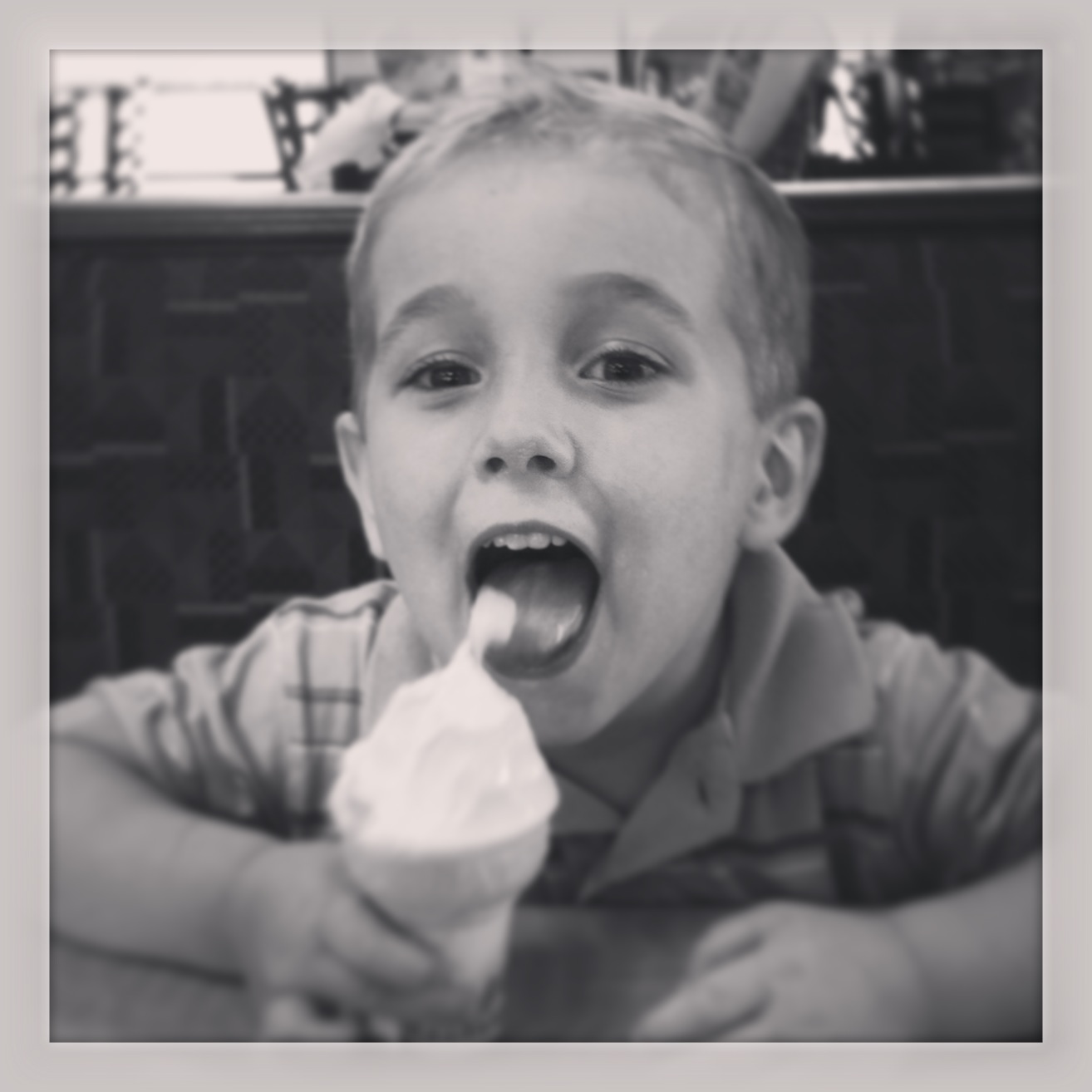 Cooper’s Party: Robyn’s son, Cooper, turned one this month and had an ADORABLE Crab themed party! We decided Zach would stay home with Britt and I would just take Kye. It was a pool party and it was GREAT that Kye could just do his own thing and I could visit with other parents and such without having to be in the pool. Pool parties totally make me nervous though! I have known people who threw pool parties and had kids drown so I’m always super cautious to keep my eyes on my kids at all times. So thankful for Kye’s survival swim skills for sure! We had THE best time together and Kye has STILL been talking about the party. I’m pretty sure we were the last guests to leave haha 😉 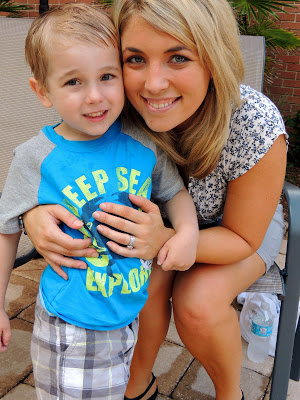 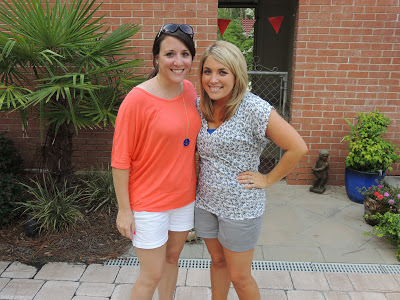 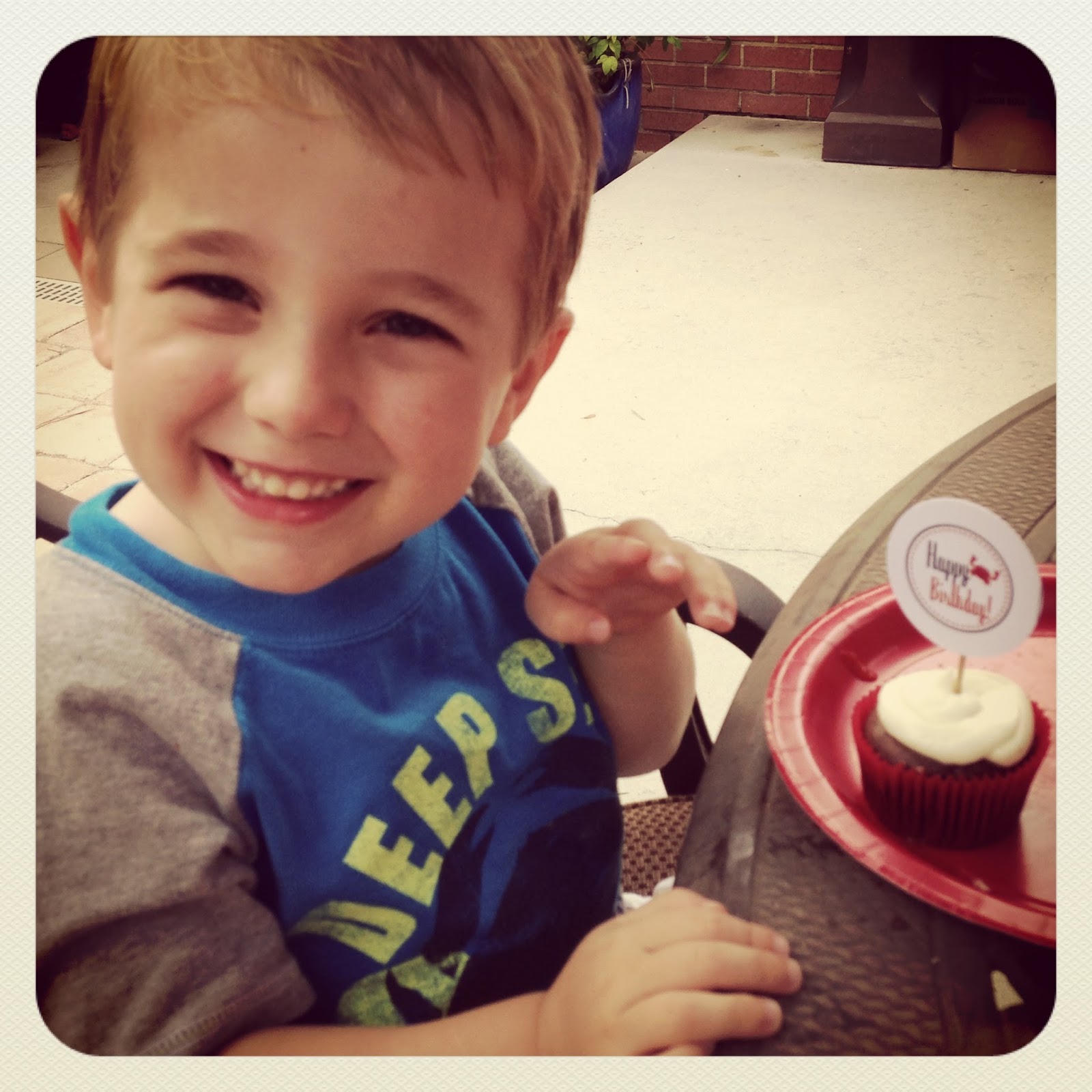 Other Stuff Going on with Kye this Month:

I’m SO proud to be Kye’s mama and enjoyed every second of our summer fun together!!! I hope I’m never one of those moms that countdown for school to start…I truly miss him everyday when he’s gone and dread when the day comes that he’s in all day school. I love this picture of him! He came out wearing this jersey SO PUMPED that it had Daddy’s number on it 😉 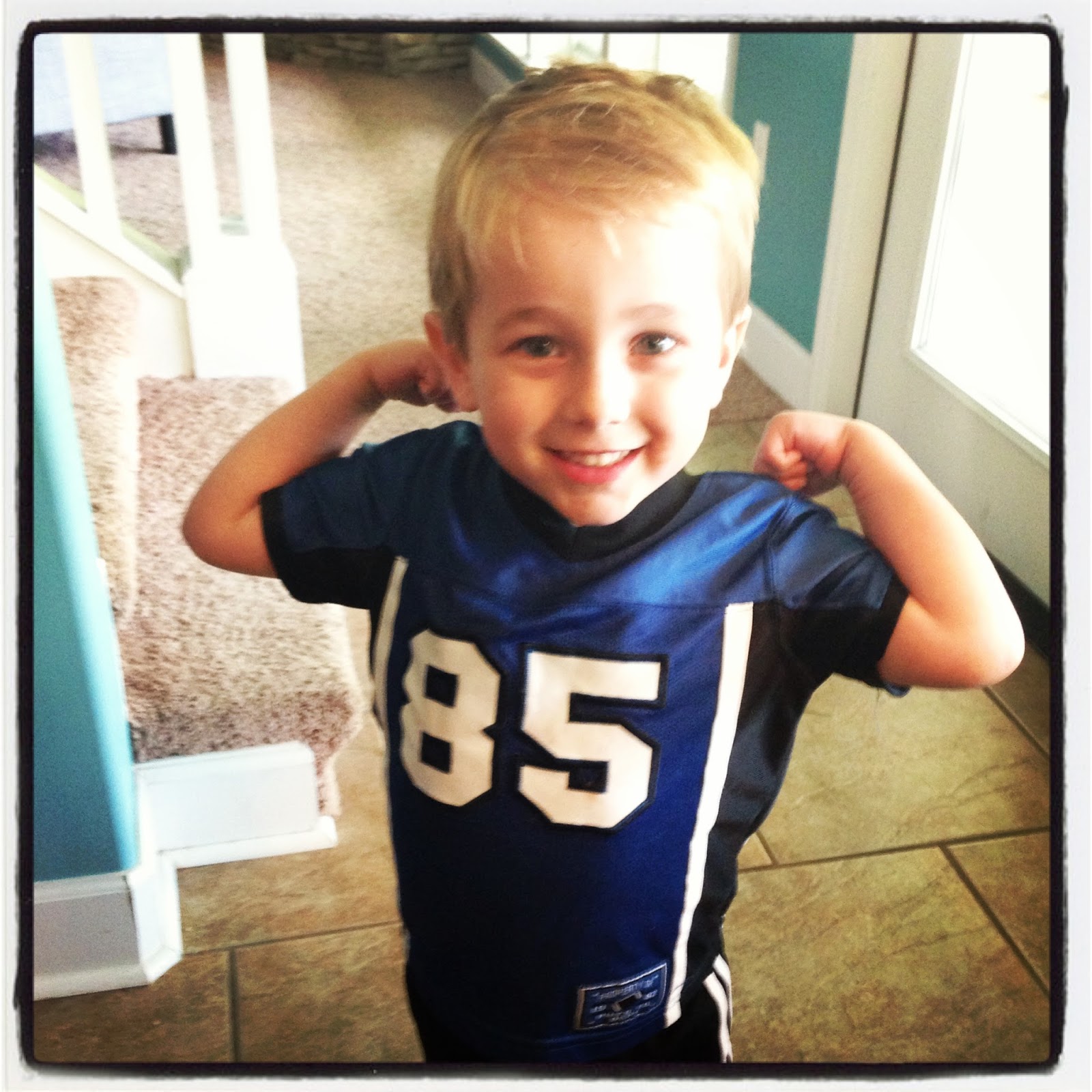