Here is everything Kye was up to during the month of August! Now that he’s in school each day I have less time with him and therefore less pictures too 🙁 Part of growing up I guess huh?

Dentist: I scheduled Kye’s dentist appointment long before I knew when the first day of school would be and his cleaning ended up being the same day as the second day of school! Luckily they get us in and out super fast so he wasn’t too late. He, again, was a wonderful patient and it was good for Britt to have a positive experience there as well. I don’t plan to get her teeth cleaned until she’s closer to 3 (like we did with Kye) but since she’s already had experiences at the dentist that weren’t very positive, I plan to take her to all of Kye’s appointments in hopes that seeing him do so well will help her get over her issues!

Kye has a little discoloration on his front two teeth and they said it’s probably plaque buildup from him sleeping with his mouth open. They scraped it off really good for us! They also did x-rays and said his “big teeth” all look great. He may have a slight overbite possibly in the future but it’s likely he may not need braces 🙂 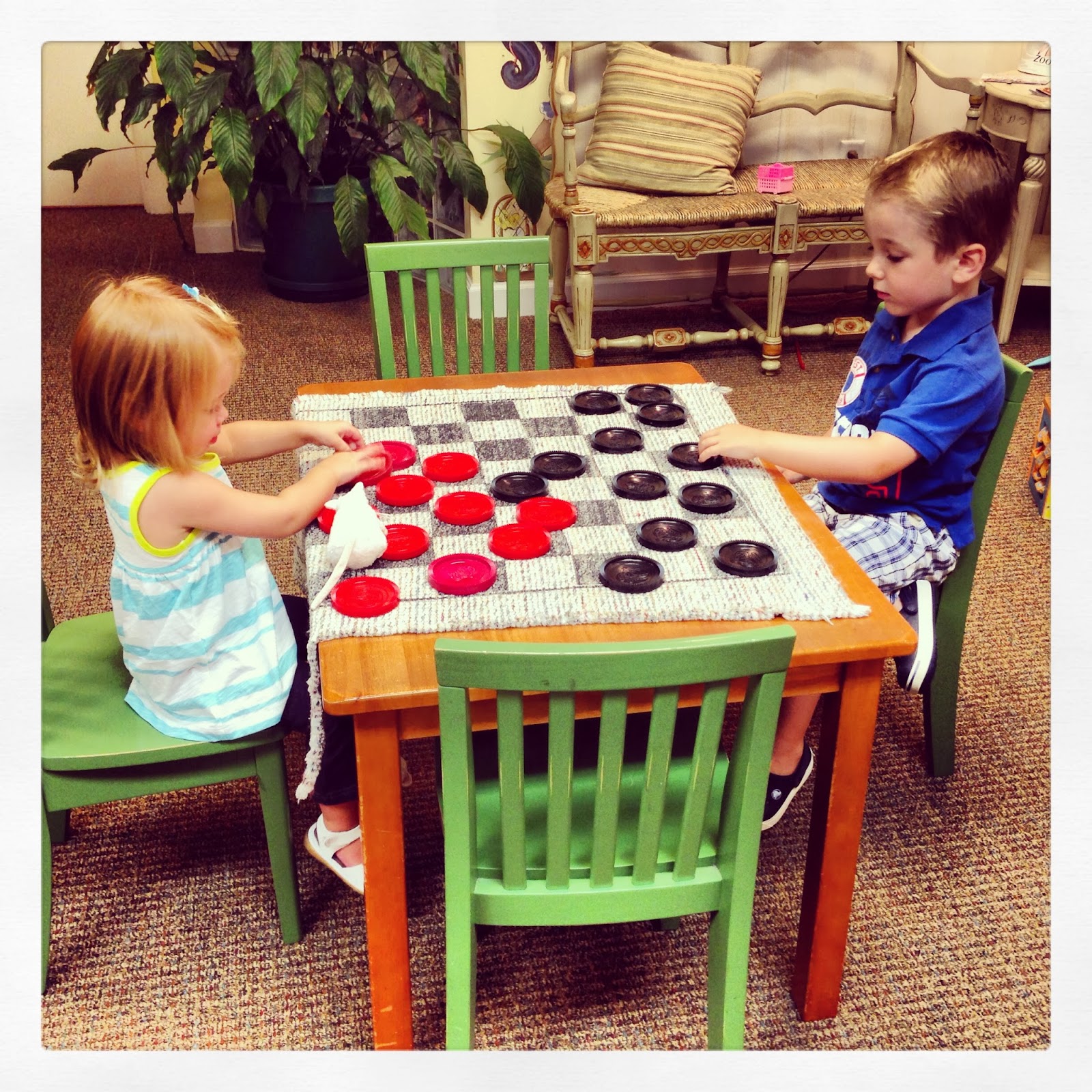 Balance Boy: This child LOVES to balance things on his head! He walked around the whole house with these army men on his head and they never fell off. I mean it’s good to know he has a talent ready if ever needed? 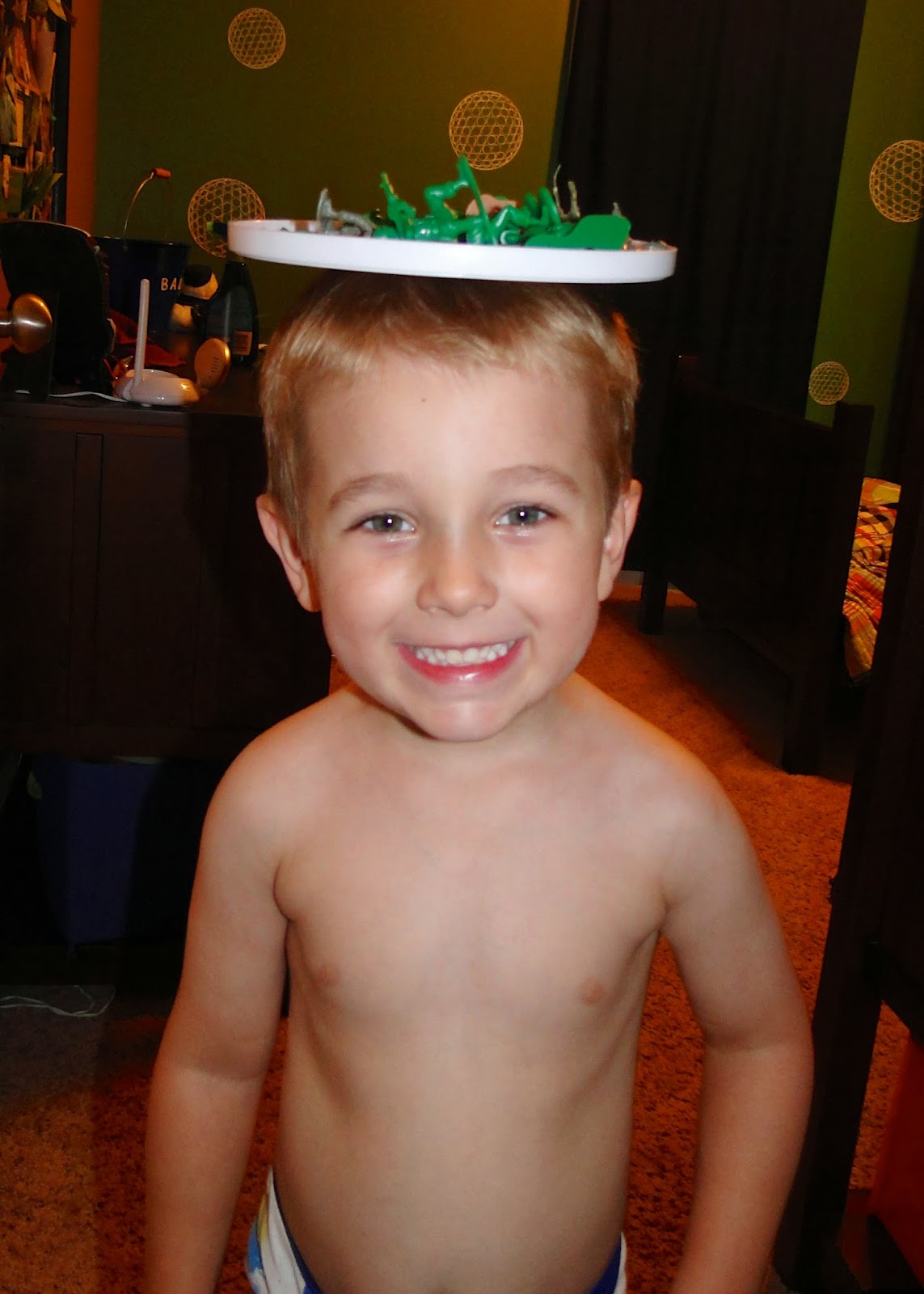 School: School is going VERY well!!! I LOVE his teacher this year. On the last day of the first week his teacher went on and on about how sweet he is and talked to me about what a great work ethic he has. On another day she told me he always looks so handsome and that it’s so nice how hard of a worker he is and how much pride he takes in his work. It’s so nice to hear such positive feedback 🙂 Kye is doing well with the 5 days a week program but says he misses Britt and I and he does get upset that he isn’t with us when we do fun things during the morning time. He also has started having a BIG appetite when he gets home! He eats and eats and eats! 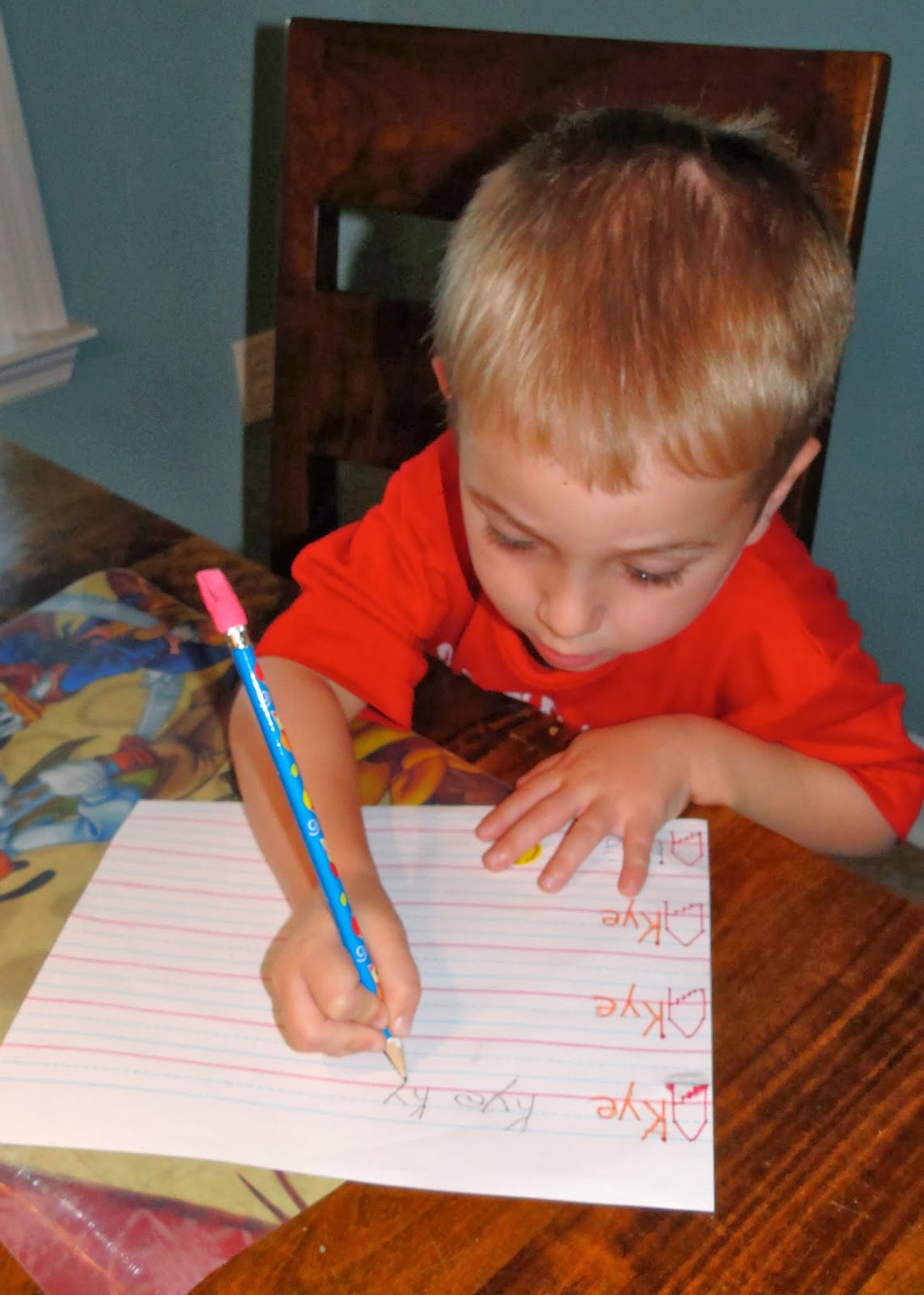 Brush Hair: I mentioned last month about Kye brushing my hair. Gah, it’s totally my favorite thing! He LOVES doing it and when Zach is home late or out of town he always runs to my bathroom and gets out all my brushes so he can fix my hair after Britt goes to bed. He’s very particular about my hair and tells me not to mess it up when he’s done with it. 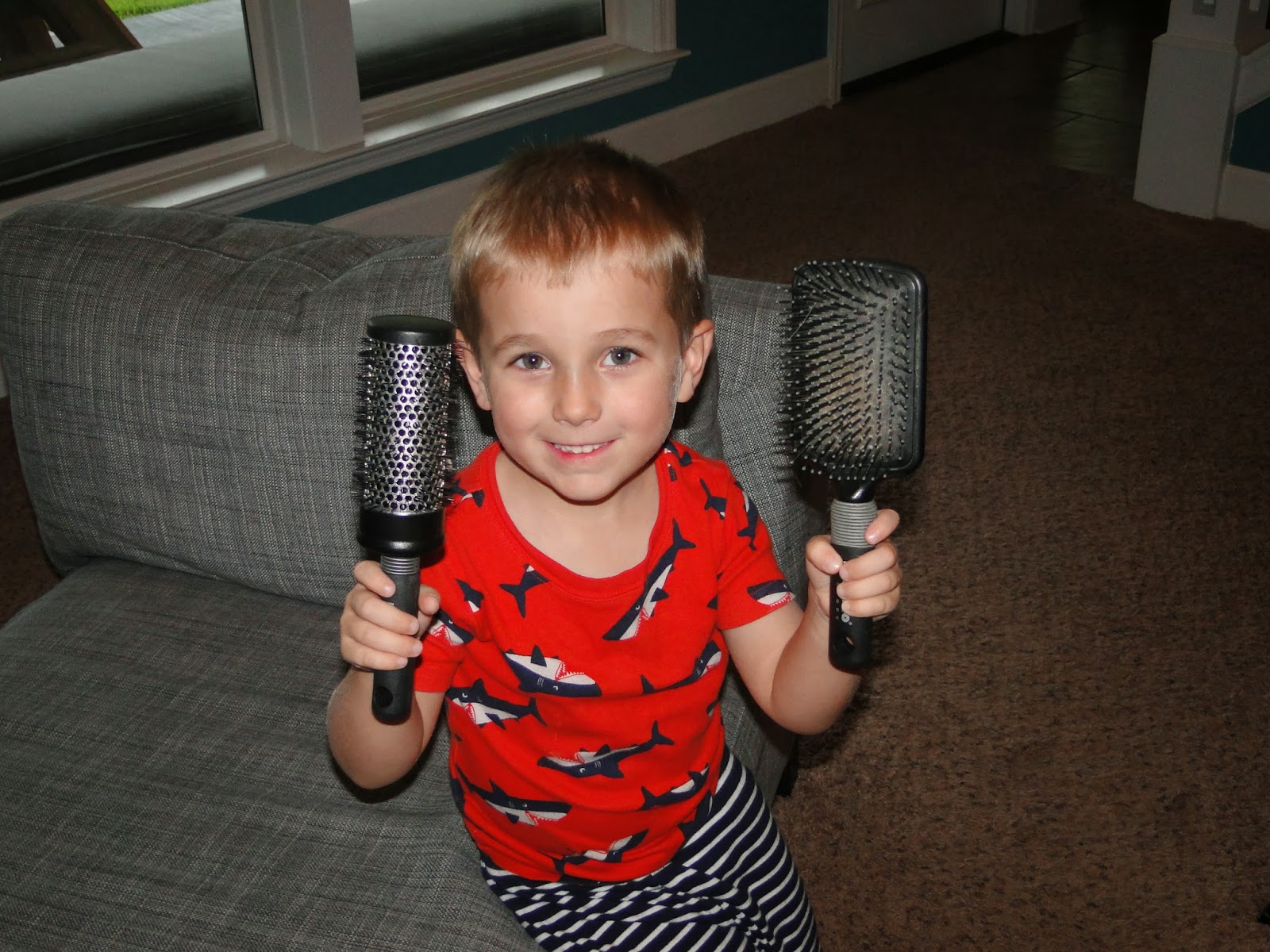 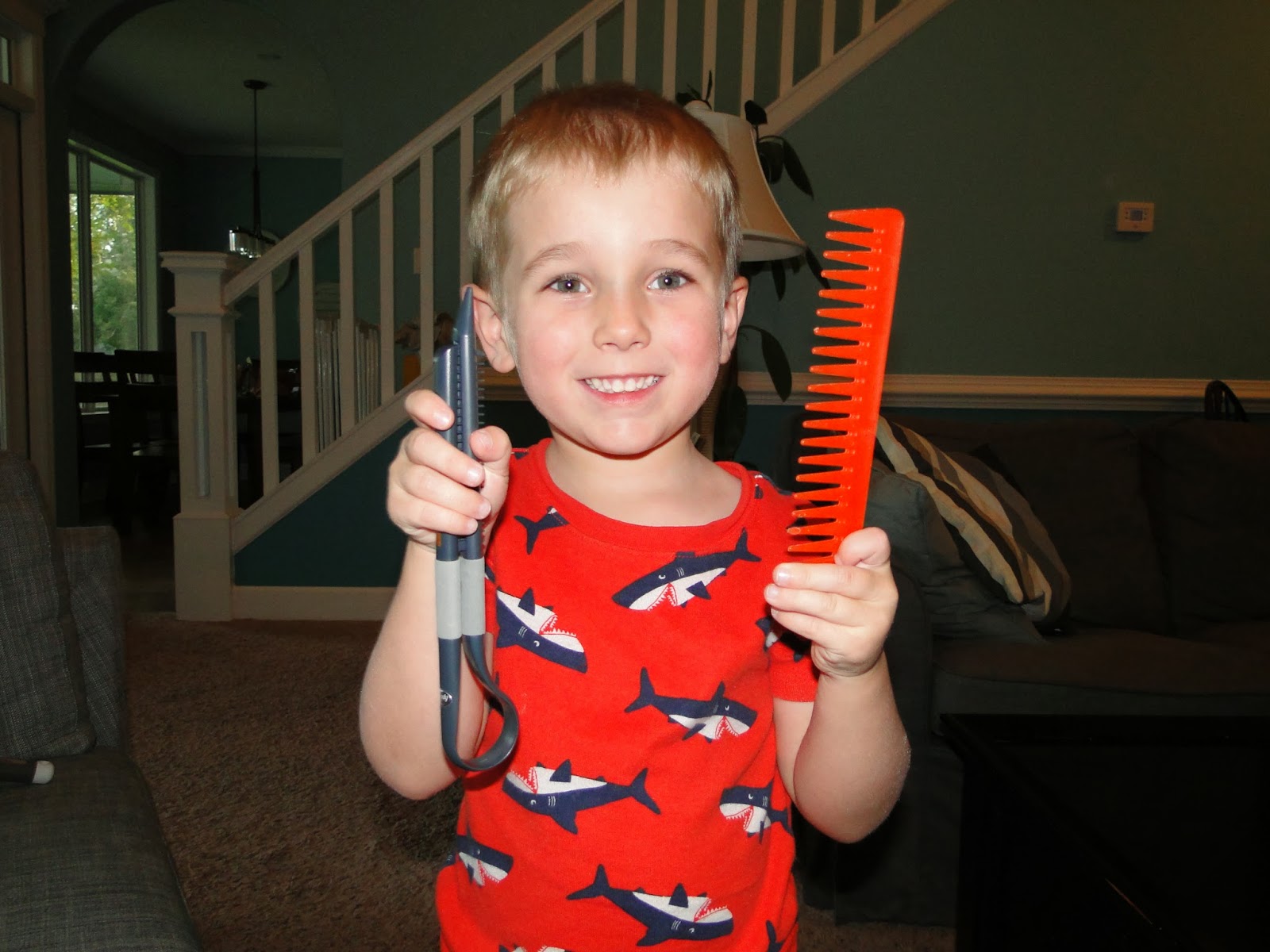 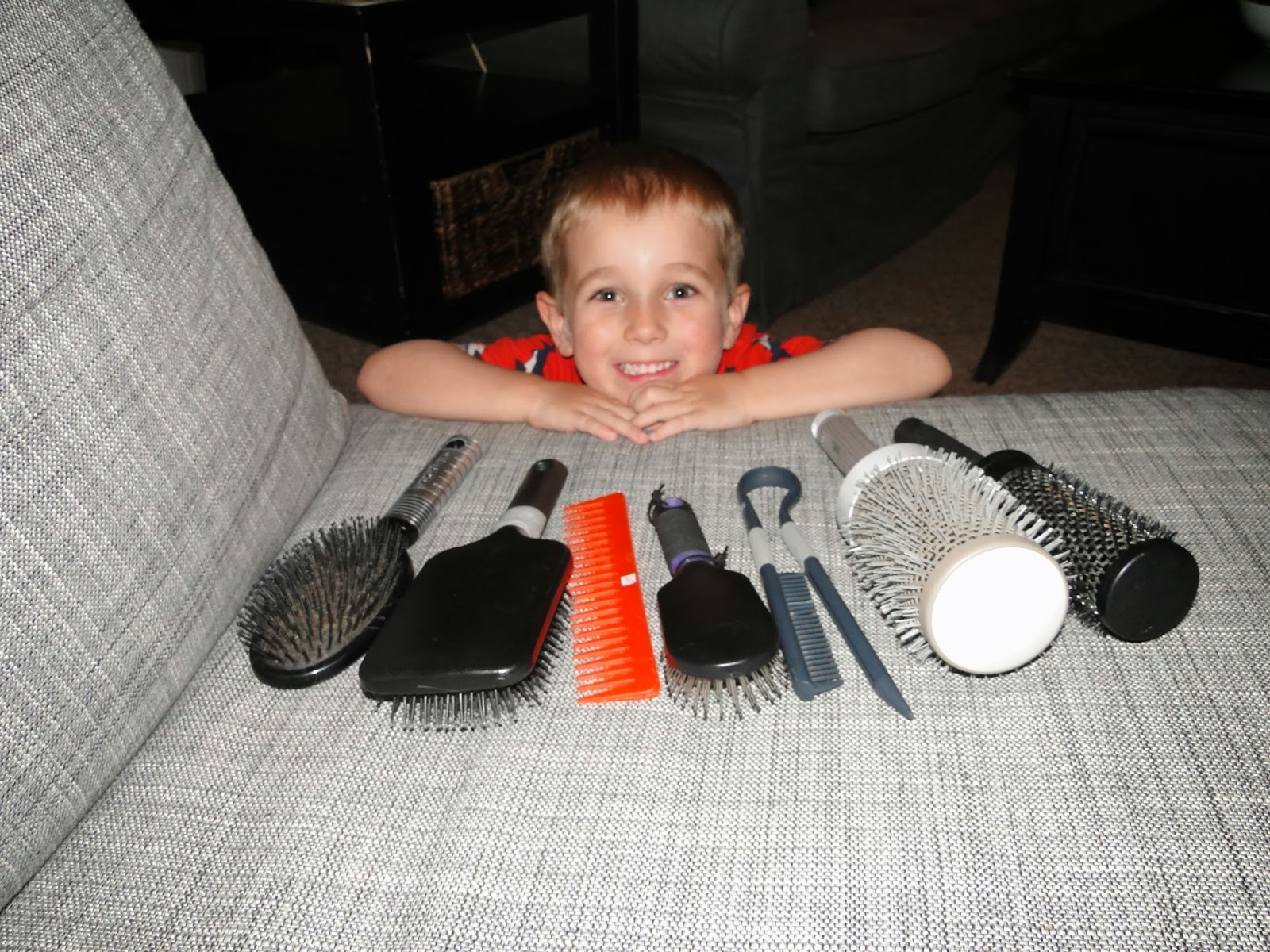 Games: Kye is still very competitive when it comes to playing games. Typically we will play a game more than once and usually we let him lose one time and win one time. He has gotten much, much better about being a good sport. We always shake and say “good game” and we don’t overly celebrate the wins or allow being overly upset about the loses 😉 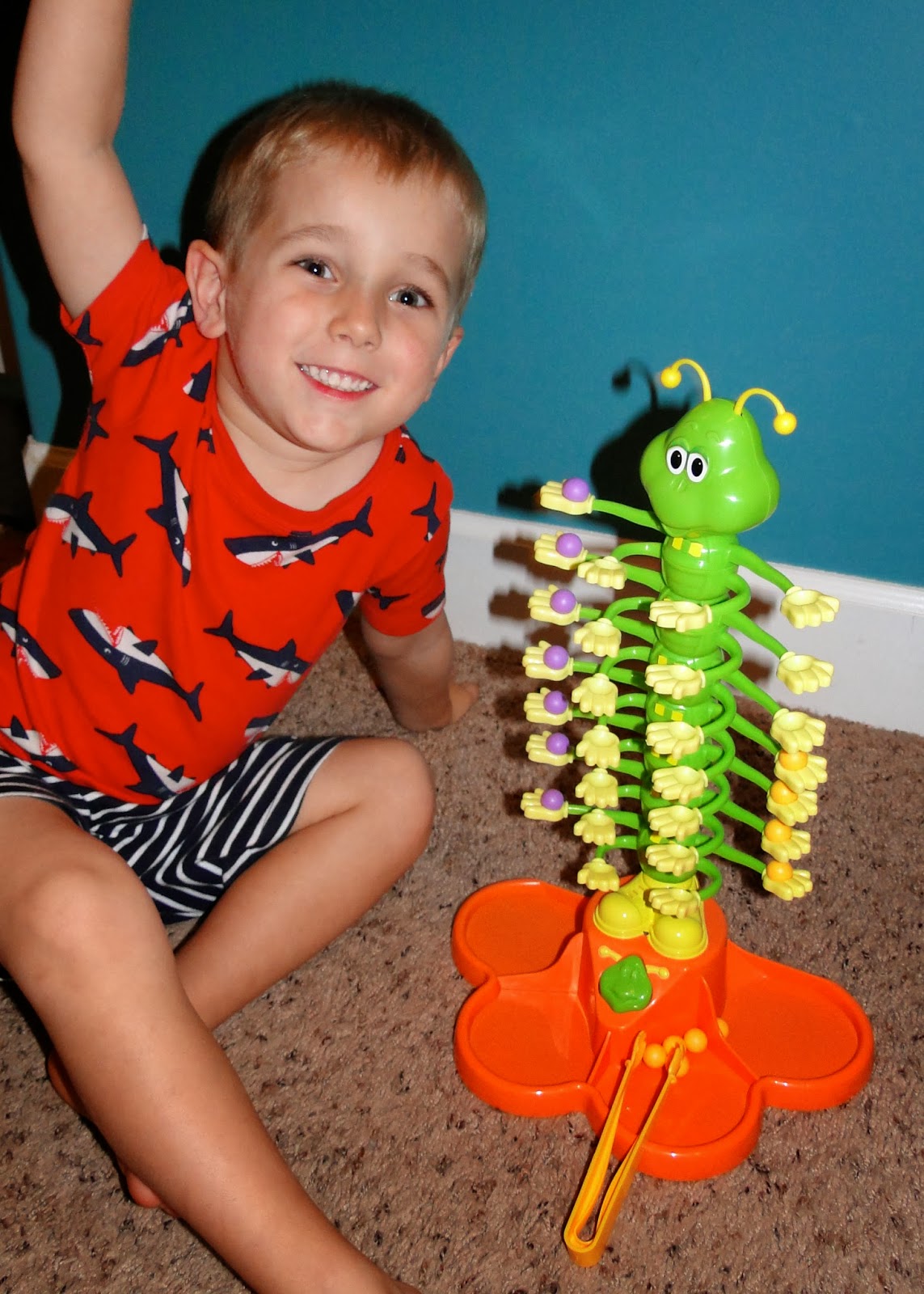 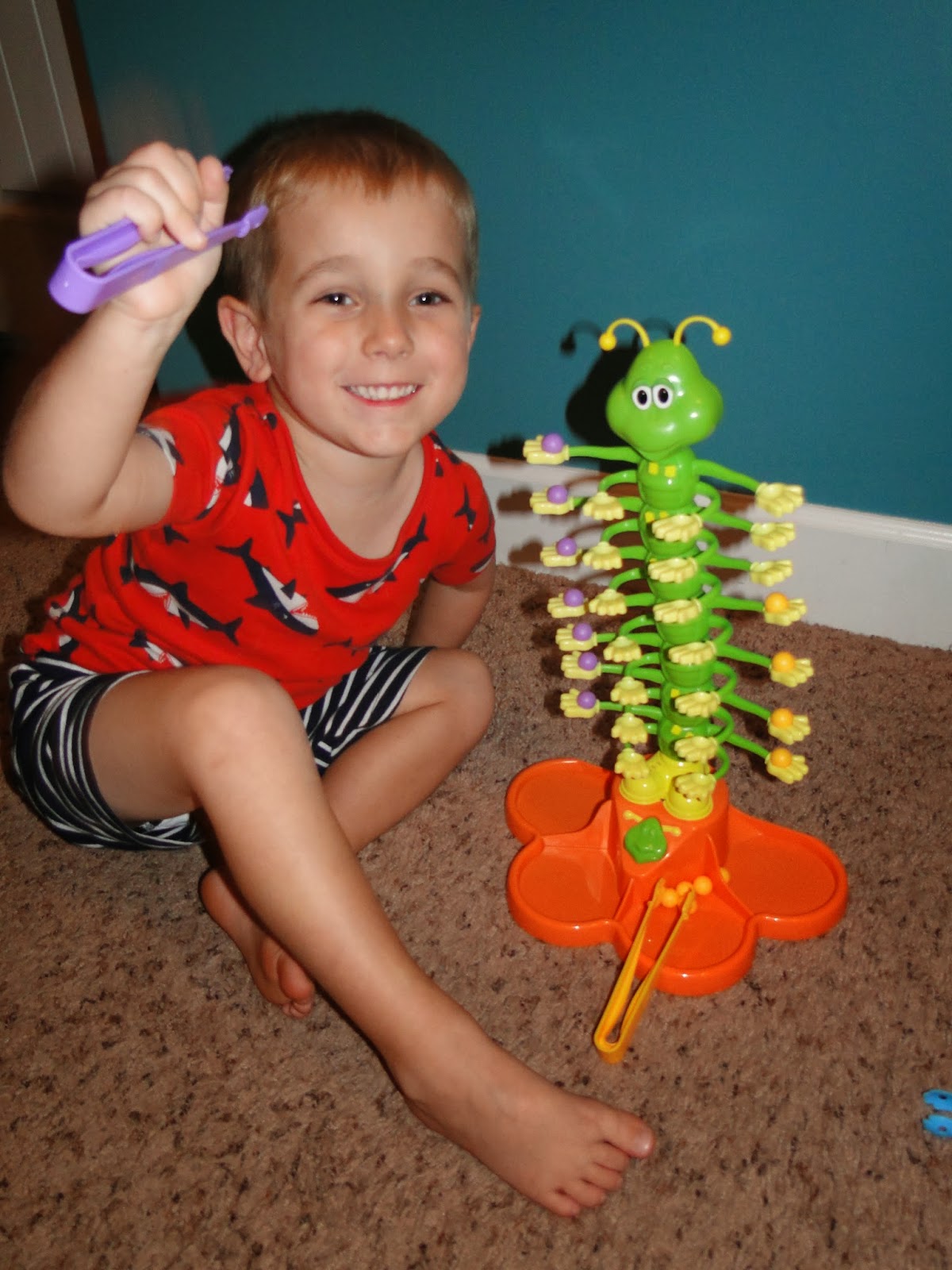 Sharing Duties: Since we leave every morning to go to school I now have each kid give a dog a treat. Kye gives Levi his treat and Britt gives Sadie hers when we lock them up in their crates! 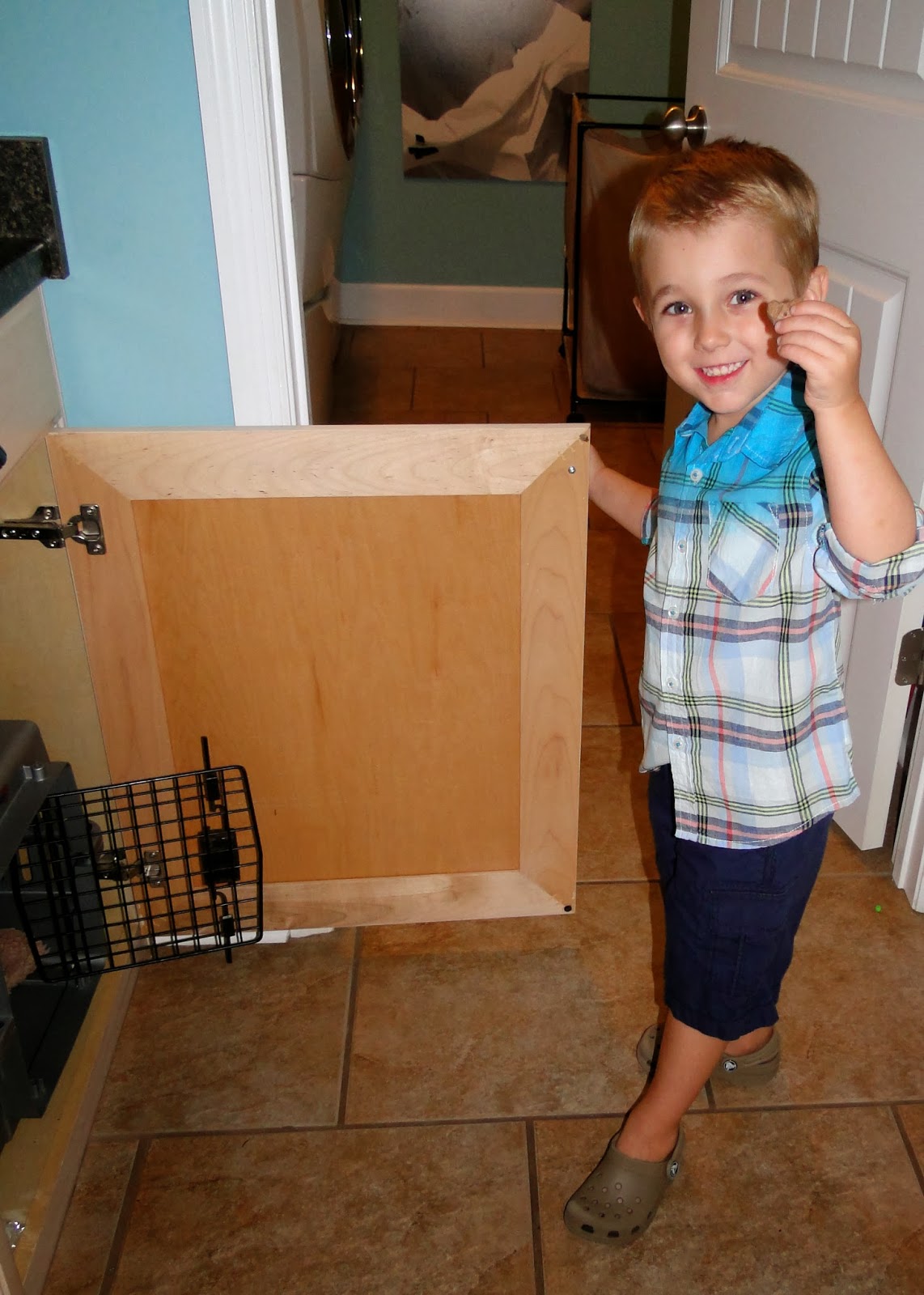 Church: This month one of our elders at church notified me and let me know he’d be speaking about Kye from the pulpit. When he started speaking he said that Kye is too pretty to be a boy hahaha. But then he talked about how after services one day Kye asked him if someone was going to be baptized because they had the screen raised (the baptistry is behind the projector screen). He used this example to talk about how our children soak up everything and how well Kye pays attention during services. He said it’s obvious Kye is paying attention to what is going on and listening. He complimented us as Kye’s parents. Kye was BEAMING with pride and after services he ran up to the elder, all on his own, and thanks him for saying the nice things about him! On our way home he told me he wanted to say a prayer for the elder because he loves him hahaha! It was SUCH a nice compliment and a blessing to us to hear for sure!

People at bible class continue to comment to us as well about Kye’s behavior and especially about his prayers. We hear often that he is very insightful and in touch with feelings which are both wonderful traits. At times Kye tends to be a little sensitive but that also makes him very empathetic towards others! I tried to get a video of him praying…Britt is pretty annoying in the background but you can hear some of it 😉 I’m especially so glad that he prayed for those people who don’t have teeth hahaha

Kye asked me several times this month about baptism and said he wants to get baptized. I told him the steps he would need to take and he said “I know all of that. Let’s take my bathing suit to church so I can get baptized!” I love how on fire he is for the Lord and how he has such a deep understanding at such a young age. Obviously, he’s not yet at an age of accountability but when that day comes…it will be the BEST day ever!!!

Having fun with a friend in bible class 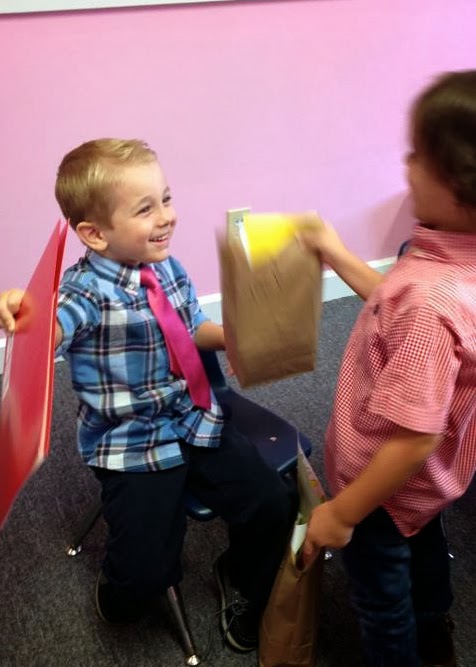 I love his self portrait hahaha 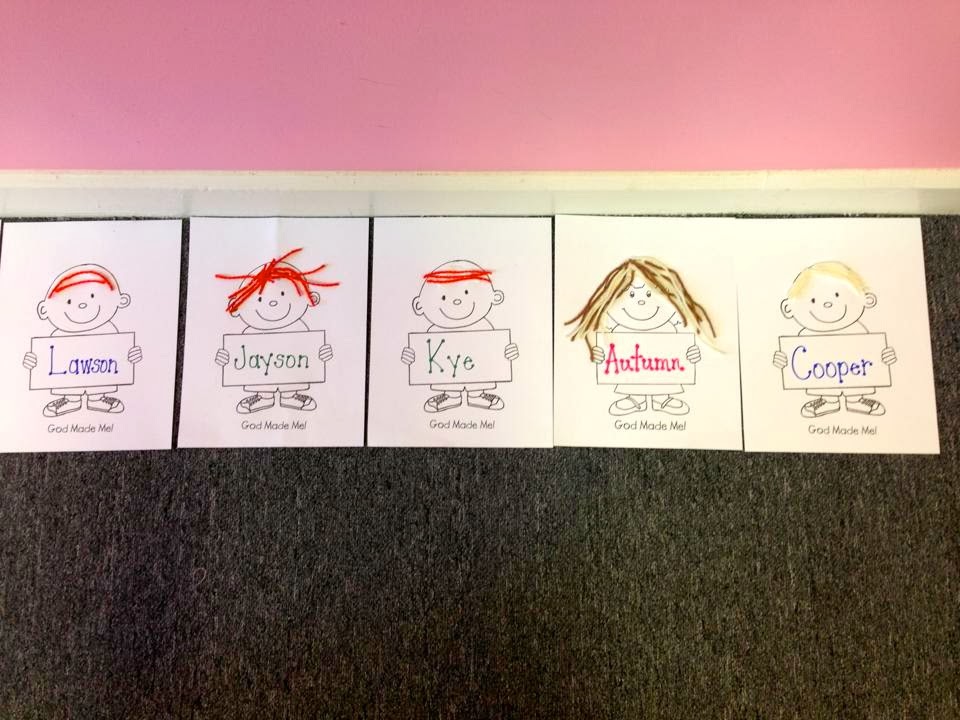 Naps: Well. The day has arrived. Kye is at a point where he rarely sleeps for his naps now. Britt naps from 1-4 so I put Kye down at 1 as well and have him stay in his bed until 3 or 3:30. Somedays he takes a cat nap. Somedays he sleeps until 4. Somedays he doesn’t sleep at all and just sits in his bed looking at books or talking to himself. I’ve started letting him get up, if he’s awake, around 3 or 3:30 and letting him have some solo play time. Now that he’s at school every day he no longer gets independent playtime so this is a good time for him to do that and be able to play freely with his toys without having to share with sister 🙂 It is going well so far but I do find that on the days he doesn’t sleep, he’s a little grumpy. I have NO plans to let him completely skip nap time anytime soon though!!! I’m holding onto my sacred 1-3 as long as I possible can haha! 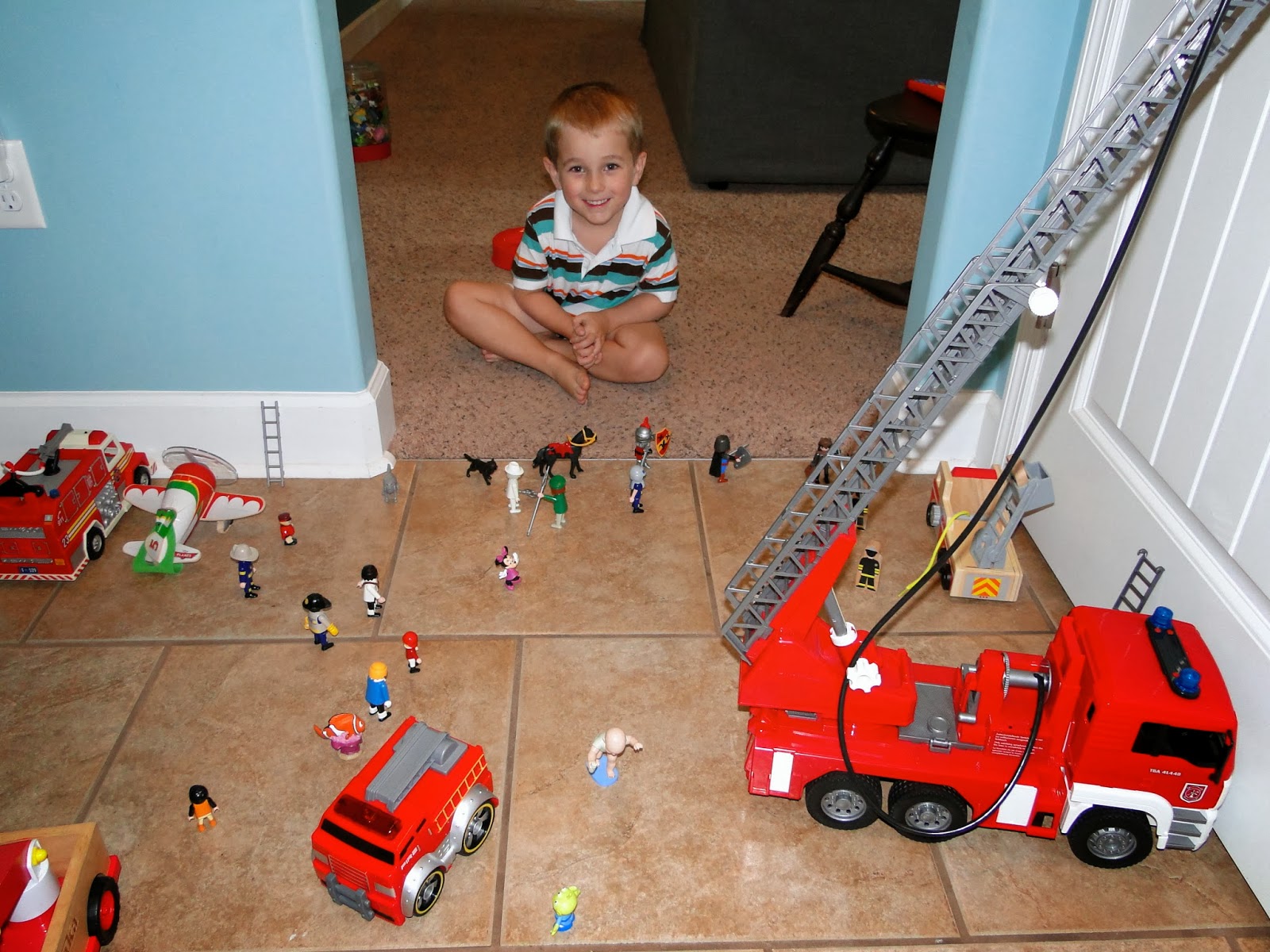 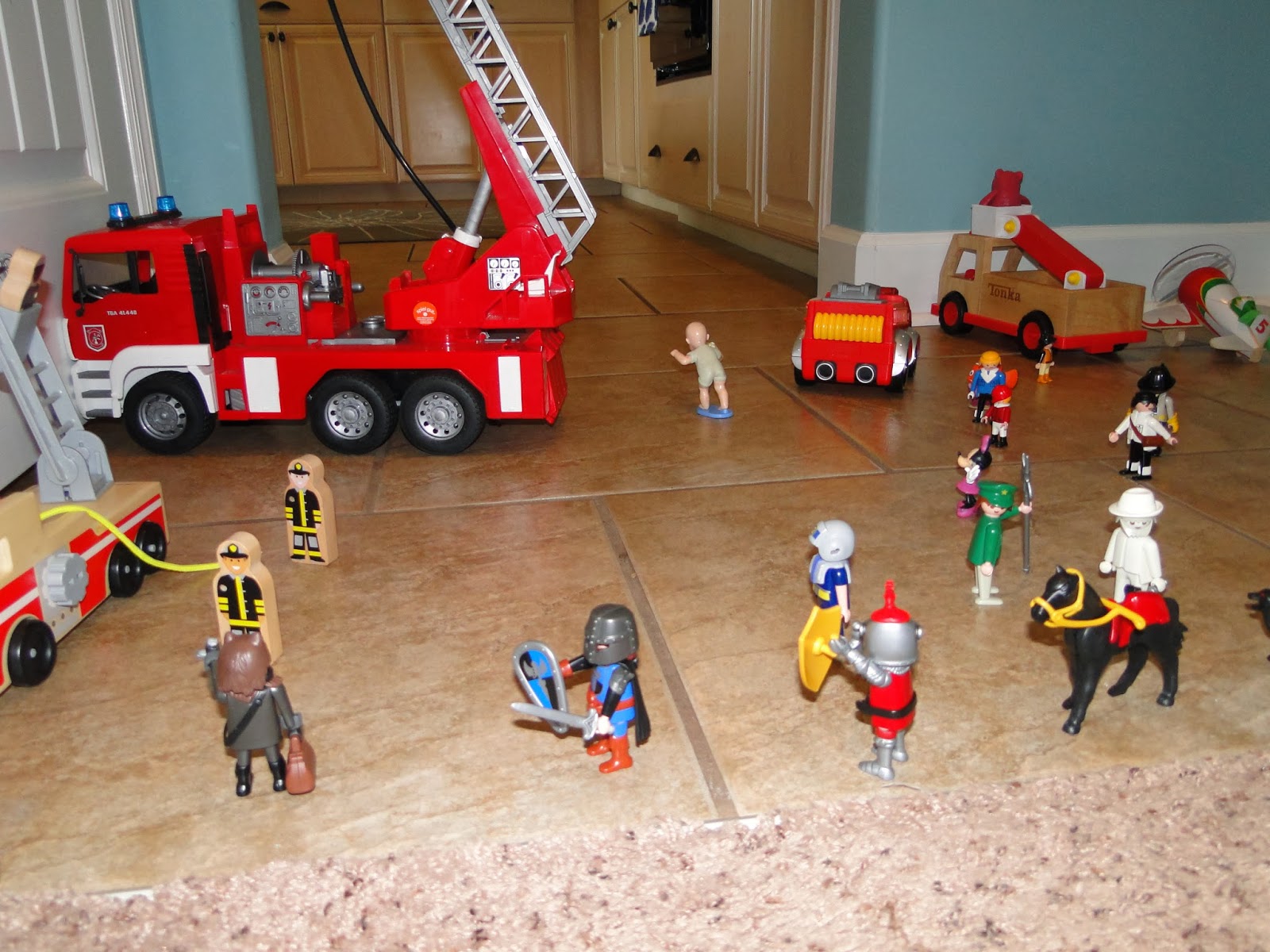 Other Stuff Going On This Month:

I love my big boy! 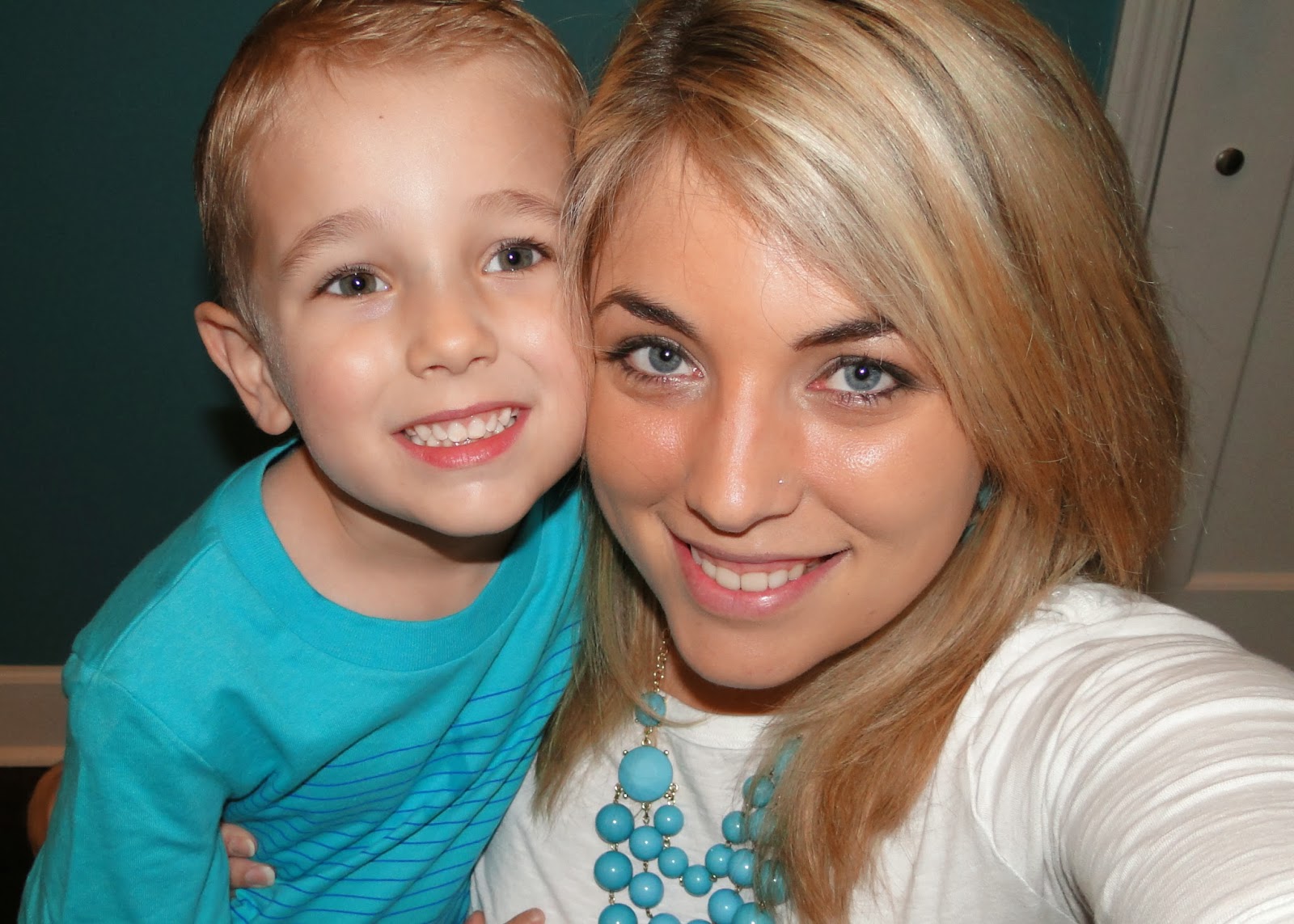