Kelley went to high school with Zach and now shares a last name with me so duh I like her 🙂 She has SUCH a cool job working in the nursery at the hospital (and was privileged enough to see the fresh-from-the-oven Mr. Kye!) so she’s got PLENTY of advice if anyone needs any with their breastfeeding journey! Her story is wonderful and it’s so neat to see a mother so devoted to nursing her child. Thanks for your story Kelley, and another reminder to the readers to enter the giveaway!

I grew up watching my mom breastfeed my brother, my aunt breastfeed my cousin and I think having that familial experience really laid a foundation for me and made my decision to nurse easier. I, of course, did not think about breastfeeding much until I started nursing school and went through my first maternal child class where I had an amazing teacher who was totally for encouraging breastfeeding. She was really well read on all the research out there on breastfeeding and its benefits. After taking her class, and studying the miracle of pregnancy and childbirth, I knew the women and children area was perfect for me. I could help moms breastfeed their babies! I got a job in the nursery and I saw those babies latch on and watched those mothers flinch and sometimes even scream, but it was so impressive to me to see the ones who toughed it out. I would sometimes sit and ask them how it felt and we would talk about how in life many things worth having are not easy.

I could not wait to breastfeed my baby one day and as soon as I found out I was pregnant I got on the Le Leche League website and I spent many afternoons talking with the lactation consultant in my nursery and I went out and bought the best pump and bra and night gowns and I was just pumped. As soon as Raeley came out I wanted to get her latched on! She was 4 weeks early so of course they had to observe her for a bit and we had to be careful to keep her warm while she nursed which made it a little more complicated than some situations. However, I gladly accommodated and when I tried to put her on for the first she just kind of smacked and did not want much to do with it. My husband was all like, “She does not want it, she may end up just wanting a bottle!” My mother was in the room and acted quickly so as to save his life and added, “She is just getting it figured out, you can’t give up on her yet” I knew that some babies can take about a day to really get hungry and some take weeks to teach how to properly latch so I was not worried.

We only stayed for 24 hours because my hubby could not sleep and being a nursery nurse I knew I could take care of her but looking back I wish I had taken advantage of all the time I could have with the lactation consultant and my dear friends who had been latching babies on for years. Raeley has a slight tongue tie so her latch was pretty bad and maybe an extra day or so in the hospital could have made a difference. I guess we will never know! All I know is she did love to nurse and I heard her swallowing before we left the hospital but she was tearing me up! I mean before we left the hospital I had SEVERE nipple damage. I mean bleeding, blisters, the whole nine yards. She was born on a Saturday morning so most of the nurses were relatively new and not well experienced with breastfeeding. They tried their best but she just could not get a good grip. We came back for the 48 hour follow up and the lactation consultant got a look at me and she shuttered! I mean, she said it was some of the worst damage she had ever seen! I felt bad, like I had been doing it wrong and I am “supposed” to be good at this! 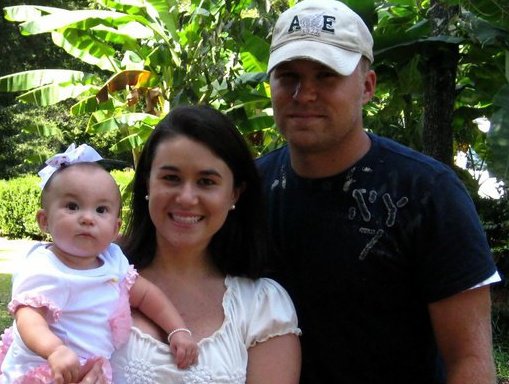 She worked with us for about an hour that day and finally got Raeley on good, it still hurt very badly, but she gave me some really good tips like pumping before feedings to bring the nipple out and airing my nipples out when possible to help them heal. She told me about a product that is like a gel pad that you put in the refrigerator and after you nurse and air your nipples out you put the cool get pad on your nipple, then cover up with your bra and it is soooo soothing. I remember her latching on and I would just shake and then my uterus would contract too, I wanted to give up so badly but this was so important to me and it was so sweet when she nursed. I felt so bonded with her and I knew I was giving her something only I could. I breastfed Raeley exclusively for three months until I went back to work and I had built up a nice stash in the freezer by pumping in between feedings. I went back to work 3-11 so I would nurse her at 1:30 before I left and whoever kept her would feed her with an adiri bottle at 4:30, 7:30 and then I would nurse her when I got home to sleep and then every three hours! I am not sure if she really needed those feedings or if she just was spoiled but she did nurse every three hours until she was about 6 months old! I think she finally slept five hours straight when she was like 10 months old.

People would say they were sorry for me and that I needed to add cereal to her nightly feeding but I really did not mind getting up with her! I mean, one day she will not want much to do with me so I wanted to take advantage of this time. I would pump every 3-4 hours at work so I could keep up my supply for the week I was off. She did not take very well to the bottle from me so I have never fed her from a bottle. She got baby food at 6 months, and she is now 16 months old and eats pretty much what we eat. She still nurses every morning before I go to work, every afternoon when I get home and before bed. I plan to nurse her until she is 2, since that is the recommendation from the CDC, WHO, AAP and she and I enjoy it. I think that is the most important thing. The mom and baby have to both be benefiting from it. It is not for everyone to nurse for as long as I have but I really enjoy it. It is our special time to just sit and sing, and hug. She likes to play with my hair, she sometimes will “tickle” me so it is just a time for us. She has her time with daddy to go outside and play with the animals and she nurses with mommy! I sometimes think that is all she knows me for!

I plan to wean her from the morning feeding by 18 months, the afternoon feeding by 20 months and the nighttime feeding my 24 months. We will see. I am pretty laid back about it and honestly I am not going to stress if she does want to stop the nighttime feeding right away. I know in some cultures kids nurse up to age 7! I don’t want to go to that extreme but I also don’t want to forcefully take something away from her that I have made such big part of her life. I believe breastfeeding is the best option but I have seen first hand it is not always an option and no mom should ever feel guilty about her decision to bottle feed, or breastfeed. I have had people say some pretty mean things to me about still breastfeeding my daughter but I feel like it is my family’s business, but in their defense as much positive information as their is on breastfeeding our society does not support it like other societies so it is just seen as some weird thing some moms do instead of the natural miraculous function that God our creator intended it to be.