When we got off the train in Florence we didn’t really have a set plan. Since our first morning train ran late we we sort of pressed for time. I would need to pump prior to boarding the train back to Rome and we wanted to find a place to eat steak for dinner. Florence is famous for it’s HUGE steaks and I wanted to make sure Zach got to try one 🙂

We decided to first go back to where David originally stood. When we first saw him I didn’t realize we wouldn’t be allowed to take pictures of the real thing so I wished I’d taken more of the fake 🙂 You can read more about David here. 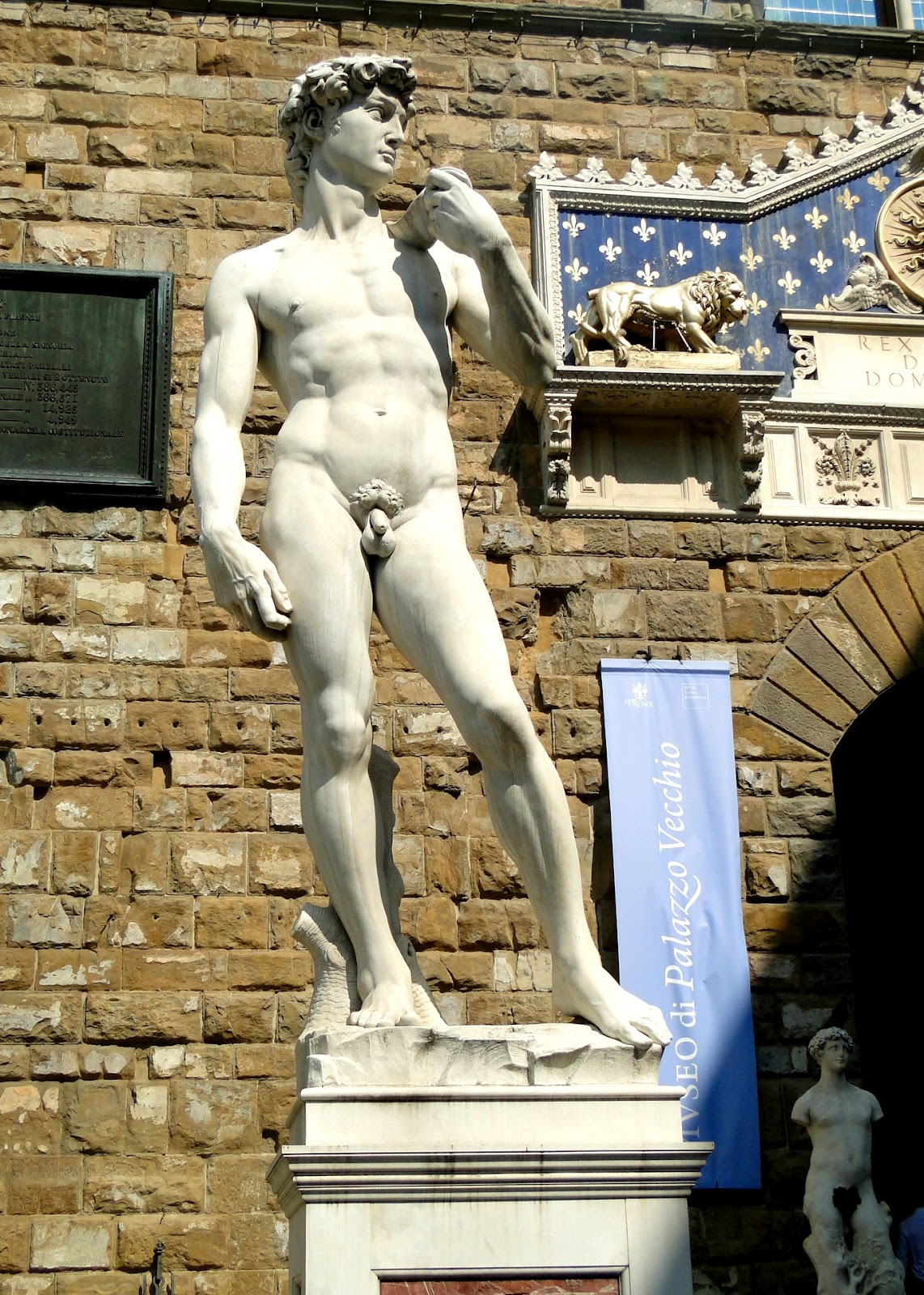 Close-up of his over-sized hands 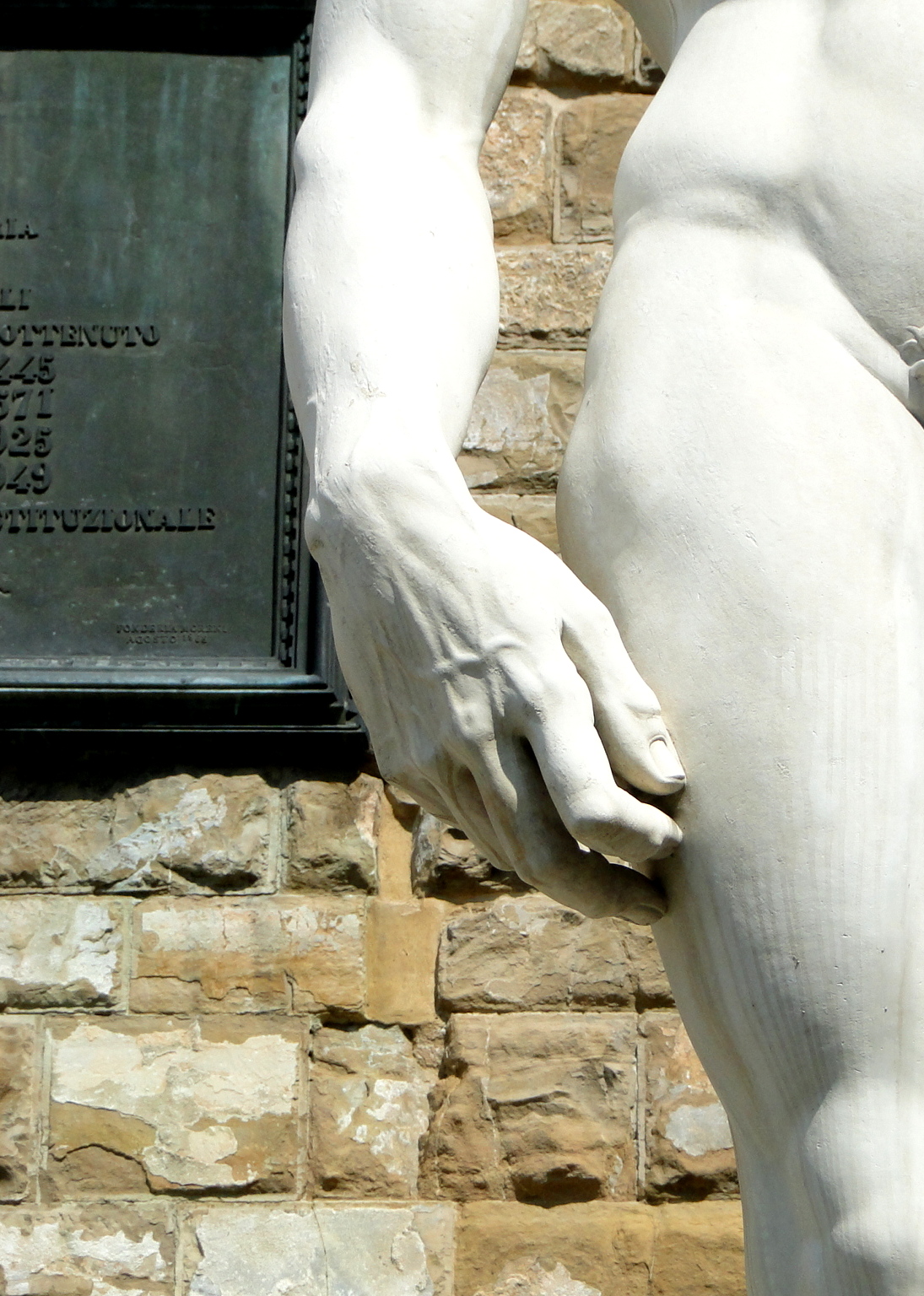 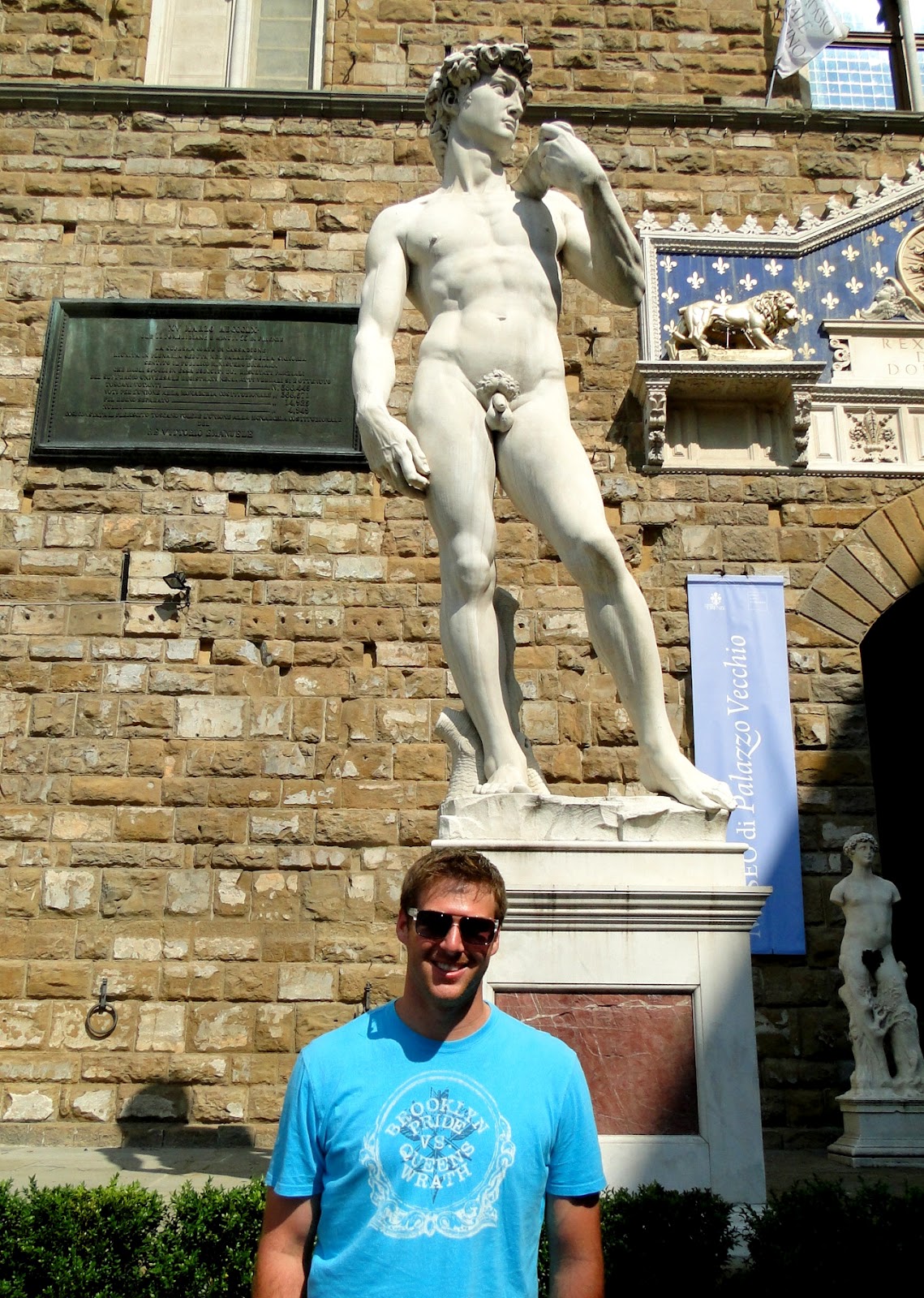 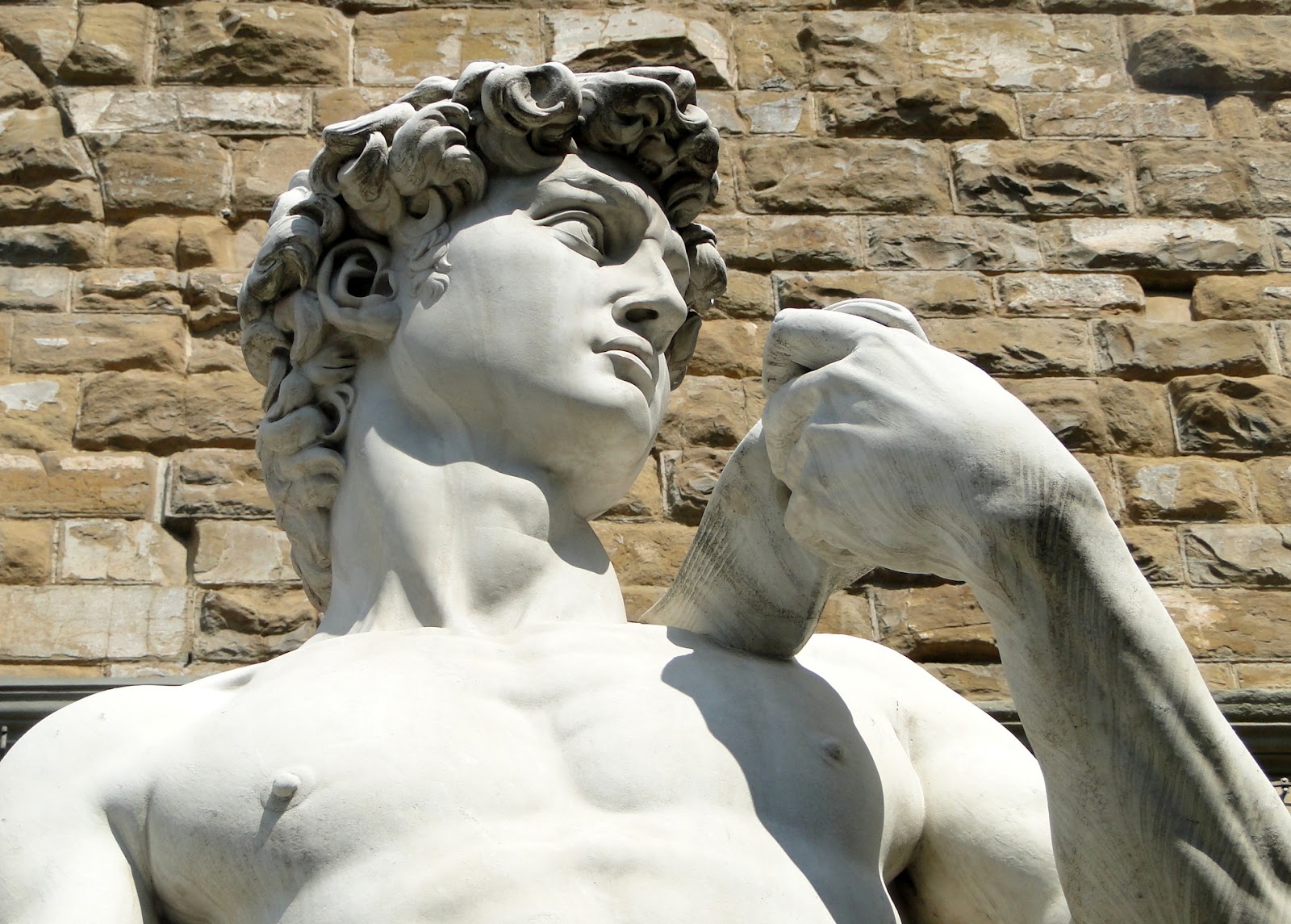 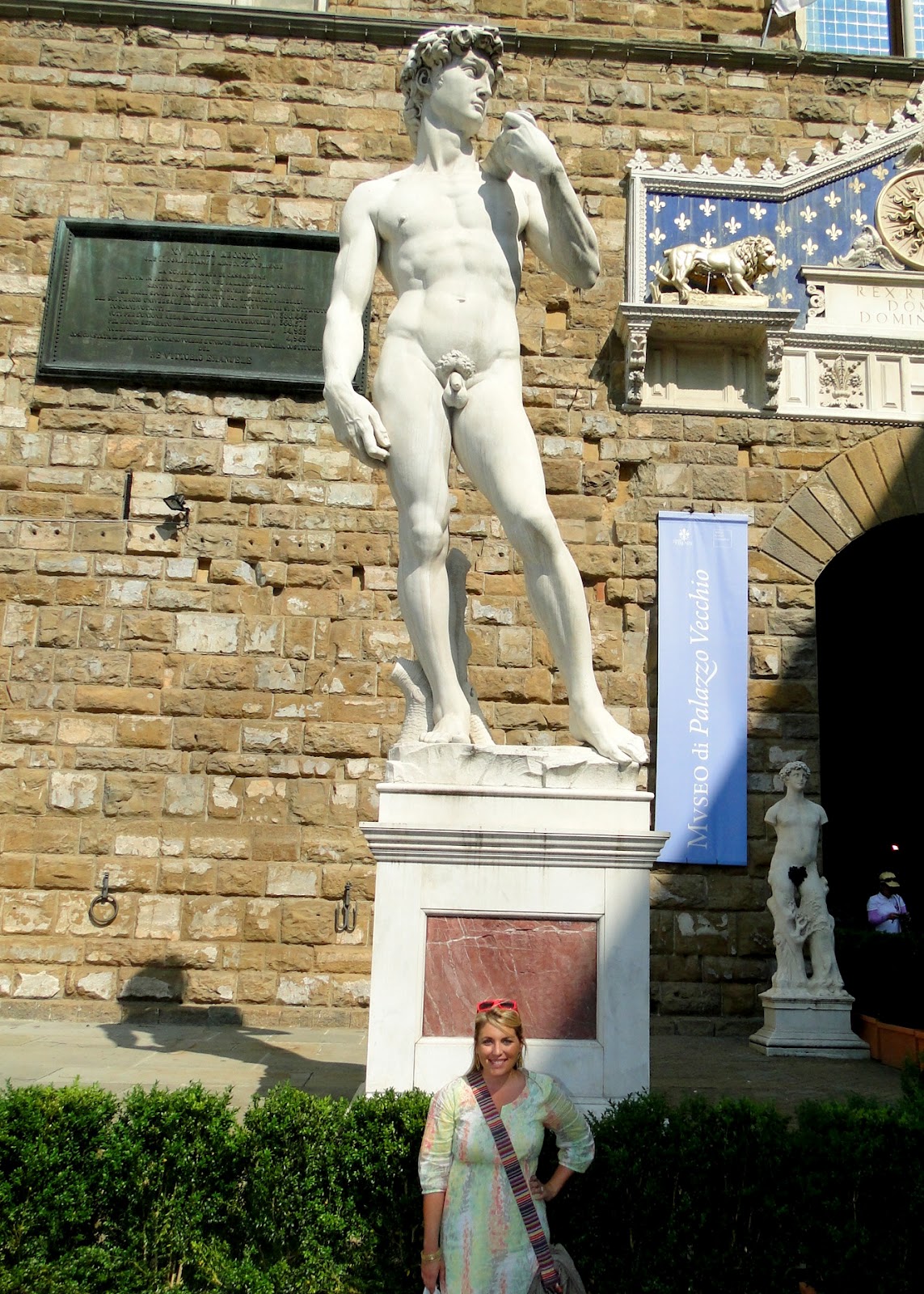 It was MUCH less crowded than our original tour of the area on Sunday. We decided to go back to Santa Croce. We didn’t get to spend much time there our first day and we wanted a few more pictures there as well. You can read more about it here. 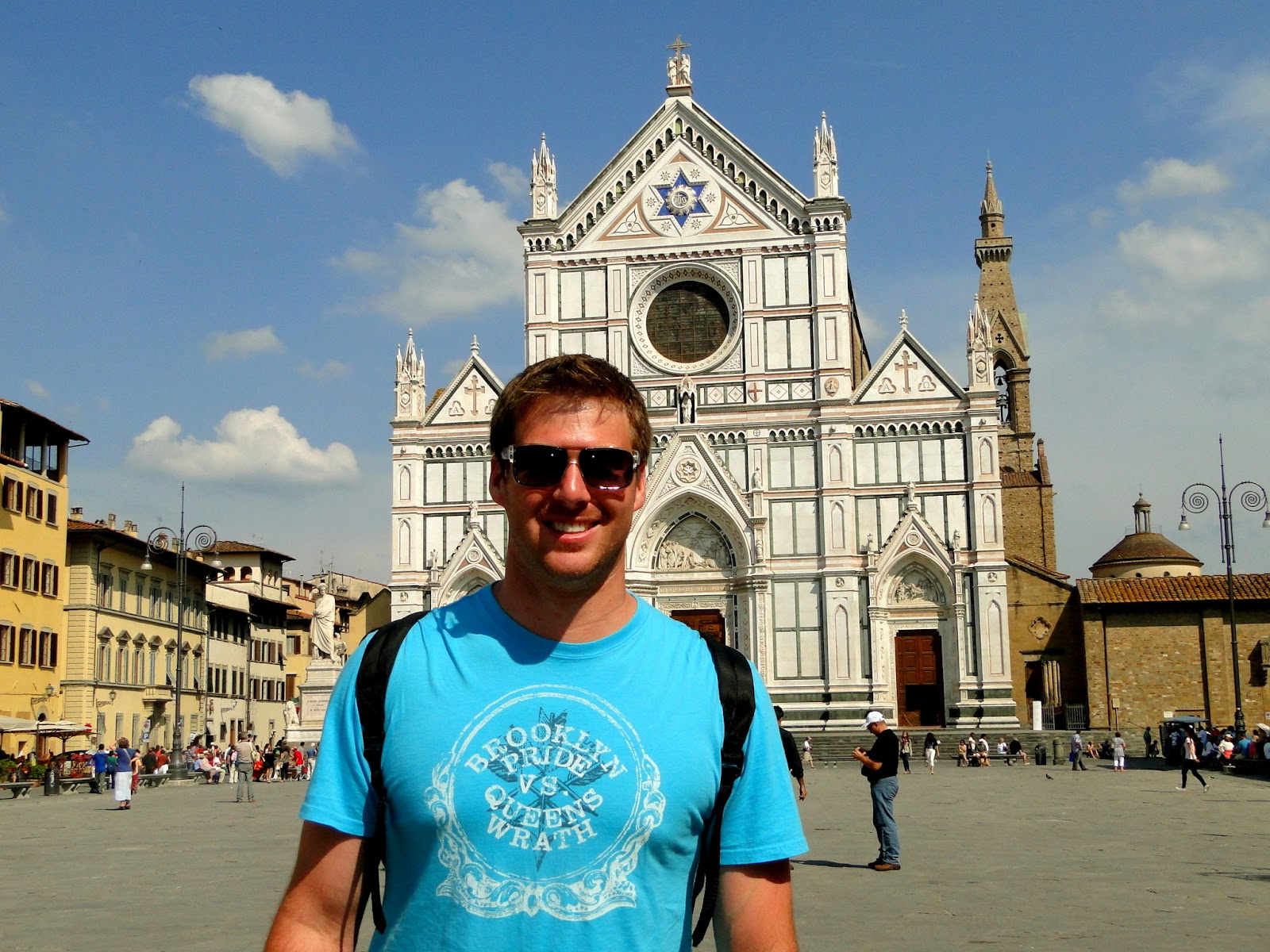 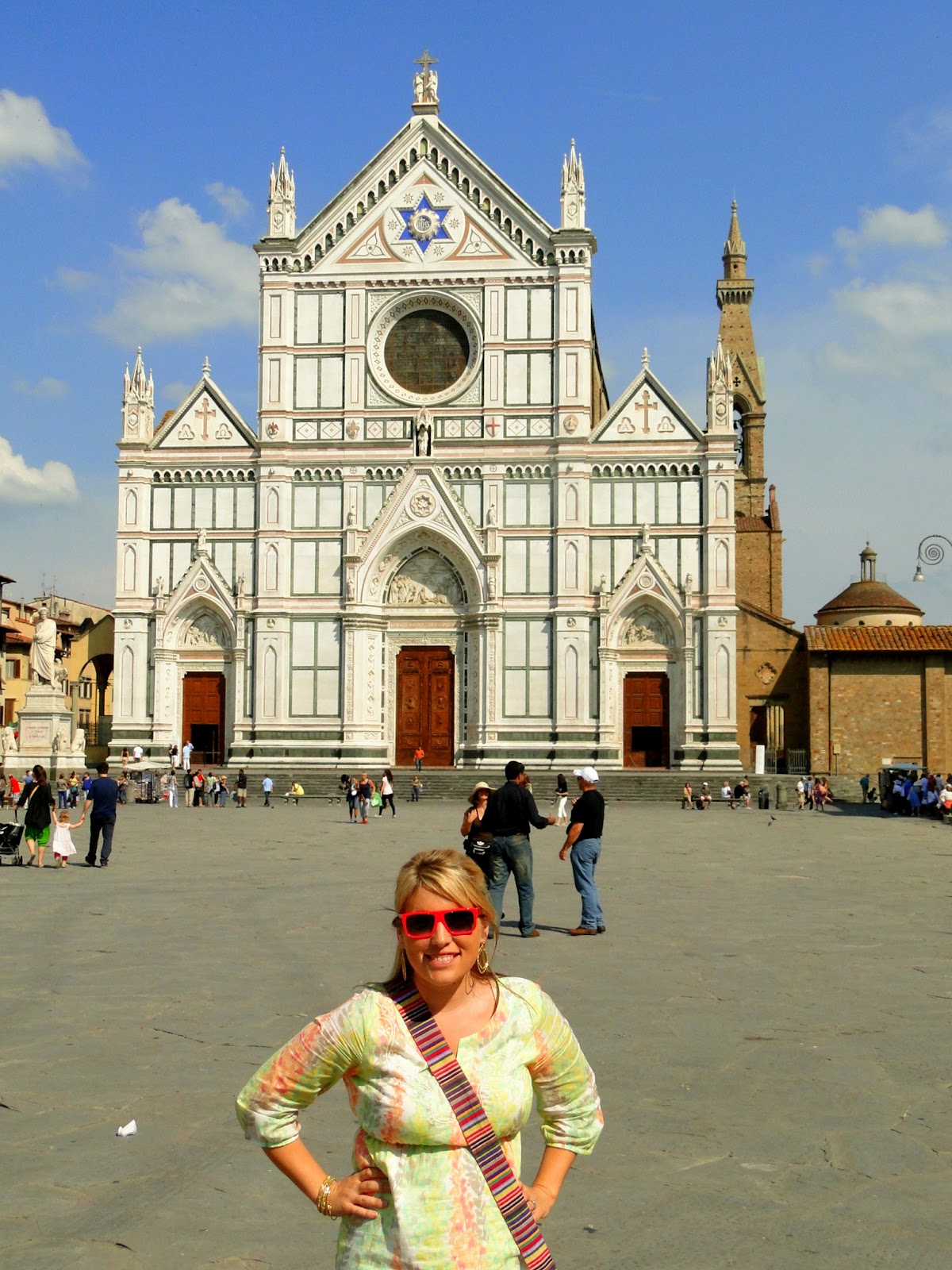 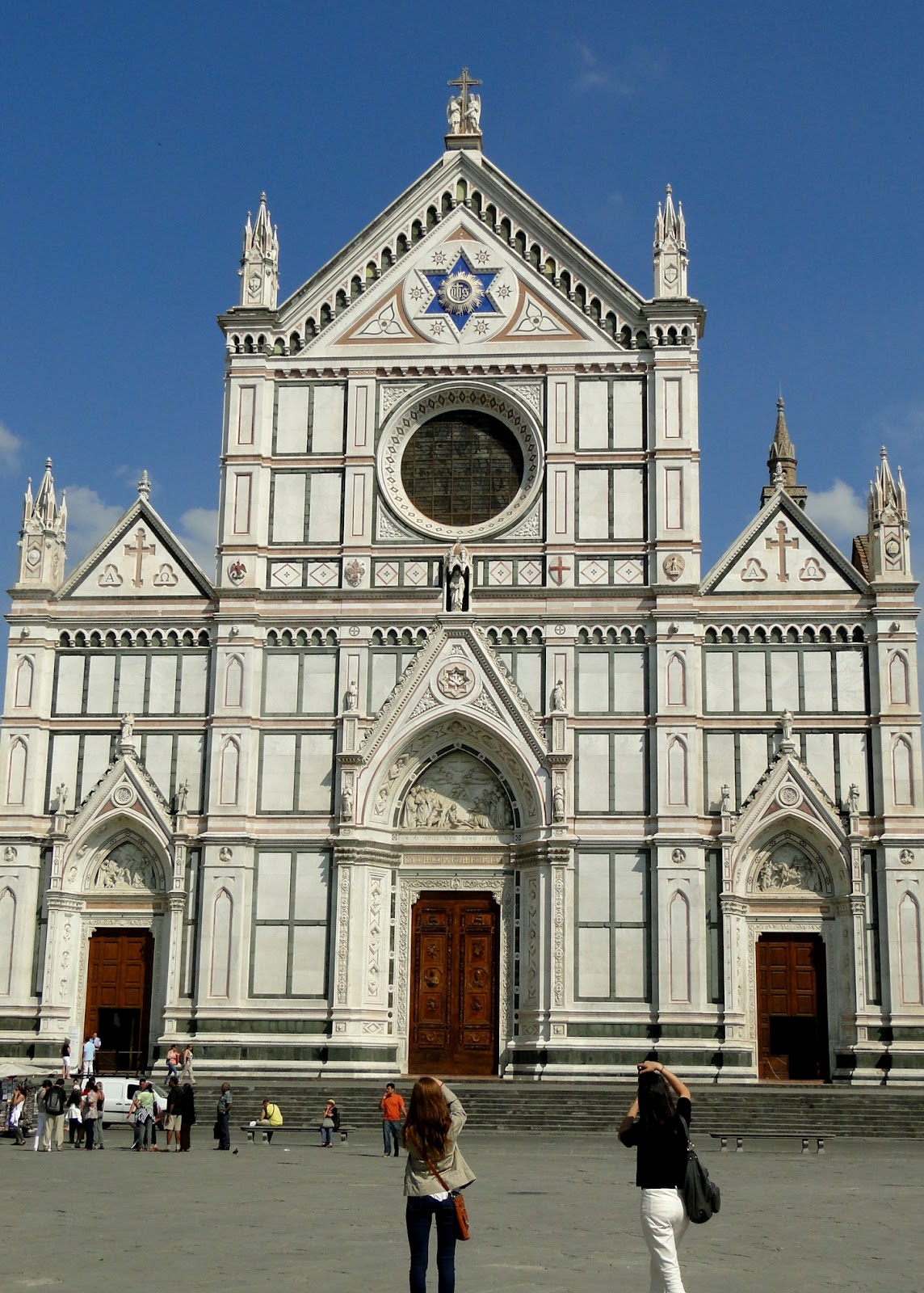 Star of David at the top 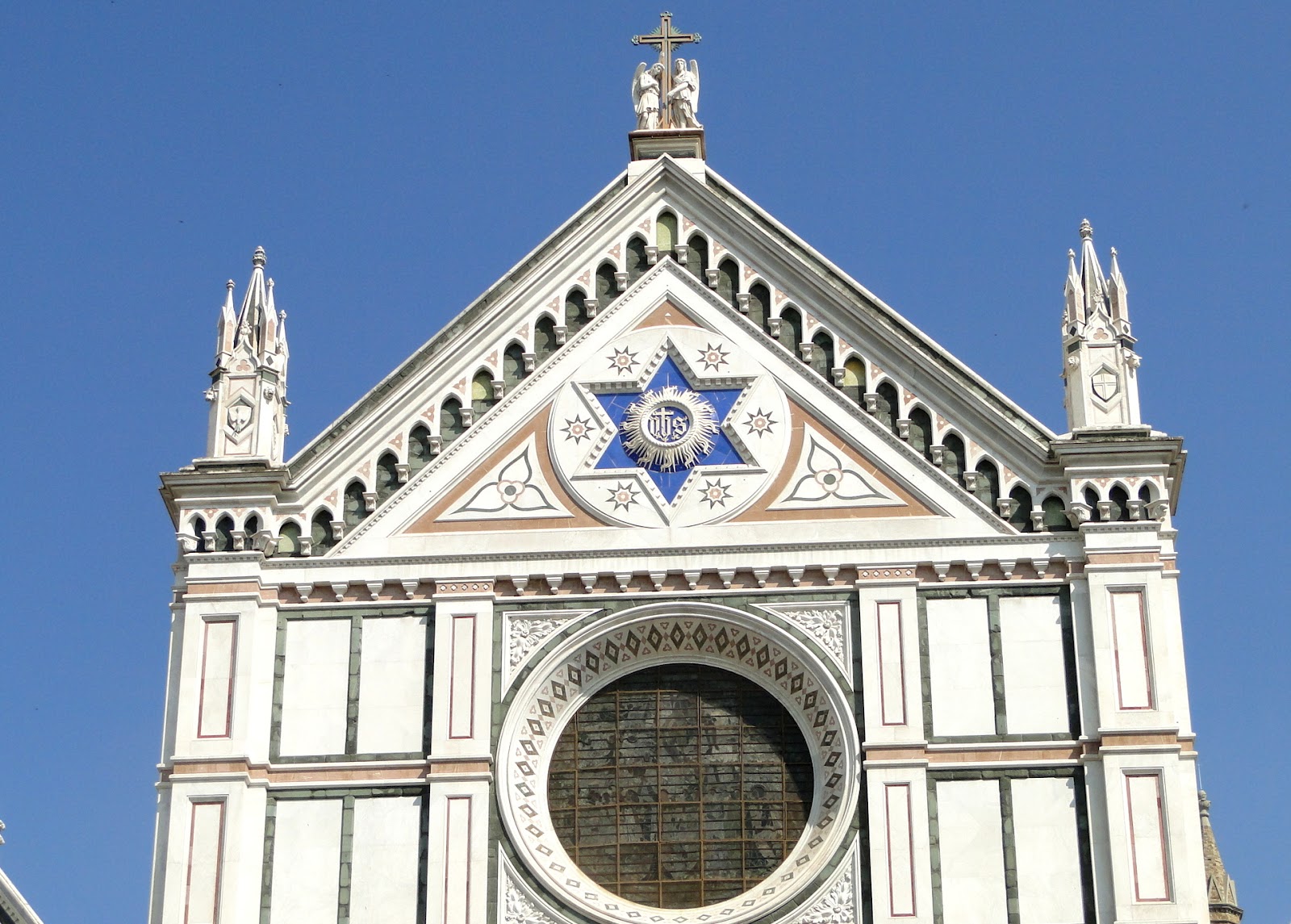 Originally when we knew we’d be coming back to Florence we wanted to go inside Santa Croce. Since we were pressed for time, we didn’t really know what to do. Why spend the money if we didn’t have time to see it??? We were debating it when a guy walked up to us and asked if we were going to go inside the church. We told him our dilemma and he said that the whole thing took him about 20 min and that he had an extra ticket he bought on accident that we could have. So sweet of him! We took that as a sign so we went inside. 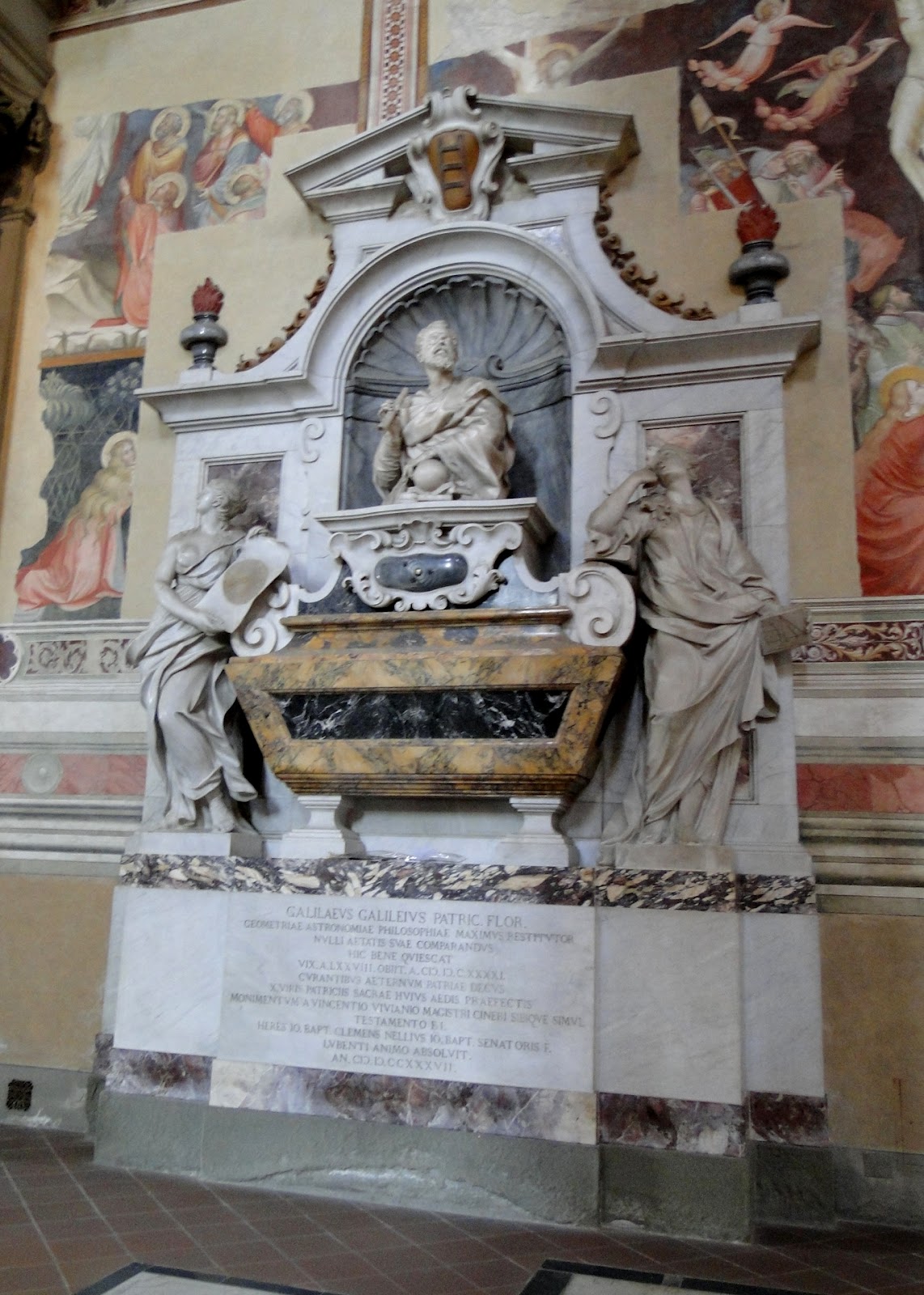 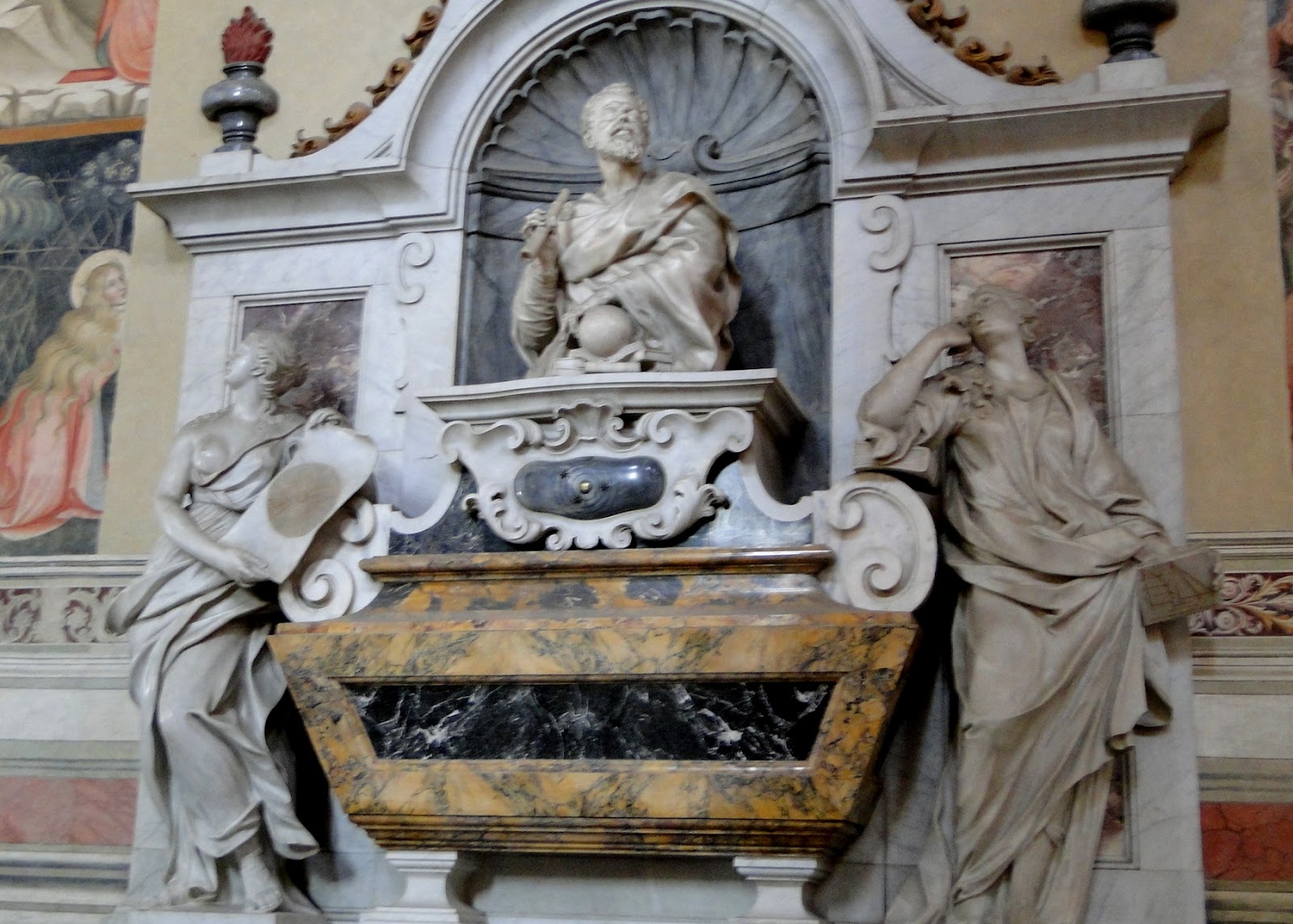 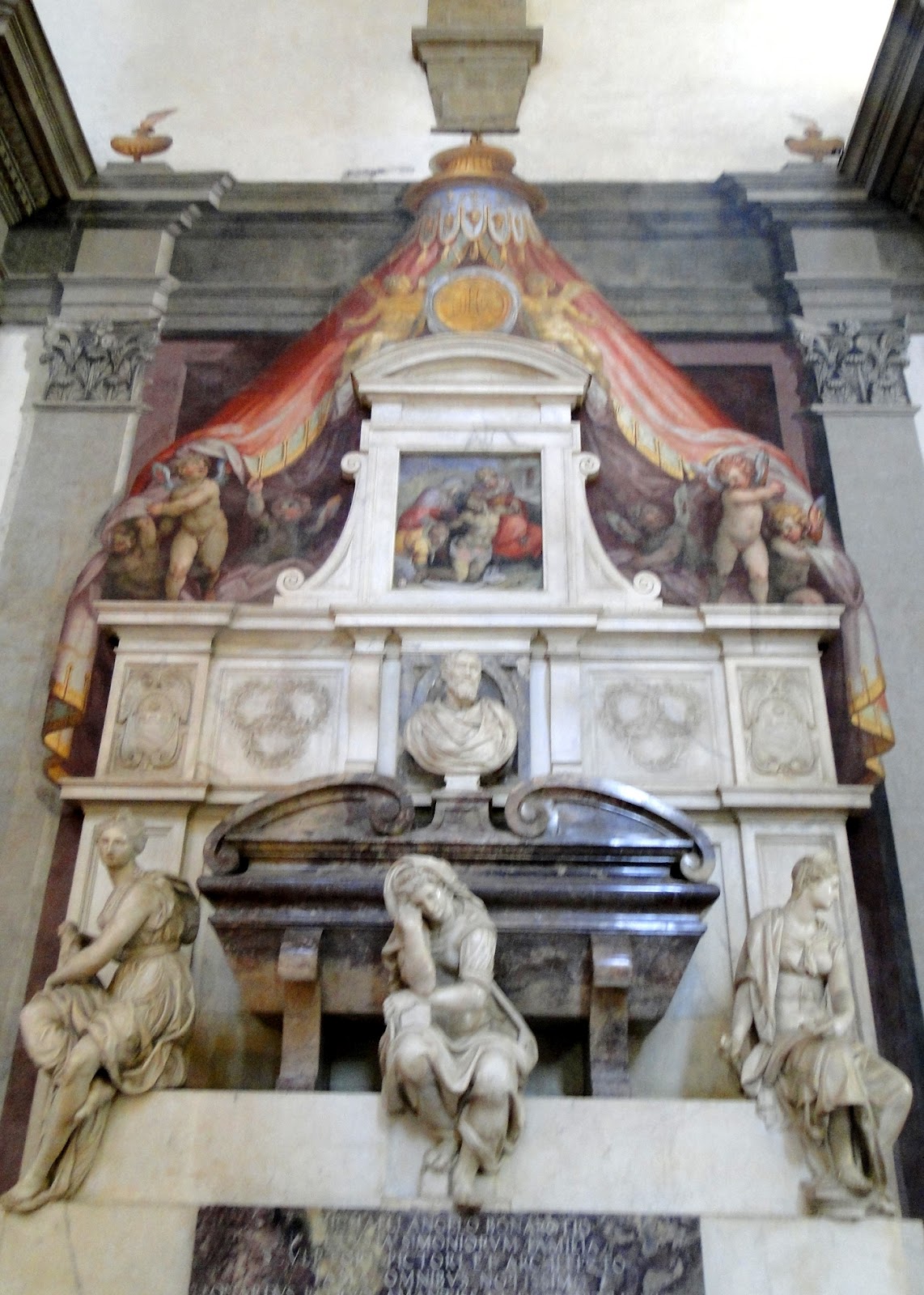 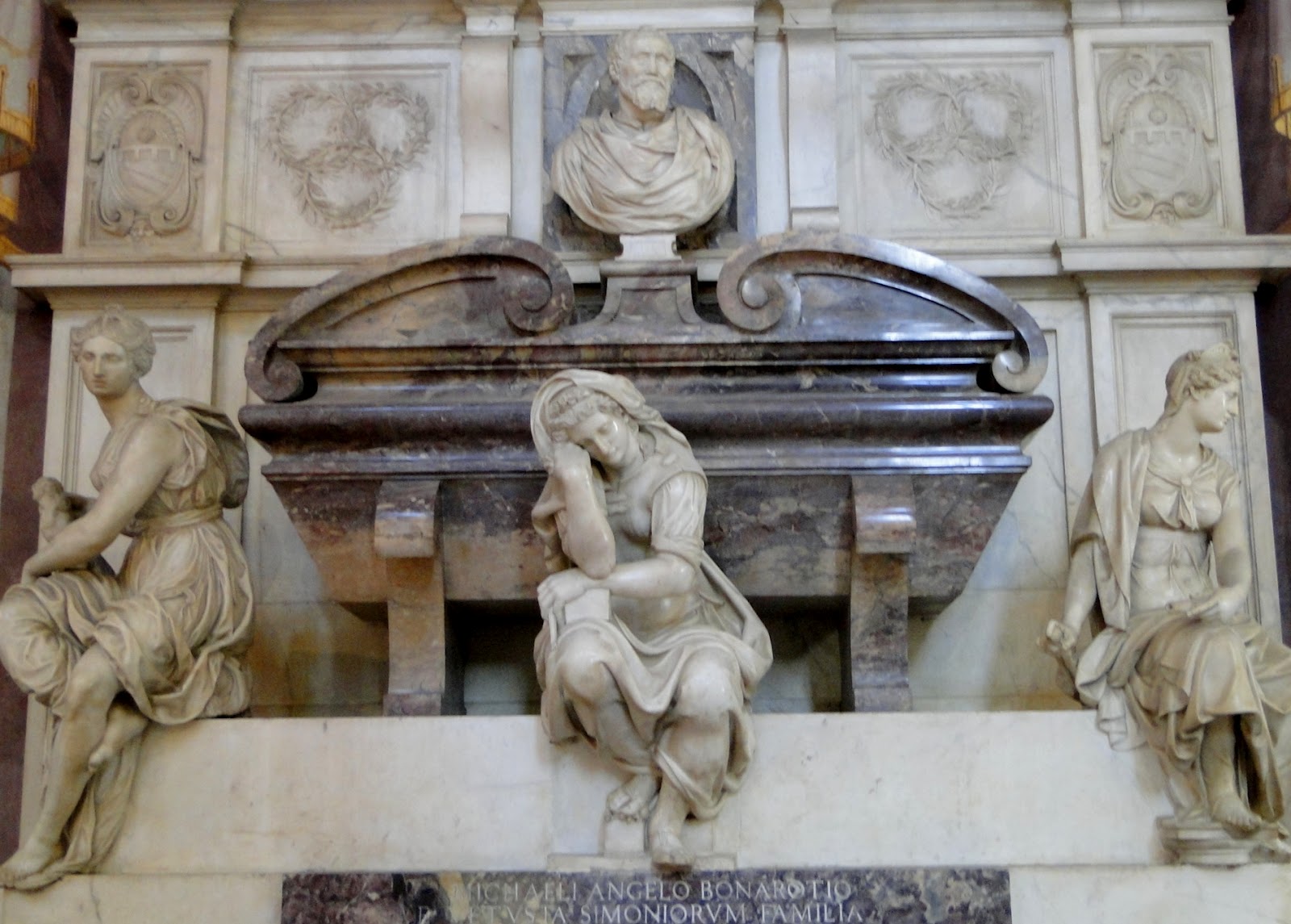 (I had to do a research paper on him in high school so I thought this was neat!) 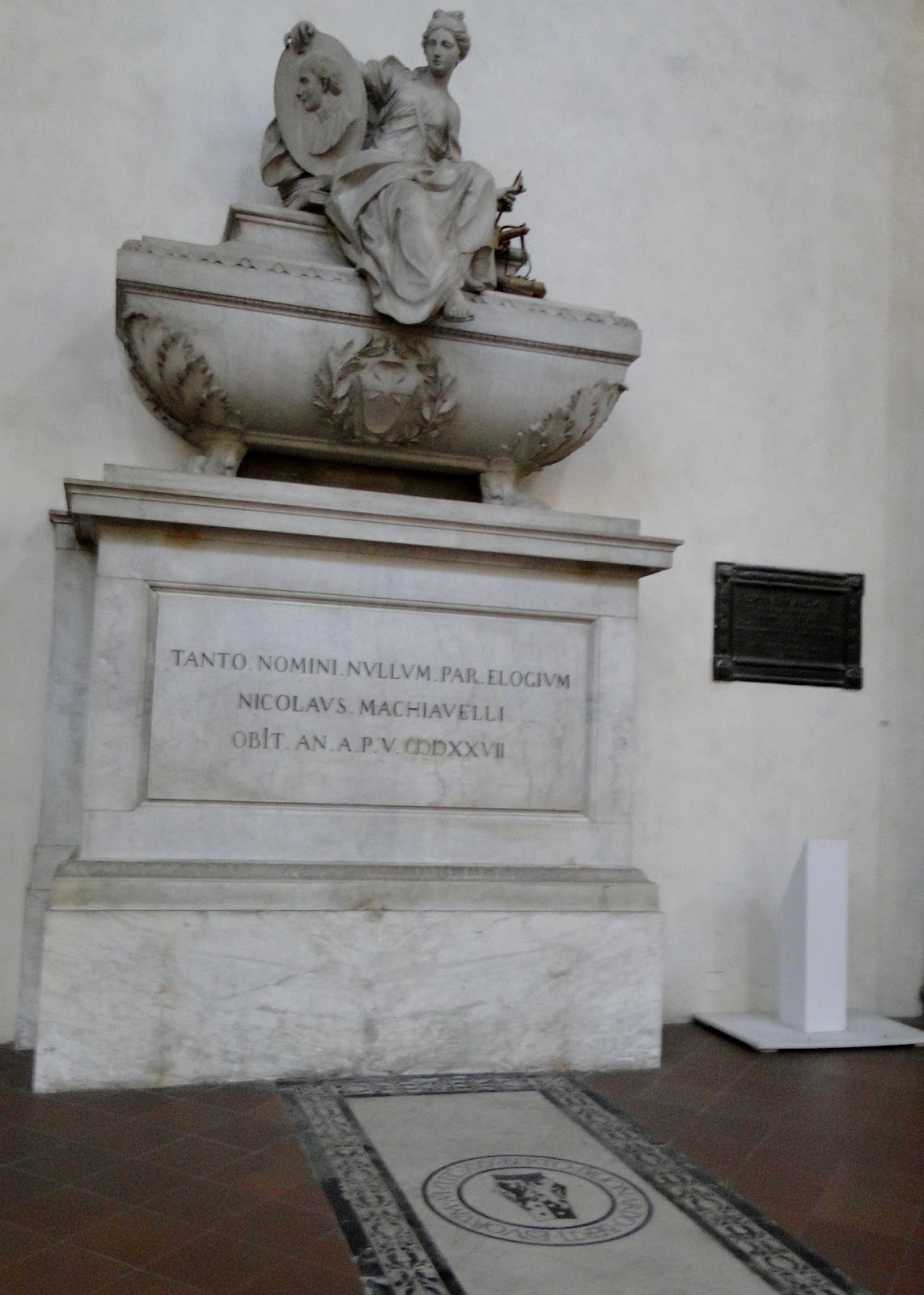 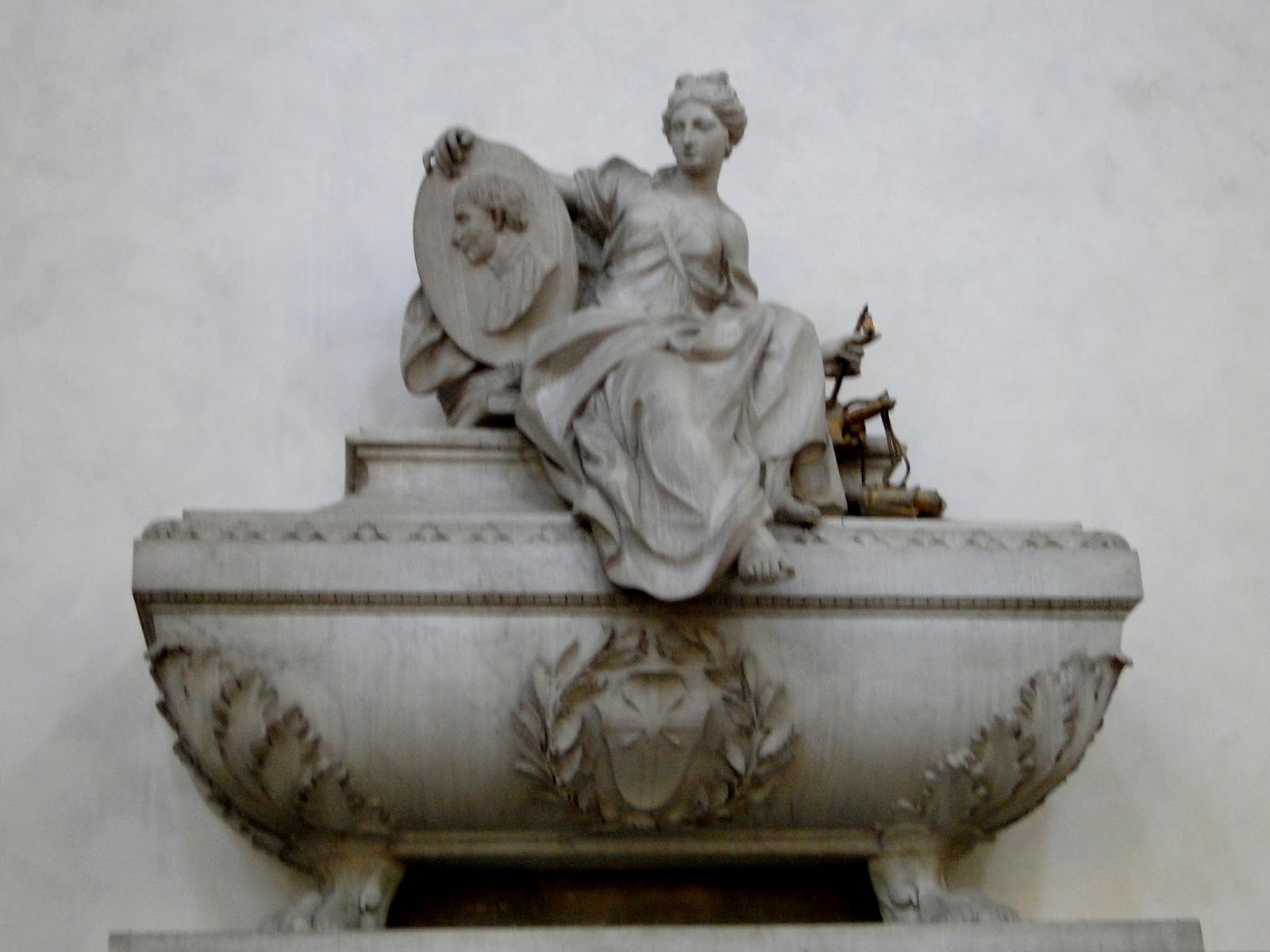 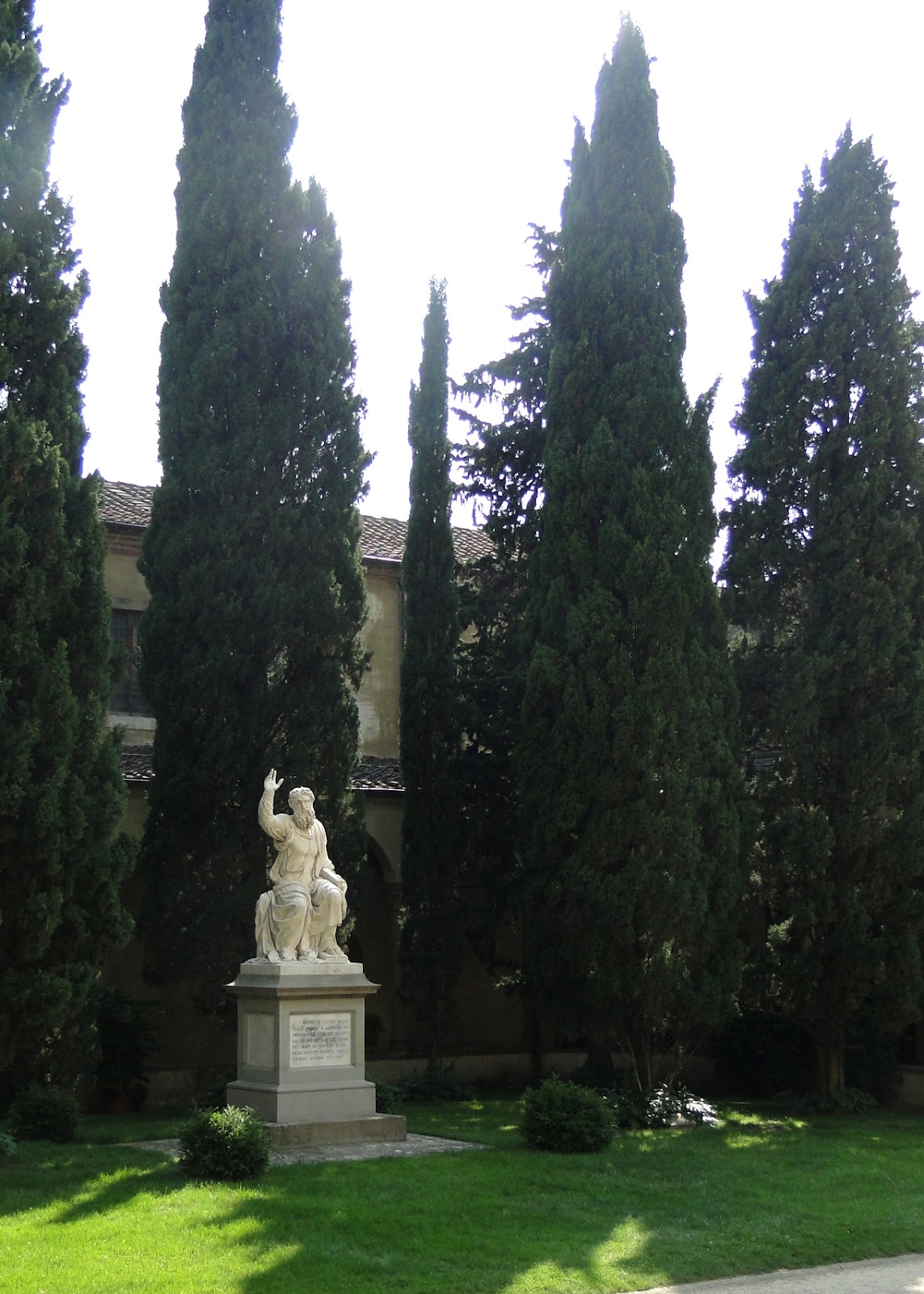 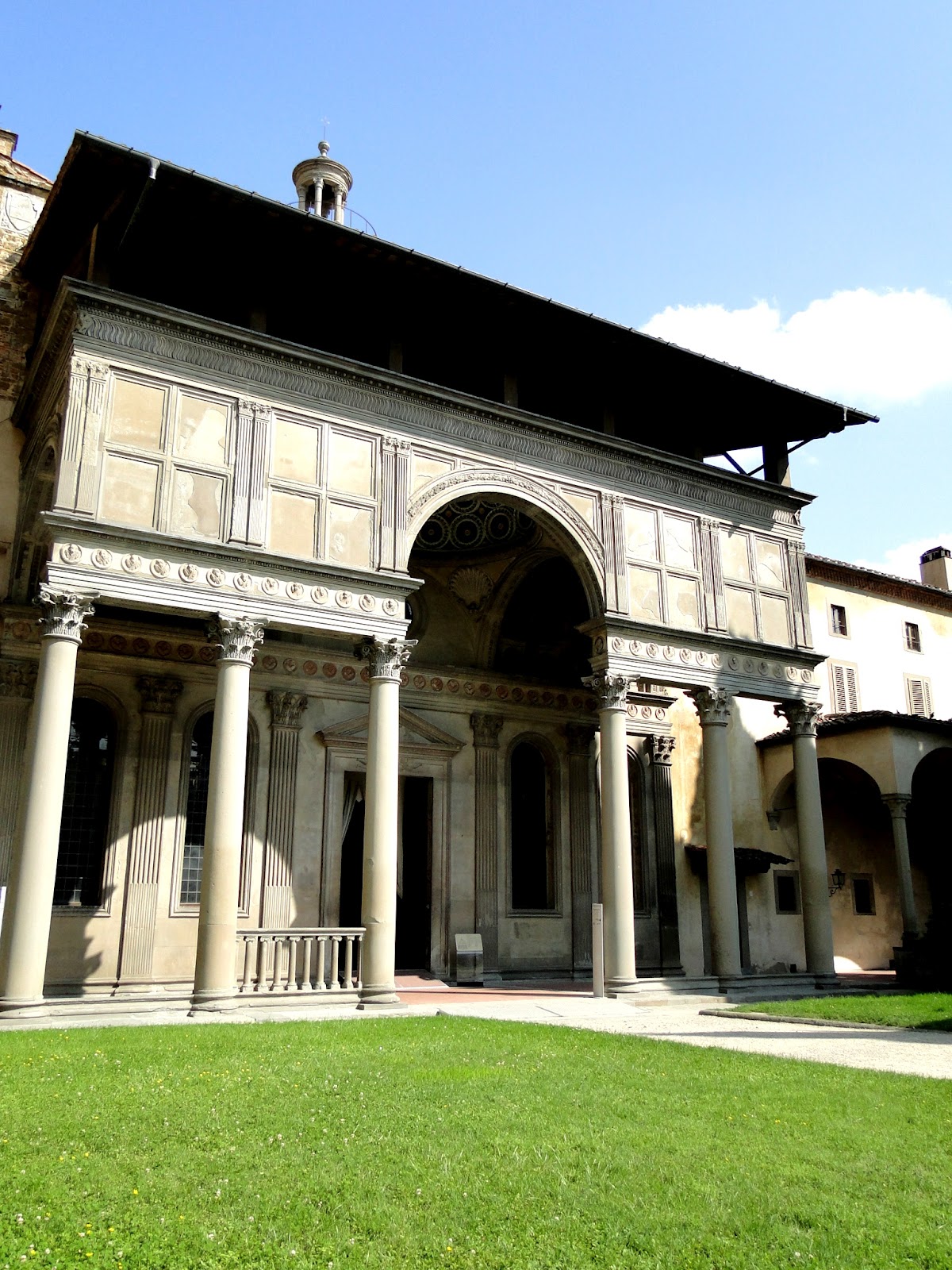 This was my view most of our trip…following Zach and that massive book bag! 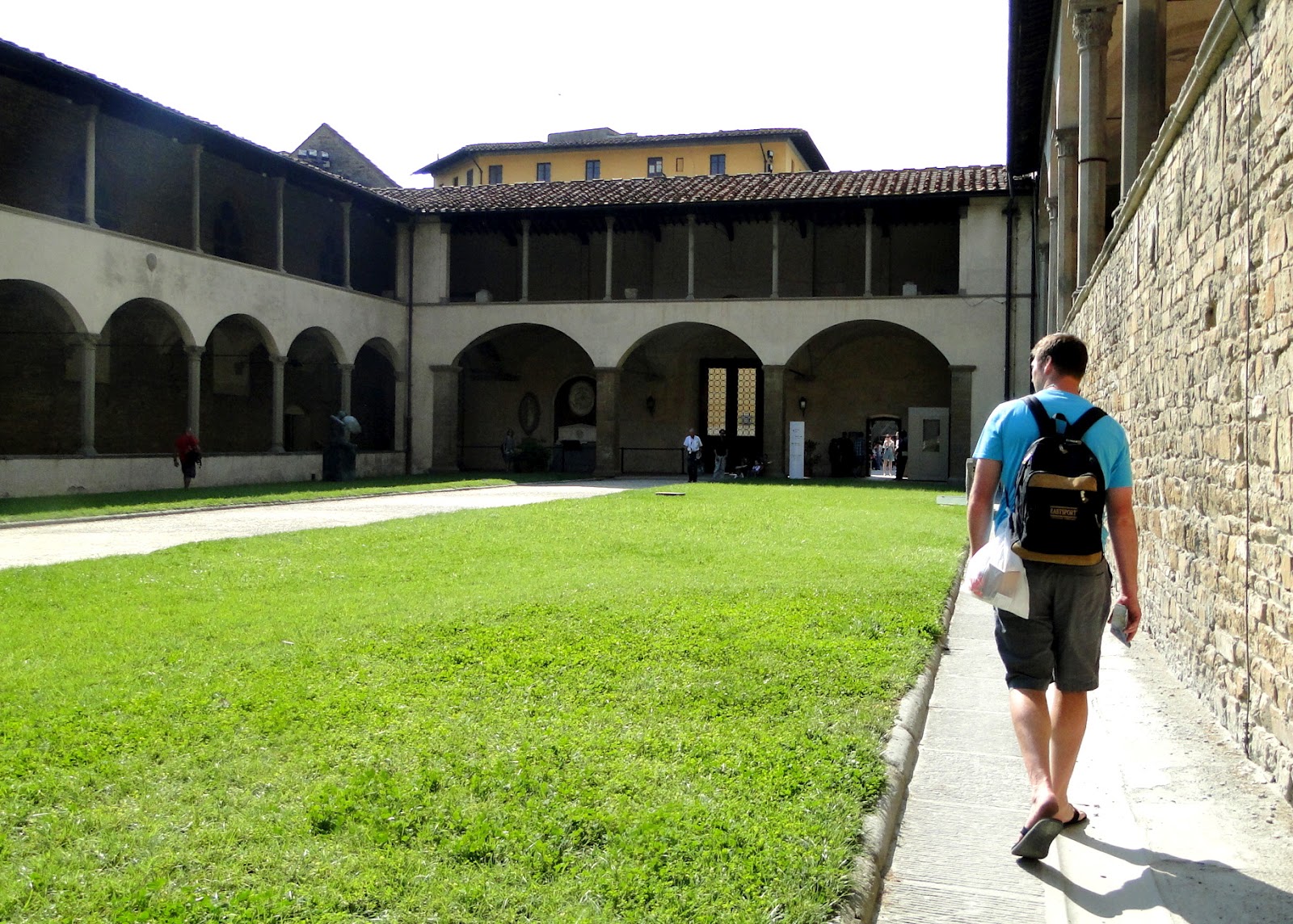 Once we finished up at the church it was crunch time for some dinner. We knew we had to eat early as we had to catch a 6:00 train back to Rome and I’d need to pump before then as well. So far on the trip we hadn’t run into many issues with the whole siesta thing. I may have mentioned this before, but in Italy people take a siesta from 2 or 3 until 7 or 7:30. Businesses, restaurants, etc will all often be closed during this time. Locals are used to this and will eat dinner after 7:30. Our bodies had adjusted, as we are used to eating on schedule with the kids at 6 every single night, but many times we had no issues finding places open during our typical “dinner time.” Of course the ONE day that it was essential for us to eat early we couldn’t find a single restaurant that was open.

We first tried to eat at places our Frommer’s book recommended for steak but had no luck with any of them. As time ticked away we decided to just walk towards the train station so wherever we ate would be closer to where we needed to be since we were taking so long to find somewhere. We must have looked in 20 restaurants. A couple of times the doors to the place would be open but they would be EMPTY inside. I mean Italians are some trusting folks…I couldn’t believe they would just leave their doors unlocked like that!!! 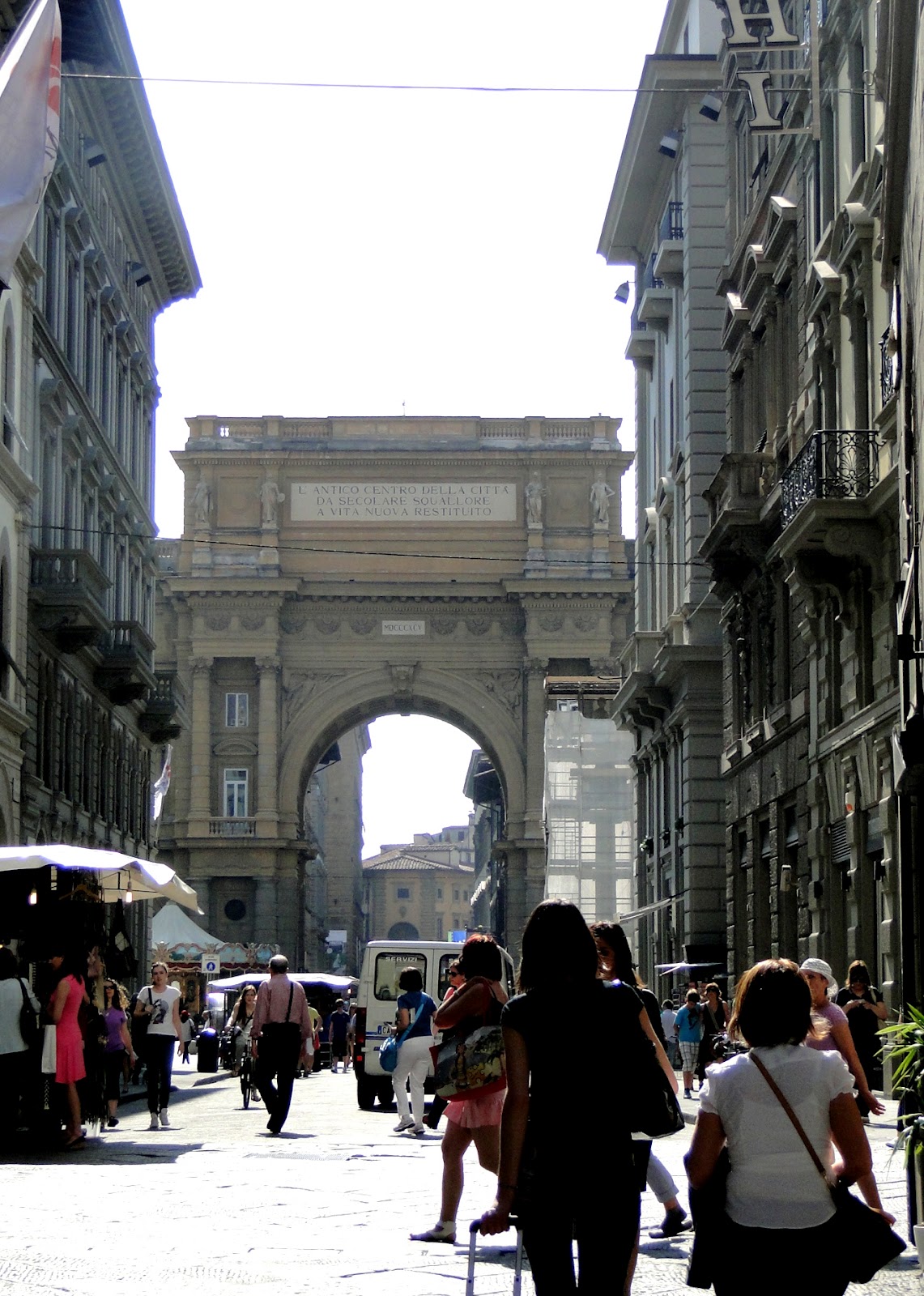 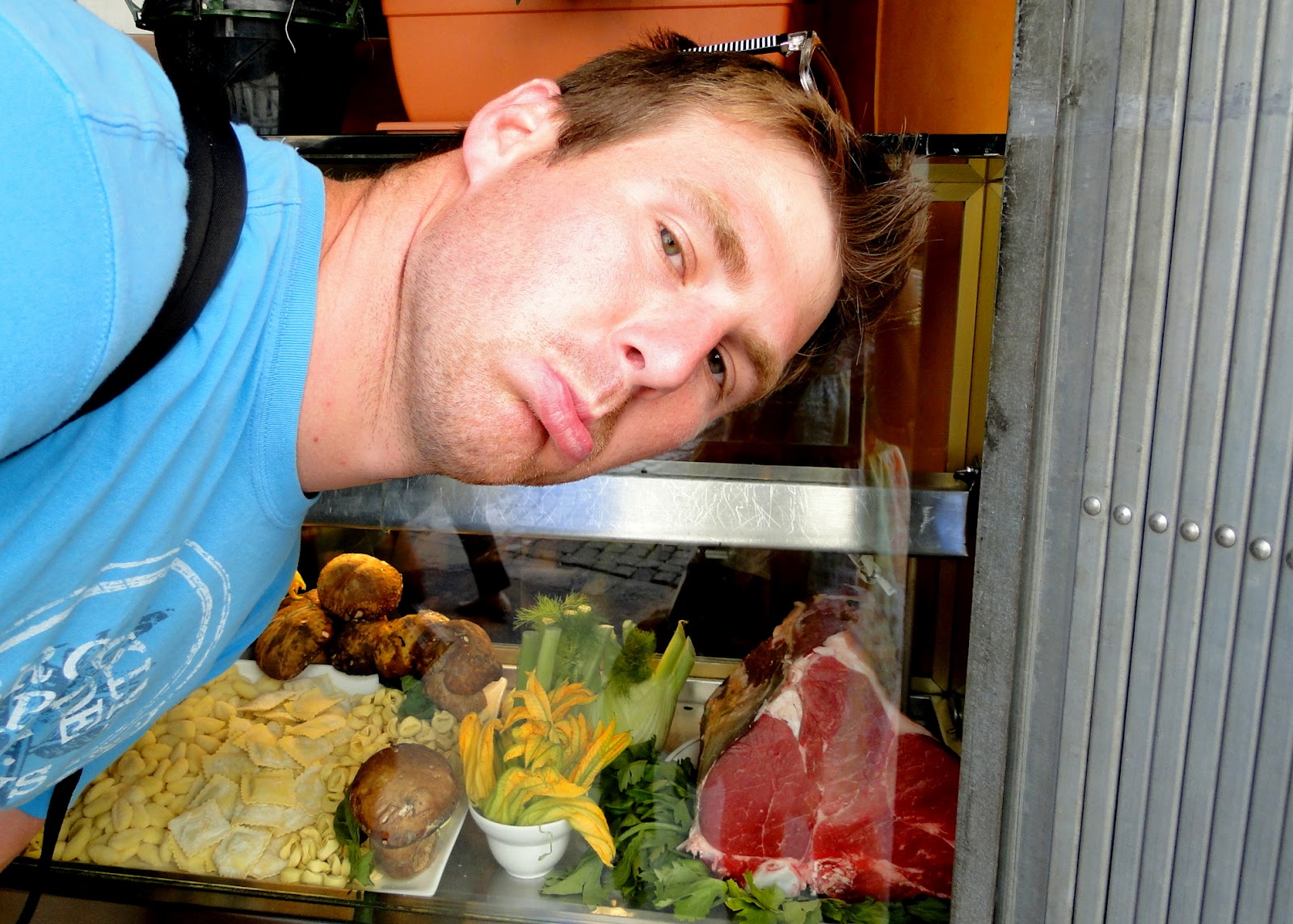 We got to the train station and still hadn’t found somewhere that was open. We went into a little cafe (where you can grab quick bites, but not full meals like we were wanting) and asked a girl who worked there if she knew of anywhere that was open for dinner during this time. It’s so interesting to me that it was 5:00 yet nowhere was serving dinner! Differences in culture right?!?! She suggested a place and it too, was closed. We decided to try ONE more street then just grab something from a cafe and call it quits. We got lucky!!! A place happened to be open for dinner! We were the only customers but we didn’t mind 🙂 AND they had the steak Zach had wanted to try!!!

A Florentine Steak is a T-Bone grilled over wood or charcoal and seasoned with salt or sometimes pepper then dashed with some olive oil at the end. It’s also MASSIVE. We had to pay for this sucker by the weight…I can’t remember how much it weighed. If Zach remembers I’ll come back and add it 🙂 It was mega huge though. And he loved it (thank God b/c it wasn’t cheap!). It ended up being one of our most expensive meals (48 Euros) but I really wanted him to get to try this famous steak so I was totally fine with it 🙂 I’m just glad we found a place!!! 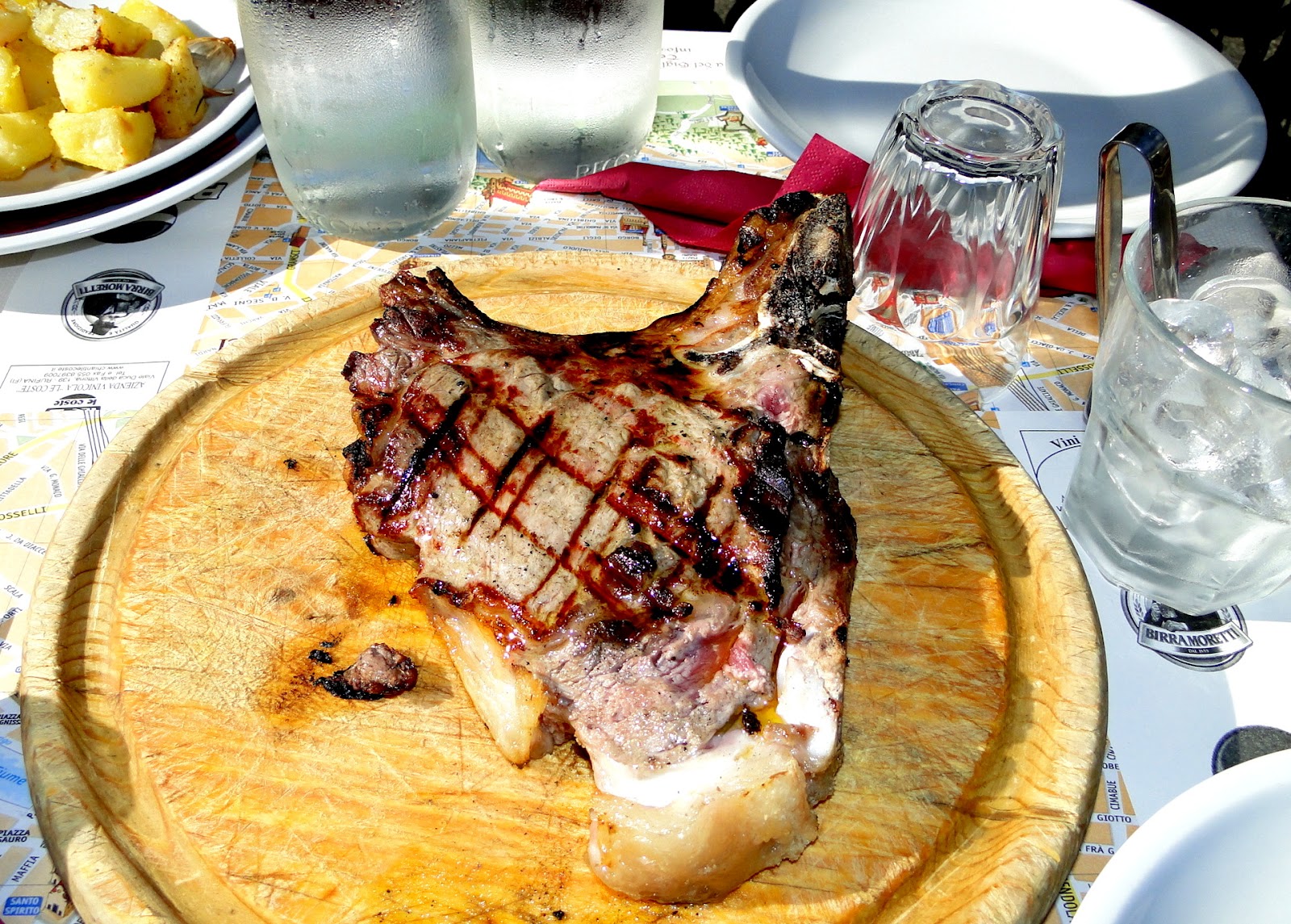 Steak bigger than your head! 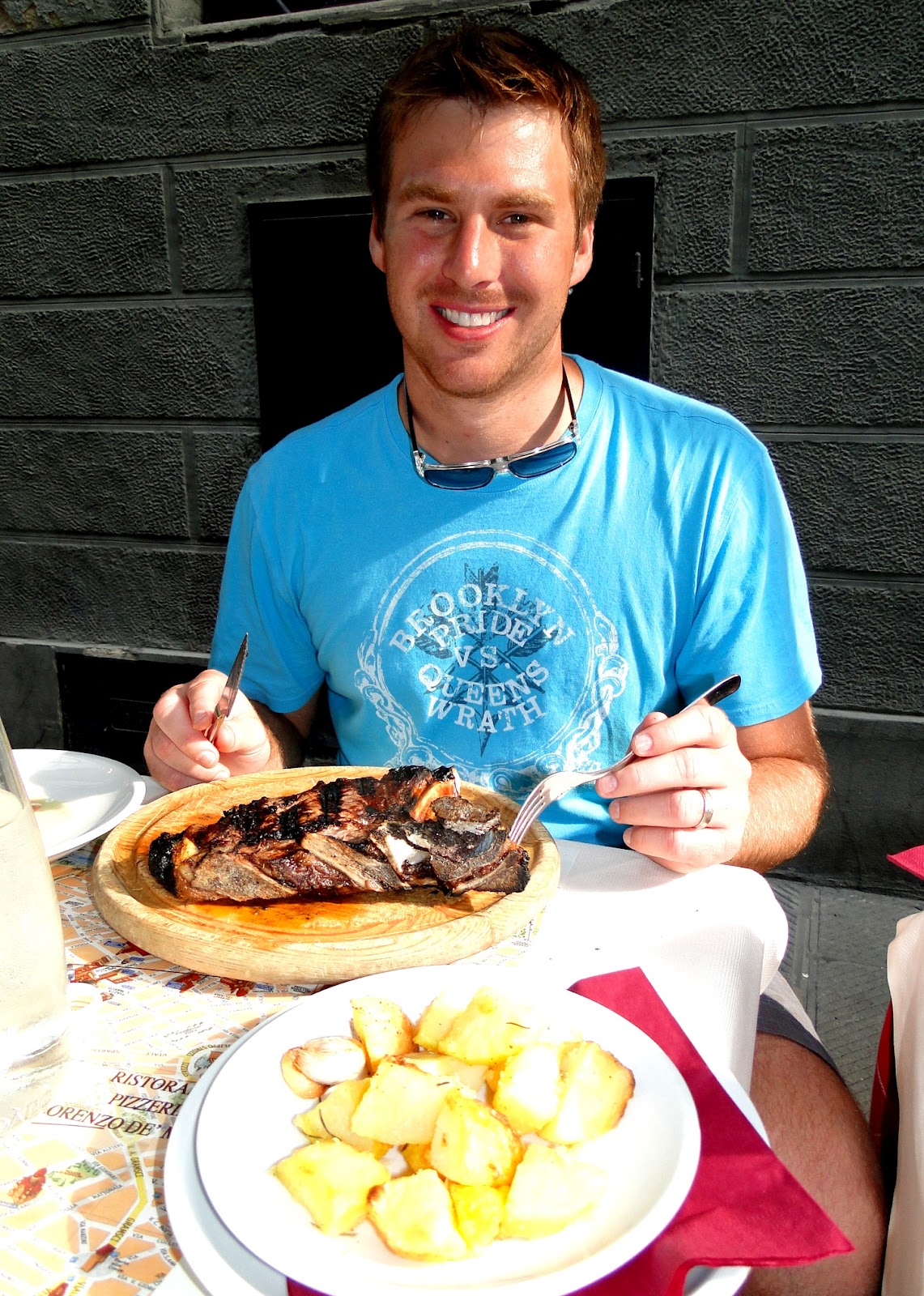 I had white pizza. And it ROCKED…the lighting is all funky though so you can’t really see it. It had big chunks of all different types of cheeses. I also ate a good bit of Zach’s potatoes. Italy is one of the world’s largest producers of olive oil and oh my goodness it’s SO GOOD. It makes all the food it’s on delicious. I loved every kinda of potato we ordered 🙂 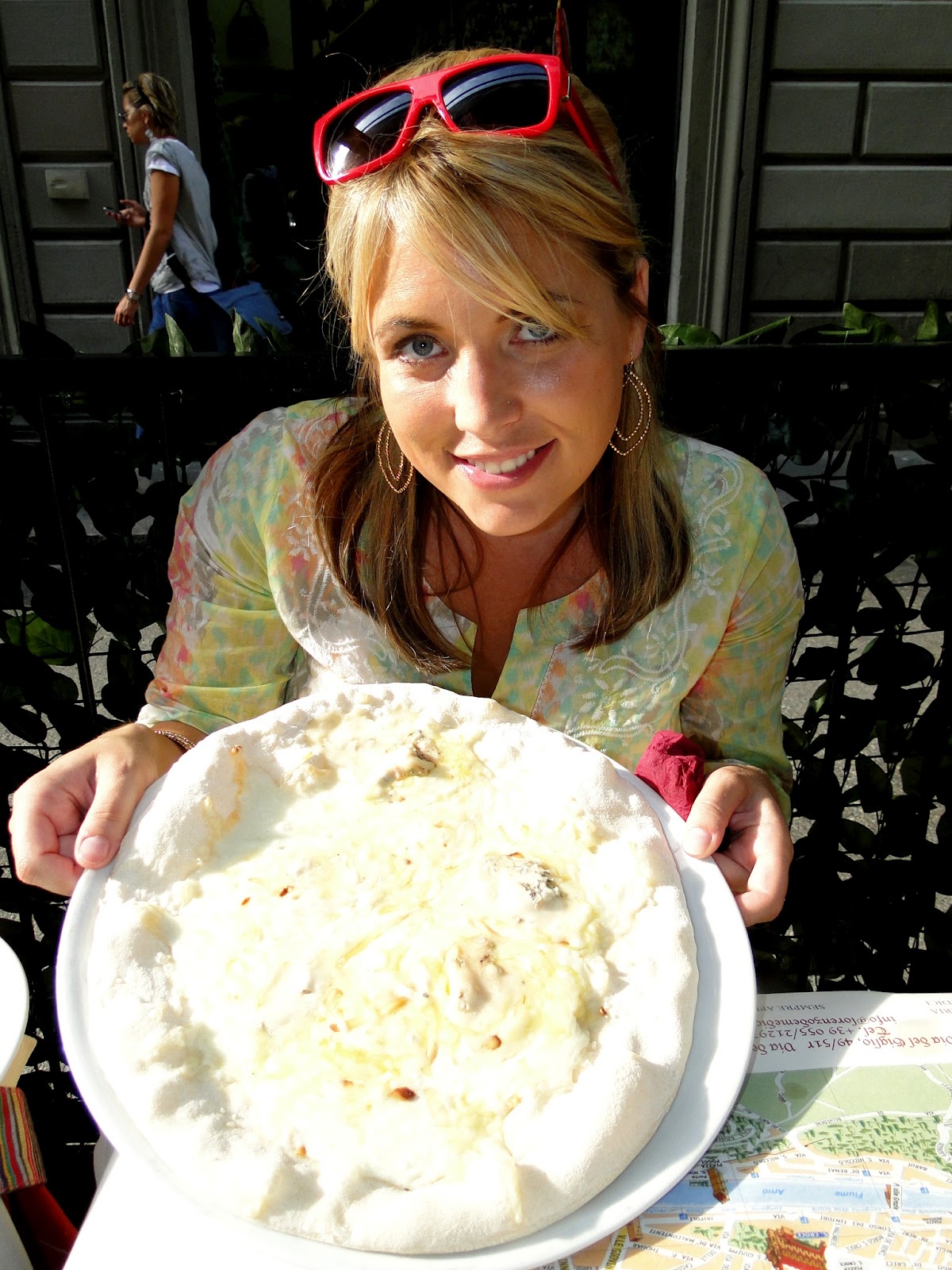 We were disappointed with the service of the restaurant. It worked out well that we could eat and even better that I could pump there comfortably, but our waitress was rude and straight up forgot to put in my pizza order. We had to wait forever! She did not get a tip. It was nice that it was an option there…as here I would NEVER not tip. Waiters and waitresses aren’t paid minimum wage so they need that money!!! Over there, they make more and places charge a service fee up front so there isn’t that pressure to tip. I went across the street and looked in some shops while Zach paid the bill.

After dinner we looked at some little souvenir booths. Casey told us Florence was the best places to buy souvenirs. We seriously had NO LUCK anywhere with that. It’s a country that makes a lot of money from tourism yet doesn’t really take advantage of it as much as they could. Most of the big attractions didn’t have gift shops at all and if they did they didn’t sell much in them. Even street vendors weren’t selling tons of things like they would over here. I mean if the Colosseum was in Atlanta you know they would have a blue screen set up before the entrance and would make you take a picture in front of it then make it look like you’re fighting a battle as a gladiator or something and charge $20 for it. Then you’d leave and be forced into a HUGE gift shop where you could buy everything from towels, to t-shirts, to soap to food products with an image of the Colosseum on it. Italy needs some marketing help haha. It just wasn’t like that there!!! While it was nice not to be bombarded with a bunch of touristy crap, I was a TOURIST and I wanted to buy some of said crap!!! I actually got frustrated by the whole situation. I promised Kye a prize and ended up getting him a Pinocchio. It was the only thing we could find. We also bought him and Britt both a t-shirt outside of the train station but that was it. I gave him my McDonald’s toy as a prize and we ended up buying him some Italian chocolate at the air port. Poor Britt only had the t-shirt and she and Kye shared the Pinocchio book we bought on our first day in Florence. For us we found ONE ornament and it was at Pisa. We ended up buying a Pinocchio too b/c we can rig it up to hang on the tree and it had a little Italian flag on it. Other than that we bought the sunglasses and like 4 books (one on Michelangelo, the Colosseum, Florence and St Peters). Zach enjoys that kind of thing and they did come in handy for these blog posts. But that’s IT. I mean 7 DAYS in Italy and that’s all we bought! Kinda lame!!!

We had to wait a bit at the train station as our train was a little late. It made up for the time though! It was a SUPER SPEED train!!! The drive from Rome to Florence took 3 hours. This beast made it back to Rome in under 2. Pretty awesome 🙂 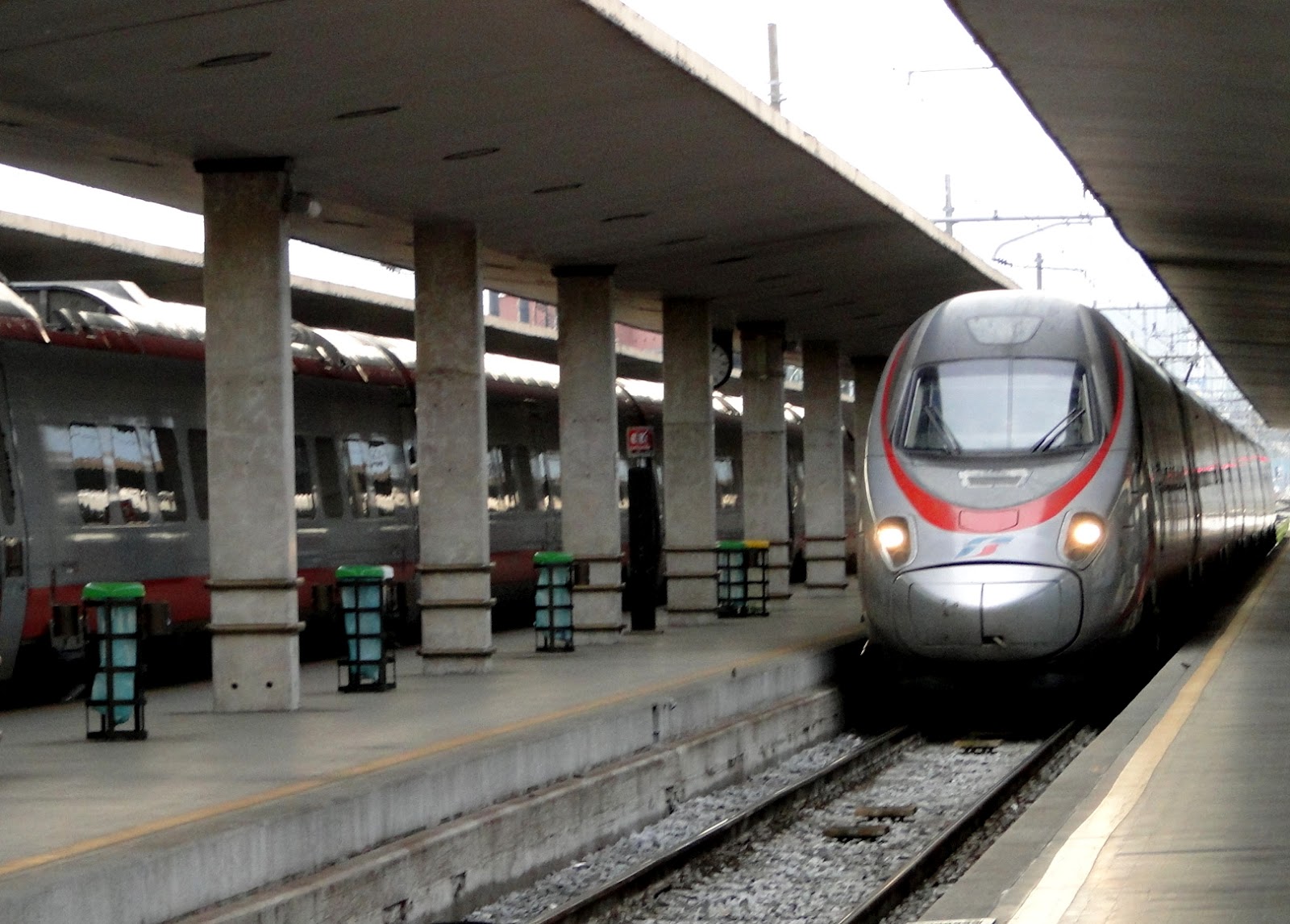 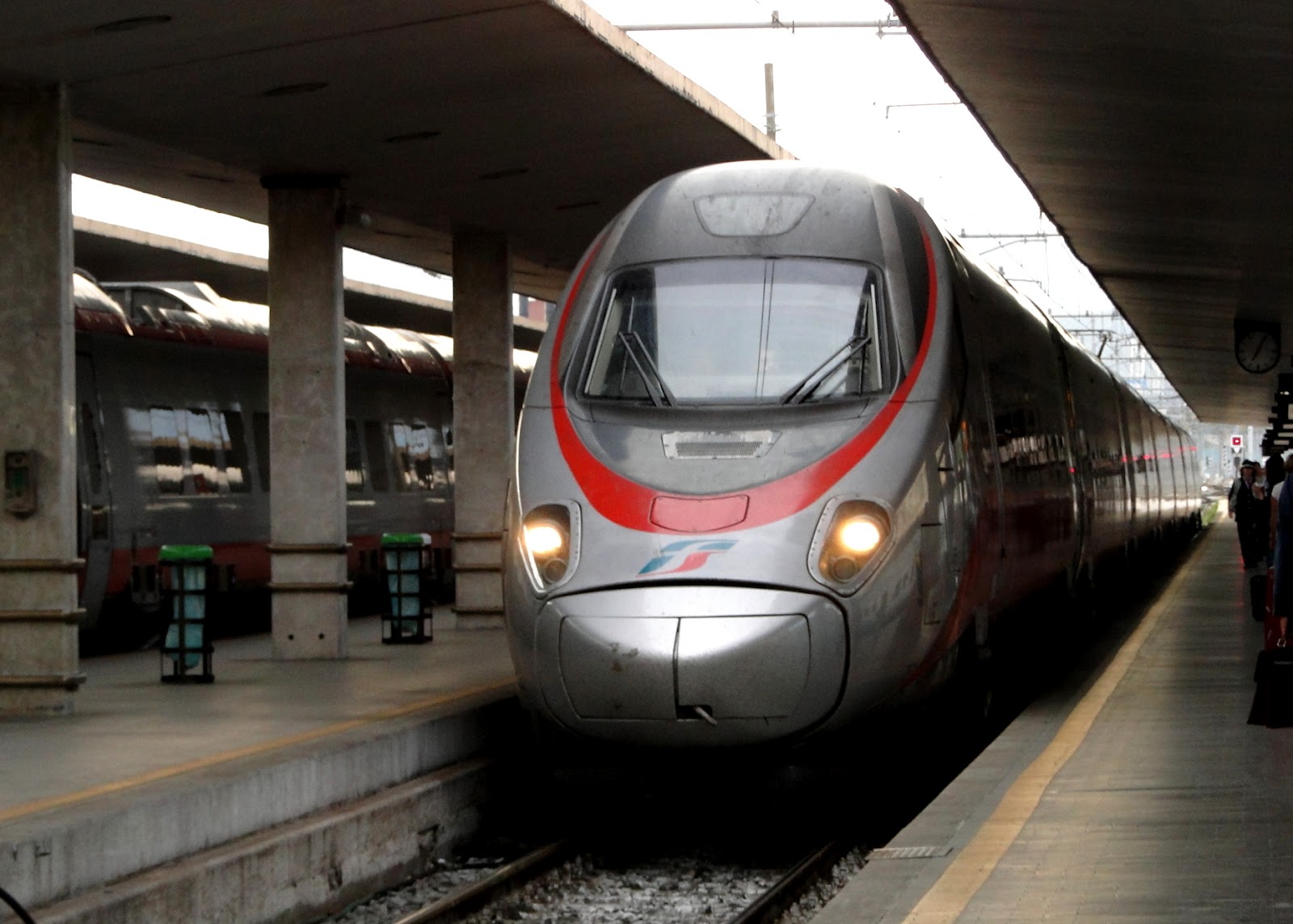 When we got on it was very much like airport seating except that you faced each other with a table between. Why don’t they do that for airplanes? I would have napped but there was a group of 6 middle aged Americans practically YELLING they were talking so loud. People like them are the reason other countries assume we are all loud and rude. They were both. I can tell you their entire life story and all about one guys successes and failures in classical music bands. Super interesting…it was so bad that Zach got out some ear plugs for both of us and we could STILL hear them. Beside hearing them, our view wasn’t too great either. Two Korean girls were sitting beside me but across the aisle (Zach was across from me so he was kinda facing them) and they had some kinda of magical food book bag that just kept making more and more food appear. Zach said it all smelled horrible. While I can’t smell, I can see and having to see them eat it was disgusting. They had this container FILLED with whole cherry tomatoes and were eating them whole. Like three or four at a time. And the juice was squirting out down their chins. I am scarred for life and will never look at a tomato the same again. I’m gagging writing this. They ate the entire container and an entire loaf of bread with some strange sauce they were dipping it in, and drank some thick milkshake yogurt looking stuff. And they were super messy about it and didn’t wipe their mouths until the end. Gag gag gag, You can tell it was one of those things that was so gross I wanted to look away but for some reason I couldn’t. I just kept on watching haha. 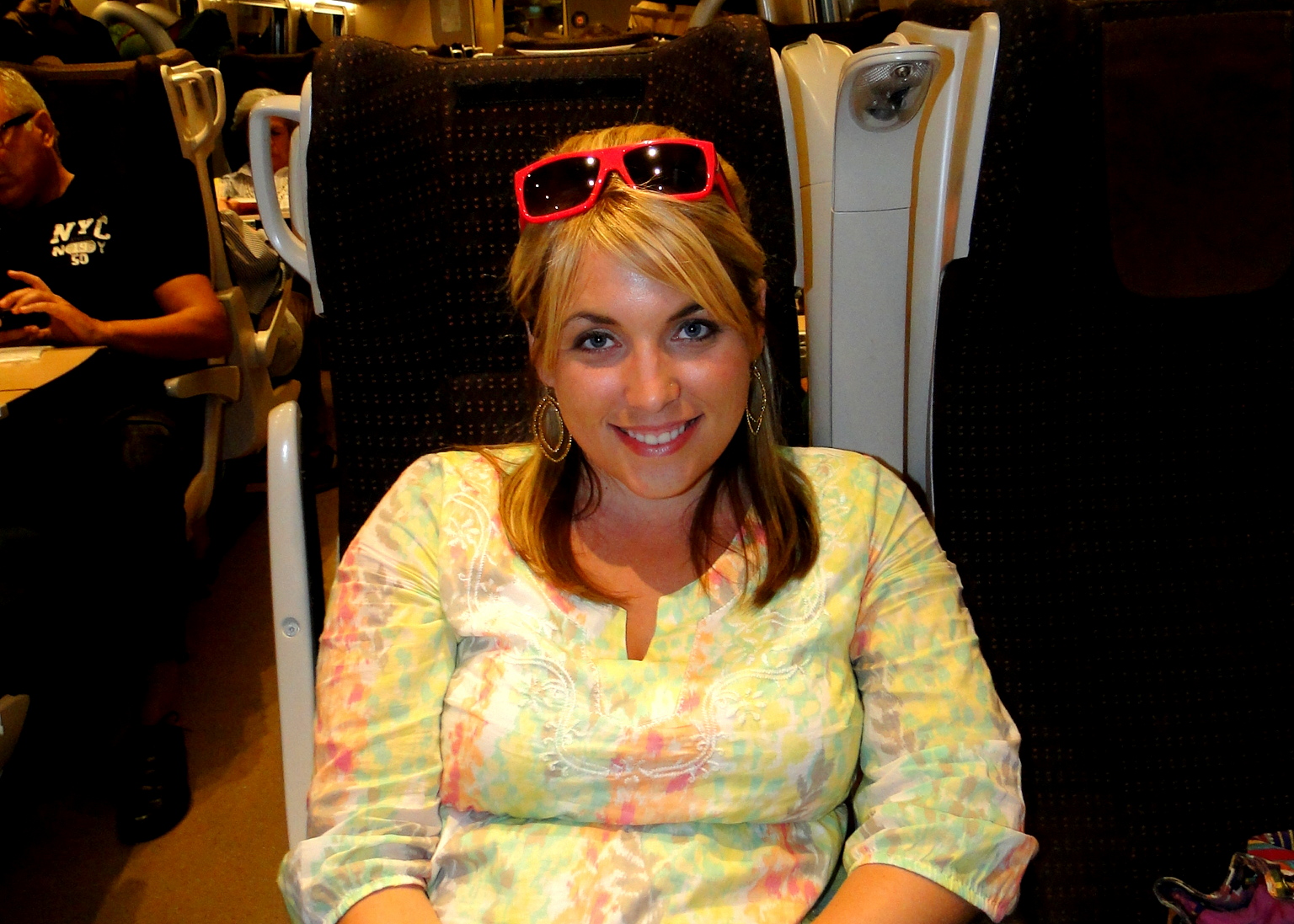 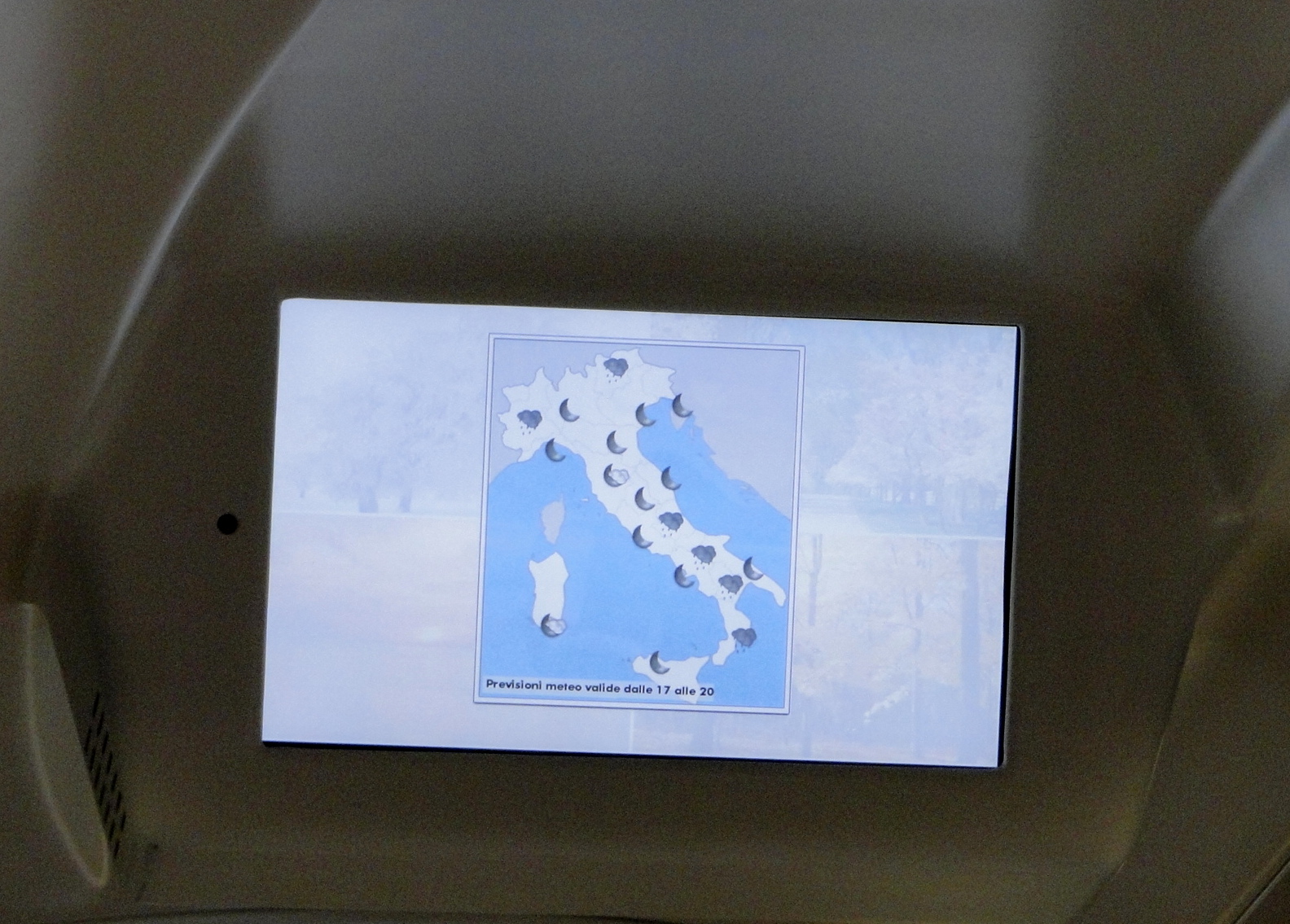 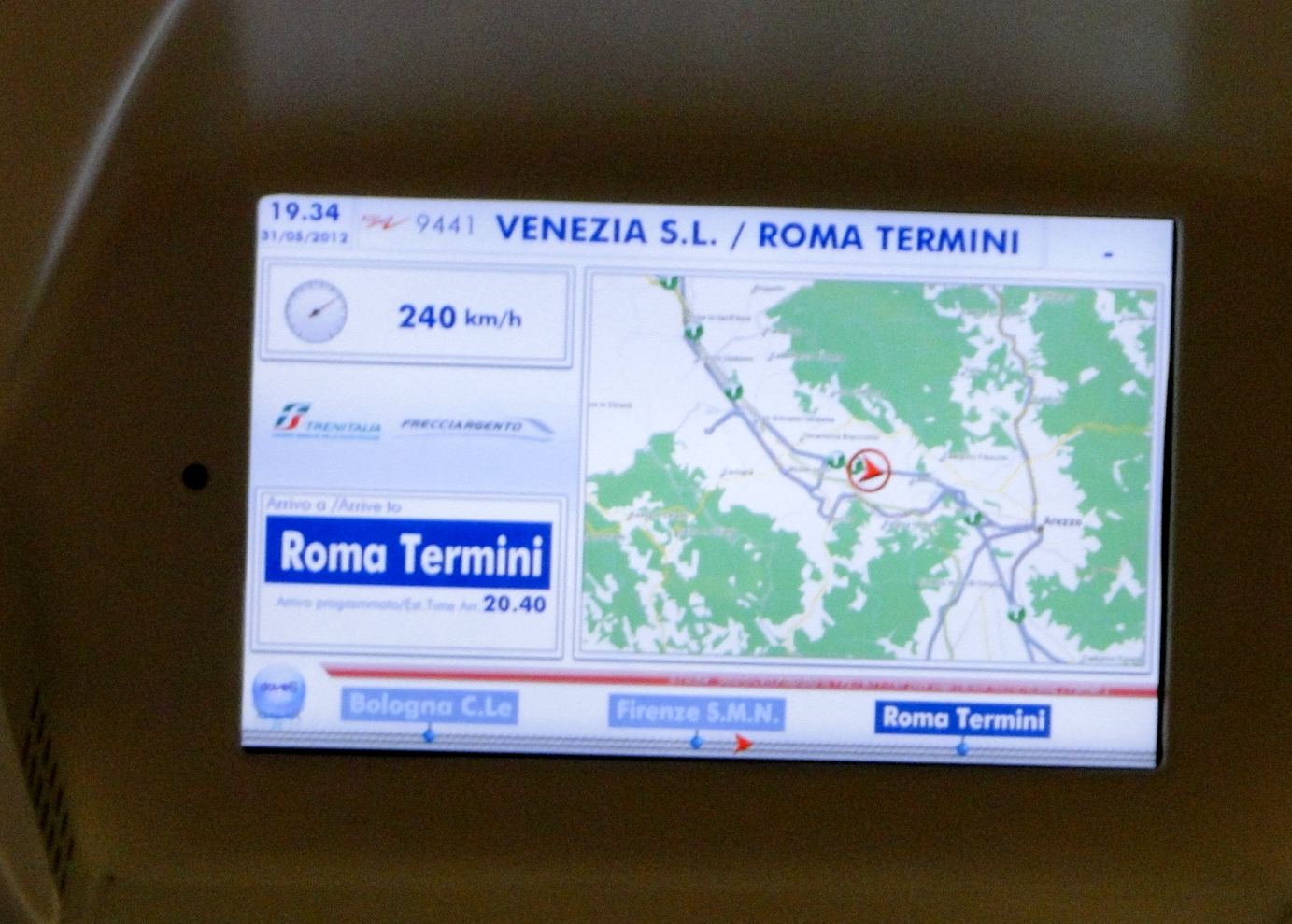 We got back super quick and felt pretty well rested! We headed back to the room, called the kids and finished watching Angels and Demons for our big tour the next morning!