After finishing up breastfeeding Zach went out to get everyone. Originally we had planned on only have our immediate family in the room then having the rest of the people come in after we announced the news to our closest family. Well Zach peaked out and told me who all was out there and we just decided to let them all come in at once especially since we were (again!) fighting the clock!

Everyone who came in the room included: Mom, Brandon, Chrissy, Charlotte, Rusty, Courtney, Casey, Mema, Ashley, Katie, and Aunt Karen. They all gathered around and I held the baby. Once everyone was in the room I announced that we had a little boy! I think everyone was pretty shocked! Then Zach told them the name 🙂 Zach also told them that he was 27 inches long hahaha you can tell Zach is hoping he’ll be tall haha!

This is right before we told them the BIG news… 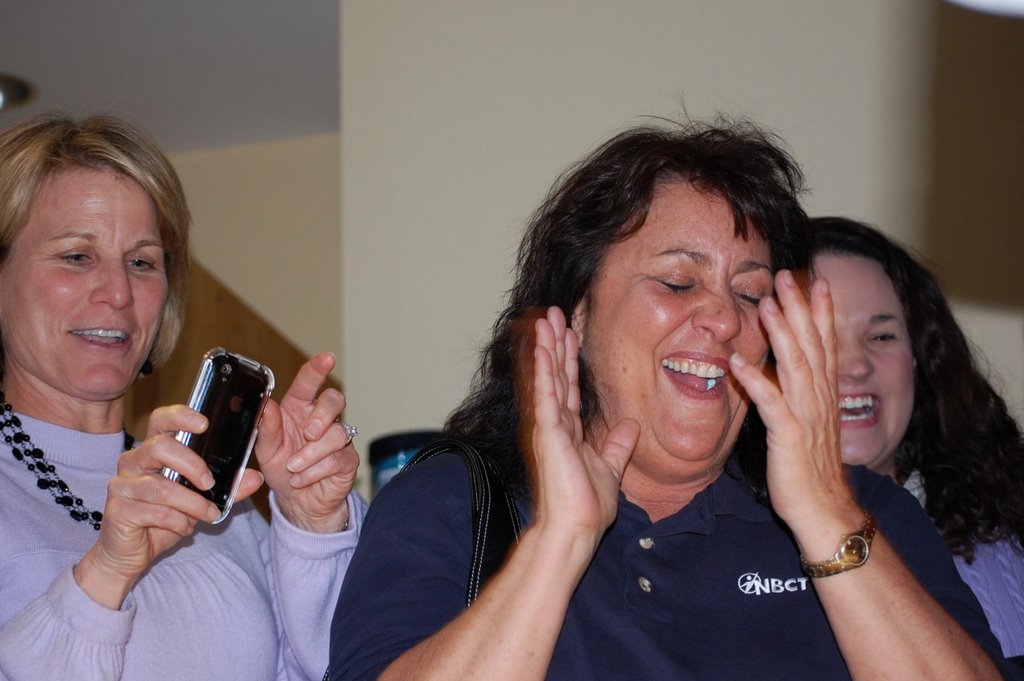 It was so neat to look at Mom and how thrilled she was to be a grandma! I also remember how sweet Mr. Rusty was to me. Looking at the pictures he was always kinda touching me in some way and looking at me like he was proud of me. Other little moments I remember that were special: Ashley bawling her eyes out (so precious), Katie being Katie and letting everyone else hug me first because she didn’t want to take away from someone elses time, being surprised that Casey was there (I heard she was still stuck on her way), Mr. Rusty and Zach high fiving when I said it’s a boy, me telling Chrissy right away that “it wasn’t that bad” (she’s a little nervous about having a baby someday) and My brother hugging me and looking so lovingly at his nephew. 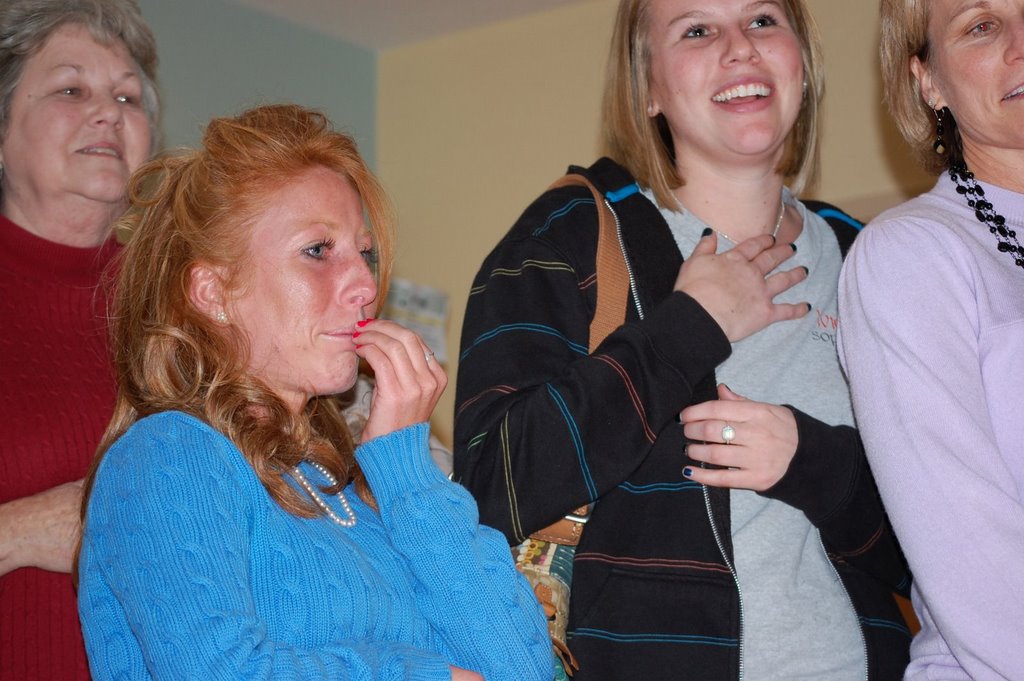 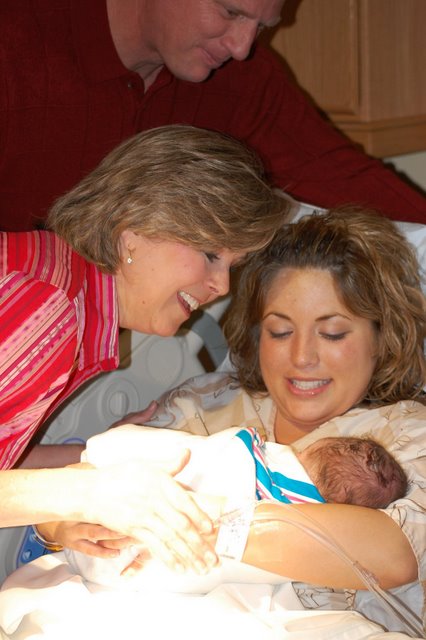 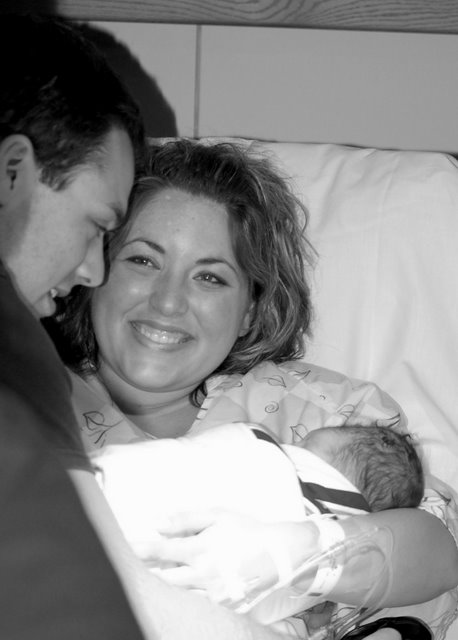 Everyone was very proud of me and said how cute Kye was (even with the cone head). I’m not “one of those moms” who thinks her child is beautiful but I was surprised how cute he was for a newborn! No Stevie (she was the prettiest new born I’ve ever seen) but still pretty dang cute! Some people even said how awesome I looked! Ashley still can’t believe that I didn’t freshen up! I guess they were all in the waiting room getting very nervous since they knew how long I’d been pushing and they were so so worried I’d have to have a c-section.

It is amazing to me (as it was to everyone else) that I was so alert. I felt awesome! Very energetic and alive. More than one person commented on how happy and content I seemed and that it must be due to the natural childbirth!

Once everyone left and Kye went to the nursery I called Dad and told him the news. He was thrilled to have his first grandson and said he was “very impressed” that I did it all natural! He didn’t quite catch on that we are calling him Kye and not Candler though 🙂 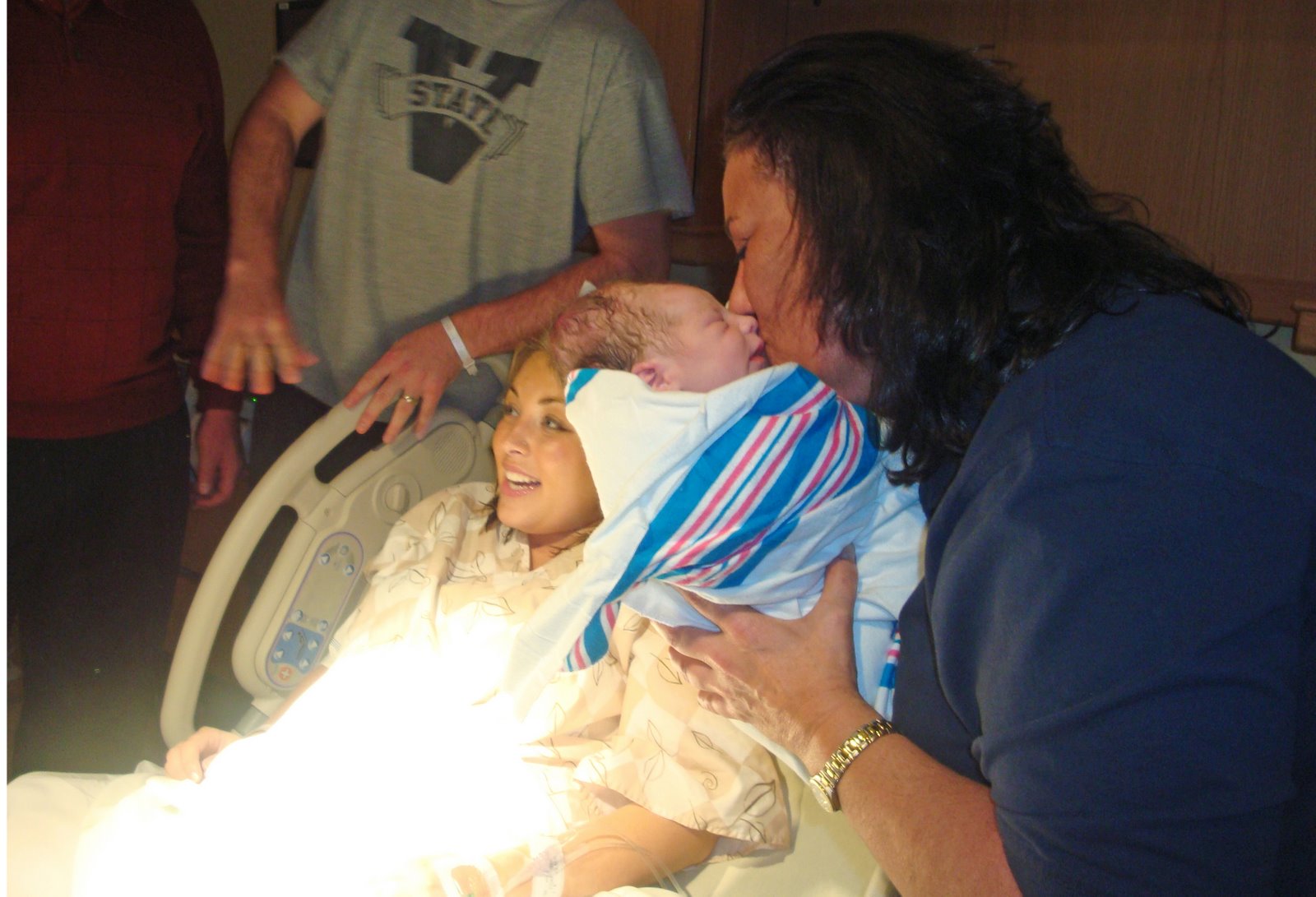 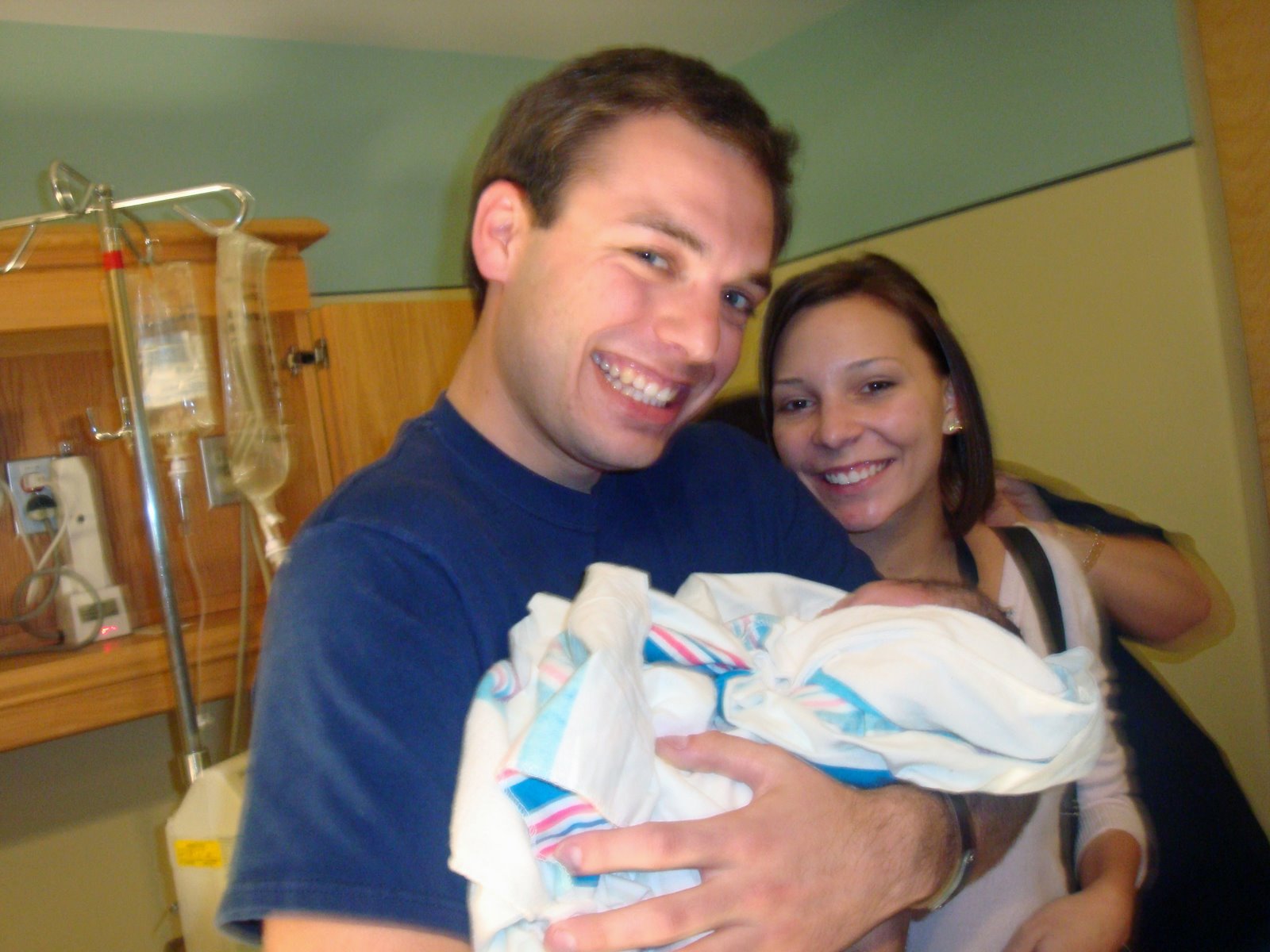 I love the name we chose for him and I hope everyone else does too (I hope, but if not I don’t care…it’s his name deal with it)! Here is the story behind the name:

Zach and I were eating at Smokey Bones (our favorite restaurant) in Banner Elk, NC on our yearly ski trip over 2 years ago and started talking about baby names. We actually came up with the majority of our names that night and wrote them down and Zach kept it in his wallet! Candler Ky was already decided as our little boys name waaaaayyy back then 🙂 This is the actual picture from that time, taken in Dec 2006! 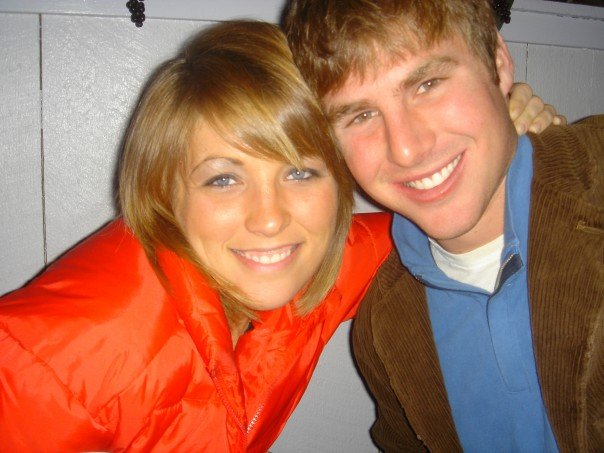 Several years ago Zach and I were at the Country Club pool and we met two adorable little kids. Zach played with the little boy and I played with the girl. They ended up asking their mom if we could babysit for them sometime and it was the beginning of some of the happiest times I’ve had living in Valdosta! Madeline and Candler became “my kids.” I loved them (still do love them too!) like my own children. I would pick them up after school every day and keep them some nights and weekends. I had always felt very lonely in Valdosta because everyone living here was “Zach’s” in some way. Either his family, people who had known him forever, his friends, etc. I didn’t really have MY people. People who said “Emily and Zach” when they talked about us instead of “Zach and Emily.” The Murphey family became my people and I loved every second I got to spend with those children!

Candler and I got to spend lots of time together because Madeline was very involved with activities. He was also such a precious age (5-7) and he’s so cute! Plus I always thought the name Candler was so cool and different (once I FINALLY quit saying “Chandler” haha). Both of “the kids” were in our wedding. Candler as the ring bearer and Madeline as the adorable junior bridesmaid. After the wedding they left to move to Athens and I’ve only gotten to see them one time since. I know they will grow up and probably never really think of me but those kids had such a huge impact on my life. They let me know that I will make a good mommy and they made me want to have children. I loved them so much I couldn’t imagine how much I’d love my own! I miss them very very much and am so glad to have my own little Candler now 🙂 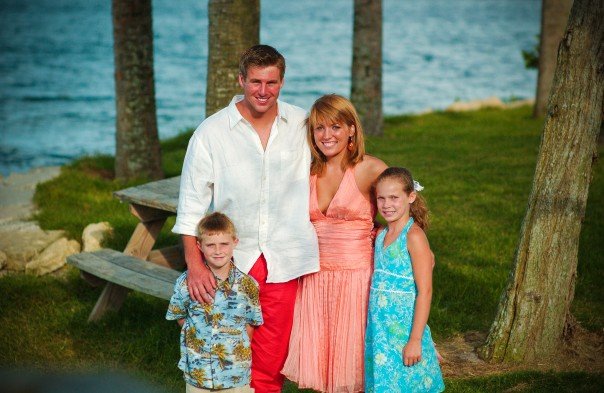 A couple days after we got home from the hospital I called the Murphey’s to tell them the news. Mrs. Murphey cried when I told her we named our son after her son! Candler wasn’t home so once he got back they called me back and I told him we had the baby and it was a boy. I asked if he wanted to know what we named him and he said yes. I told him Candler Kye and asked him if it was okay if our baby shared his name. He said, “yes ma’am, thank you.” So precious. Mrs. Murphey called me back later and left me a message saying that when they were eating Candler stopped and said, “Mama it’s so cool they named him after me.” Then a little while later he stopped again and said, “Wow Mama it’s just so cool.” Isn’t that adorable? 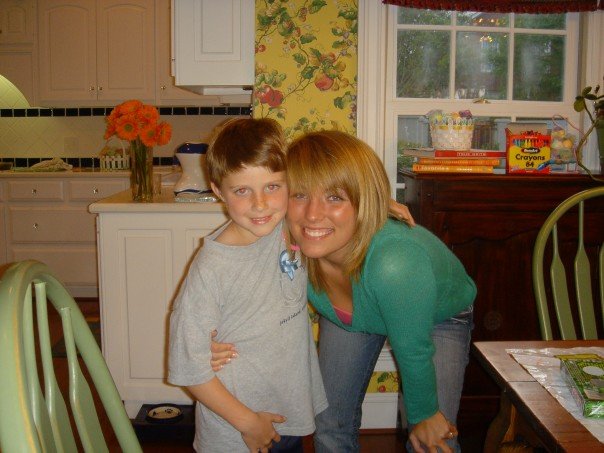 I had a huge crush on this guy (Ky Shepphard) my freshman year in high school. I thought he had a really cool name even though he ended up being a drug dealer. I never planned on it being one of my baby names though until I got with Zach.

Zach already had his baby names picked out (but what girl would seriously use any of the names he picked..I mean you’d assume he came up with them with his ex right?) and one of them was Braxton Ky. His first choice for a boy was Zeke, but I took care of that by naming our cat Zeke! I told him Braxton got the veto due to Braxton Hicks contractions (who wants to remember those forever?). But I liked the idea of Ky. But neither of us wanted to spell is KY (duh…KY JELLY).

We knew we’d name our son Candler Ky but didn’t know how to spell Ky. We also knew he’d go by Ky. I love the name Candler but Candler Parker is kinda rhymish with the same “er” endings but Ky Candler doesn’t sound as good rolling off the tongue. When we went to California in October with Aflac we were at the airport and got to talking to this precious older couple and the lady asked us our baby names. Since they were strangers we told them and when we said “Candler Ky” she immediately said “Oh how do you spell Ky? K-y-e?” So we decided to go with KYE because if it came natural to her then it would to other people as well. Plus when you read K-Y-E it is obvious that you say it how it’s spelled. The other ways of spelling it are Kai (wouldn’t you say Kay without meaning to?) or Ki (kinda looks oriental and would be tempted to sound country).

Big Daddy and Little Mama came in the room soon after the big announcement and Big Daddy was his sweet self as usual! He had a “secret” for me and whispered in my ear how proud he is that I chose to breastfeed. He’s thrilled that we have continued on the Parker name to the next generation! It’s great to have a son because that pressure is off me now! Now if the other three babies are girls it’s okay because we already have that boy ya know? 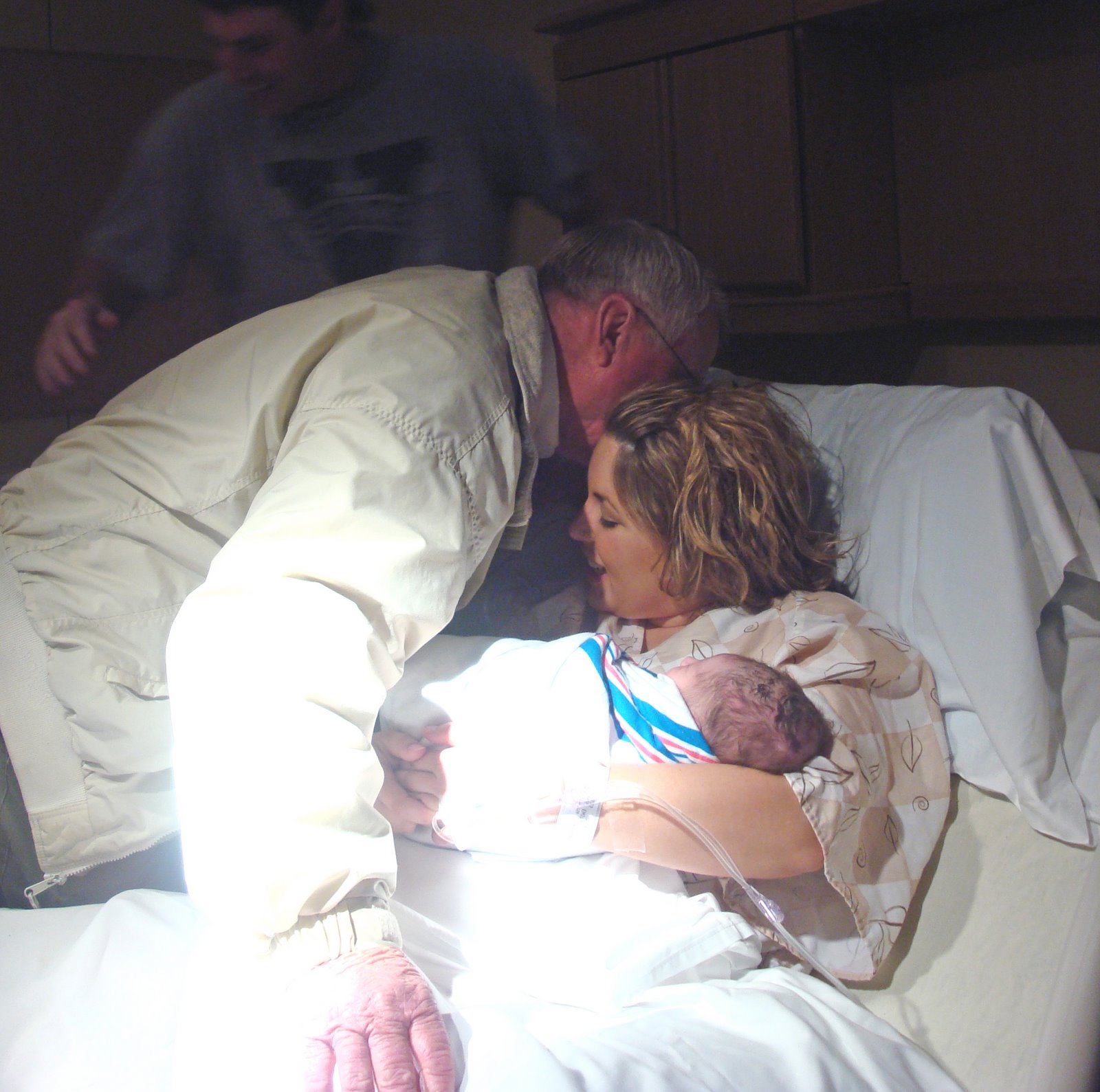 One thing I was not that pumped about that happened is that a bunch of people from the Student Center came in! It was very very nice and thoughtful of them to stop by, but it was pretty awkward for all of them to come in the room I gave birth in! Zach said it stank pretty badly and I was pretty embarrassed since they are not super close friends or family. It was nice that Bryan, our preacher, came in! He’s one of the ones who swore I’d want drugs and I know he was mega impressed that I pulled it off. He lead us all in a prayer blessing our new family and I especially appreciated how he prayed for Kye growing up in the church to become a good Christian man someday!

Here is the video of the big announcement! I asked one of the nurses to take it for me..she did a great job but didn’t really know when to STOP recording so it’s a bit long! Brandon and Chrissy took a great, shorter, video but I can’t figure out how to get it up here! Enjoy!