I know I have blogged before about my main pregnancy cravings and the number one item on that list has ALWAYS been Choco Tacos. I first wanted one when Zach and I were in Asheville, NC and he wouldn’t buy it for me because it was $3.50 (a rip-off I admit). Of course Taco Bell’s no longer sell them and you can’t buy them at either of our walmarts, our publix, or any of our gas stations. I’ve heard that one Mexican restaurant has them but I haven’t actually tried going in there for one, at least not yet!

Well on our way to Atlanta Friday afternoon we stopped to get gas and I now LOVE the city of Vidalia! I was heading to the bathroom in the gas station and just did my routine peek at the ice cream bar box thing and there it was!!! I was pumped!!! 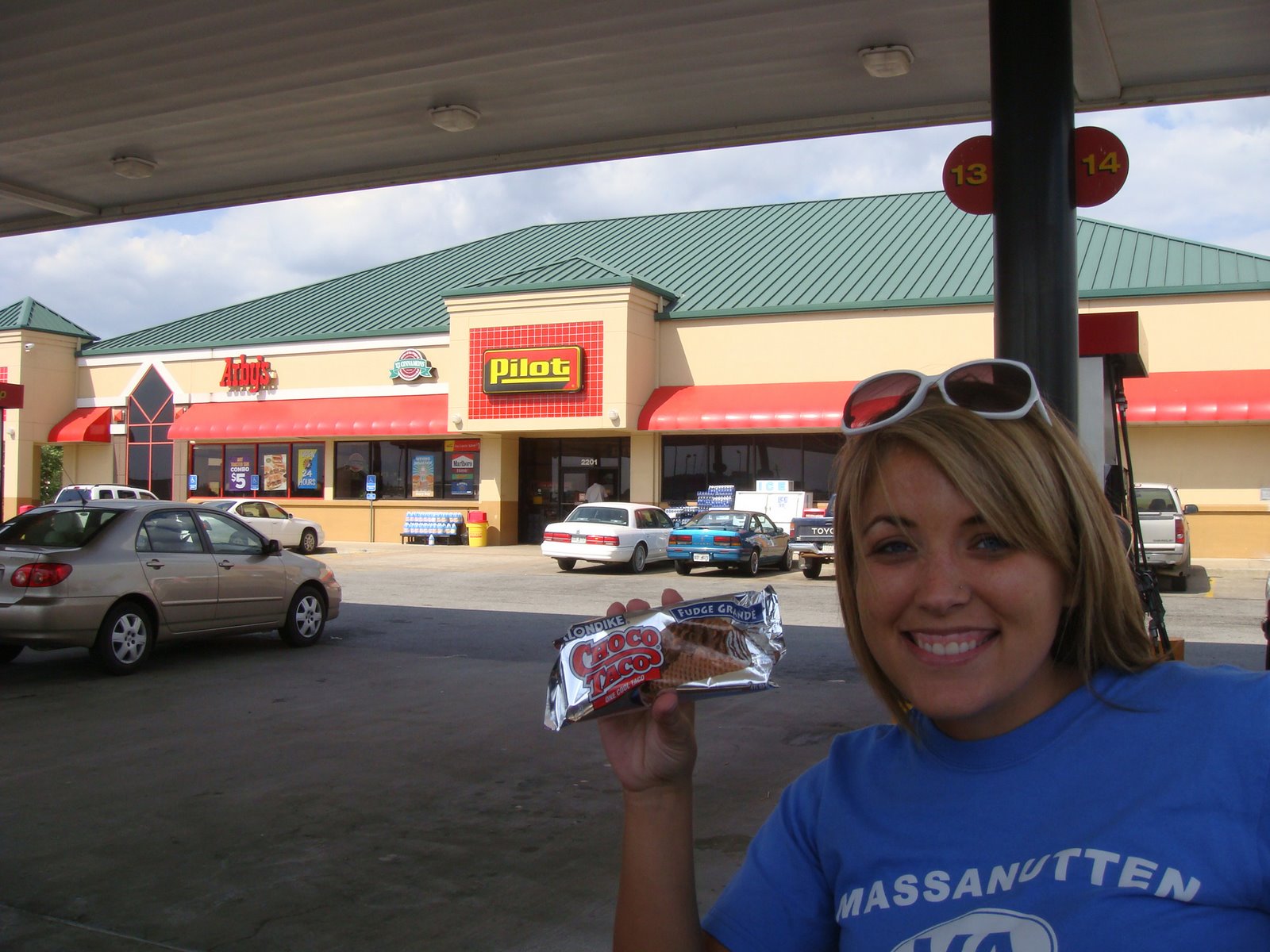 It isn’t a secret that I’ve been wanting one f o r e v e r. I was totally prepared to devour all 290 calories as quickly as possible but of course my husband wanted a bite! Lucky for me he just took a tiny tiny one 🙂

I soooo look like I belong on the show The Biggest Loser in this picture haha! It was soooo good though and I did something I never do ever and got it on both my shirt and pants somehow! So if it was yummy enough to risk my clothes over it…then that says how amazing it was 🙂 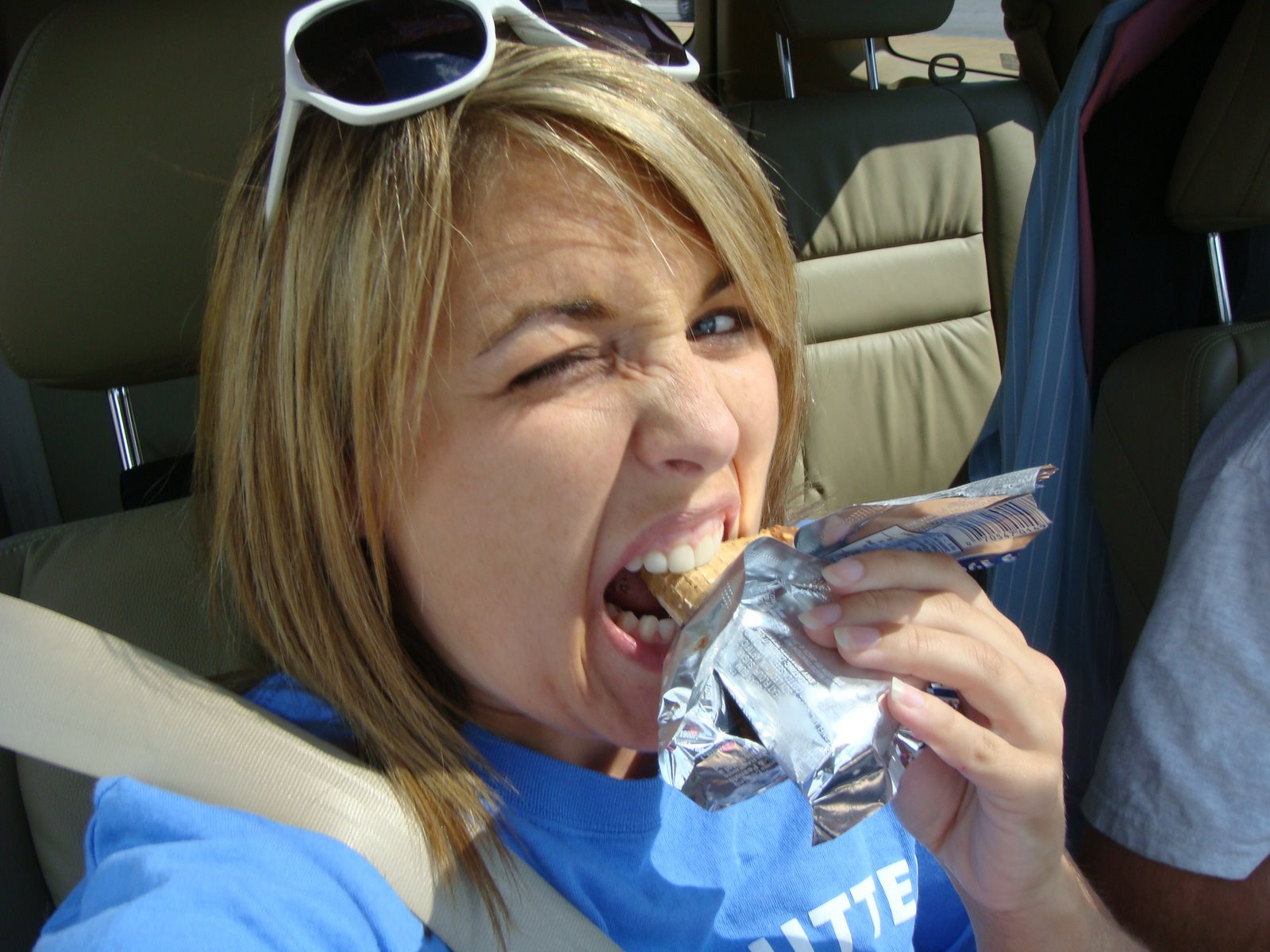 Everything in life has a consequence. I met up with Kecia, who is due 2 days before I am, on Thursday to compare pregnancy notes and she was so much bigger than me already! It made me think something could be wrong with me or that maybe she is having twins and doesn’t know it or something! She is already wearing maternity clothes and having people comment on her cute tummy while I’m still walking around in my normal clothes just sporting a “beer gut.”

Thanks to my Choco Taco all of that changed…I left Valdosta a chubby version of Emily and came home a pregnant version!

This is me at 17 weeks pregnant!!! Can you believe the change? It is probably about that time where I should start wearing my maternity tops (I’m still good with my low rise pants!) because I don’t want to risk stretching out my regular clothes! 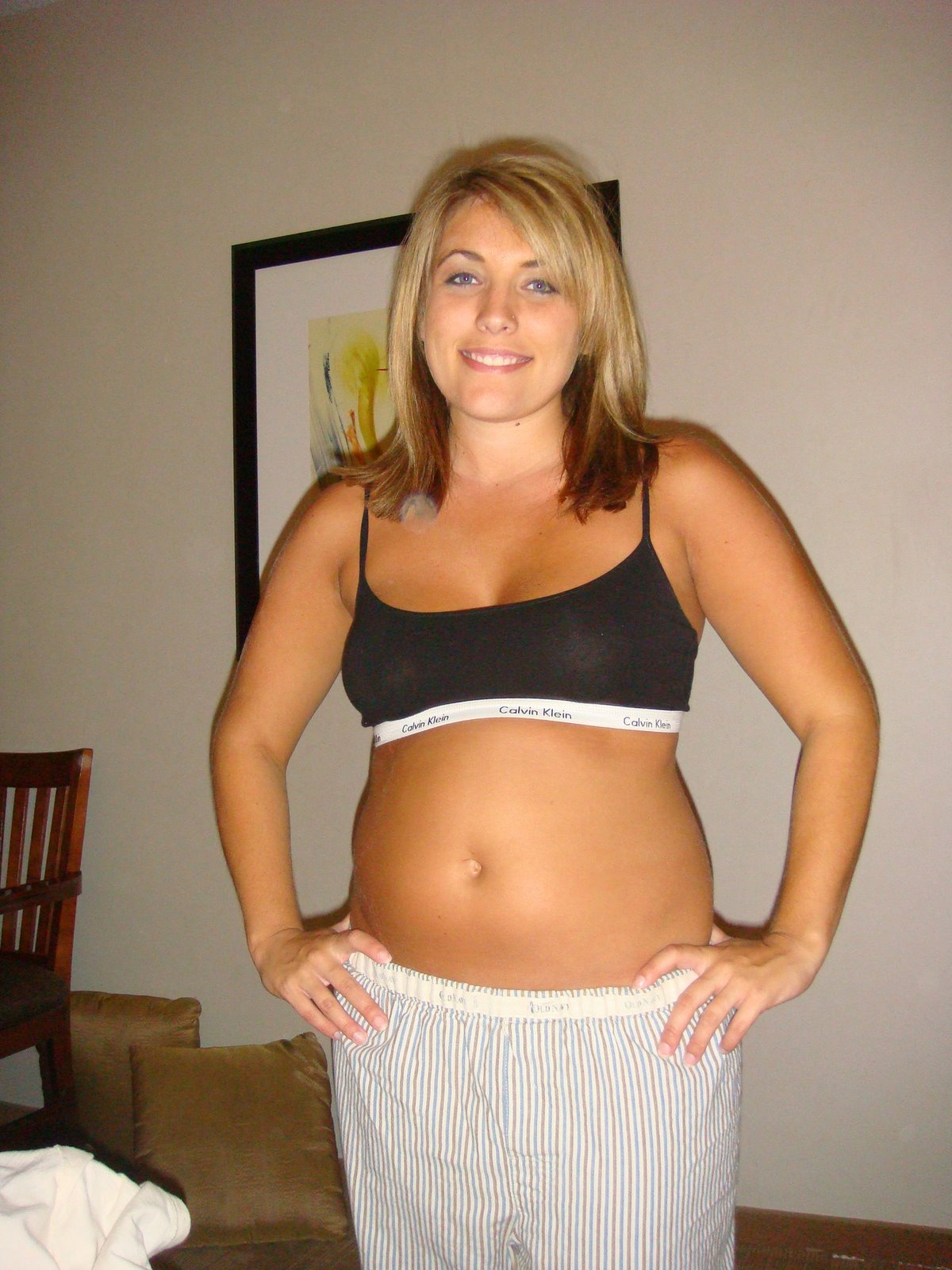 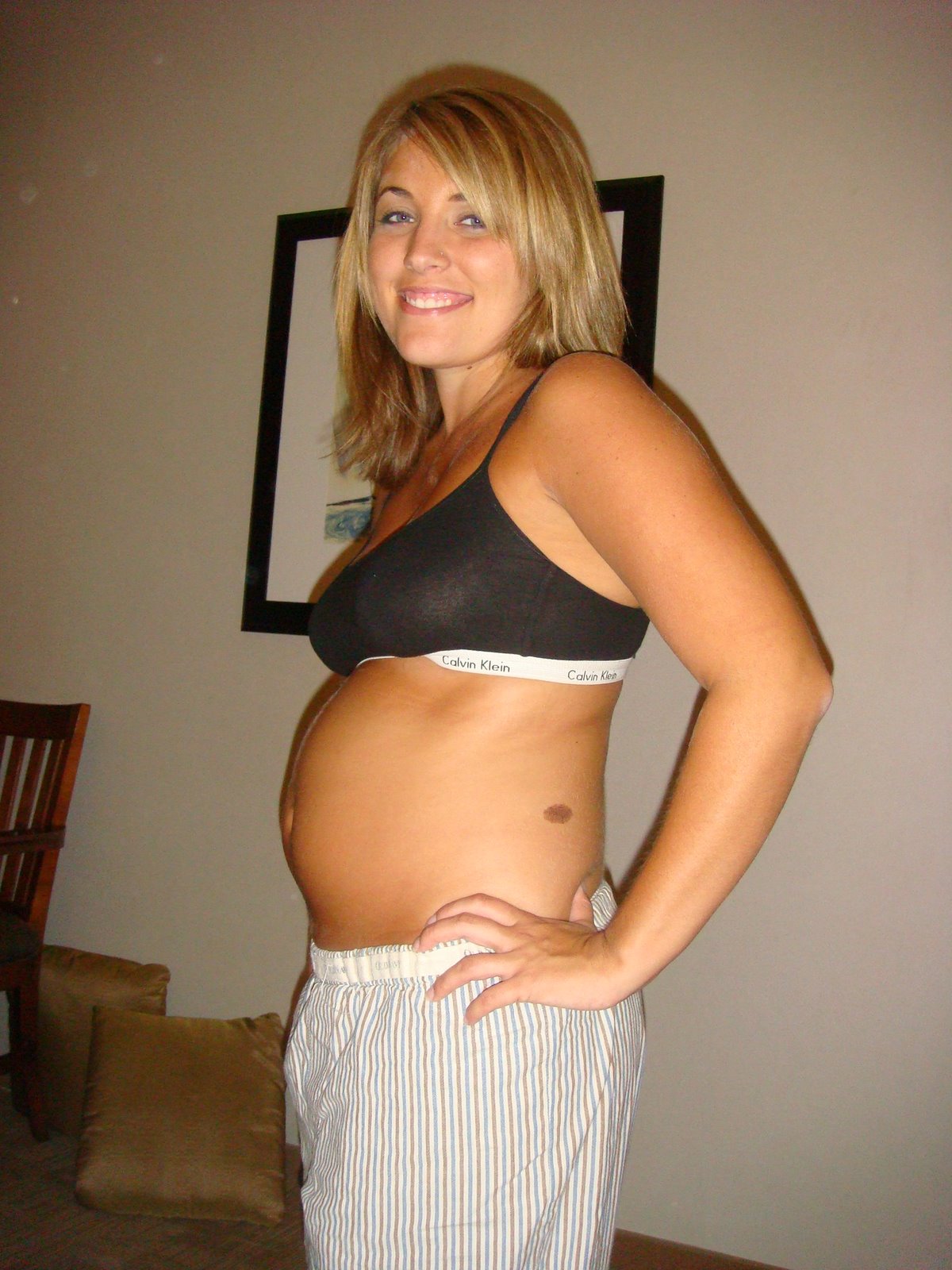 Zach and I are both pretty excited about it! It makes the whole pregnancy feel more real to us I think! Of course I’m not really wanting the tummy to get any bigger but I know that it will happen anyway! It’s so funny though because as a woman I KNOW when I have gained weight. I can always tell around “that time of the month” that I’ve put on 2 or 3 pounds and I have always known when it’s time to start downing the Slim Fast to keep the pounds in check.

But this is so so so different! I FEEL the same! I just look down and look bigger! So strange! I even weighed myself this morning and I have only gained a pound since last time I weighed…so why is the tummy so much bigger? Wouldn’t you think I would feel a difference?

Also by the way I can confirm kicking feelings! I was pretty sure I was feeling them all along but Kecia told me she usually feels her’s when she is laying down and that’s the same for me! To be 100% honest, it’s cool but it feels so much like gas that it’s not life-changing or emotional or anything, at least not yet 🙂

I was excited for Ashley to see my tummy when we got home because she is obsessed with it and always comments everytime she sees me on whether or not I look pregnant that day. This is her face when I pulled up my shirt and showed her the belly! So priceless! 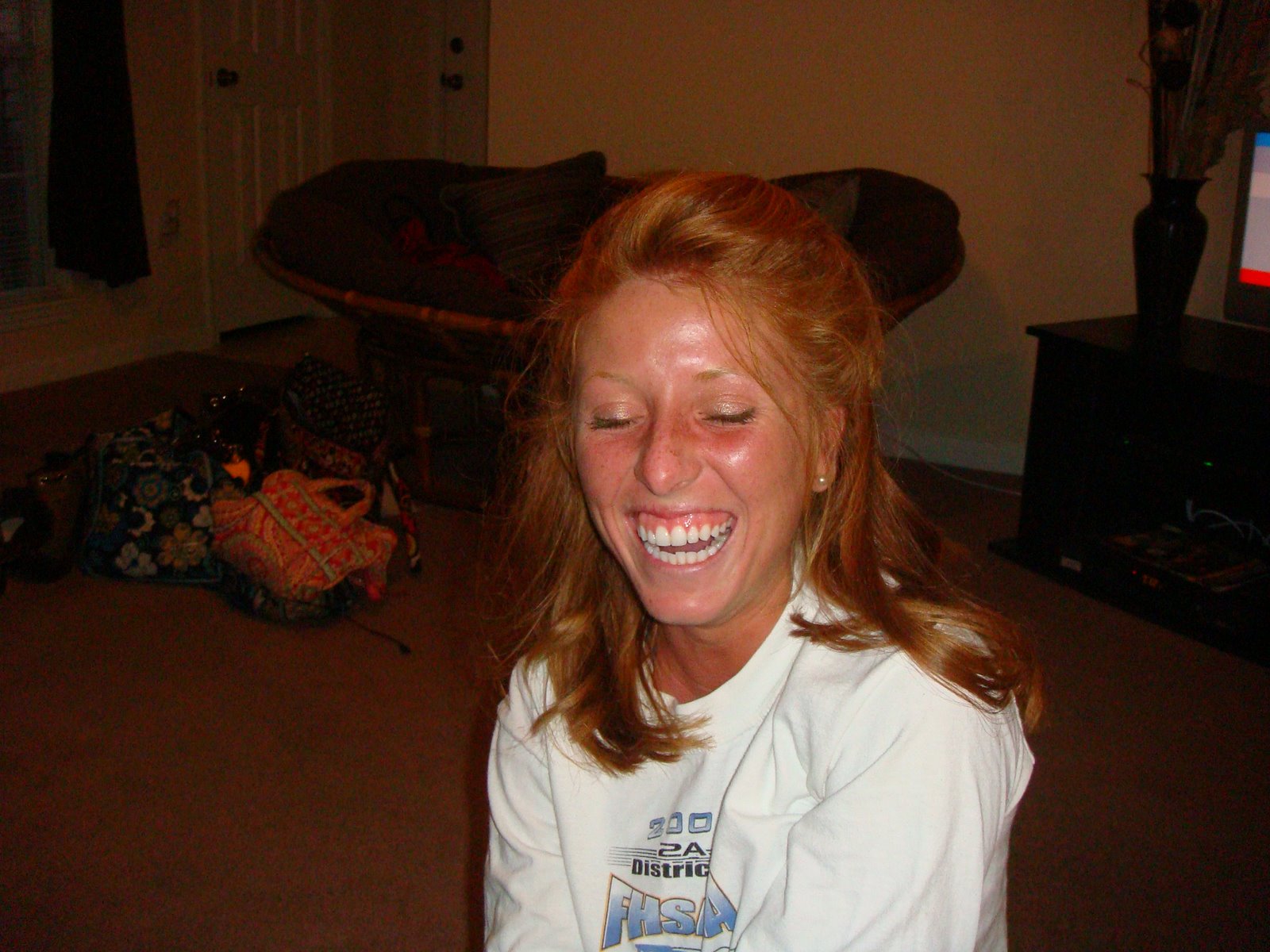