We bought our van back in 2014 and paid it off within that first year. It’s the first car I’ve ever owned and I LOVE it. I love the convince of having a van and have felt SO SAFE riding in it these past 3 years.

Last week a friend shared this article with me and it really blew my mind. An issue with the seats in my van? Are you kidding me?

Close to 650,000 Odyssey mini-vans are being recalled. Models from 2011-2016. It’s a safety recall due to the second row of seats not locking in the event of a crash. From what I read they plan to be contacting owners by the end of February but I know a BILLION people who own my same van (legit the girl’s school parking lot every day has a solid 15-20 Odysseys) and I cannot fathom letting anyone continue feeling a false sense of safety with this van. 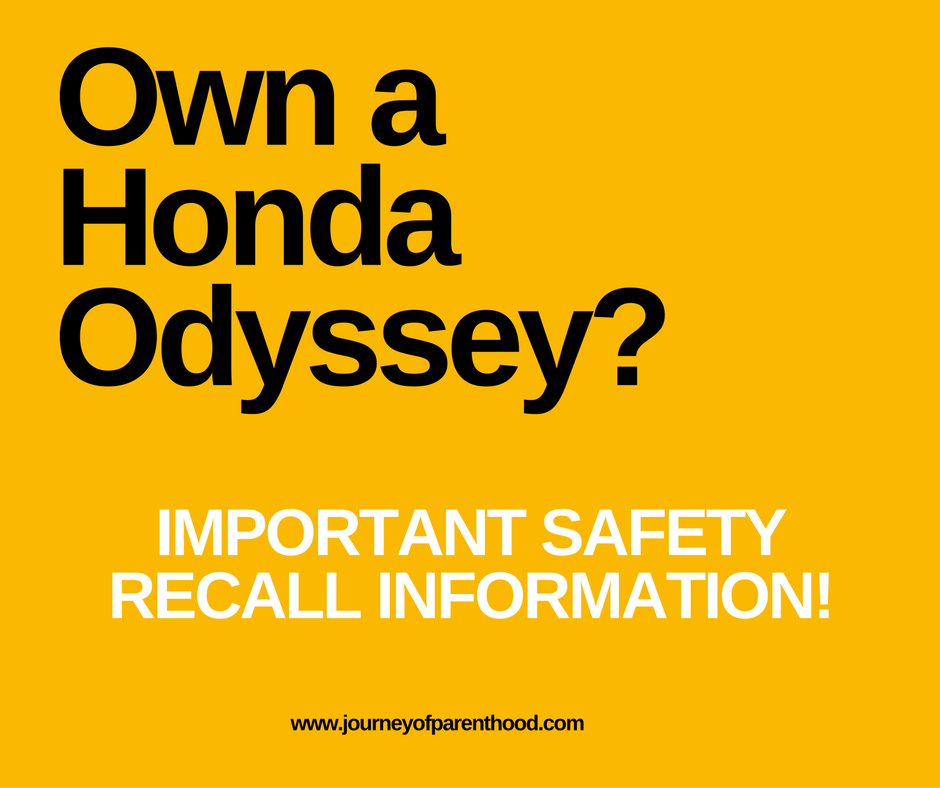 I appreciate that they are letting us know about this and providing a fix for it, but it makes me sick to my stomach to think what could have happened if I’d been in a wreck in my van. I’m super passionate about car seat safety but what is the point of having your kids in super safe car seats if the entire vehicle seat isn’t safe?

I contacted Honda via their Facebook page. I refused to just sit and wait for some letter in the mail in mid-Feb. No way could I keep driving my kids around (both girls use the seats that are needing repair) with this knowledge!!! Honda replied to my concerns with a number to call and I spoke with them yesterday. I tried to down play the concerns because who wants to feel like their kids haven’t been in a safe situation? But the agent was very firm in the safety concerns with this issue and went as far to advice me to immediately remove my daughters’ car seats from the seats in question until I get the repair completed.

My next call was to my local Honda dealership. They JUST got the parts in stock to fix the problem and I’m actually the first person in town to call about it. They said it’s replacing the locking mechanism of the two second row seats. It’s not a complicated fix but they did recommend dropping it off as it will take them awhile to make sure the follow the proper protocol.

They are on Pacific Standard time and open at 9 am est. They also did have some weekend hours but I can’t recall specifically what they were. I was NOT on hold very long (probably because the official letters haven’t been mailed out so people don’t know about this yet!).

Be sure to have your VIN number (located inside the frame of the driver side door) as they need it to see if your vehicle is part of the recall.

They also said you can just call your local dealership and give them the VIN number and they can check it for you. But I did appreciate speaking with a Honda rep who was knowledgable about the specifics of the safety recall.

I know this isn’t my typical type of blog post but I hope it helps other #vanmoms to get the info they need to keep their babies SAFE!