Day three started off wonderful of my hospital stay! I told each nurse that came in that we were planning to leave around 3 that afternoon so I wanted to do all my discharge stuff as early as I could. I got a text from Zach pretty early saying that he and Kye were heading my way! They had a great time just the two of them…here’s a video Zach took of the new game they played (and I’ve told my husband a MILLION times that you cannot flip a video…yet he still takes them this way…) I was able to get ready before they arrived 🙂 I was SO excited to see Kye and he was THRILLED to see me. Zach said he was yelling in the car the whole way up to the hospital “MOMMMMY we’re coming to SEEEE YOU!!!!” so sweet 🙂

Me and My Boy! 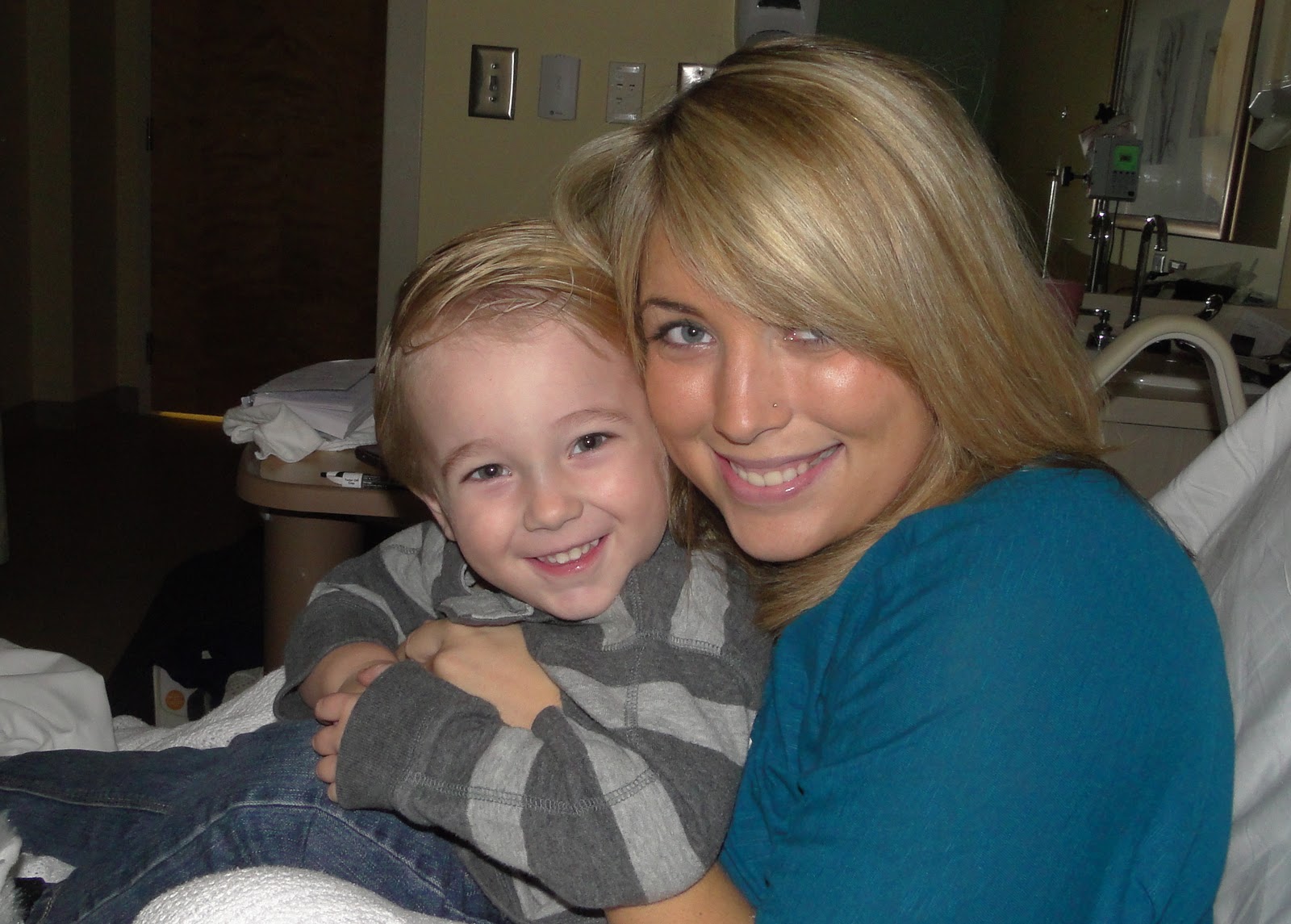 Mr Rusty was there at about the same time they came but only stayed a minute because I needed to nurse and the lactation specialist had come into the room to see me nurse so I couldn’t be all covered up with a hooter hider. She said everything looked good but that I needed to get Brittlynn to nurse faster and not let her take so many breaks. This kinda screwed me up. We had a good thing going…yeah it took an hour each feeding but she was happy and content and eating well. When I started rushing her, she stopped eating as well and stopped being satisfied for as long. It’s another proof that I’m a second time parent – I decided to ignore the lactation lady’s suggestion and just go with my instinct, something I would have never done as a first timer!!! 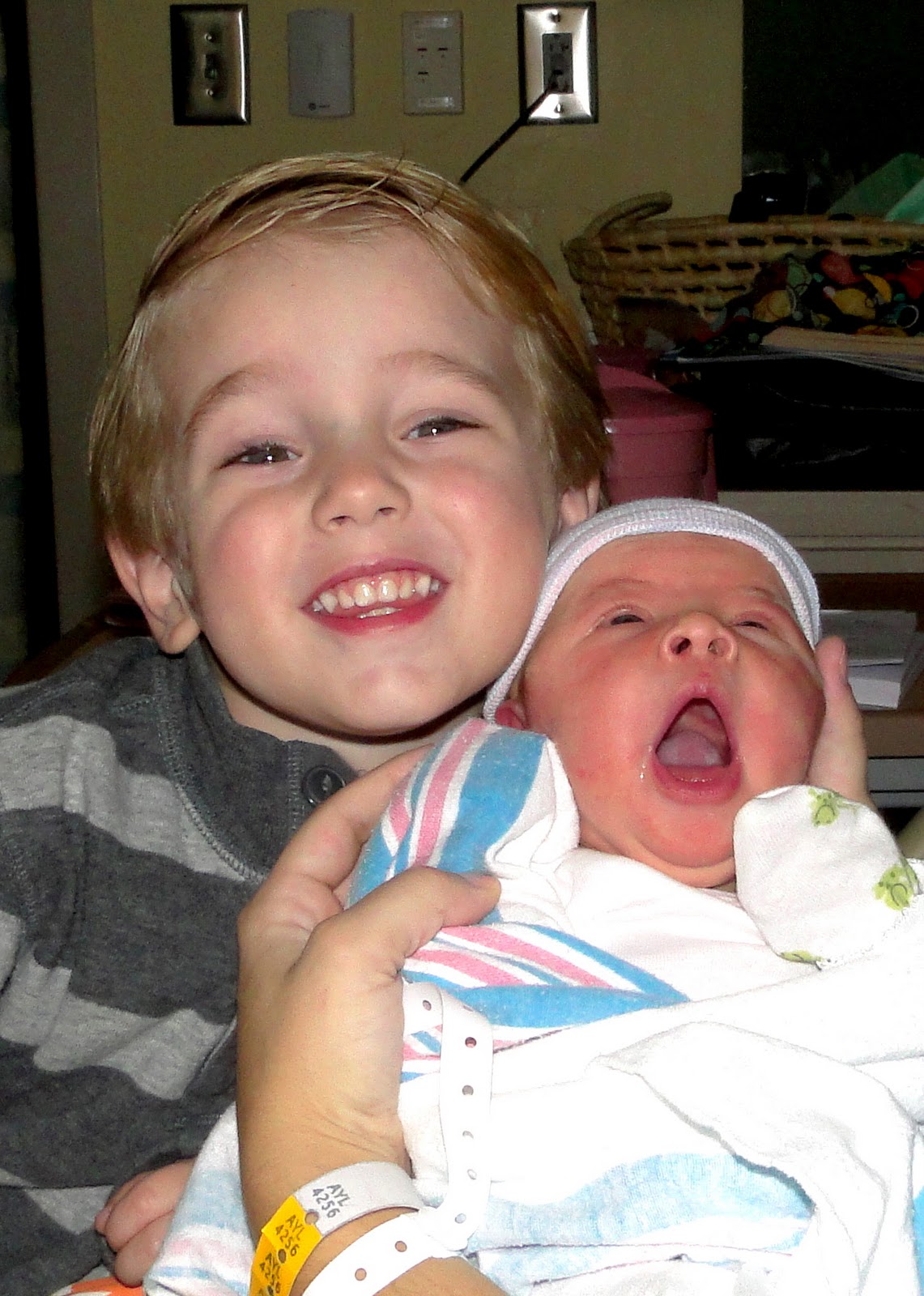 While Kye was excited, he quickly got over it and wanted to play. We didn’t force anything on him…he’ll spend the next 15 years or so living with Brittlynn…there’s no rush or pressure for him to play with her. We asked if he wanted to hold her and he said “no” and that was fine! He had a BLAST playing in the closet of the hospital room. 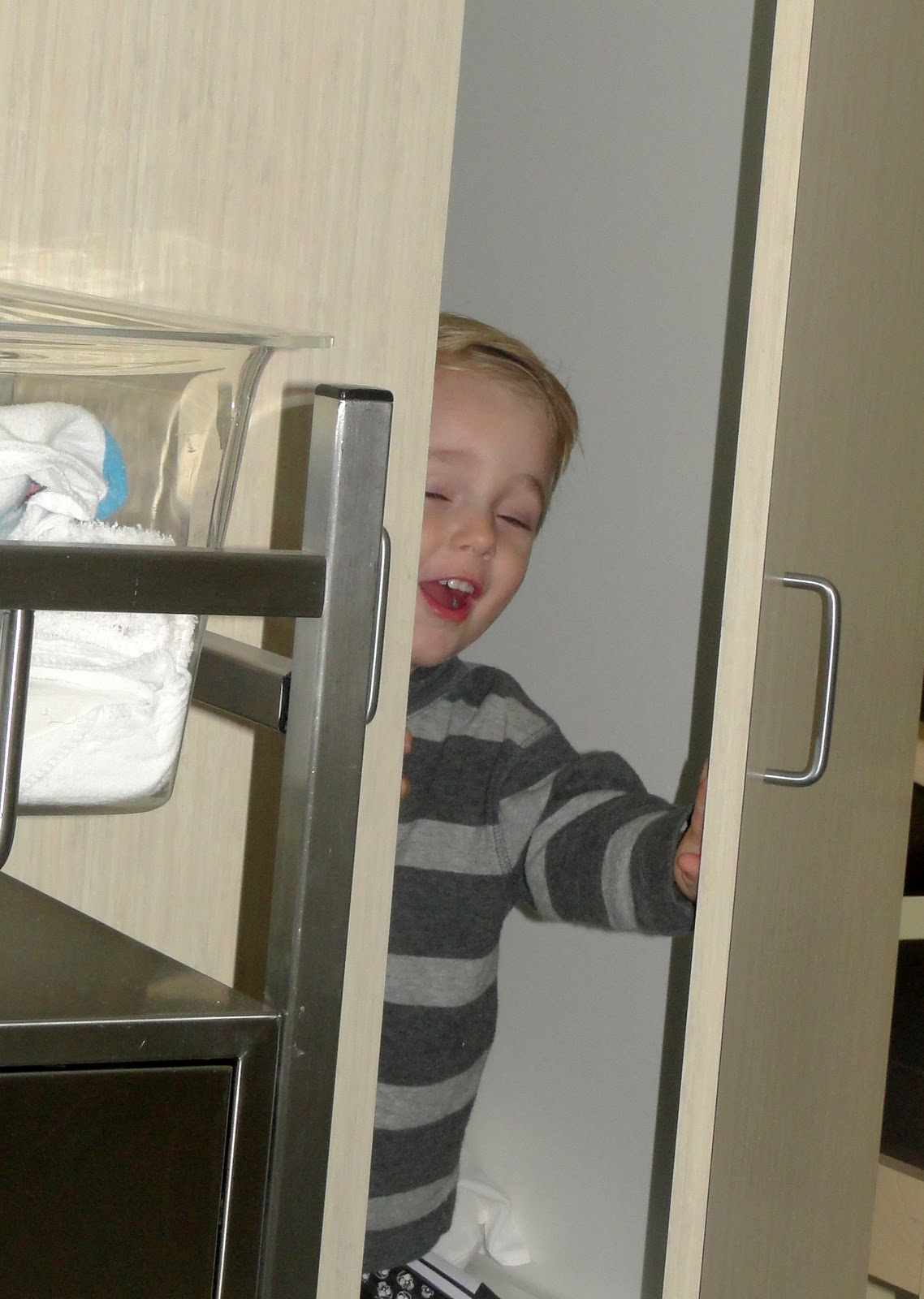 Where could Kye be? 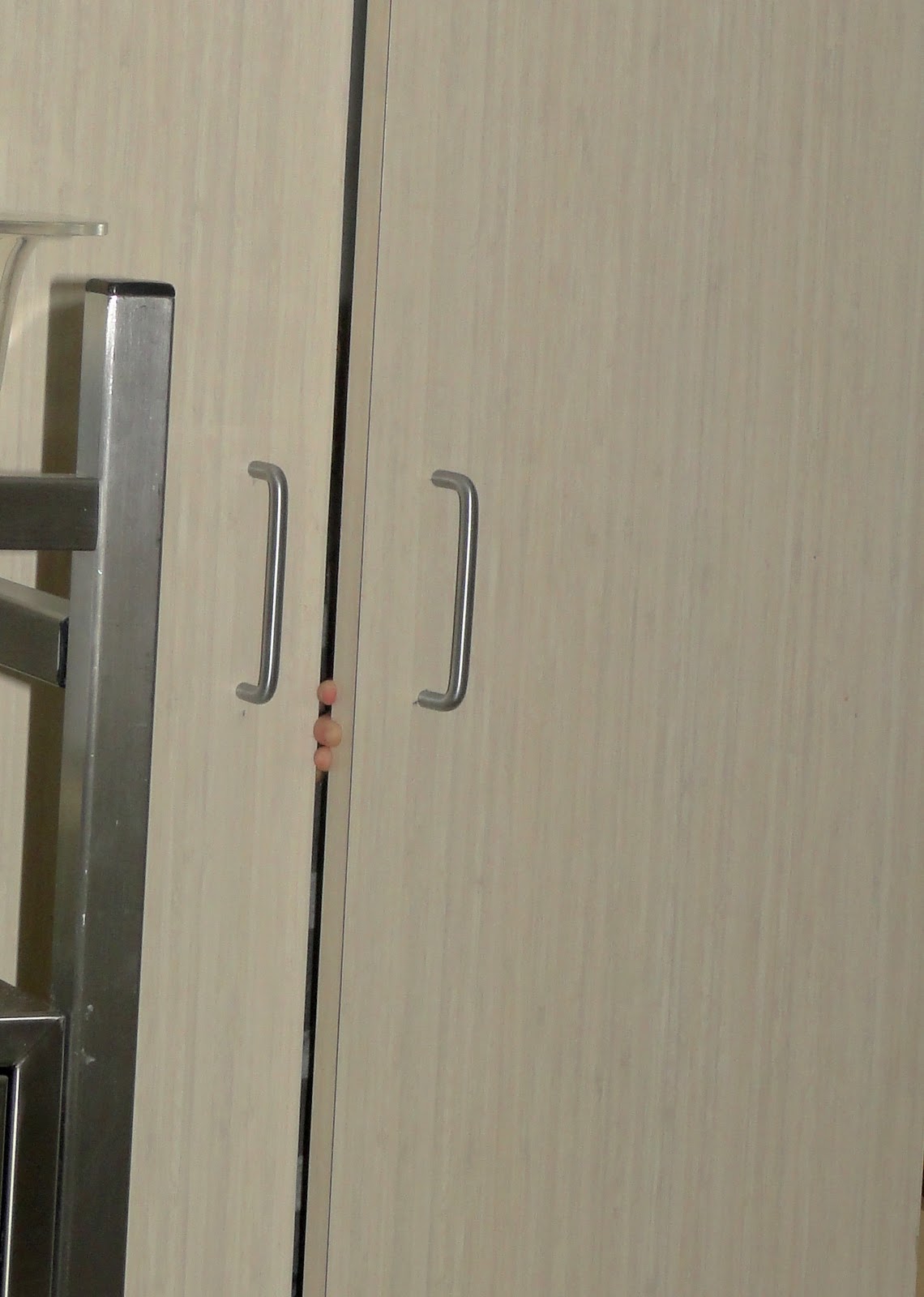 Eventually he came back over and did want to hold her. He did a GREAT job and was so sweet to his sister…Here’s his first time holding her! 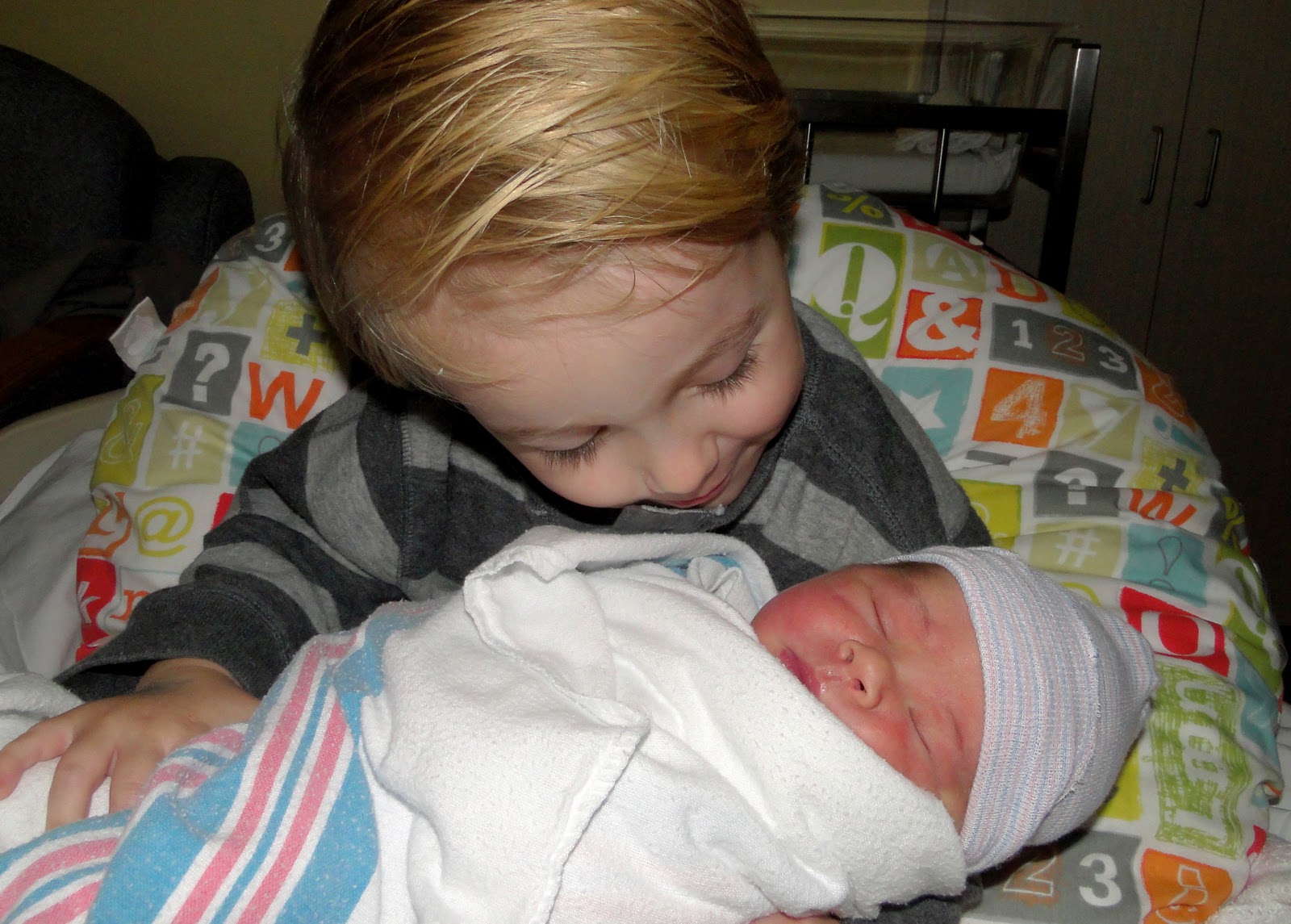 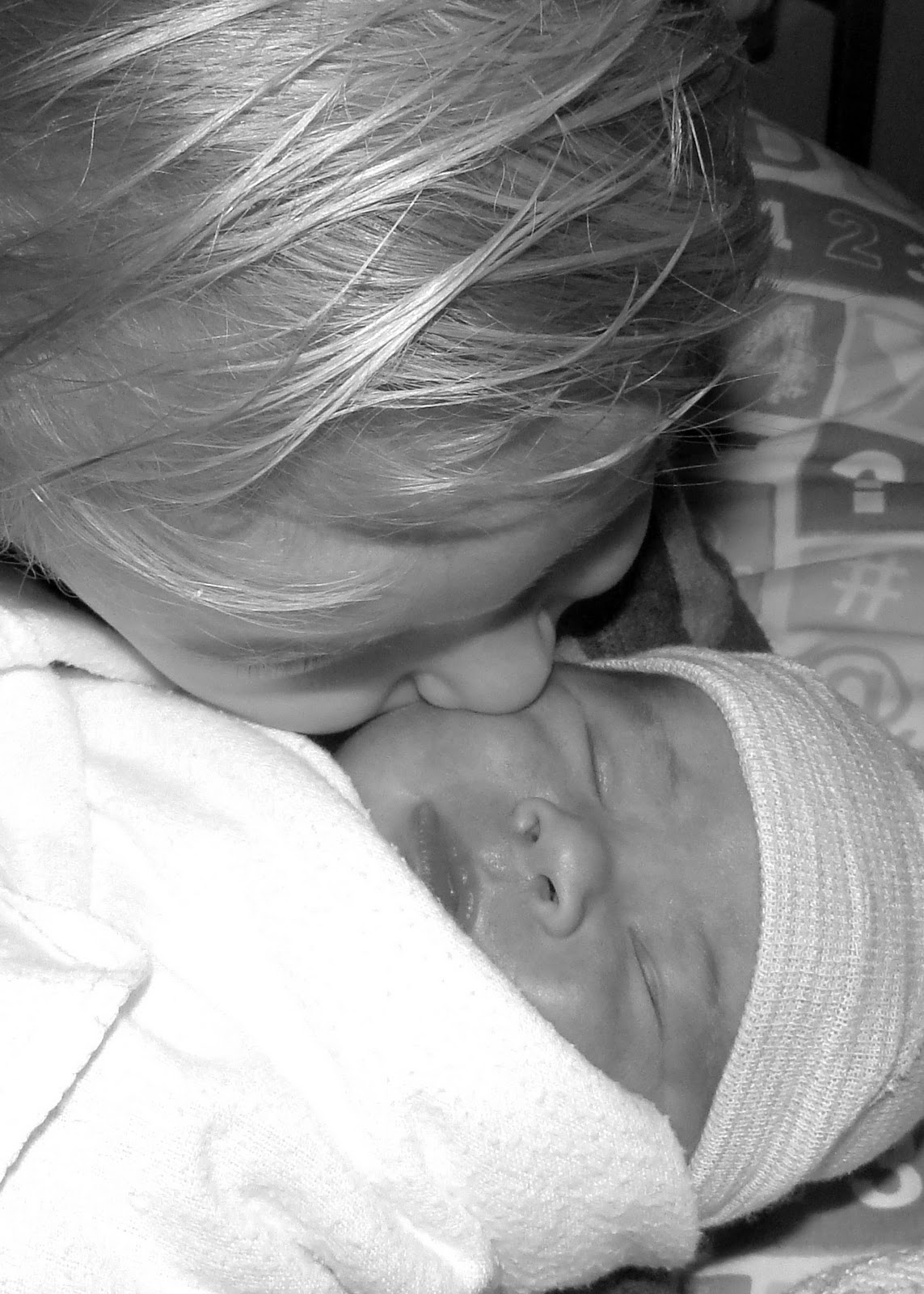 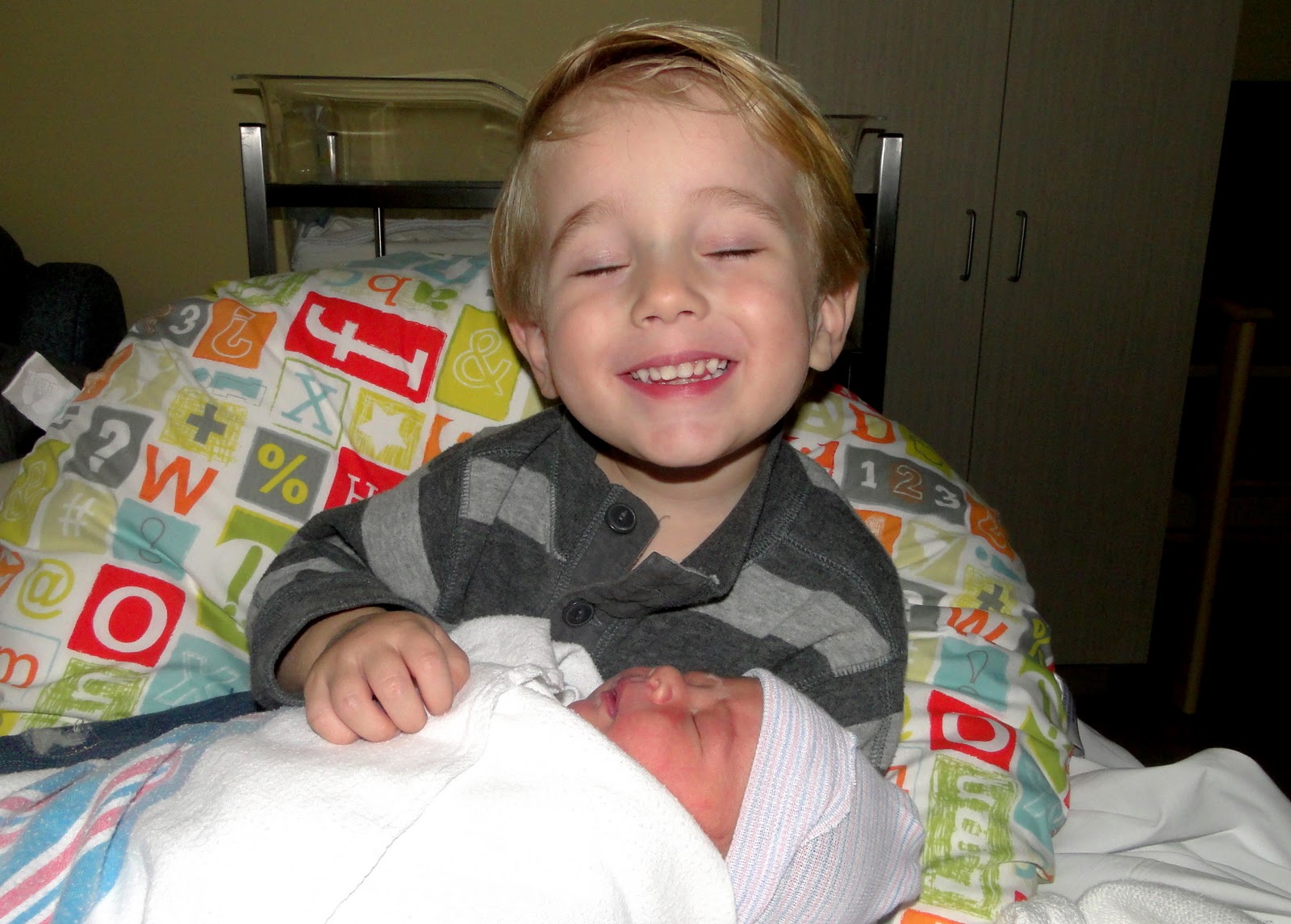 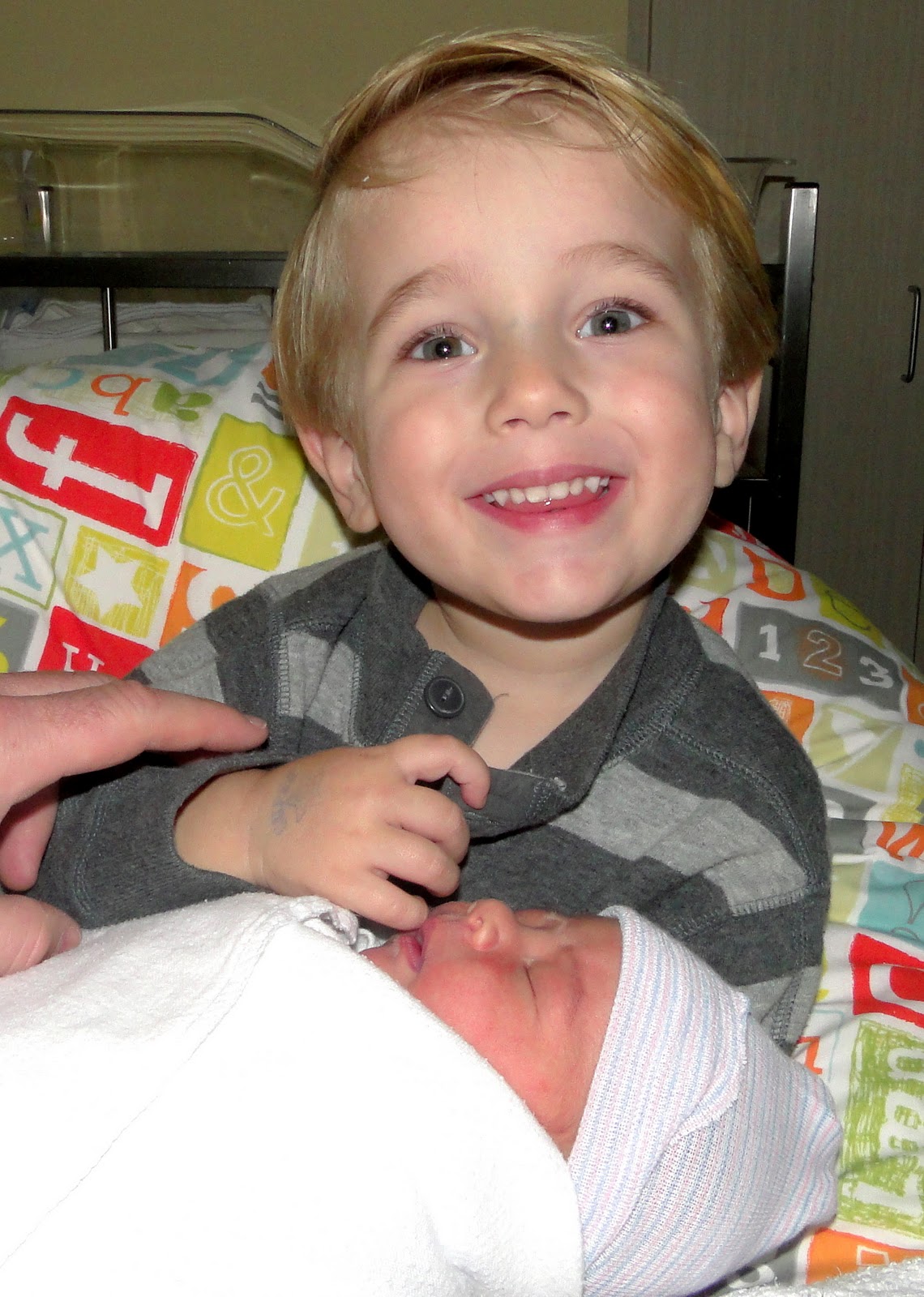 I told Zach that it would be a sweet idea if the two of them got Brittlynn and I a little gift before they came up to the hospital. I pictured them picking something out from the (randomly awesome) hospital gift shop. Something sweet and meaningful that we could both keep forever…instead when I talked to Zach that morning he said that they were on their way to the dollar store to pick us out some gifts. Typical guys right? Kye picked them out by himself which was sweet. He got me a little snowman ornament and he got Britt a snowman stuffed animal. Here’s a video of him giving it to her. 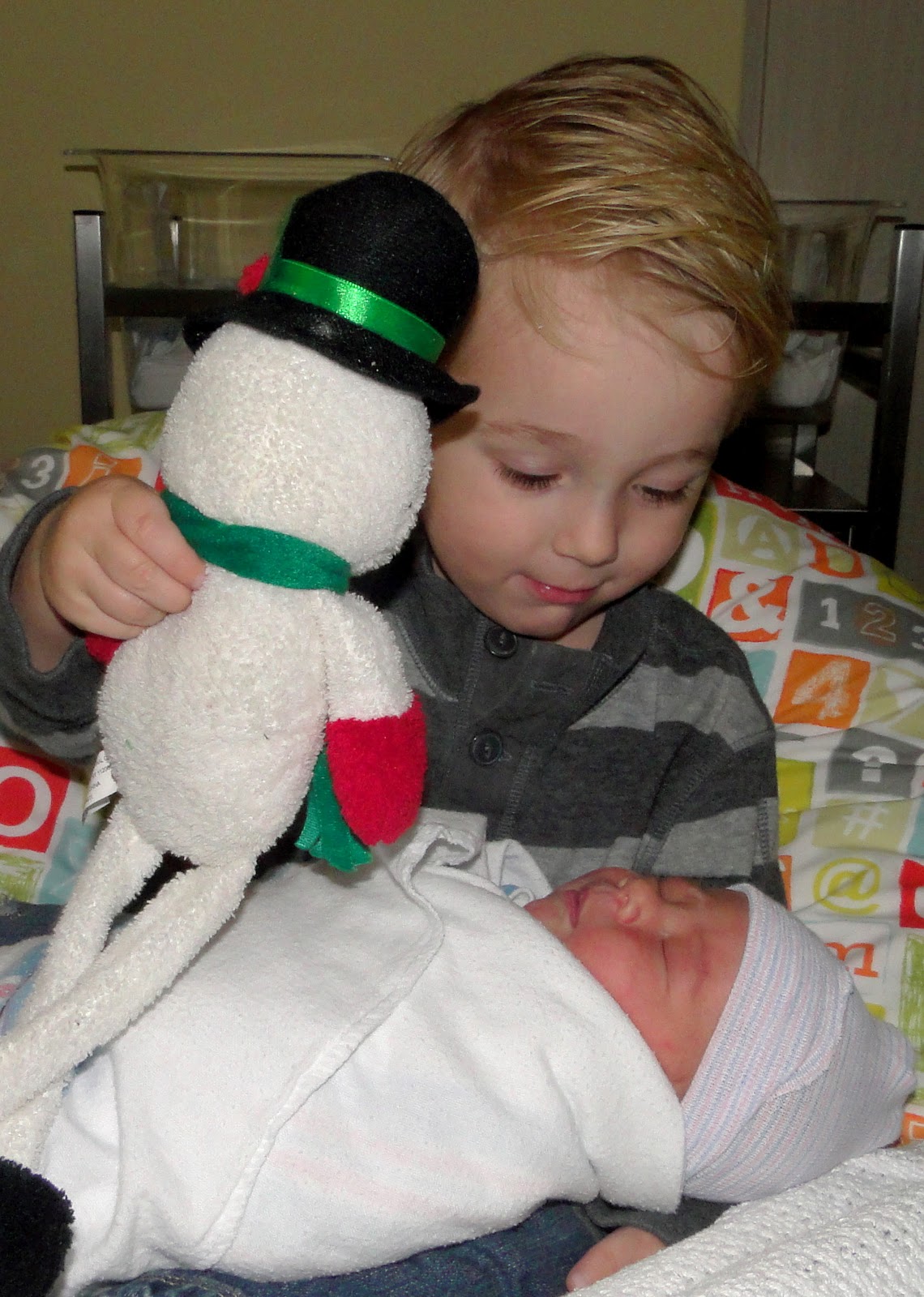 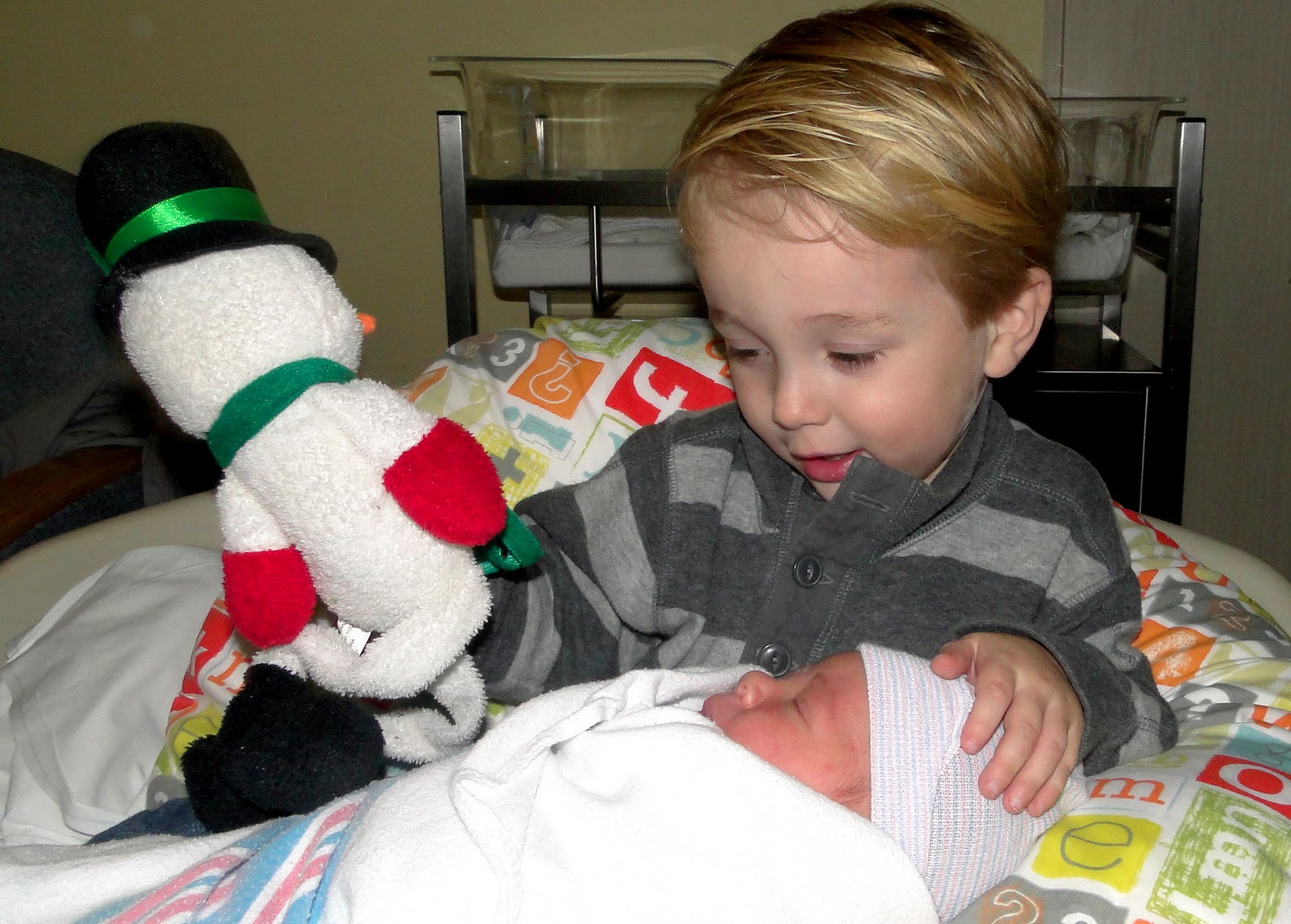 Kye got bored pretty quickly (I don’t blame him, hospitals simply aren’t very cool) so they headed home to work on our welcome home sign and eat lunch. Our plan was to leave the hospital after Kye’s nap! While they were gone I had the nursery take Brittlynn so I could get a little nap then Mom and Jordan both came by for a visit. I also filled up on all the free hospital food I could 😉

A nurse came by to go over my discharge information then another came by to go over Brittlynn’s. Dr Griner also came in to let me know that she was perfect and healthy and we scheduled our two week visit in his office with Kelly, his PA. Part of my discharge instructions was to not go anywhere for two weeks! I was supposed to soak in an Epsom salt bath 2 times a day, 20 min per time and spend the first week doing nothing but focusing on my well being and Brittlynn’s well being. Yeah. Right! I have a toddler at home!!!

They weighed me and I only lost 5 lb!!!! I couldn’t believe it. I know Zach said I’d gained 7 lb on their scale when I went into delivery so technically I guess I’d lost 12, but I wanna stick to my home scale weight since it’s what I used the whole pregnancy. As of my last time weighing in while pregnant I’d gained a total of 22lb during the pregnancy and since I lost 5 after having her, I still had 17 left to lose. I tried not to freak out about it because my milk had come in that day so my breasts were HUGE and mega FULL plus I hadn’t pooped in almost three days and that can make a difference!

With one of her nurses we went over all the baby things for me to remember. I had to make sure to get in about 8 feedings per day and needed to count her wet/poop diapers. I could bathe her but we aren’t supposed to use any product on her body until her cord falls off.

I was excited yet also a little nervous about going home. How would life be with two?!?! Could I handle it?!?! If I was already so exhausted how exhausted would I be trying to juggle all the responsibilities of running a household?!?! Before leaving I soaked up some quality Mommy and Brittlynn time 🙂 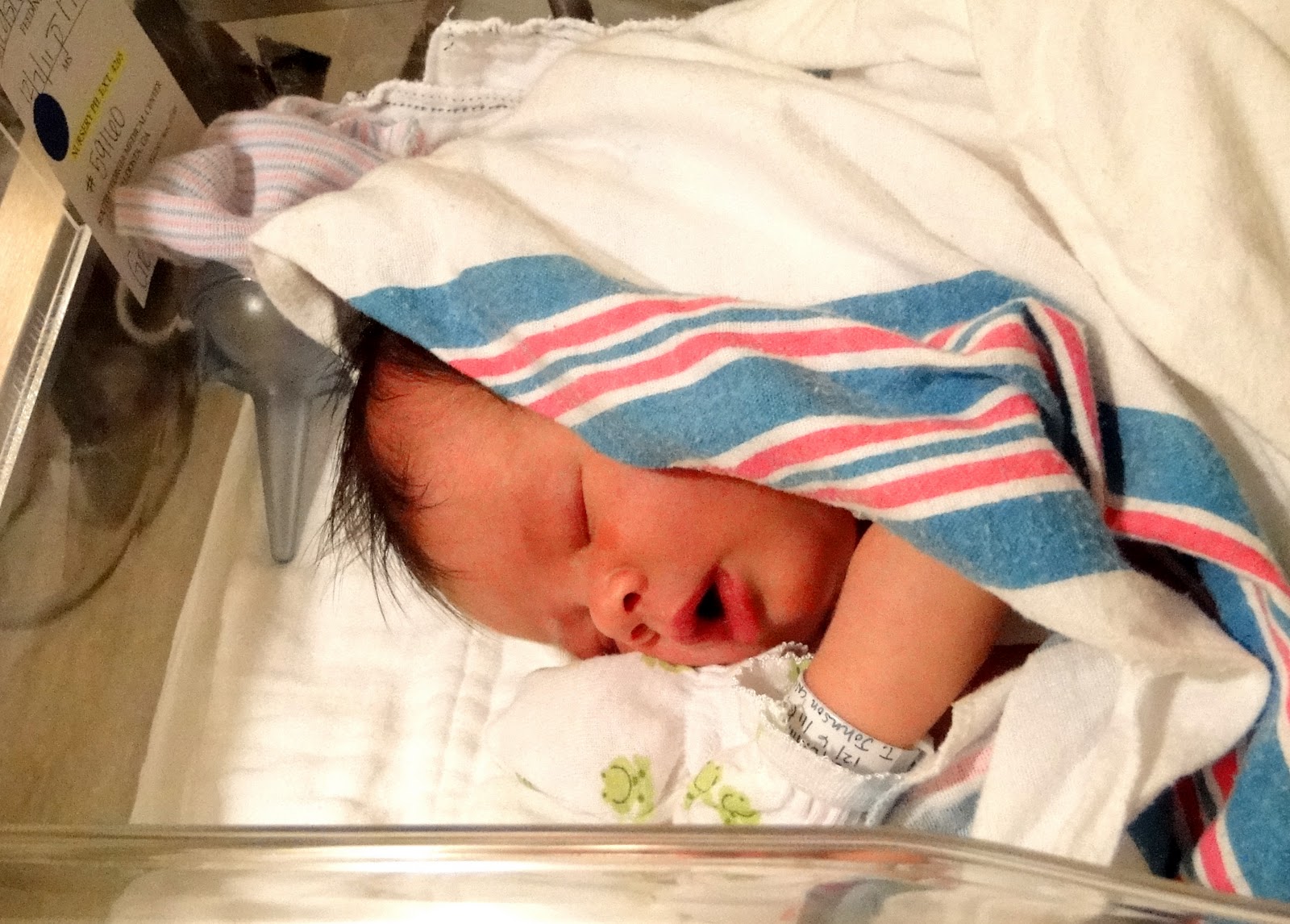 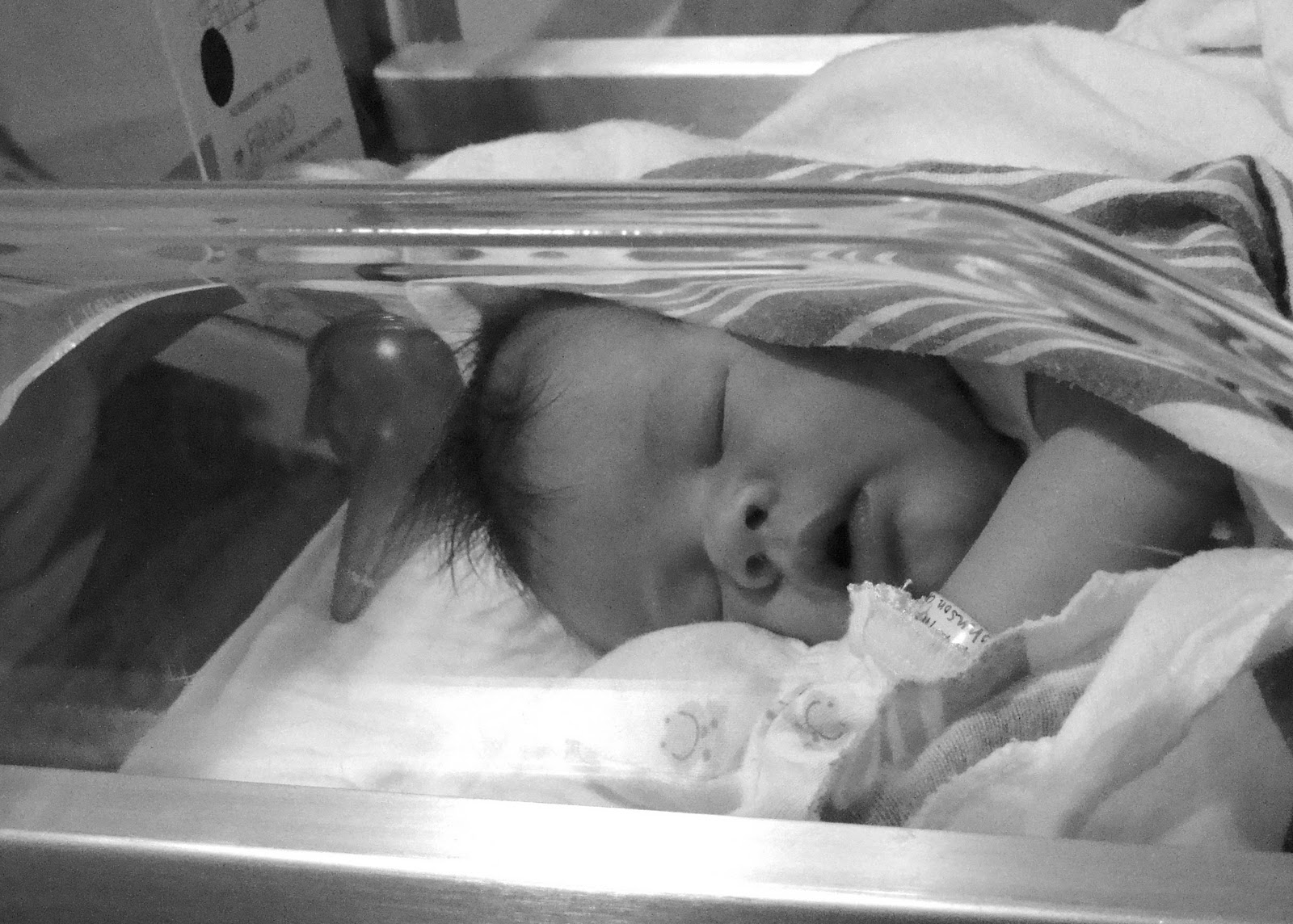 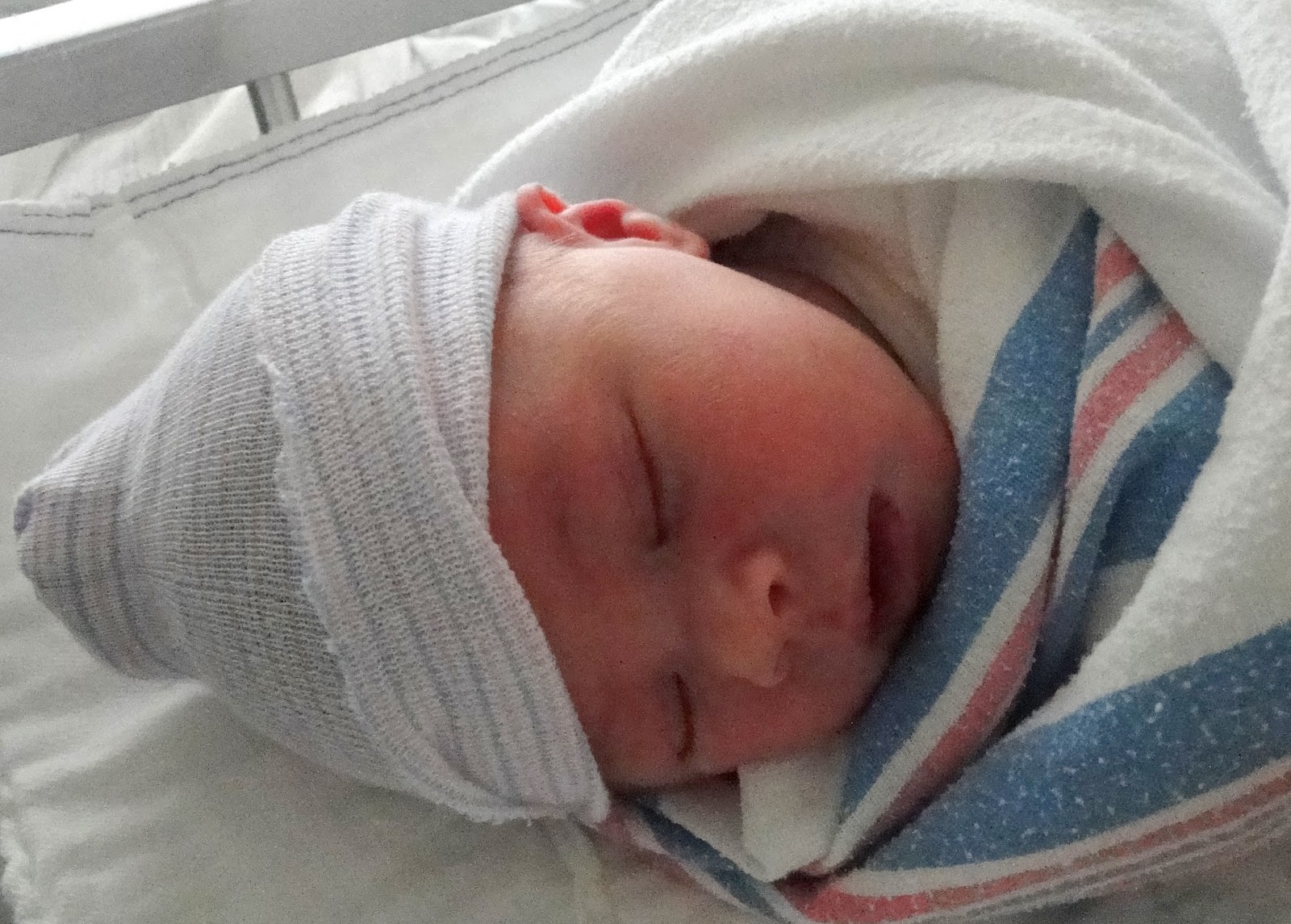 The cute Angel bank Mom got her! 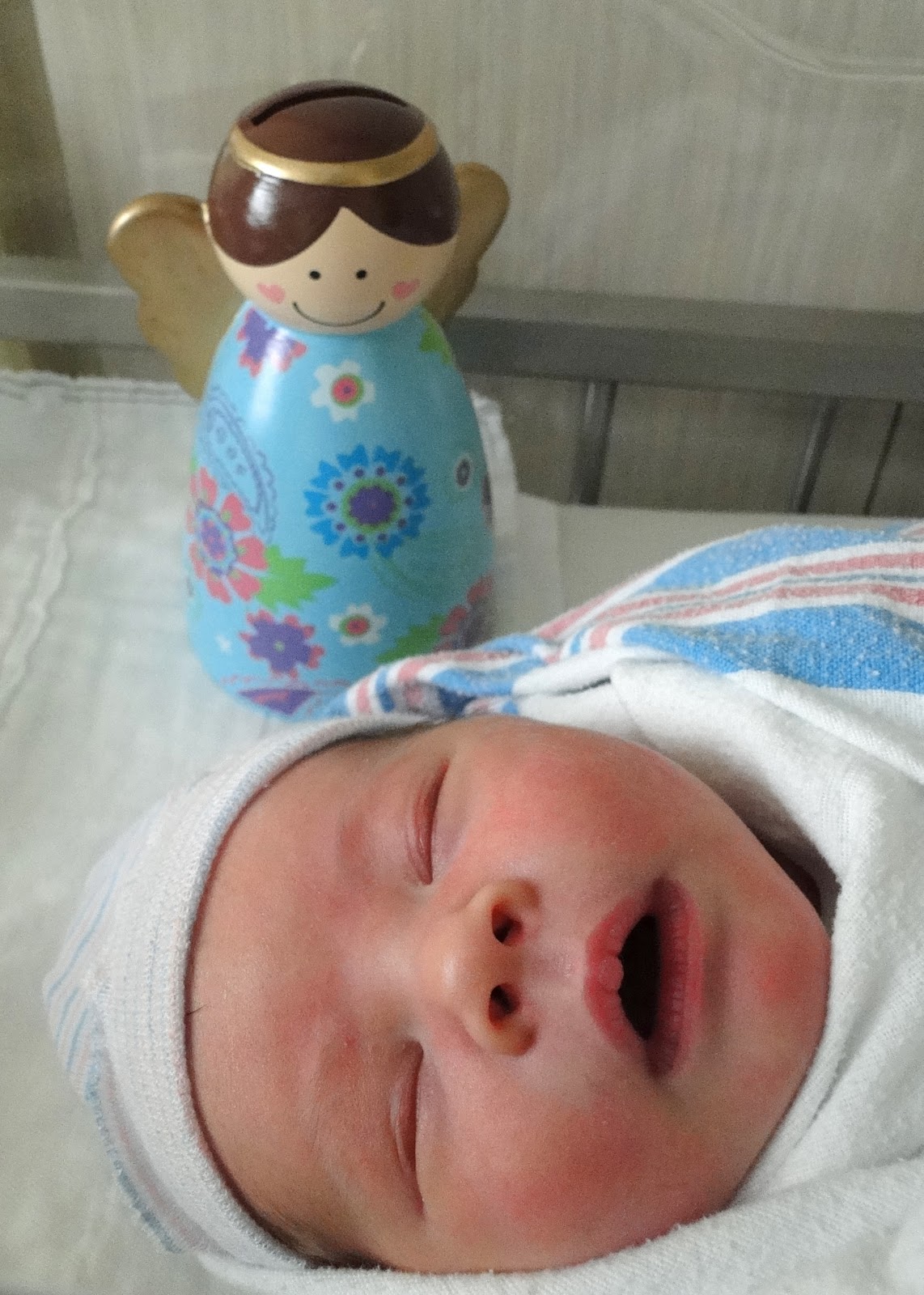 With Kye, we used the outfit we picked out prior to his birth for him to wear in the hospital and for the hospital photo shoot. With her, we didn’t want to wake her when she was sleeping so we didn’t bother changing her clothes and told them we did not even want a picture. Who buys them anyway?!? I think I got plenty of cute ones on my own 🙂 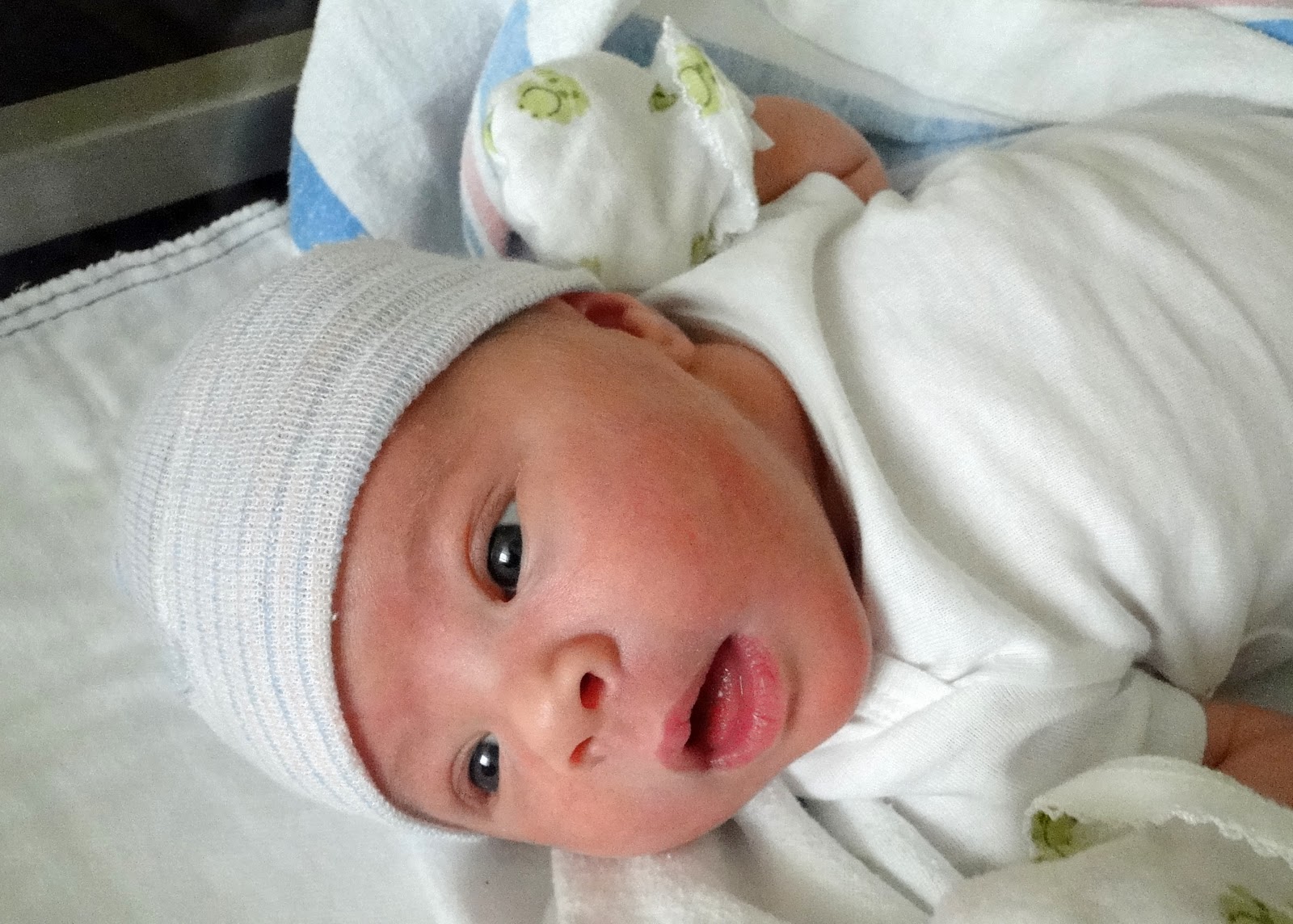 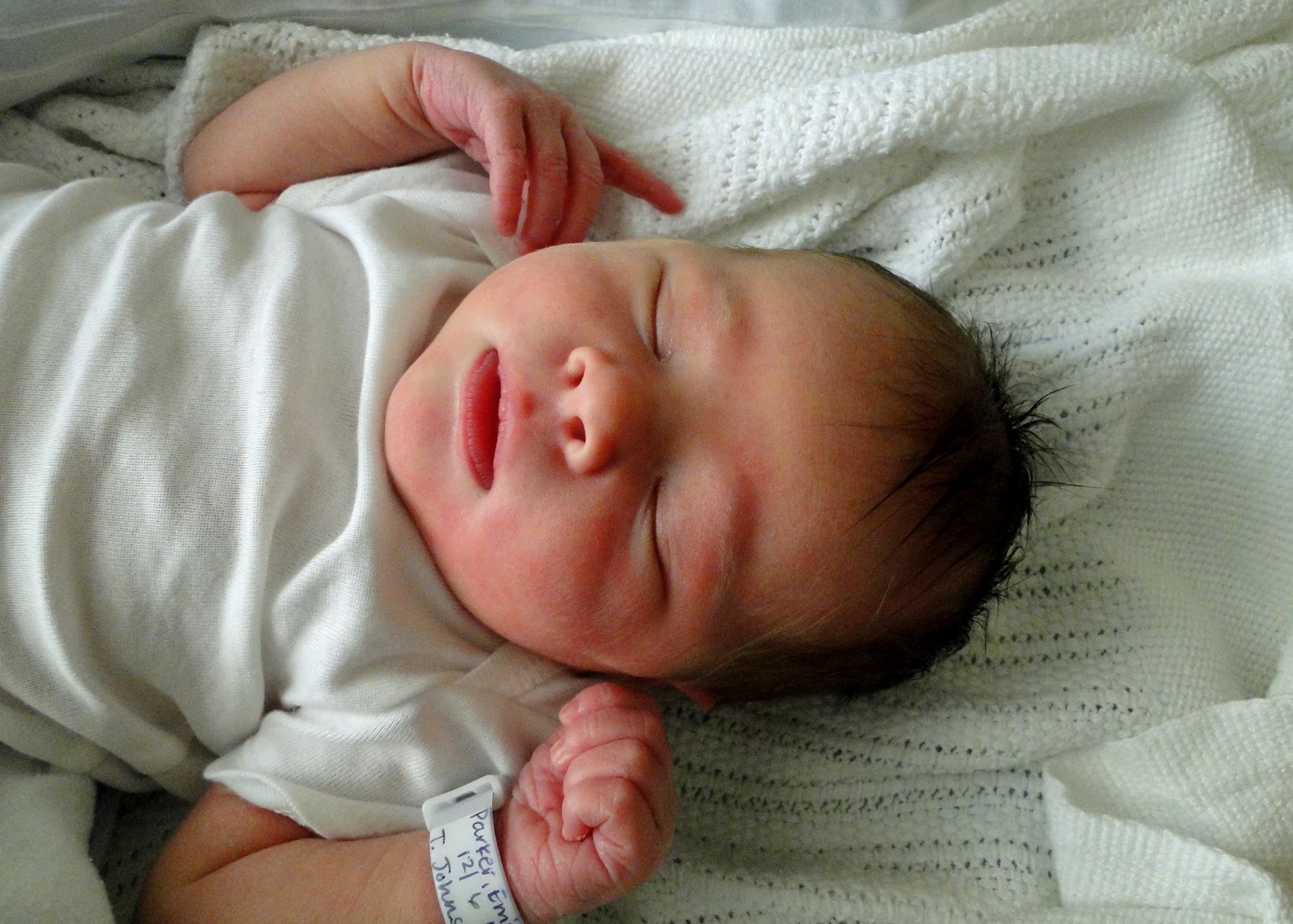 Here’s a video of my sleeping beauty 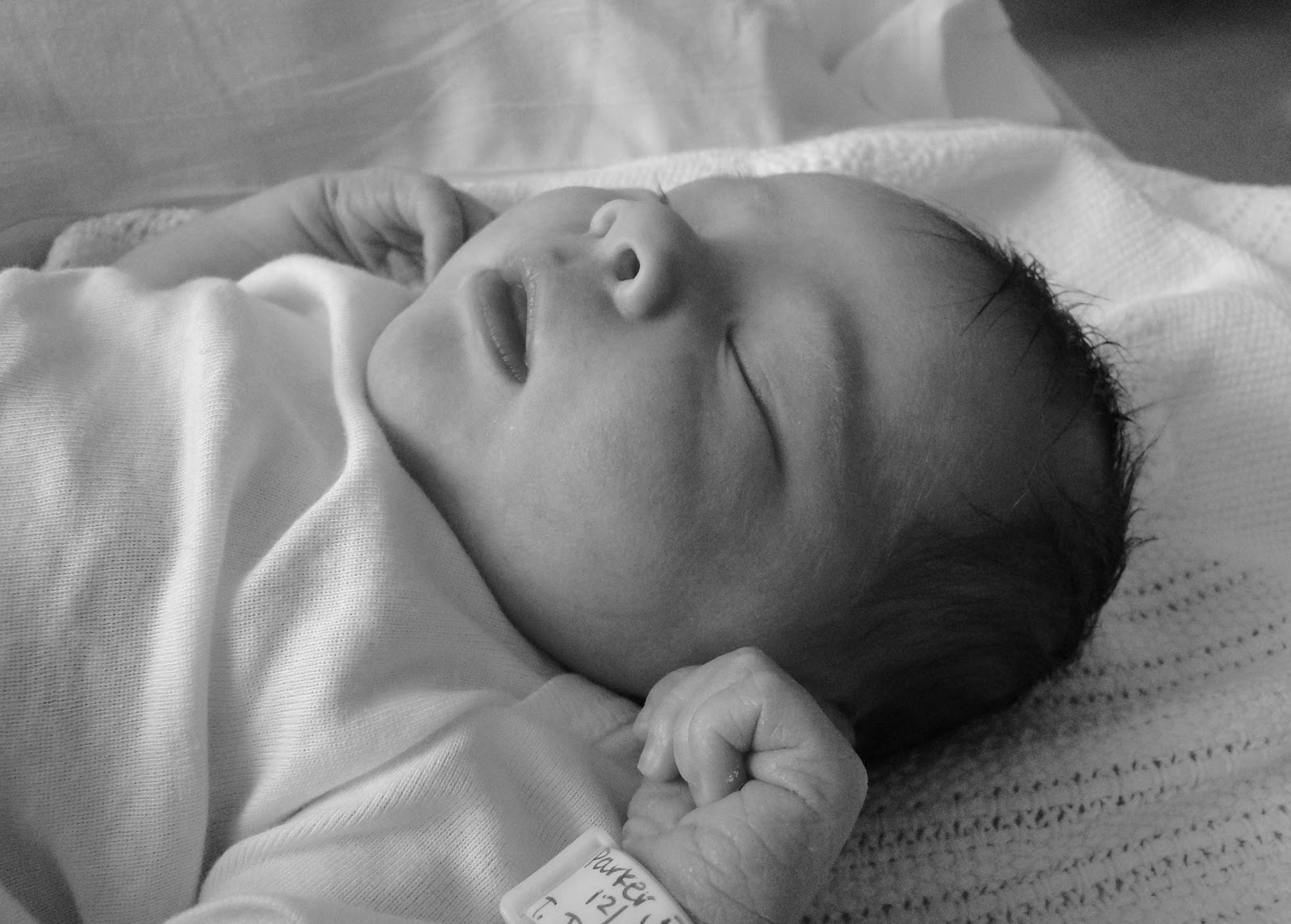 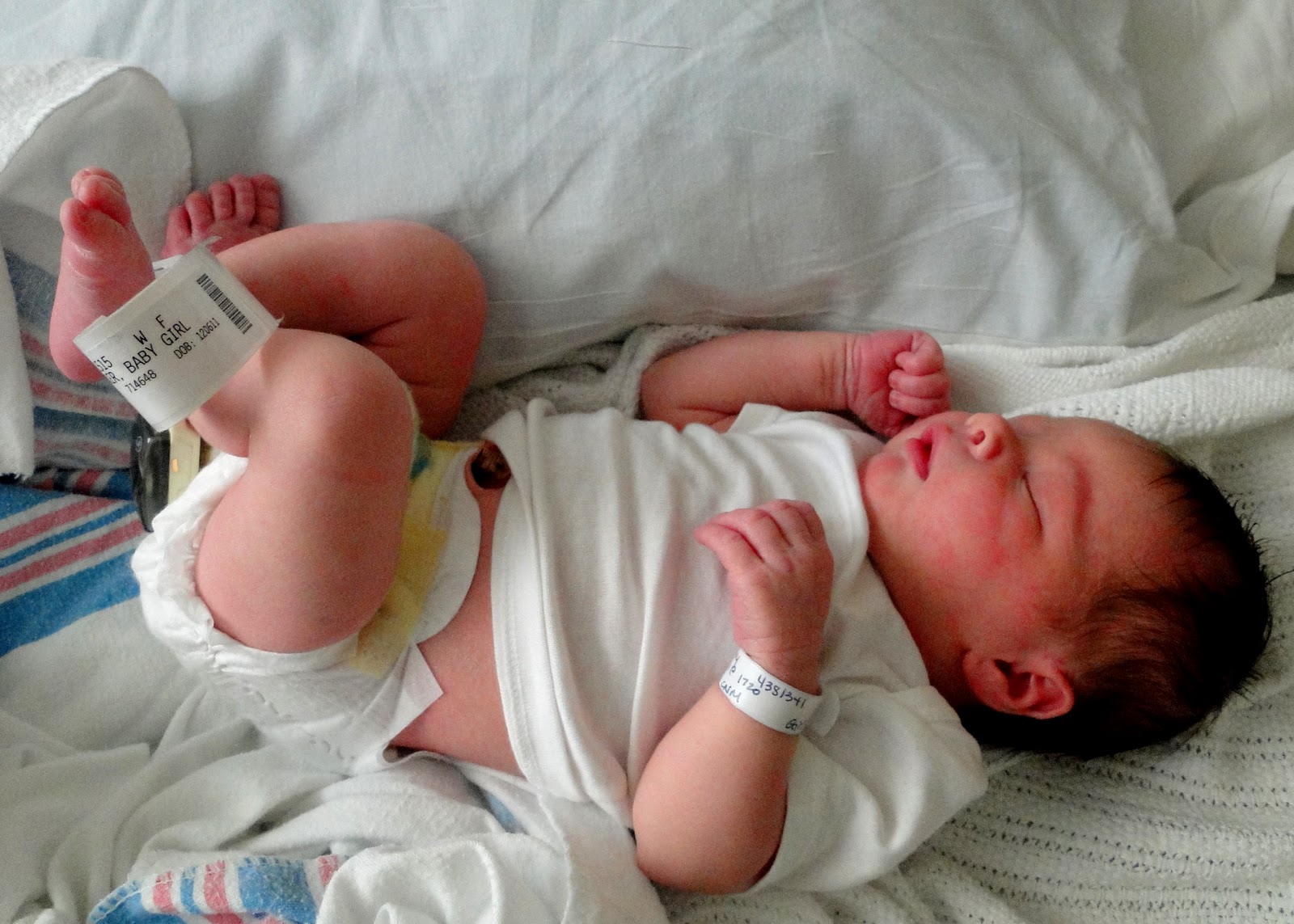 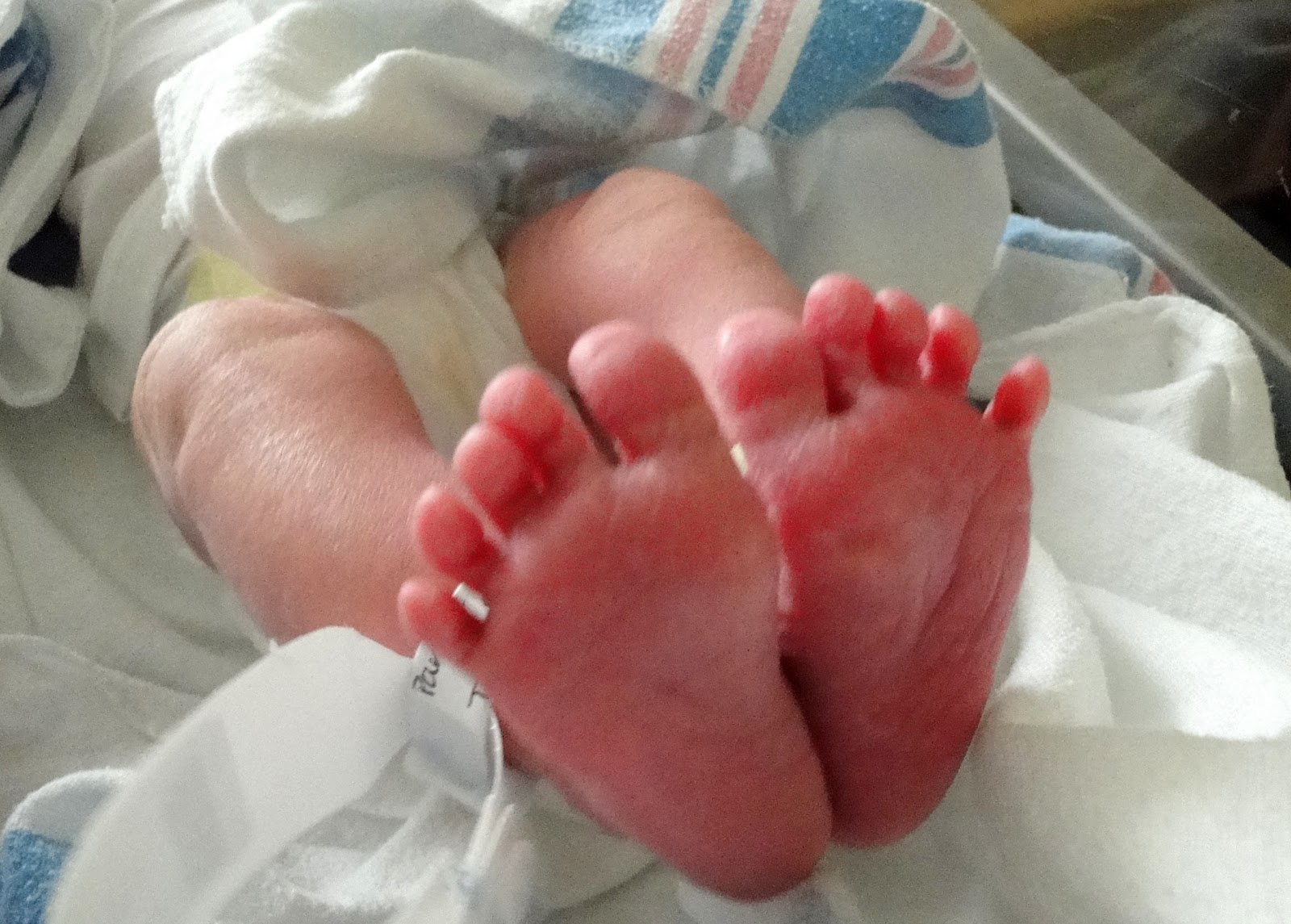 When Kye was born, I didn’t change a diaper for almost the first two weeks (Zach was awesome at helping since I was a nursing machine!), with Brittlynn I changed a diaper on her second day 😉 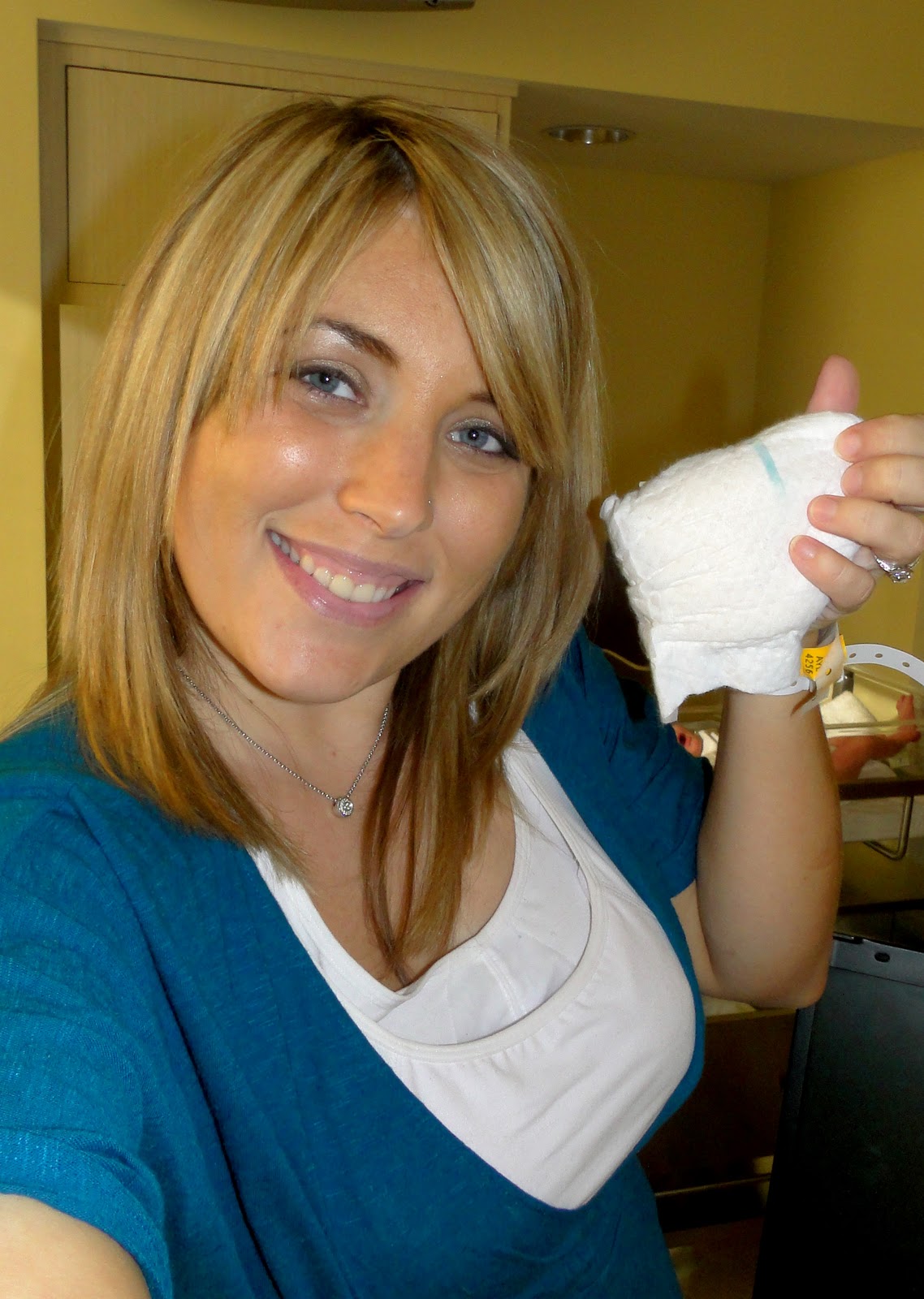 Here’s my post on my hospital stay with Kye (it all fit on one post since I only stayed for a total of 24 hours!) Up next, Brittlynn’s homecoming!