Typically whenever “the crud” goes around I’ve never really worried about it. I swear we’re like super-human around here about how rarely we get sick. Zach and I don’t get sick often and Kye’s never had anything more than a cold. A couple weeks ago I heard Kye coughing in the night and ended up going in his room (rare for me!) to give him some cough meds (C-Phen drops). I didn’t worry too much about it but Thursday (Feb 3rd) he woke up after a night of coughing and I decided to take him to the dr. I guess it’s a mothers intuition moment b/c I pretty much avoid the dr office at all costs. But something in me just said to take him. I knew Friday I planned on having him go to Mrs. Charlotte’s so I could get my hair done and go to the dentist then Saturday was Lorelai’s party and I didn’t want to risk him getting worse and not being able to take him until Monday. So off we went.

It was CRAZY how insanely packed the walk-in clinic was. I got there right when the opened and the waiting room was maxed out. EVERYONE was sick. As I waited to see the dr. I could visibly see my child getting sicker. It was so sad. We got his stats done (weighed 28.8lb and had a temp of 100 which is a fever for us as we all have very low natural body temps) and while we waited in our room he broke down crying just begging to go home and go nite-nite. It was pitiful.

The funny part of the morning was when the dr came in to see us. Turns out he’s read this little blog of mine and asked me not to talk about him on it!!! Is that not hilarious? Kinda funny to think that I’m getting people asking me not to talk about them! So from now on when he visits the dr I’ll simply refer to whoever he sees as “dr” and no names will be given.

While in his office Kye’s breathing got very fast and his heart was beating out of his chest. The did a flu test on him (where they put a q-tip in his nose and test his snot) and YUP. He had the flu! Kinda shocking because I didn’t really think he was showing flu symptoms when we were at the house. The dr said that I had caught it very early and that I would be getting it next (awesome). He said to treat it that he’s give us a prescription (for that t word flu medicine and some cough meds and he said to give him motrin to ease the fever). He also said to give Kye LOTS of liquids and not to really worry about him eating.

I really, really love the dr we saw and he always sits and talks with me and gives me great parenting tips. Some advice he gave (that he’s remaining anonymous on!): 1) pedialite is an over-priced unnecessary thing for children Kye’s age and that plain Gatoraid will work just as well 2) the gummy vitamins are a JOKE and contain no iron which kids really need so the best vitamin to give your child is the chewable Flintstone ones like we grew up taking 3) this years flu shot didn’t really work (I’m so glad I don’t bother with that junk!) and the best way to prevent the flu is to use ivory soap and put it in your nostrils then rinse it. He said he’s around sick people ALL day yet never gets the flu b/c he does this!

After leaving the dr (and spending $90 – $35 for the visit then over $50 for the meds..are you kidding me?!?!) we headed home for DAYS of movie watching. Ask me some Toy Story trivia, I know it ALL. I enjoyed the cuddle time with him though and he took full advantage of it. I remember growing up and being sick that my mom would make us a bed on the couch and let us watch tv all day. I LOVED it and I hope it’s something that gave Kye as much comfort as it gave me.

on day 1 of the flu I totally broke rules and let him have his monkey to rest with (no pacis though!) 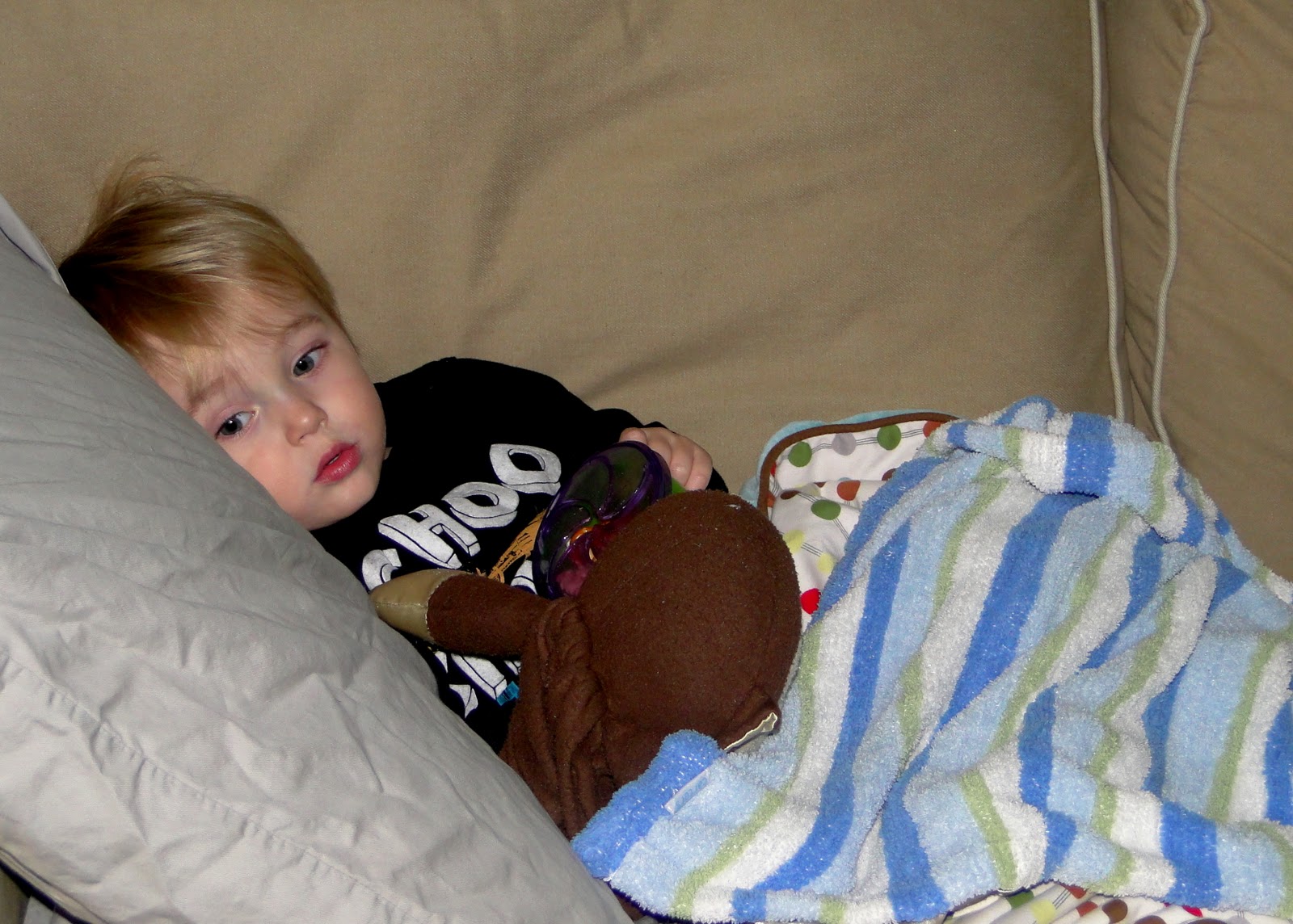 I’m impressed with how awesome Kye acts when sick. I think he’s similar to me. When I get really sick I’ll cry super easy and just need a lot of comfort but otherwise will act like me. He’s the same way. He was more sweet and loving, quicker to get upset, but still himself. Even day 1 of the flu I walked in the room to find him sportin’ his necklaces and watching tv on the coffee table (no spankings were given on day 1 but he was made to get down) 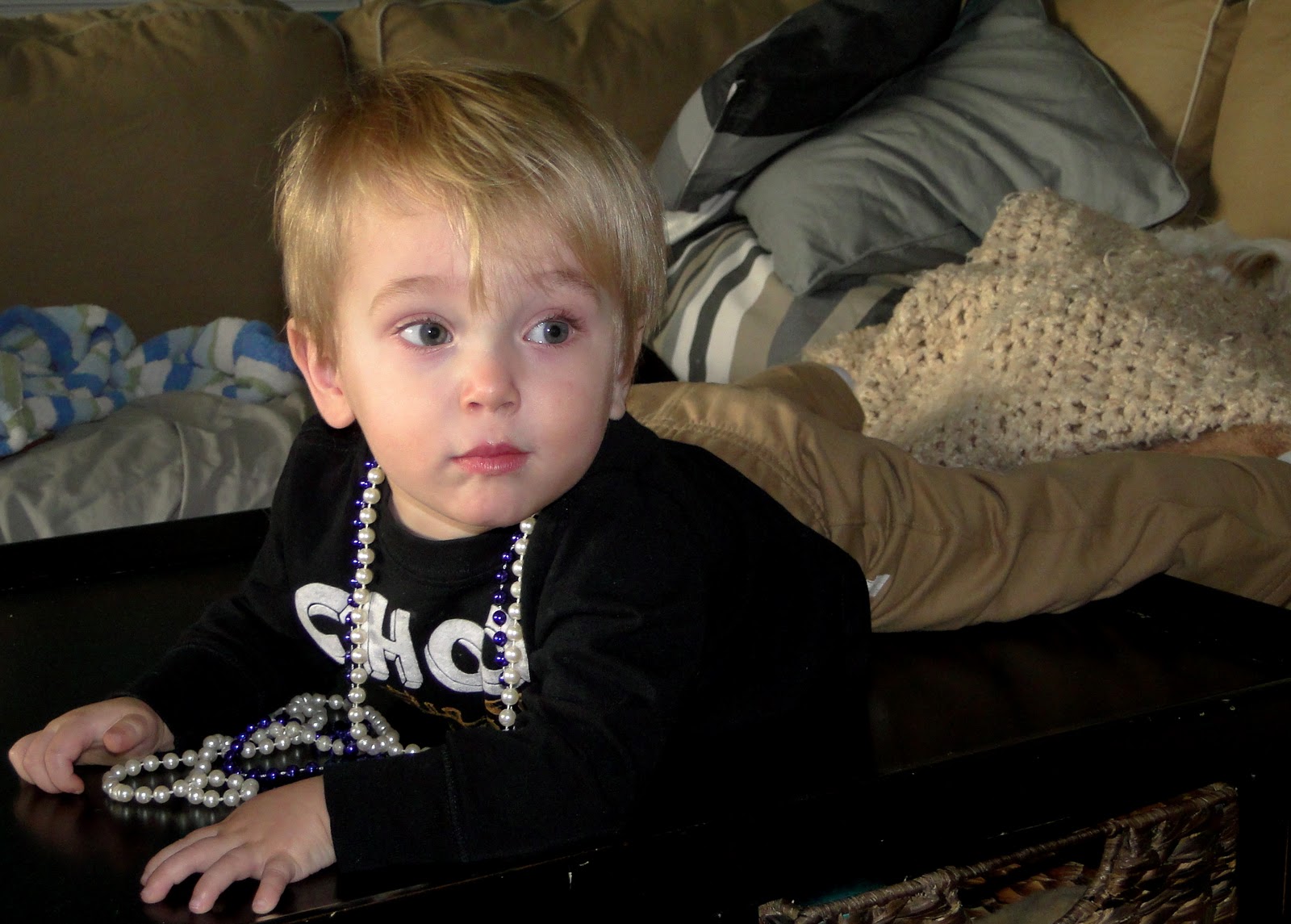 By Day 2 he was acting much better. He didn’t want to drink though and his tee-tee was very dark yellow so I gave him juice for the first time in his LIFE. I mixed 1/3 motts medley (has veges in it! yay!) with 2/3 water. He downed it and it really helped him use the bathroom more often and to flush it out of his system. I don’t want him to start asking for juice though so I told him it was special milk for when he’s sick. 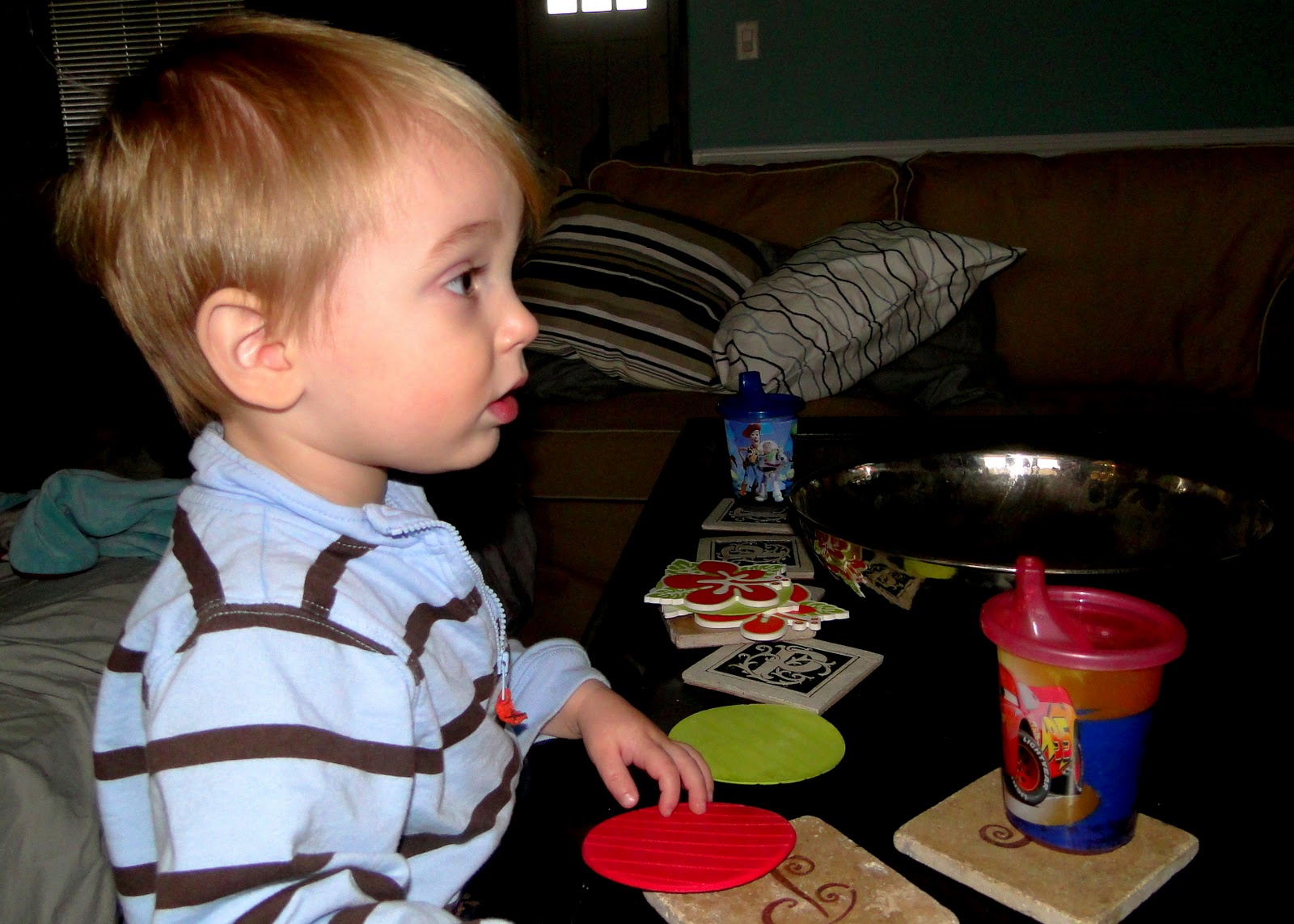 He NEVER wanted to stop watching tv. We watched an average of 4 disney movies a DAY. Isn’t that nuts? When we went to break him of the habit it was tough for him. I feel like it’s a little unfair to not let him watch movies other than when he’s sick or special occasions but he got back into the routine of no-movie watching within a day or two. 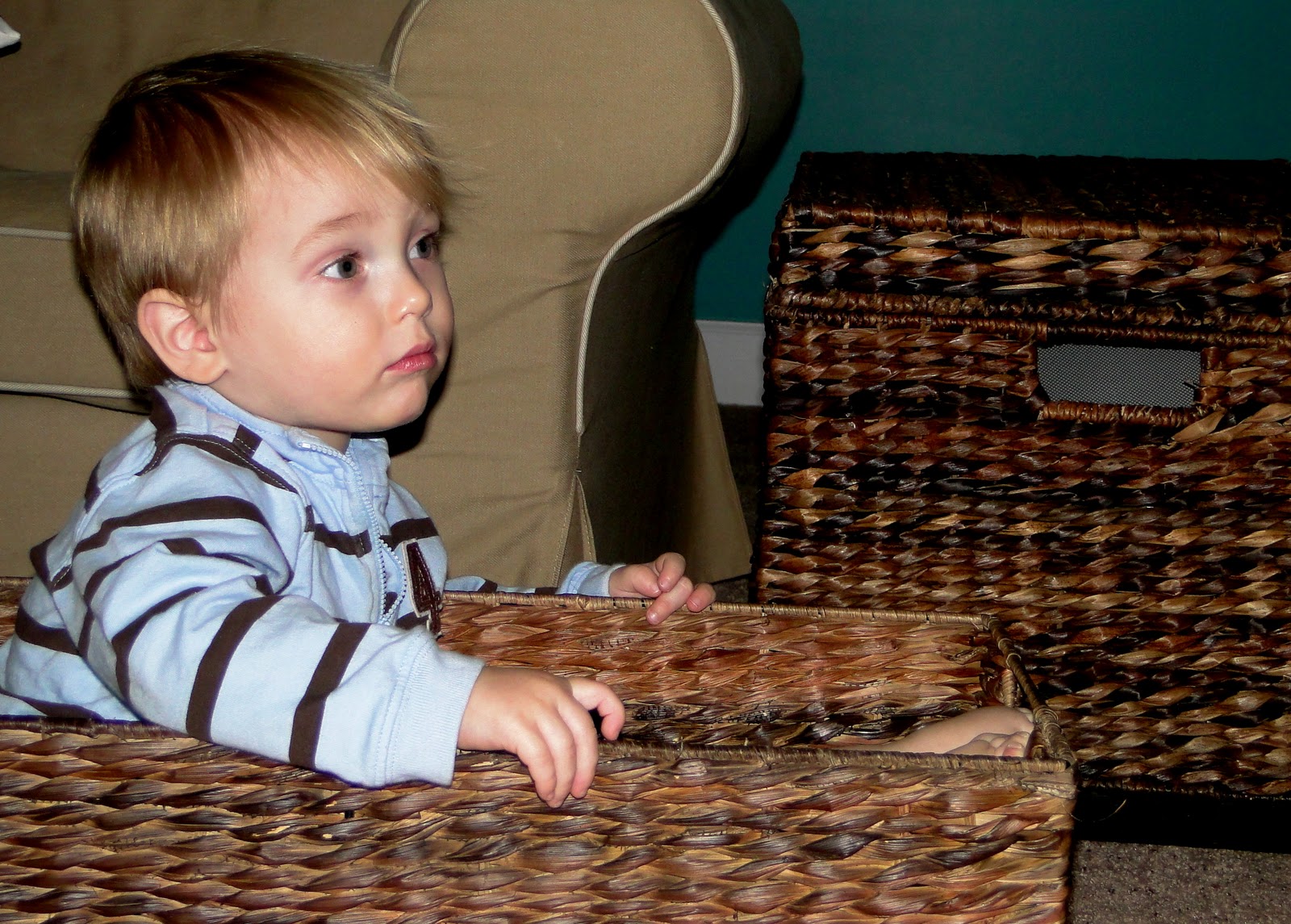 He still did great not having accidents while he was sick. I was a little nervous about that because I’ve heard that sometimes sickness will make kids regress. He did poop in his diaper once during naptime which he hasn’t done in AGES. It was not a super solid poop either so I think it was all the meds. 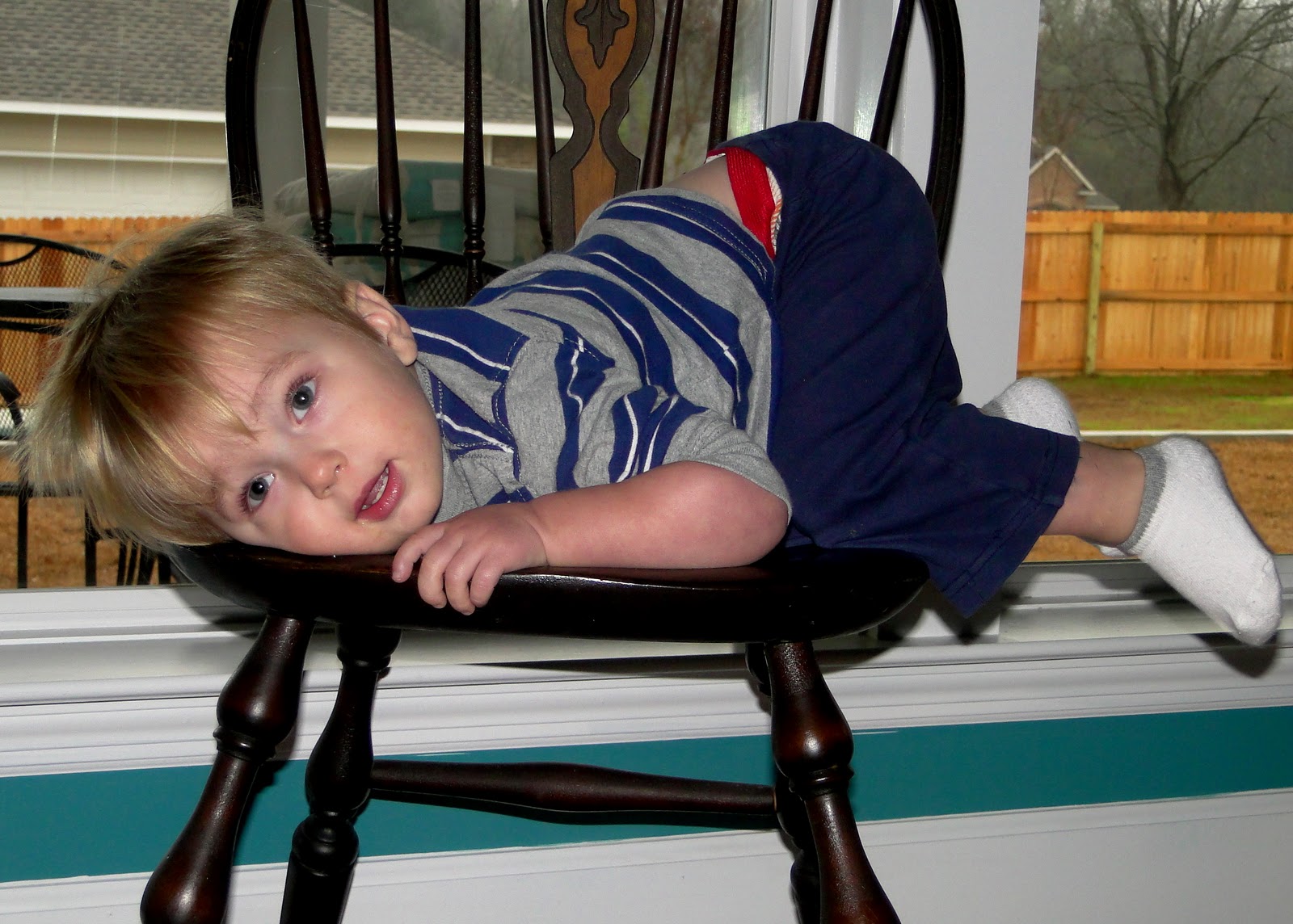 We got on a good medicine routine and he still does great taking them. He said “no no mommy no medicine” but would still take it like a champ and didn’t pitch a fit about it. I can’t stand medicine so I’m impressed by this. He understood that it helps him because he’d point to it on the counter and say “medicine for cough.” 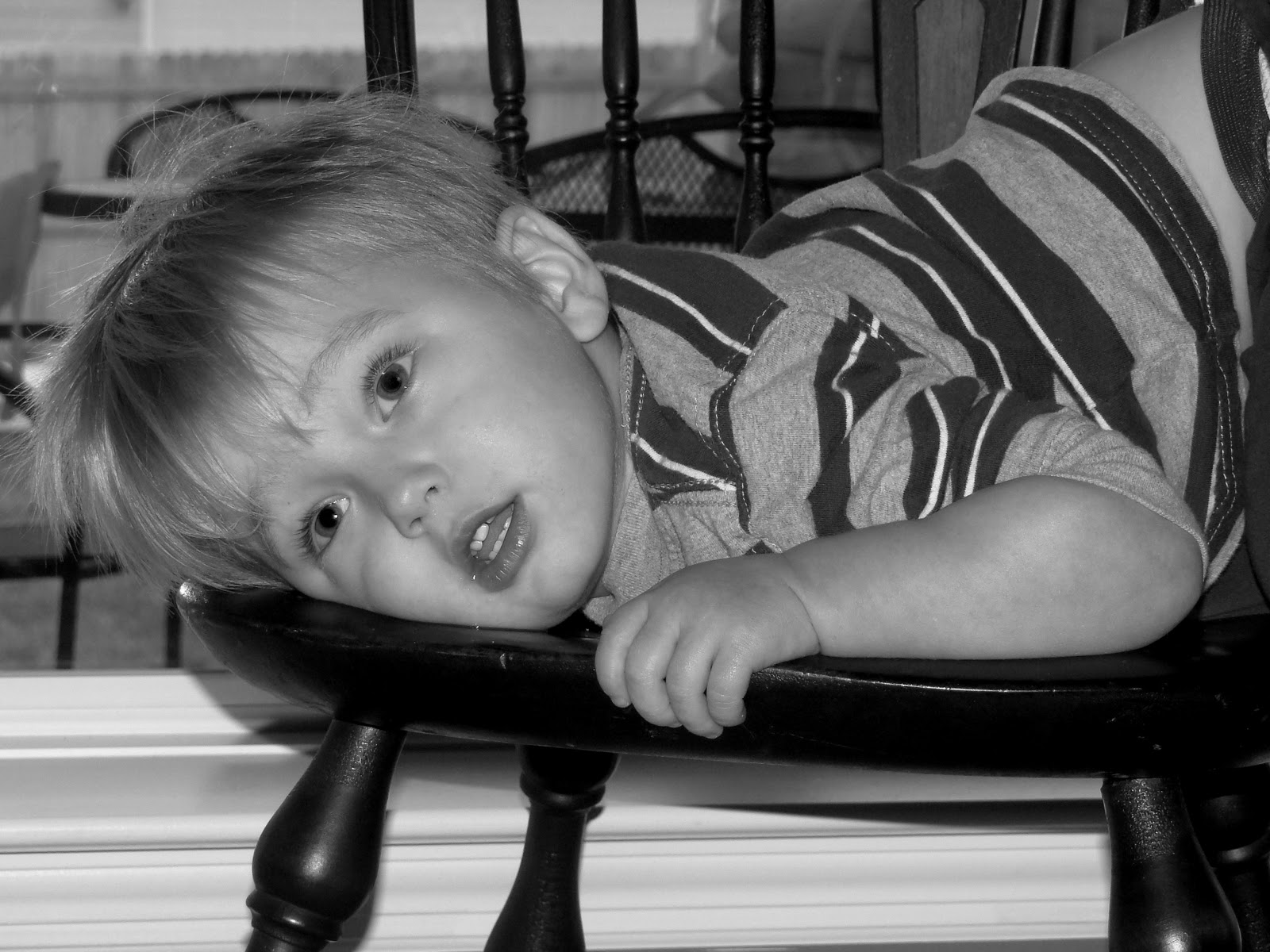 I ended up rescheduling my dentist and hair appointments for Friday and we just stayed inside ALL day. By Saturday I started not feeling so great but I didn’t want to miss Lorelai’s party so I pushed through. Kye was still very weak and not 100% but after being on medicine for 48 hours without a fever we knew he wasn’t contagious and Robyn said she felt fine with him coming to the party. On Sunday I felt much worse and didn’t want to risk Kye getting sick again or myself getting someone else sick so we stayed home for yet another movie day. I do think we actually got the flu from church. The Sunday prior I kept the nursery and Kye “helped” me so I think that’s when we got it because SO many people from church got sick at the same time we did. 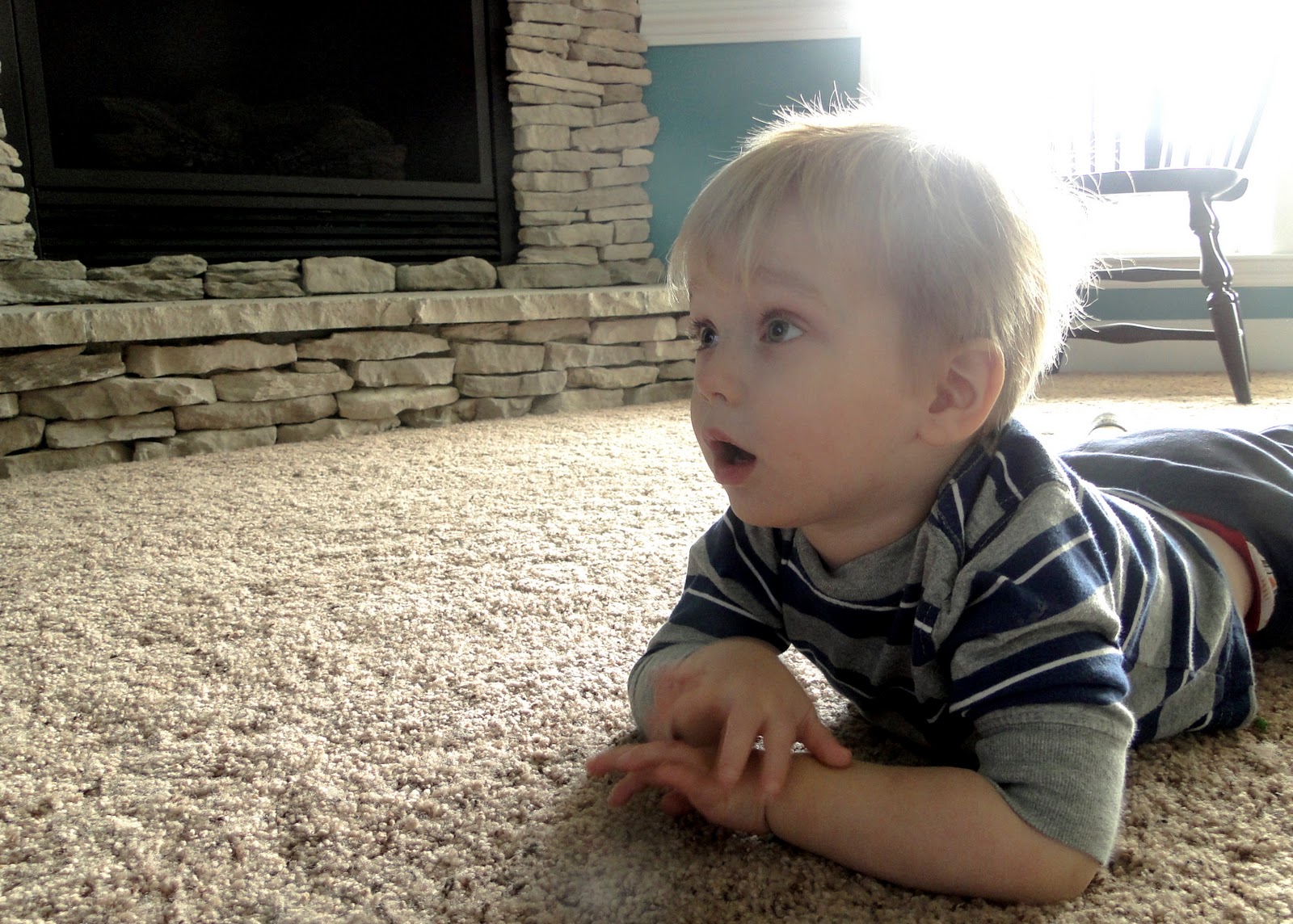 While being sick and having a sick child isn’t fun, I do think it’s good that he’s been exposed to the flu. I’m a big believer that the more we’re exposed to the less sick we’ll get from those things in the future. With preschool in the fall (post to come!) I KNOW he’ll be getting exposed to a lot more so at least we’ve been through this once and know what to expect! 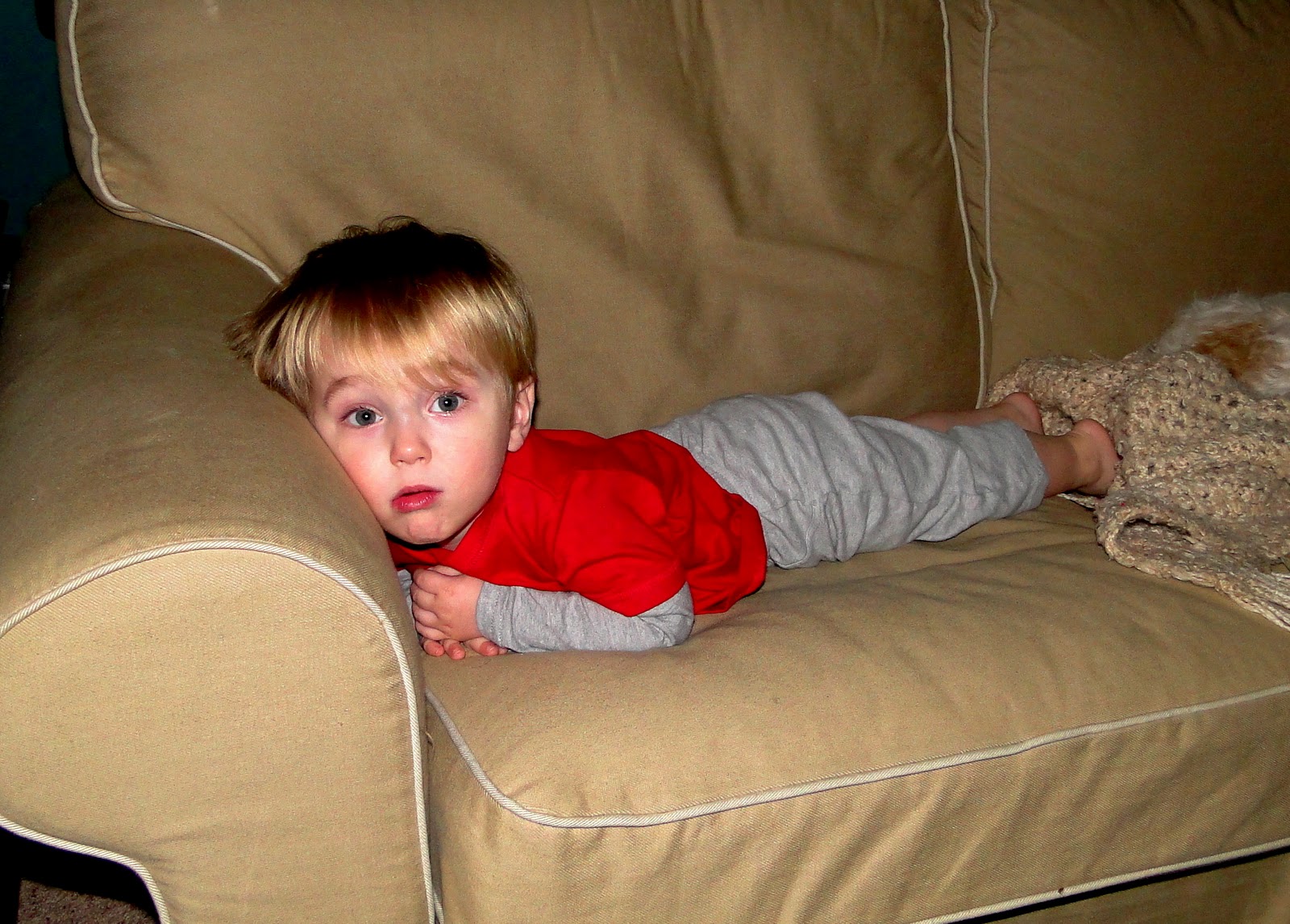 While I enjoyed the cuddle time and the sweet sick boy (don’t all moms secretly kinda like it when our kids are sick? They just LOVE us more!!!), I was SO happy to see him turn the corner and start to be back to himself. At this point he’s 100% fine. I still have a sniffle or two but feel fine and now it’s Zach’s turn to have it…hopefully it’ll be completely out of our house soon!!! 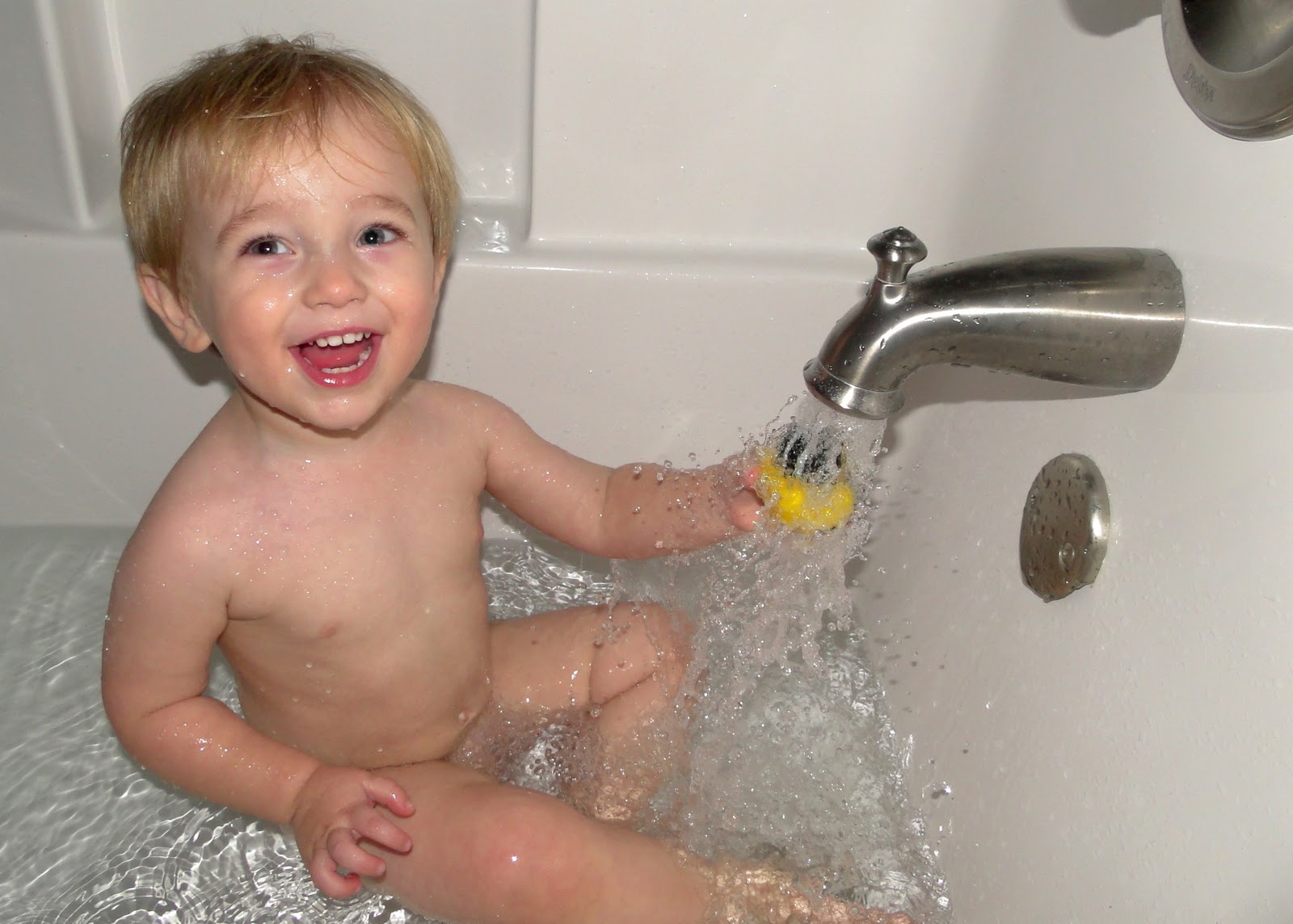 Hope everyone else is getting over this junk too!!! What’s your get-well routine?