Kye is such a big boy now eating solids in his high chair! We have a nice little routine (shocker) where he nurses, we cuddle (if he’s in the mood…), then I put him in his high chair to play while I get his food ready. I make him 1/4 cup of rice cereal (mixed with 1/4 cup of pure water) plus he eats 1/2 of a little tub of the Gerber 1st foods. Yes, he eats THAT much! Since he only gets veges at 2 meals a day (7 am and 11 am), then doesn’t eat solids at all at 3, he pigs out at 7 pm! We typically have to give him MORE rice cereal than 1/4 a cup! One night he ate about 3/4 a cup! While he’s eating I sign “more” before almost every bite and I sign “all done” when I can tell he’s full. You know he’s full because he’ll a) quit opening his mouth b) start whining c) start misbehaving (making raspberries, putting his hands on the spoon, putting his hands in his mouth. After he’s done I wipe him off and give him back the toy. I LOVE this toy!!! It’s by Sassy and it suction cups to the high chair. Kye loves it and therefore I love it too 😉 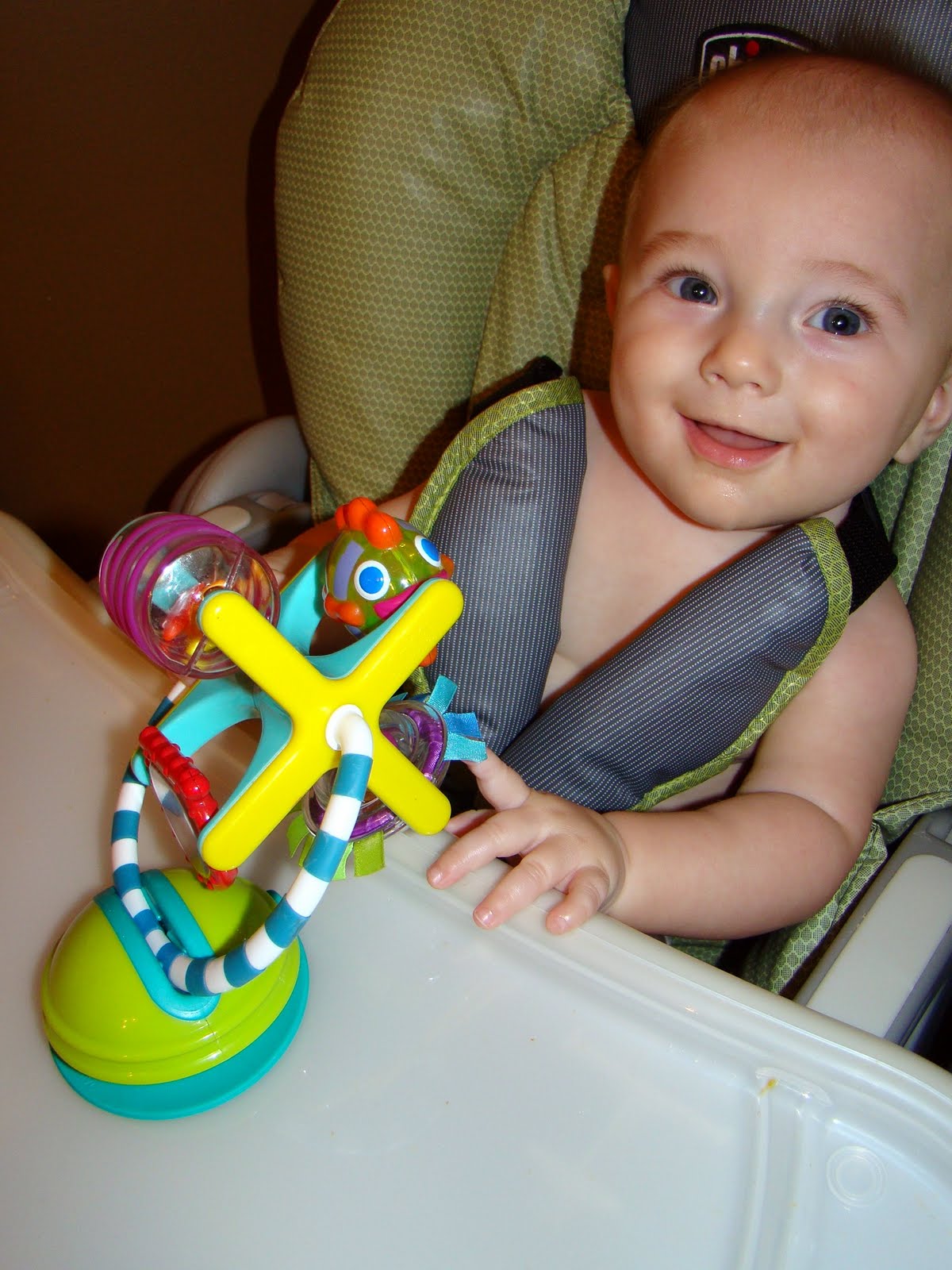 Back on August 24th I gave Kye his first taste of real food (rice cereal doesn’t really count in my book!). Although I’ve read a million different things about what is the best first food, I decided to go with green beans. My gut said green beans and I believe that sometimes we should just follow our guts 🙂

Kye never really has liked rice cereal so I was interested to see his reaction to green beans. He did great! I take a little bit of cereal and then dunk it in the green beans so he’ll eat more rice cereal as he for sure prefers the veges 🙂 I’ve continued this through all his vegetables and am SO excited to start fruit on Monday so I can mix it with the cereal! 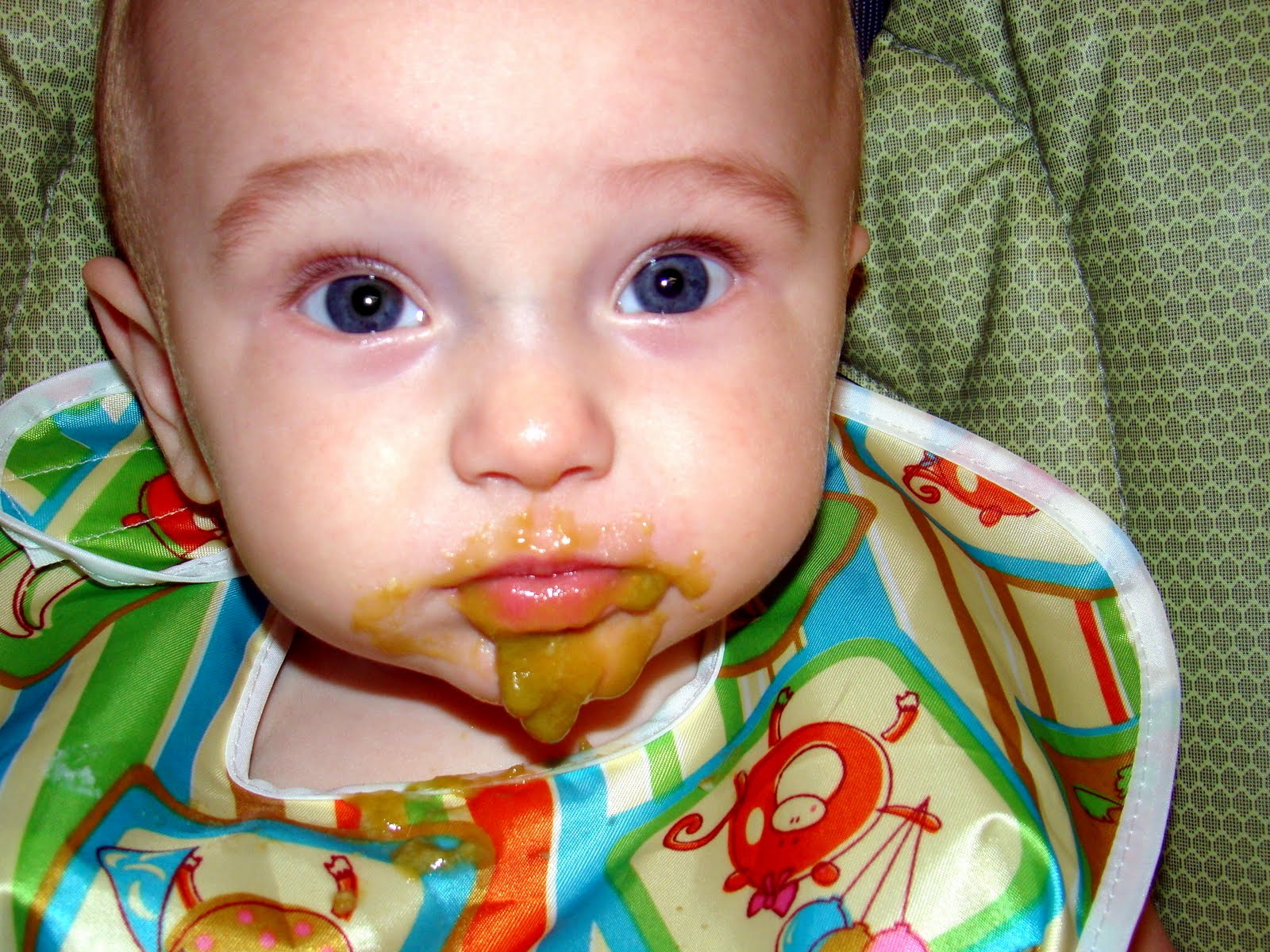 I went an entire week of feeding him just green beans twice a day (rice cereal 3 times a day) before introducing peas. He had the same reaction to them as he did with the green beans. By this point though he’d begun opening his mouth when he saw the spoon and had gotten MUCH better at our table manners (less raspberry making and hands stayed down much better).

Honestly, Kye isn’t a very messy eater and to get these pictures I had to intentionally be messy! I’m not doing a picture thing like this for fruit because it’s hard to be messy enough to get a good one :0) 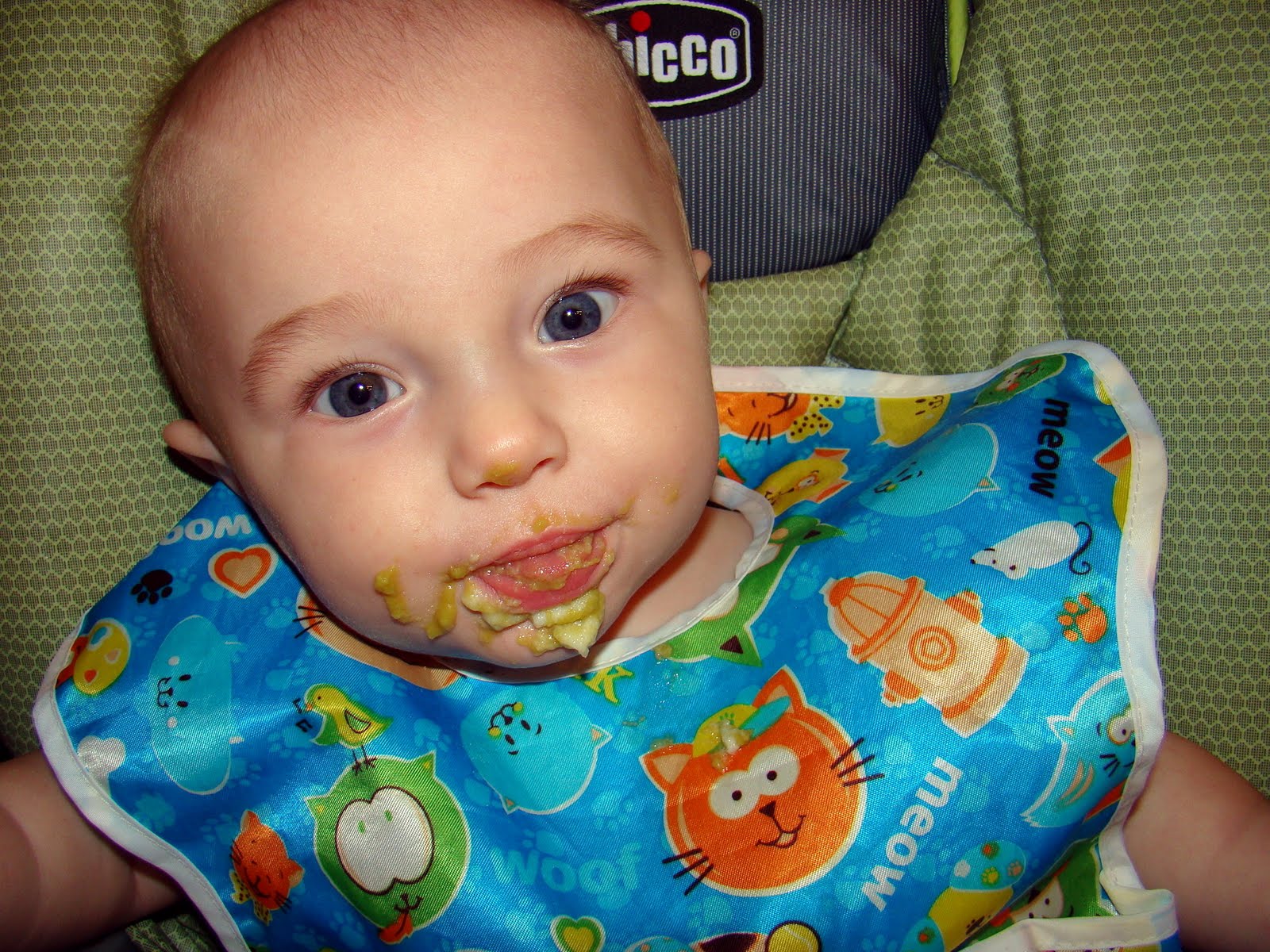 After waiting a week for the peas I realized it would take FOREVER to get him through all the vegetables if I waited that between each one! He wasn’t have any issues with the food. In fact, I think his body adjusted beautifully. His poop turned to solid poops and he seemed excited to eat every time I put him in his high chair! I decided to start introducing each new vege much quicker, waiting only 3 or 4 days between each. Here’s his first taste of orange, I did carrots 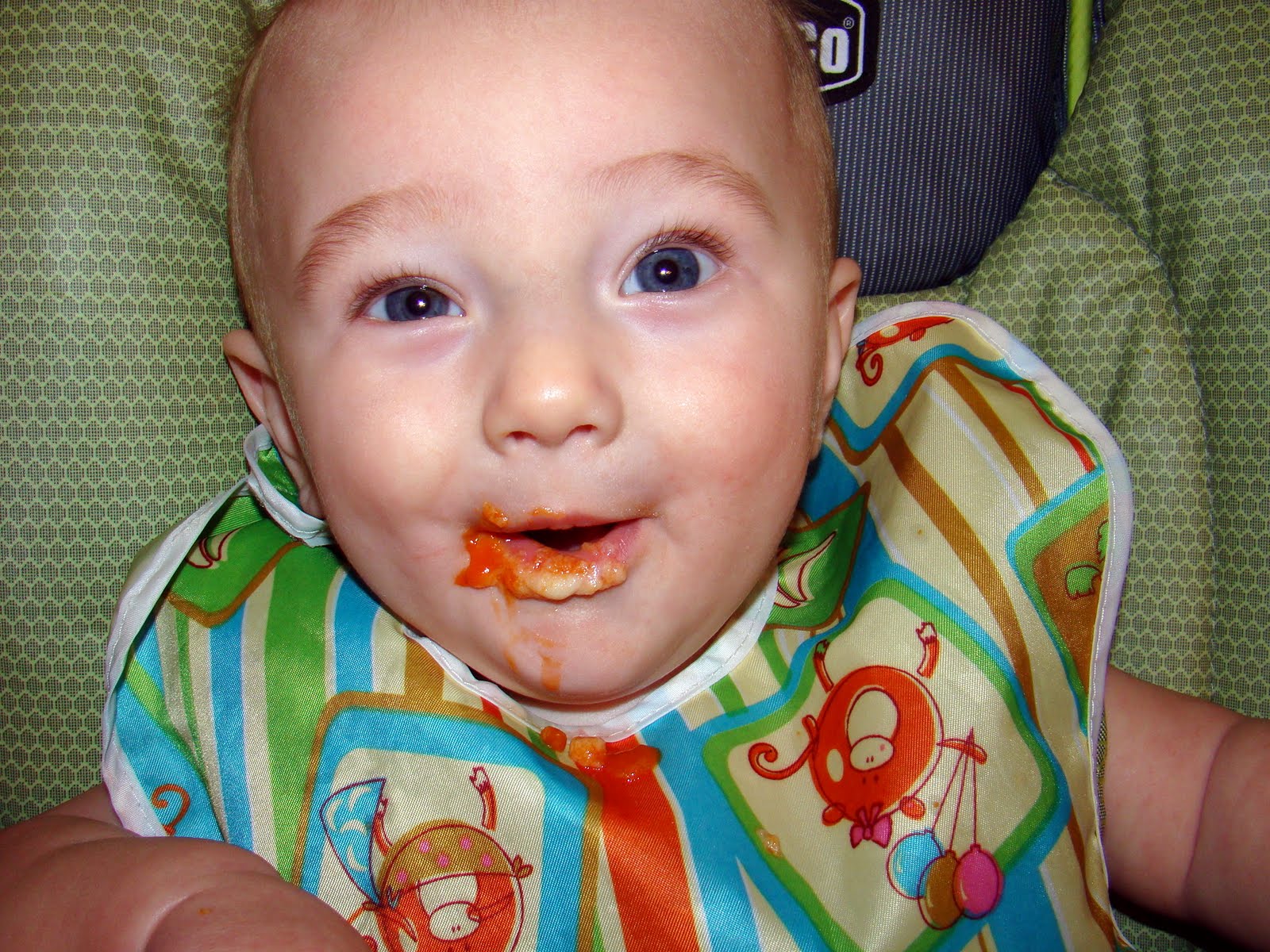 The one thing I don’t like about the orange foods, especially the carrots, is how badly they stain his skin. It’s SO hard to wipe that stuff off. And it’s SUPER hard to get it out of clothes. Any laundry tips? I ended up having to let stuff SOAK in oxy-clean, and it worked but it was a pain!

Since carrots fell on the day we left for the Labor Day trip we waited until the following Tuesday to do Squash. Again no issues! 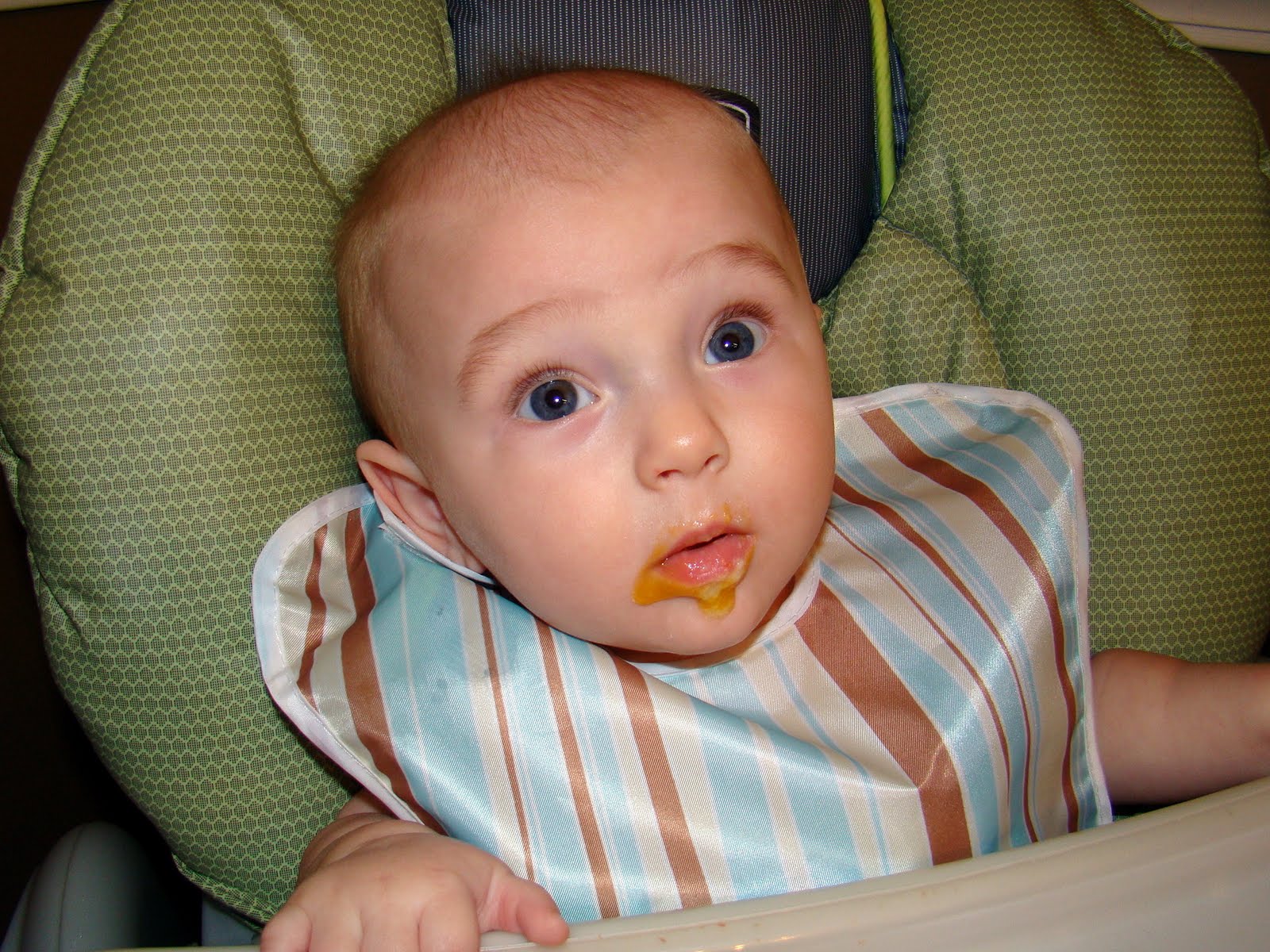 Finally yesterday we did sweet potatoes. I’ve heard babies love sweet potatoes but not Kye. I really think Kye just likes to EAT and he doesn’t care what we feed him. He likes it all! As a pretty picky eater myself I hope Zach and I can always make it a priority to feed him a variety of foods and to help him be a healthy eater 🙂 I really need to buy a book on nutrition and such as I am CLUELESS about that!!!

At this point Kye opens his mouth SUPER wide for the food and eats much quicker than he did before. I’m eager to start fruits and then stage 2 foods! I have also read that some babies can do finger foods at this age and I may start him on some of that. Any tips with that kind of thing? I am not big on snacking but I wouldn’t mind it if Zach and I ate dinner at 7 (after I nursed) while I fed him the baby food then he had some finger foods to eat while we eat. It’s hard when he’s done eating and then WE go to eat and he’s seeing our food and wanting some ya know?

Here’s my little man eager for the sweet potatoes (and yes, I made him put those hands down!) 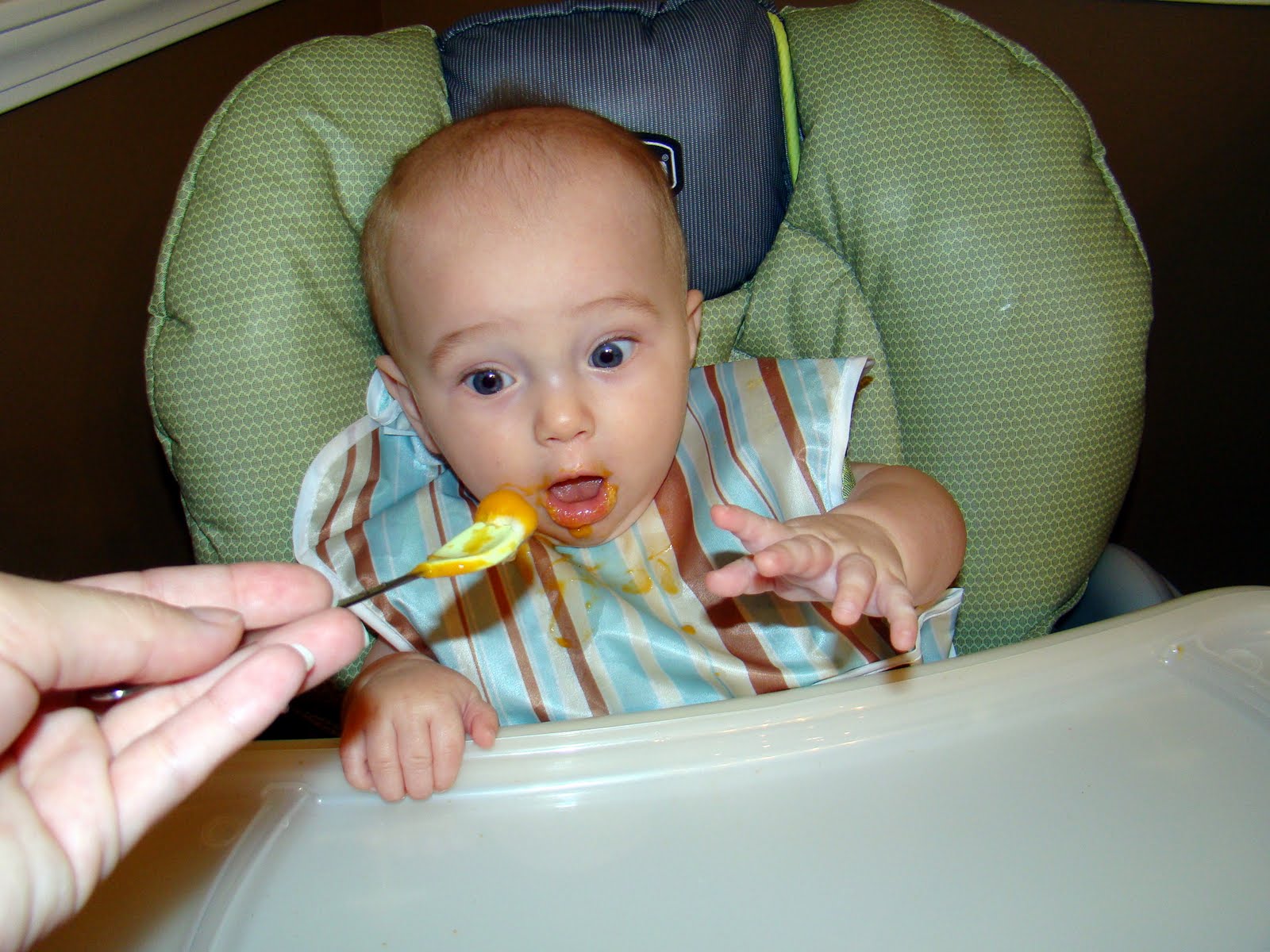