When a child turns one soooo many things just seem to get easier. Whole milk – much less stressful than breastfeeding or even formula feeding. Naps and night time sleep – still vital but if you’re a few minutes late putting them down or early getting them up it doesn’t seem to phase them as much. They become easier to communicate with, to understand their needs, and more fun to play with too! They seem less breakable, funnier and somehow more human.

To me, there is one thing that has gotten more stressful with the age of toddler…food. Even though I’ve been feeding Kye “real” food for quite some time I never had to stress about it. Everything you read constantly reminds you that for up to the first year the breast milk/formula is ALL your baby needs for nutrition. After that though, it’s up to YOU to make sure they get the nutrients they need. It’s stressful. As a life-long picky eater I want to do my best to get Kye to not only eat healthy but enjoy healthy foods. It’s my personal goal. I also feel very strongly that as long as I control what he eats then I should make sure he’s eating the healthiest things he can.

Am I a freak about it? No. Sure my kid eats hot dogs now and then. Sure he eats dessert with us if we’re all having a little treat after dinner. And no, I’m not one of those omg-if-it’s-not-organic-then-it’s-not-entering-my-child’s-mouth moms. I wish we could afford to be more organic. I think that a LOT of the organic thing is bogus and used for a marketing tool but I FIRMLY believe that majority of the health issues we have today come from the processed crap we eat. Like my mom said, everything naturally from the Lord is good…stuff that humans mess with is the stuff to avoid (which is like EVERYTHING!). I do try to buy organic, when available, on the items from the Dirty Dozen list. 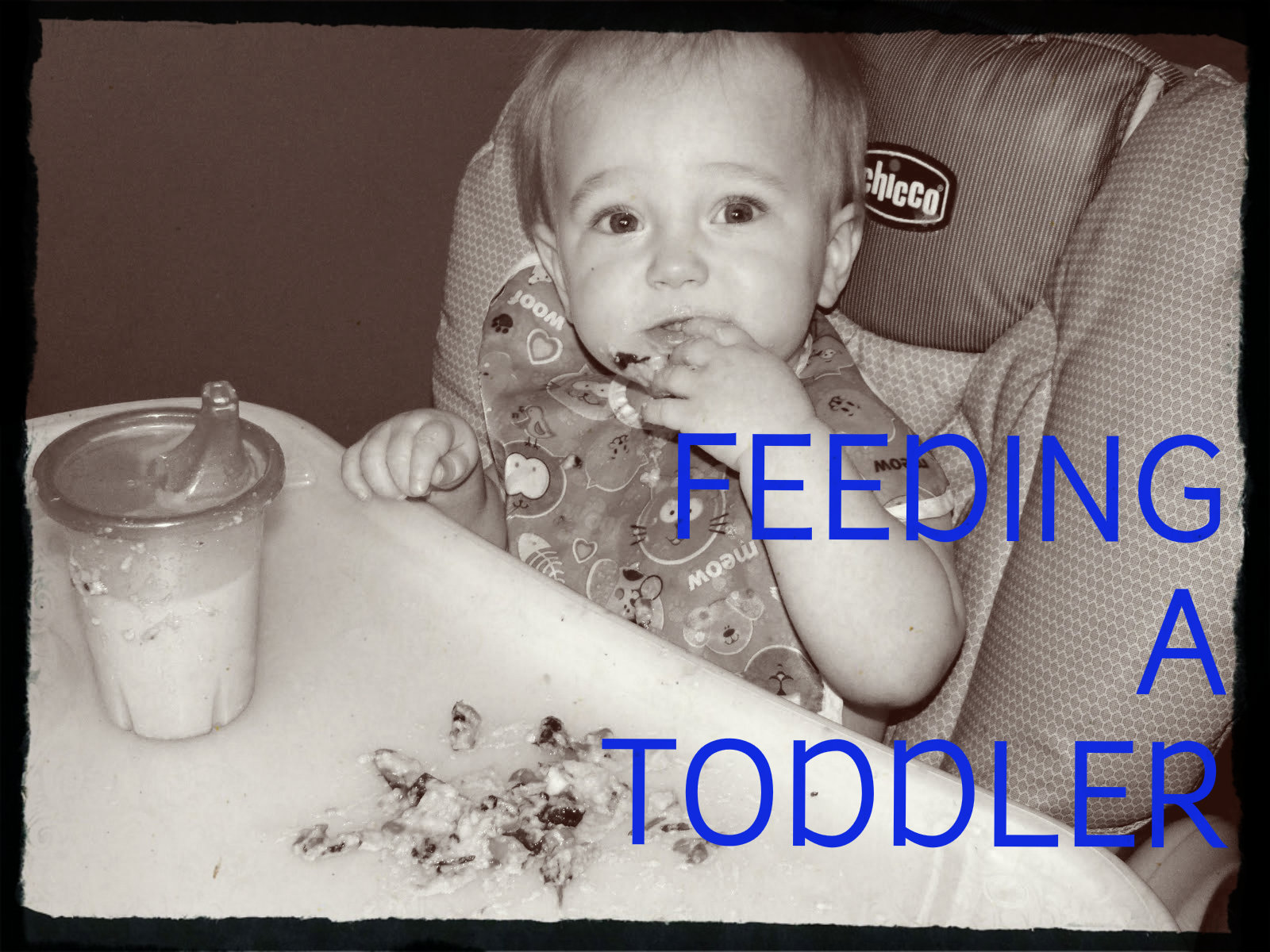 When Kye first became a toddler I had the HARDEST time finding a food pyramid for that age group. I wanted to make sure I did my best to get him to eat as close to as recommended as possible but there really isn’t a set pyramid for this age. Grrr. I’m big on trusting resources and one that I trust is Wholesome Toddler Food. Here is their link to what a toddler needs to eat. I combined this resource with what I read in Baby Led Weaning

and I feel confident in going by this “pyramid” for Kye’s nutritional needs. A serving size for ANYONE is an amount that fits in their palm. I consider a serving a Kye-sized-handful of whatever the food may be. (you can also assume 1 tablespoon per year of age is about right). This list is my own in order of importance and I go by this everyday when I decide what Kye should eat.

I do this order because Kye likes green veges the least and in my efforts to get him to eat them I end up using breads and meats to “sneak” them in so I know that if he gets enough green veges then he’s getting enough grains and proteins. He also loves milk and dairy products so that’s easy and he will eat fruit until he pees pulp-free juice if I let him! Color is important to consider as well (notice I break up veges into “orange” and “green”). I try to give Kye a variety of color in his diet and try to give him some purple fruit everyday!

With the toddler years also comes independence, and Kye is starting to make choices on what he likes and doesn’t like. My former butter bean king now won’t hardly touch a green vegetable. I make it my mission each day for him to get the green veges he needs and I’ve worked very hard at finding creative ways to “sneak” them into his meals. Growing up a picky eater my mom had to sneak in nutrients every way she could and she would make “Magic Malts” that were a mixture of orange juice, bananas, and green beans. She was the original Sneaky Chef

! I have NOT purchased any of the actual cookbooks to come up with recipes but I’ve hunted the internet and have found some really great ones. I’m working hard on my sister blog to get all of these posted for those of you who want to try them!

You all know I’m a schedule freak but I actually don’t have any exact science to what I feed Kye each day. I’m a little more easy going than you probably thought (or not?)! But here is a rough break down of what I typically feed Kye. I firmly believe it’s important to feed children only at their scheduled times as I believe having access to food all day on demand leads to obesity type lifestyles. However, I’m also a mama and when my growing boy begs for food at the pantry I am known to give him some raisins or other healthy snack to push him through to the next meal. We also don’t do juice. Kye enjoys fruit and fresh (or frozen) fruit is much healthier than juice that is made with un-natural ingredients and sugars. If Kye were a juice drinker I would not allow him to drink it all day long. Milk is only allowed at meal times but I will allow him to carry around a water sippy if he wants as I believe a love for water promotes healthier living later in life!

When buying foods for our family I do my best to get the healthiest options I can. I know companies make their products look healthy (like Gerber’s stuff says “made with 100% real fruit” so you’d think it’s healthy but in reality the product only has like 1% fruit but they can say it’s 100% real b/c that 1 percent in the product is 100% real fruit…so tricky!) and will trick us into buying things and thinking we’re doing great on the health food front when in reality we aren’t. I make it my goal to feed Kye as little processed food as possible and buy all fresh or frozen. I used to be a big canned vege girl but it’s simply not as healthy as frozen. I don’t do those little pre-made fruit cups either as they are loaded with sugar to preserve them. The fruit cups I buy Kye are FRESH fruit only!

Breakfast: Every day it’s the same. I fill his sippy up with 8 oz of whole milk and feed him my version of Mom’s “Magic Malt.” Here’s the recipe for Magic Breakfast. Kye LOVES it and as long as he enjoys it I fully plan on feeding it to him. Yes, someday he’ll be mega grossed out to think that he ate it..but here’s proof 🙂 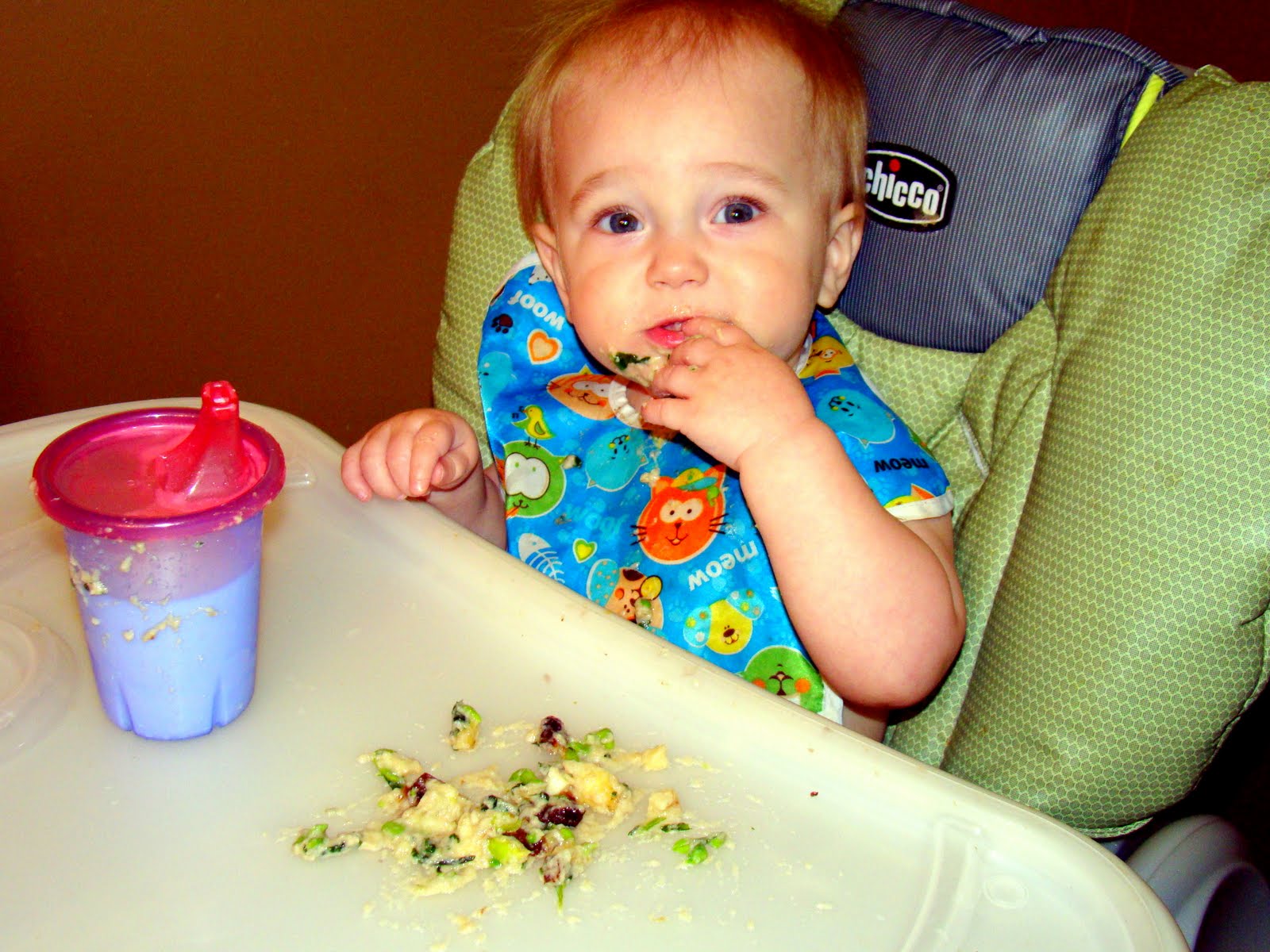 Lunch: He drinks the remainder of his milk from breakfast if he didn’t drink it all and/or ice water. We do a lot of different things for lunch depending on what we have going on. Here are many of the options we do for lunch (I may think of more and add them later):

Snack: Kye gets any left over milk (although there is rarely any left by that point) and/or ice water. Snack is still pretty big as my child just likes to EAT!

Dinner: He gets a fresh 8 oz sippy for dinner and drinks it all. We try to eat as a family as much as possible but if we can’t or we are eating on the go then I use an idea from lunch. He will typically eat whatever we eat and do fine with it. If we aren’t eating something he needs then I will feed him everything we eat PLUS whatever else he’s missing from his diet that day.  Lunch and breakfast are his biggest meals of the day which is normal for a toddler. If we eat out I’ll usually pack something easy from his lunch options but he will typically eat whatever we eat at a restaurant as well. The only fast food place we eat is typically Chick-Fil-A and it’s the only place I’ve ever gotten Kye a meal. He LOVES the carrot, raisin, and pineapple salad! I’ve tried to make it at home but it doesn’t turn out right 🙁

Dessert: I’m not big on offering my child desserts. Zach and I typically eat a dessert at night once Kye’s in bed while we watch a show together so he doesn’t see us even eat the stuff. But if we have company or are eating out I will give him a bit of whatever dessert we are having. I don’t make a big deal about it or only give it to him if he finishes his food or something. Everything I have read says occasional treats are fine and if you don’t make a big deal about it then kids won’t think the dessert is “special” and that the regular (aka healthy) food is “yuck.” 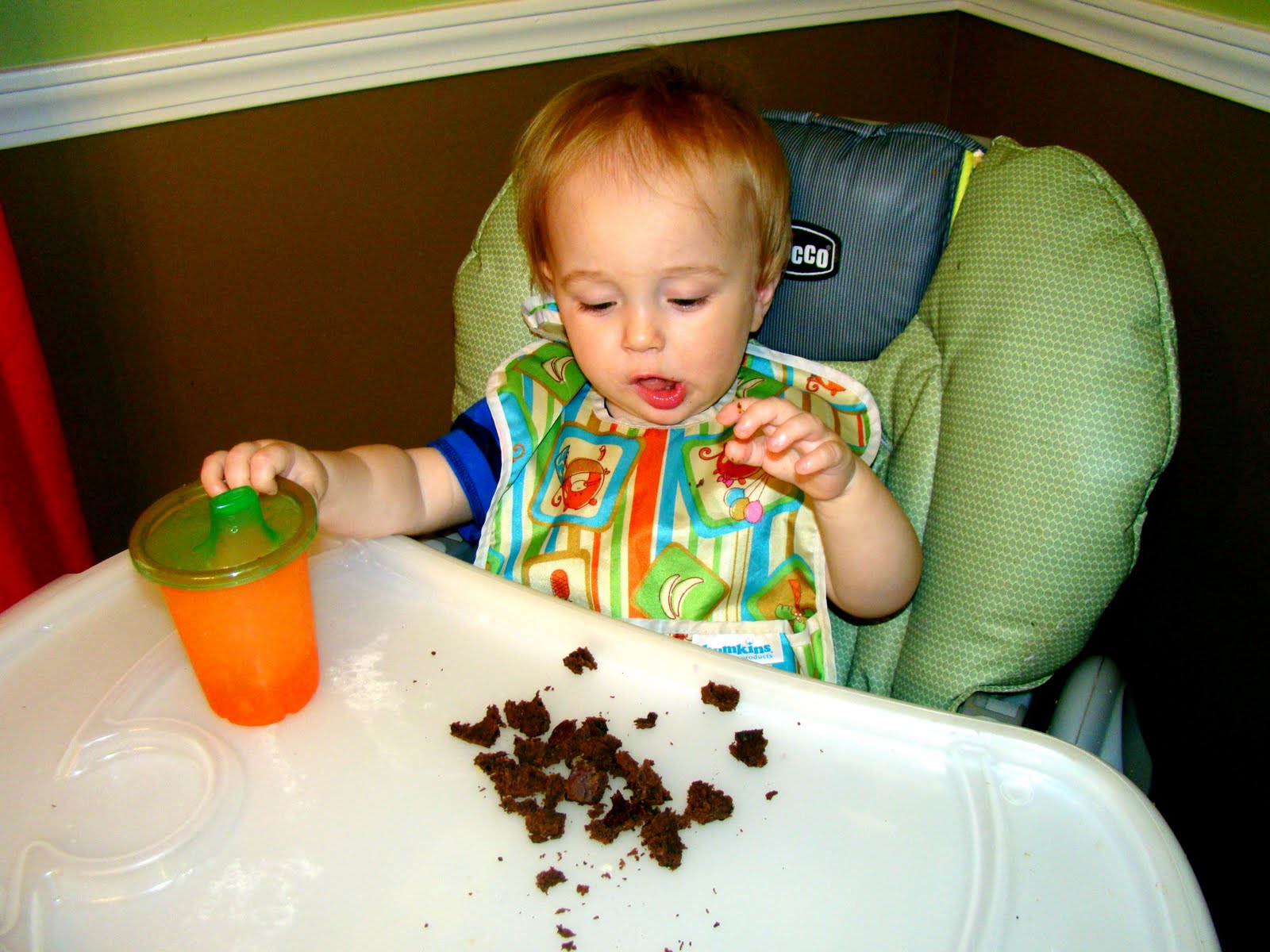 I know I am far from perfect with what I feed Kye but I feel content in the fact that I do my best. I plan on hunting down MANY more recipes for things I can make in order to “sneak in” healthy foods for him. I have found many but I, like I mentioned, prefer ones that I can make in advance and freeze so that makes things a little trickier. I hope that all of this will help some of you who are probably struggling with what to feed a toddler and I’m hoping that maybe some of you have some suggestions for things I haven’t thought of! Please share!!!

As I find more recipes I will be posting them at my sister blog, Tricks of the Mommy Trade. I’m also working on posting more recipes that I cook for the whole family too. I’m big on making things that are: quick, easy, cheap, and semi-nutritious. Again, I’d LOVE some suggestions 🙂