On the way to the epidural class last night I felt Clover hiccup for the first time! Yay! This was a very active child yesterday for sure!

We timed our trip to the hospital from our house and it will take us around 10 minutes to get there which is good to know because I hope to labor at home for as long as I can stand it.

When we got to the class I pulled a typical Emily-Student move and sat near the front. About a second after we sat down I heard “Emily, Emily.” Turn around and Kecia and her husband Ryan were sitting right behind us! I was so glad to see them!

It’s so neat that Kecia and I are due so close together. She’s due March 10th and I’m due the 12th! I love getting together with her and comparing notes on our pregnancies. Wouldn’t it be neat if we had them the same day? It’s funny because she starting showing a lot sooner than I did but I think I’ve caught up to her now!

The class was quick but I did learn a few things:

Not to knock South Georgia Medical Center but they are a pretty crappy hospital! haha! It seems like everything is some kind of protection from them being sued. They don’t let you video tape the delivery because they don’t want anything on tape, they don’t let anyone but the patient and one nurse in the room when giving the epidural, they don’t give any birthing options other than the standard one. It’s annoying.

At the end of the class he gave us the opportunity to look at the needle and I wasn’t going to do it but then Zach saw it and said it wasn’t half as bad as he was expecting so I thought I should! And it really wasn’t that big of deal! We both were expecting something the size (length and diameter) of a pencil or McDonald’s straw! 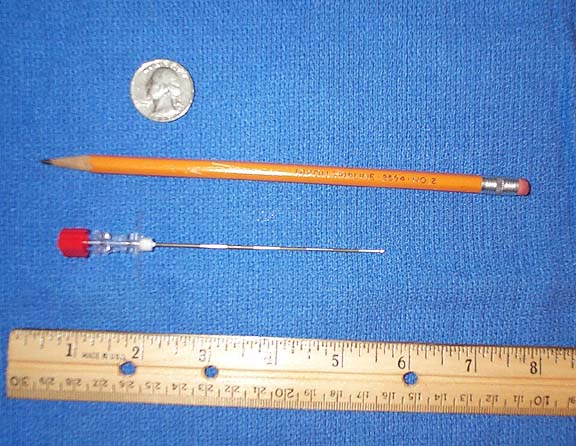 The needle he said he usually uses was even smaller than this! SO not that big of a deal. Plus they administer an IV of demerol before and numb the skin where they put the needle in so I think I can survive it!

The best news to me of the night was finding out they can give you the epidural up to 8 cm dilated. I really, really want to labor at home for as long as possible and Courtney had told me they can’t give the epidural past 6 cm so an extra two cm is awesome!

However, I’m not even sure yet if I will get an epidural or not. Zach and I talked about it and the way I deal with pain and such is that I just want to get it over with as fast as possible. Like if I’m helping him move heavy furniture (pre-pregnancy of course) he’ll ask if I want a break and I’m like “no no no just do it.” I’d rather it hurt and get it over with than prolong it and I’ve heard that epidurals can really prolong labor because I could be too numb to feel my body’s natural urge to push.

If it was up to me, I’d have an all natural water birth. I think they are awesome and it’s so cool how the baby comes out CLEAN. But, again awesome Valdosta, it’s not an option. So we’ll see how I feel the day of. I’m not against an epidural by any means but I figure I’ll stay home as long as I can stand it, get the demerol (which I get knocked out by DAY-quill so I’d imagine it will have a pretty significant effect!), then decide what to do from there.

I know people reading this think I’m nuts for even considering not getting an epidural but I just think it’ll be so cool to really experience child birth and feel that natural urge to push my baby out when she or he is ready! I am about 85% sure I’ll end up getting the epidural but that 15% might win out who knows!